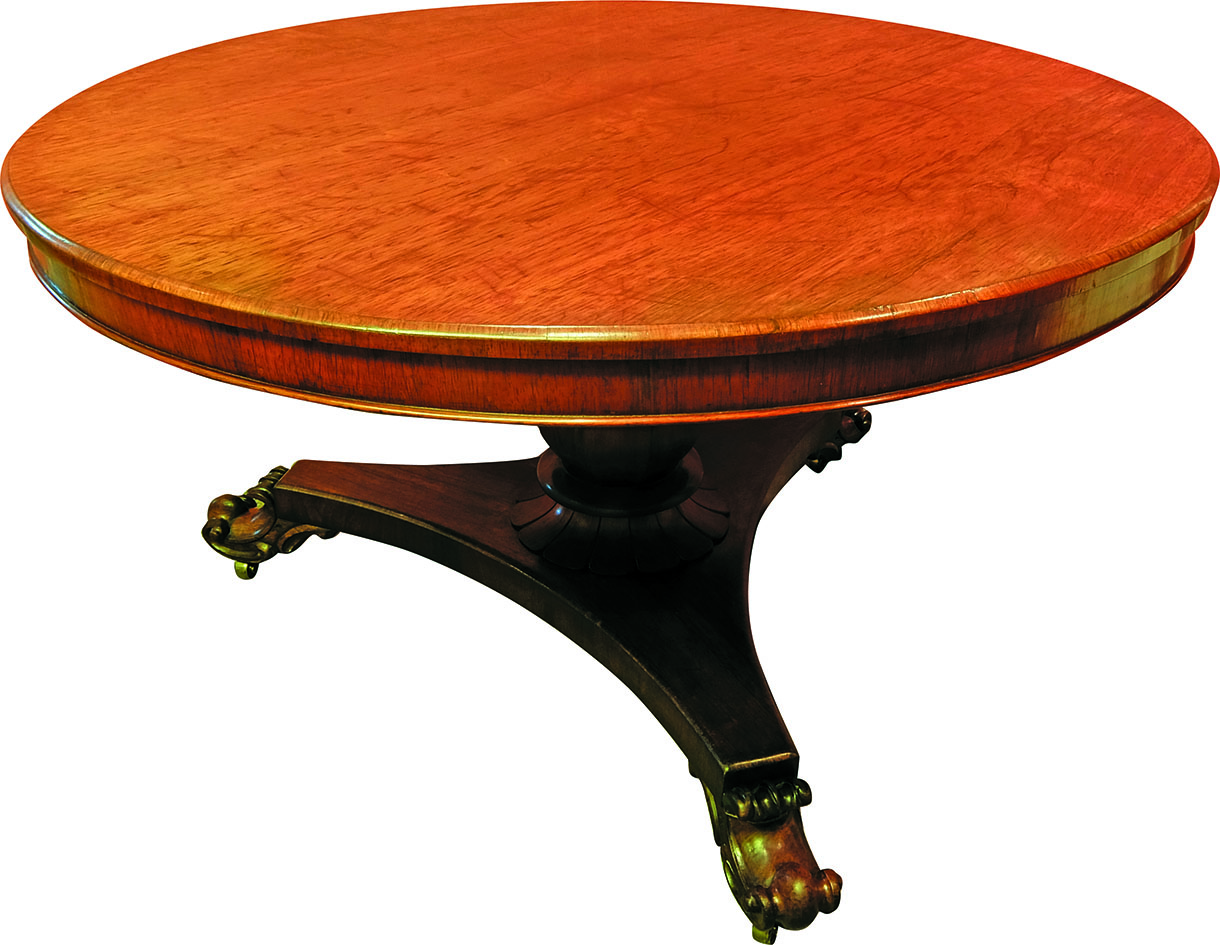 I have several clients who prefer antique furniture and this rosewood table came in from one of them. Dating from the Regency period circa 1810–30, the table has an octagonal baluster with a tricorn base on carved feet and castors. With a tilt top they are sometimes referred to as breakfast tables and other times as centre tables.

Assessment
• Small sections of veneer were missing from the base.
• The top, when down, was not stable and when tilted up it dropped down under the weight.
• The table-clip had been badly repaired and was in need of restoration; because of the bad repair it was not clipping in to the base properly.
• The threaded plates for the table screws were badly worn, which caused the top to drop down and be unstable.
• Small sections of veneer were missing from the underside of the rim. • Sections of veneer were missing from the pedestal’s top block.
•The castors needed to be replaced.
• The top had been badly scratched.
• The original castors had at some point been removed. clients asked if anything could be done with the scratched top but after discussion we decided to leave it alone. Firstly, doing anything to the colour/patina would devalue the table and, secondly, touch it and it will go back to the dark rich colour of freshly cut rosewood (Dalbergia spp.). 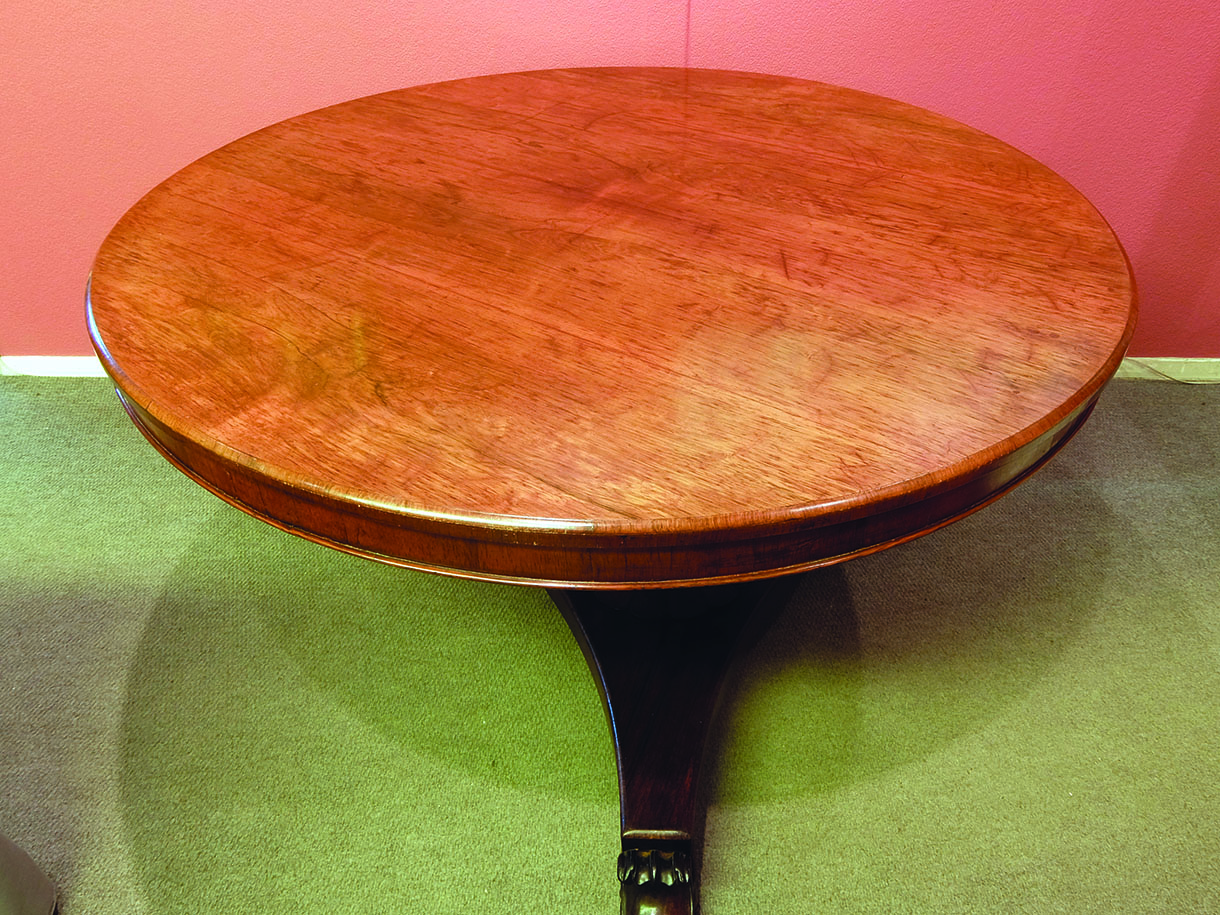 The table top had several scratches 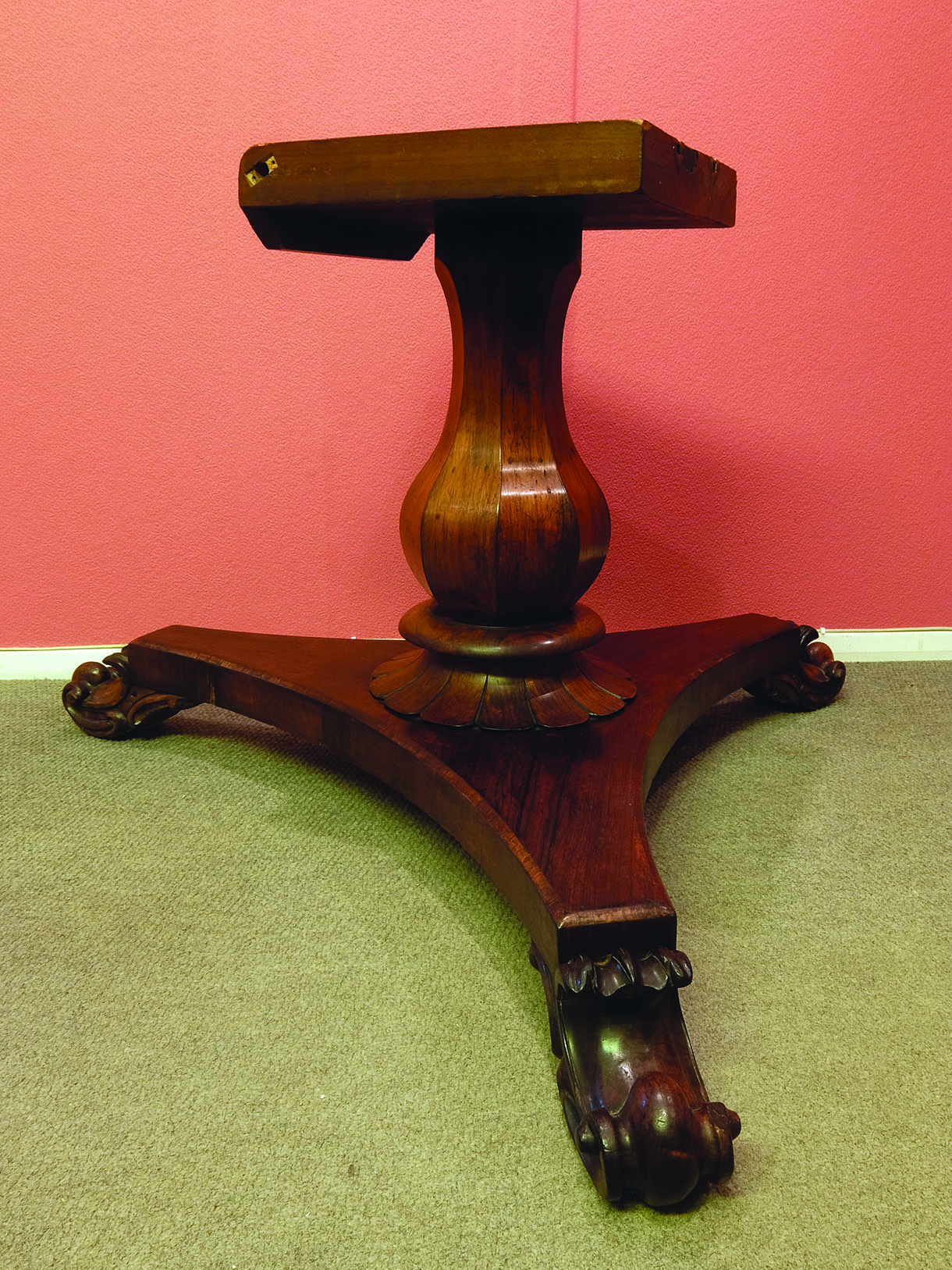 The Regency breakfast table has a tricorn base 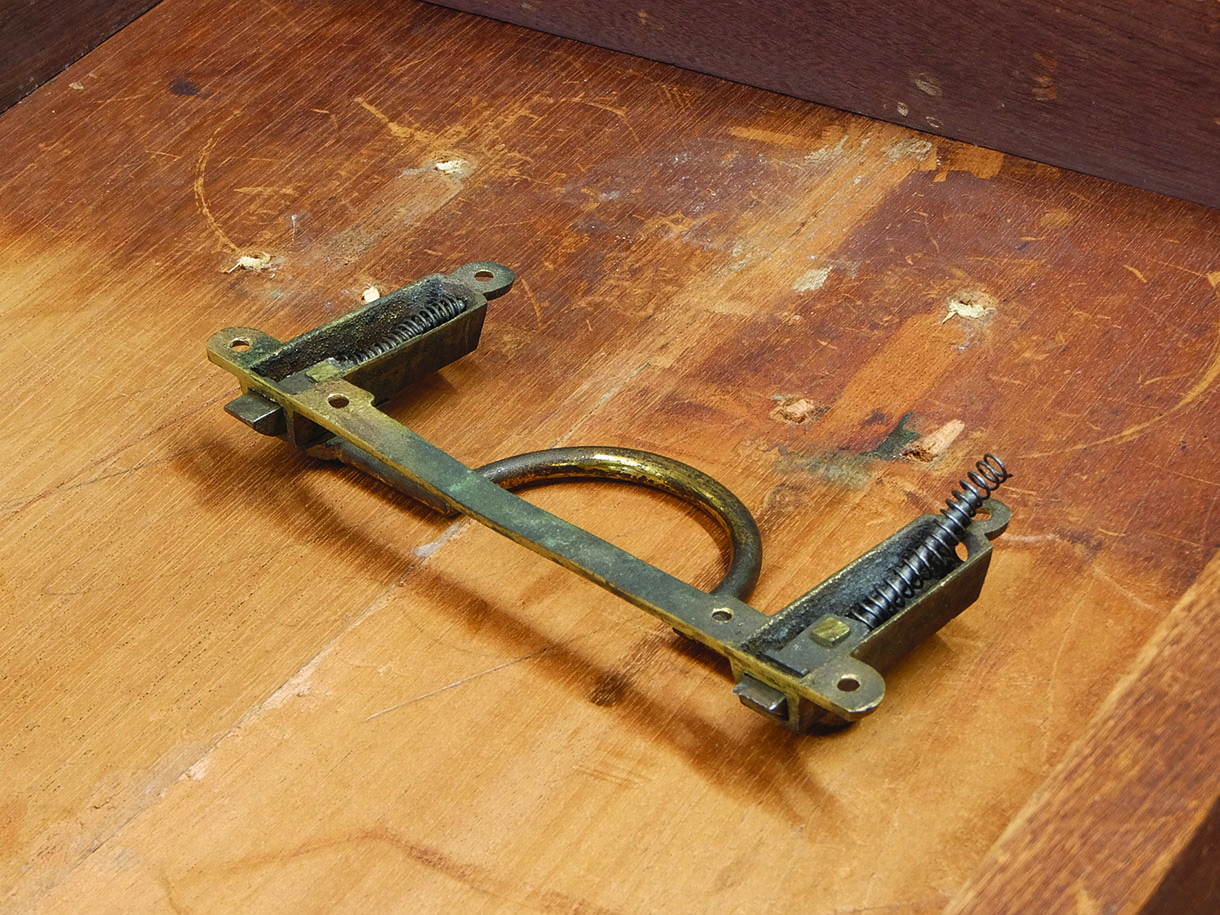 1. The table catch and table screw plates were in need of restoration and in order for them to be repaired/replaced they were removed so they could be sent away for assessment and repair 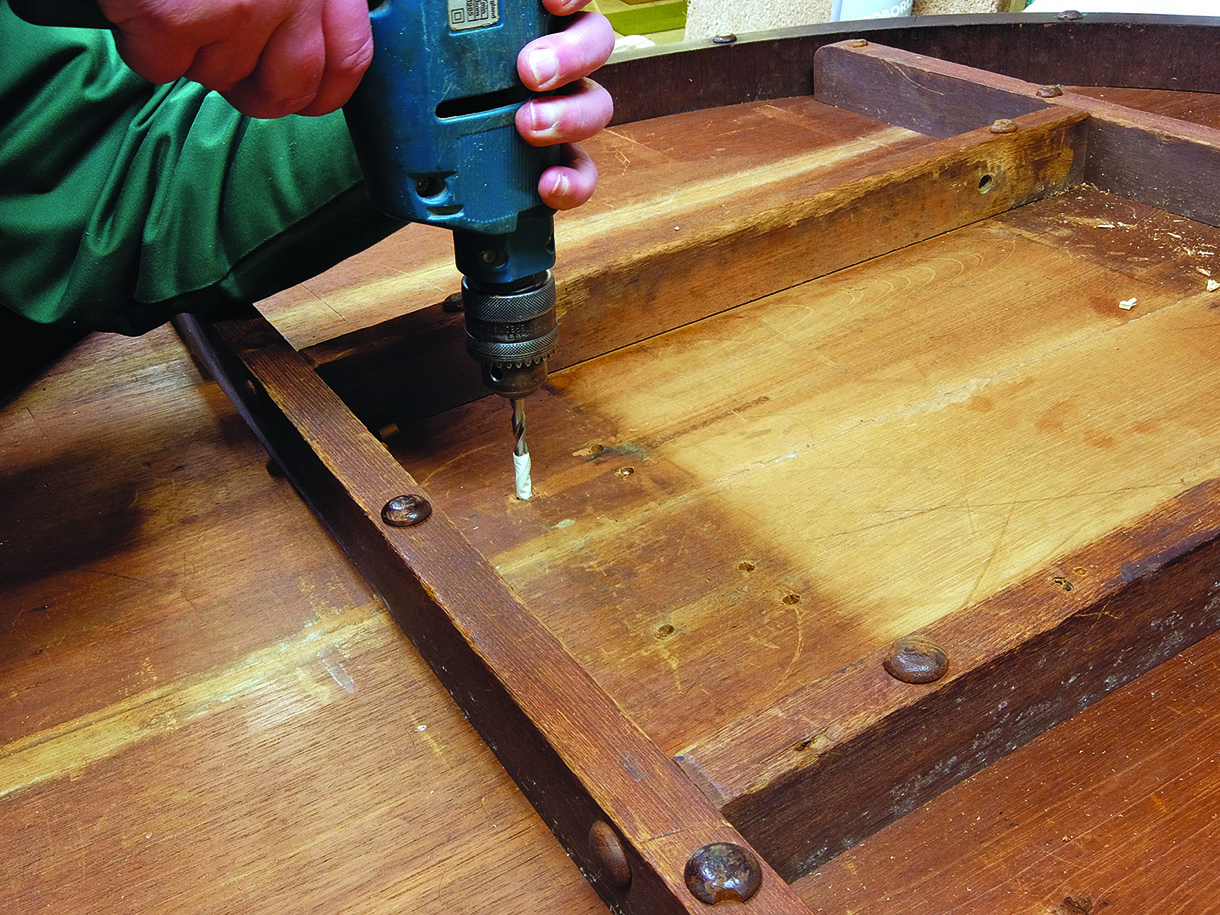 2. With the table catch removed the worn screw holes were drilled out. I marked the depth required with
some tape around the drill bit, then glued and plugged them with timber. Once dry, they were levelled off ready for the catch to be re-fitted 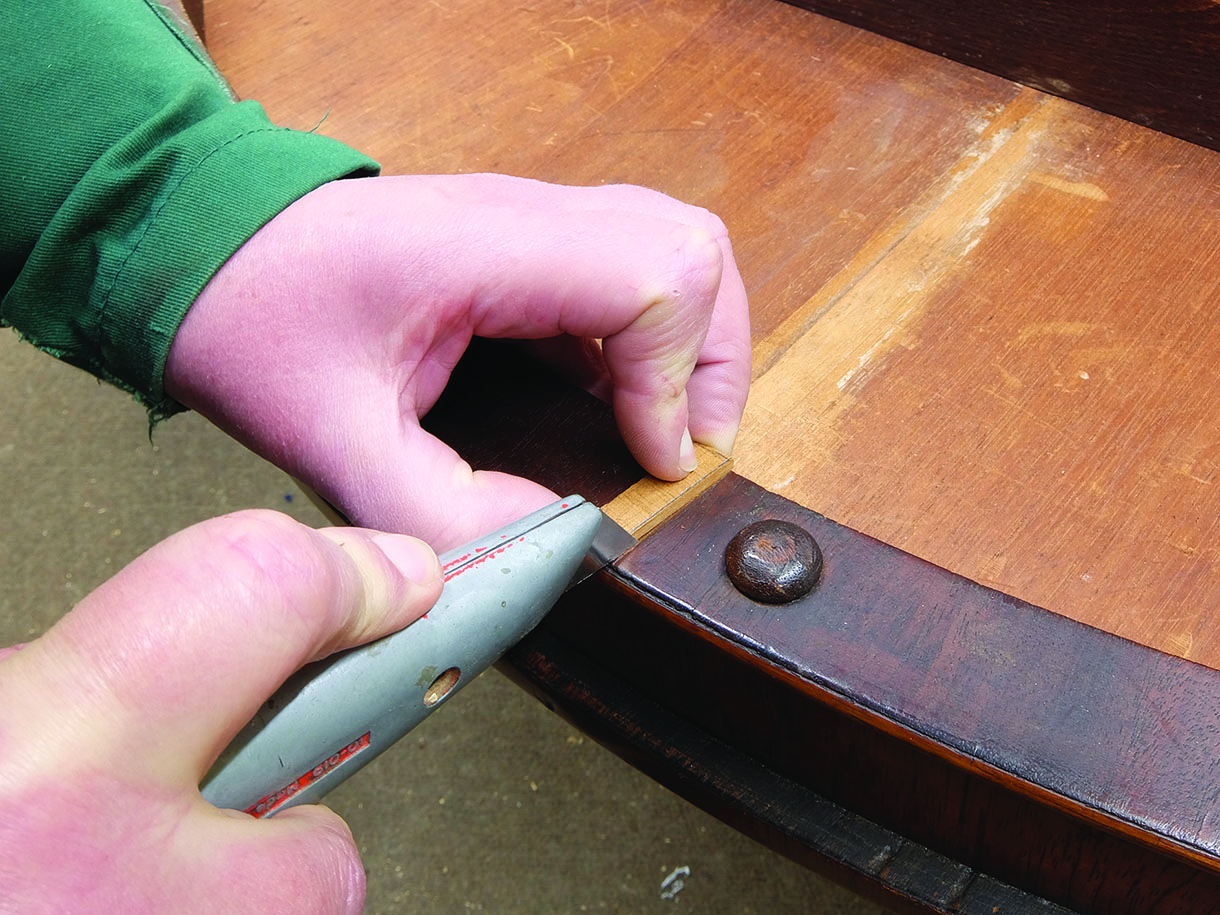 3. On the underside of the table rim the veneers were replaced cutting a joint across the width of the rim. This makes for a far neater repair and is less visible than trying to cut in a small triangle. I prepared a thin section of old mahogany (Plathymenia reticulata) and cut its position into the rim using a knife 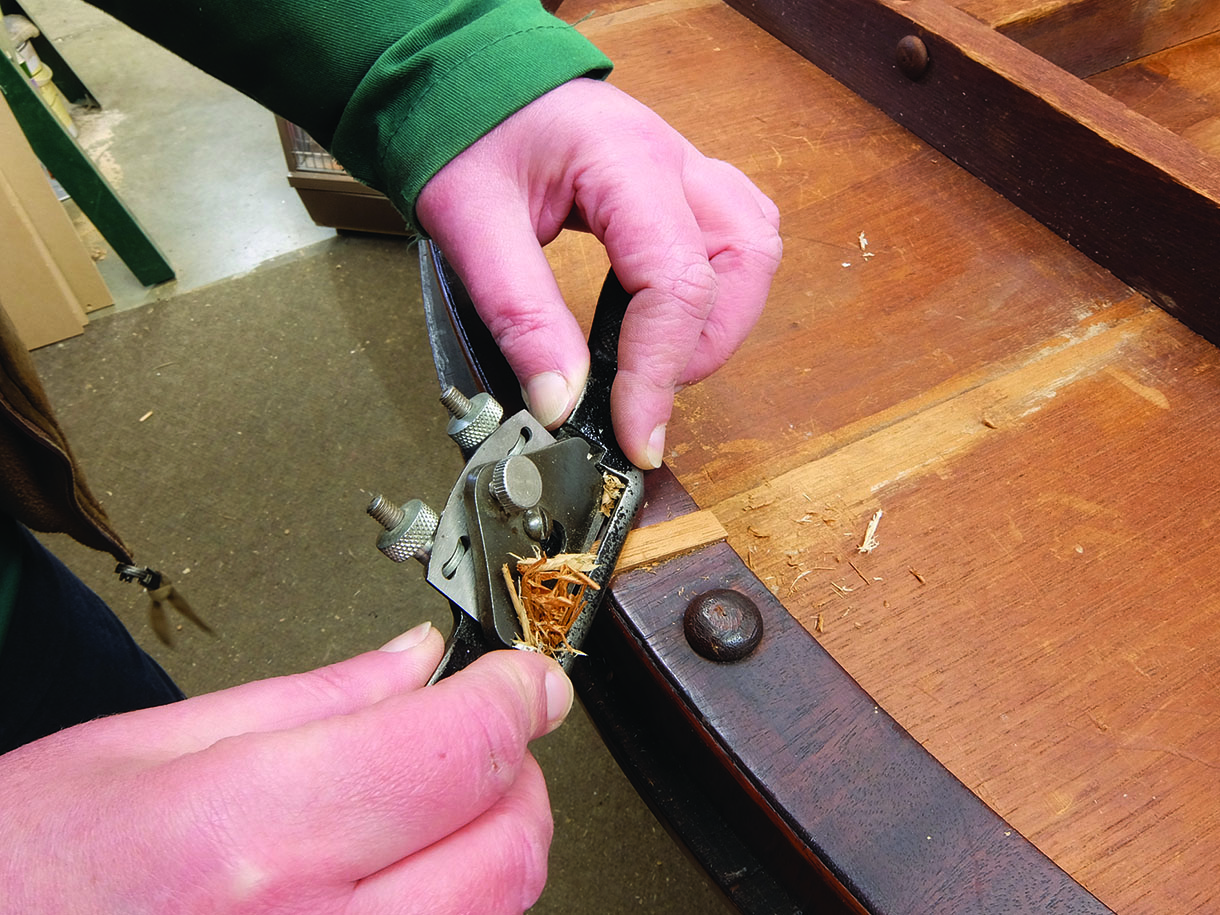 4. The piece was fitted into the rim using a chisel and glued into position with animal/hide glue. When dry the piece was levelled off using a spokeshave. Where the joints in the top had been glued there was old glue spread either side of the joints. As the underside is visible when tilted up these areas were cleaned up at the same time 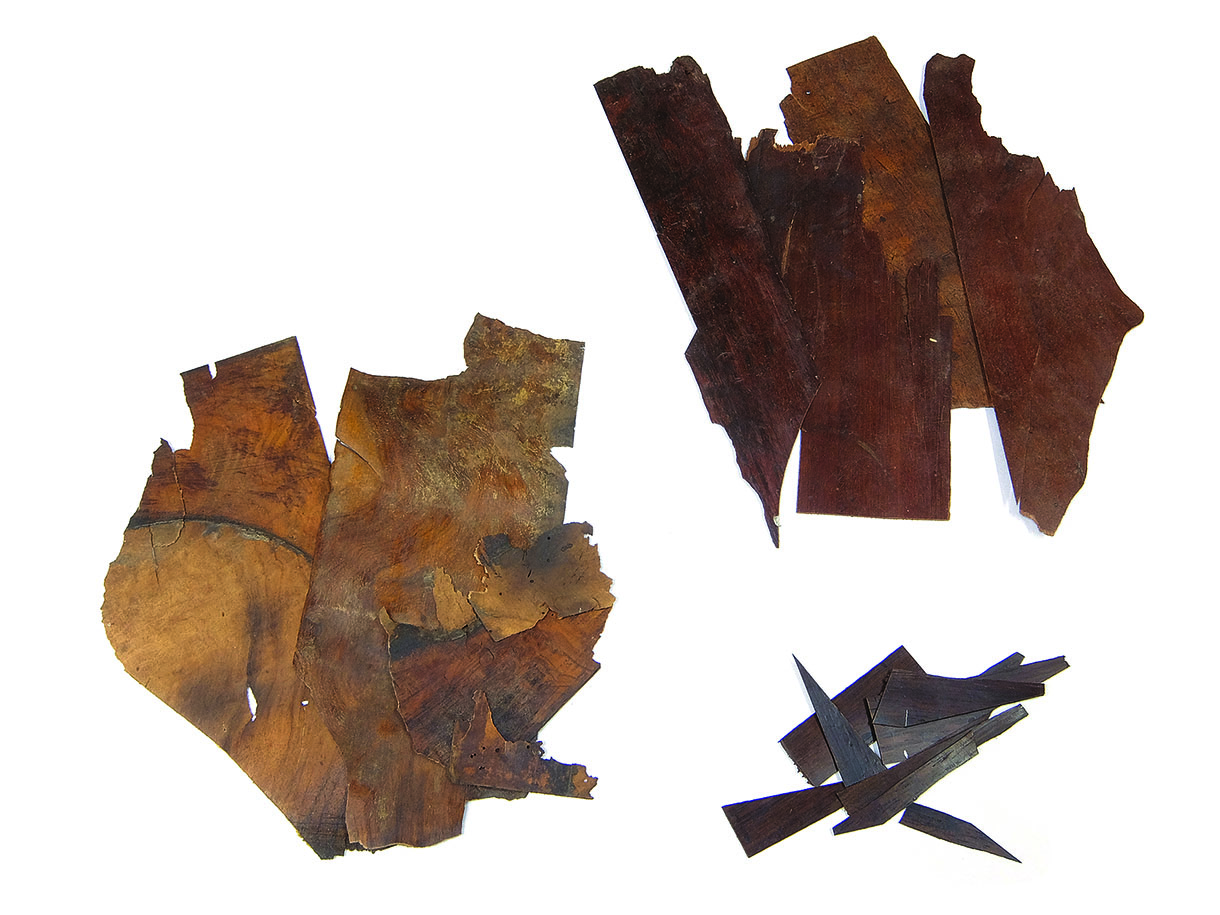 5. When replacing missing veneers, it is best to use old veneers if at all possible. These veneers are usually stripped off old furniture or boxes that are past repair and are not of great monetary or historical value. For the base, I replaced the missing veneers with old rosewood veneers. Like the ones on the table, these will have mellowed over the years so that the colours should be very similar. They were fitted flush to the surface to keep cleaning up to a minimum. Rosewood will go very dark if the aged surface is disturbed 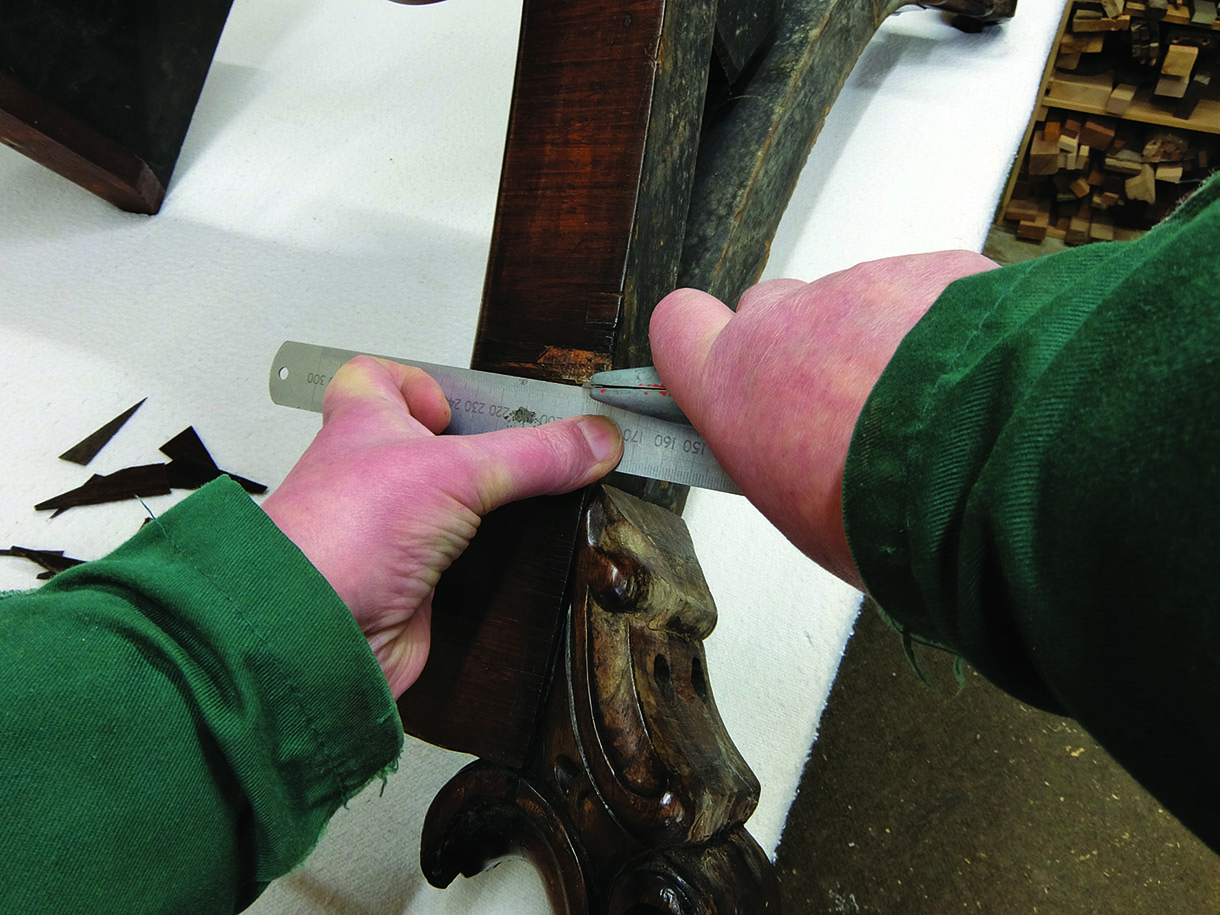 6. As with the mahogany pieces, I cleaned out and cut in the pieces of old rosewood veneer, cutting the ground in deeper where necessary to keep the surfaces flush 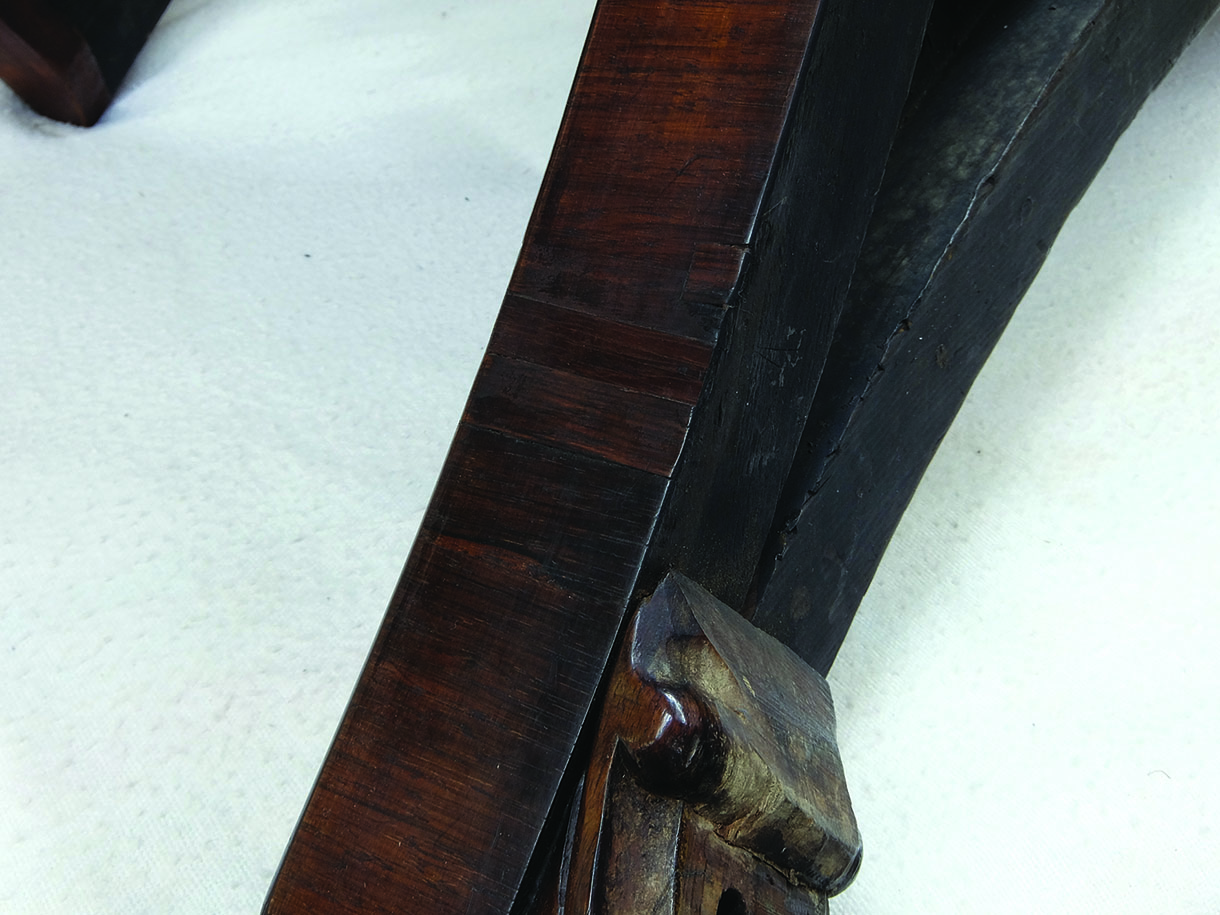 7. The veneers were glued and taped in position and when dry, very little cleaning up was required 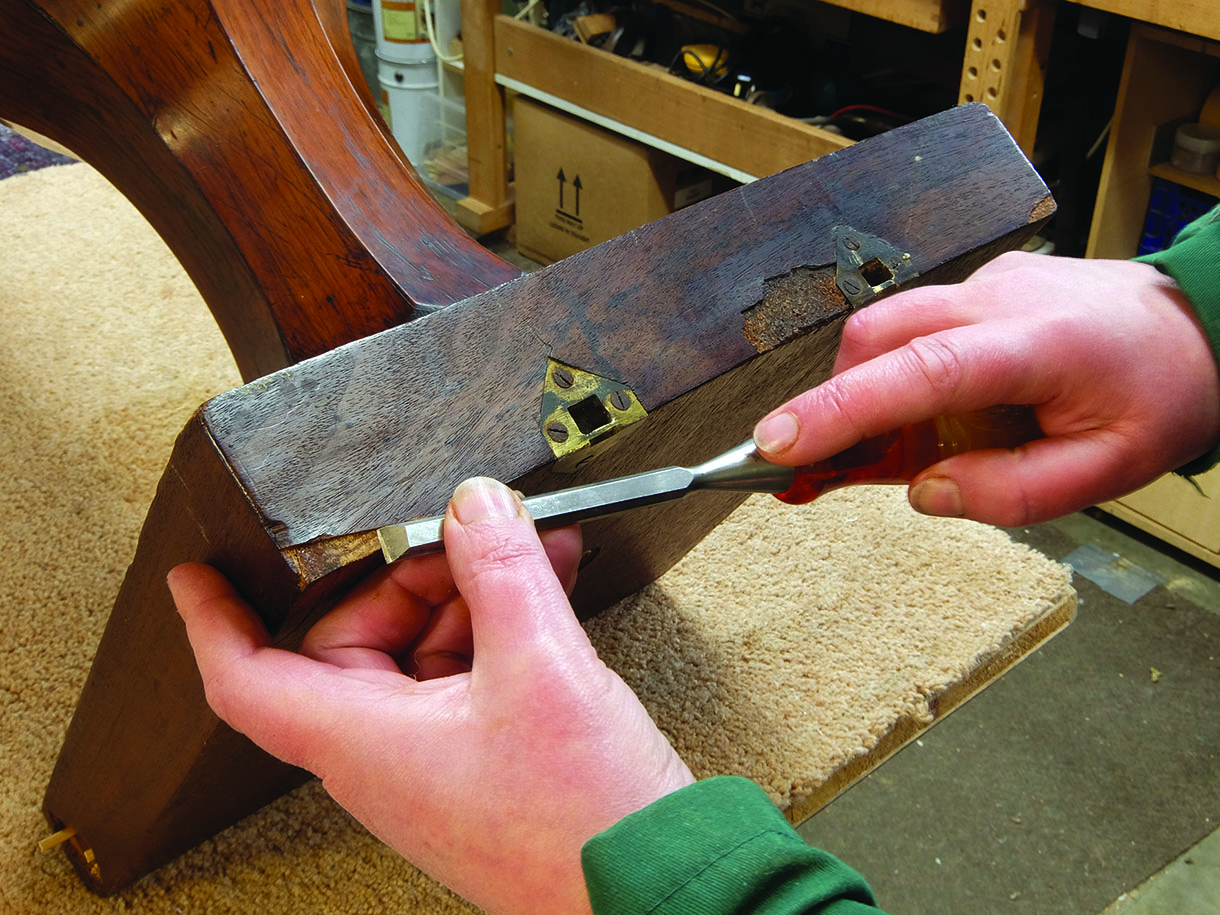 8. With the top tilted up, the veneer damage to the lead edge of the pedestal top block could be clearly seen. As before with the underside of the rim, sections of mahagony veneer were cut in. On corners I tend to cut long joints which will help to lose the joint when staining and polishing. The section of veneer is cut first, held in position and marked with a knife and then cleaned up to the joint line with a chisel 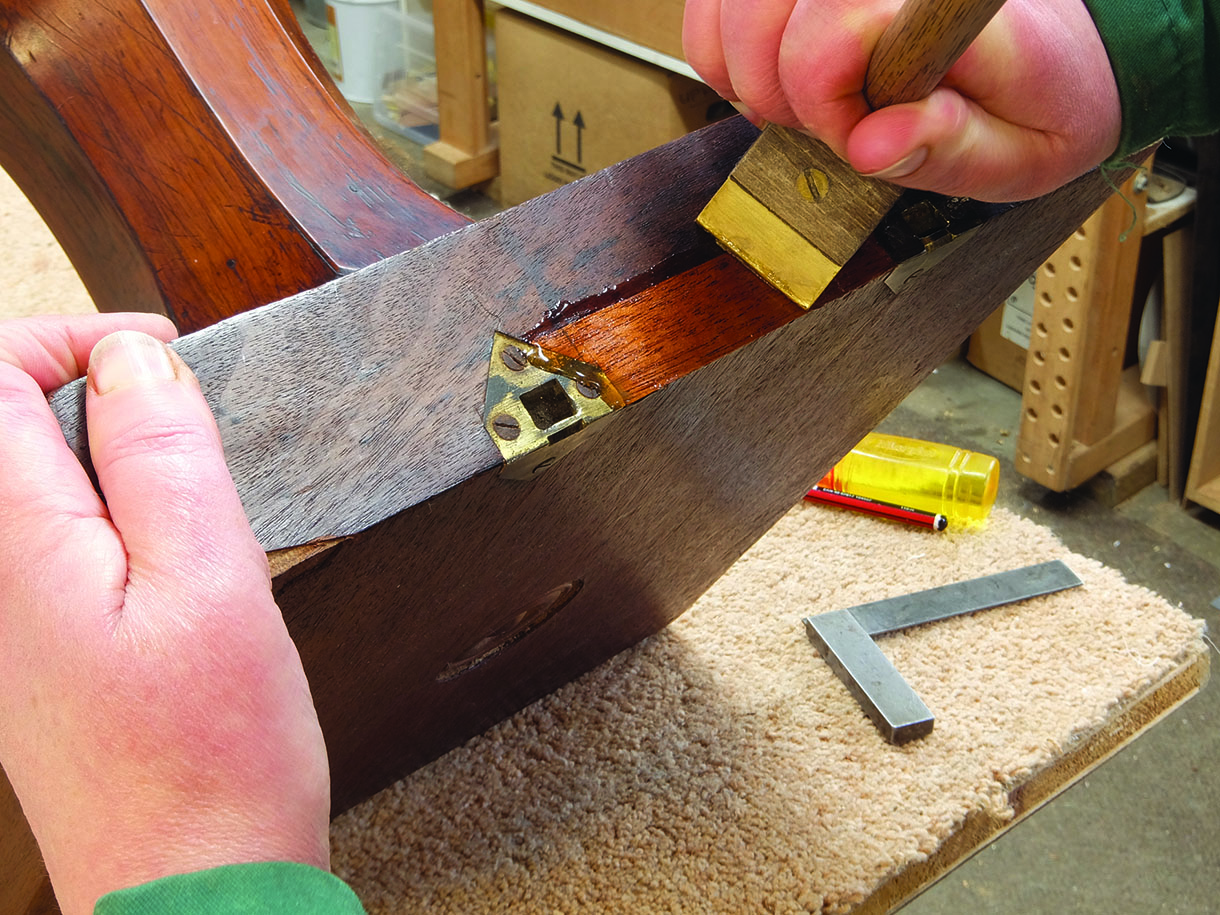 9. I cut a long joint for the section between the two table-clip keeps. The veneer was fitted in the same way and then all pieces were glued into place. A veneer hammer was used where required to remove any excess glue and the joints were taped with veneer tape to keep them tight 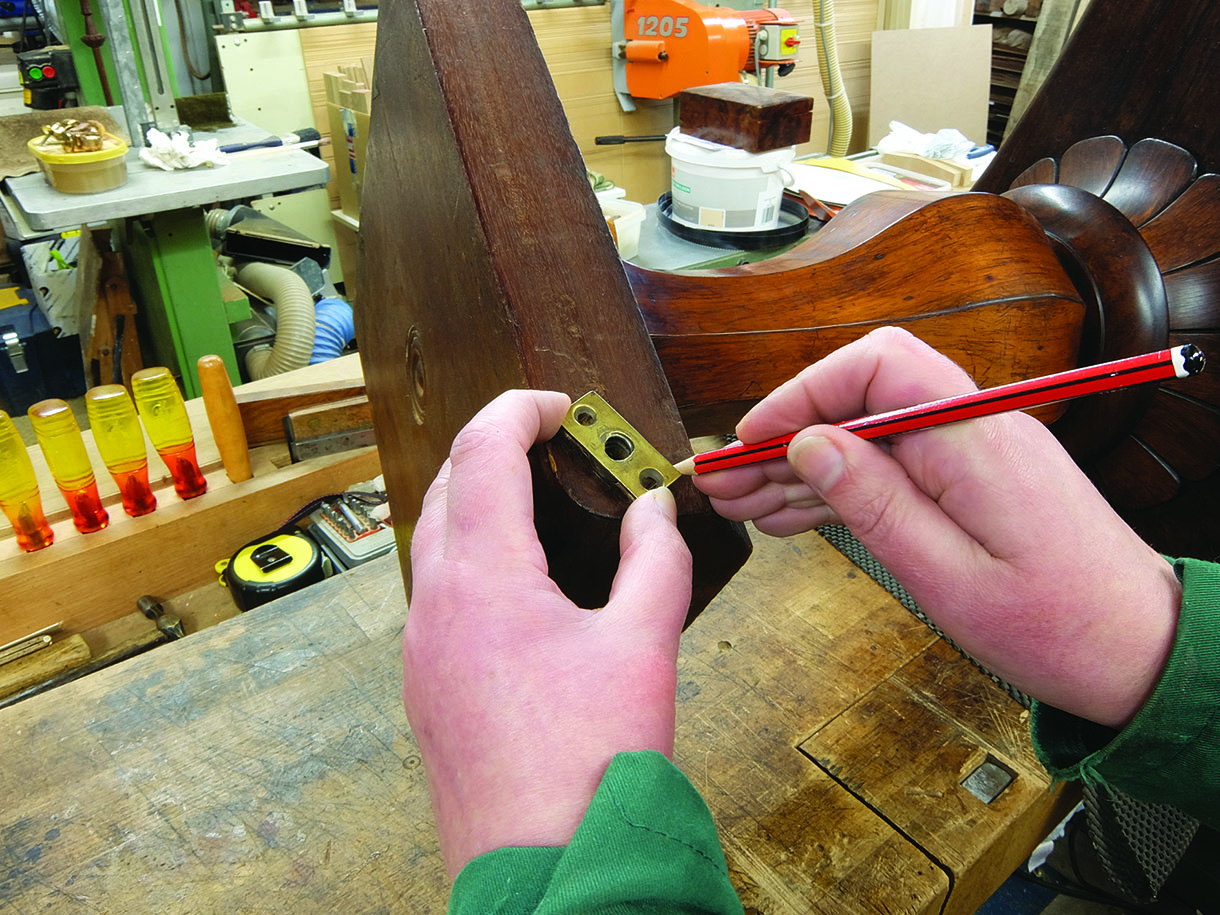 10. The replica table screw plates were a little longer than the originals so I marked around the new plate keeping in line with the old recess as much as possible. I lined up the position of the threaded hole in the plate with the hole in the pedestal top block as this keeps the swivel point of the tilt top in the right place. You can insert the table screw but I find it can get in the way 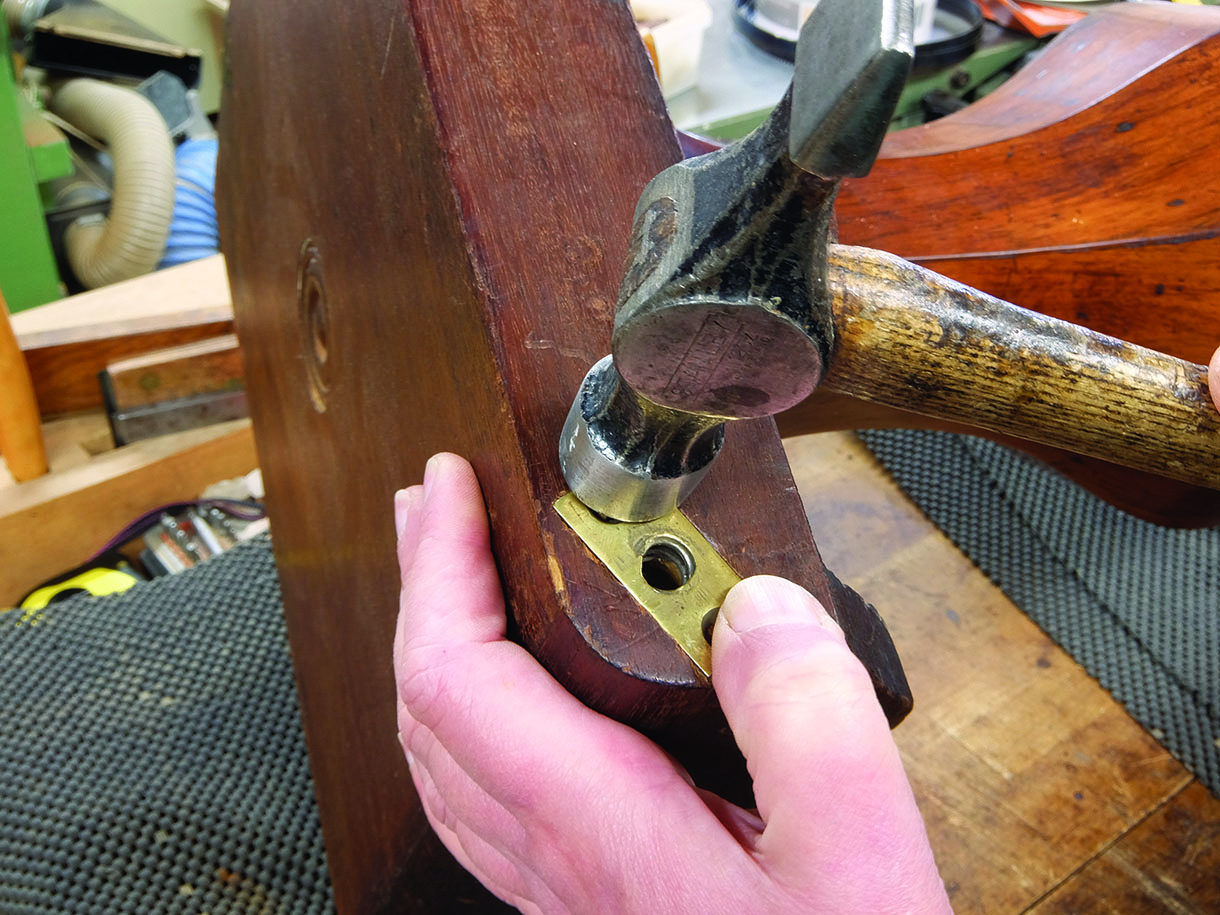 11. A chisel and mallet was then used to recut the recess, making sure the table base was sitting securely while this was done. With the recess altered, I trial fitted the plate for a tight fit in the block 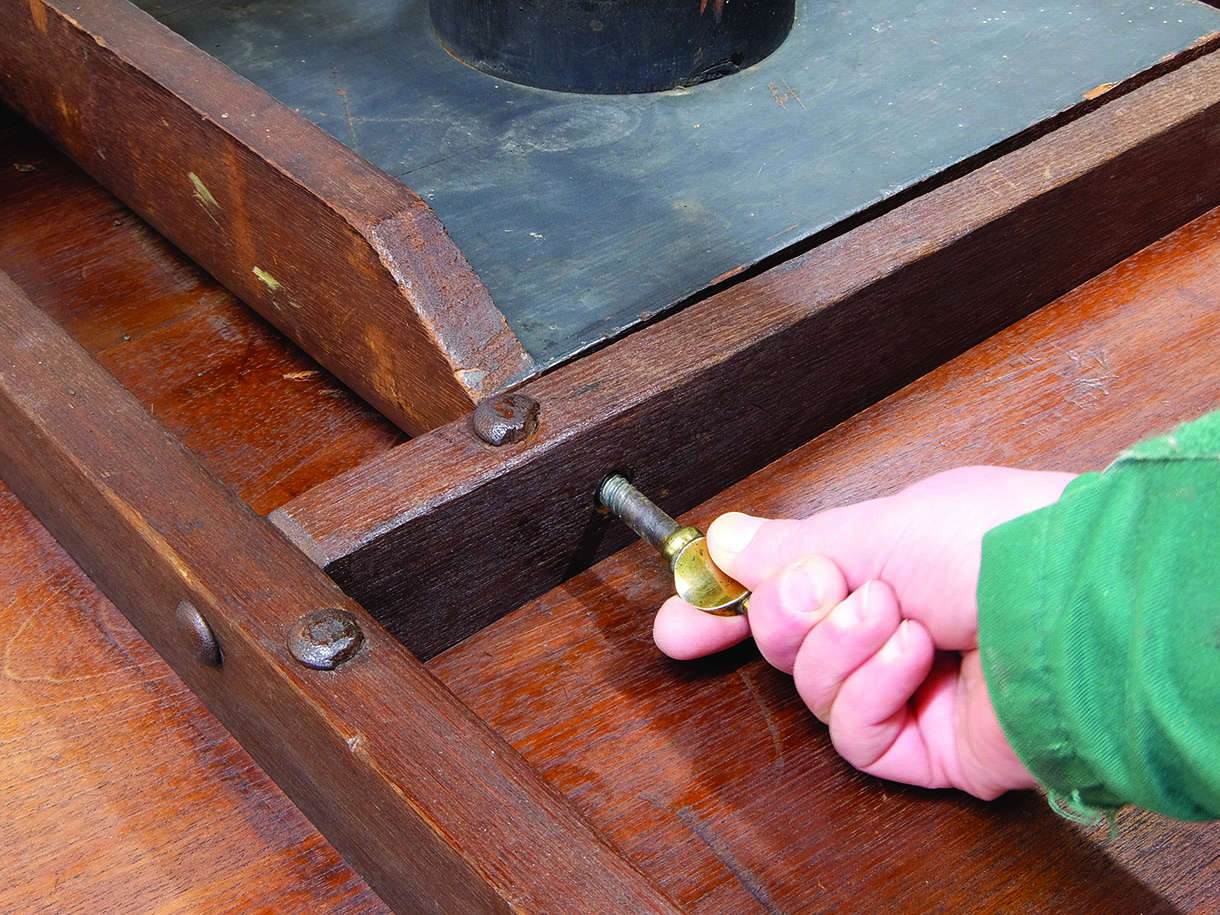 12. At this stage any further adjustments can be made before screwing the plates in place. The table top and pedestal were brought together and the table screws fitted in position 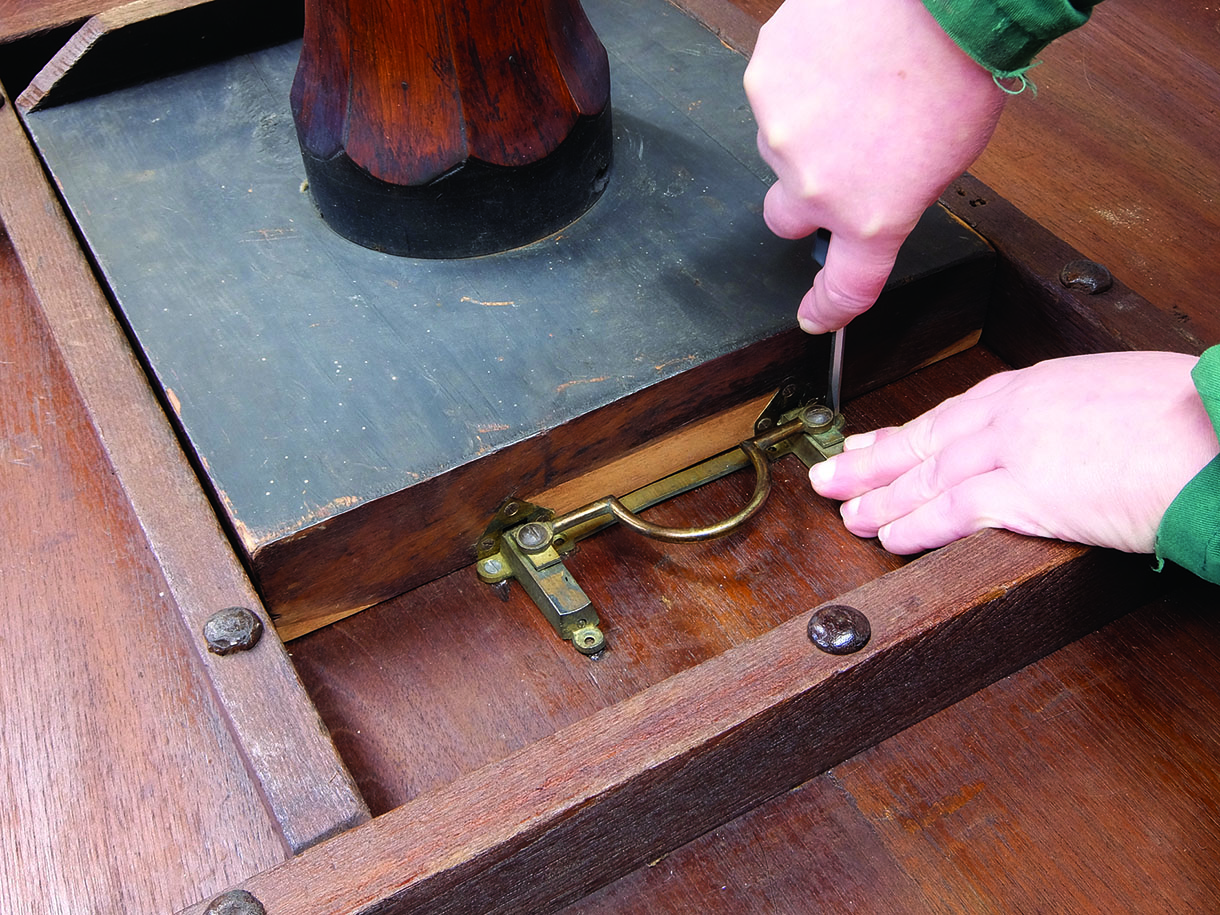 13. Next, the table-clip was re-fitted to the top. The clip was lined up with the keeps and positioned as close to the block as possible. One screw was inserted on each side to check whether the clip pulls back enough to release the top while clipping back in place when the top is brought down 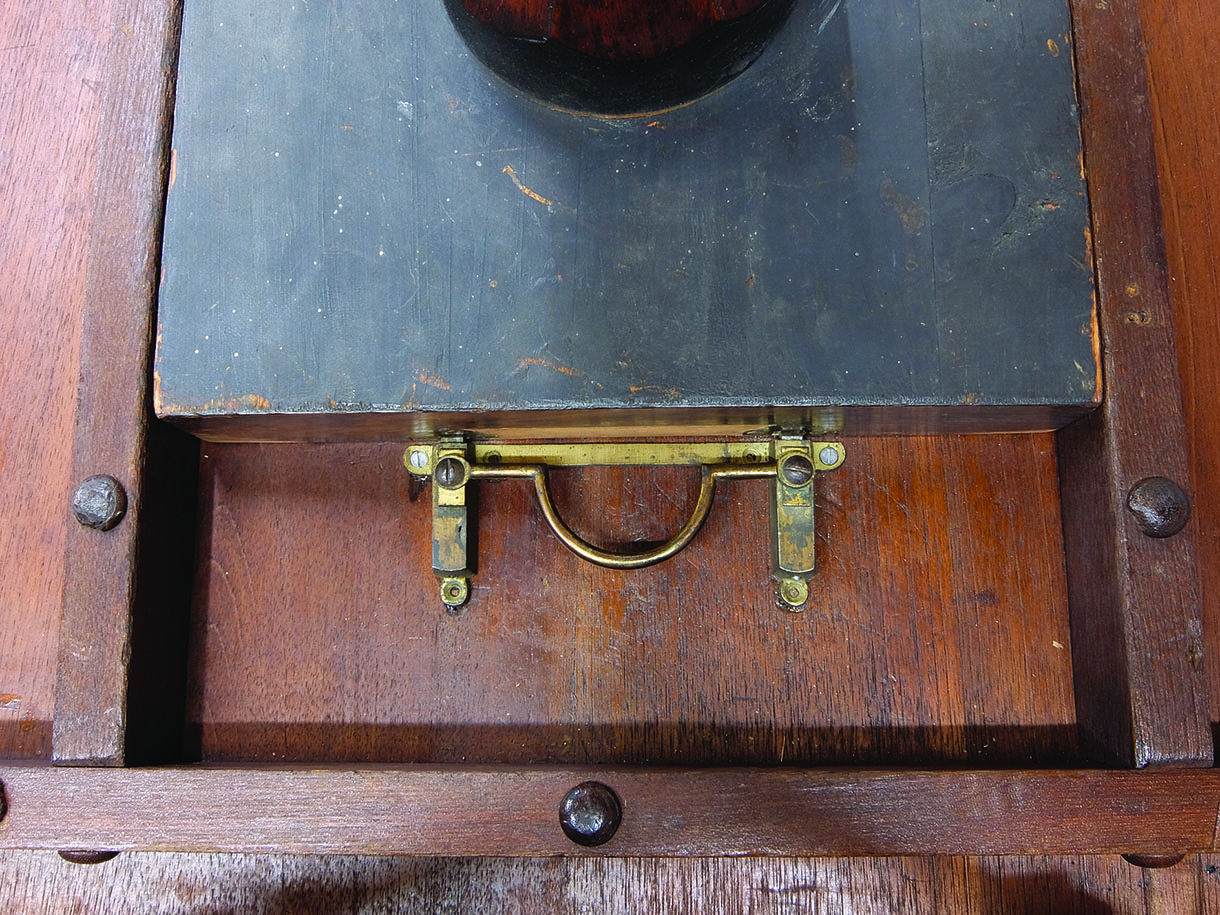 14. I filed the edges of the keeps using a small needle file to make the final adjustments. The remaining screws were fitted which should leave the top firmly locked to the pedestal with no movement 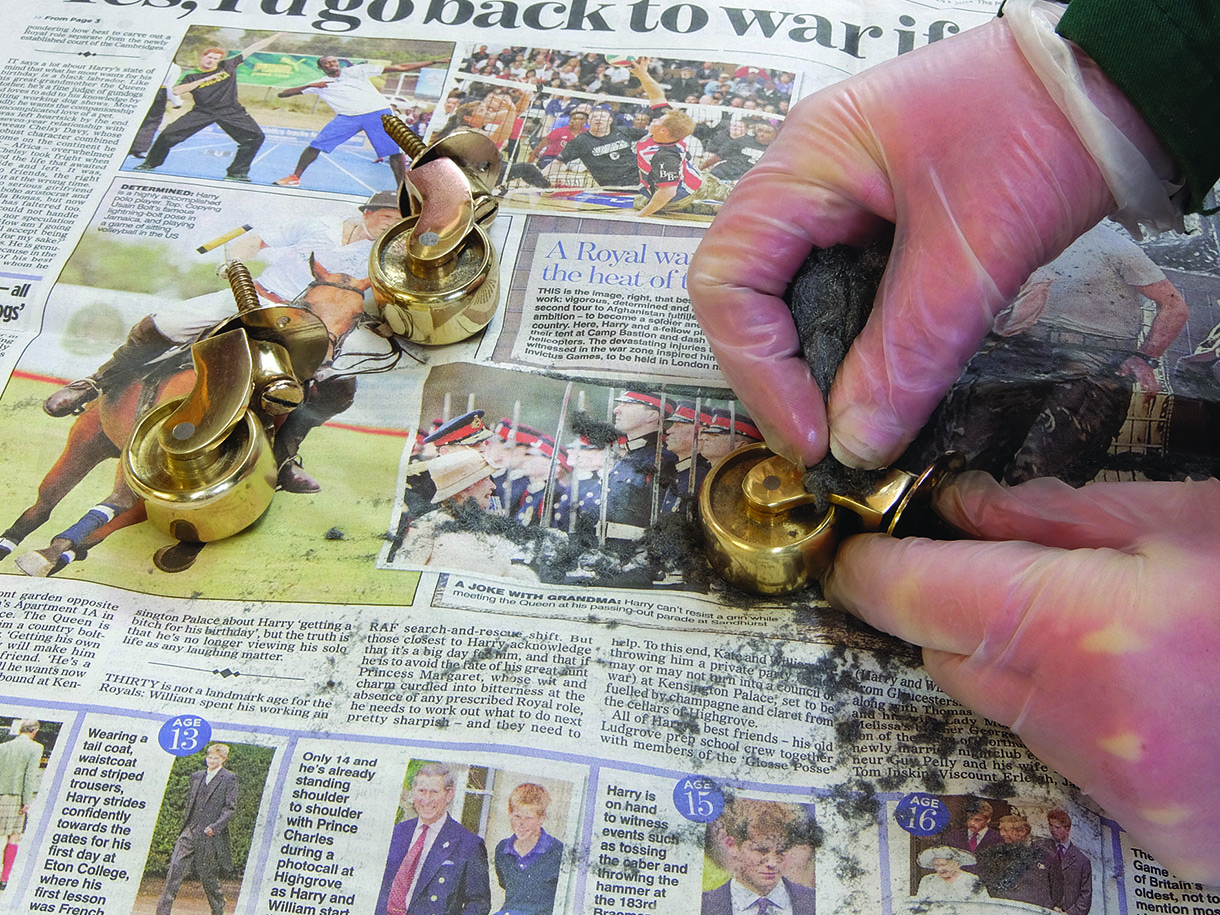 15. The only evidence of the original castors were a main threaded hole for the screw and three screw holes for the plate. I purchased some new castors, as the company that repaired the table screw plates and clip did not have screw plate castors. To start with I needed to antique the castors, which required the lacquer removed first. Having placed the castors in a container of paint stripper, cleaned off the debris and neutralised them with methylated spirits I further cleaned them using a solution of equal parts citric acid (lemon juice), acetic acid (vinegar) and salt and 0000 wire wool. When working with these substances, gloves, eye and fume protection must be worn at all times, firstly because of the stripper, etc., and secondly, the gloves will avoid any finger marks showing on the castors 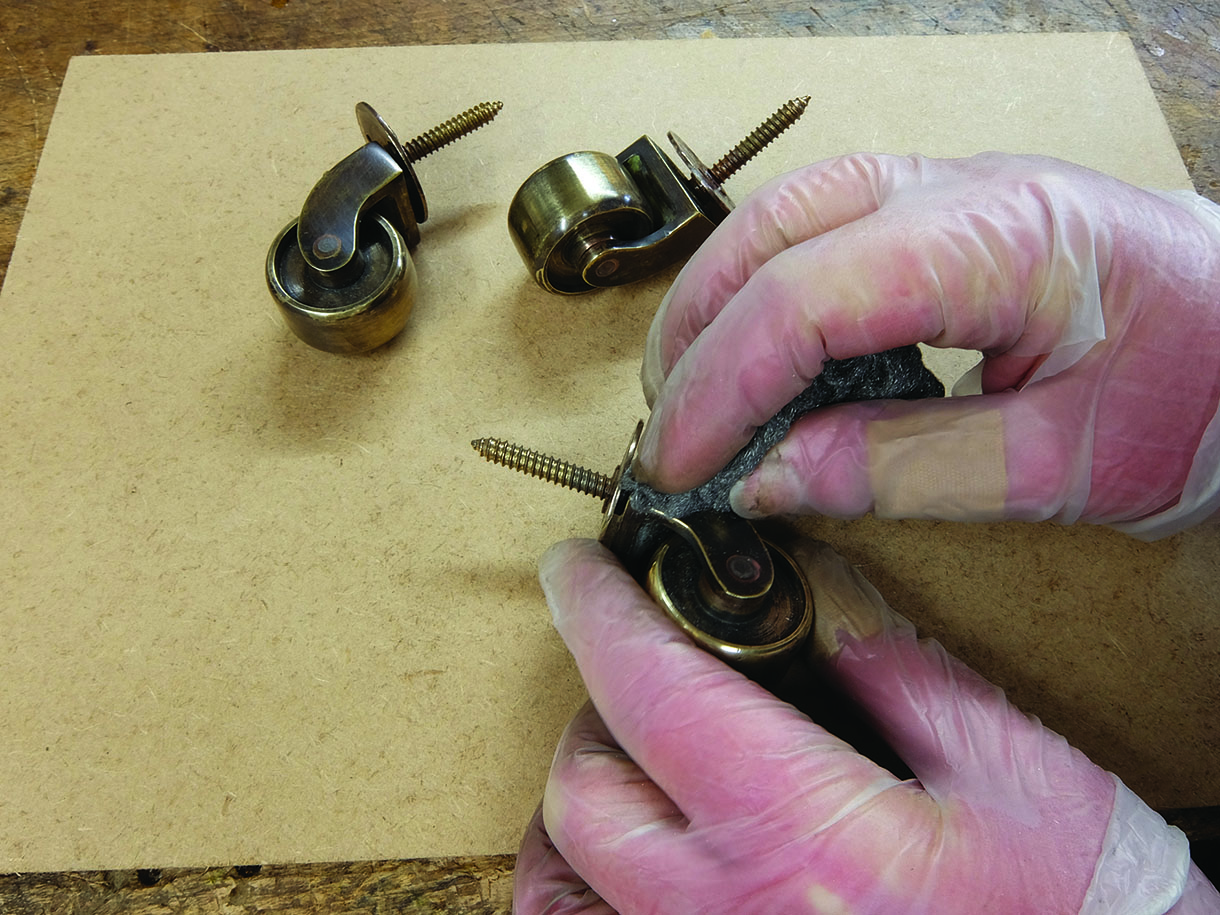 16. Having immersed the castors in antiquing fluid they were neutralised with cold water and when dry, highlighted to look more naturally worn using 0000 wire wool. They were then coated in jade oil to fix the antiquing fluid 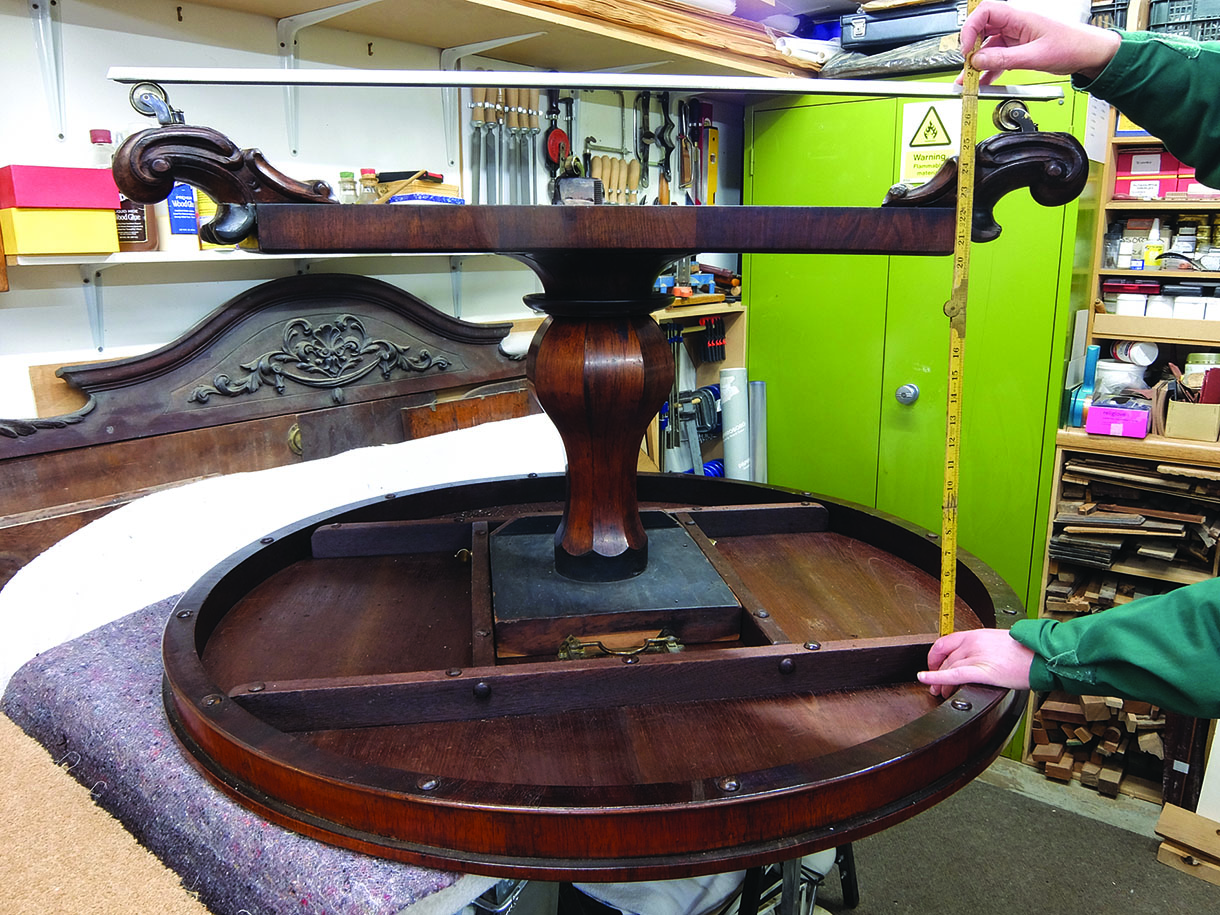 17. The castors were inserted in position and the height was measured at each castor using a straightedge. The table needed to be levelled due to movement in the tricorn base, so I had to recess the castors into the feet 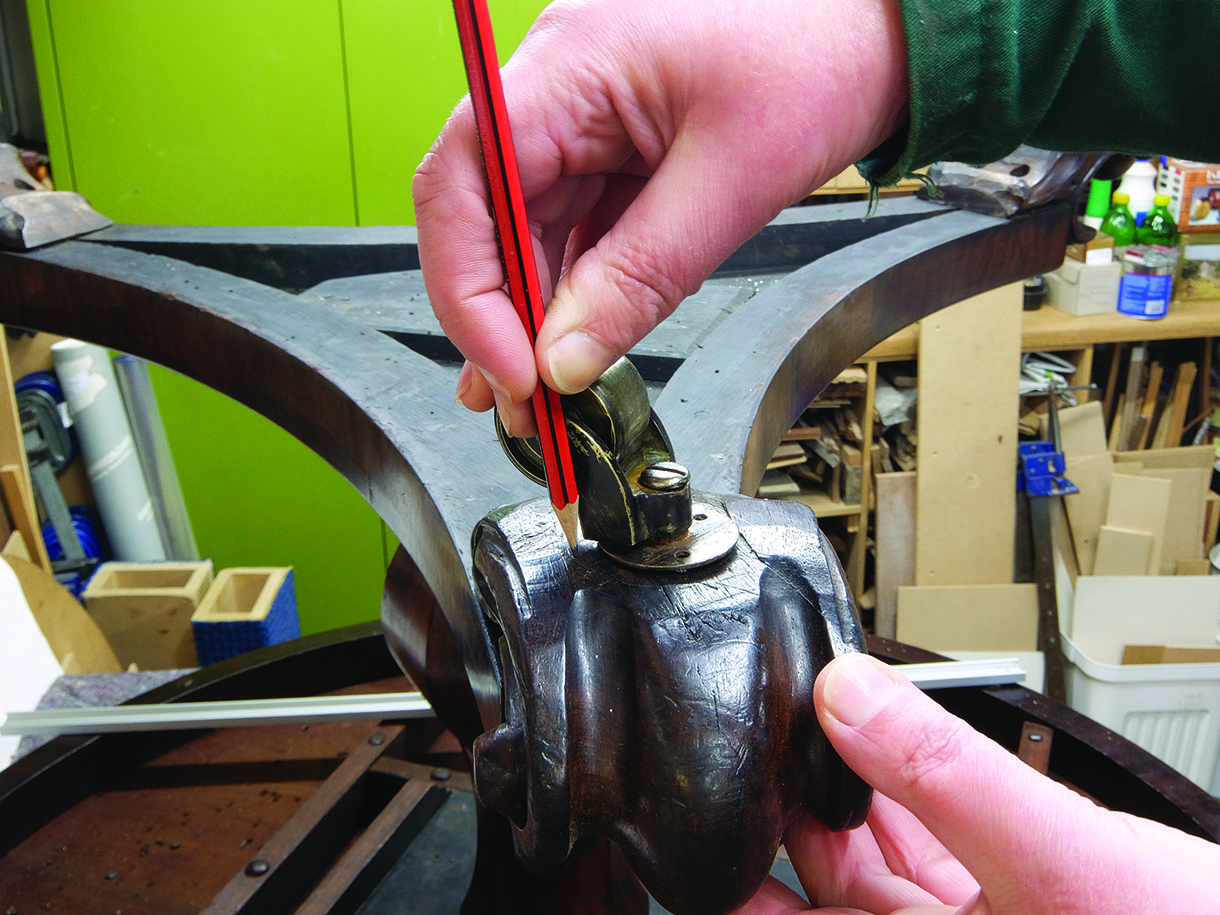 18. I marked a circle for each castor that needed to be recessed, allowing clearance for the section that holds the wheel 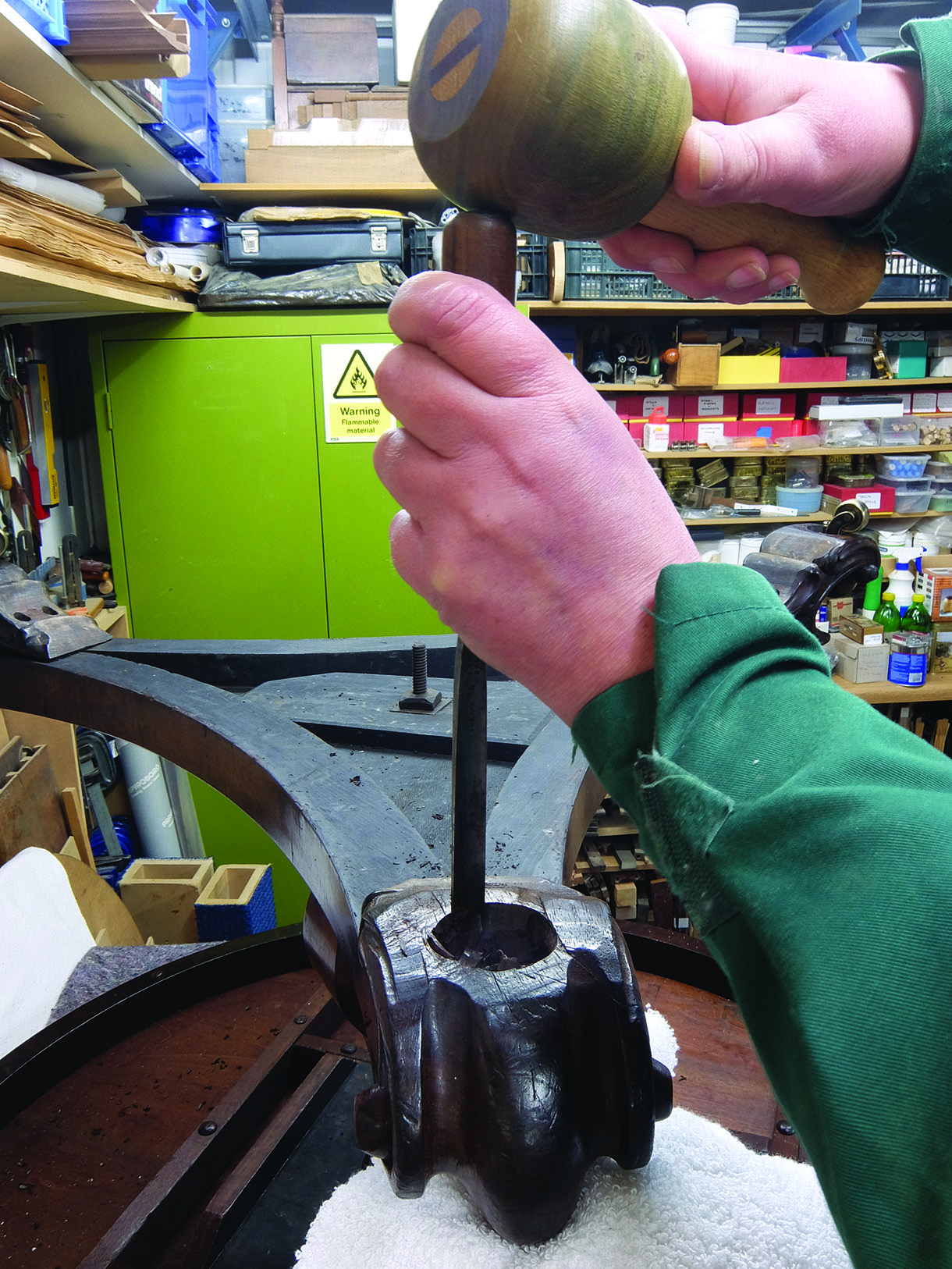 19. I used a flat bit in a drill to take out most of the recess and then a gouge and mallet to take out the remaining timber until the castor fitted, swivelled around freely and the table stood level. Using slotted brass screws with antiqued heads, the castors were screwed into place 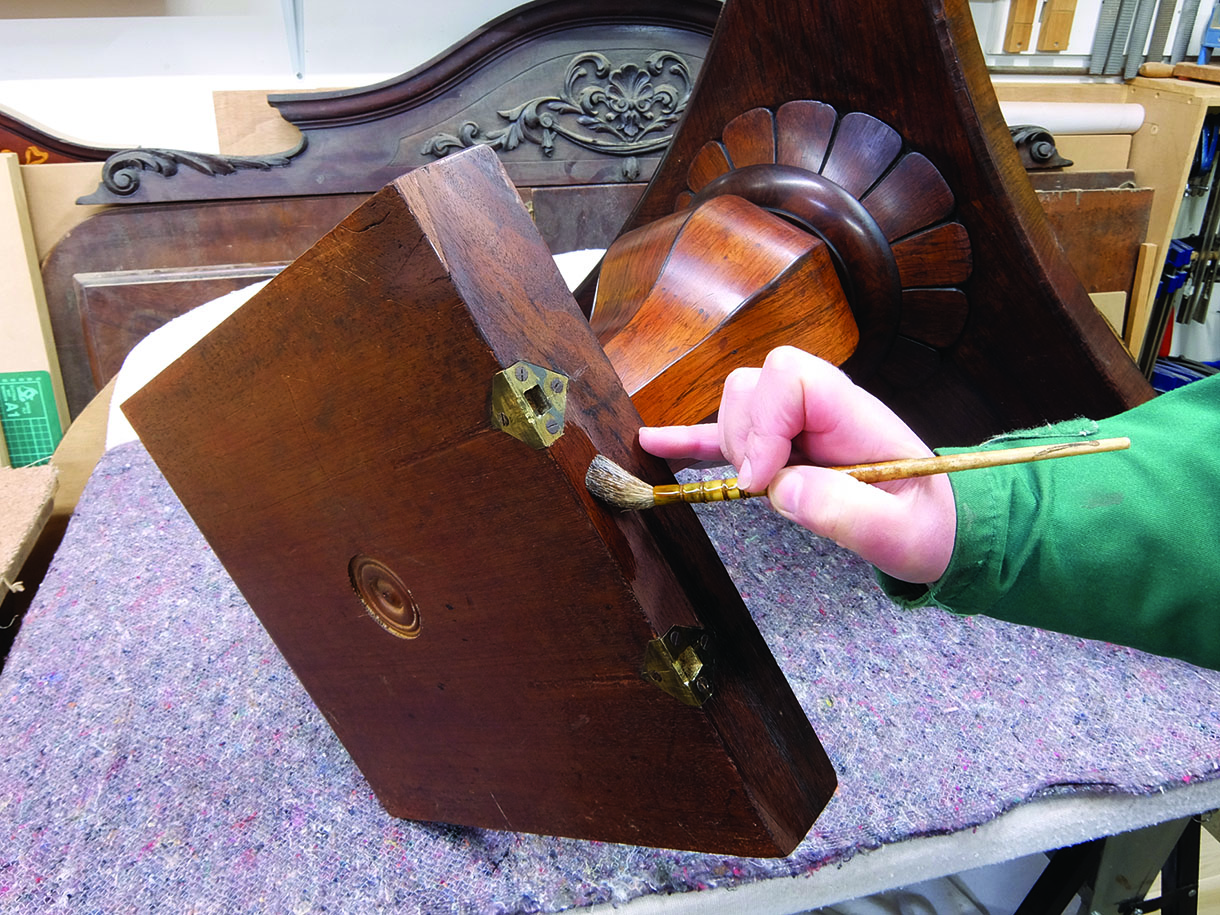 20. The repairs on the pedestal top block and the underside of the top were stained to match using Vandyke crystals and when dry they were sealed with shellac sealer. The colour of the stain can be adjusted to suit by dissolving more crystals (stronger stain) or by adding more water (weaker stain). They were then coloured and polished in to match as required 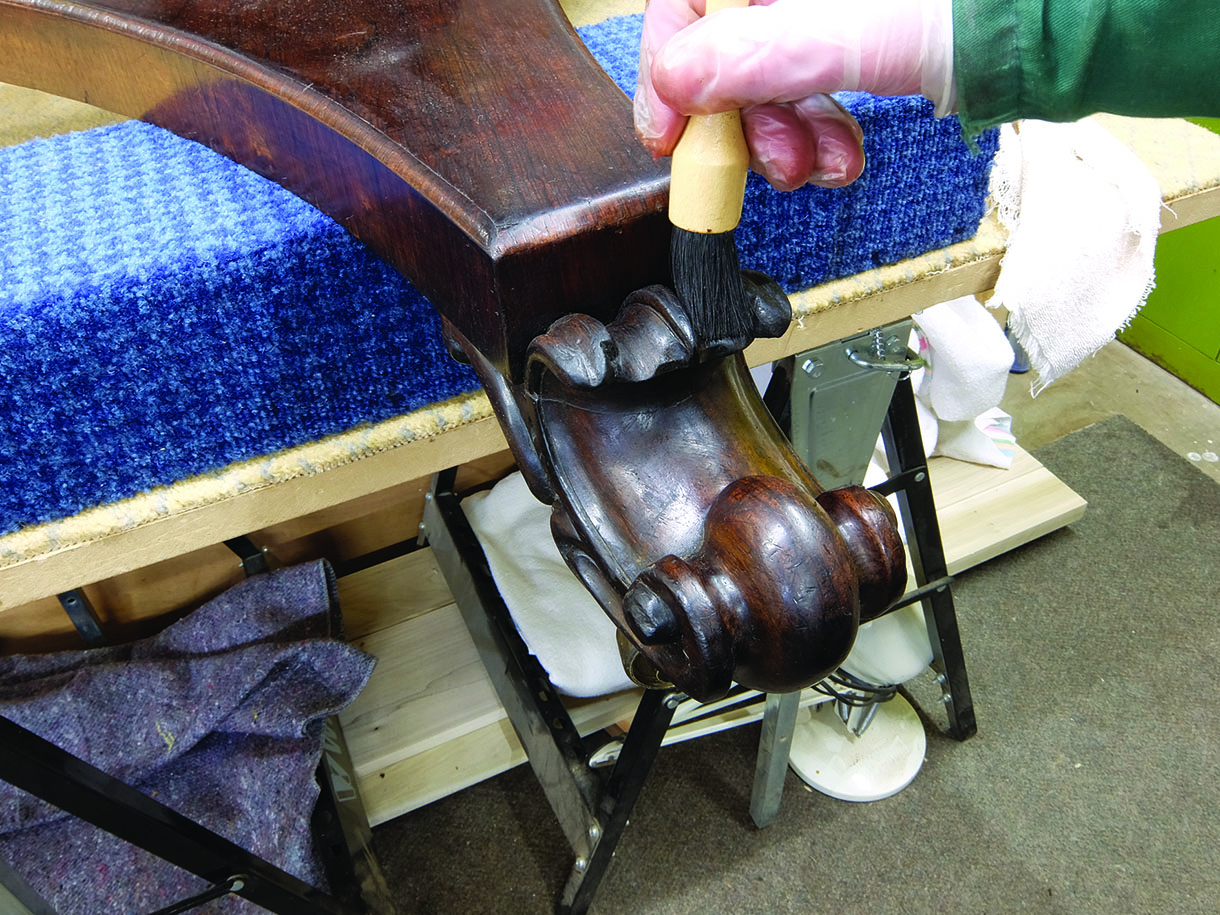 21. The table was given a coat of tinted wax – I tend to use a Georgian mahogany colour – which was left on for 20 minutes or so and then buffed off with a soft cloth. To get in and around the carved feet and decoration on the pedestal I use separate short-haired brushes for putting the wax on and buffing up 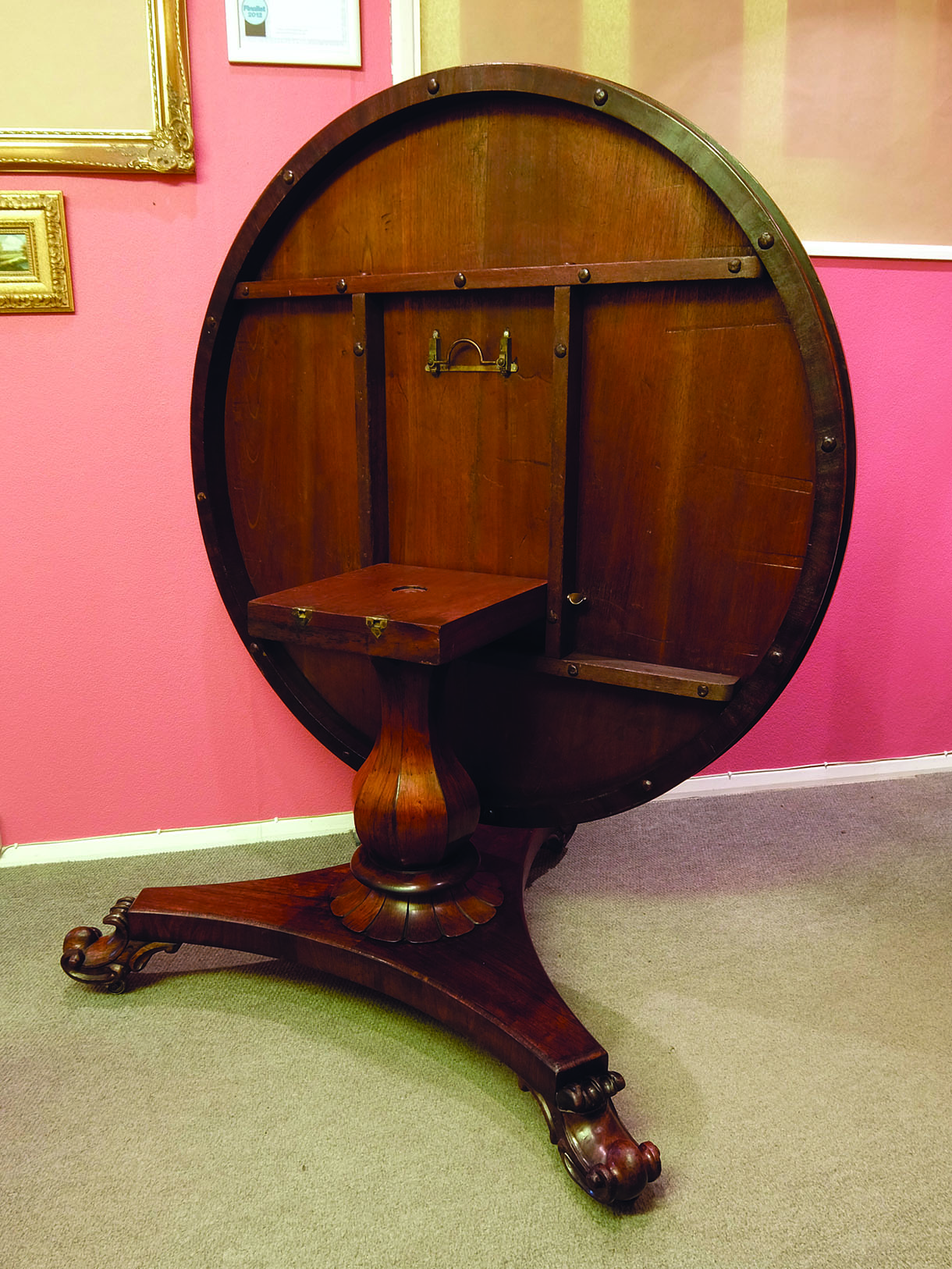