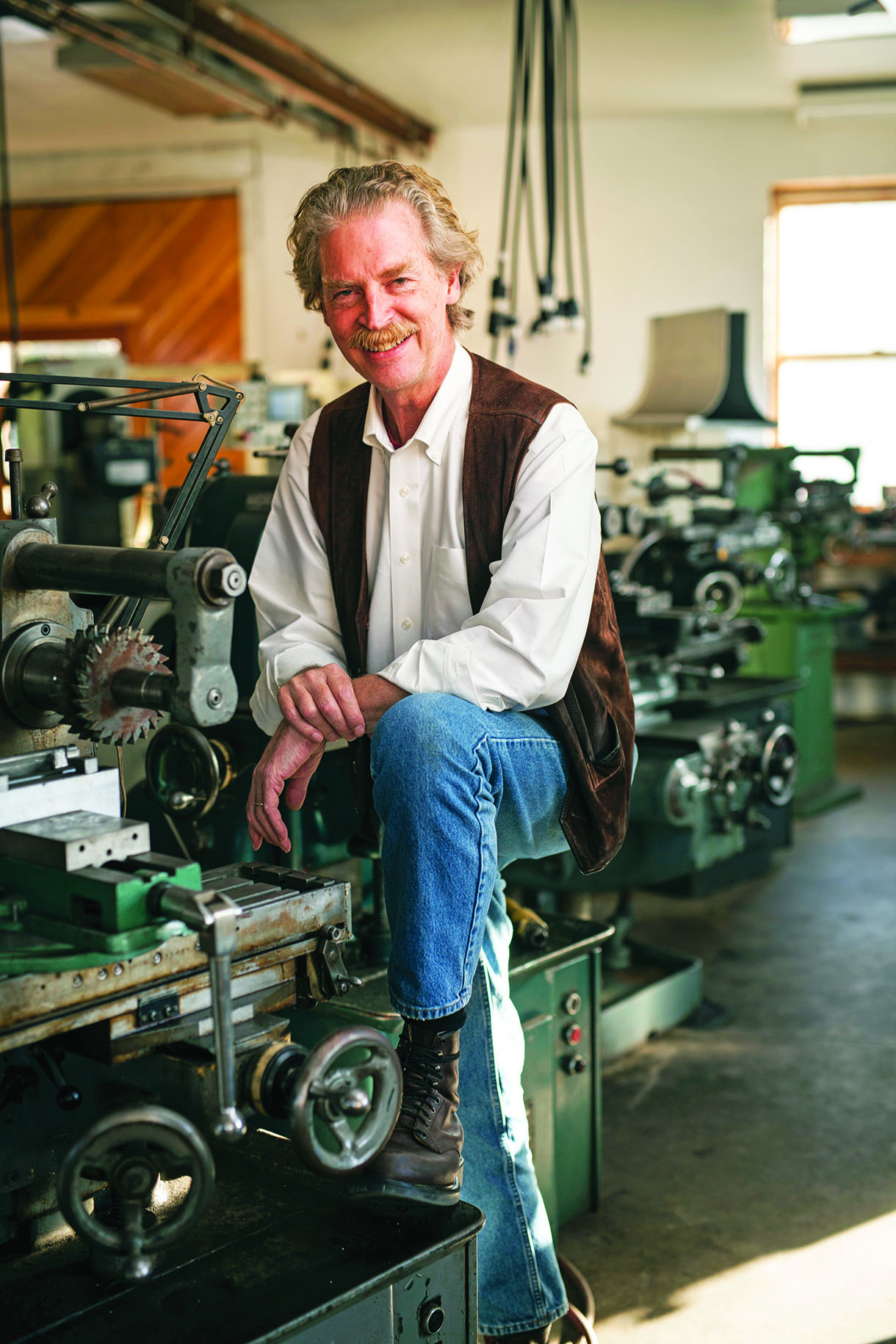 Few people have had a larger hand in the renaissance of hand tool woodwork than Thomas Lie-Nielsen. A self-starter, Thomas has worn many hats in his day – from the earth farmer, dad, wine store owner to, more recently, the maker of some of the finest hand tools on the market. When Stanley, Union, Disston and the other big-name tool makers stopped making quality tools in the 1950s, and as power tools became increasingly popular, hand tool woodwork teetered on the brink of extinction. The disappearance of quality
tools from the market made the tradition of hand tool woodwork increasingly hard to perpetuate.

Figuring things out
I asked Tom if he’d ever planned to grow his company this large or whether he’d set out with the intention of inspiring a rebirth in the hand tool industry, but he told me that he started making tools simply because he found the process to be really fun. After he’d seen some success, however, some bigger dreams began to percolate.
“One of my biggest influences early on was in my father’s boat building shop. They used mostly traditional techniques. The people who worked there had been doing it forever, and they could make just about anything. Most of the things that went into the boats were fashioned right there. These were the people who didn’t run to the hardware store for anything. I visited my dad’s friend Francis Herreshoff when I was 16. He rummaged around in his drawings and pulled out a few blueprints he’d made and gave them to me. ‘Study these and you’ll learn everything you need to know,’ Herreshoff said: ‘you don’t need to go to school to learn, you just need to learn. Immerse yourself in the subject and learn everything about it by doing it.’ So I did. I studied the plans and spent lots of time in both his and my dad’s shop.” The yachts of that time featured a lot of bronze, lots of wood and other materials in their natural state, function and beauty married perfectly. I think those early influences are very apparent in Lie-Nielsen tools even today – function and beauty. Tom told me one of his favourite toolmakers says, “95% of the time, the tool is sitting on a shelf, so it should be beautiful. Looking at it should inspire you.” The quality of Tom’s tools are an outpouring of his character – his focus, his attention to detail and the fact that he has been involved in literally every aspect of the business from bookkeeping to machining to casting to woodwork to catalogue design from day one.
“Things were really different back then, I loved figuring things out as I went, there was no Google. I started with the bronze edge plane, then did the low angle block plane, then the skew block plane and finally the beading tool. No one was making any of those tools back then. Unless you knew a collector or were part of a collecting group, it was impossible to find rare tools. And the collectors were driving up the prices. I felt that people should be able to get their hands on tools that worked the way they should. I wanted to learn how to do everything myself. The first five years or so I was making tools, it was more like an apprenticeship. I outsourced almost everything at first, I worked with a one-man foundry to learn casting, then I learned pattern making and the woodwork came last.” 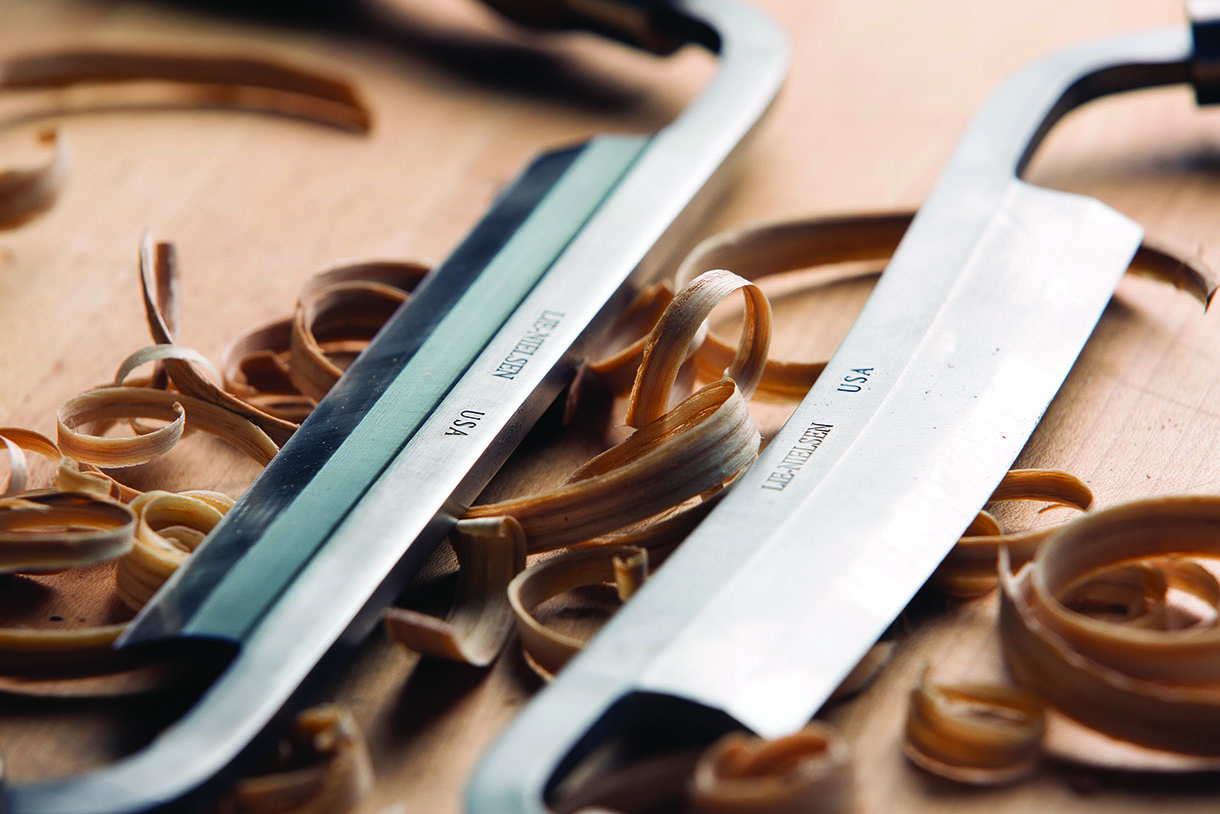 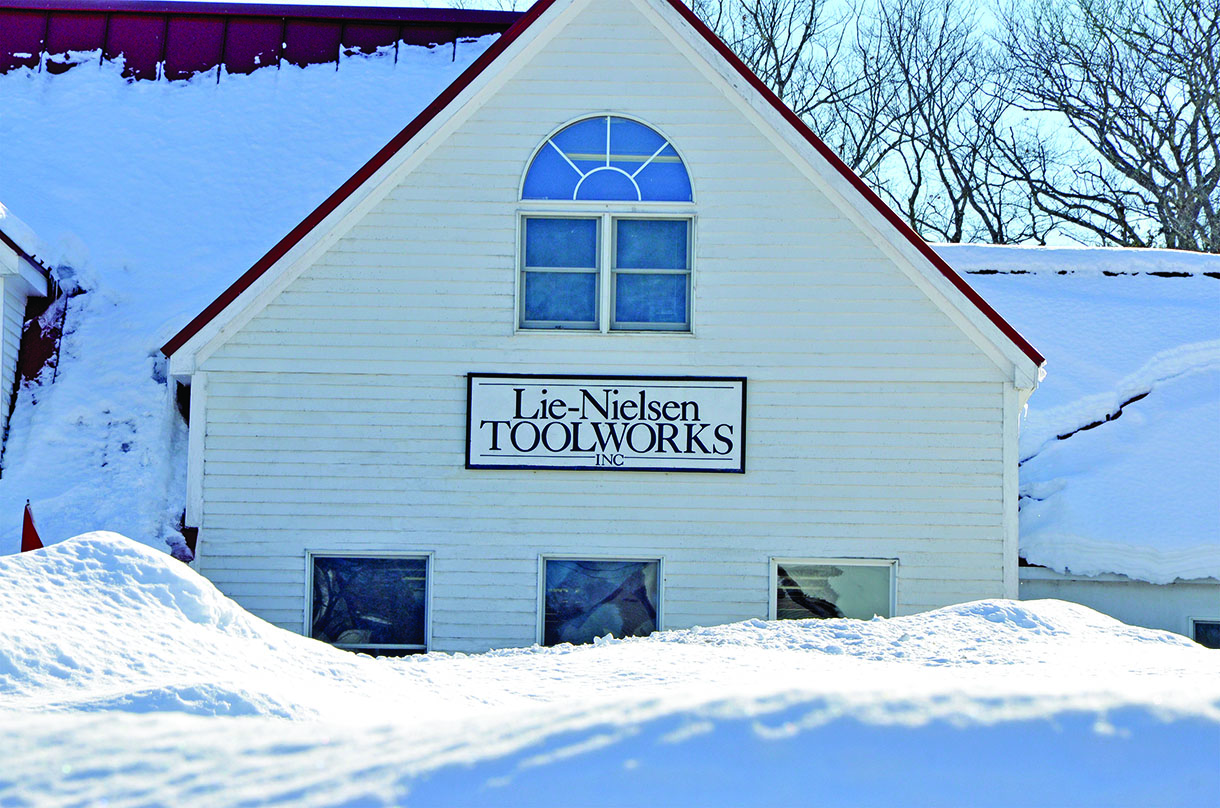 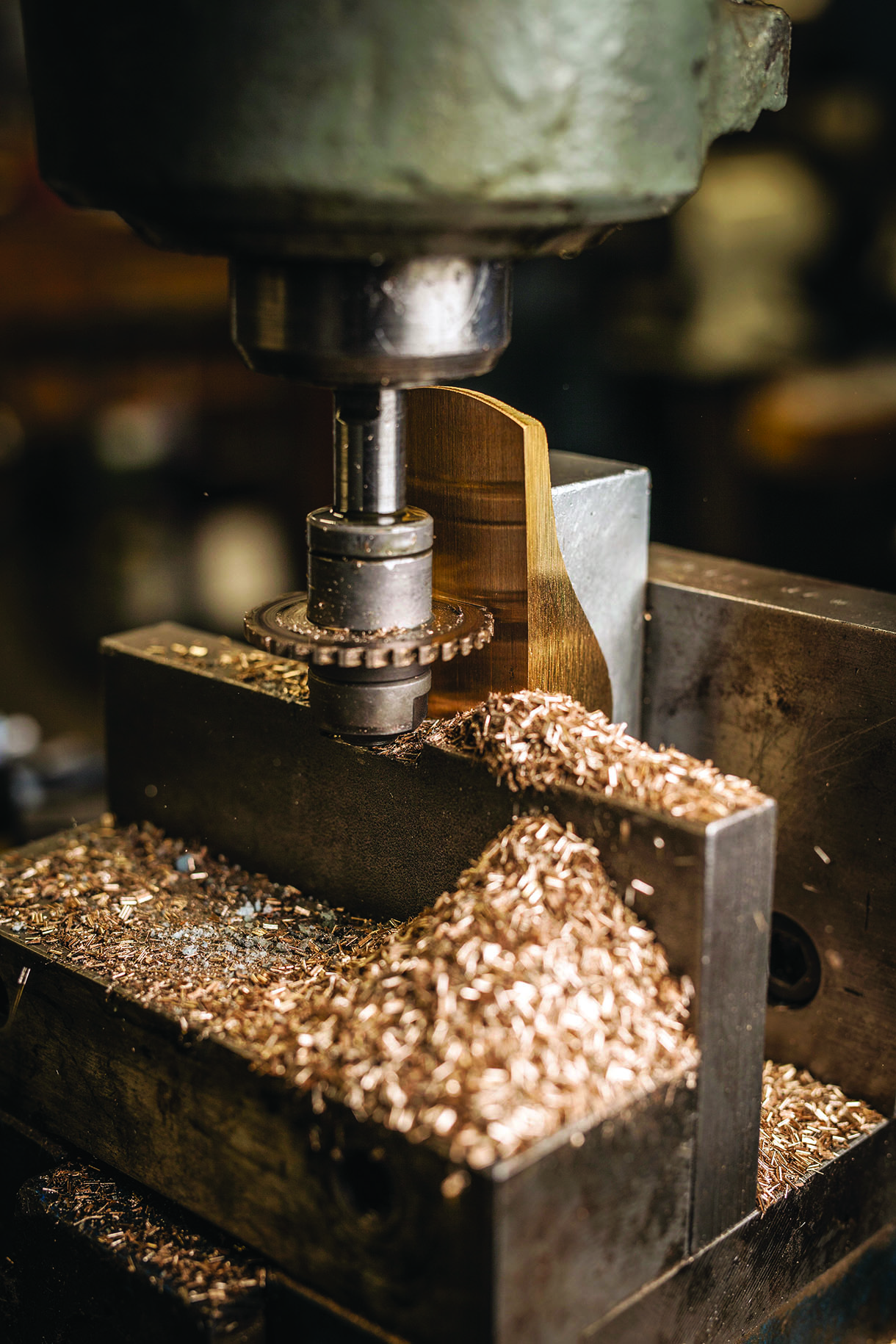 A bronze plane in the making

Growing the business
Tom and I talked a lot about how well farming and woodwork go hand in hand. “Gardening is very similar to woodwork – creating things, making things, watching things grow. They cater to the same interest. I like making things myself, growing my own food, I love experimenting, seeing what works, what doesn’t, what you can do better and more efficiently. Composting, feeding the earth, and helping it feed you. Today I still garden a lot. I heat my house with wood, I like the farm mentality. My tool business was born in my ‘back to the land’ days. We were in an old farmhouse [he told me, chuckling, ‘the place was a dump’], we were doing everything ourselves, growing our own food, selling milk and blueberries. We didn’t have any financial pressures – no mortgage, no kids – and, farm chores aside, I could devote myself fully to the business. A while back, I’d worked for Garrett Wade, a company in New York that had a beautiful catalogue and did everything by mail order. That gave me the idea that I could make a living selling things from a rural area.
I published my first catalogue (with three tools in it). I started advertising in Fine Woodworking magazine, then one day, while I was raking blueberries, I got a phone call from them and they ended up doing
a little feature on me.
“At the time, there were a few other boutique toolmakers, but they all eventually failed. My end goal was to be able to make a living, make tools and supply them to people who needed them. After the divorce and leaving the farm, I got the space that I’m in now (six years into the business, in 1989) and I started to devote myself more and more to the business. I bought my first big milling machine and hired my first helper. After I’d gotten my first CNC machine, we made the No. 62 Low Angle Jack plane. This is my favourite tool. It’s the thing I’m most proud of, and at the time it was revolutionary. It works so much better than the original, which was a good idea that just didn’t pan out for Stanley. Around this same time, by happy accident, I discovered ductile iron. Cast iron gets really hard in thin areas, so I had been having problems milling it. Some guys at the foundry suggested ductile, so we cast some ductile planes and they machined beautifully, so then I got to test them. I would make plane bodies and then beat them with a sledgehammer. It was unbreakable, and totally awesome. Bronze is the same way. There were a few things that really set the Toolworks apart from the beginning. I like weight, I like thicker castings, thick blades were a thing I started right off the get-go. I also wanted them harder than the old carbon steel blades, I started with 60 points on the Rockwell scale, several points harder than anything else out there at the time.” 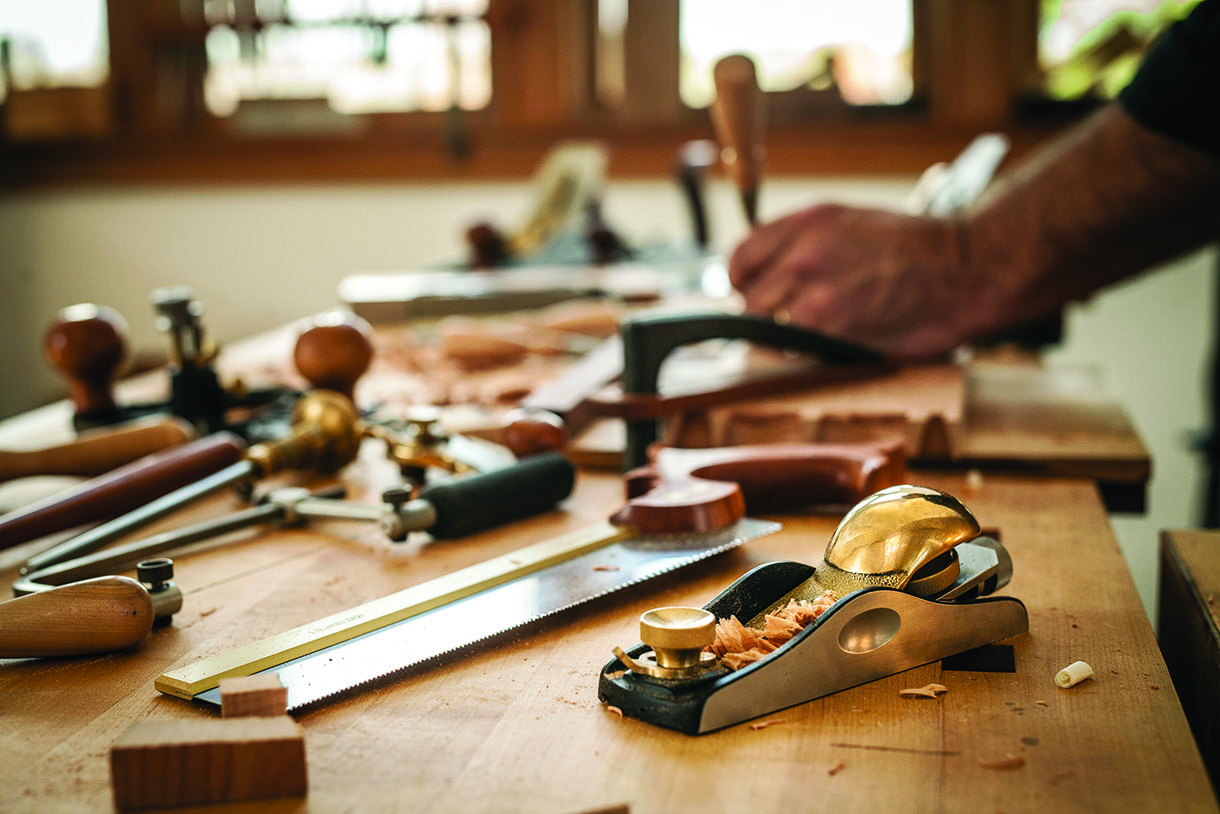 Lie-Nielsen tools are the definition of function and beauty

Quality tools
Tom’s early tools made quite a stir. His beautiful tools with quality machining, thick blades, and thicker castings set the stage for a major comeback for hand tools. Tom has never been much of a marketer, he is confident that the tools will sell themselves. And they have. He puts out a beautiful catalogue and hosts Hand Tool Events all over the USA so people can learn about hand tools, ask questions and try every tool Lie-Nielsen makes. Tom is famous for taking his time to perfect every tool before releasing it. The newly released honing guide was five years in the making. The much anticipated plough plane he is currently working on has had a similar time-frame. Collectors and users alike anxiously await every new move Tom makes. Something I’ve come to find really interesting is the progression that happens in the mind of so many people when first exposed to Lie-Nielsen tools. First it’s: “How can someone charge so much money for one tool?!”. Then, after getting their hands on the tools, experiencing the bliss of using a well tuned, expertly designed and machined tool made in small scale batches in the USA, it’s: “How does he charge so little for his tools?!”. An interesting thing someone recently pointed out to me is that Tom hasn’t raised the prices of his tools in 10 years. 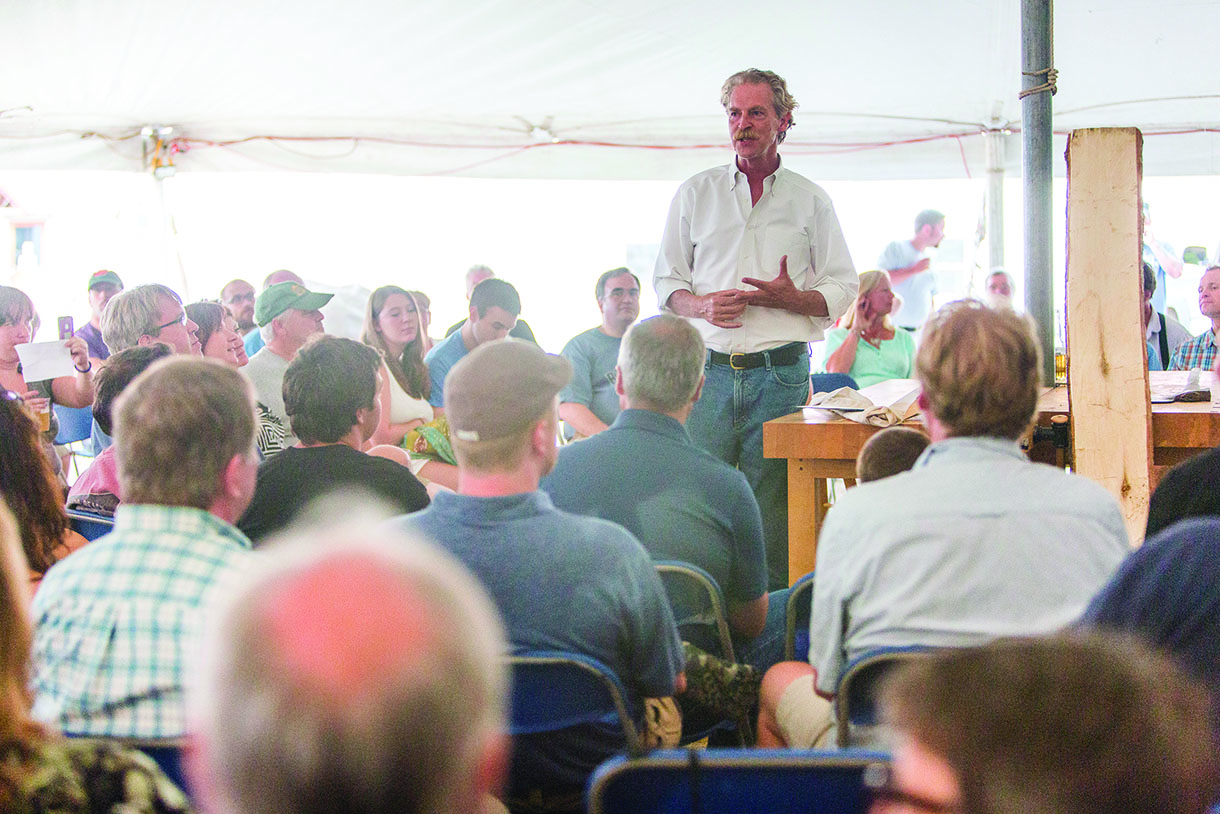 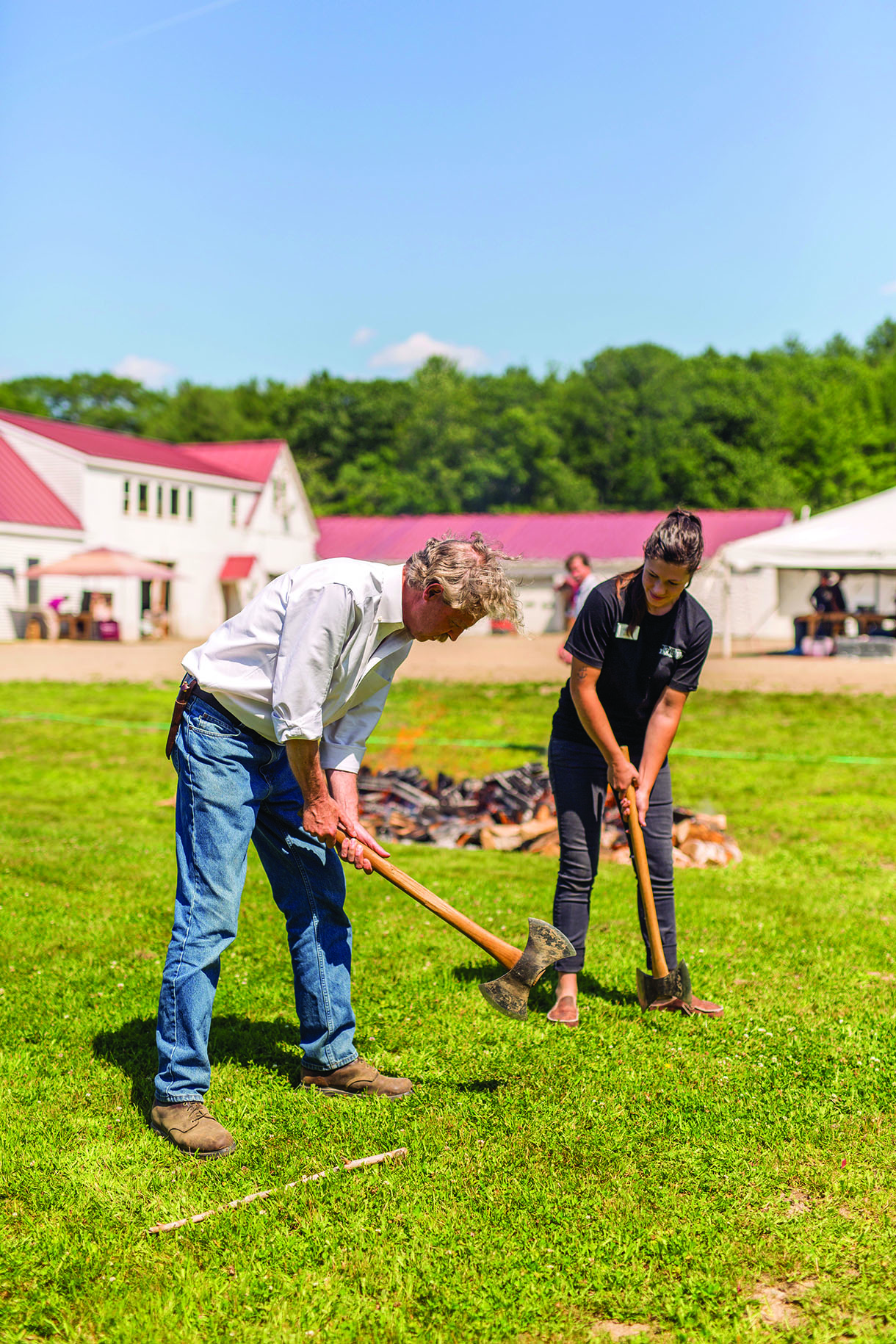 A lesson in throwing axes 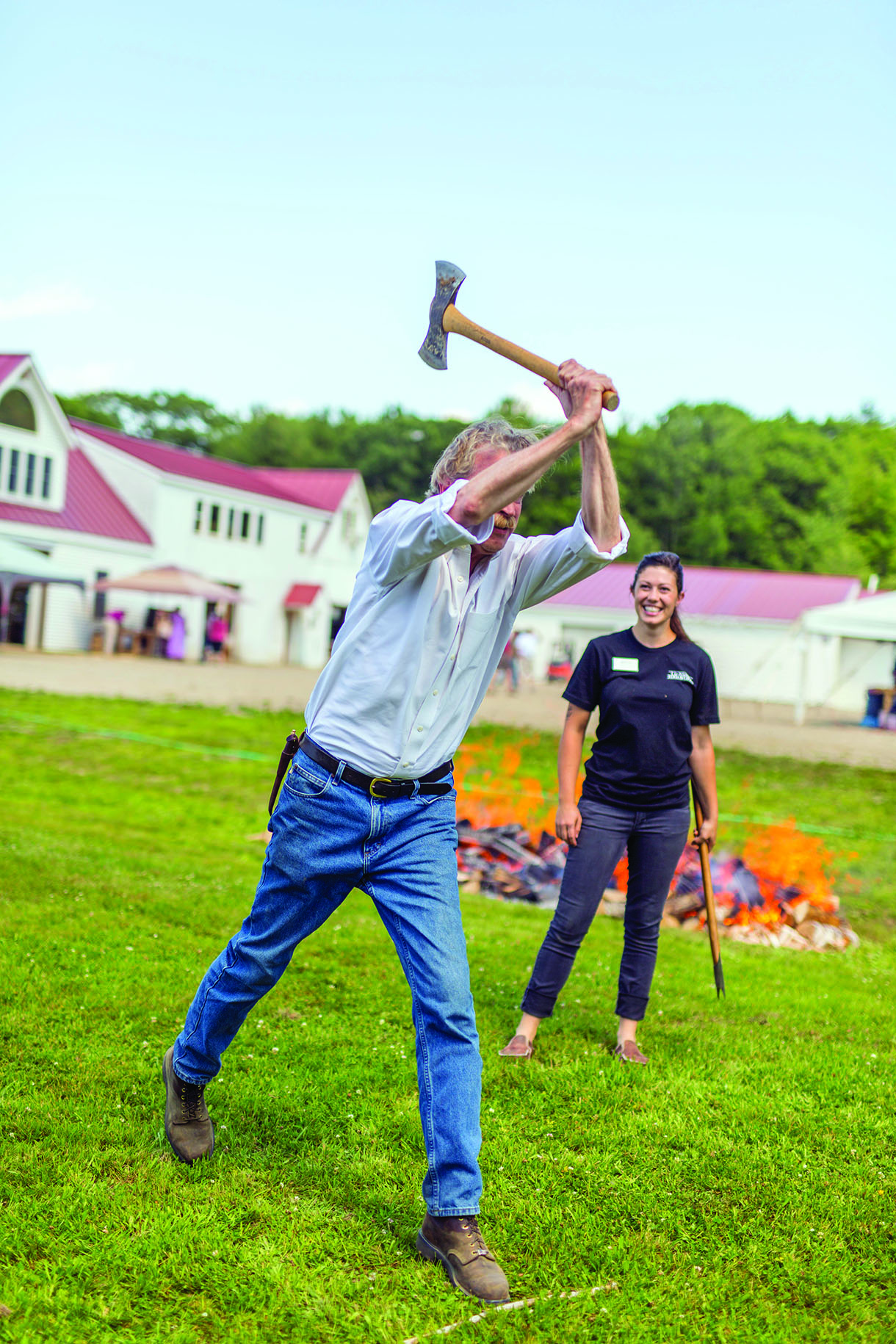 Learning in the internet age
When I’m interviewing someone, I always like to ask if they have any advice for up-and-comers in their field.
It’s been 35 years since Tom got started making tools for the woodworking industry, and everything, literally everything, has changed for us youngsters in woodwork. We now have Google. The entire world is at our fingertips. We have instant exposure to every aspect of every craft. Thanks in large part to Thomas Lie-Nielsen and those like him, we today have the luxury of buying fine tools geared to tackle niche tasks in every area of the workshop. When it comes to learning of a new aspect of the woodworking craft, be it lathe work, timber framing, chair making, bench building, cutting fine joinery, spoon carving, bush craft, or now even light blacksmithing and tool making, then instantly jumping in with both feet, I am the worst possible offender. I love dipping my toes into new ponds, but I also know that I already have spread myself far too thin. In 10 lifetimes, there is no way I will be able to master all of those aspects of the woodworking craft, especially not in tandem with my equally thinly spread pursuits into farming. The calibre of work Tom produces is the direct result of a slow, focused journey with a clear end in sight. “Because there was no Google, I was never exposed to a new process or skillset before I’d mastered  the one I was currently focusing on. I had the luxury of learning tasks one at a time and I wasn’t ever being pushed by the market. I didn’t have the exposure or the temptation to get in over my head – I learned each skill and then I moved on to the next thing.” In today’s world of instant gratification, I think we all have a lot to learn from Tom – if you want to be the best, you have to start small, grow slowly, and learn new skills only with the focused intent to master them.