A Woodsman’s Shelter:
Gary Marshall shows us how to make a traditional temporary woodsman’s working shelter – ‘a rustic bodger’s lash-up’ in his words 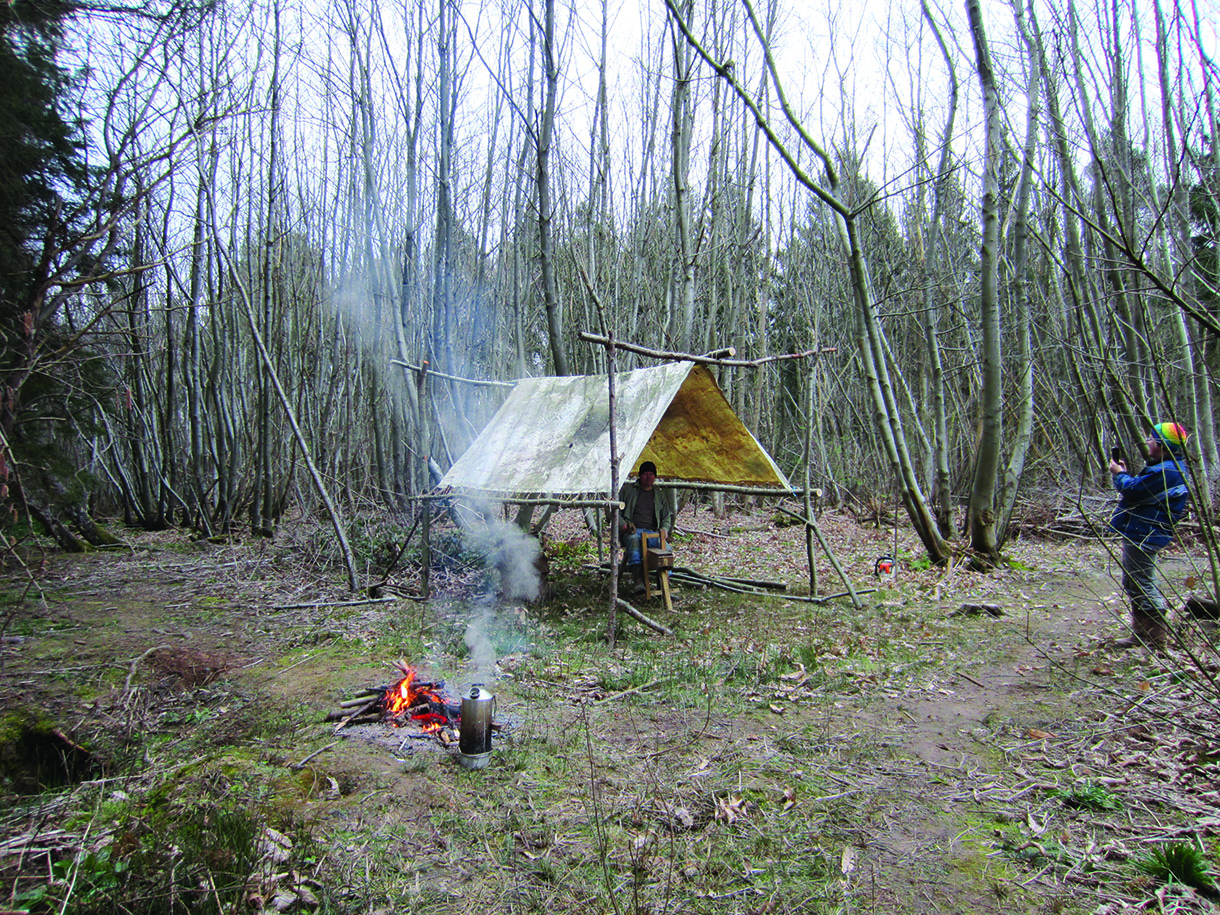 In 40 Acre Wood, we dismantled a dilapidated rough pole and tarpaulin shelter. I showed Robin and Diana a photograph of a coppice worker’s open sided shelter, found in a first edition of Country Notes by Vita Sackville-West. We thought this would make an ideal replacement. So the project is our attempt to construct our own authentic woodland worker’s temporary shelter – based on a traditional Kentish design, using only basic materials and tools to hand.
The trickiest bit was finding straight growing poles with forks in the right places to fell. The wood’s full of poles and they all look right until you need them! 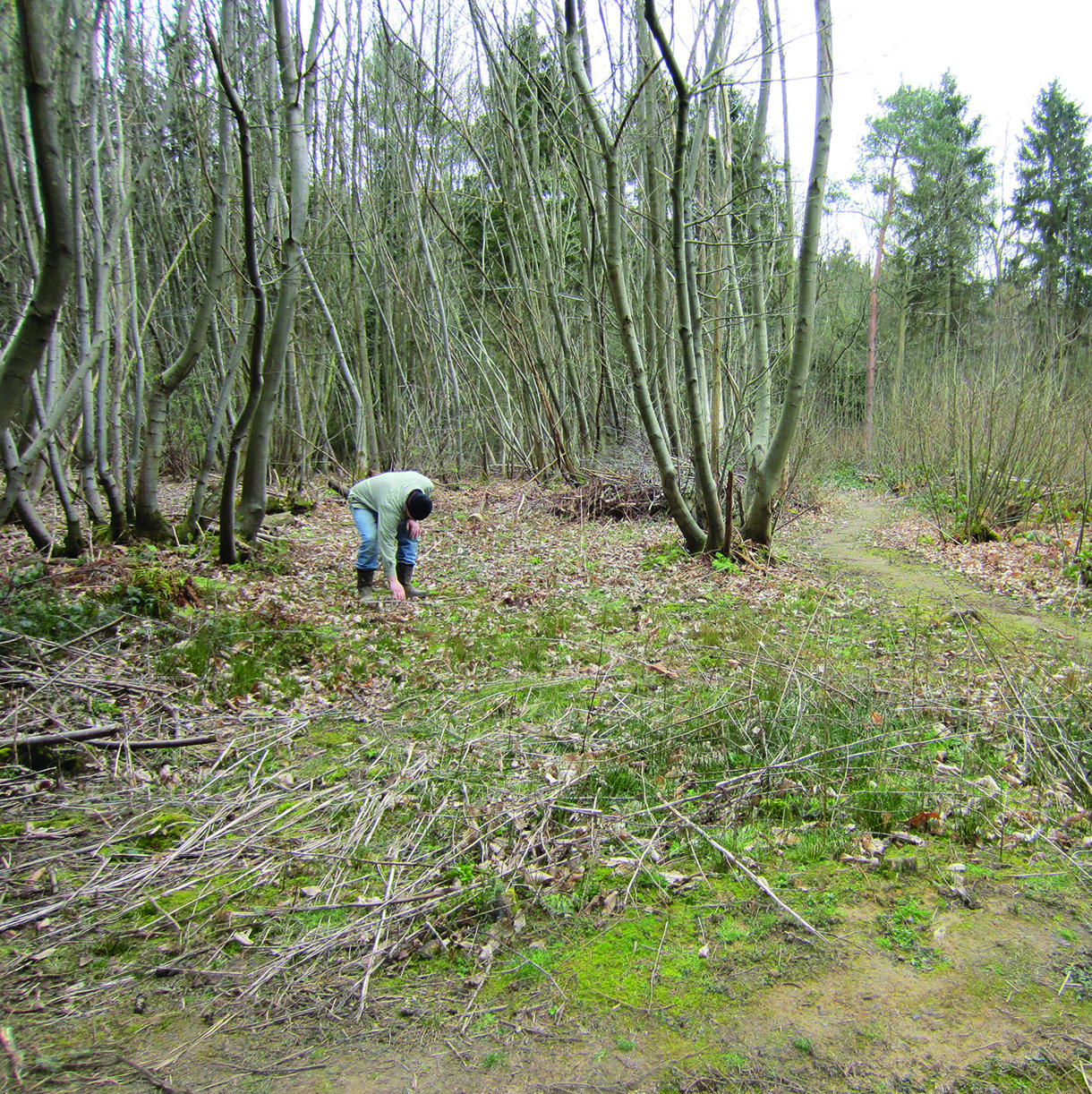 1. The site was selected. It was flat, clear and near to the area we’ll be working next 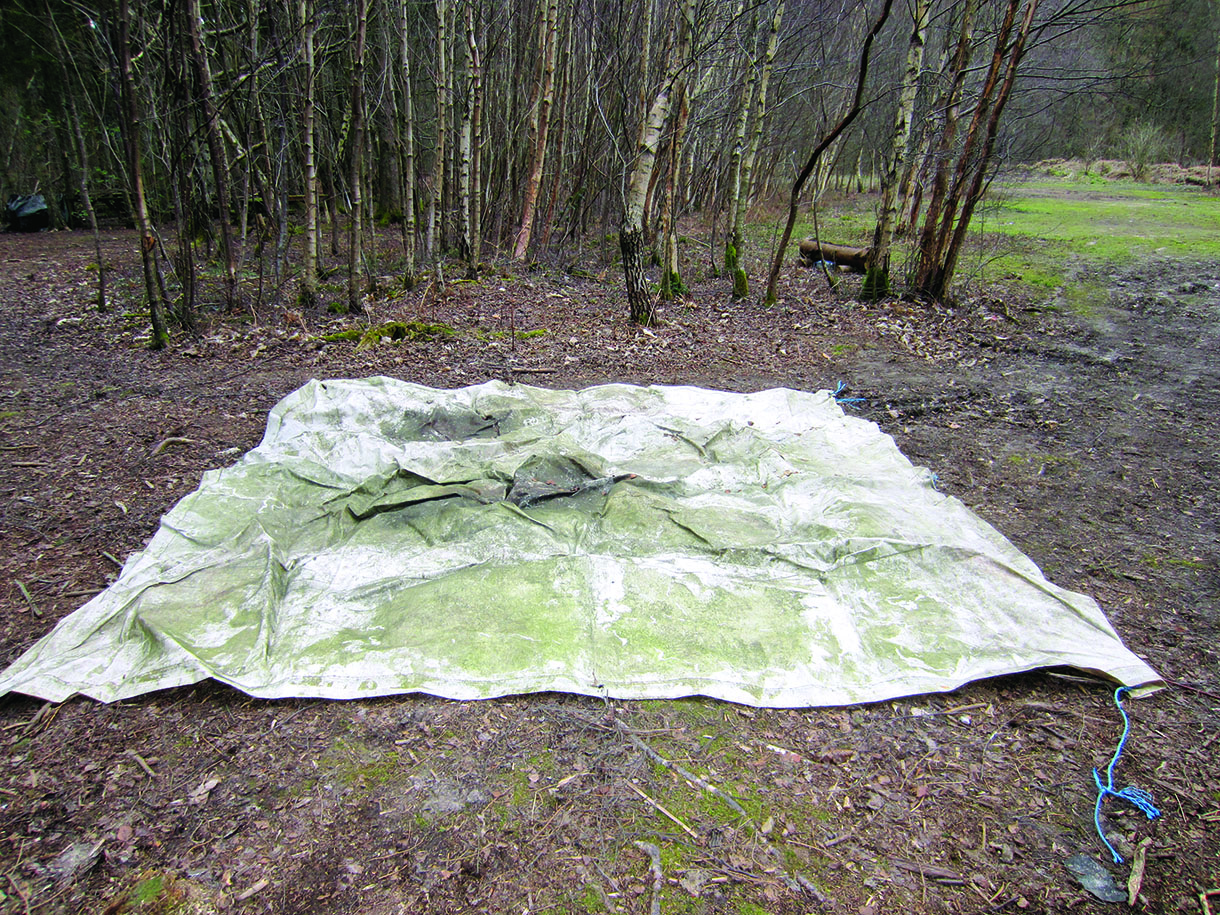 2. We laid out a tarpaulin, ours was square. Small pilot holes were made in the ground to mark the corners. Two of the holes on one side were moved inwards to allow for the square becoming a ‘fat’ rectangle due to the ridge height 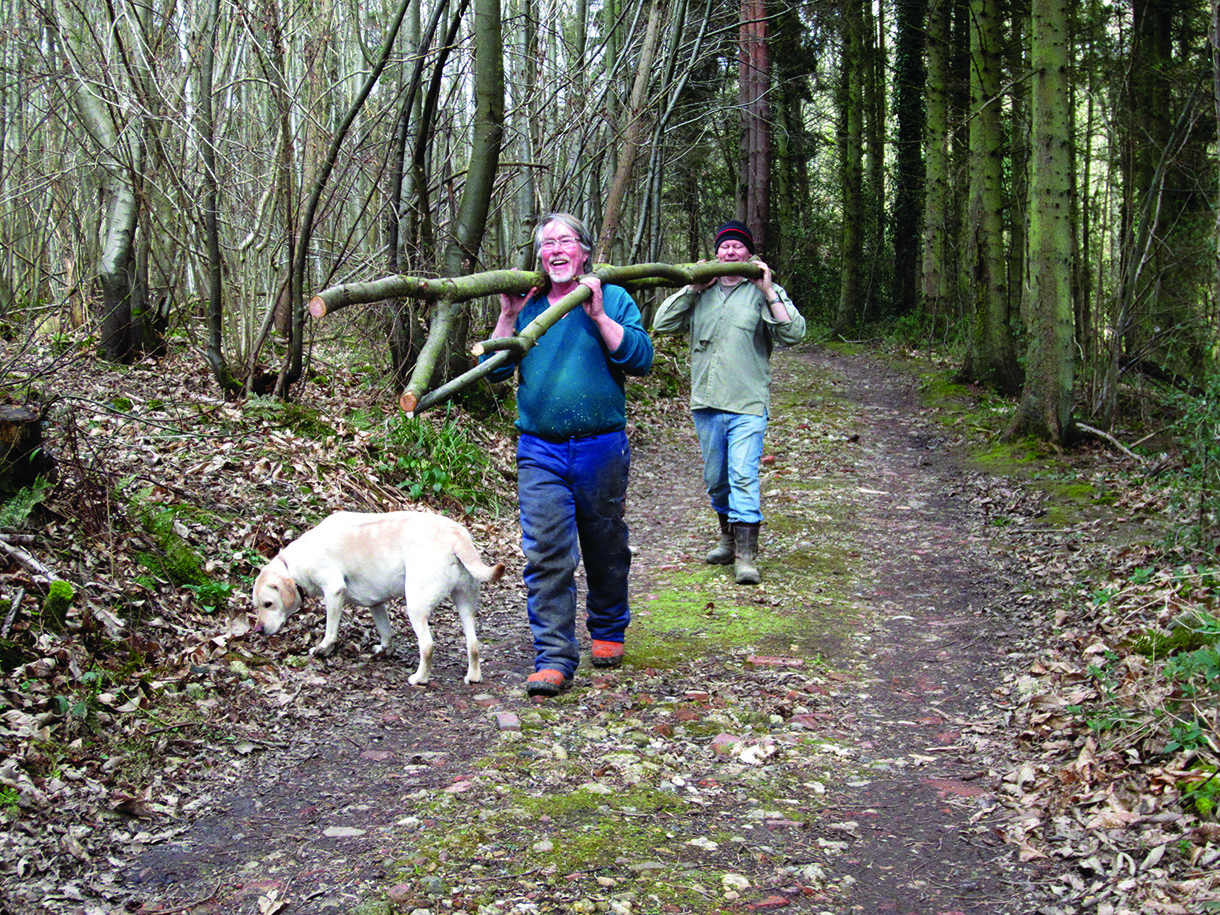 3. Four straight (as possible) upright poles, with strategically placed branch forks were selected, cut and walked to the site. Then any surplus lengths were cut off the basal (base) ends, so they’d all end up the
same length 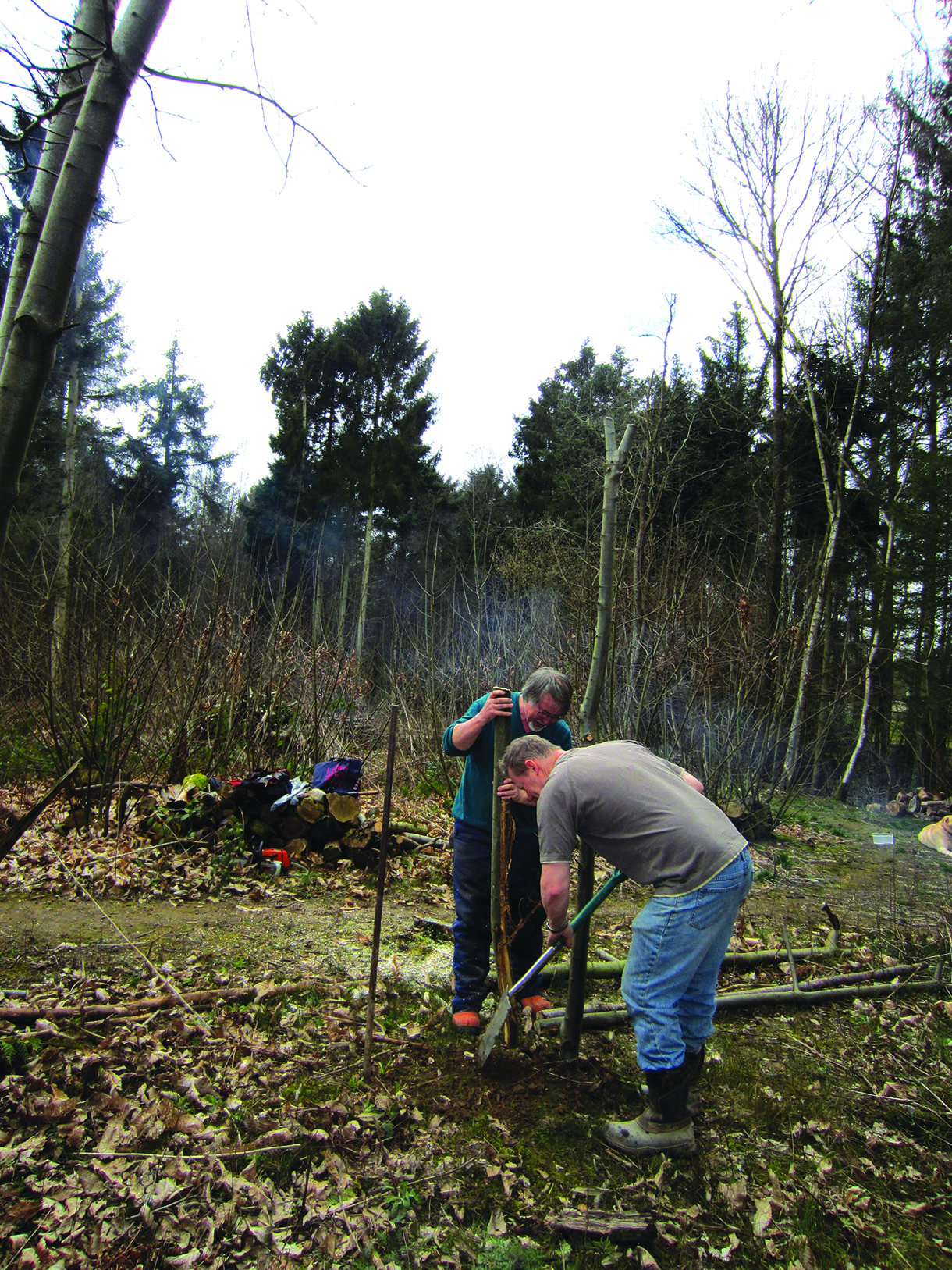 4. Holes were dug about 75cm deep. The corner poles were inserted and firmly earth rammed in to secure them 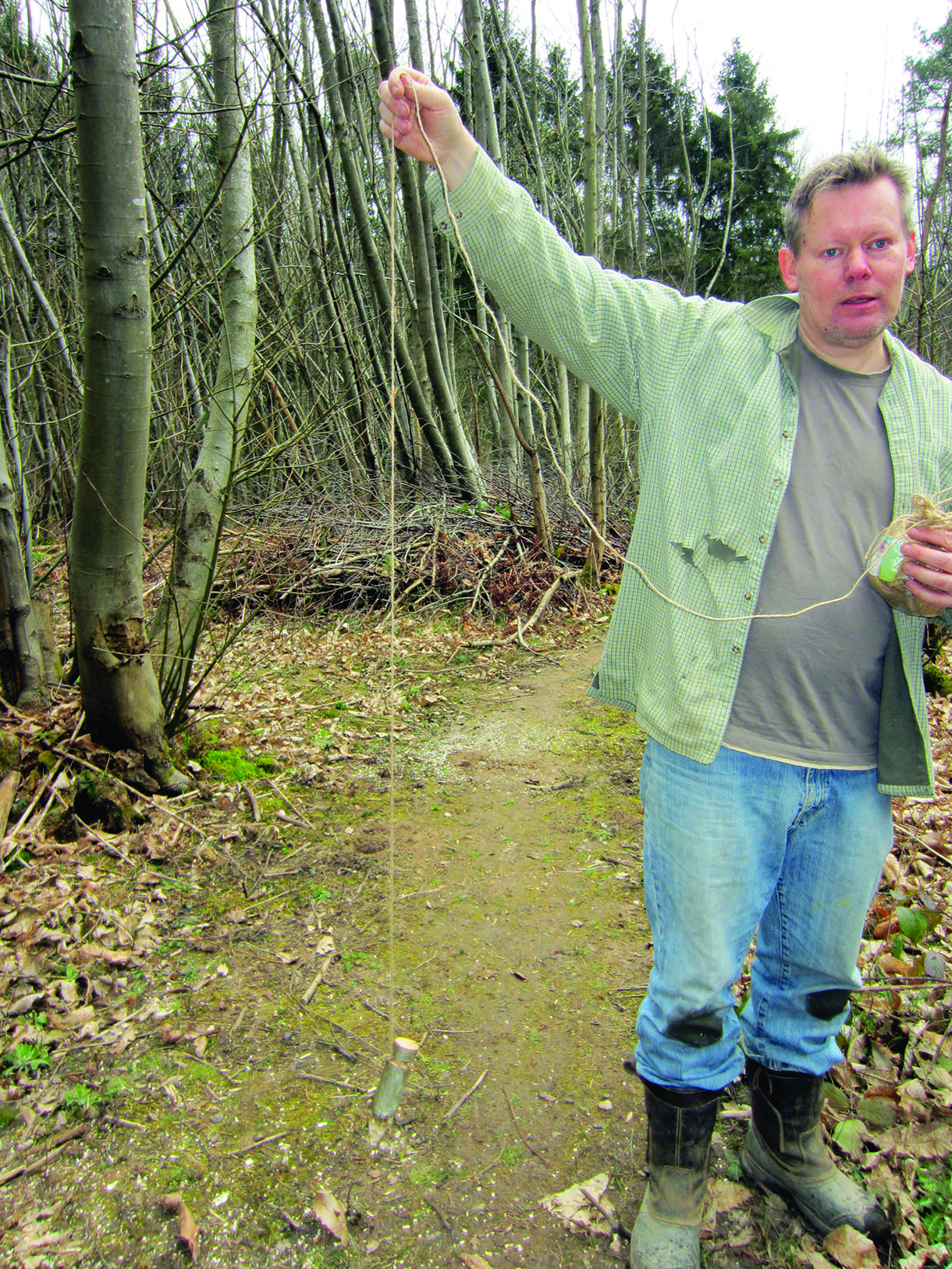 5. Yes, we did roughly check the vertical (bearing in mind natural aberrations in the branches). The forks were aligned to take horizontals 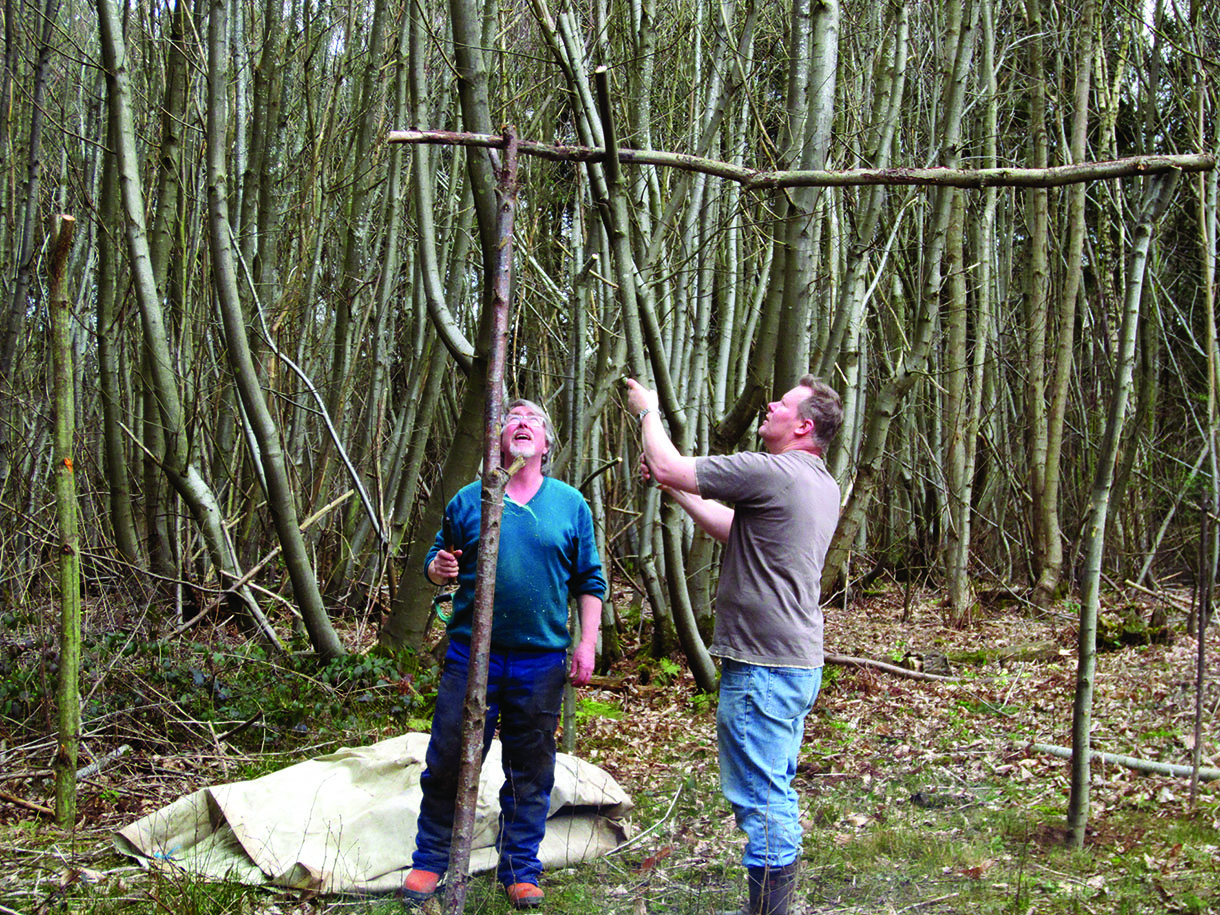 6. Two ‘goalposts’ were made, inserting specially selected and cut horizontals. Note, Robin’s device (just a forked offcut) to aid handling beyond our reach 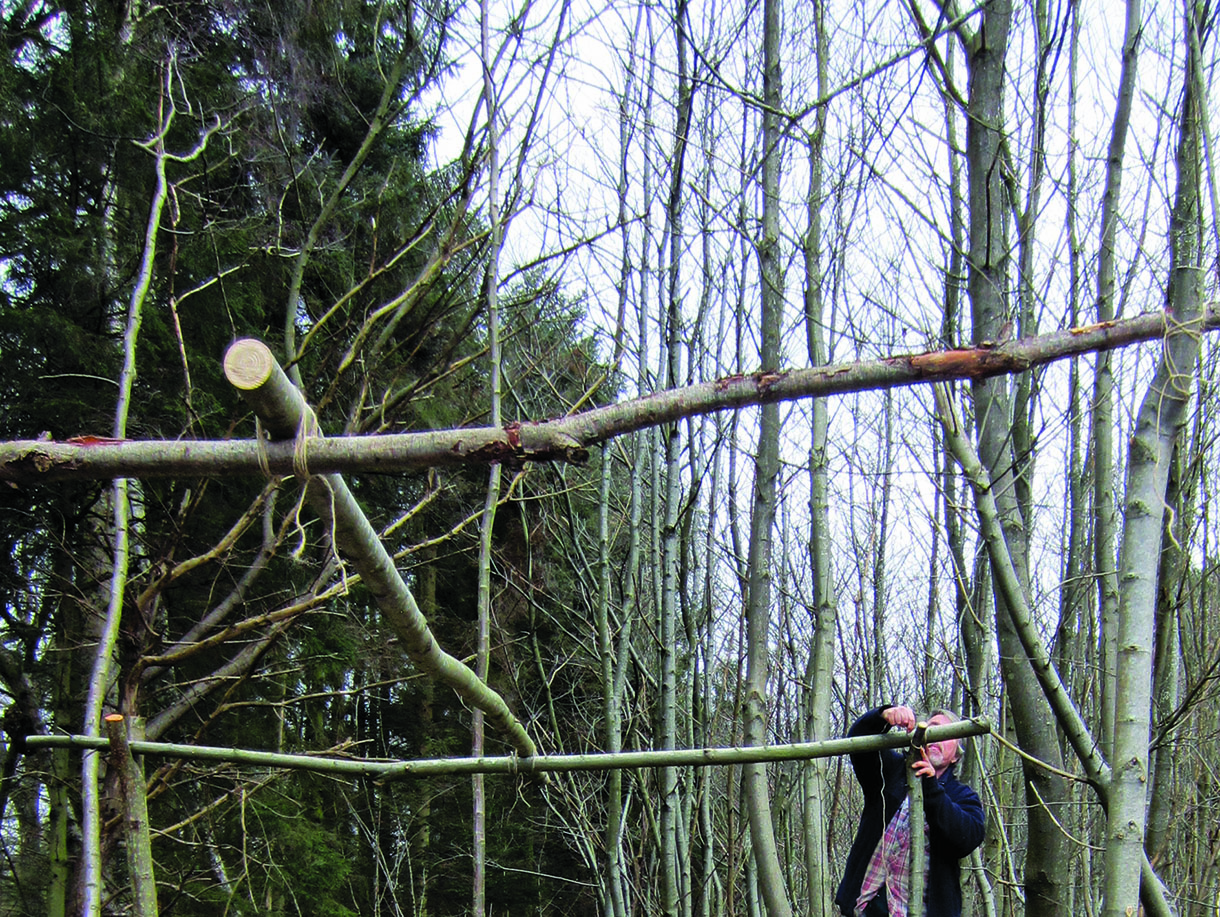 7. Another horizontal was positioned across the two goalposts, in the middle, as the ridgepole. All posts and poles were then lashed together, using natural twine 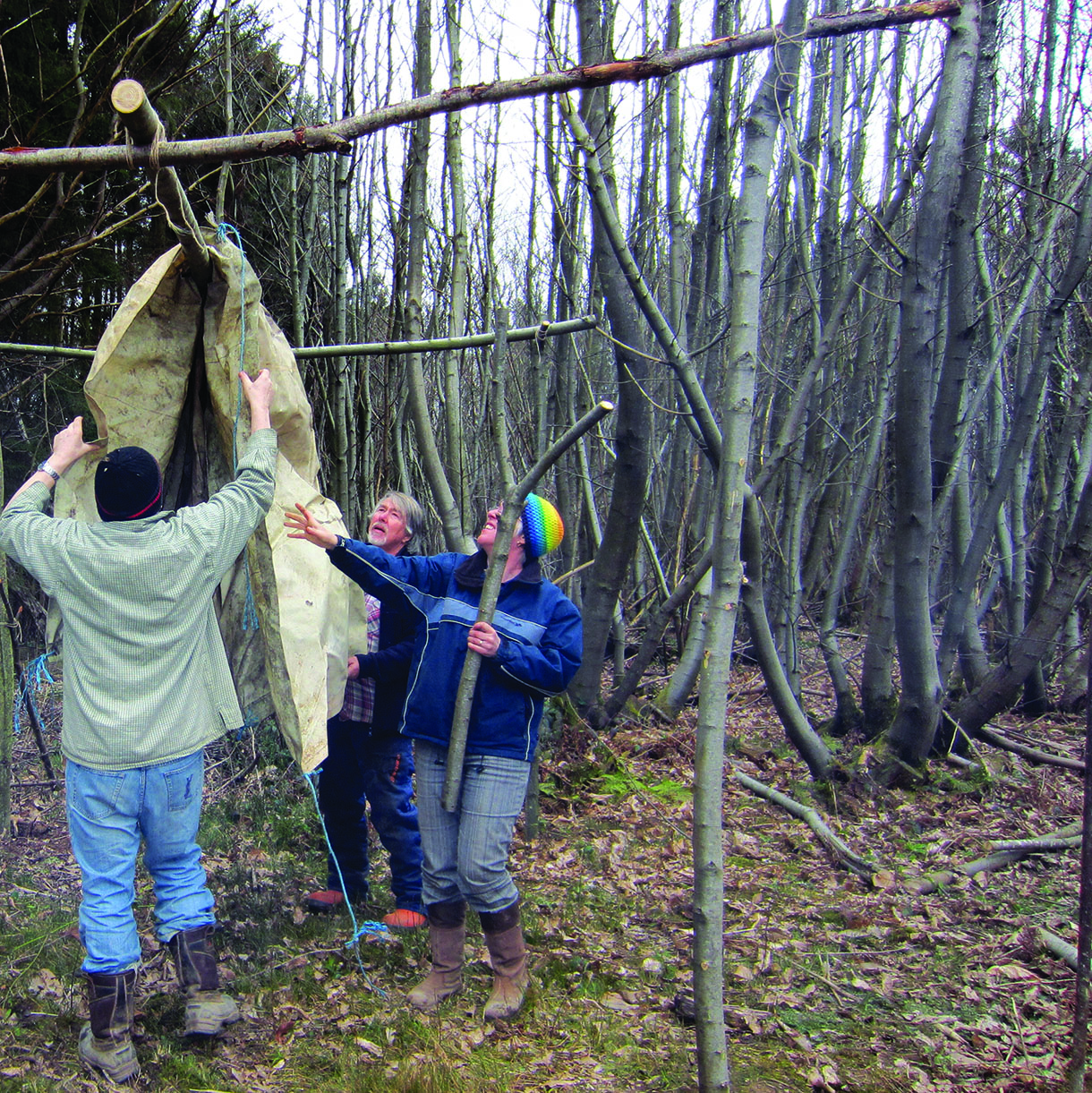 8. The tarpaulin was positioned across the ridge 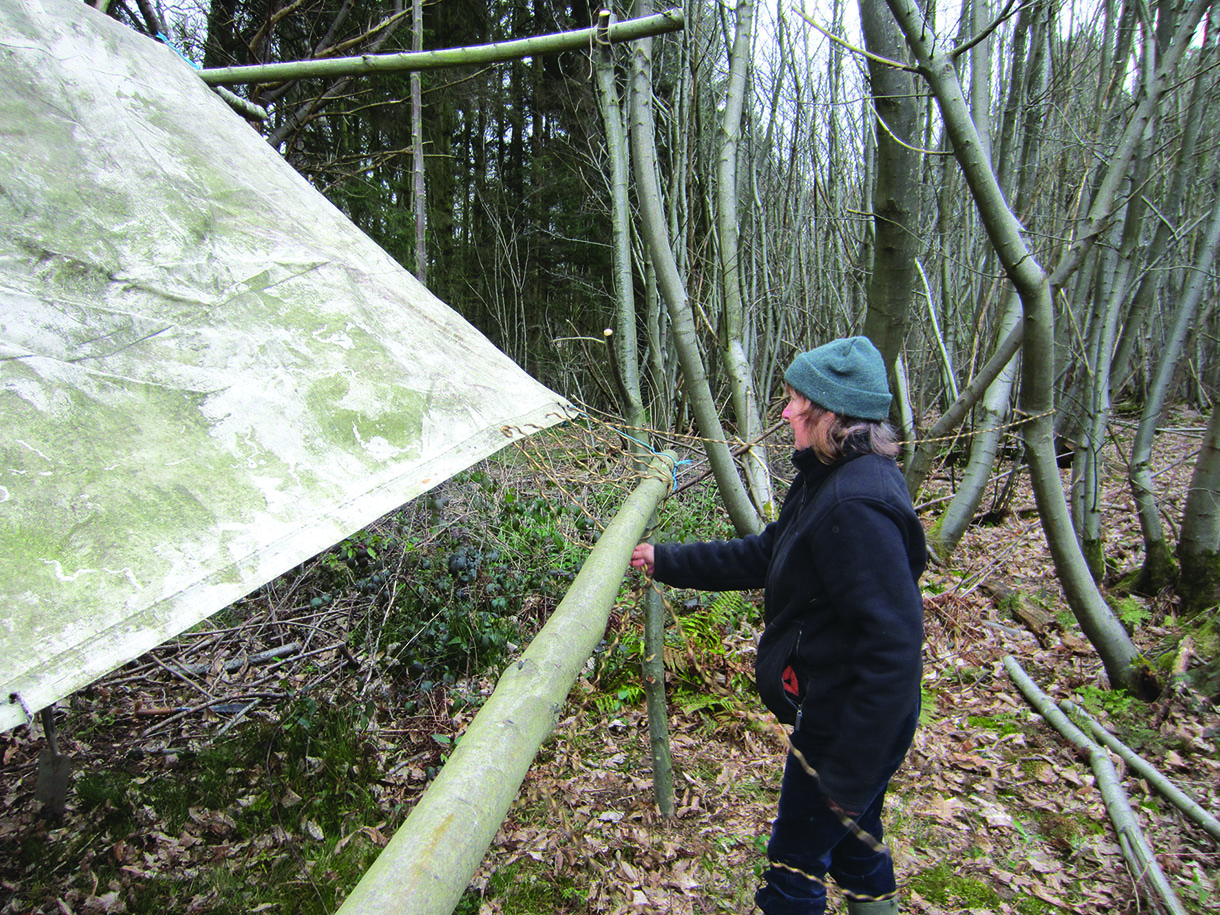 9. The tarpaulin was ‘laced’ to two more horizontals that we lashed into a suitable position on the ‘non-goalpost’ sides. Pre-made lacing holes would have been good, we had to make ours using an old round file heated in the fire and melted through the tarp! 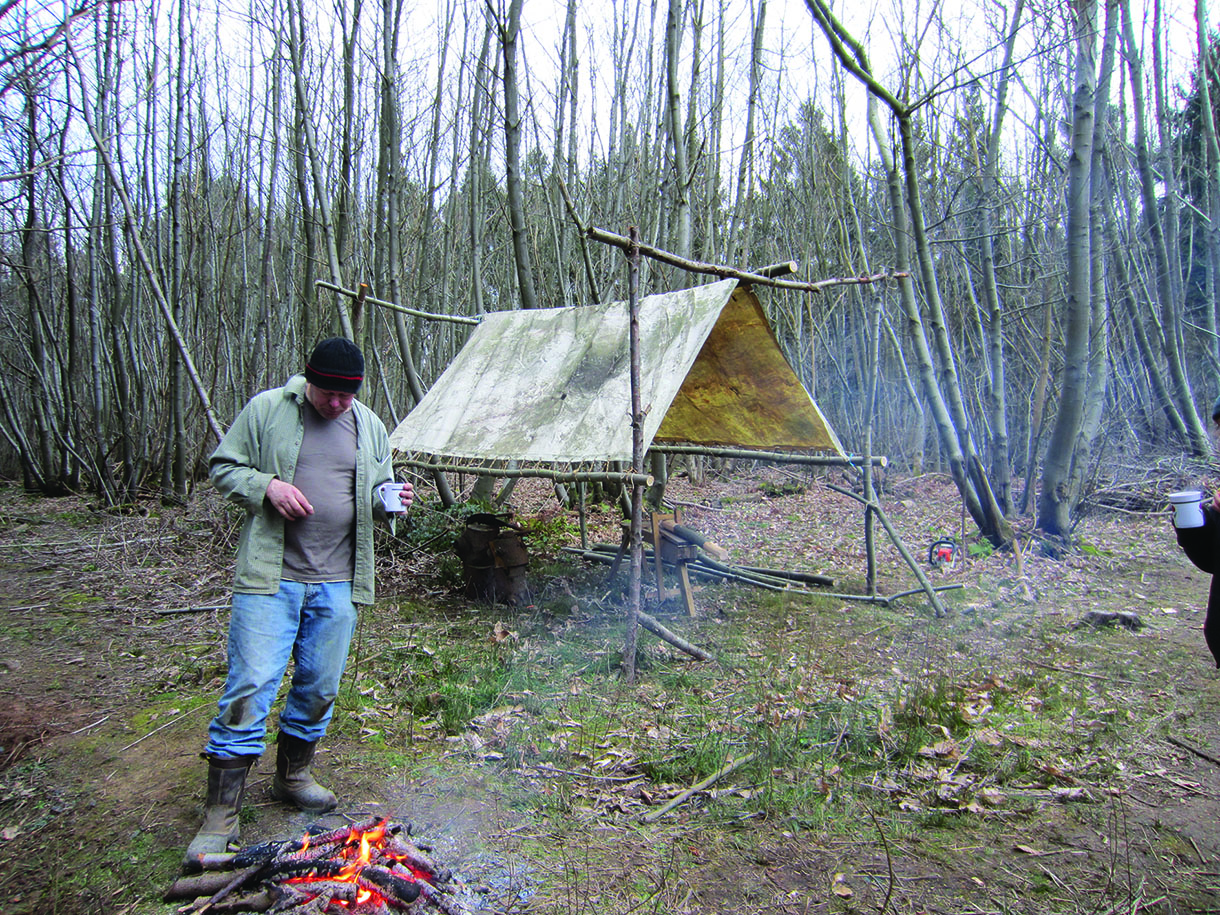 10. We had a cup of tea and some excellent lamb stew! Note that we added some diagonal bracing and guy ropes attached to nearby trunks for extra support 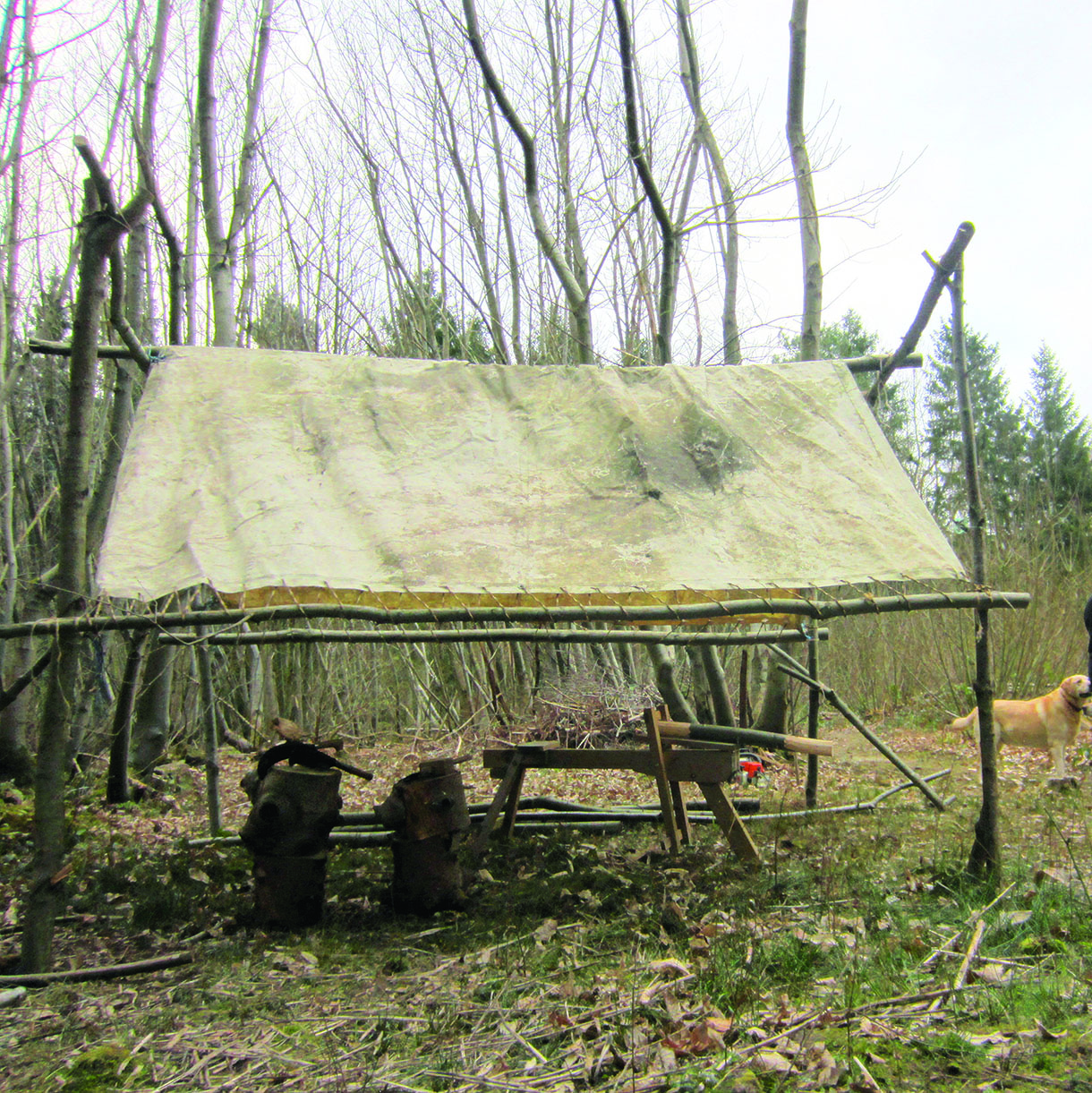 11. The final photo (complete with shave horse and chopping blocks ready for working) shows just how unobtrusively the shelter sits in woodland, we purposely used a well-weathered tarp. No fixtures were used other than rope and twine and measuring was done by eye. If it was good enough 80+ years ago, it’s good enough for us today!