Here be Dragons:
Dave Western discusses his favourite dragon designs that work best on a lovespoon 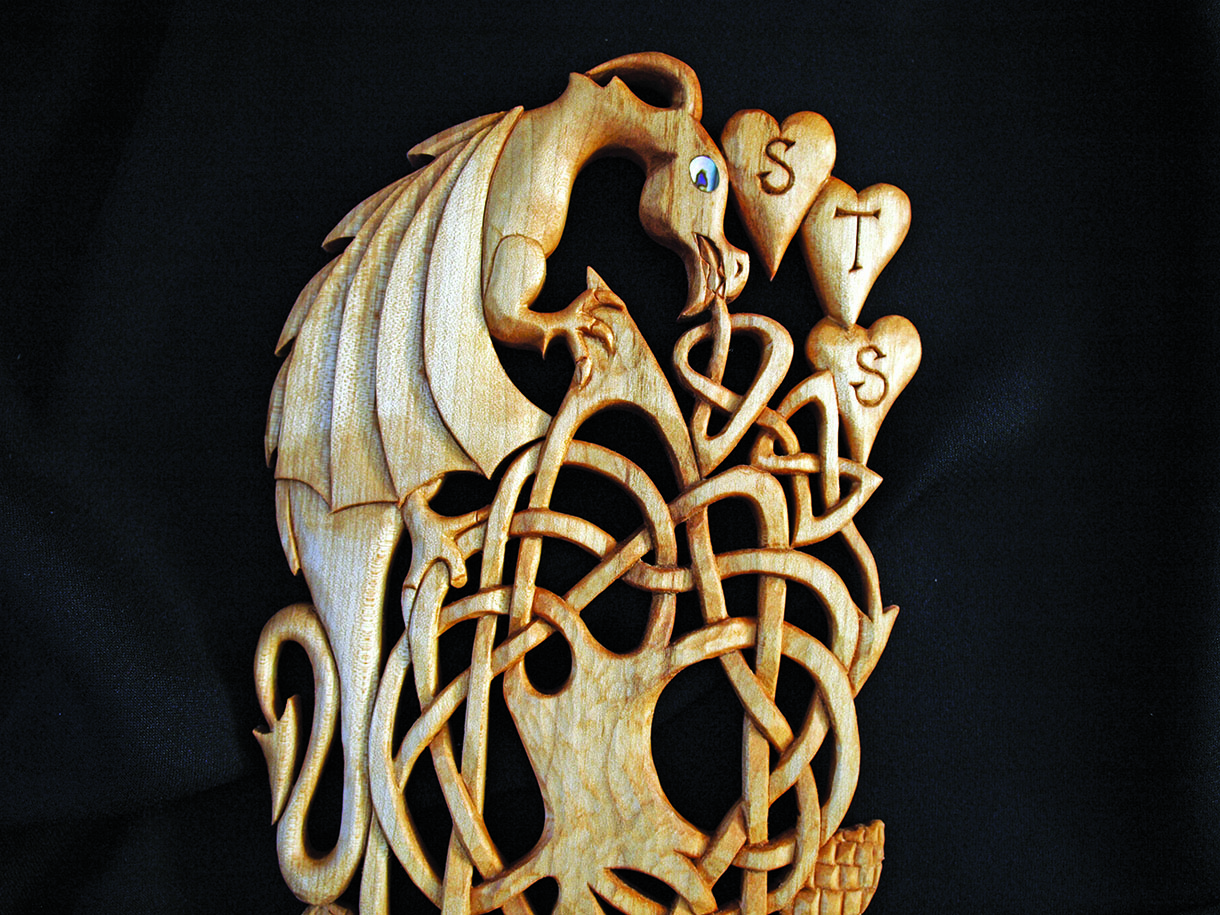 Because I am a lovespoon carver who specialises in the Welsh style, I am often asked for the Welsh flag dragon to be included in many of my designs. Symbolising Welshness, a Welsh connection or simply as a symbol of strength and protection, the Ddraig Goch of the Welsh flag makes for a versatile design symbol. As a Welshman myself, I can’t fault the sentiment, but at the risk of skating out onto some very thin ice, I have to say that I find its use a bit clichéd. When I see it on giftshop-type lovespoons, it frequently appears disappointingly ‘tacked on’ to the design and often looks more than a little bit clumsy. Over the years, I’ve had a lot of fun designing my own dragons, which represent the many duties of the flag dragon while lending a bit more harmony and elegance to the final design. After a bit of an awkward beginning where I was frequently inspired by existing examples such as the dragons of the SA Brain and Felinfoel breweries and the sublimely stylised dragon of Cardiff, I finally grabbed the fictitious fire-breathing lizard by the horns and began designing my own from scratch. It is my hope that this will appeal both to lovespoon carvers looking to expand their repertoire and to carvers from other disciplines, who might be looking for some inspiration and project ideas. While many of these designs have been created for the peculiar 1–2½ dimension carving common to lovespoons, most can be easily adapted to suit 3D sculptural type carving.

Some things to consider:
The space
How will your dragon fit into the available space? Is it going to blend in among other design features or will it be the focal point of the design? Will it be sinuous and lively with motion or will it be fairly static and regal? Will it snake through the design or will it be more powerful to locate it in a particular area of the design? To illustrate several of these ideas, please study the following four pictures.

A very simple dragon twines along one edge of the cutaway section through the handle. It’s kept minimal on purpose meaning the dragon isn’t overwhelming and must be sought out by the viewer. The idea here is to blend it in as an equal part of the design 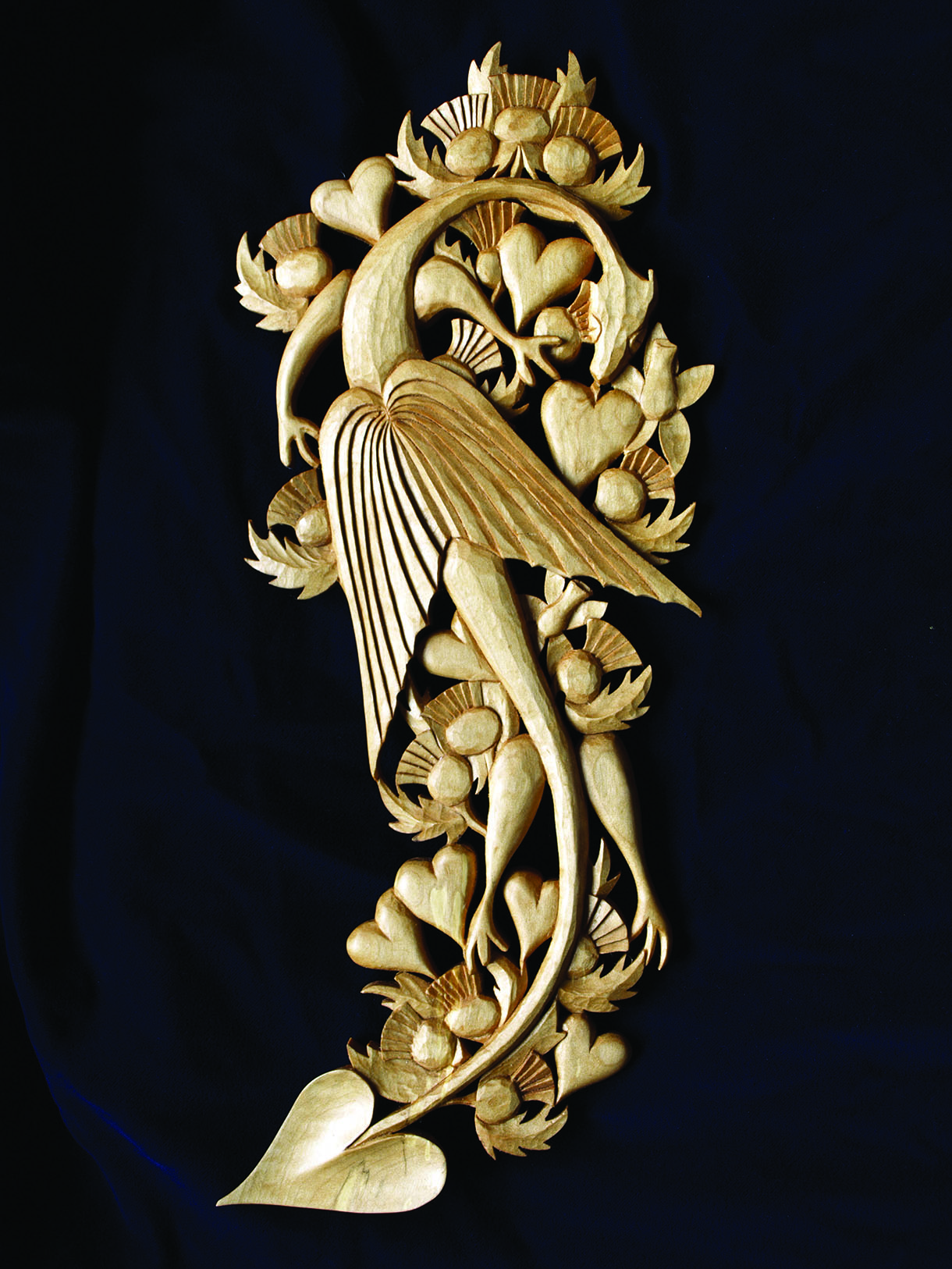 In the above picture, the dragon still sweeps through the design, but has now become the main focal point.
The dragon is flying above a field of hearts, thistles and is visually brought forward to create that particular optical effect. Because its wings create a large and powerful draw to the eye, the rest of the body is kept sleek and sinuous to allow the background to regain some visual balance 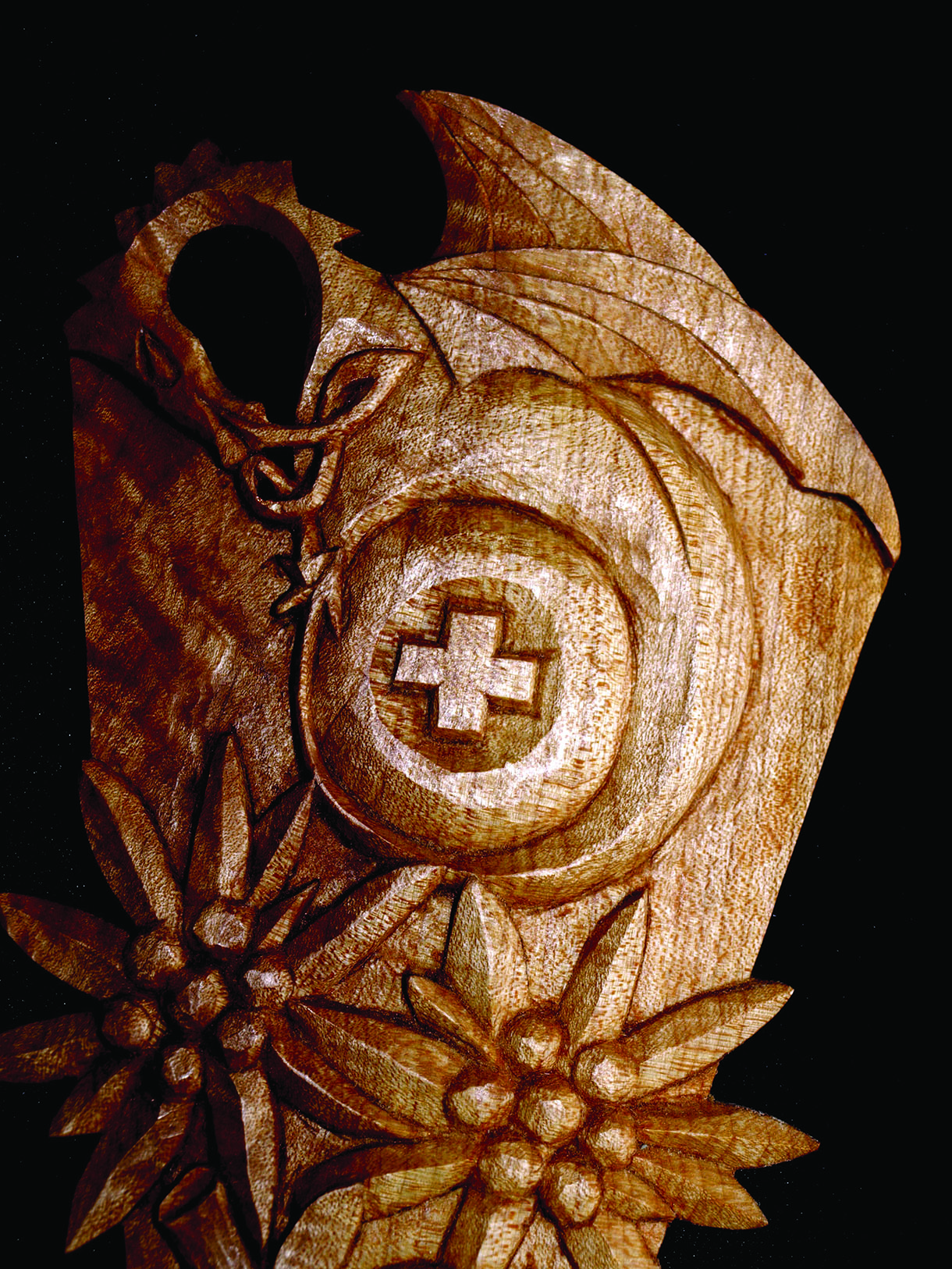 The dragon acts as the crown of the spoon, but is not an overpowering element of the design. Locally focused, the dragon does not travel throughout the design, but has a specific purpose of enveloping and protecting the Swiss flag carved at its centre 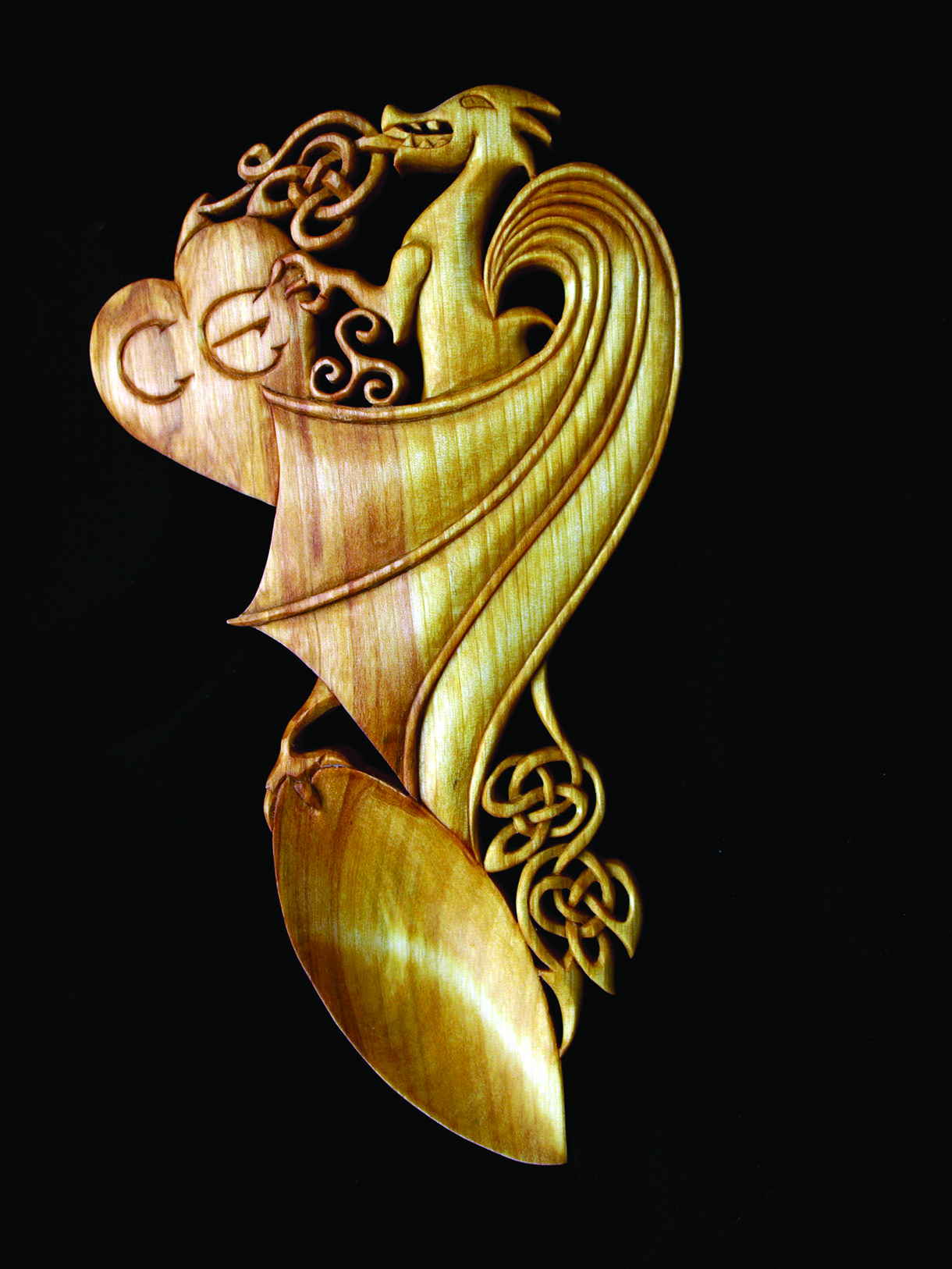 The fourth spoon features a design where the dragon has become the main feature. As the core visual element,
it is also the most eye-catching. While the heart acts to balance the design and the ‘egg-shaped’ bowl anchors it,
the powerful sweep of the dragon’s wing draws the viewer’s eye strongly toward the centre of the beast’s body

What kind of dragon
Dragons can be surprisingly expressive. From benign and beneficent to fearless, powerful and even to ferocious and arrogant. Subtle positioning and facial rendering can make a huge difference to the dragon’s physical outcome. Unless your purpose is overtly nationalistic, you are probably best to avoid creating an excessively vicious looking dragon and steer more towards one which is simply proud and fearless. That said, I rarely make ‘happy’ dragons as it seems a little disrespectful… they’re not bunnies after all! Regal always seems the best description I can think of and what I aim for as much as possible. 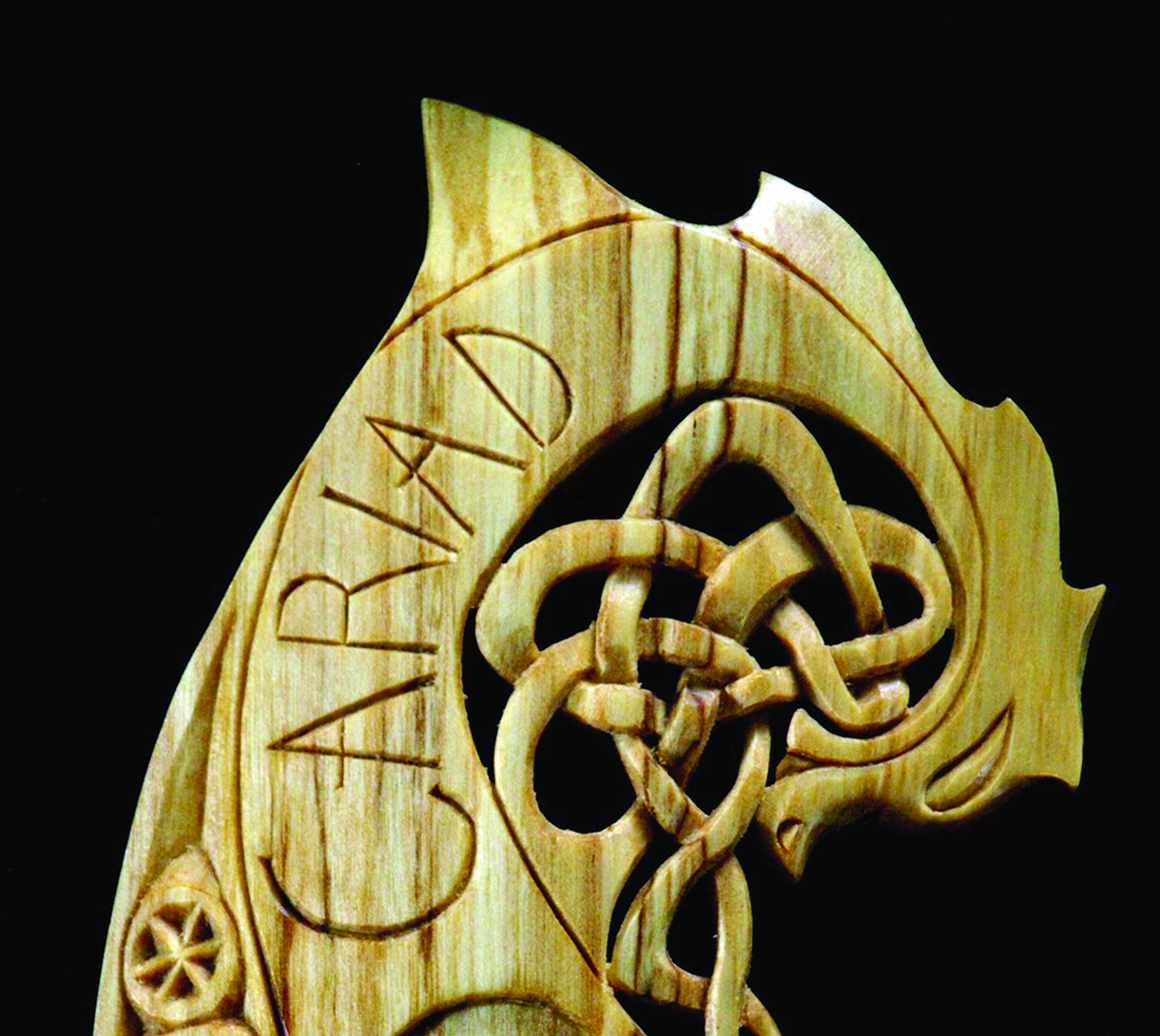 This dragon is one of my favourites. It has that feeling of being regal, but without conceit or nastiness. With its head slightly bowed and the knotwork of its tongue between its head and chest, it seems to be less aggressive while still remaining strong and resolute 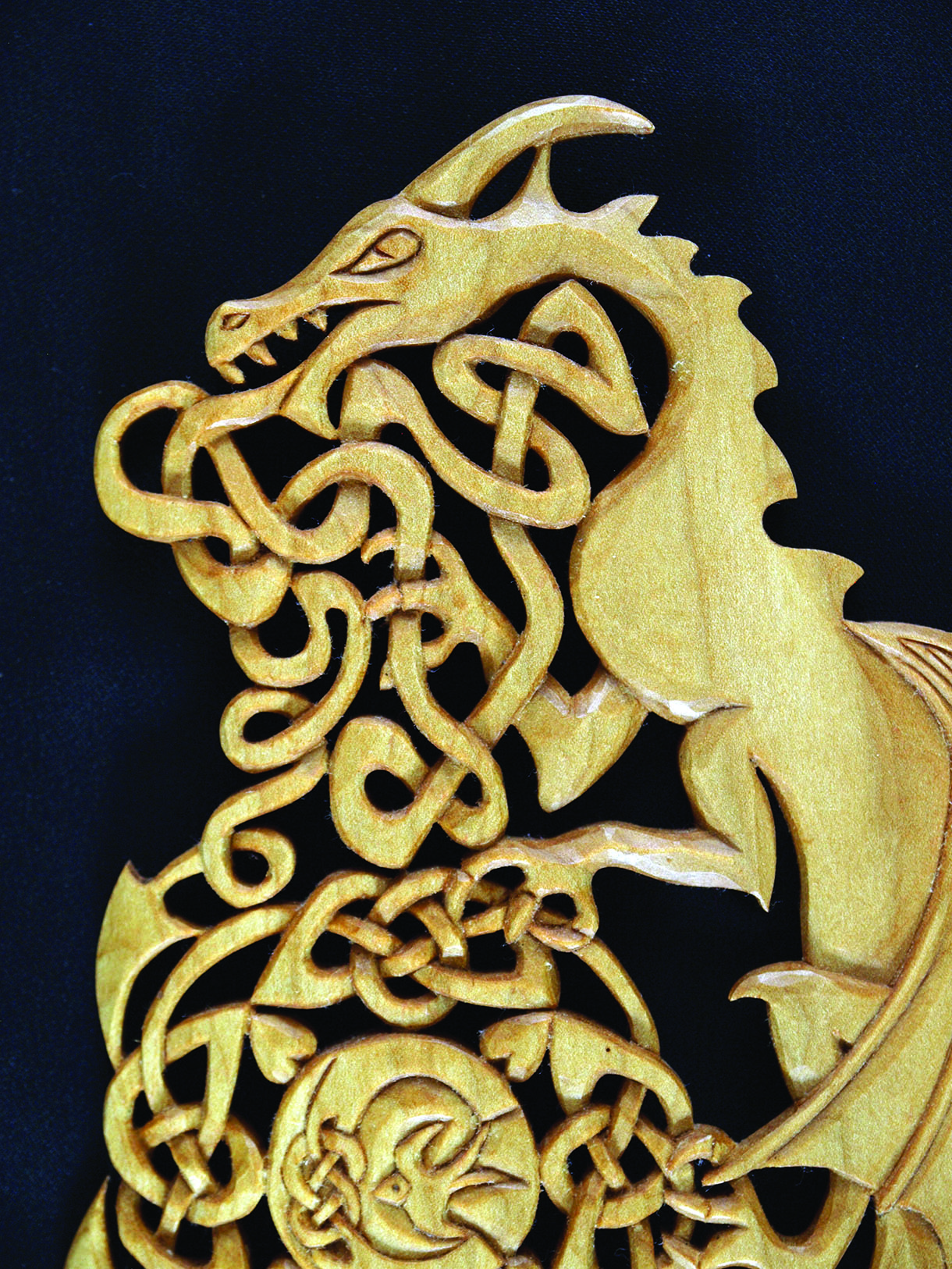 Here the dragon appears slightly more enigmatic. He is definitely not to be trifled with, but there is no indication that he is unnecessarily ferocious. His tongue forms a knot, which envelops the central design, a design which is further protected by the location of the dragon’s body 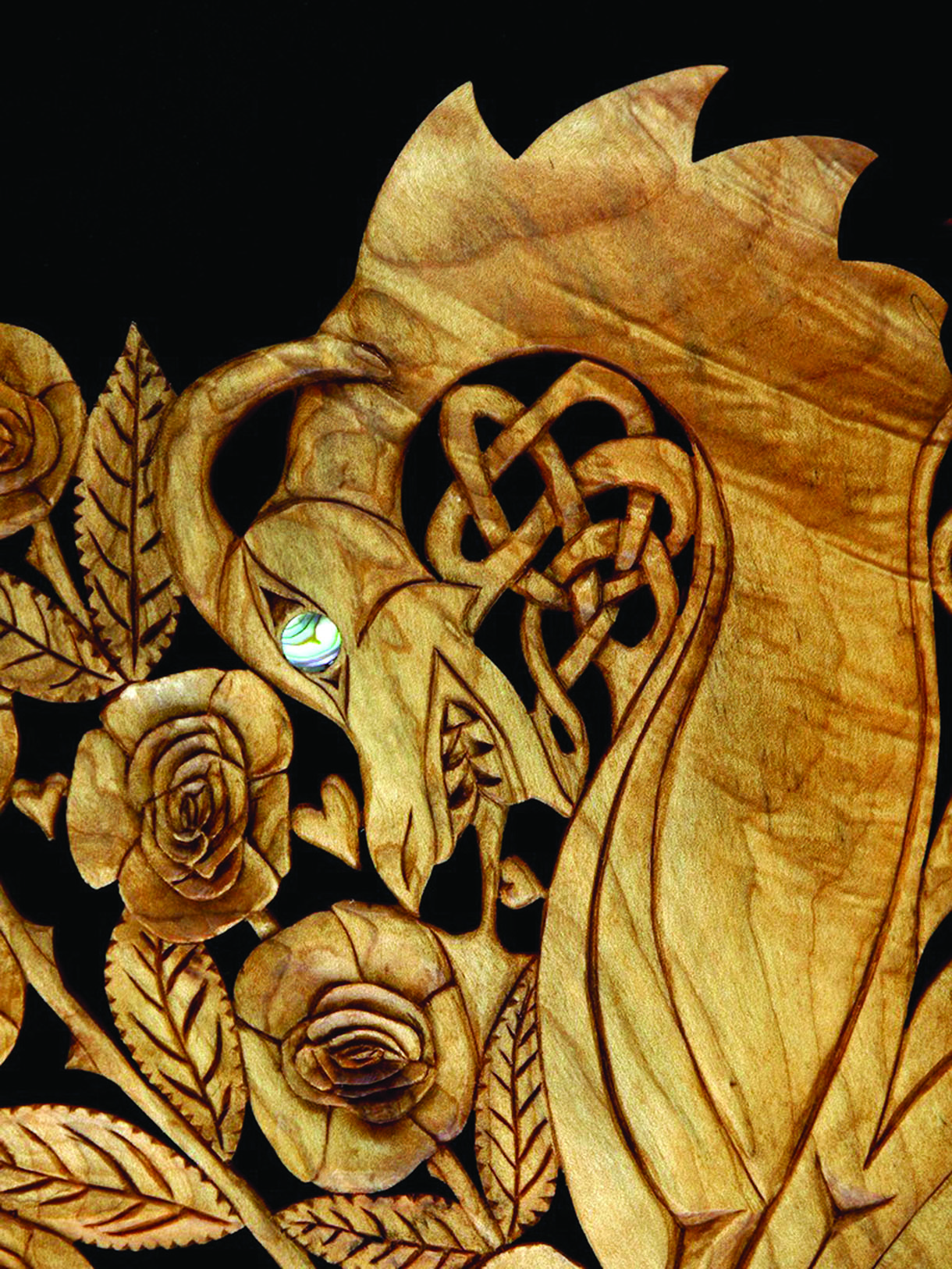 This dragon symbolises a mother’s love for her family and the fierceness and she is prepared to protect that love.
The dragon’s bowed head among the roses illustrates he is not a danger to the family, but his expression indicates he won’t tolerate anything that is

What style of dragon
There are many versions of dragon legends and types around the world, but the two main types are Asian and European dragons. The Asian dragon tends to be more lithe and beneficent, often a symbol of good-fortune and celebration. The European dragon is generally bigger, more vicious and to be feared. Representing either type of dragon offers up a host of stylistic possibilities ranging from realistic to highly stylised. Depending on the type of detail you are prepared to get into, the bodies can be smooth or
heavily scaled, the wings flat or highly curved and the faces relatively plain or highly detailed.
I generally try to plan the dragon to suit the rest of the design. If the other elements are going to be busy and complex then my dragons are more detailed and involved. If the design is simpler in nature then I tend to stylise the dragons a lot more.

This plain design in the Celtic style of the Book of Kells is straightforward and stylised. The wings and scales utilise a simple, low relief ‘ramp’ type carving to build the illusion of depth. The head and feet are simply marked out with shallow chamfer-type cuts. As with most Celtic art of the period, the design suspends belief by making use of highly stylised and proportionally incorrect features, which are as important for their shape as they are for their anatomical inclusion 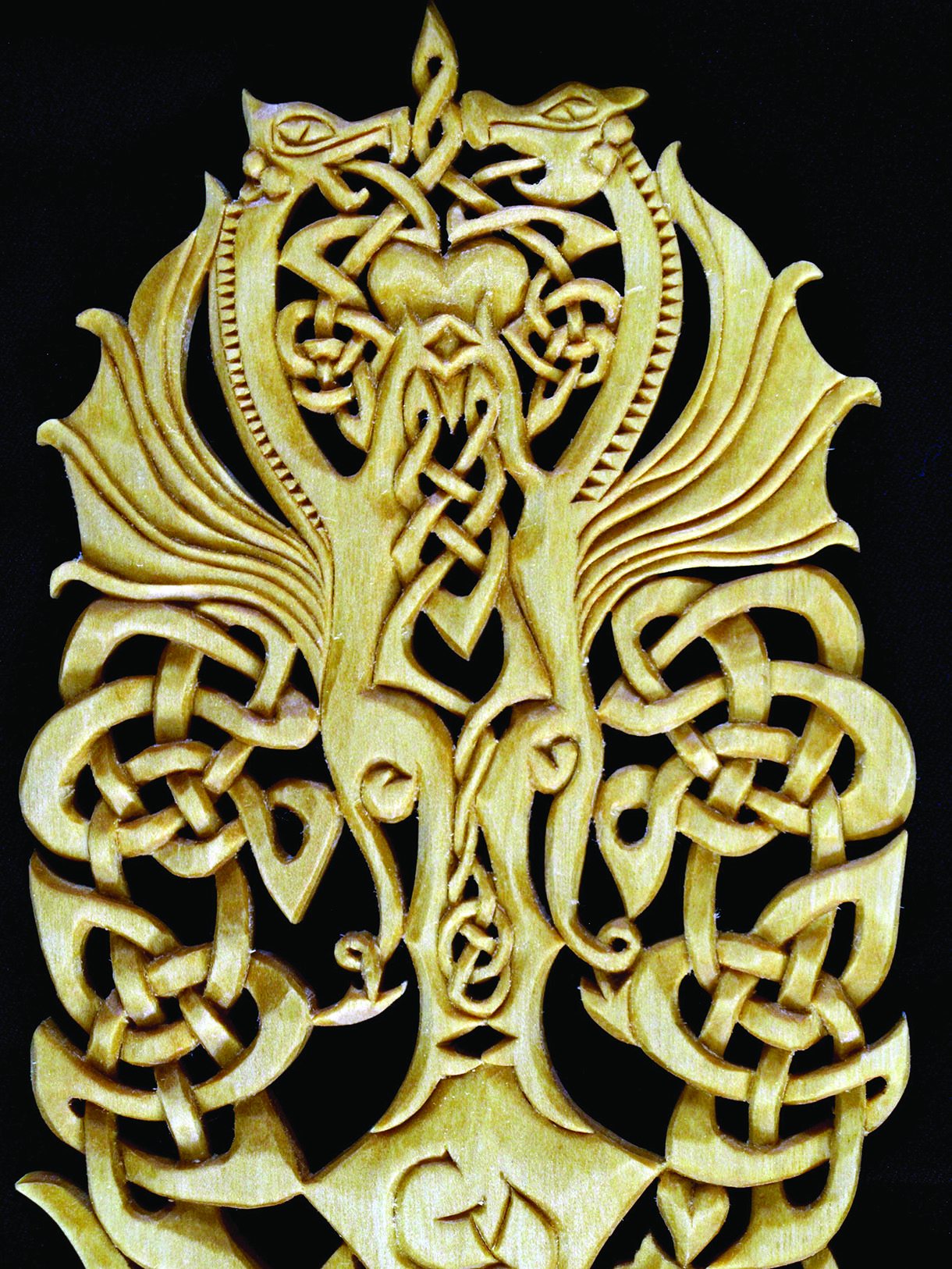 This slightly older Celtic design from the European continent is less abstract than the British dragon. While still in a flat form, the dragons are more realistically portrayed and are more readily recognisable. They also appear more sleek and lizard-like and can be easily rendered in three dimensions 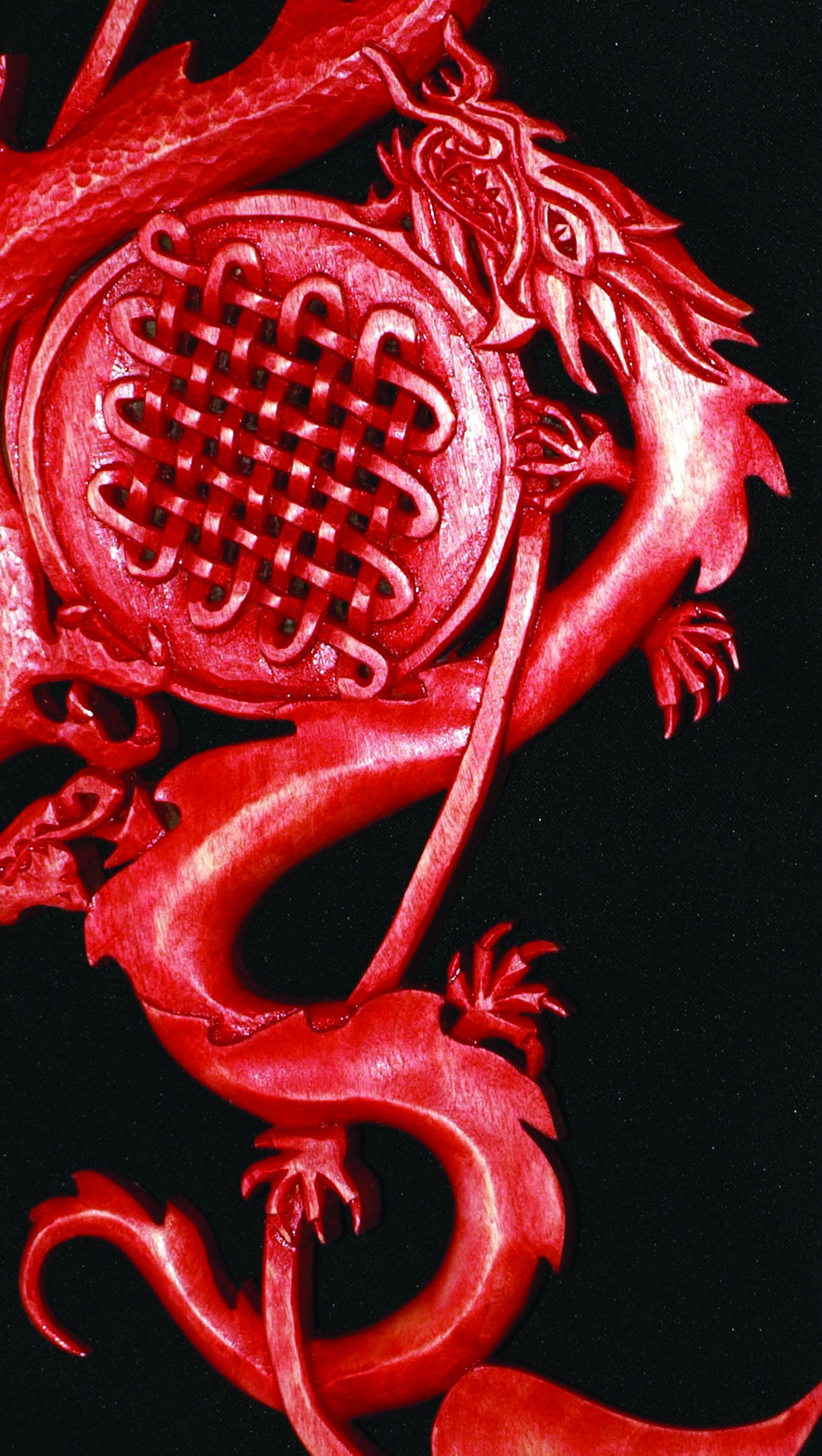 A typical Asian dragon is designed with its serpentine body, recognisable for its lack of wings, its broad head and large whiskers. Because it was carved for a wedding, I took the further step of staining it in lucky red to bring as much good fortune as possible to the happy couple. Because the body is twisting throughout its length, this particular dragon was carved in full 3D 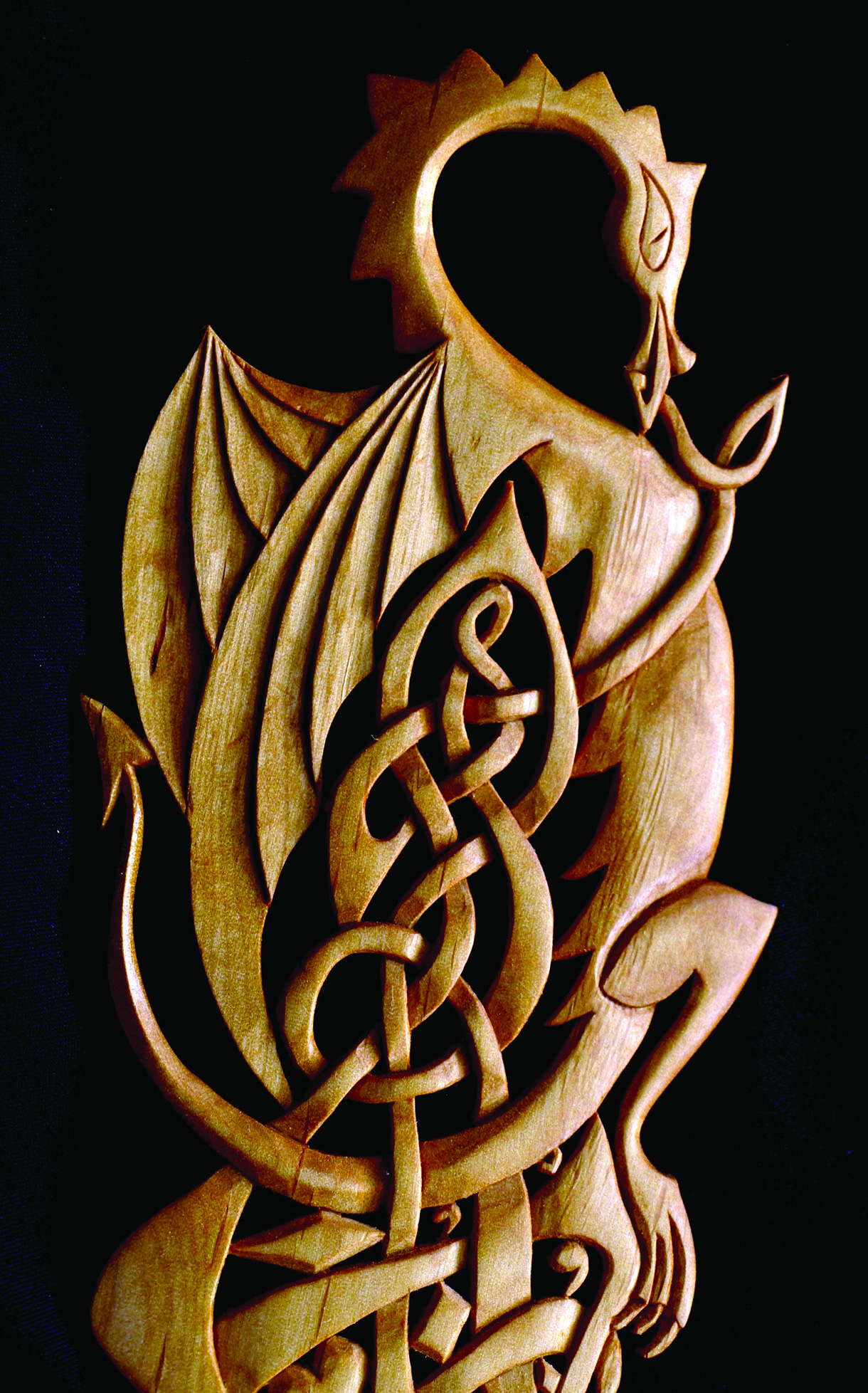 The classic European style of dragon is symbolised with its long curving neck, powerful wings, and a lizard-like body. Because of its position at the crown of the design, it is shown with its chest pushed forward and wings swept back shielding and protecting the design below. Although it is basically anatomically correct (minus the upper arms), it is again highly stylised to represent the various parts without excessive detailing. To match the extensive Celtic knot-work the dragon is smooth, sleek and relatively unadorned

This dragon, by lovespoon carver Laura Jenkins Gorun, is somewhat unique as it represents a capitulating dragon shown at the moment of its defeat. Carved in 3D, the dragon’s head is bowed with its flames extinguished. The once powerful wings are now folded and limp with its weakened limbs struggling to find purchase on the surrounding ground. It’s not easy to portray such a dominant creature as being so beaten and vulnerable

Experiment
The nice thing with dragons is that there is no right or wrong with them so there is plenty of room for experimentation with design and for adventures with the carving. When I stumble onto a particularly pleasing design, I will often try variations on the theme, looking to see what works and what doesn’t. Some of these trials are successful and some aren’t, but what inevitably happens is I am able to refine the design to a point where I am proud to show it in public. 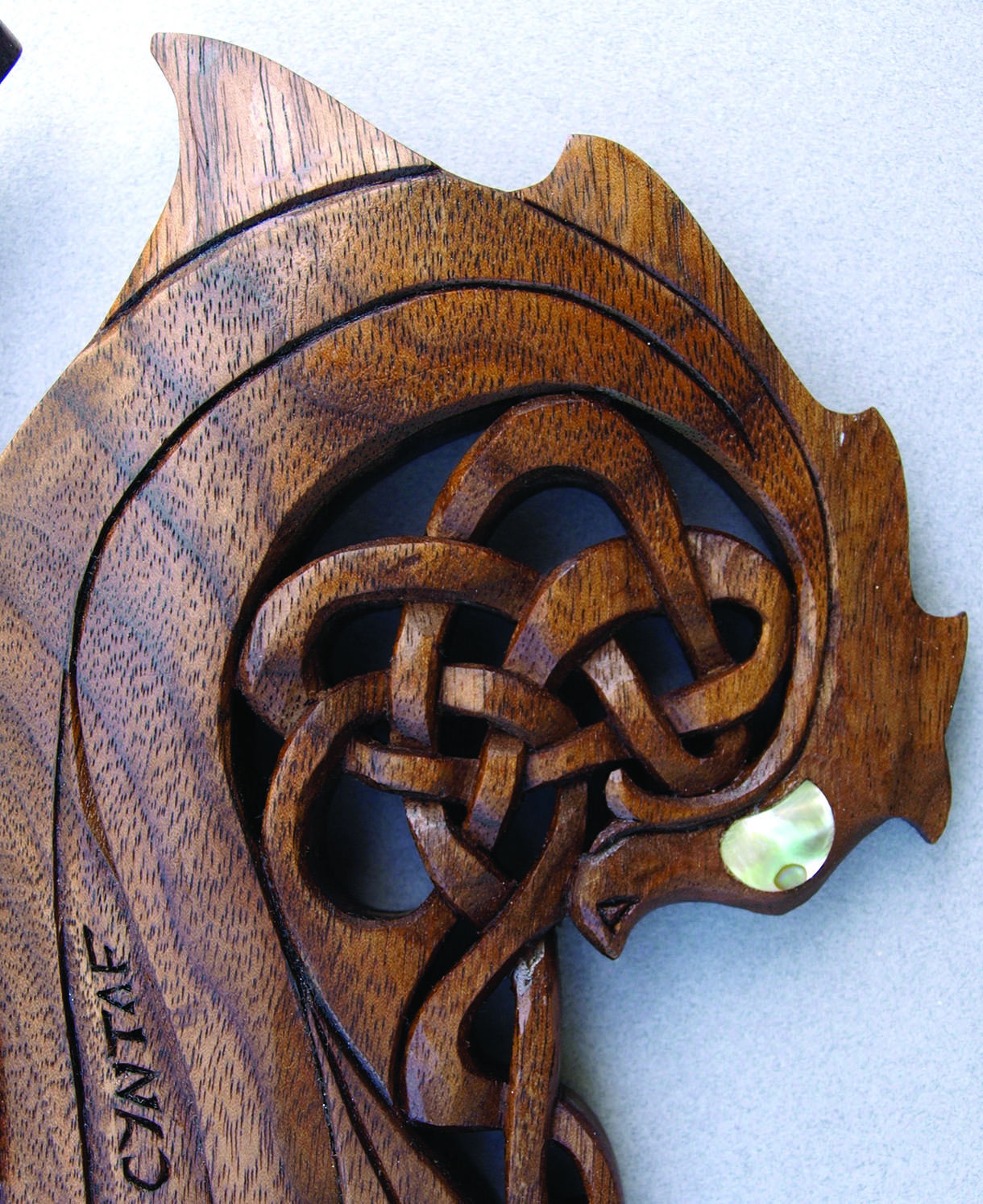 This elegant dragon went through a number of incarnations before I settled on this particular rendering. I was very happy with the way it managed to balance a regal countenance with a feeling of approachability, with its potent strength expressing a sense of gentleness. It might not be everyone’s cup of tea, but for me it is a very successful dragon 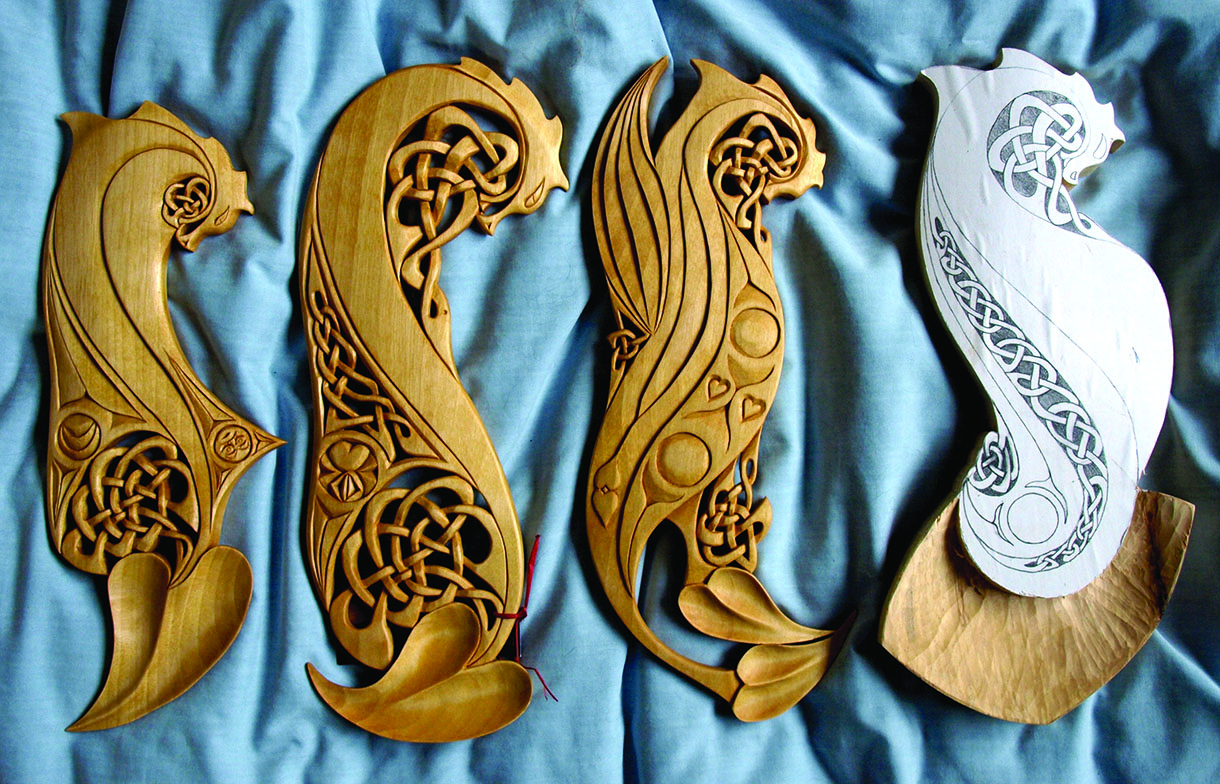 Once I was satisfied with the dragon’s head, I began a series of experiments trying a variety of body structures and patterning. The dragon became heavily stylised with the wings and bodies often represented by simple sweeping lines. Some designs were left largely unadorned, while others made great use of symbols and artistic flourishes. Although the spoons all began basically the same at the crown and by the time each arrived at its bowl, the artistic differences were significant.

Gradually, the design evolved into something which I think might the best representative dragon I have achieved thus far. Relying on heavy stylisation of the wings as they sweep around the body, this dragon blends an abstract and realistic form in a way that doesn’t jar or defy believability. It is a long way from the flag dragon, but no less effective as a symbol of pride, strength and protection

Have a go!
To finish off, here are three straightforward designs for you to begin practicing your dragon carving skills with. They can be carved as part of a lovespoon or as a stand-alone carving. Use a photocopier or graph paper to enlarge them to whatever size you feel comfortable working with, but I ask you to keep in mind they are for practice and gift giving only. Please don’t use them for professional or commercial purposes.

The Celtic dragon can be carved from thin timber or if you are daring, you can use slightly thicker wood and carve a nice dome into the handle. I find this design works better with a lighter colour timber as the subtle details aren’t lost behind dark grain. This design could be easily adapted to make a nice ornament or brooch

I’ve isolated the Chinese dragon out of a much larger and more complex carving. You can choose to keep the ‘stem’ he is climbing or remove all the other extraneous material to just leave the dragon behind. If you decide you’d like it lucky red, I used a shoe polish to get the right tone as paint or stain were inevitably too candy coloured 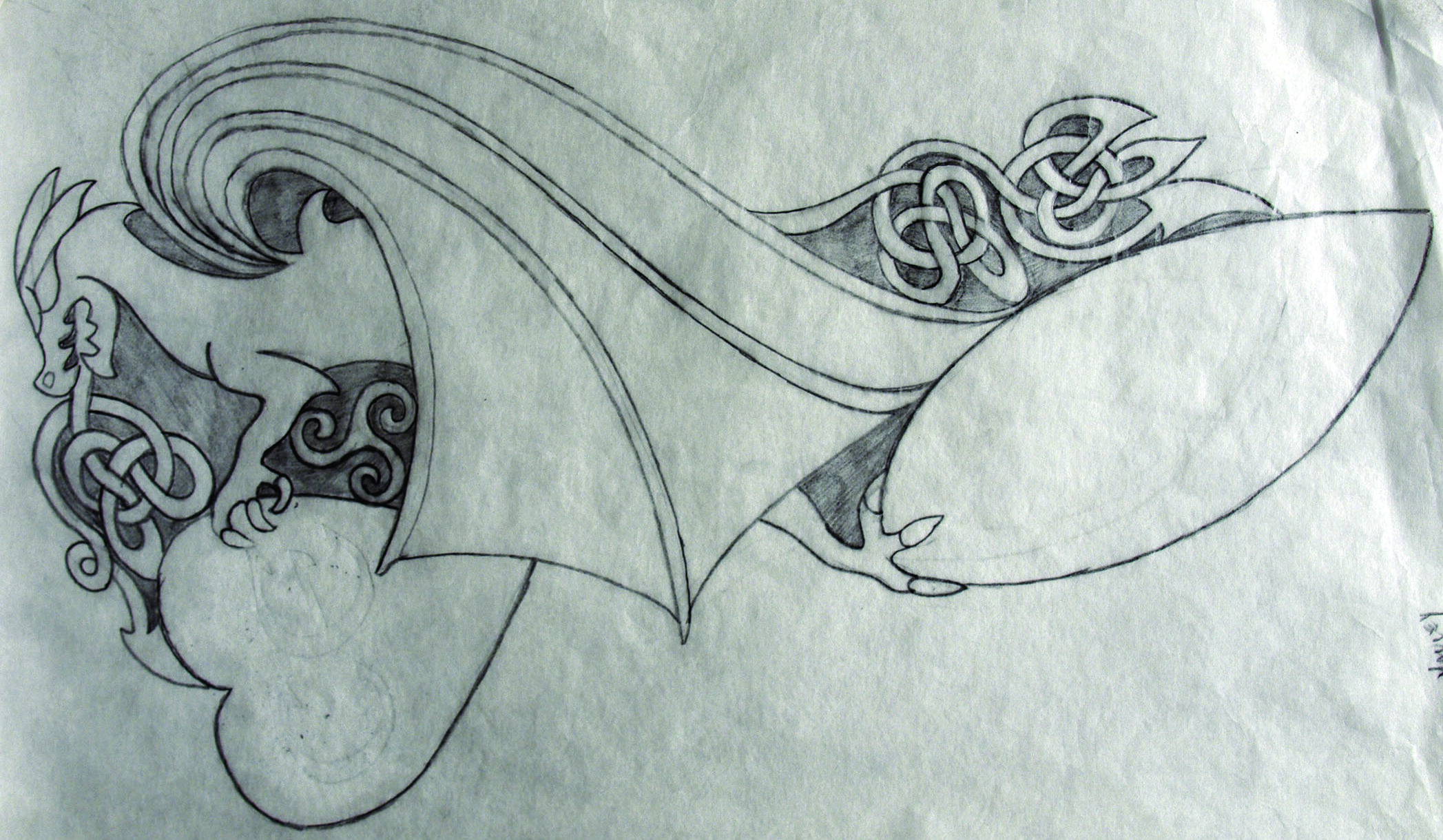 Although heavily stylised, this simple dragon could be fancied up with some scales and a bit more detail around the face. You can make him in 2D like I did, or use a slightly thicker timber and go for the full 3D effect. If I were to do this one again, I would likely include a prominent set of horns at the top of its head

Even though this doesn’t begin to scratch the surface of what is possible with dragon designs, I hope that it gives you some inspiration to have a bash at a dragon or two of your own! Dragons make a marvellous design feature on anything from buttons to table legs. They’re everywhere, you just have to  be willing to see them!