The Mechanics of Joinery:
Douglas Coates explains the art and science of joints 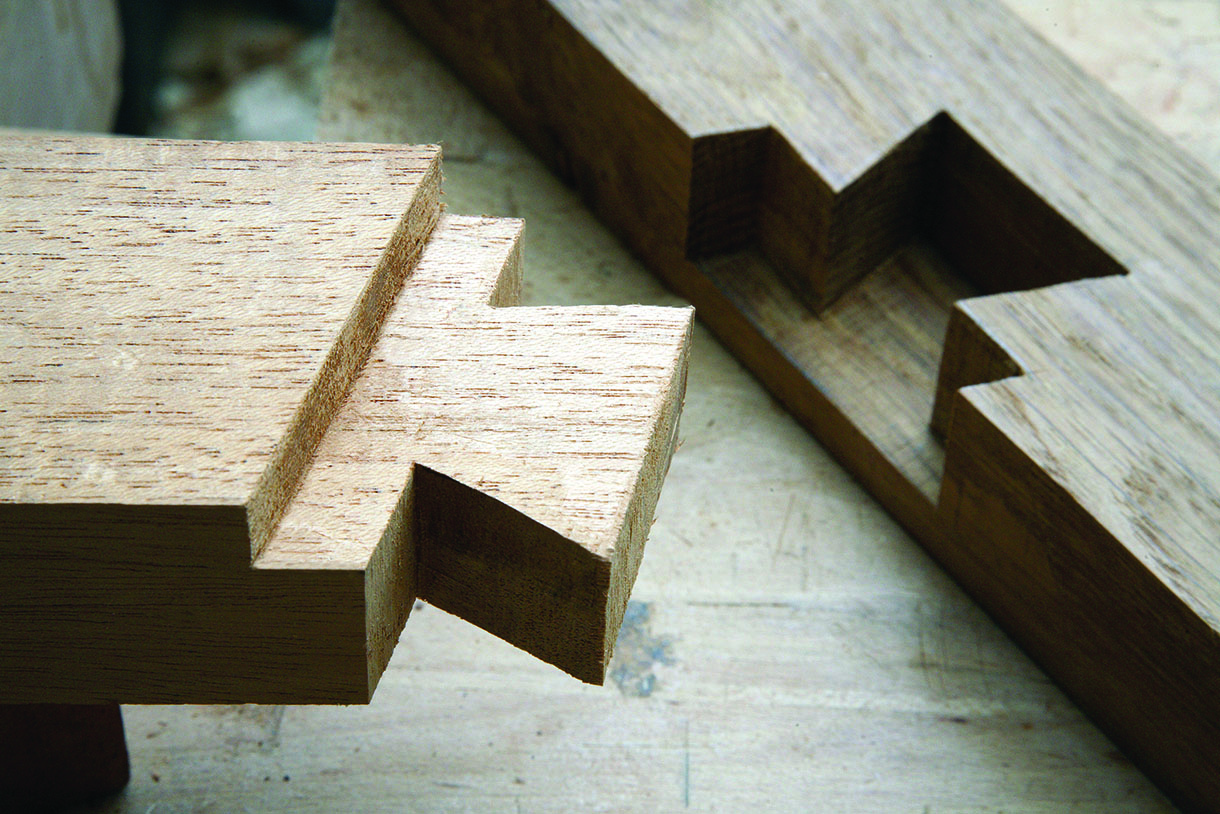 Douglas Coates explains the art and science of joints

What’s in a joint? I mean, what’s really going on in there? We have a core portfolio of the joints we use most, and they are long established solutions to different structural challenges or demands. We learn our ‘good practice’, then call on experience, intuition and maybe habit. I might think of intuition as ‘dark knowledge’, rather like dark matter. I can’t touch it but it’s come from everywhere and I use it a lot.
But it may be that we have been steered more towards the process of cutting perfect joints without thinking so much about how they work, how well and why.
In this article I want to take a closer look at the mechanics of what we do. If we think more about the forces and loads in and around a joint it can help us to choose the best workpiece, the right joint and alter the joint’s basic design in order to work better in that single application. I’ll aim to do this in an applied rather than pure way, because our science is also an art. What’s going on in and around a joint; why does it work best there; what variables are most critical? I think there’s a different way of looking at cabinetmaking and the joinery involved that can influence and perhaps improve the outcome – a wider perspective is never
a bad thing, so let’s take a look.

The mechanics
Our world is soaked in forces and those forces place loads upon everything around us. Load is everywhere and we deal with it without much thought. So when we build a table or bookcase we’ll be providing for the extra loads that item will see in use. Gravity accounts for a static ‘background’ load, and we add static and dynamic loads through use – as we sit on the chair or place books on the shelf.
Before looking at what is going on within the cabinet we make, I need to mention some of the main terms to avoid confusion. When we apply a load to anything we introduce stress into it. Stress causes strain which is a distortion within the material. In most materials we don’t notice strain but it is always there, even to a micro-degree (in a diamond for example). Materials distort in order to contain the energy that is causing the strain. So when you see your aeroplane’s wing flexing, remember that’s a good thing. When we hit the limit a material will fail, sometimes quite dramatically. We’ve touched on elasticity, which we think of as stiffness. Wood is anisotropic – its physical properties are markedly different along each axis, with excellent performance along the grain but challenges for us in every other direction. Wood is stiff but also elastic perpendicular to the grain (where a bending force is at right angles to the grain); it is strong along the grain in both compression and tension. It is quite weak in the other directions, and of course we work with and around these known properties. Stiffness should not be confused with strength. The physical properties we deal with are strength, stiffness and hardness. To these properties we introduce our variables: tension, compression, torsion, shear, bending… often in combination. 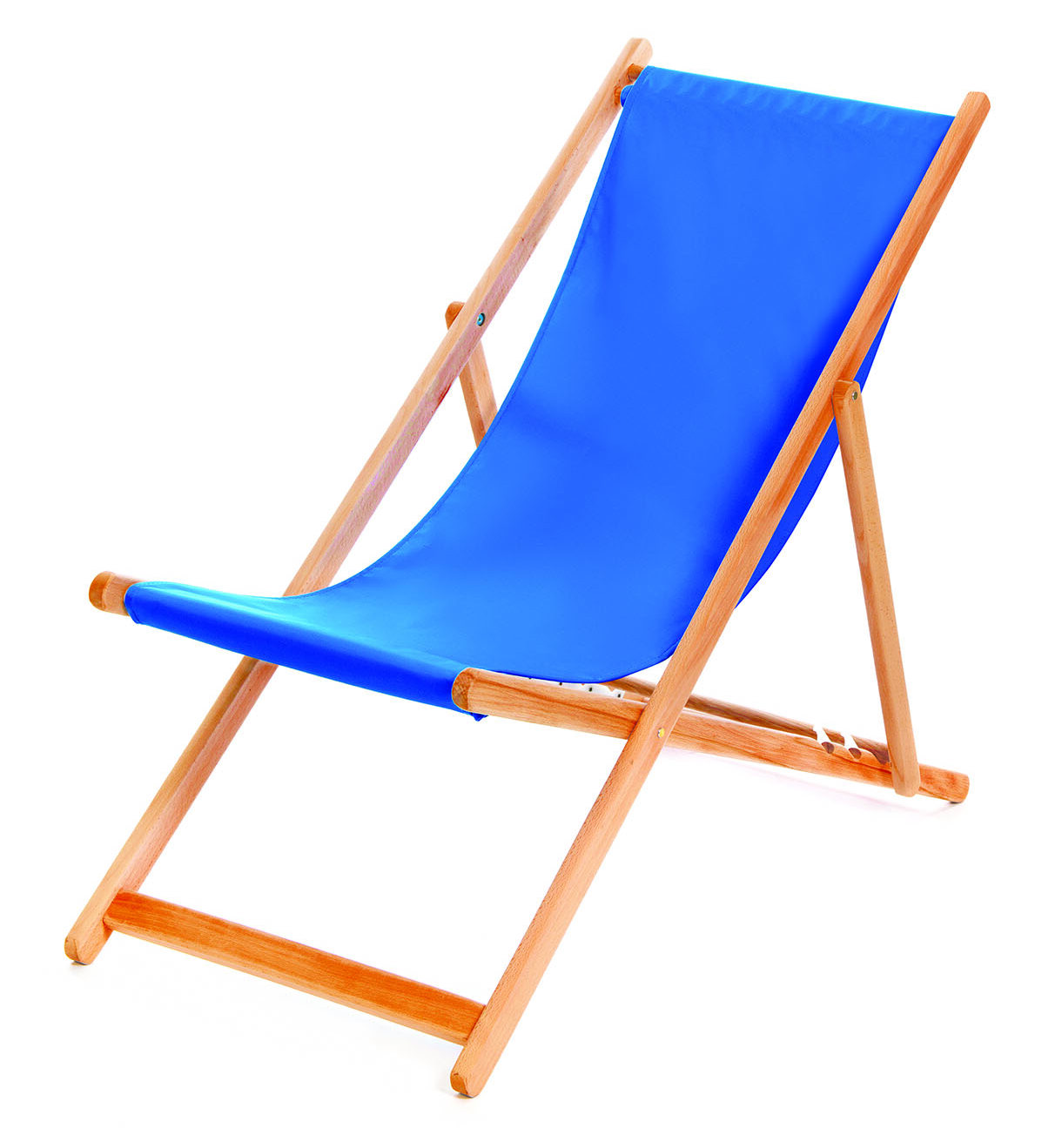 The load is mostly vertical, but there’s not one vertical component in the structure. It folds flat and adjusts in height. It’s light, cheap and it works – considered by many to be a design classic, for good reason

We work with an organic material and no two species or pieces are the same. They do have similar properties but the values of those properties vary widely (from ebony to ash, say). Even from one board of ash to the next there will be differences and we get used to selecting the pieces for the application. Obviously it’s the grain structure that distinguishes wood and as we move off the axis of grain we face challenges. 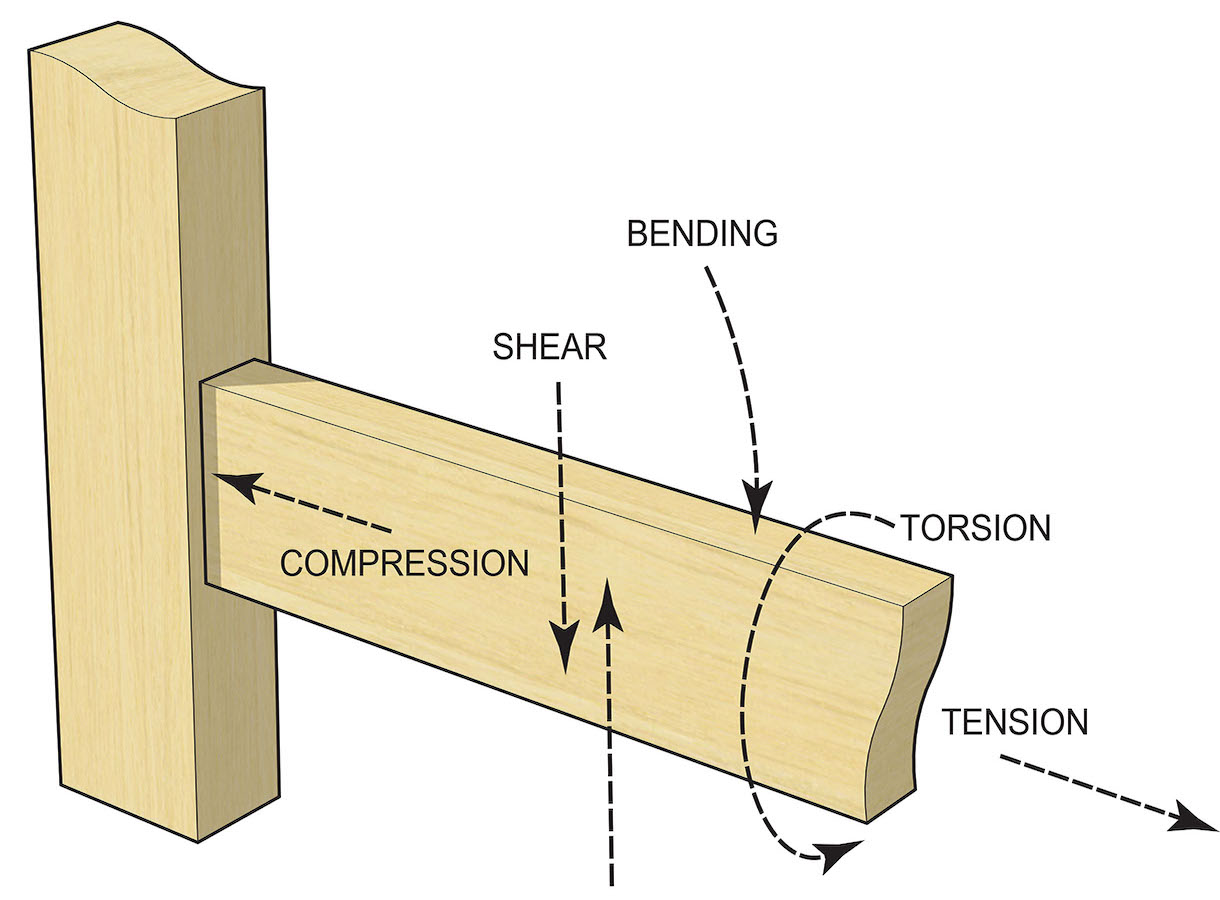 It is useful to break loads down into different components, and to have some idea of relative magnitudes. From three sources (gravitational, static user, dynamic user) the forces on a joint become more complex. We don’t measure these things but we need to get a feel for what is going on 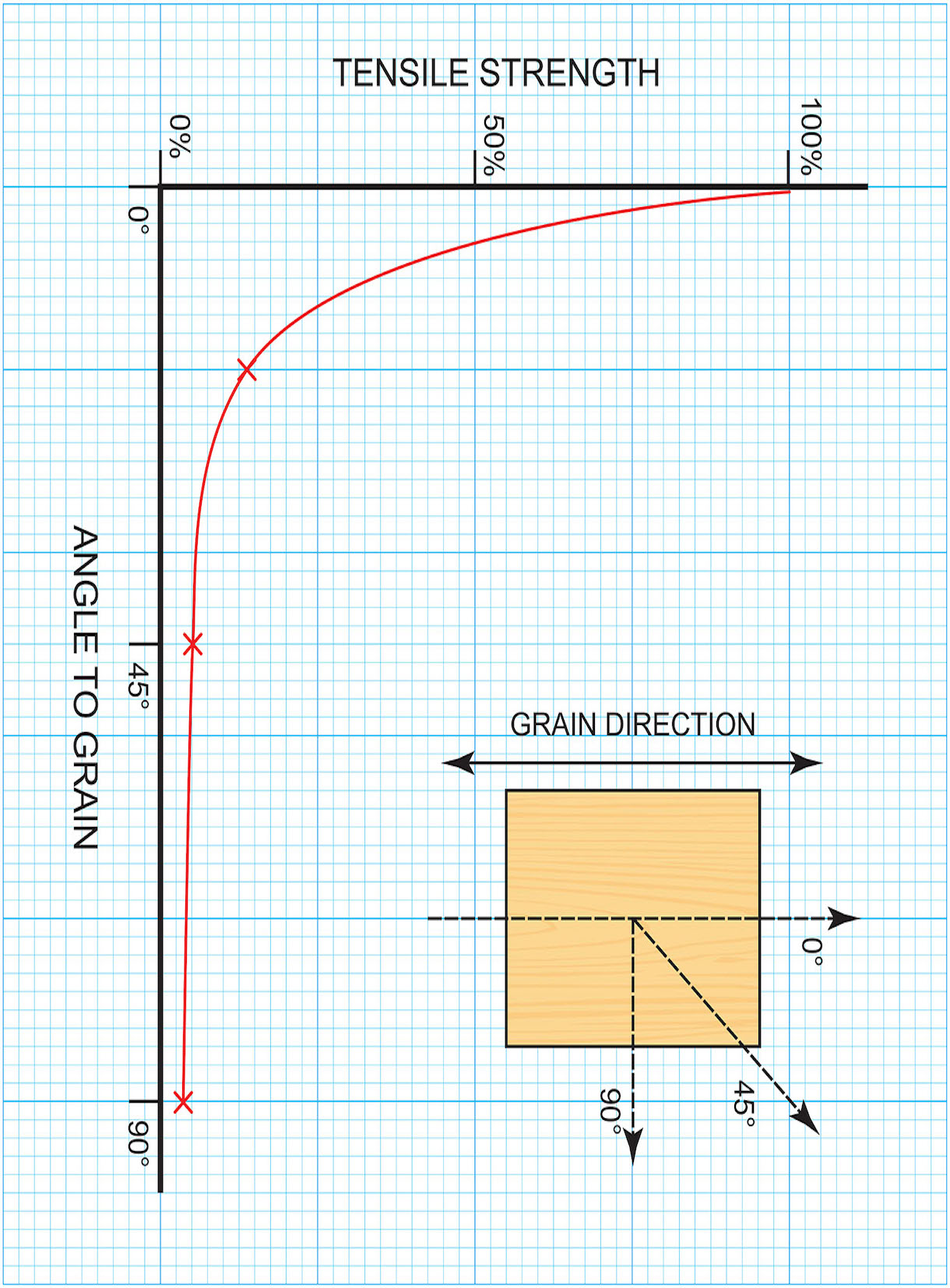 It is alarming just how quickly tensile strength falls away as we move off the axis of the grain. At just 10° off, tensile strength has dropped by more than half. At 45° it is around 5% of its on-axis value. These results will vary a little from one wood to the next, but it is broadly indicative of the dramatic loss in tensile strength as we go off-axis from the grain. (Note: this graph is indicative of a range of hardwoods, not a numerically precise representation of one sample)

Where does ‘load’ go?
The pieces we make are ‘open systems’. They are subject to a static (or ‘dead’) load due to gravity but also wood movement, and dynamic or ‘live’ loads through use. The system is the structure itself – the cabinet carcass or chair frame. It is an open system because it relies on a connection to the outside to work – a floor or wall most often. Thinking of our cabinet or chair as a system leads nicely into the feel that there is connection and flow – we are creating a circuit of sorts. The loads that our furniture will see in use will be borne through the structure and transmitted to the floor. I’m sure that the idea of load ‘flowing’ through a structure is where a lot of our intuition comes from. There is insight to be gained here: load causes stress, and that stress must be transmitted through the system and out. Our joints are therefore connectors. Just as a decent plumber will minimise tight corners and other restrictions to flow, we are seeking to do the same but in a structural sense.
Our cabinet carcass or chair frame has a lot in common with bigger structures. I find it interesting to look at a roof or a decent bridge, and imagine the loads ‘flowing’ through that structure (I didn’t say I was normal).
In this approach to our subject, the joint is (at best) a part of the whole – it’s really just a necessary connector, so how well it conducts stress is what matters (aesthetics aside, of course). Let’s hold on to this a moment. We’re aiming to transmit stress through ‘the system’ and our joint is the connector, so it must conduct stress very well – ideally as if it wasn’t there. The fact that we use joints because we need to turn sharp corners (there are other reasons but turning corners is a big one) defines the challenge because inside the joint we have discontinuities, just at the point where stress is trying to ‘flow’ round a sudden corner. If we made our joints in steel we’d have a discontinuity in there. But in wood with grain, we have a challenge on a different scale.
Now, we can think of a joint in three parts: an input component, a membrane or interface (usually glue) and an output component. Gravity provides a steady-state load in the background, but the dynamic loads in use give this sense of flow. Input and output may seem unclear (or even wrong) but in accordance with time’s arrow, one component always loads up before the other. In use, this direction may reverse or cycle but at any moment there is a loader and a loaded. The interface may be an adhesive or it might just be a discontinuity of material, surrounded by compressed fibres – a tight fit. The adhesive is a completely different material with different properties and needs to be considered carefully, and a bit later. 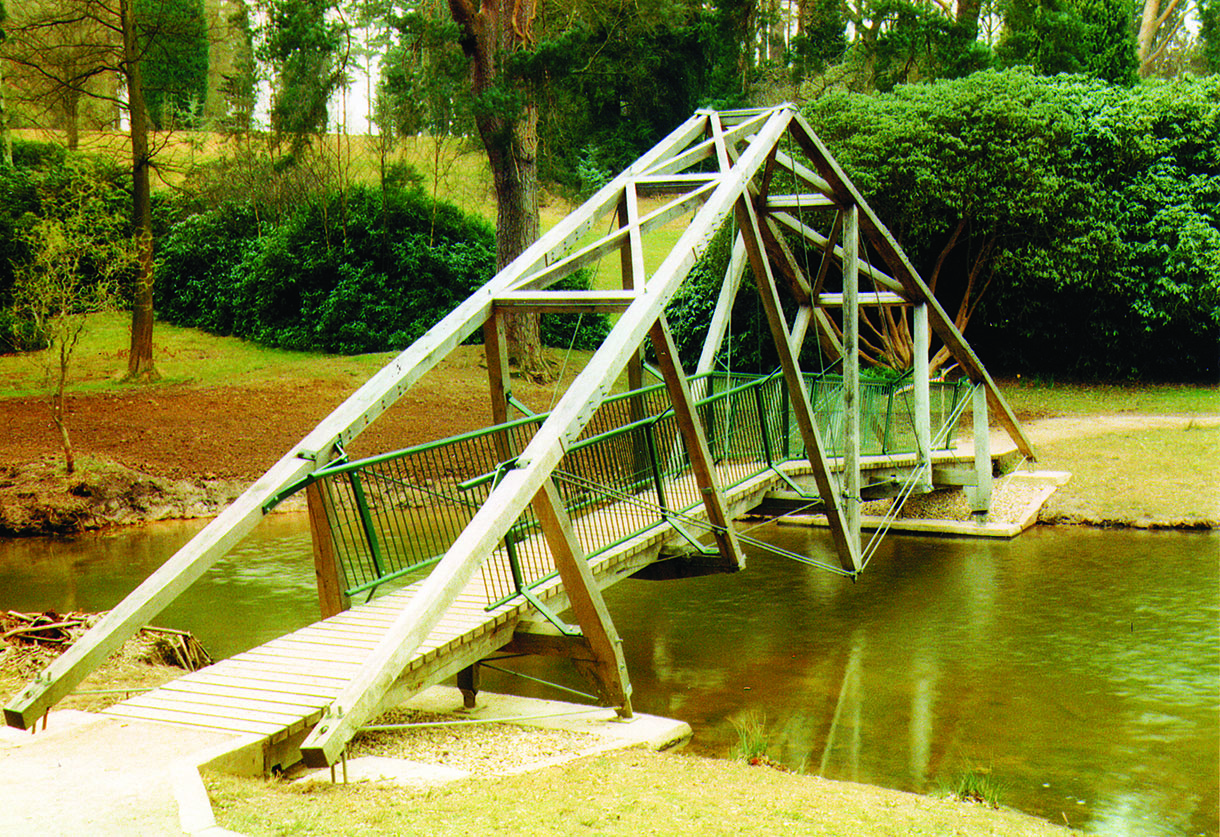 An inspired design, but it’s not too hard to ‘read’. Bending moments translate into tensions and compressions within structural members. I think Bach would have liked this bridge, with all its structural harmony and counterpoint. Designed by Mark Lovell Design Engineers and Richard La Trobe-Bateman 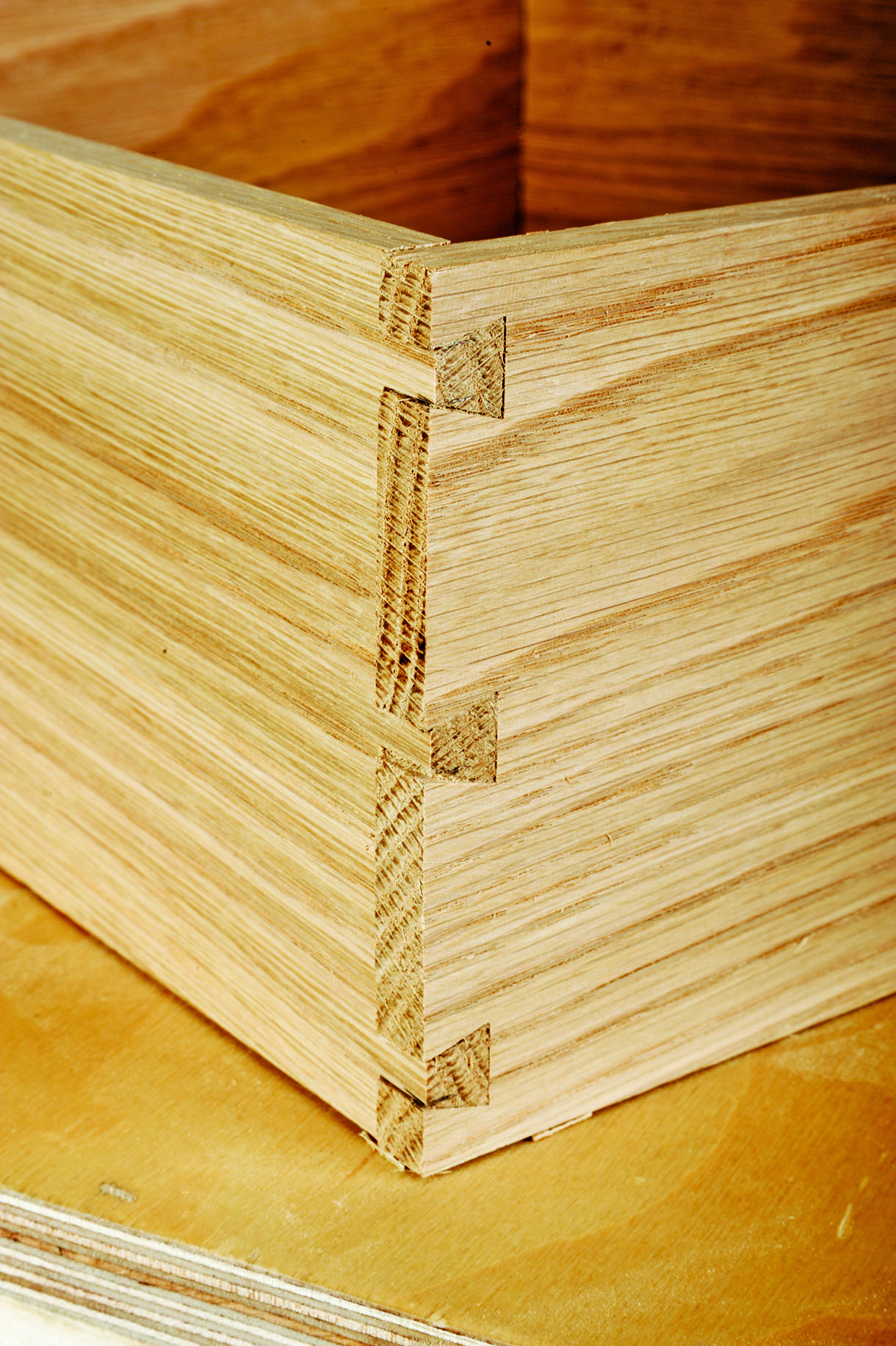 We actually expect stress to flow along the grain of one piece, come to a dead halt, then turn a sharp corner
while jumping a gap, thus finding its way into the next piece. And remember, no losses. What goes in comes out.
Is any of that reasonable?

The joint as a connector
So, ignoring the glue interface for a moment we can think only about shape within any joint. Optimising those shapes for the actual material is where we get the best of mechanical strength. We use grain to help us as it’s by far the dominant axis in woods – along the grain we get all the properties we need and as we move away from that axis, woods are generally downright weak. In fact the difference in strength along the grain compared with any other direction is so great that it determines how we design and scale joints.
In our joinery we mostly use two basic shapes, while chair-makers add a third. The two basic shapes are cuboid (a tenon, bridle, etc.) or trapezoid (a dovetail). The chair-maker will often rely more upon a cylinder, and it’s interesting to note that the loads relative to component sizes are very high in chairs. So what is it those guys know?
To help the joint transmit stress most easily (with least resistance) we want the maximum volume of long-grain joint material in there. But the bigger the tenon, the bigger the mortise of course so a balance must be sought. By extending the tenon along its grain we reduce the cross-section area of the mortise, hence causing less structural disturbance in the mortise component while making the most of the tenon’s strength along the grain, and increasing bond area. This looks like three wins.
We’re ready to get inside some joints now, thinking about the types of load that joints see in use, and the properties of woods that we exploit in designing each joint. In the second part, I’ll be looking at high-stress areas, bearing surfaces, angles, joint reinforcement, common failures, movement…and a bit about glue of course. 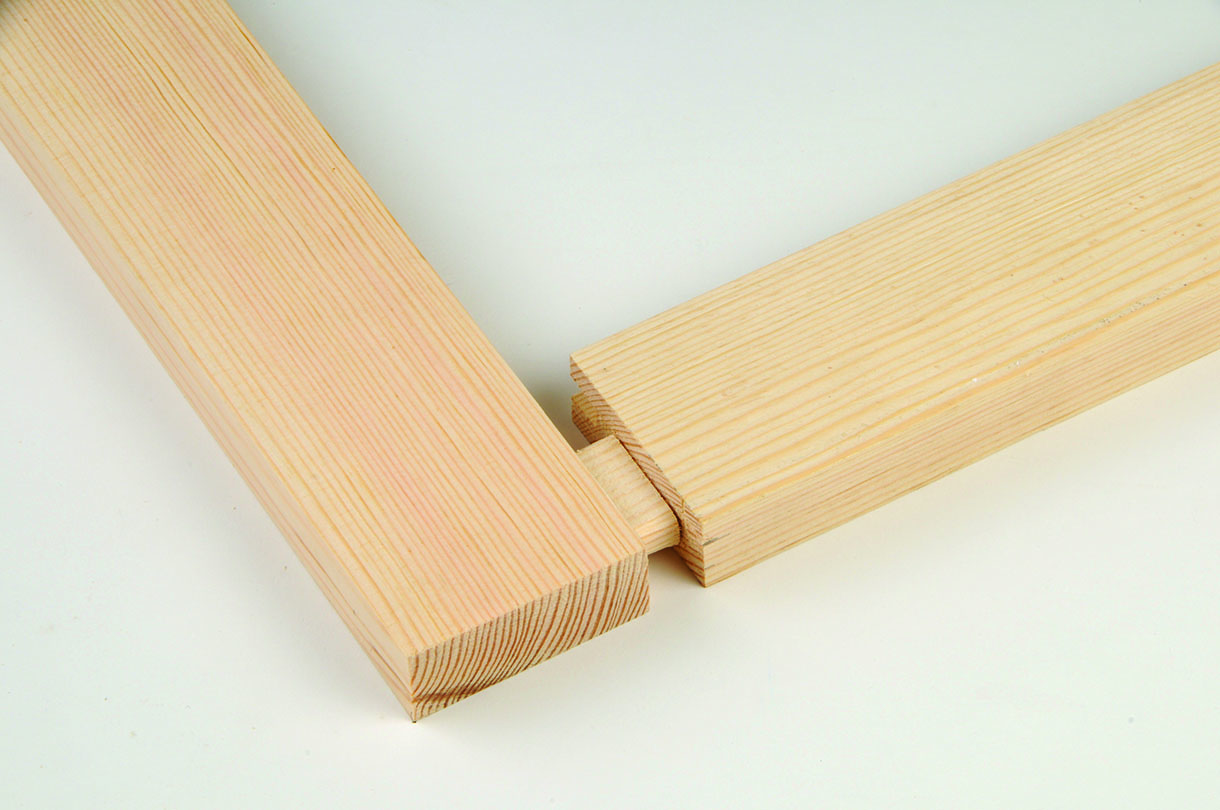 A mortise and tenon joint 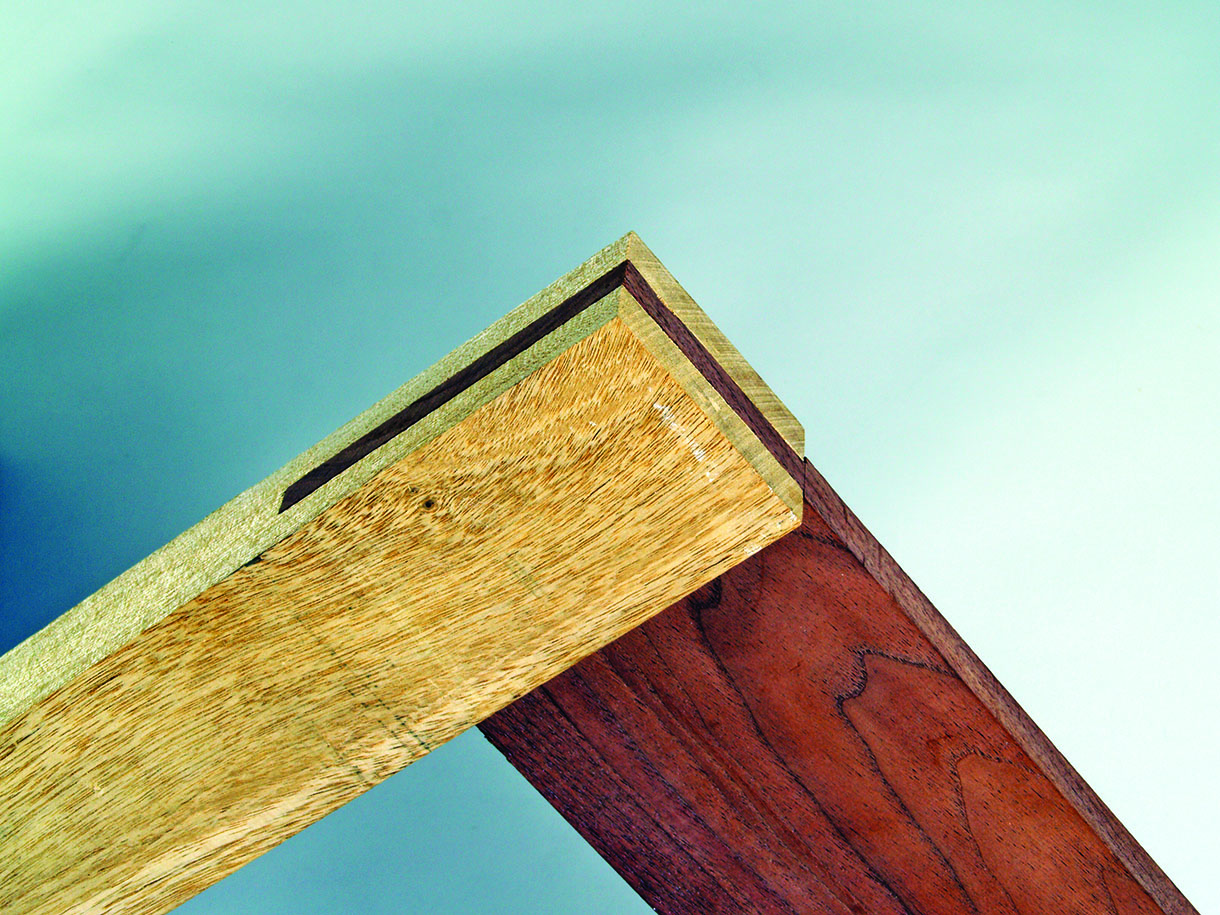 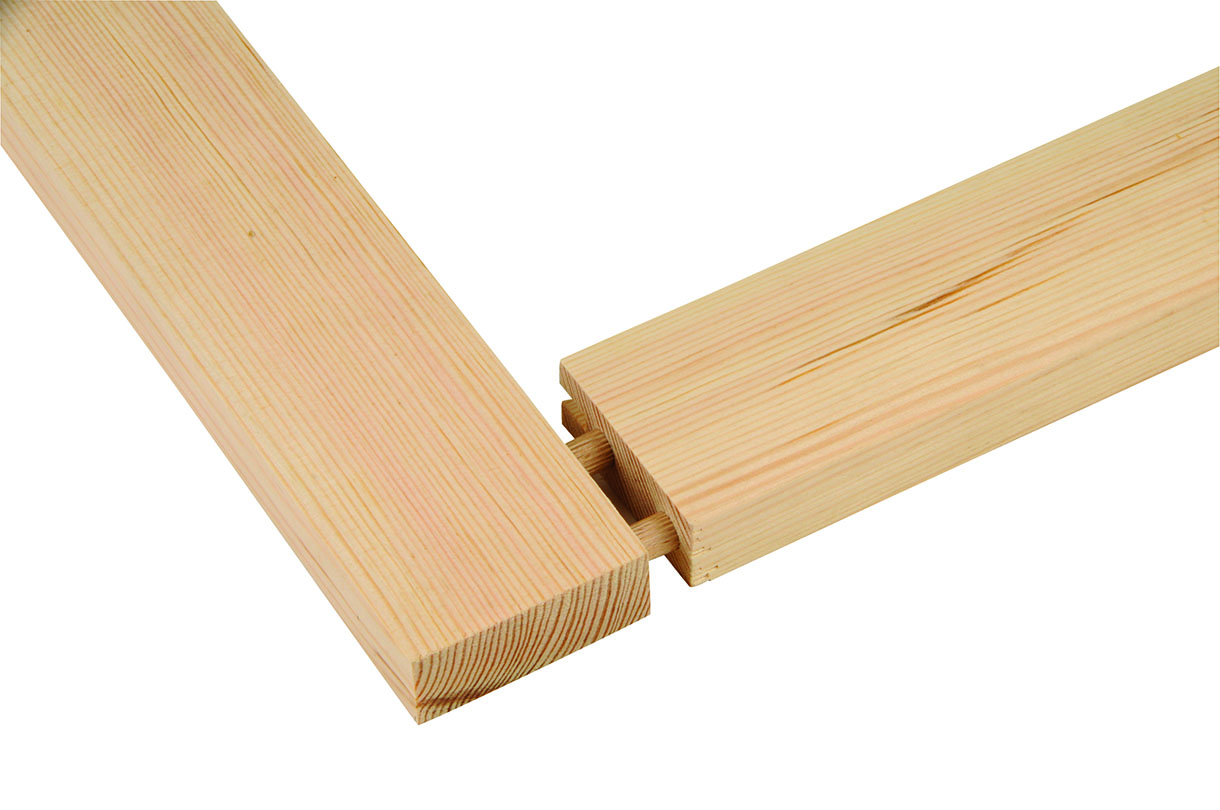 Managing stress
Cylinders and curved surfaces help distribute stress in the joint thus reducing failure hot-spots.
Many of us go to considerable lengths to create crisp sharp edges and corners, even where they will never be seen (I know because I do that). I think that is about the pride in our work. But, depending on your viewpoint stress either hates, or loves, sharp edges and corners. As a gremlin, stress goes looking for these features and exploits them to the full. Failure always has to start somewhere and stress is brilliant at finding just the place. So stress happens to like the same things we do (crisp and sharp), but for different reasons.
A cylinder (or round tenon) is such a great shape because it has no sharp angles (except at the end) and it packs more material into a given surface area.