Dovetail Jigs
There are two main types of dovetail joint: half-blind joints and through joints. Both are formed by interlocking a set of pins with a set of tails; a half blind joint differs in that the cut does not go all of the way through the board and the ends of the dovetail are concealed on one side. 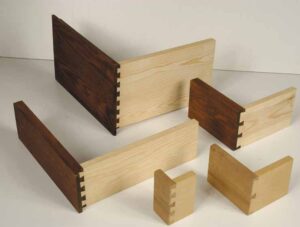 Examples of half-blind dovetails for the fronts of drawers

The ability to hand-cut a dovetail joint has long been considered the measure of a craftsman, but now that modern glues are so efficient, dovetail joints are, despite their inherent strength, mostly decorative details cut using jigs. Until a few years ago, it was possible to spot a jig-cut joint from a mile off. However, developments have raised the level of sophistication of dovetail jigs to the extent that they can now produce an impressive array of complex and decorative joints for the average woodworker. 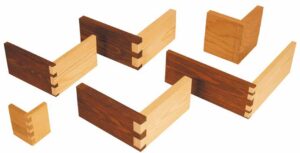 A selection of ‘through’ dovetail joints

All that is needed is a bulging wallet and a methodical mind. There are, however, several basic jigs on the market that can produce straightforward results. These are good enough for most woodworkers’ ambitions and won’t break the bank. Fixed-comb jigs are the most basic set-ups and will only cut one size and pitch of half-blind dovetails. The fixed size of these templates also means that the width of your board is governed by the multiple widths of each tail, and the thickness of the board is also limited. 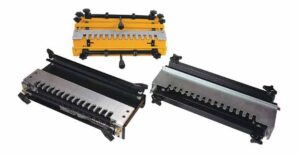 More sophisticated jigs such as the Leigh, WoodRat or Trend DC400 can cut a variety of widths, pitches and board thickness to produce an infinite number of variations. By doing so, they give back the creative control to the woodworker that hand-cut dovetails once offered.