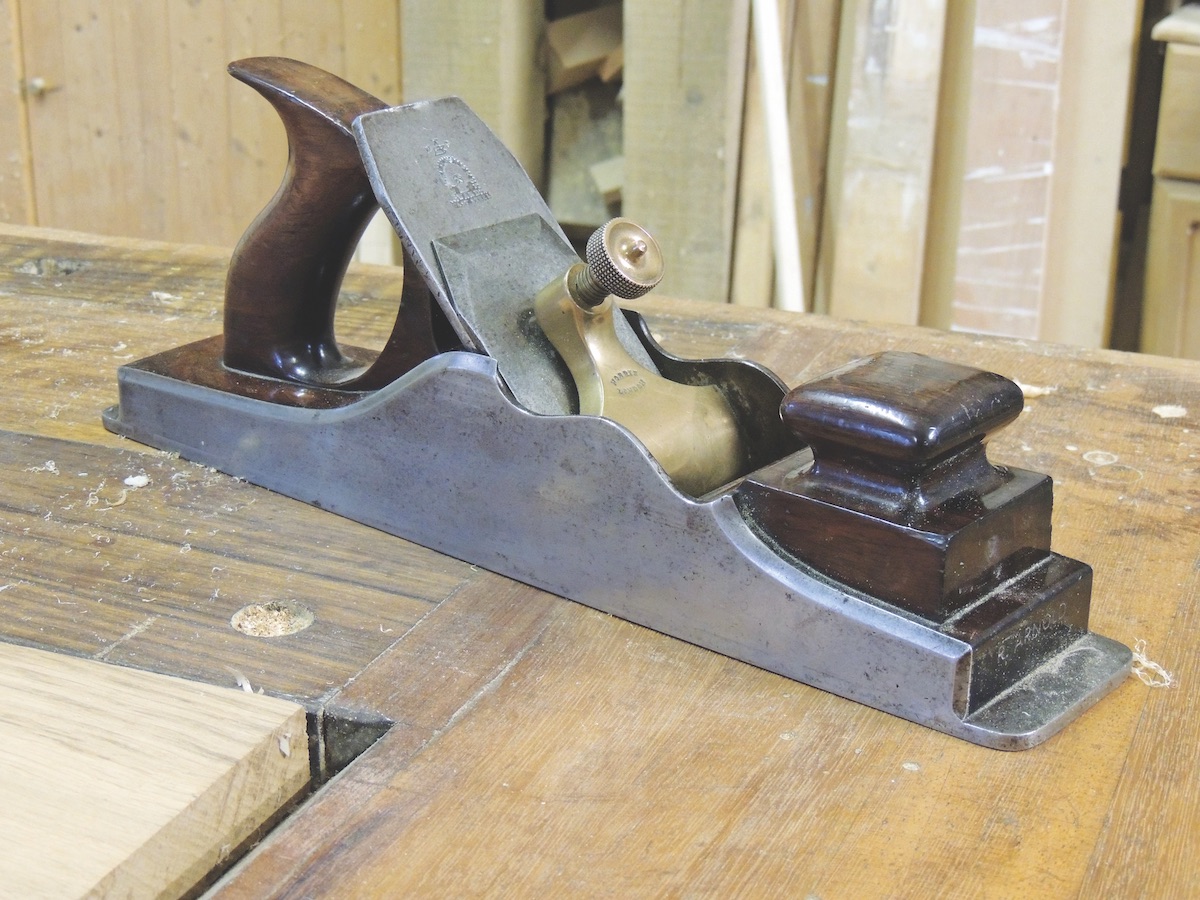 As many of you will already know, I have a passion for older woodworking tools and still use them on a regular basis in my everyday activities as a joiner and cabinetmaker. I think my first love will always be wooden bodied planes, but this is a story of a different form of plane and one in particular that has been a good companion of mine for over 30 years.

The ‘Rolls Royce’ of planes
Towards the end of my apprenticeship as joiner I started to take an interest in all forms of woodworking and proceeded to read up on anything I could lay my hands on related to the subject. I started coming across descriptions of a certain make of plane that seemed to have an almost mythical status among the woodworking fraternity. The planes were called ‘Norris’ and I soon began to hanker after owning what was often described as the ‘Rolls Royce’ of planes. One day, I happened to mention at work I was looking for a Norris plane and one of the old boys said he had one at home, but never used it as he could never get on with it and found it difficult to sharpen. He said he would be happy to sell it to me, but didn’t know what to charge for it. He then suggested I pop to the local ironmongers to find out what a new Stanley smoother cost and set that as the price. This was about £25 at the time, so I paid up and the deal was struck. The plane was a pre-war, number 50 coffin smoother and although I used it for a few years, I never really gelled with the tool and ended up swapping it for another plane later on down the line. I noticed a very similar plane on the web for sale the other day with a price tag of £750… perhaps I should have hung on to it after all!

Norris panel plane
As is the way with all tool enthusiasts, I soon started to dream of my next Norris. This time I set my heart on a panel plane and when my parents asked me if there was anything special I would like for my 21st birthday, I suggested they could help with the cost of a Norris panel plane. At the time, the now famous tool auctioneer David Stanley had a shop in Derby and as this was reasonably near, my mother drove me up to see if they had a suitable panel plane in stock. How I wish I could travel back in time and once again visit that marvellous emporium of delights. It was a veritable Aladdin’s cave of treasures for a young tool enthusiast such as myself. Although I cannot remember his name, the shop was manned by a wonderful old gentleman, who would I feel have been quite at home in a Dickens novel. If memory serves me right, he was a retired joiner of the old school. When I enquired as to whether he had any Norris panel planes for sale, he rather bluntly asked me “What do you want it for boy? Are you a collector, or do you actually want to use it boy?”. I straightaway assured him that I was intending to use it and immediately sensed a softening of his approach to me. The gentleman then went on to inform me that he had about five examples to choose from, but then went on to say that if I was serious about purchasing one of them to actually use, I should try them out. Under normal circumstances, in most tool shops this could have proved difficult, but this was no ordinary tool shop. In the middle of the shop floor stood a traditional joiner’s bench and my new-found friend proceeded to place the selection of planes on the bench for my perusal. He then placed a length of timber in the vice, but before I had the chance to try out any of the planes he said this: “Now you might think I’m strange boy, but what I want to do is blindfold you before you make your selection.” Much to my mother’s amusement, this is exactly what he did. I shall be eternally grateful to that old craftsman for his wise words for as I tried out each plane in turn, it soon became apparent that one plane in particular had a completely different feel to the others. It immediately felt comfortable in my hands and had a balance and action that the other planes simply lacked. Before I even took the blindfold off, I knew that this was the plane for me

Richard Arnold at the bench with his trusted Norris plane 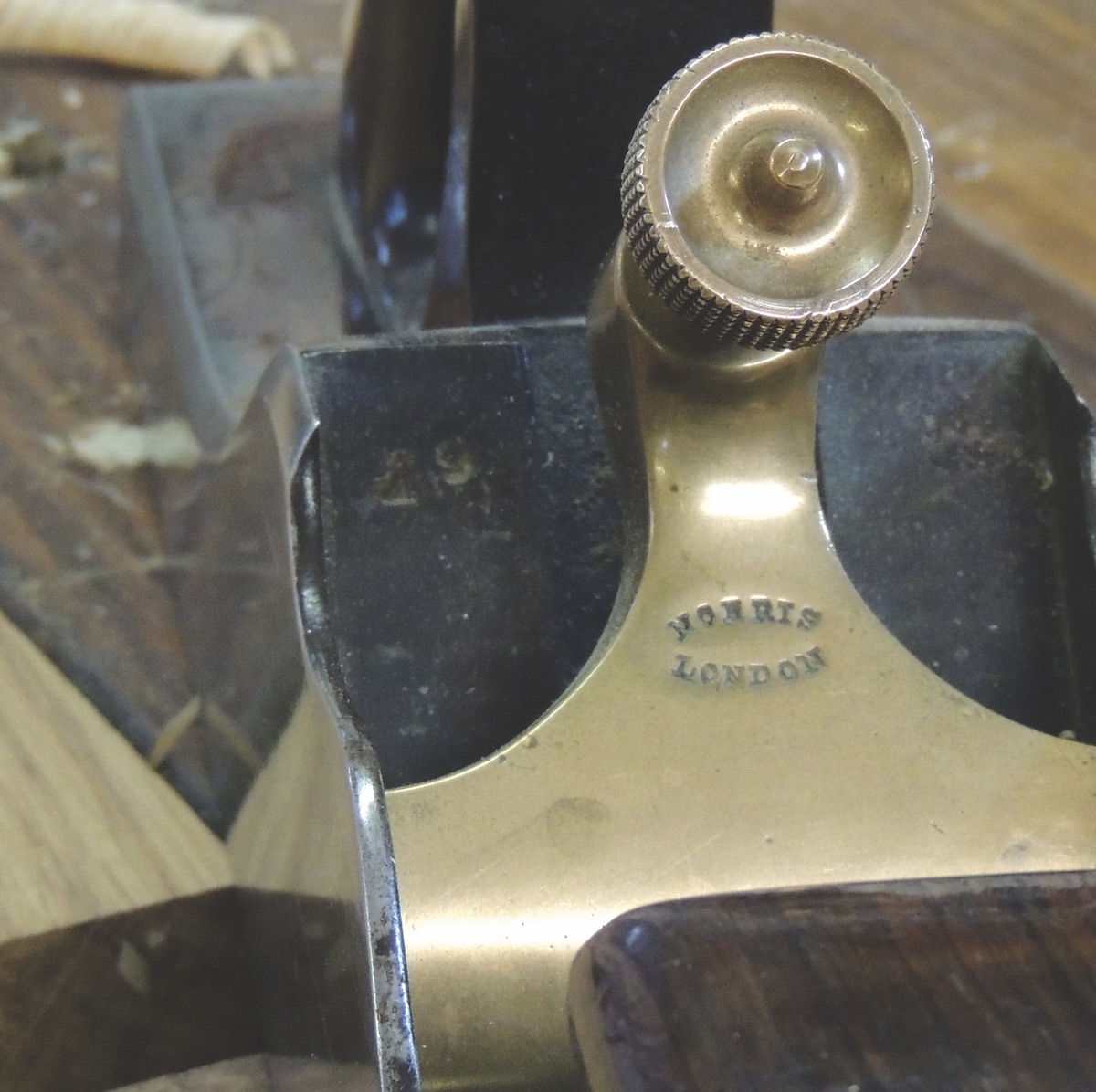 The ‘Saracen’s head’ screw on the lever cap 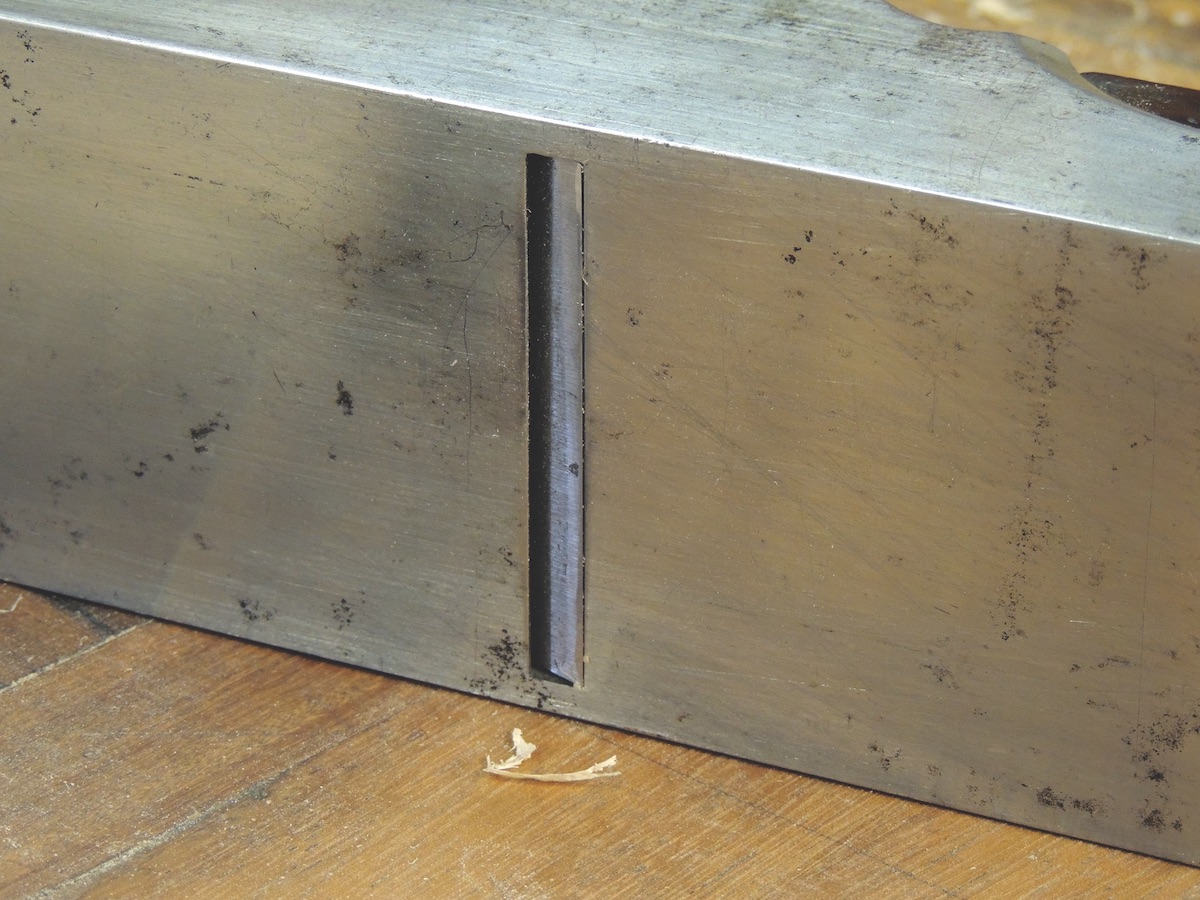 A hundred years on and still a precision instrument 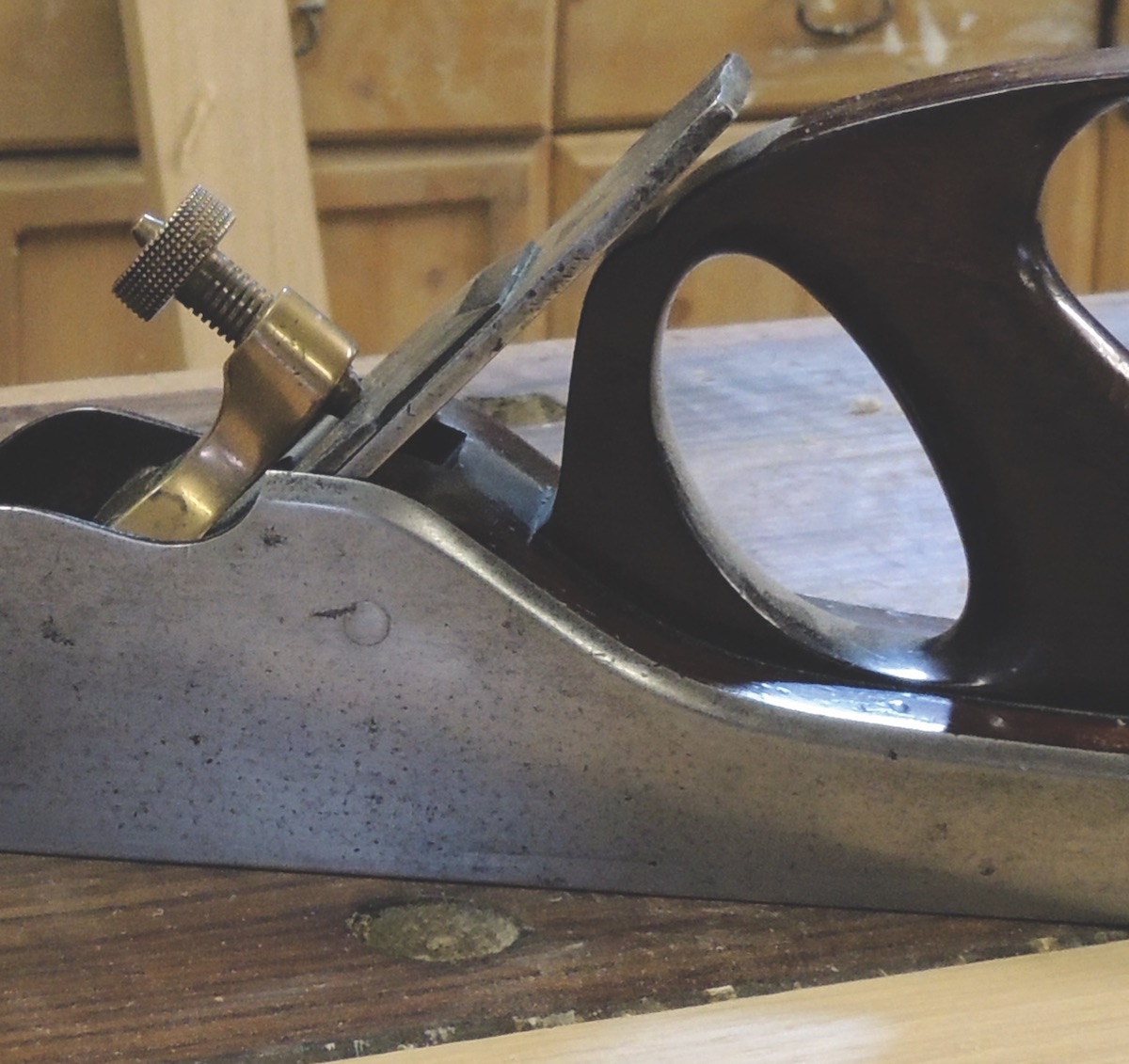 Note the lack of an adjuster

The history
At this point I should mention that Norris planes are well known for the type of adjuster that Thomas Norris first patented in 1913. Most of the bench planes made after this date have this feature and, if truth be known, I had set my heart on buying a panel plane with an adjuster. Of all the planes I tried out the only one that did not have an adjuster was the one I had selected during my ‘blind test’. Although I was initially disappointed by this, I decided to stick with my instinct and purchase the plane. To this day I have never regretted that decision and the plane sits in front of me now as I type these words. A constant companion in my woodworking adventures for the last 31 years. I would now like to discuss the panel plane in question and where it fits into the history of the famous plane maker, Thomas Norris. The origins of the firm known as Norris of London are still a bit of a mystery. The 1922 price list states that the firm was founded in 1860, but the earliest records of actual manufacture date from 1872. It is surprising that, although there have been many articles written about Norris planes, there is still not much information on how to accurately date the earlier examples of his bench planes. In theory this particular plane could have been made anywhere between 1872 and 1913, but my own feeling is that a more accurate estimate would be around 1900. The plane is 394mm long and is made of a dovetailed construction as opposed to a casting. The dovetails are virtually invisible and this is possibly why Norris marked the front edge of their planes with the word ‘steel’ to differentiate them from cheaper cast models. The infill is made of a beautifully figured rosewood and appears to have a French polish type of finish to its surface. The thick and parallel 62mm iron and back iron – bedded at 47.5° – are marked with the maker Ward and Payne. Most of the earliest planes by Norris seem to have irons fitted by this famous Sheffield manufacturer. The late Ken Hawley once told me that he considered Ward and Payne to be possibly the best edge tool manufacturer to have ever worked in Sheffield, so it would appear that Mr Norris had good taste!

Norris’s finest tool
With some infill planes there is a way to tell if the iron is original to the plane. The bed of the plane, the iron and cap iron, and in this case the bronze lever cap are marked with a batch number. This is often a single number, but sometimes it is a combination of number and letter. On this particular plane the mark is 6P. I originally thought this may stand for panel, but I have since seen a Norris smoother marked with a ‘p’ so I have had to discount this theory. The bronze lever cap is the early form with what has been called a ‘Saracen’s head’ screw. I find this a far more aesthetically pleasing design than the ‘clumpy’ later pattern seen on the adjustable planes. In today’s market all Norris bench planes are fetching good prices, but it is interesting to note that it is always the adjustable examples that fetch the most money, but in my own opinion the planes made before 1913 were probably Thomas Norris’s finest work, and as a consequence still a viable option for someone looking for a quality infill to use at the bench.