How to make Dowelled Joints

SUCCESSFUL DOWEL JOINTING RELIES ON ACCURATE MARKING UP
When furniture ceased to be handmade and mass production took over in the first half of the 19th century, manufacturers worked out that it was easier to drill a matching pair of mating holes, glue a dowel into one hole and then glue that component to another component which also had a pre-drilled dowel hole in it. Provided that the holes could be drilled accurately, the entire process was faster than using a mortice & tenon. The ability to drill accurate dowel holes repeatedly in components was a major factor in the explosion of cheaply produced furniture in the 19th and 20th centuries. However, non-mass produced dowel joints had been made for hundreds of years before that. In recent times the inserted-plug type of jointing method has been expanded into a whole variety of jointing systems, some of which I referred to last month. Bearing in mind that a dowel joint is just a butt joint with locating and fixing pins, its success depends upon the accurate use of a marking system. In this article I will show how some of these systems are used. 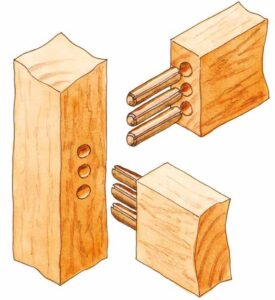 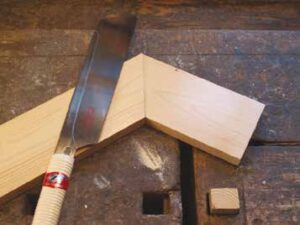 For a long-grain joint cut the components with plain crosscuts at right angles to the main axis of the component or alternatively bisect the angle formed by the two components as I have done here. Dowels are very useful for components that join at odd angles because the face of the butt joint can be used for registration. Boards can also be jointed along their length to make up into wider widths for tops and sides, although nowadays a biscuit jointer would probably be used for this application 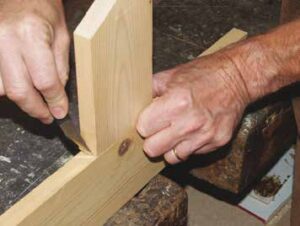 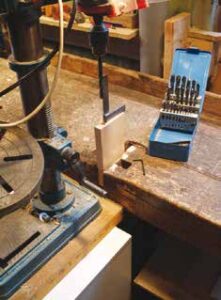 Set up the minor piece in a drill press and drill a hole suitable for the dowel that you are using. In most cases three dowels are used in order to add strength and prevent twisting of the joined components. Choose the longest and fattest dowel that you are able to, but bear in mind that the timber surrounding the hole should be thicker than the diameter of the hole itself. You also need to leave a decent amount of timber at the bottom of a transverse hole to prevent the dowel breaking through on the far side. Here my drill press is on a low stand. This allows me to secure the component in the bench vice. This is, however, cumbersome; the drill press is heavy and potentially unsafe to move so a much easier method using jigs is shown, right. The drill press head has to be swung through 180° for this system to work. On my drill it does not overbalance but other drills may need weights or cramps 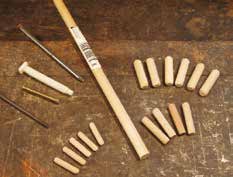 For dowels you can use pre-shaped rod, commercially manufactured ribbed compressed beech dowels, or you can make your own using a dowel plate. For specials and one-offs you could turn them on a lathe and you can also use metal or fibreglass rods. In the main picture I am making a nonstandard-size dowel in a workshop-made dowel plate. The plate is simply a piece of scrap mild steel that has been drilled with a variety of holes in both metric and imperial sizes. The large dowels were obtained from Protak via the Joint-Genie company 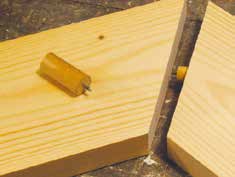 When you have the hole in one component you need to mark the position of the corresponding hole in the other component. For this use dowelcentres, a jig or dead-reckoning. Dowel-centres slip into the first hole; bringing the components together causes a little mark to be made in the second component. There is a close up of a dowel centre on top of the left-hand board 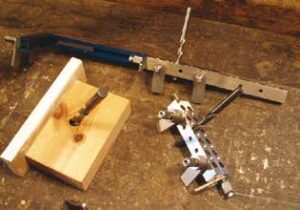 Either make a jig like the one on the left which was designed for angle drilling or use a proprietary one such as the Joint- Genie (www.joint-genie.co.uk), of which two sizes are shown here. You could also use a router in one of the standard joint-cutting tools and plunge to bore the hole although that would be awkward on some setups 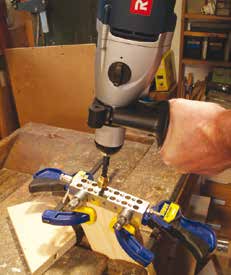 The Joint-Genie in use. The tabs are cramped against the face edge. To make the mating hole the tabs are simply swung through 180° and registered against the datum face on the second piece and then cramped in place. Simple! 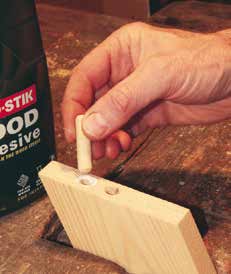 Make sure that your dowels have a 2mm clearance at the bottom of the second hole. This is to make certain that they do not ‘bottom’ and prevent the joint from closing up. Plain dowels also need to have a slot cut in them to allow surplus glue to escape. Put the glue in the hole, not on the dowel. If you put it on the dowel the action of locating the dowel into a tight hole will scrape all the glue off. The dowel will also swell up and won’t fit the hole anyway 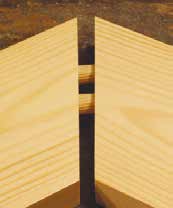 The joint being closed up 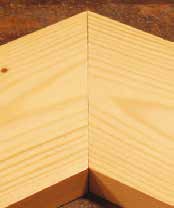 What might appear as a difficult shape is easily made with dowelled joints. This one is ready for final cramping 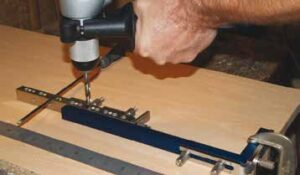 This photo shows the large Joint-Genie being used with an extension bracket to cut a series of dowels in a wide board of the type that might be used for a carcass. To prevent movement at the end of the bracket a screw has been driven through the arm into the substrate. The screw hole will be hidden by the board that is to be fixed

VERDICT
Pros
Easy to make and assemble
Easy to prise apart, drill out and repair
Cons
Joints in chairs tend to work loose over time
In chairs shear failures in dowels are common
Dowelled joints verdict
Given the choice I would always prefer to use a tenon joint but as a restorer I know that it is easier to repair a dowel joint that has become loose than a mortice & tenon joint that has become loose. So you could argue that dowelled chairs are likely to last longer because they are cheaper to maintain although in pure cabinetmaking terms mass produced dowels are a less elegant solution. 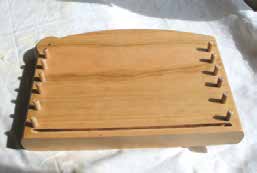 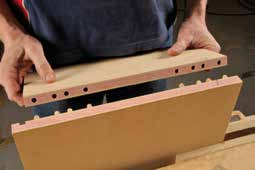