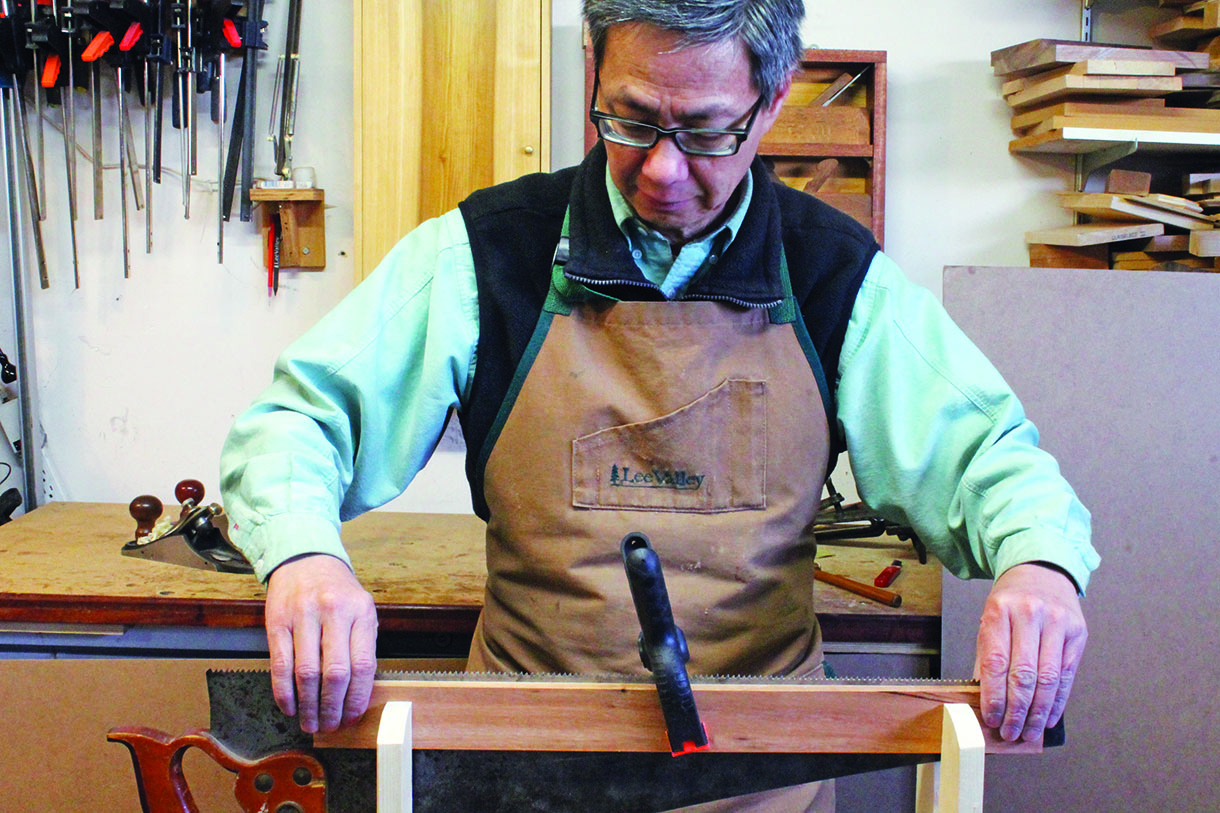 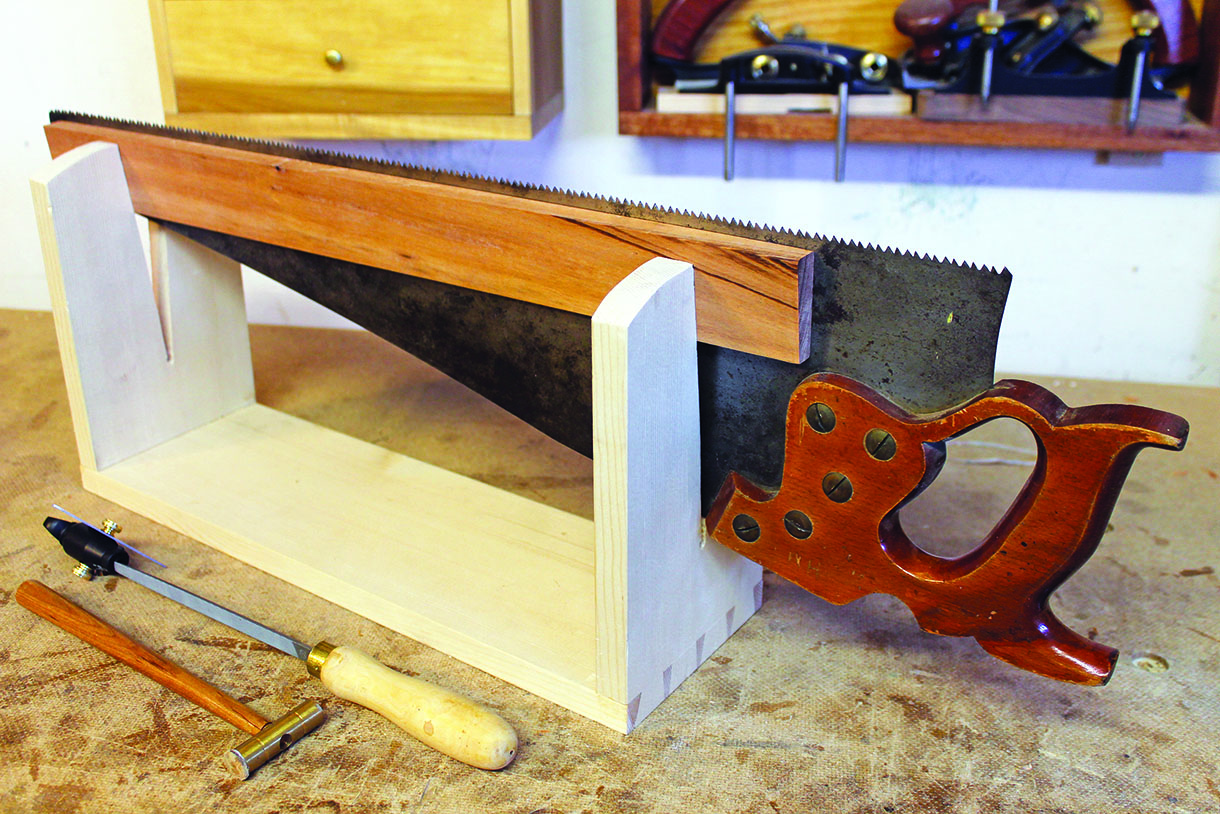 Shop-made saw vices come in all kinds of designs and sizes from the giant swinging saw vice featured in one of Roy Underhill’s Woodwright’s Shop episodes to the hinged saw carriage used by Thomas Lie-Nielsen to Paul Sellers’ down-to-earth saw chop, which is simply a batten with a centre kerf ripped down from one end.
With the exception of the swinging vice, which has its own cramping element, most shop-built saw vices have one limitation: they need to be used with a bench vice or the like. If your handsaw hits a hidden metal object on a job site, none of these shop-built saw jigs alone by themselves can allow you to make fixes.
I came across a home-brew saw vice that was somewhat coarsely put together using a nailed butt joint, but its design was clever and it was easy to make out of scraps. It had two V-notched uprights mounted on a base, with two wedge battens used to lock the saw blade into the notches (see the drawing opposite for suggested measurements).
A generous friend, Robert Lee, has gifted me a metal saw vice and a couple of panel saws. The metal vice is good for dovetail and tenon saws, but too short for long handsaws. I decided to make a V-notched vice, but
with one modification to the original design:
I settled for a dovetail joint over nails. The stronger joint makes the jig sturdy and keeps vibration to a minimum. Less vibration means quicker sharpening and longer file life. I had some scrap pine and lots of leftover tigerwood (Goncalo alves) to use for this build. 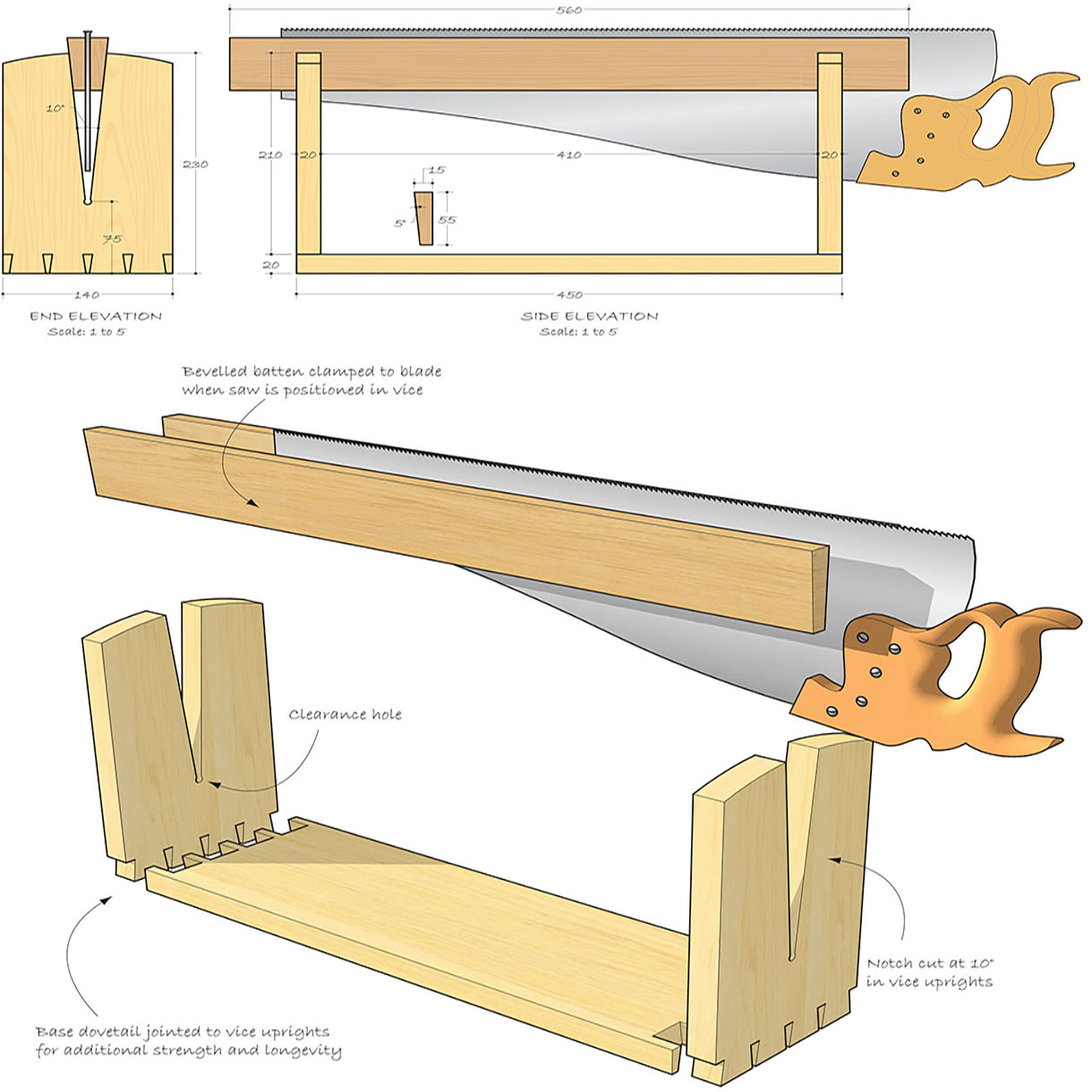 Gang cutting – with inside faces facing outwards
Tailboards can be cut individually or ganged up together. Derek Jones has offered a good analysis on the gang cutting technique recently (F&C 238). Here, let me share the way I gang cut, which is a little different from the common way particularly with how my tailboards are marked and placed.
After labelling the inside faces of the tail (upright) and pin (base) boards, I scribed the baselines. To layout tails, I always use the Alan Peters method – with a set of dividers – to set the tail spacing, and a dovetail saddle marker to mark the sloping lines. But, in contrast to the usual tail marking, for gang cutting, I mark the sloping lines on the inside (not outside) face of one of the boards.
Why mark the tails on the inside face? Because in gang cutting, I cramp tailboards with their inside faces facing outwards. With boards cramped in this manner, I can avoid sawing tear-out on the show faces of the boards. 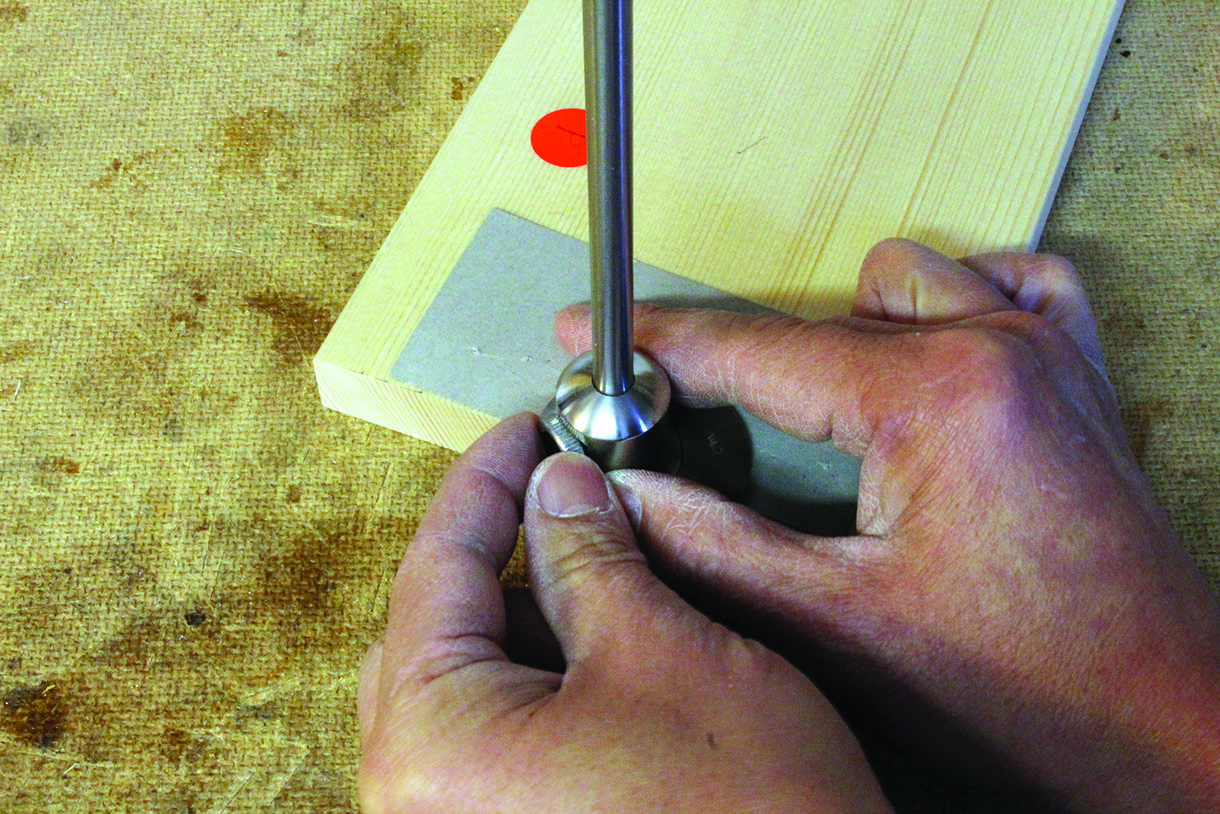 I used a paper shim to set the marking gauge just shy of the board’s thickness. The orange dot shows the inside face 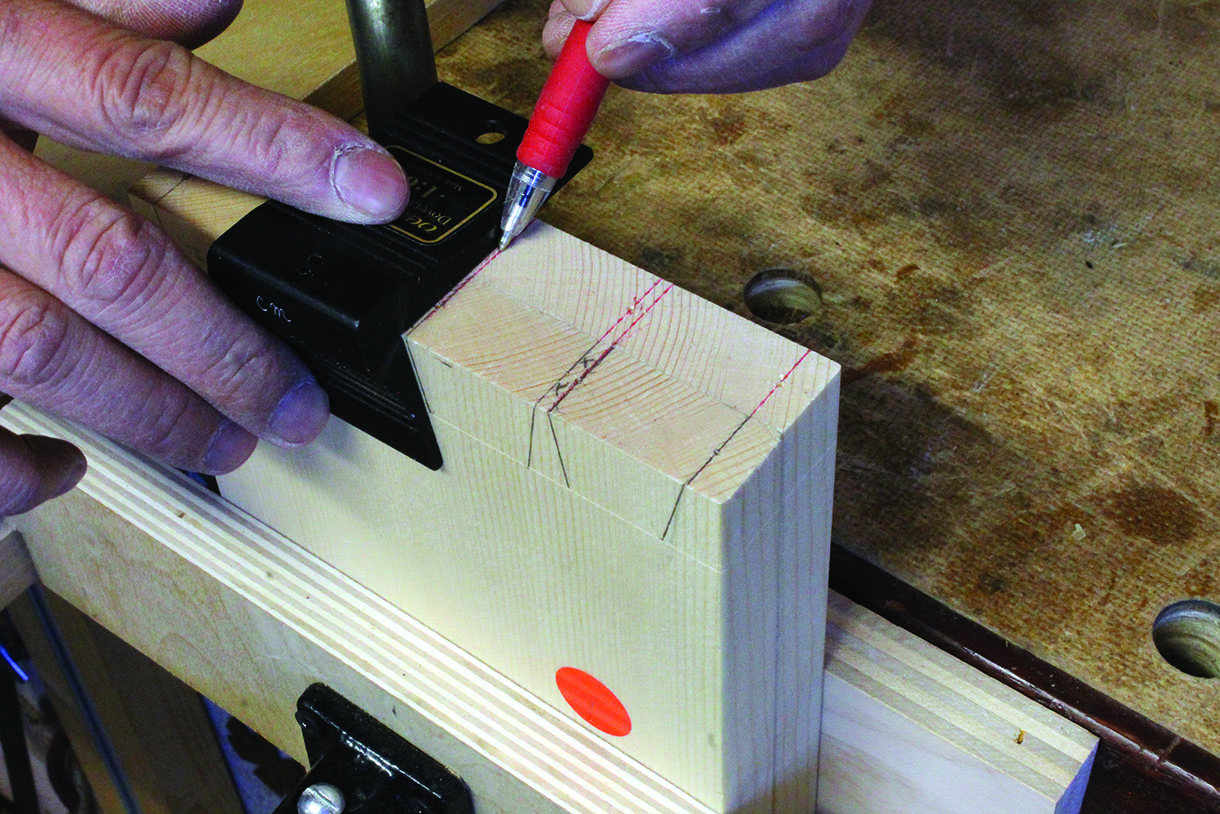 To prevent sawing below the baseline on the back side, I placed a mirror at the back and made passing glances as I sawed down the slopes. As another time-saver in gang cutting, I removed the bulk waste on both boards at the same time with a fretsaw before chiselling out the rest to the lines. 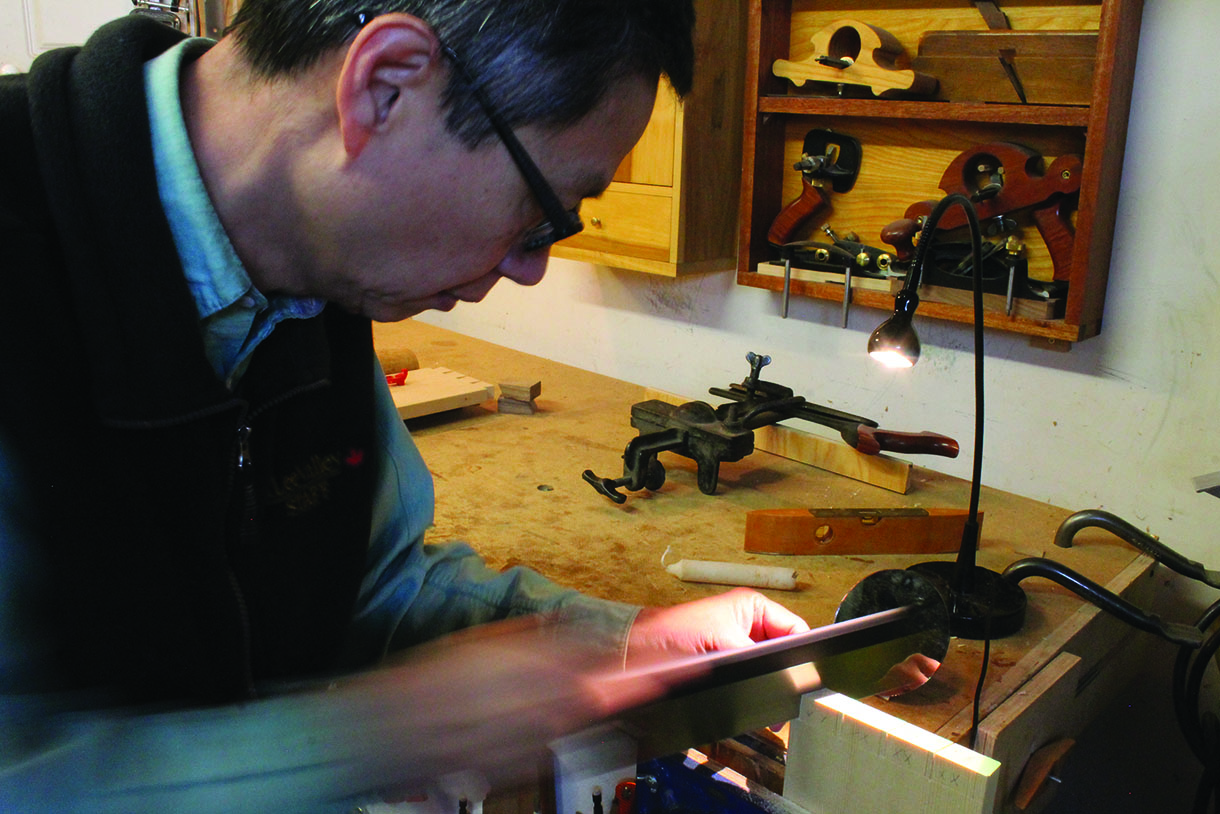 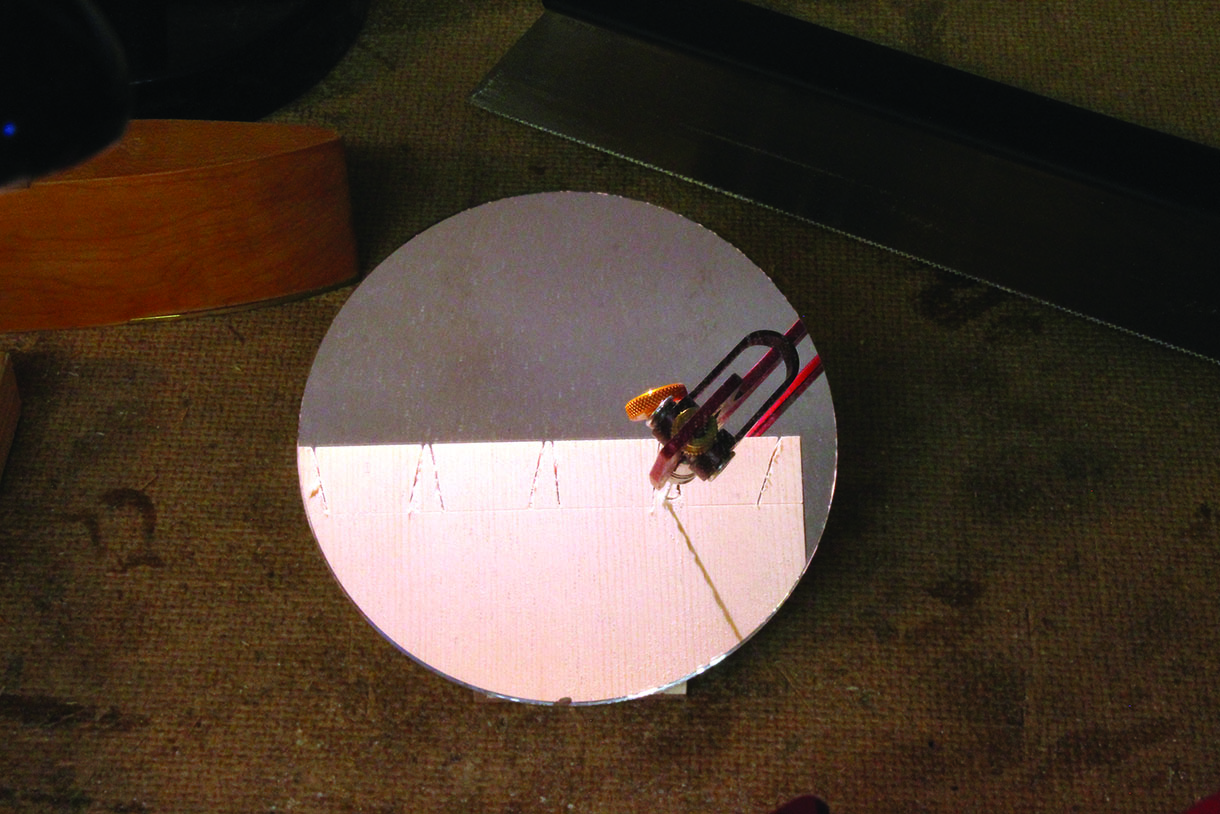 If gang cutting hardwood, use a coping saw instead of a fretsaw for quicker results

Marking the pins with the tape trick
To mark a pin board, I use a marking knife rather than a pencil for precision. To knife the layout lines, I turned to another dovetail trick, this time for accuracy over speed, gleaned from others such as Australian woodworker Derek Cohen and American author Michael Pekovich.
First, put a strip of coloured masking tape on the end grain and then transfer the lines from the tailboard onto it with a knife. Peel away the waste and the tape gives precision incised lines for sawing. After cutting all the tail sockets, I ran a dry fitting before removing the tape. 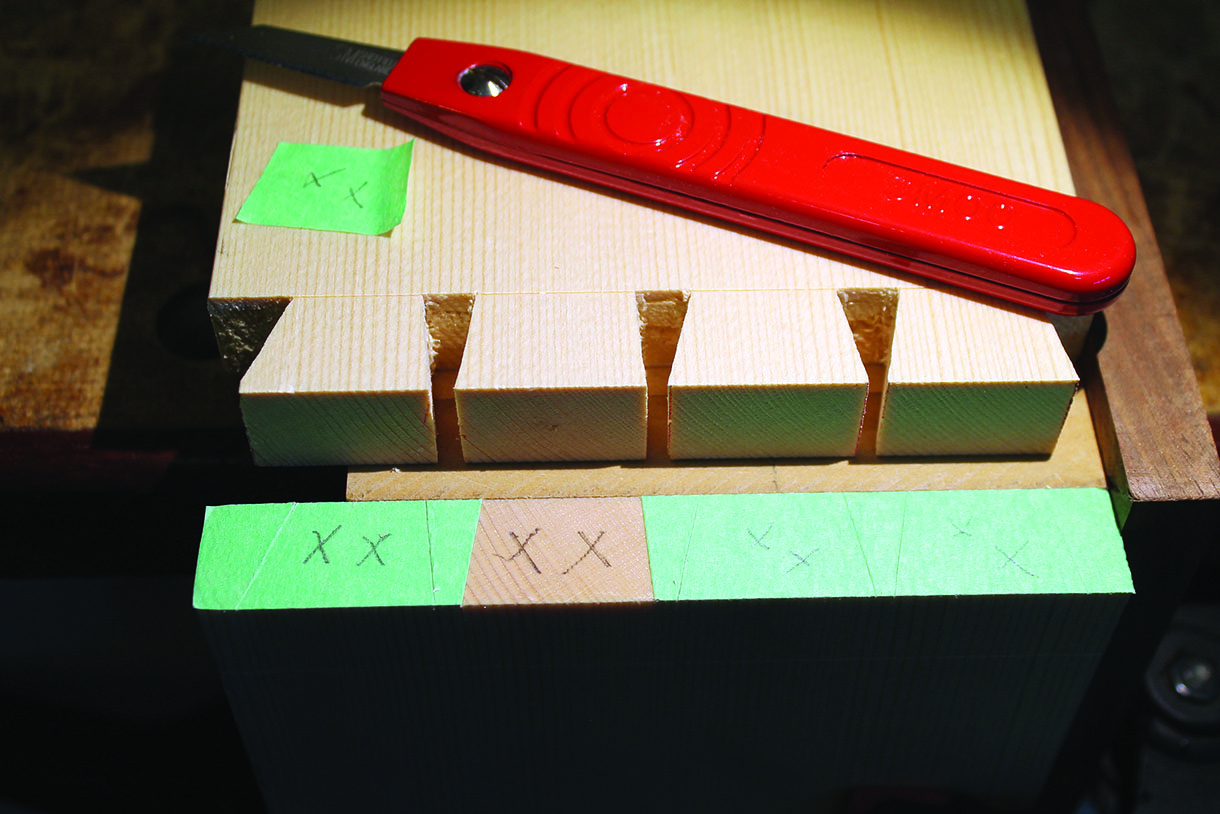 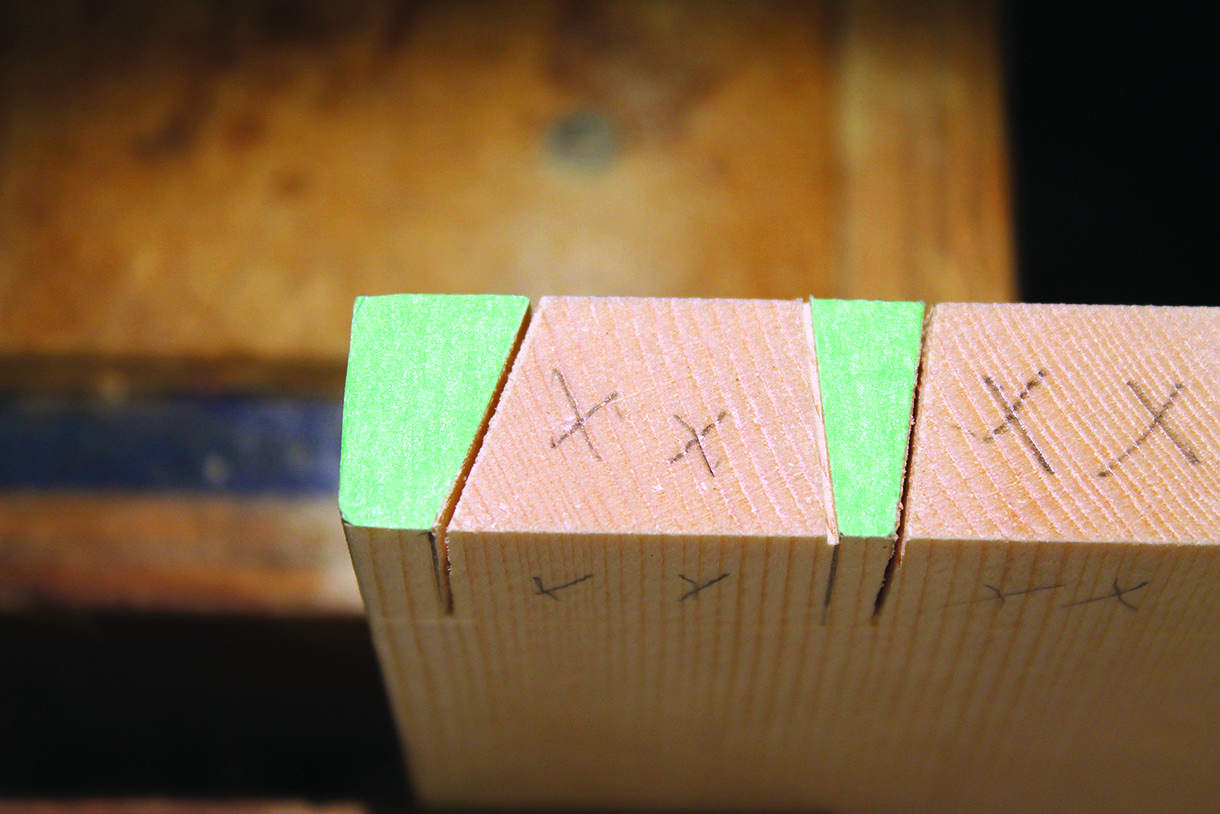 ‘Splitting the line’ can be quite hard. Cutting against the tape edge is much easier

Cutting V-notches on the uprights
To cut the identical V-notches in the uprights, I first marked out the 10° notch and its clearance hole on one of the uprights and cramped the two uprights together. I bored a clearance hole through the boards to prevent splitting and then gang cut out the notches. Lastly, I knocked the corners off to a gentle curve. 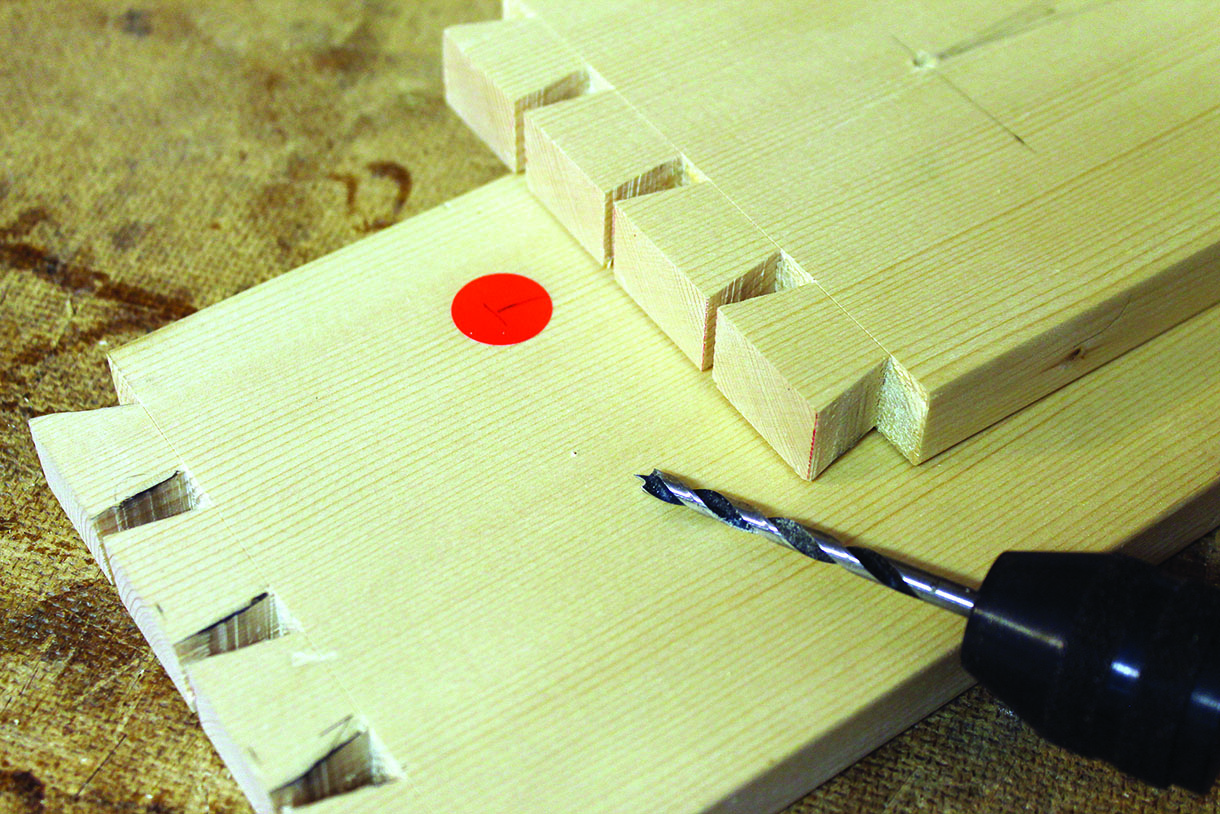 I stopped when the bit just broke through the board with its tip. I then bored the hole from the other side to avoid breakout 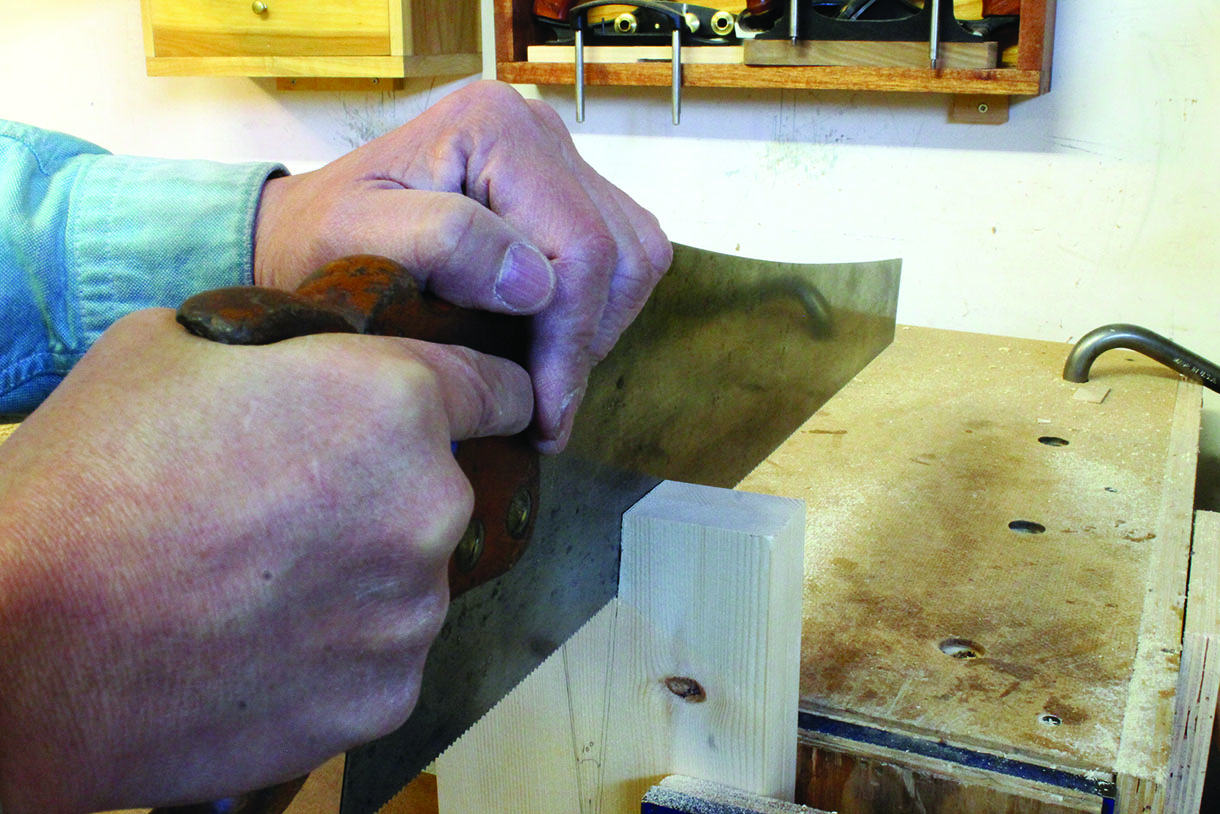 Making the bevelled battens
Use hardwood for the battens; my choice was tigerwood, which is close to purpleheart (Peltogyne spp.) in hardness. When put together, the angle of the bevelled battens should match the angle of the V-notch. You can use a protractor to layout the angle for bevelling, but there is an easy way to mark the planing angle: raise and stand the V-notch against the battens and pencil the sloping lines on the ends.
I honed the plane blade sharp and began my workout, planing down the battens to the line. It was winter here and the workout warmed me up in my not quite heated shop! 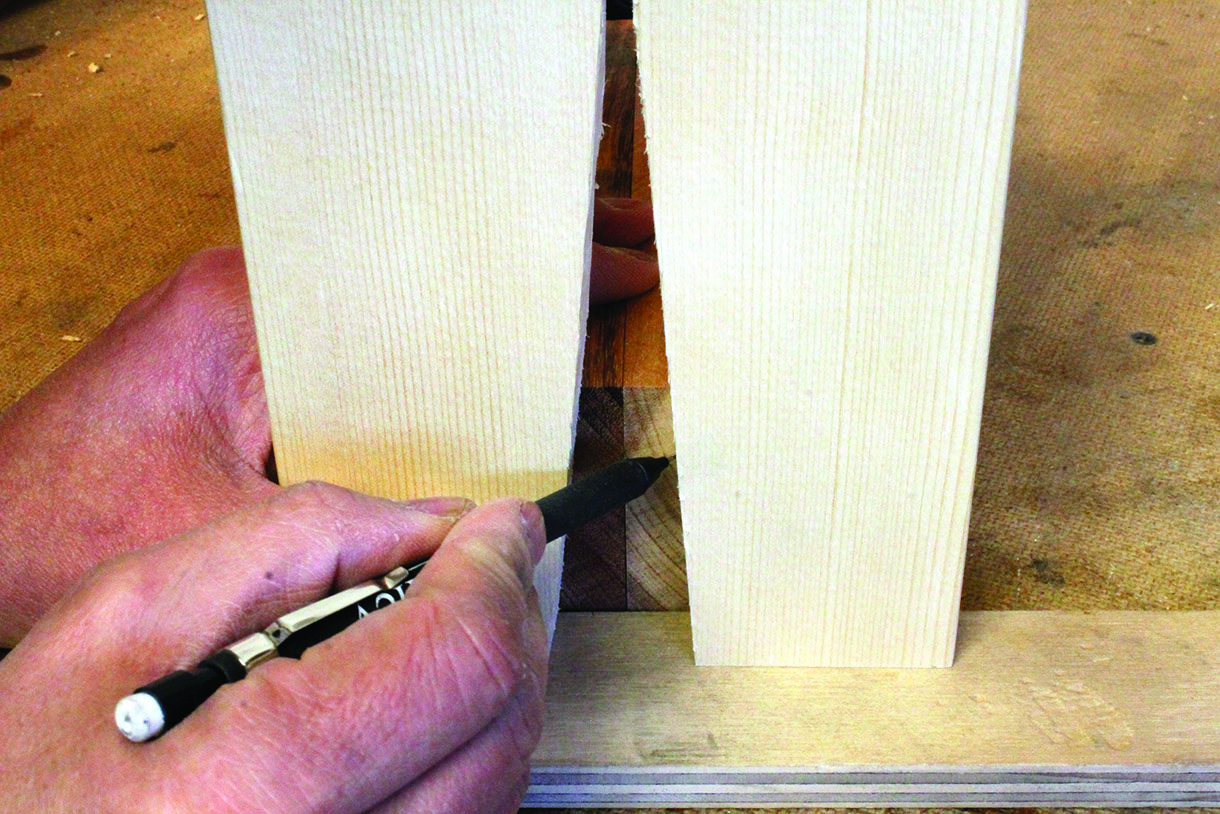 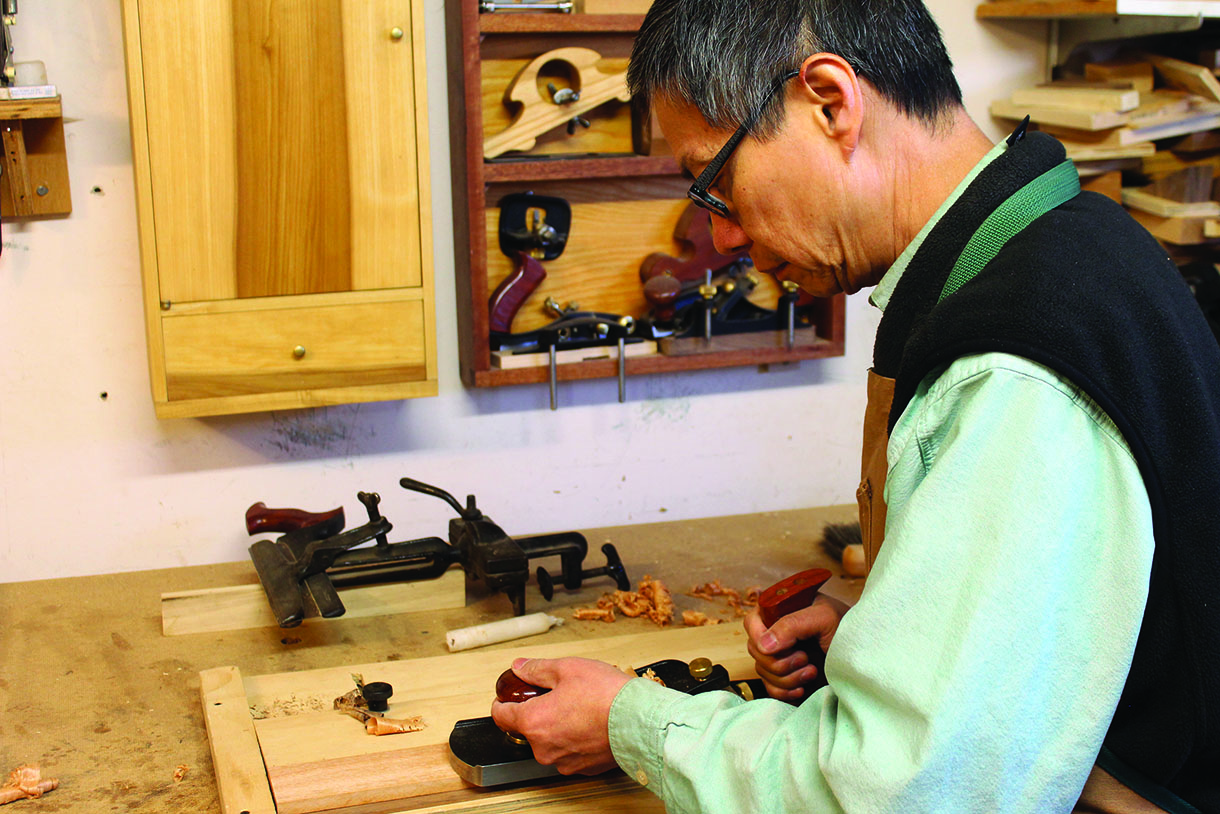 Putting it all together
The glue-up was straightforward as the tails were proud of the pins and I could cramp the dovetail joints without using any cauls. After the glue cured, I planed everything flush. I usually don’t put any finish on my shop jigs, but if you prefer, you can coat all surfaces with an oil finish such as boiled linseed oil.
To use the vice, cramp it down to a bench top and lock the blade with the battens into the notches. To sharpen on the opposite side, simply turn the whole jig around and re-cramp. To release the wedge battens, give a tap or two from below.
All set! Time to give your well used saws some teeth. 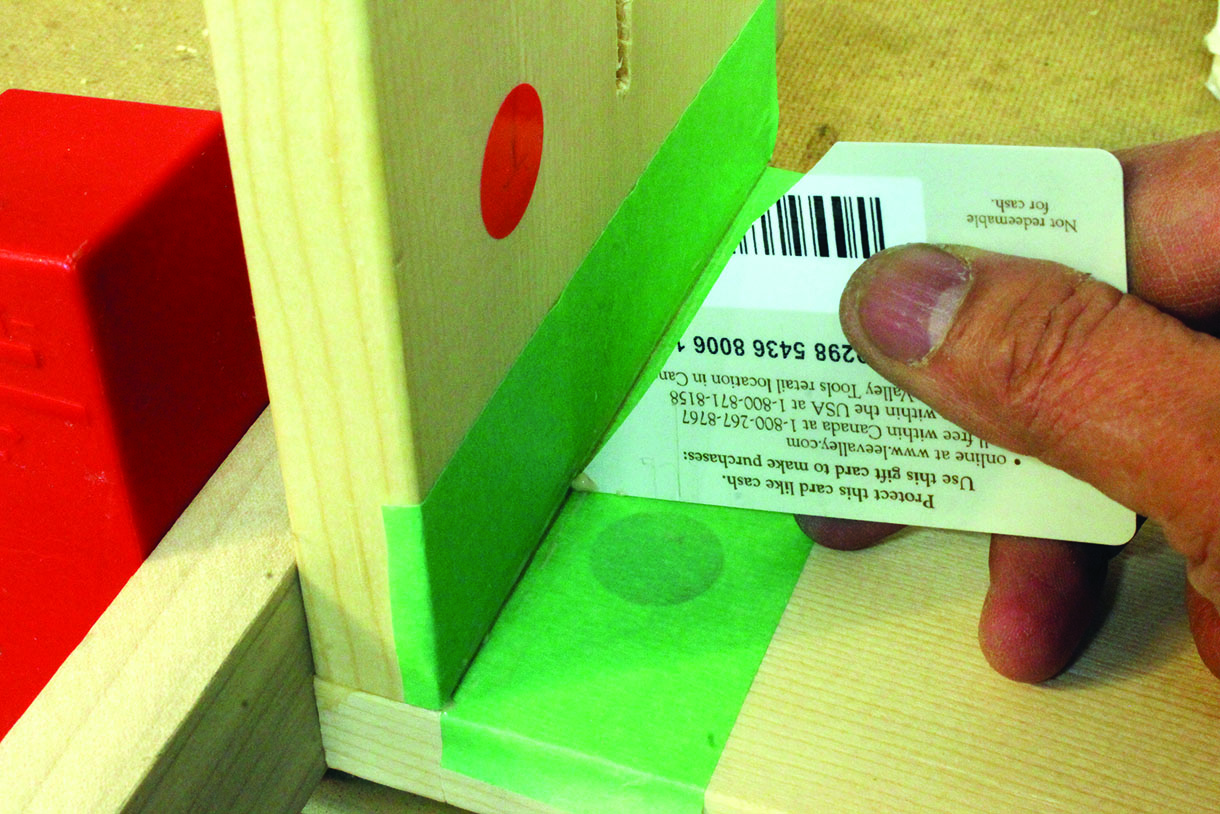