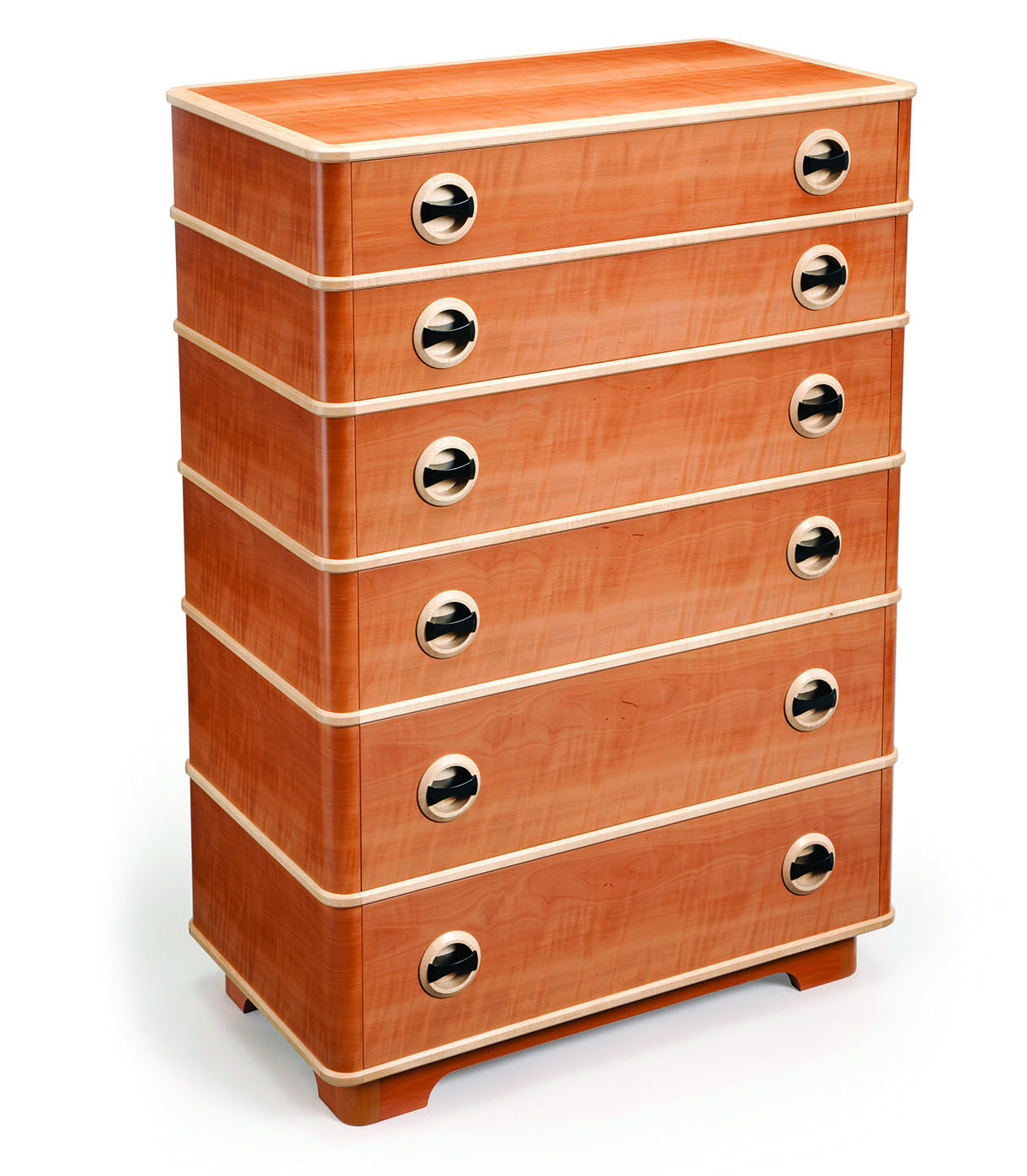 There comes a time for all fine furniture designer-makers when it is necessary to create some new speculative work to show, and then is the time to review one’s sources of inspiration. I have been a long time admirer of the architect Frank Lloyd Wright since visiting some of his creations in Oak Park, Illinois. However, one of his most outstanding designs was that of the Johnson Wax Corporation headquarters in Racine, Washington. I particularly admire the design for its streamlined look, its layered construction and its smooth curved contours. It was certainly not my intention to create a literal representation of the original architectural design but to somehow use the essence of the aesthetics of the design to produce a piece of elegant and modern furniture with that same smooth streamlined appearance. The layered design of the building lends itself to the creation of a chest with drawers layered one upon another with generously rounded corners giving that smooth tactile look.
With this inspiration in mind I proceeded to design the chest as a stack of drawer frames and side panels, with the drawer frames being exposed around all four sides. The materials I selected were steamed pear (Pyrus communis) and maple (Acer saccharum) partly because they reflected the original Cherokee red bricks and cream mortar of the original building and partly because they are both close-grained timbers that produce a smooth polished finish to complement the smooth rounded design. 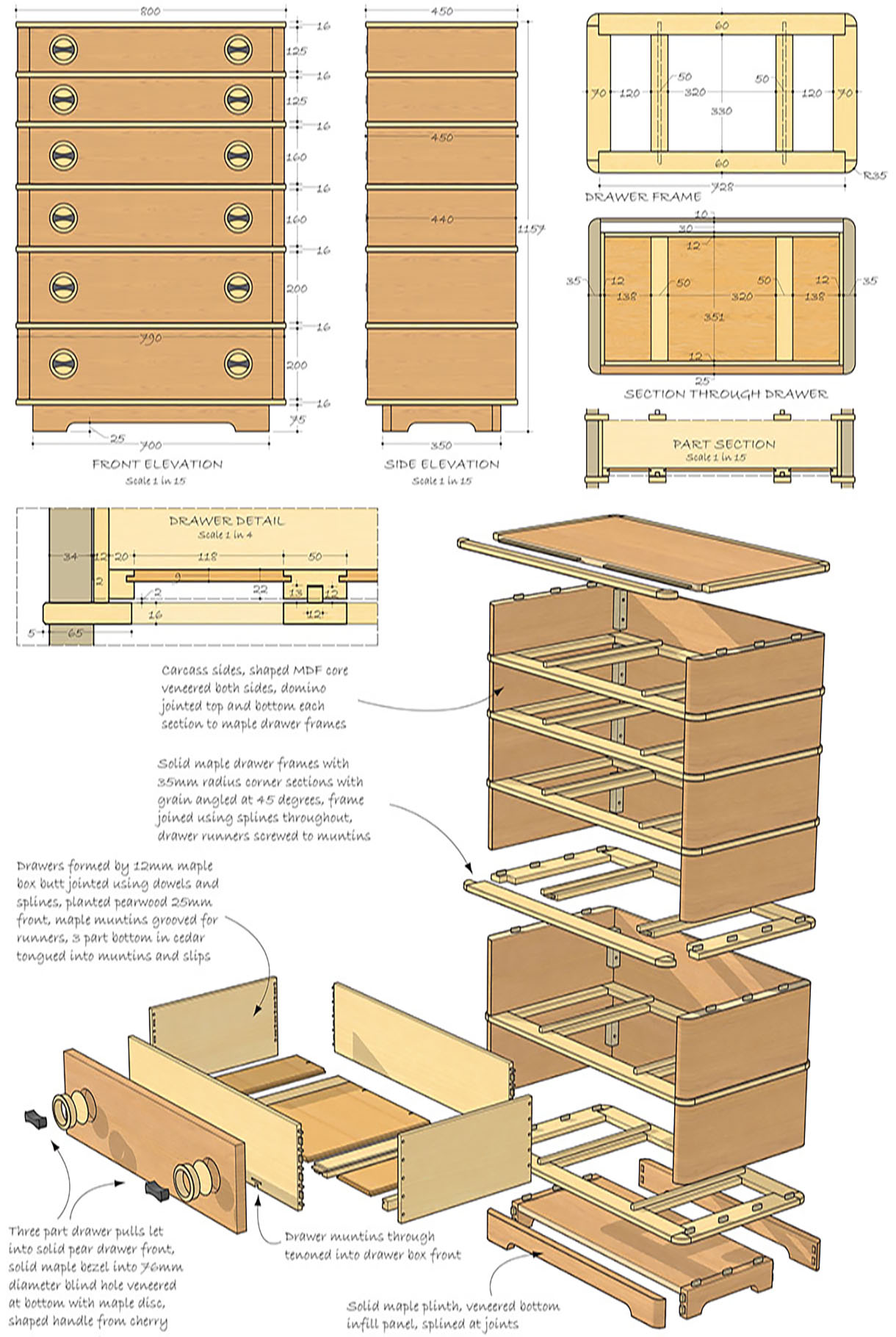 Veneering the side panels
The chest is constructed from a set of vertically stacked solid maple frames with steamed pear side and back panels as shown in the illustrations of the carcass and the chest dimensions.
The first dilemma is whether to make the side panels from solid material or veneered panels. Using solid material would make the shaping much easier but there are the drawbacks of movement across the grain due to fluctuations in humidity which may cause the drawers to jam, also the question of finding enough clean and interesting solid steamed pear to make the whole piece. In addition, where the solid pieces are rounded over, the end grain is exposed and would look much darker after finishing than the side grain, rather hindering the flow of the grain around the chest. The veneering approach is more challenging but the resulting construction is much more stable, plus there is considerably more choice in attractive veneer grains. In addition the veneer leaves can be wrapped horizontally around ensuring grain continuity from side panel to drawer front to side panel.
To successfully veneer the curved sections of the side panels it is necessary to get even pressure perpendicular to the surface along the whole of the profile and across the entire width. The first temptation is to use the vacuum press but the bag will grab the flat part of the profile first and as the bag is evacuated it will try to push the ends of the veneer leaves upwards, thus creating a crease across the curved profile. The best way to achieve a good result is to use an aeroply caul, which is stretched around the profile and therefore a cramping jig is required such as the one shown in the illustration below. The MDF side panel is placed on top of the jig, the show veneer is positioned over the side panel with the adhesive applied to the panel, followed by a layer of polythene, a layer of 3mm flexible rubber to take up any unevenness in the lamination, followed by the aeroply caul. I have glued and screwed 50 x 30mm hardwood battens to the ends of the aeroply caul for cramping. The show veneer layer is at least 30mm overlength at each end.
Once the layers are completed the top caul is positioned and cramped in place on the flat area, then the aeroply caul is drawn around underneath and cramped in position as shown in the illustration below. Beads of adhesive should be observed oozing out evenly along the veneer joint. 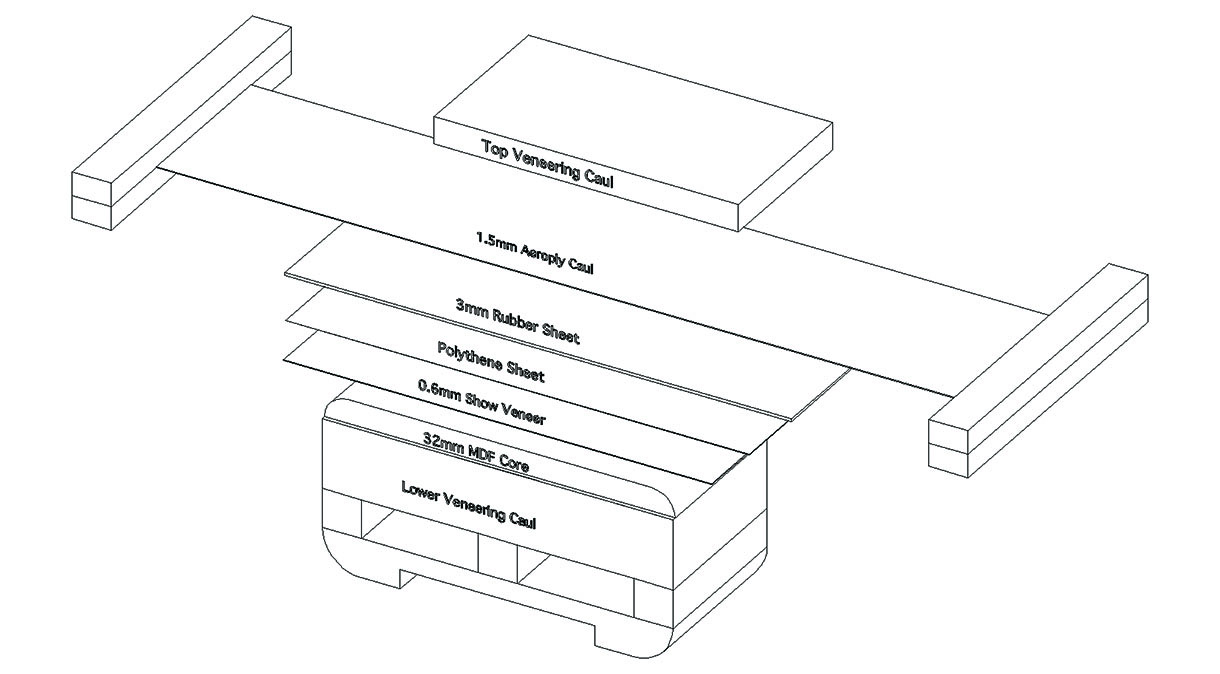 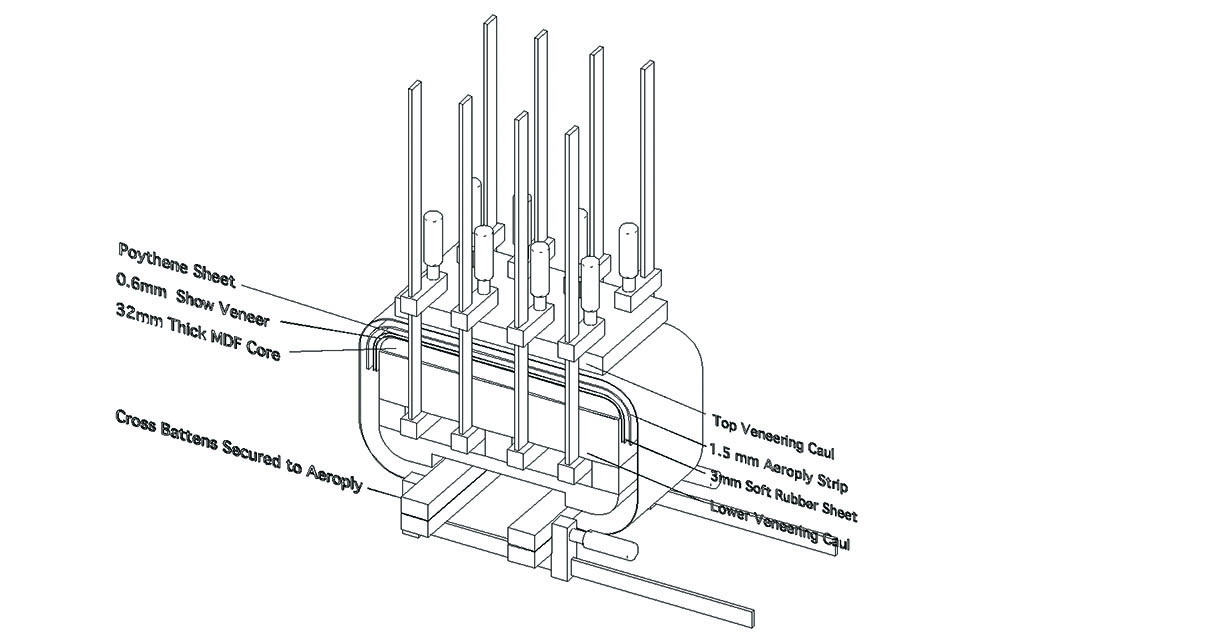 Undermounted wooden drawer runners
This project requires the construction of six drawers 720mm wide by 400mm deep. As the drawers are much wider than they are deep, my preferred design is for a pair of under mounted wooden runners as shown in the illustration on page 29. The advantage of this design is that the drawer sides can have much more of a clearance with the cabinet sides than would be the case with a traditional close-fitted drawer because the drawer is guided on the runners and not by the cabinet sides.
I usually set the drawer side clearance at 1–1.5mm so that if there is any swelling or cupping in the drawer side it will not bind on the cabinet side. To be on the safe side, I normally construct the drawer side from quartersawn material, in this case solid maple, to prevent cupping. The configuration of runners shown in the illustration, provided they are properly fitted, should eliminate any racking. The drawer should open smoothly when pulled by the right-hand or left-hand handle in turn.
The male and female parts of the runners are also made from maple as this is a hard durable material with a smooth waxy surface, although the best material to use is hornbeam if you can source it. The female part of the runners also provide support for the cedar (Cedrus spp.) drawer bottom panels. I usually make the runners 12 x 12mm in section and these are then shot into the groove on the female part of the runner so that they are an easy sliding fit. The female parts of the runners are grooved for the bottom panels, tenoned through the false drawer front and screwed into the bottom edge of the drawer back. These components must be fixed in exactly parallel to each other and to the drawer sides. To achieve this I normally cut some 18mm thick spacers, exactly square and the same width as the gap between the female runners and the drawer slips, and the gap between the two female runners. The spacers can be wedged into the drawer box while the runners are fixed in thus keeping the runners parallel. The cedar bottoms are then machined and slid in from the back and screwed into the underside of the drawer back. The tongues on the front of the cedar panels locate in a slot cut in the rear face of the false drawer front. The resulting look inside the drawer is shown in the photo above right on this page and the underside of the drawer is shown in the photo below.
The male parts of the runners must also be fixed exactly parallel on to the drawer frames. To get the spacing correct I temporarily fix an overwidth batten to the false front of the drawer and then push the drawer box into the carcass until the batten touches the front of the side panels, then I push in 1mm shims in between the drawer sides and the carcass sides. The drawer box is then perfectly parallel to the drawer sides and the drawer front is perfectly aligned with the front of the cabinet assuming everything has been constructed square. The male drawer runners can be pushed into the female slots from the back and held in the correct position front to back. The runners are screwed through predrilled holes in the underside of the frames. 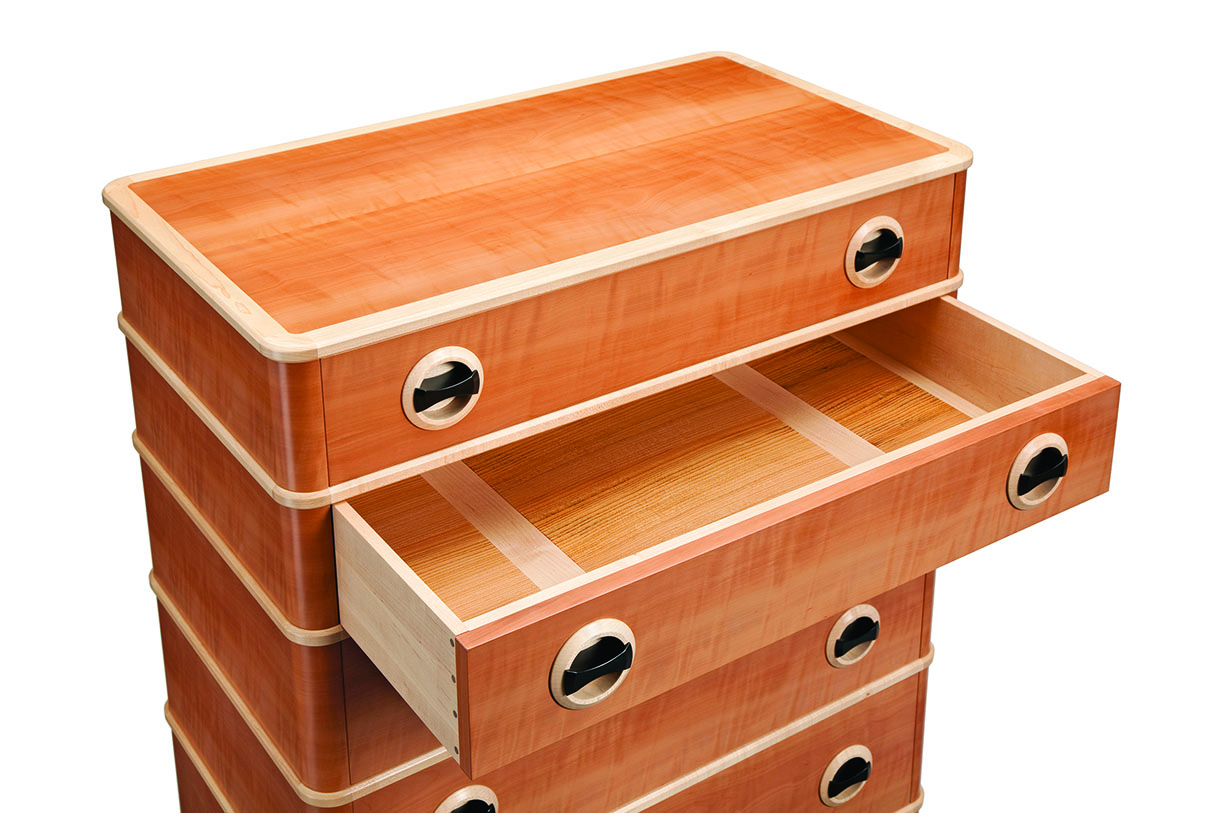 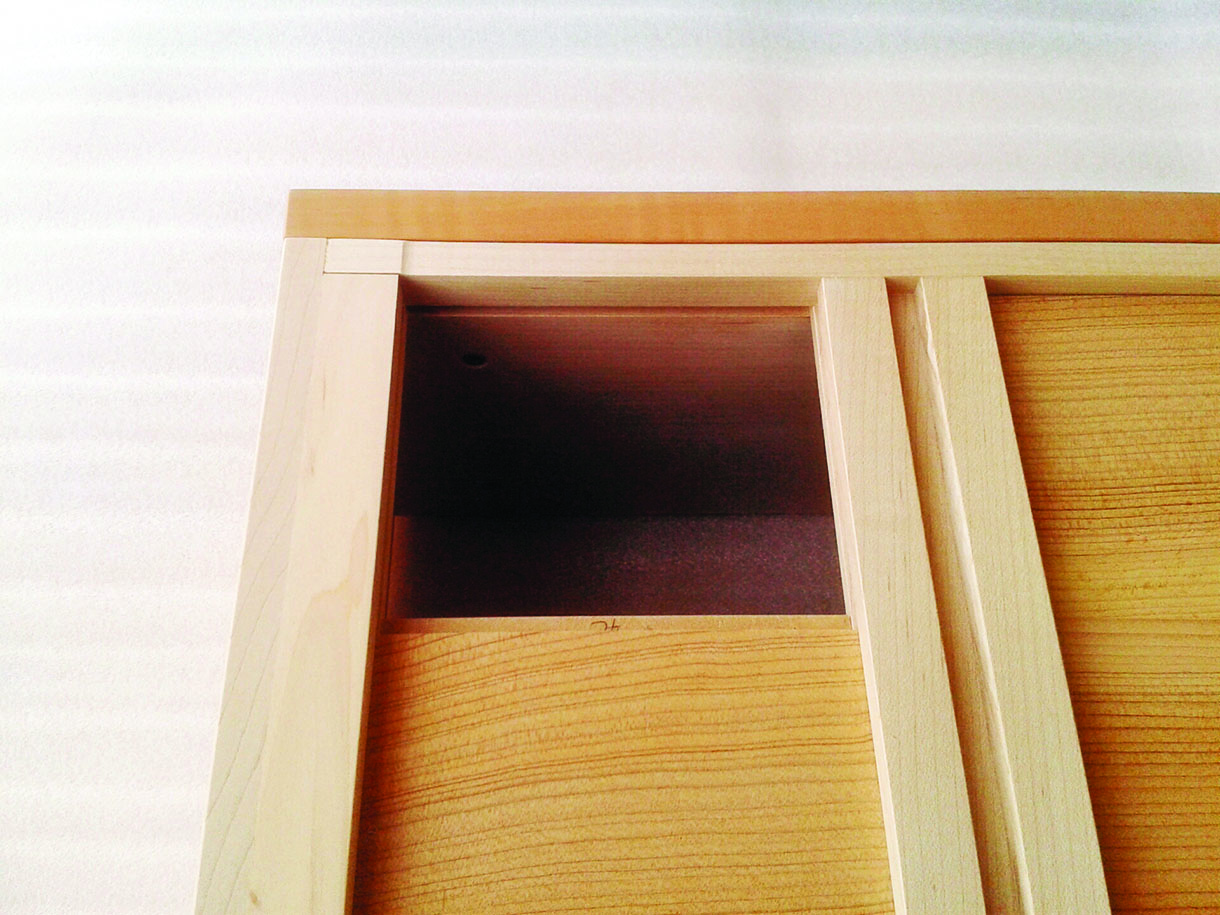 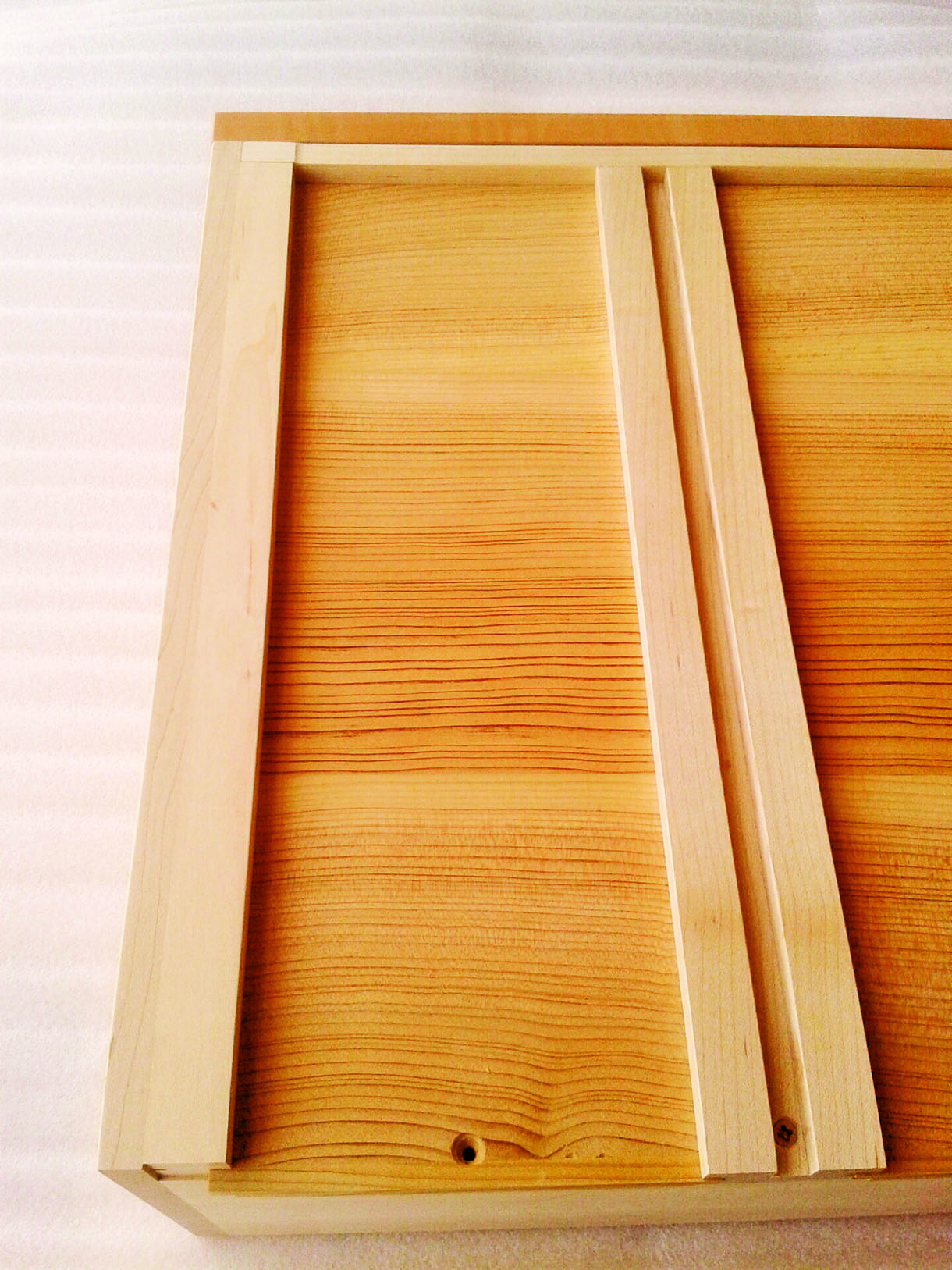 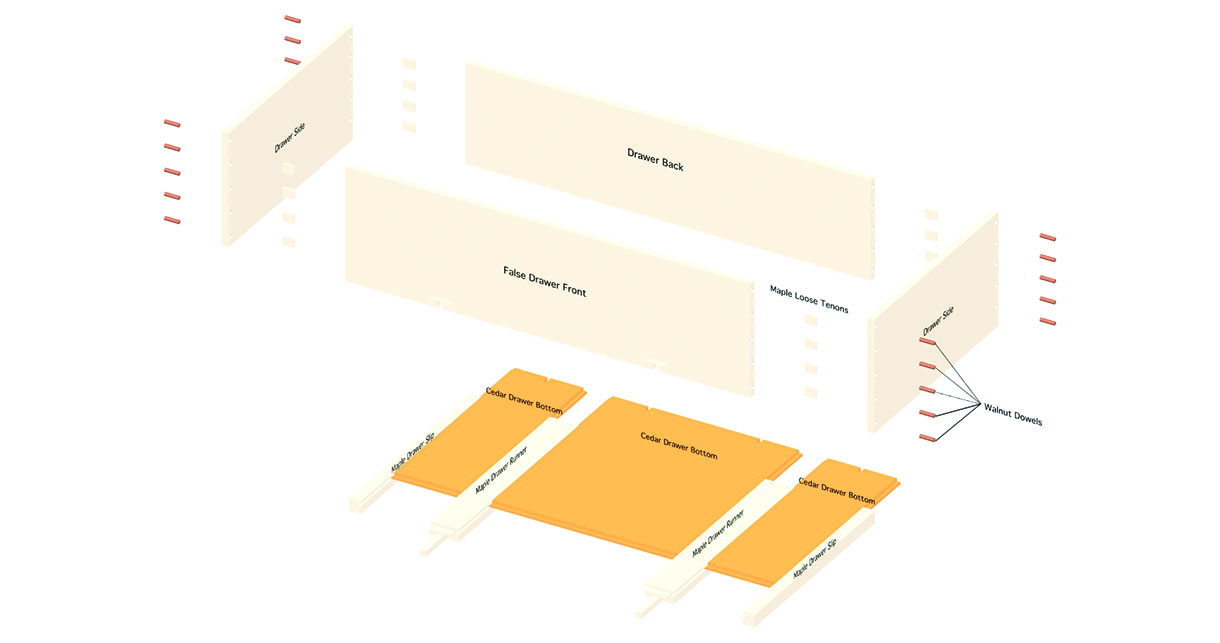 Handle detail
Although handles are small components I always find them a challenge to design, it’s easy to get them wrong and too often their design can appear to be an afterthought. Generally handles are the first components that a person physically interacts with so they must be attractive, tactile, functional and
the design must contribute to the resolved design. For this project I have chosen a circular recessed detail, the black handle providing a sharp contrast against the lighter colour woods.
The overall detail is made from three components as shown in the illustration below. The solid maple bezel has been made to fit exactly onto a 76mm diameter blind hole machined directly into the drawer fronts. The bezel has a 2mm lip that fits around the perimeter of the hole. The bottom of the hole is veneered with a maple disc. The bezel is cut from a piece of 20mm thick crown grain maple. The central hole is cut first with a router and appropriate template, the 80mm diameter blanks are then cut from the board on the bandsaw. As the material is side grain it is difficult to turn because the grain will not be orientated along the axis of the lathe. I have chosen side grain because the colour will be much lighter than end grain when finished. The outer profile is cut using a concentric jig fixed to the disc sander, which produces an outer profile of 80mm diameter and exactly concentric with the central hole. The shallow rebate for the lip can then be very carefully turned on the lathe with a very sharp square scraper chisel. The piece is then reversed in the chuck to machine the front bevel. The actual handle component is made from ebonised cherry and is screwed in from the back of the drawer front. 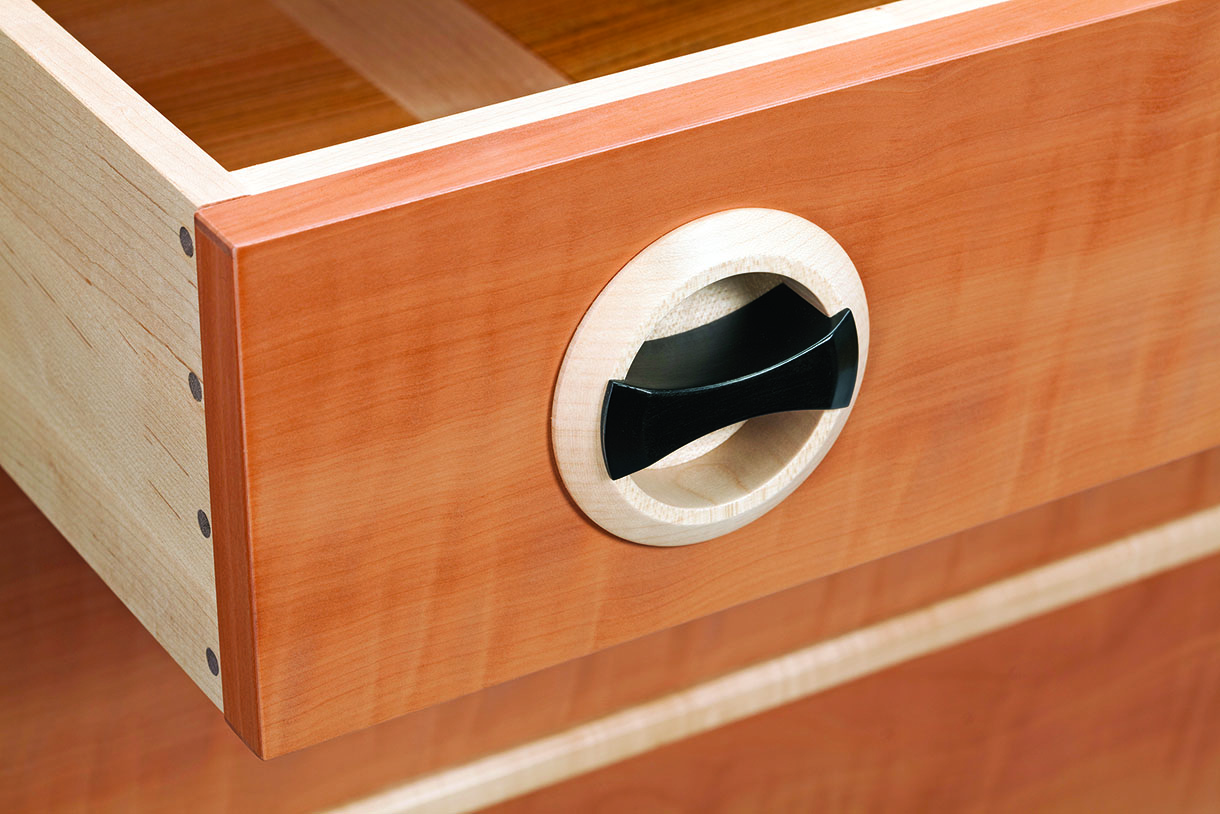 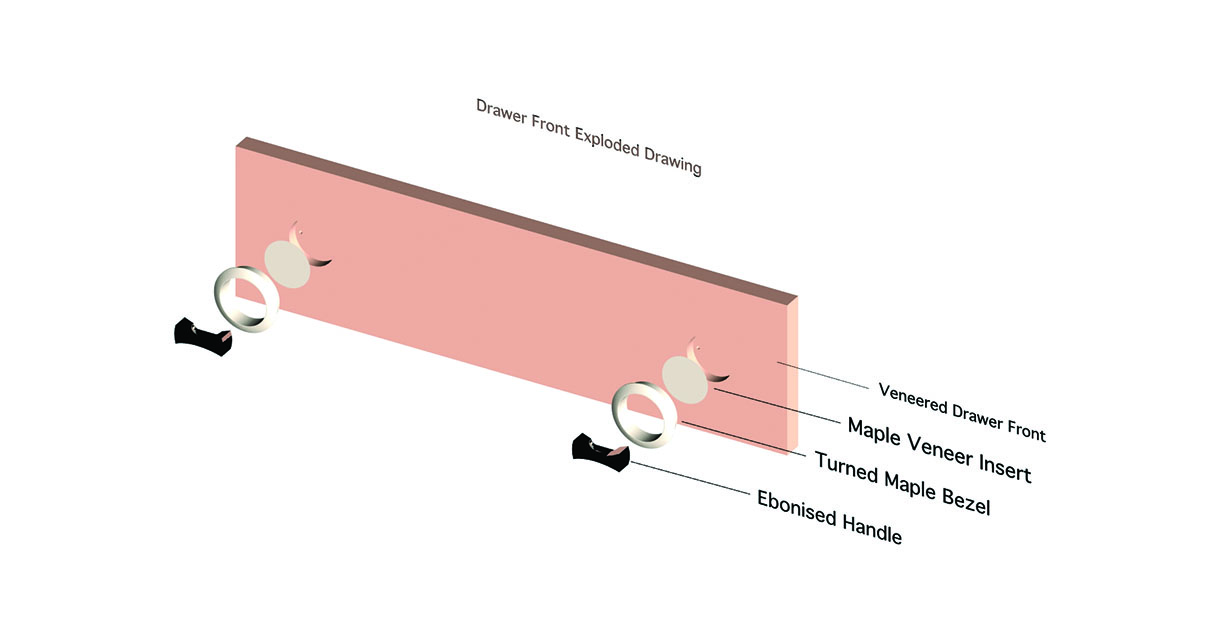 The Johnson Wax Building
The Johnson Wax Building situated in Racine, Washington was designed by Frank Lloyd Wright for the President of the Johnson Wax Company. Construction began in 1936 and the building was completed in 1939. It is a prime example of modern streamlined architectural design as Wright was influenced by the Art Moderne style, which was popular in the 1930s. The design was revolutionary in many ways. It has more than 200 types of ‘Cherokee red’ curved bricks that make up the exterior of the building and tubing made from pyrex glass running from the ceiling to let in light. The light shines into the building through several layers of glass tubing, which cannot itself be seen through. The building still serves as the global headquarters of the SC Johnson company
In 1944 the 14-storey research tower was added, which made the building even more impressive and added a vertical counterpoint to the horizontal structure of the main building. It is one of only two high-rise buildings remaining by Wright. The tower is no longer used for research but is open to public tours where visitors can see the labs preserved as they would have been when they were in use.
The Johnson Wax Building and tower are on the US National Register of Historic Places and in 1976 they were designated National Historic Landmarks. 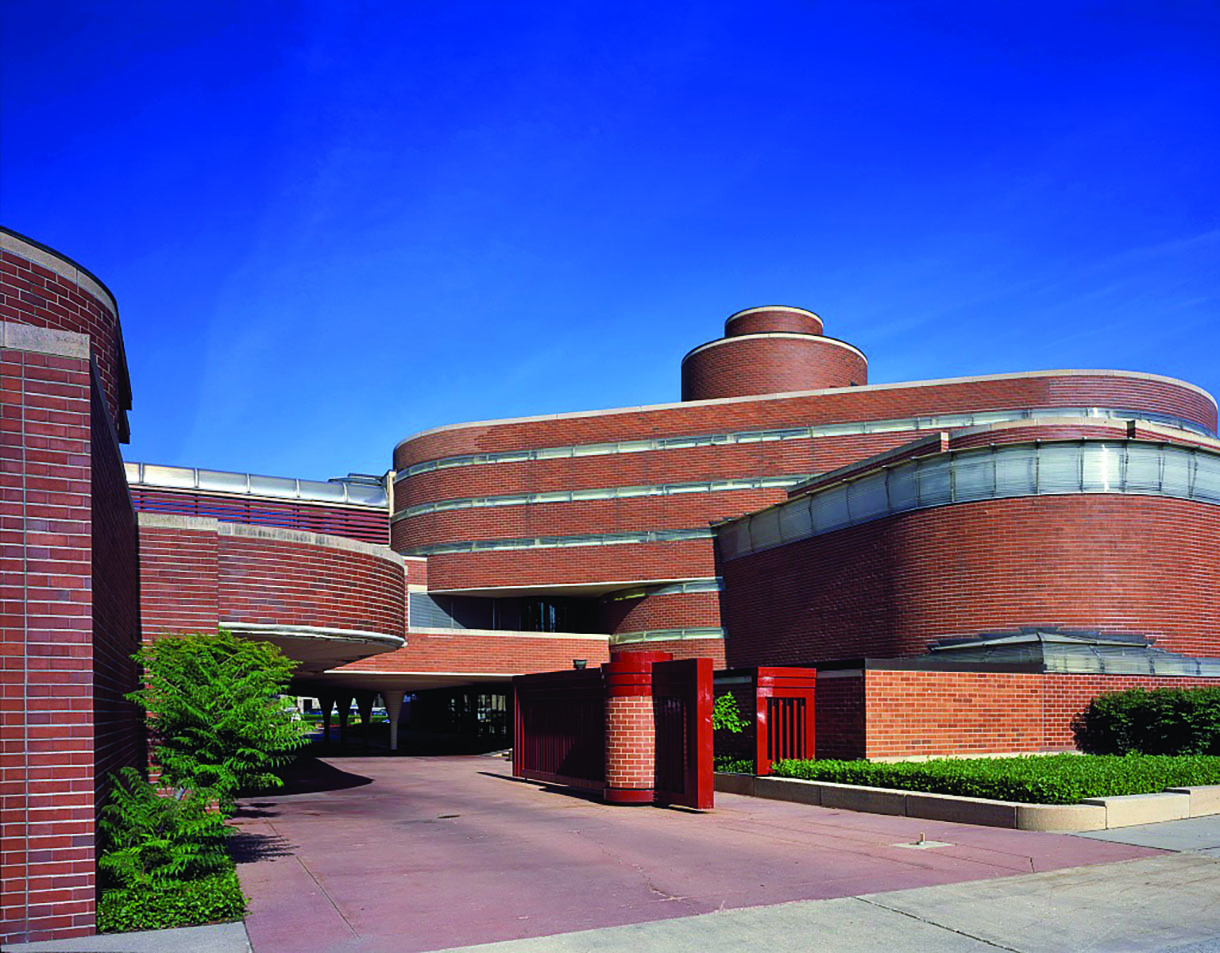 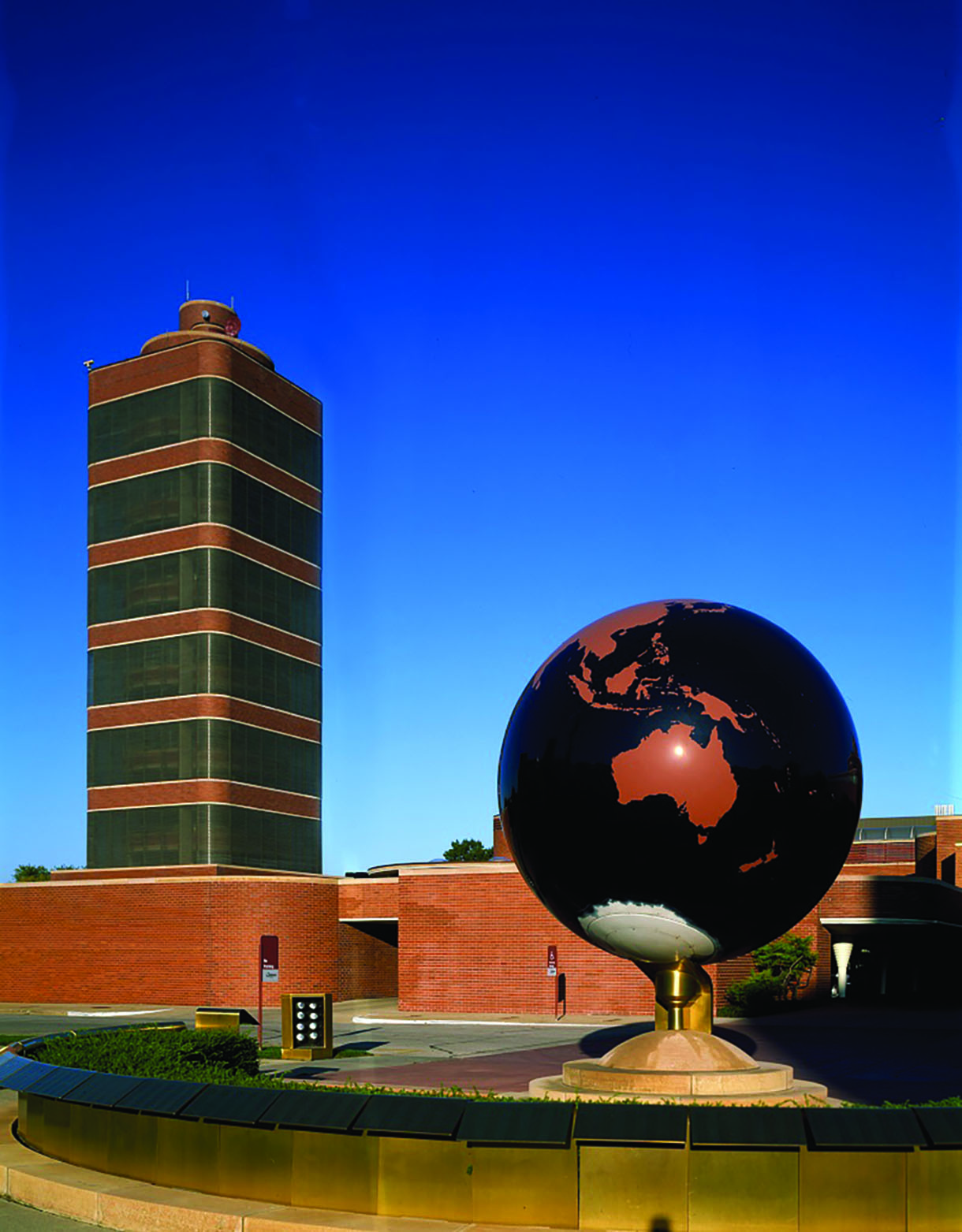 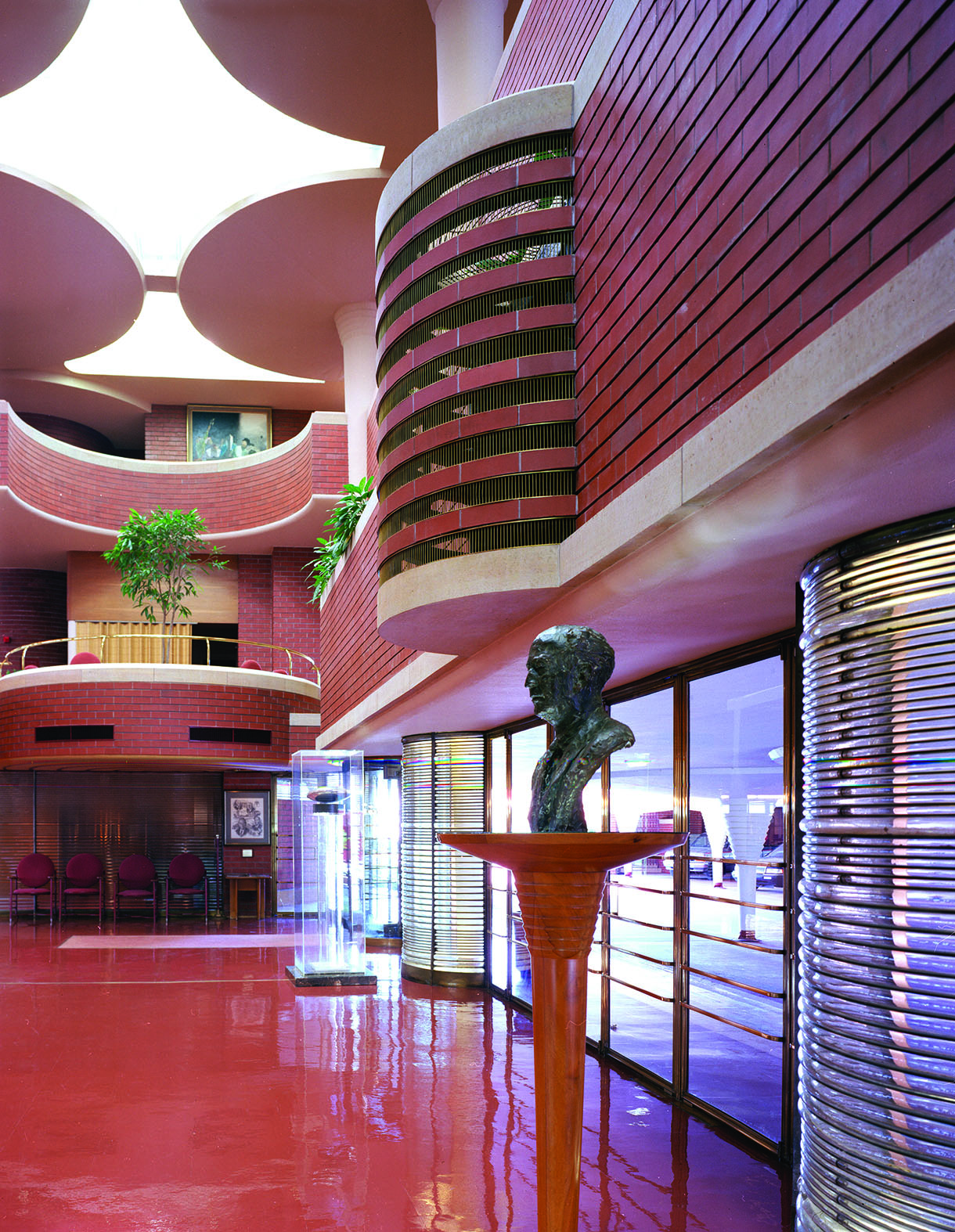 Open area at the Johnson Wax Building, headquarters of the S.C. Johnson and Son Co. The building and its furnishings were designed by Frank Lloyd Wright.