The Oak Within Sideboard:
Chris Wiseman explains some of the key features on the first ever sideboard he made as a student 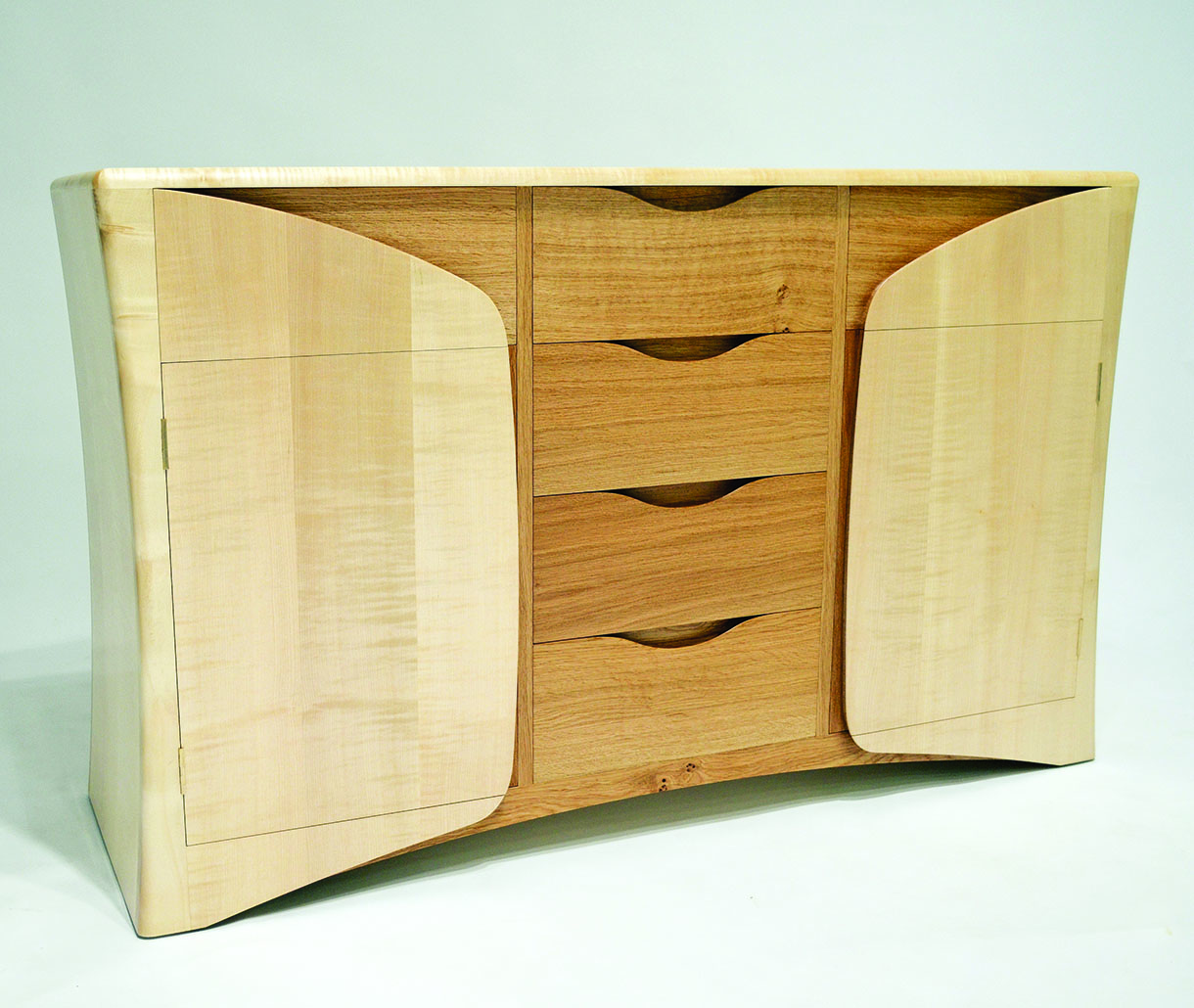 As an amateur woodworker, I began my journey to become a skilled cabinetmaker at Waters & Acland’s fine furniture school. Working through set projects of increasing complexity to develop the essential skills, I eventually reached the stage where I had to design and make my very own pieces of furniture. Incorporating everything I had been taught, I set off to produce a sideboard to the best of my abilities. The Oak Within sideboard is one of my second main creations that I recently completed and I am very pleased with how it has turned out. Before I would have looked at a piece like this with admiration and wonder but with little idea of the patience, care and appreciation of the timber that is needed to create it. Now, not only can I fully appreciate the time and effort involved, but also enjoy the feeling of accomplishment that comes with creating such works of art. Although primarily a traditional frame and panel construction, what define this piece are the curved sides and integrated handles on the drawers and doors. This article explains how I, with guidance from head tutor Graham Loveridge, decided to tackle these two features. 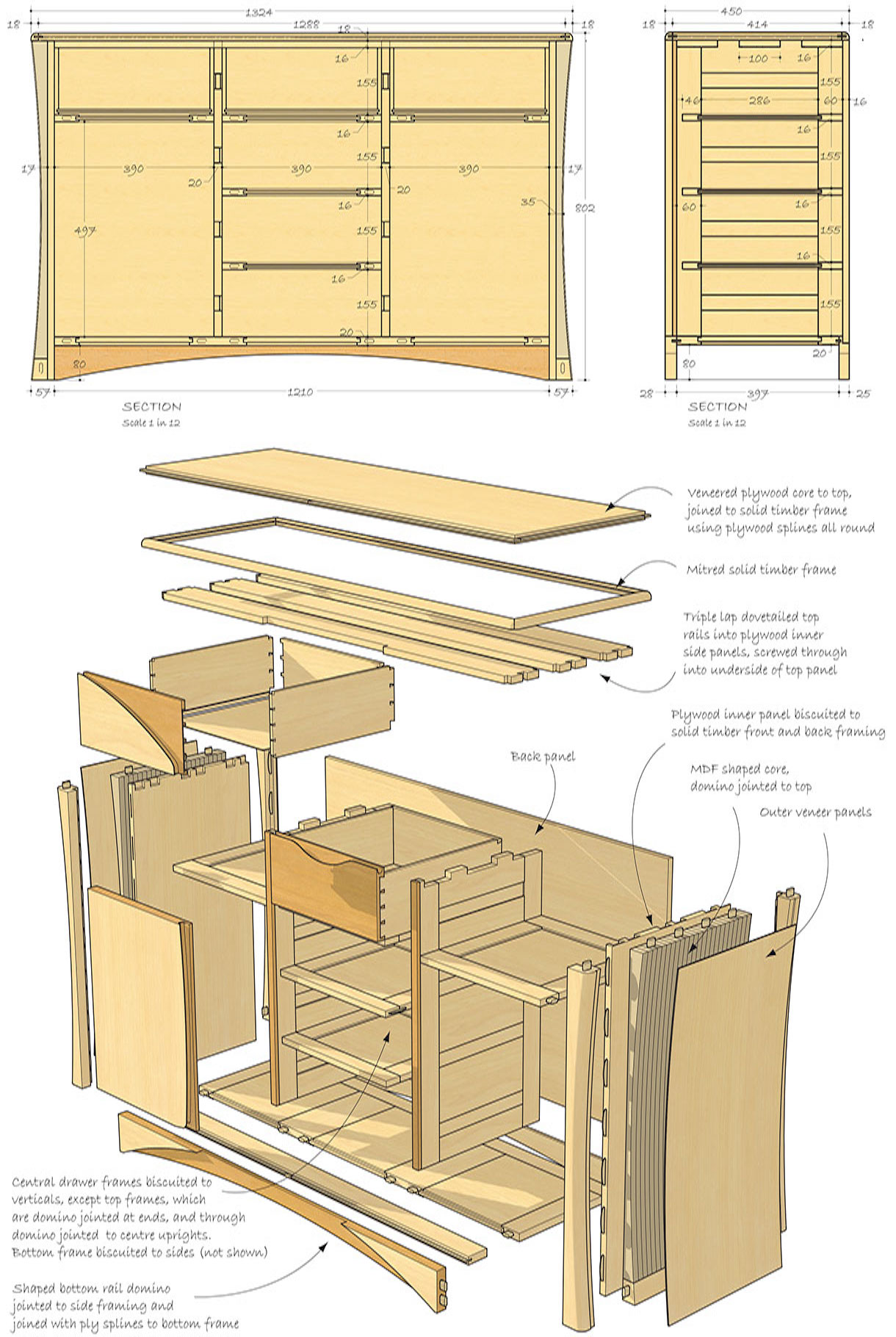 About those curves
One of the first challenges to work out on this project was the curved sides and how to produce a solid, load-bearing part that is so integral to the structure. I could not afford for any movement as they had to flow seamlessly into the front, top and back of the cabinet and so we came up with two possible solutions: either veneering a laminated structure or a solid form. I decided on the latter after weighing up the pros and cons of a one-off build. Had this been something I would be making more than once, I would have considered creating a former and laminating aero ply to create an arc. This arc would then be used on the exterior with a flat veneered ply panel on the inside, leaving a void between the two. A key benefit to this method would be less weight overall and a faster construction time, but only once the former had been made, so it did not seem worth the extra time for a one-off piece. The route I took was to create a solid core consisting of numerous strips of MDF shaped to the correct radius, glued together and then veneered on top. Although heavier, it would create a completely solid piece with no movement issues. Epoxy resin was primarily used for the glue-up as conventional glues such as PVA and powder glues add moisture, risking potential movement.
The veneers for both sides, as well as for the whole piece, were made in the workshop and calibrated to 2mm from the same stock as the rest of the sideboard. This keeps the wood consistent in tone and grain structure, something that is very hard to match up when sourcing veneer from a different tree. As the inside of the panel has a drawer running along it, the thick veneer allowed for any truing up of the carcass and for general wear from drawer use, which would have been too risky with regular 0.6mm veneer. On the outside the thickness allows for any discrepancies when flushing in with the top. When it came to fitting the veneer to the outside face I used a finely tuned block plane, taking whisper shavings at a very slight angle so that the panel effectively wedged itself into the rebates. The reason being that, as the panel is pushed in it compresses the joint line, making it as invisible as possible. Not an easy task on light woods such as sycamore (Acer pseudoplatanus). However, it is important not to plane at too much of an angle. At first the joint line may look perfect but as you start sanding back, that glue line will get bigger and bigger!
Once the sides were made, they were jointed to the frame and panel base as well as to the drawer shelf using Dominoes. They are stronger than biscuits and strength is key in such structural places. The three top rails were then dovetailed into the top pulling it all together, unfortunately never to be seen again once the top was on.
This was the main reason for having the plywood back, for it allowed a solid structure to dovetail into. Had the whole side panel been MDF, the fibrous structure of the material would not have been sufficient to joint into. The top of the sideboard is veneered ply for the same reason as the sides; there cannot be any movement.
This was screwed down from the underside of the top rails, but when it came to the edges they were again reinforced using the Domino jointer; it’s a handy tool! There is no shadow gap or dividing line to hide any discrepancies in movement, so to ensure the top sat flush with the sides they needed to be securely anchored down and pulled in tight. Screws alone just wouldn’t have been adequate for the job. 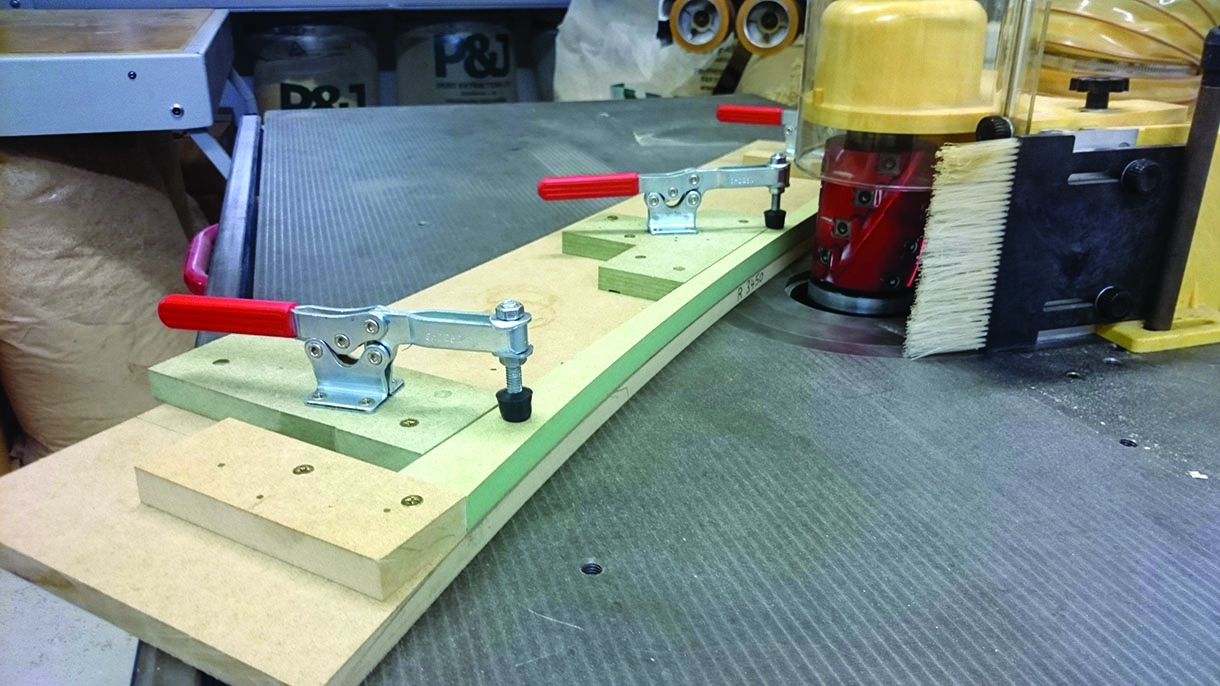 Each MDF strip is spindled to the exact same size 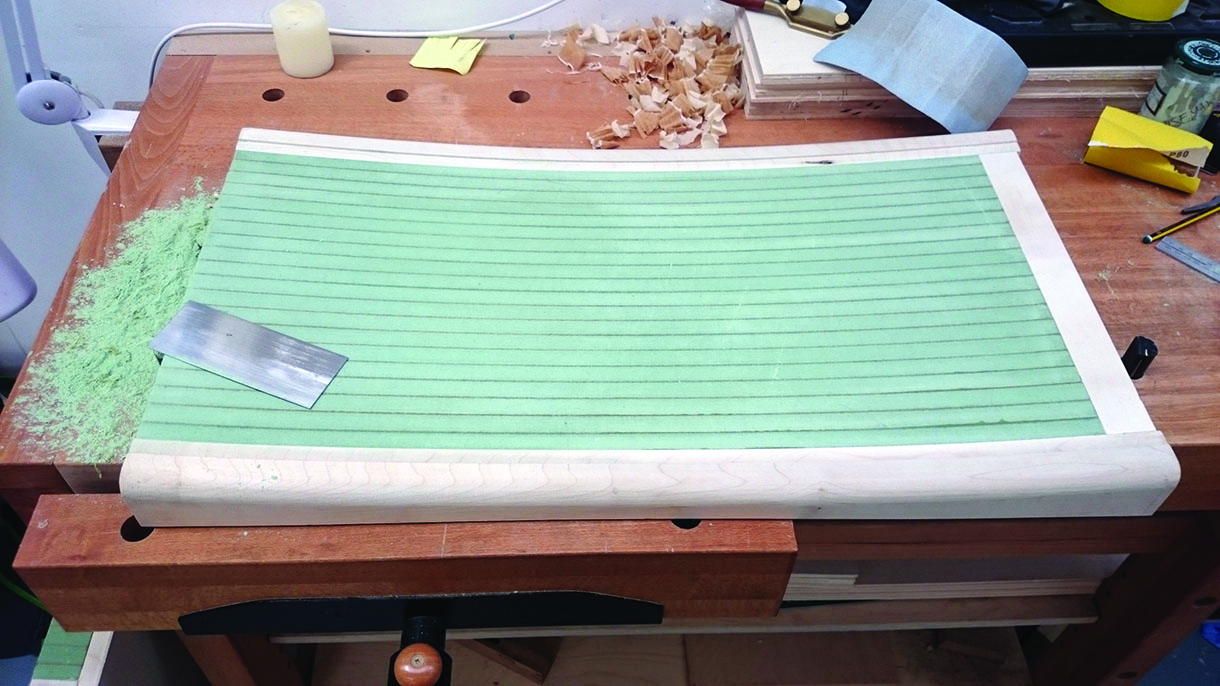 Any discrepancies were taken away by using a stiff card scraper. Wear a dust mask! 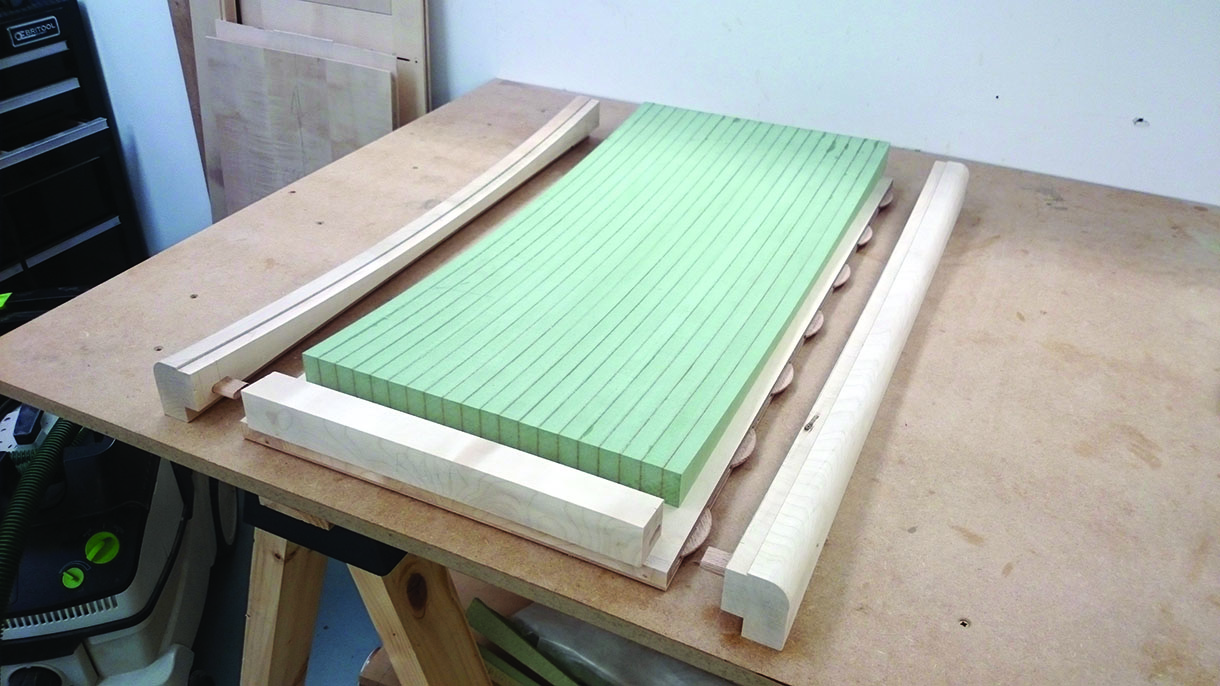 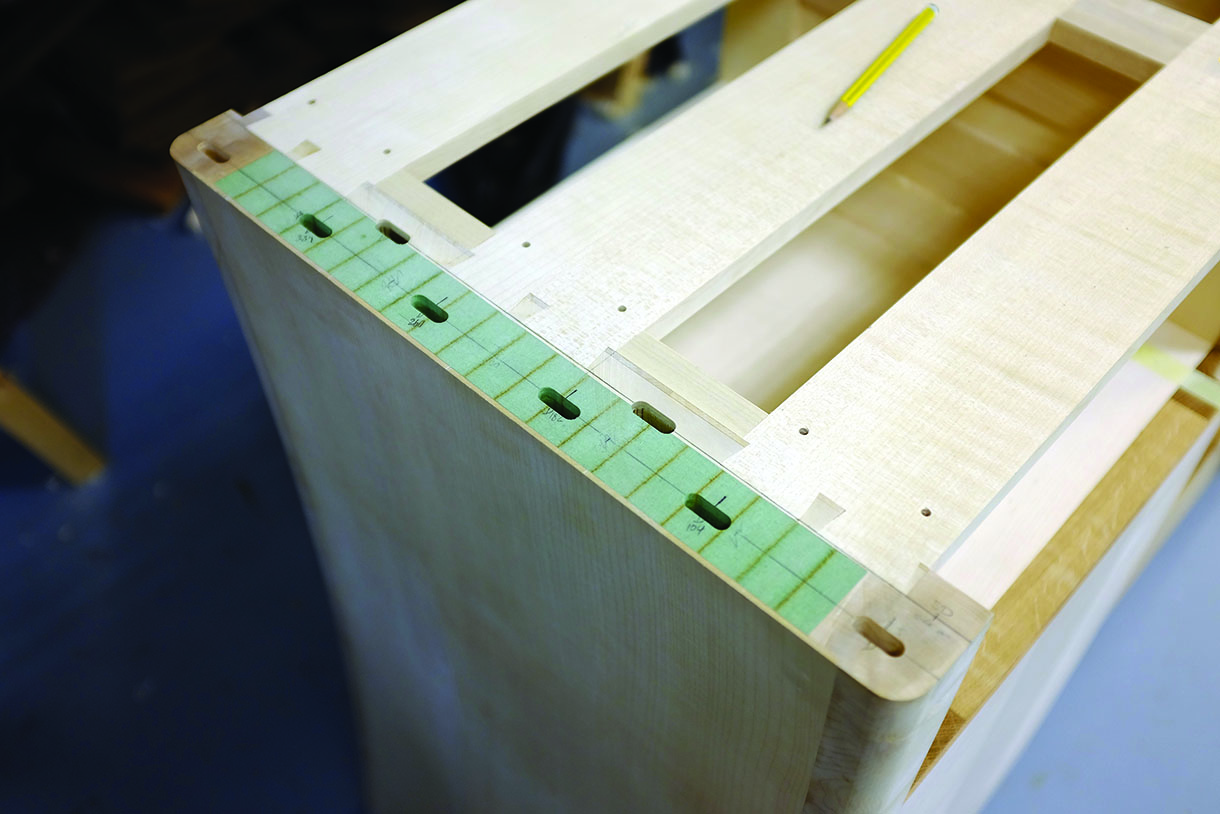 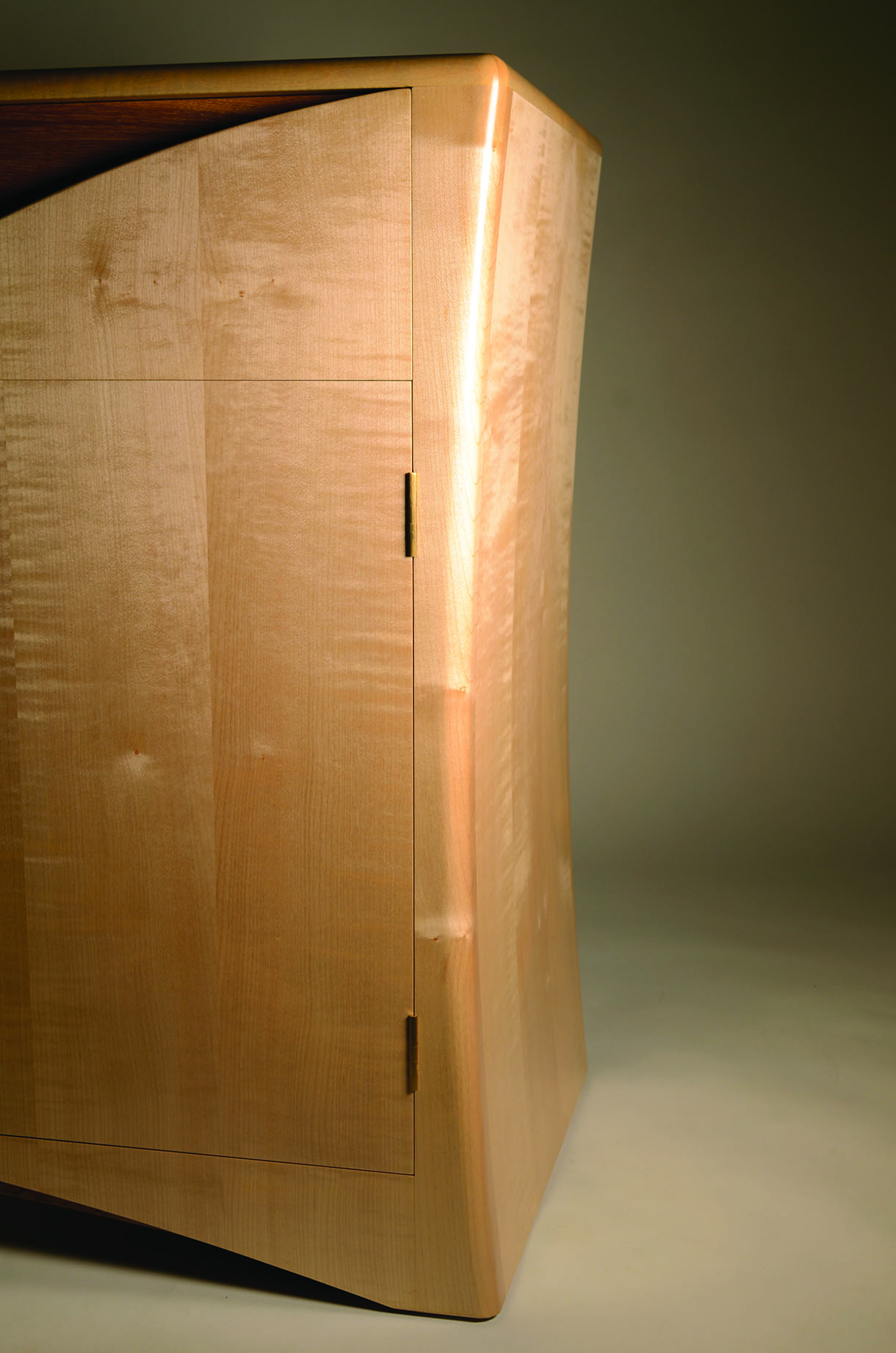 Learn from your mistakes
Those with keen eyes will have probably looked at the picture of the construction and asked themselves why I didn’t just create the MDF, ply and veneer core as one and then joint that to the solid side supports instead of what looks like a rather complicated approach. Well you are right; I basically made a job more complicated for myself by throwing in rebates here and there. Wanting the piece to be the best it could be, I kept playing with ideas and designs even after I had ‘finalised’ it. This resulted in me changing a critical area right as I started to make it. Rookie error but it’s all part of the learning process, right?

The integrated handle
I love this feature; it brings seamless integration between the handle and the rest of the piece. It is perfect for that sleek look that also adds an element of momentary curiosity as to what is going on. Throughout, I tried to apply my newly acquired knowledge of timber movement and making methods. Sketching down ideas is one thing, but once you understand the processes involved, it opens up whole new possibilities of what’s feasible and what isn’t. Therefore, when it came to sketching out the front of this sideboard, I was constantly thinking about how it was all going to work and coexist.
The biggest worry was movement from removing so much material on only one side of the drawer. We decided it would be safer to apply the veneer and remove material after the drawer had been made and fitted, which I’m sure you can imagine, is a nerve-racking process to do once so much time and effort has already been invested. Nevertheless, it helped in two ways. Firstly, it allowed the finger pulls to flow perfectly from drawer to door as they would be marked out after, and for the grain on the sycamore veneers to align. Secondly, the structure of the drawer box would keep the drawer front from wanting to twist or at least greatly restrict its movement.
The whole process was actually very satisfying and not as scary as I initially thought it would be. Even routing out the finger pull itself was rather pain free, although the same cannot be said about sanding the inside of it, especially when you have big fingers! As is the general rule with most routing, not taking too much off in one go is key here. I found that three passes with the router worked perfectly. The first pass removed the majority of the wood; the second was with the bearing up against the jig, which created the final shape; and then with the third pass I ever so slightly tapped the jig back just a fraction to take a final quick skim. This leaves a nicer finish with no tears and, most importantly, no burns. Two passes would have probably been adequate but the bit I used had seen better days so this technique helped.
The finger pull handle runs from the top corner of the drawer all the way down to the corner of the bottom rail. That part on the rail is purely cosmetic to continue the flow, but does so happen to come in handy when lifting the sideboard. The run down the door required some tactical placing of tenons since the last thing anyone wants is to expose hidden joinery where it is not welcome. The door construction itself is an oak frame and plywood panel, flush on the front and inset on the inside. Again, because of the veneer, the door needed to be solid. They were hung using solid brass hinges and held in place with rare earth magnets. An unexpected gem was found when I first shut the door with the magnets in place. Due to the fine gaps around the doors, the air pressure acted as a cushion, making it almost impossible to slam. The magnets then gently pulled them closed. Soft closing doors, what a bonus! 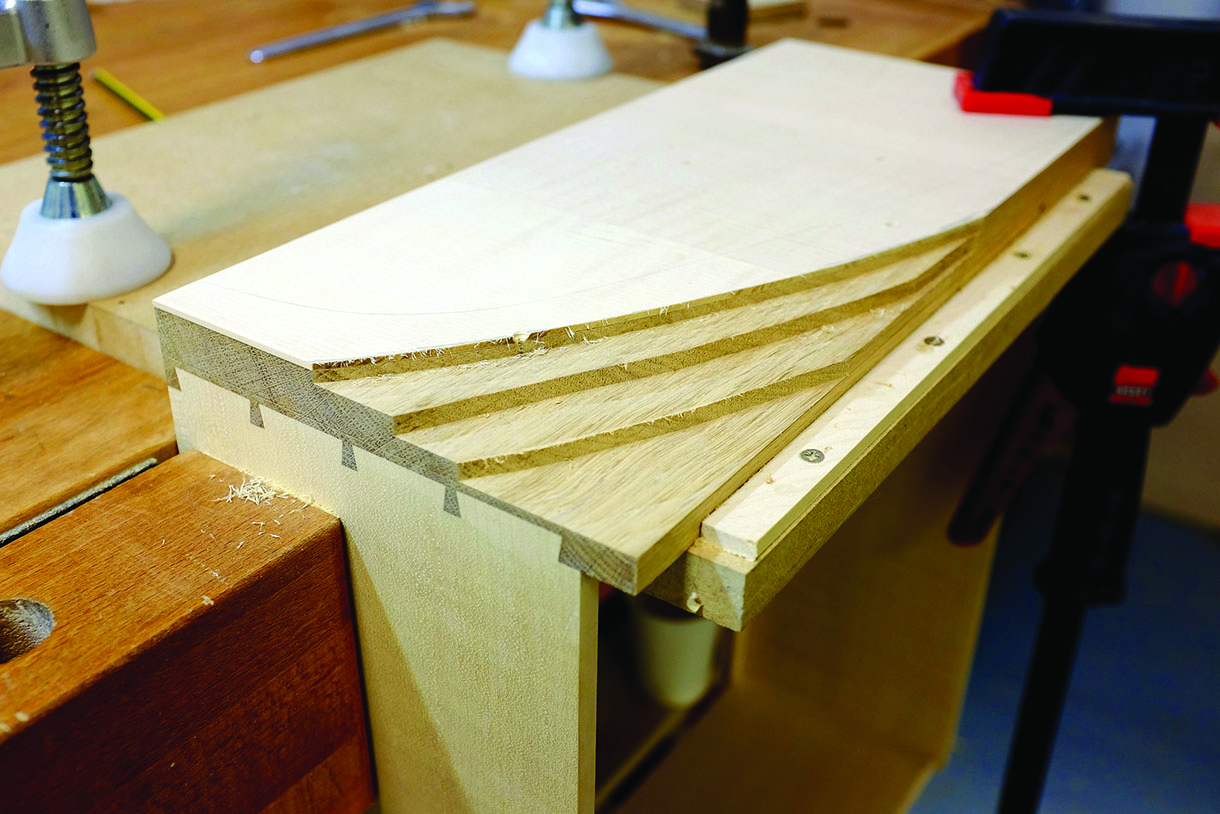 Gradually routing away the front leaving about 5mm from the line 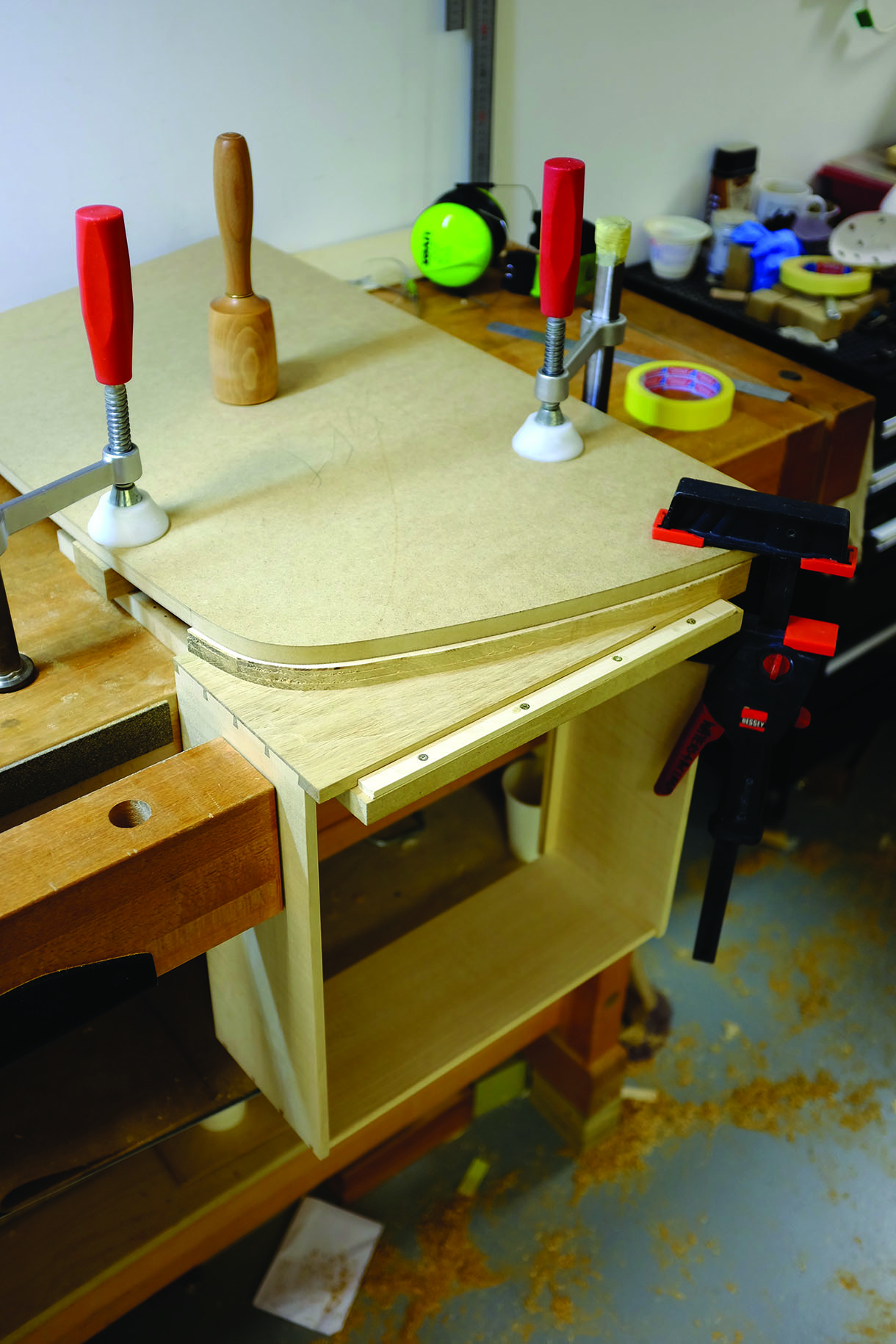 With the template I can rout to the final shape. A Perspex base is added for extra support on the router 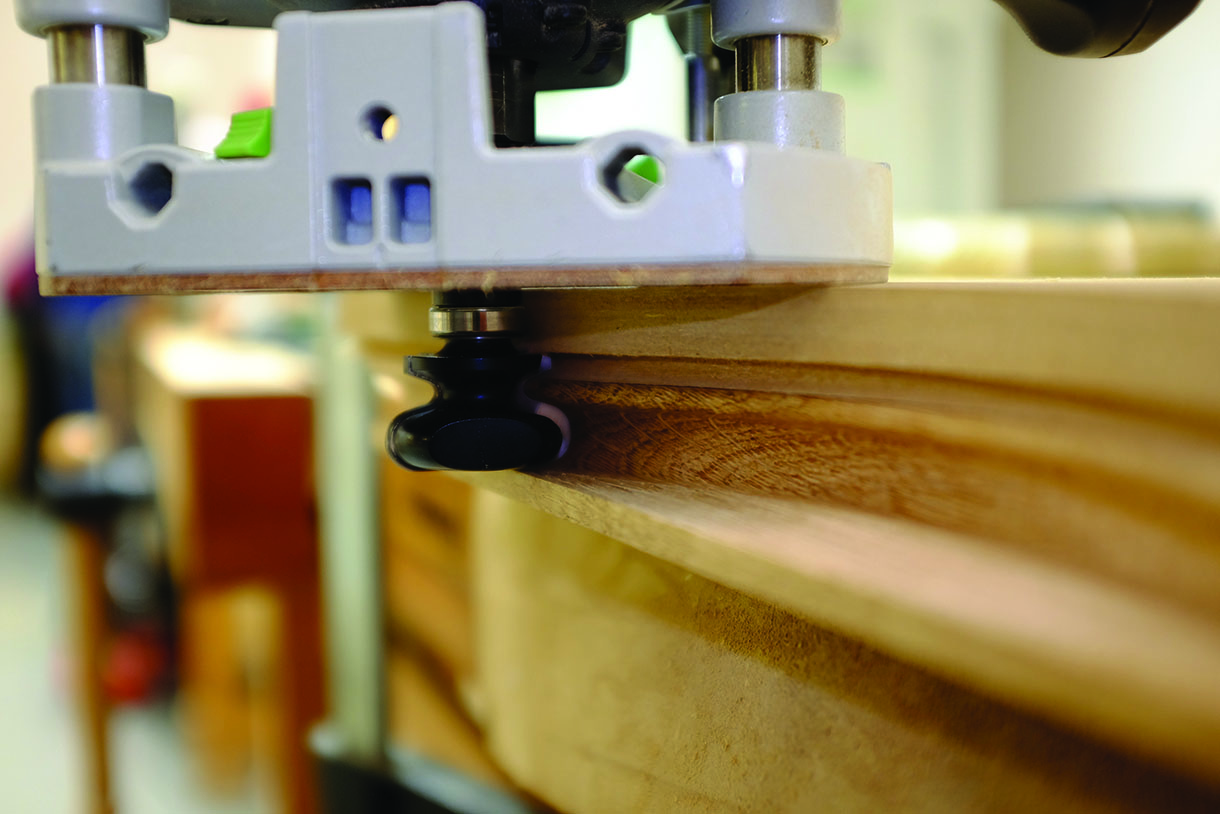 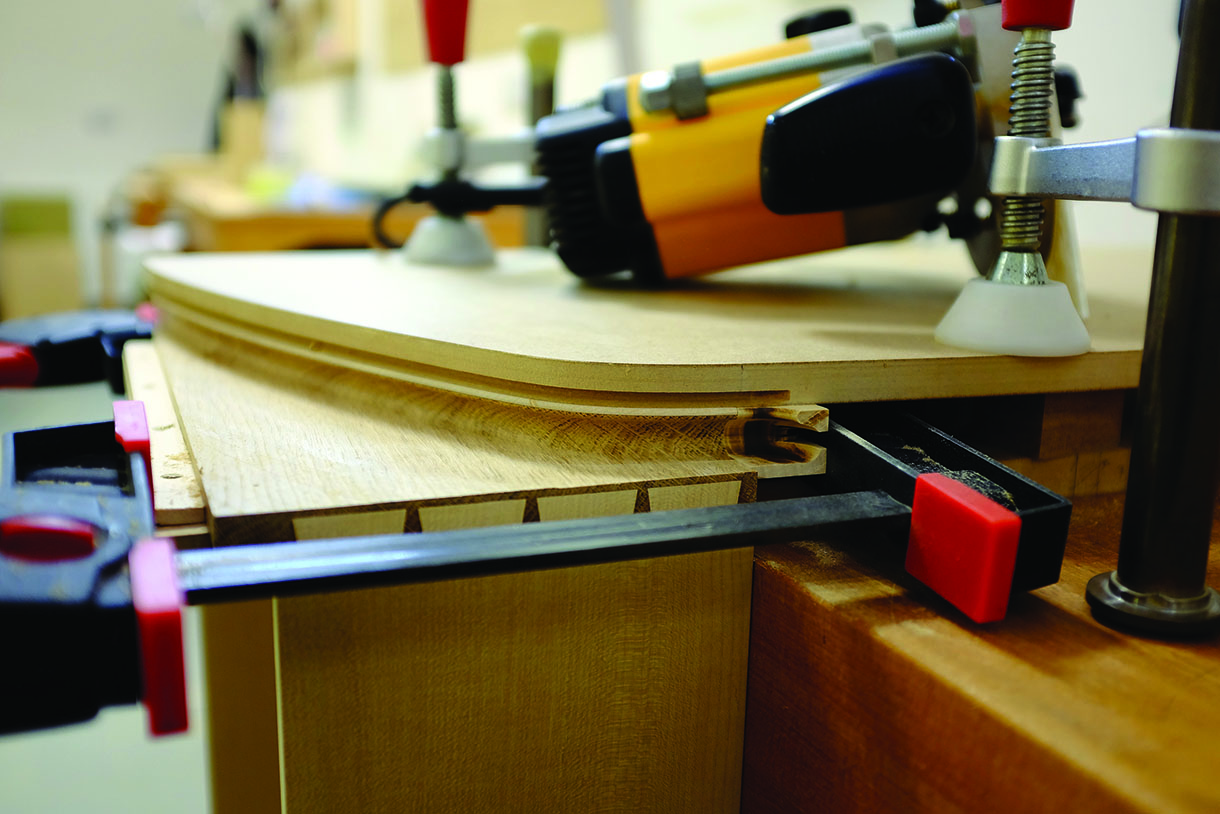 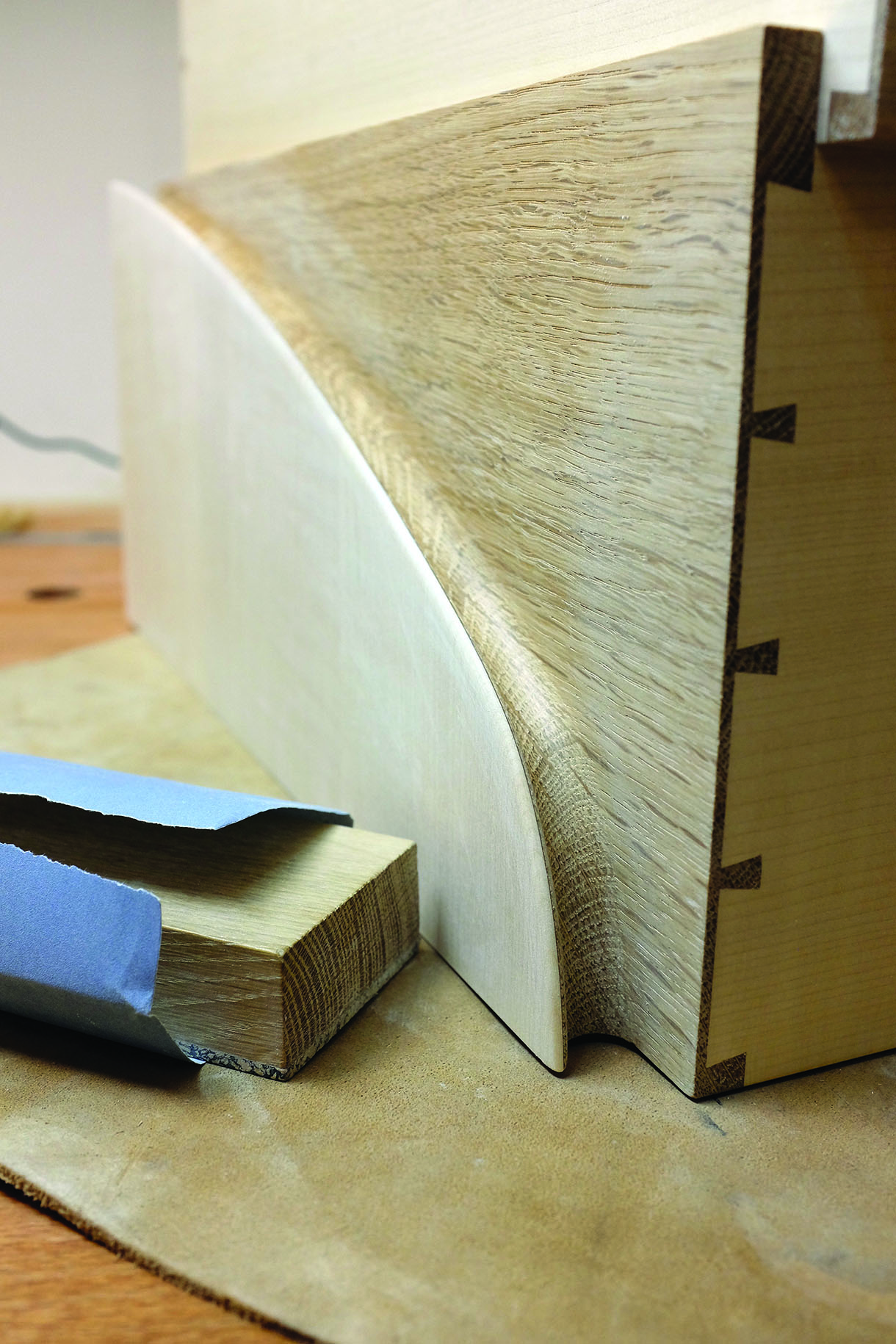 The painstaking process of sanding up. But it sure does leave a beautiful finish! 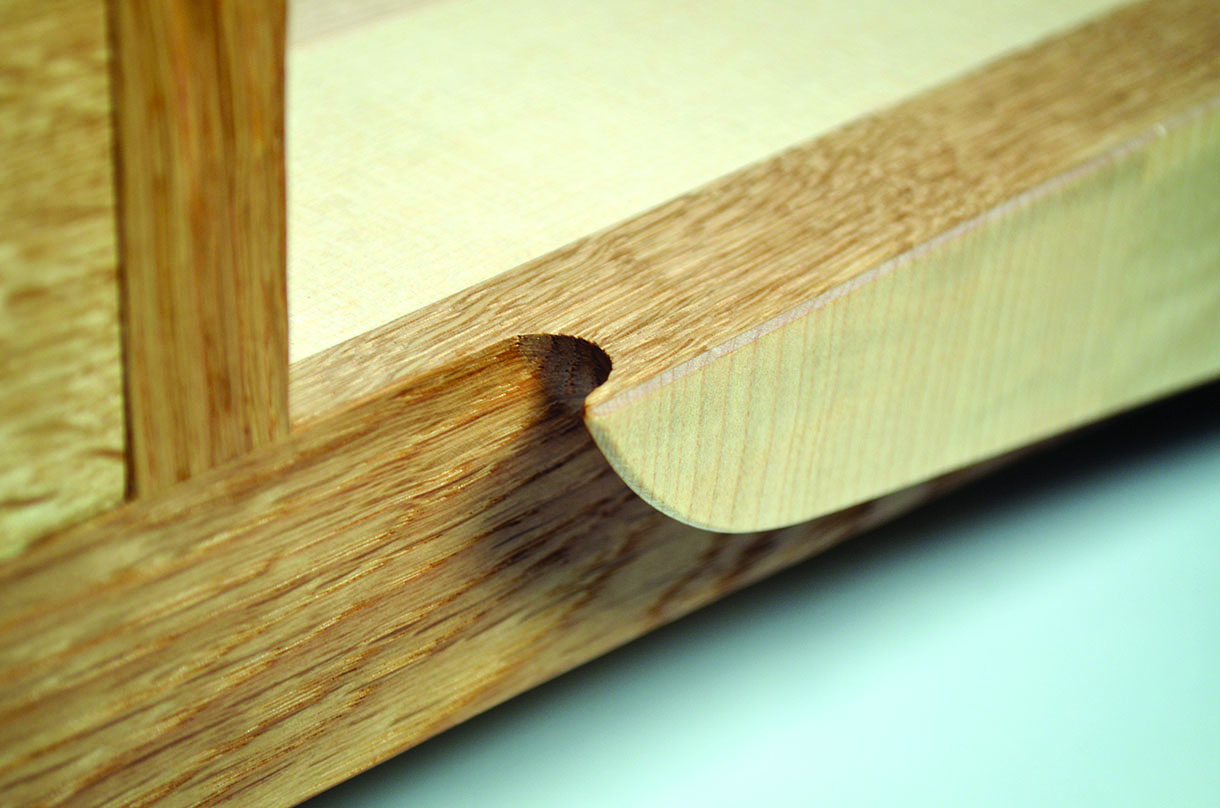 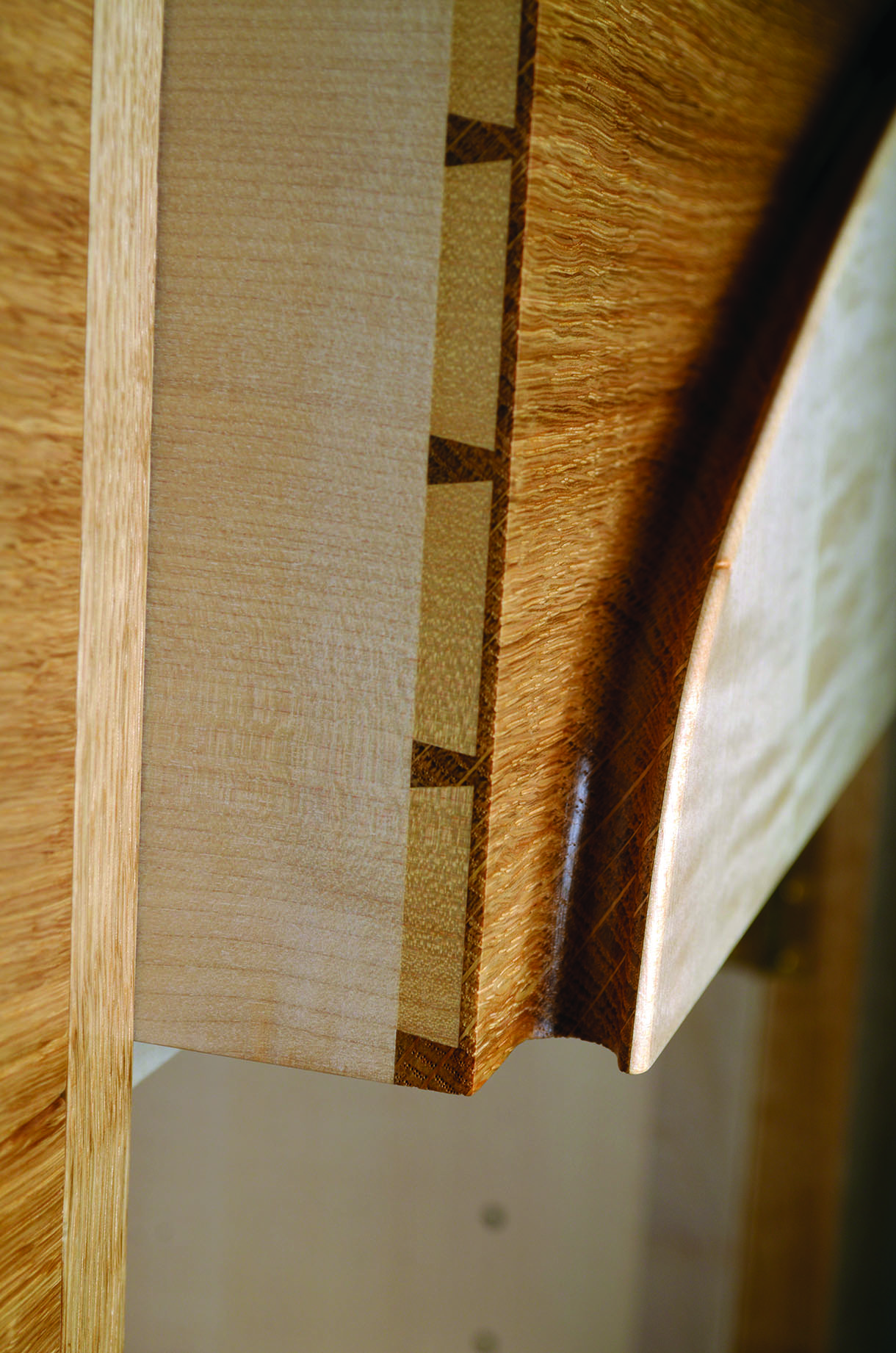 Conclusion
This project really had me thinking about problem-solving, a key element of cabinet making. These problems included working out how the timber would behave, how I would approach the build and how it would all come together to form a piece that was both aesthetically pleasing and functional. There have been parts to this sideboard that I spent much longer designing and working out than actually making. But then if you don’t, you will never end up with something (at least in your own eyes) that is as good as it can be. I wanted to move away from my comfort zone and go far beyond something I would have ever thought was possible 18 months ago. Now, having created this sideboard, it has made me even more eager to push myself further and to see where else my creativity and imagination can take me. The joy of woodwork! 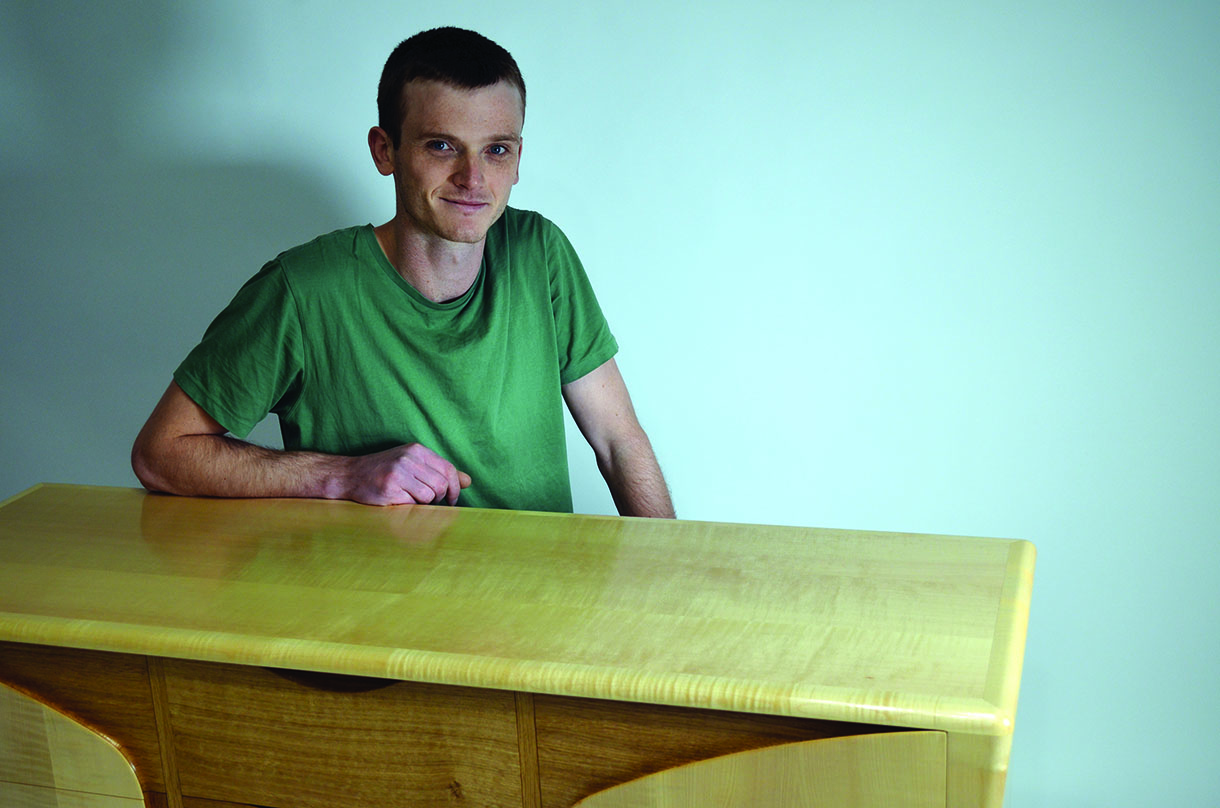 Finding the Oak Within
My design brief was to create a piece to practise making ‘piston-fitted’ drawers, as well as including some doors. That naturally lent itself to producing a sideboard. I imagined having something sleek, smooth and simple, yet striking. The finger pull style was the obvious choice for me and also ticked the box of something I hadn’t practised before. Once I started sketching, the cabinet evolved and I suddenly realised that there was a resemblance to a tree in the design, so I played on that for a while. In some ways it looks like two swinging saloon doors opening up to nature, the tree within. I have to admit that wasn’t initially my intention but sometimes when sketching away, you find ‘inspiration’ was sitting there the whole time. 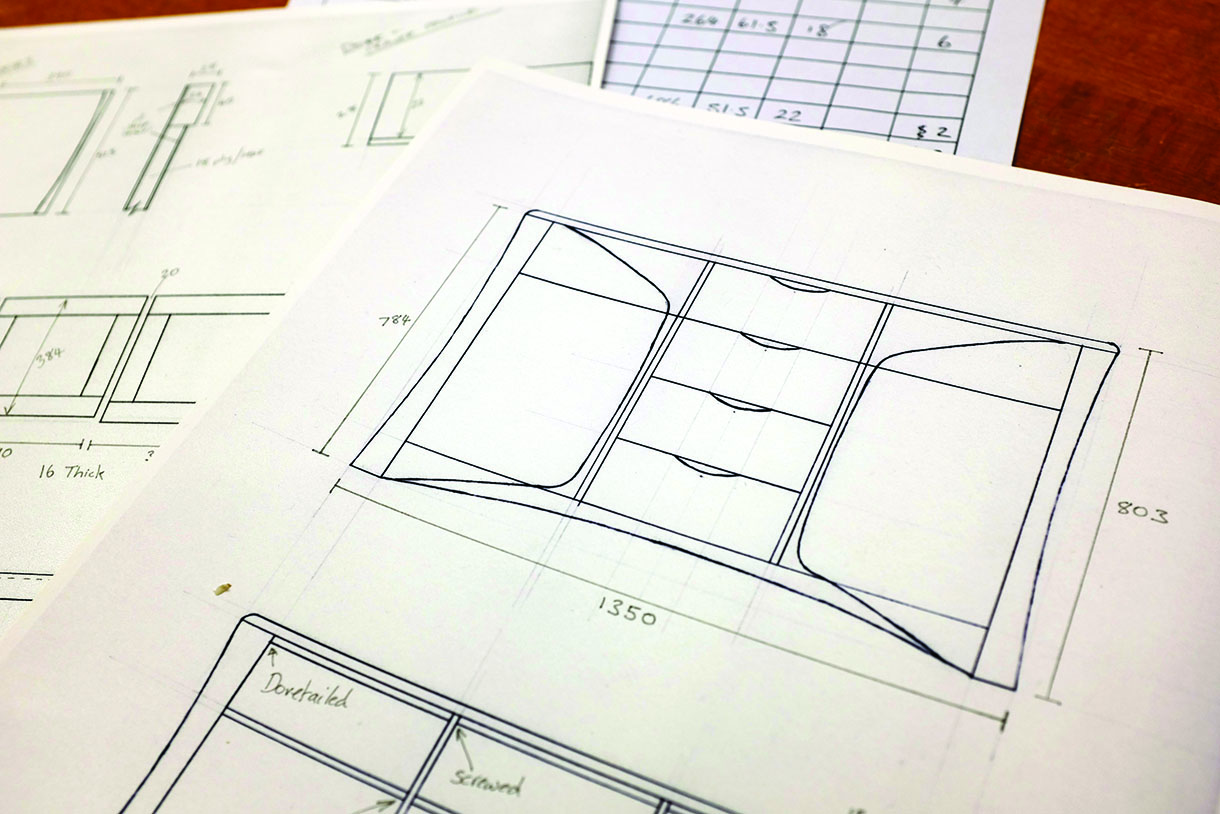 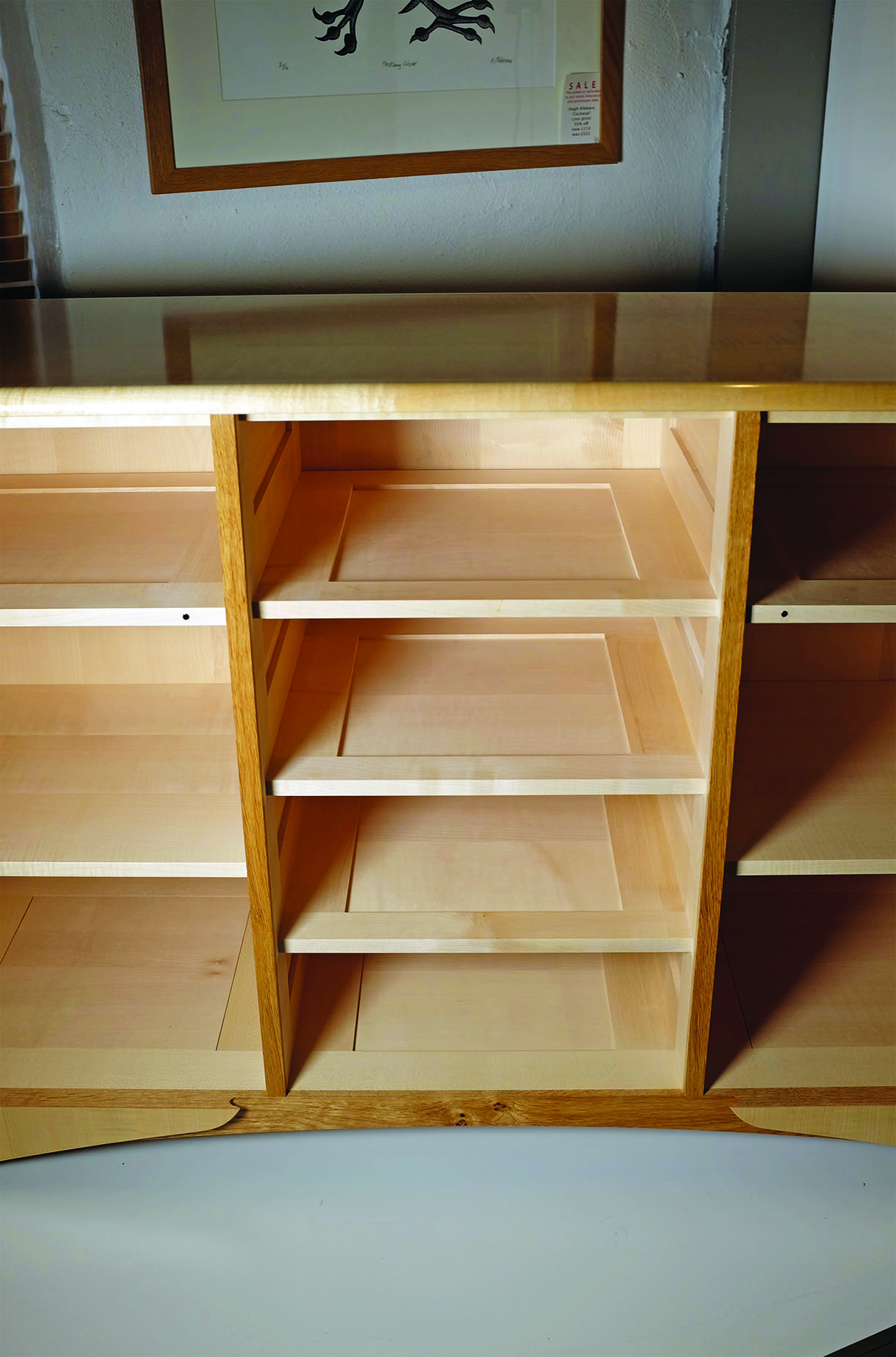 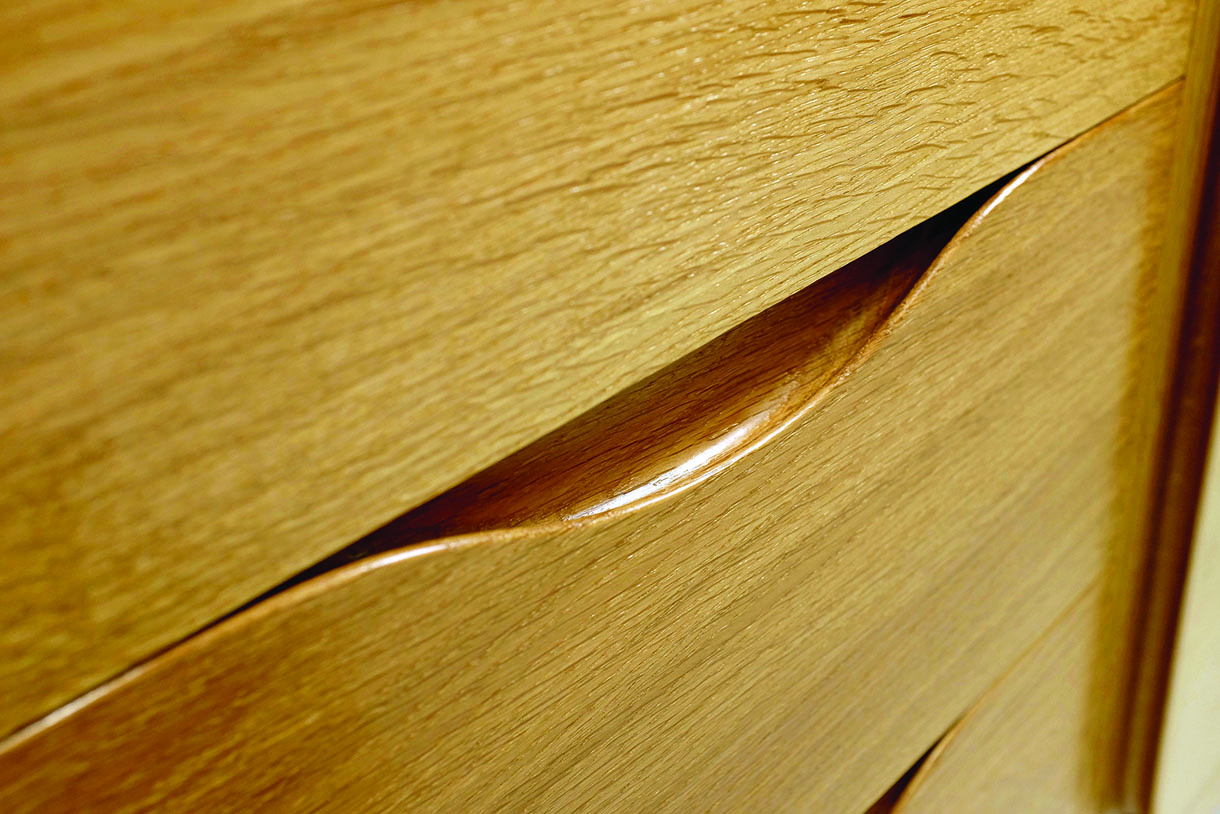