Tapered Sliding Dovetails by Hand:
Canadian woodworker Charles Mak shares his method for cutting this seemingly complicated joint with the most basic of hand tools 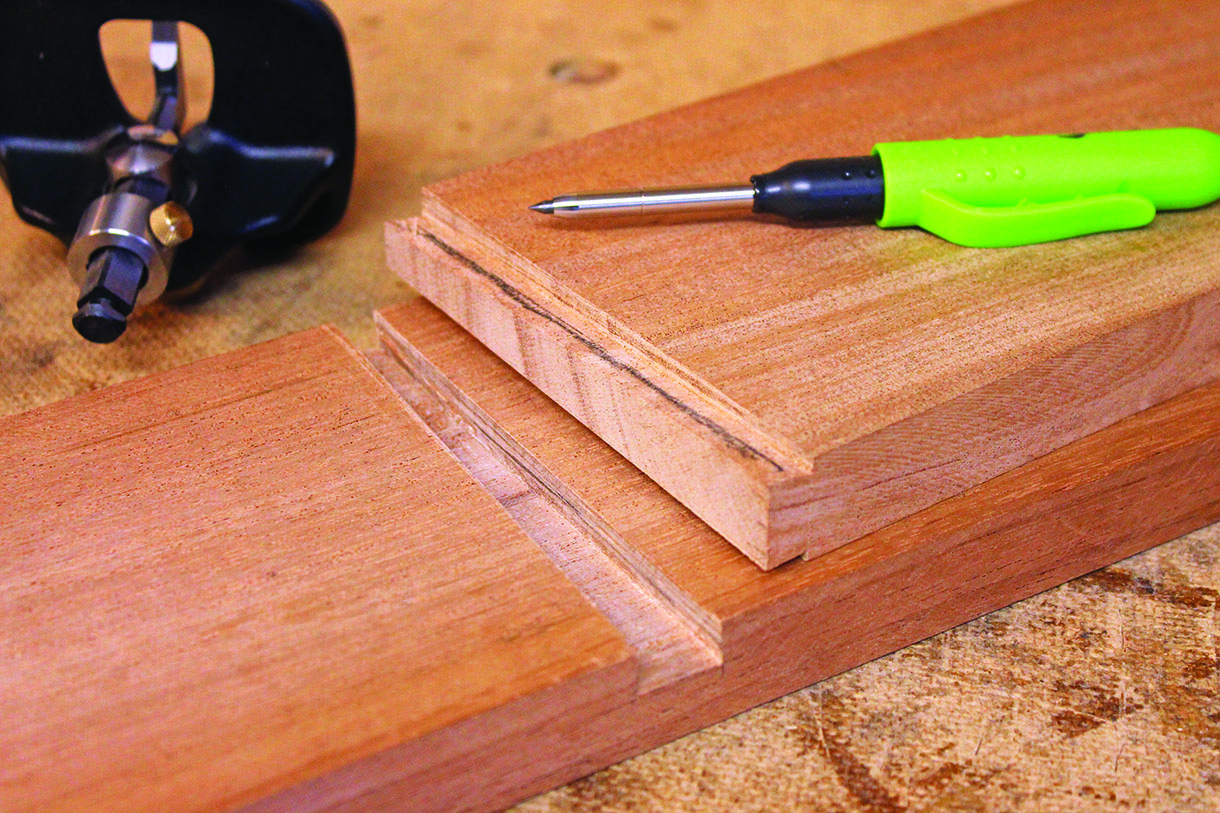 Also known as a through housed dovetail joint, a sliding dovetail joint is a strong, mechanically locking way of joining boards cross-grain. We can find many examples of it in furniture construction, such as drawer dividers, bookcase shelves, legs on a tripod or a pedestal table and even breadboard ends on a table top. Sliding dovetailed keys are a little known but elegant way of keeping doors flat. It’s a joint that’s perfectly suited to machine woodworking or smaller power tools, such as a router. However, for a small number of joints working by hand may prove quicker.
Hand cutting this interlocking joint seems daunting, but as you’ll see, it requires no more tools or skills than those needed for cutting a through dovetail joint. The secret to success is meticulous marking out, sharp tools and a mirror trick.
A sliding dovetail joint can be straight (through housing), shouldered (stopped housing) or tapered (tapered housing). In a tapered dovetail, the lower cheek of the dovetail tongue is tapered along its length so the tongue at the back is thinner than at the front. The housing is a reverse image of the tongue. A tapered sliding dovetail may require a little more effort to cut, but this will be repaid when it’s time to assemble the joint. Tight fitting joints are what we strive for in good cabinetwork but a long tight joint can bind up before it’s in place making pre-assembly awkward and final assembly with glue impossible. A good tapered sliding dovetail will lock into place just before it reaches the limit of travel.

Plan for shrinkage
Even though the components are joined cross grain the direction of any seasonal movement will be the same, typically front to back. To ensure the front face of your components remain flush just apply glue to the front quarter of the housing allowing the back three quarters to expand and contract within the housing. Any movement should now only show at the back of the cabinet or worktop. 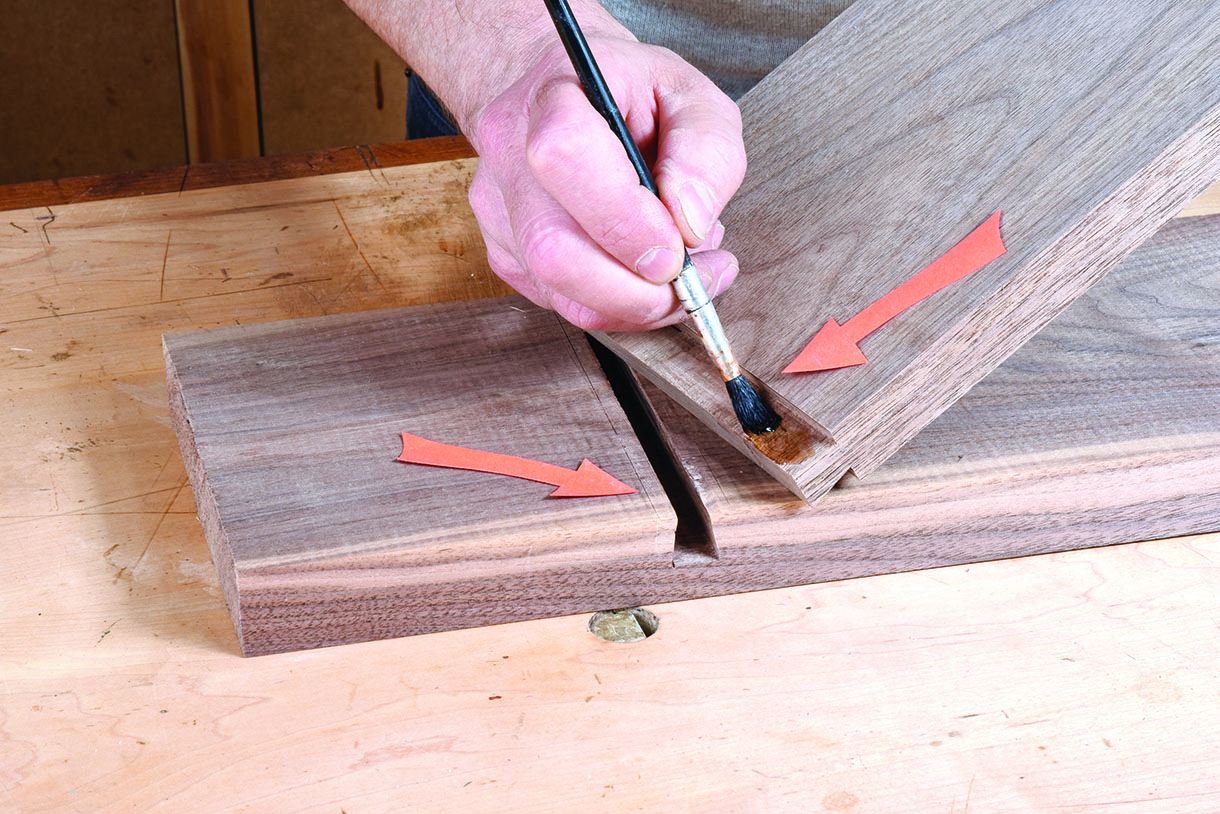 A tight joint will hold the parts together, glue keeps them aligned at one end

Joinery for the rack
I used mahogany from the scrap bin to build a rack with a dovetailed shelf and prepared the stock reasonably thick as the proportions on sliding dovetail joinery are not suitable for thin stock. I cut all the pieces to final sizes, but you can cut the tail board slightly over-length and cut it to length after final fitting.
Instead of a dovetail joint, I chose a single rebate joint for the carcass, because I liked how the ends of all the horizontal pieces lined up in a straight line on the sides. I made the rebates with a skew rebate plane. For the rebating, I set the width of cut to the thickness of the stock and the depth to about half of the thickness.

Marking the tail board
If you’re a ‘tails first’ dovetailer for the majority of your work like me, you’re used to cutting your pins to fit your tails. A ‘pins first’ dovetailer will do the opposite. This is one of those occasions where for no reason that I can think of I change allegiance and cut the tapered pin first although this will nearly always be referred to as the dovetail.
In the first layout step, I set the marking gauge to the same depth of the rebate and scribe the shoulder lines around the tail end. I laid out the tail slopes on both edges and then marked out the taper lines on the end grain. Do the same marking out for the tail on the other end of the board. A marking knife can sometimes track the direction of the grain so I prefer to use a fine mechanical pencil. Even if the lead breaks the replacement tip will be of the same size unlike a captive lead pencil that changes thickness while
in use. A uniform line thickness will help with your sawing later. 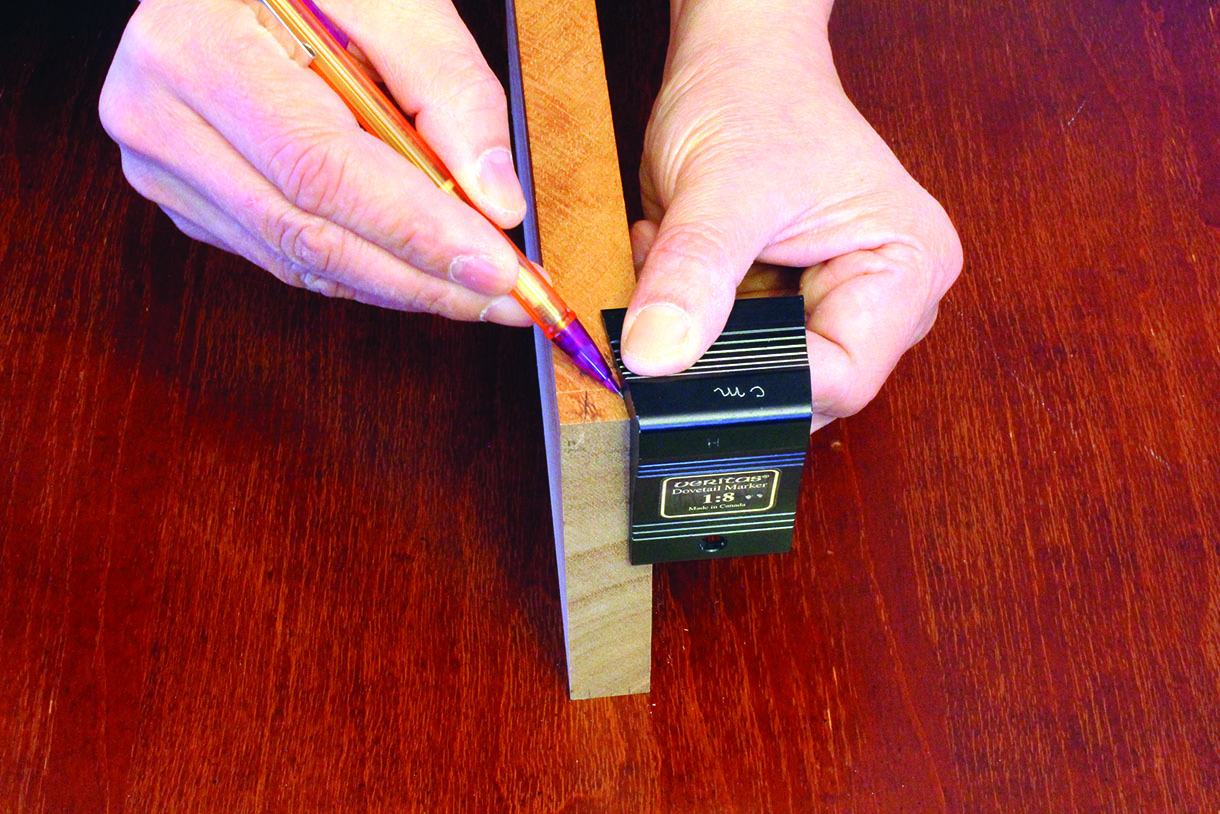 On the edge, mark out the slopes using a dovetail marker or a sliding bevel 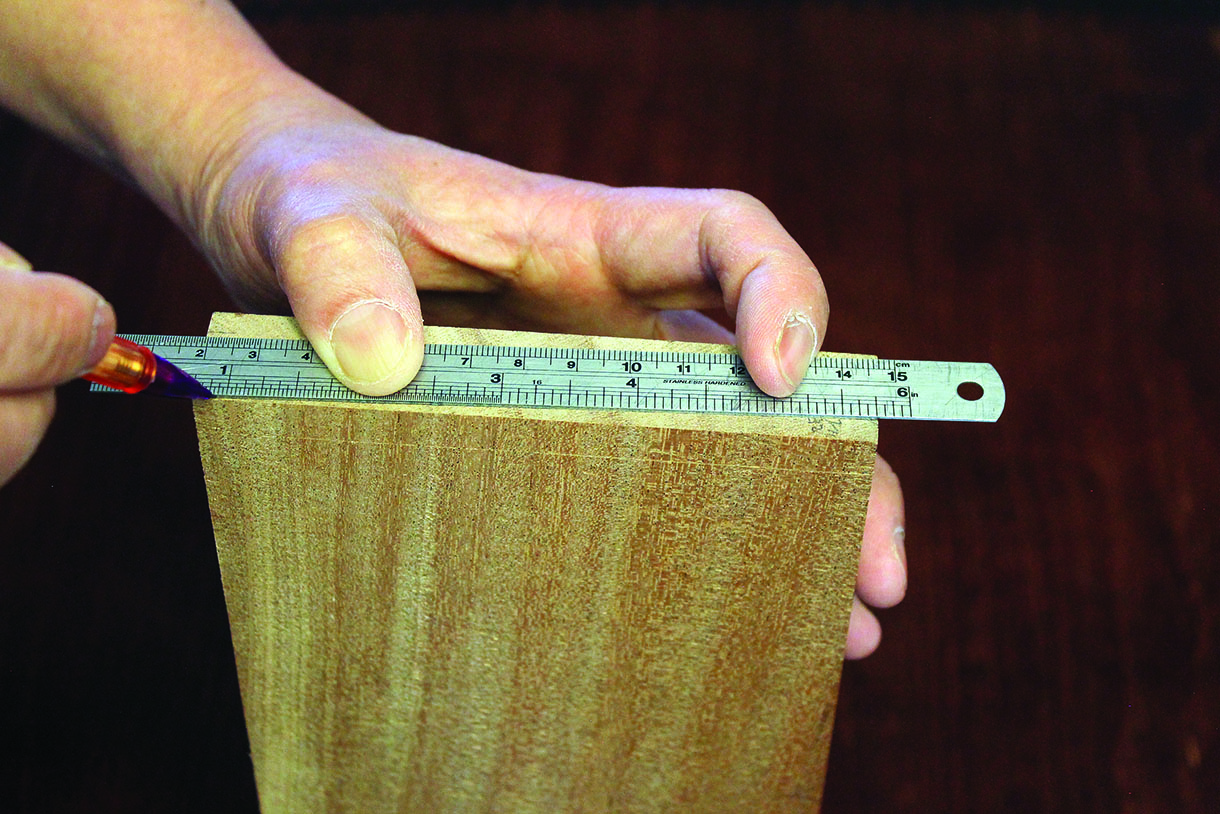 Cutting the tapered tails
Some woodworkers cut the dovetail tongues or keys with a dovetail plane, or just with a chisel and an angled block. A fine-tooth saw, a pair of well-honed chisels and a small mirror (yes, a mirror) are my tools of choice. 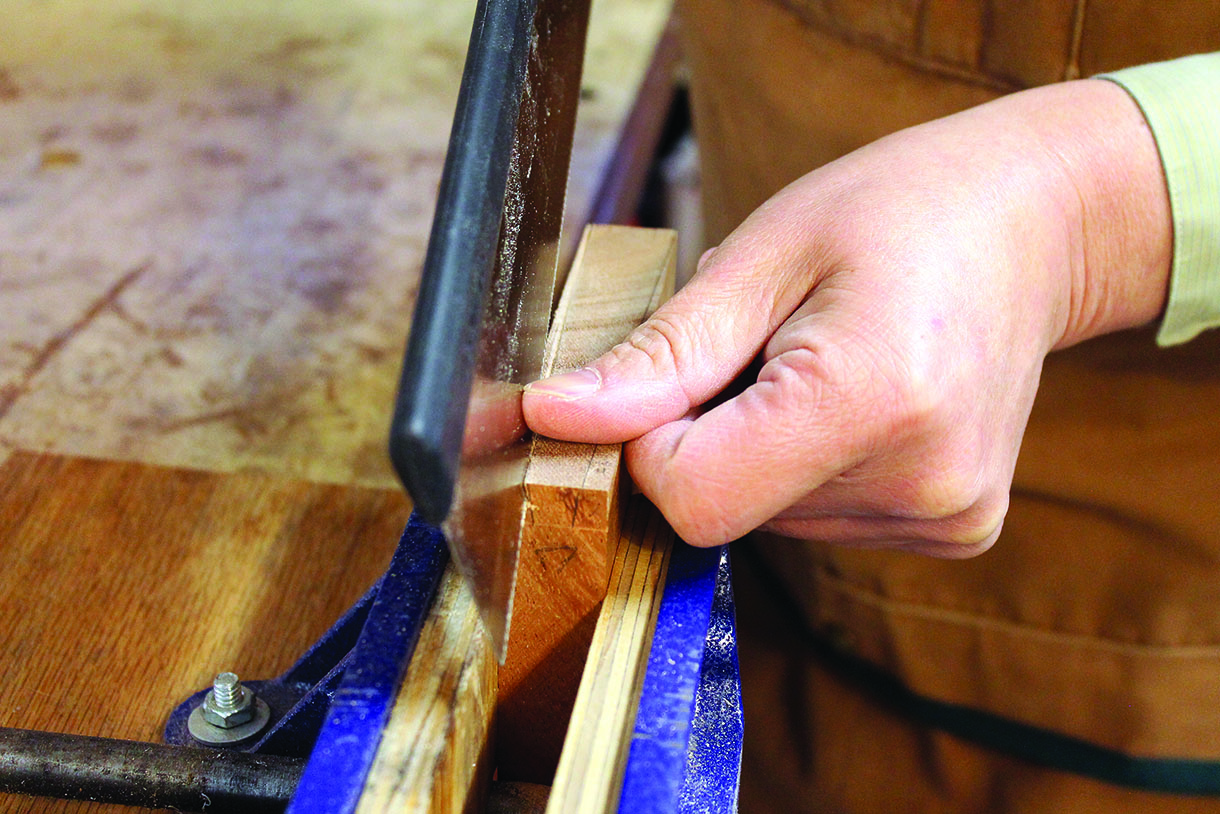 Make the angled cuts on the slope lines, stopping at the gauge line

Cutting a tapered tail is like cutting an angled tenon. After cramping the workpiece in the vice, sight along two layout lines (the taper line running along on the endgrain and the tail slope on the near edge). Angle your saw, and proceed to cut with the heel of the saw down and the toe in the air down on the first slope line, stopping just short of the shoulder line. Repeat the same procedure on the other three slope lines
so you have two sets of kerfs on either side of the dovetail that don’t quite meet in the middle. 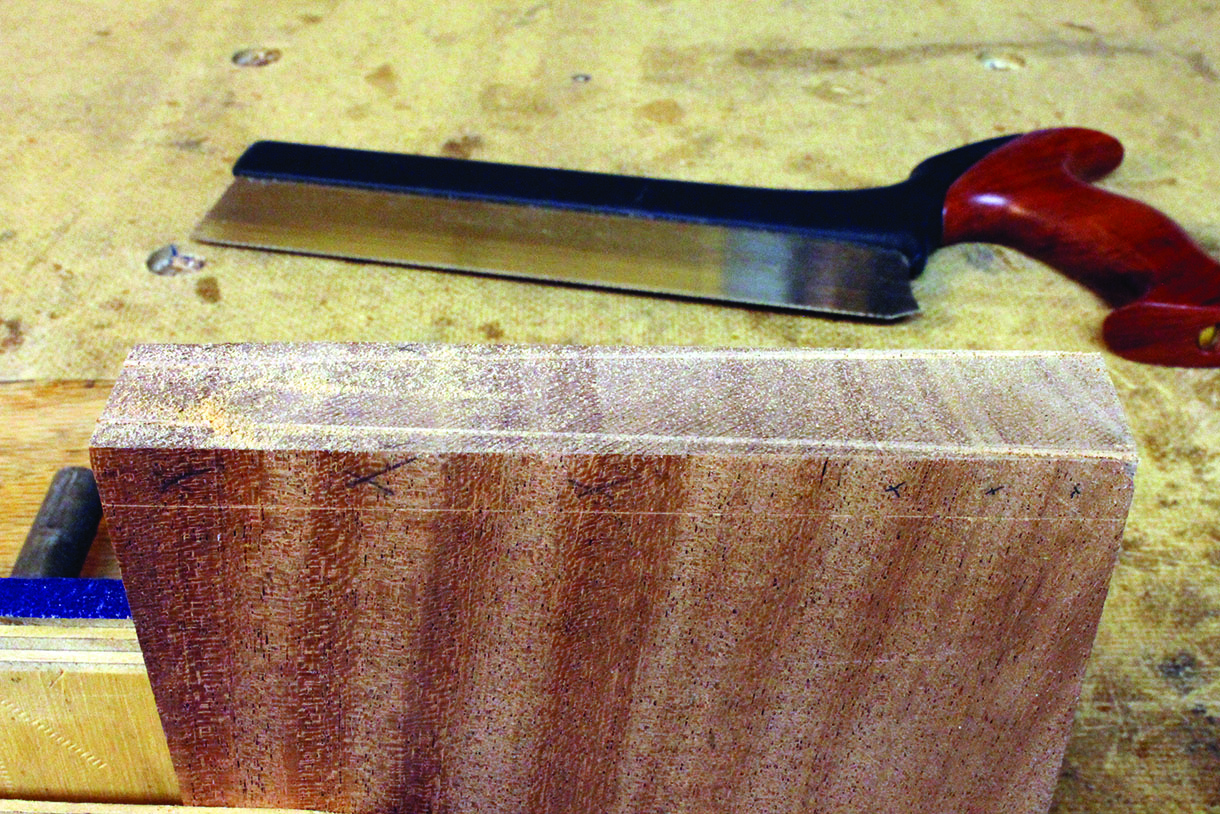 The shallow guide kerfs are no deeper than the saw teeth 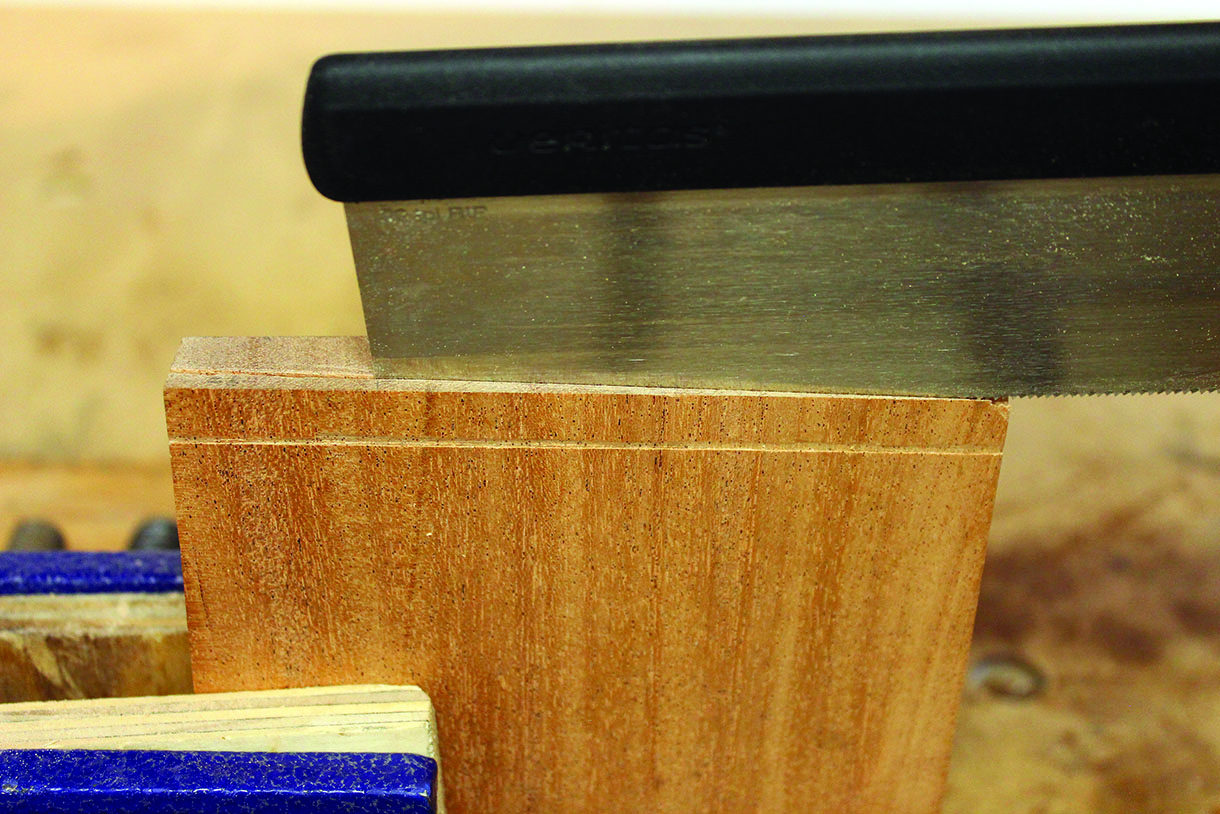 Given the tendency to arc the bottom of the kerf, I made a few more saw strokes in the middle part to remove that high bit

Next, guided by the angled cuts on the ends, make a guide kerf on the endgrain along the taper lines. Then, tilt the rip saw on the guide kerf and, looking at the tail slope (you can think of these as mortise cheeks) saw down the taper line, stopping at the shoulder line. I have a way to make the angled cuts freehand without any guide blocks: place a mirror at the far end of the board so you can check your sawing against the slope
and adjust your angle of sawing on the fly. You’ll be amazed how well you can tilt and cut precisely with the help of a mirror.
After all the other taper cuts are done, it is time to cut off the waste on the face grain. First, cut a knife wall at the shoulder line, which serves as a square fence to guide the vertical sawing. To form a knife wall, you can make a series of shallow passes with a sharp chisel on the waste side of the shoulder line or use a knife to slice cut at the bottom of the gauge line.
To avoid overcutting, I put large and small X’s on the face grain to remind me where to make the shallow saw cuts. After sawing away the waste, I used a paring chisel to clean up the tongues. 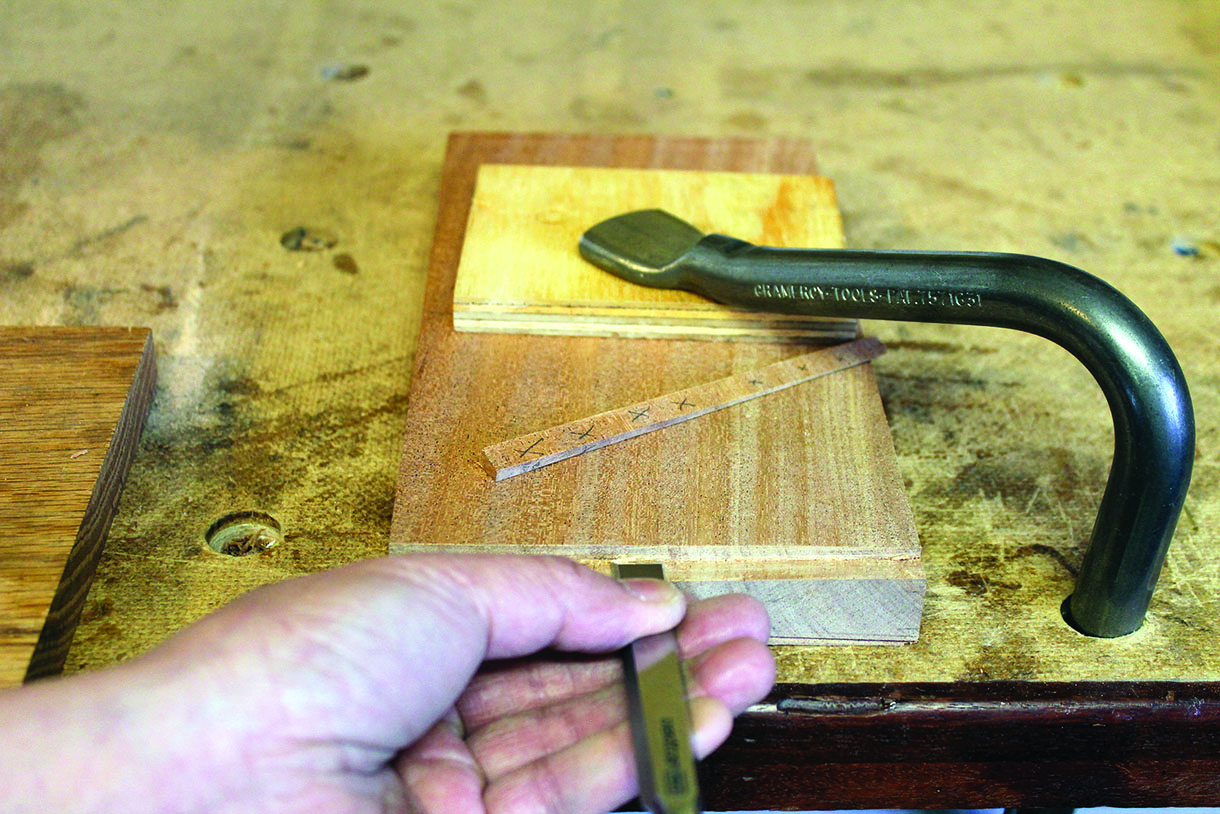 Pare away any saw waste on the cheek

Marking the housing board
The tapered housing on the tail board is an exact reverse image of the dovetail tongue. To transfer the profile, cramp the narrow dovetail end in position to the inside face of the adjacent board. With a square and a marking knife, transfer the width of the tongue with two marks on the inside edge of the adjacent board to locate the narrow part of the dovetail tongue. Do the same with the wide end of the tongue on the front face of the board and use a marking gauge to set the depth of the housing. Repeat these steps on the other end of the housing board to transfer the pattern of the wider dovetail tongue. If you are using a knife to complete the layout make shallow cuts as this will be the front face of your project. It may not be practical to plane the entire face of the piece to remove the knife marks. You are now ready to scribe the taper lines on the housing board across the width of the board. Do the same marking out on the other pin board. Don’t be tempted to use the first housing board to transfer the layout to the second. Remember your dovetail tongues have been cut by hand so they will not be identical. 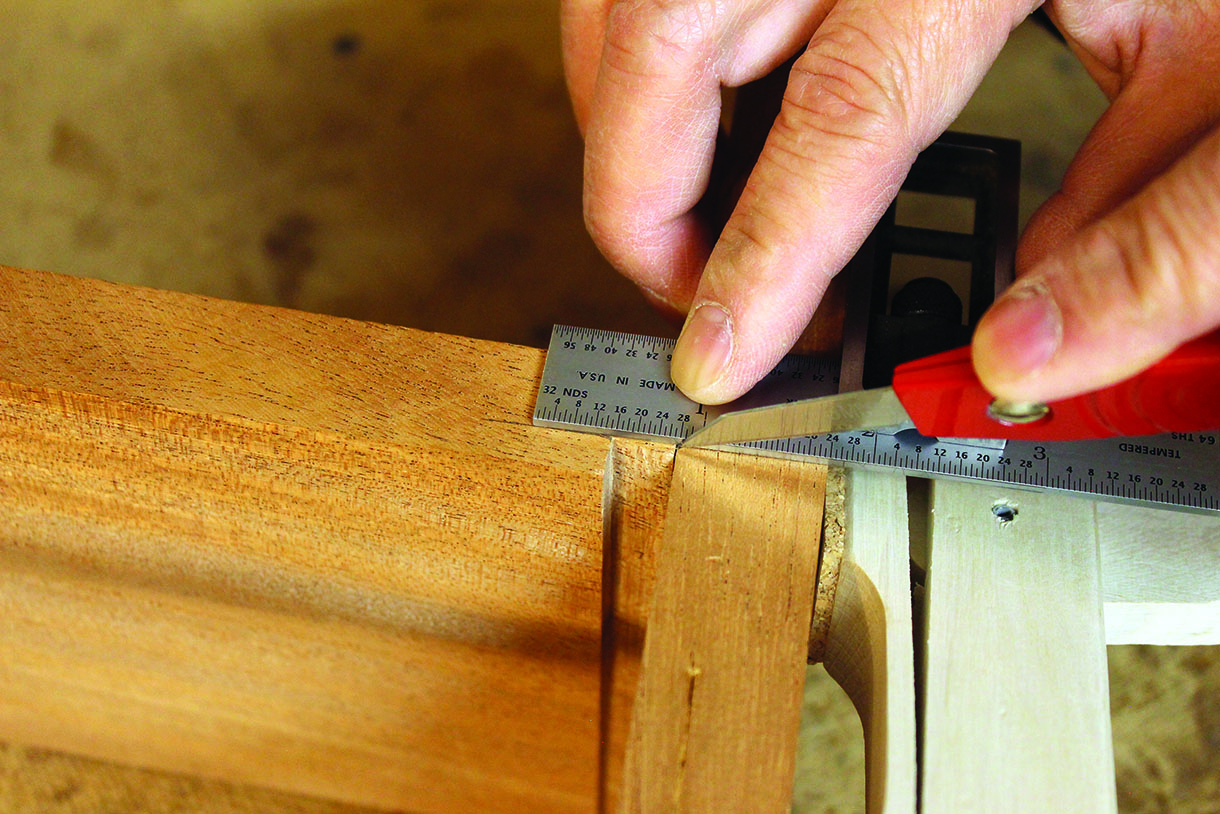 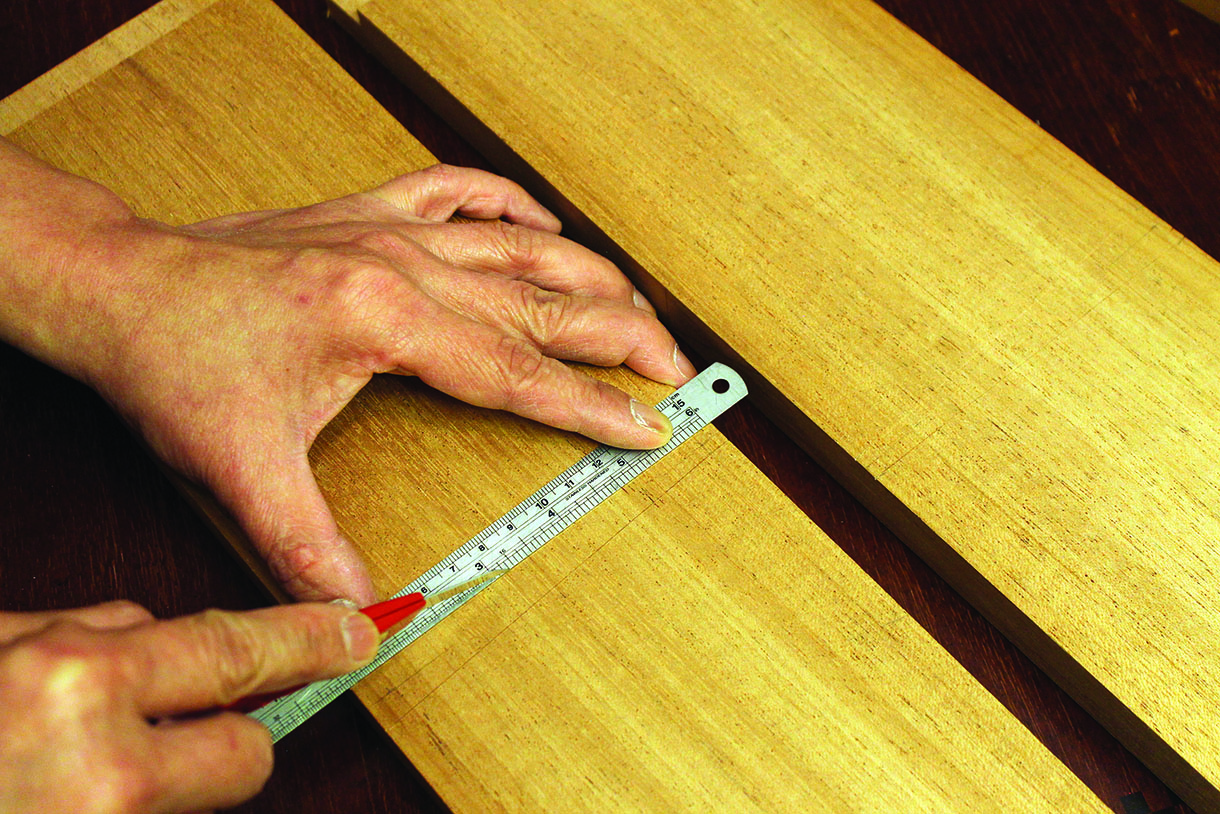 Cutting the tapered housing
As before, cut knife walls on the taper lines as a saw guide. Follow the housing slope marked on the edge and saw down on the waste sides of both taper lines. I used the mirror trick again to guide my sawing.
My mirror trick is superior to using a fixed angled block as it can be used on any angle of sawing. 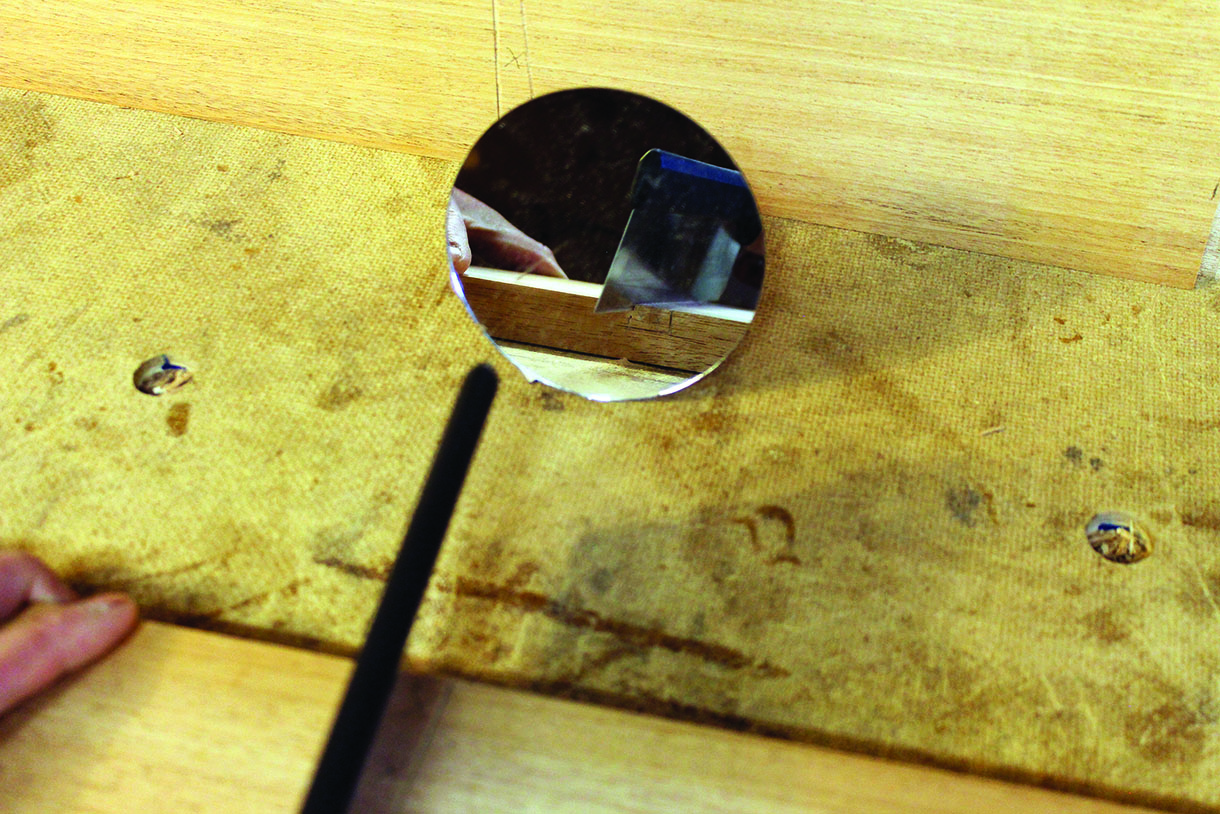 As I saw, my focus is on the mirror, maintaining or adjusting the tilt of the saw

After sawing, chisel away the bulk waste, working from both ends to create a dovetailed housing. A router plane is the best tool to level the depth and clean the bottom quickly, although careful paring with a chisel or two does the job, just as well. 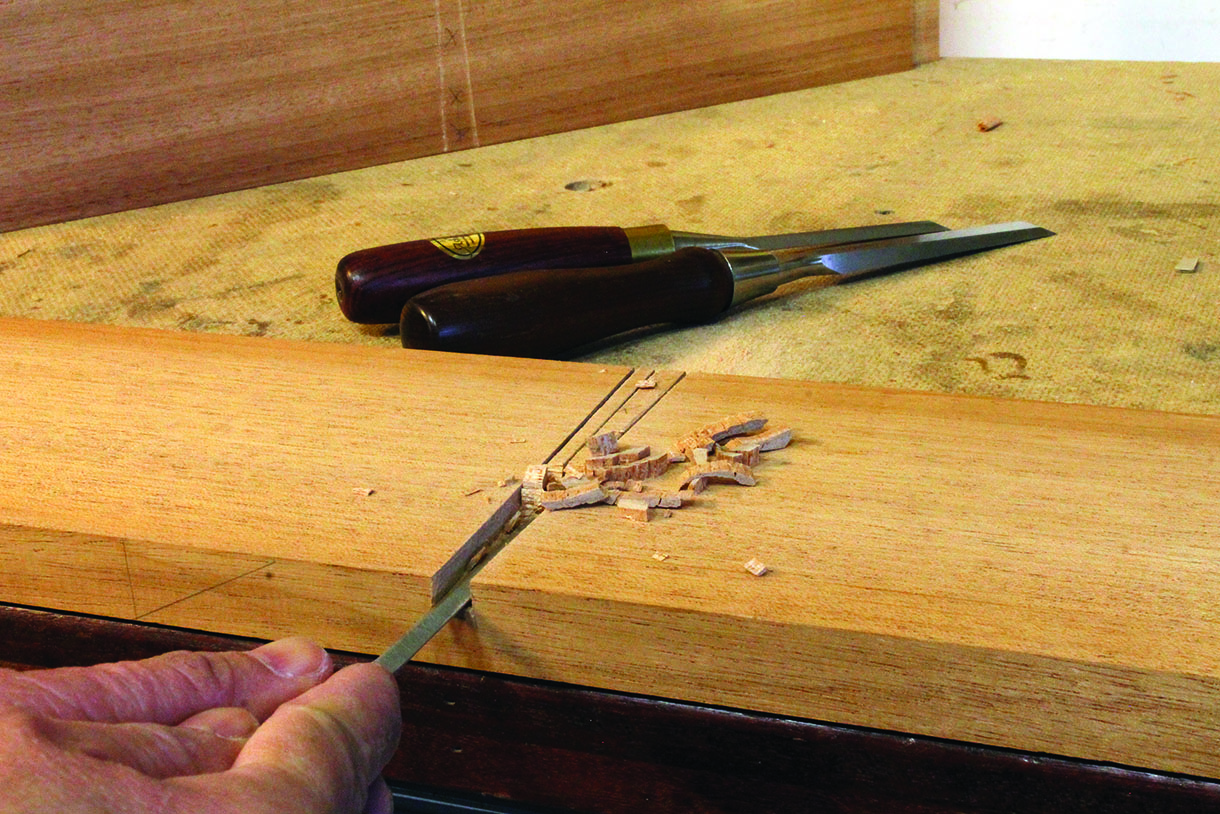 Dry fitting
In the fitting step, I made graphite marks on both sides of the dovetail tongue before tapping the joint together. I then removed the high spots in the housing with a chisel and a shoulder plane for those on the tongue. If you over-cut the joint and find it’s too loose, glue a piece of veneer along the edge of the tongue. When the glue has fully dried, carefully pare or plane the new joint to fit. 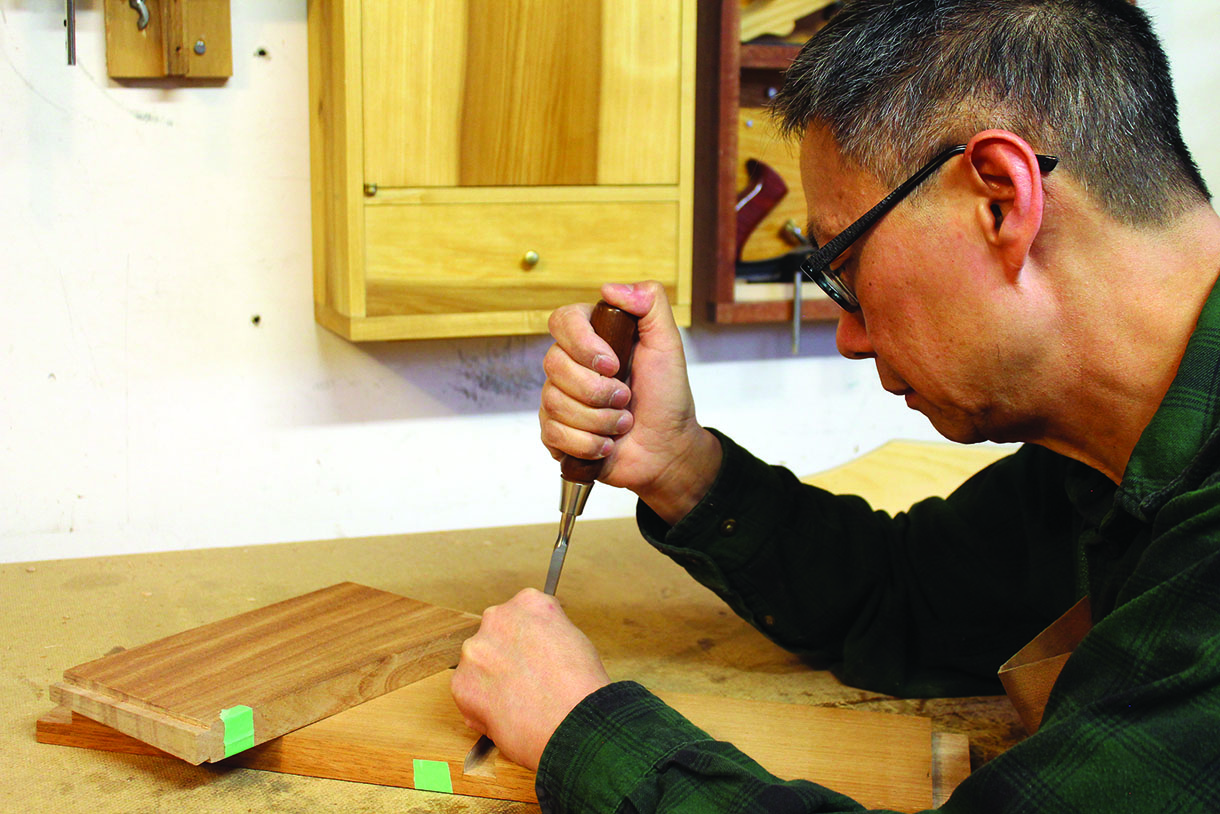 Final assembly
I broke down the dry fitting of this project into two steps. First, the rack without the dovetailed shelf, allowing me to check the squareness of the carcass and fix any problems with the top and bottom rebates. Then I installed the dovetailed shelf. This two-step approach avoids damaging either the tapered dovetail or the rebates and gives me a chance to correct any errors. 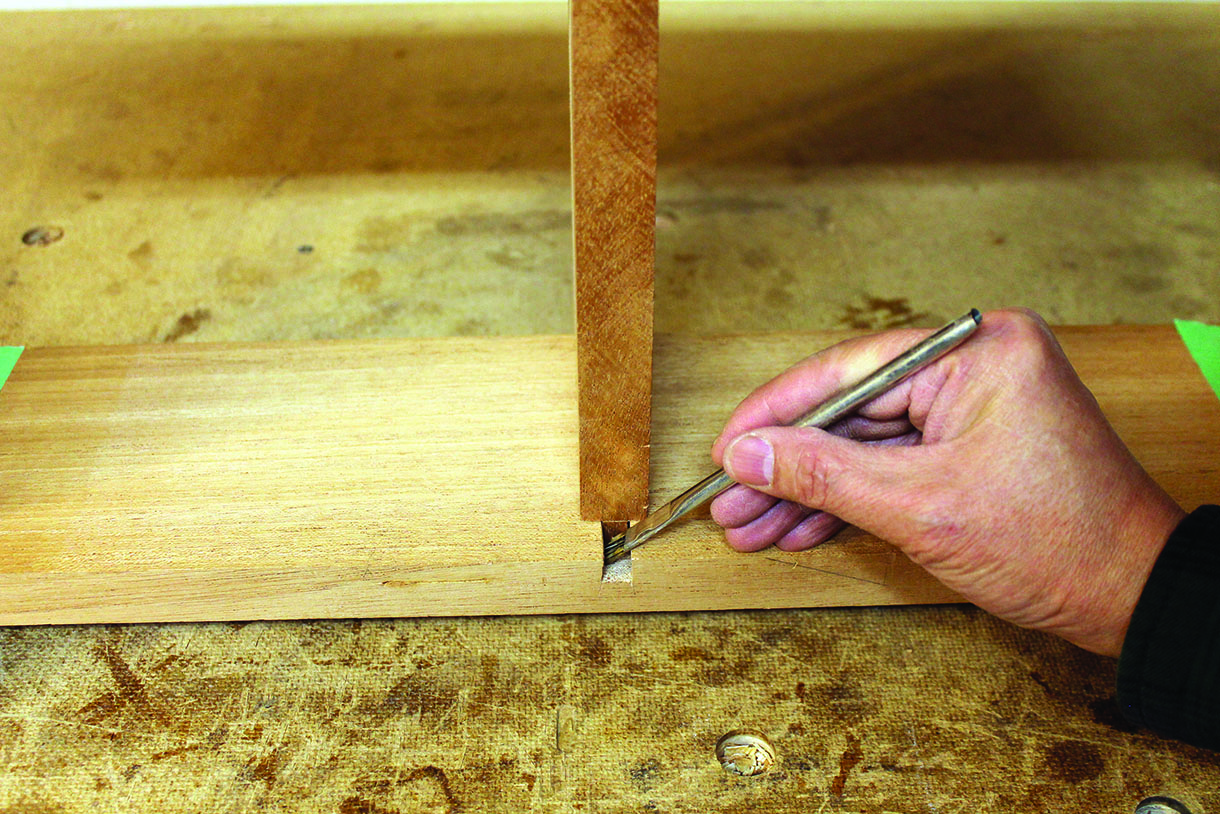 Apply glue only to the front end of the dovetail joint

There you have it. You can cut a sliding dovetail neatly without a guide block, a hard-to-find dovetail plane, or the use of a noisy and complex router set-up.