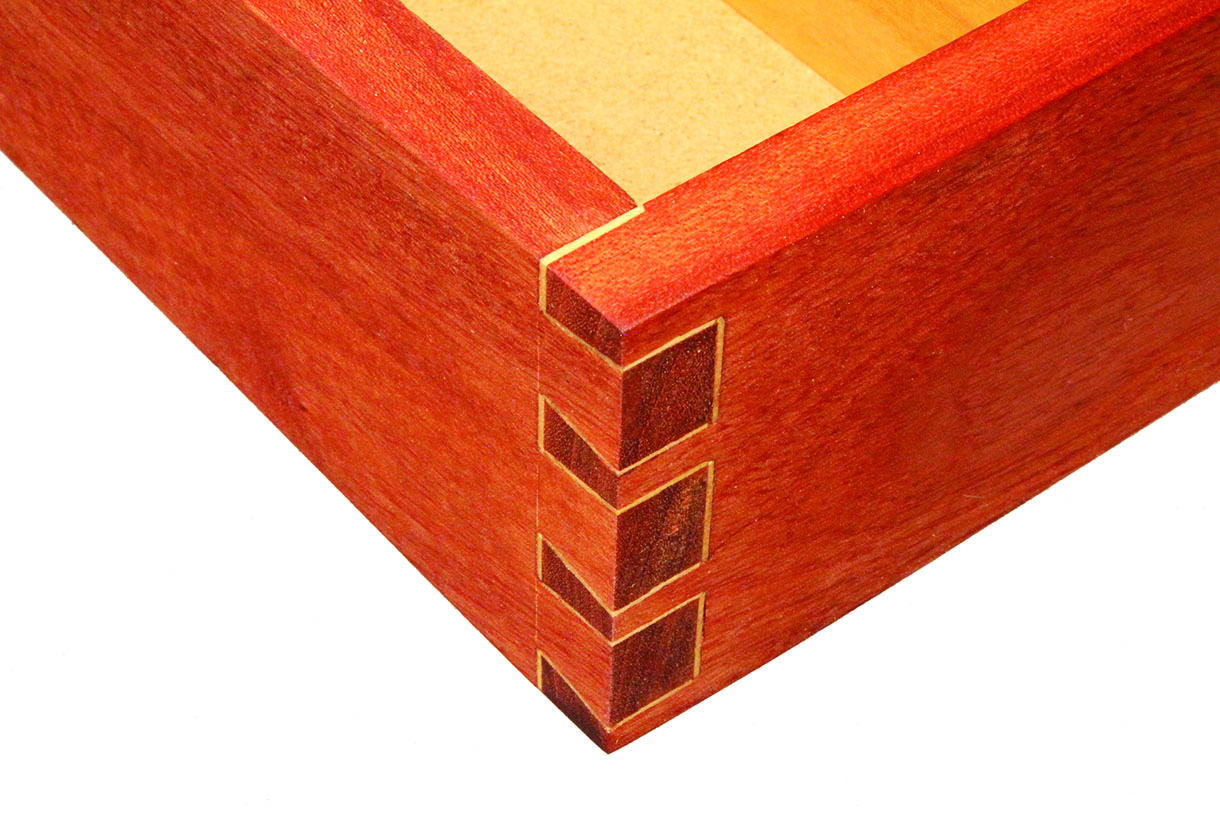 While this caddy may be small in size, it is not small in personality – the decorative dovetails make this tote
stand out from its envious peers. The dovetails are hand cut, not using any complex jig or machine set-up, as are all the other components: the grooves, stopped dados and handle. This is a utilitarian project that challenges your workmanship.
Other woodworkers have attempted to hand cut this kind of ‘inlaid’ or ‘double-cut’ dovetail, using techniques often as cumbersome as using a router and fancy jig. The method I used – Tage Frid’s technique – is easy to understand and is a lot like cutting a typical through dovetail. Also, if you’re interested in cutting stopped grooves and dados by hand, I’ll show you my techniques. 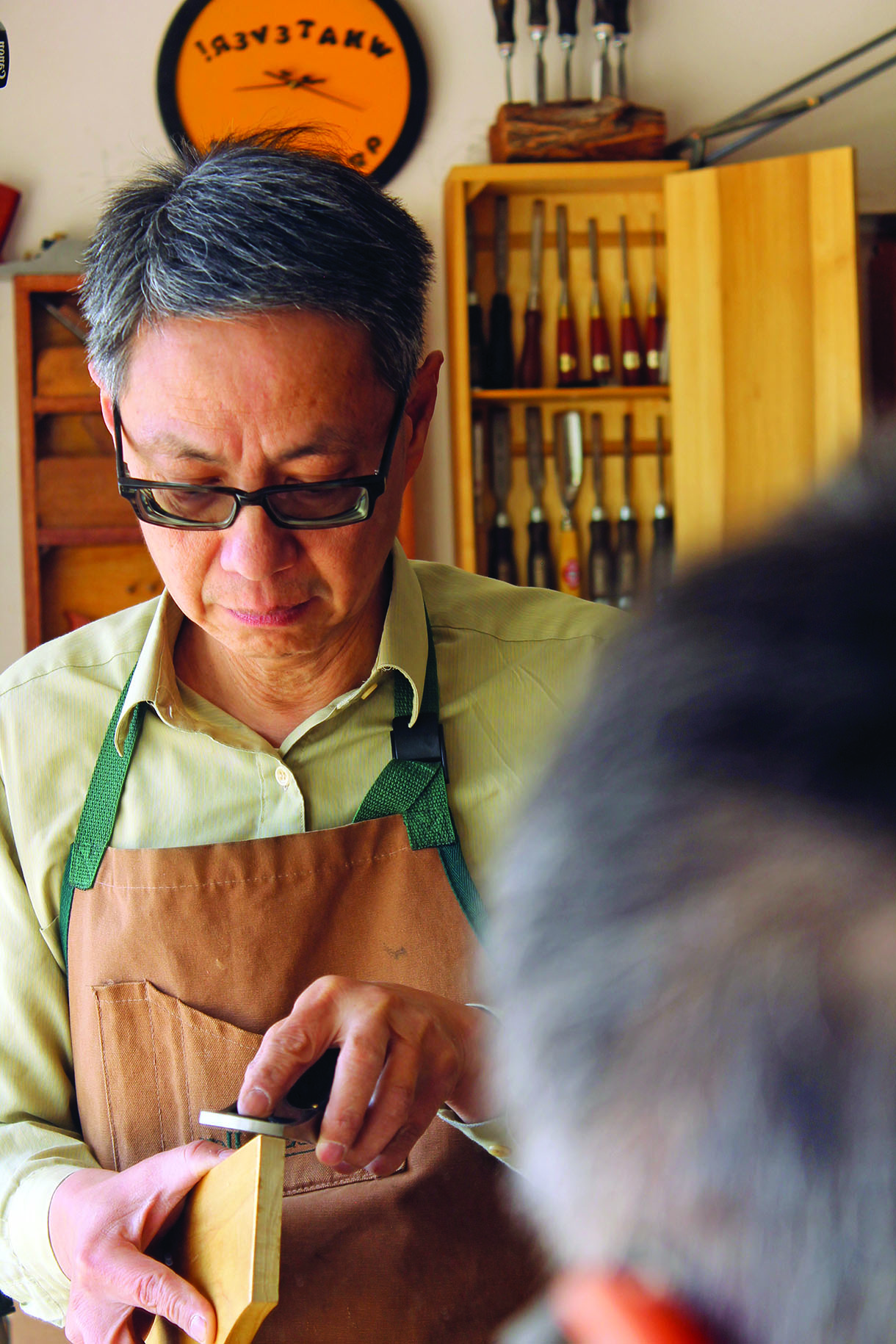 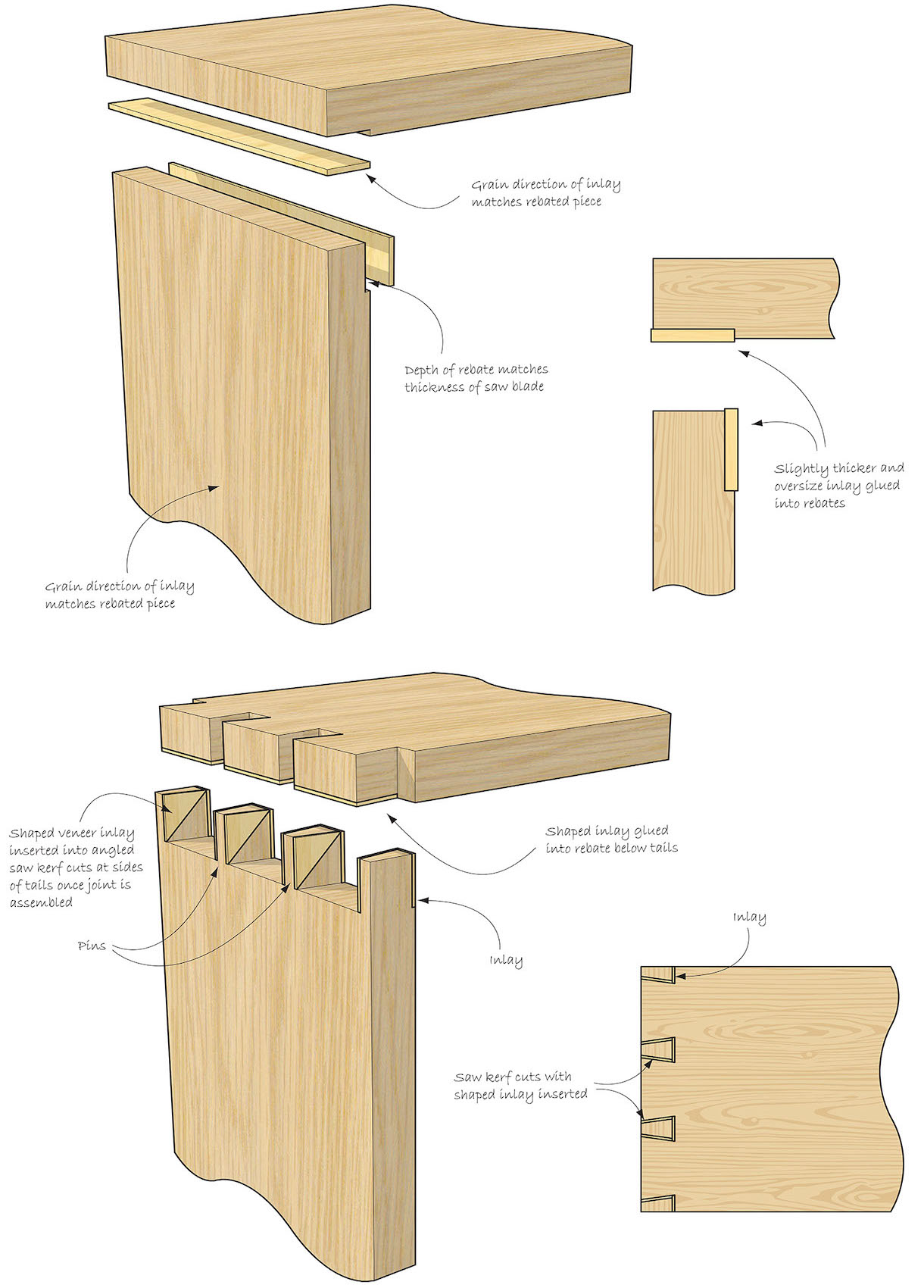 Stock selection
For this kind of outlined joint, as Frid called it, select woods of contrasting colours for the box and inlay for the best effect. My choices were sapele and poplar. I cut the stock for the box to size, but oversized the stock for the handle and inlay strips.
The inlay material is cut from a solid piece in much the same way as cutting the cheeks on a tenon. Before you lay out the dovetails, you have to decide if you want the tails marked on the sides or on the front and back pieces. For a hanging cabinet, the sides are typically the tail boards to take full advantage of the mechanical strength of the joint. Worth noting at this point, however, is that the best-known tool cabinet in the world and perhaps the most valuable – the Studley Tool Chest – does not follow this guideline and features pins cut on the sides.
For boxes like this caddy, I prefer to have less end grain displayed on the front, so I arranged the long pieces to be the tail boards. 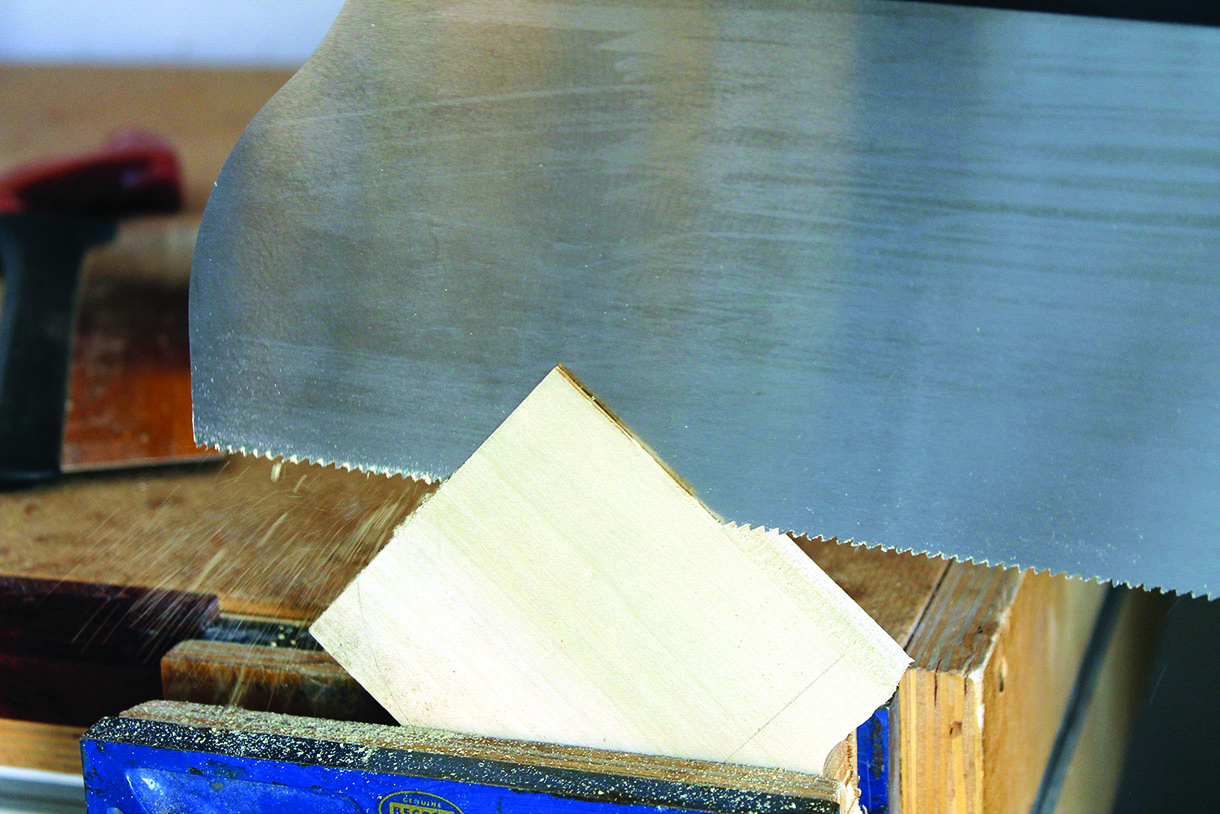 Prepare the dovetail boards
Tage Frid’s outlined dovetail is cut like a traditional through dovetail, but with a few extra steps to house the accent inlays. In short, rebates are cut on the inside faces of all the boards from the ends to the baselines and the accent inlays are glued into the rebates. After the tails and pins are cut and assembled, a diagonal kerf is then cut along the joint adjacent to the pins and the inlay  glued in place and trimmed flush.
So, the first step is to scribe the gauge lines on all the boards and cut the rebates.
A skew rebate plane is perfect for this but a shoulder plane used in conjunction with a batten for guidance is just as good. For a uniform appearance to all the inlay the depth of the rebate should be equal to the thickness of the saw blade you’ll use to cut your dovetails. Carry out a few test cuts first to establish this dimension as it occurs in timber as just measuring the saw blade can prove to be a little inaccurate.
When gluing the veneer inlay – which is slightly thicker and larger than the rebate – make sure the grain runs along the length of the board. After all the glue is set, trim the veneer flush with a smoother and chisel.
The boards are now ready for dovetailing in the usual way. 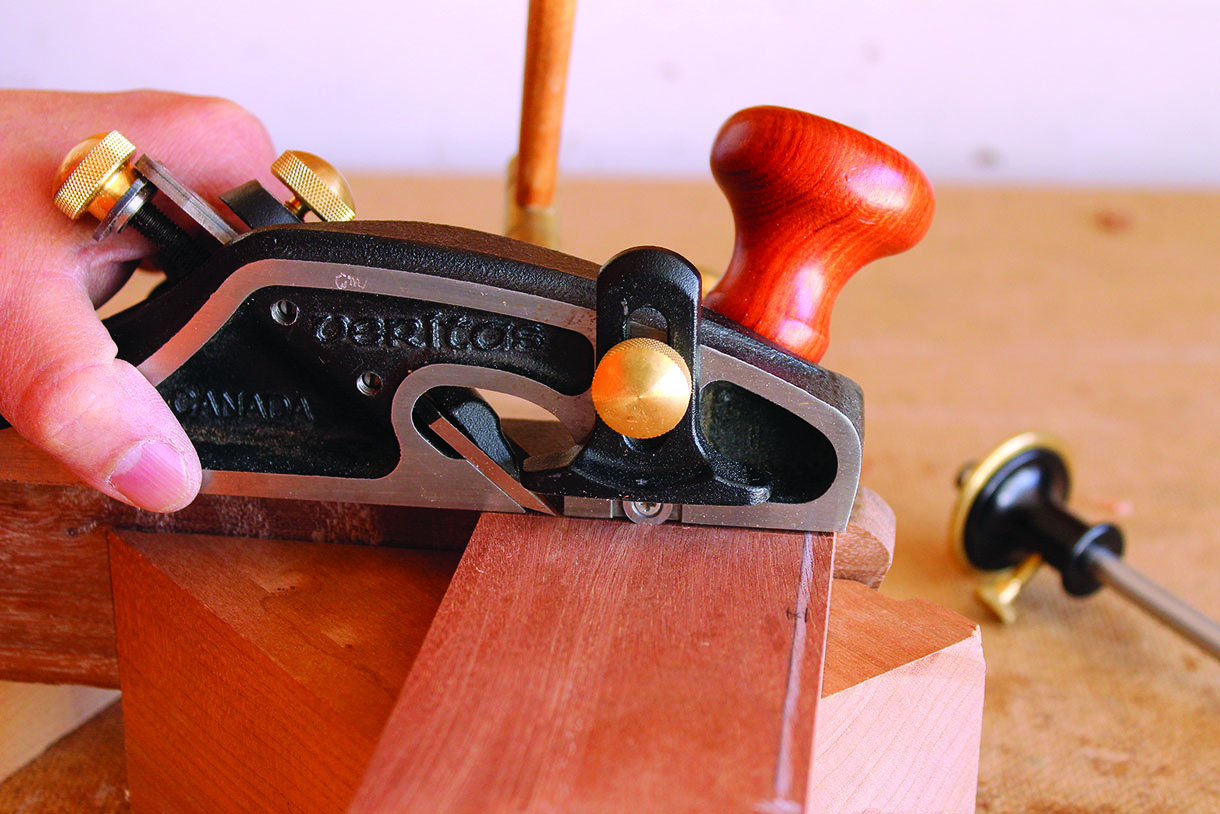 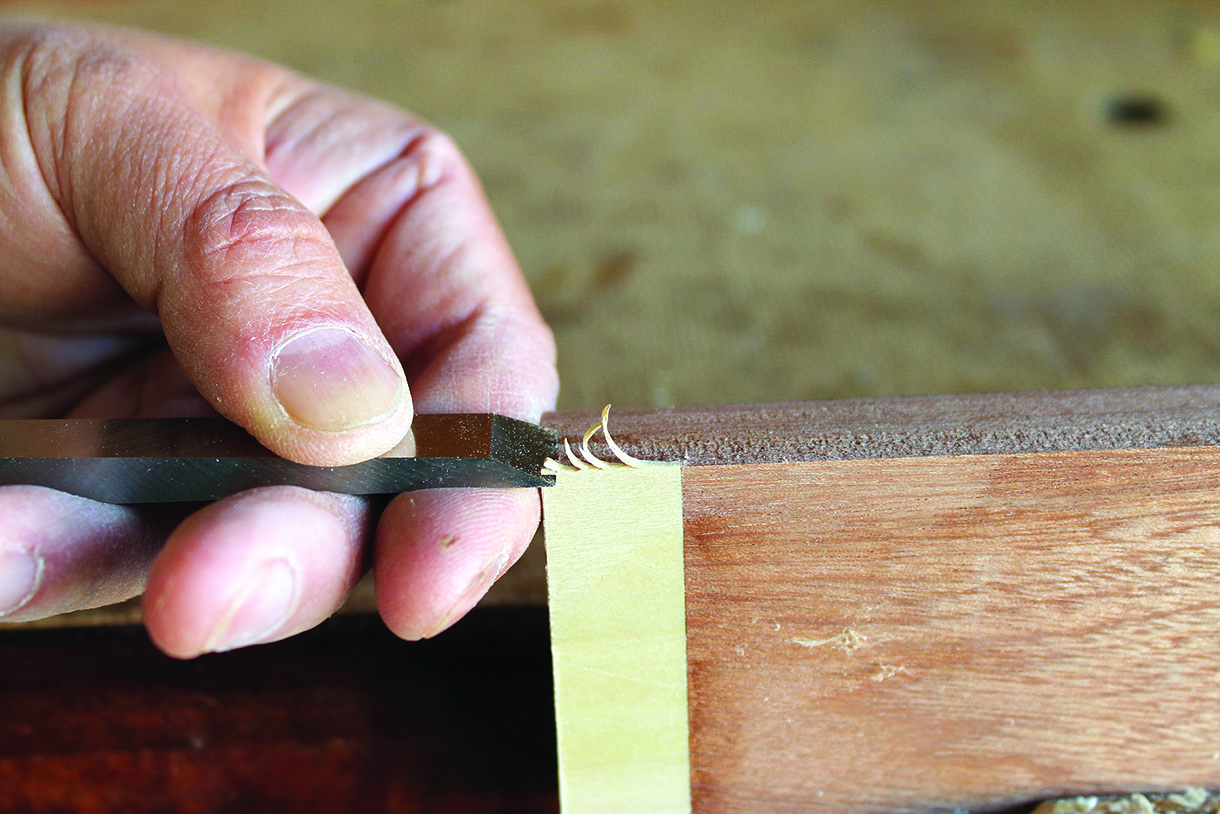 Trim the inlay at the edge , using a series of feather cuts to avoid splitting the wood with one heavy cut

Cut the through grooves
The bottom floats freely in grooves cut around the inside faces of the boards, so there are both through and stopped grooves to cut. One option is to cut all the grooves through to the ends and then plug the exposed groove holes afterwards. I prefer a fine craftsman approach and take the time to cut the stopped grooves, a skill that takes just a little practise to develop.
Through grooves are cut on the pin boards with the exposed holes covered by the tail boards when assembled. I use a plough plane set to take a very fine cut of 0.5mm or less to minimise tear-outs. Whenever possible always carry out a series of test cuts on an off-cut from the same project to verify a plane’s settings and also to give an indication of how it will behave on the actual components. 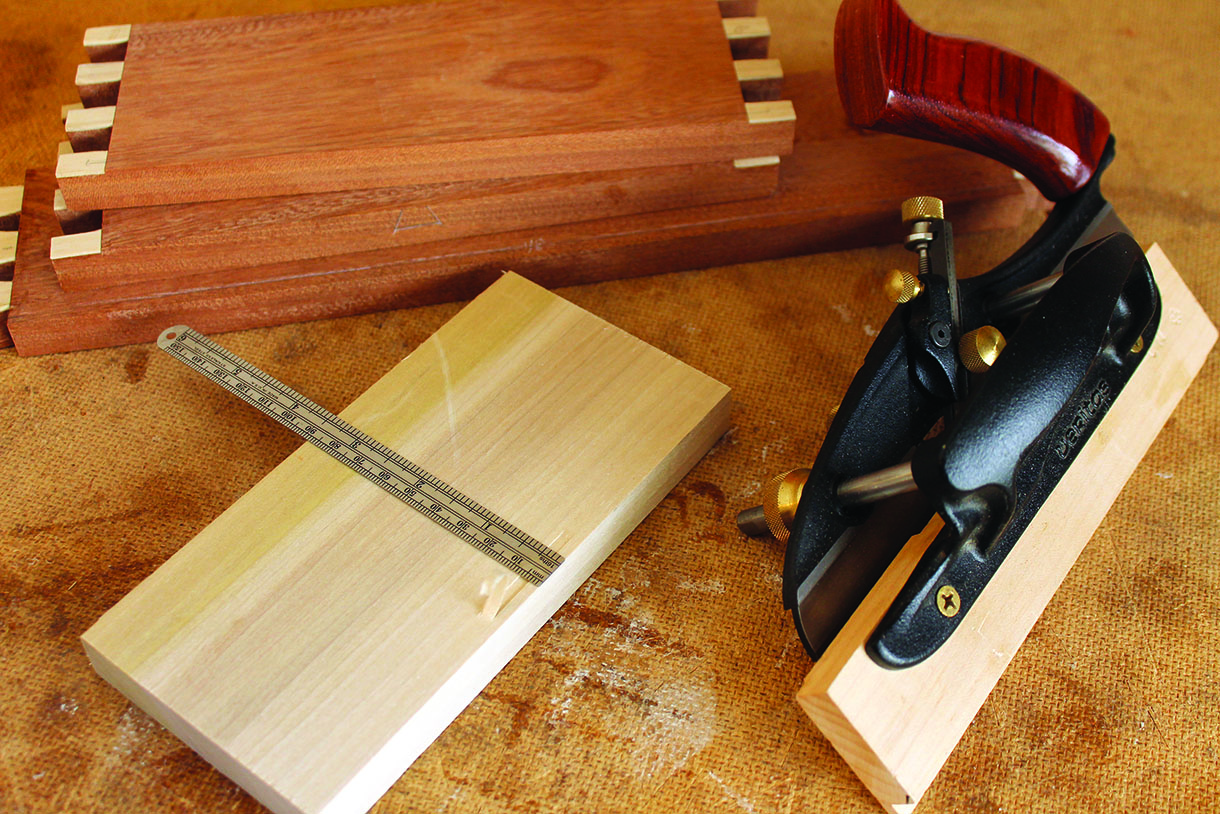 Cut the stopped grooves
Some woodworkers avoid hand-cut stopped grooves altogether because they find it time-consuming to chisel out the waste between the groove lines. I overcame the tedious chisel work by going with a plough plane for the grunt work, followed by some final clean-up with a chisel or router plane. Here are the basic steps:
1) Mark the ends of the grooves on the pin boards to a distance beyond the baseline that is equal or slightly more than the required depth of the groove
2) Make a light stopped cut at each end with the plough plane then continue to plough a shallow groove between the stopped cuts increasing the depth by advancing the blade with each pass
3) Keep ploughing and adjusting the depth of cut until the plane’s depth stop prevents any further cutting. The blade projection should be the same or at least close to that of the depth gauge
4) Remove any uncut waste at the ends with a chisel or a router plane.

You’ll find it more efficient if you work the boards in matched pairs with a single cutter setting for each pass before adjusting the depth and moving on to the next setting.

Prepare to repair
Some timbers are more awkward to work than others especially close to the edge, so if you encounter breakout or a fracture to the wall of the groove follow these steps to make the necessary repairs.
• Clean up the break-out to form a rectangular opening on the edge
• Glue an oversized strip to the groove and break-out area
• Plane the strip flush and cut a new groove on the short patch. 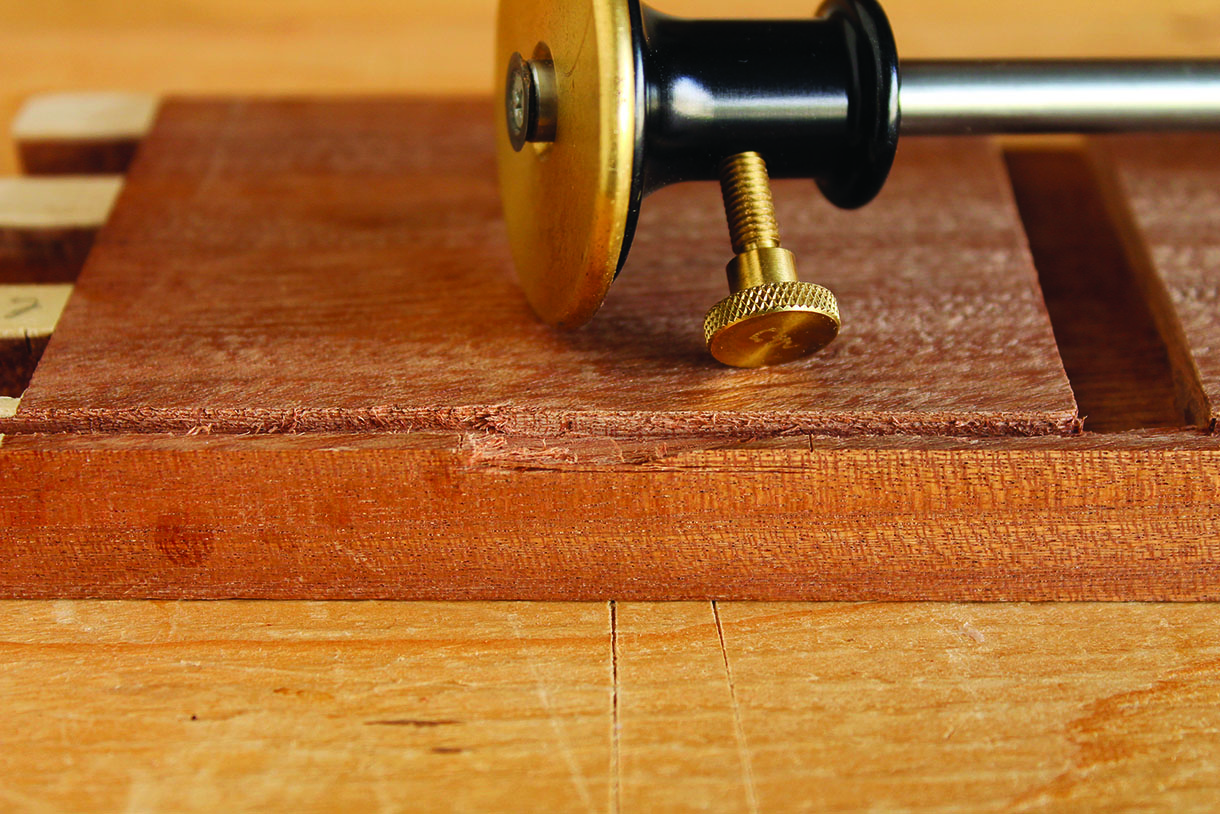 Score the baseline for the cavity and chisel out the waste 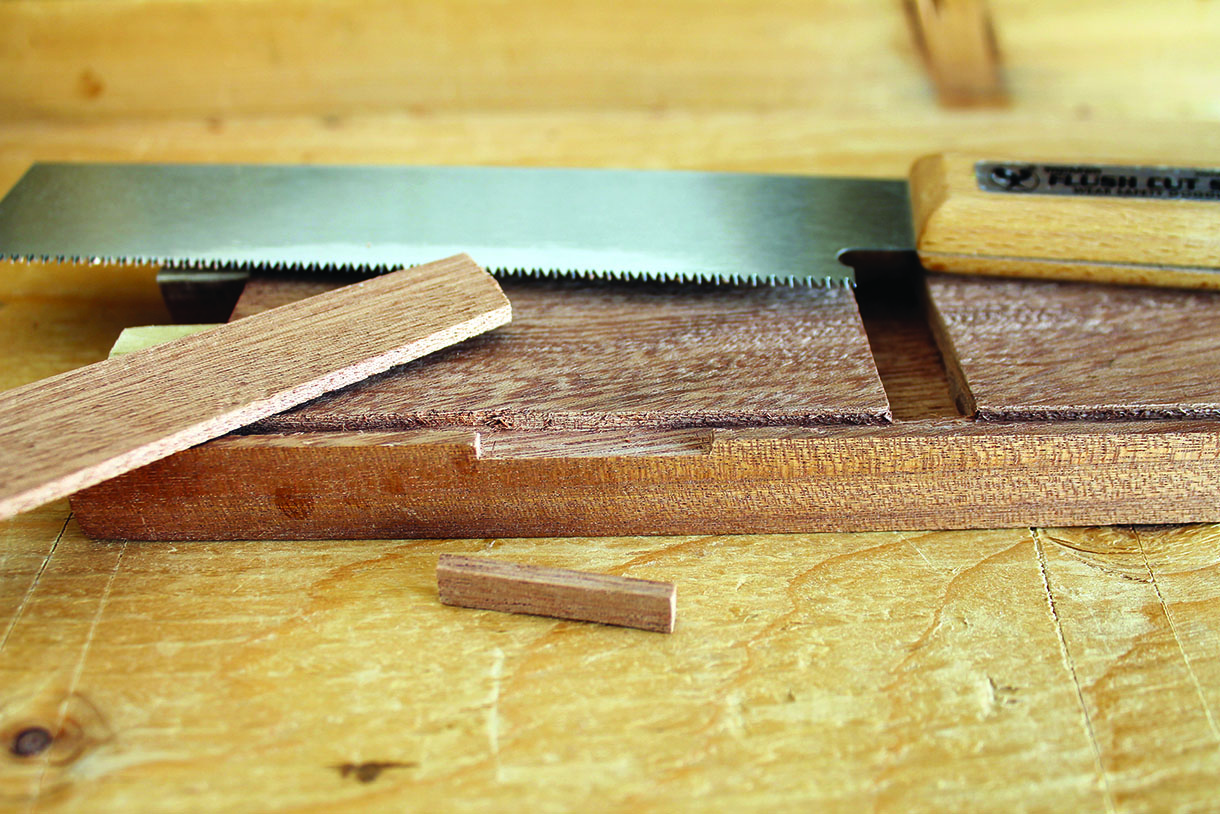 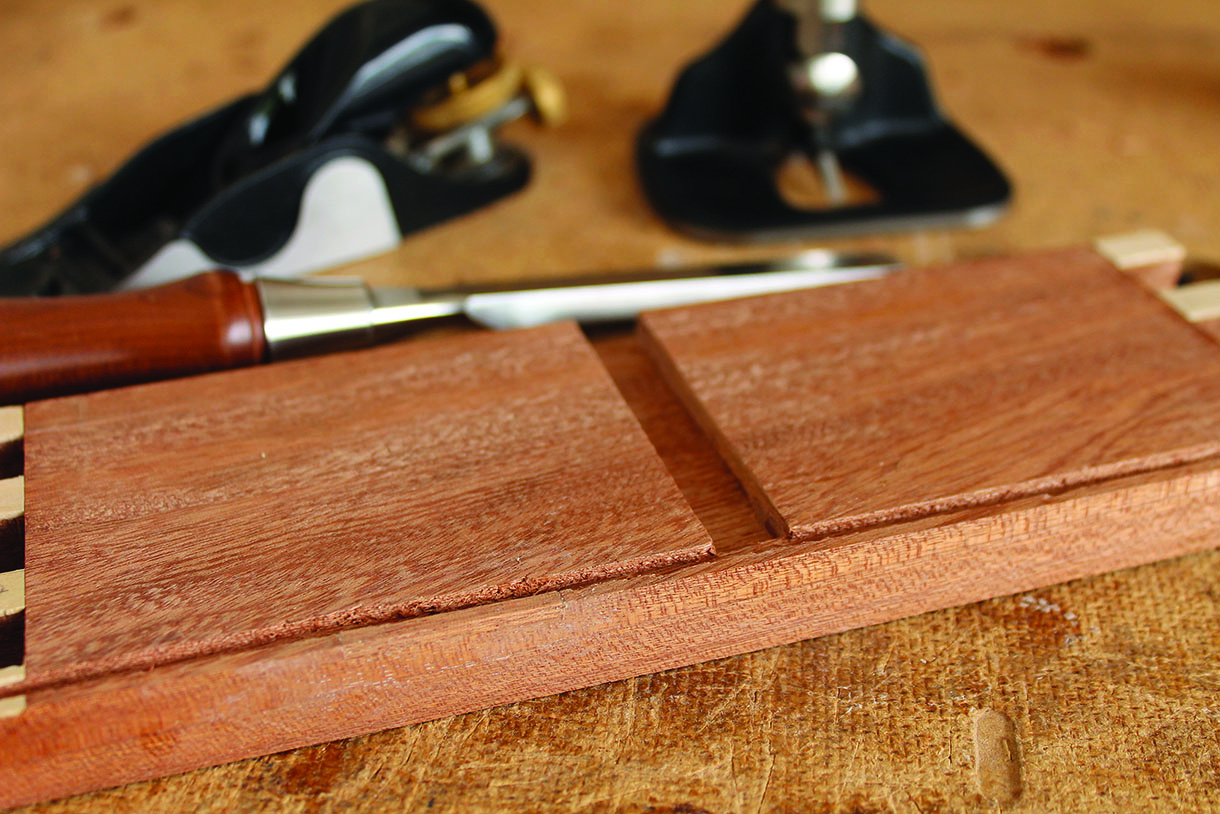 Cut the stopped housing dados
The handle fits into housing dados on the sides. I chose stopped housing dados over through dados, even though the other open ends are on the bottom. For a perfect-fit housing dado joint, I prefer the cutting method made popular by British author and teacher Paul Sellers:
1) Knife one of the lines – not both – for the dado on the board, up to the stopped groove and chisel a vertical trough along the line as a guide for the saw
2) Mark the dado’s depth on the end and saw down the shoulder line to depth. The stopped groove acts as a recess, allowing the end of the saw to emerge when sawing the shoulder. If you cut the stopped dados before the grooves, chop a notch against the stop on the dado because you can’t saw across the board
3) Chisel away the waste up to about the centre line of the dado
4) Place the handle in the dado to mark the width and scribe the second line
5) Chisel the trough and saw down the shoulder line
6) Remove the bulk of the waste and pare the bottom clean with a chisel or router plane. 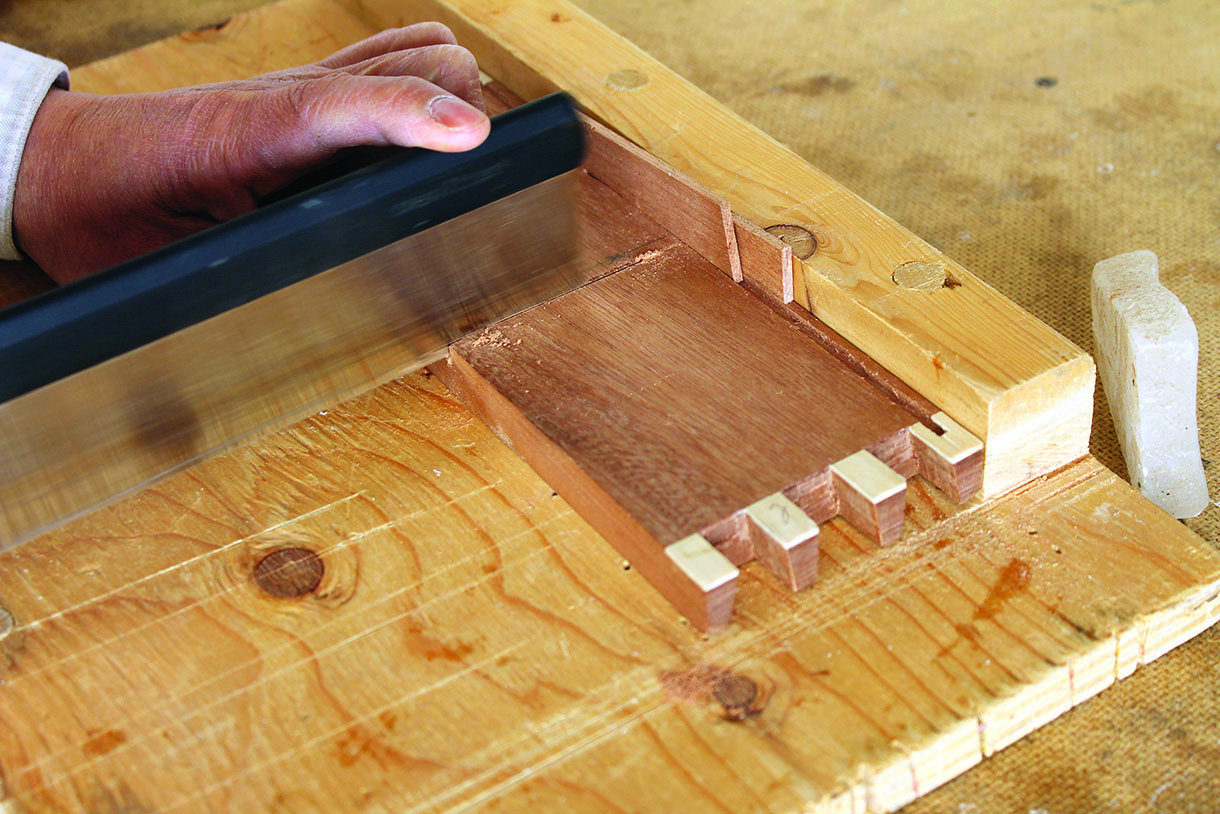 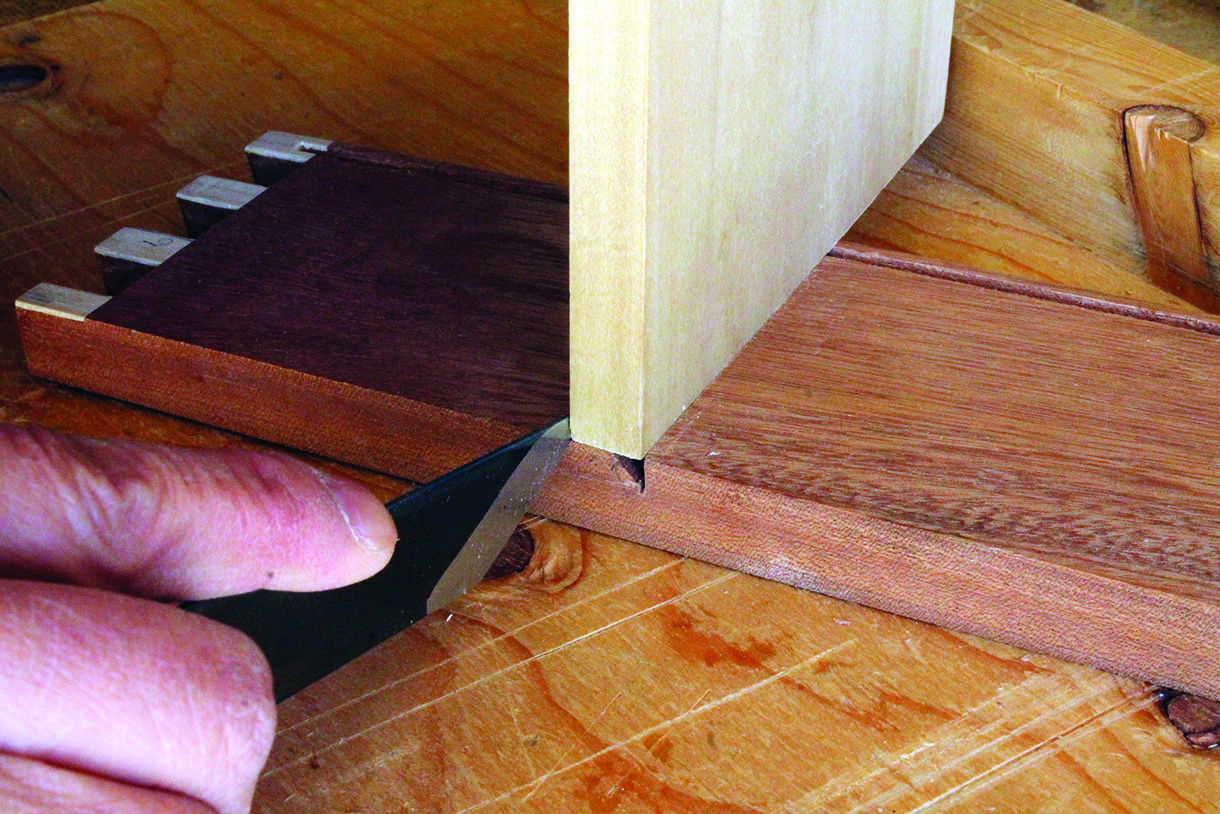 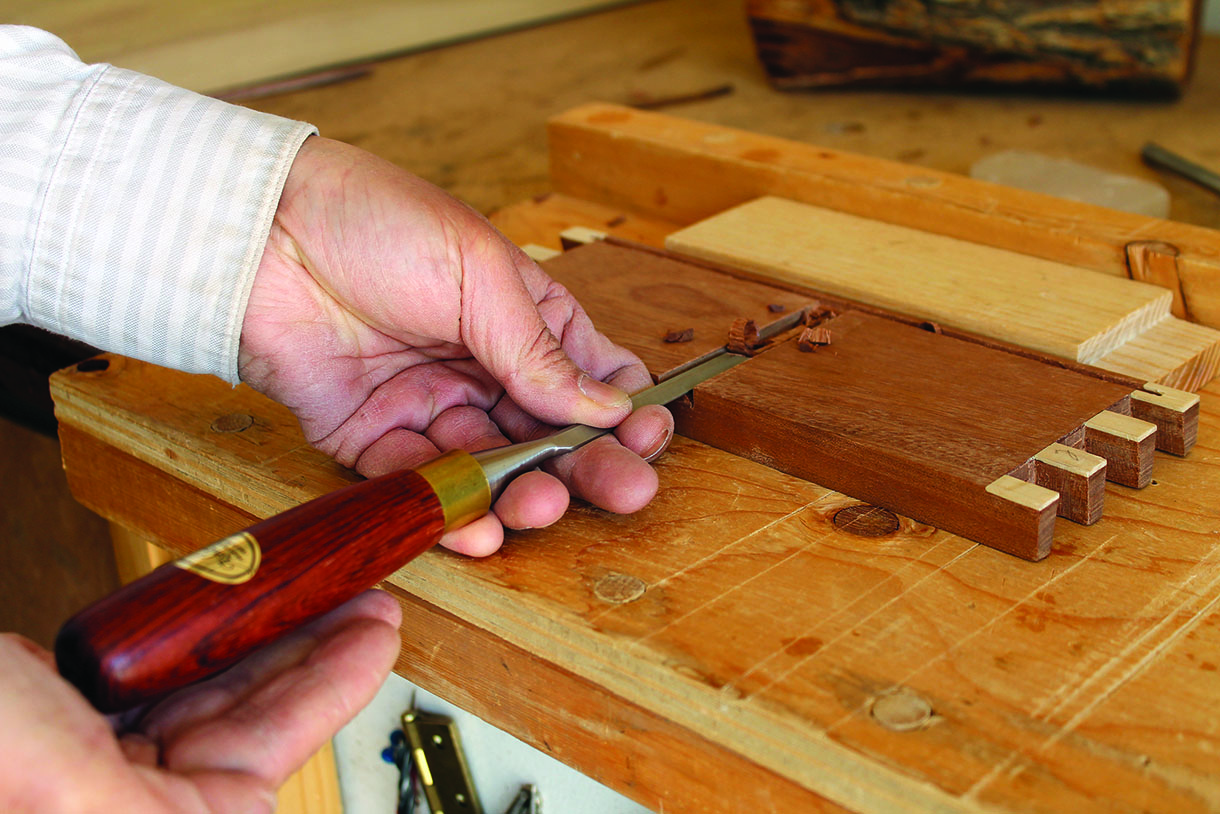 Cut out the handle
Most handled totes of this kind have an angled shape with a round handle cut-out. I settled on a curved edge profile to complement the round opening. After boring the end holes, cut out the opening with a coping saw, soften the corners with a rasp and then finish with a suitable abrasive. Next, mark out the outer profile and repeat the process cleaning up the edge with a spokeshave. Make sure not to round over the ends that are designed to fit into the dados.

Complete the outlined joints
I cut the bottom to size and chamfered its edges slightly to ease assembly, a trick that works well when all your joinery work is precise and tight. The assembly is done in two rounds after dry fitting everything. In the first round, glue up the box with its bottom only. After the glue is set, add inlays to complete the outlining of the joints. The inlay steps are the same as for fixing a gap in an undercut on a pin board:
1) Saw a diagonal kerf along the line of the joint between the tail and pin baselines
2) Cut a slightly oversized and thicker isosceles triangle from the inlay blank and hammer it to final thickness
3) Glue the inlay – with its grain oriented in the same direction as the pin’s – into the saw kerf
4) Trim off the inlay with a sharp chisel and clean up all the joints with a smoothing plane.

After easing the edges on the box, glue the handle into the housing dado. I chiselled the top ends of the handle flush with the top edges after the glue was cured. Lastly, apply a finish of your choice. As illustrated here, the outlined dovetail is not much harder to cut than a typical dovetail. This is my first project featuring such a decorative dovetail and it certainly won’t be my last.