The Golden Carpman Display Cabinet:
Yuri Karpov creates a cabinet in the style of Robert Thompson 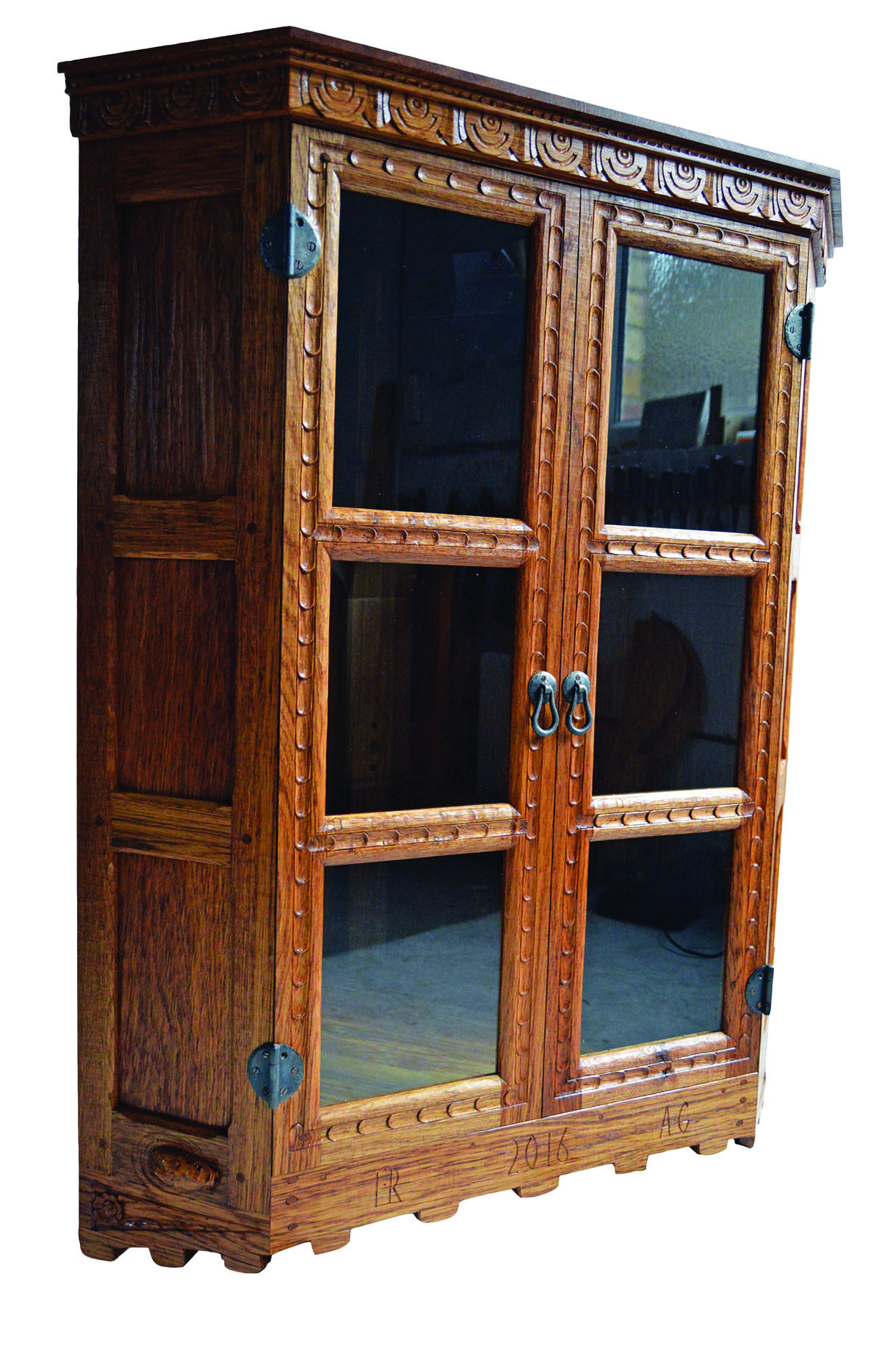 Yuri Karpov creates a cabinet in the style of Robert Thompson

About  a year and a half ago I was asked by Dr Timothy Rideout to create a corner display cabinet for him in the style of Robert ‘Mouseman’ Thompson (1876–1955), a British furniture maker who lived in Kilburn, North Yorkshire, where he set up a business manufacturing oak furniture, which featured a carved mouse on almost every piece. The challenge was accepted with great pleasure and I started my research.
The idea was not to copy but to get as close as possible to the traditional woodworking techniques in order to produce all the elements of the display cabinet: the carcass, panels, doors, shelves, carvings and, more importantly, a rustic, uneven wooden surface finish (traditionally achieved by using an adze – a type of woodworking axe with a wide slightly curved blade) according to Robert Thompson’s craftsmanship style.

Timber choice
Instead of ordinary English oak (Quercus robur), as was used by Thompson in his day, I used brown oak. This is technically not a distinct species of oak, but rather refers to oak, almost always English oak or another European species, that has been infected with a fungus. This fungus (Fistulina hepatica) has the effect of turning the wood a deep brown colour. Once the wood has been cut and dried, the fungus dies, leaving a rich golden-brown lumber. By using brown oak, the piece gained that unmistakable deep golden-brown colour that adds unique character to the finished item.

Tools and techniques
Before making up my mind about what techniques and tools to use I examined a few original pieces of furniture made by Thompson. The joints and carvings were done in a rather crude way: he didn’t seem to mind the odd gap and the carved elements often lacked fine detail. The rippled adzed surface suggesting that’s how the wood left the saw at the mill.
It gave me a little bit of a headache to understand at what stage the adze was used. After looking into the traditional use of the adze in Europe, I widened my search and looked into the Japanese tradition as well. To my surprise and excitement I discovered extensive use of a tool with a laminated steel blade and a bent handle called a chouna. This tool has a long history and has been used in Japan for centuries before the long saw was even invented.
The chouna was used to rough-shape timber and planks previously split out of tree trunks. Interestingly, the tool did not lose its ancient shape over time and it is possible that Europeans adopted this tool from the Japanese. The superior quality of Japanese laminated steel and mysterious bent handle convinced me to choose the chouna for my project. 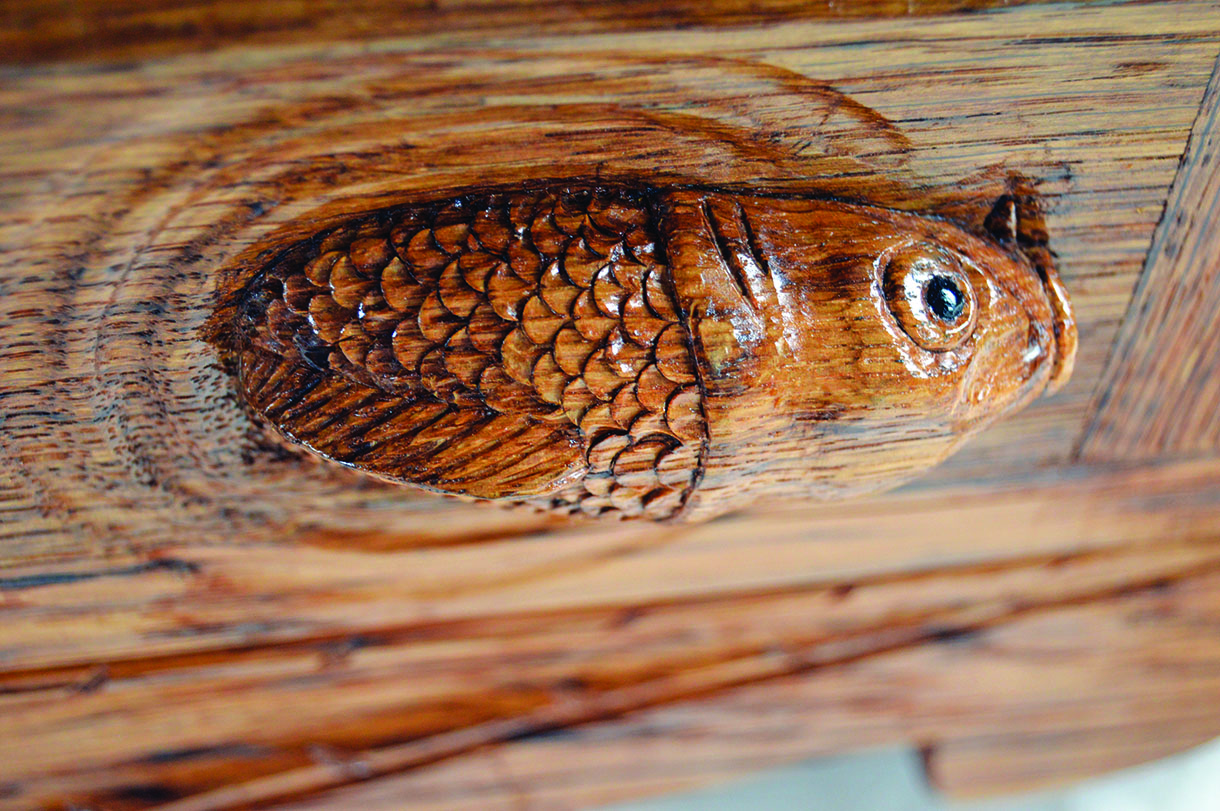 Detail of the carp

The carcass and doors were done in a traditional way of making a frame construction, with mortise and tenon joints pinned with a through dowel, and a locked panel. The panels were finished before they were installed. The front frames and doors had to be adzed separately, one by one, before they were joined with the main carcass. Only after the adzed surface was produced on both doors was the decorative ornament carved. The cornice was carved separately before installation on the carcass. Carved motifs were inspired by the original pieces of furniture made by the famous ‘Mouseman’. The only difference I made was by making the details more pronounced and alive.
I noticed the difference working with brown oak as compared to English oak: the brown oak is slightly softer and more brittle to work across the grain, possibly due to the effect of the fungus on the strength of the fibres. Nevertheless, it is a joy to work with.
The front of the carcass has a rather intricate (but very important construction-wise) angled joint. The idea of having it just doweled together did not satisfy my conscience. Therefore, I decided to make an inside butterfly joint. Due to the rather odd angle, the butterfly element had to be made in a way such that it would pull and lock both sides together when inserted. After a few smoking sessions (a cigarette couldn’t help, in this case, a good sized cigar was needed) and trying the joint in action on a separate piece, the solution was produced. I used only hot animal glue in the whole project. 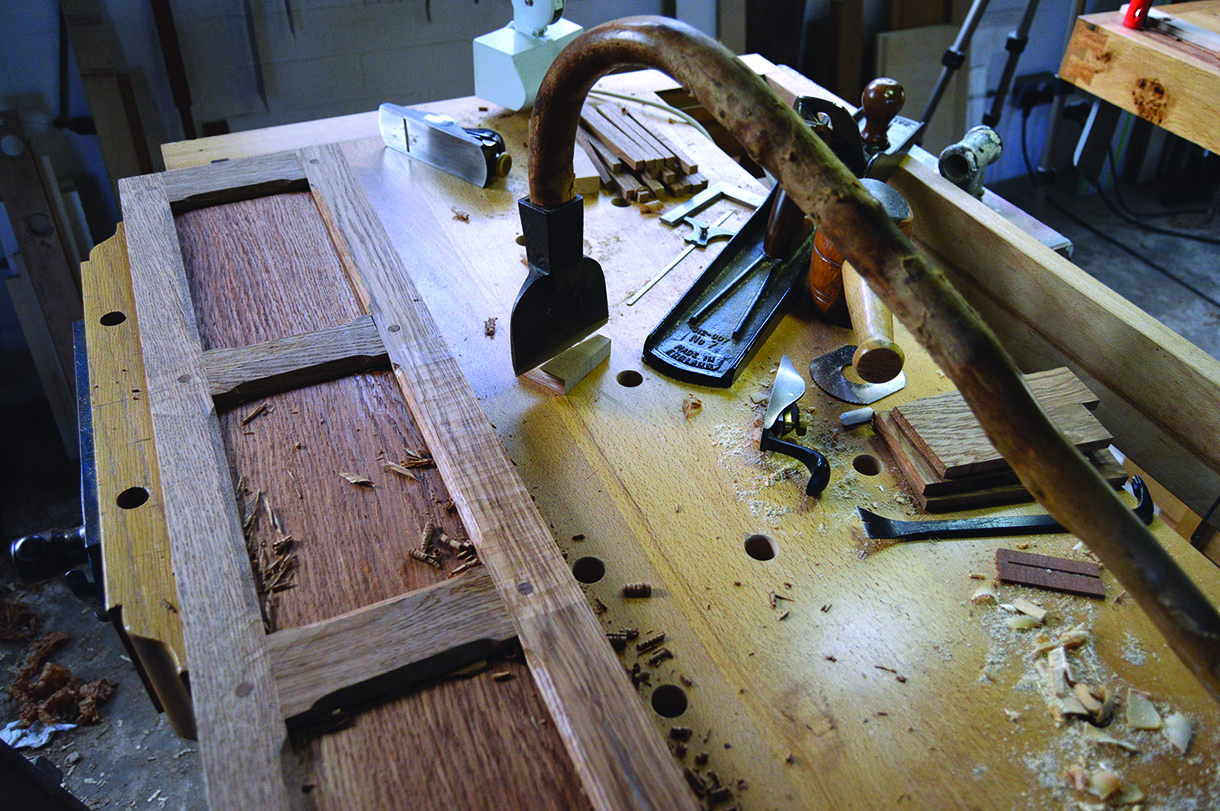 The chouna is a traditional Japanese adze 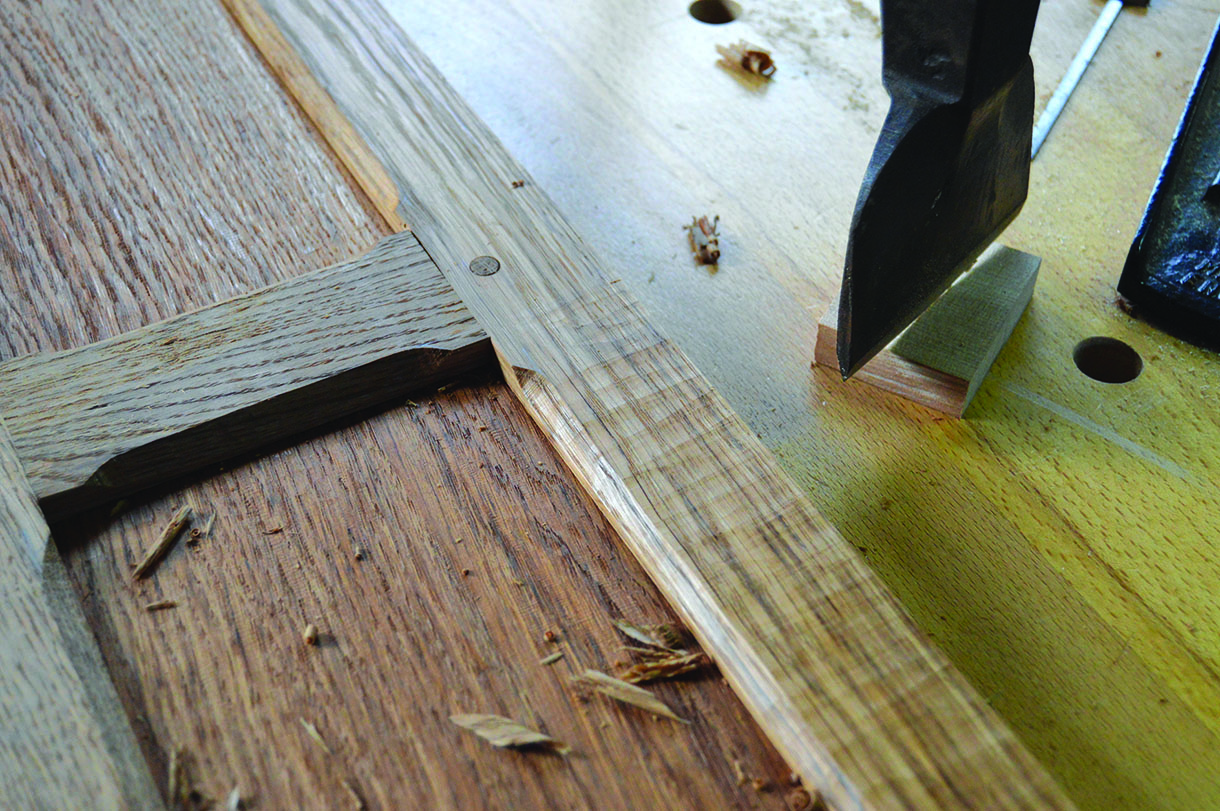 The chouna leaves distinctive marks on the timber surface 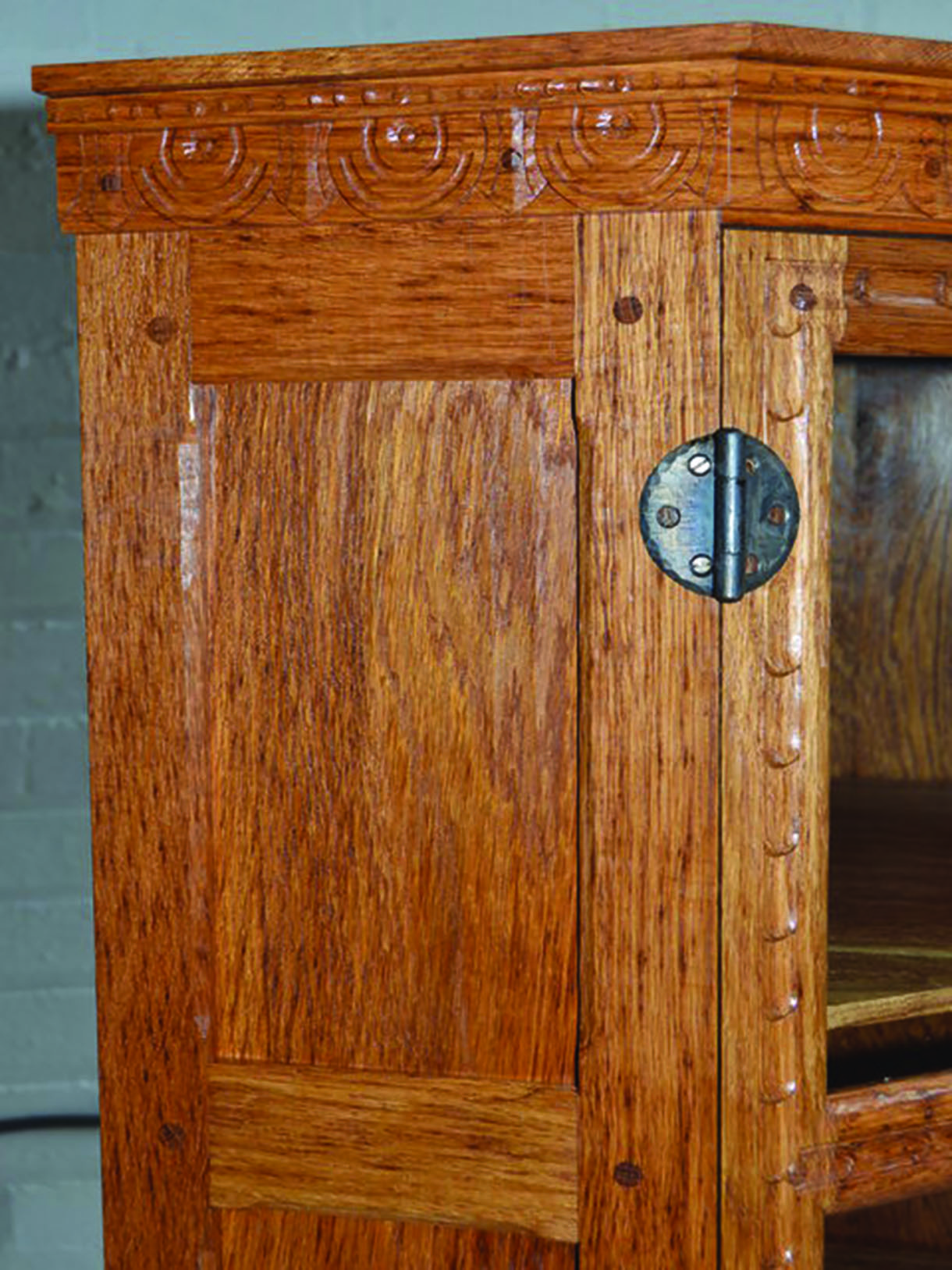 Decorative motifs were carved around the doors 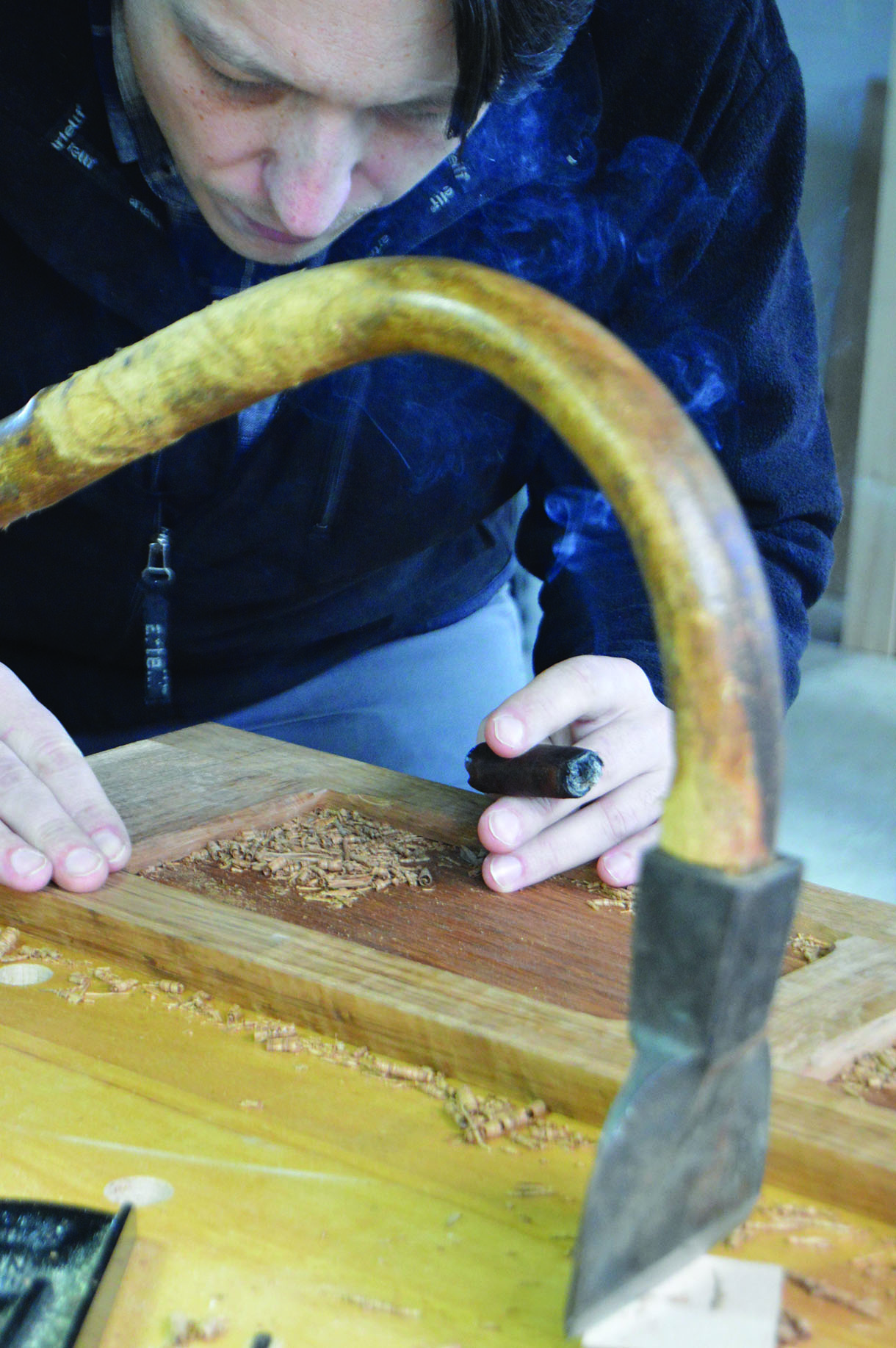 The apron
The apron was again inspired by one of Robert Thompson’s pieces. Indeed, this element added a good, harmonious look to the low part of the piece. The year when my cabinet was finished and the initials of the couple that commissioned the project were carved on the front part of the apron. 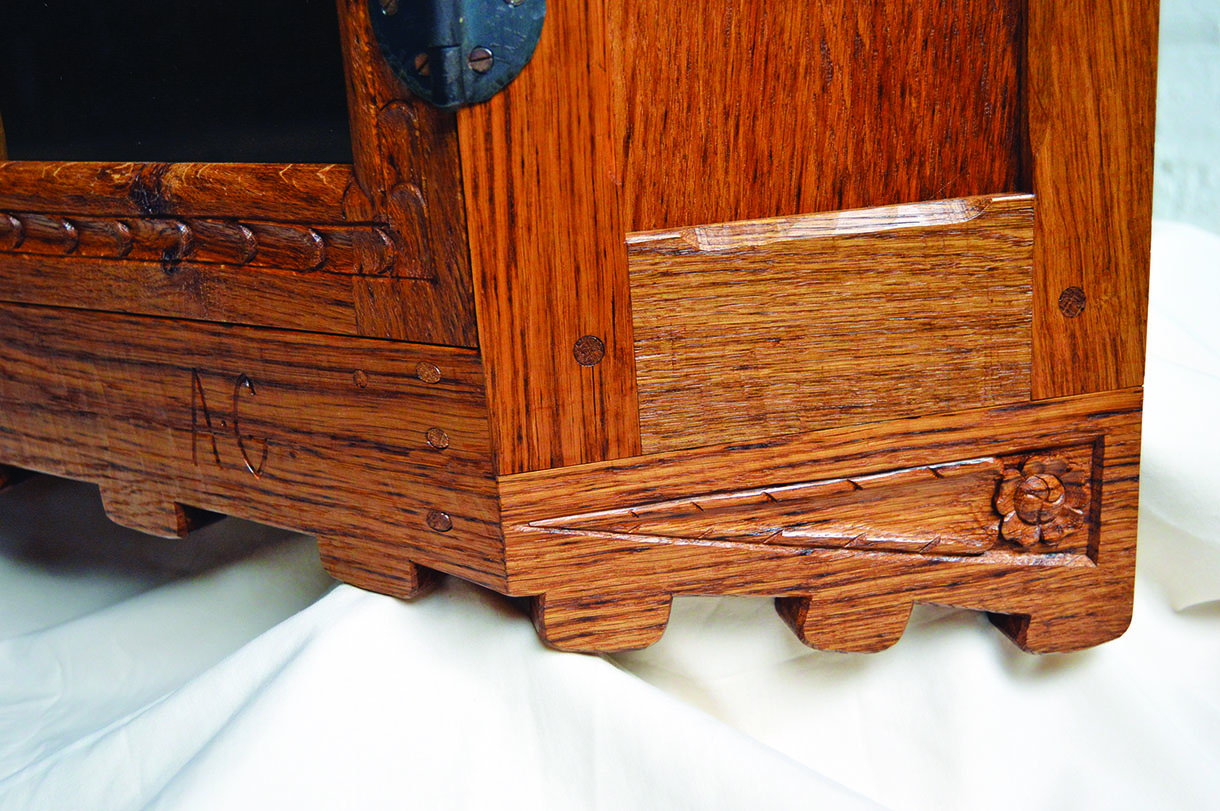 The clients’ initials were carved into the front of the apron

The hardware
The hardware was hand-forged by a local Yorkshire blacksmith, in the same way as the original hardware from the 1920s of the Arts & Crafts revival period were made. 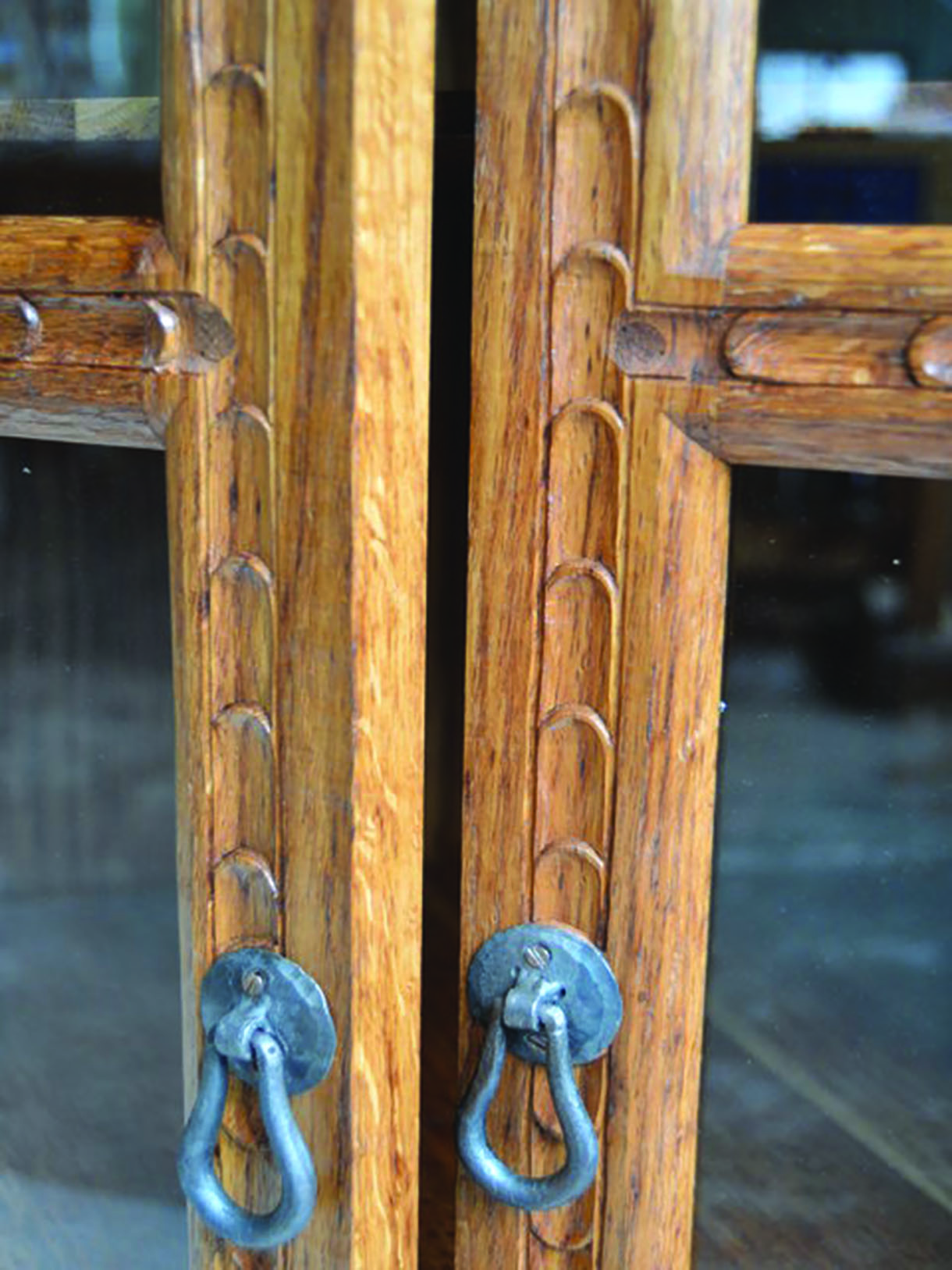 The hardware was forged by a local blacksmith

The carp
The idea of leaving a symbol on the cabinet that would be different to the famous Yorkshire craftsman’s and wouldn’t be mixed up with his works was suggested by the client. Thus the golden carp was born.
I looked at many different images of koi carps before choosing the one that I was going to carve. Instead of being attached to the surface of the piece of furniture similarly to Thompson’s signature mouse, my carp lives and swims inside the cabinet. 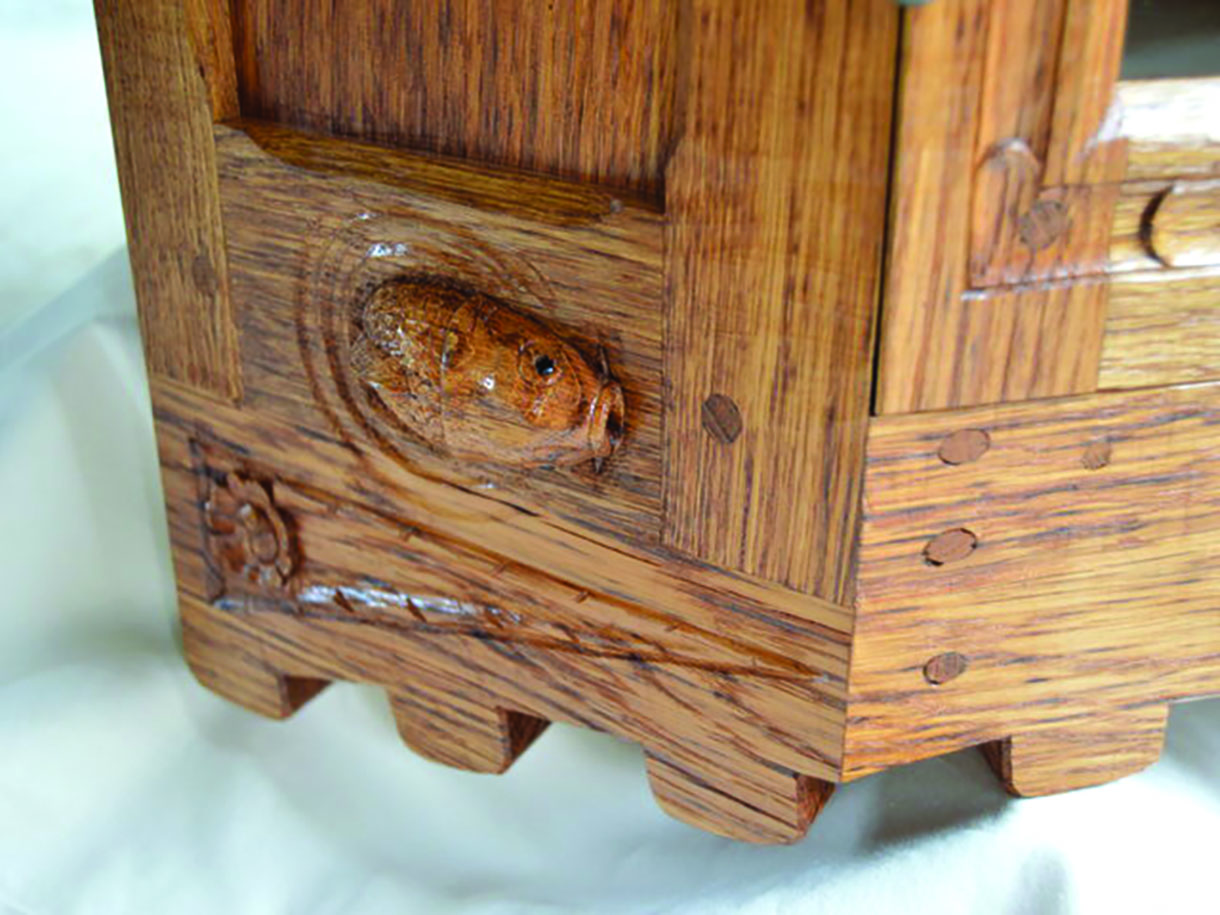 The cabinet features a carved carp, rather than a mouse

The finish
The cabinet has not been stained with any artificial colour and remains the natural deep colour of the brown oak. I used Osmo transparent oil to create the satin shine as a decorative surface and bring the adze’s uneven tool marks to life. 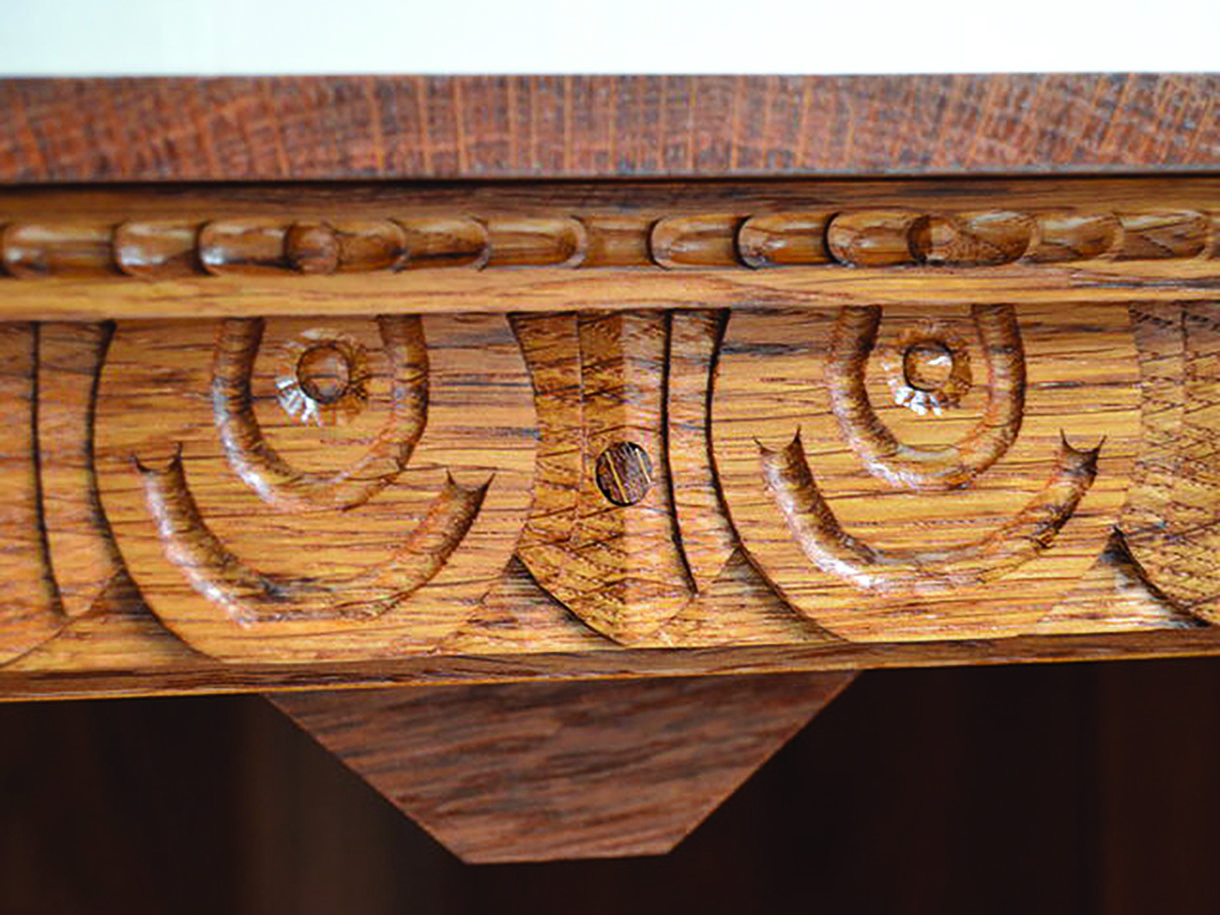 I used transparent oil to create a satin shine