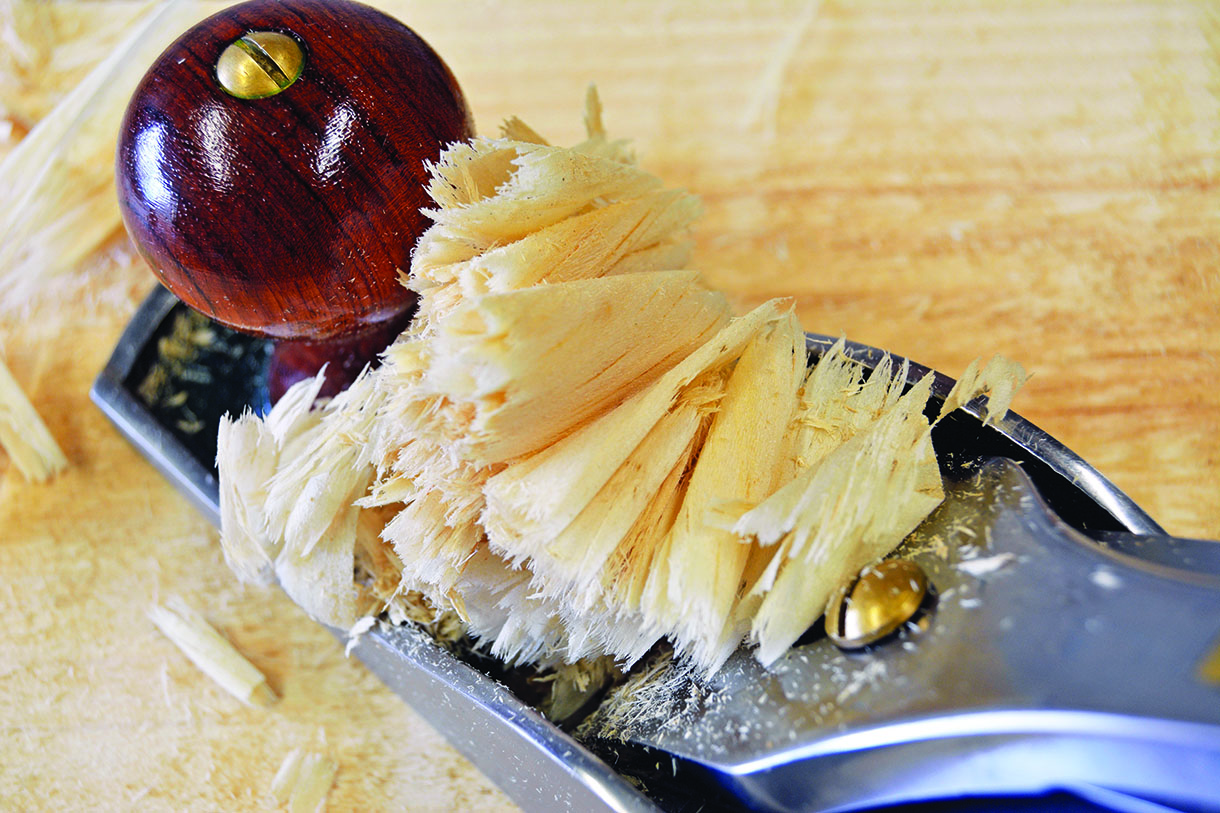 We all have different ways of learning new woodwork skills, and refreshing our grasp of the basics, but how many of us have undertaken a Victorian apprenticeship in order to improve their woodwork? Well, that is exactly what I spent the summer doing, all from the comfort of my own workshop thanks to a 19th-century text that has been republished by Lost Art Press.

A very traditional apprenticeship
First published in 1839, The Joiner & Cabinet Maker takes the form of a story following the apprenticeship of a young lad called Thomas. We see Thomas at the very start of his apprenticeship when he builds a packing box for a customer to transport books, at the middle of his apprenticeship when he builds a small dovetailed chest for a customer to take to school, and finally at the end of his apprenticeship when he builds a chest of drawers. Although the identity of the author is unknown, they were clearly either a woodworker or very familiar with woodwork, as the projects and tools are described with great detail and clarity.
But more than just being a historical curio, by describing in detail three projects of increasing complexity the book offers an opportunity to develop solid hand-tool techniques, and build up a compact handwork-focused tool kit, in a systematic fashion. As a consequence, I would argue that The Joiner & Cabinet Maker is an excellent introduction to hand tool work for the novice woodworker, and also a valuable refresher for more experienced folk. 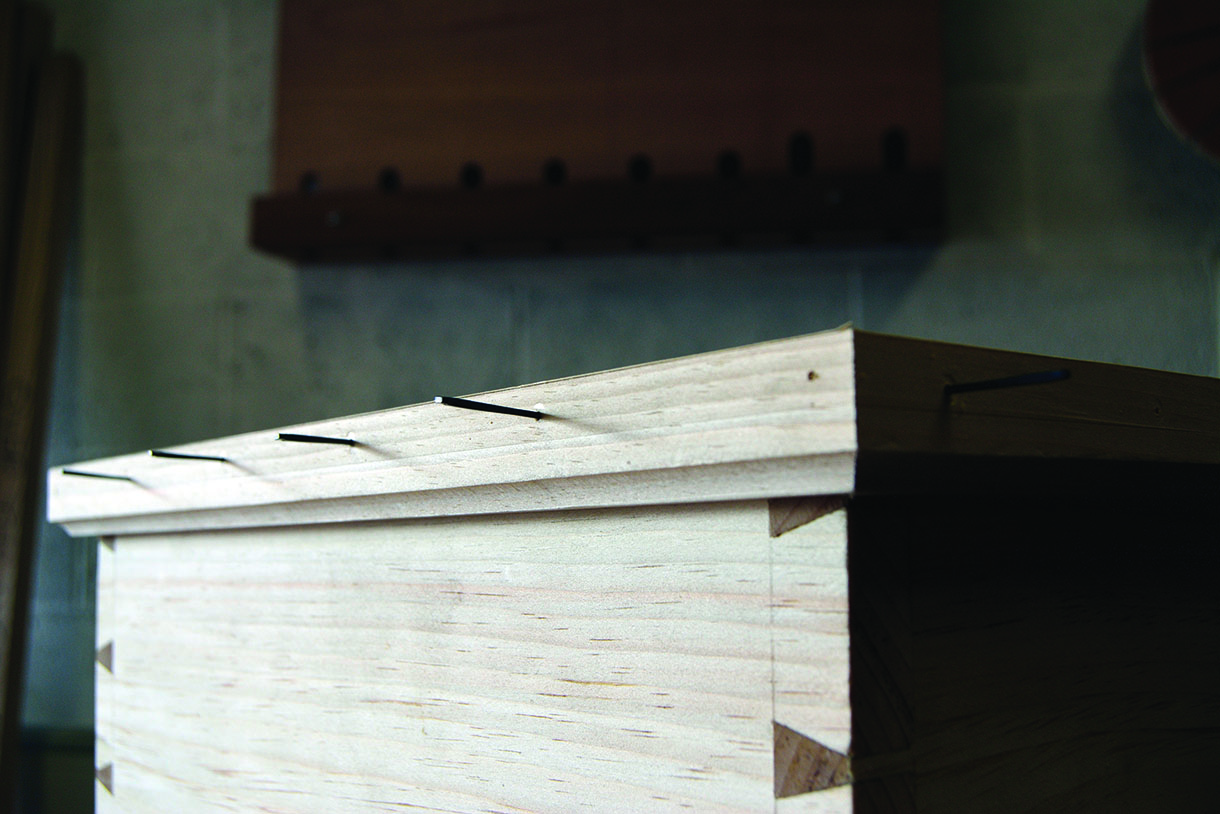 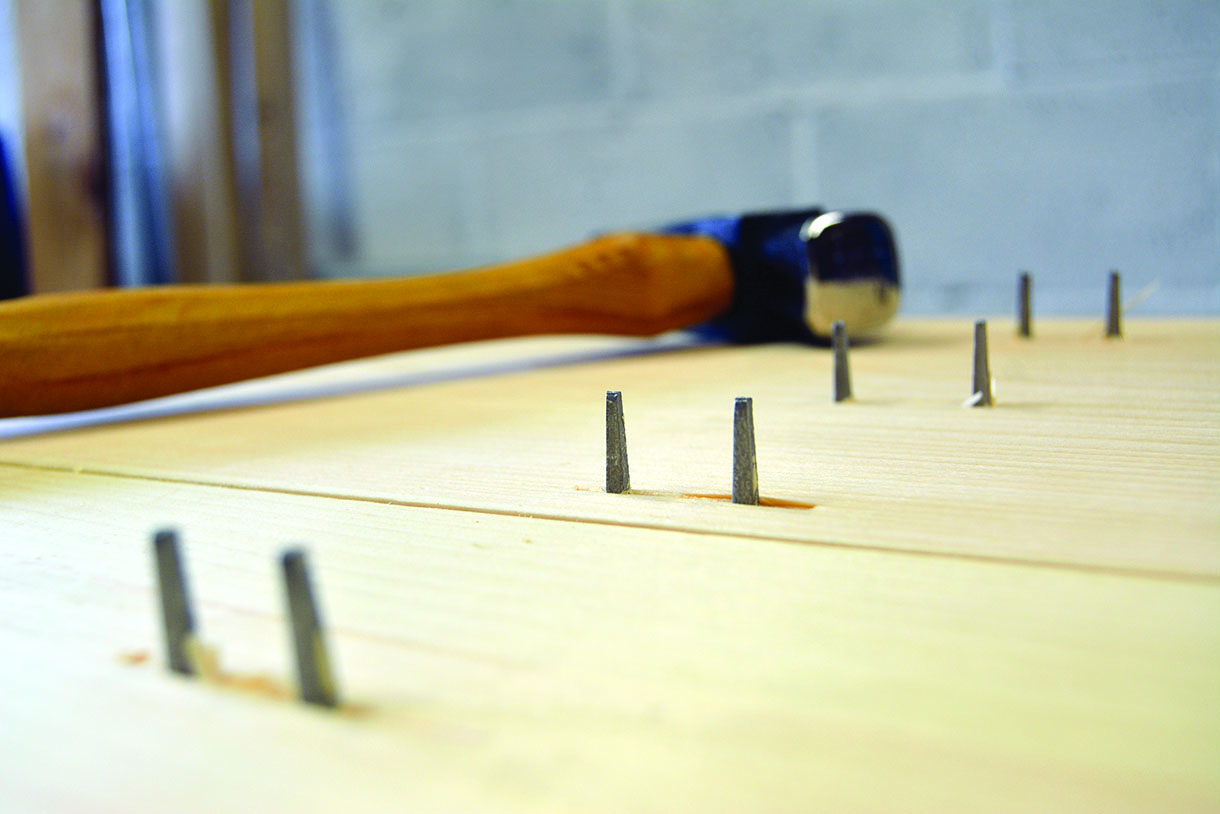 Cut nails waiting to be clinched 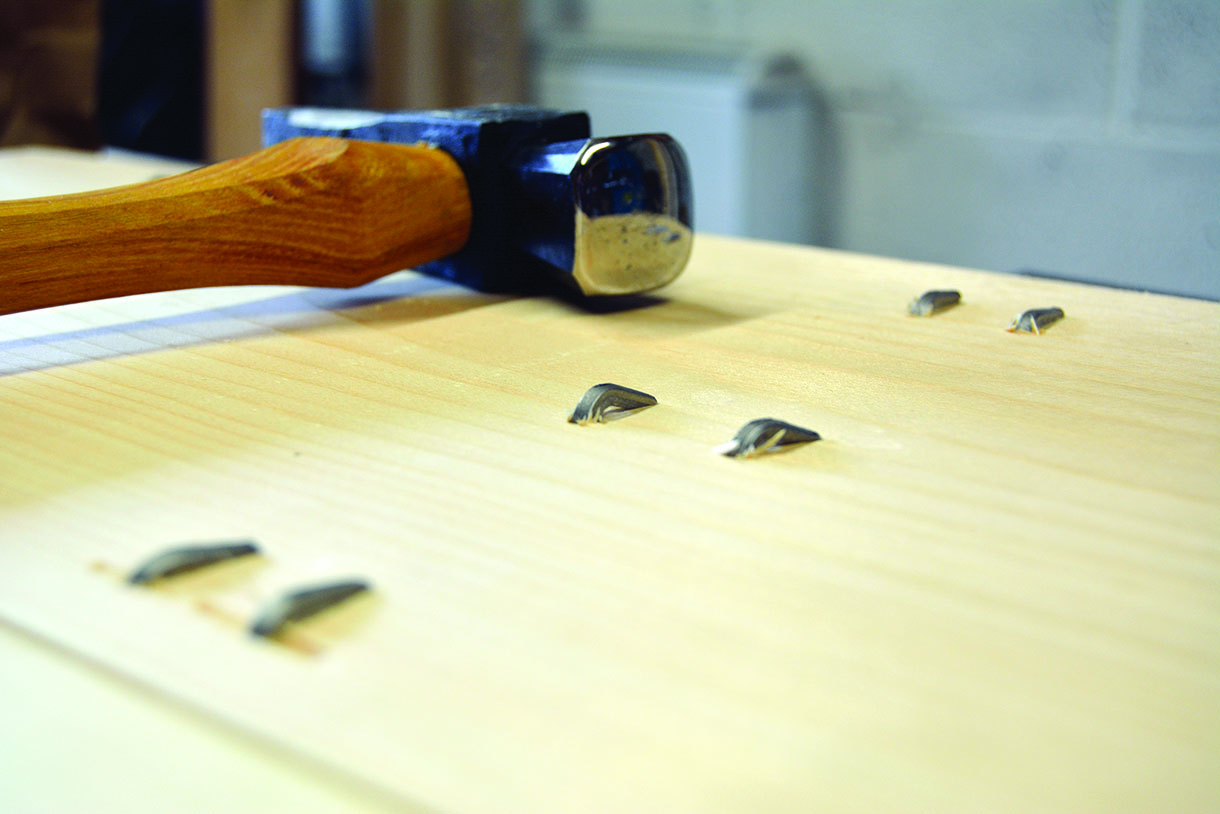 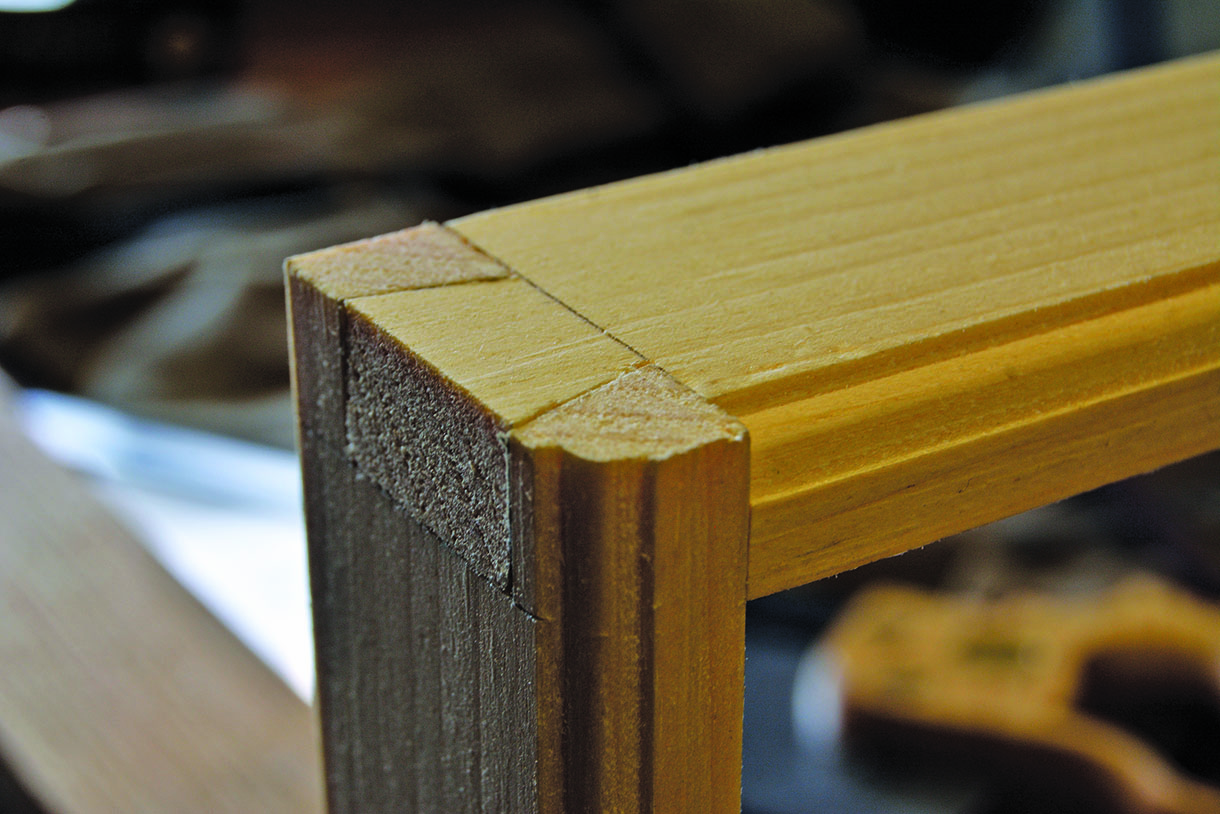 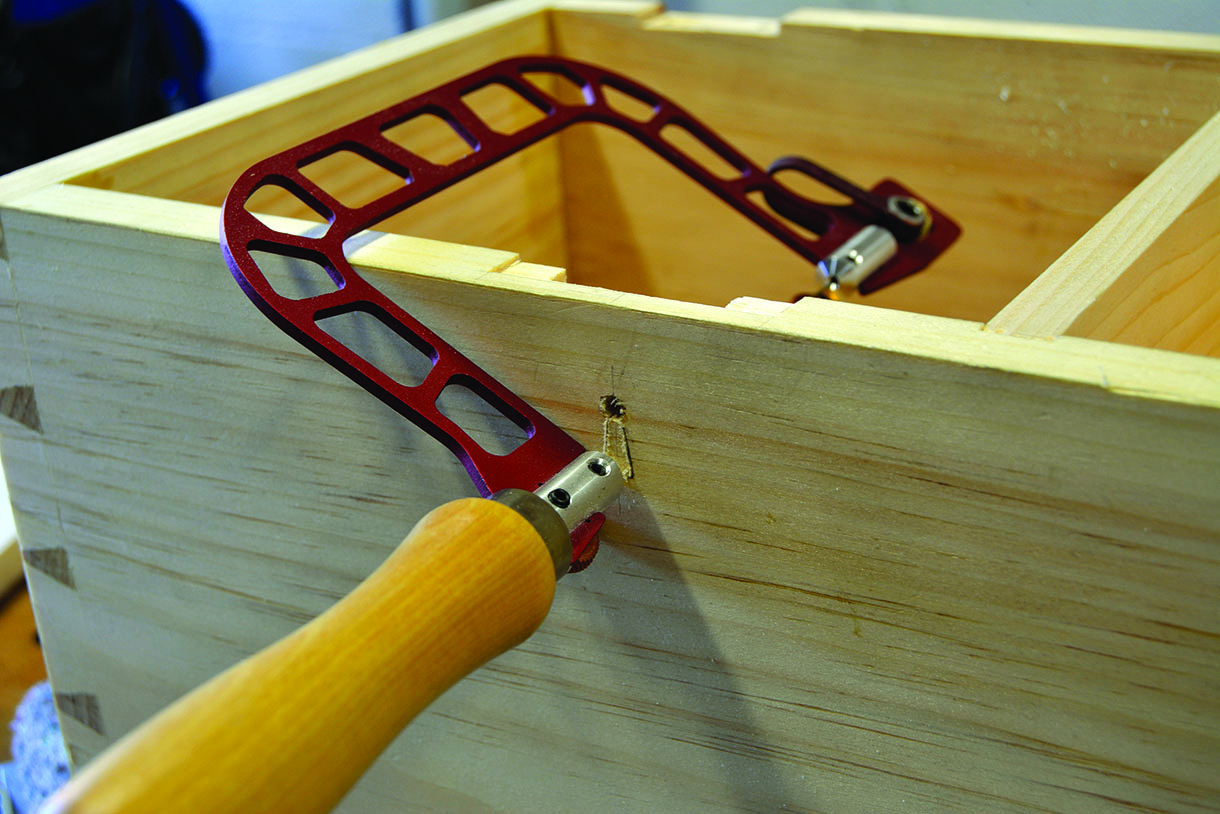 Cutting the keyhole for the School Box lock

Becoming the joiner’s apprentice
Over the summer I built the Packing Box and School Box projects, and now have just the chest of drawers left before I complete my virtual Victorian apprenticeship – you can read my detailed build notes and experiences working on these projects on my blog, www.overthewireless.com
The first project, the Packing Box, is held together entirely by nails – battens are clinched to the top and bottom of the box, while the sides are secured with nailed butt joints.
As this is the first project Thomas undertakes in his apprenticeship his tool kit is limited to ruler, chalk line, jack plane, smoothing plane, square, marking gauge, rip and crosscut saws, hammer and either a brad awl or drill. The simple construction methods and limited tool kit therefore make the packing box a very accessible project to the beginner, and is a useful reminder that it does not take an endless list of tools to build furniture. For added excitement, Thomas is only given five hours to build the packing box, so there is the option to race the clock with this build if you choose!
The individual projects are fun to build, but work through them in sequence, using only the tools and techniques described in the text, and deeper lessons become apparent. I’m not just talking about how to cut a good dovetail, although the text tells you how to achieve that, but more fundamental skills which are invaluable to successful woodwork. For the Packing Box, Thomas has a single board (12ft 3in long and 9in wide) with which to build a box to the customer’s dimensions.
To achieve this accurate layout and efficient use of stock is essential, particularly to harvest the battens that hold the top and bottom of the box together. The School Box builds on these themes while also introducing the key skill of processing rough stock with hand planes, as well as fitting locks and hinges, and making mitred moulding runs.

The projects are nicely paced so that techniques and tools are introduced at a rate that makes them easily accessible to the beginner, and the first two projects are simple enough that results can be seen rapidly, which makes them very achievable. What is more, by working through the projects in sequence you can start with a very small tool kit that is slowly built up. The complete tool kit Thomas finishes the book with is still quite modest compared to that of many modern workers. The cost and number of tools needed for furniture building can often be seen as prohibitive, and giving new woodworkers a shorter shopping list
can only encourage new entrants to the wood crafts.
The lessons offered by The Joiner & Cabinet Maker are not just for beginners. The projects also offer a valuable refresher, and new perspective, for more experienced woodworkers. One of my favourite moments from the Packing Box was squaring up stock in a bench vice with a smoothing plane rather than using a shooting board as I would normally do. This sounds like a hard way to work, but actually it works really well and doesn’t take too long. Yes, a shooting board makes things easier (especially on wide boards)
but the realisation that you don’t actually need a shooting board can be quite liberating!

A new generation of apprentices?
Working through the projects in The Joiner & Cabinet Maker has provided an entertaining and rigorous way to further develop my furniture building skills, and I highly recommend this book to anyone who wants to delve deeper into hand tool furniture making. My daughter is a little young to have her own tool chest just yet, but when she is old enough to join me in the workshop I can’t think of a better way to start her off than with young Thomas’ Packing Box build.