In My Workshop with Liam Gardner 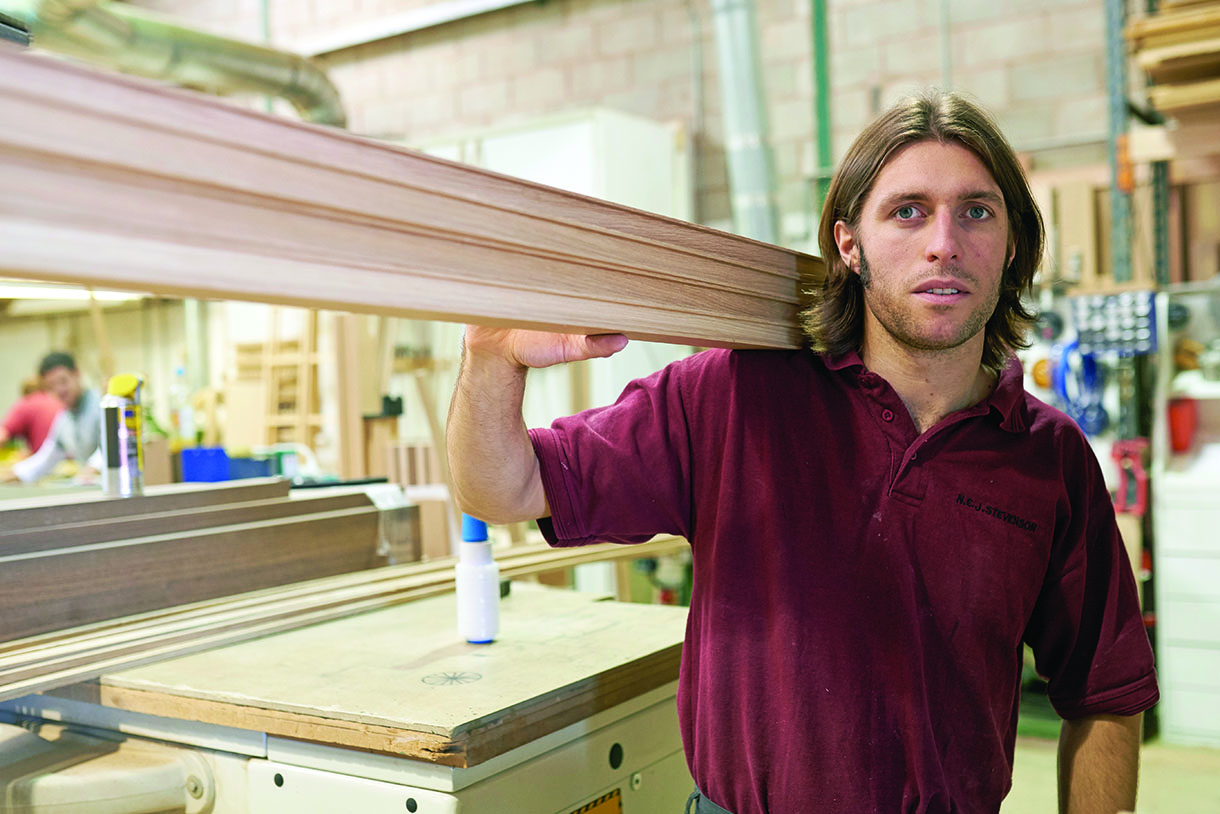 From heritage pieces to ‘miniature’ cabinetry, senior craftsman Liam Gardner recommends following the best approach to the task in hand – be that modern, traditional or a combination of both

In a follow up to our main feature last month, we’ve returned to the workshop of N.E.J. Stevenson to talk to senior craftsman Liam Gardner. Throughout history and the world over the most successful furniture making companies have relied on a skilled workforce to run a successful business. On the shop floor and key to almost every aspect of any build is the senior craftsman whose job it is to steer a team of talented individuals to achieve a common goal. As we saw last month N.E.J. Stevenson can turn their hand to practically any project involving the finest cabinet work or the most exacting and complex architectural joinery. Furnishing everything from royal palaces and floating ones to the accessories required for some of the most prestigious and high profile state visits, the company has never shied away from a challenge. Managing director Neil Stevenson once said that he defines staff as ‘‘either overheads or earners” the former providing support for the latter. It’s a tough but essential slice of reality that has helped shape the company. A perennial problem that affects all craft-based skills is to avoid being pigeon-holed or typecast in a single mould. “I never understand the idea that if you do traditional design that somehow suggests you can’t do comtemporary. To me one informs the other”, he said. On the subject of clients and the next commission Neil is not blase about the oportunities that have come his way and about the role of the team that supports him, saying: “You might be only as good as your last job and the problem is always finding the next job and that doesn’t really get any easier.” He’s also accutely aware that some of what he’s given credit for would not be possible without the dedicated workforce around him. Key to many successful projects is senior craftsman and mentor to a new generation of craftsmen at N.E.J. Stevenson, Liam Gardner. Here’s what he had to say on the subject of craftsmanship, design integrity and the future of bespoke cabinetmaking. 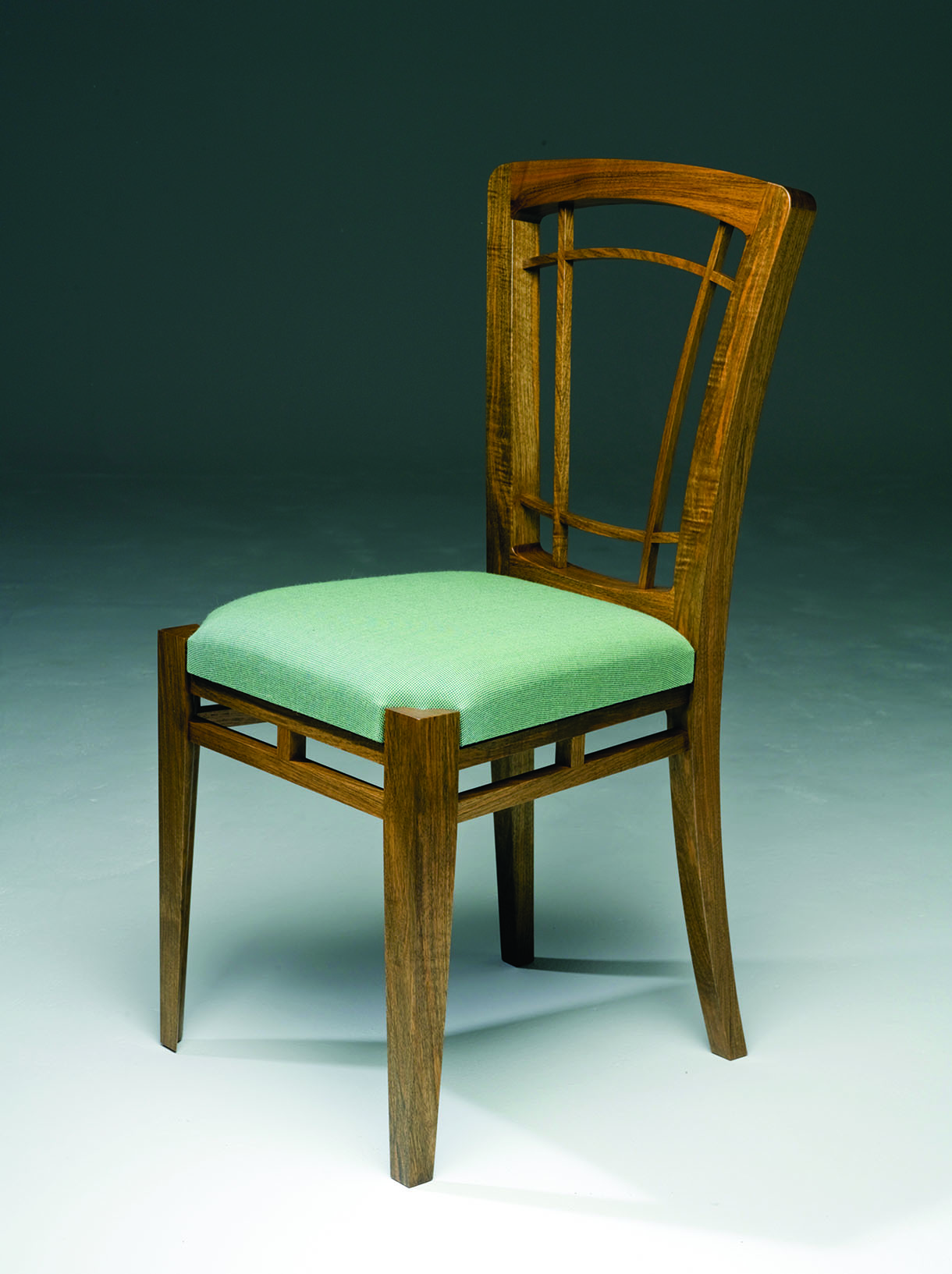 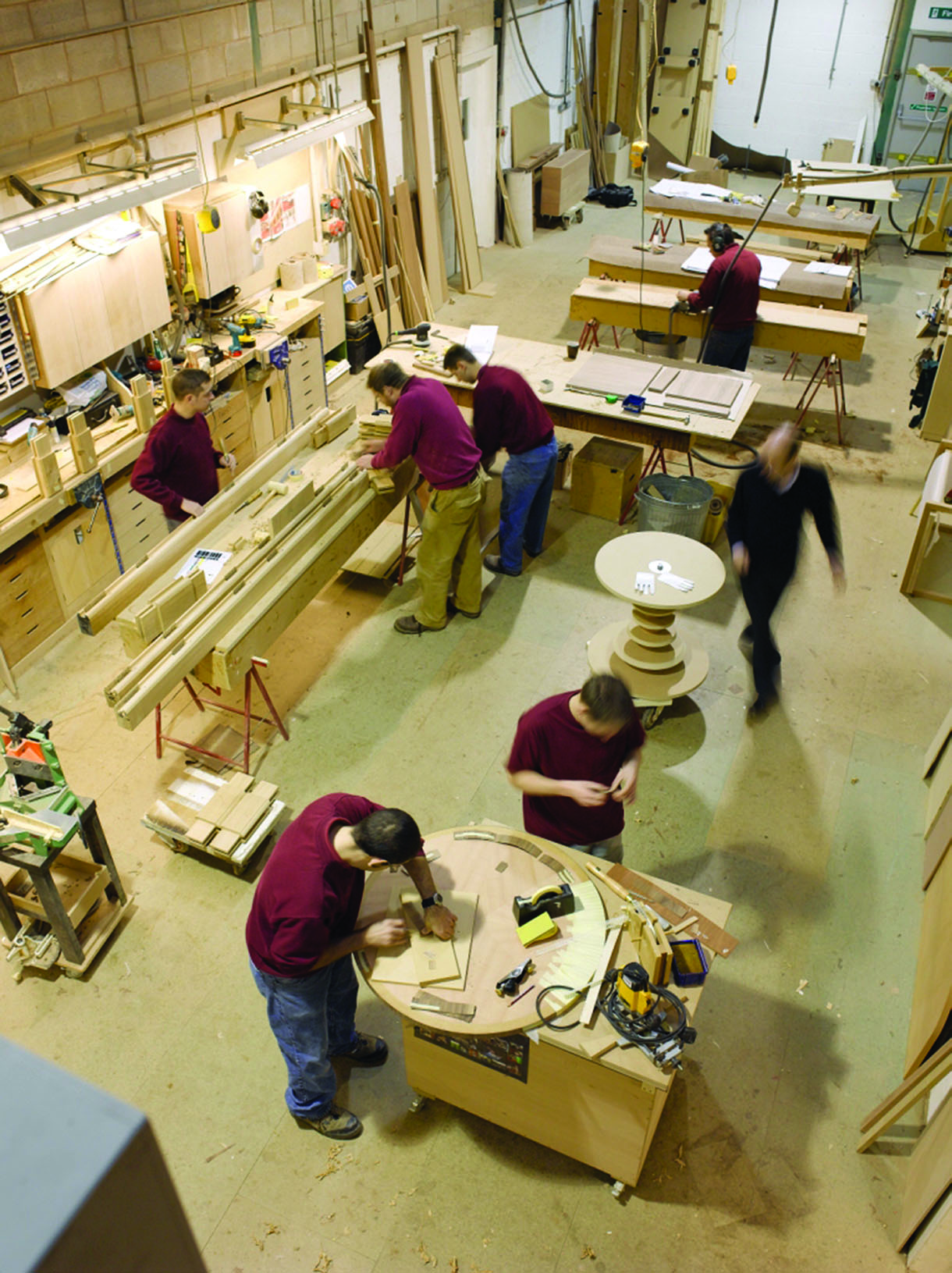 The busy workshop at N.E.J Stevenson

FC: Liam, how did you get into making?
LG: I never questioned doing anything else. From a young age, I was always interested in the industry. I left school at 16 and took up an apprenticeship in a workshop in the Yorkshire Dales. As a teenager, I found learning about all the different disciplines really interesting.

FC: Do you work with any materials apart from timber?
LG: Yes; we use a lot of decorative materials, as well as different kinds of fabrics and leathers. We’ve even worked with shagreen, which is the skin of a stingray. Other interesting materials that we’ve had the privilege to make use of include alabaster, a translucent stone that allows light to shine through it, buffalo horns and many types of glass and metal.

FC: As a senior maker at N.E.J. Stevenson you’re obviously comfortable making piecesthat have been designed by someone else. Do you ever feel that it is depriving you of your own creativity?
LG: I wouldn’t say deprived – you know the score and understand that you’re working to someone else’s design; we can still express our creativity through the material selection and construction methods. At smaller makers, like the one I started out in, you might have a little more input. However, if you want to do your own designs at N.E.J. Stevenson, you are definitely encouraged to do so.

FC: What’s the piece of furniture you would have most liked to have made?
LG: I really admired a piece by designer Marc Fish, which came out a few years ago. It’s called the Nautilus table and is designed ‘with a hint of the sea’ due to its location in a rooftop apartment overlooking the English Channel. It’s a really distinctive and eye-catching piece.

FC: Would you say you are more reliant on hand tools or machine tools?
LG: It’s hard to measure as both play an important part in my role as a senior craftsman. I would say it’s important to have a good grounding of traditional hand skills, but it is equally important to understand the value of machines to aid efficiency and speed. Ultimately, it depends on the piece and the skills that are required to achieve the best result.

FC: What’s the tool you can’t do without?
LG: That’s an easy one. It would have to be the Veritas low-angle block plane, simply because I use it regularly on most projects.

FC: How comfortable are you at being a mentor for impressionable young minds?
LG: I would say that I am comfortable with it. We have trainees at N.E.J. Stevenson that I feel responsible for. I think it’s important to pass on the knowledge you’ve gained as well as the knowledge you received when you first started.

FC: Some of the items you make at N.E.J. Stevenson might be considered as heritage pieces. How does it feel to be making things that will be documented and talked about long after you have hung up your apron? LG: It gives me a great deal of satisfaction because I know they’ll be looked at, and enjoyed by future generations. 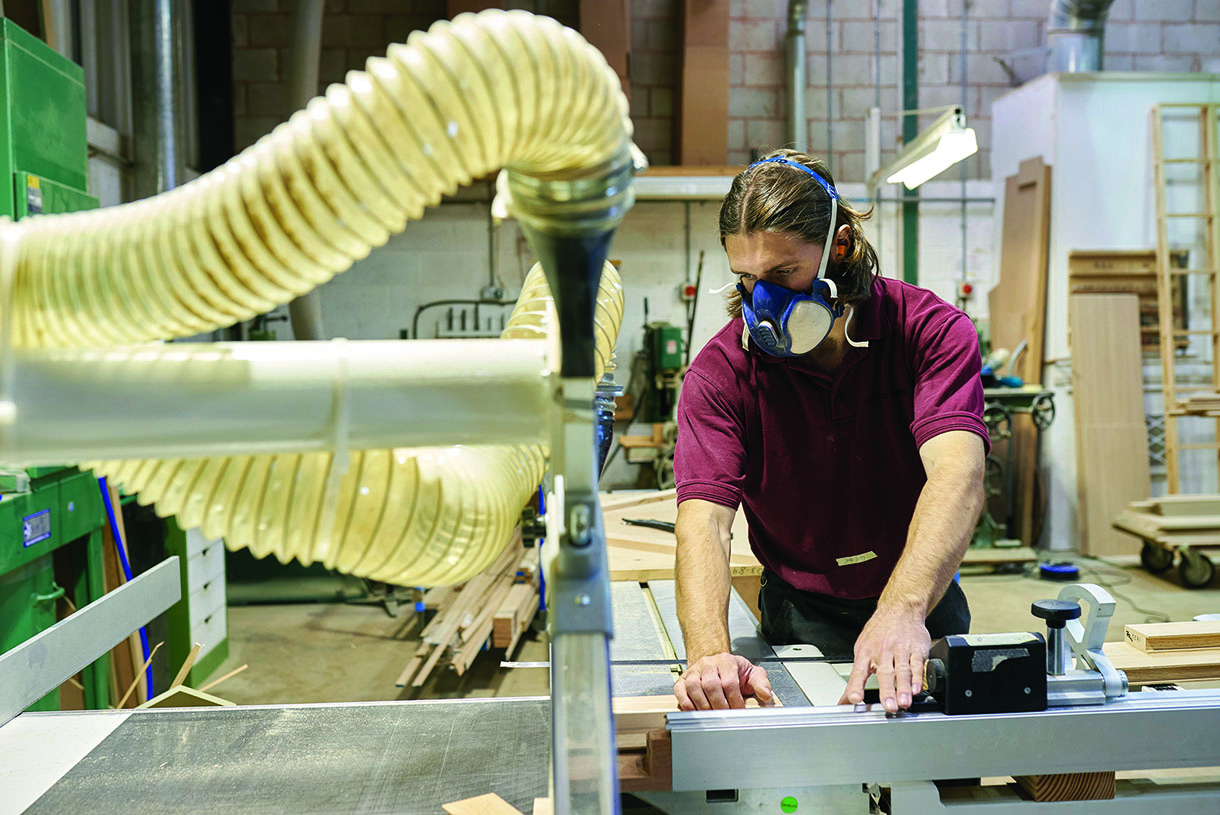 Both hand and power tools are important to Liam’s work

FC: Do you ever consider that you might be making the antiques of the future?
LG: Yes. They’re not disposable items, they are designed to last.

FC: If a conservator has to work on these pieces in the future what information would you like to pass on to them?
LG: It would vary. I would encourage them to enjoy the work and appreciate the craftsmanship and time that have gone into creating each piece.

FC: Are your methods and materials compatible with conservation and traditional techniques?
LG: Yes, but once again, it varies. Heritage – it’s in the name. We can accurately replicate all of the skills and techniques that would be considered traditional and where appropriate, particularly making replicas, we would choose to be authentic. However, given the future requirements of a piece we might, in discussion with the client or conservation body, use modern techniques and materials as they offer a better solution. It would be wrong to assume that traditional skills are always the best solution. We use both modern and traditional techniques; N.E.J. Stevenson have really embraced new jointing systems and synthetic finishes, which are both very modern approaches and differ a lot to the more traditional techniques.

FC: You must have a favourite designer, but who is the maker that has influenced your work the most?
LG: It’s hard to choose. One designer whom most people would be aware of is Wendell Castle but one who people won’t know about is a friend and ex-colleague of mine, James Richardson. We worked together at Andrew Varah’s, which is now no longer in existence, but he influenced me greatly. Another would be the ex-head maker at Andrew Varah, Tim Smith.

FC: The cases for the bottles must have presented you with a few challenges. Is there one that stands out? LG: The cases are really miniature cabinets using a large number of materials with varying properties that all have to be considered in relation to their interface with each other, this is particularly a concern where elements react differently to humidity and temperature; it was personally very important to make sure each part would work properly anywhere in the world. The secret drawers in the Diamond Jubilee case for example presented a number of concerns in respect to expansion and contraction as I like to fit my drawers to cabinetmaking tolerances. 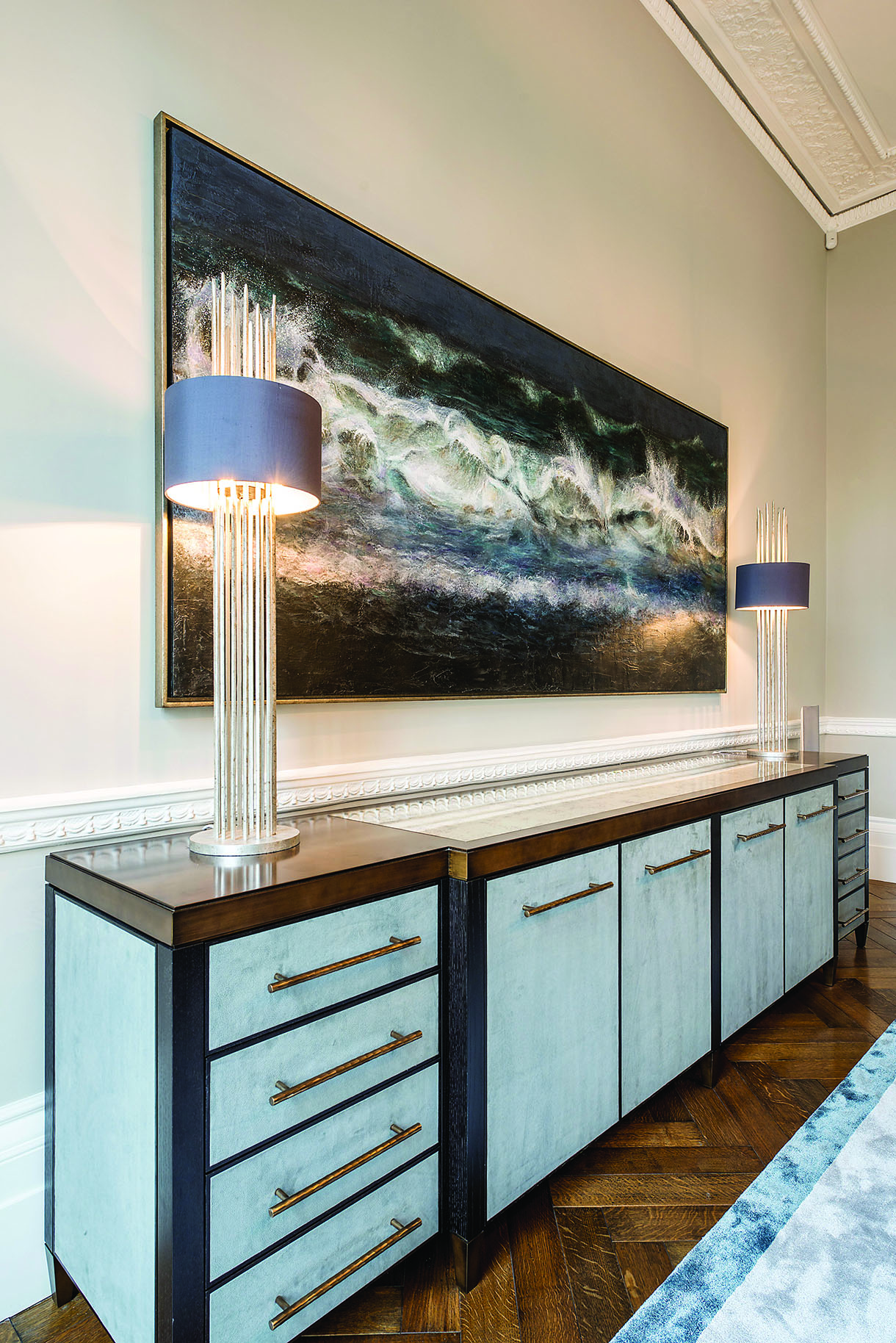