In My Workshop with Peter Walwin
The acclaimed woodsculptor, woodcarver and maker of fine furniture on Rodin, Einstein and how he doesn’t always follow his own advice 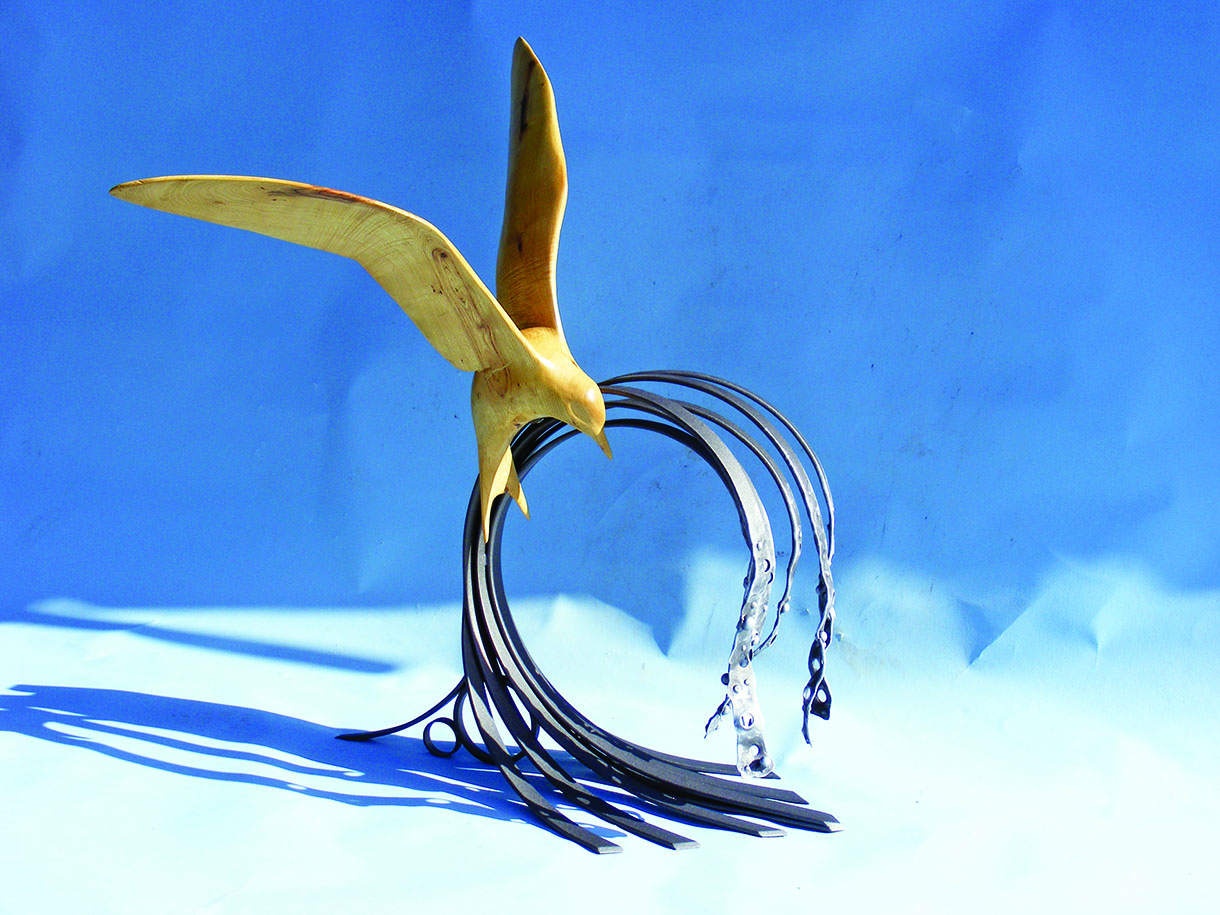 Fetch, one of Peter’s recent collaborative projects with artist and blacksmith MissFire 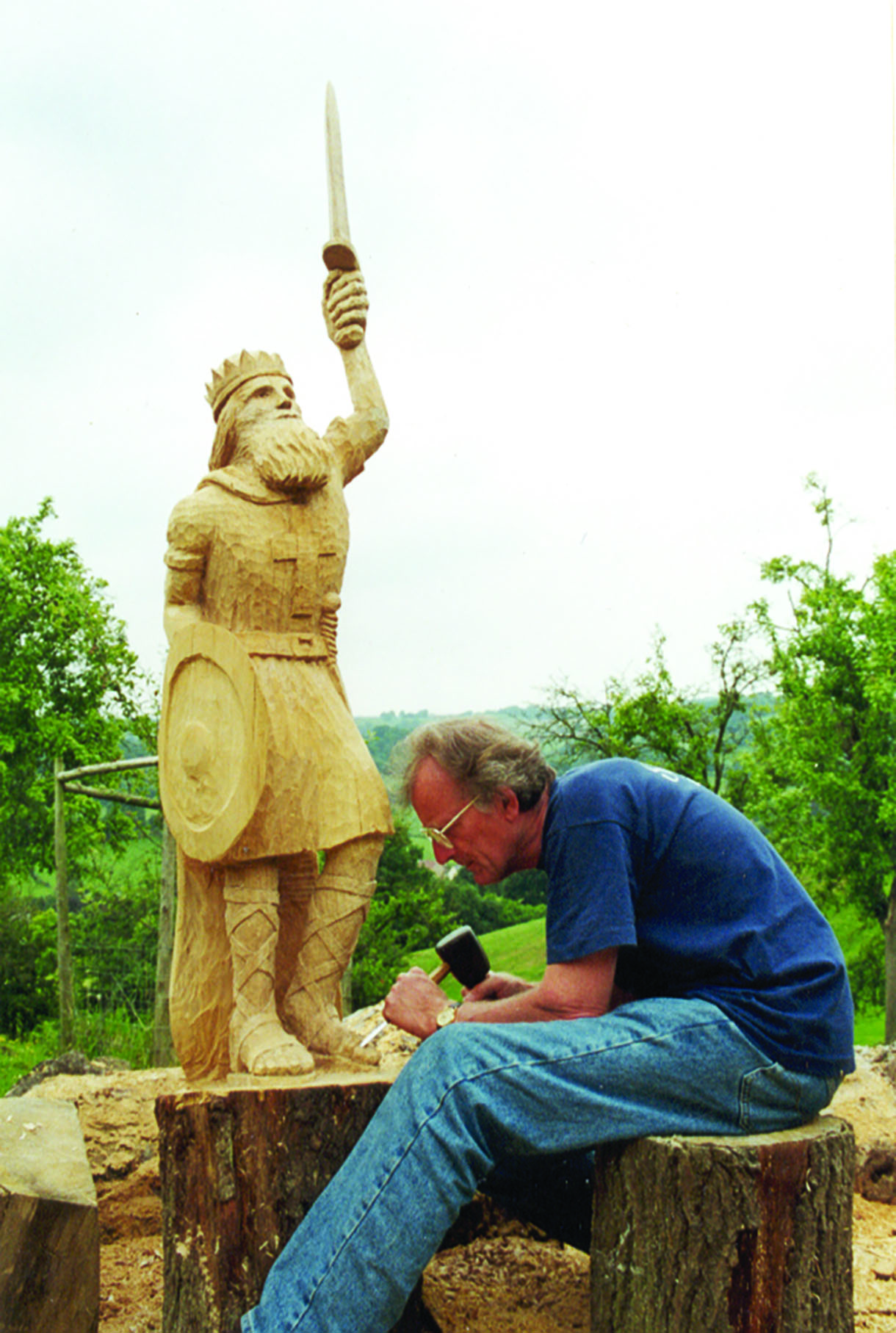 Gloucestershire-based Peter Walwin hails from what some might regard as a slightly unusual profession for carvers. He originally qualified as a chartered engineer. But after he left the field in 1984 his attention soon turned to woodworking. He is now a member of the British Woodcarvers Association as well as several art societies with whom he regularly exhibits. His pieces have won a number of awards and his expertise has often been requested on judging panels. Peter has a long association with the Nature in Art Gallery and Museum in Twigworth, Gloucester, where he has run woodcarving courses and frequently been an Artist in Residence. The gallery also exhibits some of his work while other pieces have found their way into the hands of many famous people, among them the Duke of Westminster, the Sultan of Brunei and Viscount Linley.
His carving also graces some of the UK’s most historic buildings, including Westminster Abbey in London. A more recent development is his collaboration with artist/blacksmith Clare Robertson, creatively known as MissFire. The result has been innovative sculptures that combine metal and wood and have attracted great interest.

WC: How, when and why did you start carving?
PW: As a child I was always making things, model aircraft in particular, which involved carving propellers. I always had a penknife.

WC: What and who are the greatest influences in your work?
PW: The natural world, birds, seabirds in particular. I also find the work of [French sculptor] Rodin an inspiration and hold a fascination for the human hand.

WC: If you were to offer one piece of advice to a fellow carver what would it be?
PW.:Try to think through the processes of carving your piece before cutting timber. In particular how you are going to hold it. I do not always do this!

WC: What music do you listen to and which book are you reading?
PW: I have no great interest in music, but enjoy Classic FM in the workshop. I enjoy biographies, but I am currently trying to get my head around [Albert] Einstein’s Relativity without much success. I think I will soon go back to a biography.

WC: What is your silliest mistake?
PW: I was carving a complicated leaf pattern on a prestigious walnut (Juglans nigra) architrave and suddenly noticed I had omitted a leaf. A restoration job fortunately redeemed the situation.

WC: What is your favourite type of carving?
PW: Wildlife, particularly birds and trying to exploit the beauty of the timber.

WC: And what would you say has been your greatest challenge?
PW: Carving a replacement leg for a miniature antique deer in ivory. Interpreting the style of the piece and getting the colour to match.

WC: If you could change one thing, what would it be?
PW: I have sometimes thought that it would have been better to change career at an earlier age, but on reflection, perhaps not. I have been very fortunate.

WC: Tell us about the piece you are working on…
PW: I have three carvings on the go at the moment: an owl and mouse recently used as a demonstration piece; a pine martin which will be emerging from a natural hole; and a replacement handle in pear (Pyrus communis) wood for a valuable silver teapot for a regular client.

WC: Name one thing on your carving ‘to do’ list…
PW: To carve an African figure from a large block of mahogany (Khaya ivorensis) that I was given years ago.

WC: If you could have one piece of equipment, what would it be?
PW: The bandsaw is already in, so perhaps the chainsaw that enables me to ‘rescue’ interesting logs and rough out carvings.

WC: Given one wish, what would it be?
PW: Reasonably good health to enable me to maintain the ability to be creative 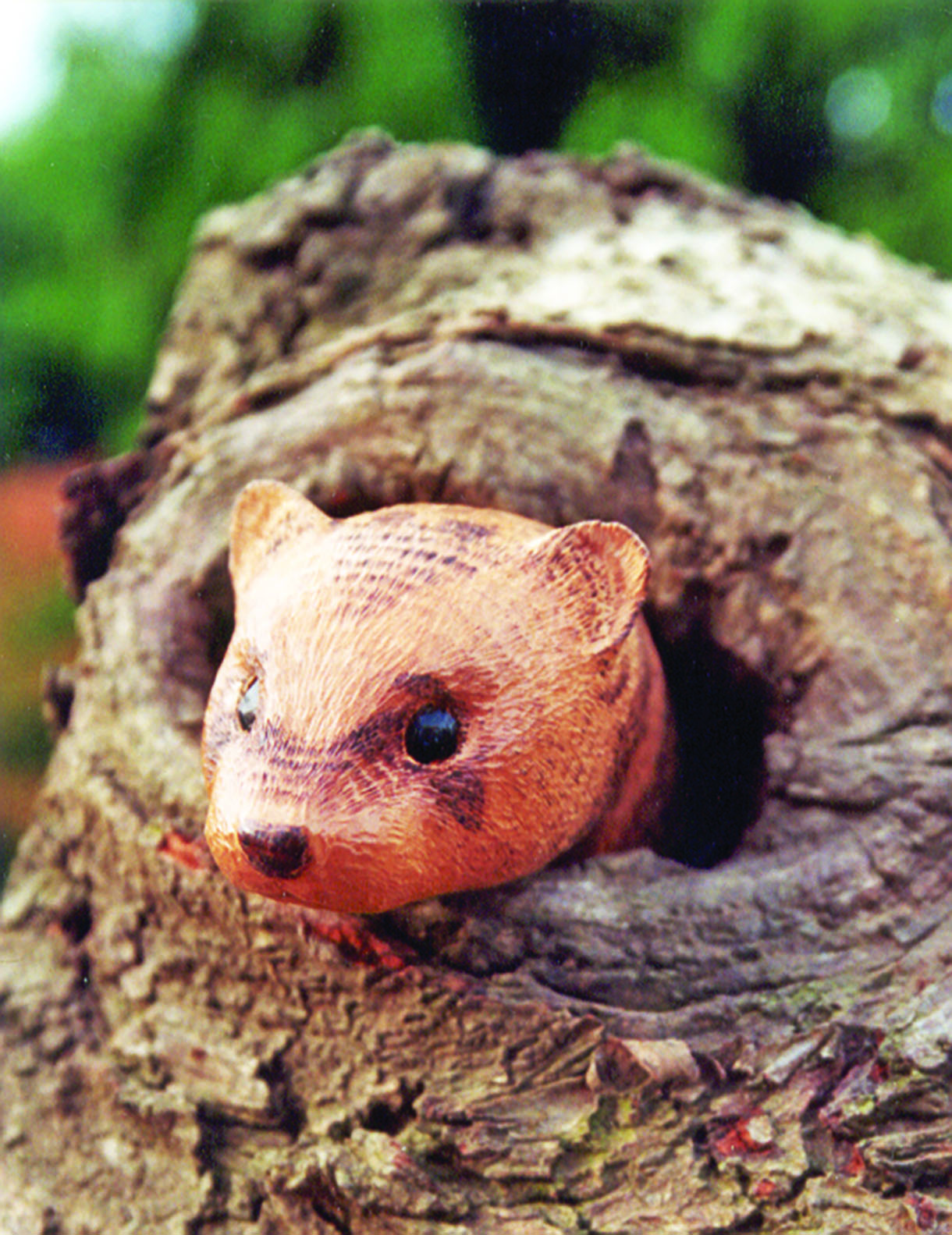 Ferret emerging from a tree stump 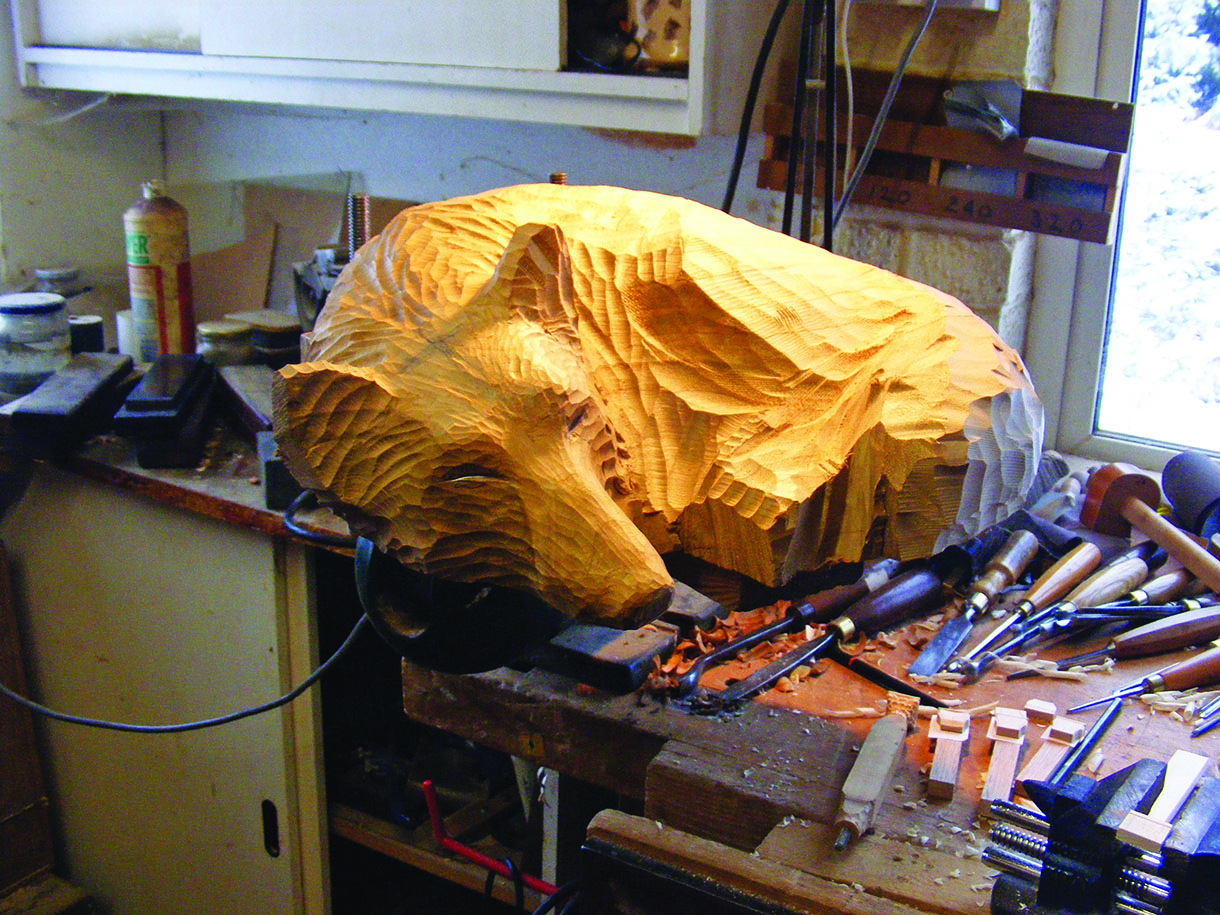 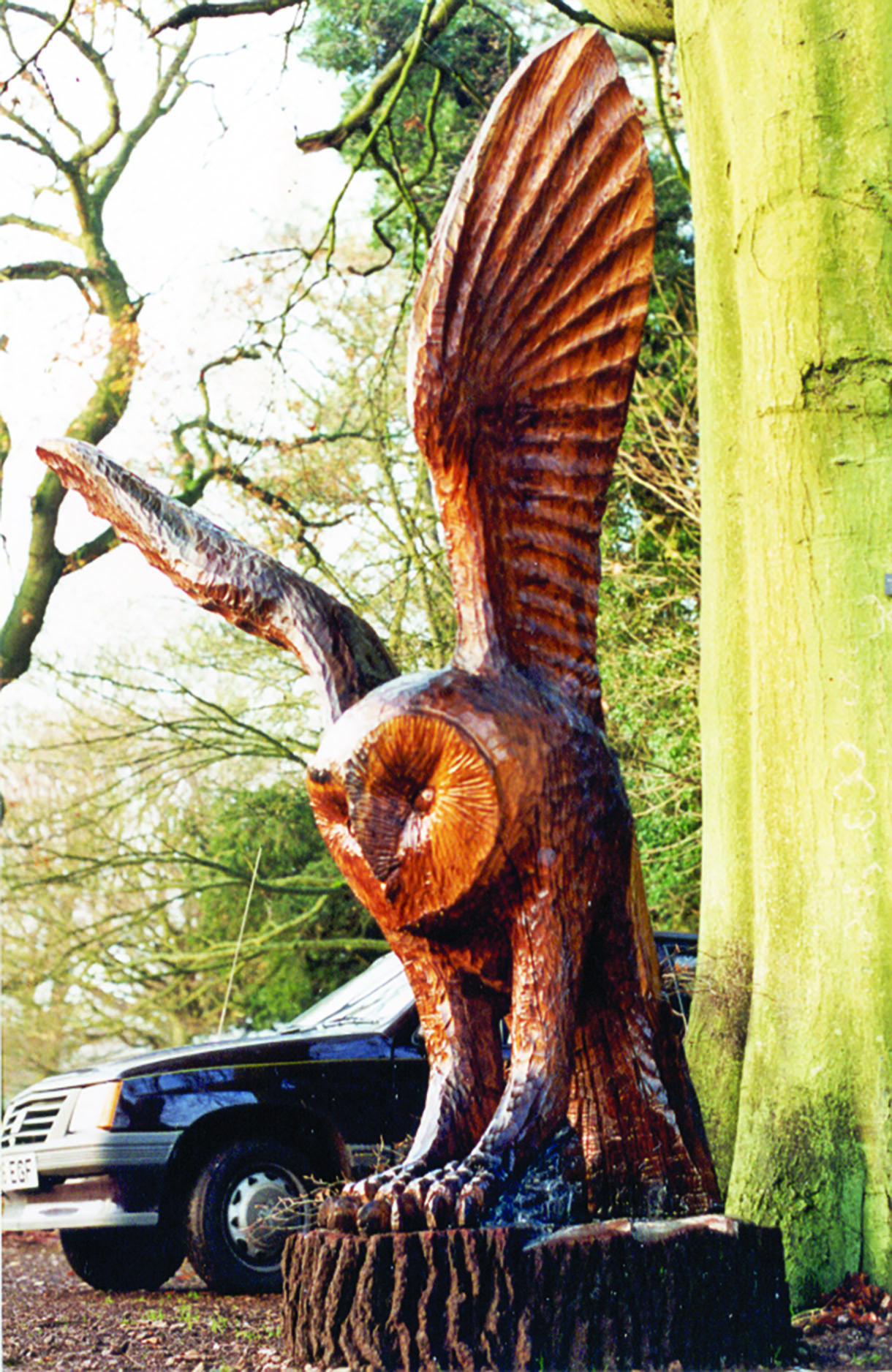 Likes and Dislikes
Likes
• The feeling of producing a clean cut with a sharp tool
• Putting down the power tool and picking up gouge and mallet
• Exploring the beauty of timber other than lime (Tilia vulgaris)
• Applying oil to a finished piece and seeing the colour emerge
• The expression on a client’s face when they see their commissioned piece for the first time – that is when I have got it right!
Dislikes
• Carving ebony (Diospyros spp.), hard, brittle and black dust everywhere
• Carving a large number of items the same if each one is fairly complex
• Noise and dust from machinery
• The intermediate stage of a carving when it has become recognisable but you realise how much work there is still to do
• The client who wants something similar to an existing attractive design but wants the proportions changed. Never satisfactory!