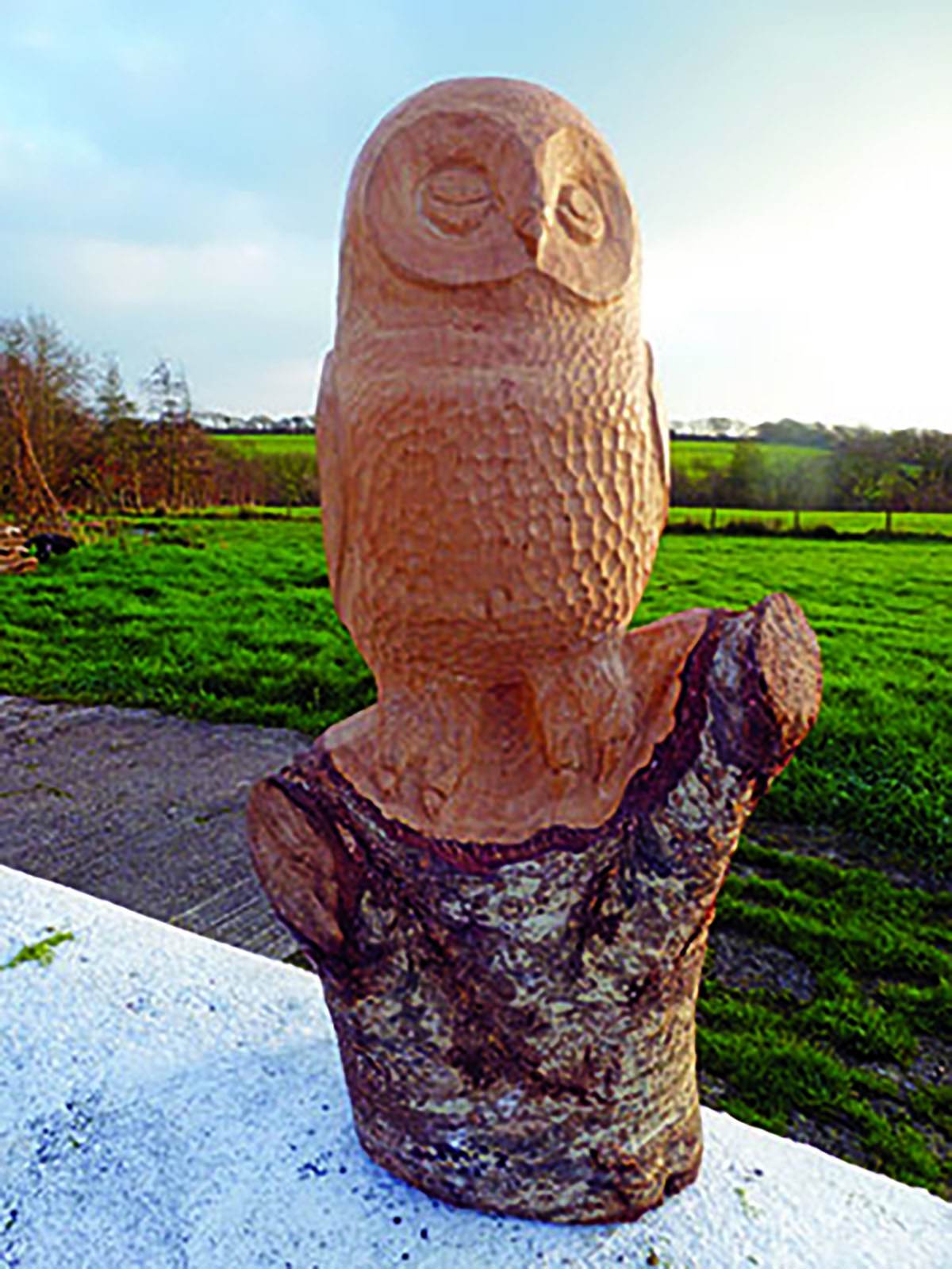 Zoe Gertner carves an owl from an alder log

Like a stale bread roll, the longer you keep your carving timber, the harder it gets, and when wood is hard, it takes longer to carve. But when can you use it? Some of the alder (Alnus glutinosa) trees we planted some years ago were felled last spring, producing logs up to 405mm diameter. We stored them leaning on one edge vertically, utilising gravity to drain down moisture and reduce shakes and cracking while they dry. Experts tell us ‘seasoning should take a year for each inch of thickness’ – that could be a long time! Carving green wood is much quicker because the timber, though moisture laden, is soft, so why not make the carving first, then ‘season’ it, instead? Here’s how it’s done. 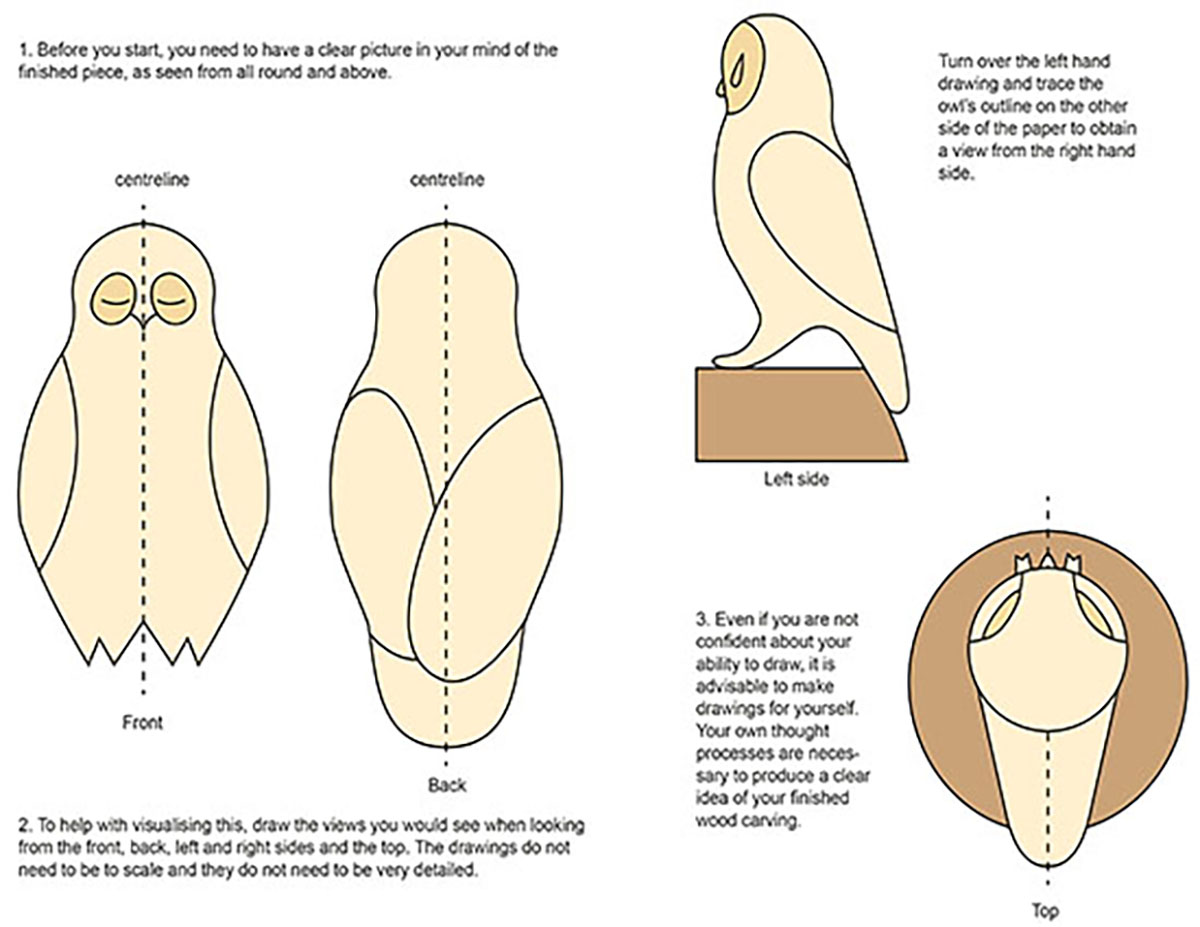 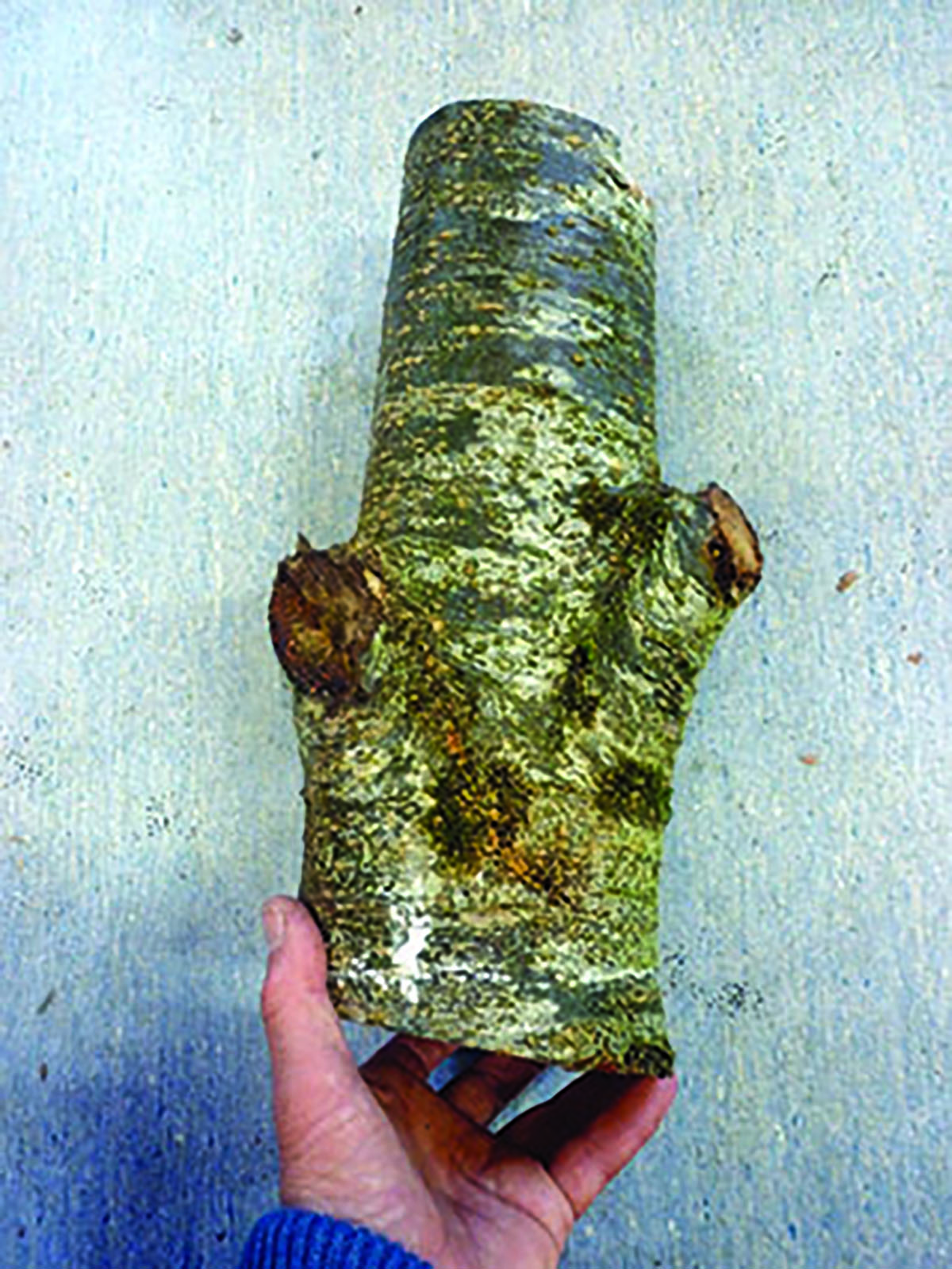 1: Firstly, shorten any side branches and cut a piece of alder that is approximately 255mm long and 125mm in diameter. Flatten the base, retaining the bark Shaping the owl 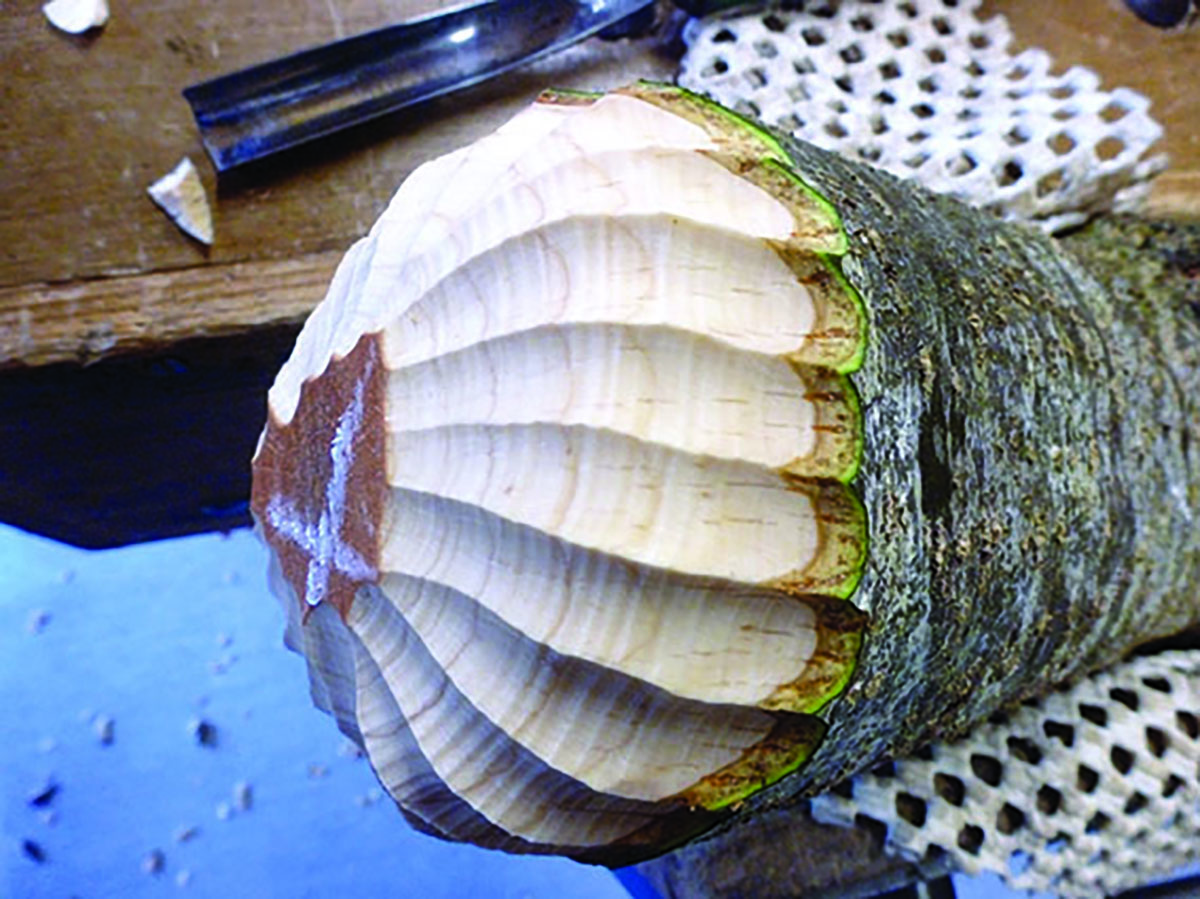 2: Round over the top using a No.9, 16mm gouge. Aim the cuts towards the centre – marked ‘X’ – lifting your gouge hand at the sawn edge. Save the chips produced and bed your carving in them between carving sessions, they have the same moisture content and will prevent your work drying out too quickly. Make sure you wipe your tools dry after use. Extend your cuts, reducing their depth to remove the sawn surface at the highest point 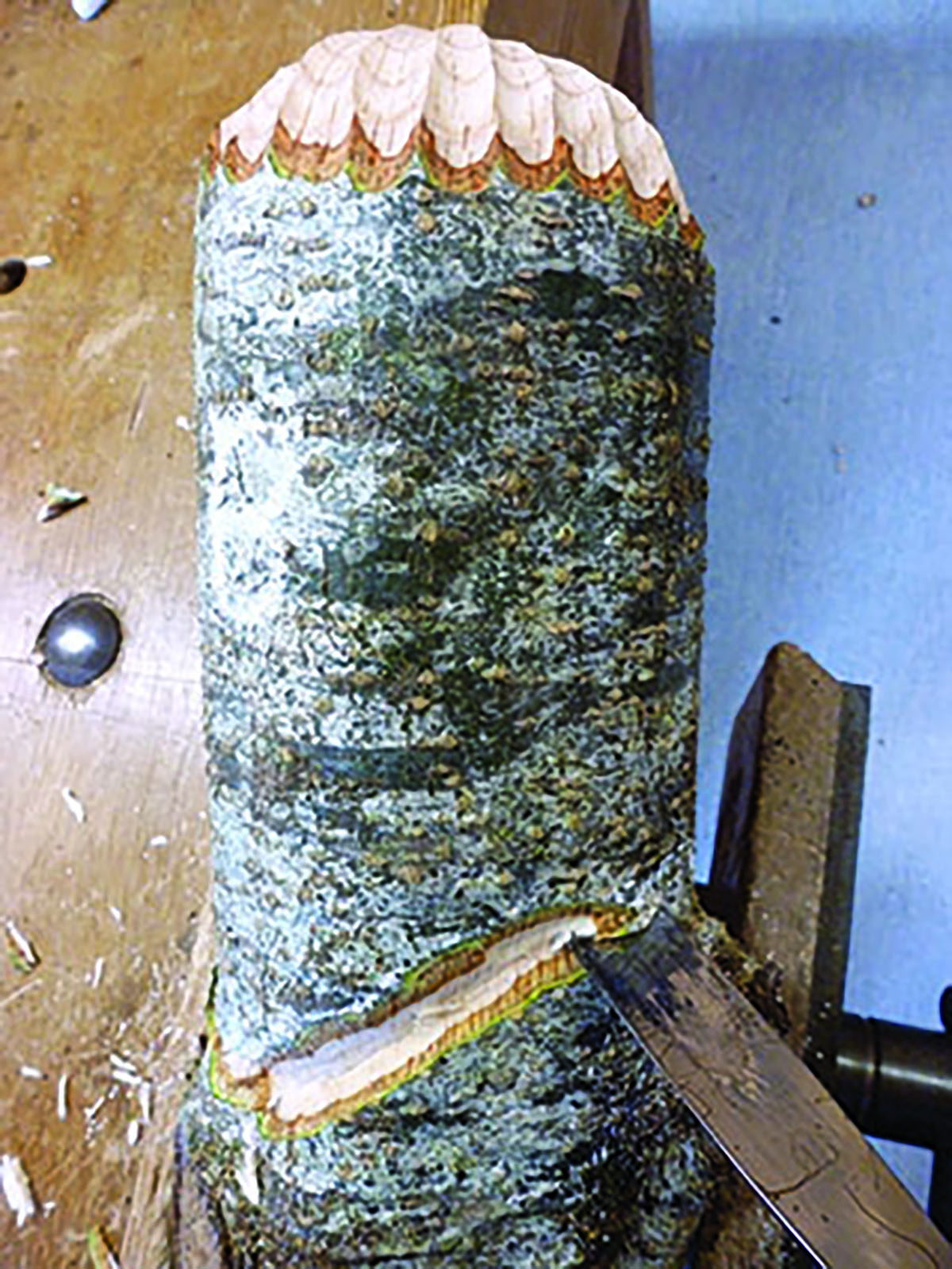 3: Using the No.3, 16mm gouge with opposing cuts, make a ‘V’ channel outlining the tail. Then, continue the ‘V’ channel around the sides to meet up at the front around both feet 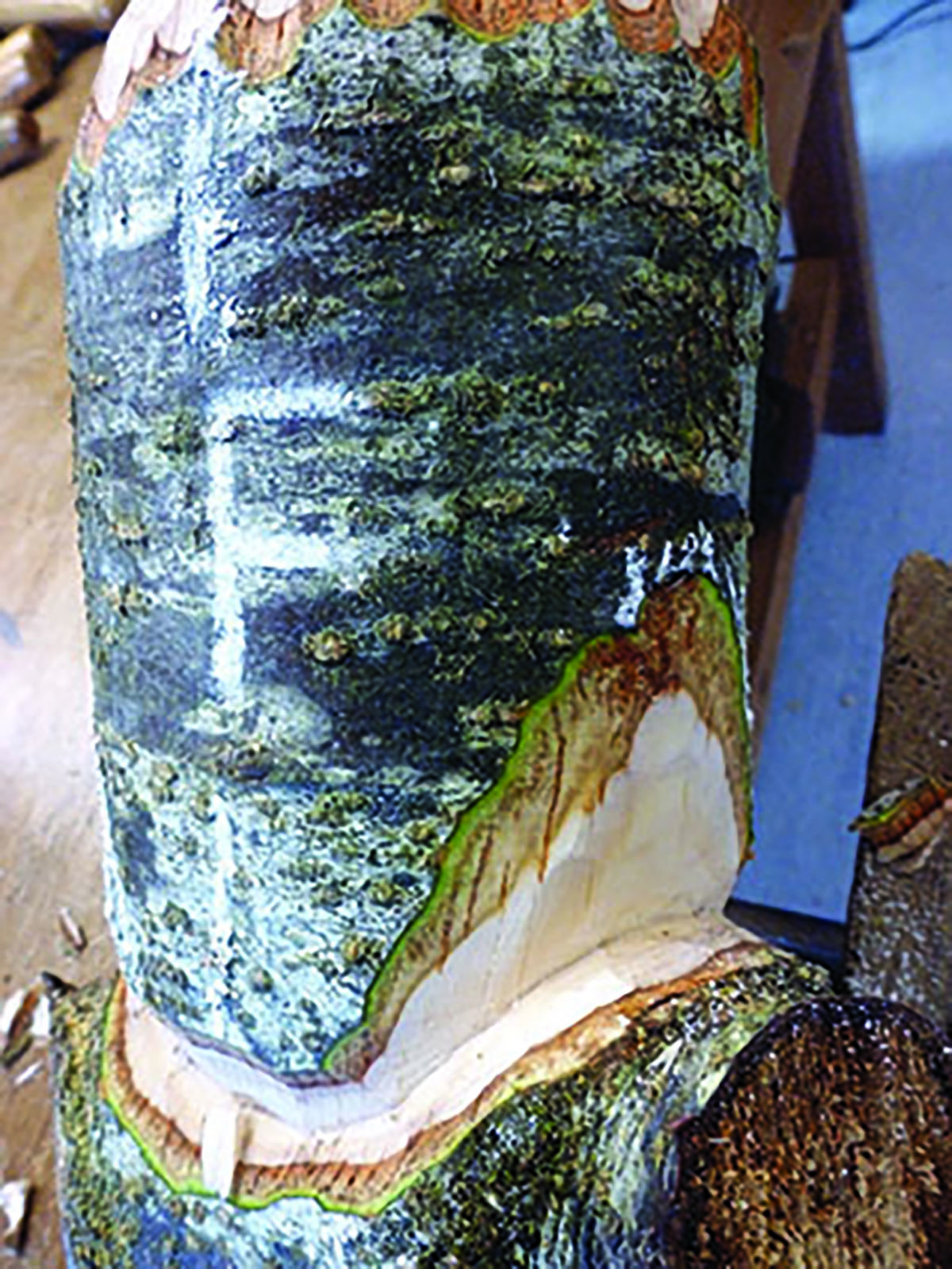 4: Draw the centreline on the front. Extend the cuts from midway down each side into the ‘V’ channel, tapering them into the bottom of the channel 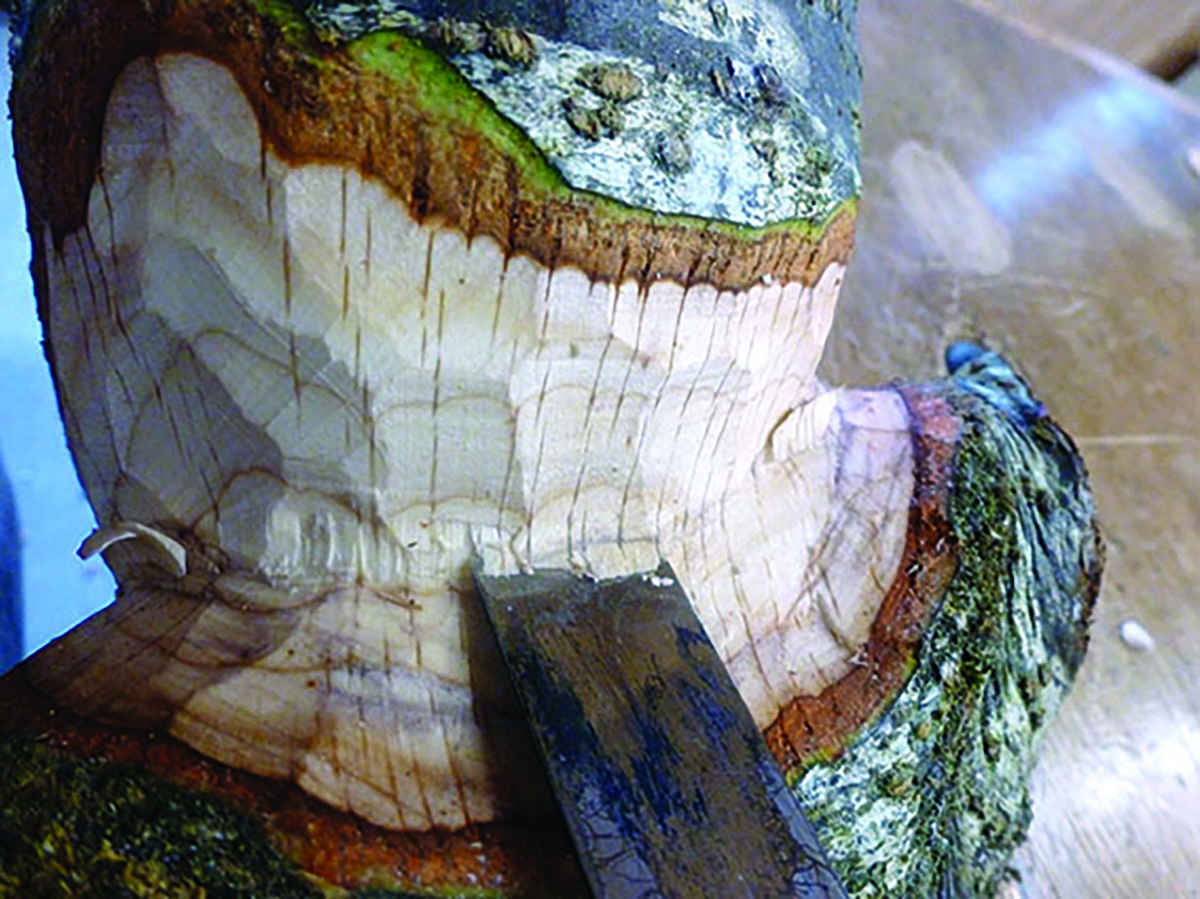 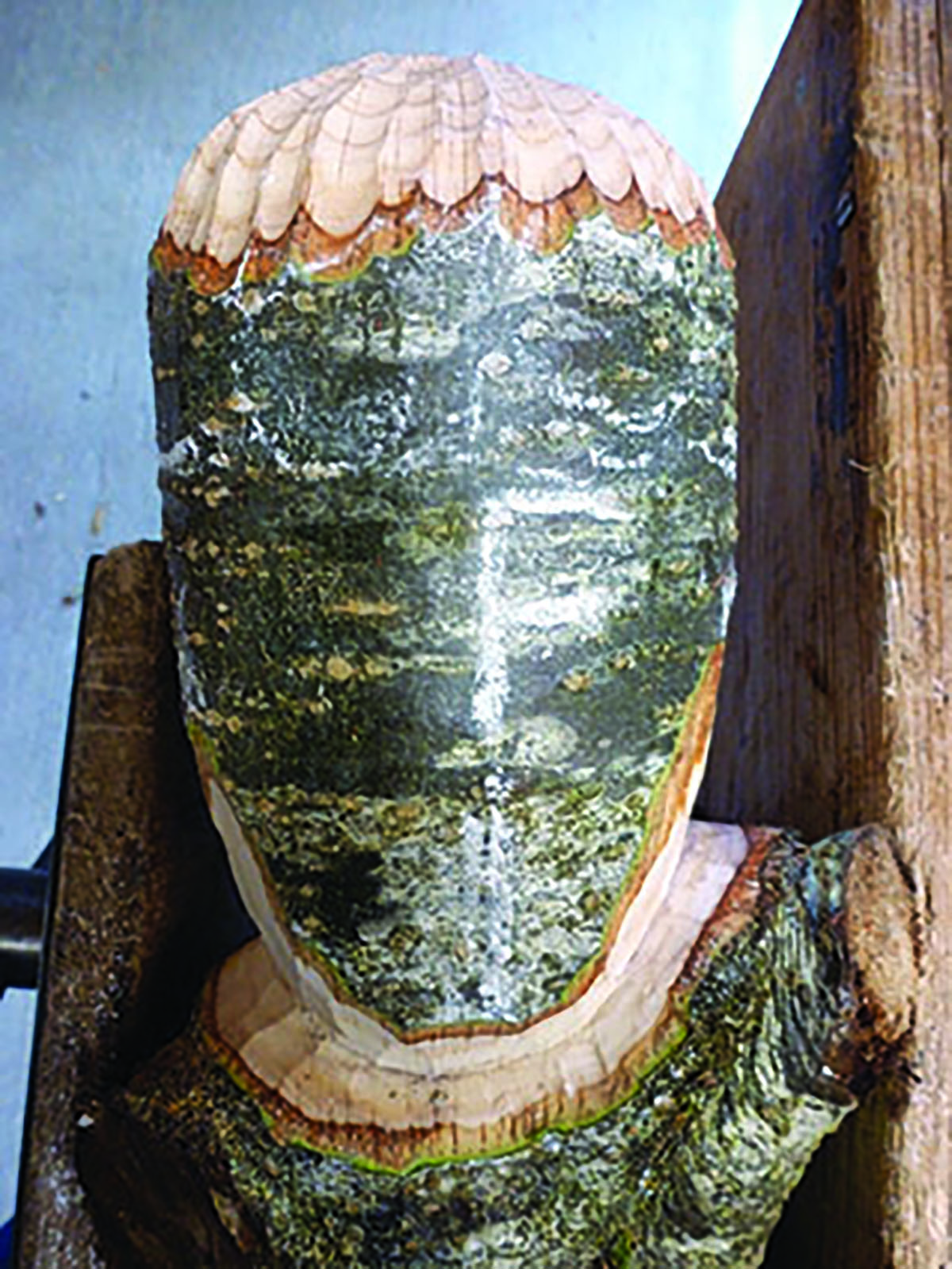 6: Repeat cutting the ‘V’ channels and tapering both sides until your owl is on its perch Head, tail and wings 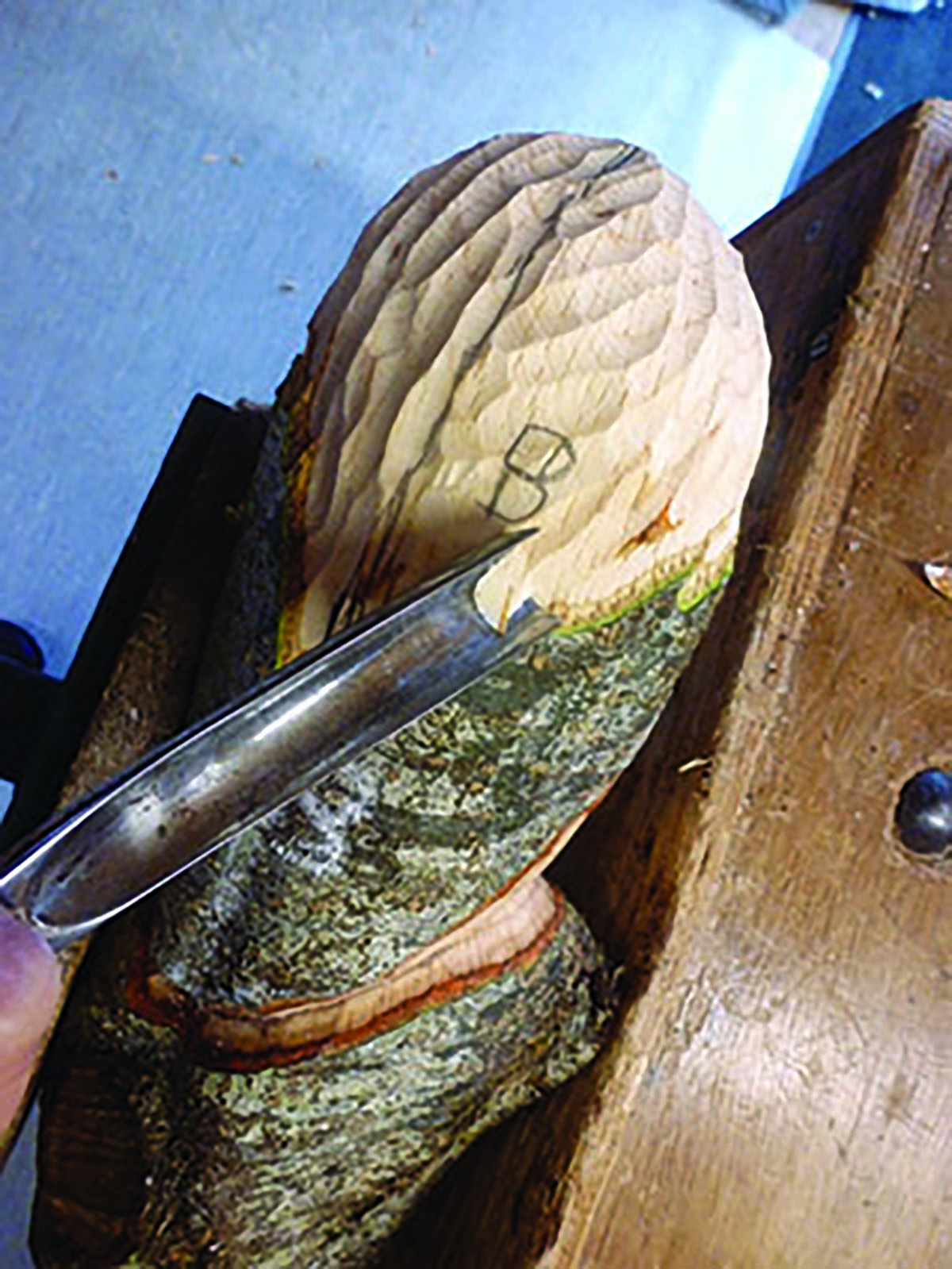 7: With the No.9, 16mm gouge, reduce the circumference of the head above the top of the wings, extending the cuts behind the head and sloping the back of the owl. Use curving cuts around the sides of the head to round it 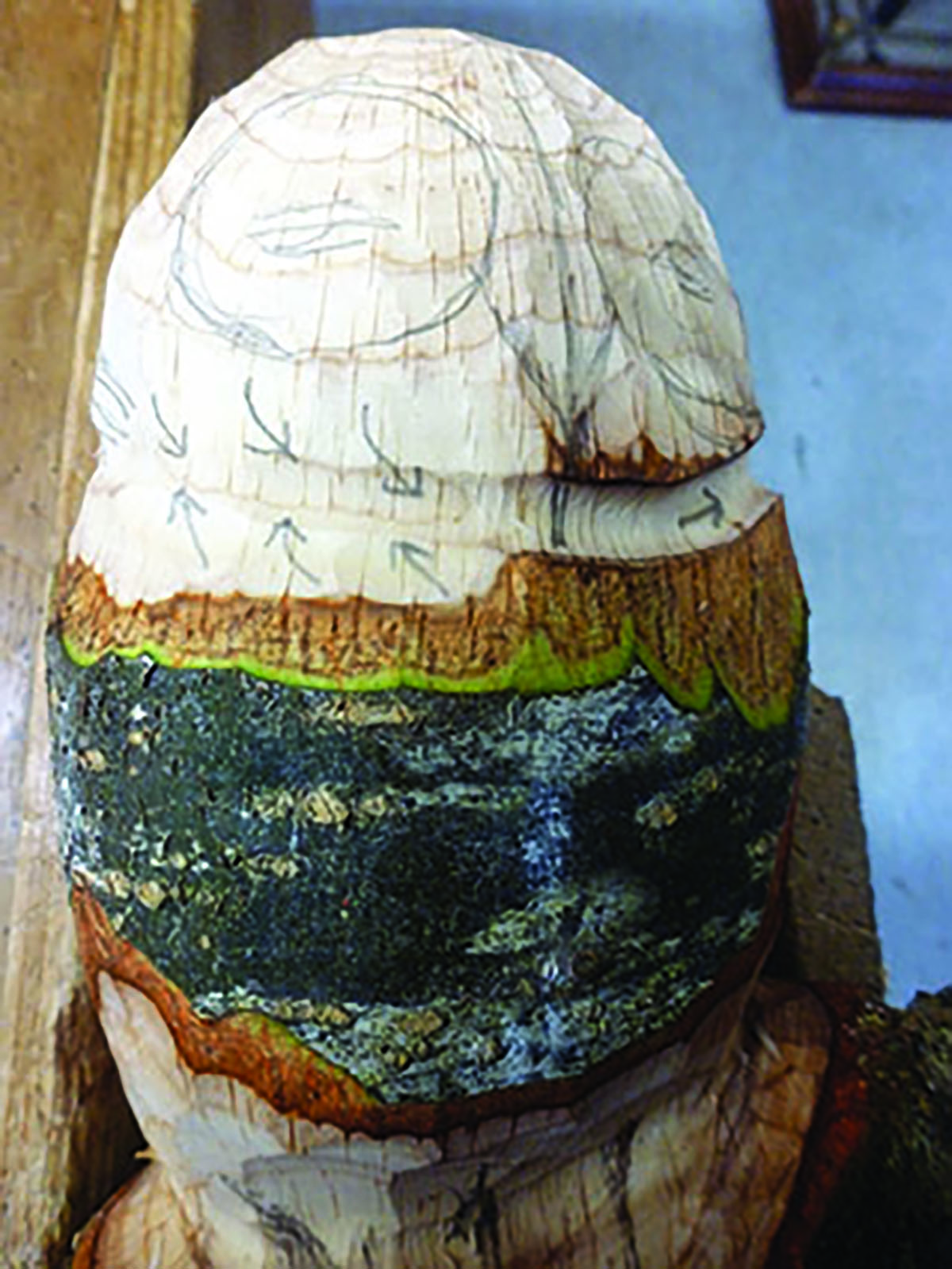 8: Angle each eye disc away from the centreline and flatten them with the No.3, 12mm gouge.
Cut a groove beneath the head with the No.9, 16mm gouge, diminishing its depth at the top of the wings on each side. Cut into the groove from each side and continue reducing the size of the head until the tops of the wings are prominent when viewed from the front 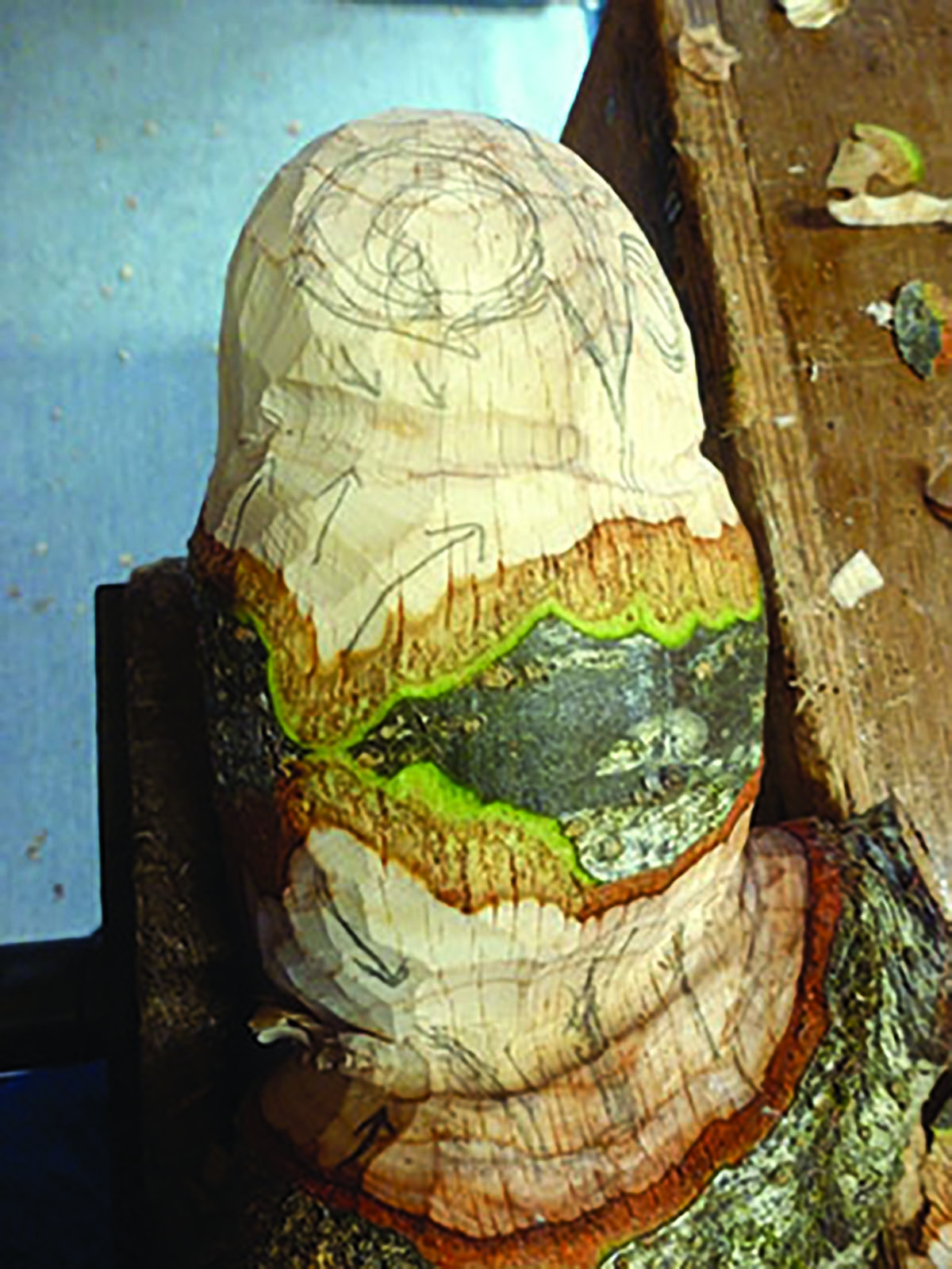 9: You can then begin to gradually remove the bark, and, using the No.5, 12mm gouge, round over the breast into the neck and into the upper surface of the legs, making it prominent when seen from the side 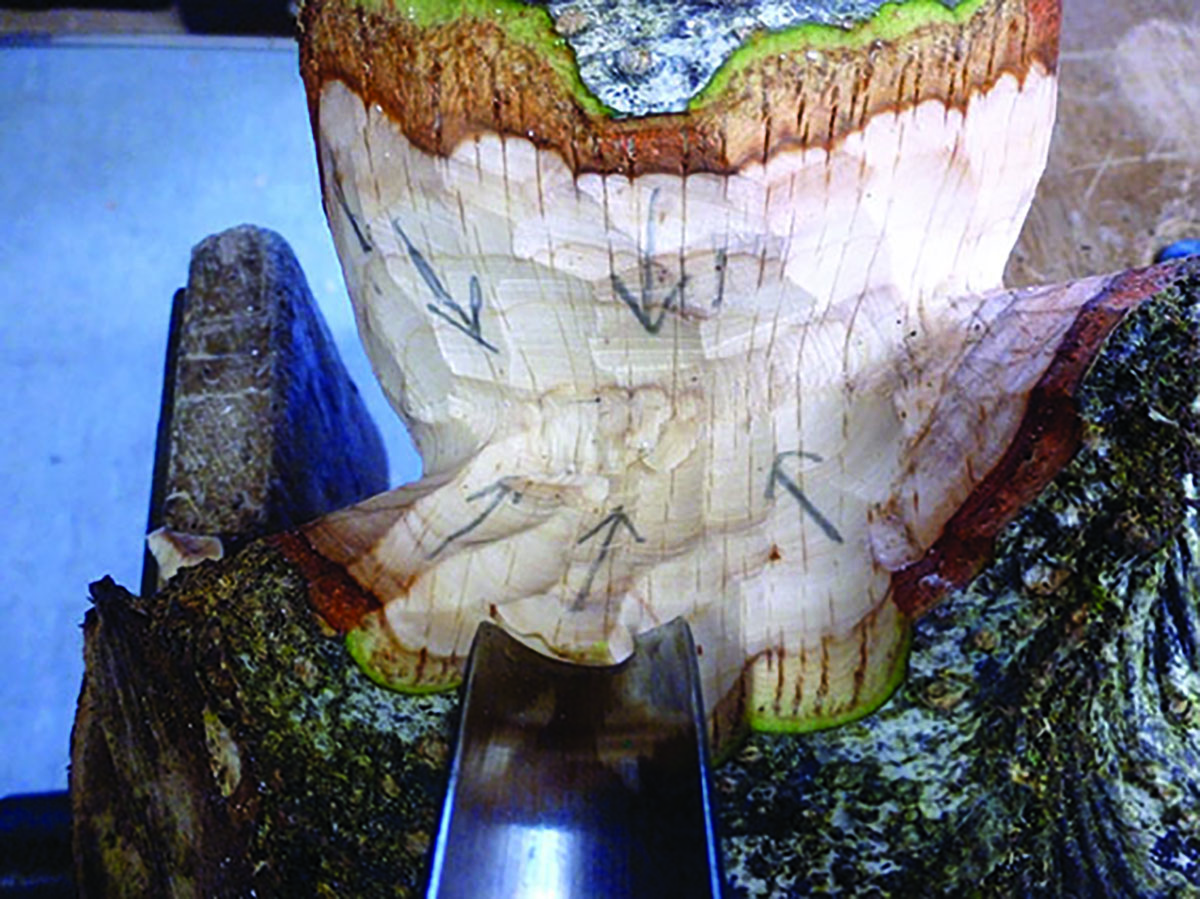 10: Reduce the ends of the toes with the No.9 gouge, slope the surface ready for the feet and legs, and merge the legs into the underneath of the body 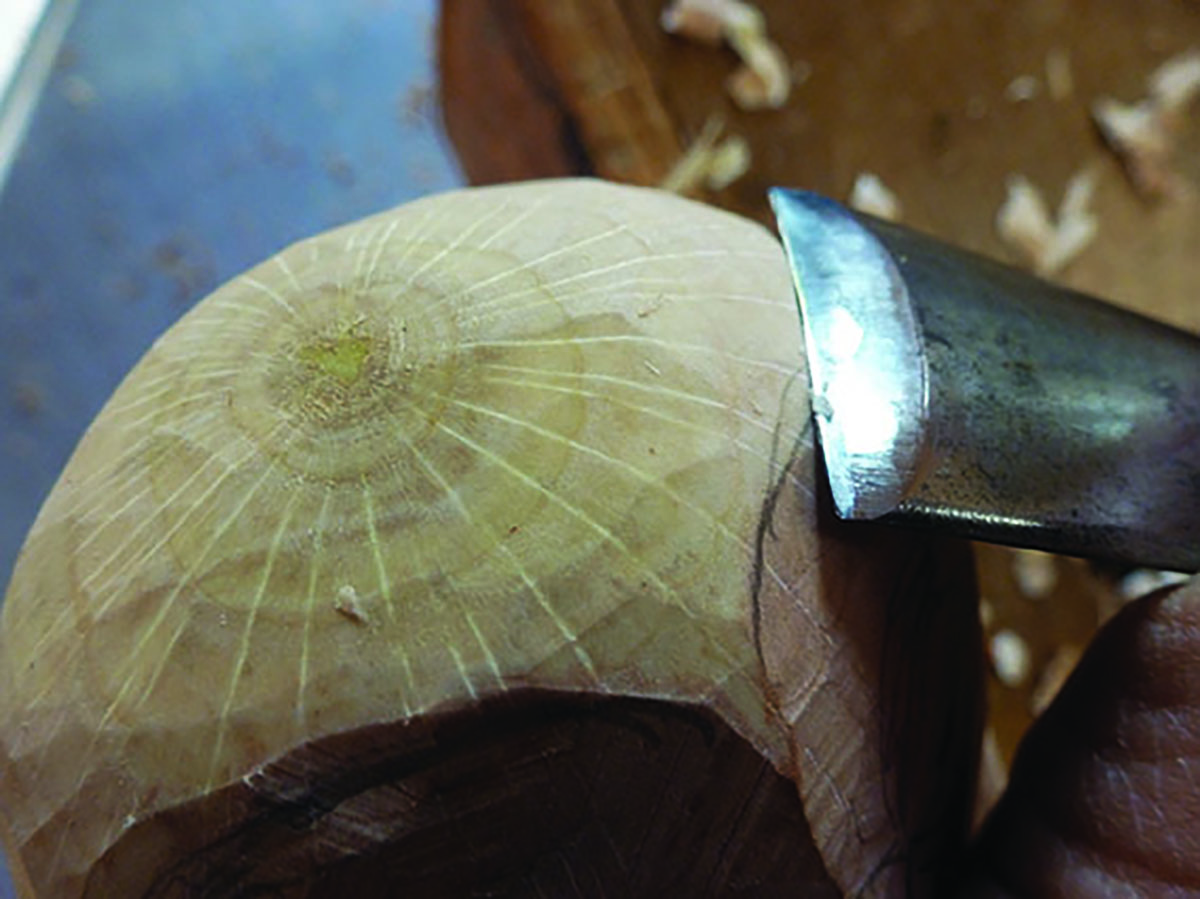 11: With a wide No.3 gouge inverted, pare the head and body smooth and flatten the head if it is too domed 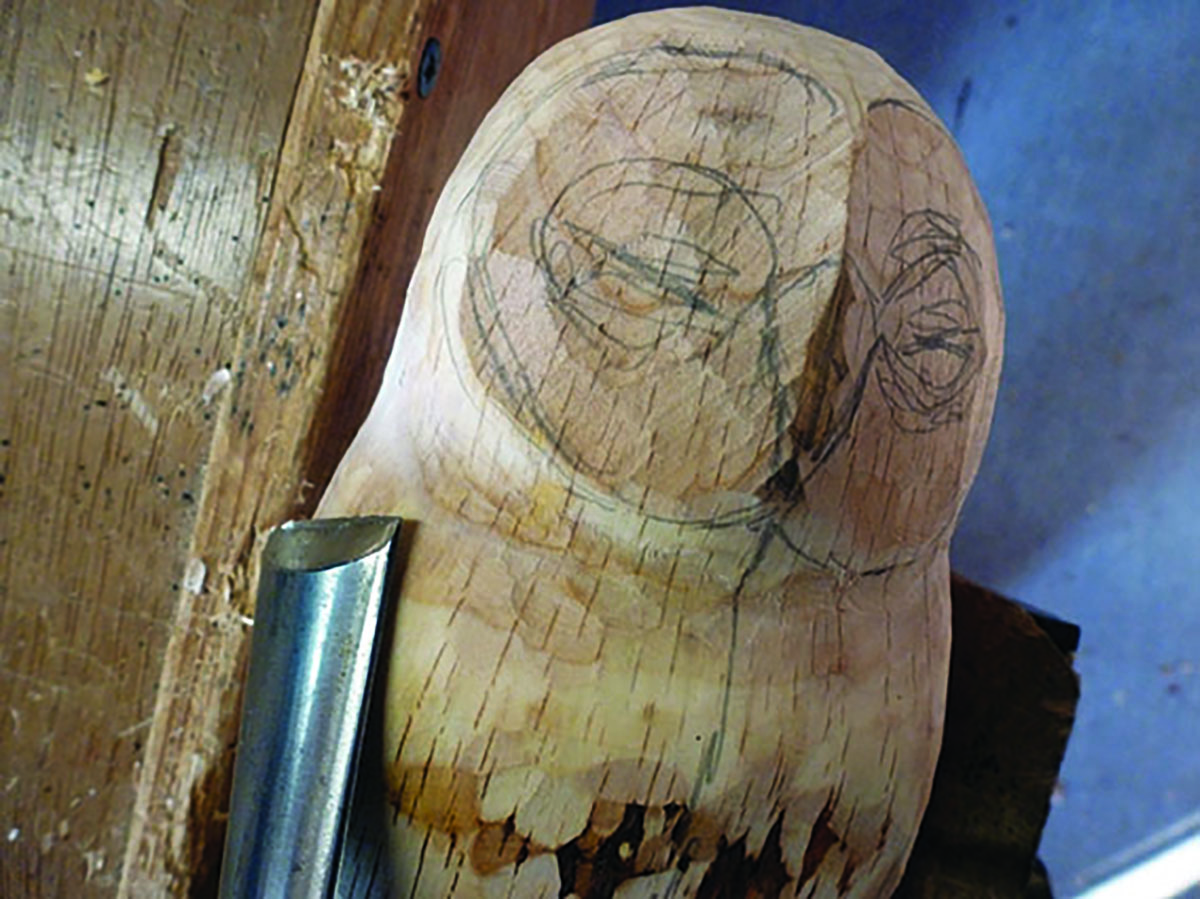 12: Working around the shape of the bird, push the cutting edge of the No.3 gouge forwards with a slicing action and pare the whole body smooth 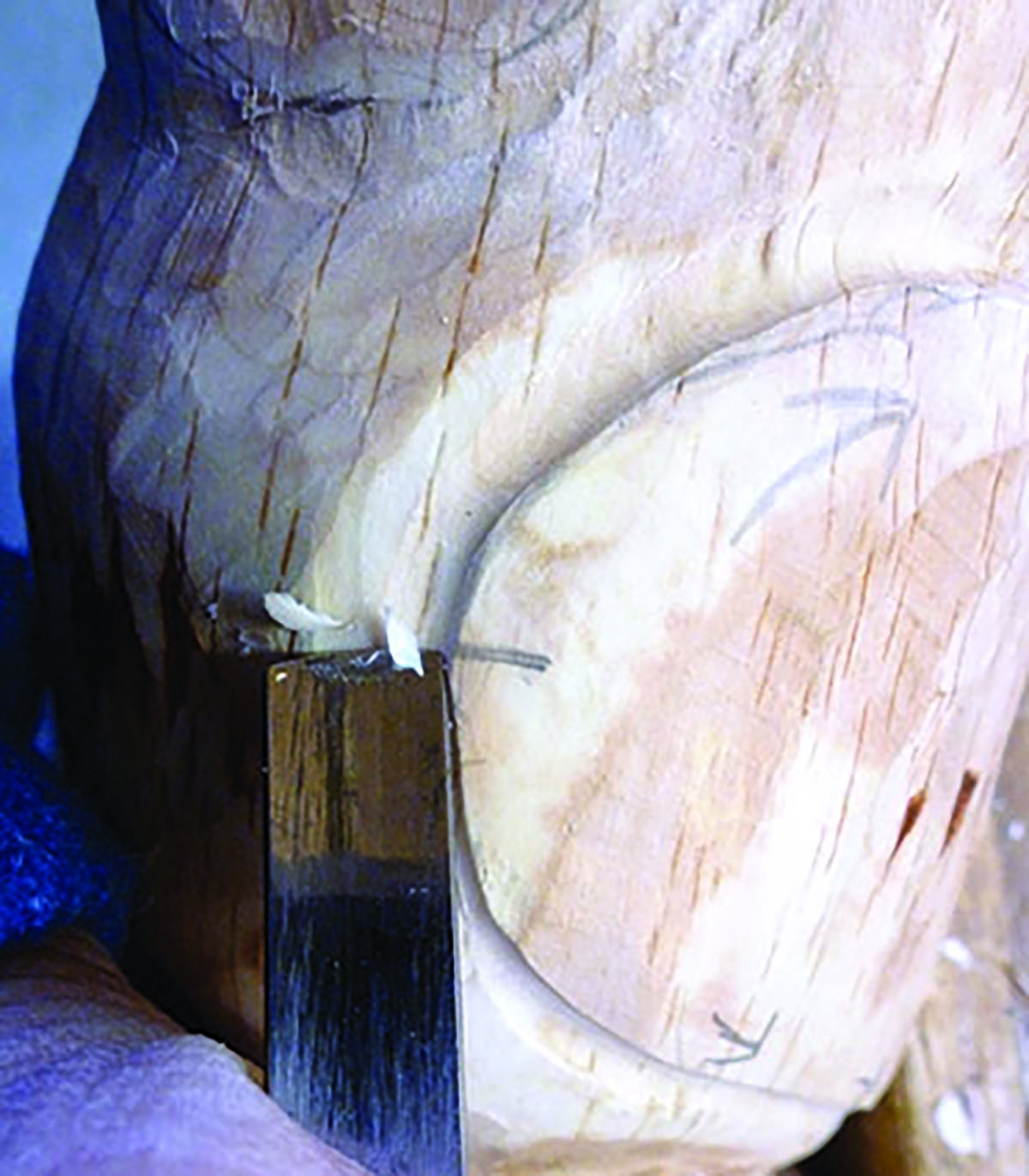 13: You can now start to outline the wings and sides of the tail using the No.9, 10mm gouge, cutting in the directions shown to avoid tearing the wood. Carefully pare away the outer edge of the grooves with the No.3 gouge to leave the tail and wings outlined with a concave edge 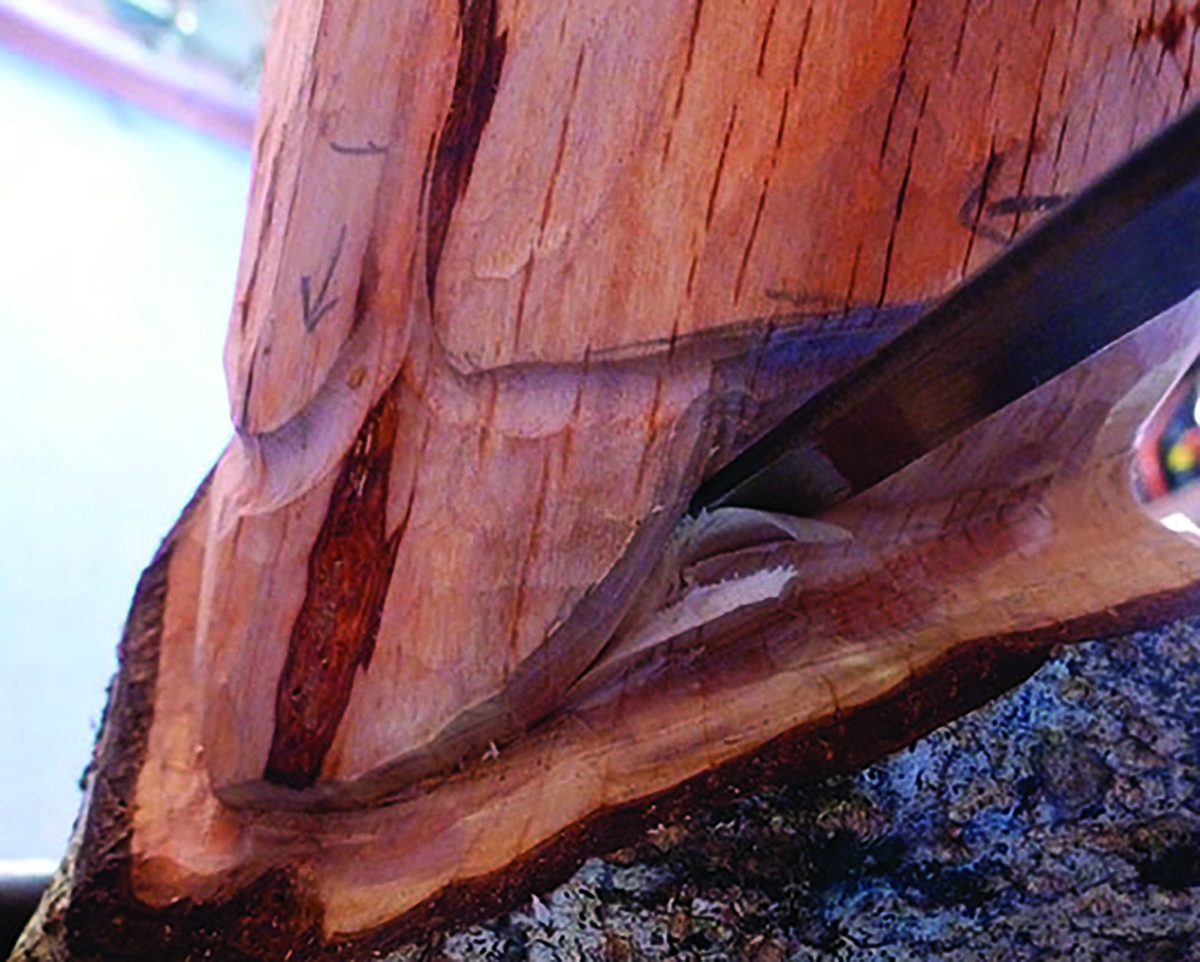 14: Then, alongside the tail and underneath the body on each side, hollow and undercut the triangular area up to the back of the legs 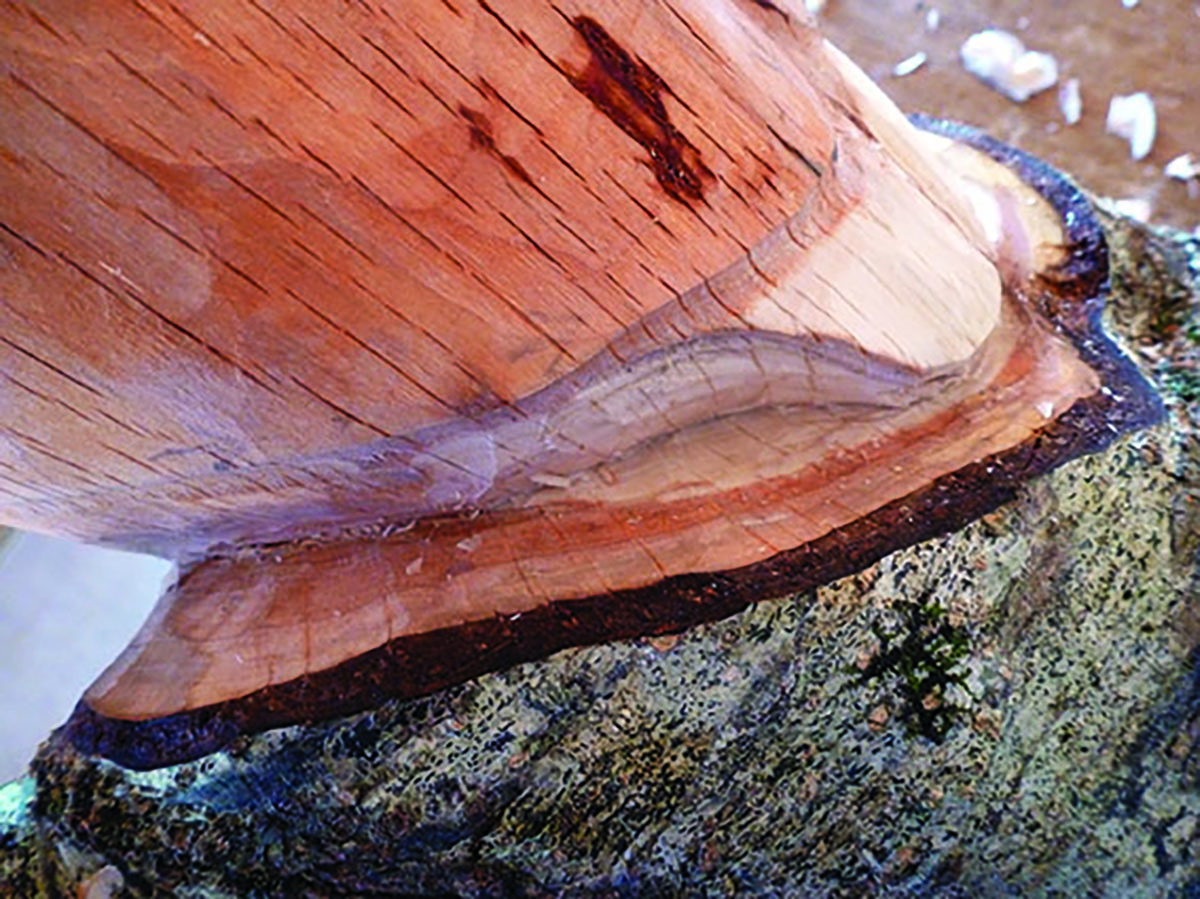 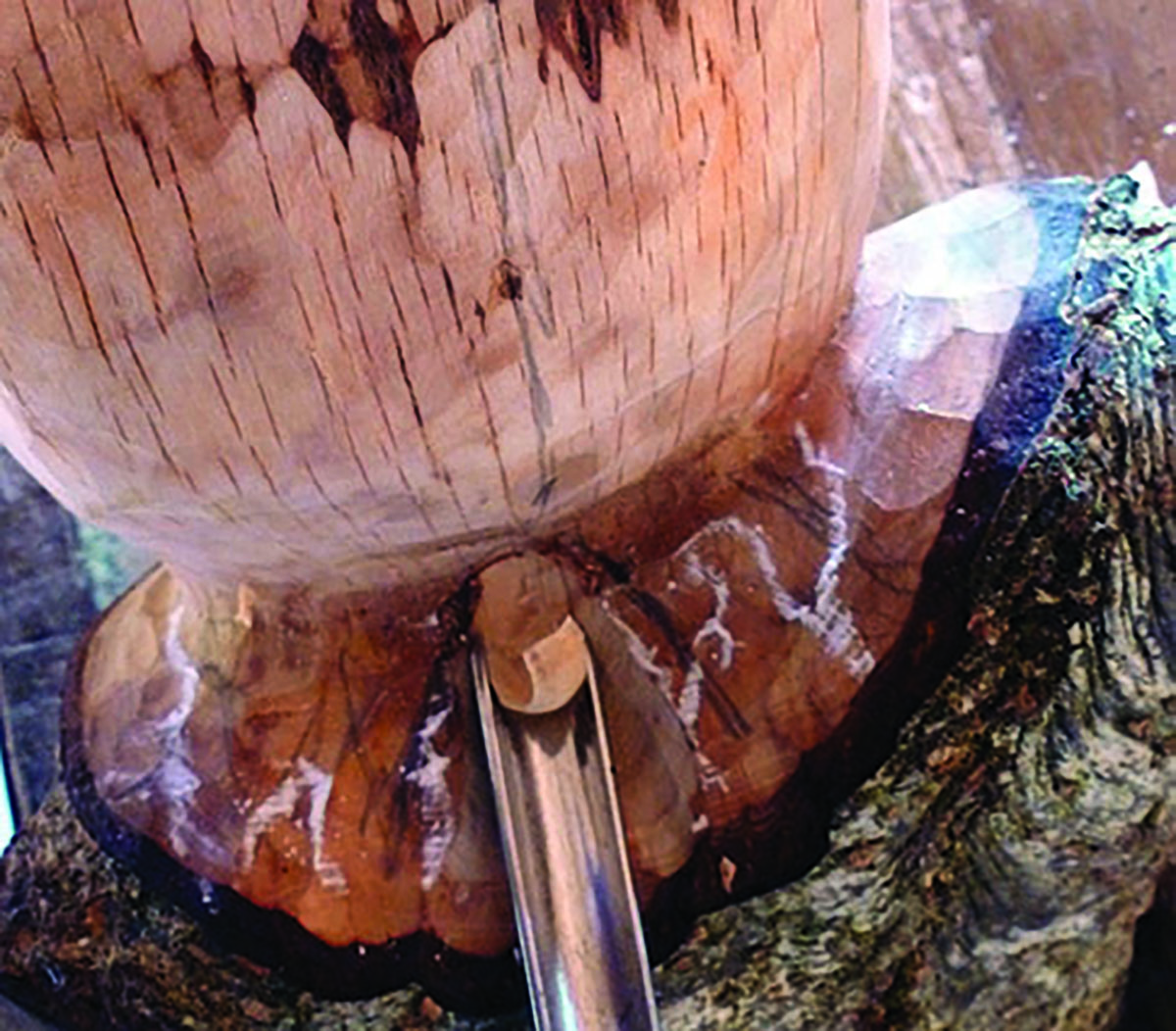 16: Draw the outline of the feet on the sloping surface, each with two pointed toes and talons. Remove the triangular area between the legs using the No.9, 6mm gouge and round over the inner edges between the feet. Once done, remove the outer edges of the feet around the back of the legs, merging into the undercarriage and tail on each side. Reduce and smooth the adjacent surface of the perch 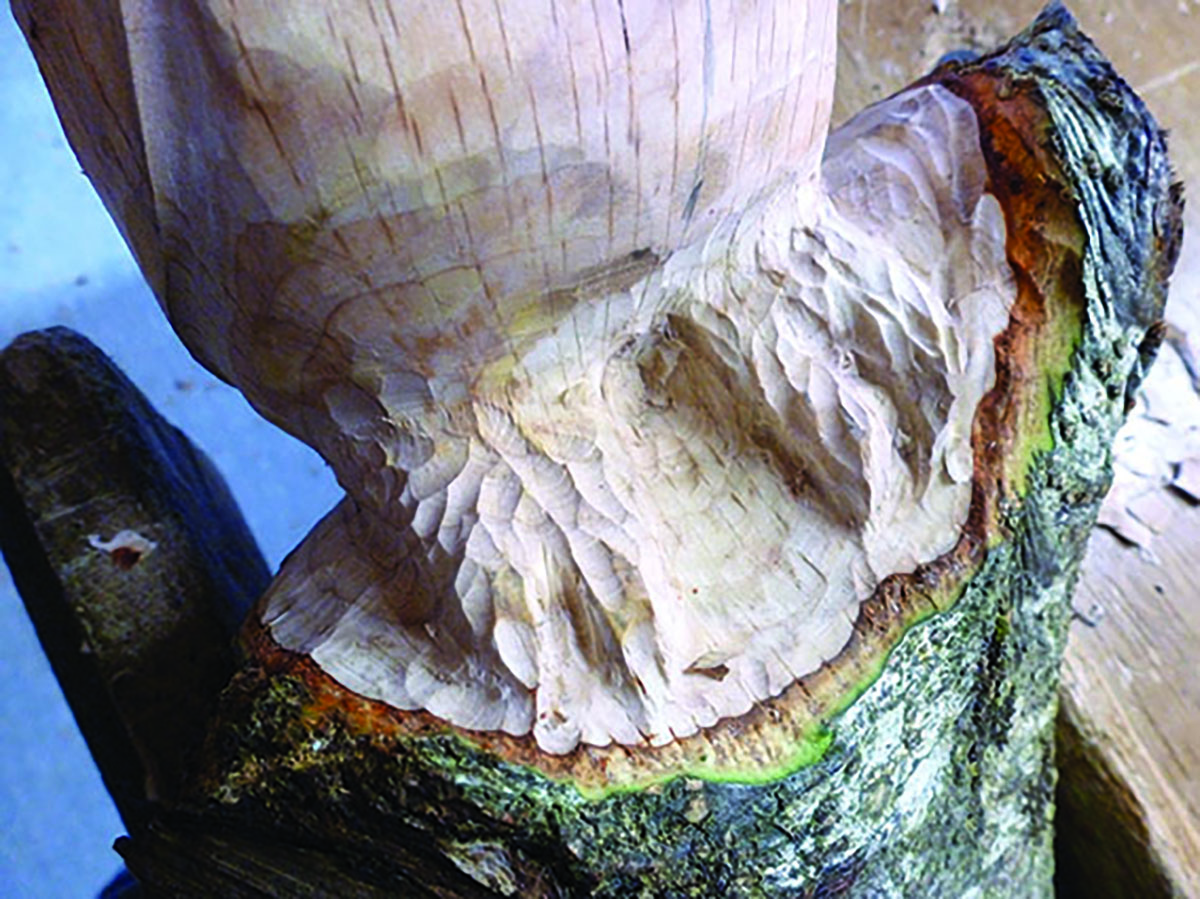 17: For each foot on the owl, you need to remove the triangular area between the two toes, which will allow you to separate them. Leave these tooled from the No.9 gouge, as this will give the impression of feathering 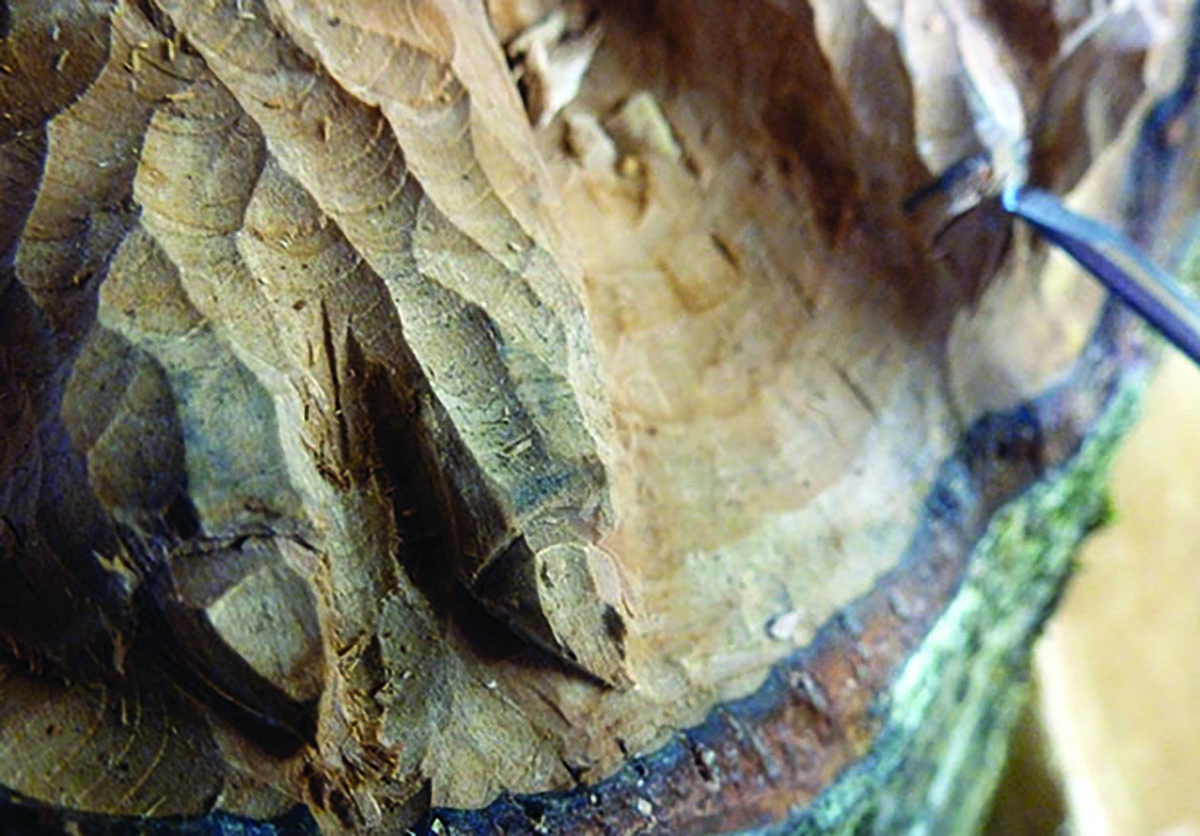 18: With the No.3, 6mm gouge, cut in the tops of the talons by rolling its cutting edge over the toe from each side to form a ‘V’ channel. Then reduce the surface of the talons, shaping the ends to sharp points 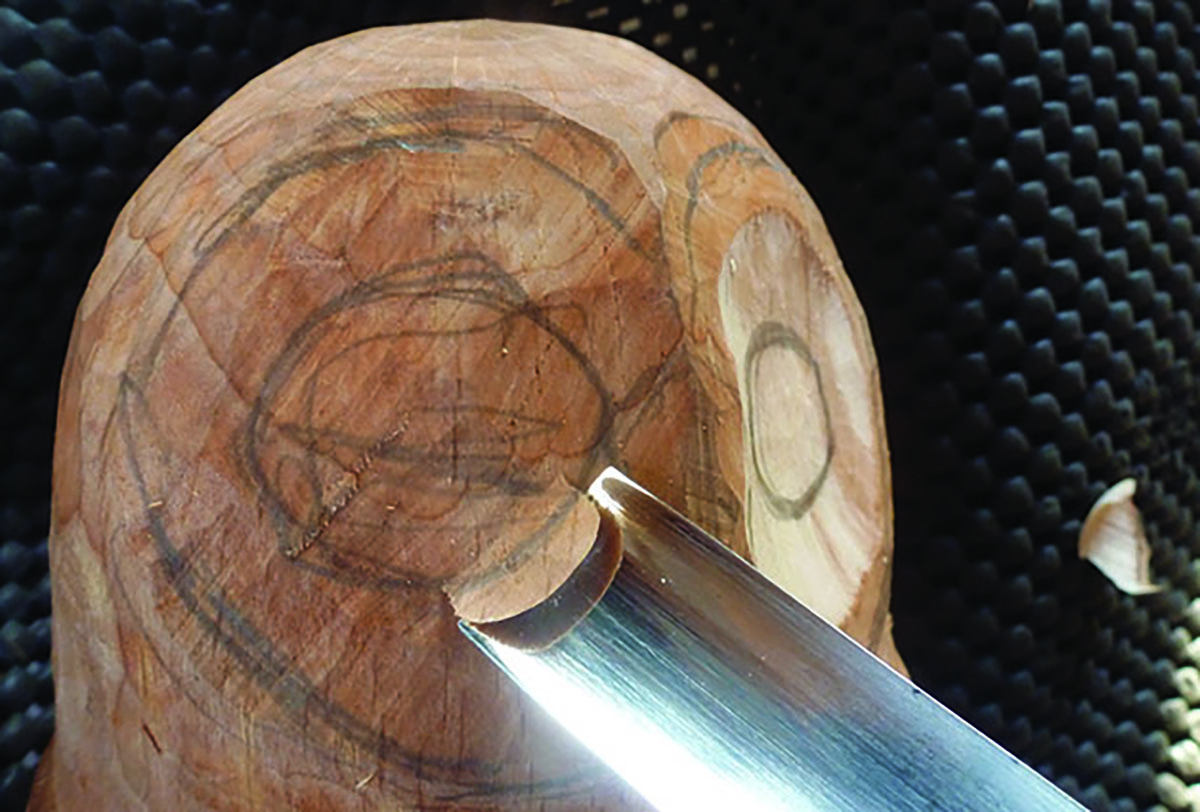 19: Use the No.5, 12mm gouge to hollow the eye discs so that they are angled away from each other. Ensure you retain the sharp ridge along the centreline between them 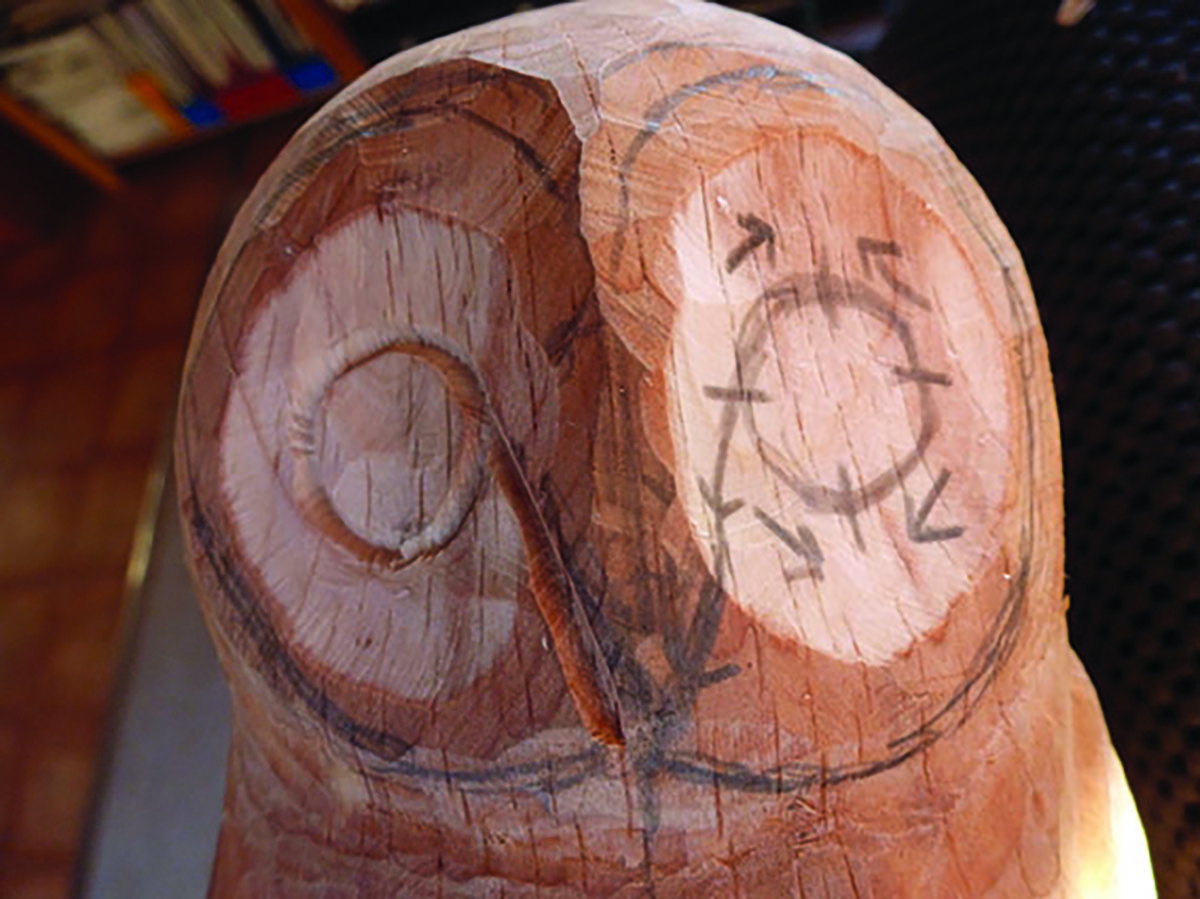 20: Cutting in the directions shown, you can then mark the eyes and beak with the 3mm 60° ‘V’ tool 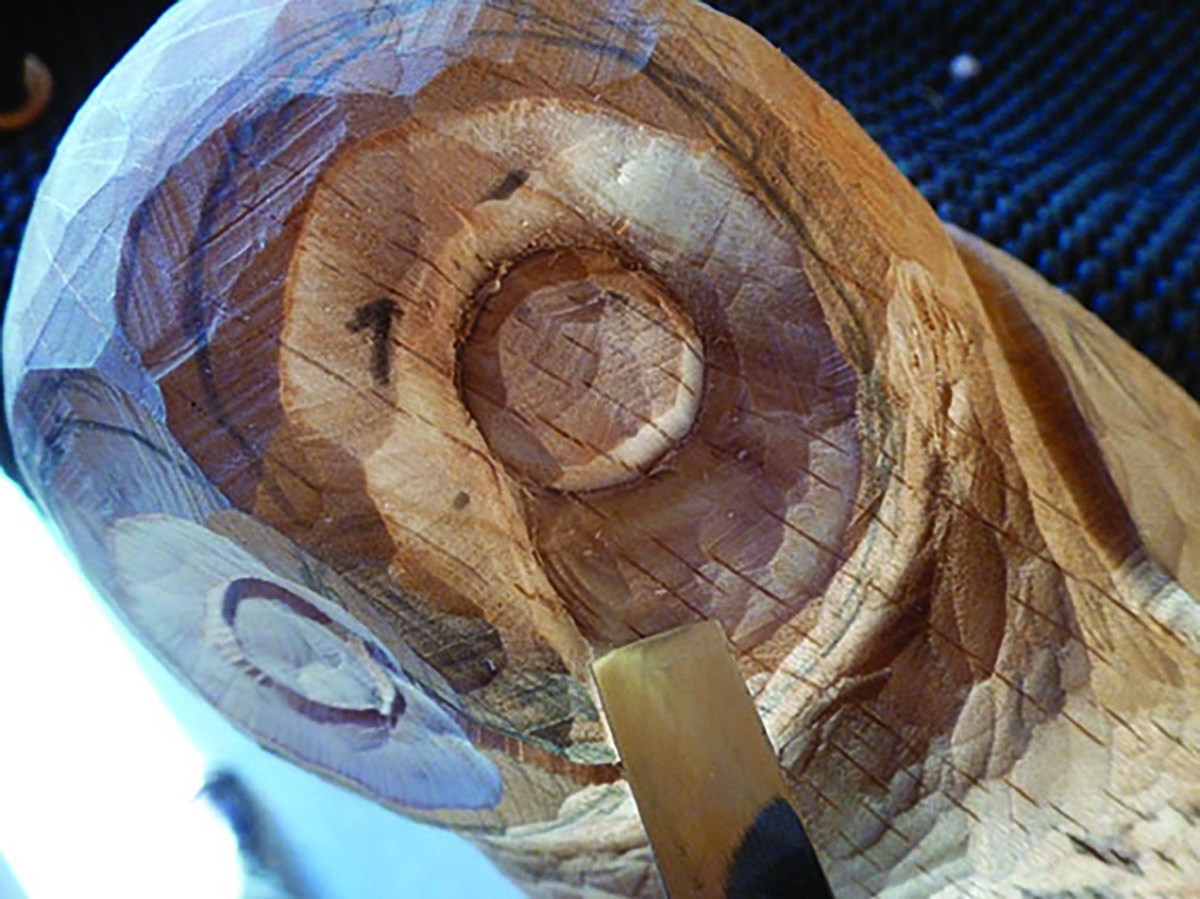 21: Relieve the eyes using the No.3, 6mm gouge and deepen the hollow adjacent to the beak and below each eye, retaining the apex between the two eye discs 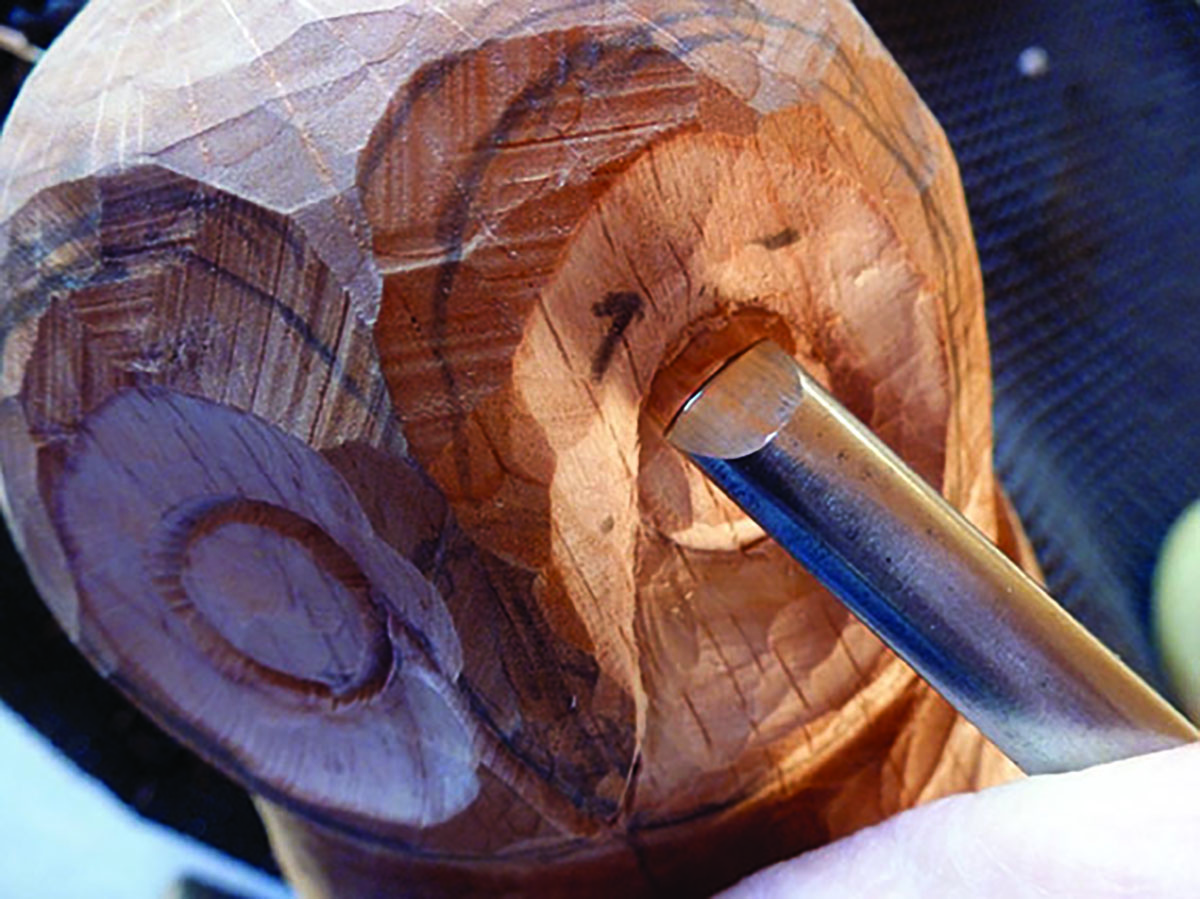 22: Invert the No.3 gouge and round over the edges of the eyes. If your owl is to be asleep, make a curving V channel over the eye for the edge of the lid 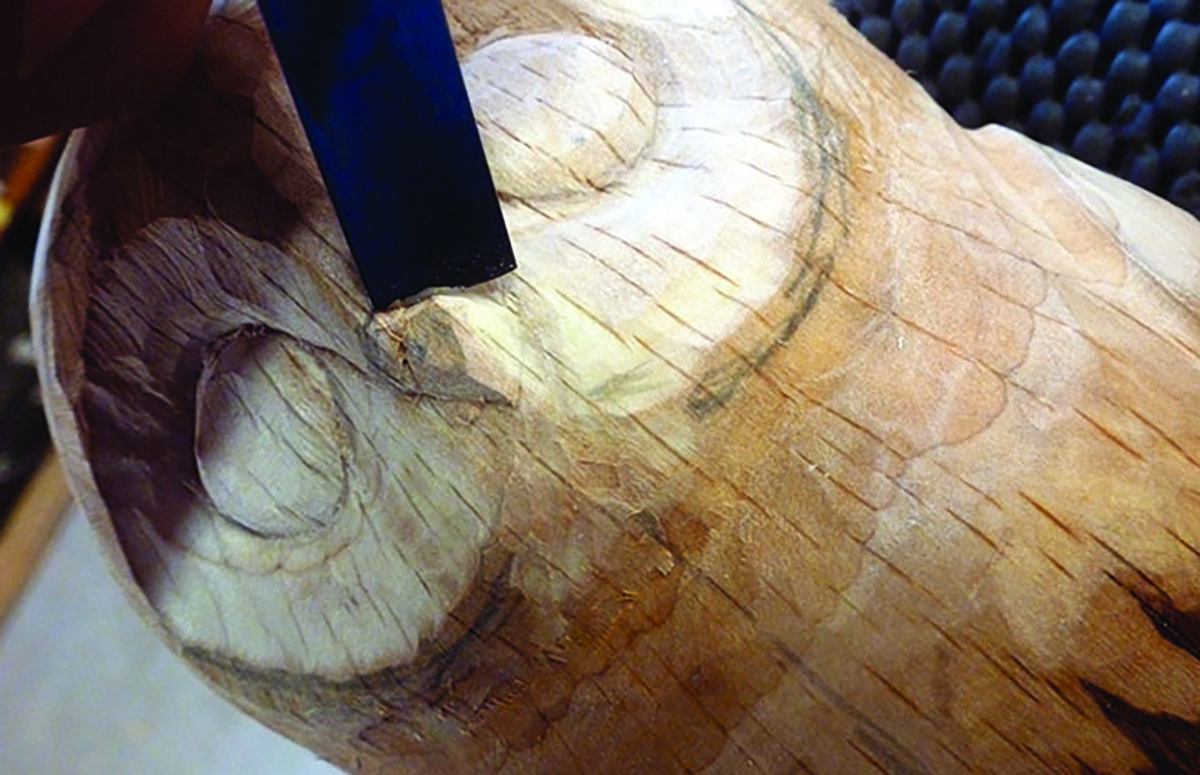 23: Cut in the top of the beak by rolling the No.3, 6mm gouge over the ridge from each side to form a shallow V channel, and retaining the apex, shorten and taper it to a point 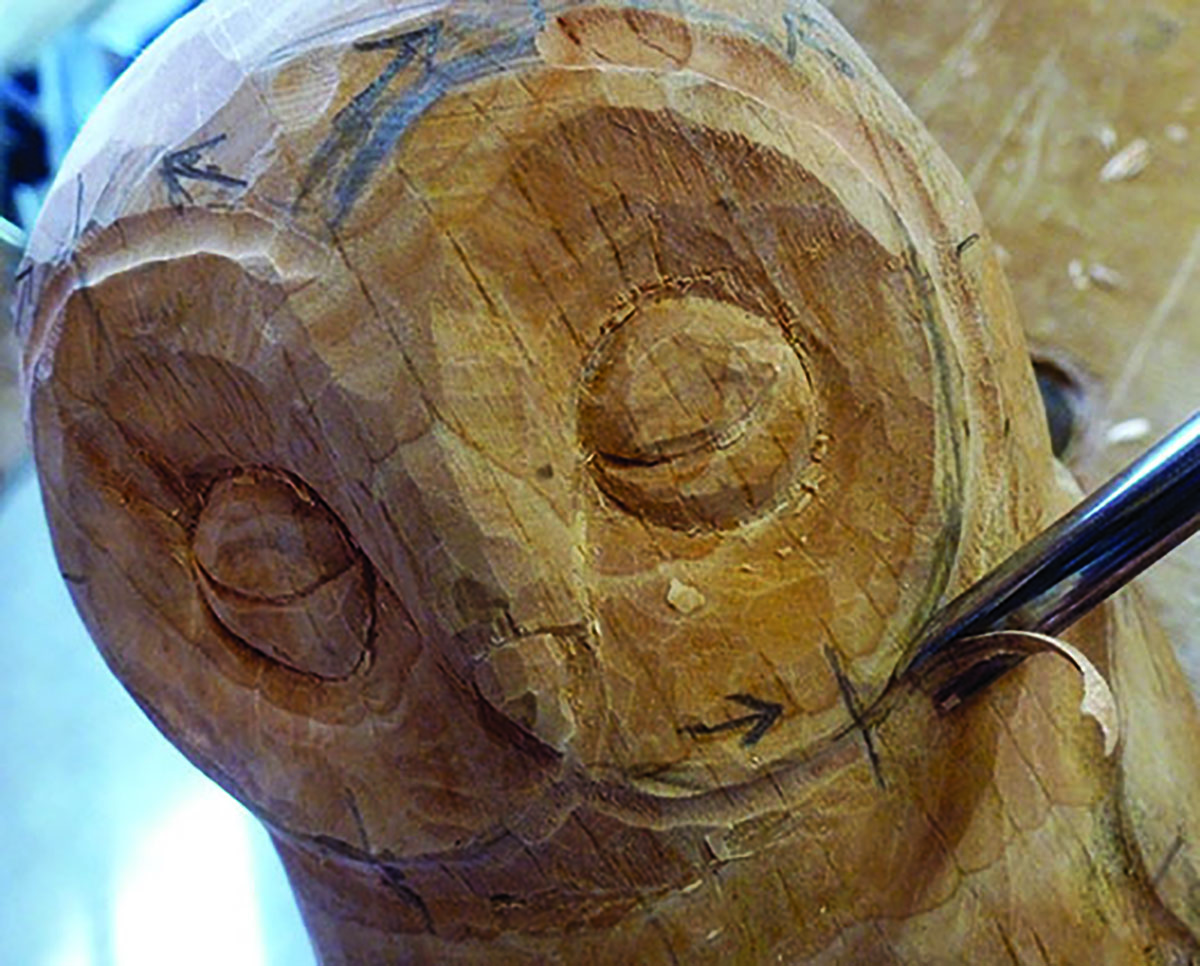 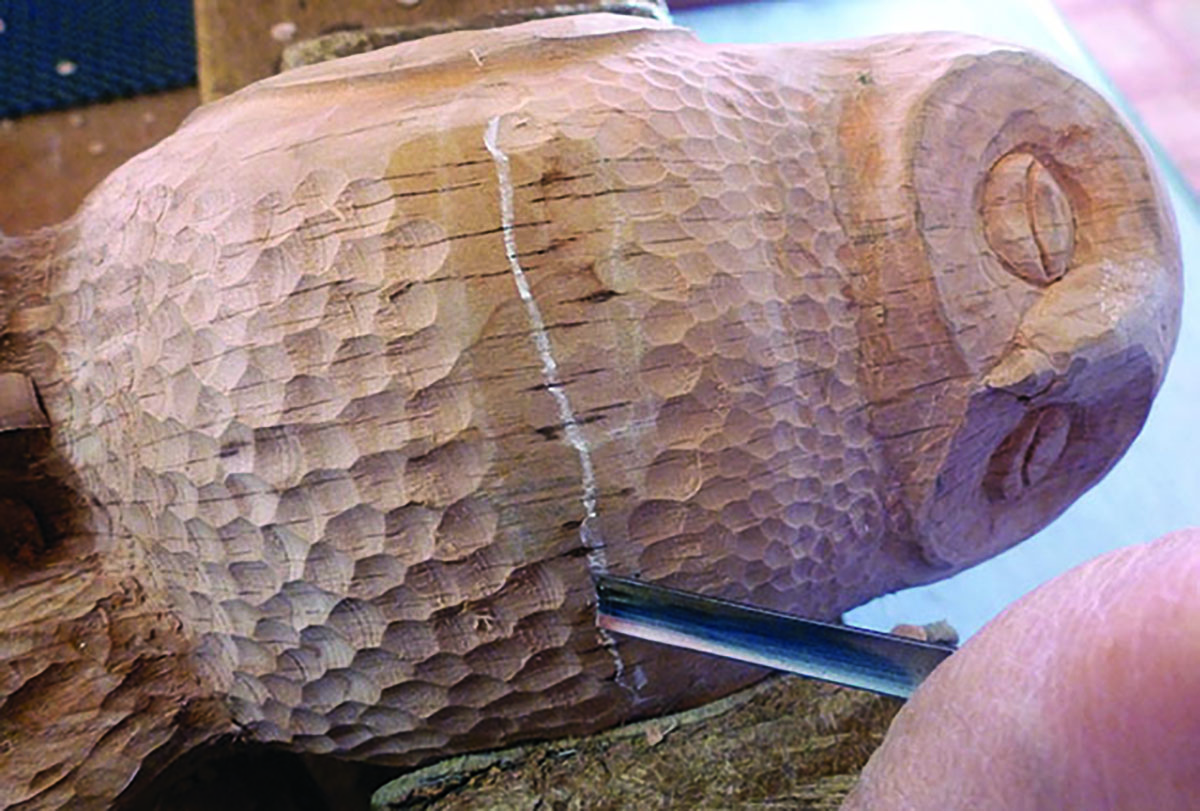 25: Starting beneath the beak, and cutting towards it, hold the No.9, 6mm gouge between your fingers and flick out short grooves across the breast, staggering each successive row until reaching the middle. Work up from the legs to meet up with the texturing at the middle of the breast 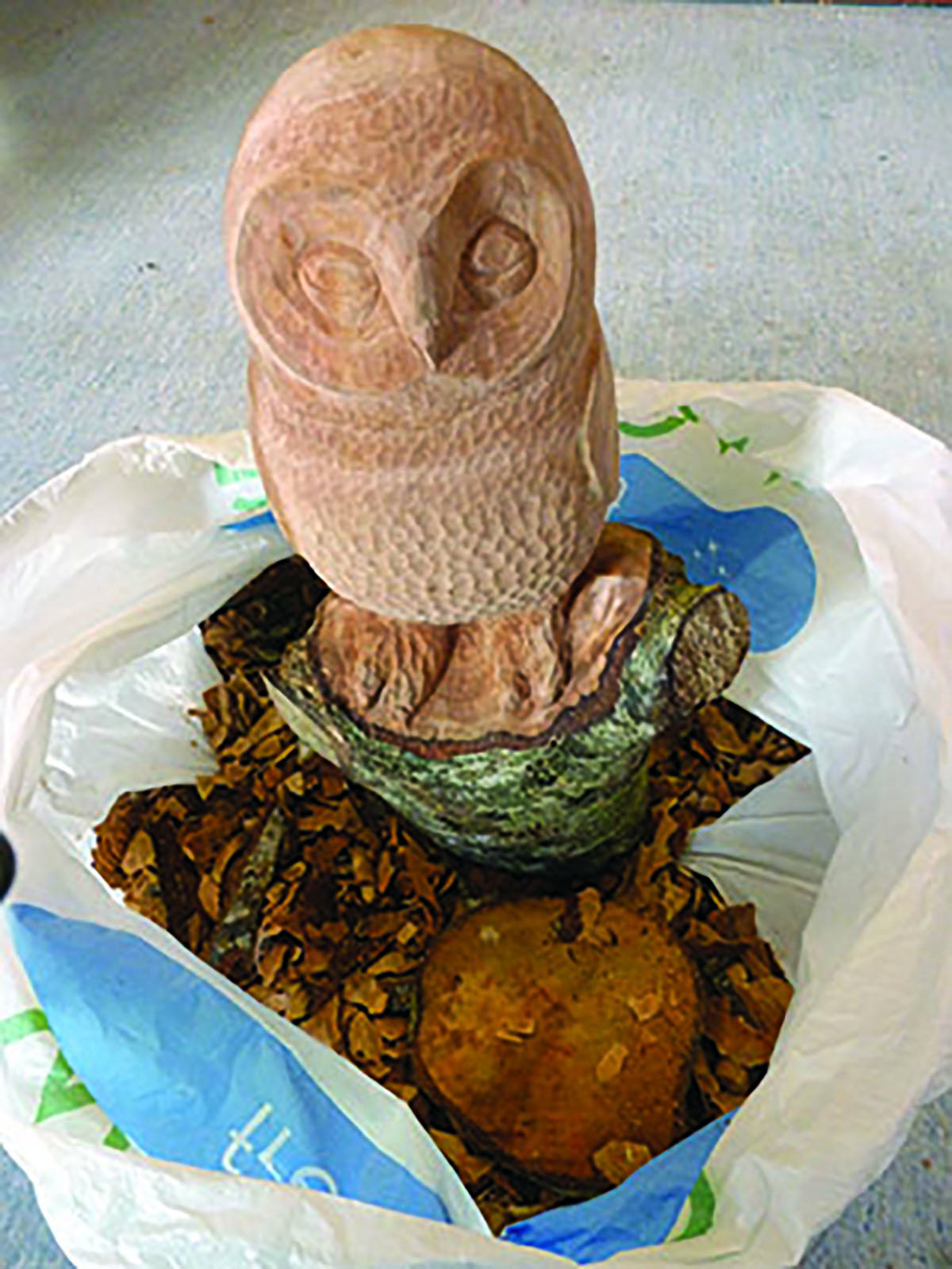 26: Cut all the meeting edges clean and remove the pencil lines with an eraser. Keep your owl within its chips with the bag open, allowing it to dry slowly. If you notice cracks appearing, sprinkle a few drops of water over the chips, but do not close the bag tightly or it may become mouldy. When its surface no longer feels damp apply a coat of wax polish and buff up with a lint-free duster