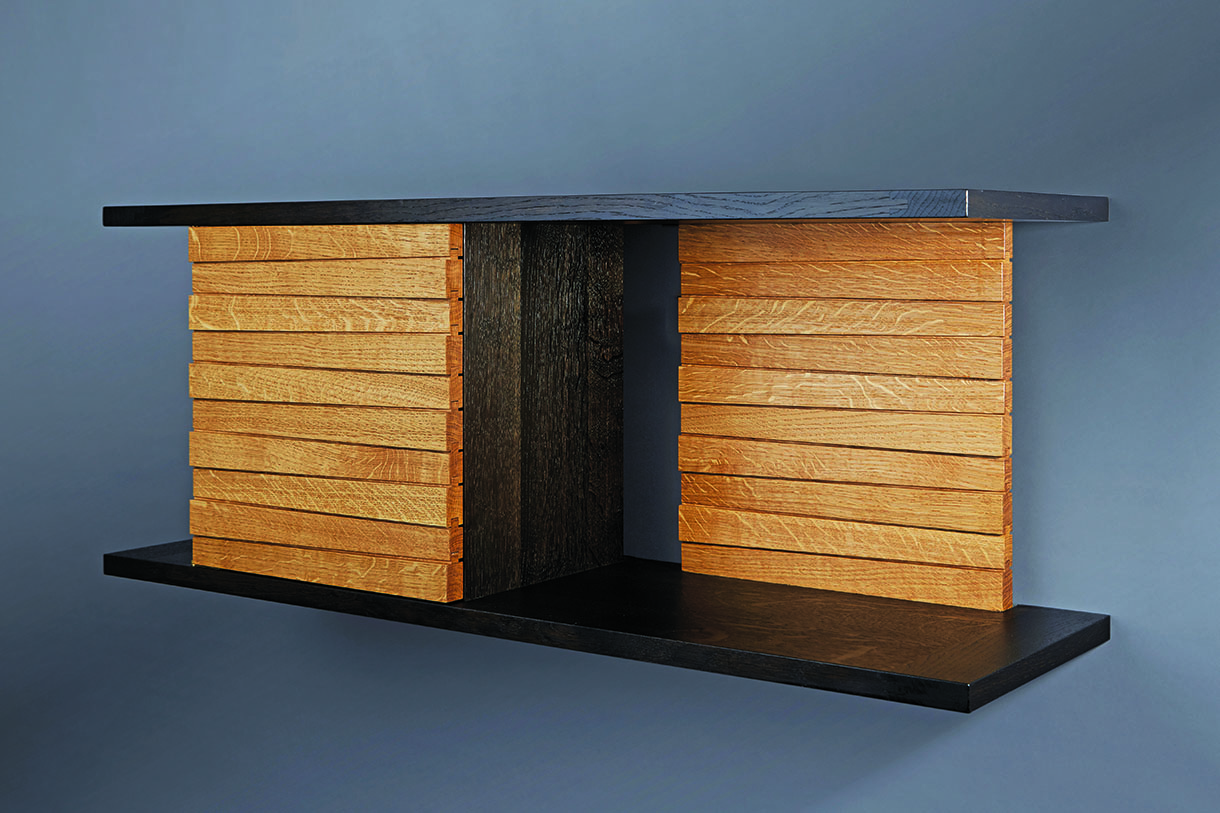 The facet cabinet came about as a speculative exhibition piece. I wanted to design a piece to highlight the warmth and strong grain of oak (Quercus robur). To this end I decided the piece should be starkly simple with strong linear elements, giving an almost architectural feel. But most of all I was certain that the piece should be made from solid wood. I don’t believe you can truly celebrate the grain of a wood when that grain only runs a fraction of a millimetre deep. Solid wood must be used sympathetically such that the grain of the wood, including its end grain, enhances the structure of the piece. In this case I wanted to dispense with the conventional framing elements in a frame and panel construction, and have the grain running in a single (horizontal) direction. Instead the door was stabilised by concealed batons running through the door. The constructional necessities of this method, such as the narrow staves and expansion gaps become the prominent features of the design. The staves were tapered and faceted to introduce interesting effects in light and shadow. The carcass, visible only as two horizontals when viewed in profile, was fumed and ebonised to emphasise the natural oak. As a final nod towards the versatility of solid wood the hand-dovetailed drawer runs on full extension wooden runners, purposefully left visible. 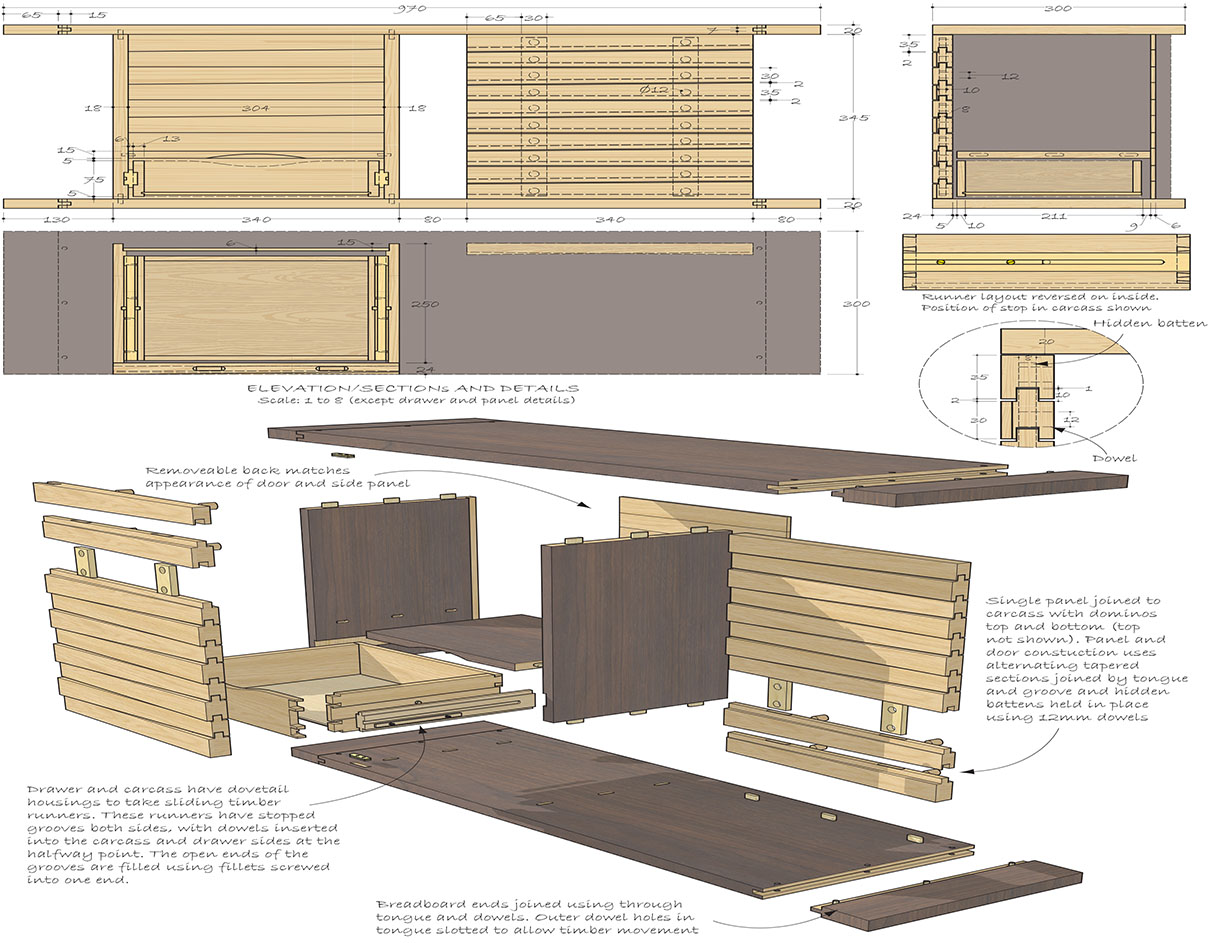 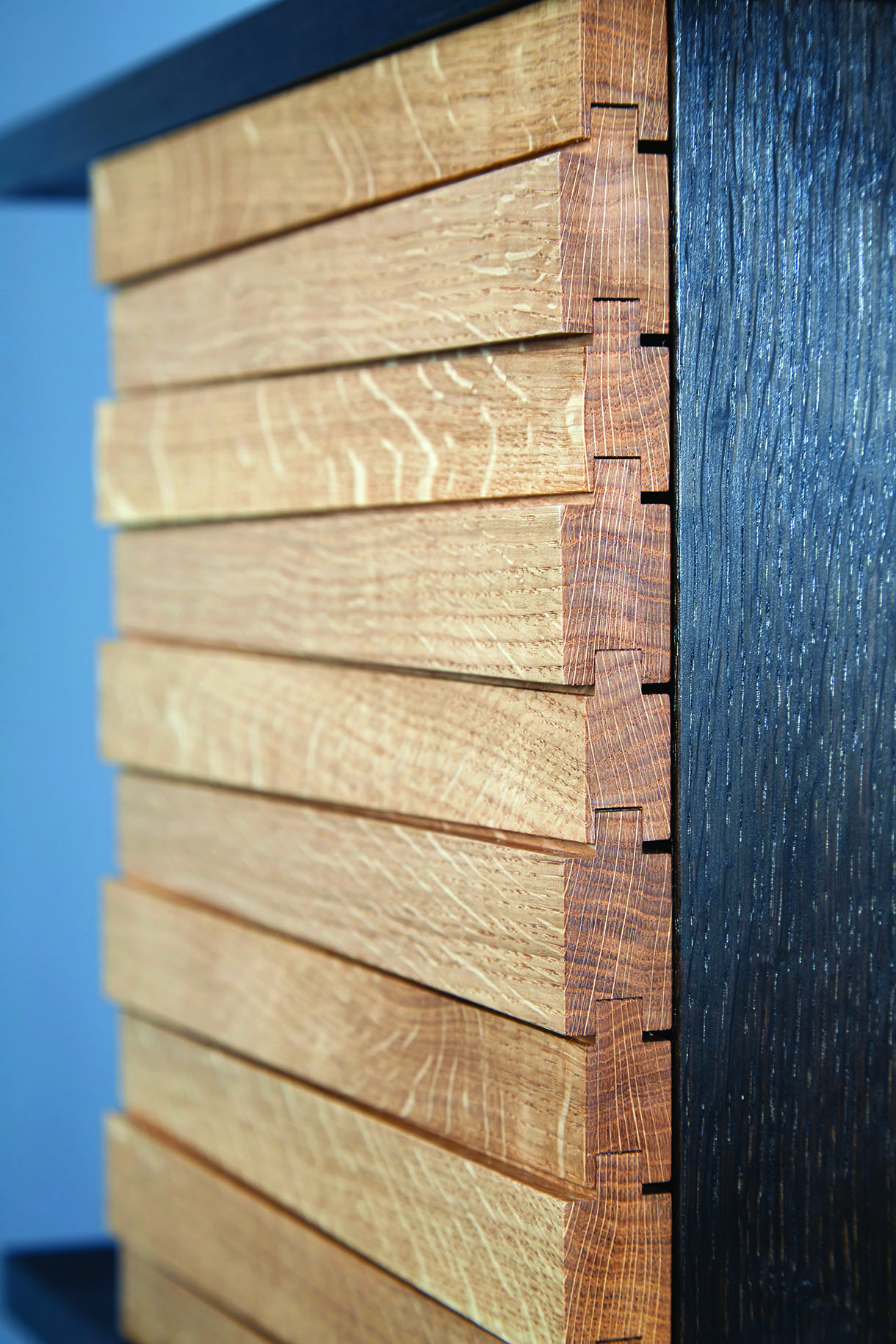 The door is made up of 10 individually tapered staves, which are threaded onto concealed batons 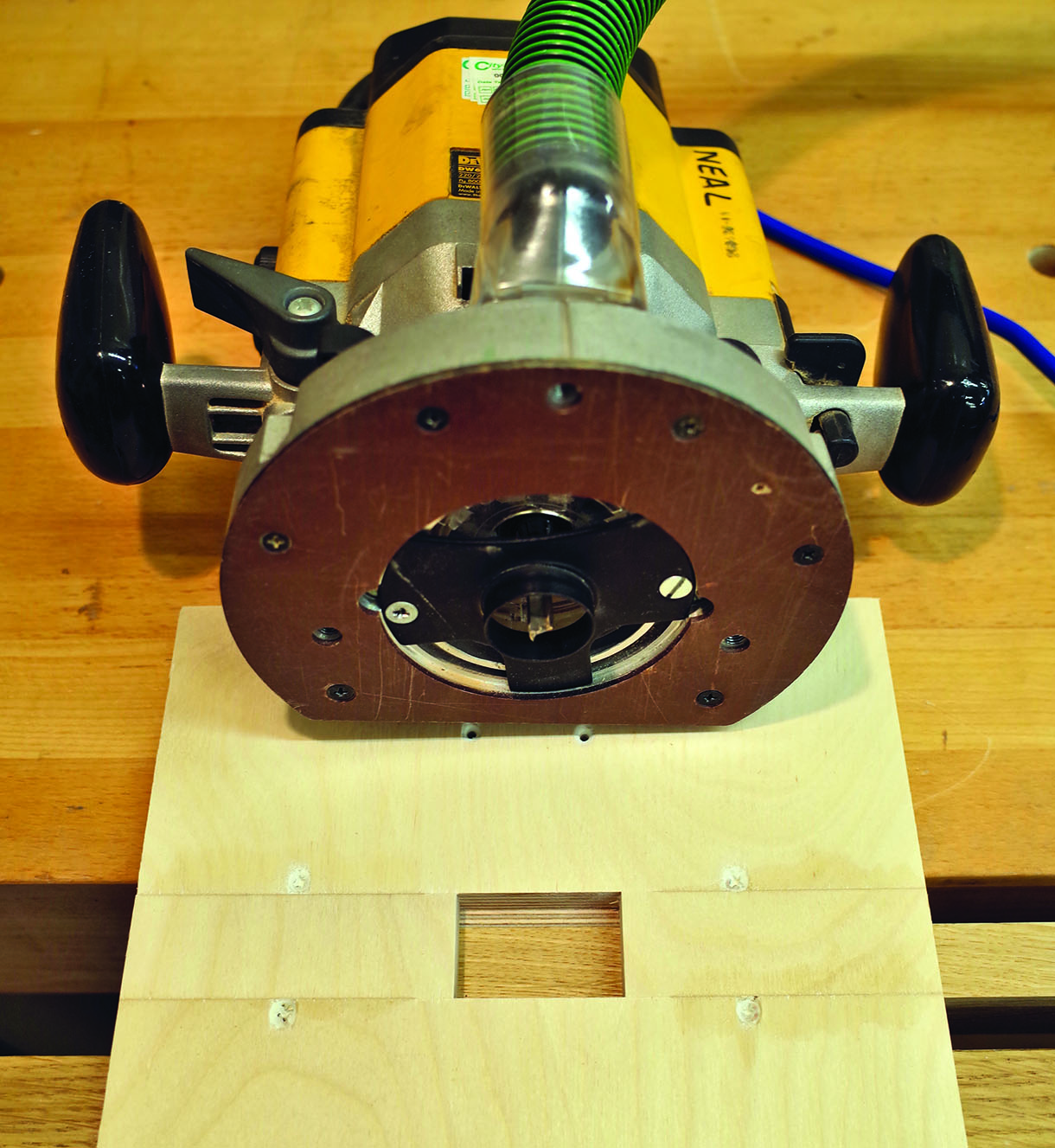 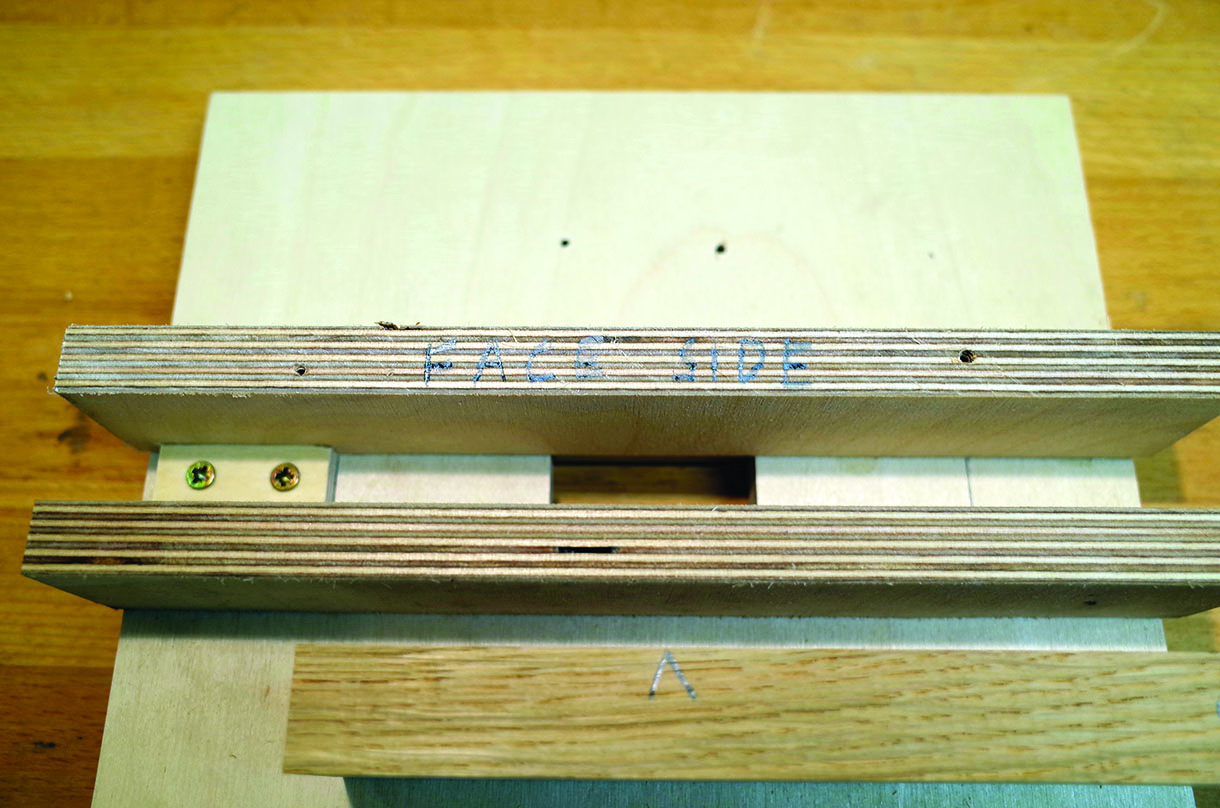 The stave is shaped in its width using a sled jig 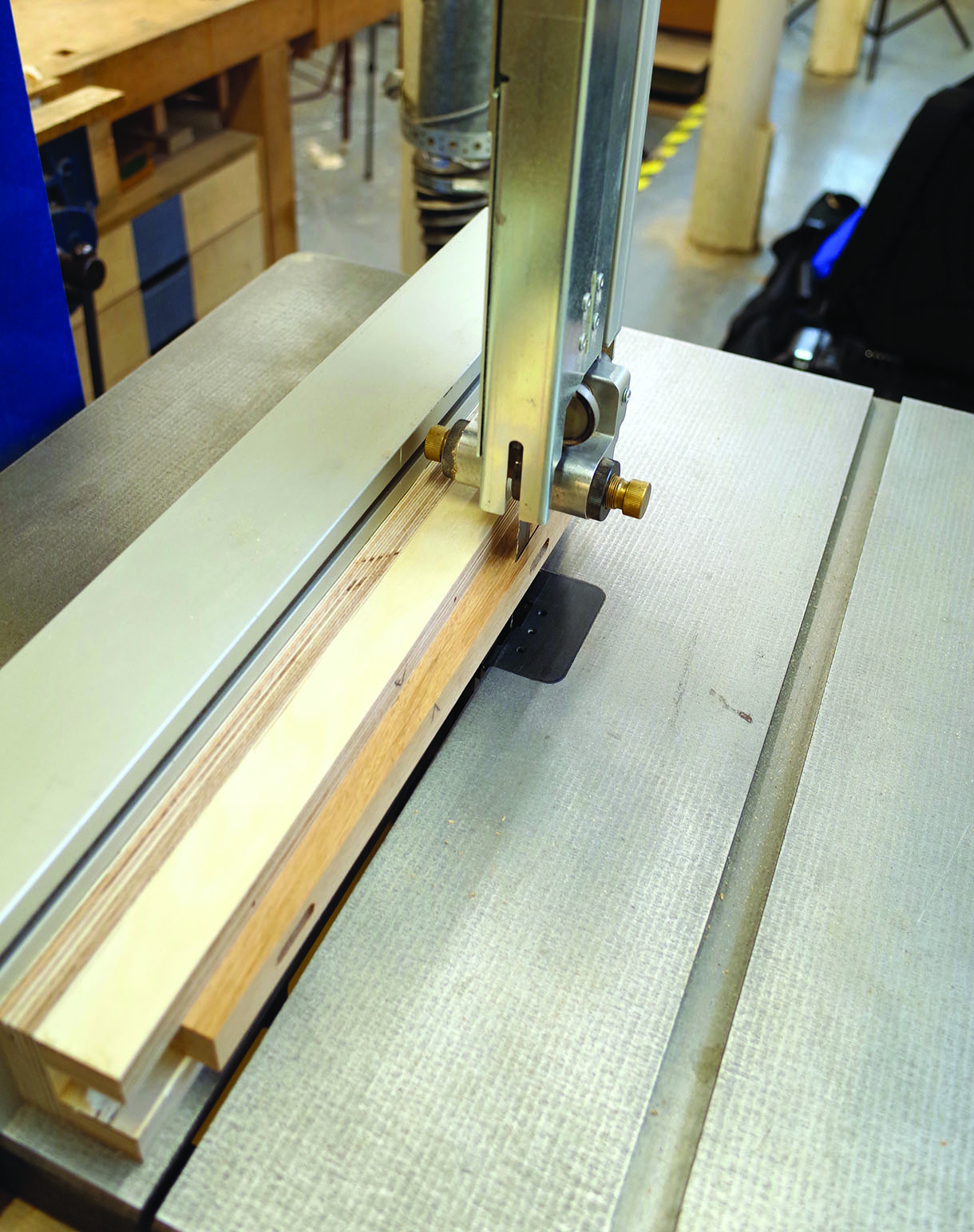 First the taper is roughly cut on the bandsaw 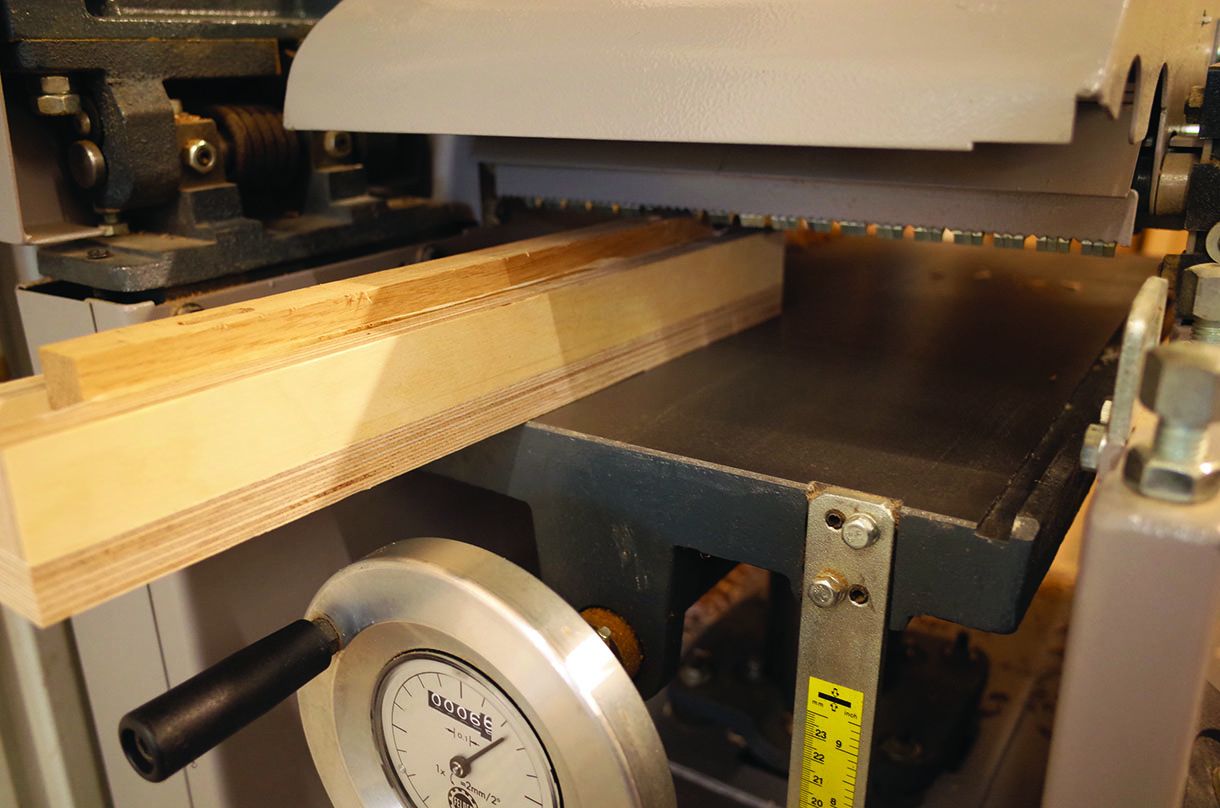 The rough cut is cleaned up using the thicknesser 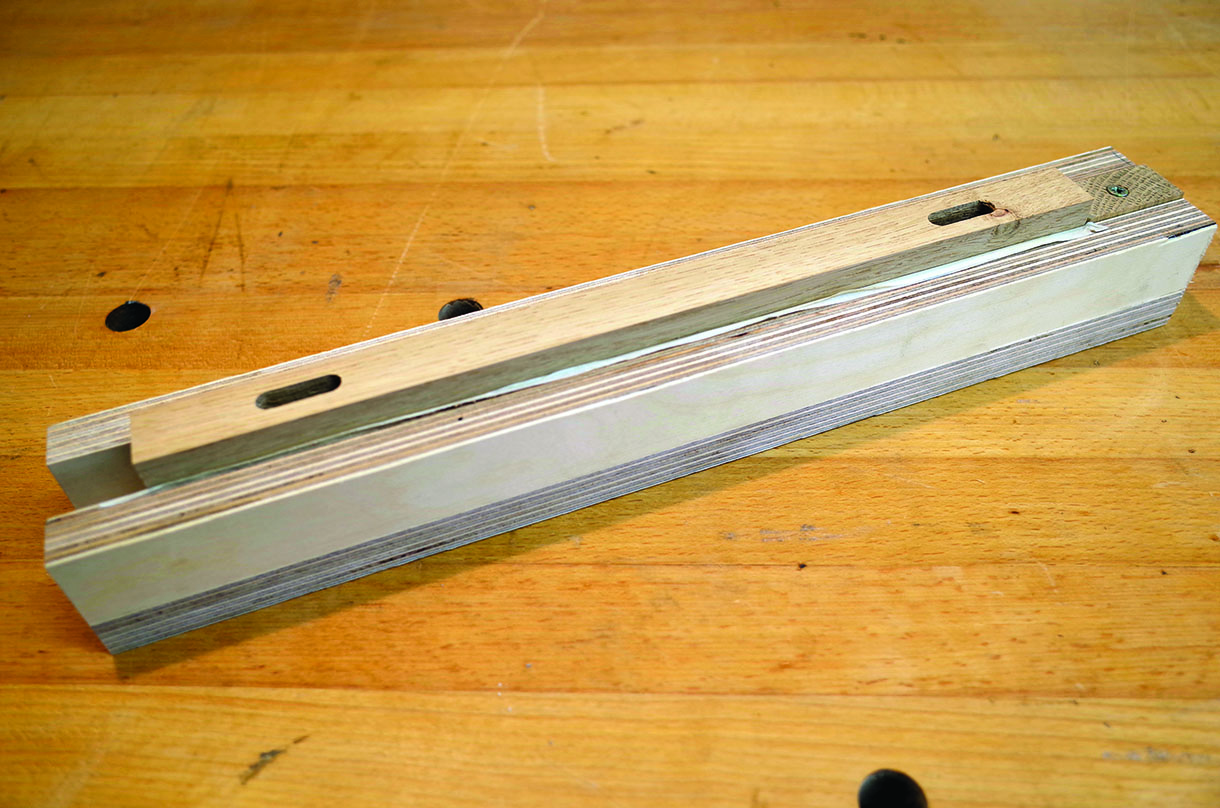 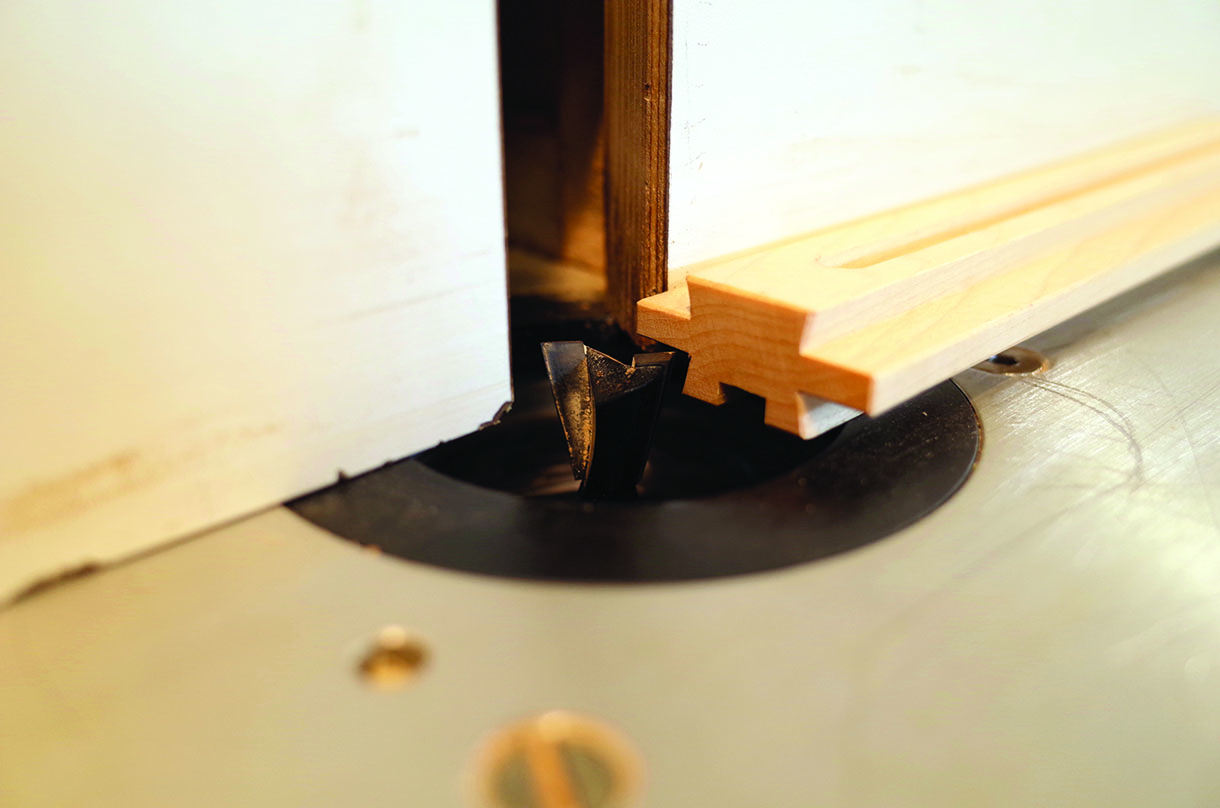 Cutting the tongues and grooves on the router table

… and the thickness profile

Door glue-up
Prior to assembly all the surfaces must be finished. The finished look of the door relies on sharp, crisp surfaces and edges, so if ever there is a time for heavy sanding, this is not it. All the faces are hand planed, I use a number 5 plane for the faces, a block plane for the edges and a low angle block plane for the end grain. The door can now be assembled. To ensure everything remains square and flat the door is assembled in a frame that is exactly square, which is in turn clamped to the bench (which is of course flat – right?). The staves are threaded onto the batons without glue and the whole assembly is placed in the frame. Packing pieces ensure that the expansion gaps between the staves are even. With everything in place the door is clamped along the length of the batons. The door is held together by dowels that pin each stave to the batons. These dowel holes are routed in the back of the door while it is in the frame. To do this the door assembly is flipped in the frame and the dowel holes routed using a template and a router fitted with a guide bushing. The dowels can now be glued with the door assembly still in the clamps without any rush or stress about the glue going off. Cleaning up the doors is similarly easy, the dowels and any excess glue is flushed off with a plane. The finished doors can then be fitted for height with a few strokes of the plane and hinged using Brusso pivot hinges. The finished door can’t really be fitted to an opening in the conventional manner, as planing the sides of the door is liable to lead to breakout across the back edges of each stave. Therefore extreme care is needed to make both the door and the carcass perfectly square. 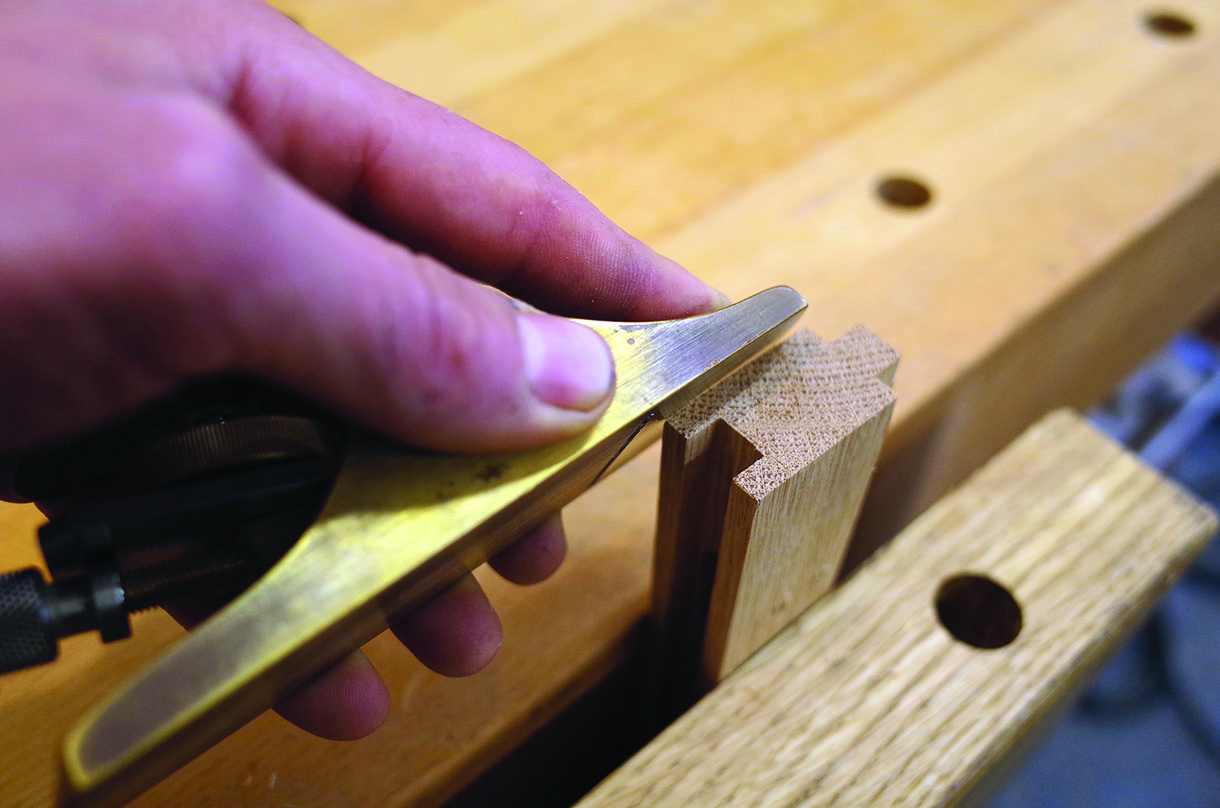 Prior to glue-up the stave ends are finished 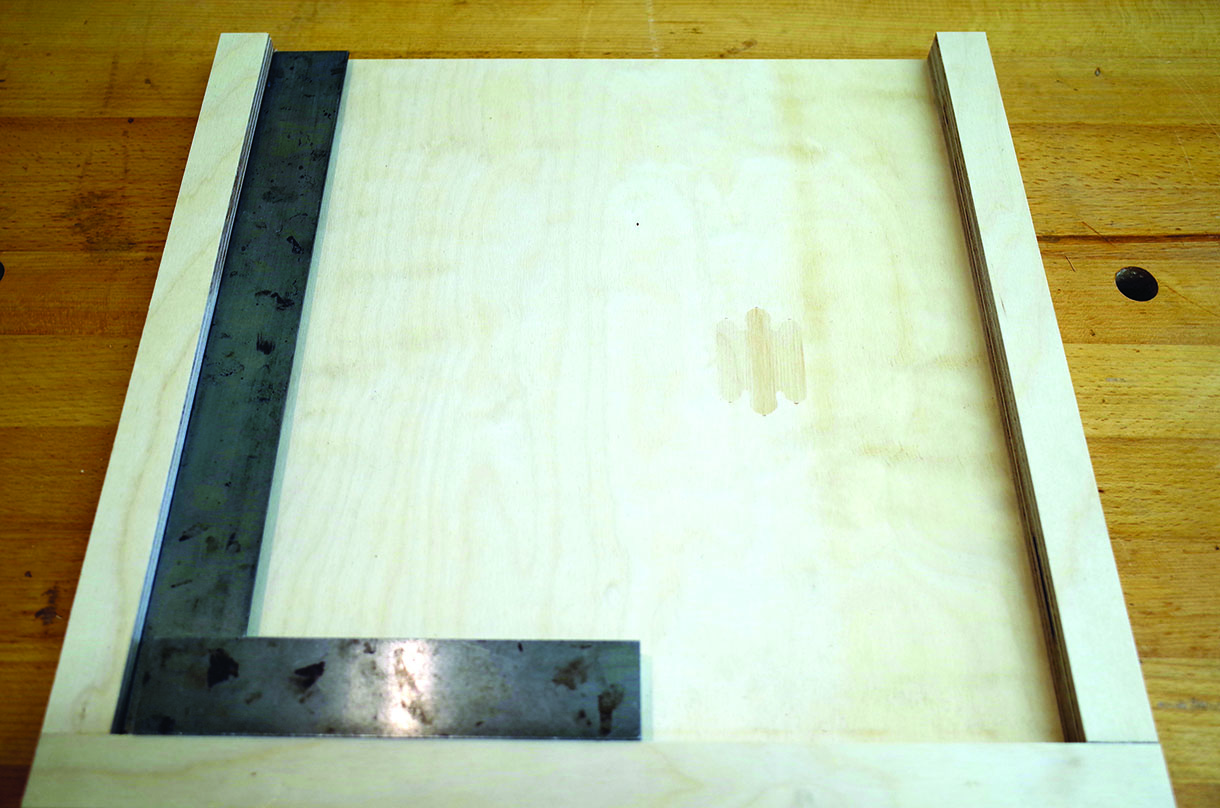 The door is glued up in a frame made exactly square 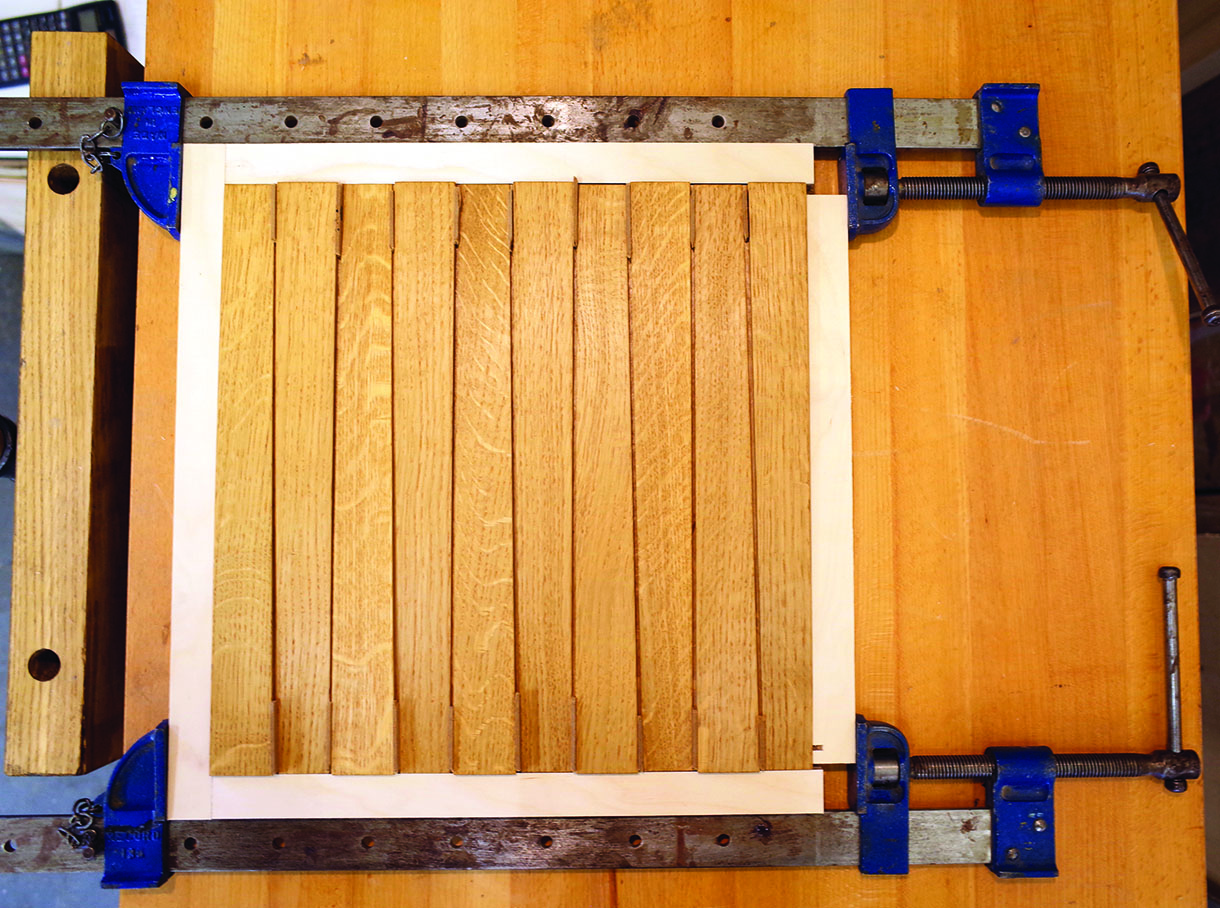 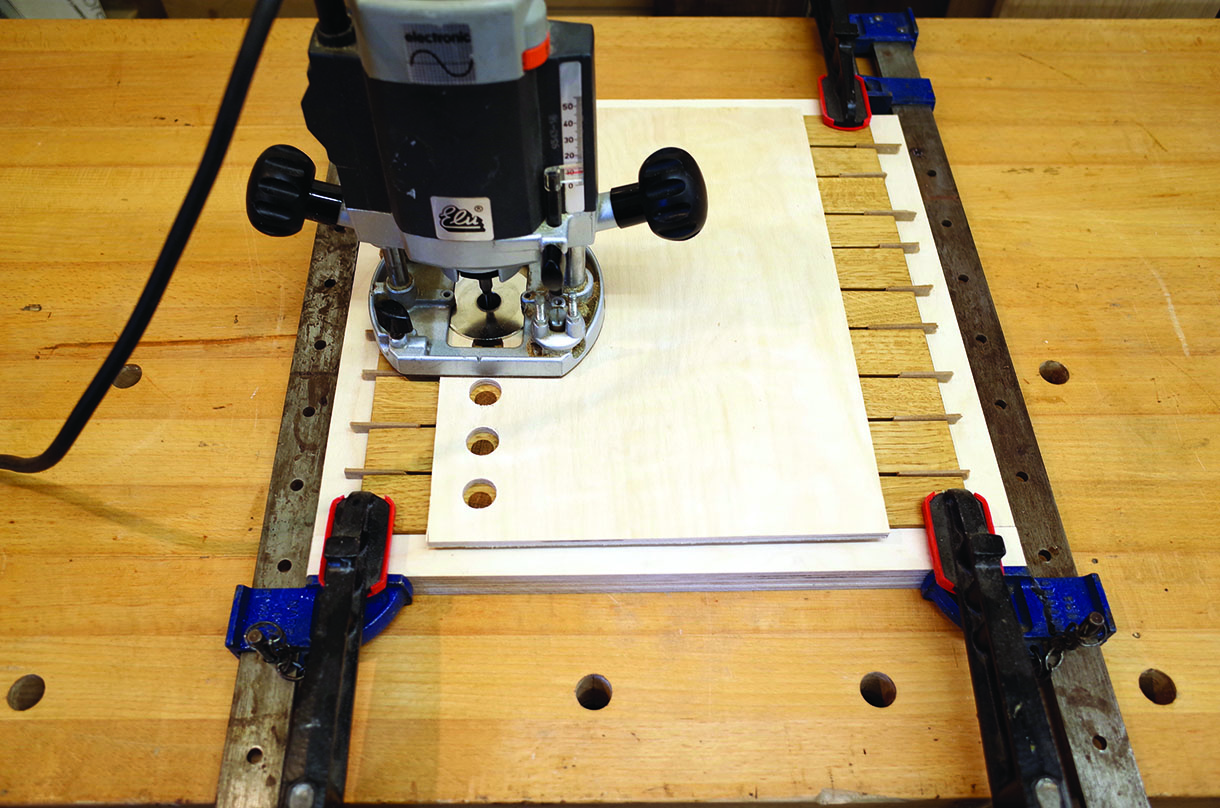 Dowel holes are routed in the back of the door. The door is clamped to the bench to ensure flatness

Full extension wooden drawer runners
While the practicality of metal full extension runners is undeniable, I have never really felt them suitable for fine furniture. On this piece I decided to head into proper wood engineering and make a set out of wood. The runners run in two dovetail housings, one in the drawer side, one in the carcass. Stops running in grooves prevent the runner extending more than halfway out of each housing, i.e. when the drawer is fully open. The dovetail housings in the carcass are routed before the carcass is glued up. The drawer front is fitted tightly to the opening, but with a packing piece on each side to allow for the runner. The drawer is then made traditionally with through dovetails and a cedar (Cedrus spp.) base, although the sides are thicker to accept the runner housing. The dovetail layout is altered such that the runner housing is contained within the central tail at the front and rear. The assembled drawer is then planed down to a slightly looser fit in the packed opening. The dovetail housing is then carefully routed into the sides of the assembled drawer, a harrowing experience! Great care should be taken to ensure these housings are identical to the carcass housing, ideally by using the same height setting on the router table. The drawer runners were made from well-seasoned maple, again plenty of spares were machined up and the straightest chosen.
I found fitting the runners to be not at all easy. While it is pretty straightforward to get a single side running freely, to get both sides running together is altogether harder. What follows is the best method I could come up with, but is still reliant on a fair amount of trial and error. The thickness of the runner is the crucial measurement that determines the fit, this was carefully measured as twice the housing depth, plus the thickness of the packing piece used in the drawer fitting above.
The dovetailed shoulders are then cut on the router table using the same cutter height as for the housings, and adjusting the fence so that each runner runs freely in its housing. Provided everything has gone right, the flange between the two sliding dovetails should now be precisely the width of the packing piece used in the original drawer fitting. This should lead to a perfectly fitting drawer, just as it did in the drawer fitting above. If the drawer does bind there really is no way to adjust this other than starting again with a slightly thinner set of runners, hence the spares! Stops are necessary to stop the runner falling out of the housings. Dowel stops are placed halfway along both the drawer and carcass housings. These dowel stops run in stopped grooves in both sides of the runner. The groove is routed with one end open, which is subsequently stopped by placing a fillet in the groove. The photos shown illustrate how the stopped end of the groove limits how far the drawer can extend, and how the fillet stops the drawer being pushed into the carcass. There is an analogous arrangement on the carcass side. The drawer is installed by screwing in the fillets in situ, so ensure the screws are accessible with the drawer installed. Finally, remember that the drawer is installed from the back, so make sure any back panel is removable! In this case I chose a back panel that mirrored the design of the door, in solid wood of course. 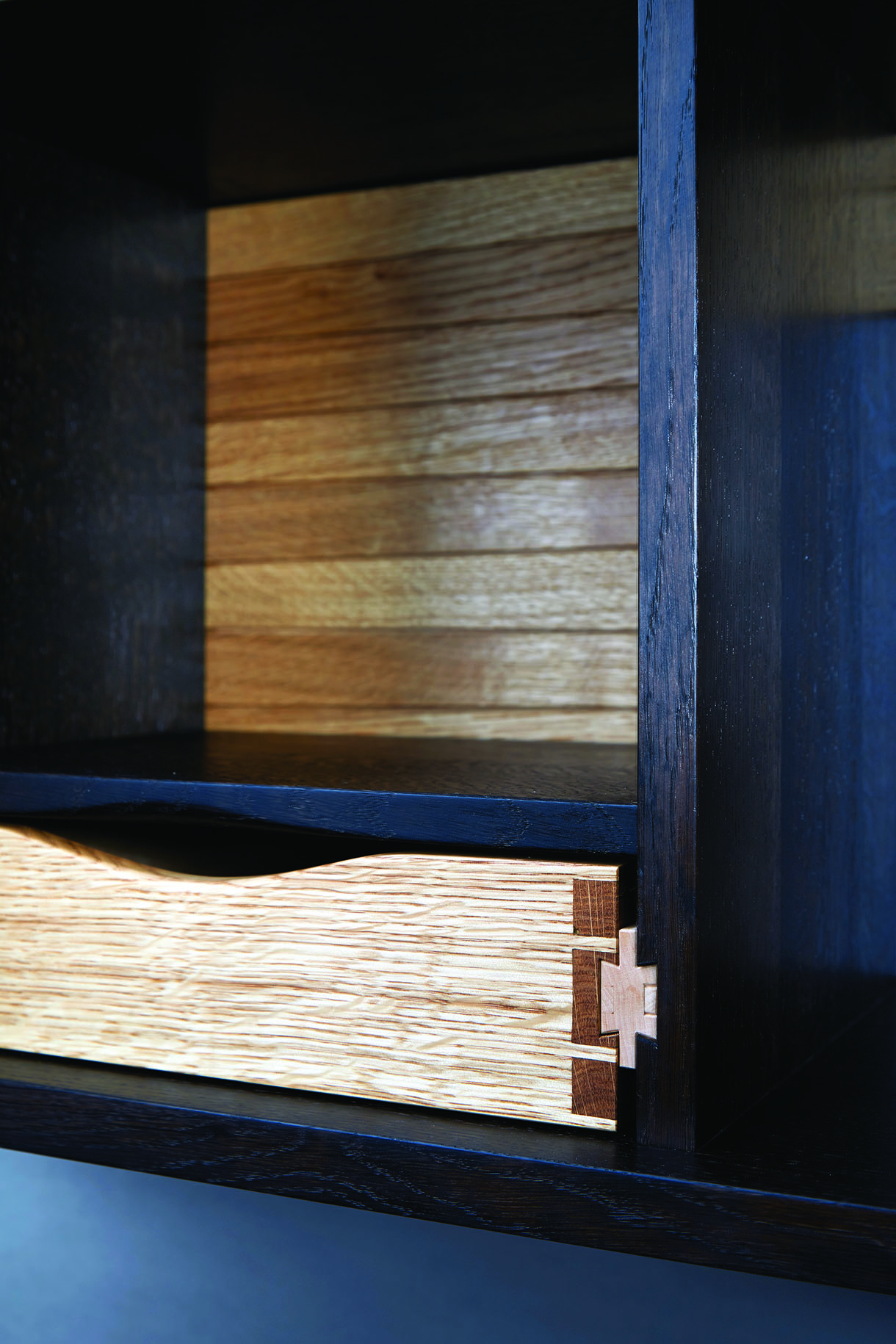 Dovetail layout to accommodate runner housing in drawer side 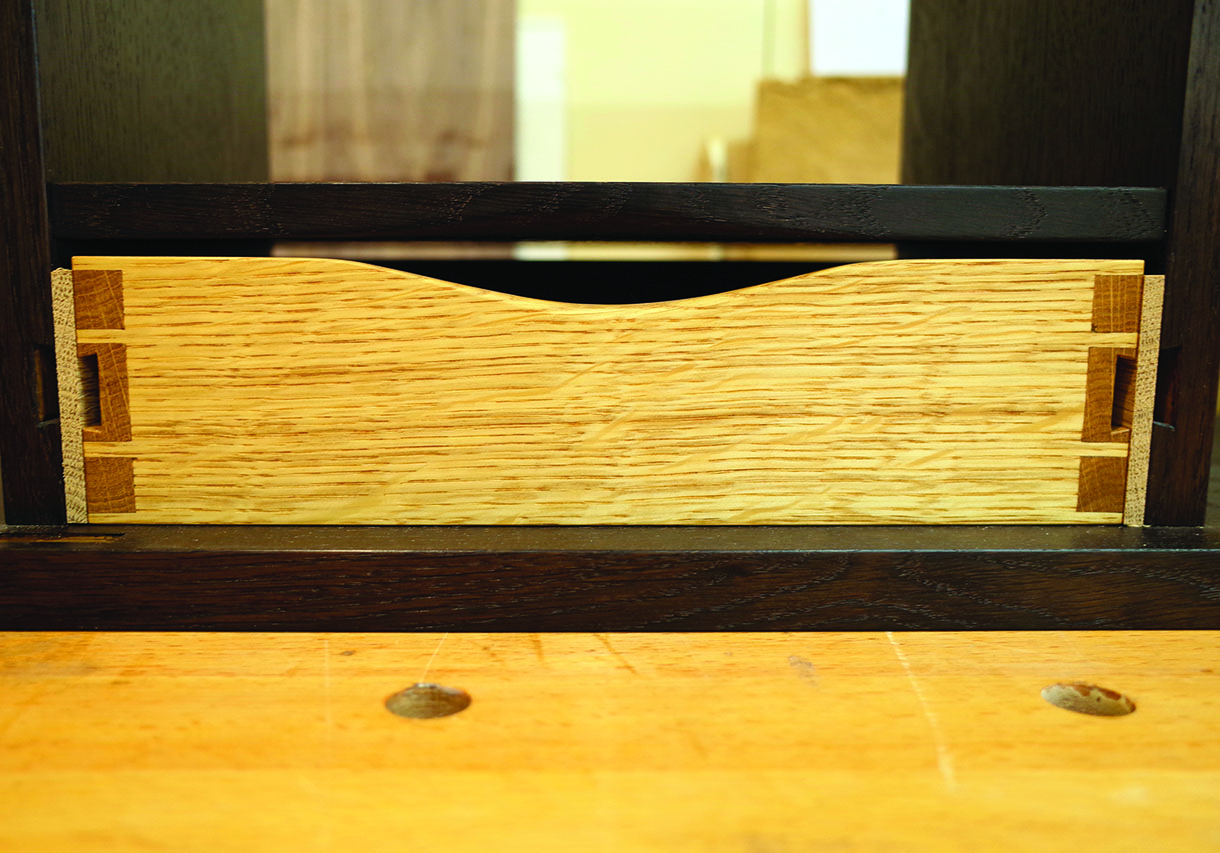 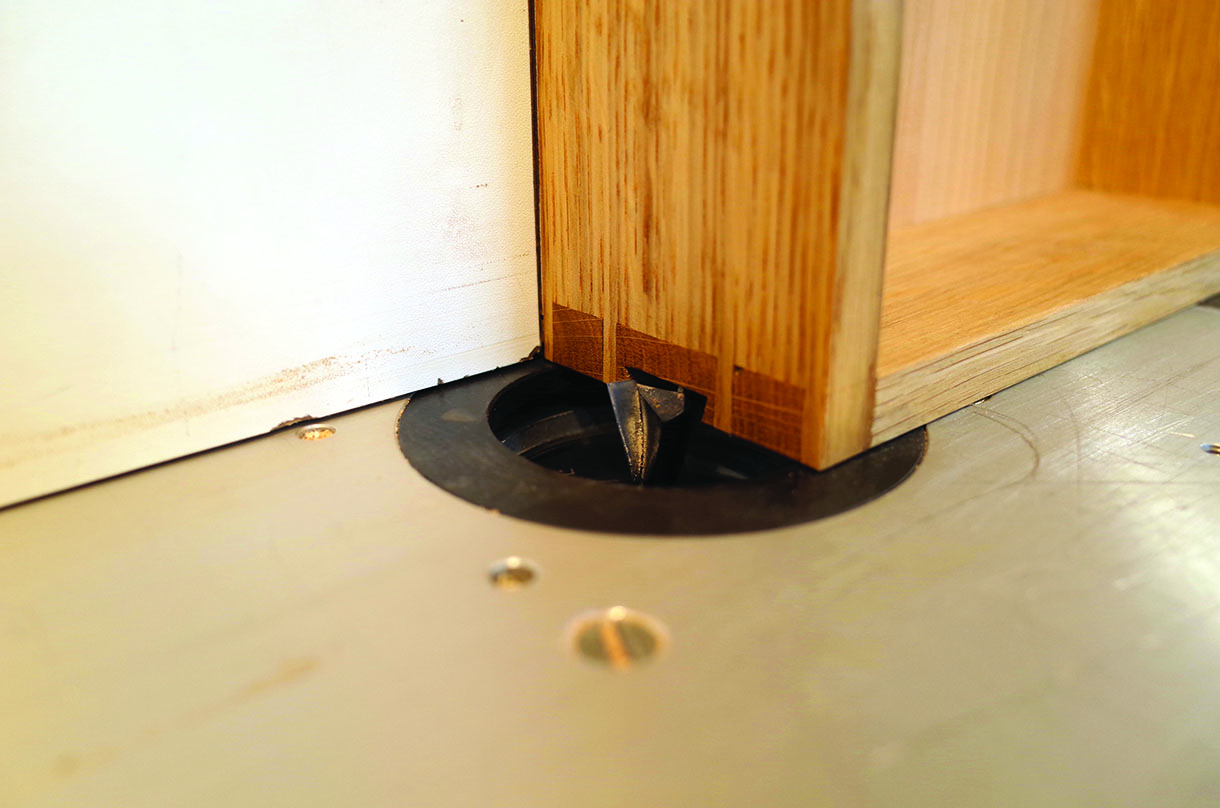 The housing is routed into the drawer side

Routing the dovetail shoulders on the runners 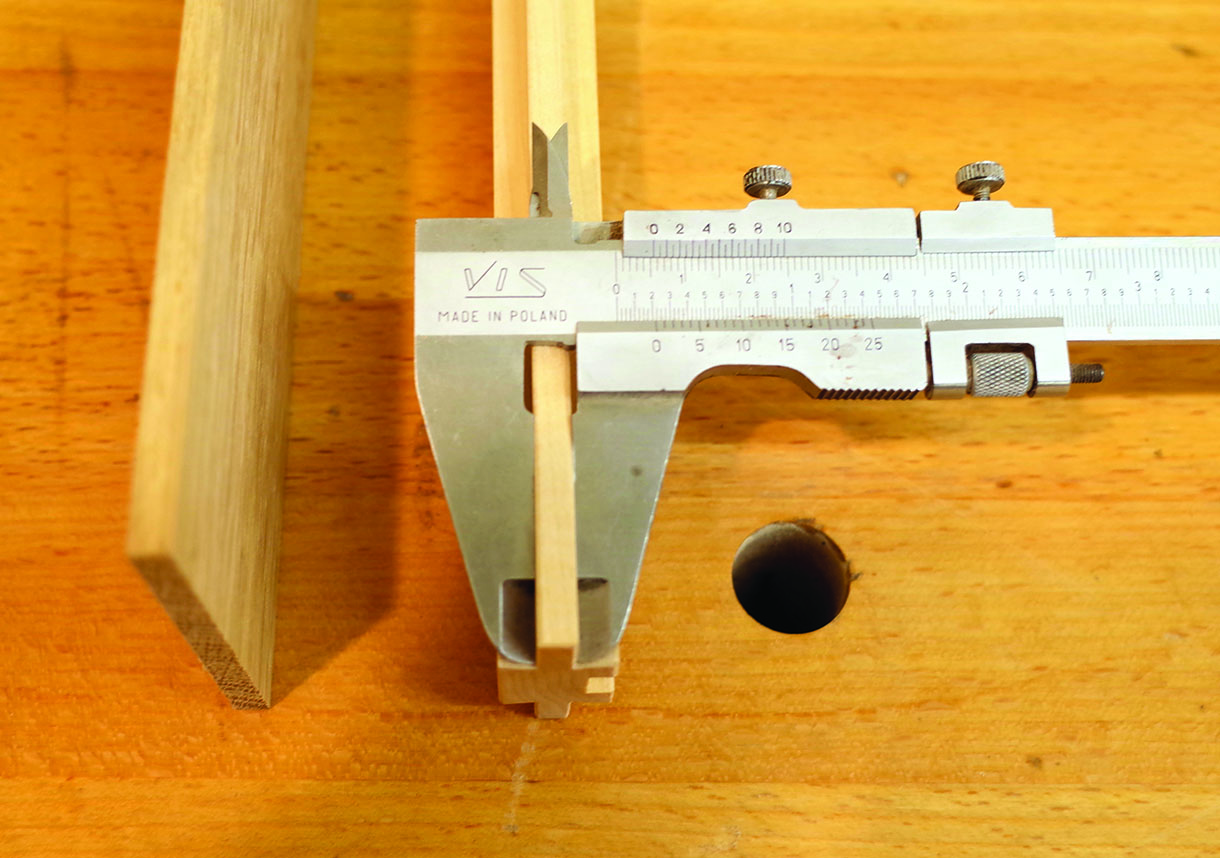 The spacer and the flange should be exactly the same width 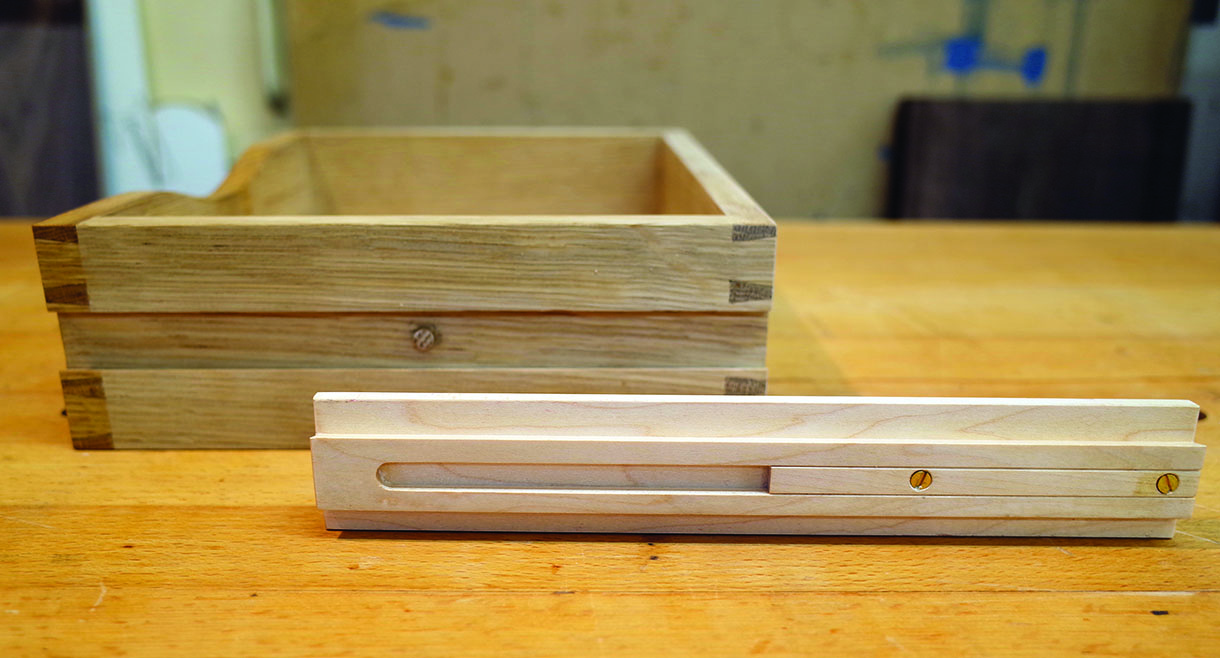 The stops prevent the drawer overextending … 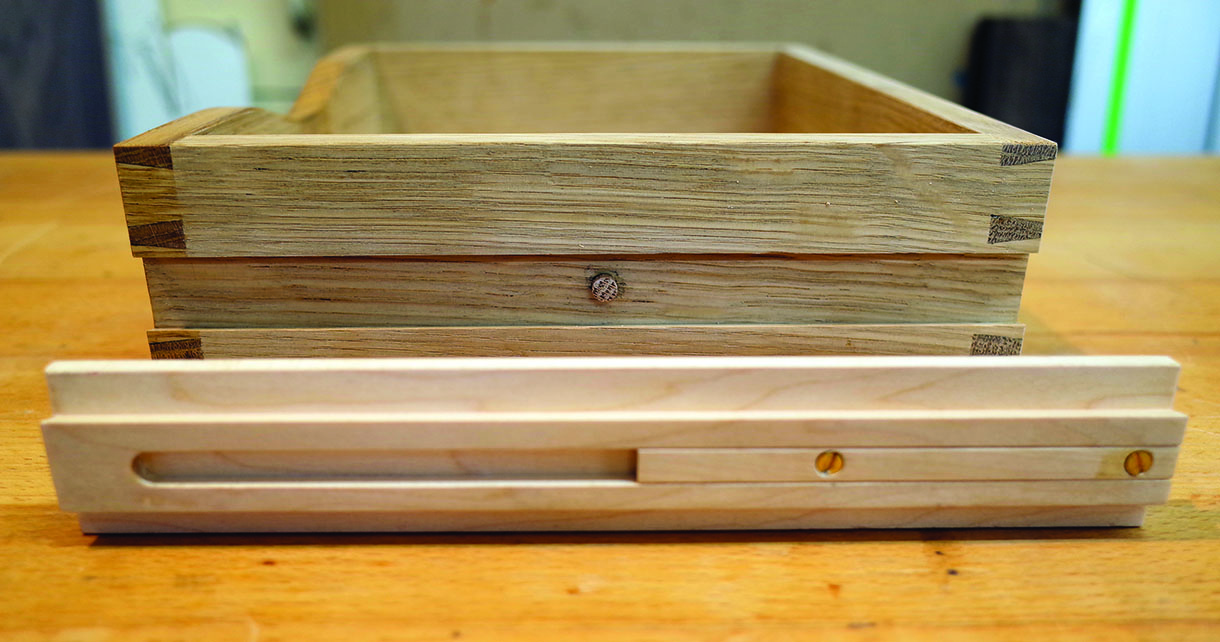 … and disappearing into the carcass 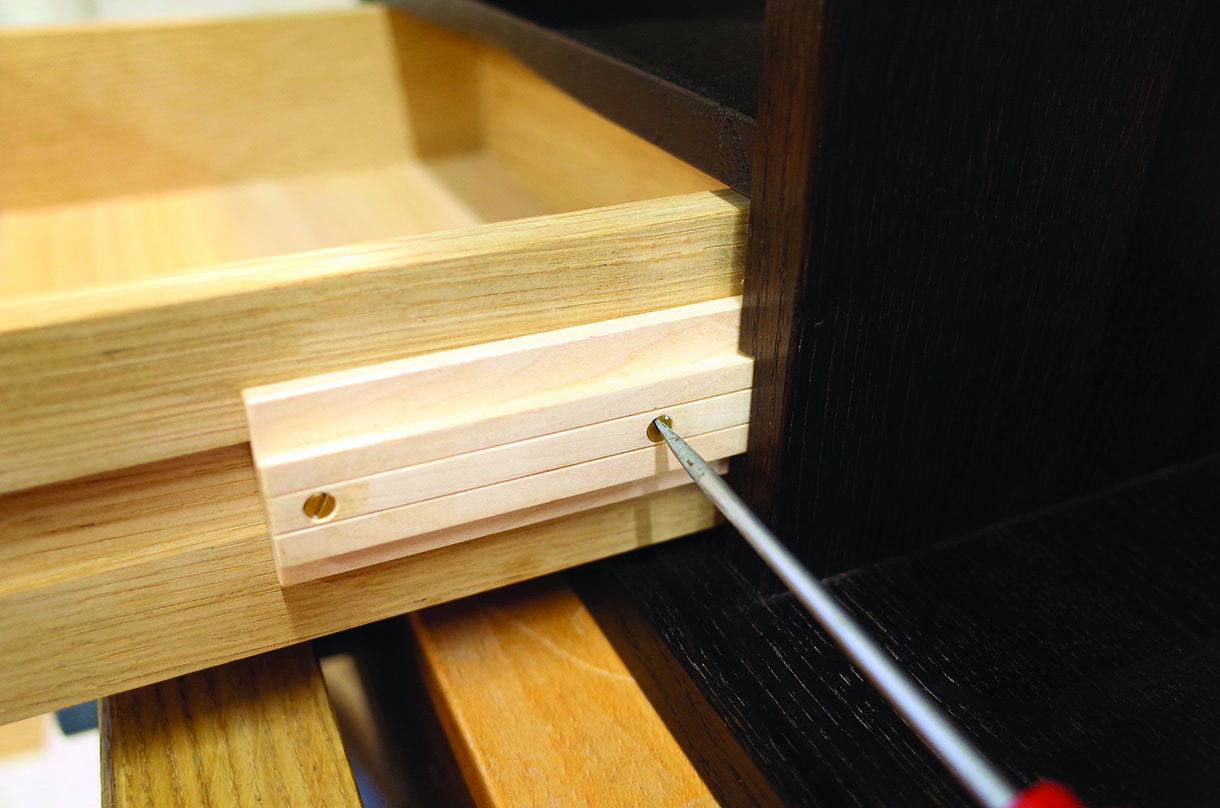 The drawer is installed by screwing in the fillets

Conclusion
I really enjoyed the challenges this piece brought and hopefully I have explained my motivation for exploring the slightly unusual construction methods. I hope I have also hinted at some further ways in which these methods can be exploited. Neither of the methods I have described are particularly advanced in any single stage and with sufficient forethought, methodical working and a constant eye on accuracy you should be able to achieve similar results.

Beyond the frame and panel
Frame and panel construction, whereby a floating solid panel is constrained by a frame, is the traditional method of stabilising panels of solid wood.
The purpose of the frame is two-fold; it allows the panel to expand and contract while maintaining the outer dimension (i.e. preventing a door from binding in its opening), and it prevents the panel from warping. In the pursuit of a more contemporary look, manmade boards are often used to remove the unwanted movement of solid wood. Alternatively, the movement of solid wood can be embraced; with imagination and a bit of thought, stability can be brought to solid wood in myriad ways beyond the frame and panel. Furthermore, the constructional necessities of these designs can be emphasised as a hallmark of contemporary craftsmanship, for example as visible dovetail batons.
This approach is not new and was exemplified by Franz Karg, a German woodworker active in in the 1970s and 80s. As my work continues I am learning to appreciate the beauty of solid wood and how this can be enhanced by complementary design. As you can see in the photos here, wide staves enhance a beautiful single board of ash (Fraxinus excelsior), whereas narrow staves showcase the exceptionally tight grain of larch (Larix decidua) grown at alpine altitudes, set against ebonised oak (Quercus robur). 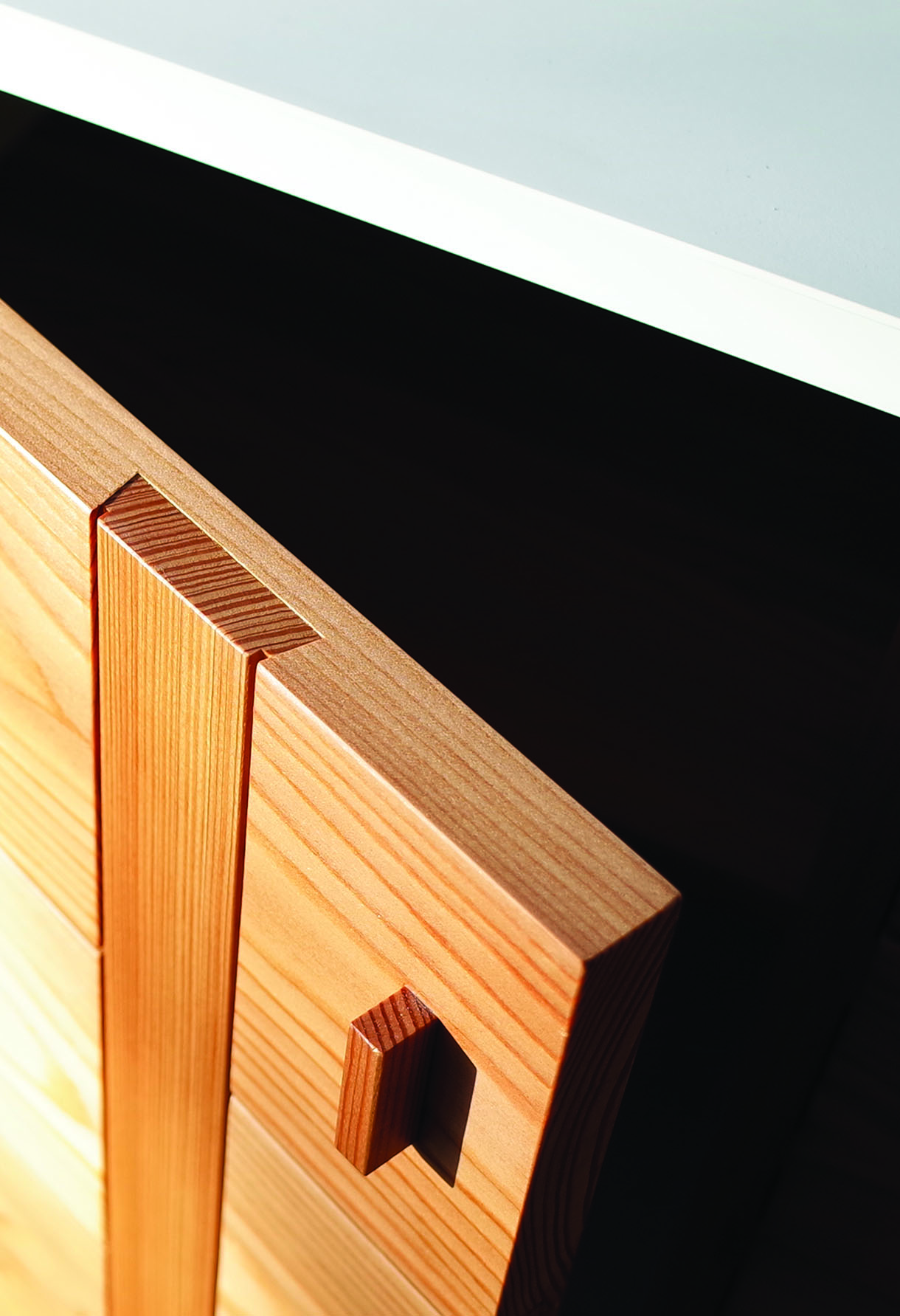 Detail of visible dovetailed baton in larch and Formica cabinet 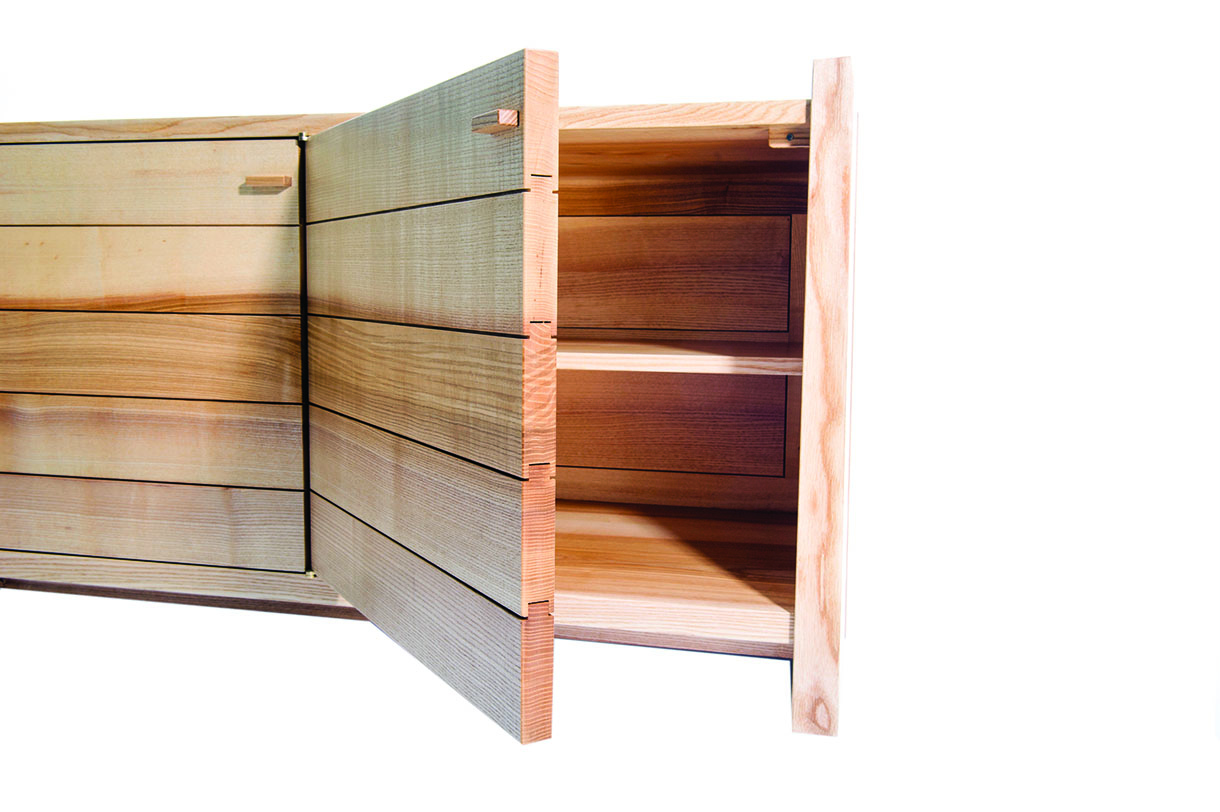 Doors constructed from a single board of native ash 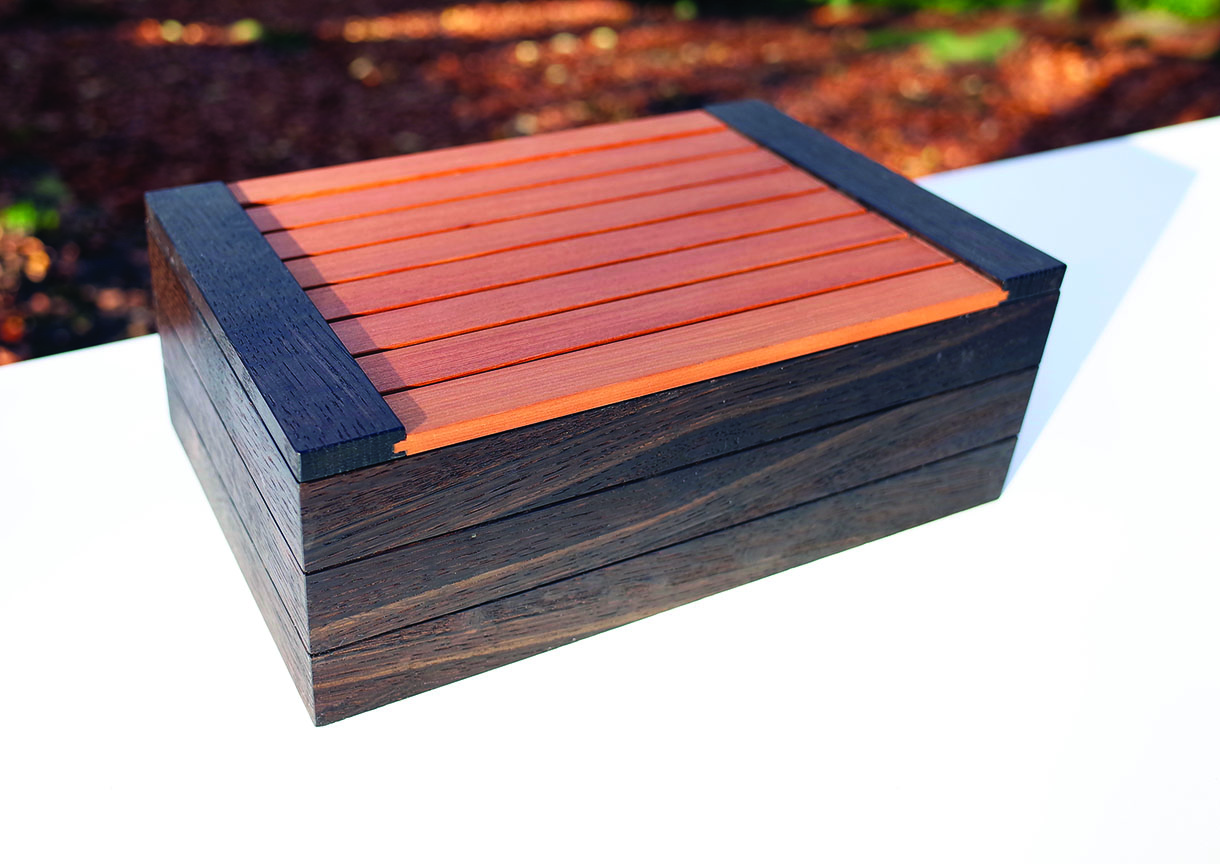 Jewellery box made from reclaimed Swiss larch and ebonised oak