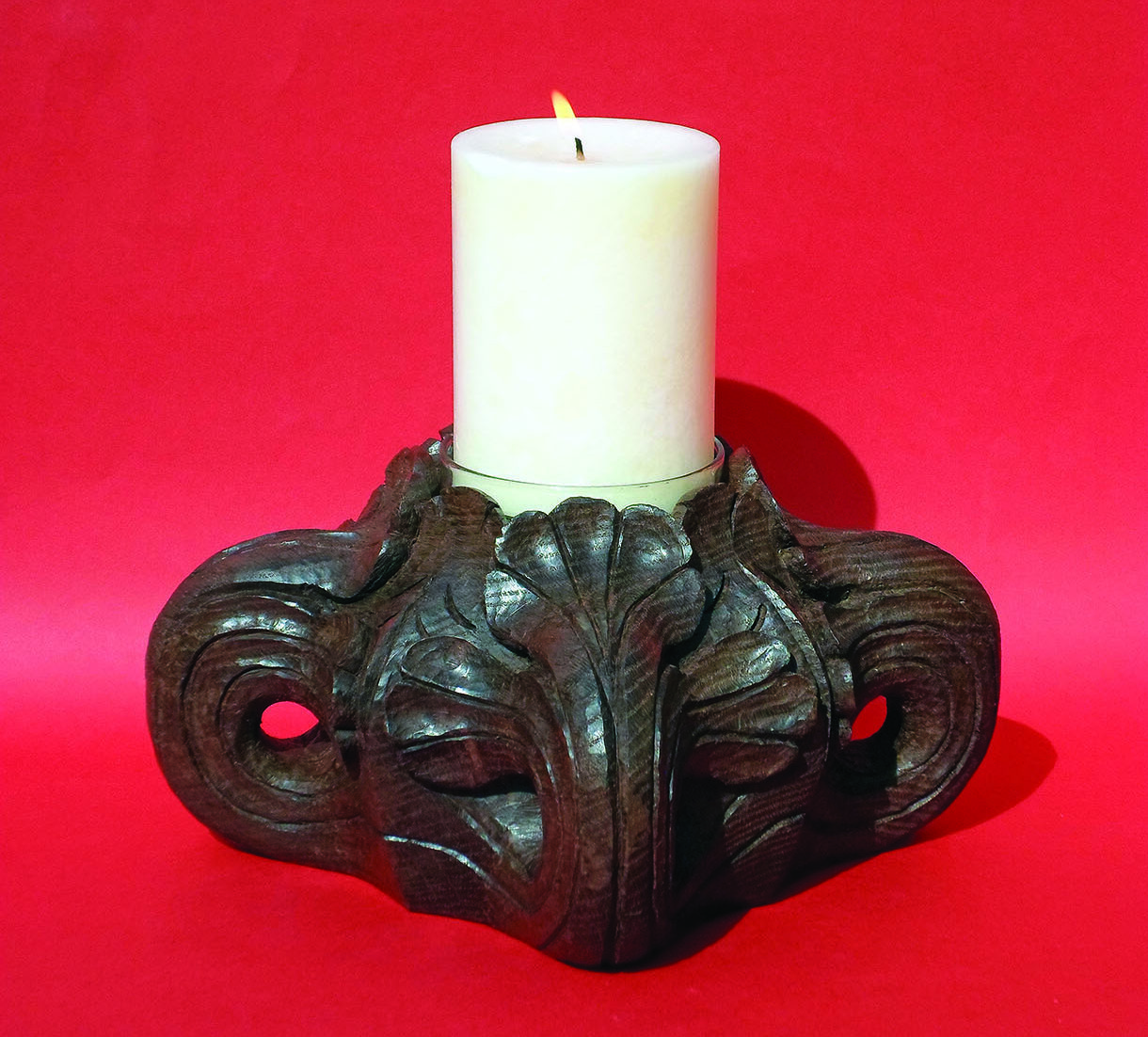 Much as I like making thin and delicate carvings in limewood (Tilia vulgaris), it makes a refreshing change occasionally to carve a block of solid oak (Quercus robur) into something heavy, dark and Gothic. As most Gothic carving was done for churches and cathedrals we usually need to adapt the style for domestic use, so I have created this candle stand inspired by the roof bosses found at the junctions of the ribs in a Gothic vaulted ceiling. The Gothic style (see panel, right) uses a wide range of decorative features and medieval carvers rarely made two bosses the same. But despite this wide variation there is an unmistakeable style that distinguishes Medieval Gothic. It is based mainly around stylised plant forms depicted in a fluid and organic style known, somewhat paradoxically, as ‘stiff-leaf’. Although it is indeed ‘stiff’ because it is carved in wood or stone, the effect is of an organic growth creeping along a frieze or wrapping around a boss or capital. This is the look I have gone for with this design. Each ‘leaf’ emerges from under the base and curls upwards to clasp the candle in the embrace of its leaf tips. The stem of each leaf is ‘pierced through’ as is commonly found in Gothic carving. It can be problematical sourcing thick pieces of seasoned wood, as kiln-drying doesn’t penetrate much beyond 100mm thickness, so you may have to look for old oak beams or use ‘green’ oak that has been air dried from logs. ‘Green’ oak carves more easily, but expect some shrinkage cracks as it dries out. For an authentic medieval look you can darken the oak by ‘fuming’ it with ammonia. This is a very simple process using ‘household’ ammonia, which is sold in hardware stores as a strong cleaning fluid, and an airtight plastic crate.

Using the pattern
You can enlarge the pattern to any size that suits you, but I made my candle stand 200mm square x 125mm high. You can reproduce the pattern on an enlarging photocopier, or you can use a scanner or digital camera to copy it into a computer. Either way you can print the ‘plan’ pattern onto an A4 page – or the US standard sheet – to get it to the size you want. The side pattern is for reference only. 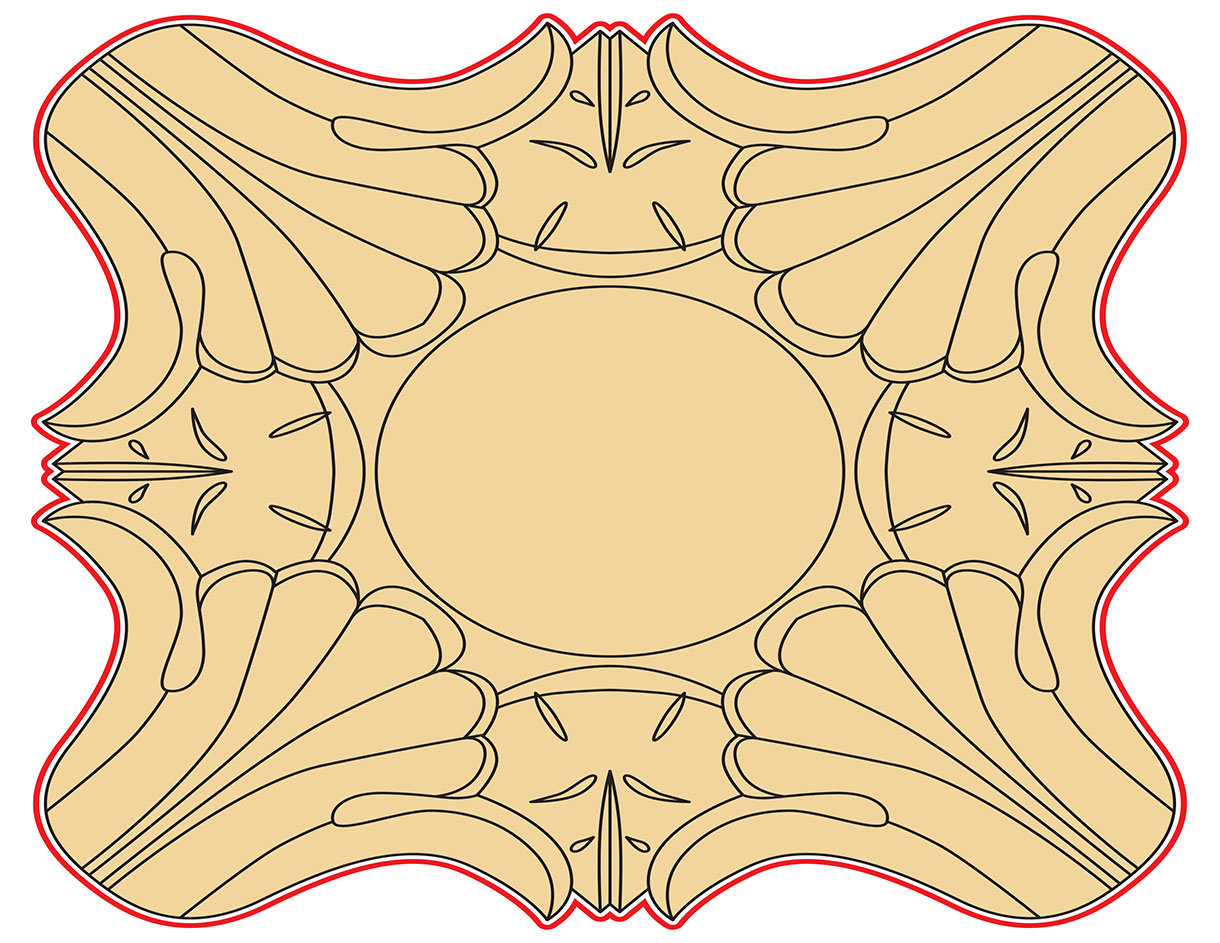 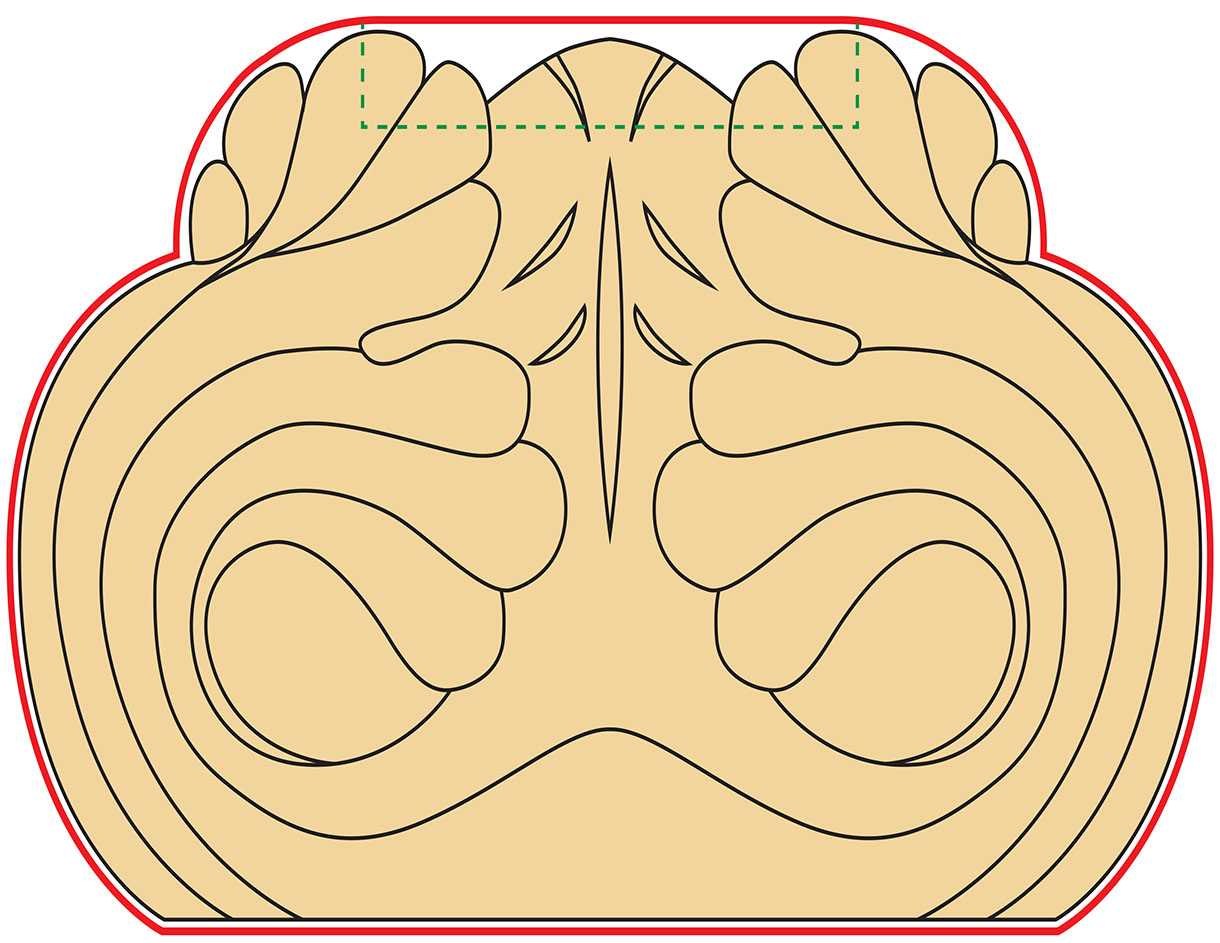 Gothic style
The Gothic style started around 1150 in France and spread quickly to Britain’s churches and cathedrals. Its key features were pointed arches with large windows and delicate tracery, together with steep crocketed pinnacles, flying buttresses and clusters of thin columns soaring upwards to ribbed vaults and carved bosses in impossibly high ceilings. Carved ornament abounded in wood and stone, much of it featuring stylised plant forms such as the ‘stiff-leaf’ ornament used extensively on capitals, bosses and friezes. The wood used was nearly always the oak that was growing abundantly in the surrounding forests and noted for its durability. Medieval Gothic lasted until around 1500, before returning in the spectacular Victorian Gothic Revival that dominated the 19th century. One of the best source books for Gothic design is Pugin’s Gothic Ornament, first published in 1828 and still available today from Dover Publications. 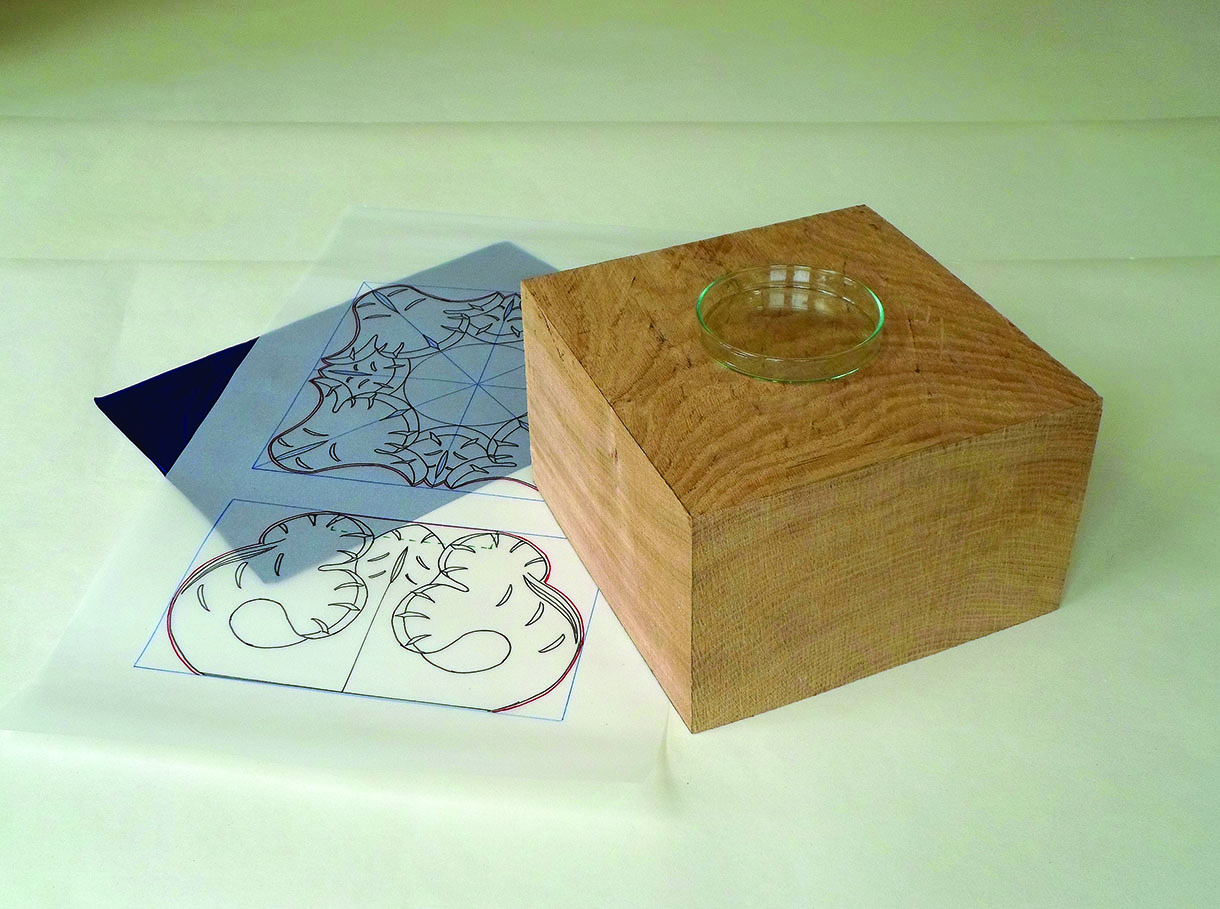 1. Get some oak 200mm square x 125mm thick. ‘Green’ oak is easier to carve than fully dried oak, but a block this thick may develop splits as it dries. You will also need a glass, metal or ceramic dish into which an 80mm thick ‘church’ candle can sit. I used the base of a 90mm Petri dish – the base is 85mm diameter x 12mm deep – which you can buy cheaply online. You will also need carbon paper and a full-size copy of the drawing 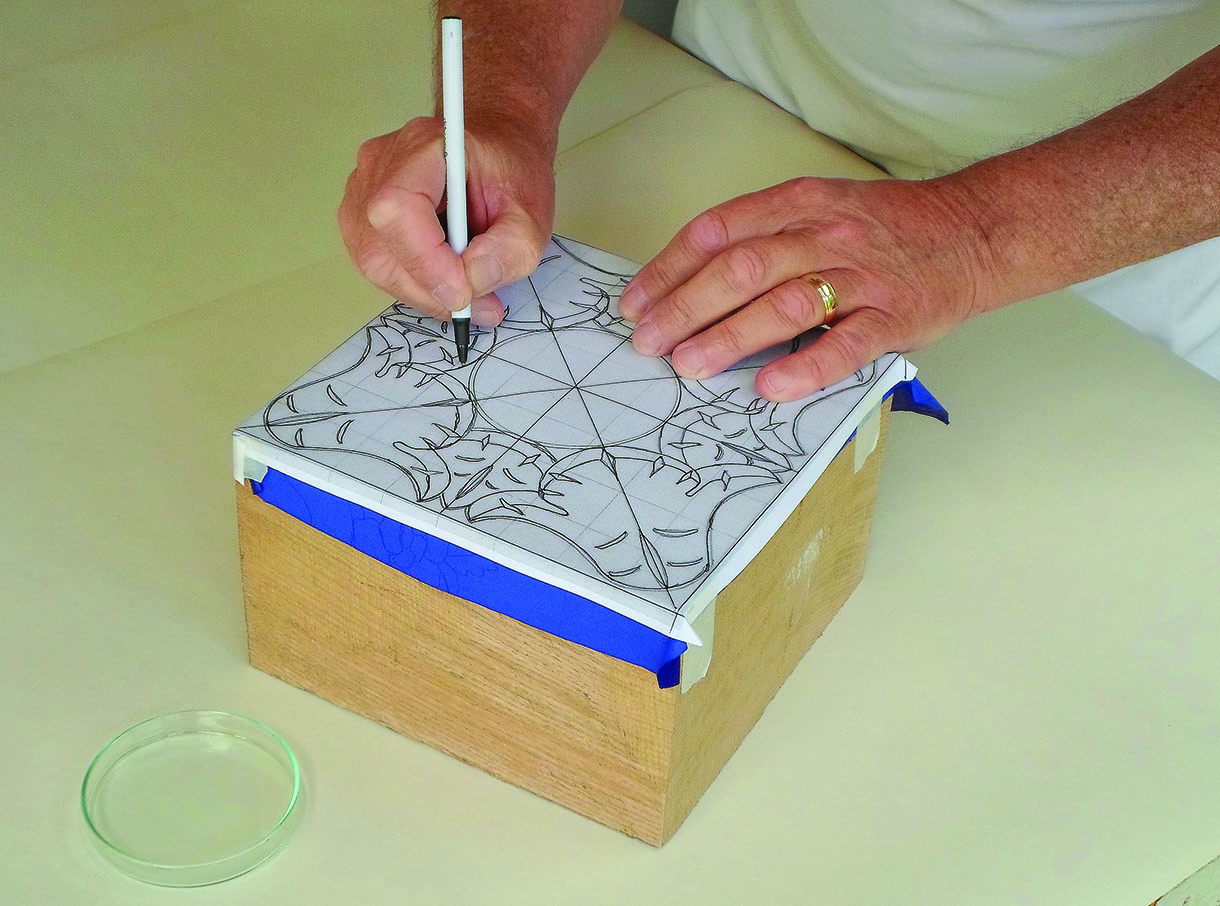 2. Tape the drawing, with the carbon paper under it, securely to the block and trace the top pattern onto the wood. Place your candle dish in the dead centre and draw round it

Roughing out the block 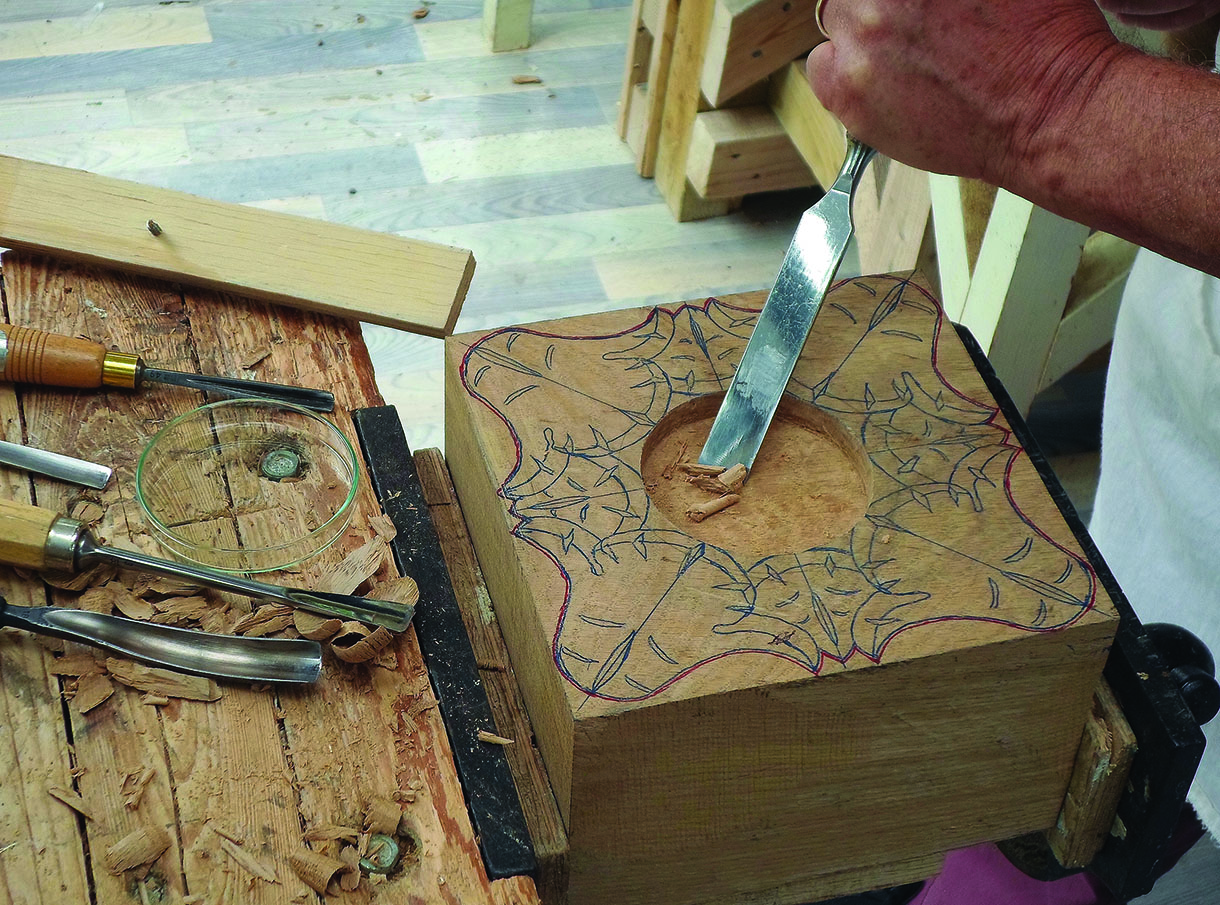 3. Chisel out a circular recess 12mm deep x 85mm diameter in the top centre into which your dish will fit snugly. If your dish is a different size, adjust the pattern to suit 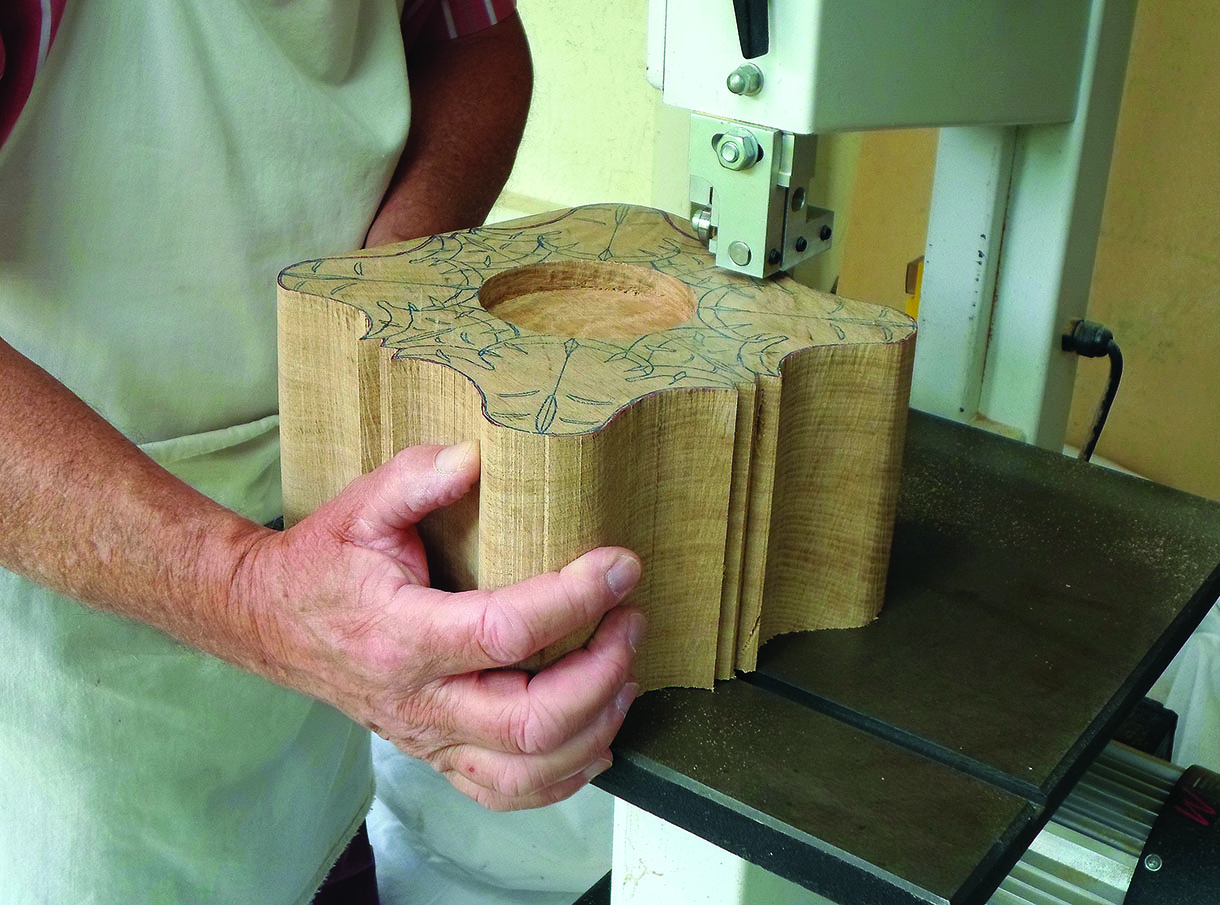 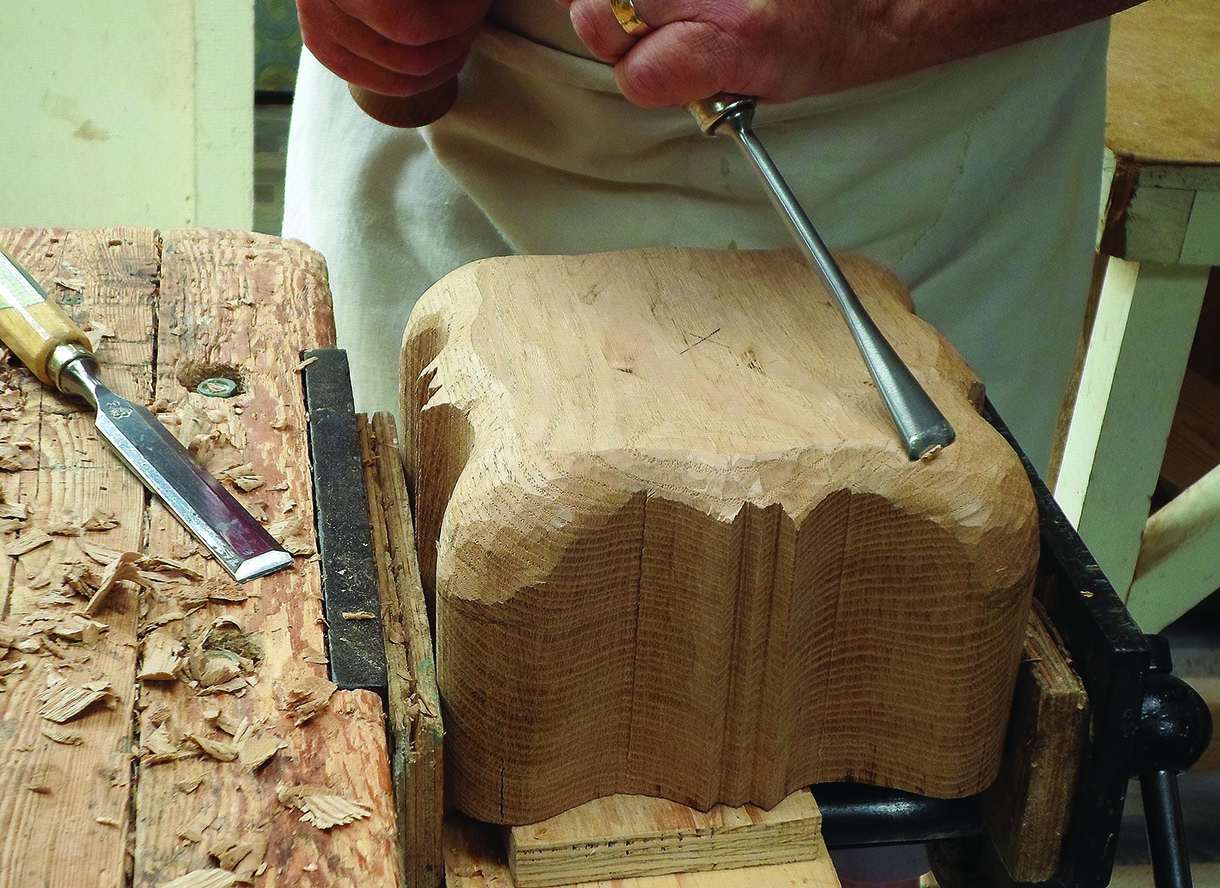 5. Place the block upside down, preferably in a bench vice, and roughly shape the underside as indicated by the side drawing. Err on the side of caution and don’t remove wood you may need later 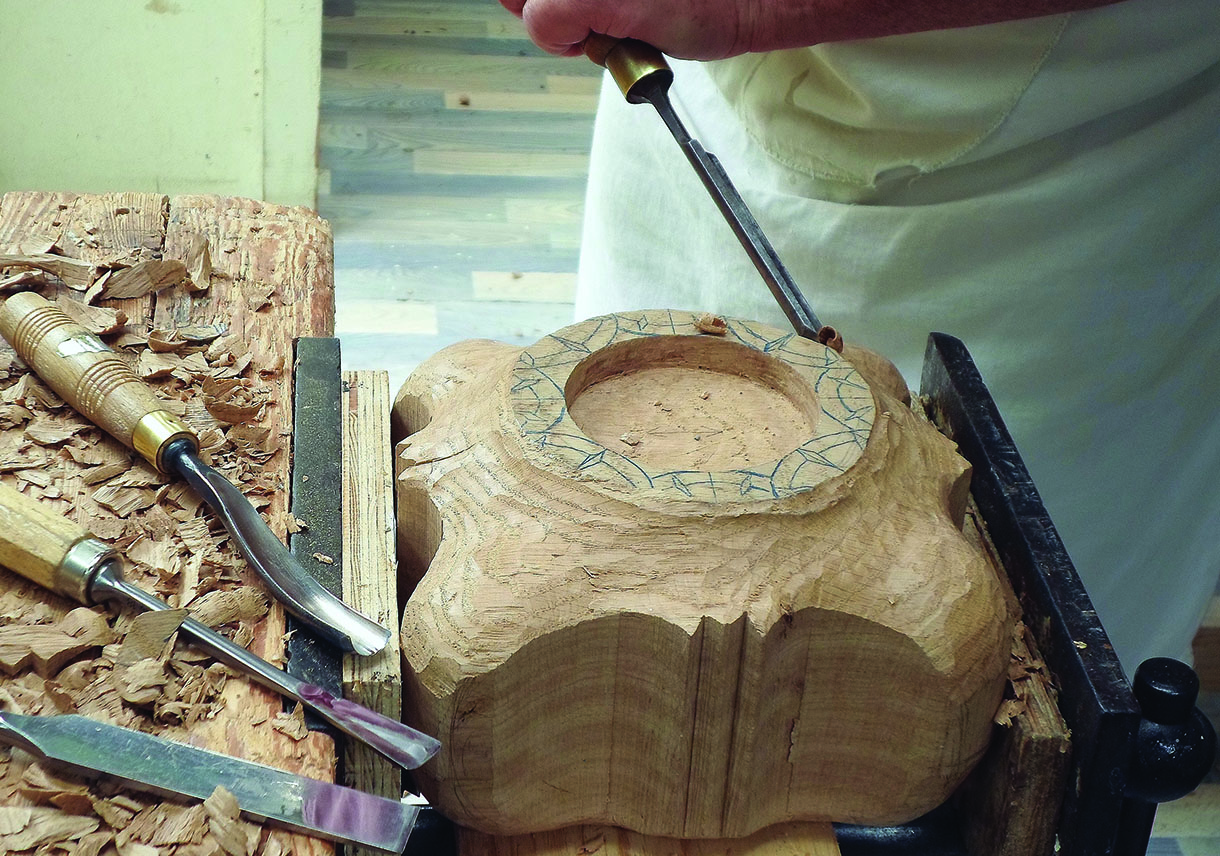 6. Now put it the right way up and, again using the side drawing as a guide, chisel away the surplus wood from the upper parts. Leave a ring about 18mm thick around the centre hole. This will become the tips of the leaves that hold the dish 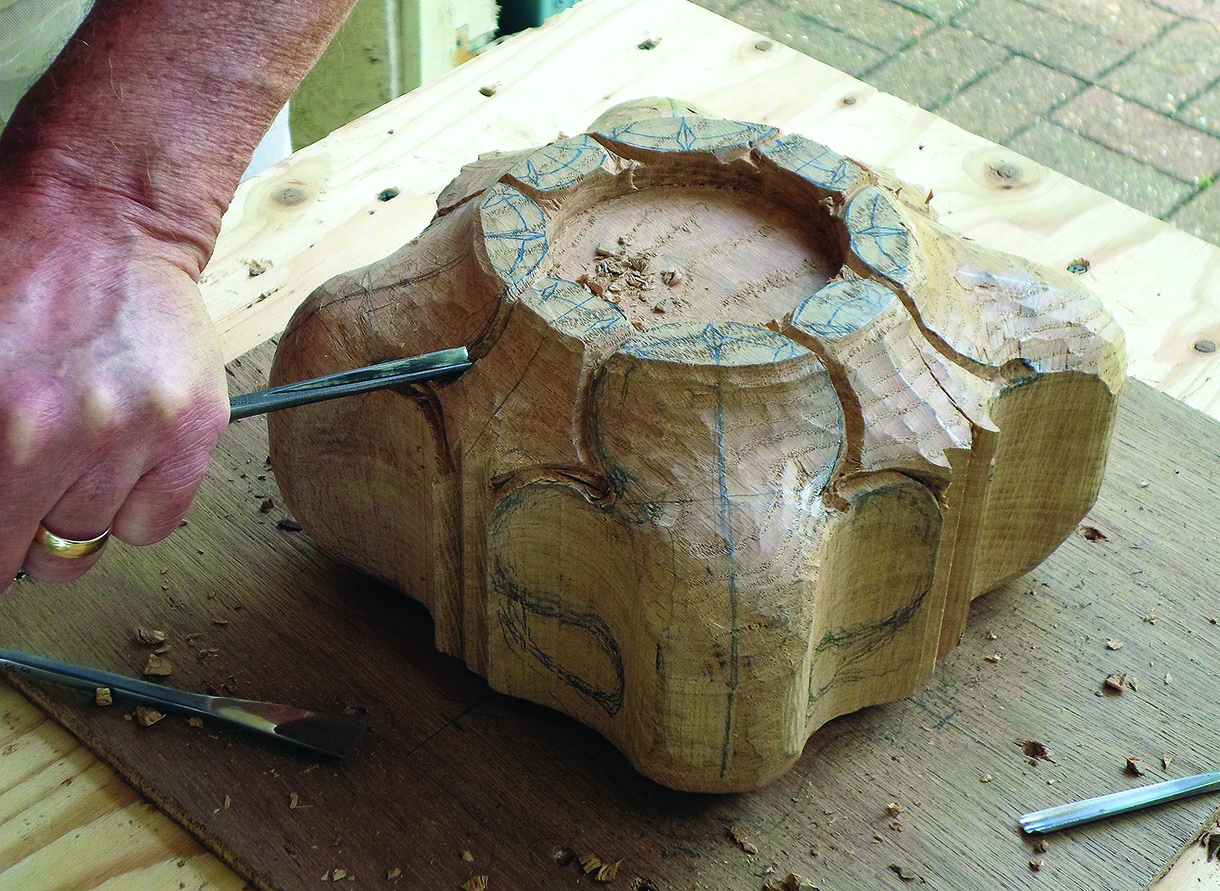 7. We can now start to shape the leaves. Secure the wood, either to a backing board by screwing into the underside as I have done, or to a carver’s clamp. Carefully measure and draw the position of the four main leaves. Use a V-tool to make a defining cut around each leaf 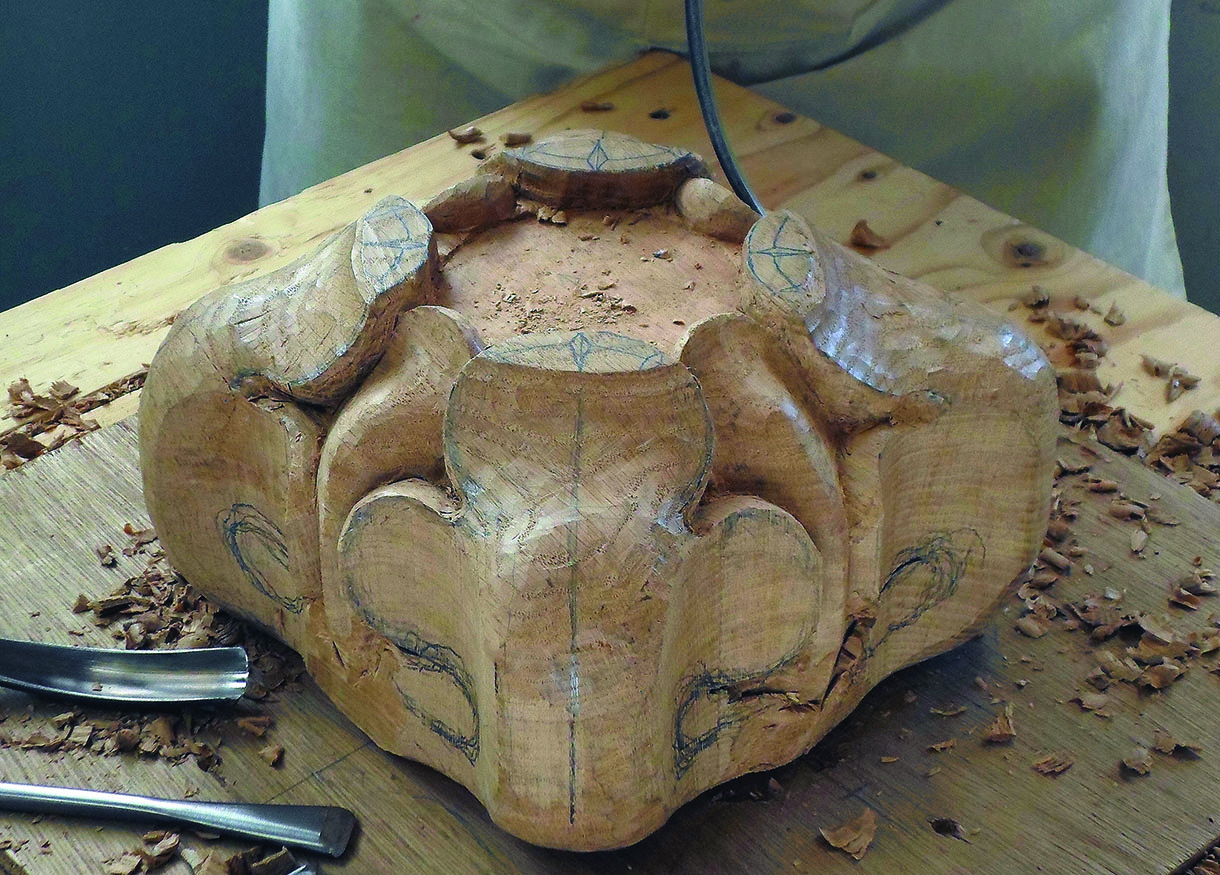 8. Separate the main leaves by carving out the four smaller leaves between them. Scoop out the hollows at the top and sides of the small leaves until you get them back to the depth illustrated. Round over the top of the leaf so it sits snugly around the circle where the candle dish will sit 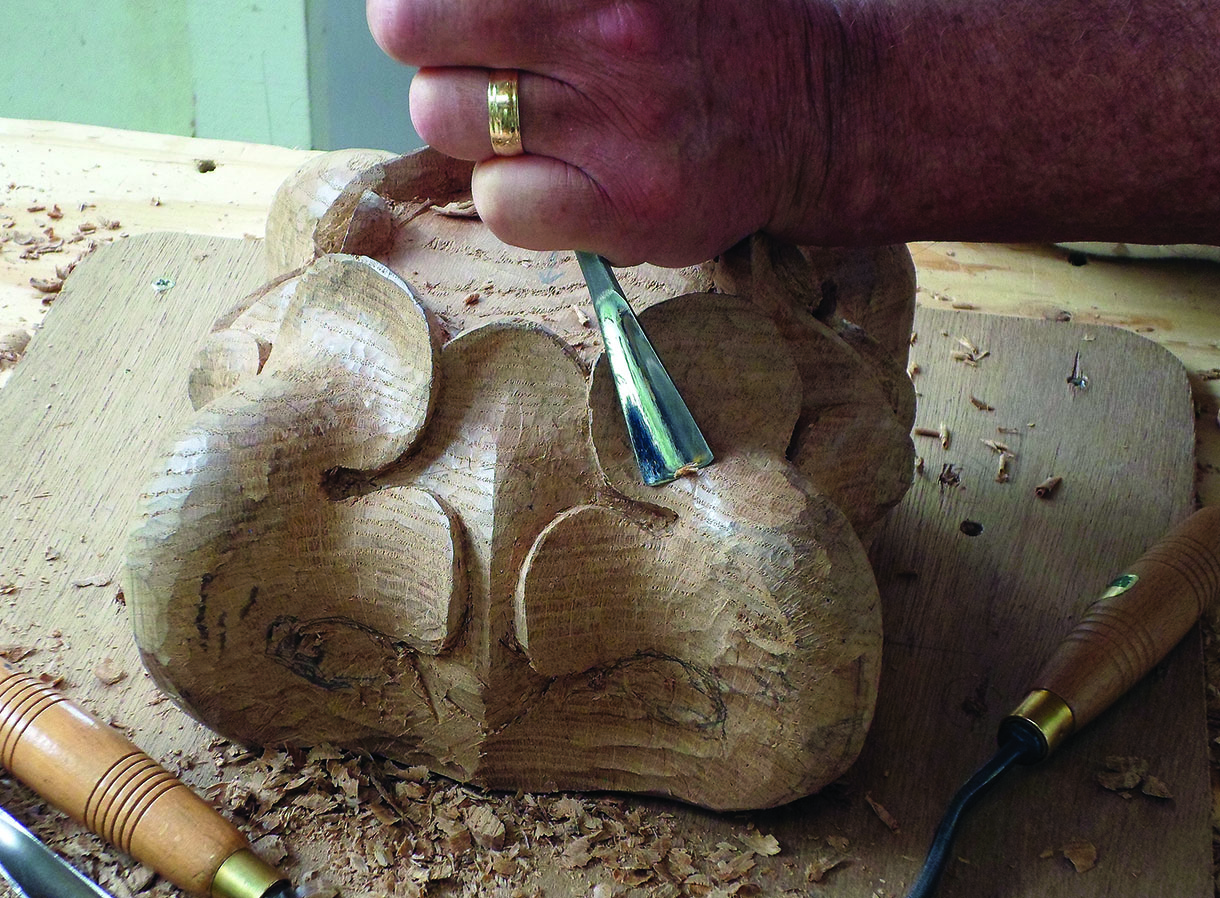 9. Now to the most significant feature of the carving – the four trefoil leaves. Shape the curve of the top leaf where it clasps the candle dish. Cut the two ‘eyes’ in each leaf with a No.8, 8mm gouge and scoop out hollows around the edge of each trefoil so that the whole thing wraps around the corner of the block. You may need to adjust the smaller ‘in-between’ leaves again to achieve the wrapping effect. Carve the corner ‘stem’ so it is the right thickness and flows smoothly from the top to the underside

10. To shape the lower parts we need to place the piece back in the bench vice, with some wood in the candle circle to protect the leaf tips from the vice jaws. Hollow out under the lower part of each leaf and shape the stem so it merges smoothly into the base of the ‘in-between’ leaf 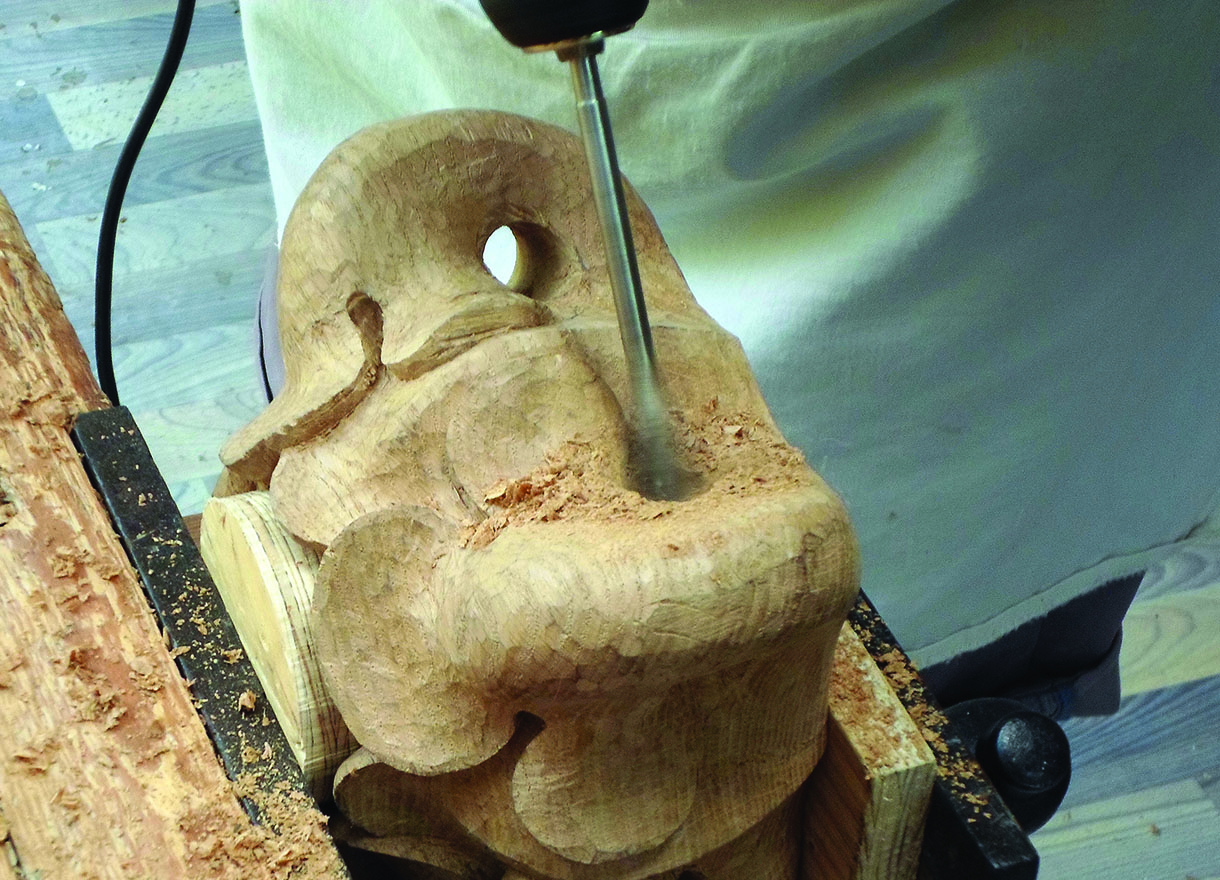 11. At this point we can drill through the ‘pierced’ corners with a 20mm drill. Take extra care to place the centres all in the same position – 37mm up from the base and 45mm out from the centre line. Try to get the drill holes to line up from both sides of the corner 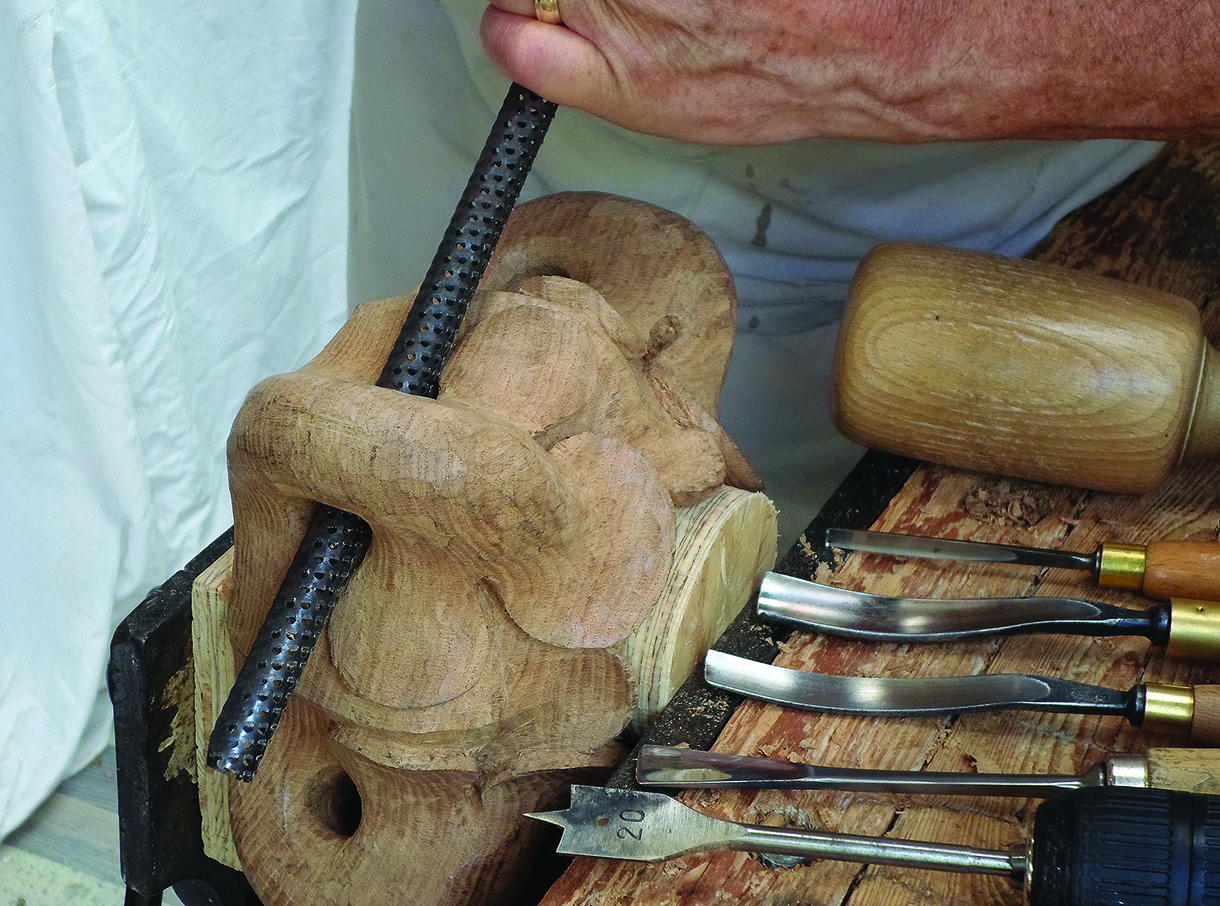 12. You can use a wood rasp and gouges to finish the hole neatly and carefully shape the stem around it 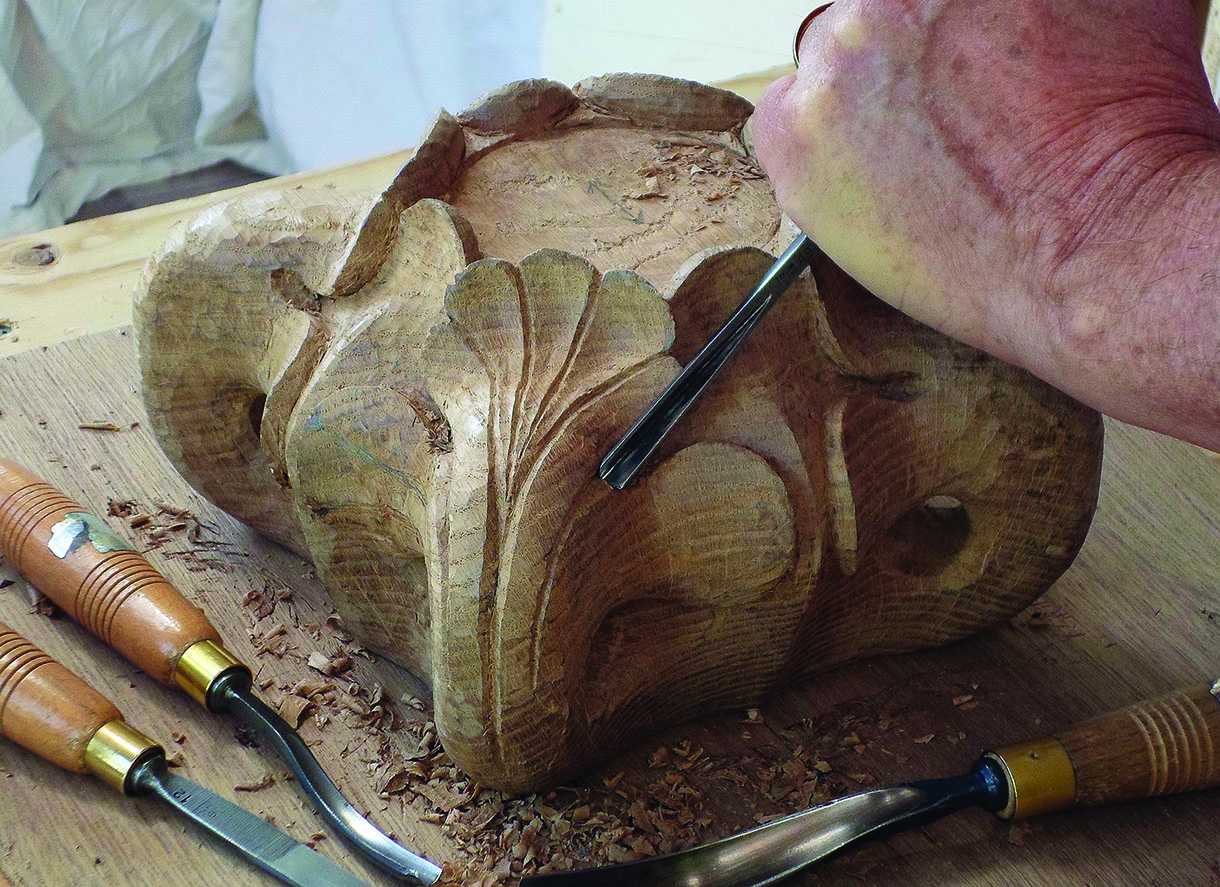 13. With the shaping finished, we can now begin to carve the surface detail. Use a V-tool to cut a deep vein from the ‘eyes’ of the corner leaves back along the stem, gradually getting thinner towards the bottom. Divide the top segment of the main leaf into five sections using the V-tool and reshape the top edge. Scoop out the top three sections into concave hollows and merge the V-tool cuts into a large central vein down the middle of the stem 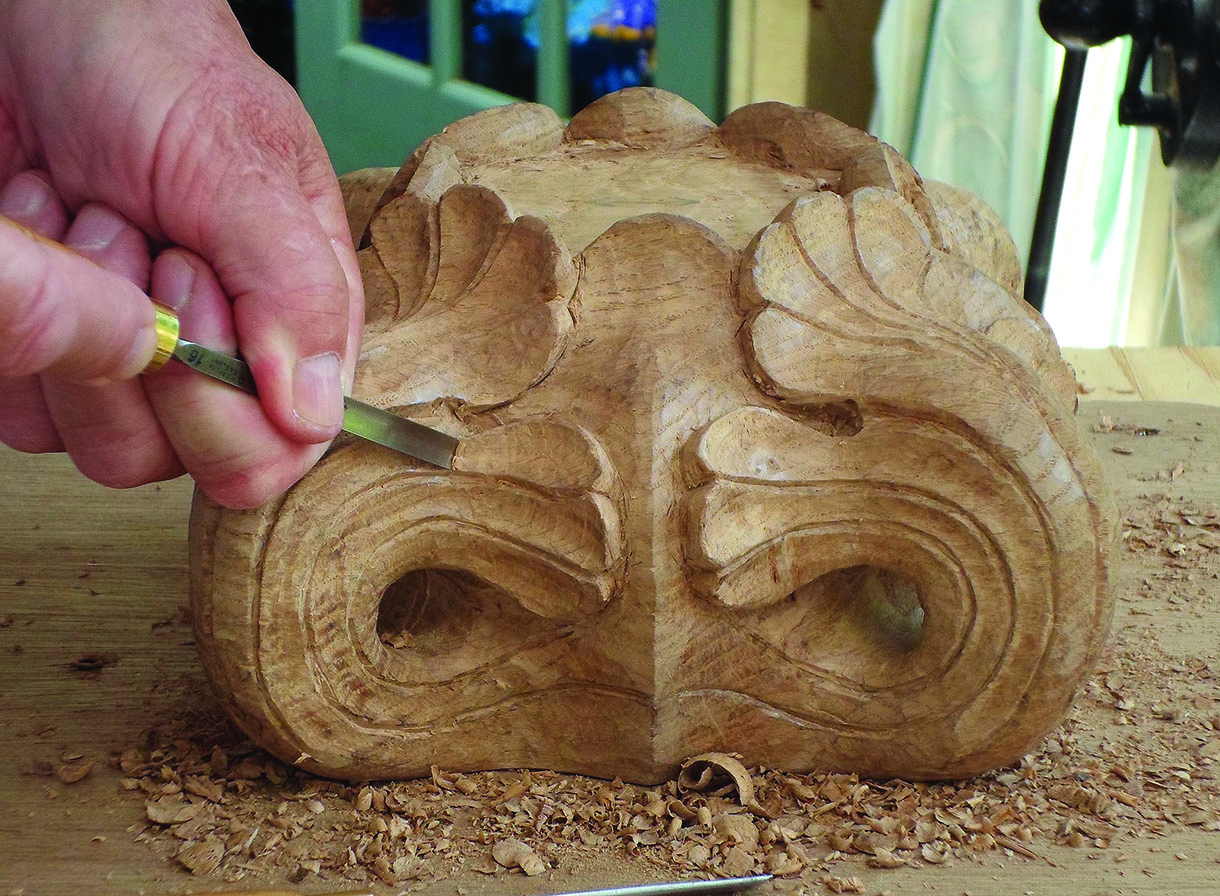 14. Divide the side segments of the main leaf into three sections and use the V-tool and a small gouge to run grooves and veins round the sides of the stem and into the lower centre 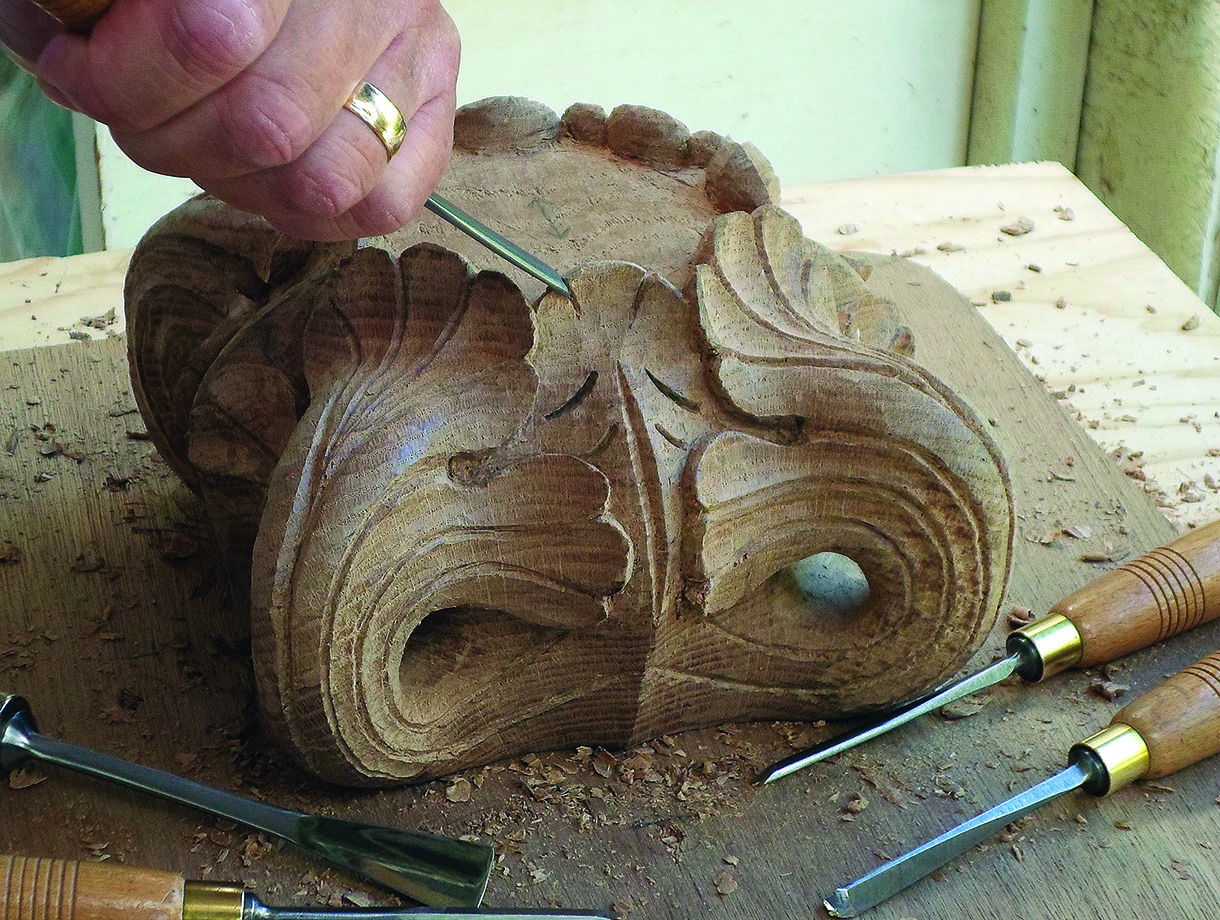 15. The small in-between leaf can now be finished with several deep ‘gashes’ using a No.3, 10mm gouge and a V-tool. There are two curved gashes made in the top of the leaf; a deep one straight down the centre; and then two more curved gashes each side of the centre line 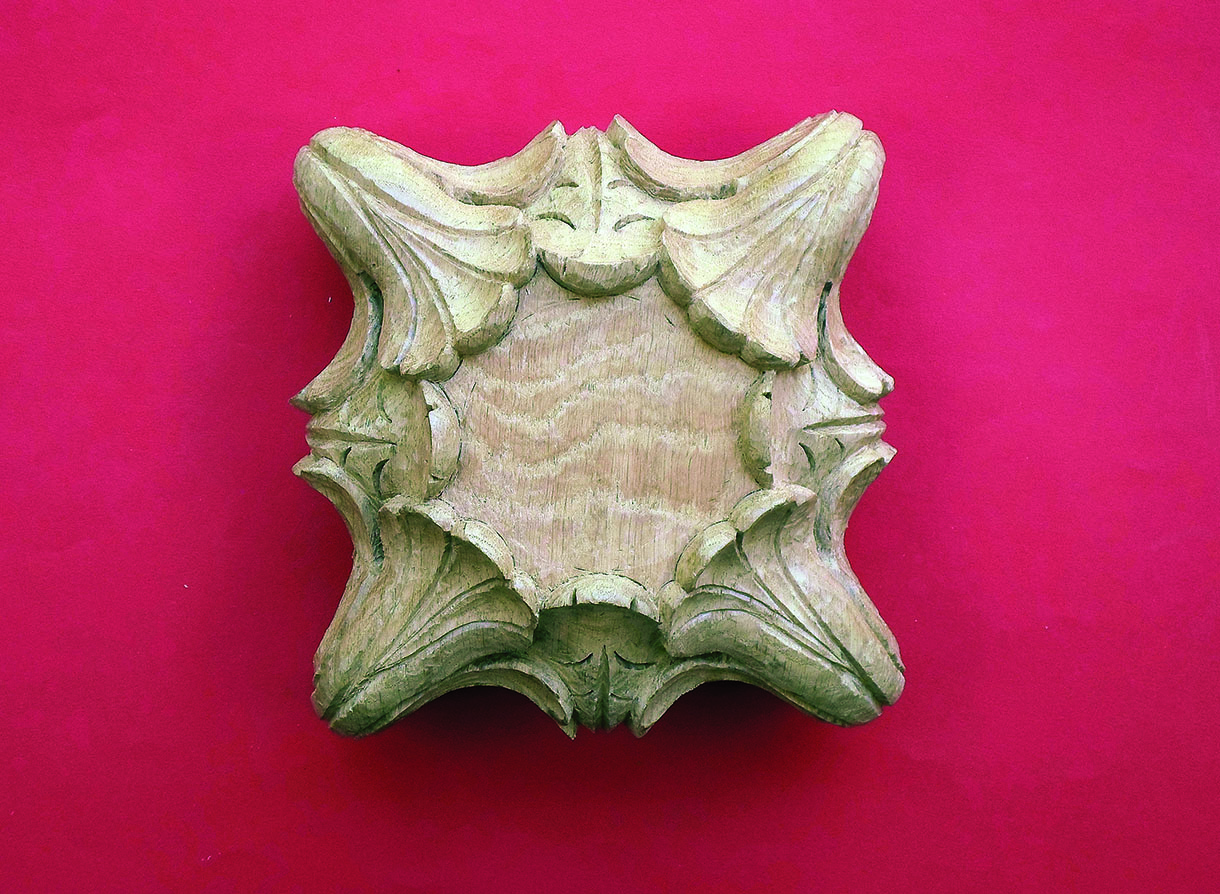 16a. The candle platform can now be levelled off around the leaf tips, and the underside of the stems
can be tidied up in the vice 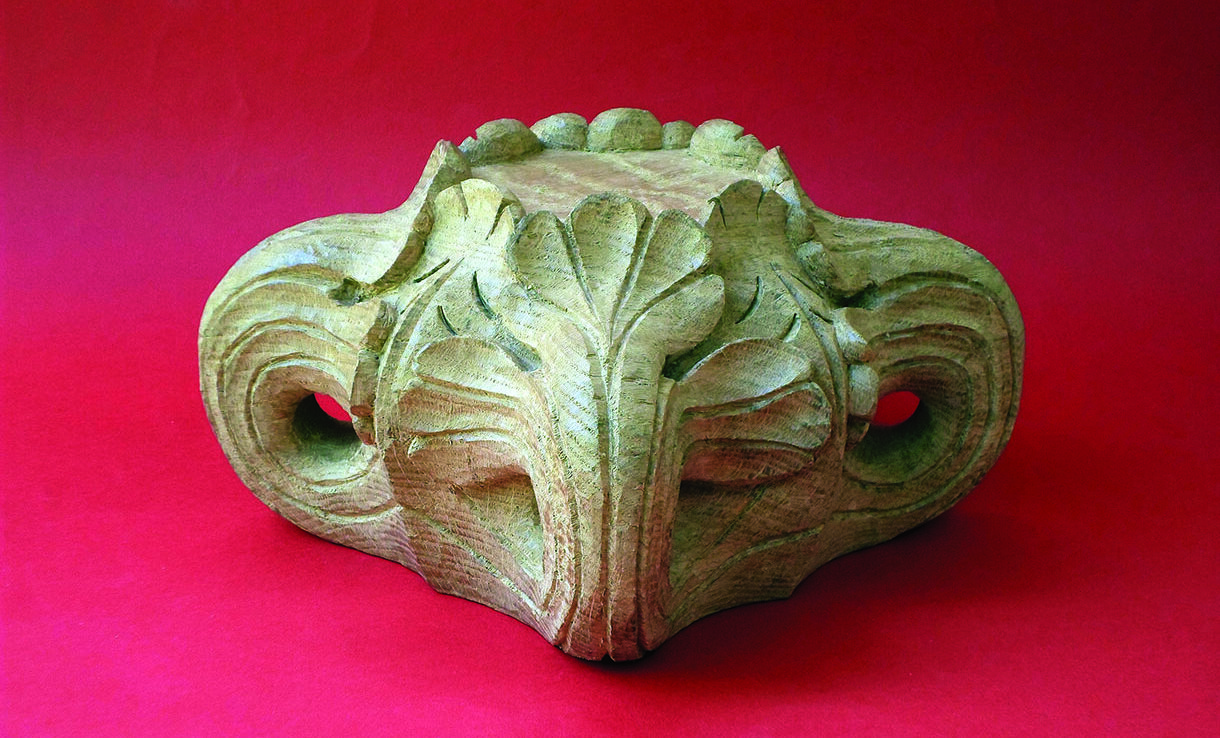 16b. The carving work is now completed and should be left with a good tooled finish 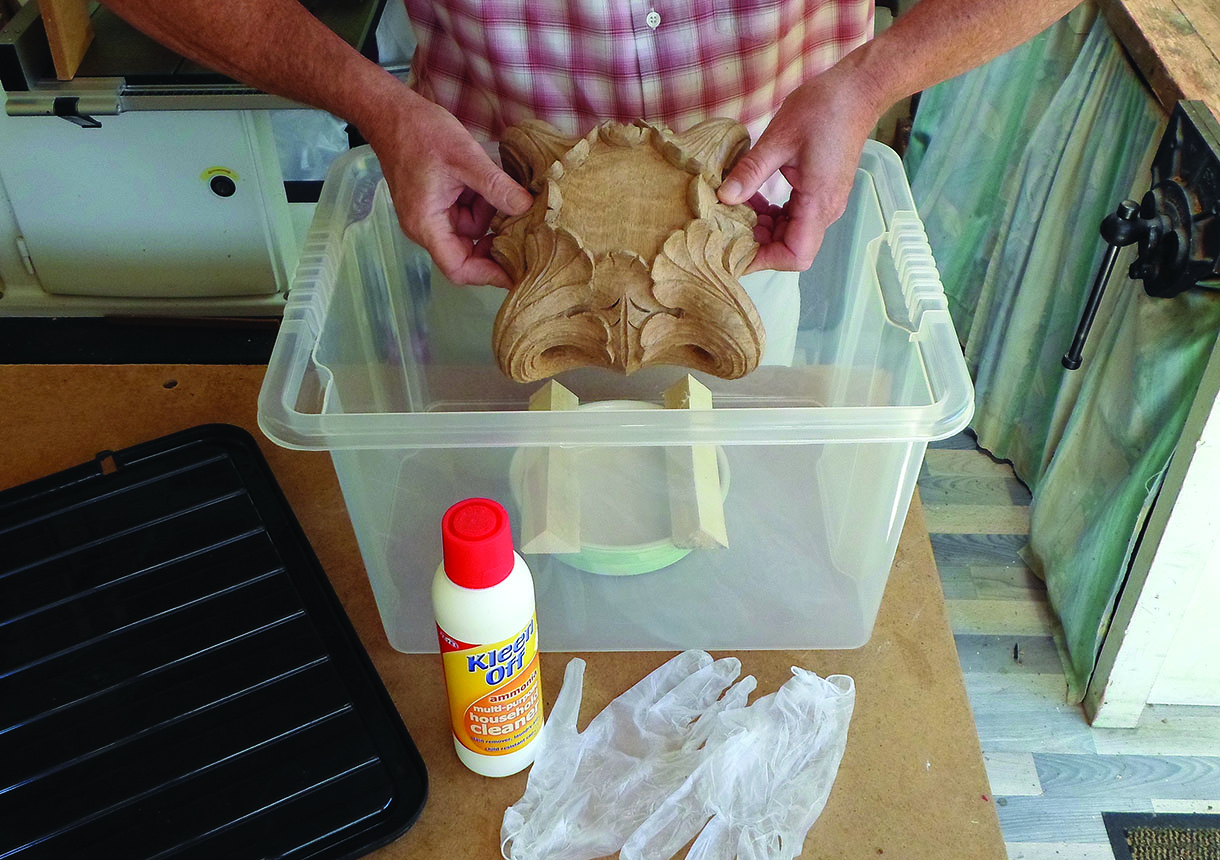 17. For an authentic medieval look it is possible to darken the oak by ‘fuming’ it with ammonia. To do this, get an airtight plastic tub and put about 50–80ml of ‘household’ ammonia (see panel below for more details about where to buy this and how best to use it) into a shallow dish. Wear eye protection and rubber gloves when pouring the ammonia. Work in a well-ventilated space and try not to get too close to the fumes as they may sting your throat and eyes. Place the carving in the tub, raised above the dish on wooden supports, and then seal the tub 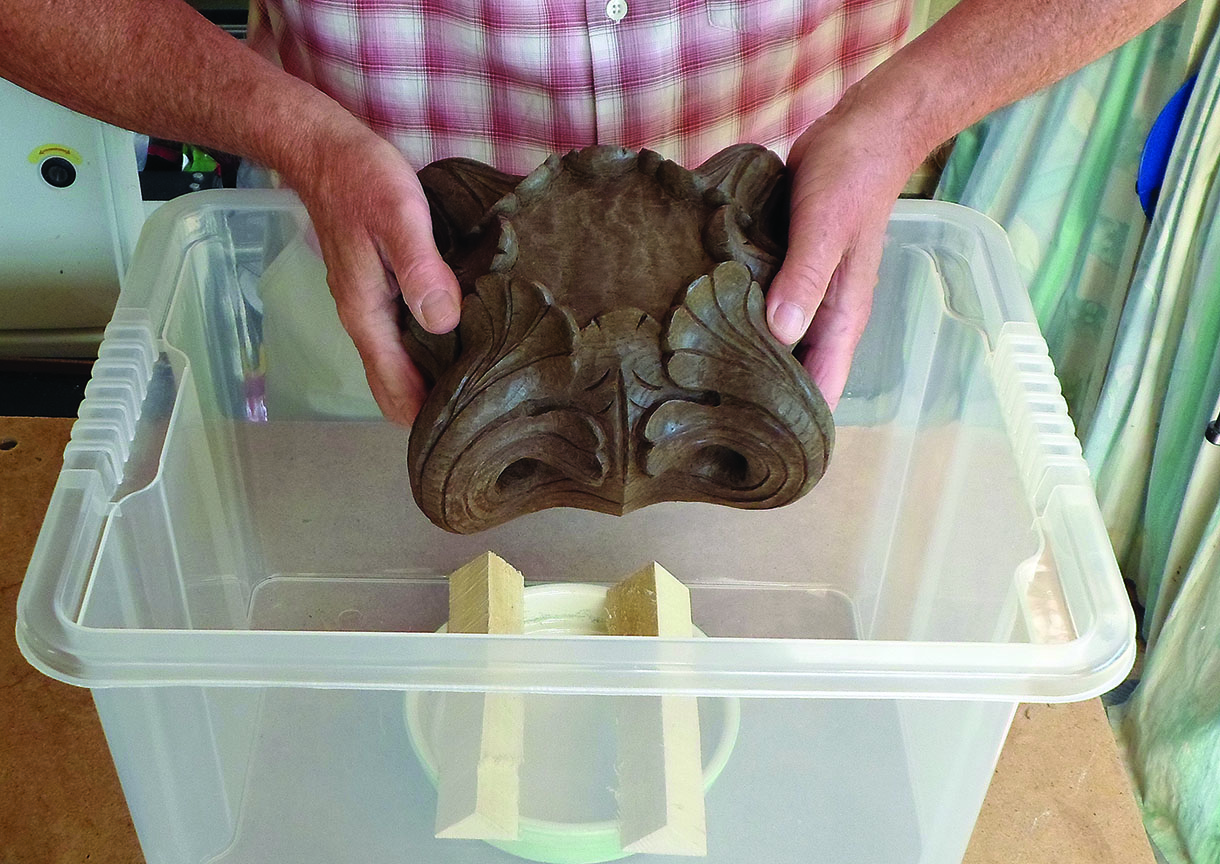 18. Leave it until the oak ‘ages’ to a pleasing dark brown – about 6–12 hours depending on the temperature, the concentration of ammonia and the amount of tannin in the oak. Open the tub, stand back while the fumes disperse and take out the carving 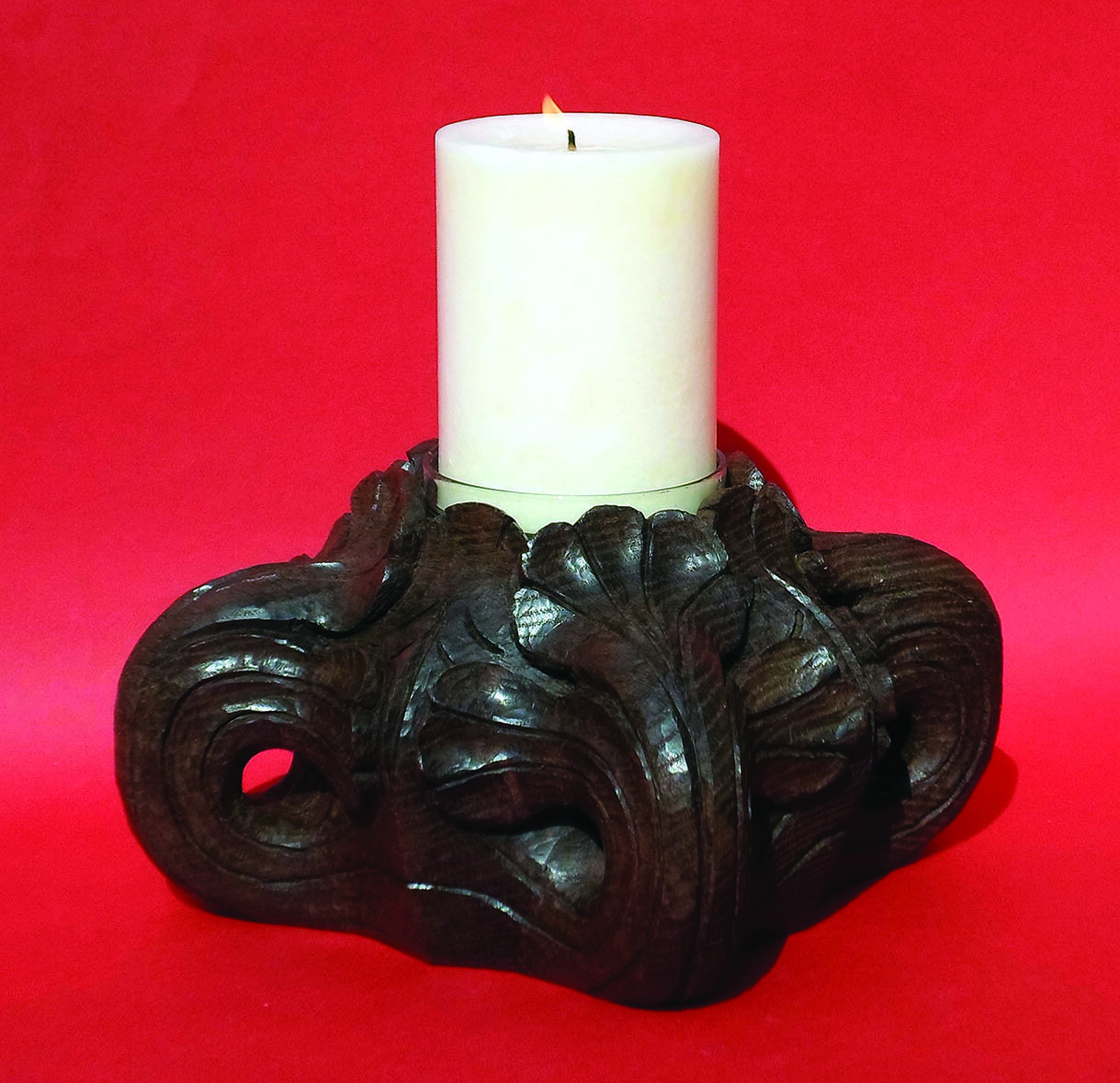 19. The finished carving now looks like a relic from the Middle Ages. Go over it with a dark wax polish and set in place the glass dish and 80mm-thick candle

Fuming oak with ammonia
Ammonia fumes change the colour of oak to a rich dark brown by acting on the tannins in the wood. It looks more natural than stains as it replicates the natural darkening caused by centuries of exposure to air, but at the rate of about a century an hour! The tannins are only present in the ‘heartwood’, and the paler ‘sapwood’ near the bark will not be darkened, so avoid pieces with sapwood. Use ‘household’ ammonia, a product sold in hardware stores as a strong domestic cleaning fluid. Although the fumes are quite pungent, it is safe to use in a well-ventilated place using rubber gloves and eye protection. You do not need industrial ammonia, which is a more hazardous substance.