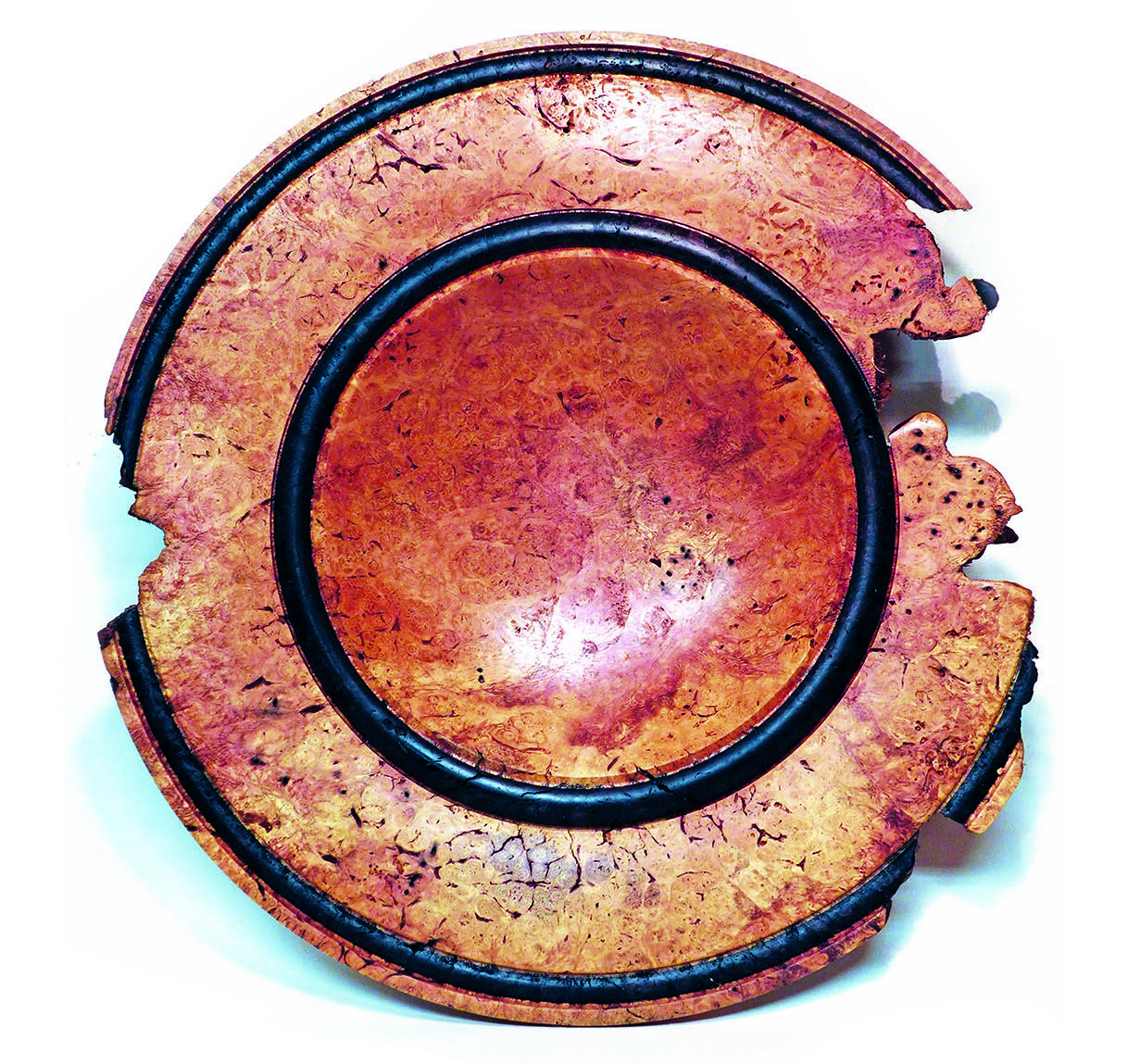 Andy Coates makes a bowl for an absent friend

Early in December a woodturning friend passed away, and because everybody assumed I’d know, I wasn’t told. In fact I only found out when I spoke to his brother, Colin, who had just returned from the funeral. It was a shock. I’d known Phil for almost as long as I’ve been turning and he had always been supportive and helpful; another sad loss in our tiny woodturning world.
A few days later Phil’s brother, Colin, arrived at my door clutching an obviously heavy plastic bag, from which he pulled a large, misshapen, oak (Quercus spp.) burr. The burr, it transpired, had been sitting in Phil’s workshop waiting to be turned into a bowl for his wife, Jill; but as these things go it never got turned, illness preventing Phil from making the piece for his wife. Would I turn something from it to present to Jill? The answer, of course, was yes. I’d be honoured.
This burr had a problem. It had a strange segment apparently missing, which could have been an old, now-healed-over saw cut, or perhaps the tree grew against a fence which caused the unusual blemish? Either way it presented some design considerations if I was going to save as much as possible from the burr.
Burr is a popular choice for woodworkers and woodturners, and it goes without saying that the wood is highly decorative, interesting and worthy of our efforts to make things from it; but it can present problems, especially for the novice turner.
It was whilst considering these issues that I had the idea to make an article out of the process. What better way to remember a friend than to detail the production of the memorial piece?

So what is a burr?
Opinion is still divided on the ‘definitive’ answer to this question, but several causes are at least possible and likely. Burr (or ‘burl’ to our American cousins) is a growth on the trunk of a tree; this can be above ground, or more commonly below on the root stock. Essentially the burr is a large bundle of small growths, twigs and branches, that combine to form the typical growth often seen on trees. These branchlets, perhaps hundreds of them, can be the result of the tree being under stress. In essence they are a survival response to the stress. The stress may be the result of insect attack, viral or fungal infection, or damage due to wind, weather, animals or man. Usually burrs are sliced off the tree in line with the trunk, and are then used as they are cut. Occasionally though, the burr may extend into the tree, and sawyers would then mill the tree as usual producing through-and-through burr boards. This is relatively rare and consequently can be expensive.
When burr is sliced from the tree the parallel cut surface will contain patches of tightly packed pips, sometimes called ‘cat’s paws’, and these are essentially the end grain of hundreds of tiny branches that never grew to fruition. Burr can also be cut perpendicular to the tree, which produces a different, but nonetheless attractive radial pattern. In terms of working the resulting wood, there is little difference in the way the burr has been cut: burrs are almost devoid of any discernible grain direction, so working the wood is problematic either way. Freshly cut burrs are better turned sooner rather than later, as they are particularly prone to cracking and severe checking. Rough turning is an option here. Kiln drying is also an option, but conventional kilning often results in severe checking and cracks. Vacuum kilning is claimed to reduce this problem. For the hobby turner, rough turning may be the best solution. Many turners do turn burrs from freshly cut to a finished object, but the surface will ‘wrinkle’ as the wood dries out. This is a result of pulling back of the effective end-grain at the pips. For many, this is considered a bad thing; personally, I like the effect! 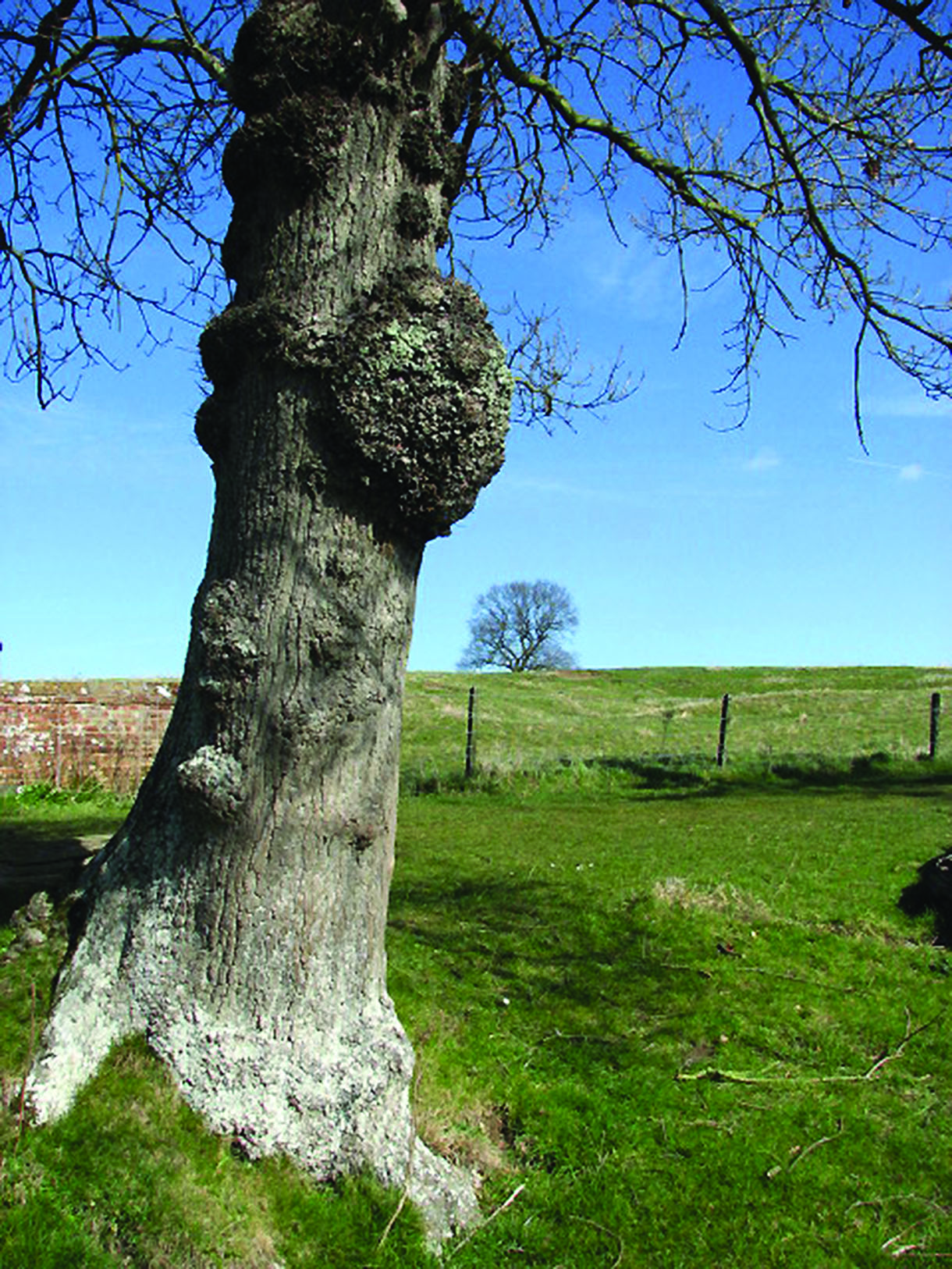 Oak tree with burrs in Norfolk

Working burr wood
There are a number of areas of potential problems where burr wood is concerned:
• Dirt, grit and stones embedded in the bark
• Loose bark
• Voids within the wood
• Lack of grain direction
• The wood can be coarse and hard

Making the memorial bowl
The blank I was given had an odd ‘fault’, which presented a problem and seemed to reduce the design opportunities. As supplied, the burr was 480mm by 410mm and 100mm deep, but the missing segment was a problem. After some thought, I decided to eschew the common practice of using the burr whole; instead scribing a large circle on the cut face to reduce the impact of the missing segment. A second issue here was the severe off balance that I was likely to have to overcome. As it transpired, this was not as much of a problem as I had imagined.
Prior to mounting, any loose bark needs to be picked out using an awl or similar tool. Some people actually pressure wash all the bark away prior to turning, which is a good idea, but as this burr appeared to have been cleaned and was kiln dried, I took the worst of the loose sections off and decided to deal with the bark during the process. When turning burr, it is highly advisable to wear a full-face helmet. Burr is unpredictable and flying debris very common. It simply is not worth risking injury in working it unprotected.
The mounting options for burr are pretty much as you might expect for other blanks, but we do need to ensure the hold is secure and safe, so particular care should be taken. It is not always clear just how deep the clean wood is, so do not assume you have a safe hold; ensure that you do.
Of the common mounting options, I chose the faceplate ring as this provides for a secure hold and the convenience and safety of using the scroll chuck. I used twin thread wood screws and ensured that they went deep in to the burr. Using a timber crayon, I marked the path of the ‘step’ on the other side of the blank. I also indicated the maximum bowl section I thought might be achieved, to avoid breaking the wall of the step. Any guidance you can provide for yourself will make the turning of burr safer and less stressful.

Tools for the job
Tool selection for burr is a simple choice: strong and sharp. Burr can be physically tiring to turn; the wood is hard, often cutting intermittently and the constant concern over flying debris all take their toll, so be sure to re-sharpen tools frequently to help keep the actual cutting process as stress free as possible, and take it slowly.
Cutting with bowl gouges shouldn’t present any real problems, but occasionally burr can prove difficult to cut cleanly due to the lack of grain direction. In this situation burr often responds better to a scraper. However this can be problematic: burr, as we have already established, can have voids and bark inclusions and a heavy hand with a scraper can result in a nasty catch on such areas, so take light cuts and keep the cutting edge at about 45° sheer. 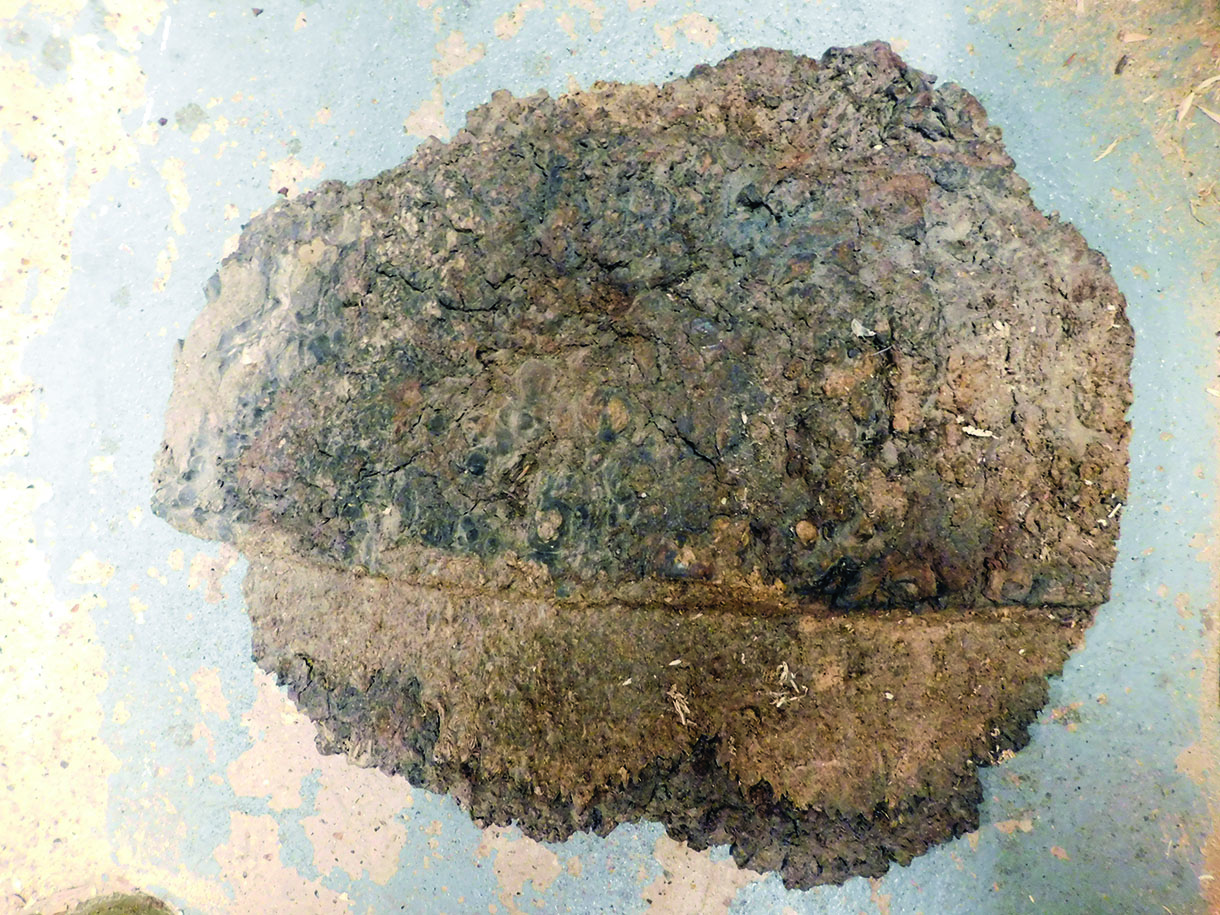 Burr with an unusual flaw 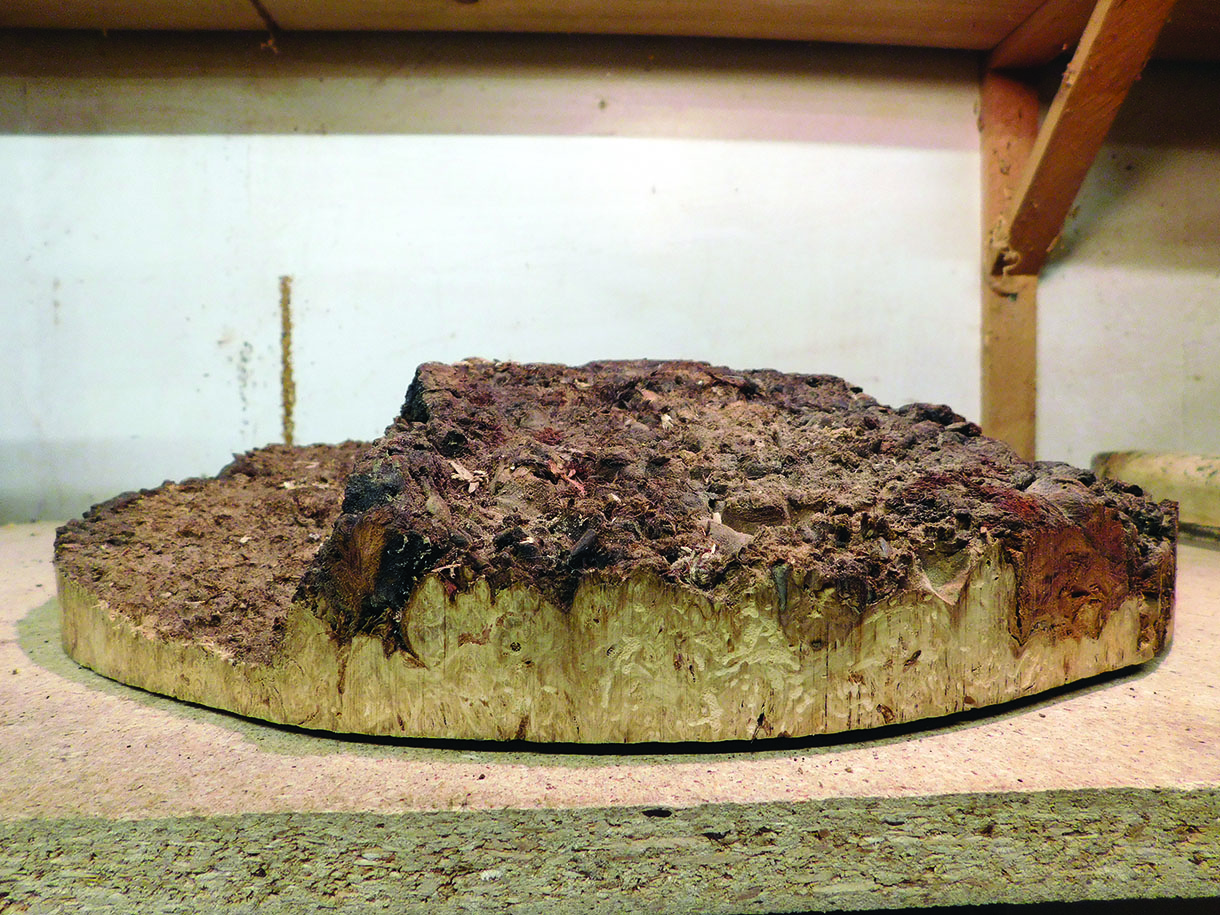 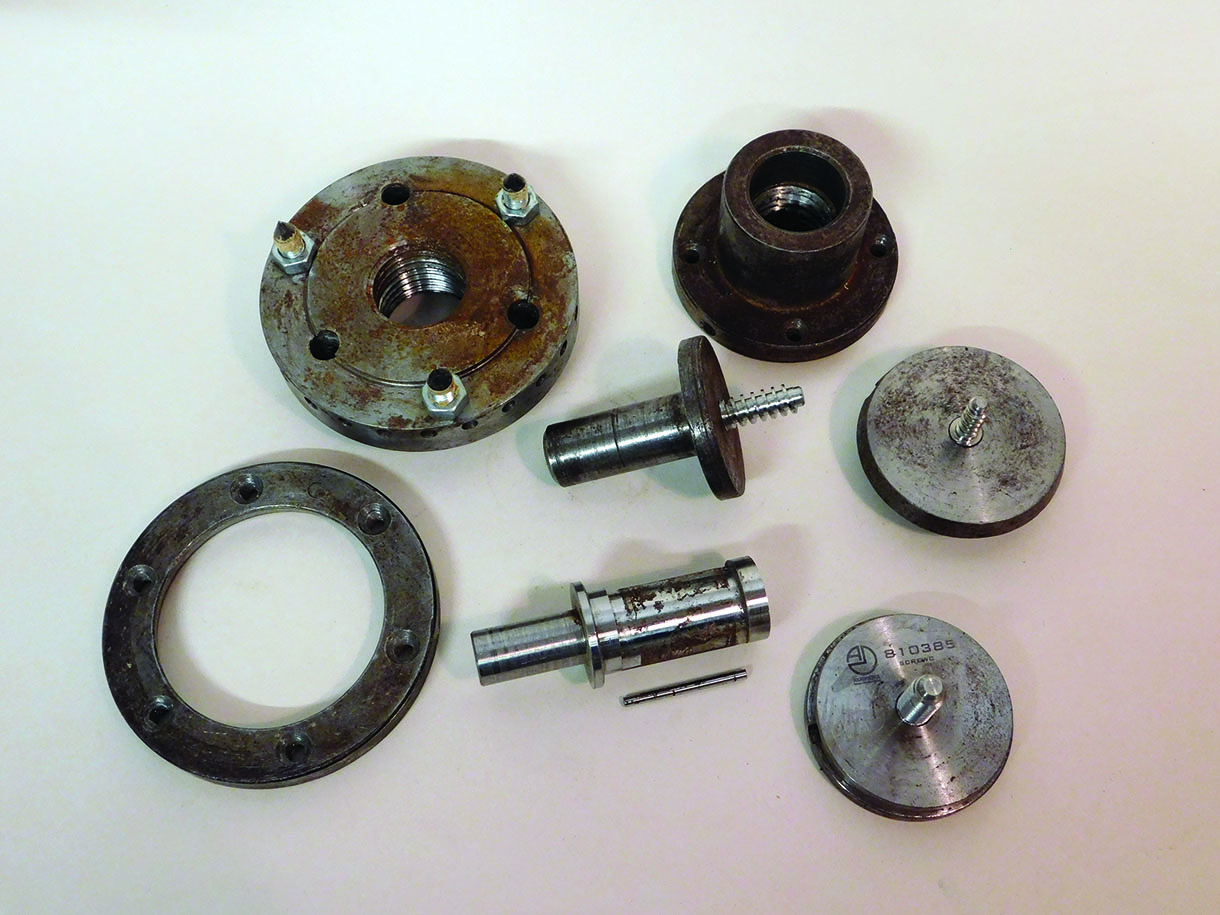 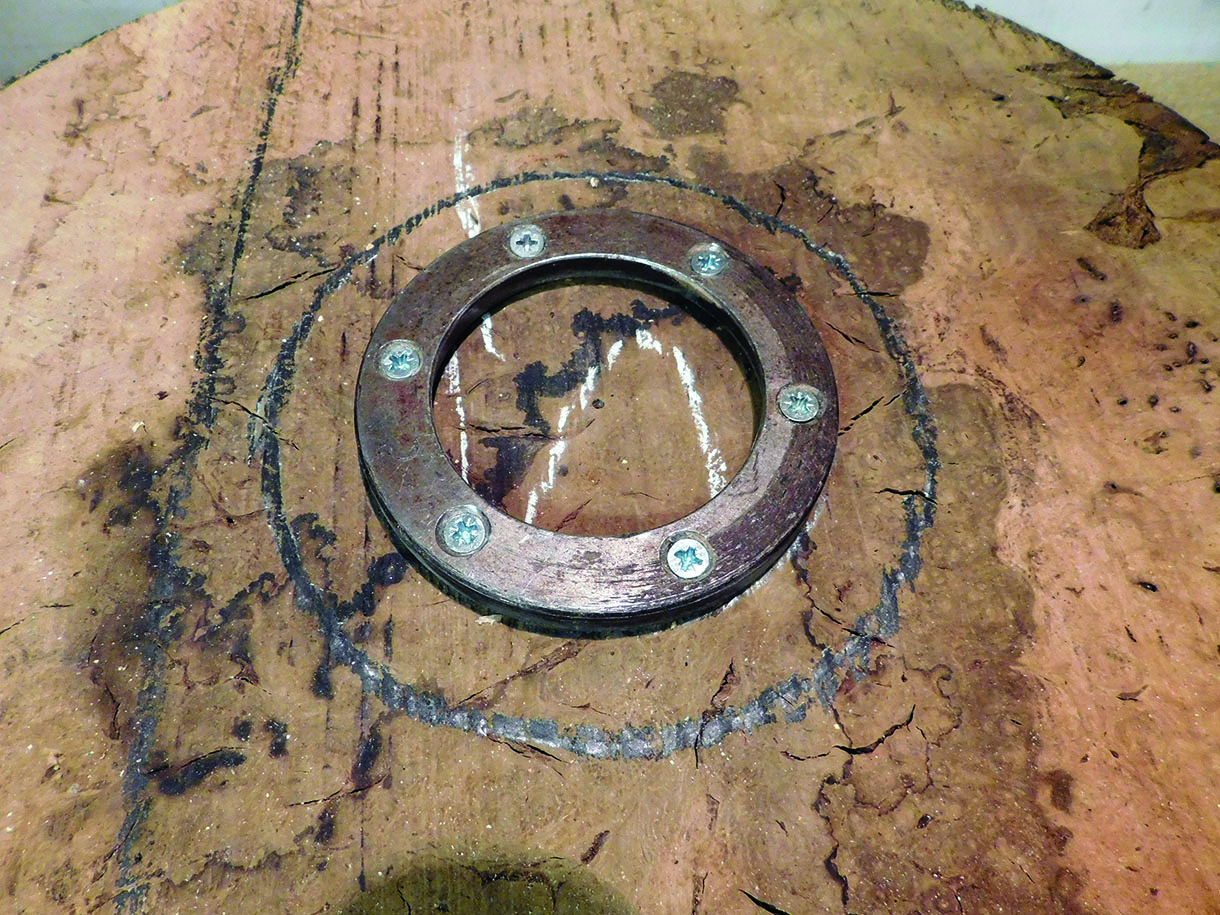 Turning and finishing the outer shape
Turning the outside shape is no different than for any other bowl; the process however, can be slower and more physically demanding. The preparation for remounting can be problematic.
Take some time to ensure that all loose bark is removed and then begin to prepare the flat area for a recessed holding point. You can see the potential problem of an incomplete recess. Work back into solid wood until you have enough to form the recess. You may be forced to compromise here, but safety and surety of hold should always be your paramount concern. If in doubt, a sacrificial block could be glued to the flat surface and the holding point cut into it. The block can be turned away later by reverse-turning the bowl. If you choose this option then hot melt glue is the option I generally use, but traditional wood glues can be employed provided sufficient curing time is allowed for. Double check the glued joint prior, and during, any subsequent turning.
Having turned the outer shape, abrade to your chosen finish. With so many voids and irregular edges, abrading burrs is best achieved with a firm pad on an arbor. Use a light touch to avoid the possibility of a catch and of differential abrasion between hard and soft areas. 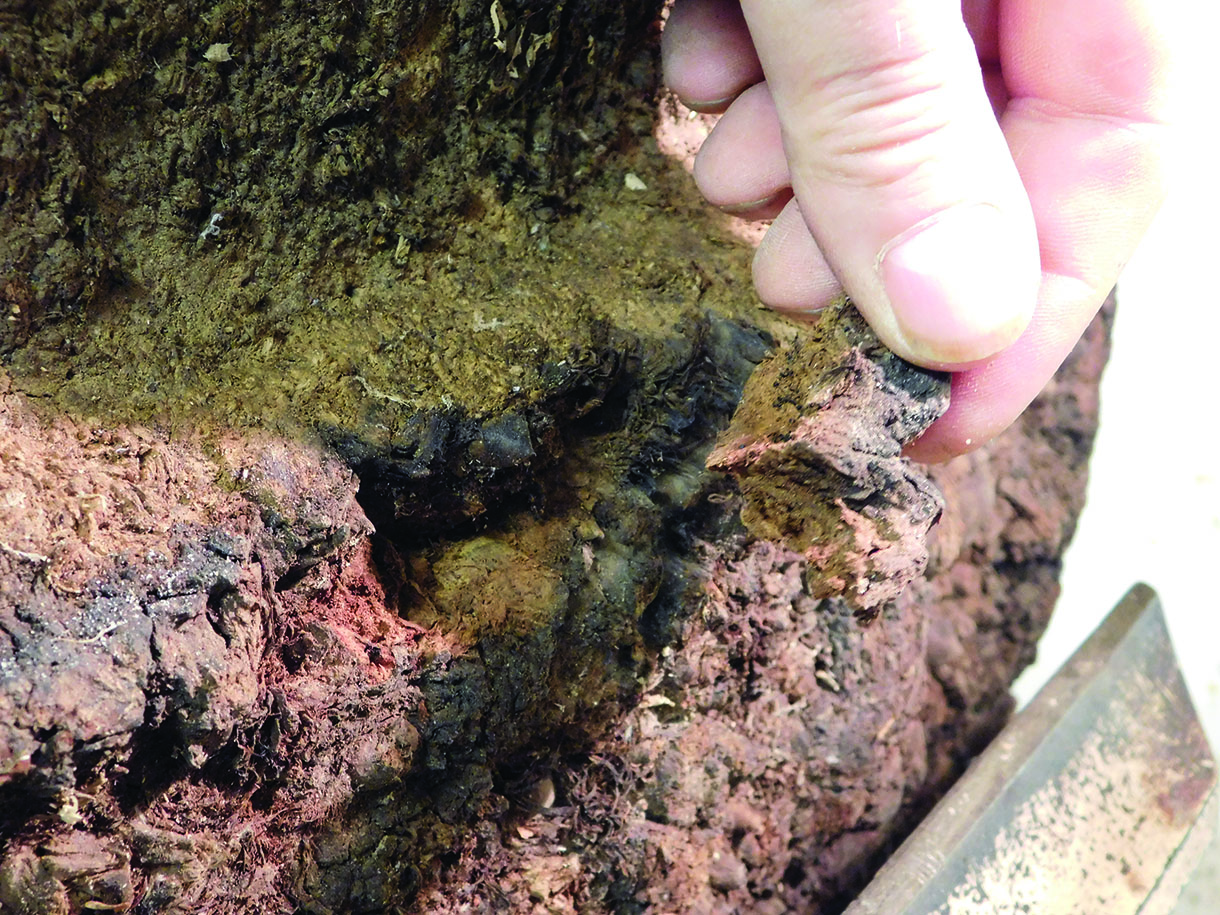 Loose bark to be removed 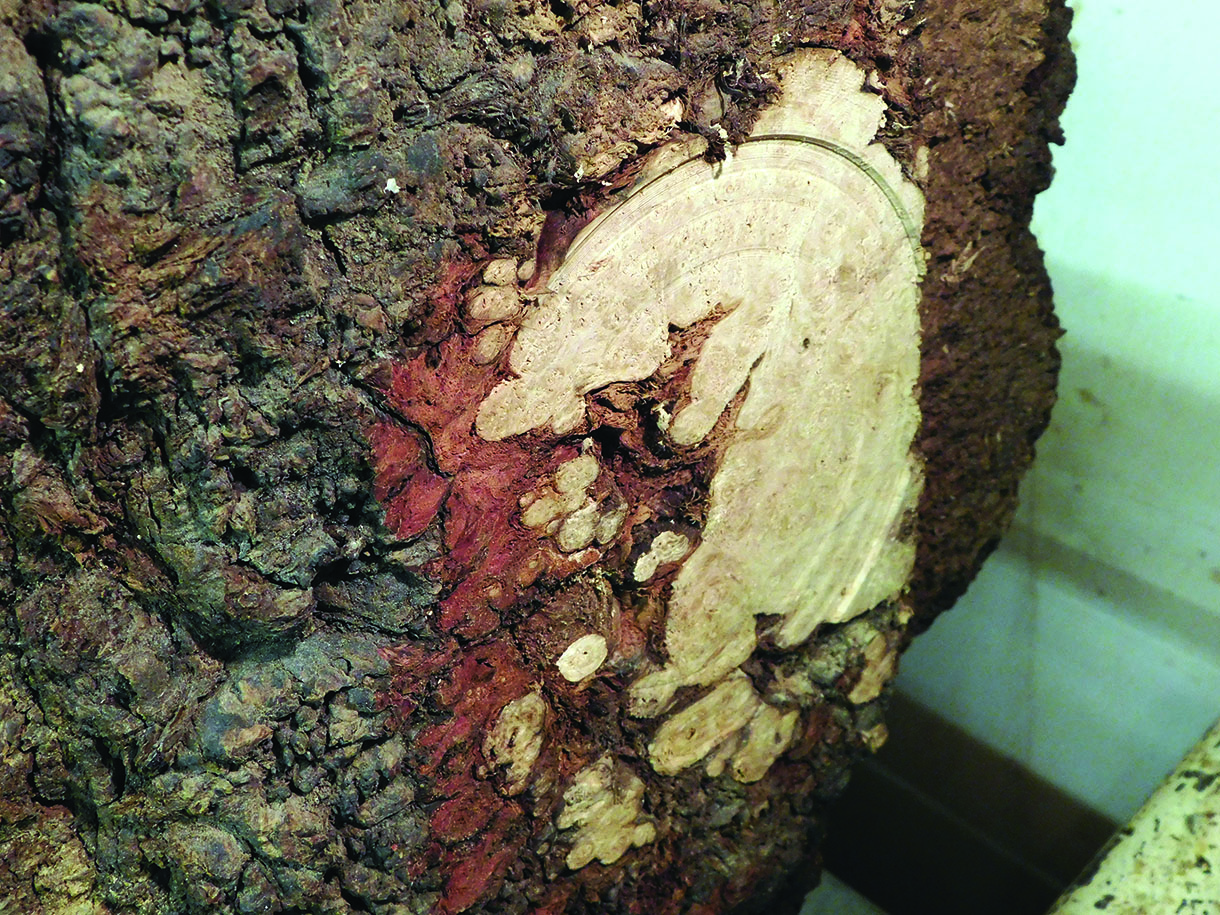 Preparing an area for a recess holding point 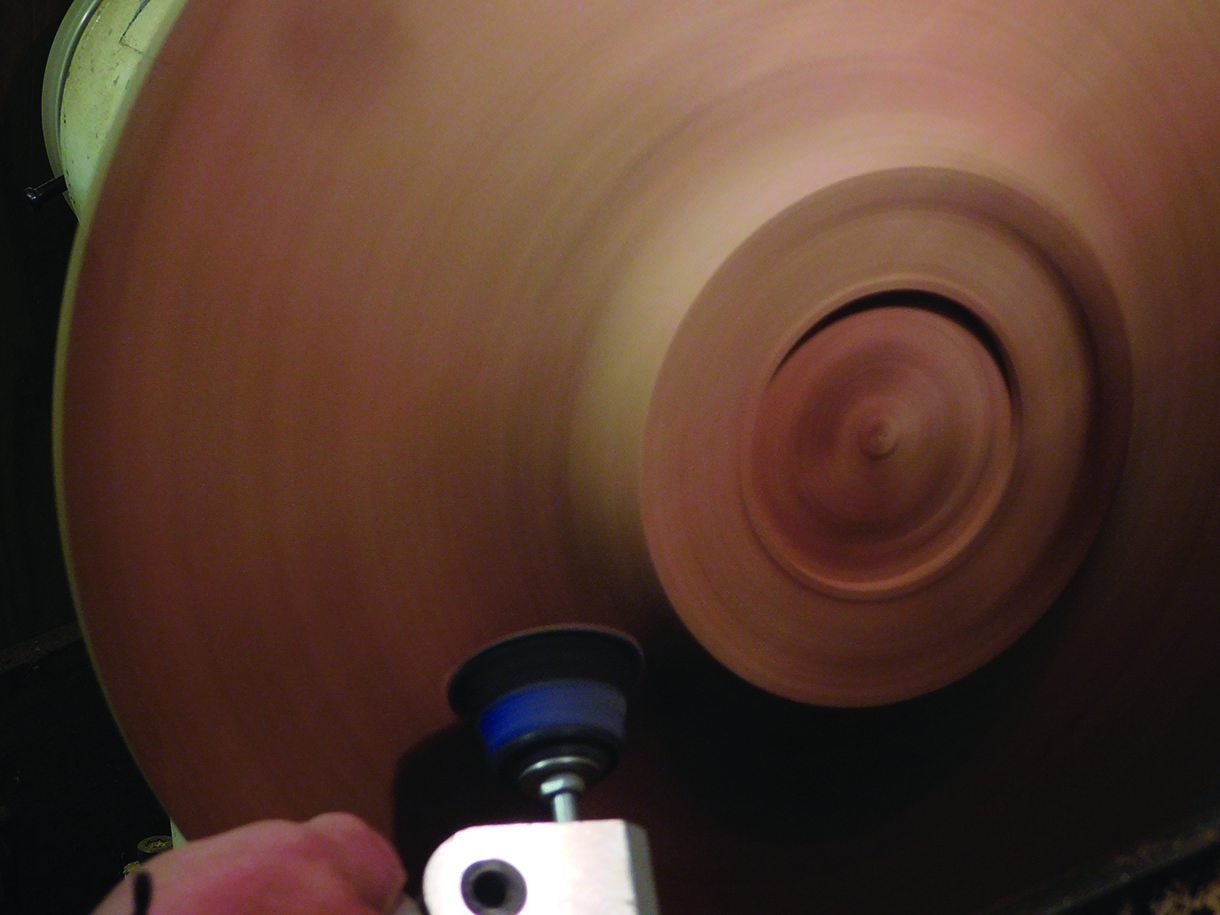 Abrading with an arbor 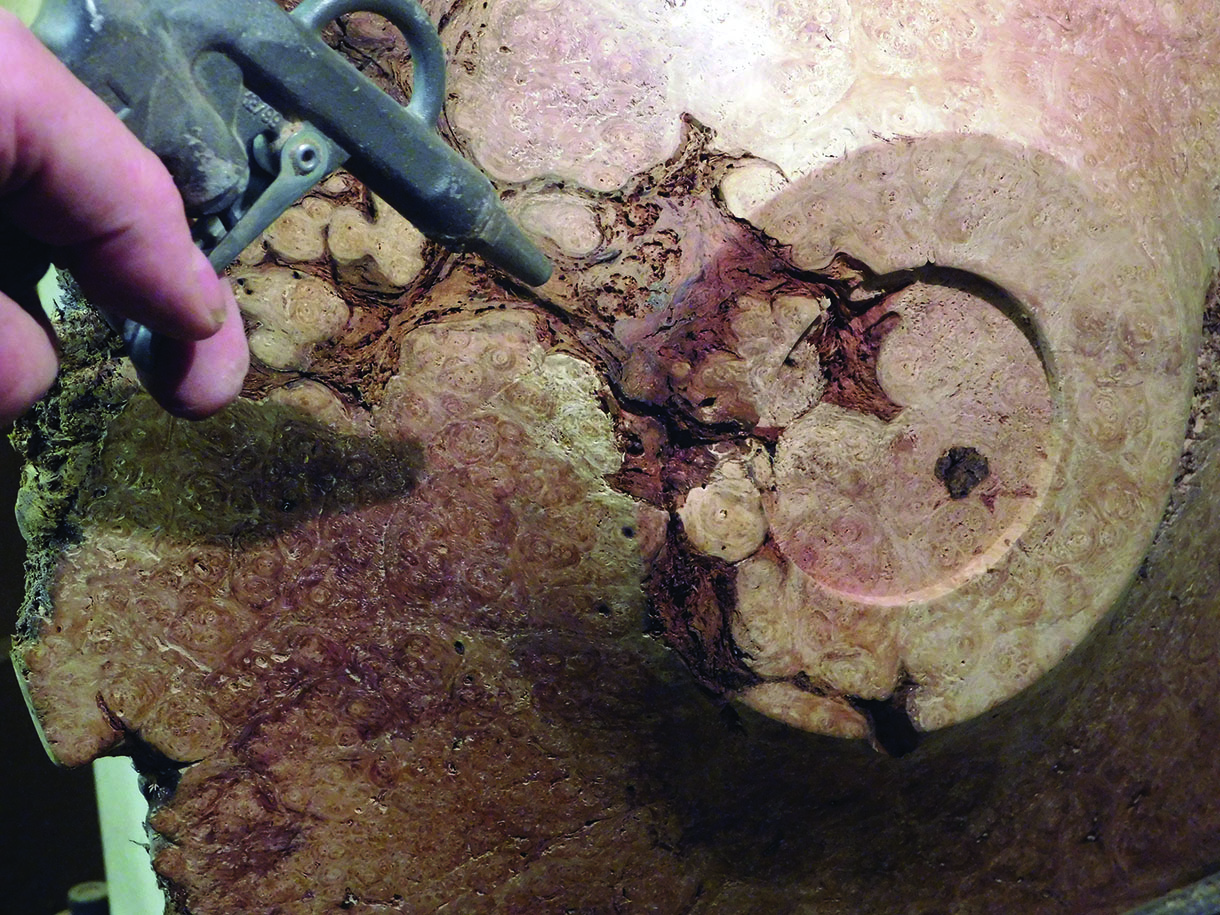 Blow out the dust from abrading

Remounting the bowl
Ensure your hold is good when remounting the bowl. If you have any irregular edges on the recess, try to position it so that you have maximum and safe hold. If you have the least doubt, stop and reconsider your mounting option.
During turning the outside of the bowl, I found I was able to remove the ‘step’ in its entirety. As a result, I was able to make the bowl section larger than anticipated. The edge of the bowl however, presented a common problem exhibited in burr; the bark inclusions were deeper than anticipated and it was obvious that for safety and aesthetic considerations that I needed to remove the bark. With the lathe switched off it can be picked out with an awl or craft knife, cleaning the edges as you go. 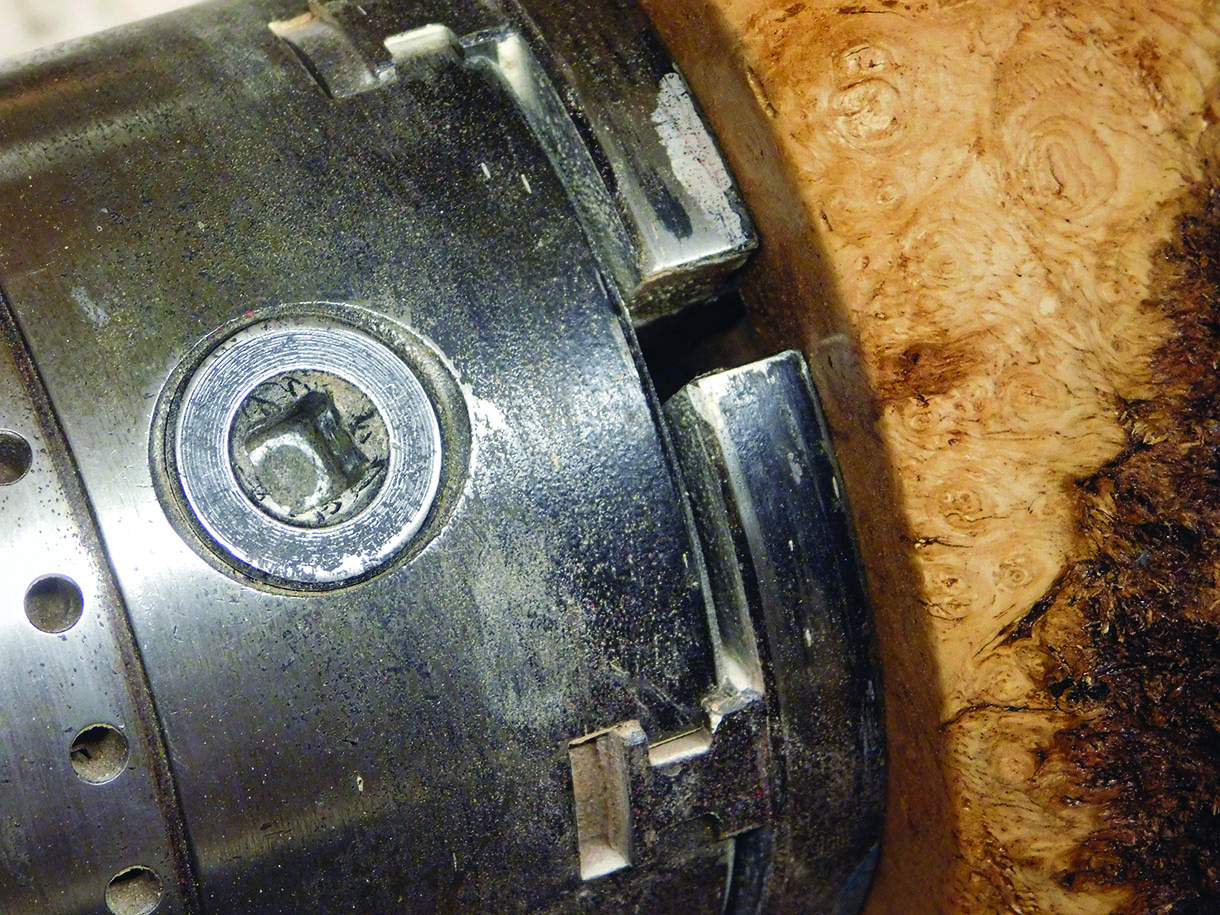 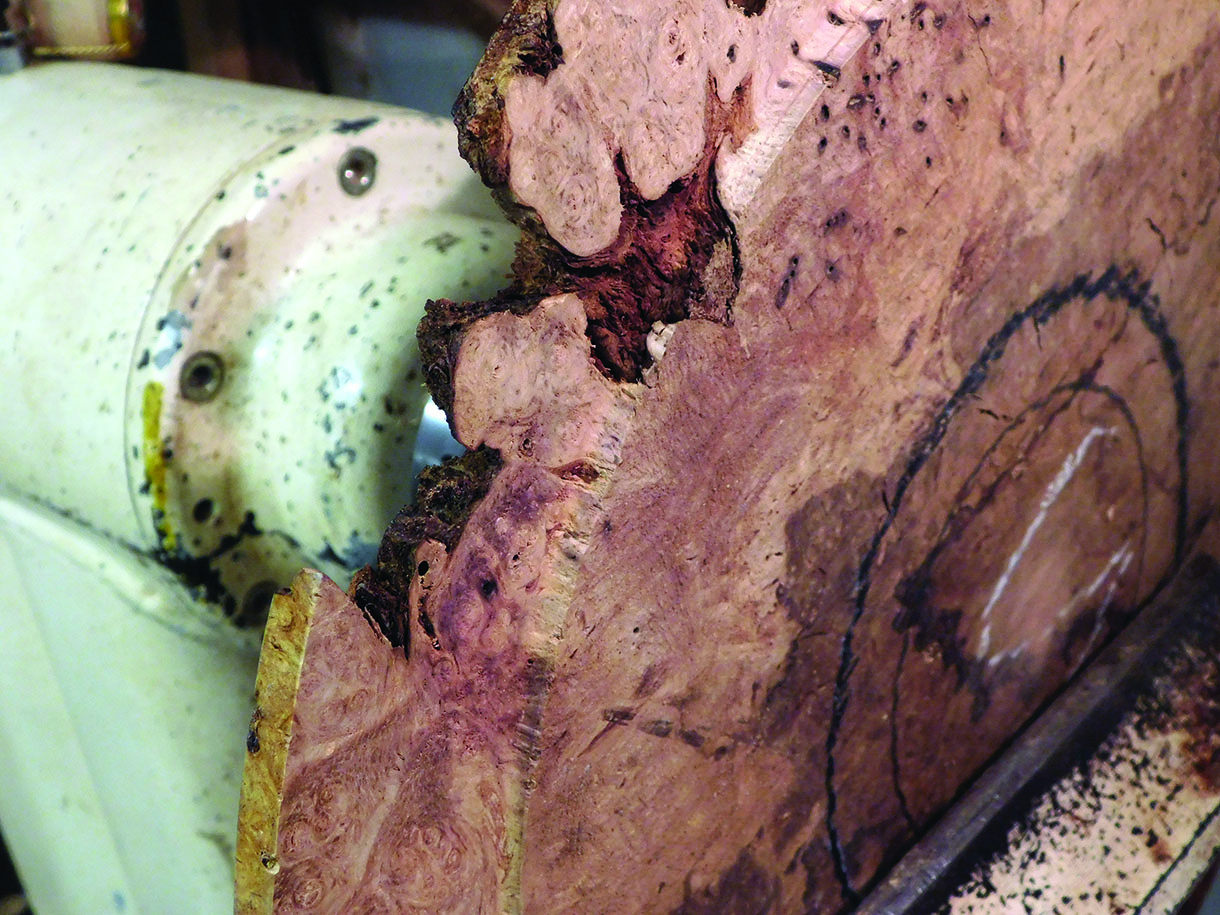 Turning the inside and personalisation
I had wanted to make the bowl in Phil’s style, but couldn’t resist a little colour and detail to give it a hint of my own. A pair of beads and some black stain were enough to achieve this. Turning the beads, one at the intersection of the rim and bowl, and one on the periphery of the rim, can be tricky with irregular edges and surfaces: your tools need to be sharp, the cuts light, and your attention constant. As with any wood with voids, too much pressure in the cut and the tool may pass in to the void causing a catch.
The bowl section of a burr bowl is often the easiest area to turn. As in the case here, the bowl is to be cut from the thickest section of wood roughly in the centre of the blank, away from the bark inclusions, towards the edges, but there remains an area of potential problems: the base of the bowl. As you move towards the base of the bowl the wall gets ever closer to the outer wall, where the majority of the bark inclusions were to be found. This can make the walls weak and the potential for a break-through, or worse still a blow-out, is ever present, so extreme care should be taken.
Cutting a sweeping surface is usually as good as it gets with burr, but if you do have problems, then a scraper might be the answer. The lack of any distinct grain direction means the wood cuts like a dense exotic, or for that matter like a block of acrylic, and the wire edge on a scraper works beautifully here.
I sealed the bowl with cellulose sealer, applied with a brush, and oil applied in the same manner. 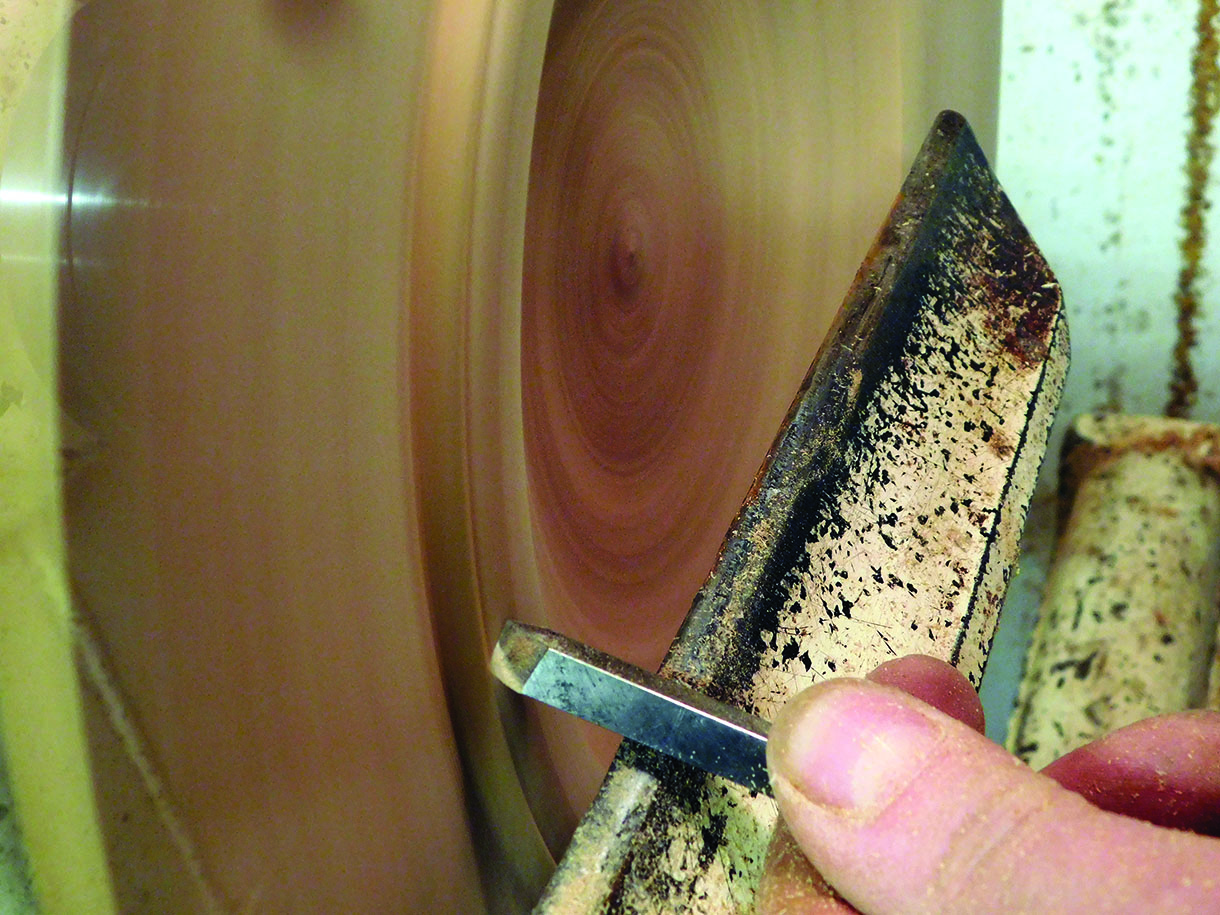 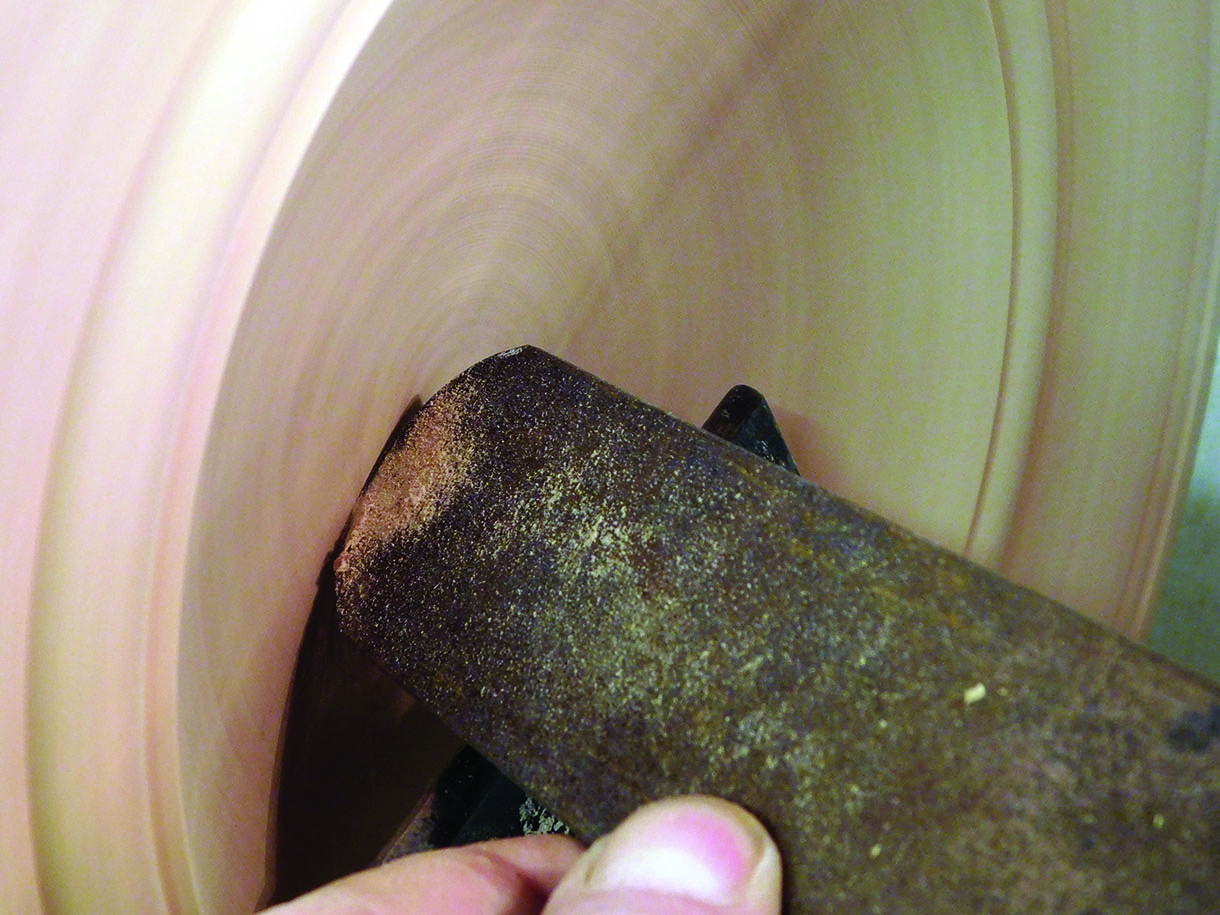 Conclusion
Burr wood is beautiful, and as anybody who produces work for sale will tell you, it sells itself. However, as detailed here, burrs can be problematic. Awareness of potential problems, steps to overcome problems  and attention to the relevant safety aspects should help to ensure a safe and positive outcome.

The finished bowl for Jill Barber; I hope Phil would have liked it