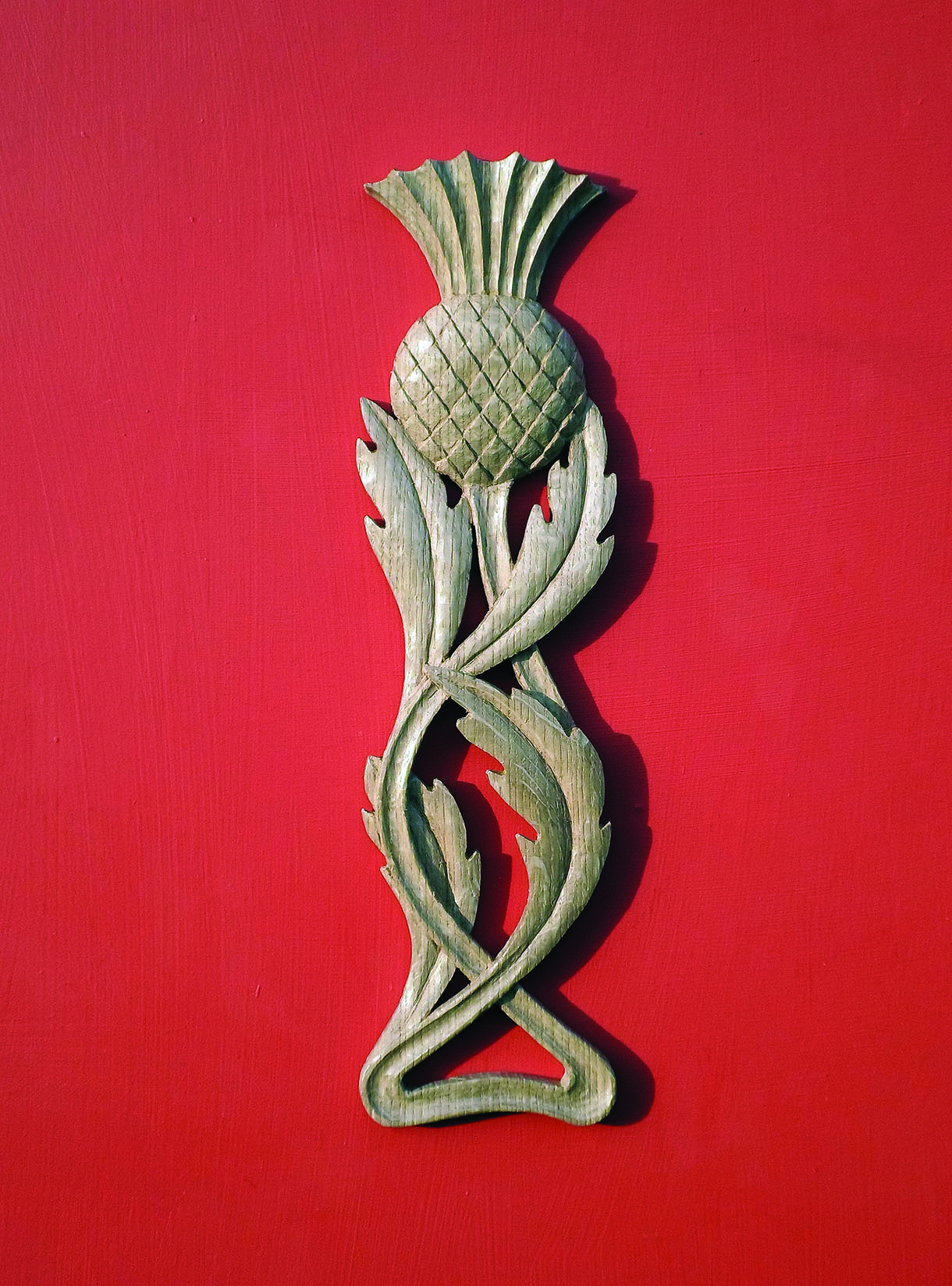 The thistle is one of the most easily recognisable wild plants of the British countryside with its spiny leaves and bulbous flowerhead, so it is not surprising that it’s widely used as a decorative motif. It has a particular relevance to Scotland where it has been the national heraldic symbol since the 13th century. According to legend, an invading Viking army was creeping up on a Scottish army’s encampment one night when one of the barefooted Vikings trod on a prickly thistle, causing him to cry out and alert the Scots to the ambush.
The craftspeople of the late-19th-century Arts & Crafts Movement took their inspiration from the flora of the countryside and much of their work was based on native plants, either in natural or stylised form. The Arts & Crafts style was contemporary with the Art Nouveau style and shared many of its design features, although in a simpler form which emphasised the qualities of the traditional materials used and showed more clearly the hand of the maker.
I have drawn up this design in the spirit of the style and the period, with the simple low-profile decoration typical of Arts & Crafts, and the double elbow-bends at the ‘root end’ of the stem so often found in Art Nouveau. I have, perhaps less-typically, designed this as a ‘pierced’ carving rather than a solid panel as it looks much lighter and prettier as a wall decoration. Arts & Crafts woodcarvers worked mainly in oak (Quercus robur) so I have kept to that tradition in this project.

Pierced carvings
A pierced carving is one where the background is completely cut away right through the board. Pierced carvings look lighter and livelier than a solid board, the pattern outlines are fixed at the start, and you don’t need to ‘ground out’ the background. Undercutting is easier as you can get at all the elements from behind. Piercing is done by drilling access holes for a jigsaw or scrollsaw blade in order to cut out the voids. You need to be careful of cutting out the wrong bits, so mark your cutting lines in red and your drilling points with a cross. Use a very narrow jigsaw blade, preferably 5mm. This will get you round the tight curves and you will only need a 5mm drill hole.

The Arts & Crafts Movement
The Arts & Crafts Movement, influential from around 1880 to the First World War, was not just a new decorative style. At its heart was an evangelical group of artists, architects and craftspeople who believed that the ‘modern’ Victorian world of industrialisation and mass production threatened traditional skills and robbed manual labour of its dignity. The ‘craftsperson’ was being replaced by factory workers, who used machines to repeatedly perform just one small task in a production line that separated them from the finished product. Socially-minded thinkers like William Morris led the Arts & Crafts Movement in a crusade to produce beautiful objects using traditional methods and traditional materials where the hand of the individual artisan could be seen in the finished object. Central to their principles was the use of simple forms with no extravagant decoration, made from traditional and natural materials, with the method of its construction clearly visible. The flora and fauna of the British countryside was the inspiration for their designs, and oak was the favoured timber for most woodwork. 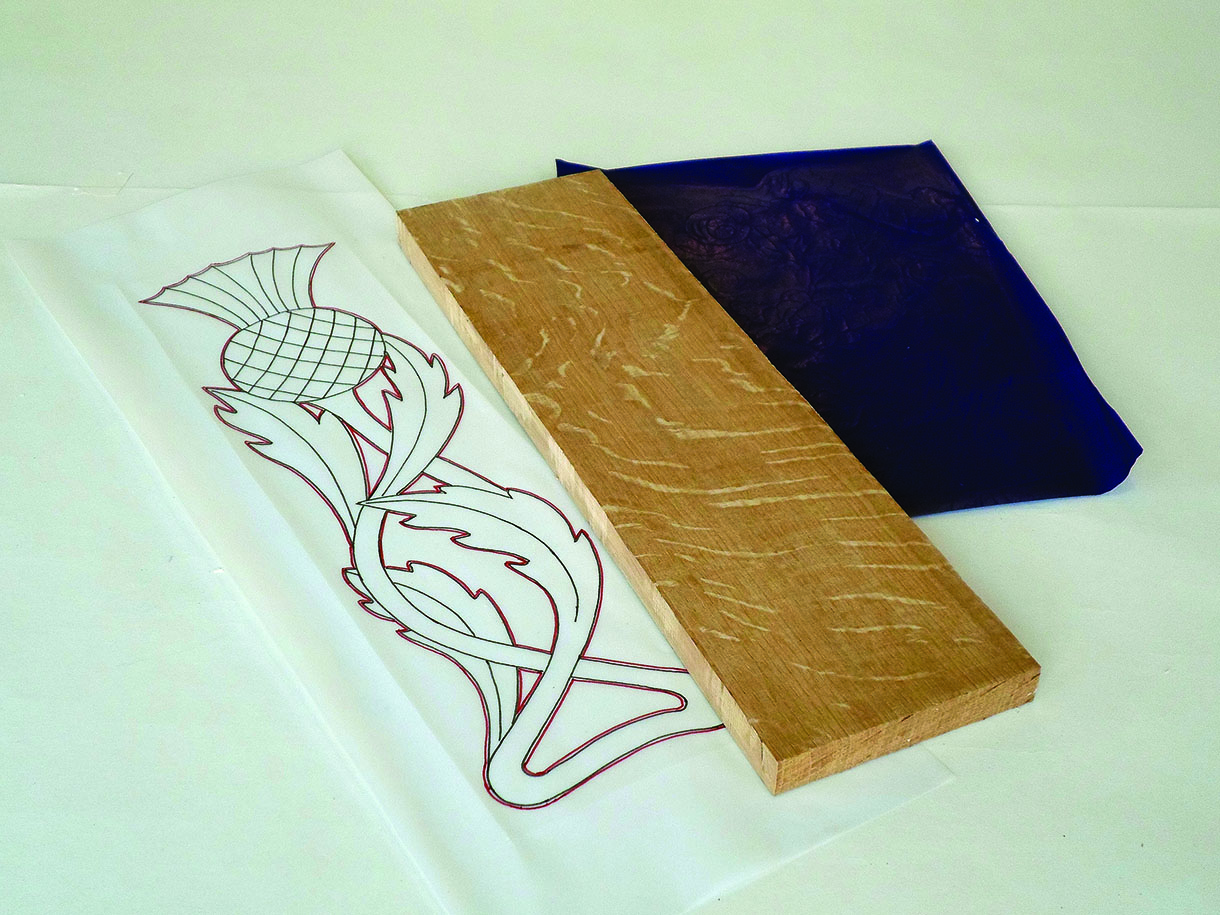 1. Get a piece of oak 380 x 100 x 18mm, or whatever size suits you best. ‘Green’ oak, air-dried for one to three years, is easier to carve than kiln-dried oak and gives a better finish. Select a piece that is fairly straight-grained and free of knots. Make a full-size copy of the pattern and get some carbon paper 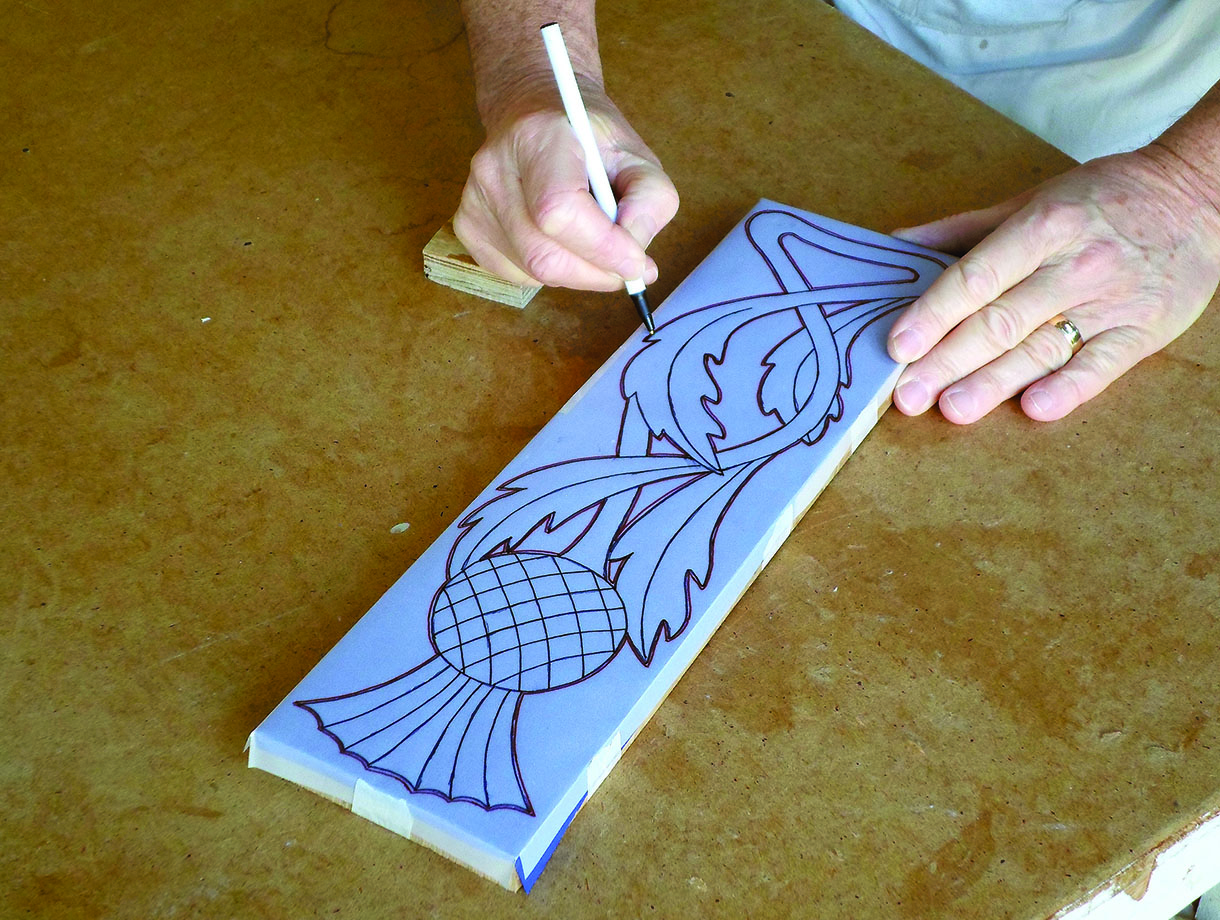 2. Lay the carbon paper on the wood and fix the drawing firmly in place with tape. Press firmly as you trace the lines 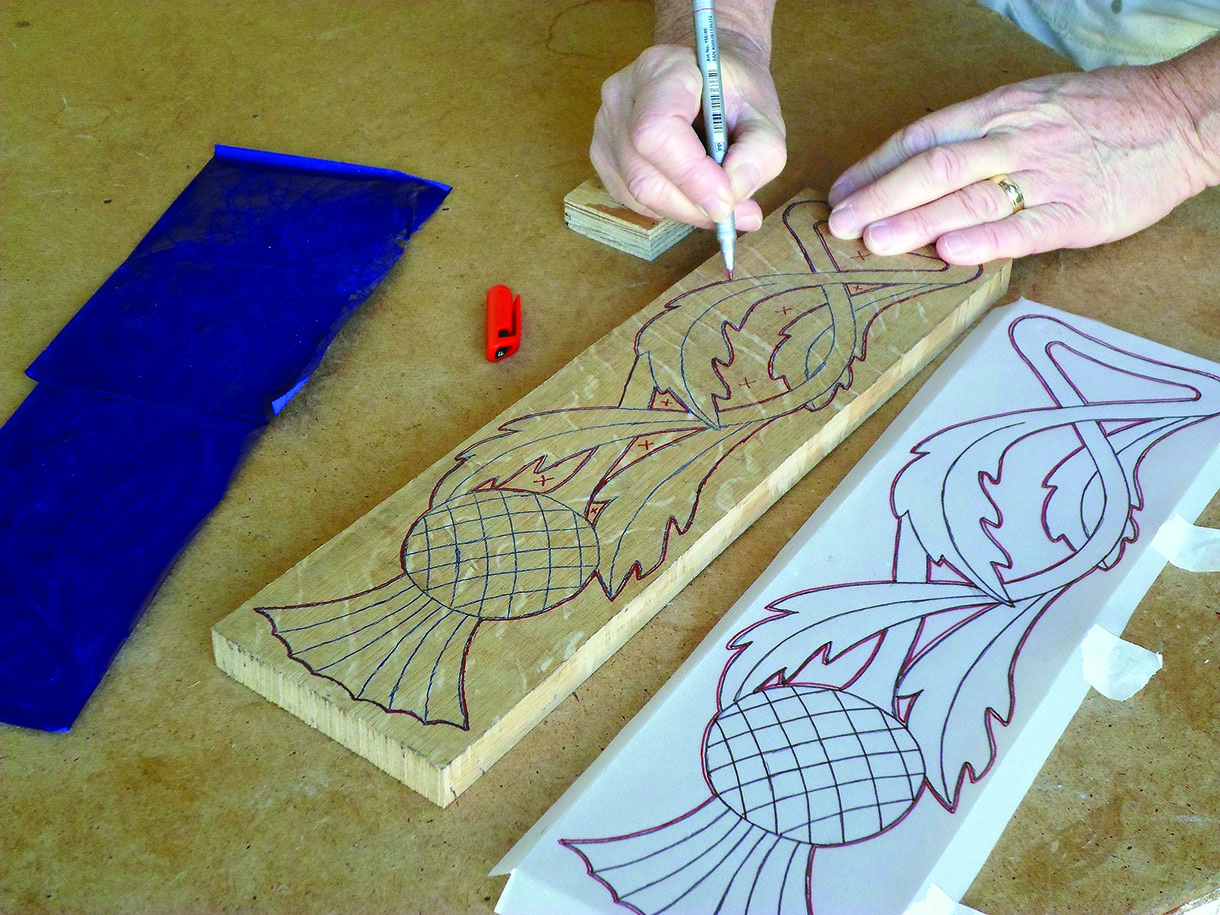 3. Mark your cutting lines in red so you don’t get lost with the jigsaw. Clearly mark the internal voids 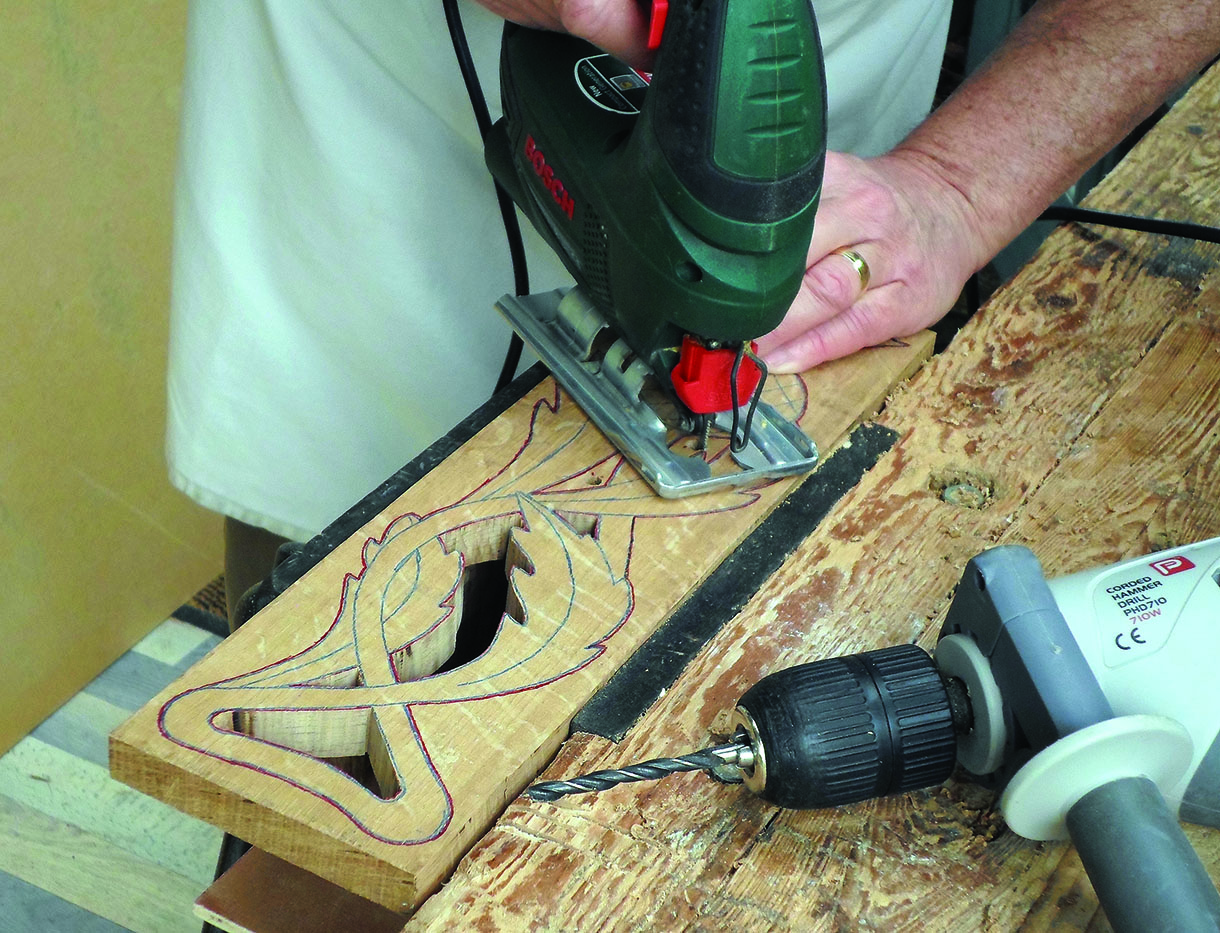 4. Use a jigsaw to cut out the internal voids. Hold the work in a vice so the underside is clear. Drill entry holes first, and be aware that the jigsaw blade may flex a little in the curves. Use a 5mm blade to get around the tight curves – it will get very hot and will scorch the wood, so keep it moving as much as possible 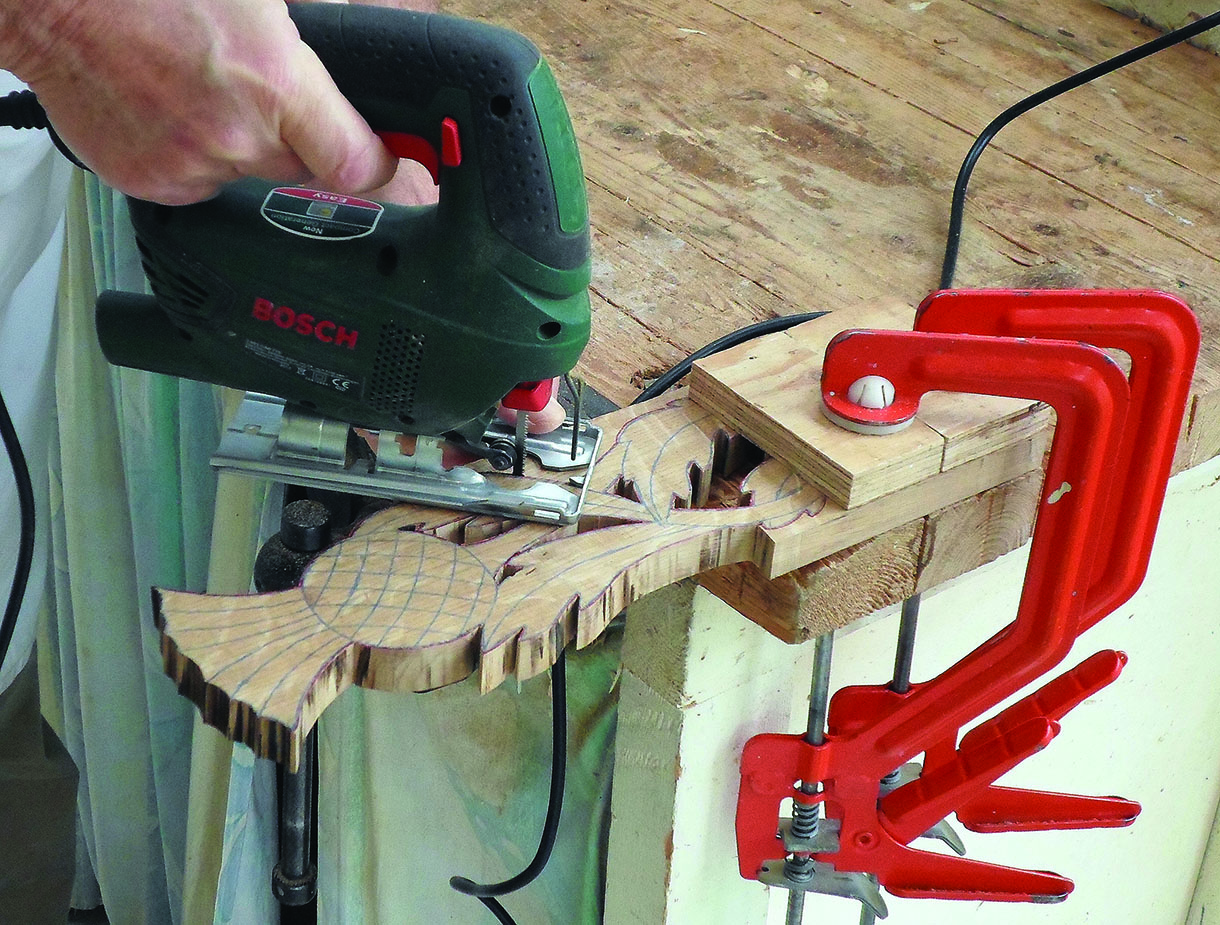 5. Continue with the jigsaw to cut the outer edges, clamping the board so it overhangs the bench. You can also use a scroll-saw or bandsaw if you have one4 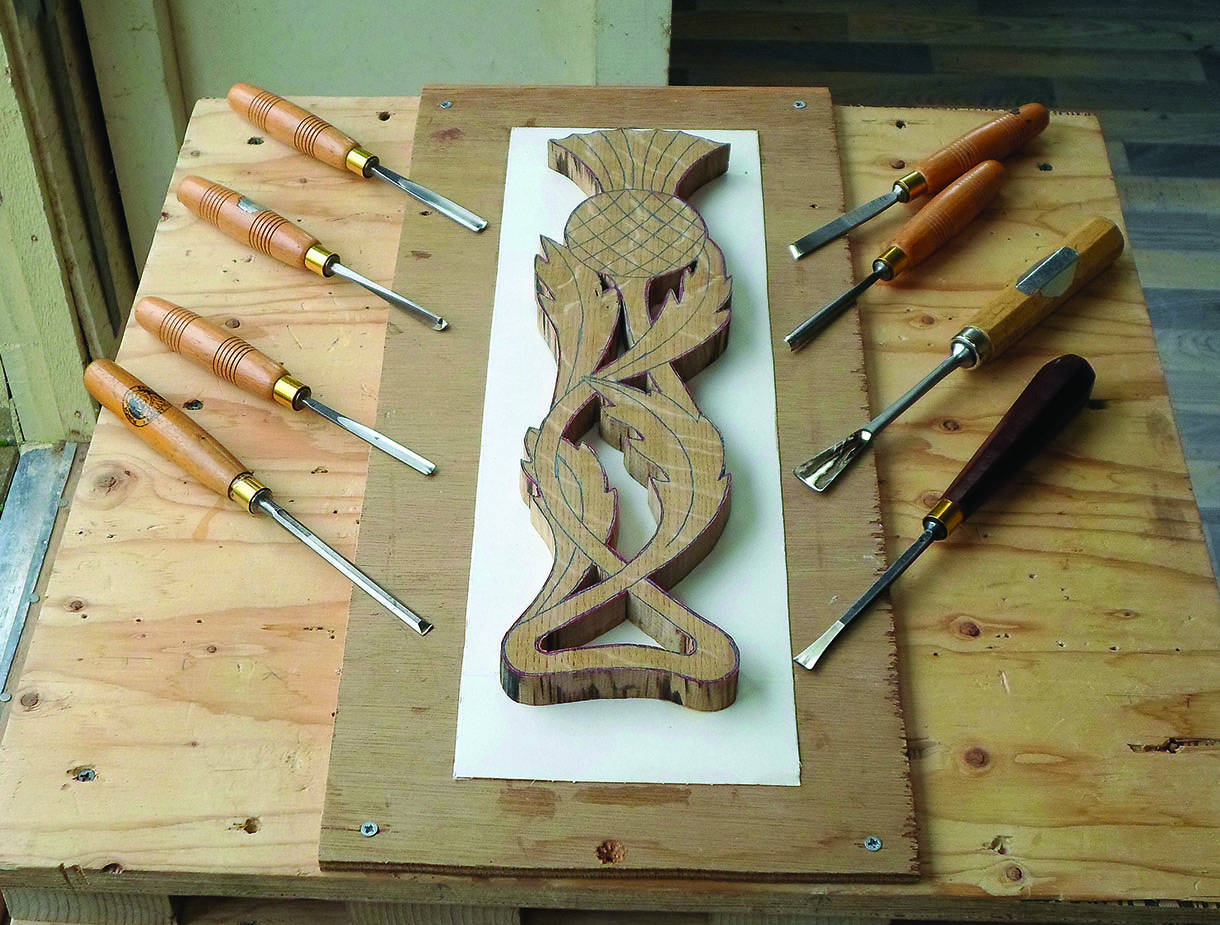 6. Work holding can be tricky on a pierced carving as there is not much to screw into or clamp onto. It is best to paste it onto a piece of card, then onto a backing board, using glue or sanding sealer. Screw or clamp the backing board to the bench and you are ready to start carving 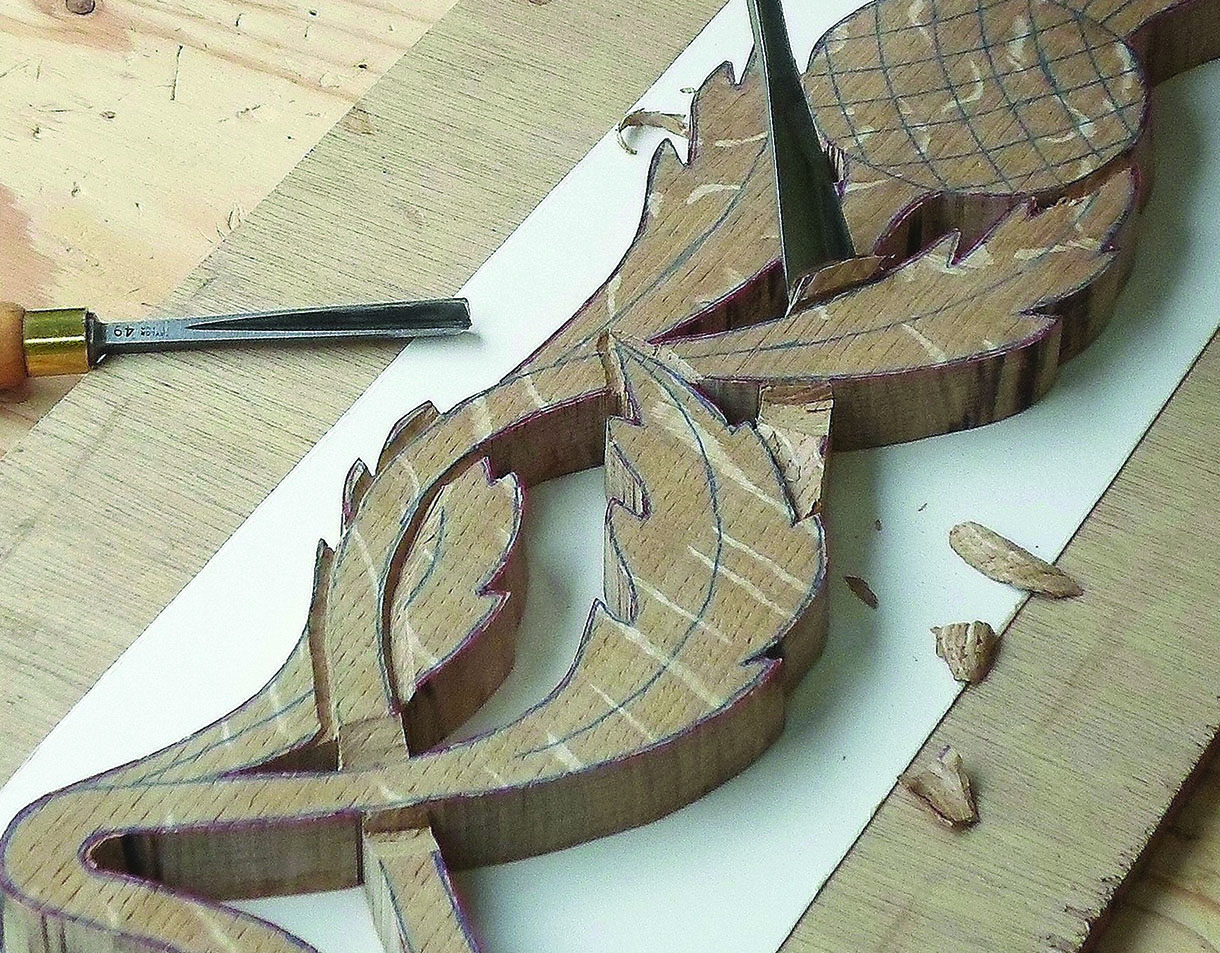 7. First, we need to see what’s what. Use a ‘V’-tool to separate the leaves from the stems and flower head, then use a shallow gouge to cut out a wedge on the lower side of each overlap in the stems so we can clearly see which goes under and which goes over 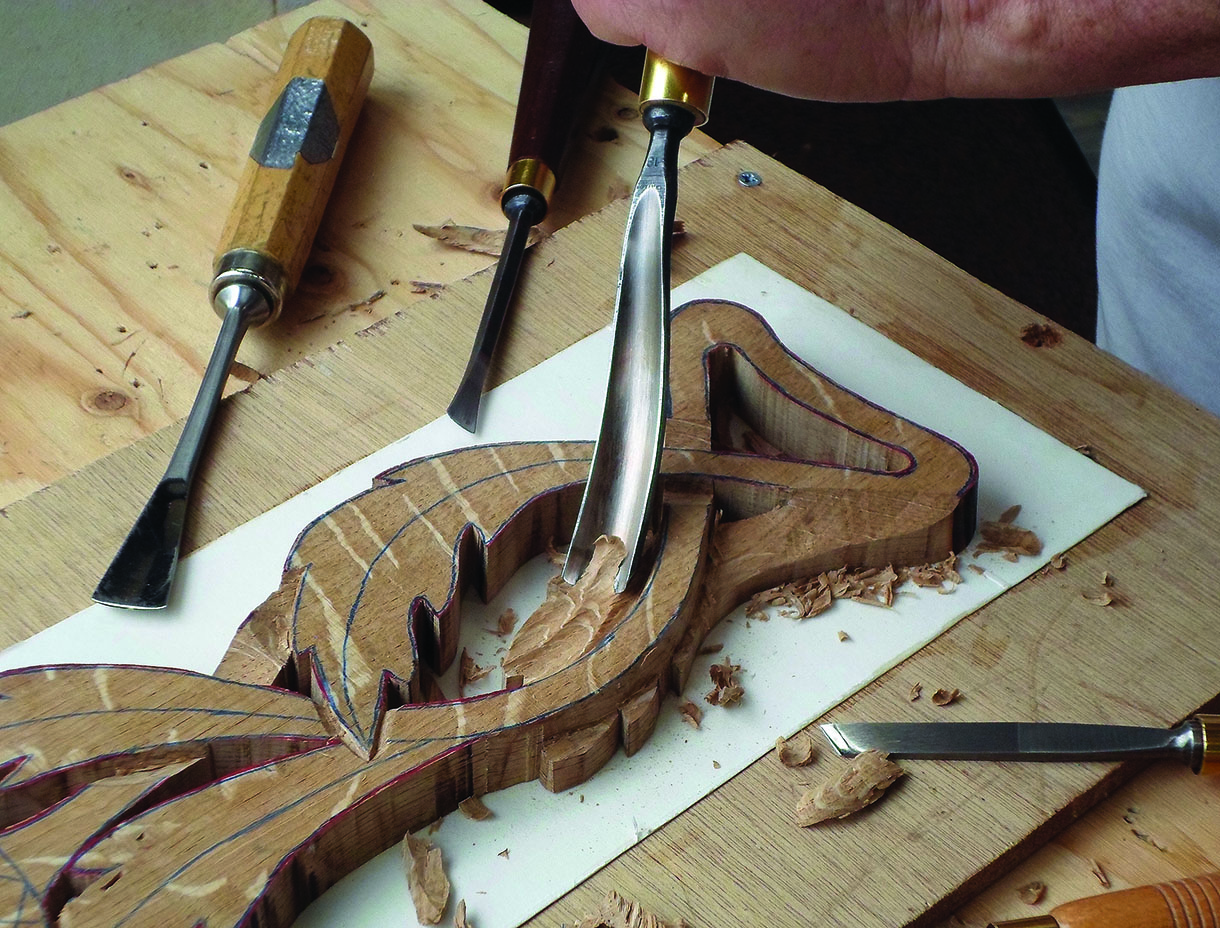 8. Cut down the surface of the leaf on the lower left side to about 10mm thick to give room to lower the stem 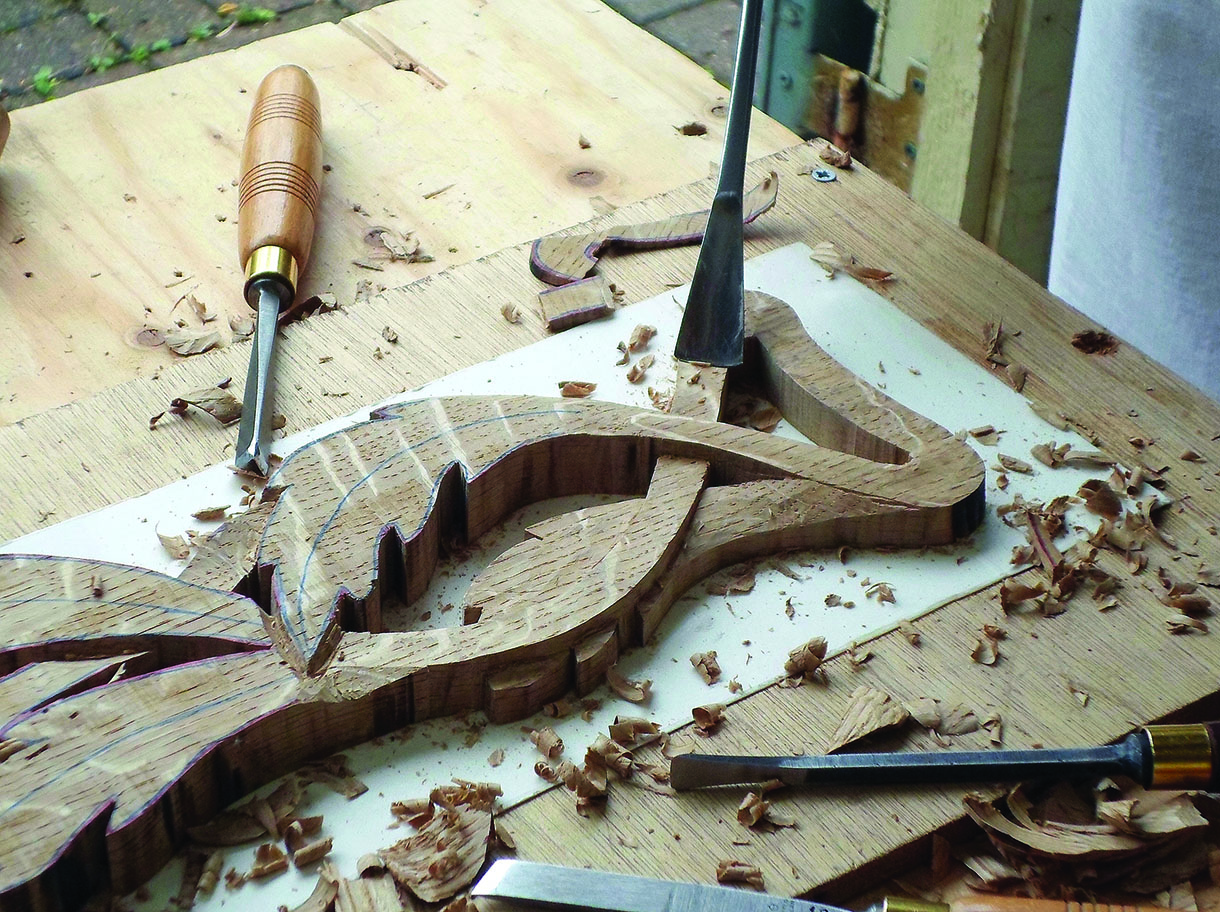 9. Reduce the level of the lower half of the stem so that it slopes from the middle leaf down to the bottom left corner, then across to the right and back up under itself to just below the middle leaf tip 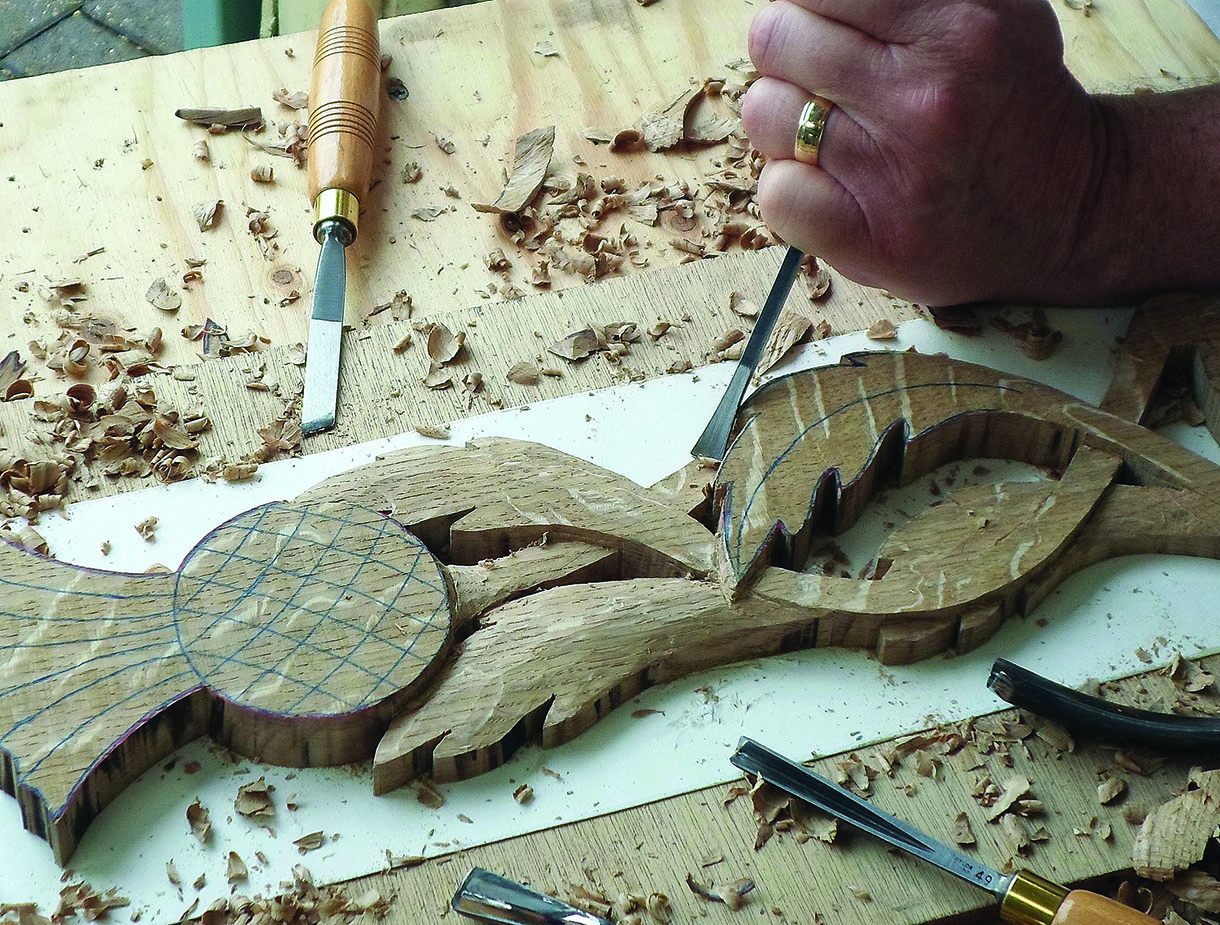 10. Continue the flow of the left-hand stem up into the two upper leaves, maintaining the line and level as it passes under the middle leaf tip. Reduce the level of the upper leaves so they are about 8mm thick where they join the flower head. Now lower the central stem to flow down from the flower head, passing under the upper right leaf, disappearing under the lower right leaf and appearing to join the lower stem under the leaf 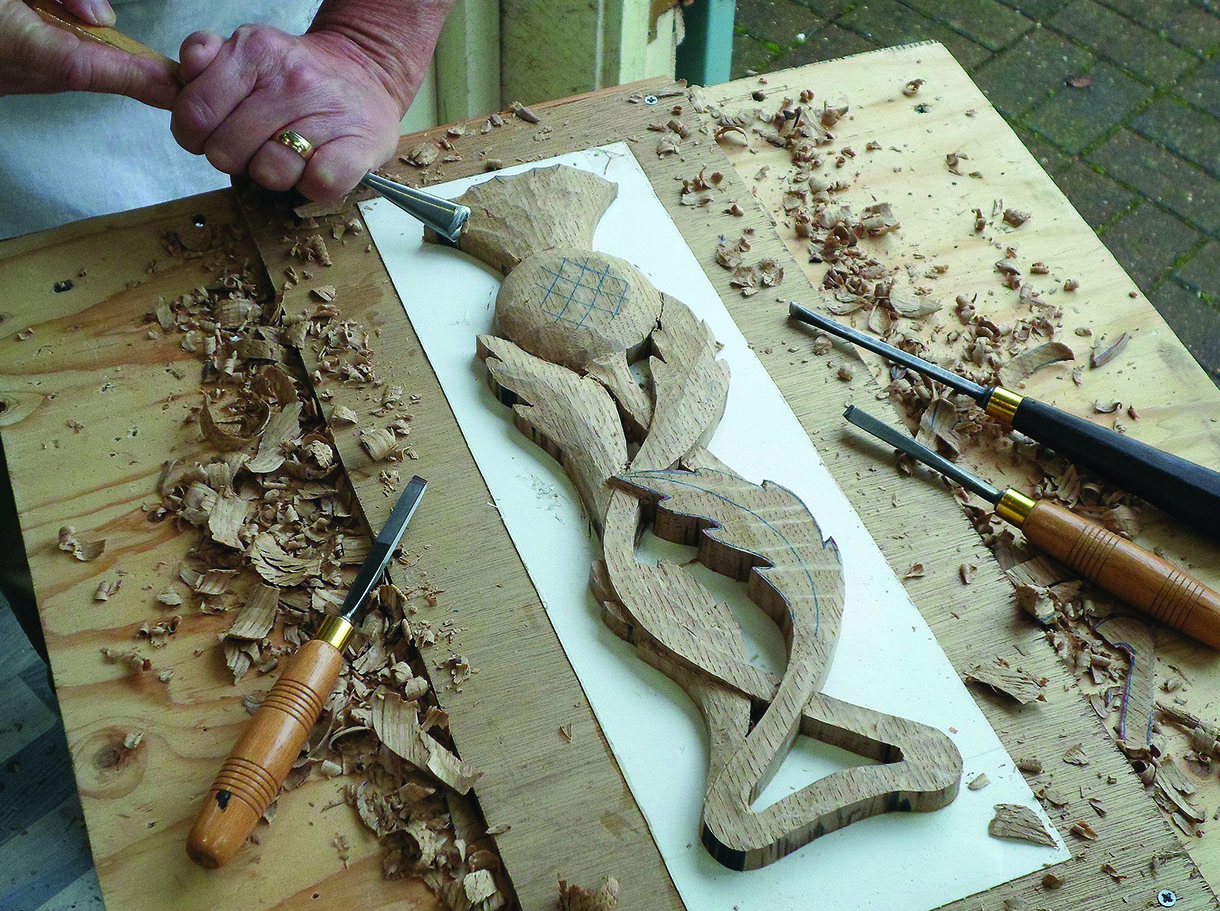 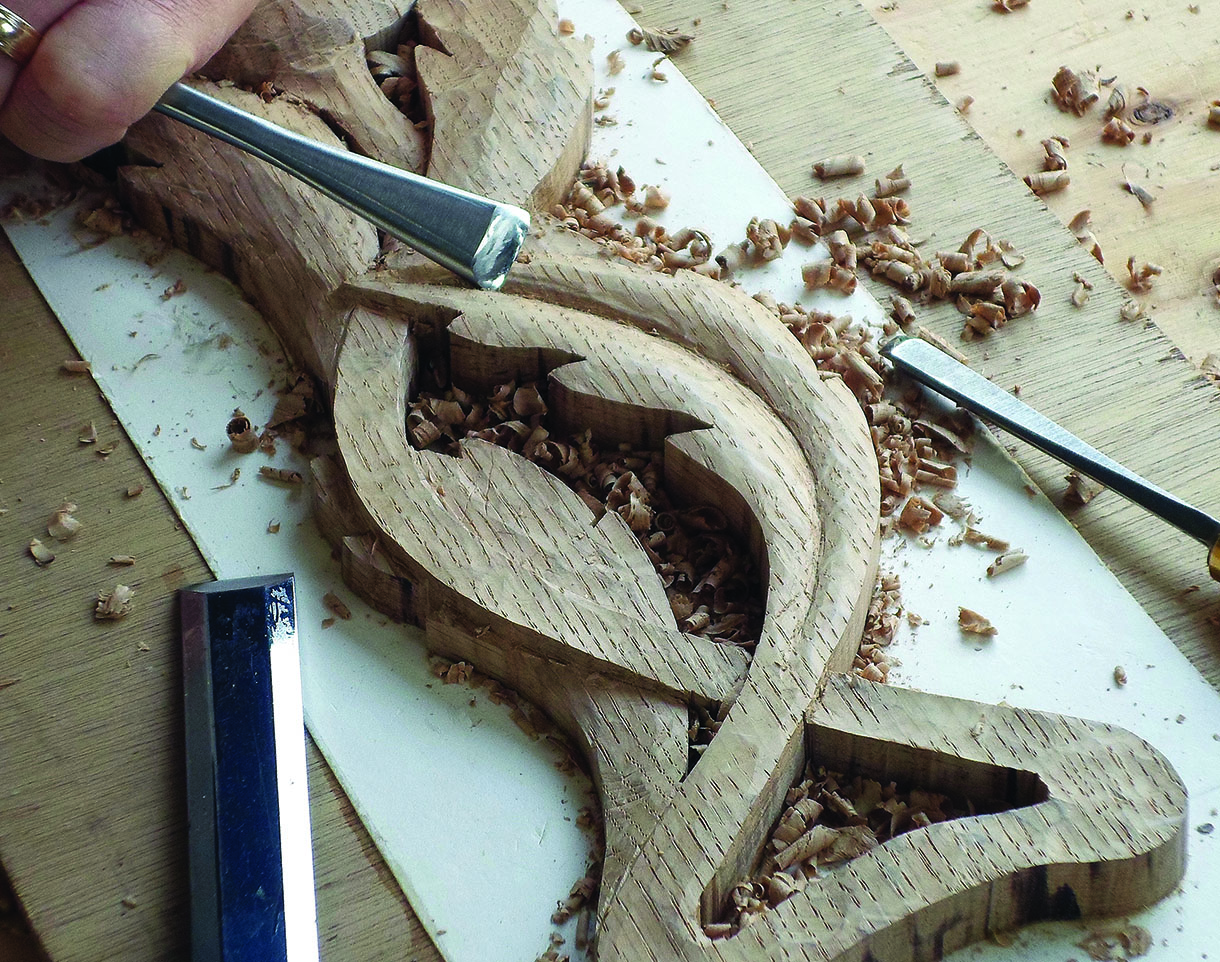 12. Return now to the middle-right leaf. Form its final shape by cutting a deep v-groove along the vein line with a ‘V’-tool, then use an inverted shallow gouge to slope the sides away from the vein. Refine the levels to create a smooth flow from the leaf tip down into the stem at the crossover 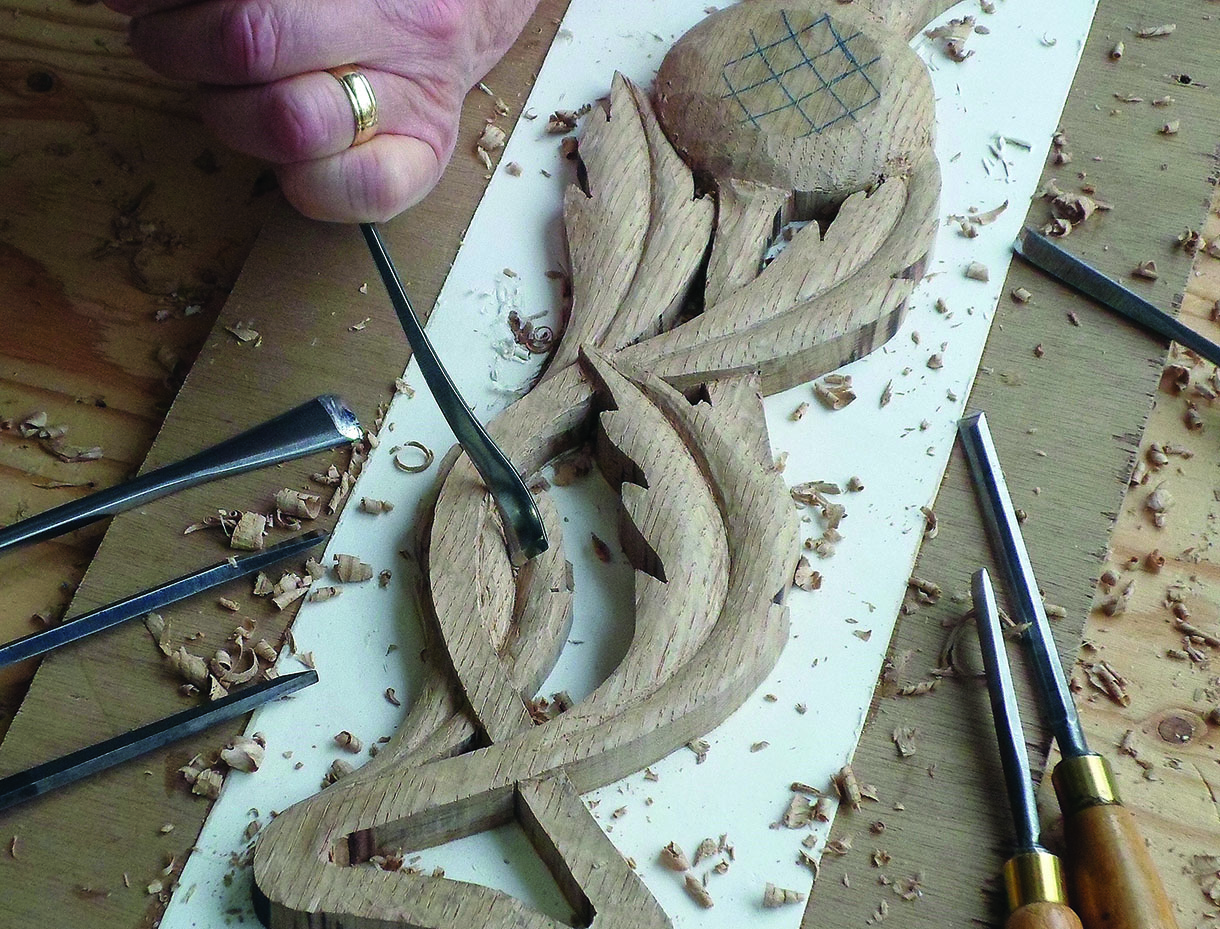 13. Repeat the process on the other three leaves. Carefully redraw the vein lines with a wax pencil to make sure you don’t lose the flow of the pattern. With the bottom-left leaf, take particular care to follow through the line and level of the vein and the curve of the leaf surfaces as it flows under the stem. A back-bent gouge is handy here 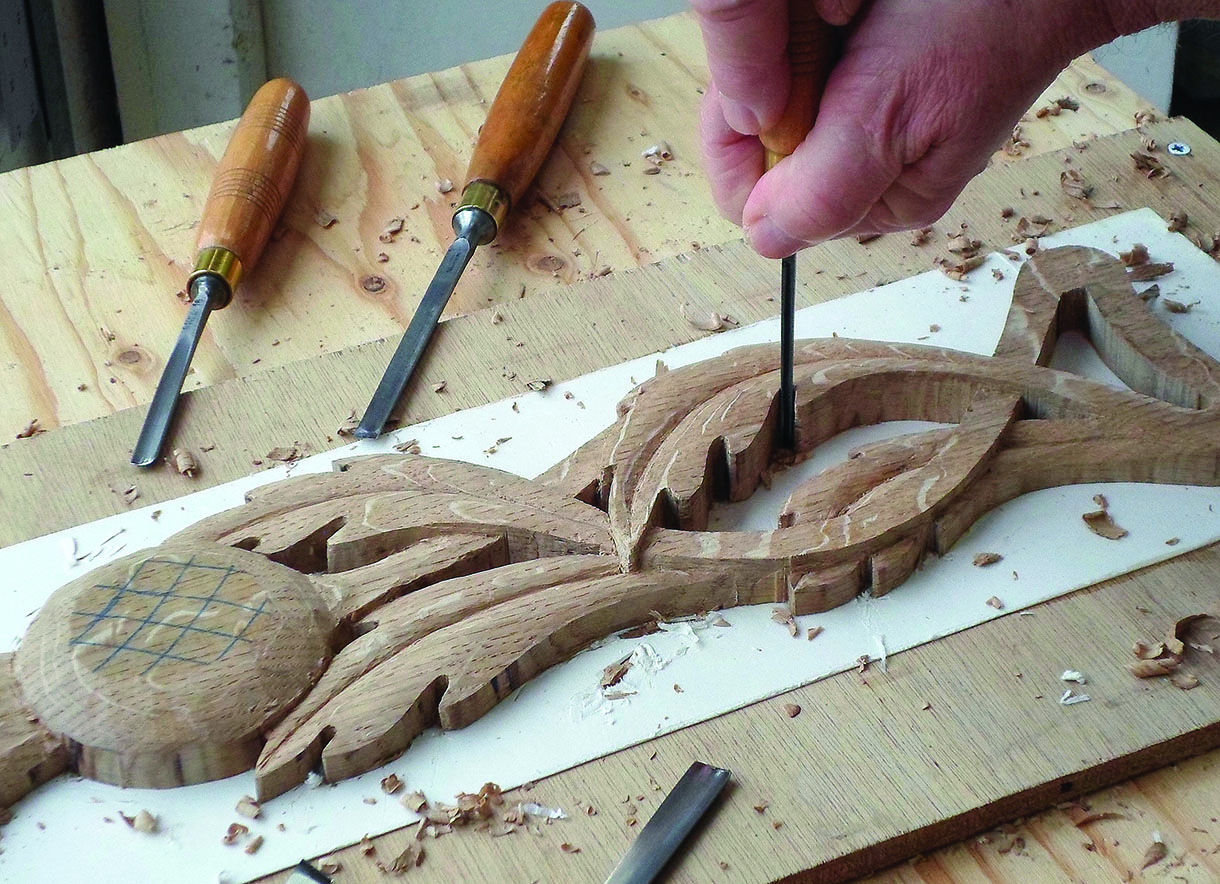 14. Refine the line of the leaf edges and remove any jigsaw scorch marks with a skew chisel. Use a sharp gouge and a 2mm veiner to finish the ‘spikes’ and ‘eyes’ in the leaf edges 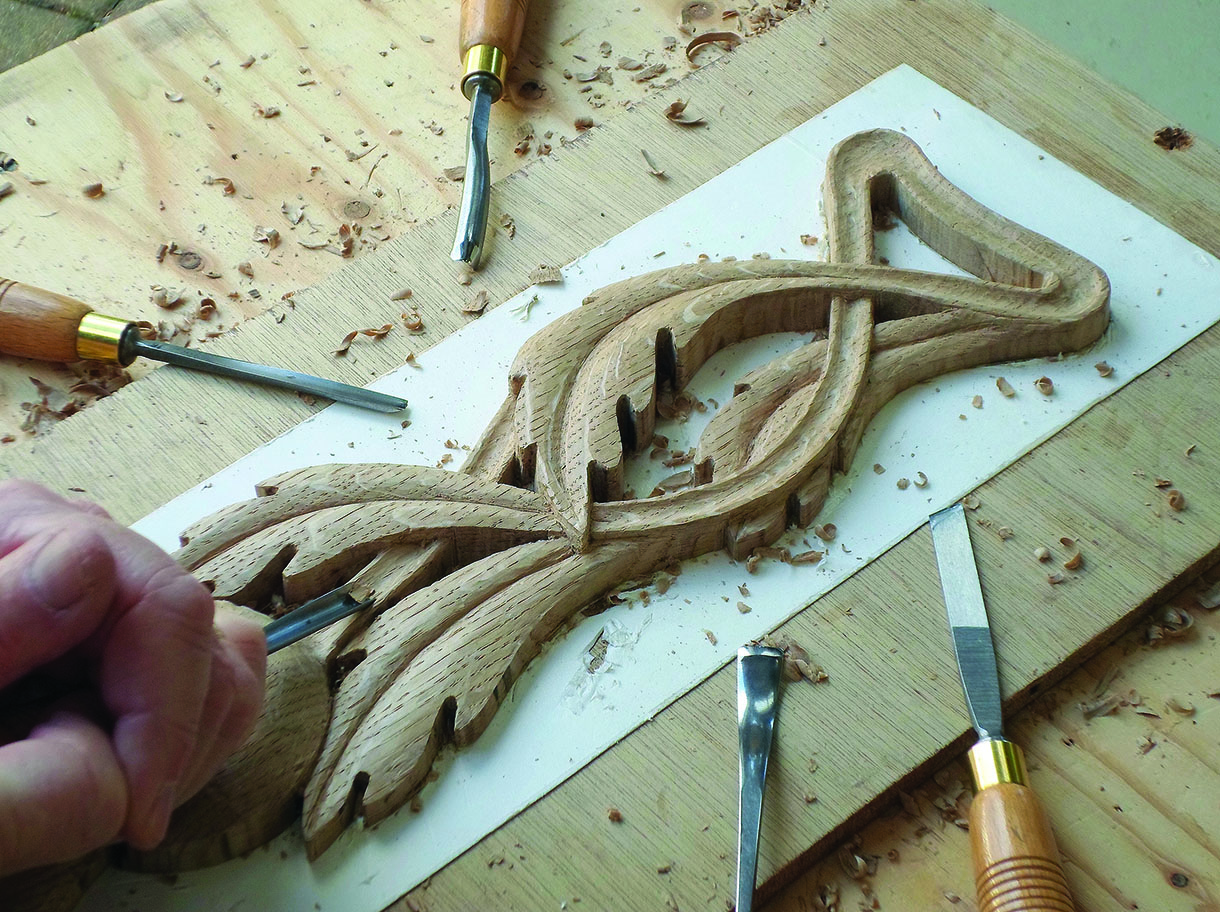 15. Now it’s time to finish the stem. Use a skew chisel to refine the edges so the stem is the right width and curves smoothly along its length. Use a No.8, 8mm gouge, then a shallower gouge, to form the hollow groove, working a shaving at a time so you don’t crumble the edges. Finally, round over the outer edges by running along them with a shallow gouge 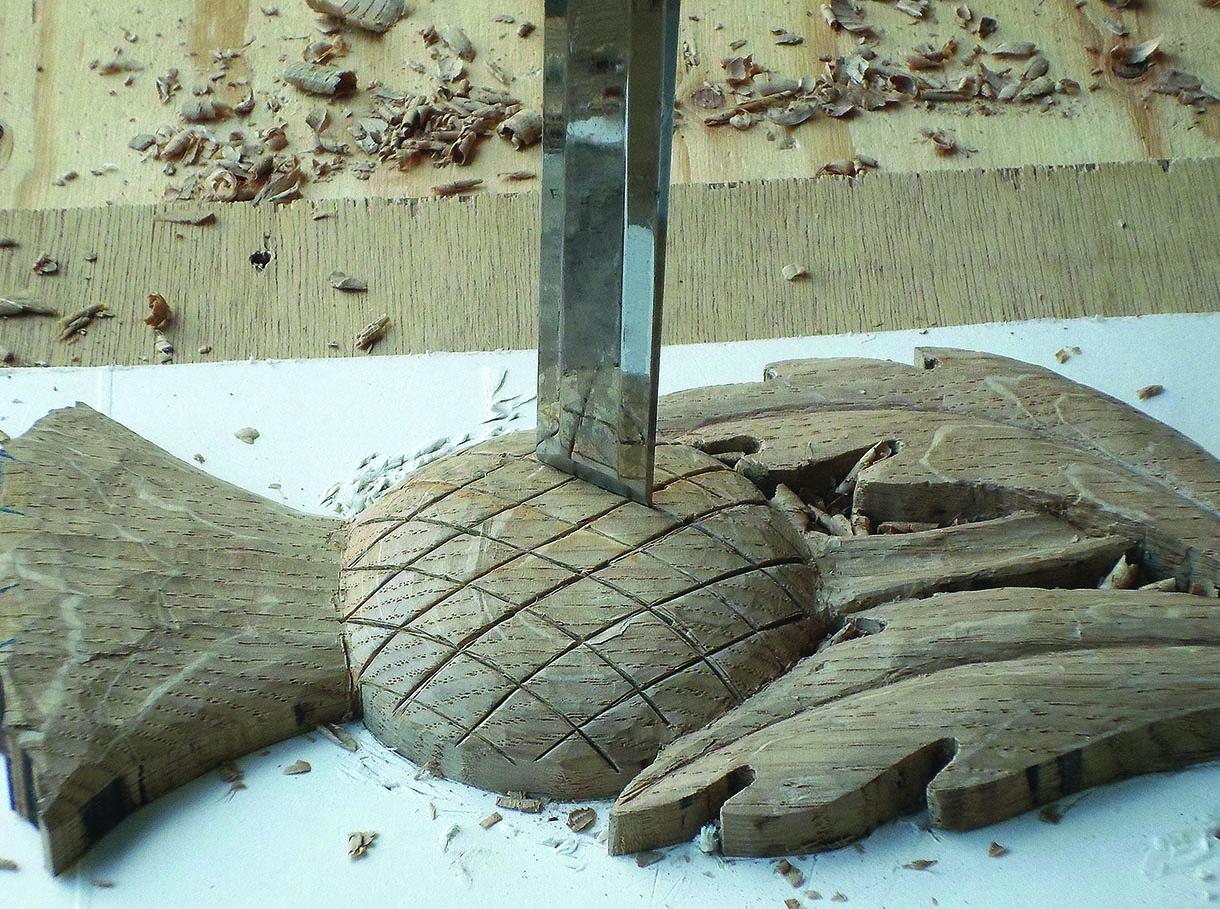 16. Moving on to the flower head, refine the shape into a flattened ball. Take a 25mm flat chisel and mark in the slightly curved diaper pattern of the ‘scales’ 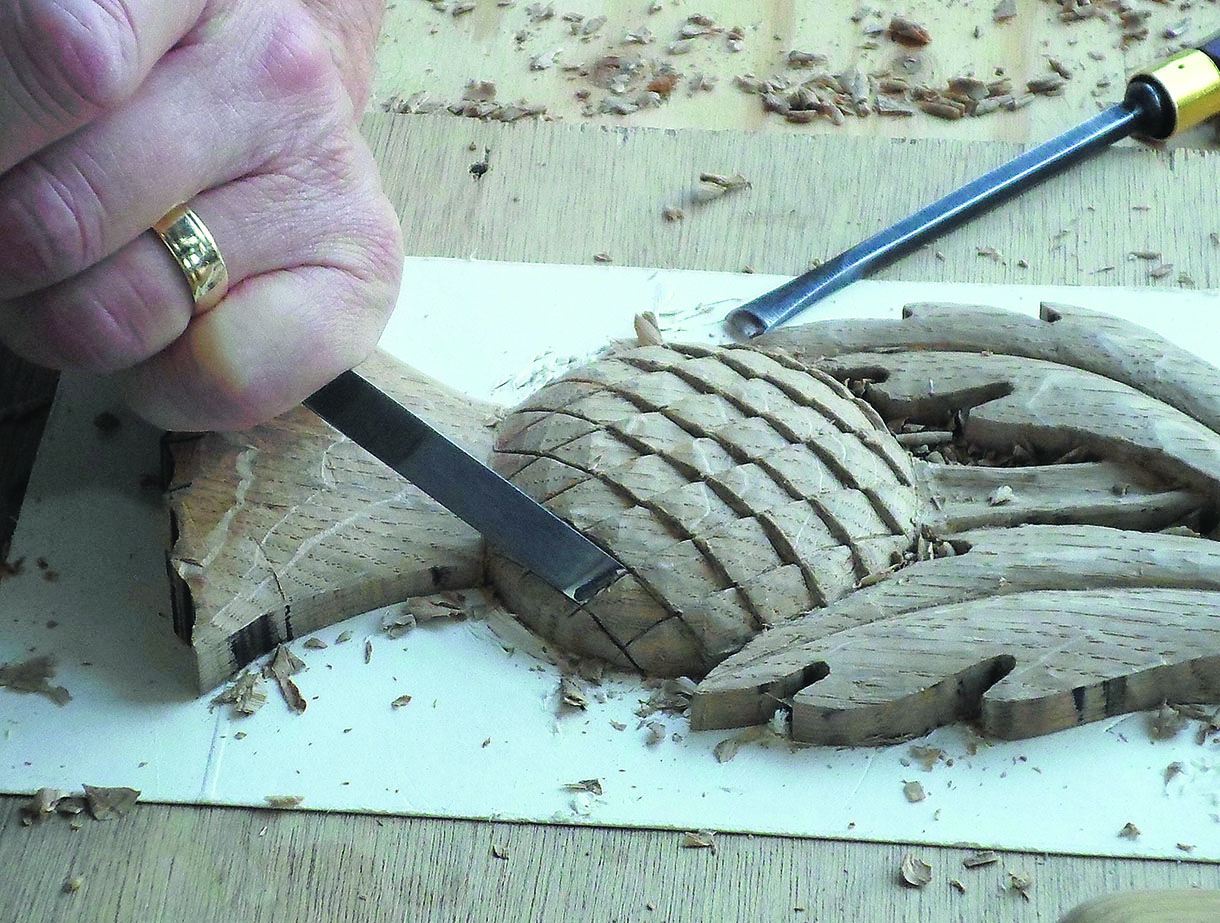 17. Use the skew chisel and a shallow fishtail gouge to carve the scales so they overlap from bottom to top 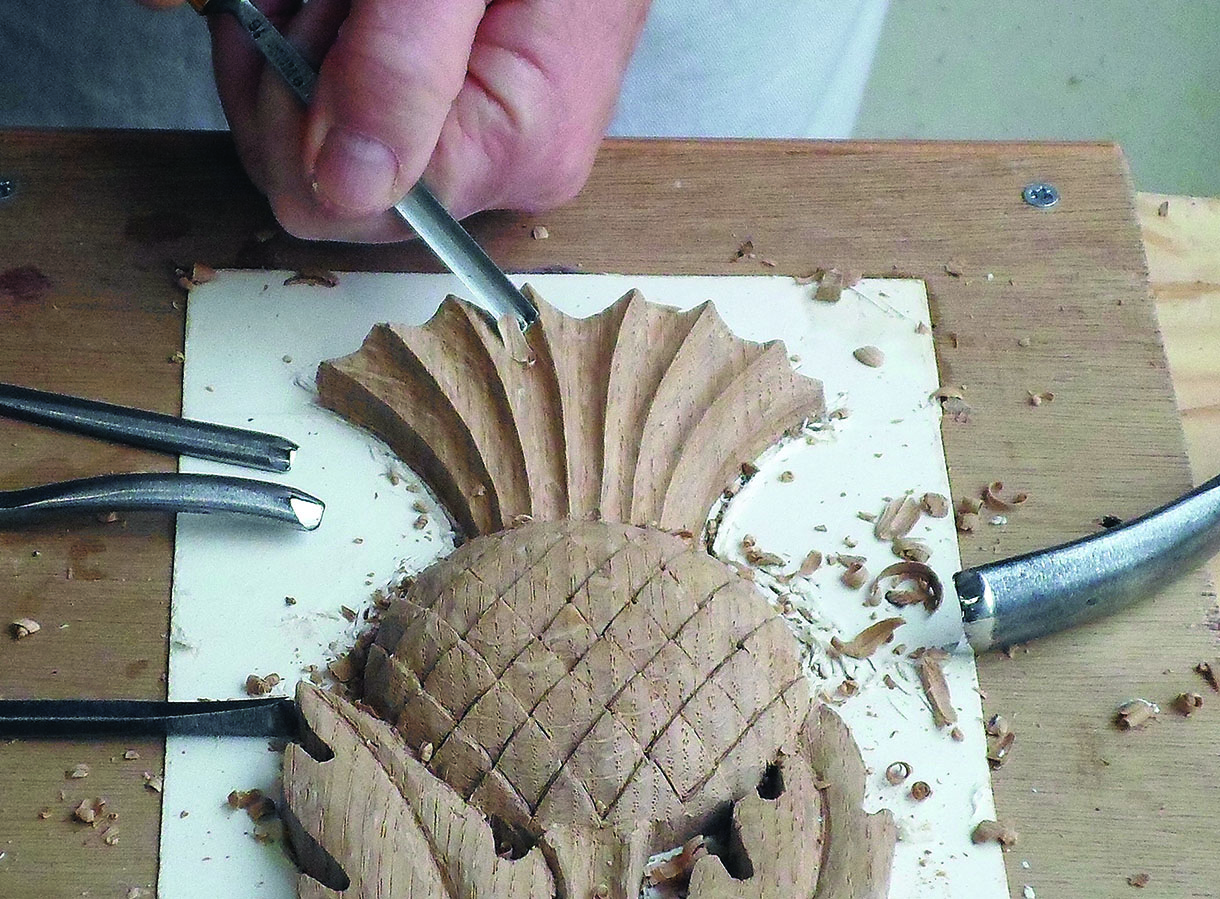 18. Now we have to carve the fan of curving flutes that represents the long thin petals of the thistle. Use the No.8 gouge to cut the middle of each groove then, working carefully with the grain, work out towards the edge of the groove and use a shallower gouge to create a sharp ridge where it meets the next groove. Each groove must curve gracefully outwards. Carefully cut semi-circles at the top edge of each groove to finish the fan 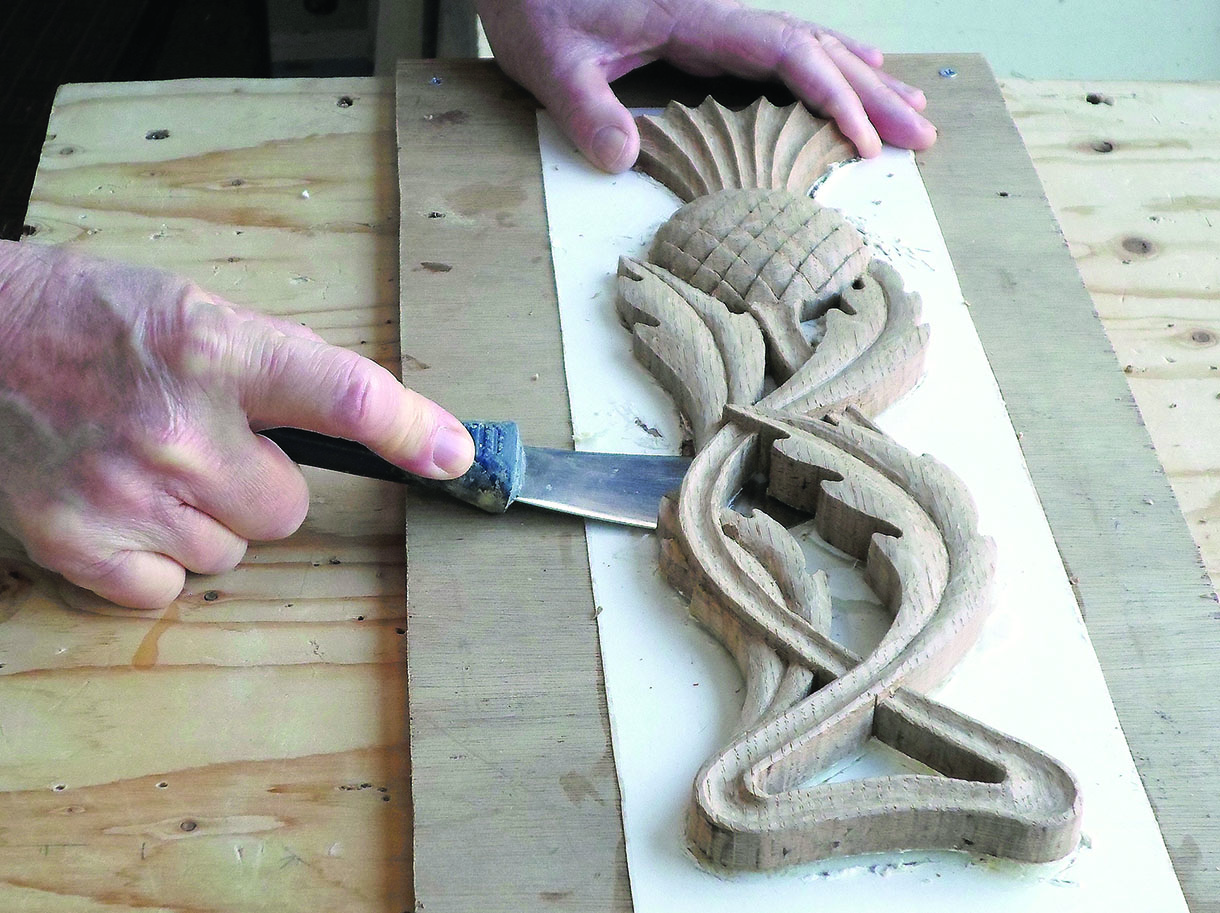 19. Finish the carving to a good tooled finish without using abrasives, then prise it off the backing board by sliding a flat knife between the wood and the card. Scrape off all remaining paper and glue from the back 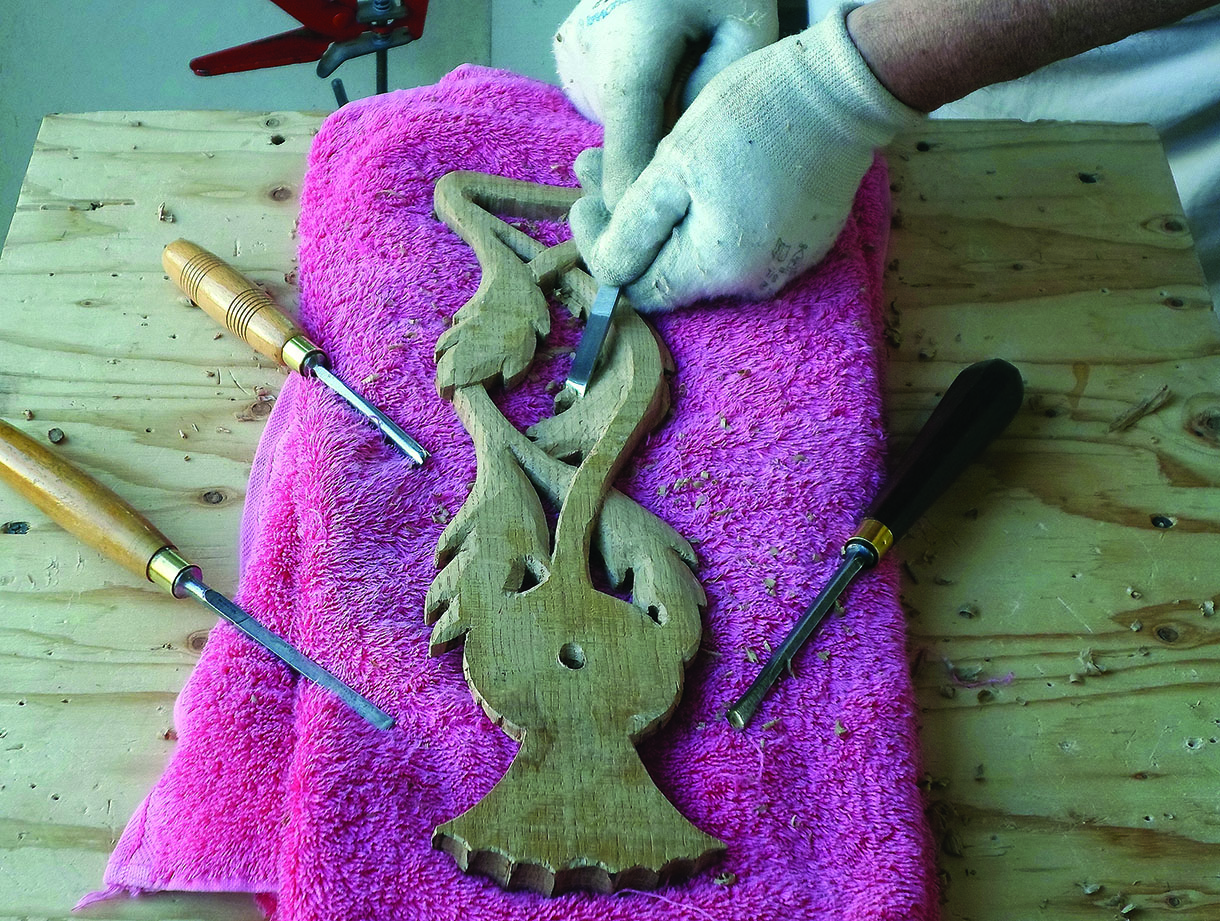 20. Place the carving face down on a soft surface and carefully undercut the edges and underparts of the leaves and stems so they will all appear to be a similar thickness from the front. The leaf edges should be about 6mm thick. Make a hanging hole in the back of the flowerhead. Wear carving gloves to protect your hands now that the carving is not secured 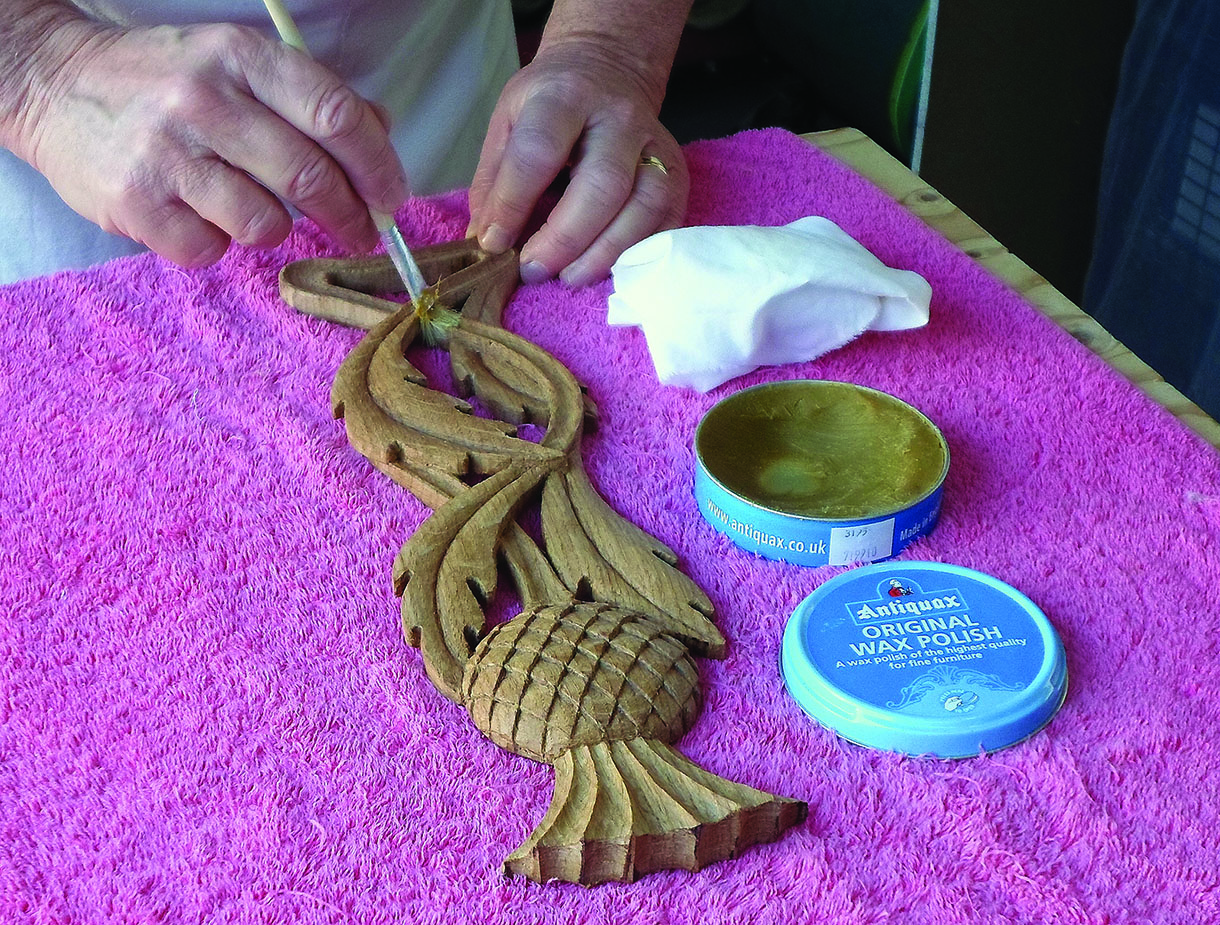 21. Finish by polishing the whole panel with a good light-brown wax polish to bring out the natural colour of the oak. Use a small stiff brush to work the wax into all the crevices, then buff it up to a soft sheen with a dry cloth 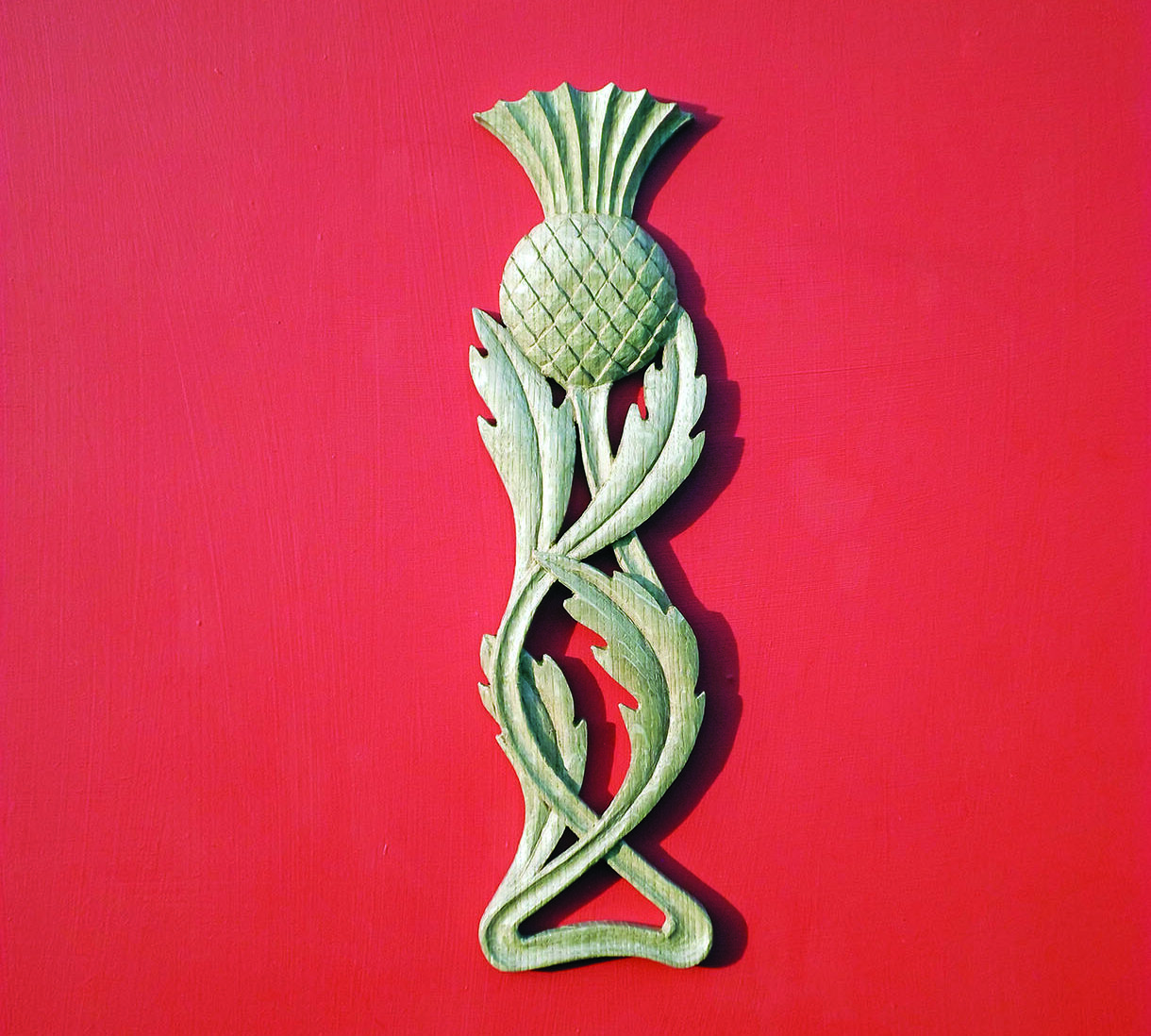 22. The Arts & Crafts thistle is now complete and can be hung on the wall to be admired by passing Scots