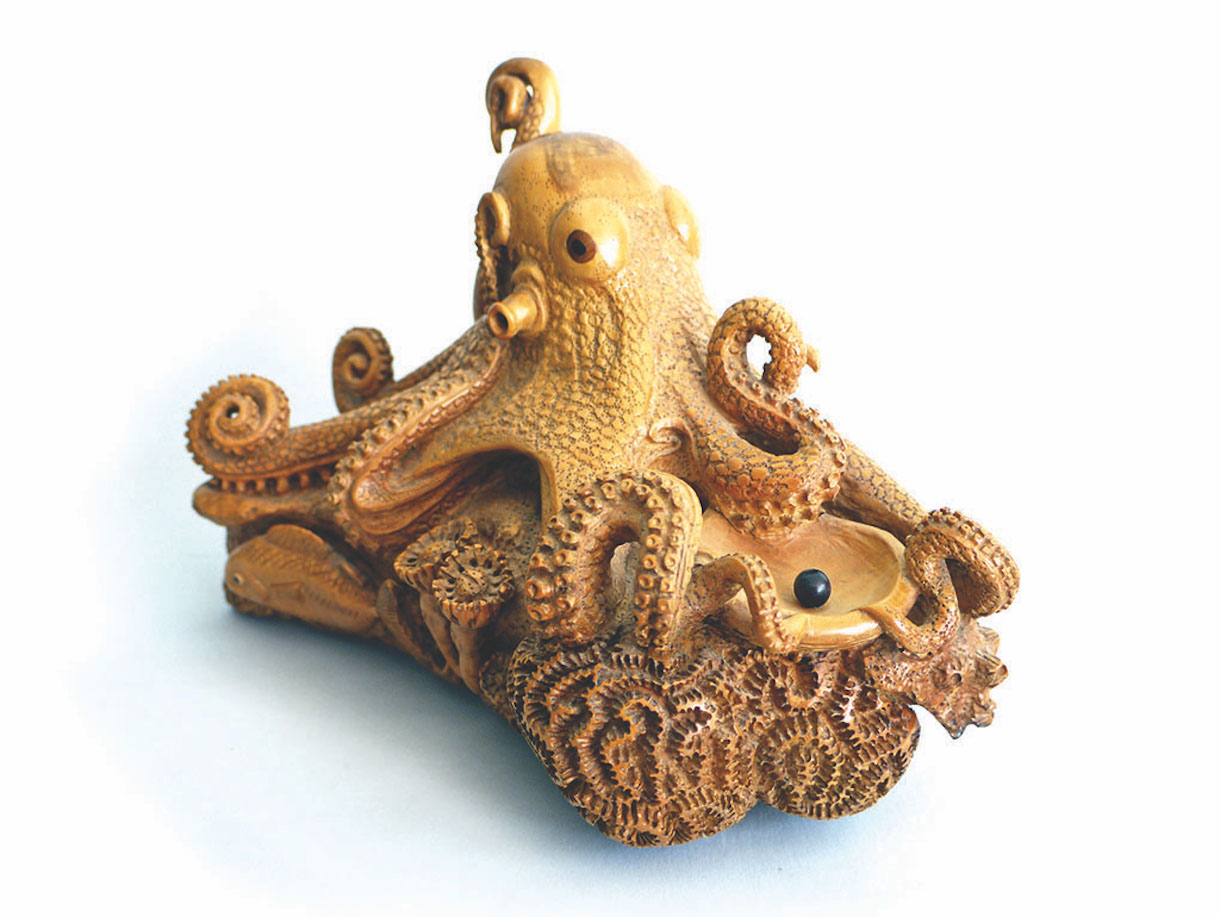 To most people the octopus is an ugly creature, but they are intelligent, interesting, far from ugly, and
use camouflage and stealth to hunt. They vary considerably in size from the tiny deadly poisonous blue ringed octopus to very large creatures several metres long. I have had a couple of encounters with octopuses, which have inspired me to have a go at carving them, culminating in this carving which I call ‘Guardian of the black pearl’.

Design
The dimensions of this carving are 220 x 165 x 165mm and it is carved from a boxwood (Buxus sempervirens) tree stump. Boxwood was chosen not only for the stump to work with, but also because boxwood hold incredibly fine detail. I drew a quick sketch from which I created the octopus.The tentacle sticking up in the air is actually a root of the tree stump, and so the grain runs along the stump making it less easy to break – but then thought I would try to add other marine creatures to show it in a natural reef like setting. I wasmable to incorporate two brain coral, sea anemones, sea squirts, limpets, two little fish, a hermit crab in a shell and seaweed, plus an oyster shell with a black pearl in it, made from African blackwood (Dalbergia melanoxylon). 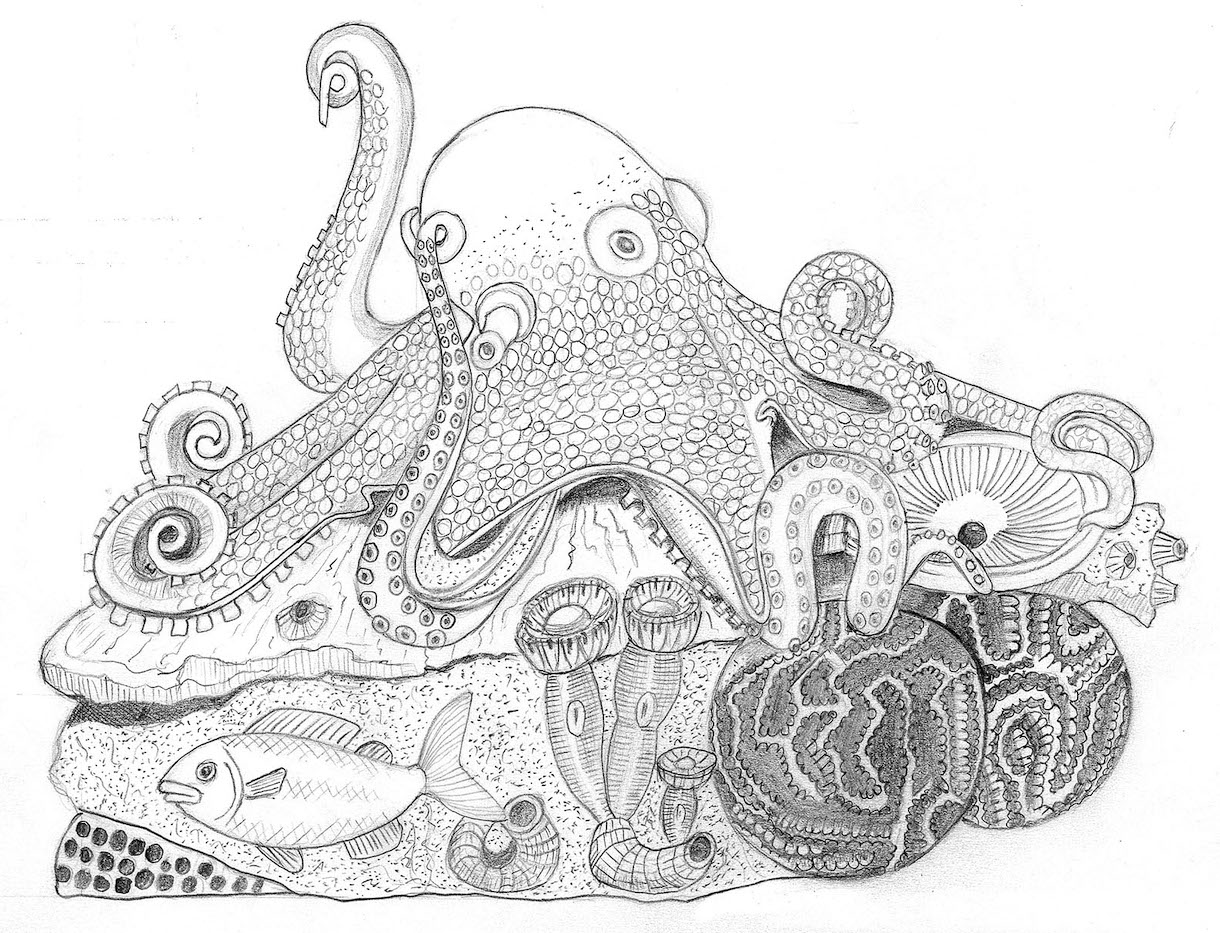 It is likely to be hard to copy this exactly, but hopefully this will inspire you to have a go and create your own octopus carving, adding those elements and extras you want in order to create an individual carving. 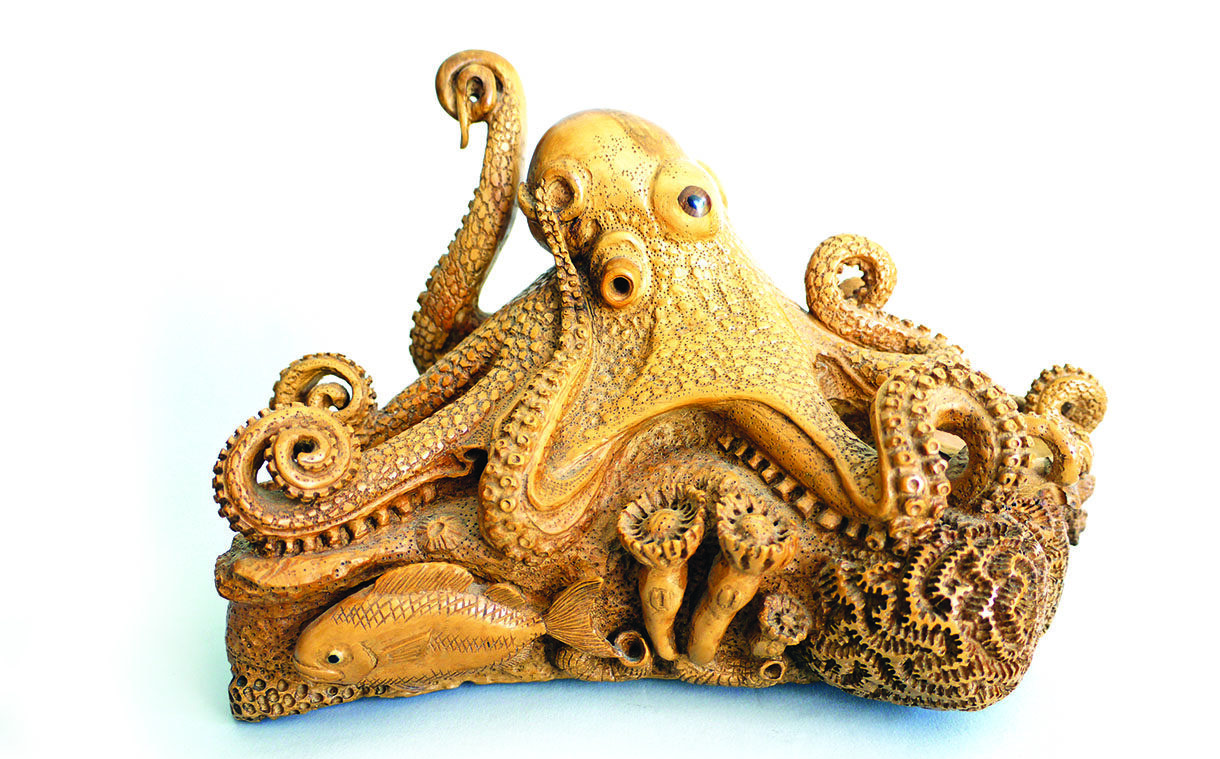 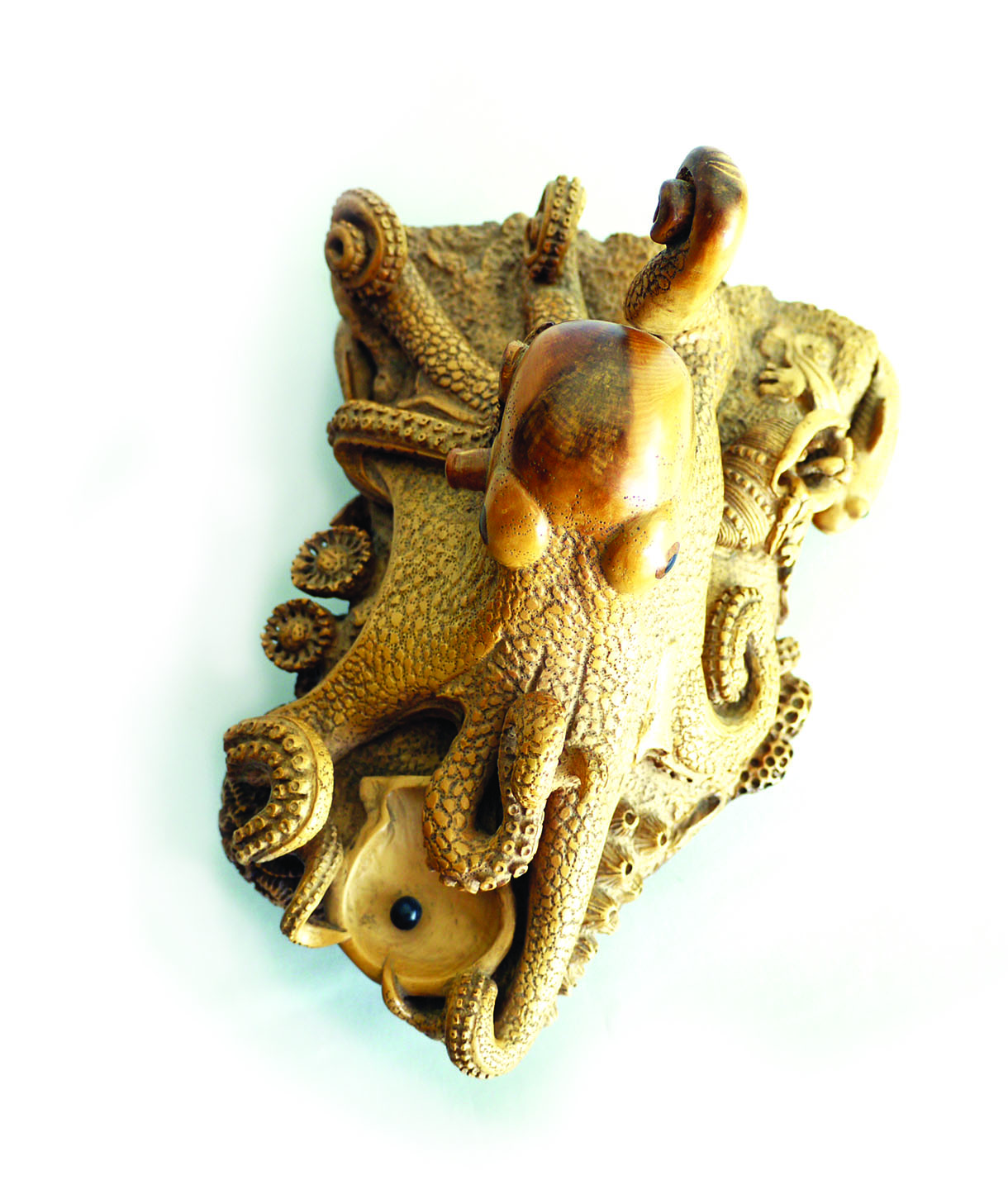 Did you know?
• Octopuses are actually boneless with the hardest part of their body being their head. They not only lose their shape when they leave the water, but have the ability to squeeze into small spaces.
• Octopuses actually have blue blood because their blood is copper based, which is great for transporting oxygen in a cold, low-oxygen environment like the ocean! 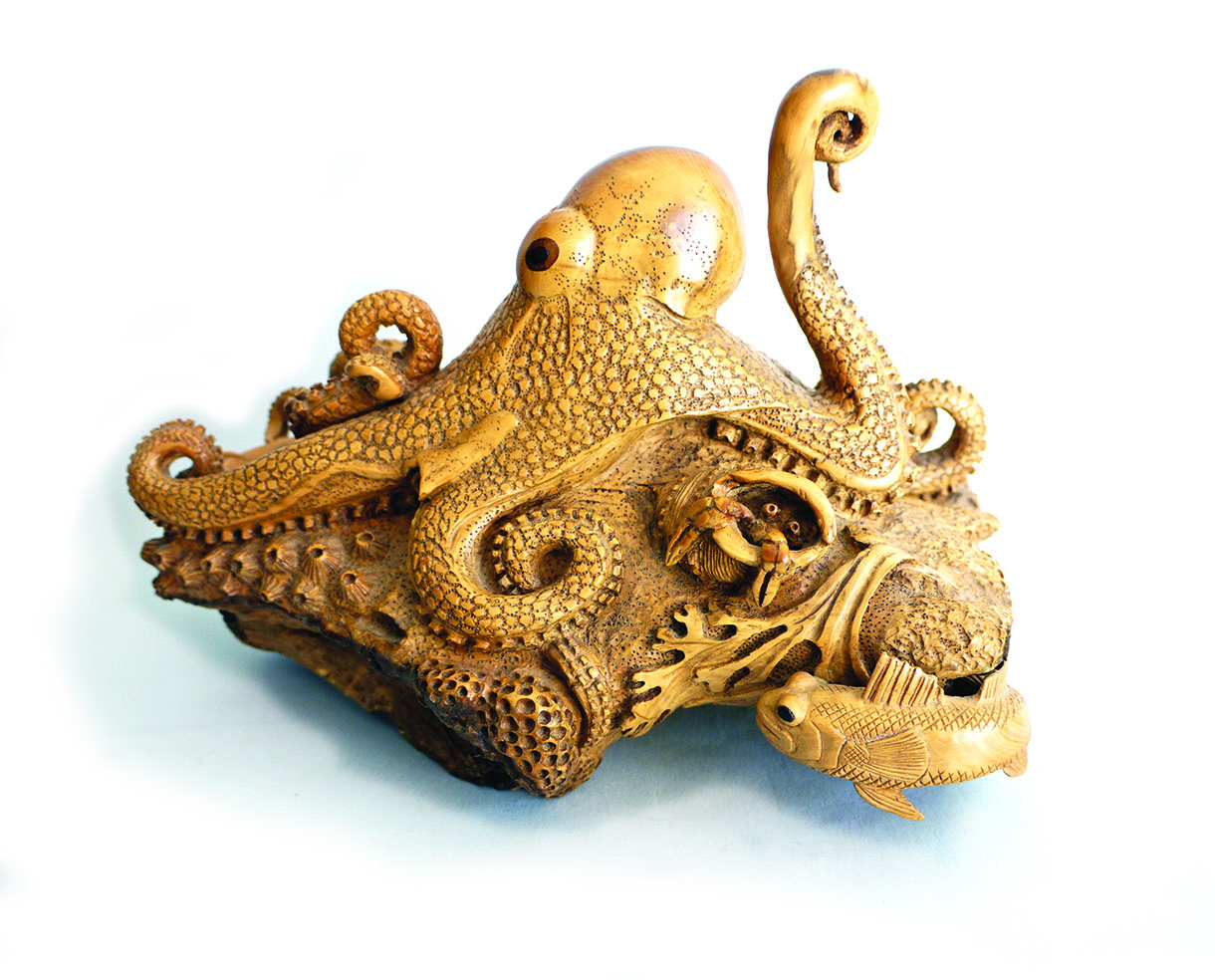 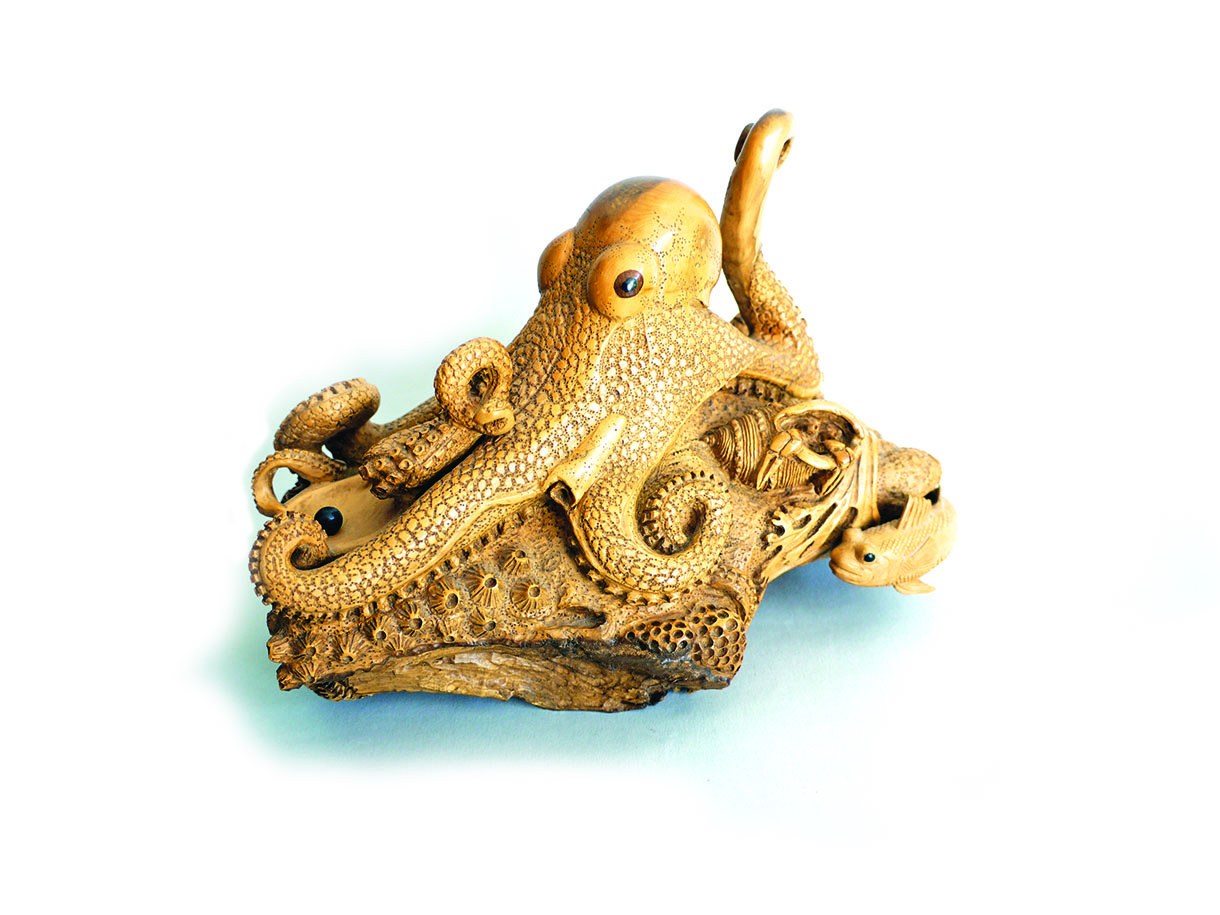