Regency Chair Restoration:
Louise Biggs’ clients can always take comfort from the quality of her workmanship as this restoration job proves 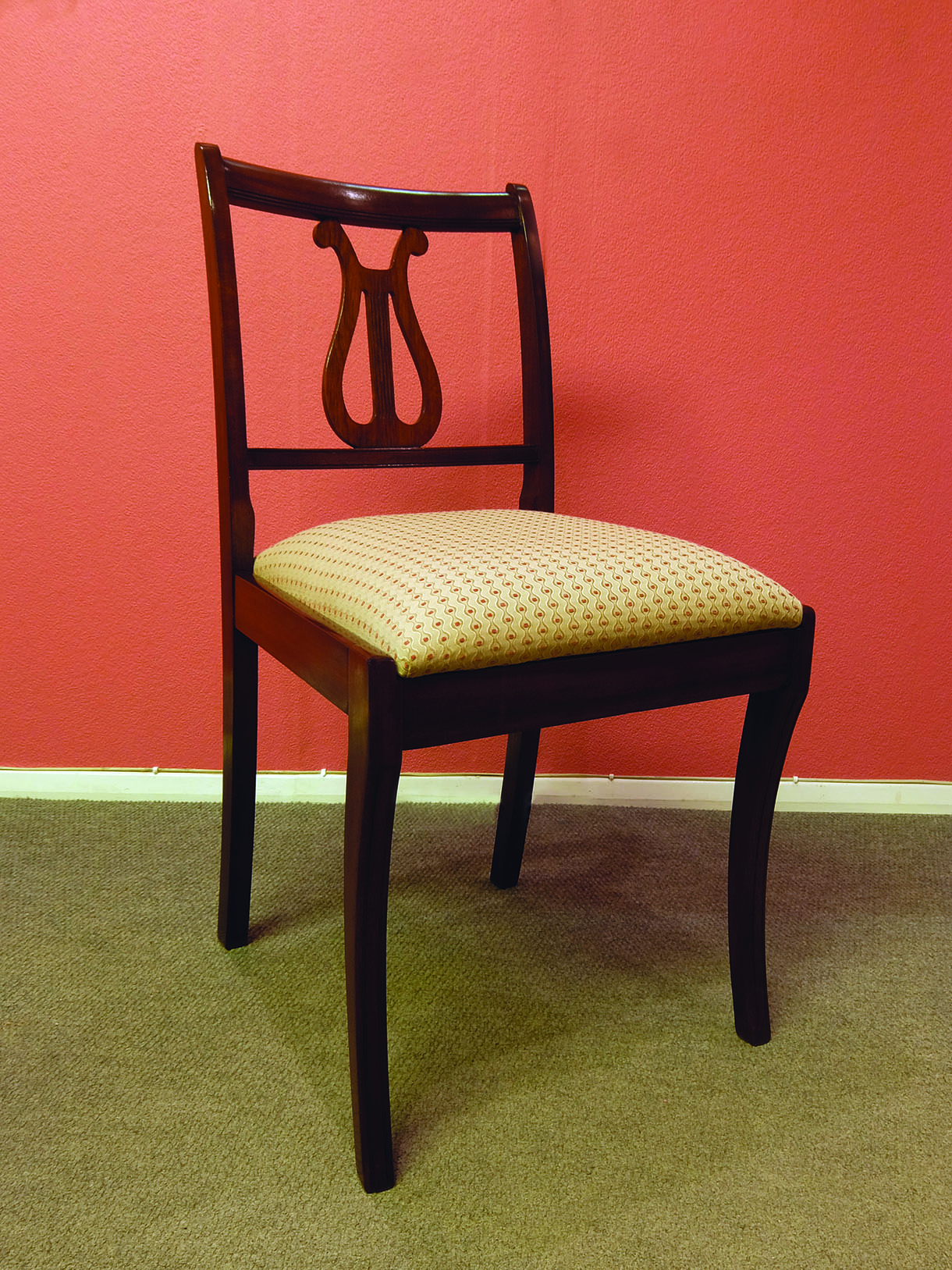 I was asked to view a set of dining chairs (along with the matching dining table) that were in need of restoration. My customer inherited the set from her grandparents. The sabre legs and lyre-shaped back splat designs date from the Regency period, circa 1810–1820. More varieties of wood were being used from this period onwards and these were made of sapele. Used on a daily basis, I restored the chairs in two lots, to leave the family something to sit on. I took the three chairs in the worst condition first.

Assessment
• All the chairs had loose joints, some had parted completely and some were pivoting within the joints.
• The arms on the two carvers were loose.
• On one chair, the top front of the sabre leg had broken away, exposing the mortise and tenon joint.
• The polish had not only been affected by water on the bottom half of the legs, but the backs of some had clearly been too close to a heat source at some point.
• The seats were to be re-covered, but after discussion it was decided they were to be completely re-upholstered.
• With the polish in a degraded state and bleached, it was decided that I needed to strip and re-polish all of the chairs, bringing them back to match their original colour and the dining table. 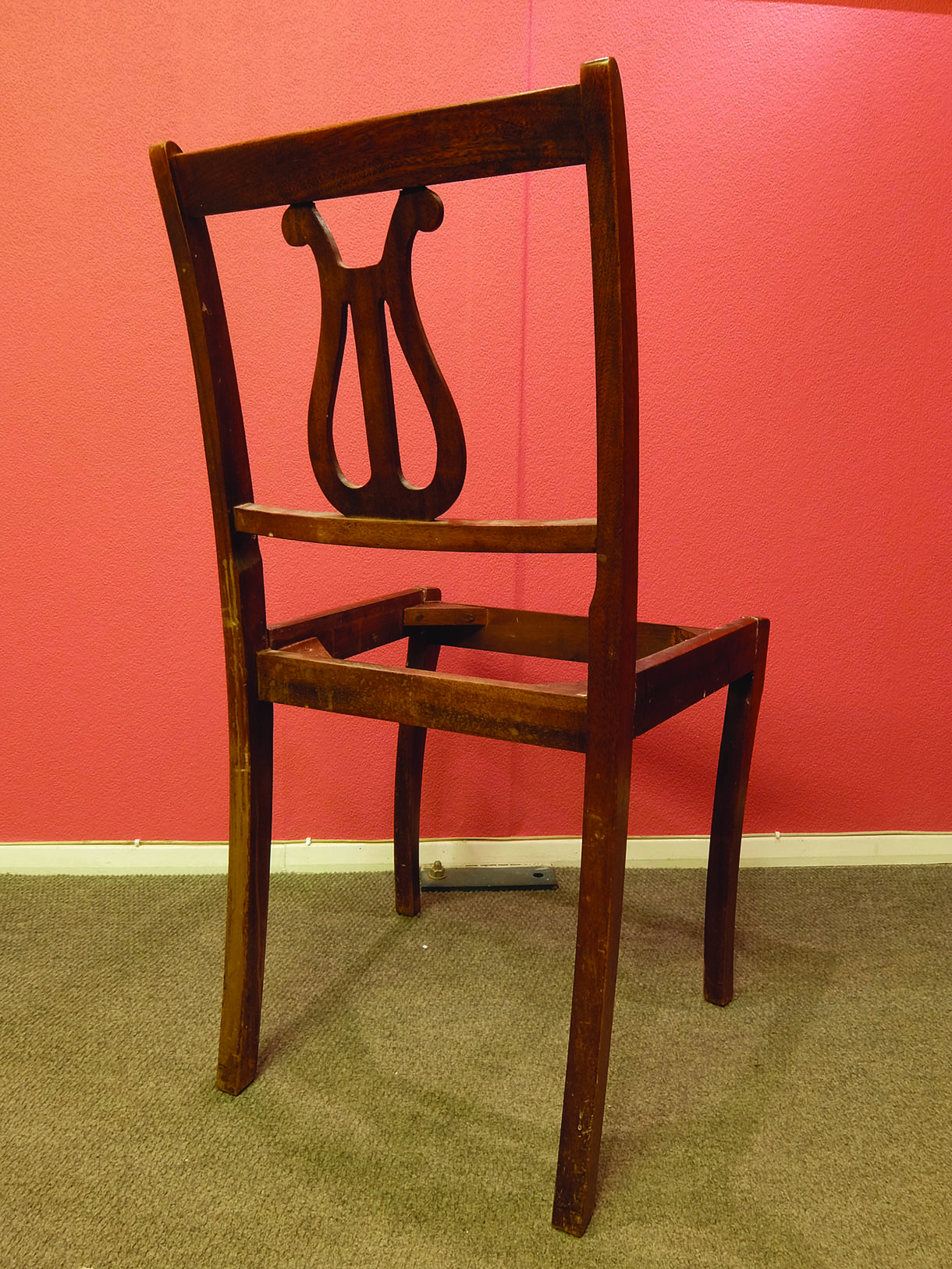 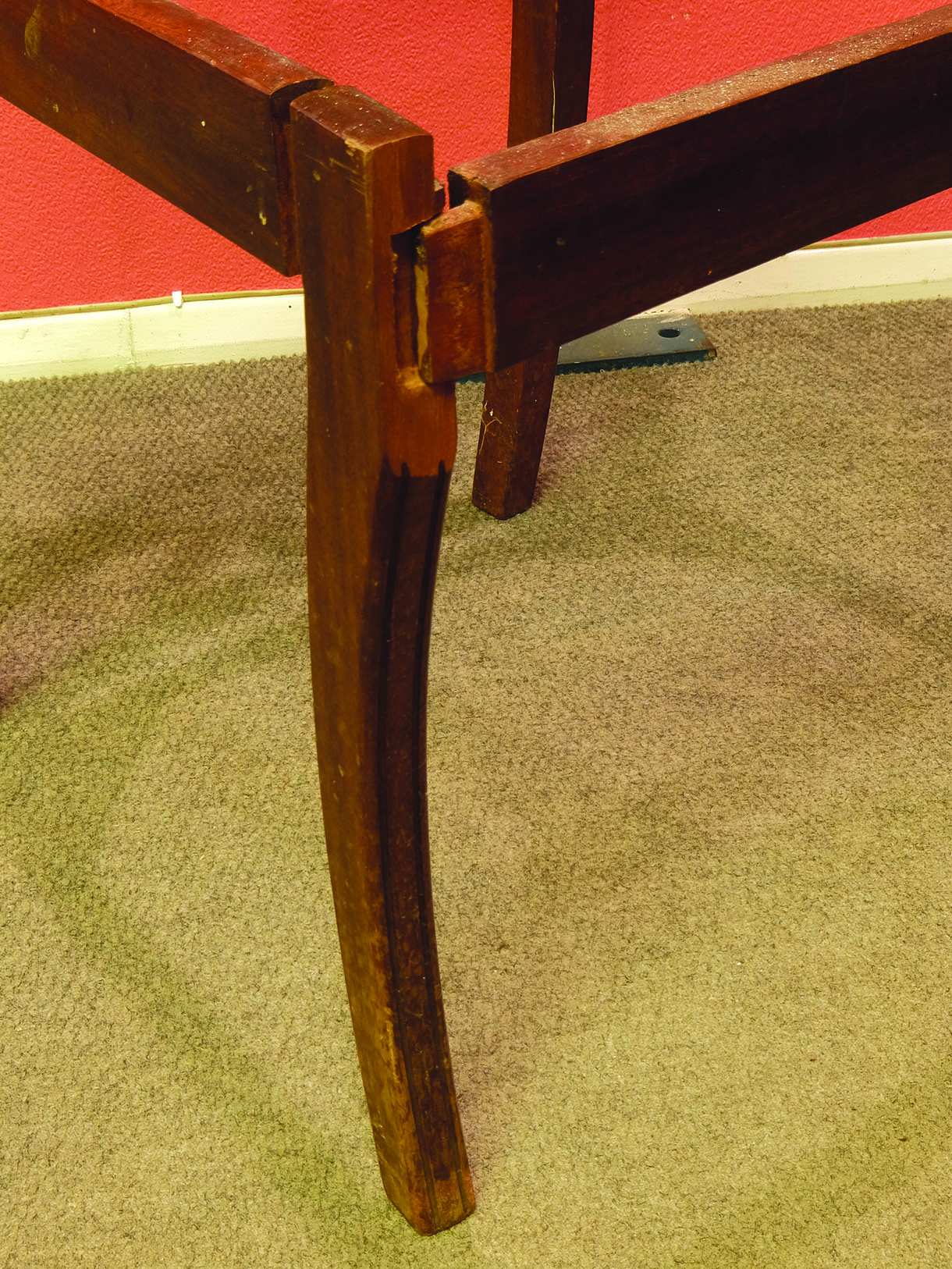 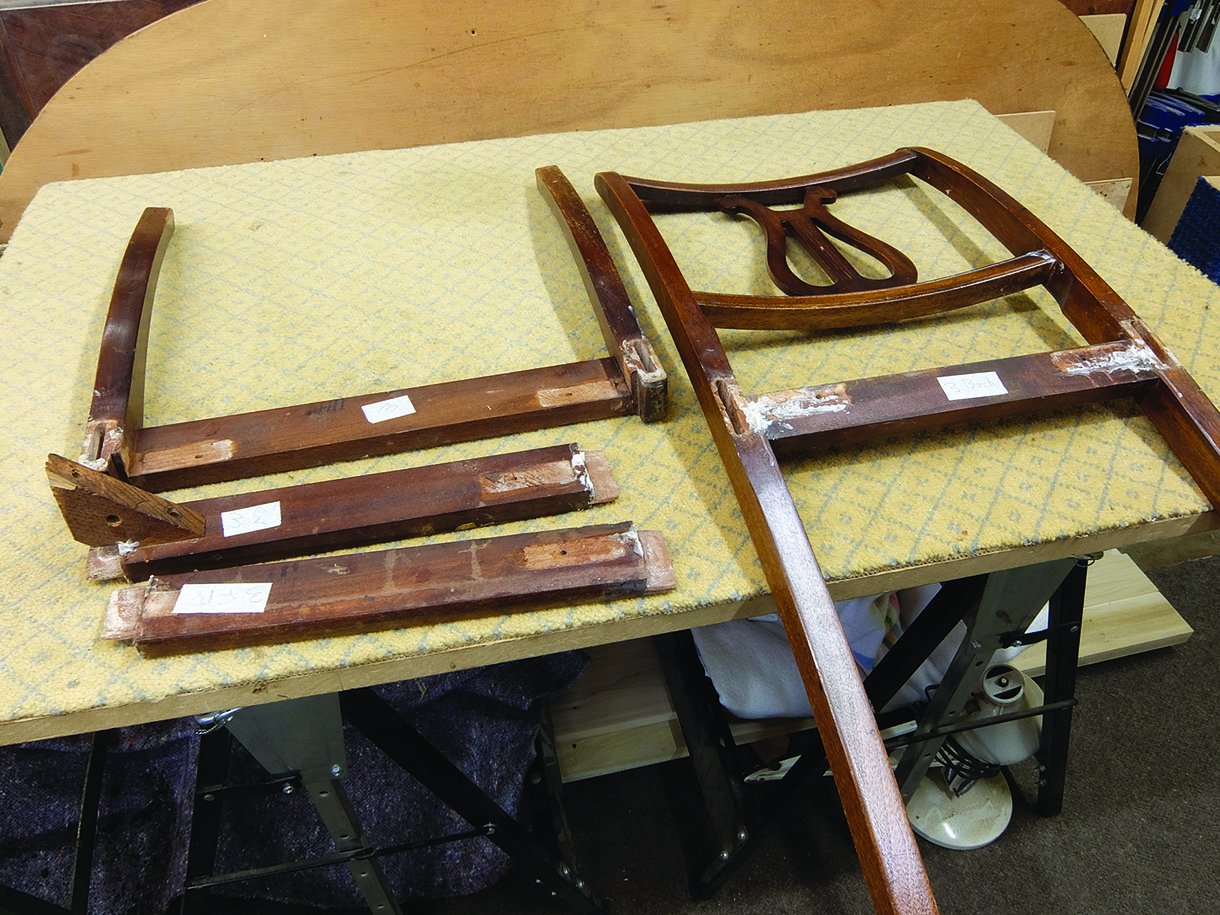 1. When knocking apart more than one chair, I always clearly label all components of each chair so that they go back the way they came apart. I use masking tape on inside faces and write on the tape before placing on the wood as pen or pencil can leave an indentation. Polished surfaces require low tack tape and a test first to make sure the tape does not disturb the polish when peeled off 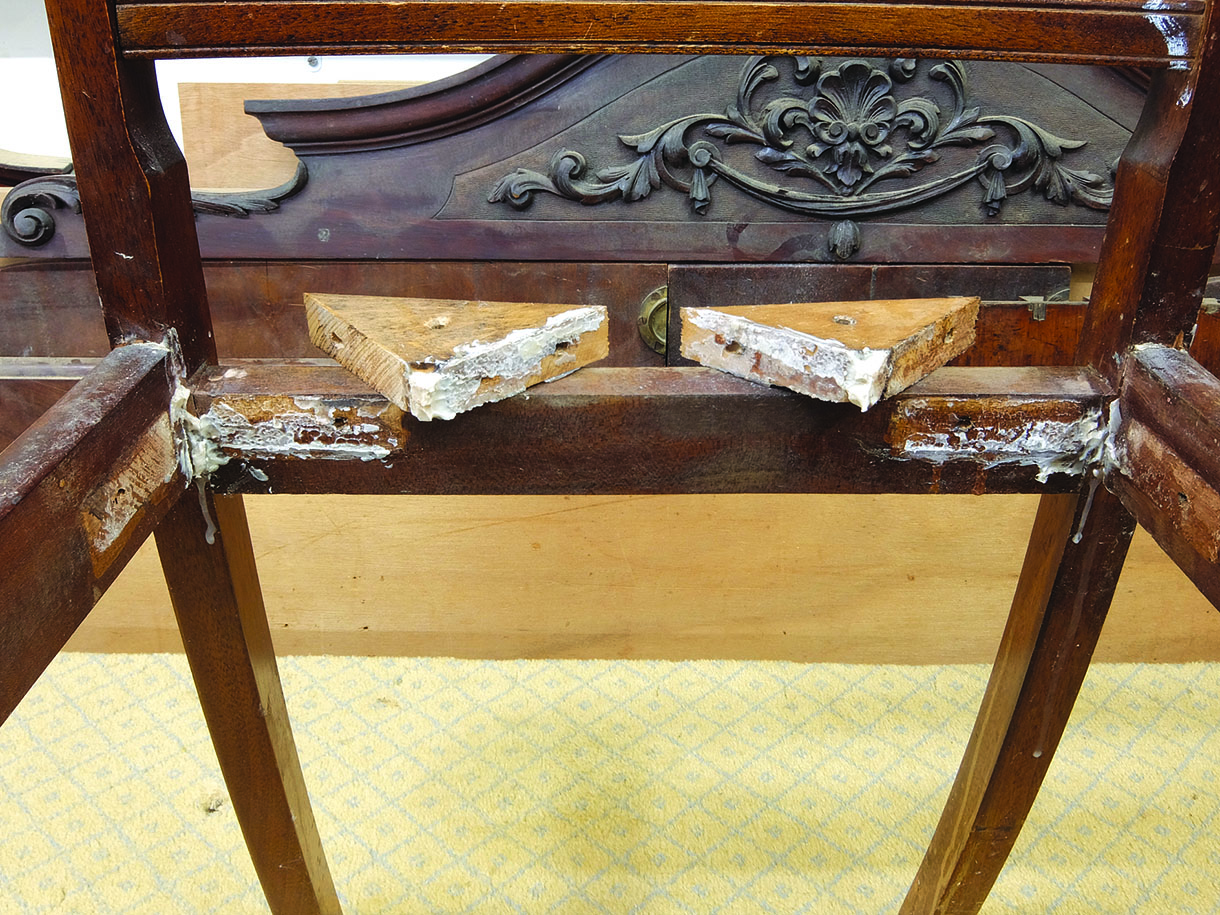 2. I started by removing the corner blocks, which had been re-glued to try and stabilise the chairs. As the screws on corner blocks tend to get some glue in the threads when they are put in, I usually start by tightening them, this usually breaks any glue residue and allows you to then unscrew as normal. Once removed, the old glue can then be cleaned off 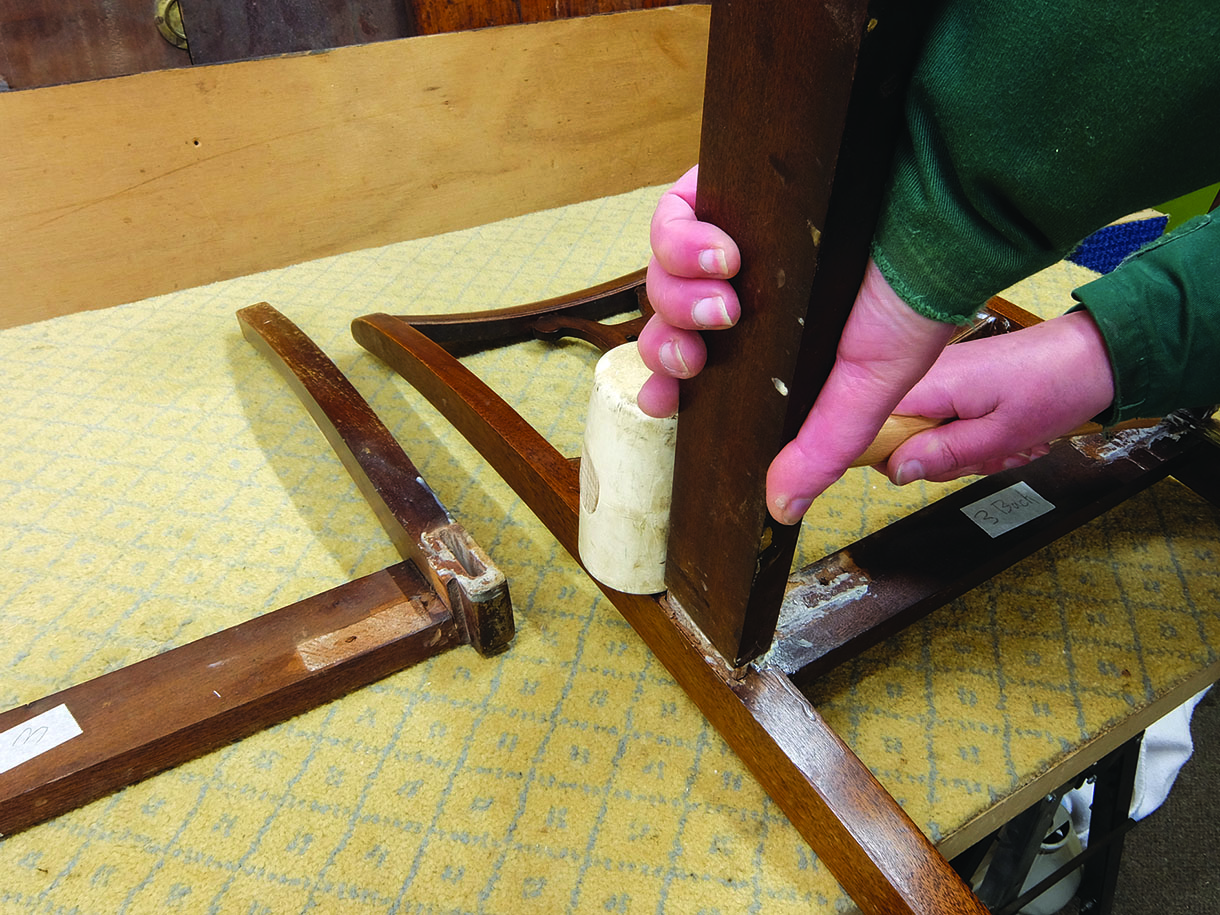 3. A visual check is needed over each joint area for evidence of any nails or wooden plugs which disguise screw heads. With the absence of these the frames were knocked apart using a rubber mallet. If a joint is loose but will not come apart and is glued with animal/hide glue, I dribble or inject methylated spirits into the joint as this will dissolve the glue, although caution is needed to protect a French polish finish 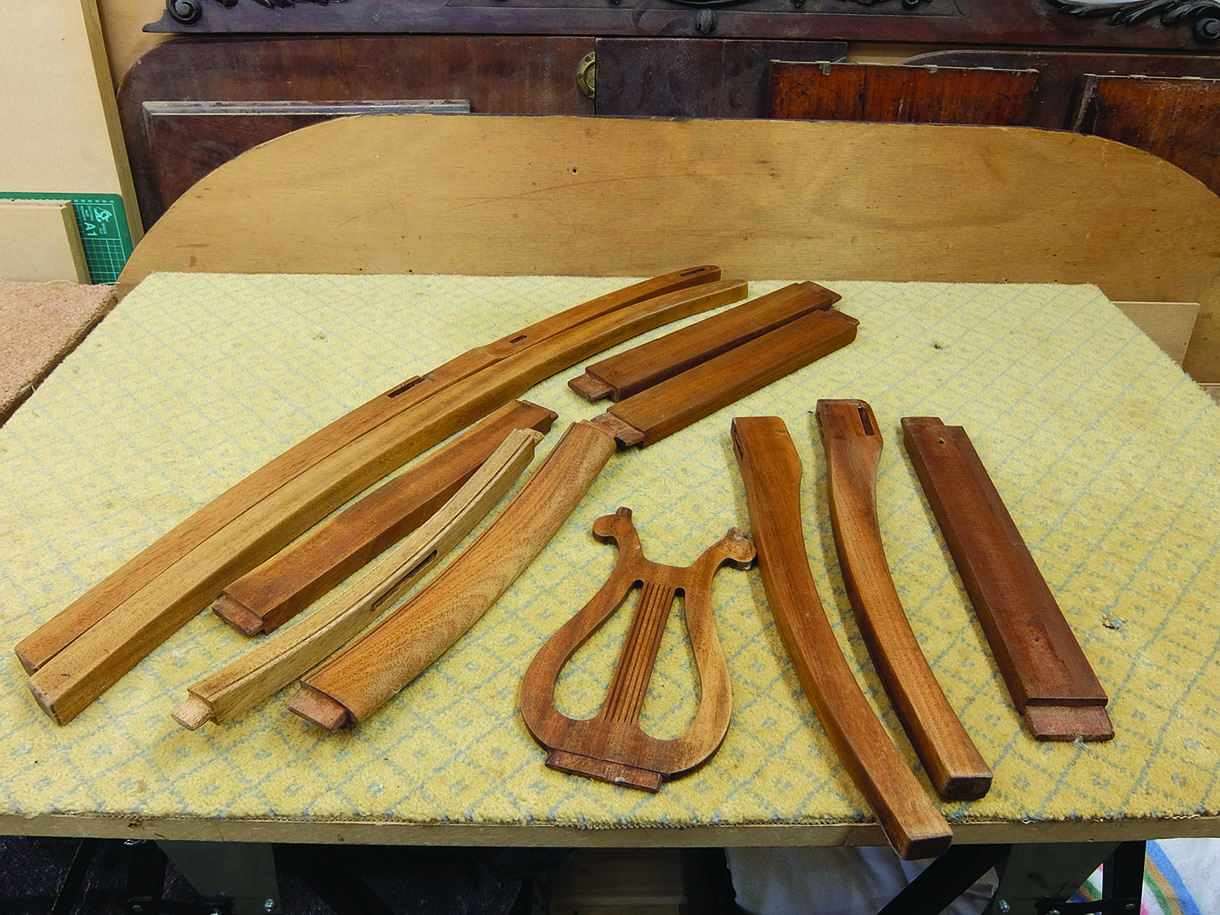 4. The joints could then be cleaned up using a chisel to remove all the old glue, wax and dirt. I keep an old chisel for this job as the hard glue, etc. will damage the edge of a chisel. Before re-gluing the chairs and having the necessary face shield and mask in place, I stripped the component parts of the existing finish, neutralised them with methylated spirits and then sanded all the parts to remove any residual stripper debris and watermarks and prepared them for re-polishing. With a new front leg being made for the one chair, the broken leg would be kept as a colour matching pattern 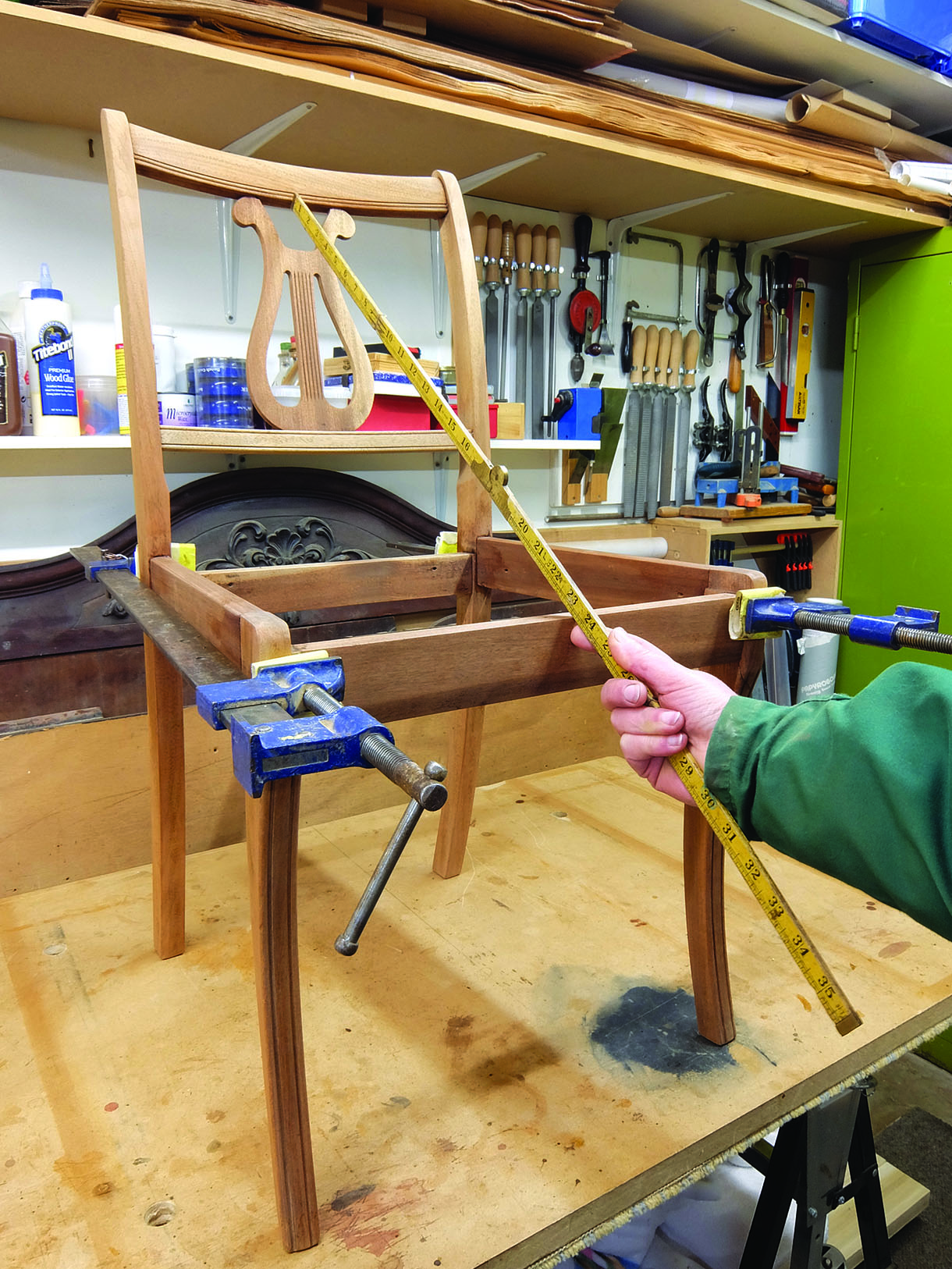 5. Using sash cramps and animal/hide glue I then re-glued the back and front frames using wooden blocks to prevent the cramps damaging the frames and checked that they were square. The frames were glued up with the side rails in the same way. Depending on the shape of the legs and seat plan, wedge shaped blocks would be needed in order to clamp the chairs more effectively. It was important to check the ‘rake’ of the chair to keep the angle of all the backs the same. Ideally, this measurement is taken from the most stable chair, but the ‘rake’ on carver chairs can differ 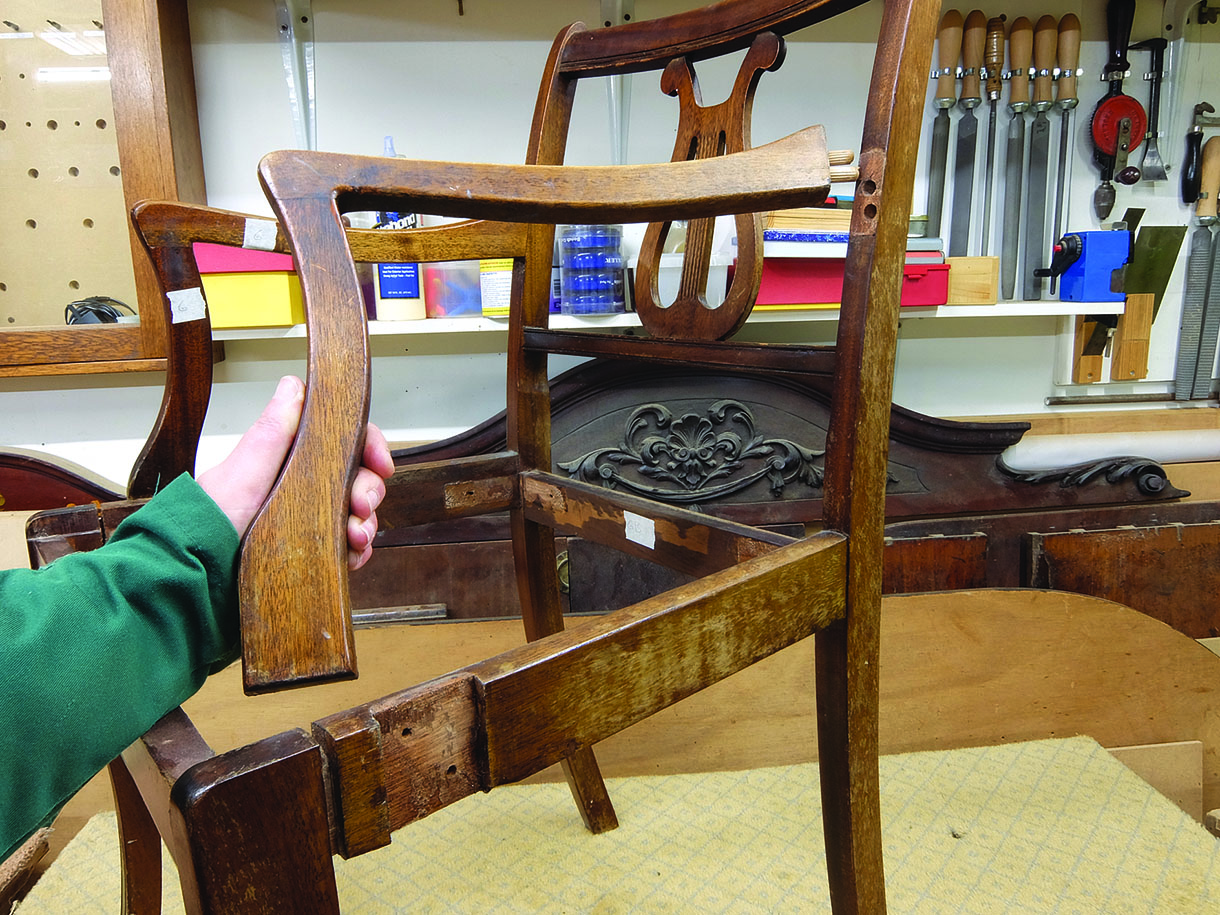 6. With the carver chair arms, the screws joining the bottom of the arm to the seat rail were removed and the dowel joint where the arms join the back legs gently tapped apart, the joints could then be cleaned up 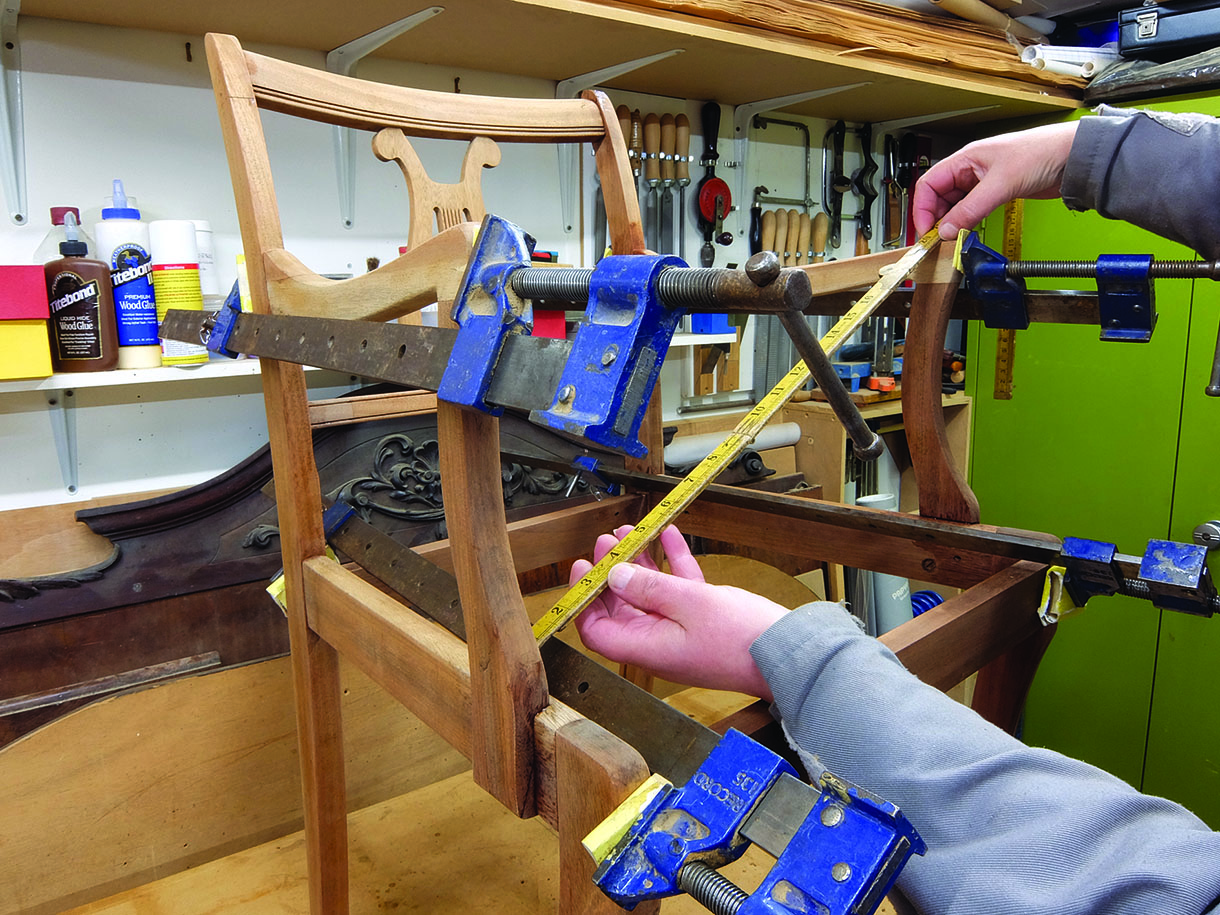 7. When gluing the frame of the carver chairs, the arms were glued into position at the same time. The screws in the seat rail were replaced and the dowel joint closed using a sash cramp. This ensured that the ‘rake’ of the chair was correct and then I checked for square across the front, where the arm joined the seat rail to the top of the arm, to make sure that both arms were at the same angle 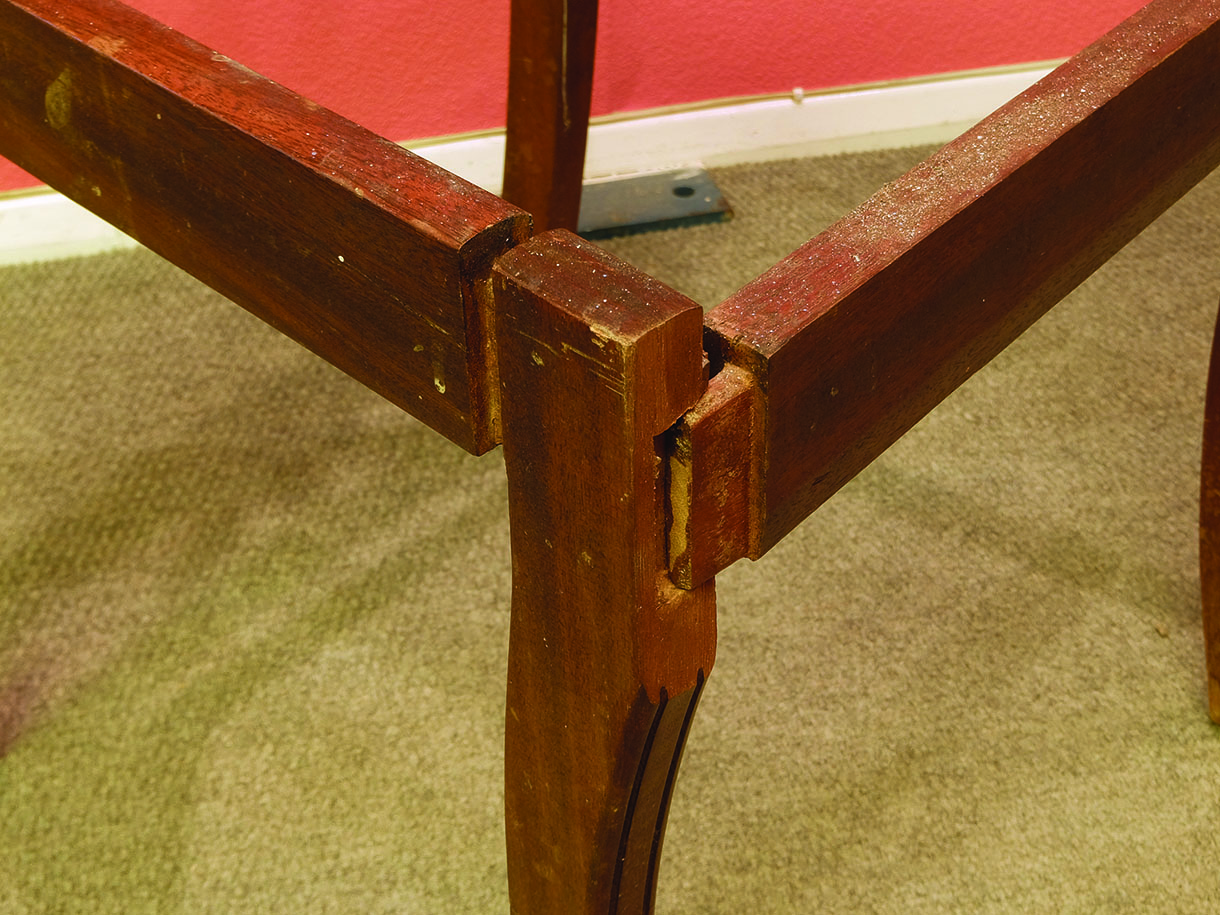 8. Although the customer had the section of broken leg, the joint was always going to be vulnerable as it took the strain of the front frame. There was only a small area to form a glue joint as the remaining area was the mortise for the joint, the side rail mortise also came into the leg at the same height. Strengthening dowels drilled at compound angles would show on the front of the leg but would be ineffective if drilled through from the back and I cannot bring myself to strengthen a repair with screws and nails, if only for the benefit of any restorer following me later on 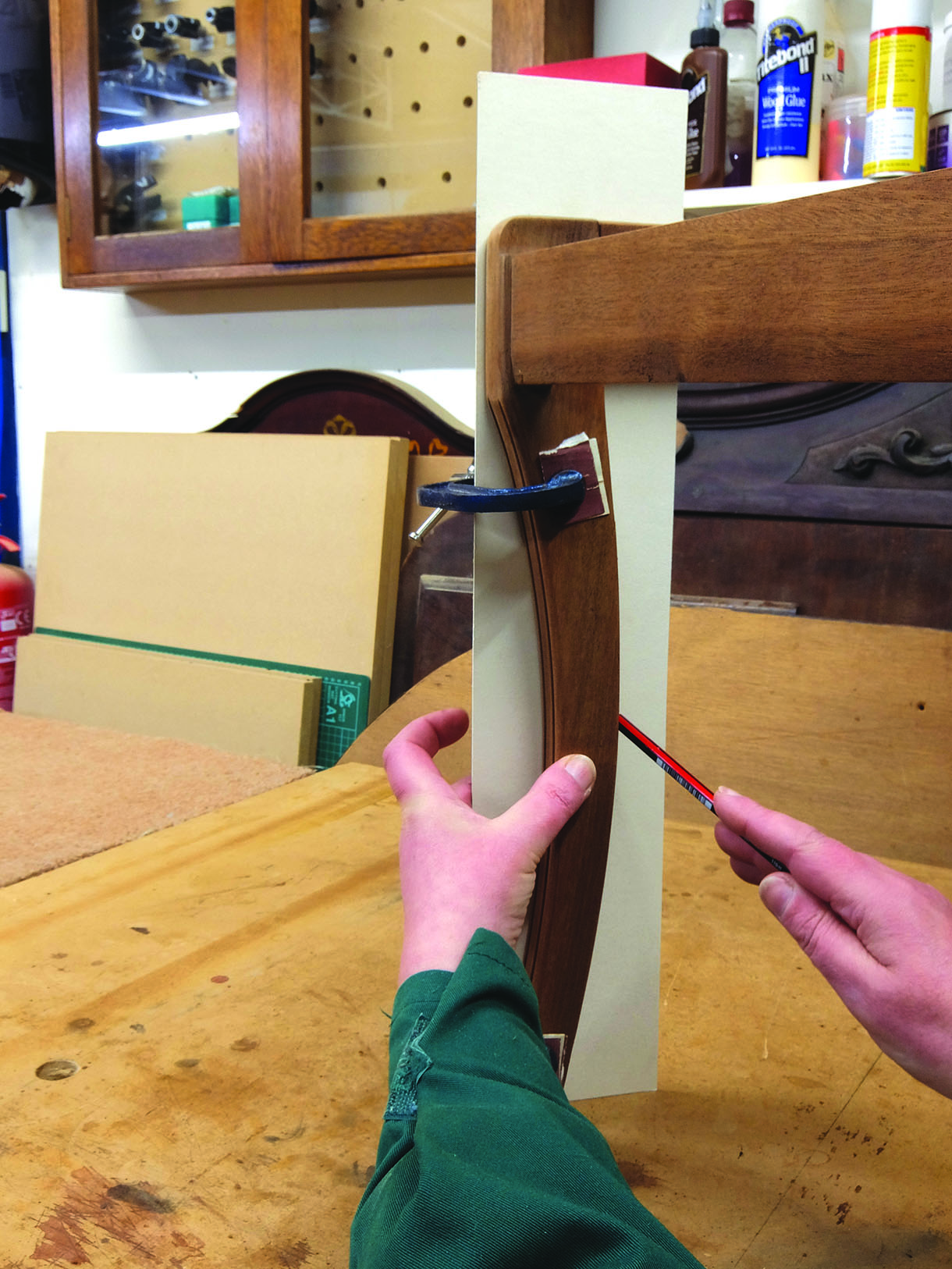 9. The first stage was to make a template of the shape using a piece of card. Using an undamaged front leg from one of the other chairs, I marked around the shape and the positions of the mortises for the front and side rails on the card 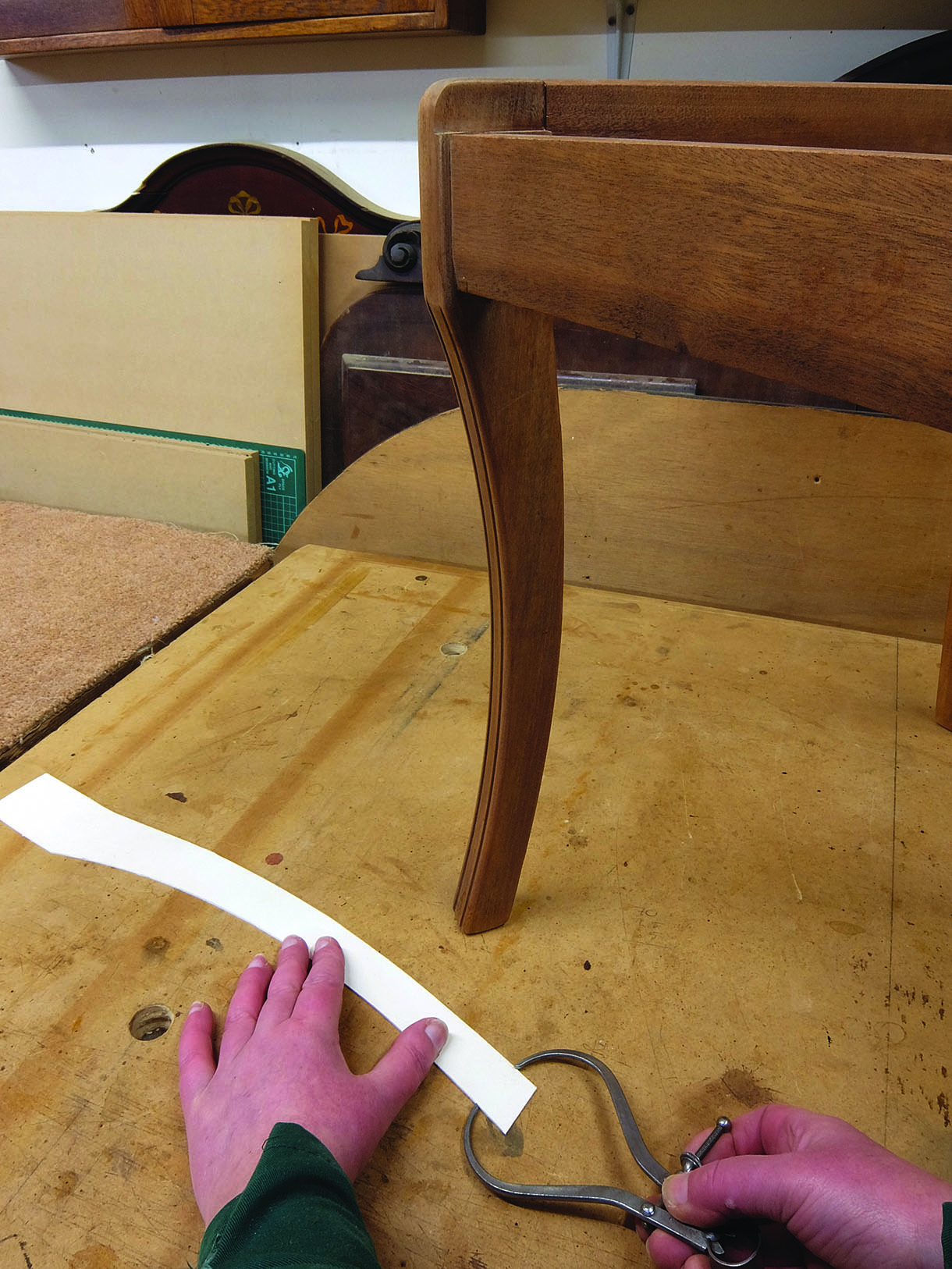 10. Using callipers I double checked the measurements of the leg against the template. This could then be cut to shape using a utility knife 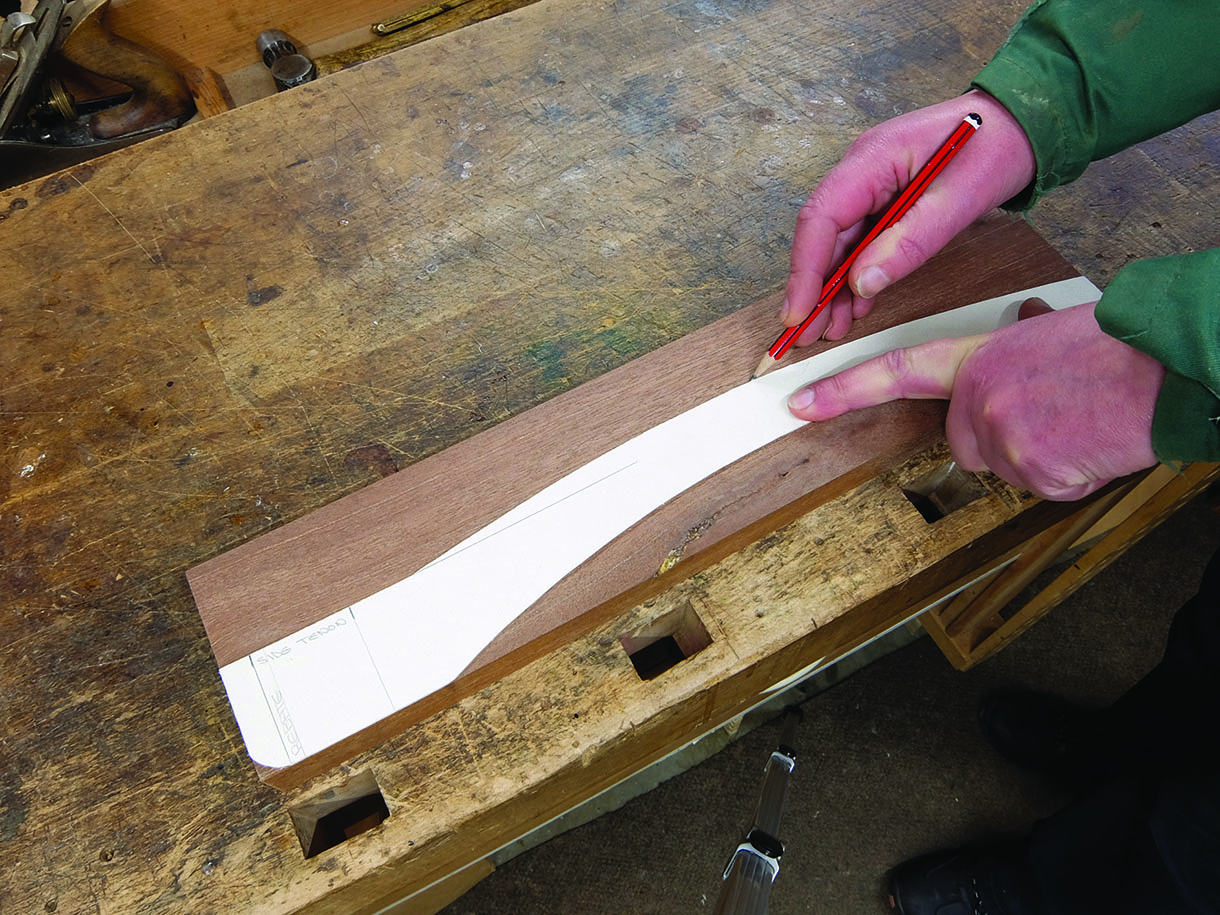 11. The timber was planed to the correct thickness. The shape of the template and positions of the mortises could then be marked on the timber. The surfaces were parallel at the top of the leg, front and back, so I lined up the top front of the leg with the edge of the timber 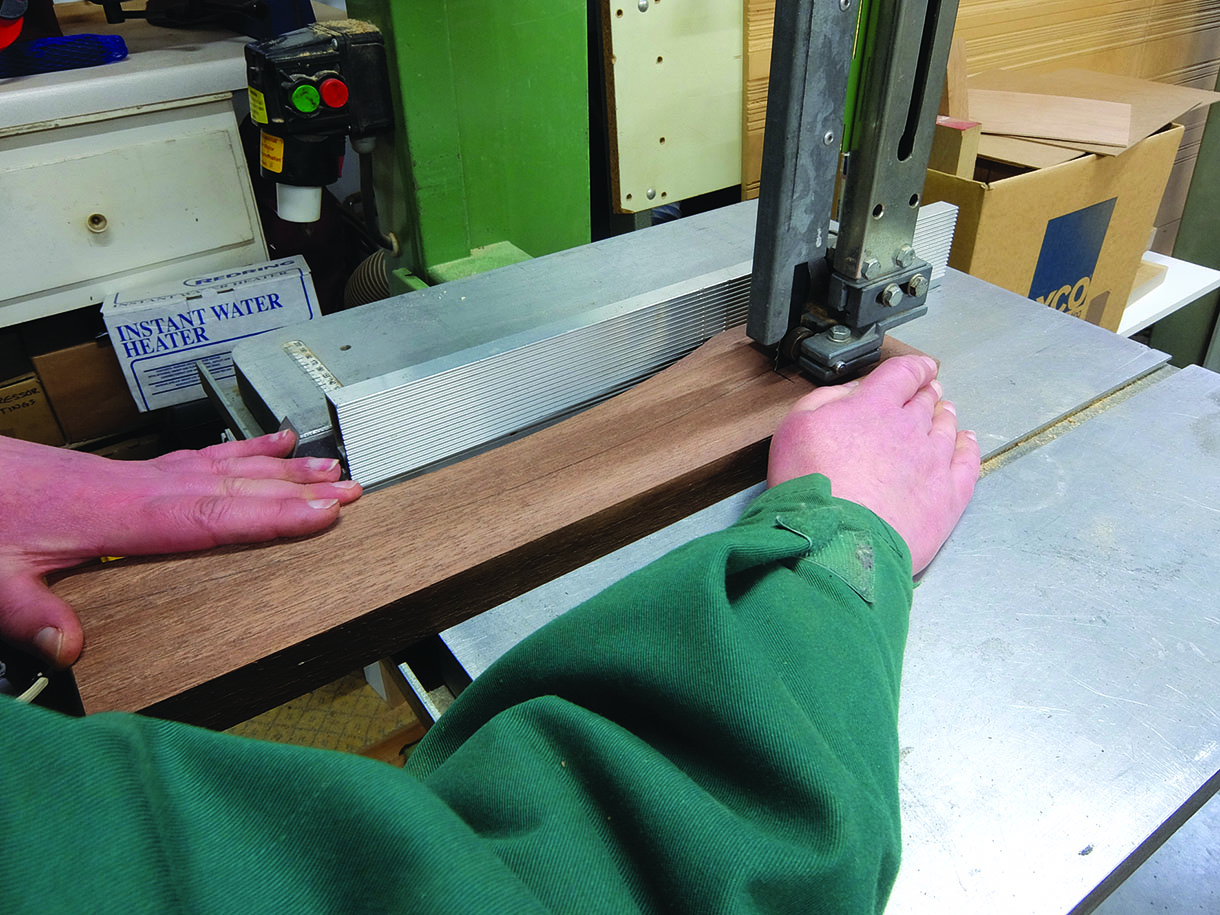 12. I then cut out the shape of the leg using a bandsaw, keeping my hands to the side of the blade. I positioned the fence in order to cut the parallel back edge at the top of the leg, the remainder was cut freehand on the waste side of the line to allow for cleaning up the shape 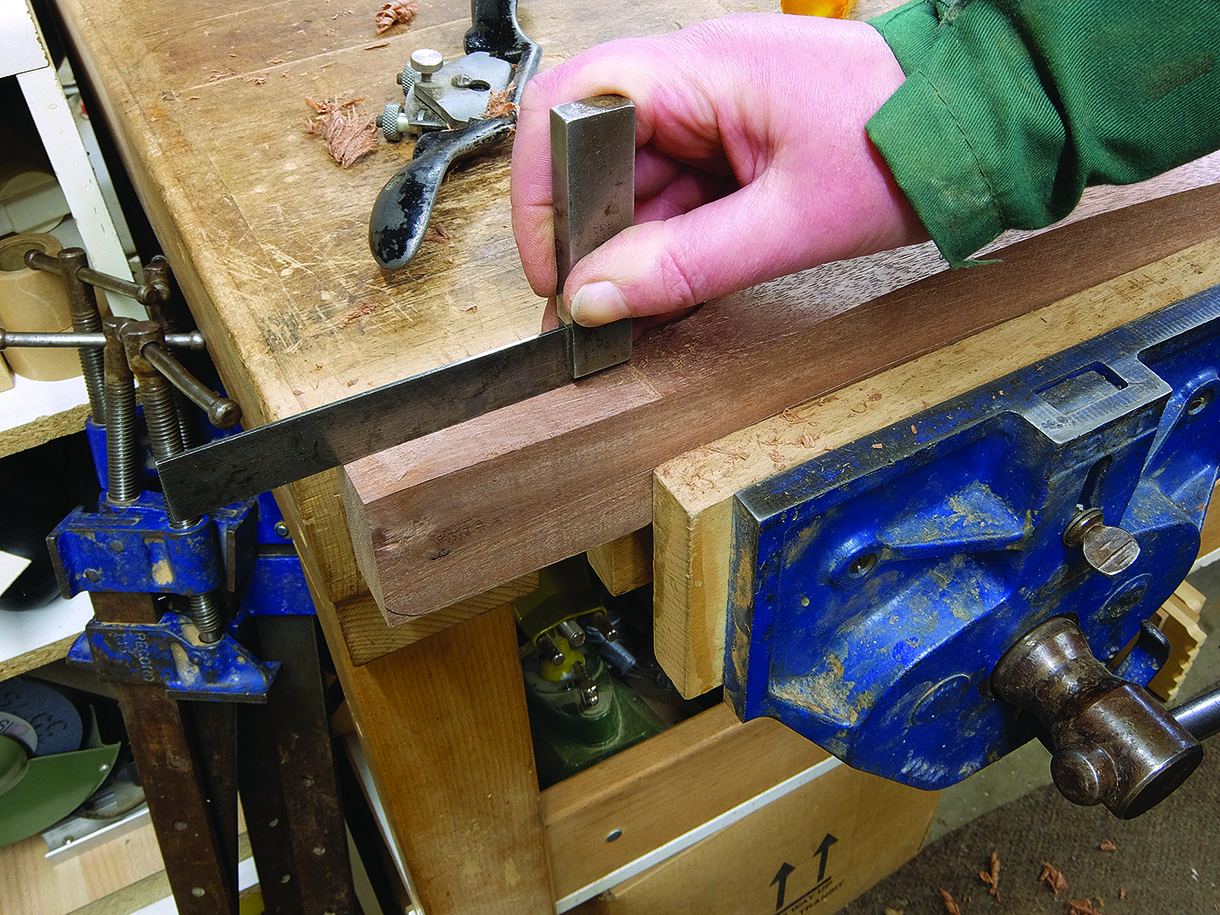 13. I started by cleaning up the surface for the side rail joint using a chisel and spokeshave and made sure they were flat and square to allow for a good fitting joint 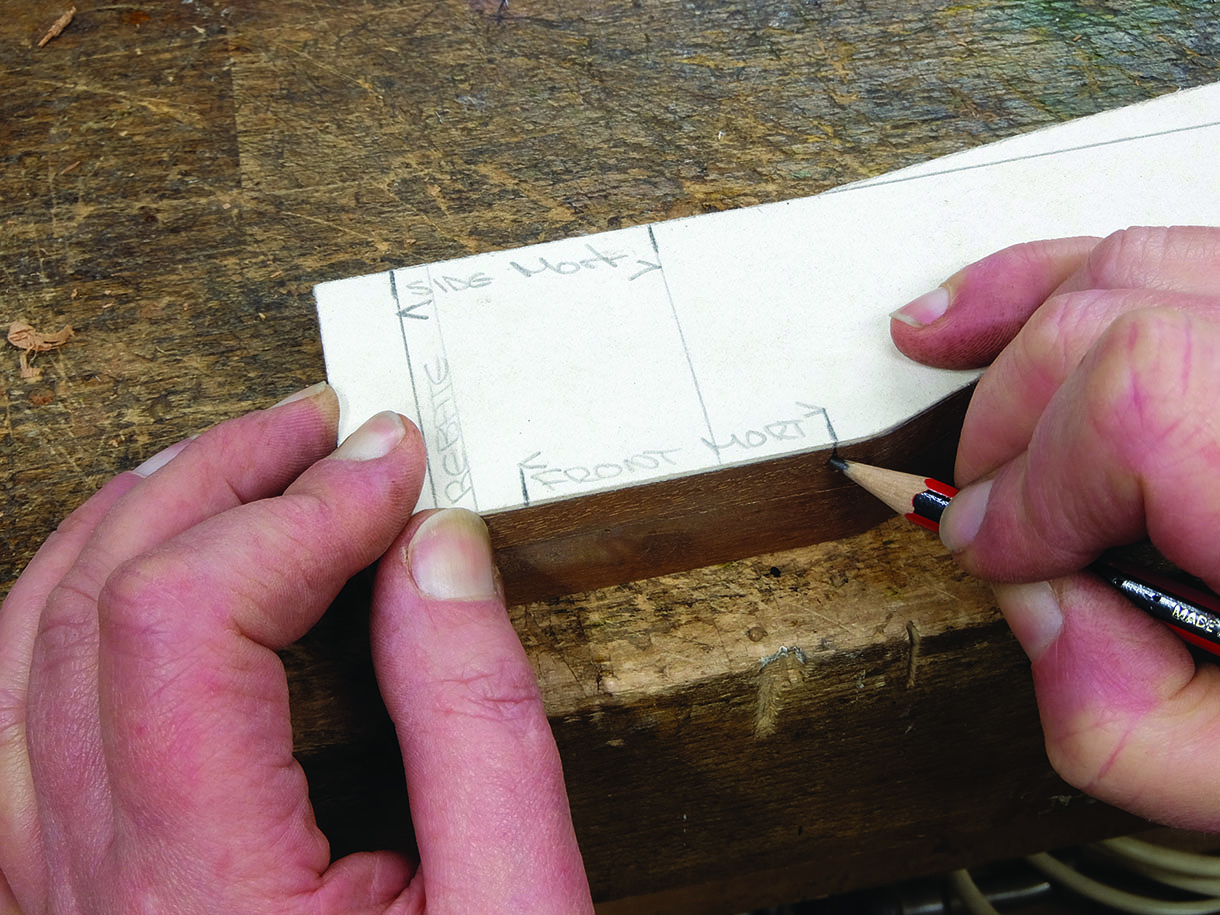 14. Next I cleaned up the front and back shapes with a spokeshave, checking the shape against the template and then marked the positions of the mortises 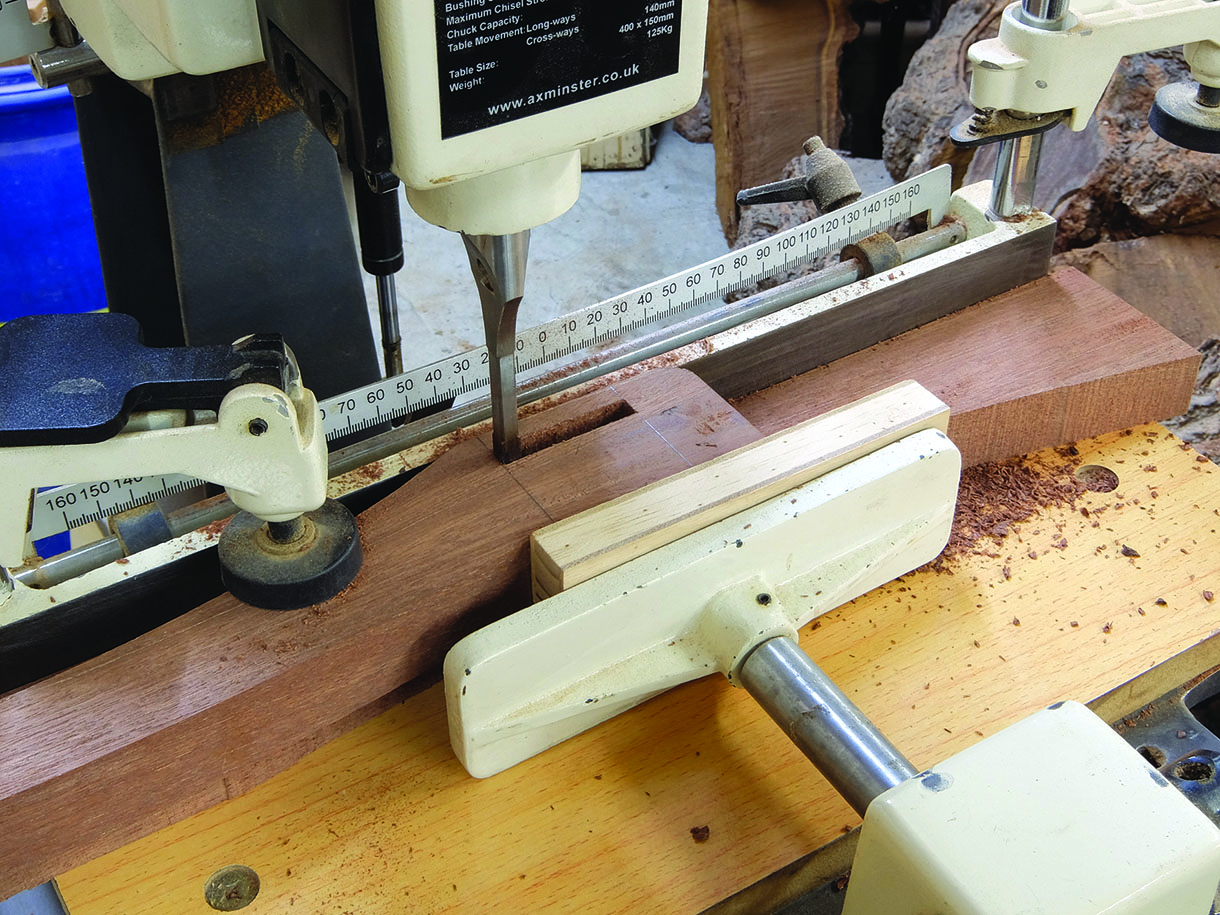 15.The mortises were cut out using a mortiser and a packing piece to clear the shape of the leg when clamping it in the mortiser, for cutting the front rail mortise. With the joints cut I did a dry test fit of the frame and then cleaned up the new leg using a cabinet scraper and abrasives. The front frame and remainder of the chair was glued, as in step 5. The rebate at the top of the leg was cut flush with the inside edge of the side rail and top of the front rail 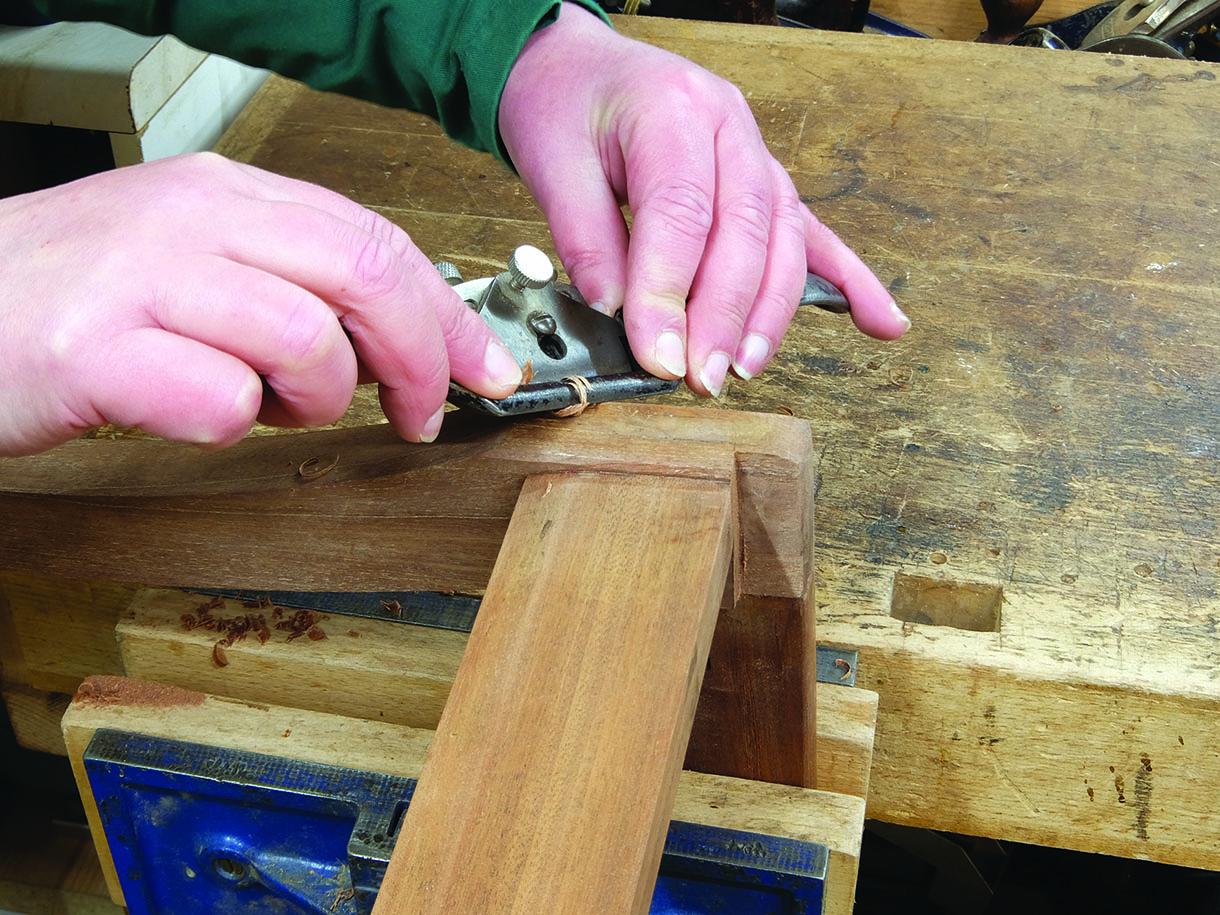 16. I used a flat bottomed spokeshave to finish shaping the top front of the leg 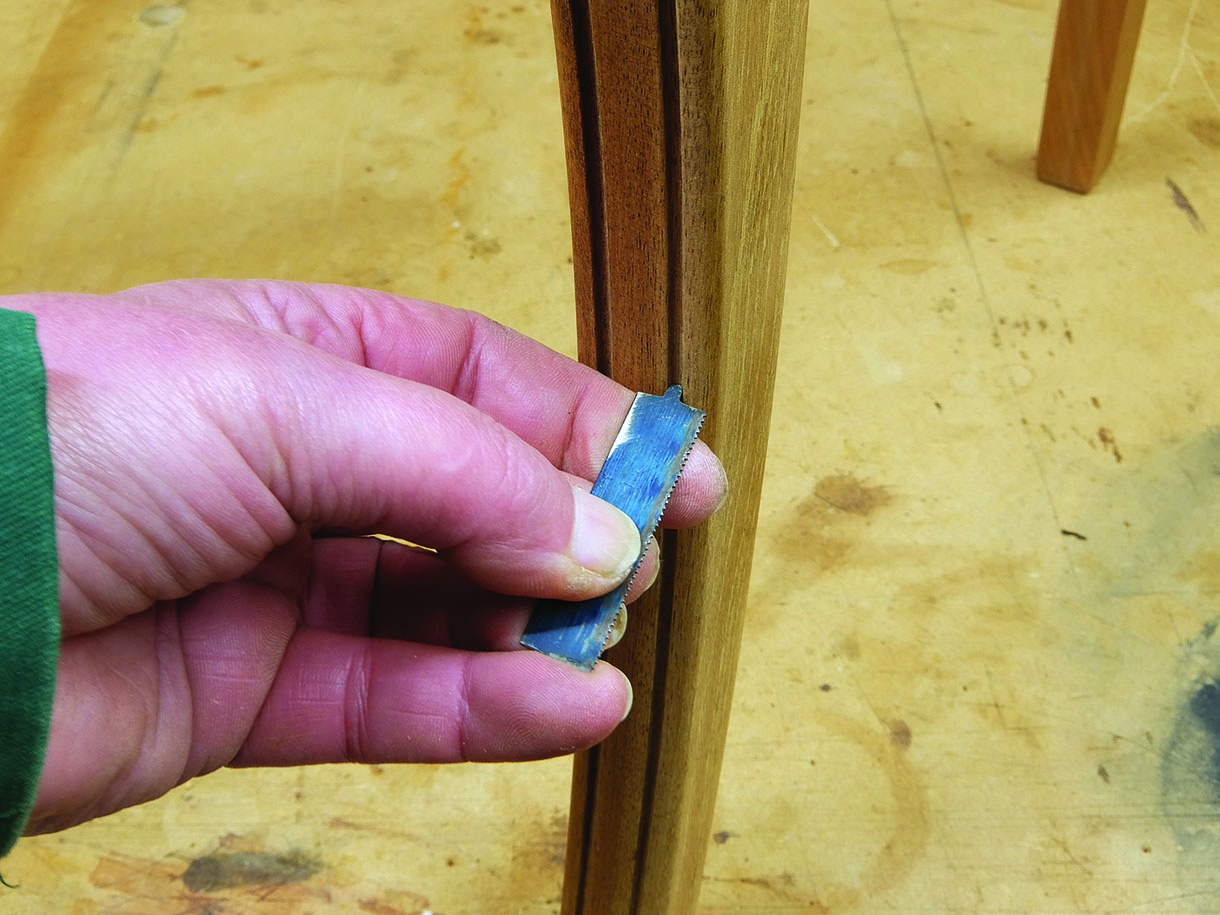 17. Using a piece of old hacksaw blade, I cut and filed it to the shape of the existing reed on the front leg of the chair 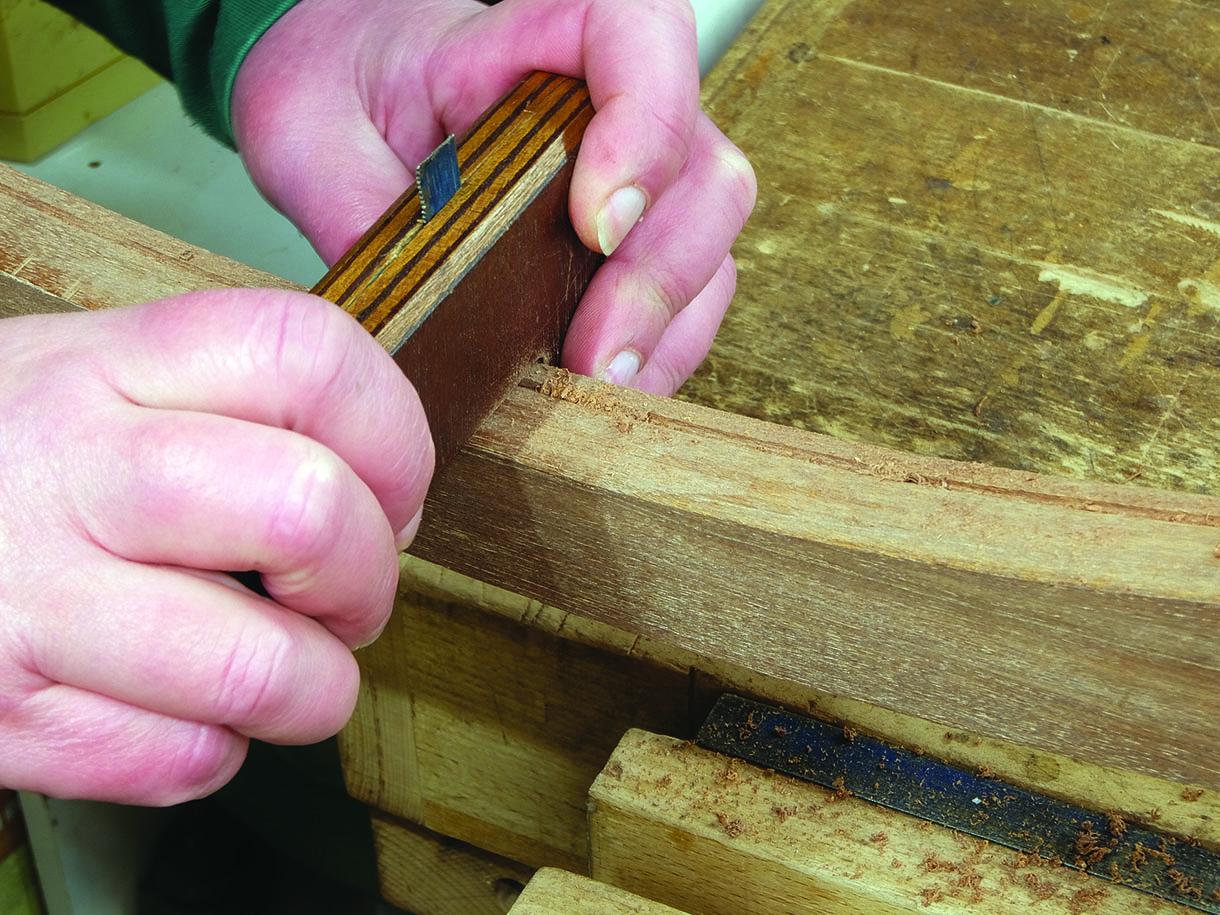 18.The cutter was fitted into a scratchstock then pulled along the two edges of the leg cutting the grain ‘downhill’ to support the wood fibres and prevent tearout. With the detail cut, the final shaping of the front edges could be carried out using a spokeshave 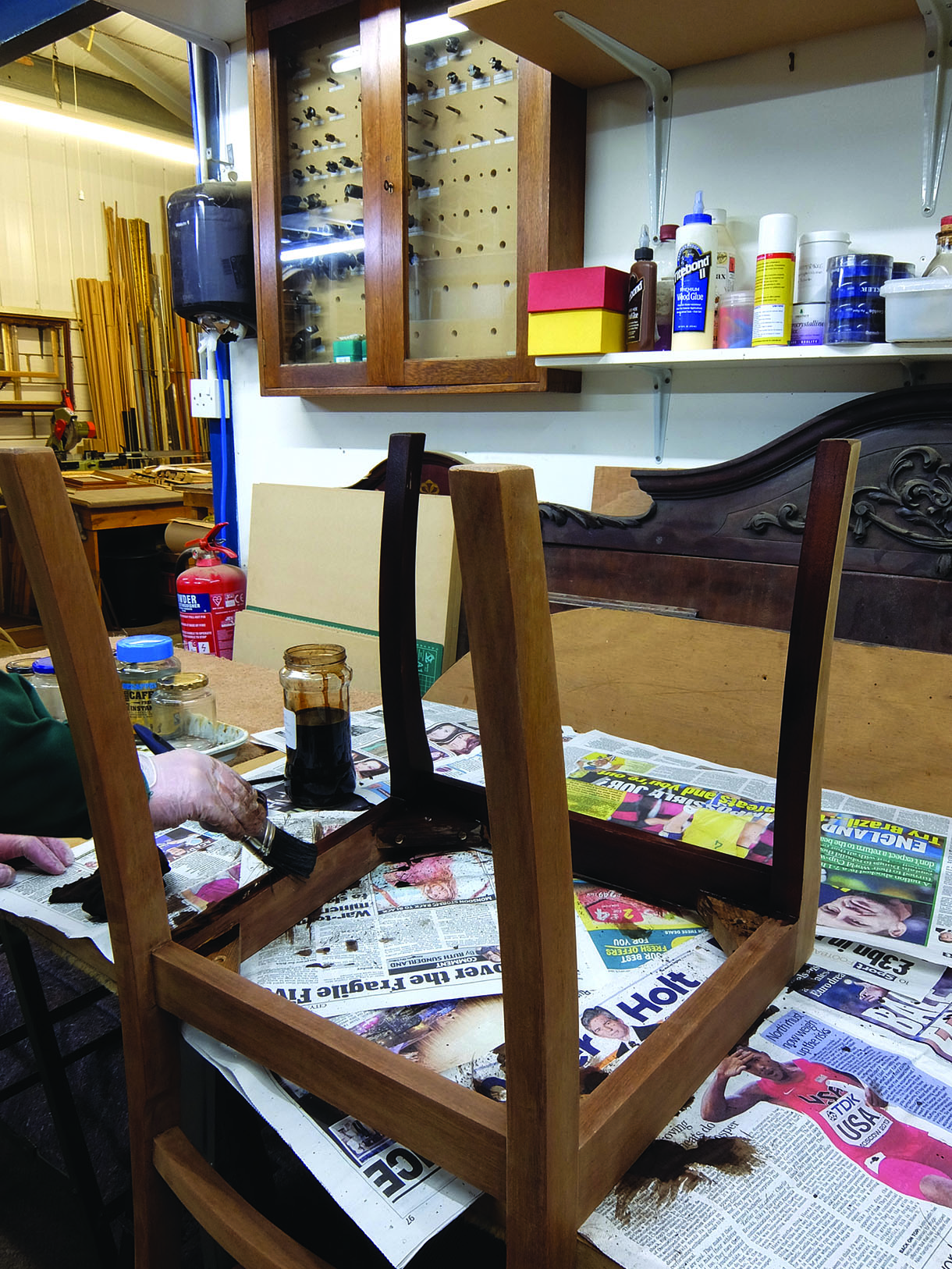 19. All the corner blocks were replaced, the screw threads lubricated with candle wax to prevent them being glued into the rails. After a final clean up the frames were stained. The grain was raised on the new leg with water and sanded before staining. I used Vandyke crystals dissolved in hot water as the colour can be adjusted by adding more water to weaken the stain or more crystals to strengthen it. It is applied with a brush to get in all the corners and after a few minutes the excess wiped off and allowed to dry 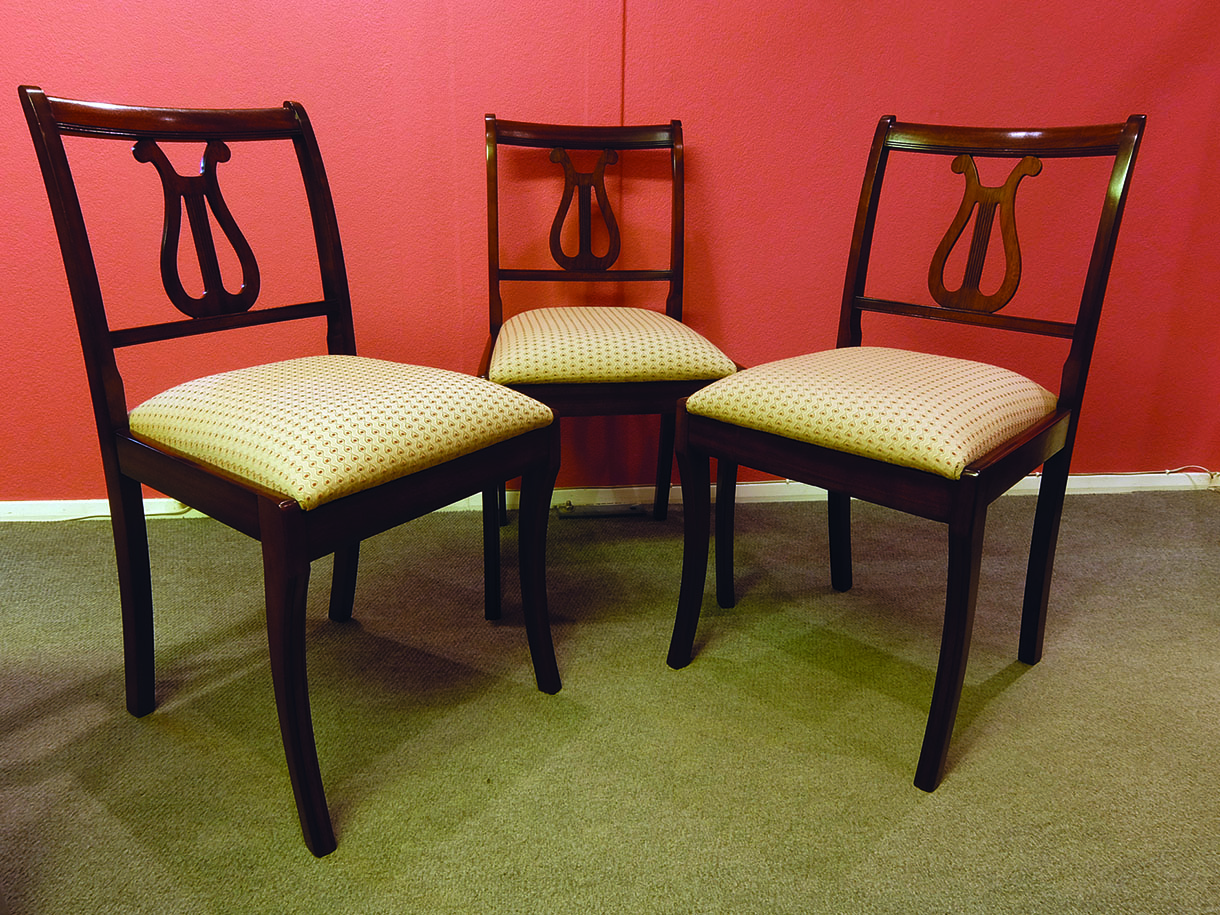 20. Sealing and French polishing used the same procedures as shown in my article in issue 4. It was important to get into corners but avoid any runs of French polish.  The chairs were rubbed back with wirewool grade ‘0000’ and waxed to cut the high shine to the polish on the table. The drop-in seats were re-upholstered by a colleague, with the new front leg matched in to the other chairs – left hand chair, front left leg. One very happy client as a result!