The quatrefoil is one of the mainstays of Medieval Gothic carvings, both in wood and stone. It is found everywhere in our churches and cathedrals throughout the medieval period and in the great Victorian Gothic revival. Its name, like so many stonemasonry terms, comes from our shared medieval heritage with Norman French masons – quatre meaning four and foil (feuille in modern French) meaning leaf. It is a stylised representation in stone of a four-leafed clover typically found in window tracery, in string courses, on fonts and ‘pierced through’ screens and walls. Versions with more or less leaves are also common – principally referred to as trefoils with three leaves or cinquefoils with five leaves.
A quatrefoil is a geometrical shape consisting of four small circles, inside a large circle, inside a square (see drawing on the next page). The small circles are ‘erased’ where they merge on the diagonals and are formed into pointed ‘cusps’. The triangular gaps between the small circles, the big circle and the corners of the square are called ‘eyes’ and are ‘incised’ with sloping sides. Flat and narrow ‘tracery’ bands, 6mm wide, are formed on the outer edge of the small and large circles and a ‘cove’, 13mm wide and deep, is formed inside each small circle. The surface of the inner part of the quatrefoil is carved flat, about 15mm below the top surface. To decorate the centre I have added a stylised four-pointed flower in Gothic style.
The tools and methods I have used in this project are much the same as a medieval mason would have used, not just for the sake of tradition, but because they are still used by modern masons. This is part of the timeless charm of stonecarving – following a path well trodden by many generations of our ancestors.

Carving stone safely
• Wear eye protection when you’re carving stone – flying stone chips are sharp!
• Stone is very heavy. A 300mm metric cube of stone will weigh around 70kg, so wear toe protector shoes/boots.
• Stonecarving creates a lot of dust, so work outdoors if possible.
• Wear a dust mask no matter where you are working and take particular care if you’re working with sandstone as silica dust can accumulate in the lungs.

Using the pattern
You can enlarge the pattern to any size that suits you depending on the size of stone you can obtain economically (see ‘buying your stone’ below). Just remember if you make it too small then it will be fiddly to carve. If the surface of the stone is dry and free of dust, you can usually trace the pattern onto it with carbon paper. If that doesn’t work then a quatrefoil can easily be drawn directly on the stone with a pencil and compass and some fairly simple geometry, as shown by the red lines in the drawing. 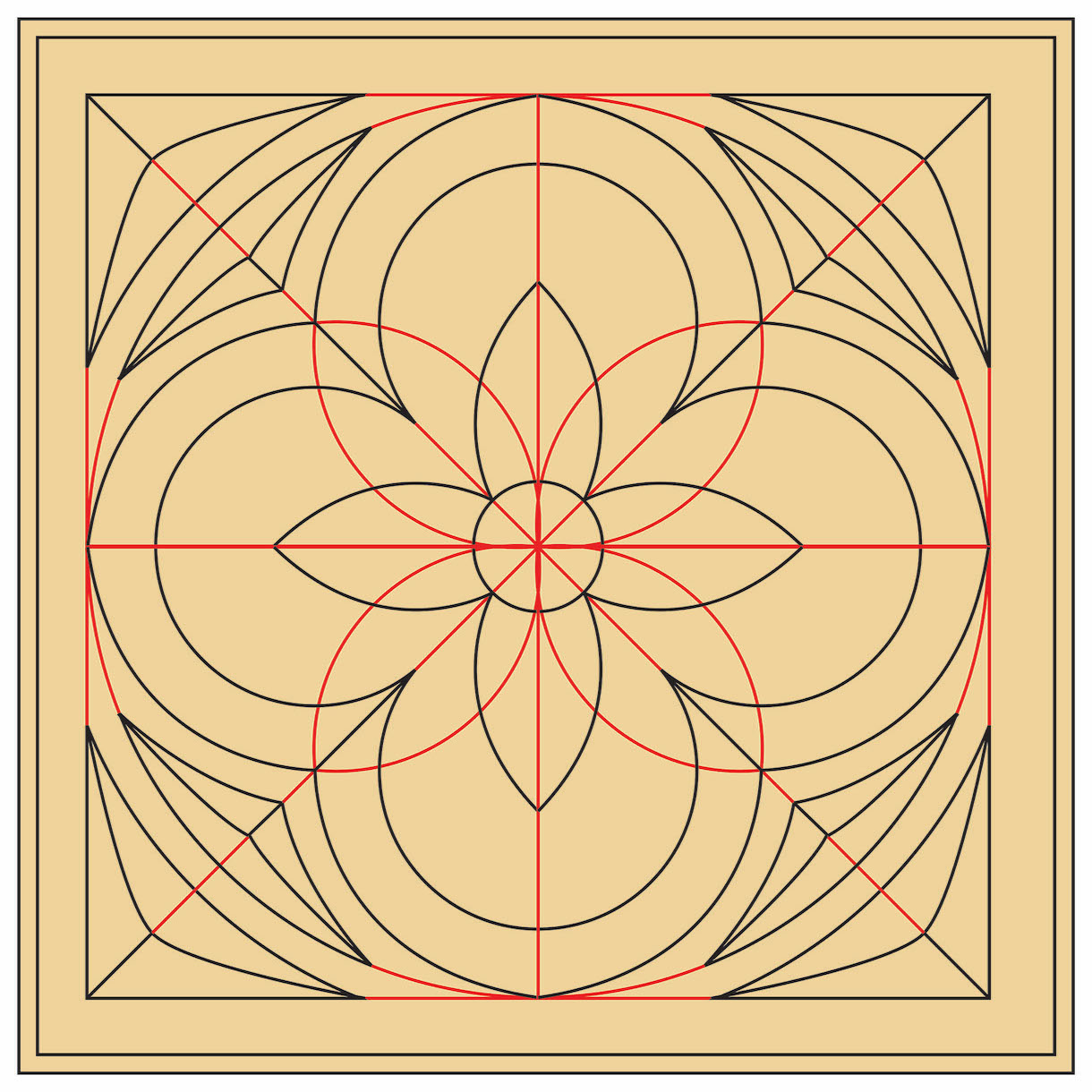 ‘Tooling up’ for stone carving
A stonecarver’s toolkit is very simple compared to a woodcarver’s. This is because the limestone and sandstone ‘freestones’ used for stonecarving have no grain and you can approach a cut from a wider range of angles. It just requires a few chisels and gouges to chisel away the stone from a particular place just a few millimetres at a time to create the shape you want.
Three flat chisels and three gouges in the sizes of 6mm, 13mm and 18mm will do most of what you ever need to do, and you’ll want a Mason’s dummy mallet to hit them with. For this project, an 18mm gouge will carve the cove in the quatrefoil and the three flat chisels will do the rest. A few other tools are useful for preparing and shaping a stone: a point tool, claw chisel, bolster, stone rasp, stone/concrete saw and a club hammer are all used in the heavier masonry work.
You can get bolsters and concrete saws from a good building tools supplier, but for stonecarving tools you need to go to a specialist in artists and sculptors’ supplies. 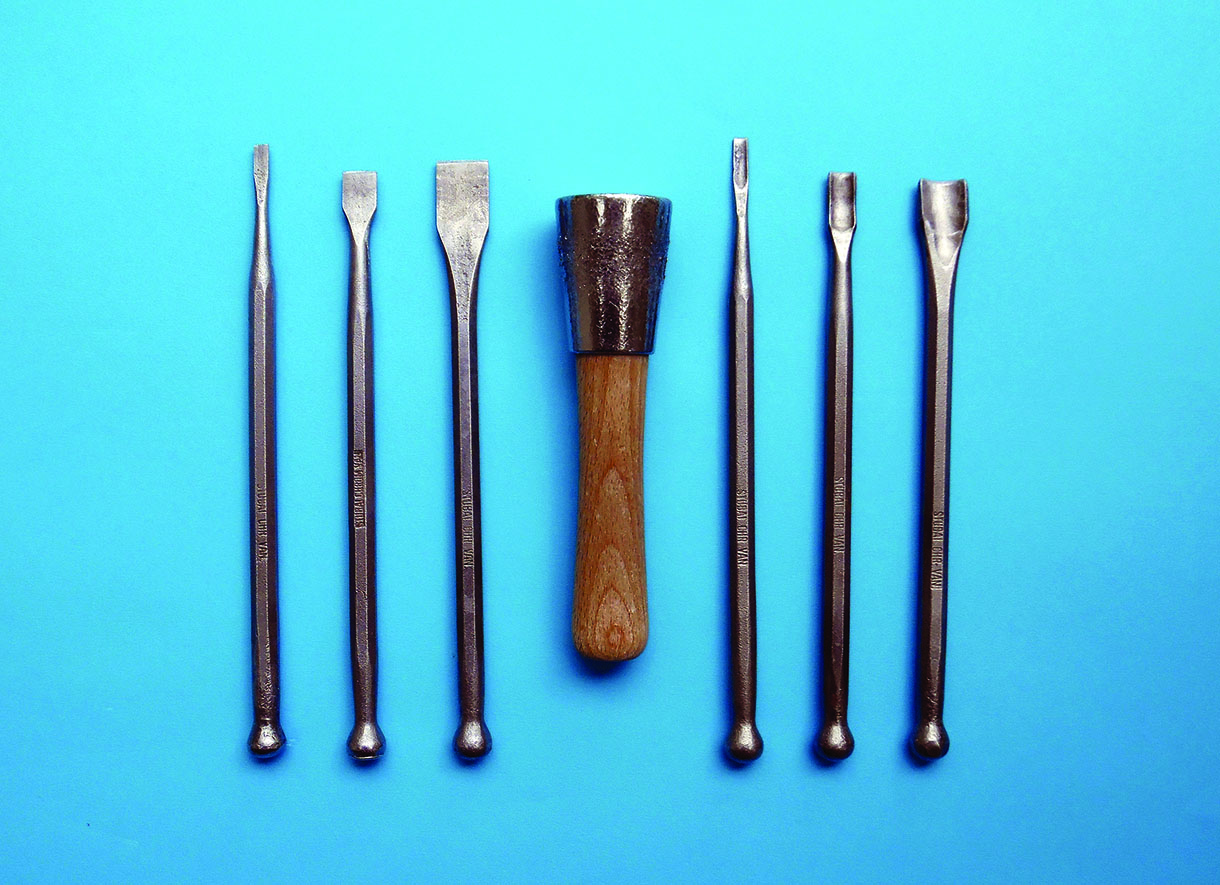 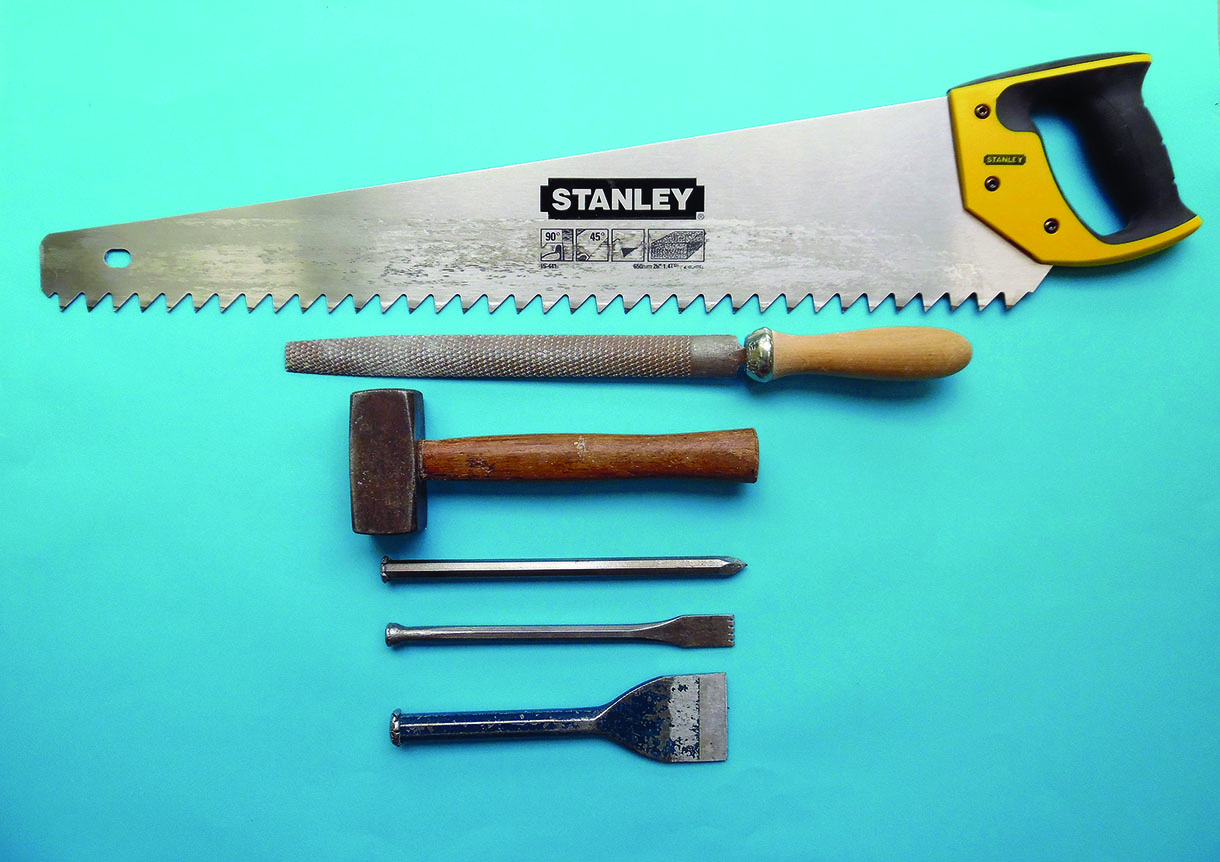 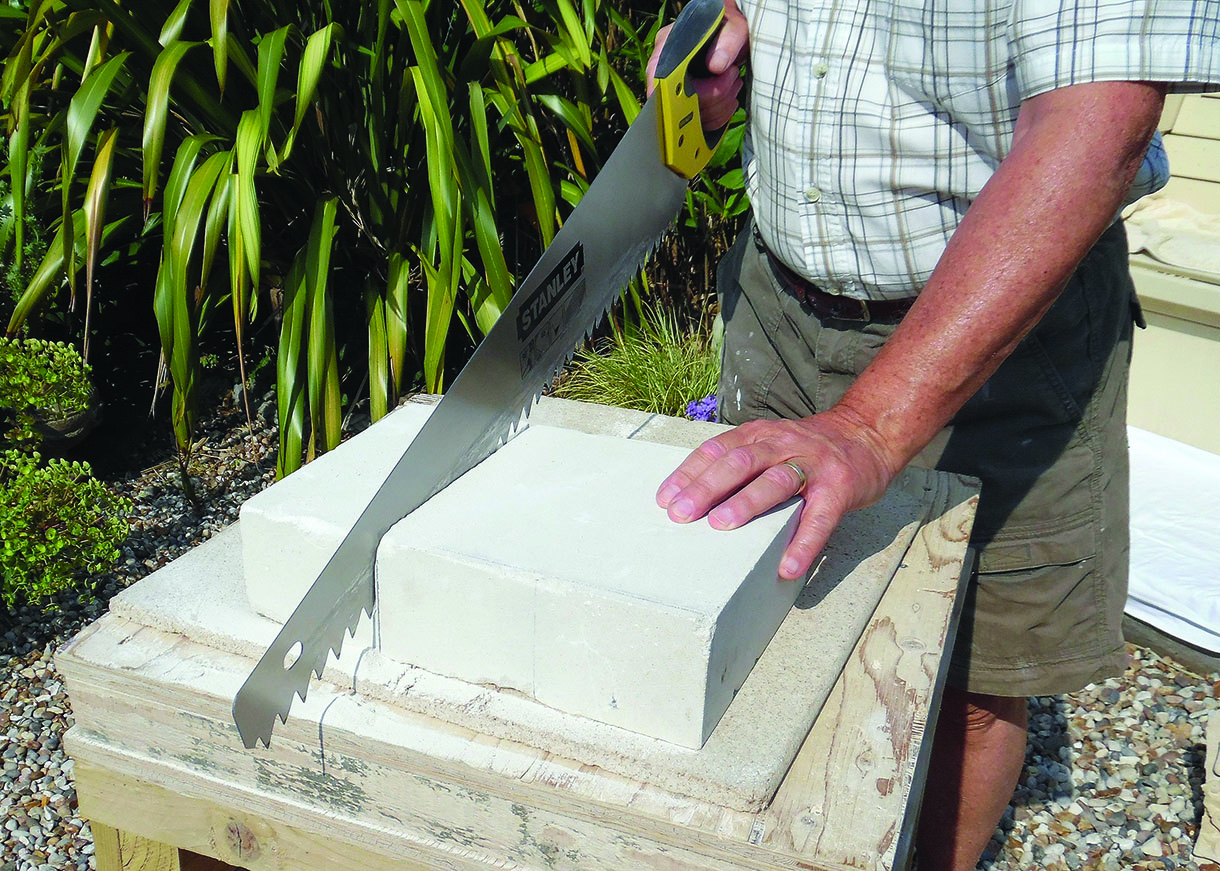 1. Ideally, get a block of limestone 200mm square or larger, and at least 50mm thick.   Getting stone cut to size can be expensive, but it could be cheaper to get a suitable offcut and square it up yourself. Using a stone/concrete saw will cut through medium-soft limestone, like the Portland stone I used 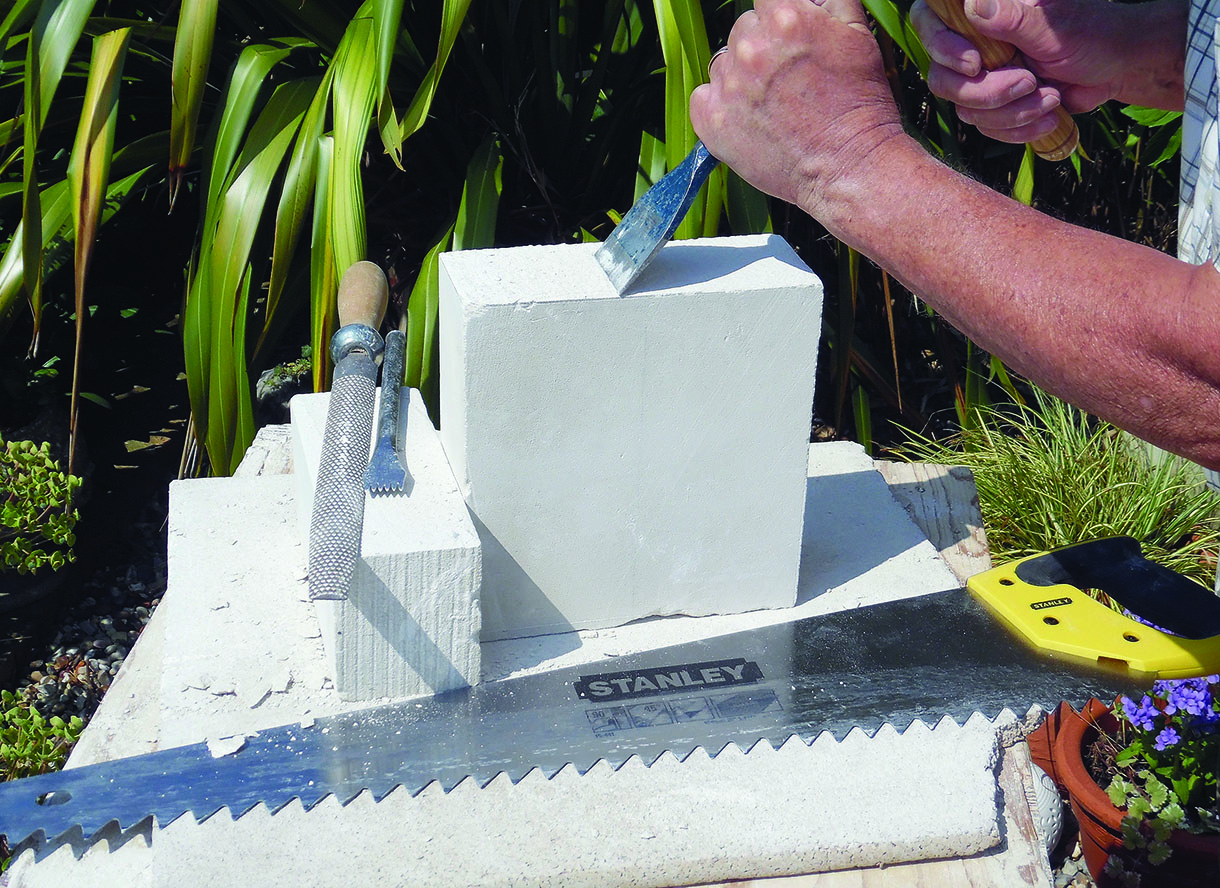 2. Refine the side of the square and remove the chipped and damaged edges you often find on offcuts by chiselling them down a few millimetres, with a claw chisel and bolster. Work the surface flat and smooth with a stone rasp. Work outdoors, if possible, as stone creates a lot of dust 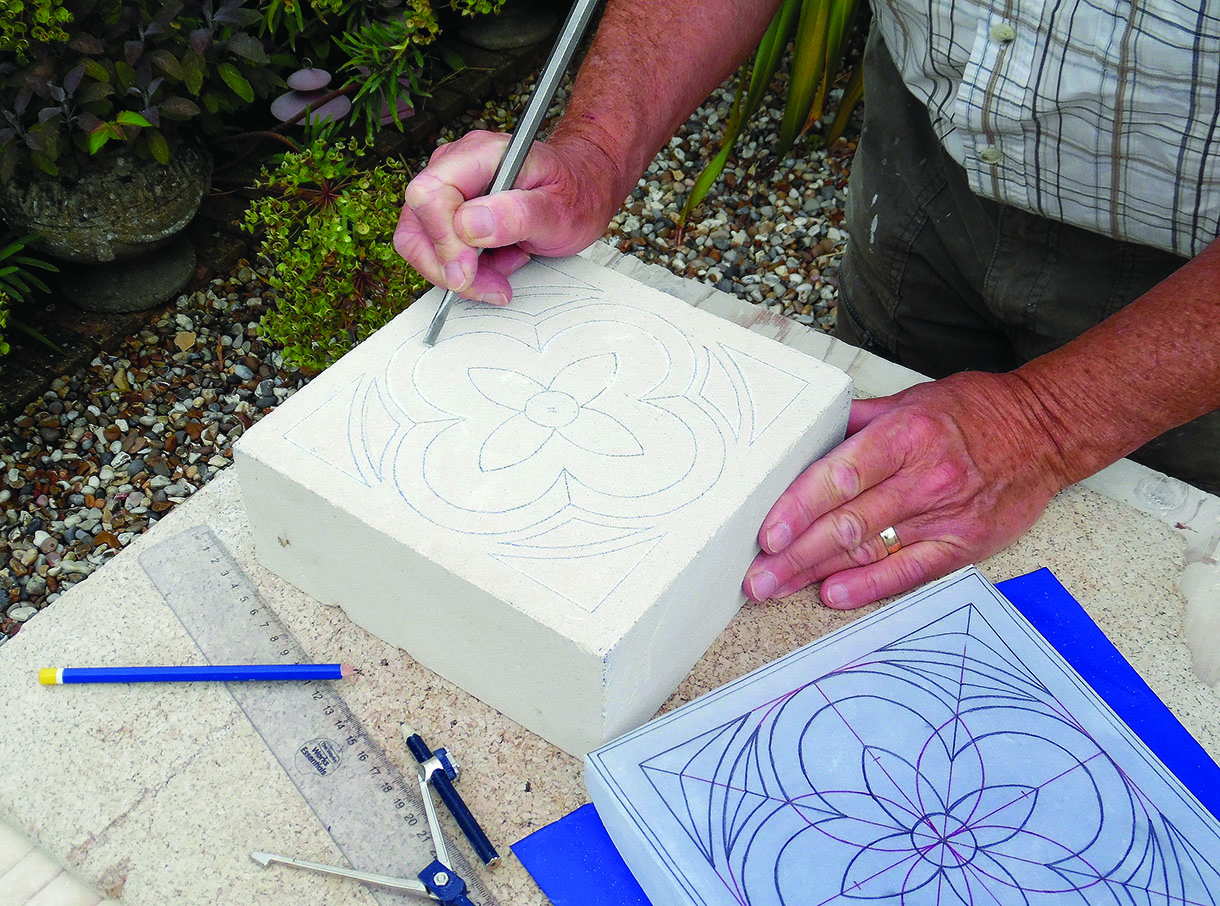 3. Make a full-size copy of the drawing to fit your stone. If the surface is clean and dry, trace the pattern onto the stone using carbon paper. If that doesn’t work, draw the pattern directly on to the block as described in ‘using the pattern’. Scribe over the lines with the point of a chisel or they may disappear while you are working 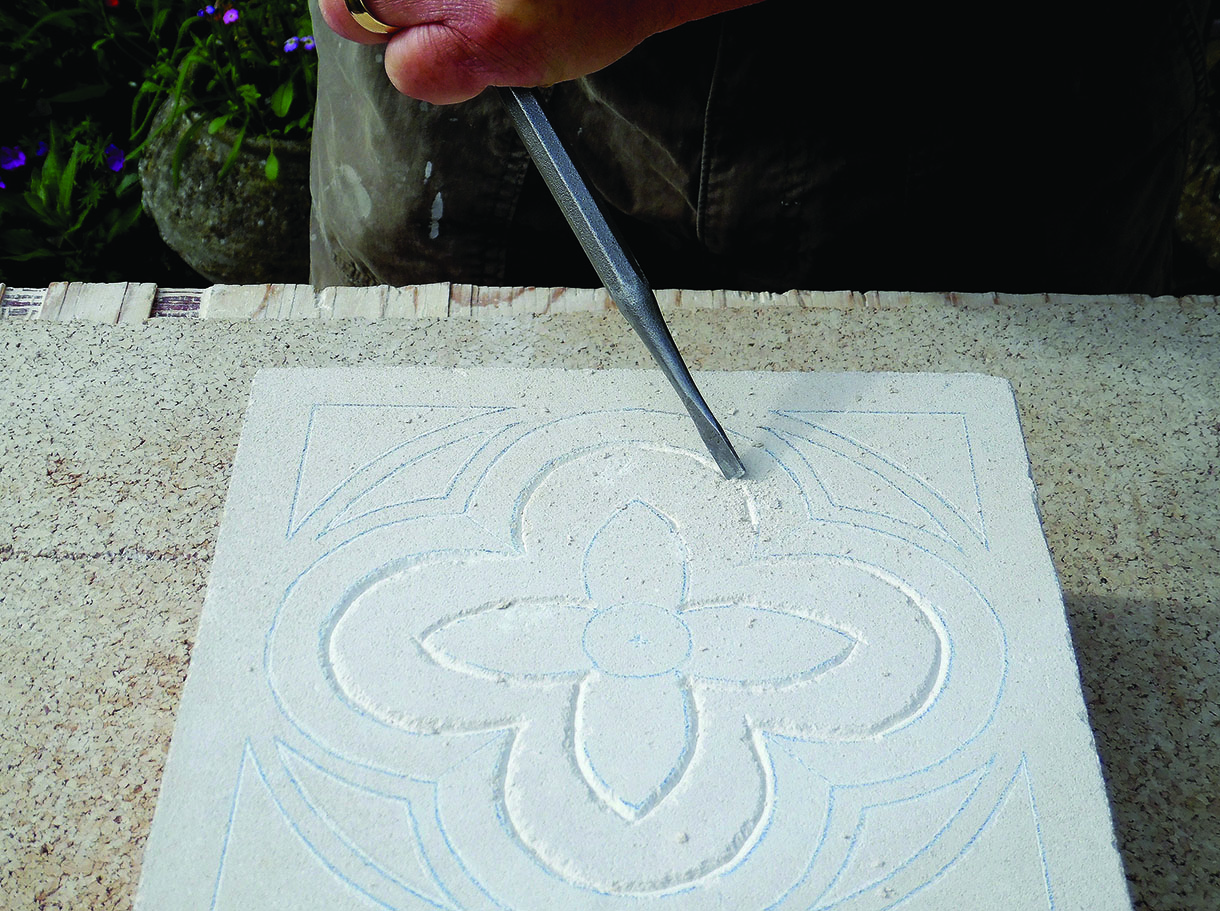 4. Chisel out the stone between the quatrefoil and the central flower. Go round the inside of the pattern and gently tap along one of the points of the cutting edge on a 6mm chisel. Hold the chisel at an angle of 45° and aim to produce grains and dust – not chunks 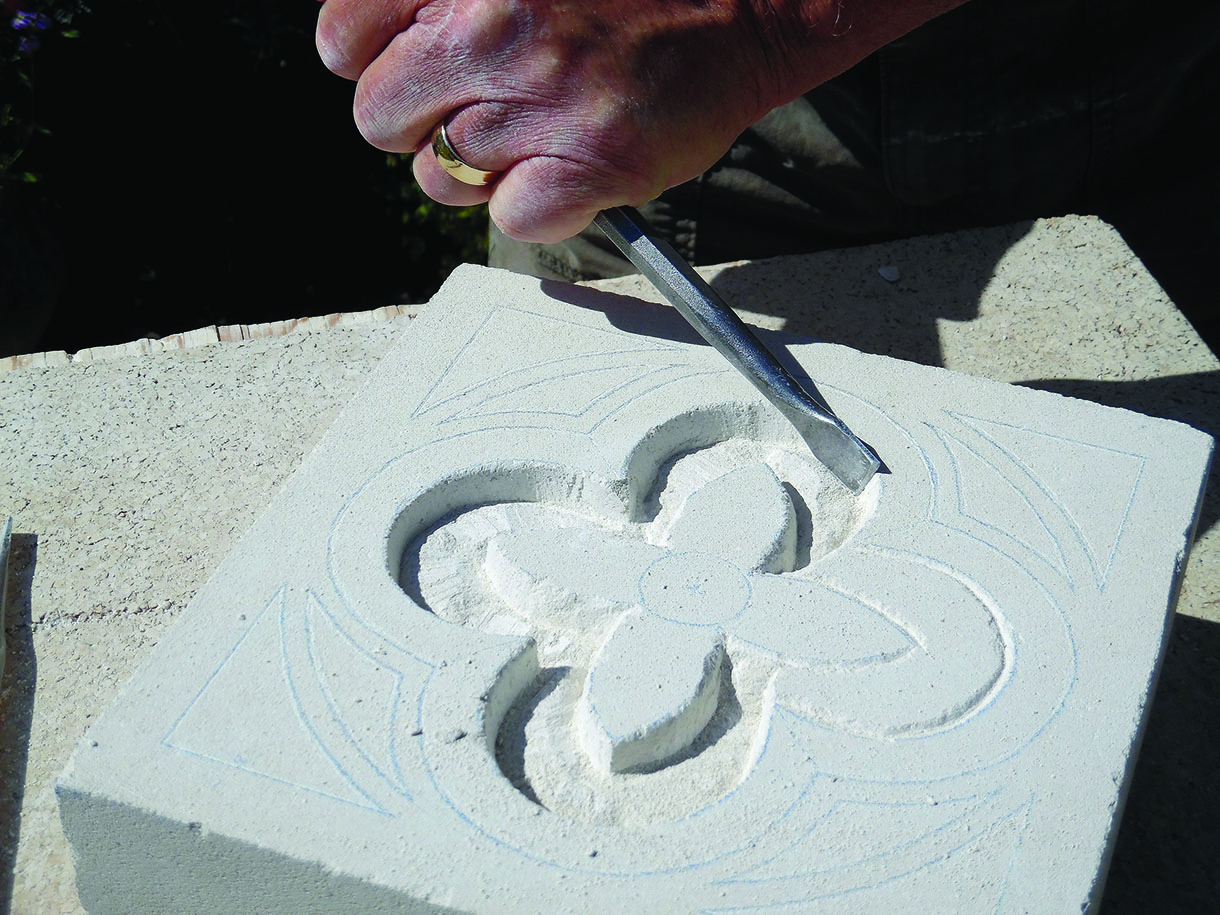 5. Cut gradually deeper and switch to a 13mm chisel. Gradually make the edge vertical, up to the pattern line. As you work down always cut inwards at a point, like the cusps and flower tips, as outward cuts may break off at the tip 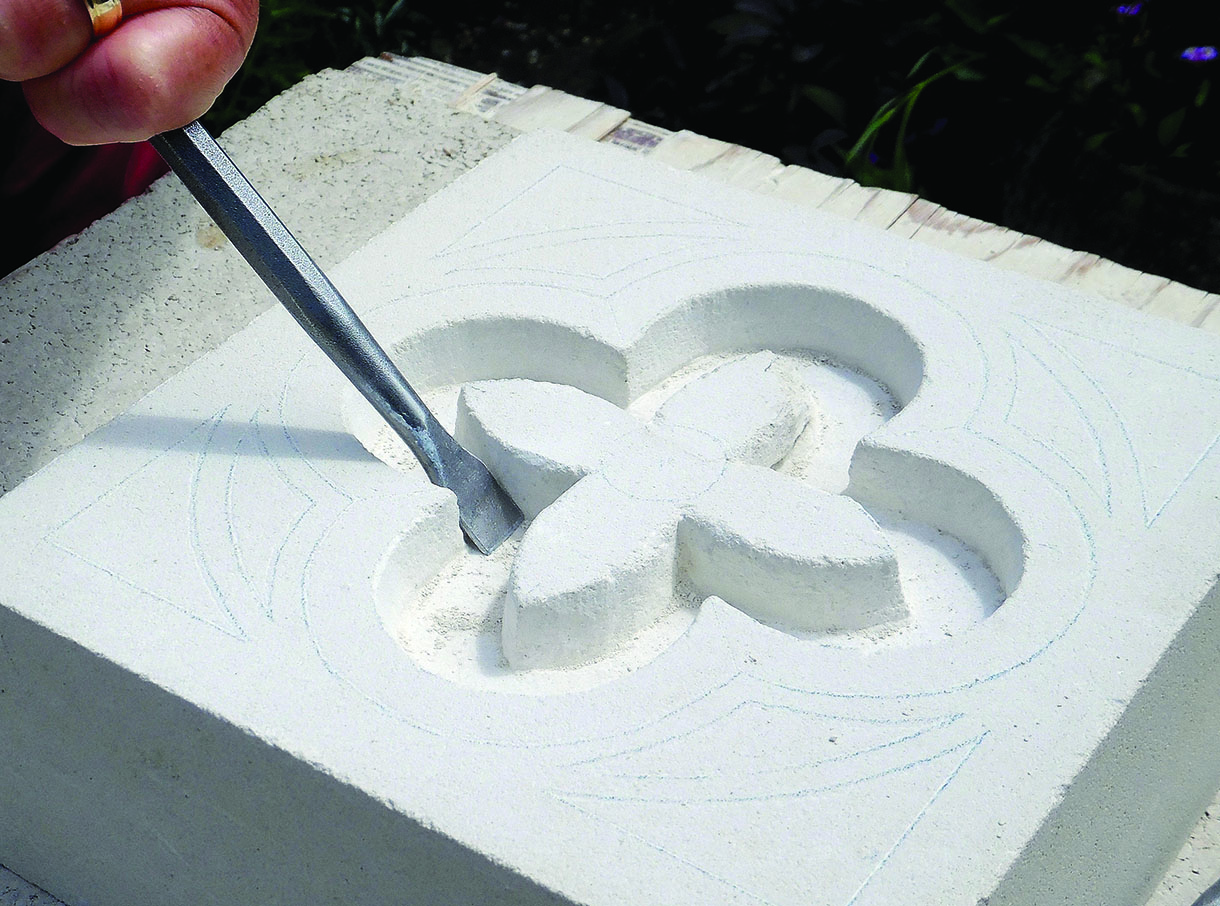 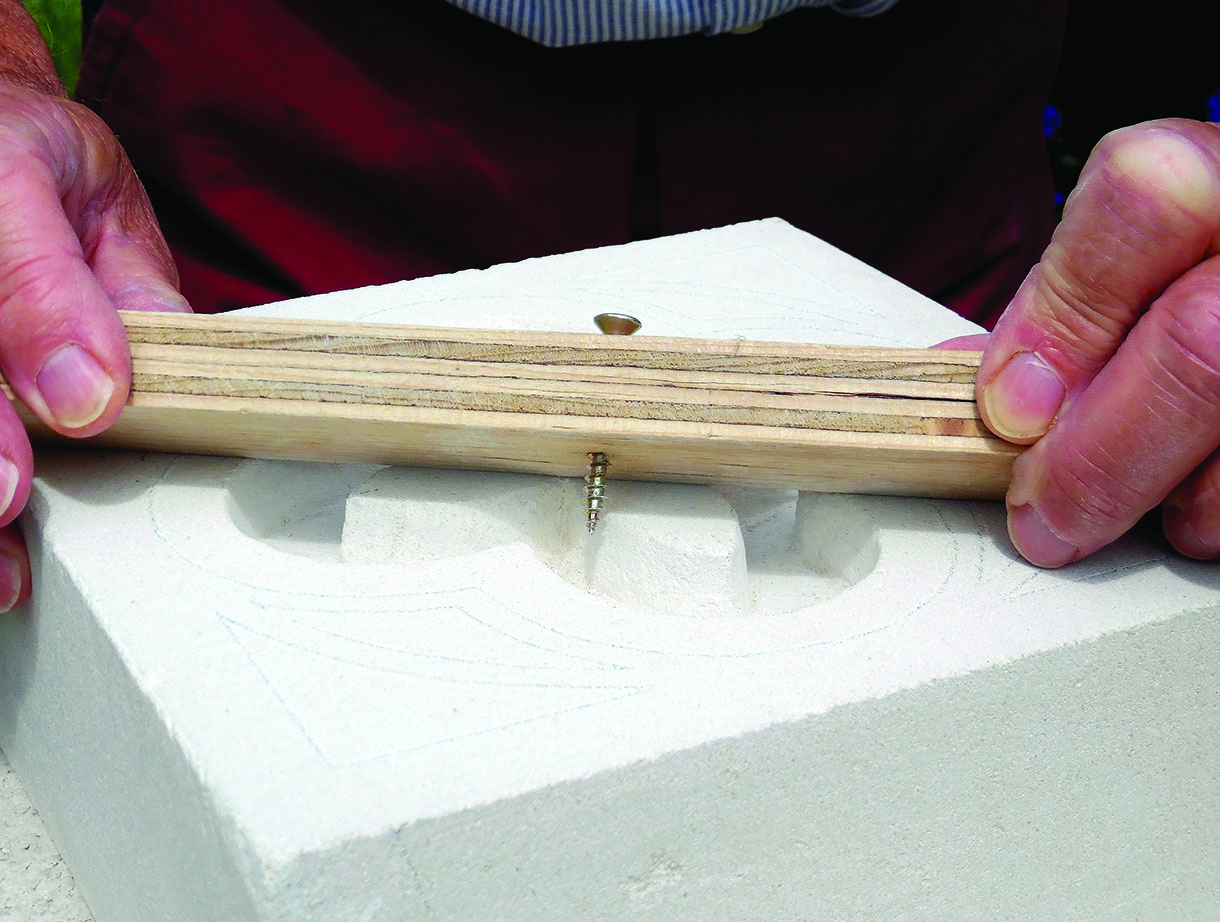 7. To check the depth is even all over, insert a screw through a flat piece of wood to make a depth gauge with the tip protruding 15mm. Move it around over the ‘floor’ and it will scratch the parts that are less than 15mm 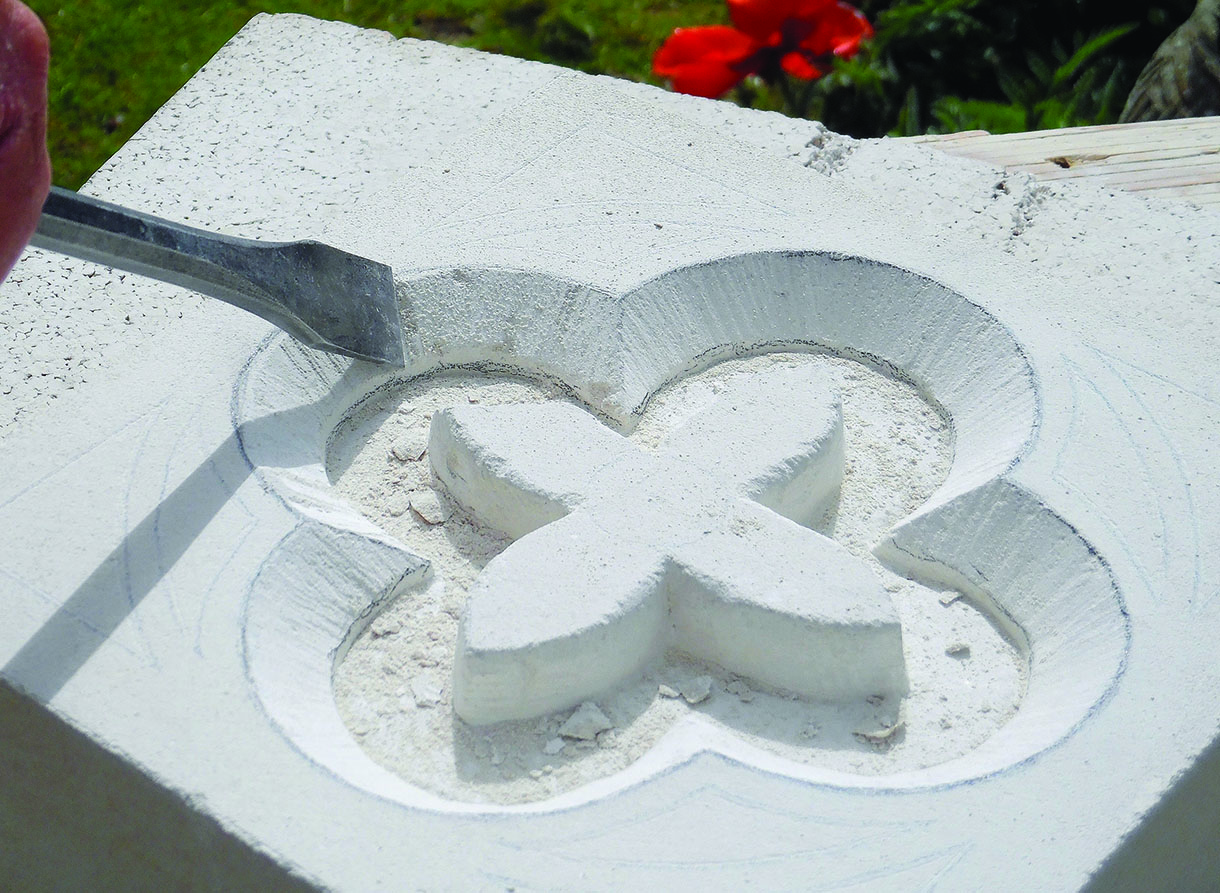 8. Draw a line 13mm down from the face where the cove of the quatrefoil will come down to. Chisel between the upper and lower pattern lines with an 18mm chisel

Buying your stone
The best place to look for good quality carving stone is at the yard of an architectural stonemason. Look on the internet for your nearest supplier. Getting stone cut to size can be expensive, so it is generally best to make your project fit the stone available. See what offcuts the stonemason can offer you at discount prices and choose the nearest fit. You can trim it to a perfect square using a stone saw, a bolster or a stone rasp. You can also get rough rocks very cheaply from garden centres and work these to shape, but they tend to be a bit smaller. 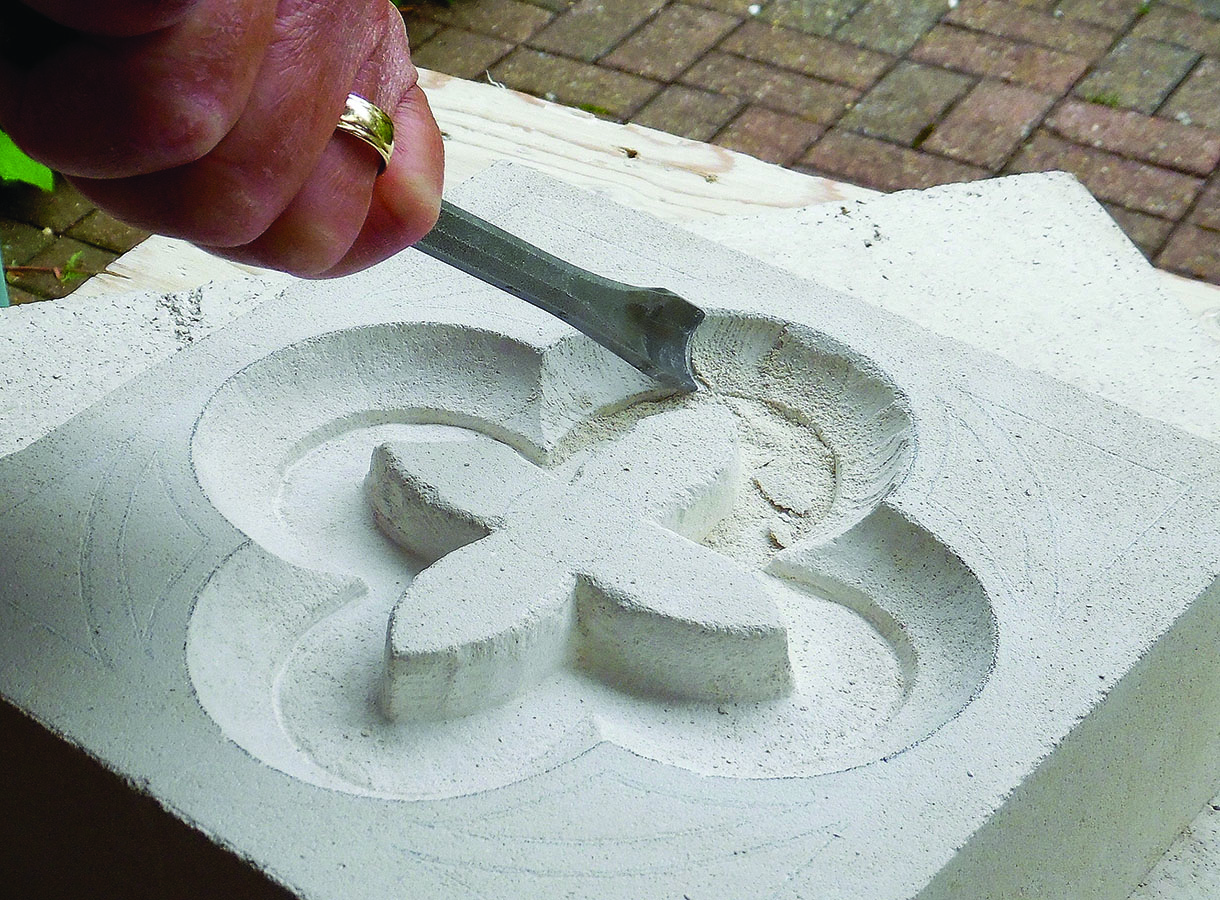 9. Form the concave surface of the ‘cove’ in the tracery with an 18mm gouge. Create sharp edges at the cusps, always carving inwards, and bring the sides of the cove up to the tracing lines on the surface and depth line you have drawn. Make sure the curve is smooth because any kinks will be noticeable 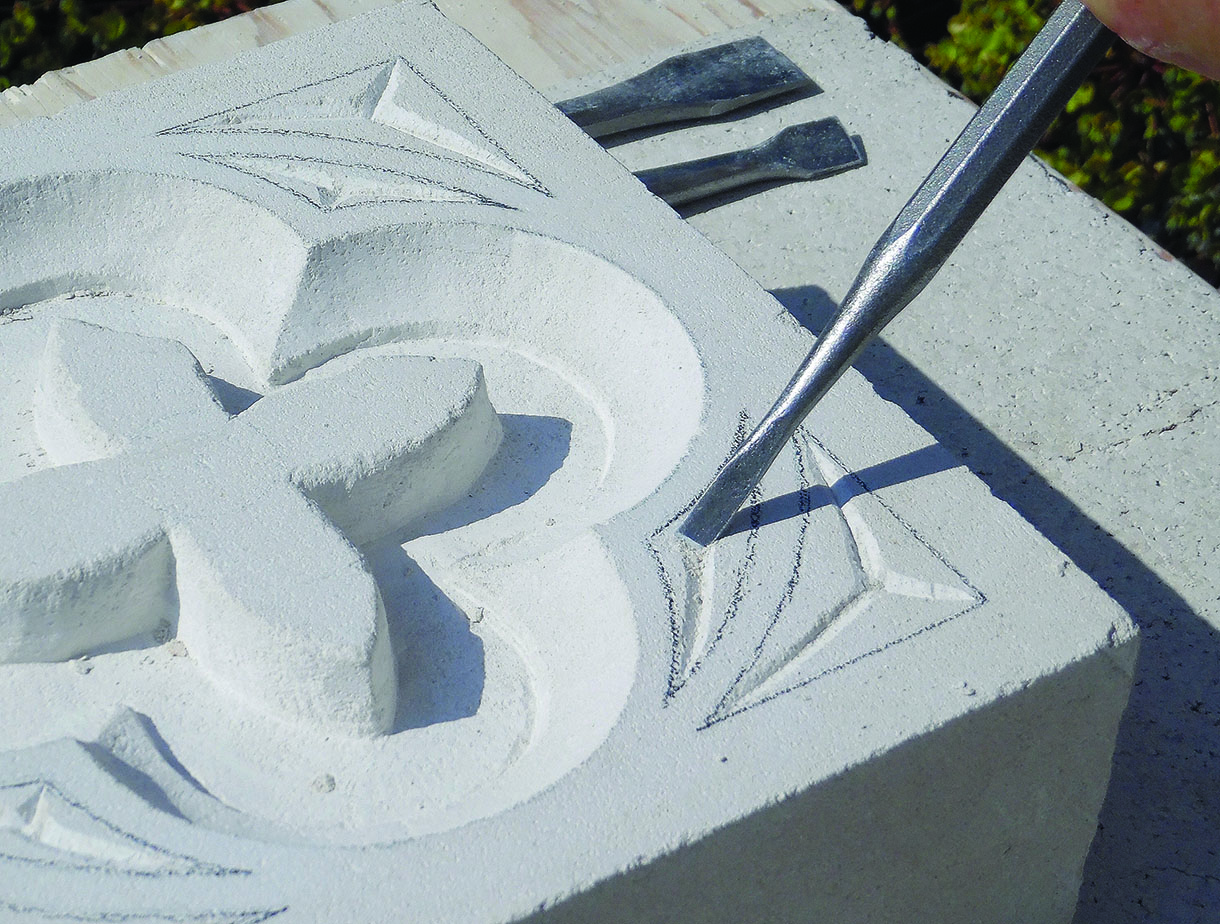 10. The ‘eyes’ are incised into the tracery spandrels between the big circle, the square and foils. Start by cutting a ‘V’ midway between the pattern lines 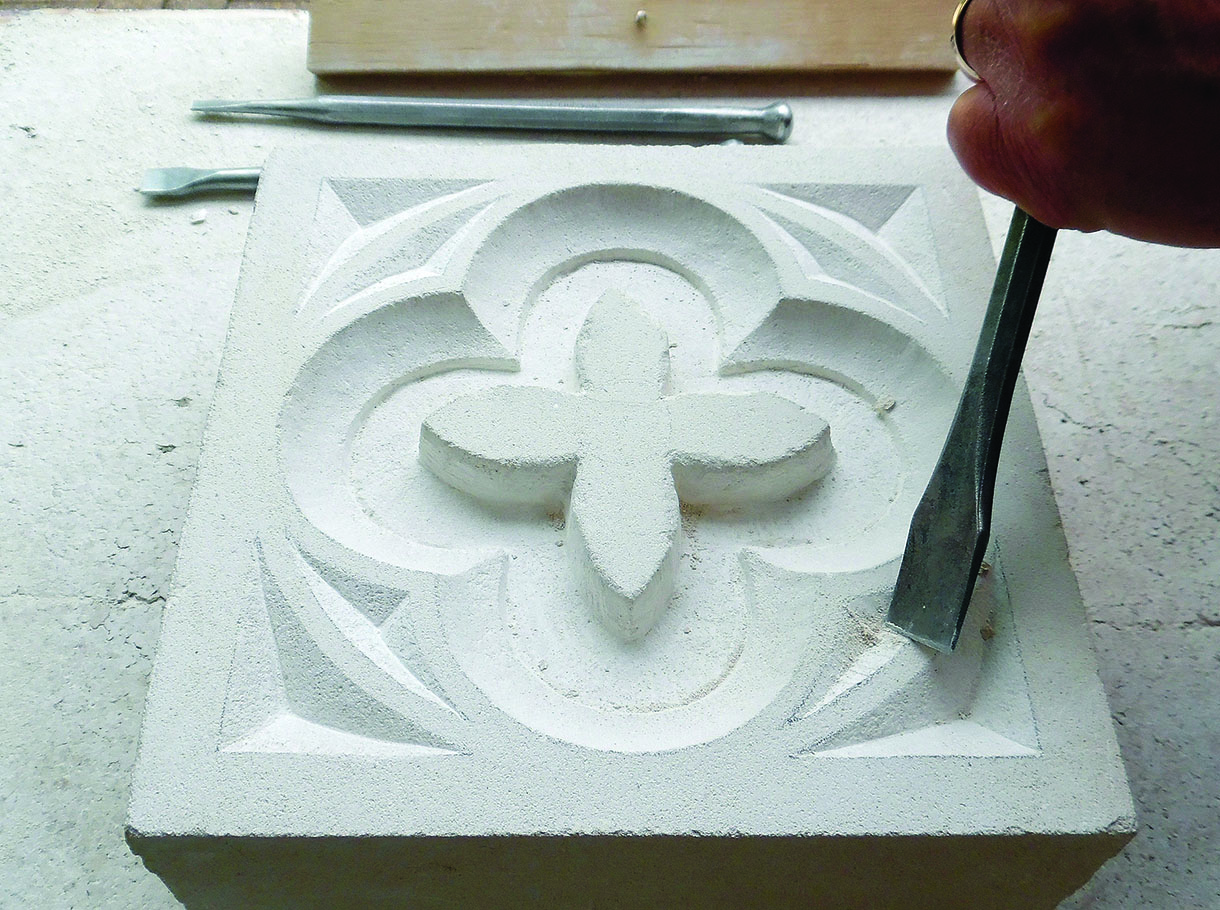 11. Gradually cut the ‘V’ deeper and wider, maintaing a slope of about 30°, while following the curves and straight lines. Cut neat mitres into the angles and follow the patterns closely 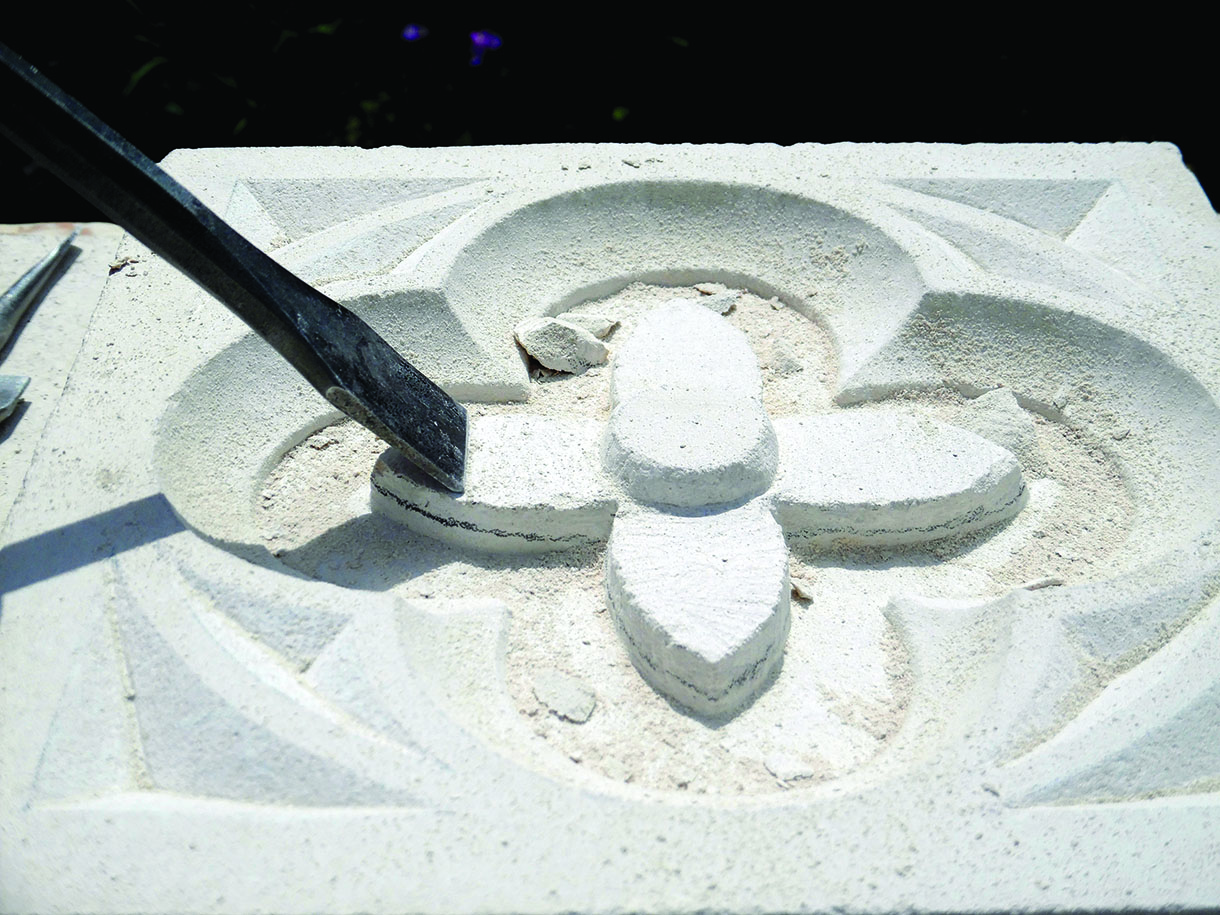 12. The flower is a simple low relief four-petal pattern. Cut round the centre circle and reduce the level of the petals, down to about 6mm below the top surface. Draw a baseline around the sides about 2mm above the ‘floor’. Remember to cut inwards from the tips 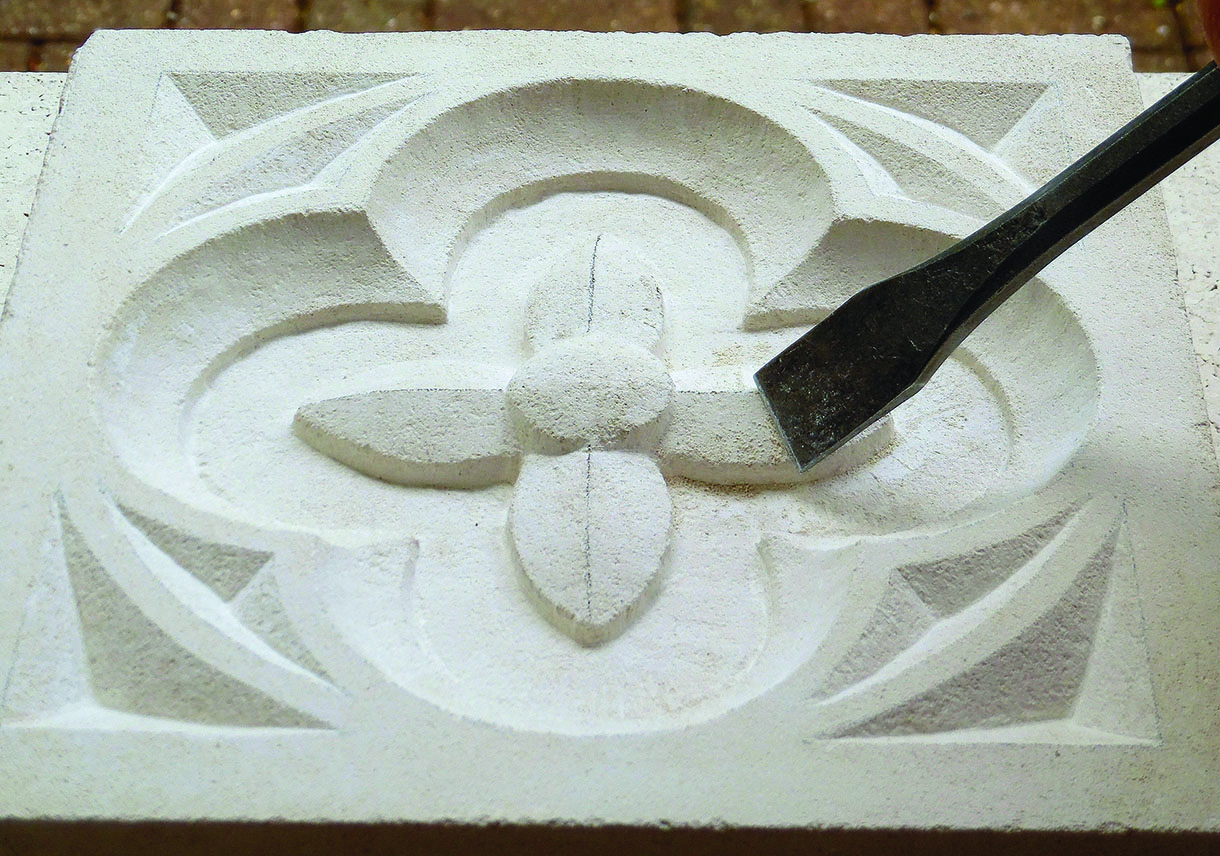 13. Use an 18mm chisel to slope each petal from its centreline down to the baseline. Round over the central circle into a dome and cut it neatly into the petals. Tidy up the edges of the petals and finish the flower neatly 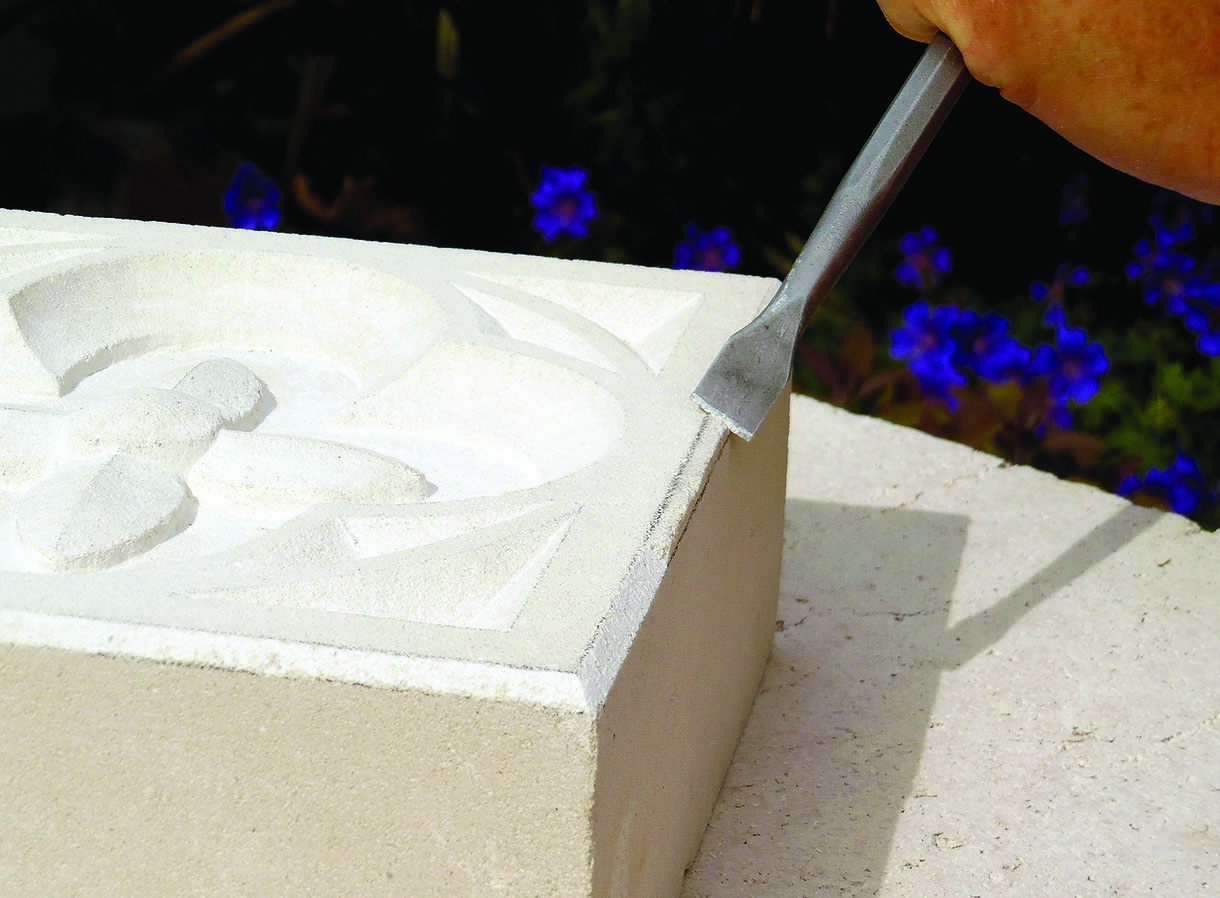 14. Smooth off all the chiselled surfaces of the foils, eyes and flower by pushing the chisels and gouge along the surface like a plane to level out the tool marks. Finally, draw lines around the block 3mm in and down from the outer edge and carve a 45° chamfer to create a neat finish to the whole job 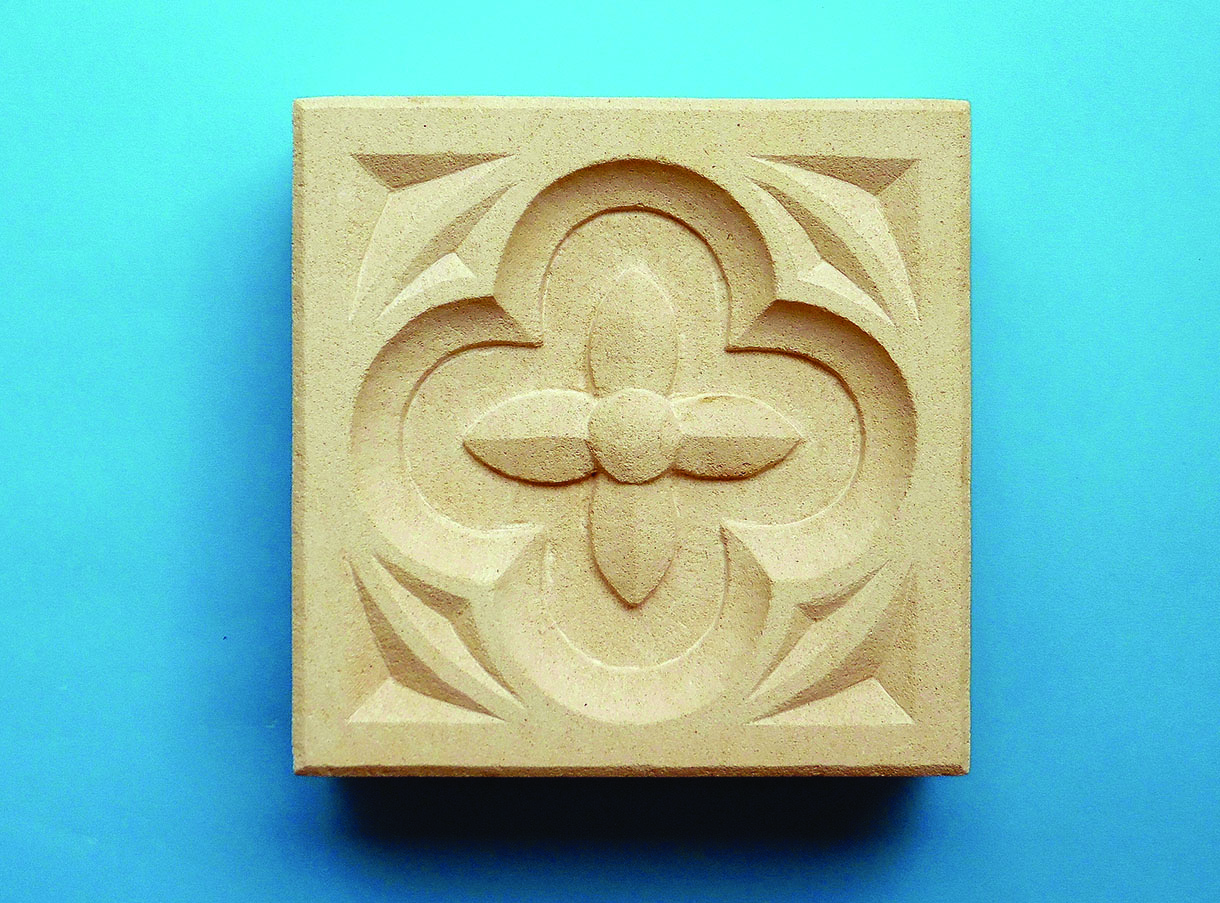 15. Wash off all the dust with a hose and tidy up any uneven carving. Your quatrefoil is ready to give a touch of Gothic dignity to your home or garden

Top tips:
1. There is no ‘give’ in stone, so the edges of a block will crumble if they are laying on chips of stone on a hard surface. Use a ‘softener’, such as a cork mat, on the bench so the chips will press into the mat instead of the stone.
2. If you accidentally break off a piece of stone that is vital to the pattern, you can usually glue it back in place with PVA adhesive. Make sure the joint is dry and free of dust and it should stick firmly. You can fill gaps by mixing a paste of stone dust and PVA adhesive.
3. Be careful with some adhesives as they can stain the stone.