Wedding Postbox:
John Doonan invites us to celebrate with a postal vision in pink

When our daughter told us she was getting married, my wife and I imagined a simple wedding: a ceremony followed by a good knees-up. It transpires that weddings have moved on and involve a list of workshop projects. The happy couple asked for a small postbox into which guests could place cards and small gifts. Could the father-of-the-bride deliver the goods? You bet!
After some head-scratching, I turned to ‘bendy’ MDF for the body of the box. Two discs of MDF, one at the top and another at the bottom, would provide the internal formers needed to maintain a perfectly round shape.  I wanted the top to have a sloping appearance, so would create this by layering three discs of increasing diameters. I settled for a simple base, of the same diameter as the lowest of the three discs at the top.
The valuable contents of the box needed to be secure, but it would have to be opened to remove the booty. I designed a removable panel in the base, which would be screwed in place. Knowing that the circumference of the body would be 1220mm (due to the size of the bendy MDF sheet available), and with thanks to my old maths teacher, I calculated the diameter of the body as 388mm. I then decided on the sizes of the top and base discs accordingly. The diameter of the internal formers would be the internal diameter of the body, 376mm (388mm less two thicknesses of 6mm). Thus the design was finalised. 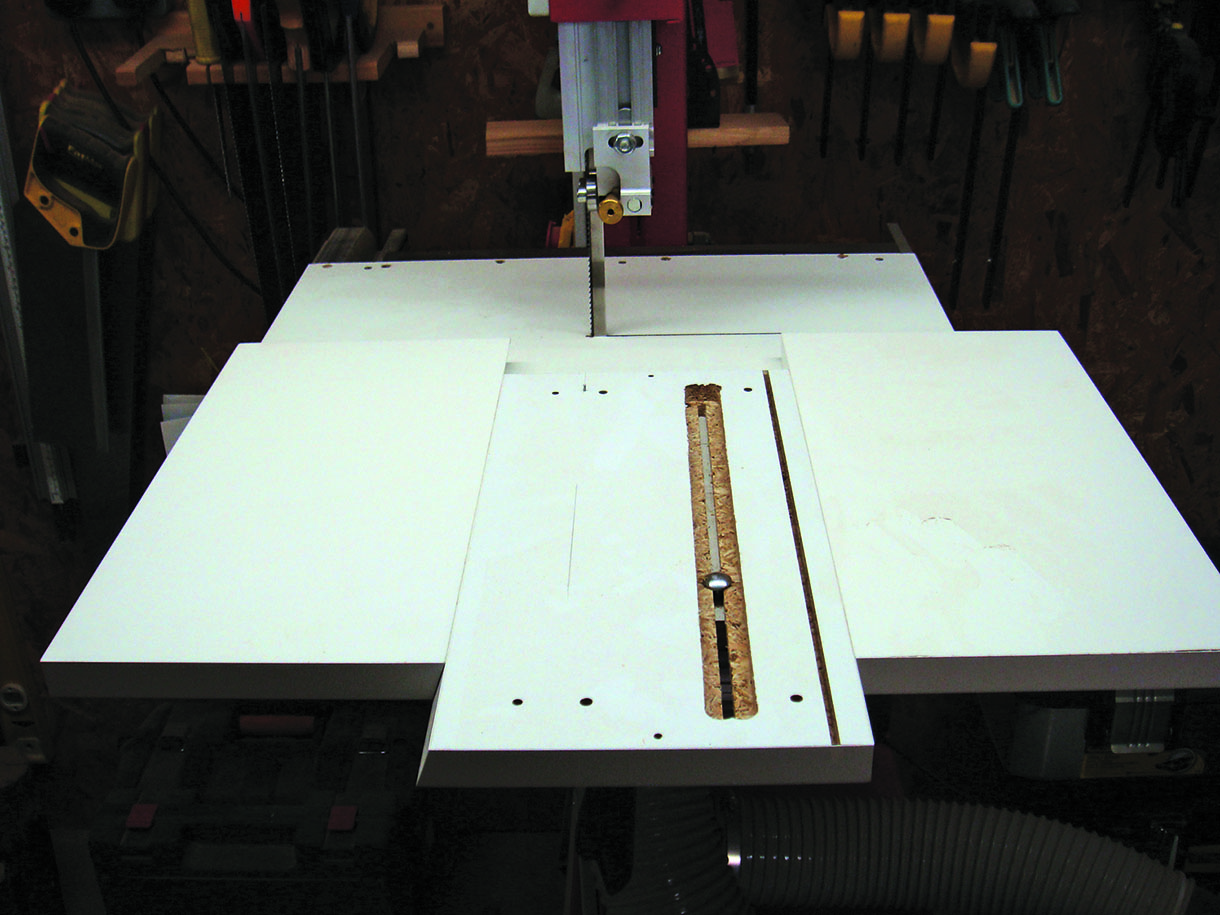 1. The initial cutting was carried out on a vertical panel saw at my local DIY superstore. I then cut the various discs of MDF on a bandsaw with a circle cutting jig. My jig was made from melamine-faced chipboard; the 45° faces were perfect for the sliding table 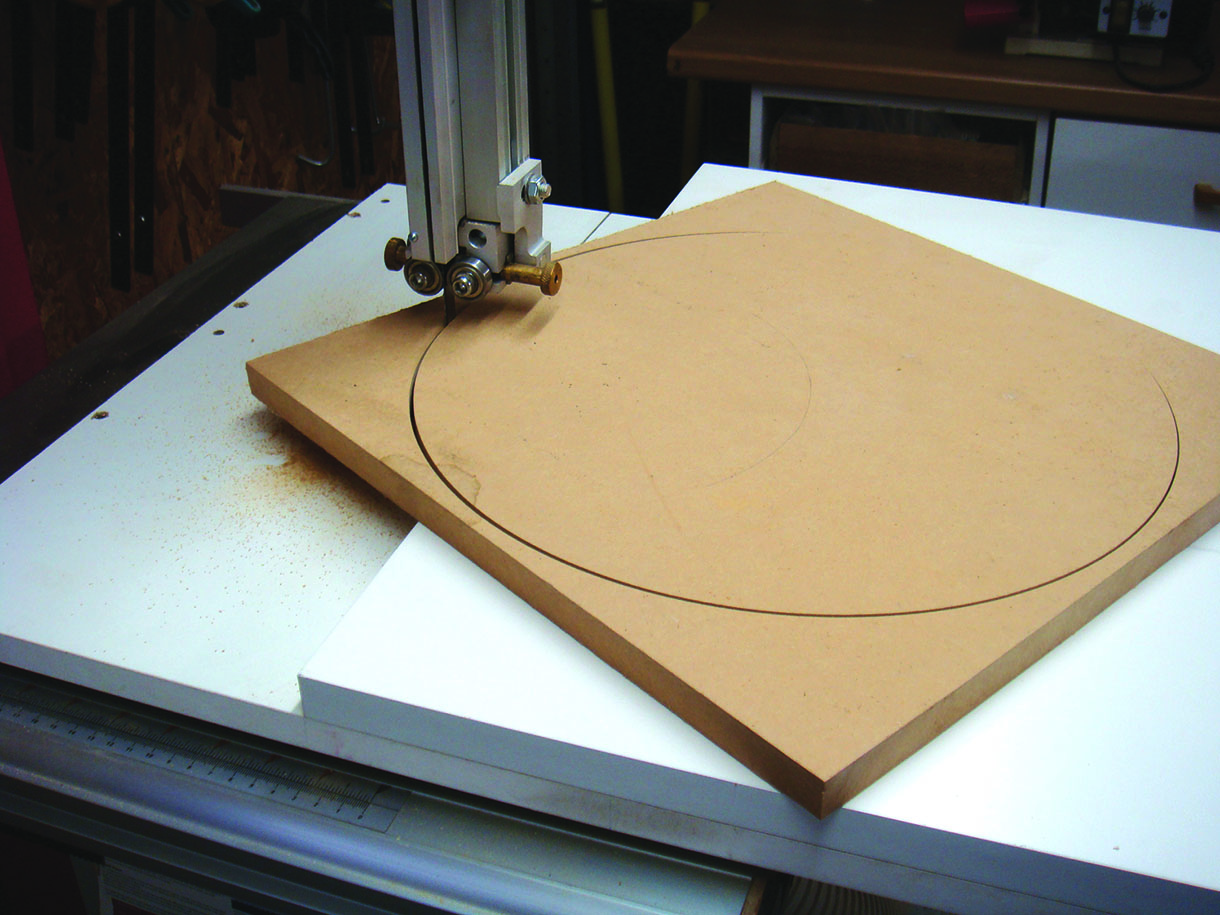 2. Cutting MDF generates a lot of dust, so I used a face mask to protect my lungs and vacuumed the jig between discs. The discs were nicely cut to size 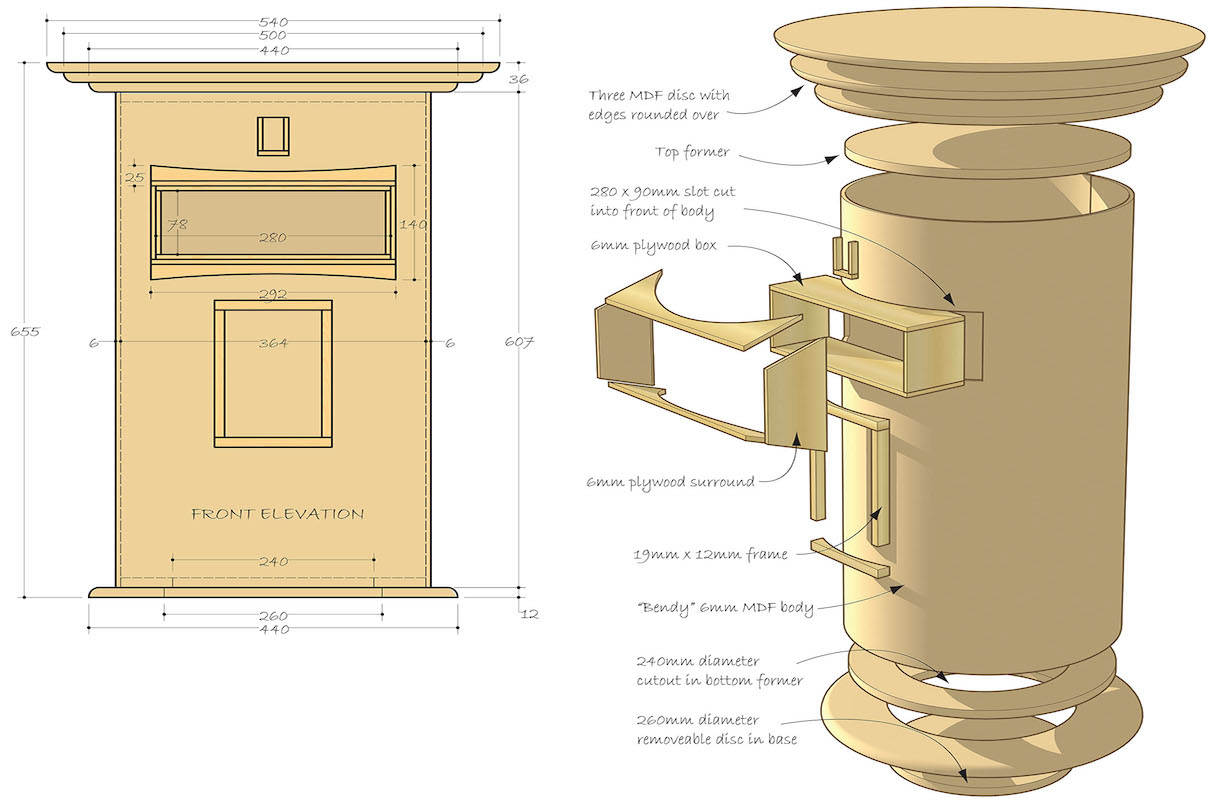 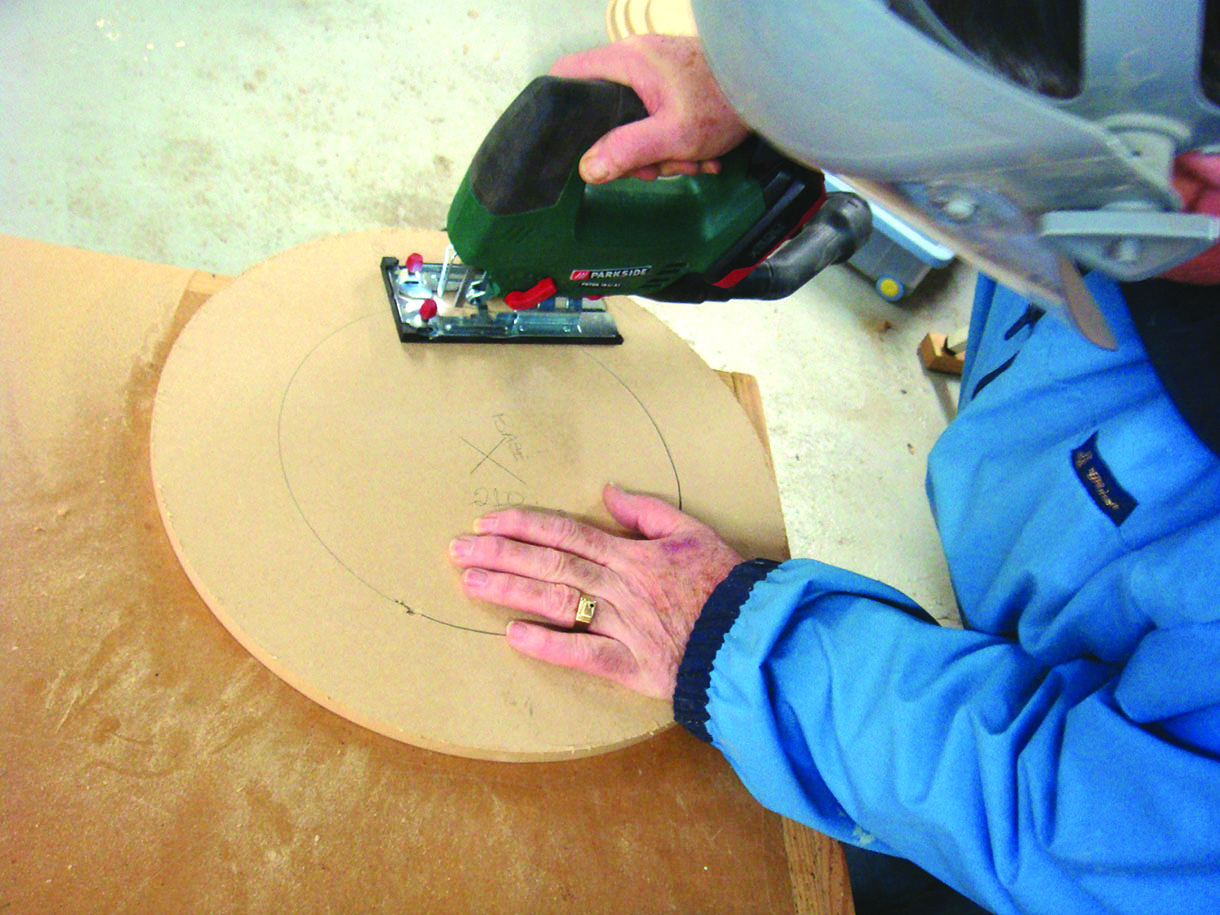 3. I created the removable security panel by cutting out the centre of the base. The disc was 260mm diameter, wide enough to get things out of the box 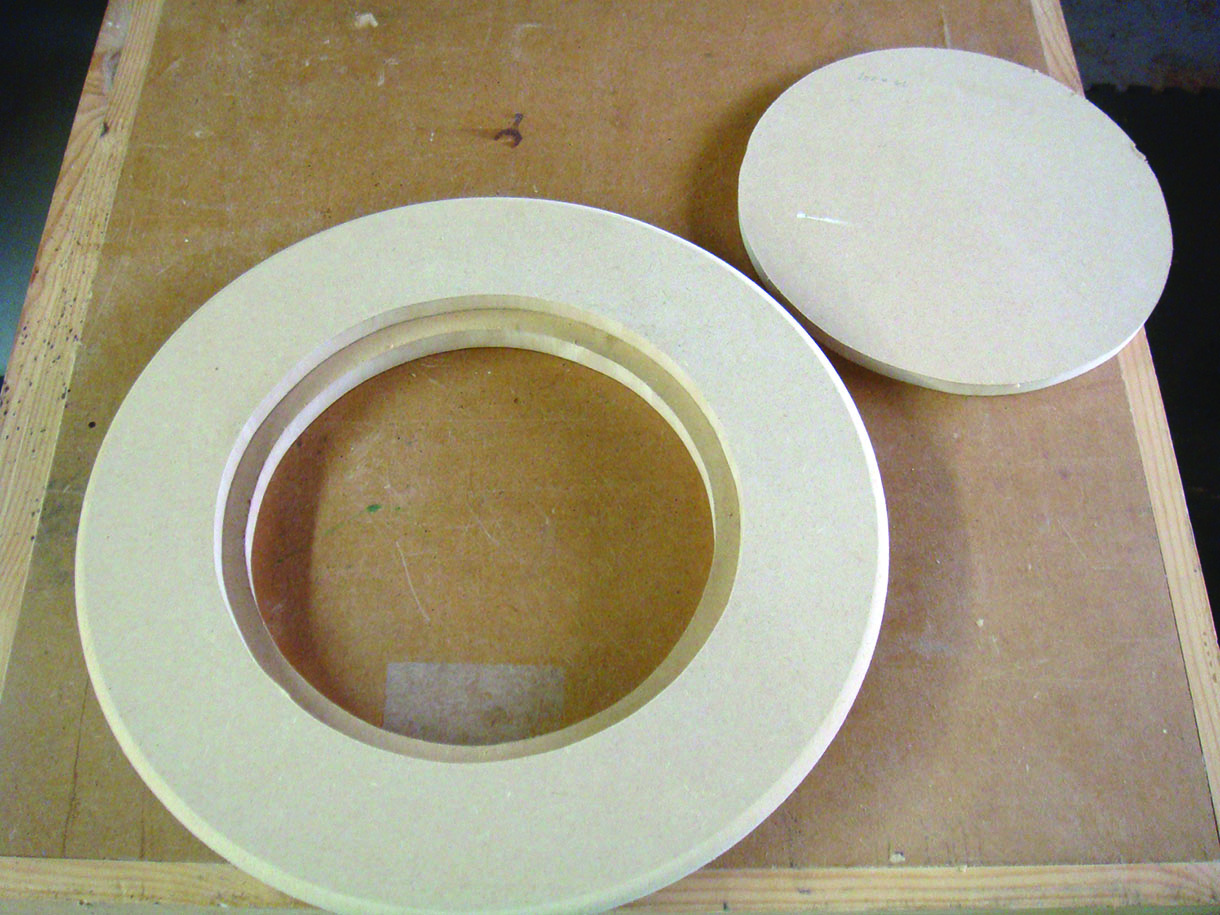 4. Next, I cut a 240mm diameter hole centrally in the bottom former, thus creating a lip to which the removable panel would be fixed 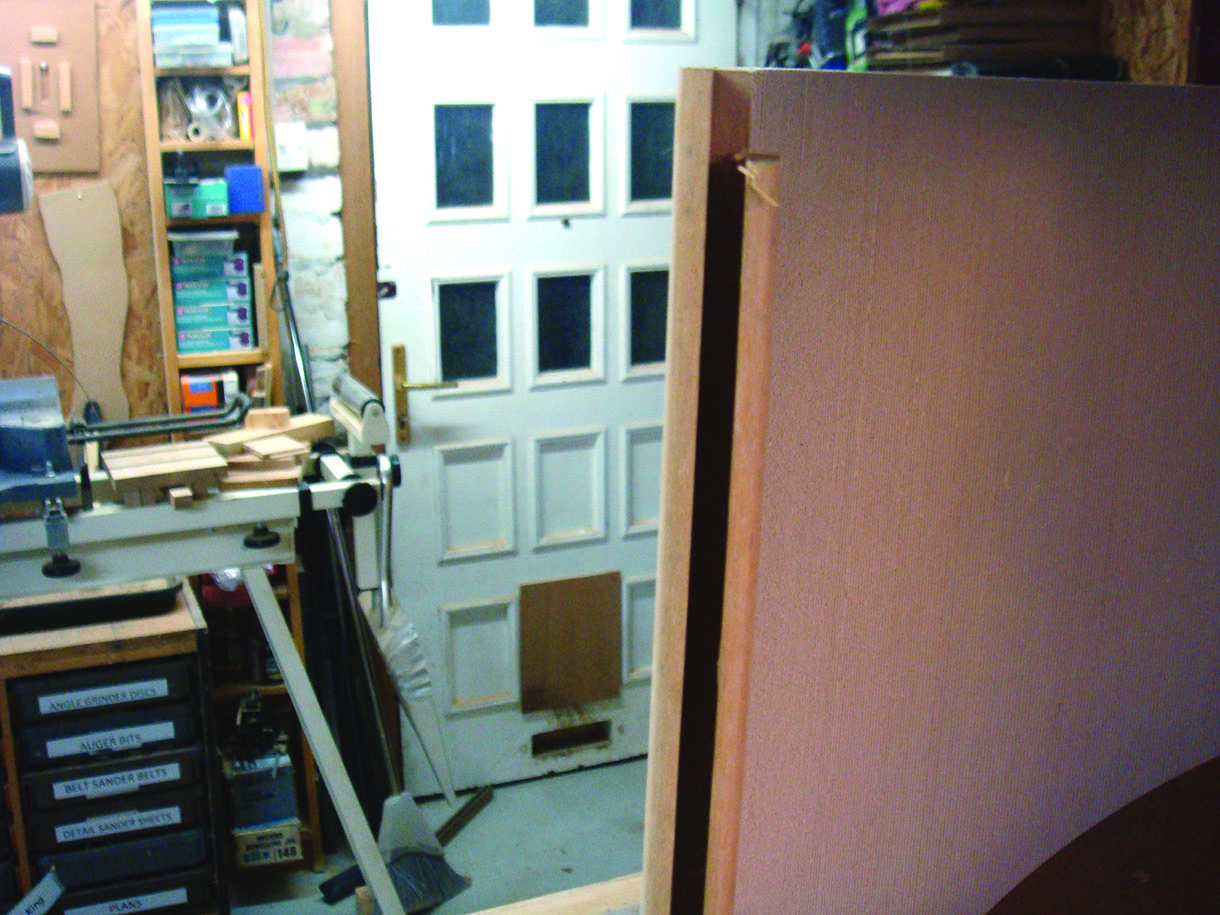 5. To support the butt joint between the ends of the MDF and to cover that joint, one end of the MDF was sandwiched between two strips of moulding. The strips were glued so that half of the width protruded beyond the edge of the MDF, creating a channel into which the other end of the MDF would fit. The internal strip was trimmed to 580mm and positioned to allow for the two internal formers 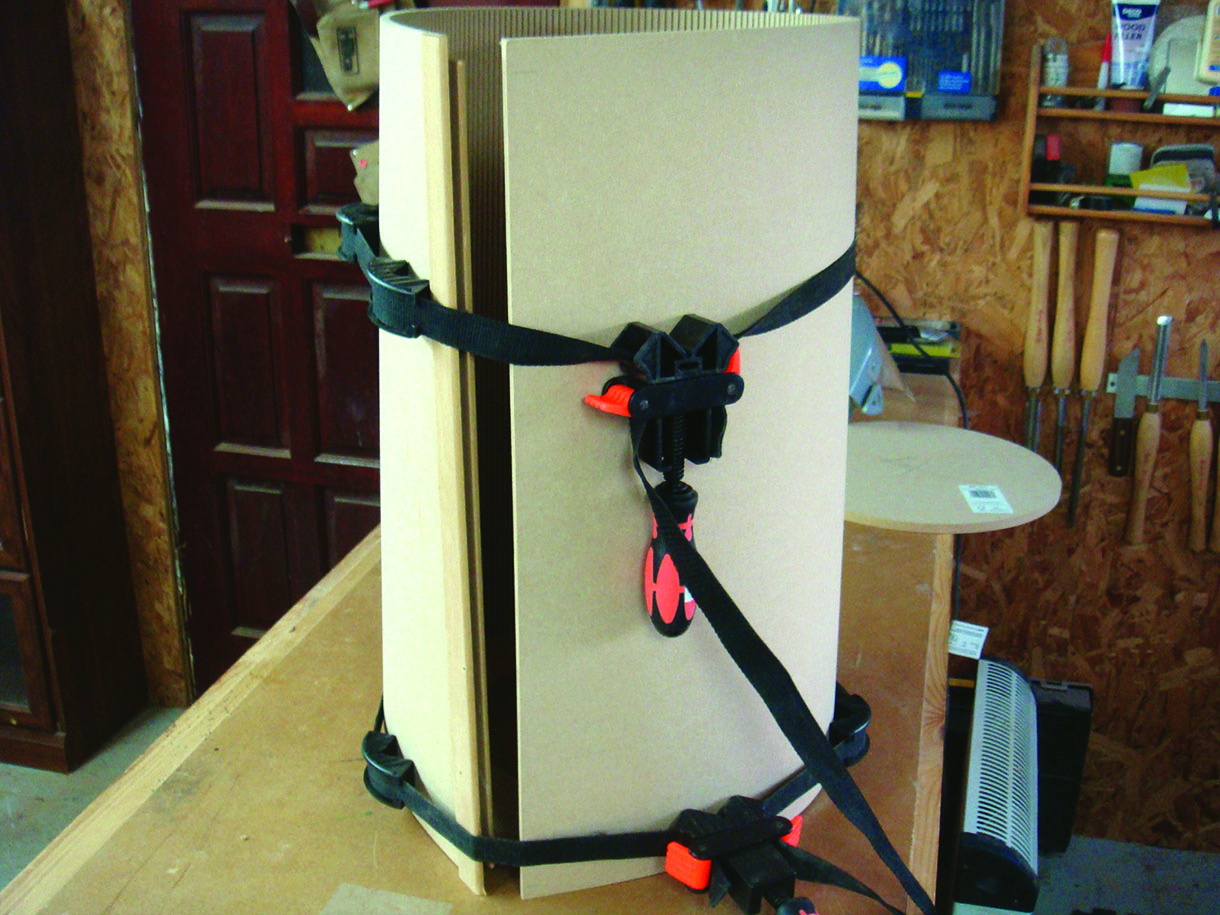 6. To make it easier to insert the MDF into the channel, both edges were lightly chamfered using a sanding block. A thin coat of adhesive was spread into the channel with a fine glue brush, ensuring all three faces of the channel were covered. Strap clamps were used to draw the MDF into shape while slotting the end into the channel. This manoeuvre was tricky and required the body to be pressed into an oval shape. This was done without either of the formers in place. Strap clamps were used to bring the MDF around the bottom former and the MDF trim, to make a tight fit 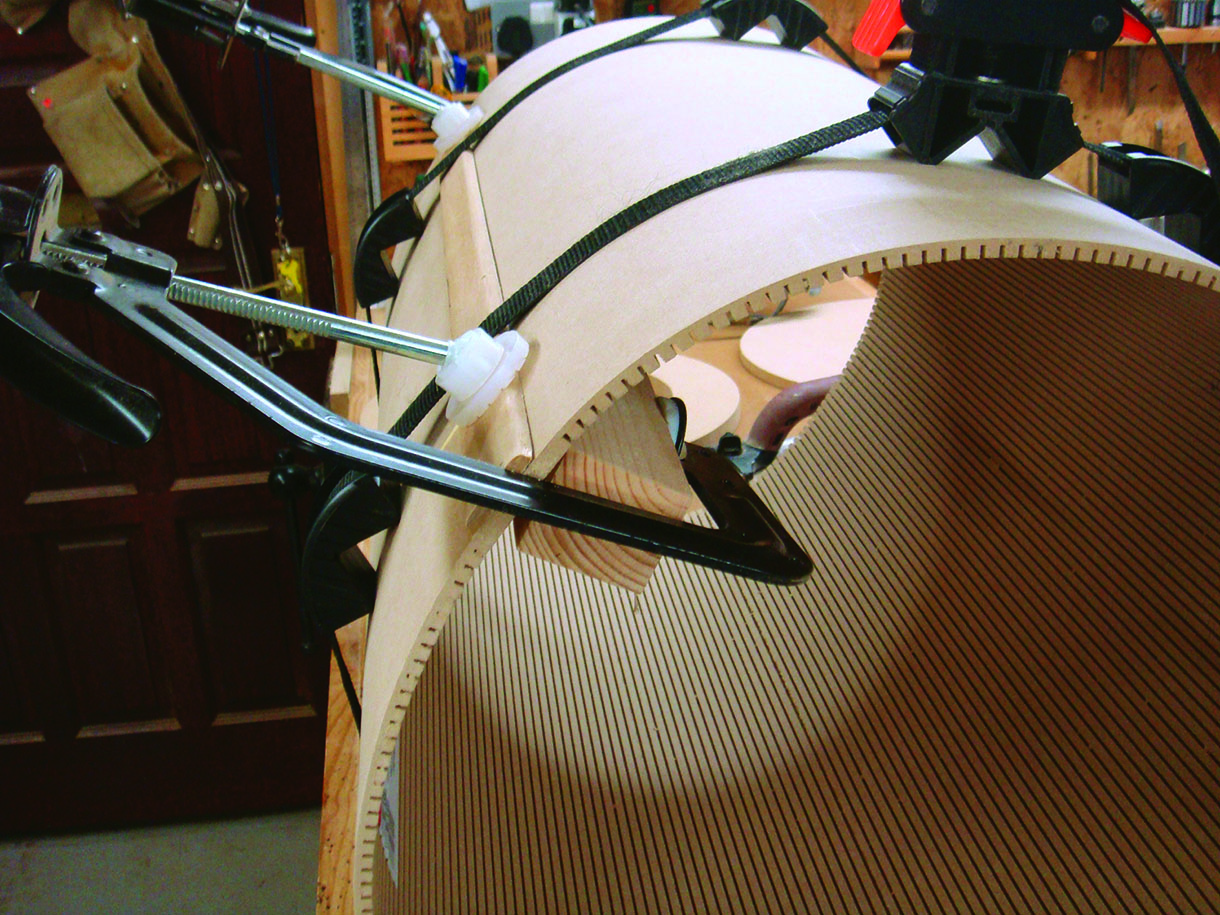 7. The glue-up was supported while drying, by clamping a rigid batten to the joint 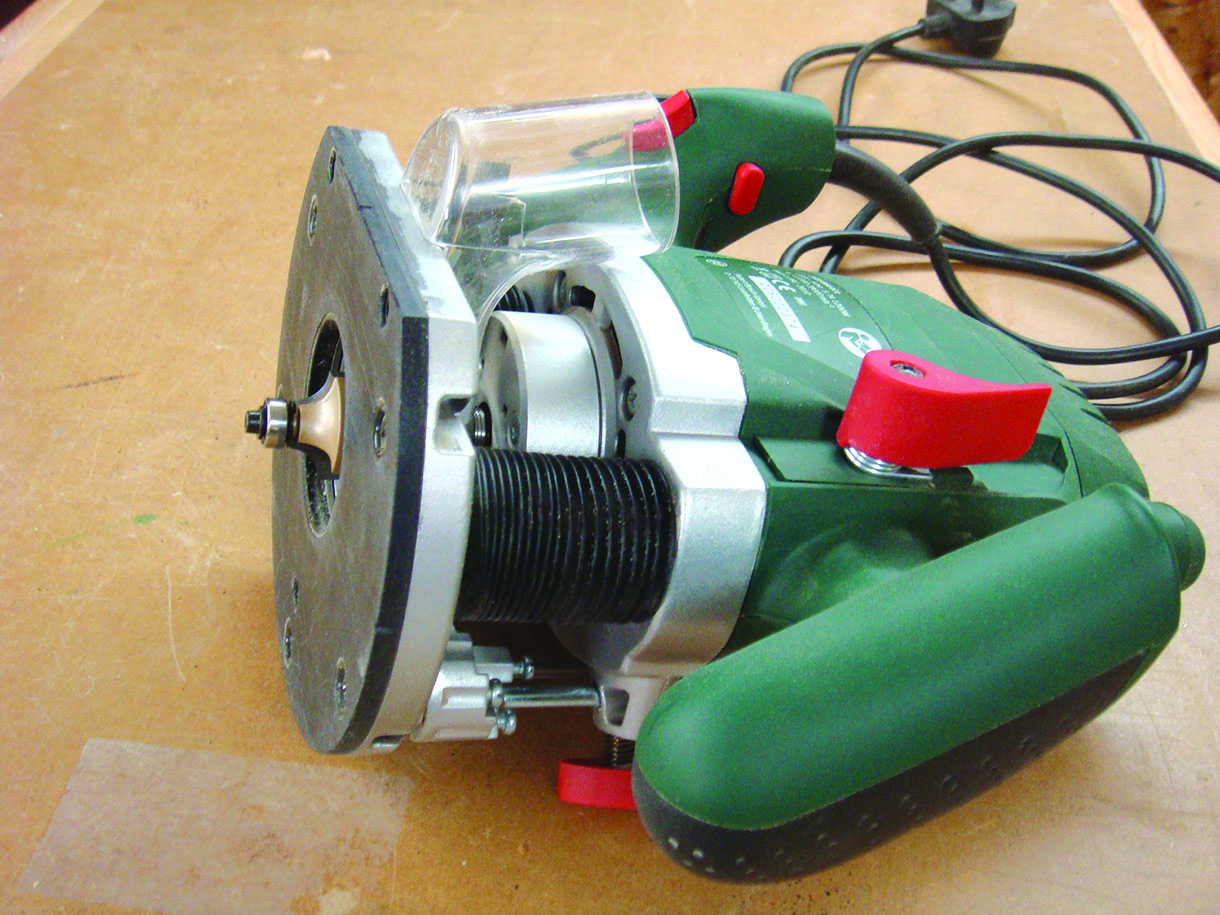 8. To tidy up the edges, a 12mm bearing-guided rounding over bit in a router was chosen, along with good dust extraction 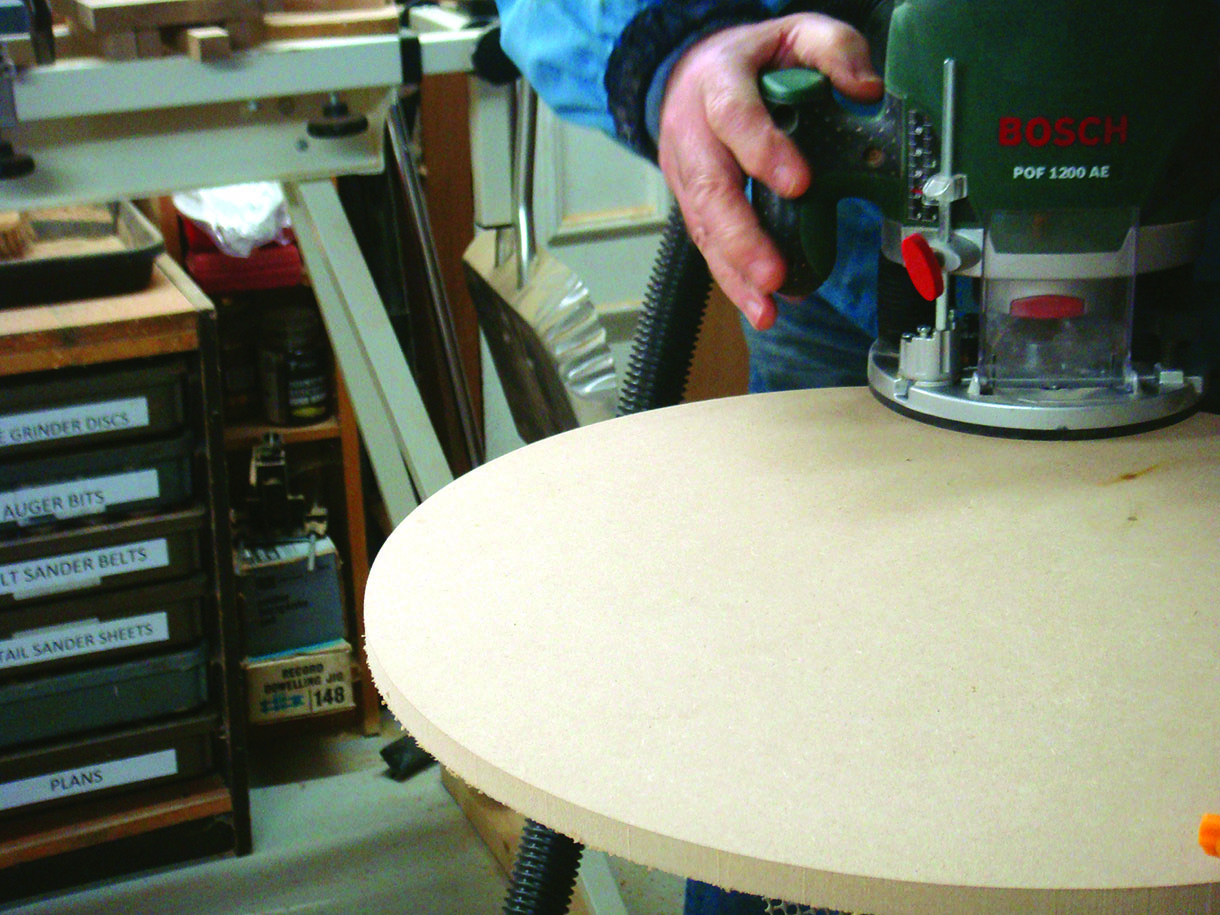 9. The top edge of the base and the bottom edges of each of the three tops were all rounded over. Circle cutting had left a central hole in one side of the top, so this face was placed upwards when rounding over the edge 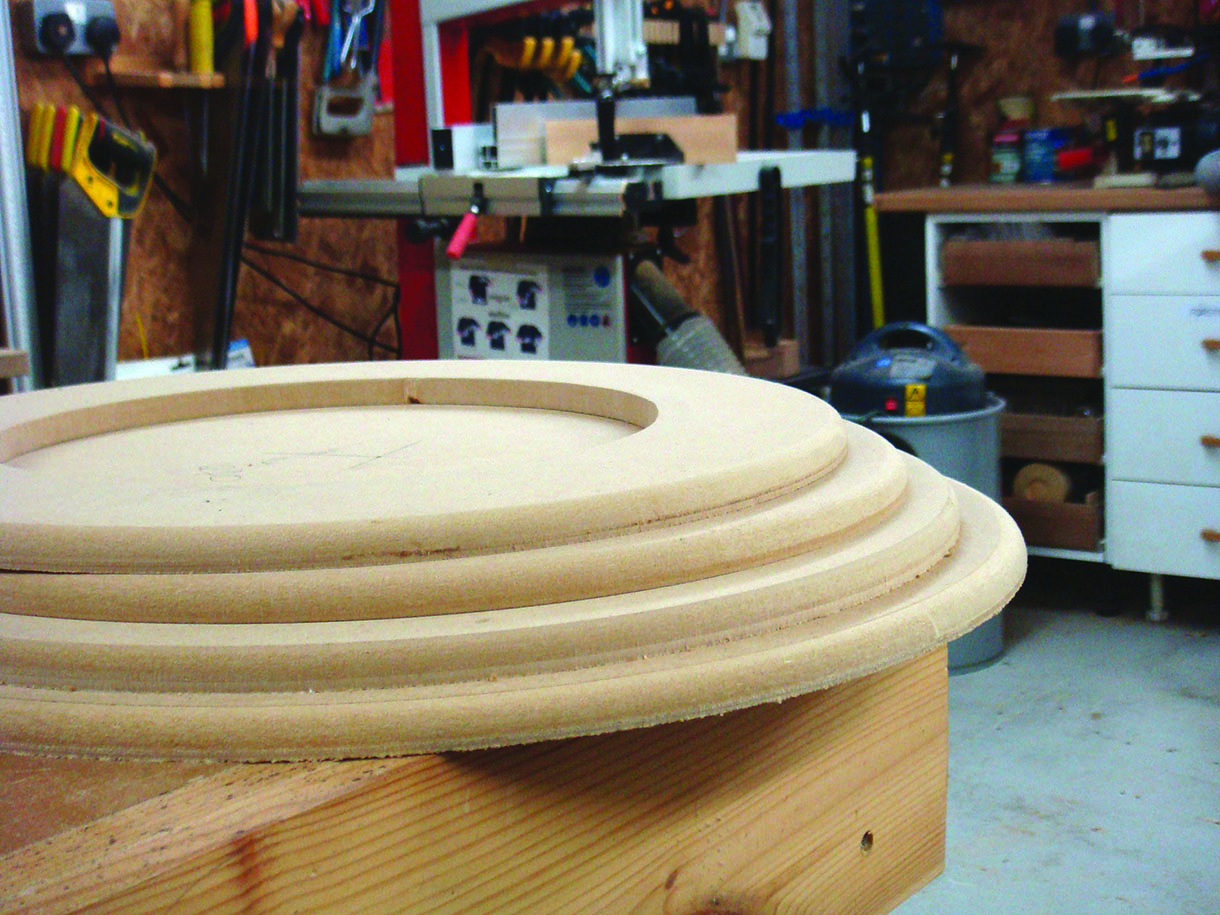 10. All four discs were now rounded over and ready for assembly 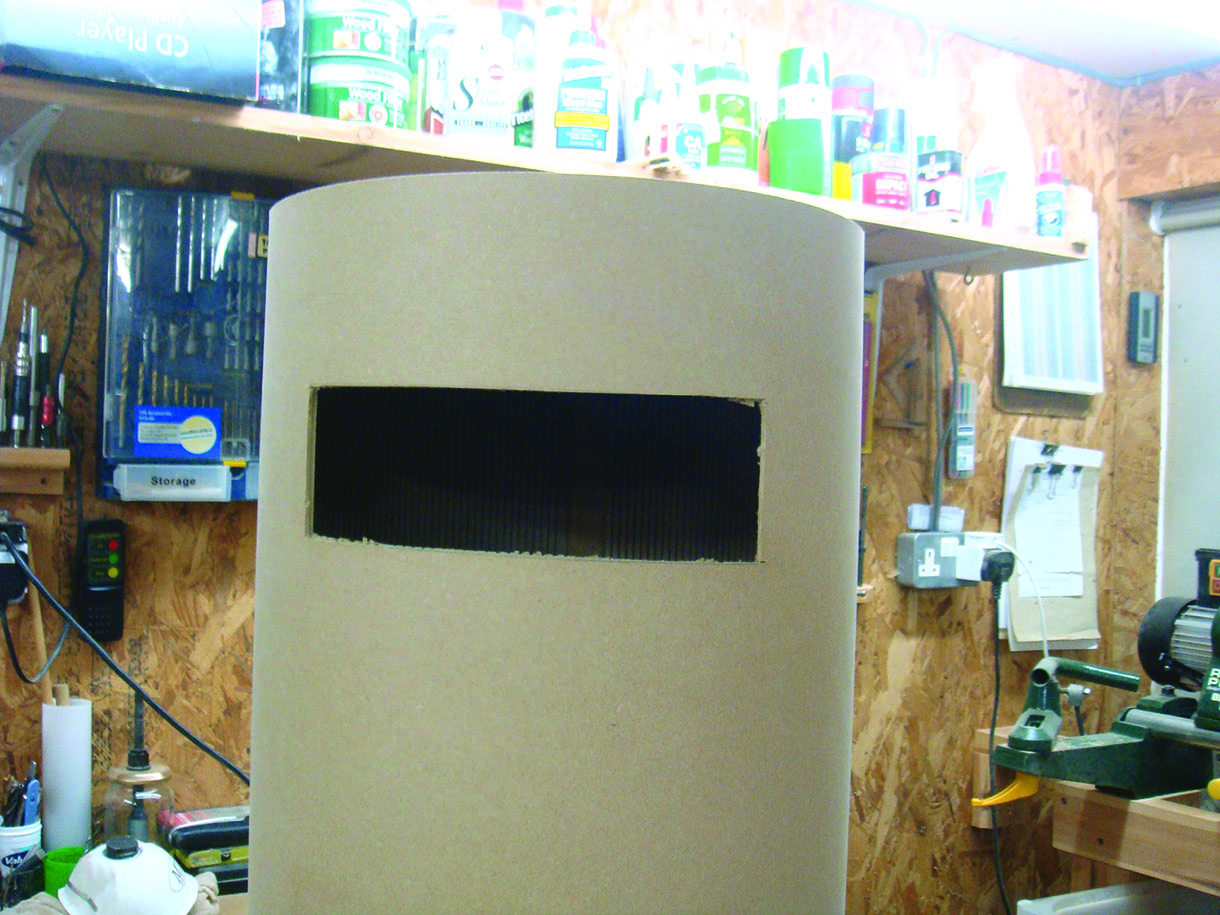 11. With all the major elements of the box ready for assembly, it was the time to cut the hole through which the cards and presents would be posted. The central line of the box would be directly opposite the join at the back of the oval. I marked out a rectangle 280 x 90mm, at 115mm down from the top. Holes were drilled in each corner and the slot was cut out using a coping saw 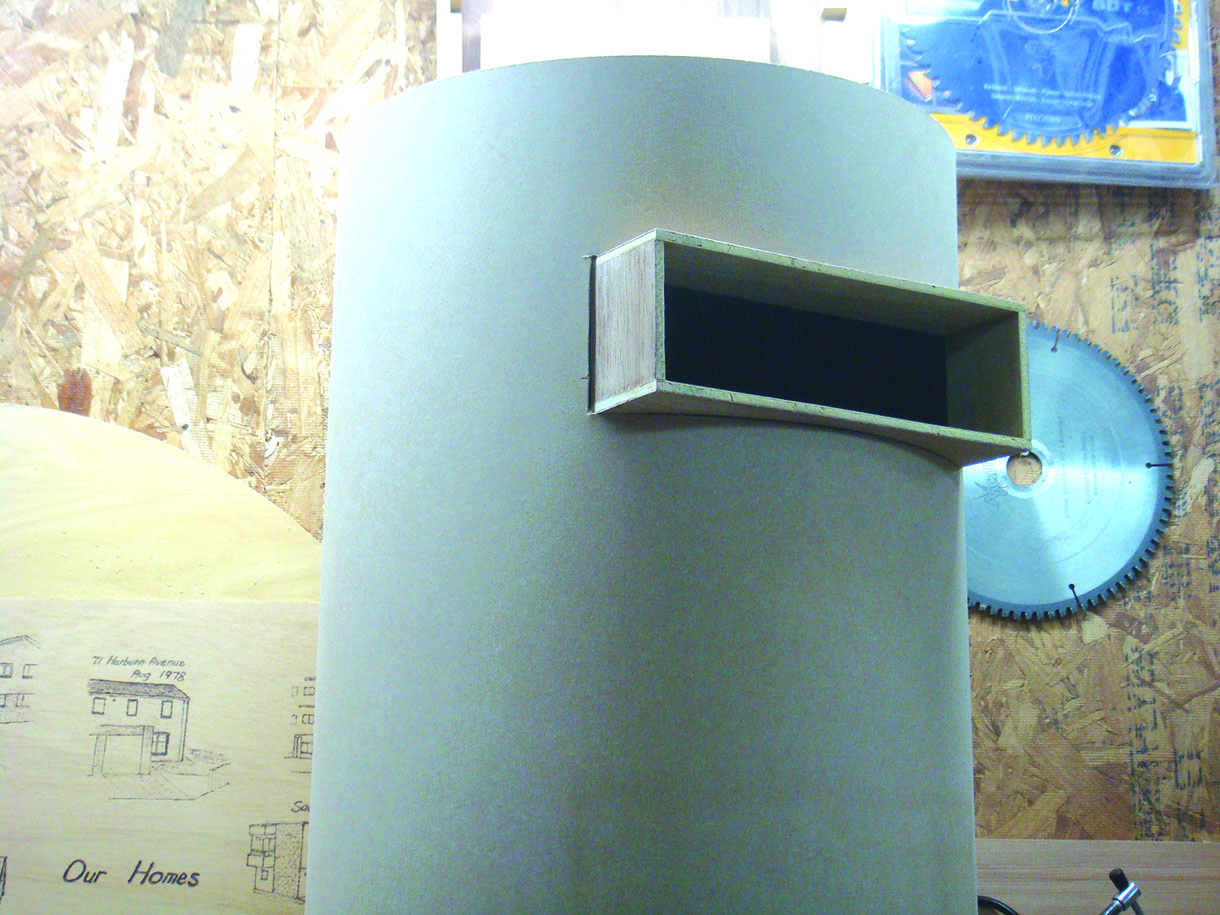 12. To create the postal slot I used 6mm ply left over from a previous project. The first step was to make a box that would fit snugly into the slot. Its overall dimensions were 280 x 90 x 90mm. After a trial fit, I glued it into position, with the front edge overhanging the central line of the body by approximately 25mm 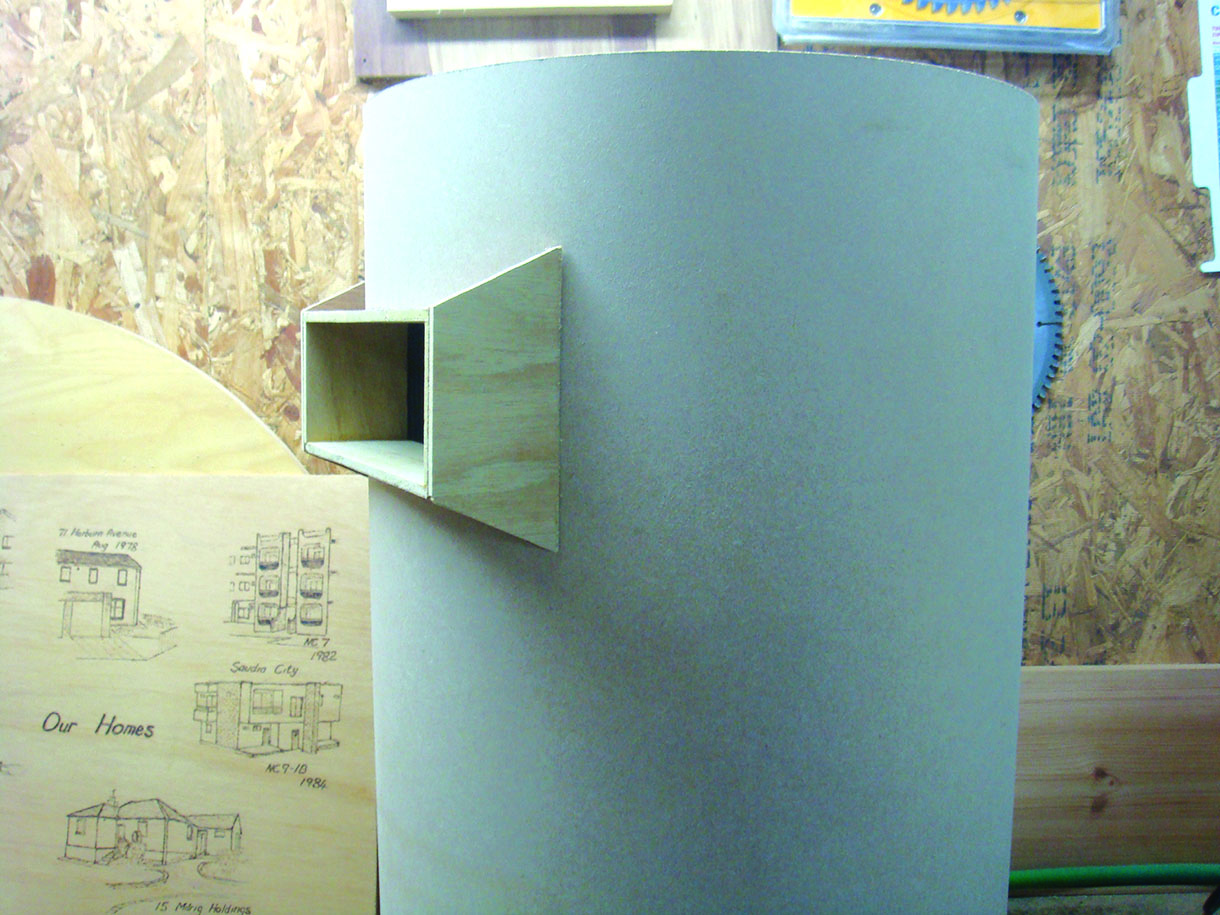 13. We now needed two side wings for the slot box. To allow for any variation in the positioning of the slot box, I made a card template. The wings looked good with the longer edge 25mm above and below the box, so I cut it to 140mm. The long edges were fettled to mate nicely with the curve of the main body and were
then glued securely in place 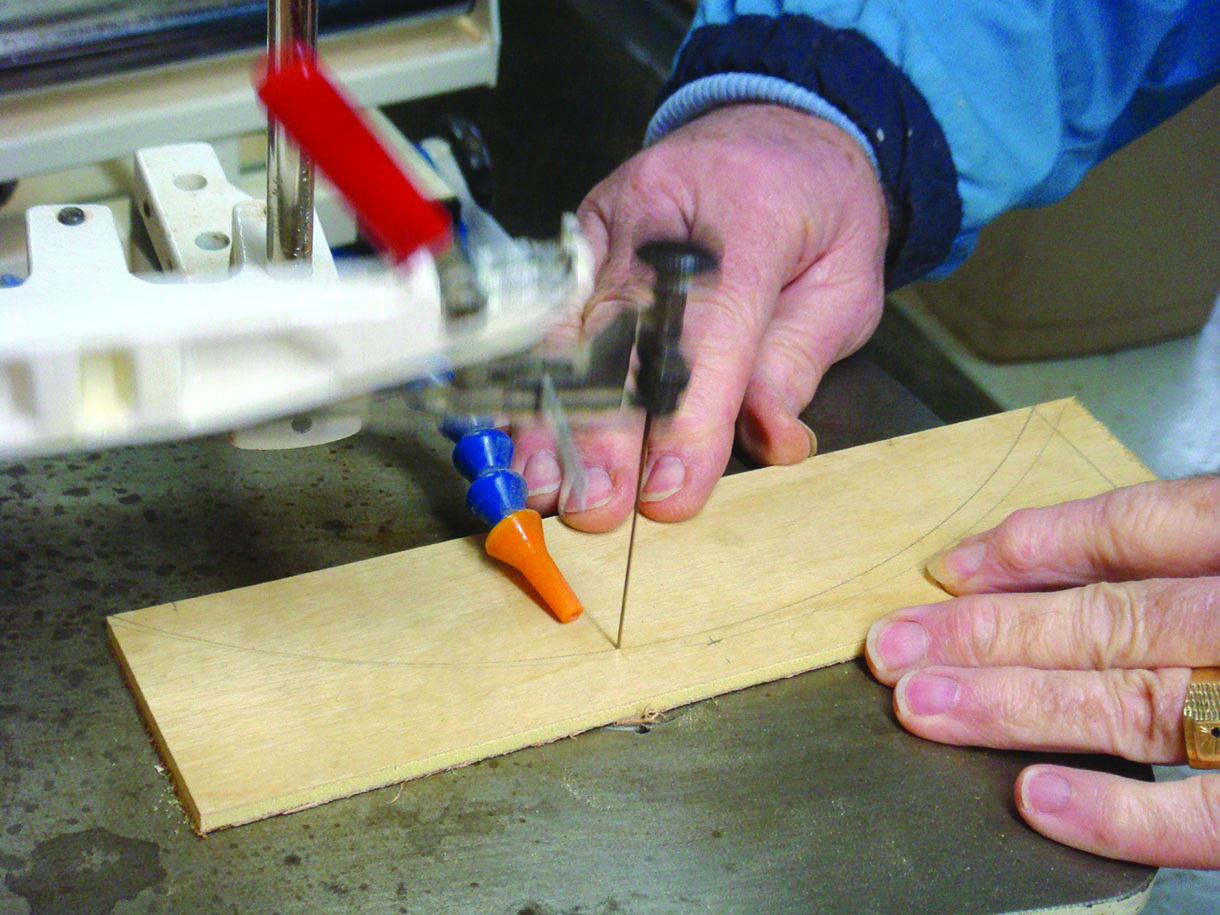 14. To complete the posting slot, it needed to have a top and bottom. I marked out the curve of the main body and cut the two pieces to shape using a scrollsaw 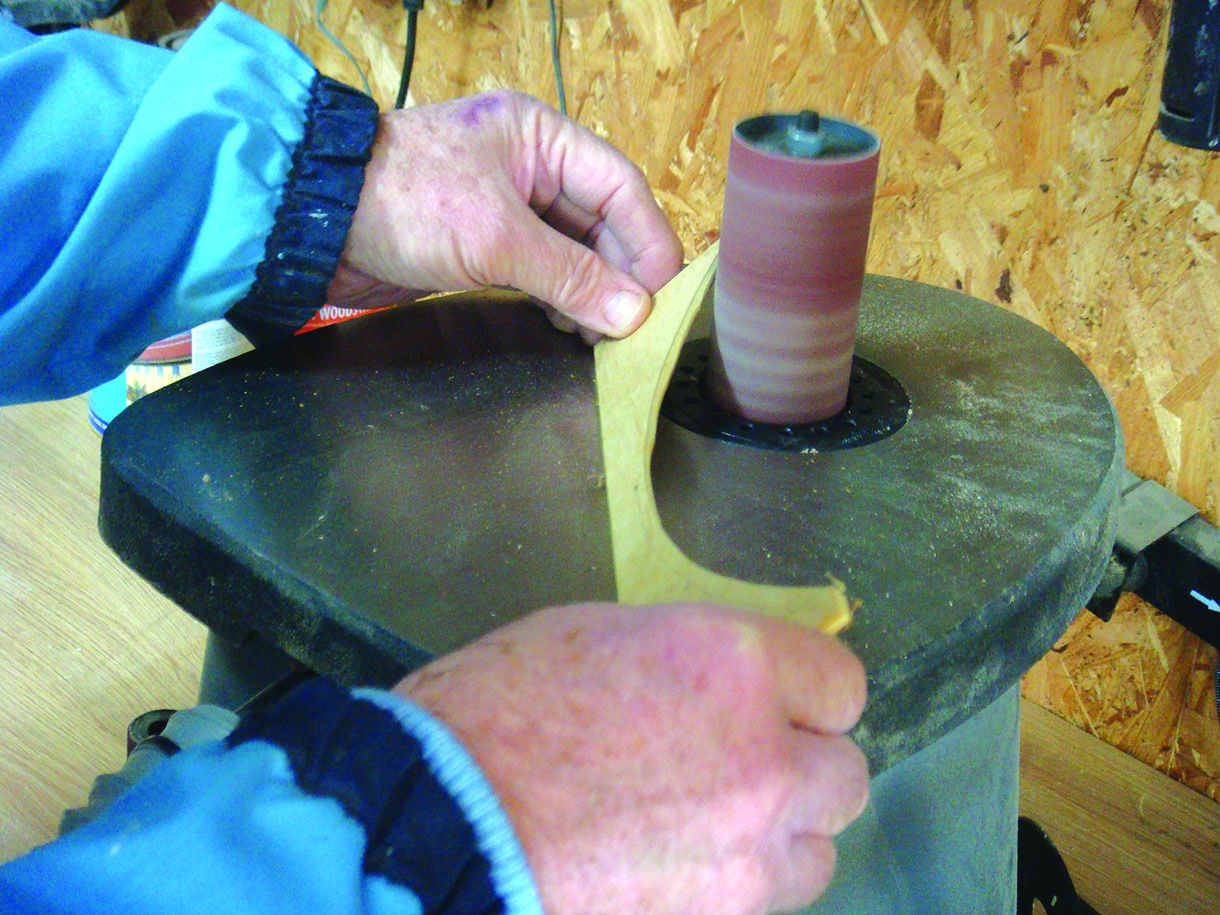 15. The top and bottom of the posting slot needed to be shaped to meet the curve of the main body. I did this on my bobbin sander, but a small drum sander in a drill would do just as well 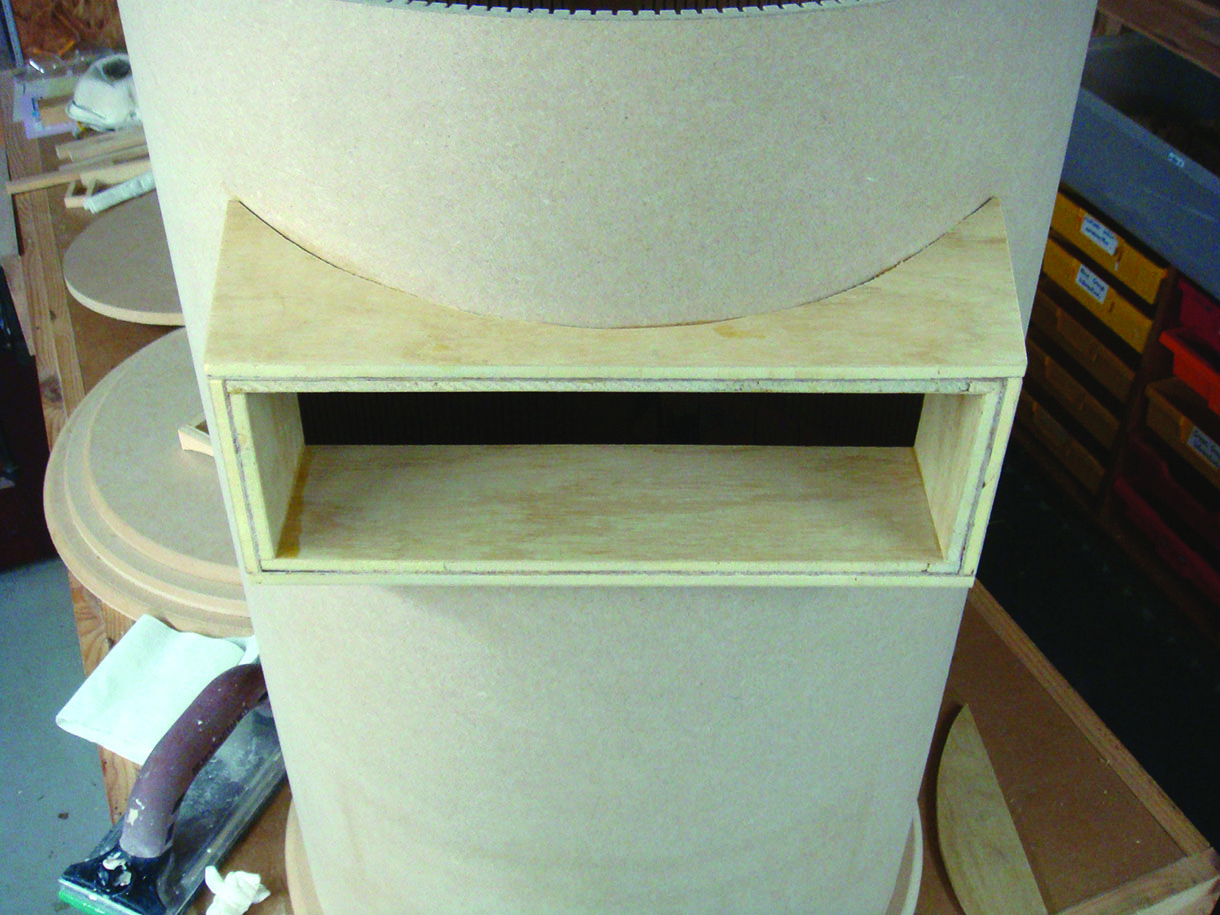 16. Once I was happy that these pieces butted nicely against the main body, I trimmed off the excess overhang to the front of the posting slot and glued in place 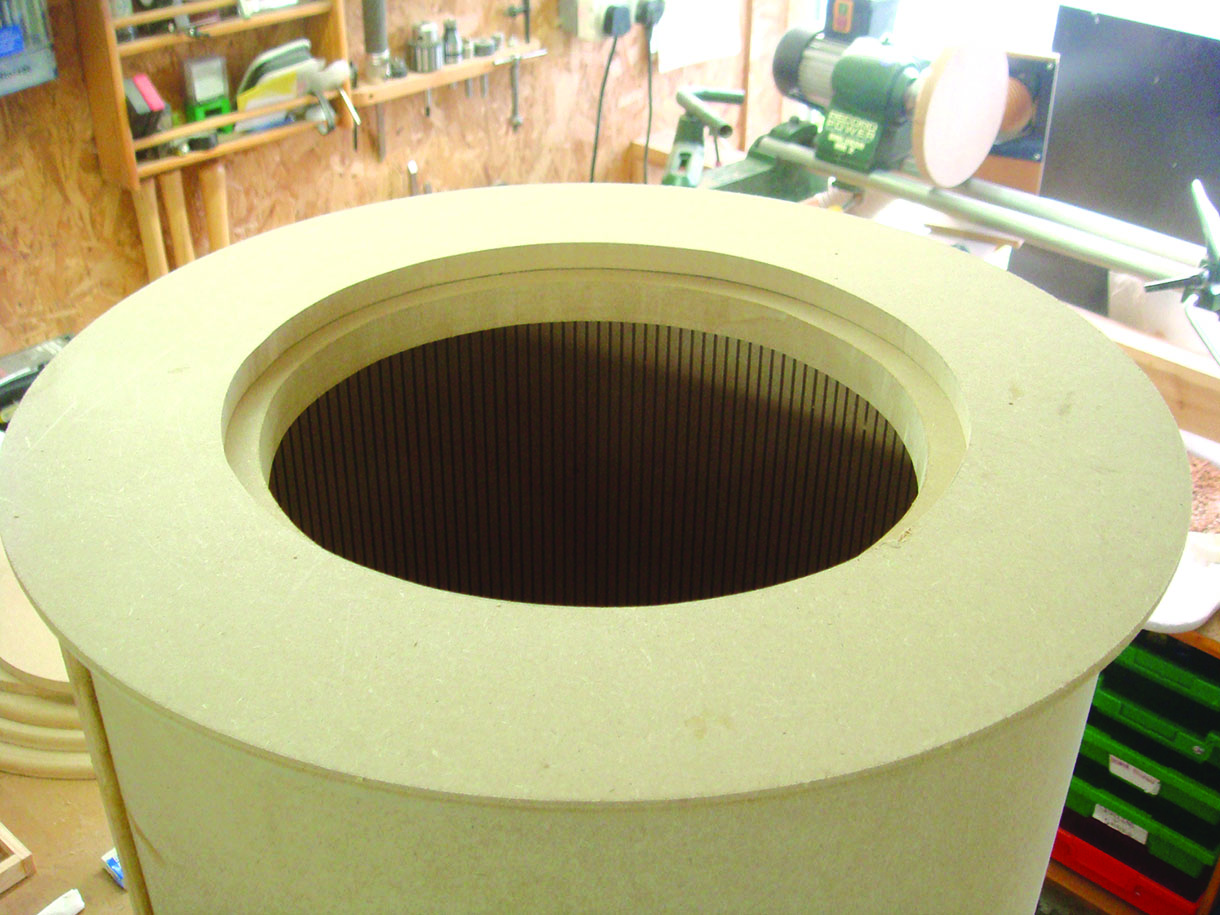 17. The lower former was centralised on the top of the base and glued together. A generous bead of glue was run around the inside edge of the bottom of the body then the lower former and base inserted 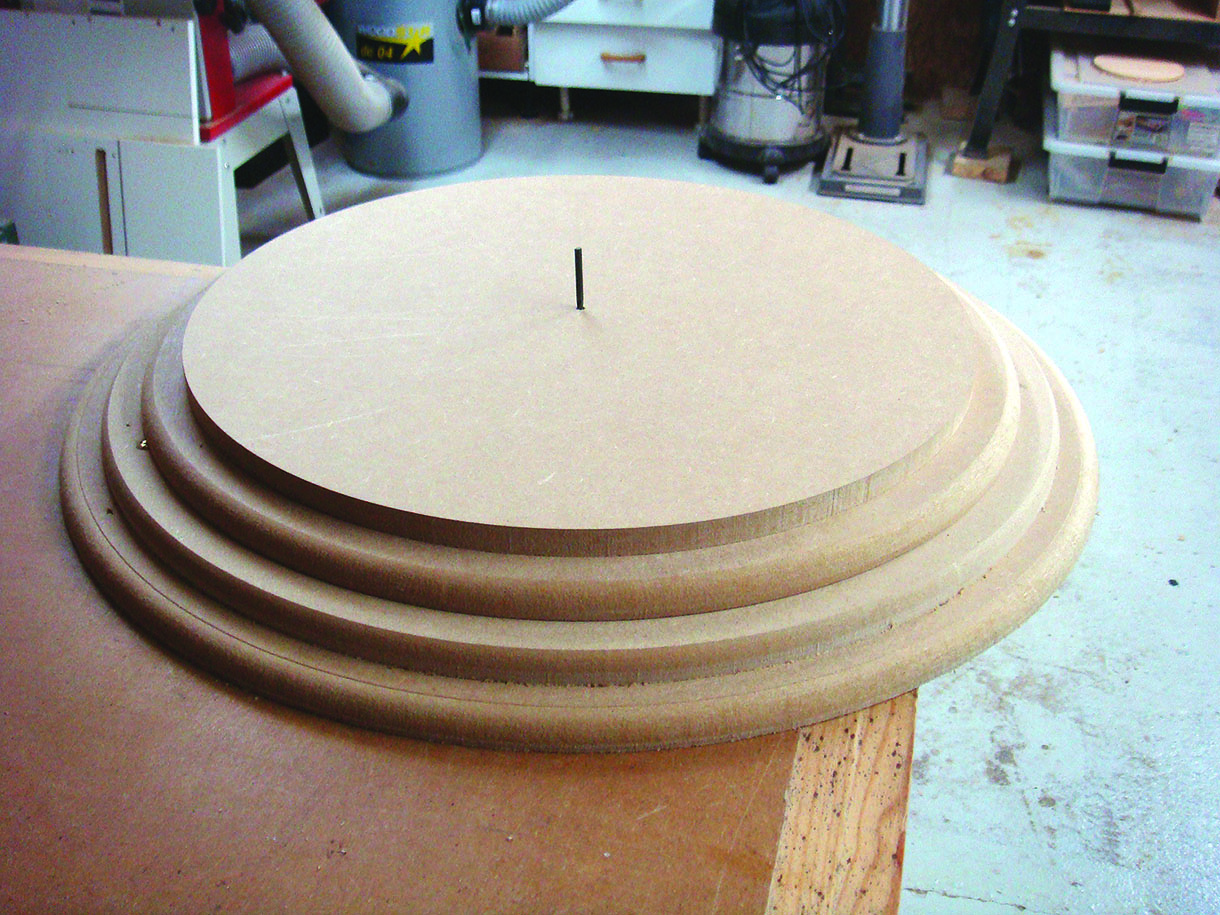 18. Next, the top former and all three top sections were centralised by drilling right through the central holes created when cutting the discs, keeping the drill vertical. Thus I could now align all four discs using a drill bit. All of the discs were then glued together. I ran a generous bead of glue around the inside edge of the top of the main body and then dropped the top assembly into place. This was a very snug fit and, because of the weight in the top assembly, did not require clamping 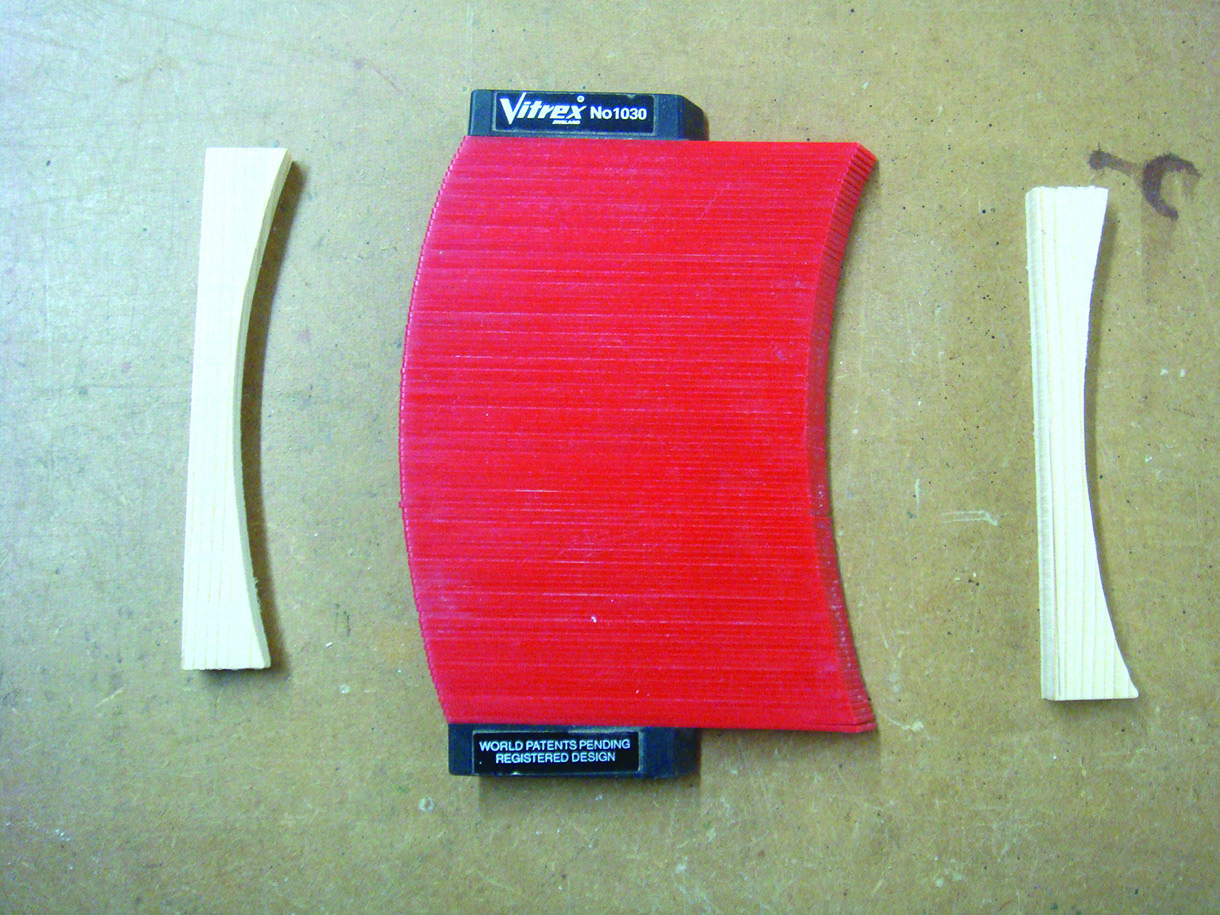 19. No postbox is complete without the day and time of the next collection. I used some 19 x 12mm redwood (Sequoia sempervirens) to create a frame sized 150 x 140mm. My profile gauge helped to determine the curve shape for top and bottom 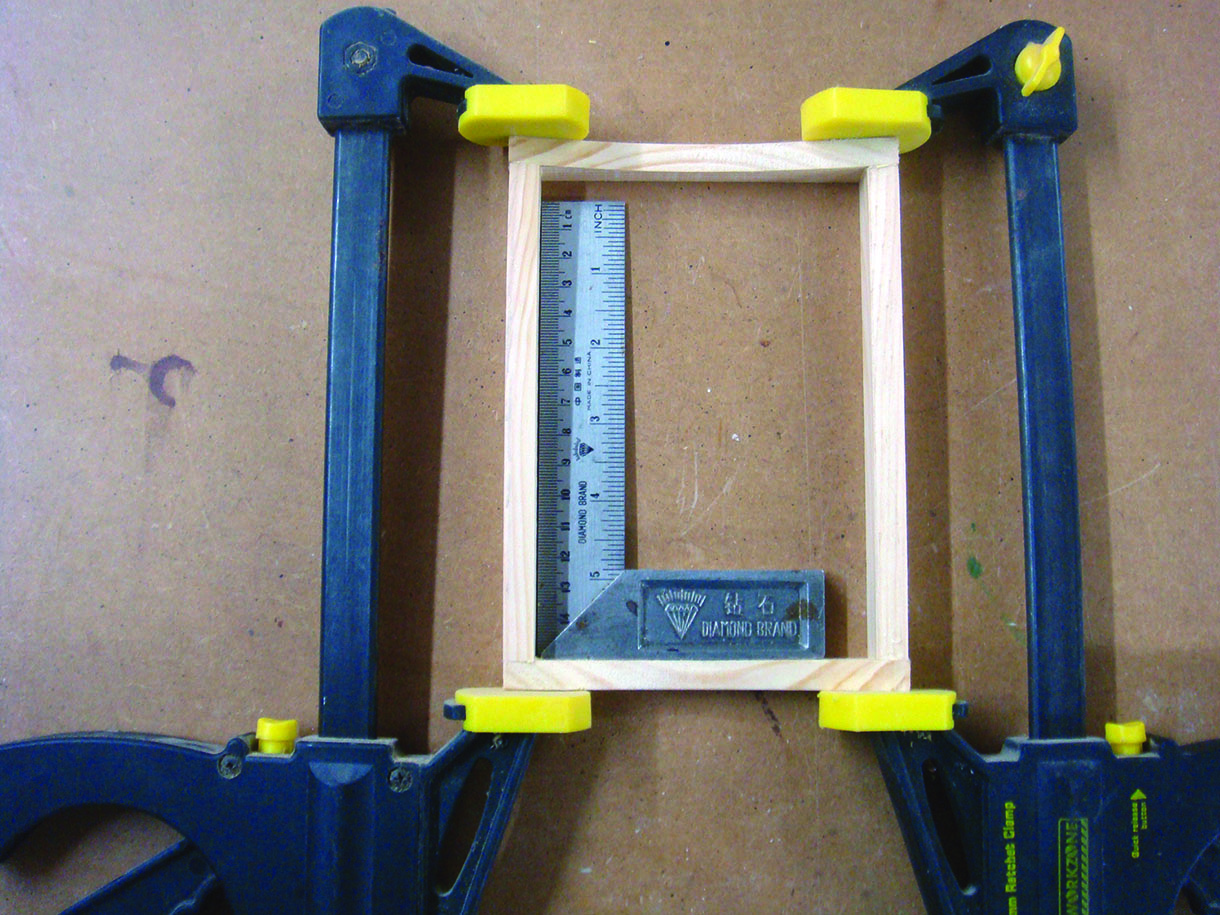 20. Having tweaked the four sides to ensure good butt joints with the box, I cramped the glue-up and set it aside to dry 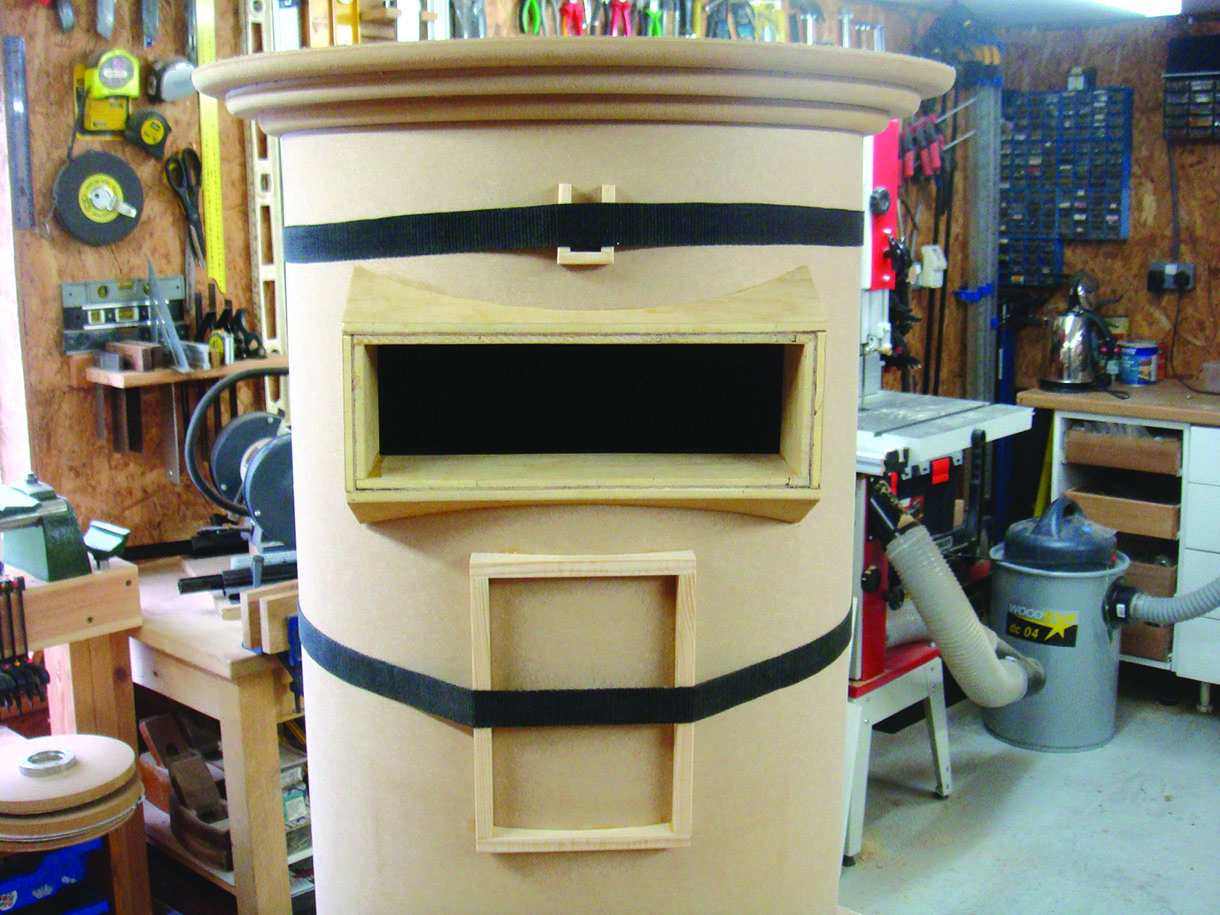 21. I also created a three sided mini-frame 35 x 25mm using 10 x 6mm stripwood, and used strap clamps to hold them in place on the body while the glue set. With the woodwork now complete, it was over to the paint department, where my wife created a vision in pink, as ordered by the bride. The ‘next collection’ notice was then inserted, and as a final touch the bride and groom’s initials and a crown were added. The box looked a real treat at the wedding and, with the addition of a glass top, is now in use as a side table in the happy couple’s home