Classical Cartouche Tray:
Steve Bisco has been saving a special piece of mahogany for a project to do it justice

This project came about when I acquired a piece of genuine mahogany (Swietenia macrophylla) at a wood fair. Real mahogany, the favourite of furniture makers in the 18th and 19th centuries, is something of a rarity these days, so I looked for a classical-style project that would do it justice.
A cartouche is an ‘architectural’ feature much favoured in the Classical Baroque style. It can take several forms. It is usually, but not always, oval in shape and frequently has a domed interior displaying a coat-of-arms, a memorial epitaph or a door number. It is also often used as a frame for a picture or mirror or, as in this case, framing the flat interior surface of a plate or tray. The feature common to most of these variations is the scrolled border representing the frayed and wildly curled edges of a sheet of parchment. Cartouches occur in carved wood, stone and marble, in silverware and in printed form in 18th-century bookplates.
On the assumption that you have no need for a memorial epitaph or coat-of-arms, I have designed this example as a decorative mahogany tray, although you could easily adapt it to a mirror frame. It has tightly curled scrolls at the sides and looser ones at each end, with four small flowers to lighten it up. The cartouche is edged with a narrow border, which I have gilded in the traditional manner to contrast with the rich dark wood. I have used imitation gold leaf (basically brass) as it is a lot cheaper than real gold and easier to use.
I have also used the traditional finish of French polish, which brings out the warm dark red of the mahogany and complements the rich glow of the gilding.

Top tip
Cabinet scrapers are a useful addition to the woodcarver’s toolkit. They enable you to get a smooth glossy finish on a broad surface by pulling the scraper along in a near-vertical position. They usually come in threes, with a flat edge for flat surfaces and a variety of curves for curved surfaces. To sharpen them you grind or file squarely across the edge and the slight burr created will do the scraping. 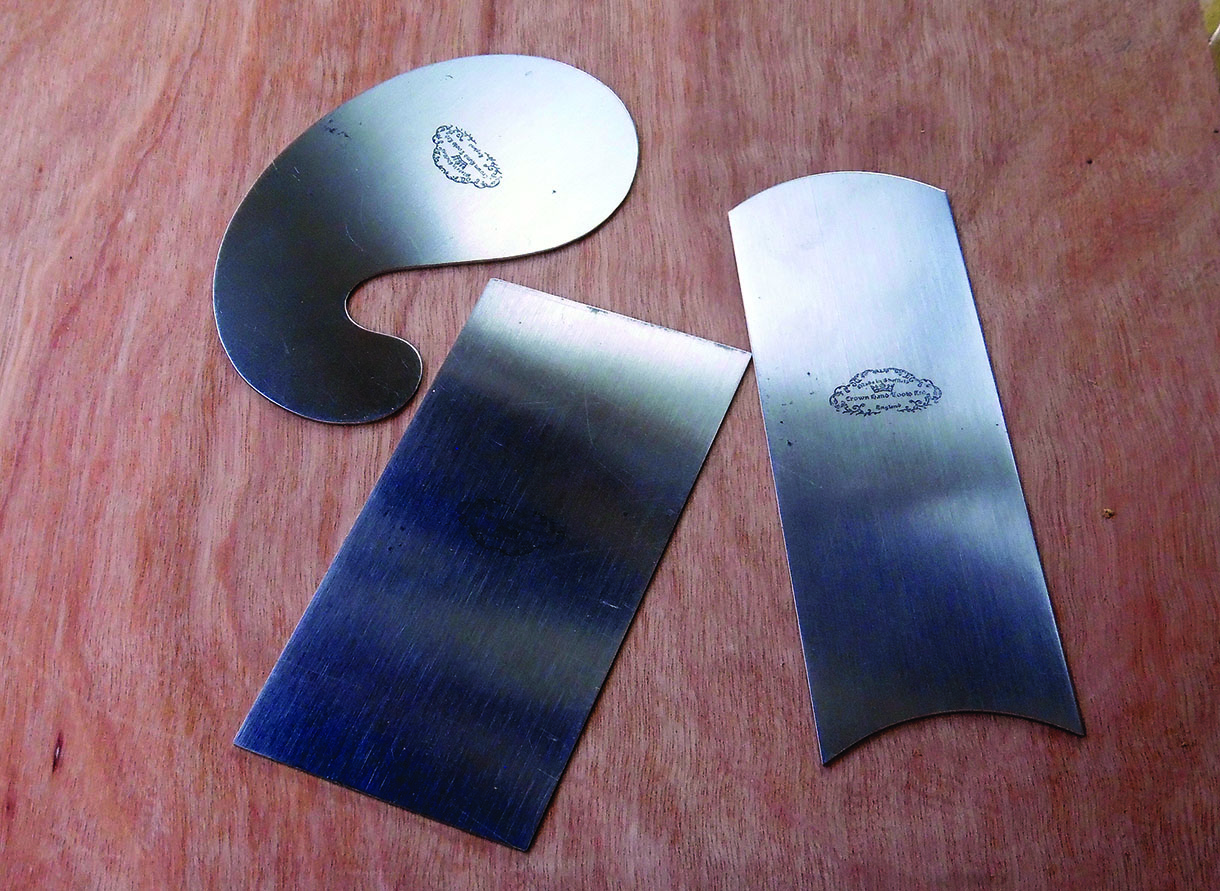 Mahogany
Mahogany is a tropical timber that was first imported into Europe in the 18th century and quickly gained favour for its rich red lustrous surfaces, pushing our traditional oak (Quercus robur) into its exotic shade. Cabinetmakers and decorative carvers like Thomas Chippendale were quick to exploit its potential and it was soon established as the familiar ‘brown furniture’ of the Georgian and Victorian eras.
The mahogany traditionally used for carving and cabinetmaking came mainly from tropical Central America and was the species Swietenia macrophylla, generally known today as ‘Genuine’, ‘Honduras’ or ‘Brazilian’ mahogany. Because it is a rainforest species, logging is strictly controlled and it was for a while very difficult to obtain. Thanks to newer sustainable plantation-grown stocks, it is now a bit easier to source from specialist suppliers (try the internet and the timber suppliers’ adverts in this magazine). If you cannot get genuine mahogany, substitutes like sapele (Entandrophragma cylindricum) are the next best thing and are quite easy to obtain.
Genuine mahogany carves well despite being fairly hard, and it produces a beautifully rich period effect when finished with French polish and decorated with gilding. 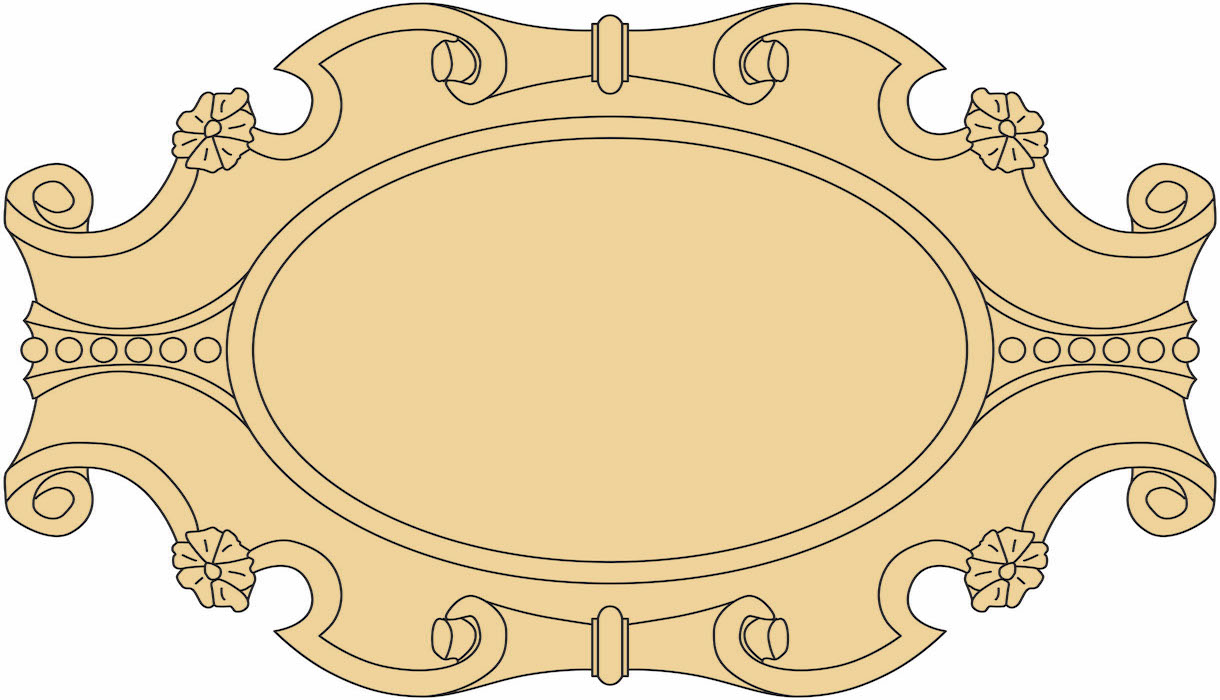 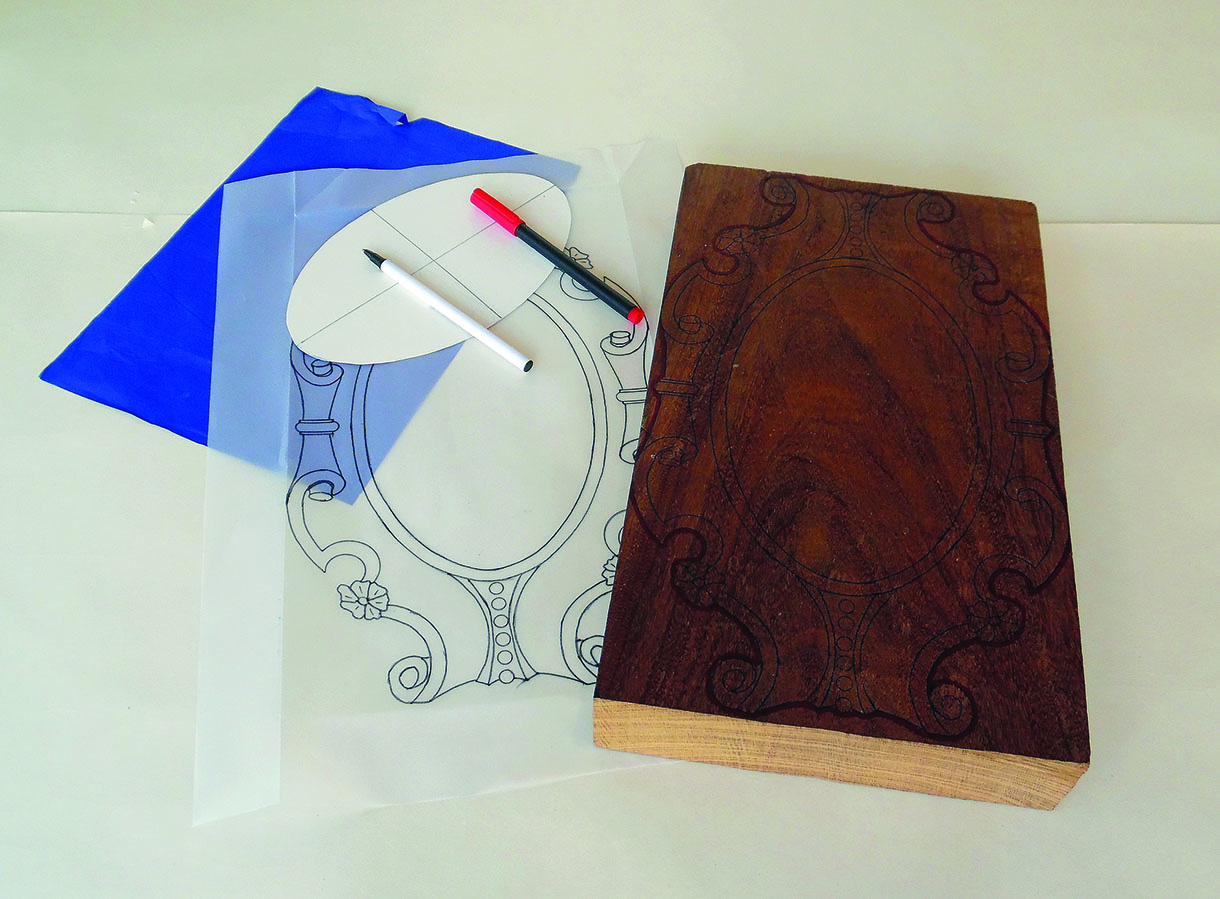 1. Get a piece of mahogany 350 x 210 x 50mm. Make a full-size copy of the drawing and trace the pattern onto the wood using carbon paper. Also trace and cut out a card template of the central oval 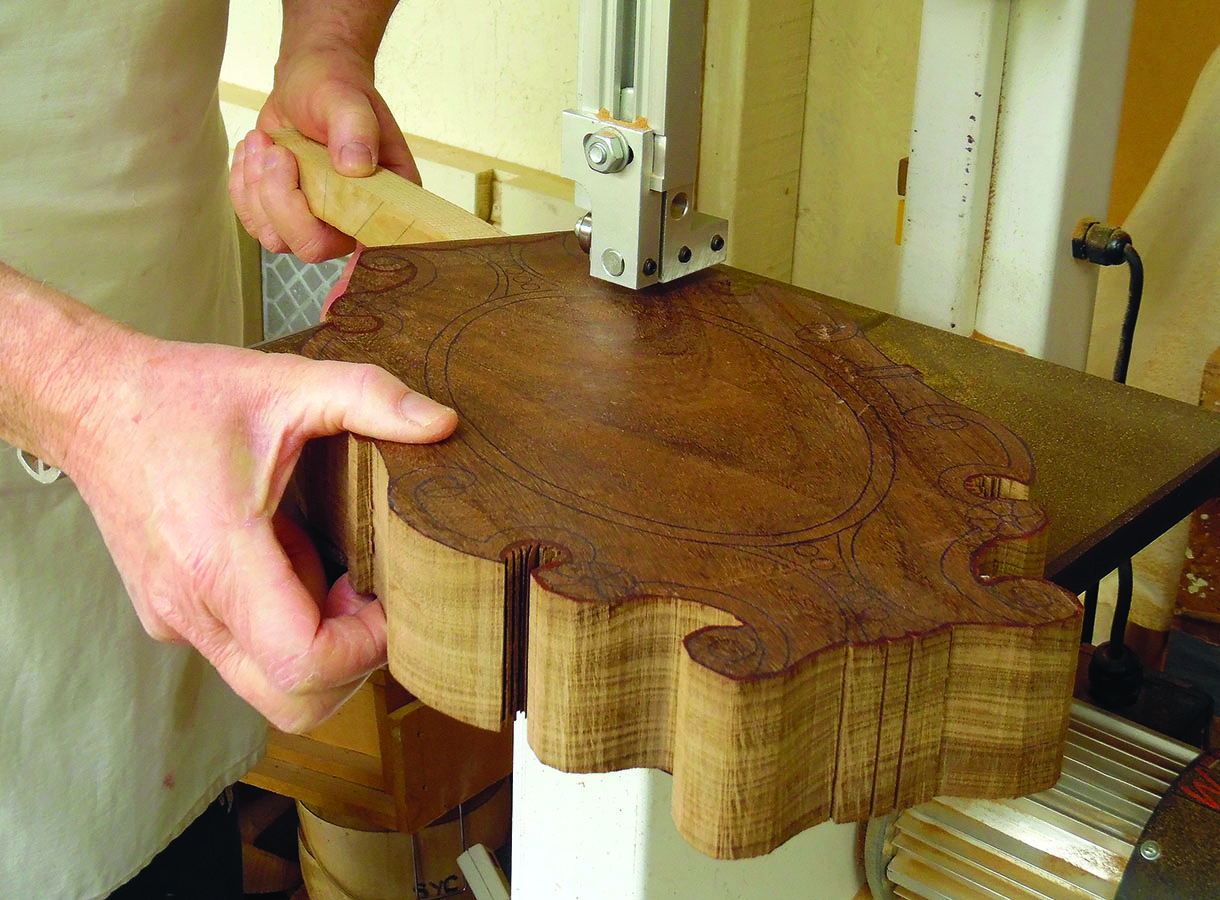 2. Use a bandsaw, jigsaw or scrollsaw to cut neatly round the outside of the pattern. The semi-circular ‘eyes’ need some care and you may need to finish them with a rasp or gouge

Carving the upper side 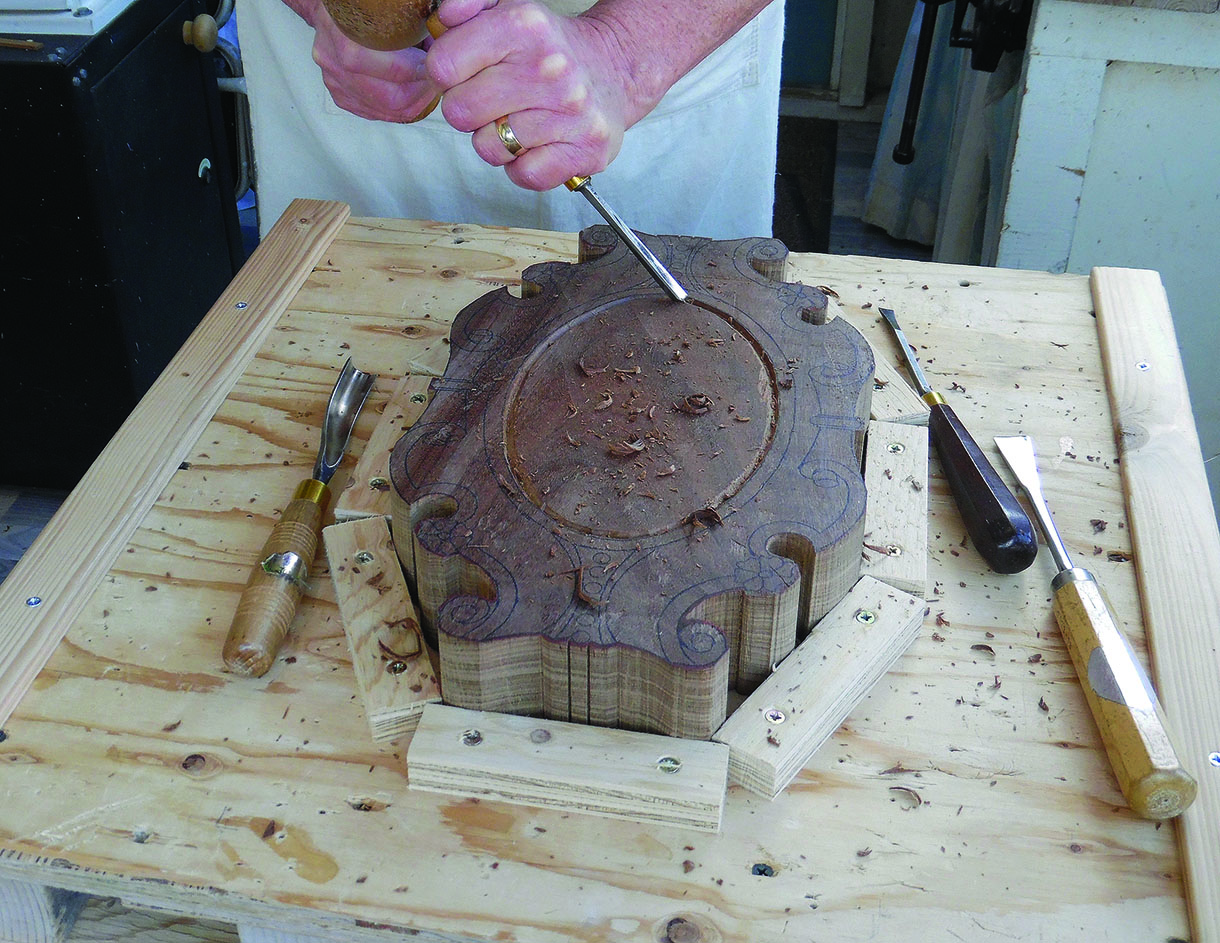 3. Fix some wooden blocks onto a backing board to hold the carving in place. Screw or clamp the backing board to the bench so you can either walk around it or easily move it around to get the best carving direction. Start carving by using a V-tool to define the inner edge of the central oval 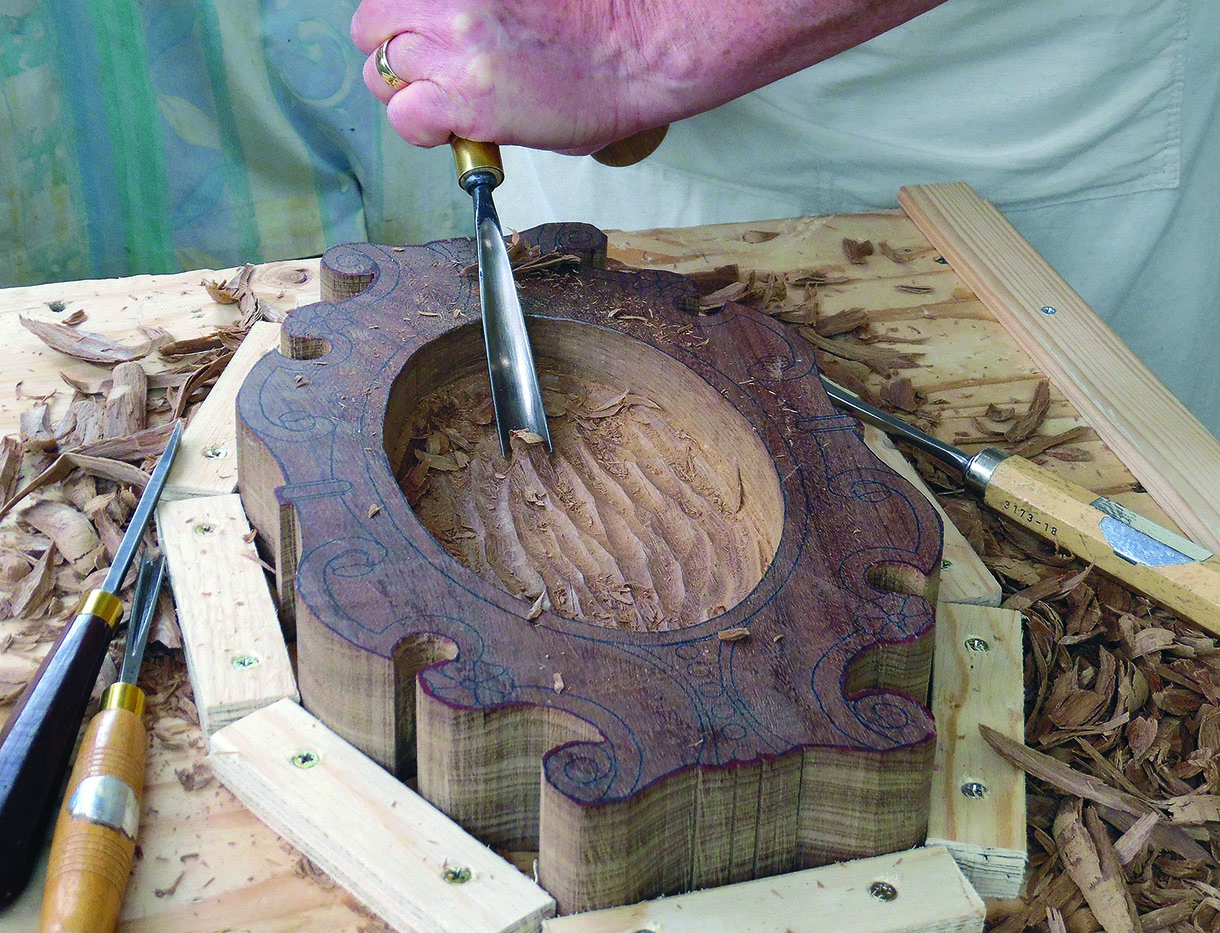 4. Now use a large curved gouge to hollow out the middle of the oval, taking care to leave at least 13mm thickness in the base at this stage. ‘Bost’ down vertically at the edges after you clear away wood from inside 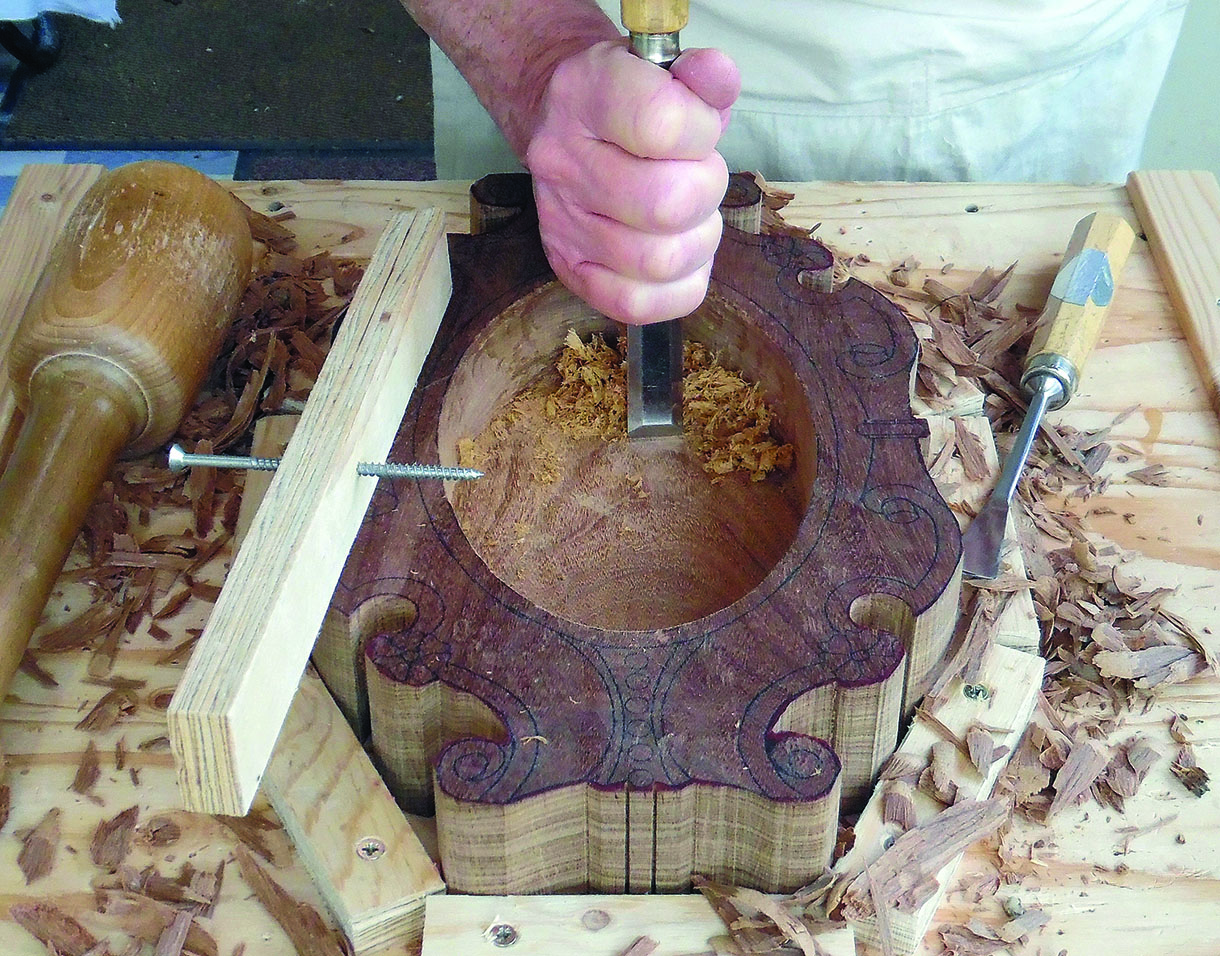 5. To ensure you don’t go too deep, make a depth gauge with a screw protruding through a flat piece of wood to the required depth. Level out the ‘floor’ of the tray by scraping with a flat chisel when the base thickness is around 13mm 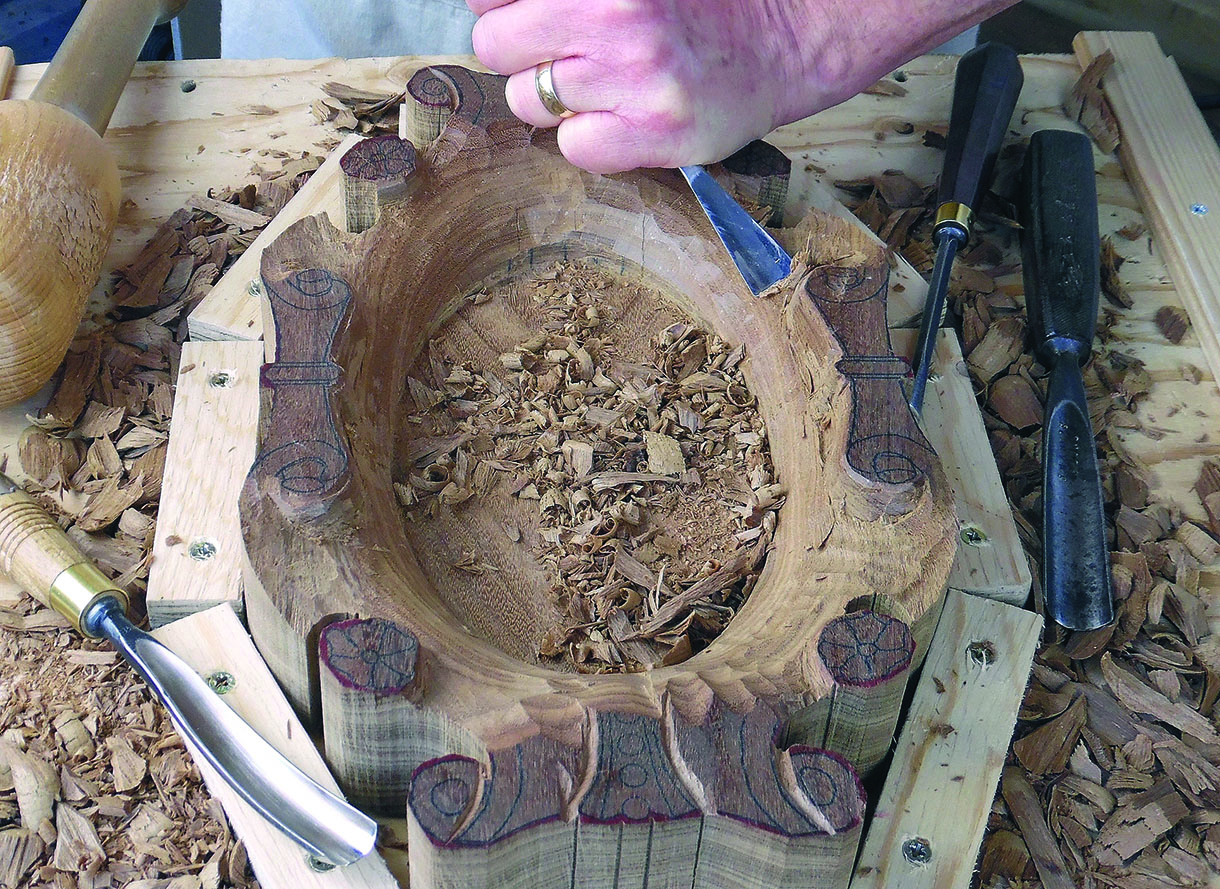 6. With the oval hollowed to shape and depth, rough out the inward-sloping sides of the cartouche, leaving the side scrolls, end scrolls and flowers untouched for now. Proceed carefully to get a feel for the elegant flow of the curves as you work down. Don’t remove wood you may need later 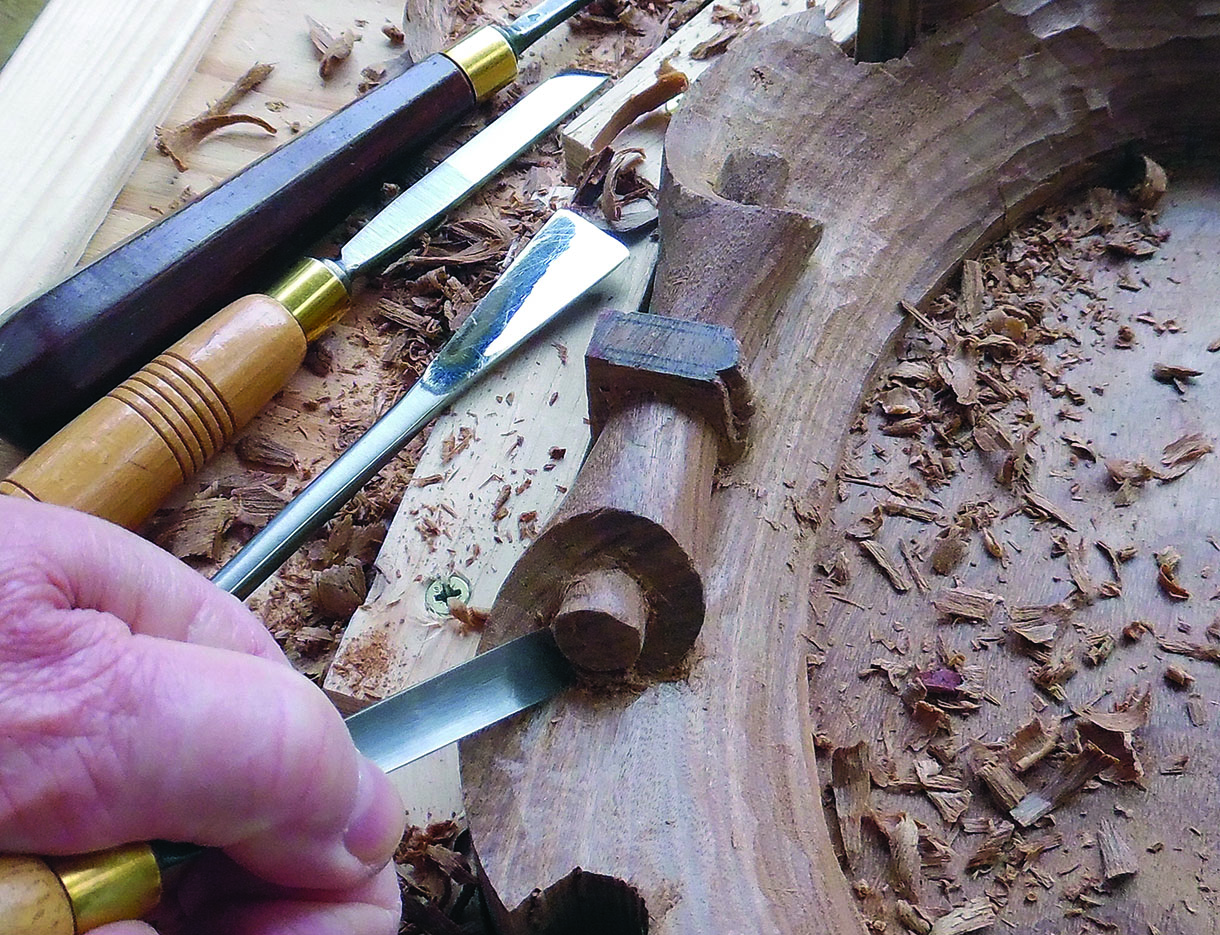 7. Now proceed to the side scrolls. Very carefully carve them into a flowing ‘roll’ shape that is narrower in the middle with a ‘band’ around the centre. The ends must show the protruding spiral of the volutes. Keep a smooth flow to all the curves, and shape the outside of the scroll into the outside of the cartouche 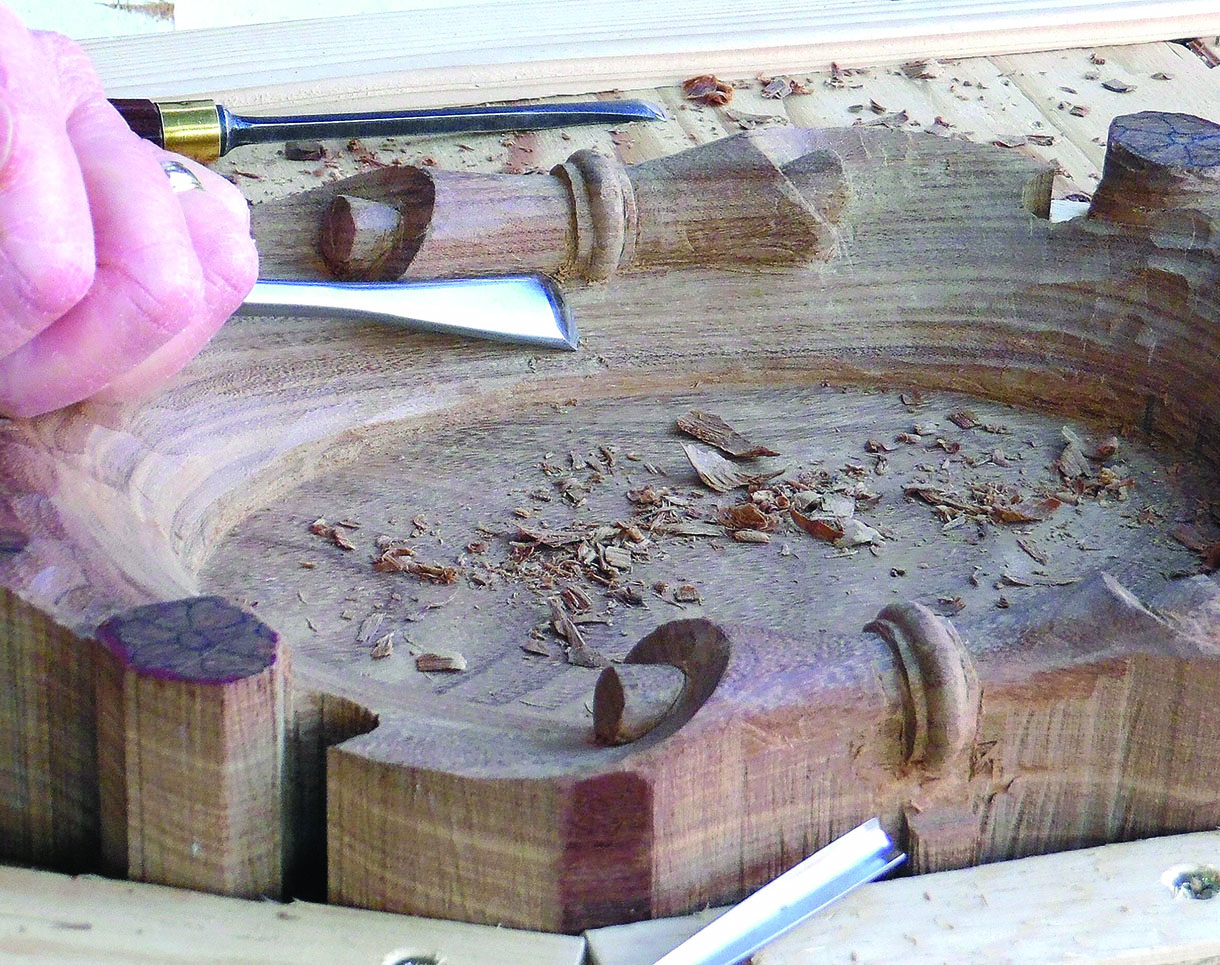 8. Carve a bead and filet on the ‘bands’ wrapping around the scrolls. Undercut the scrolls and shape the inner sides of the cartouche under them 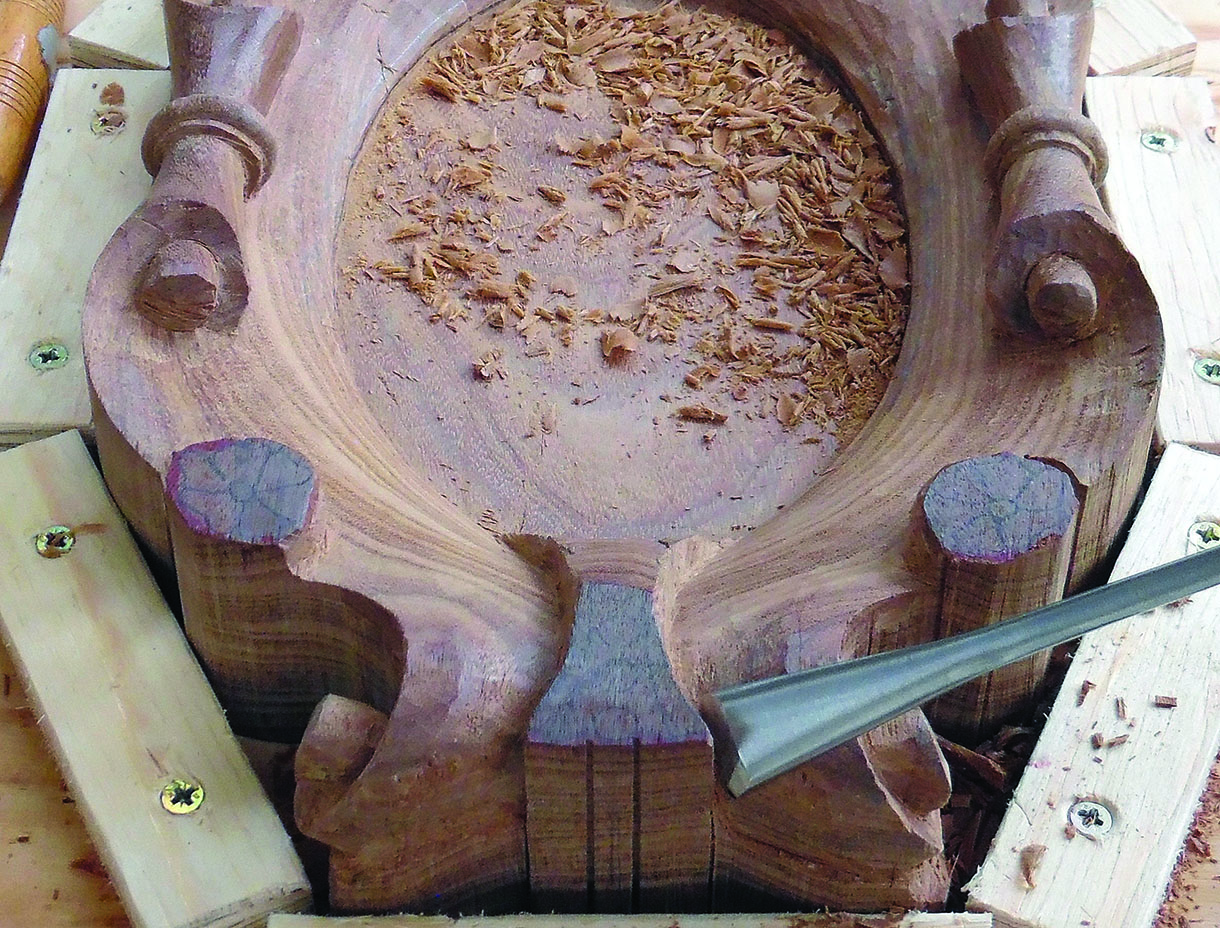 9. Move on to the end scrolls, which curl away from the oval and under the outside of the tray, forming handles. Shape the scroll into the sides of the cartouche. Leave the raised section in the middle of the scroll to form the ridge and ‘pellets’ later 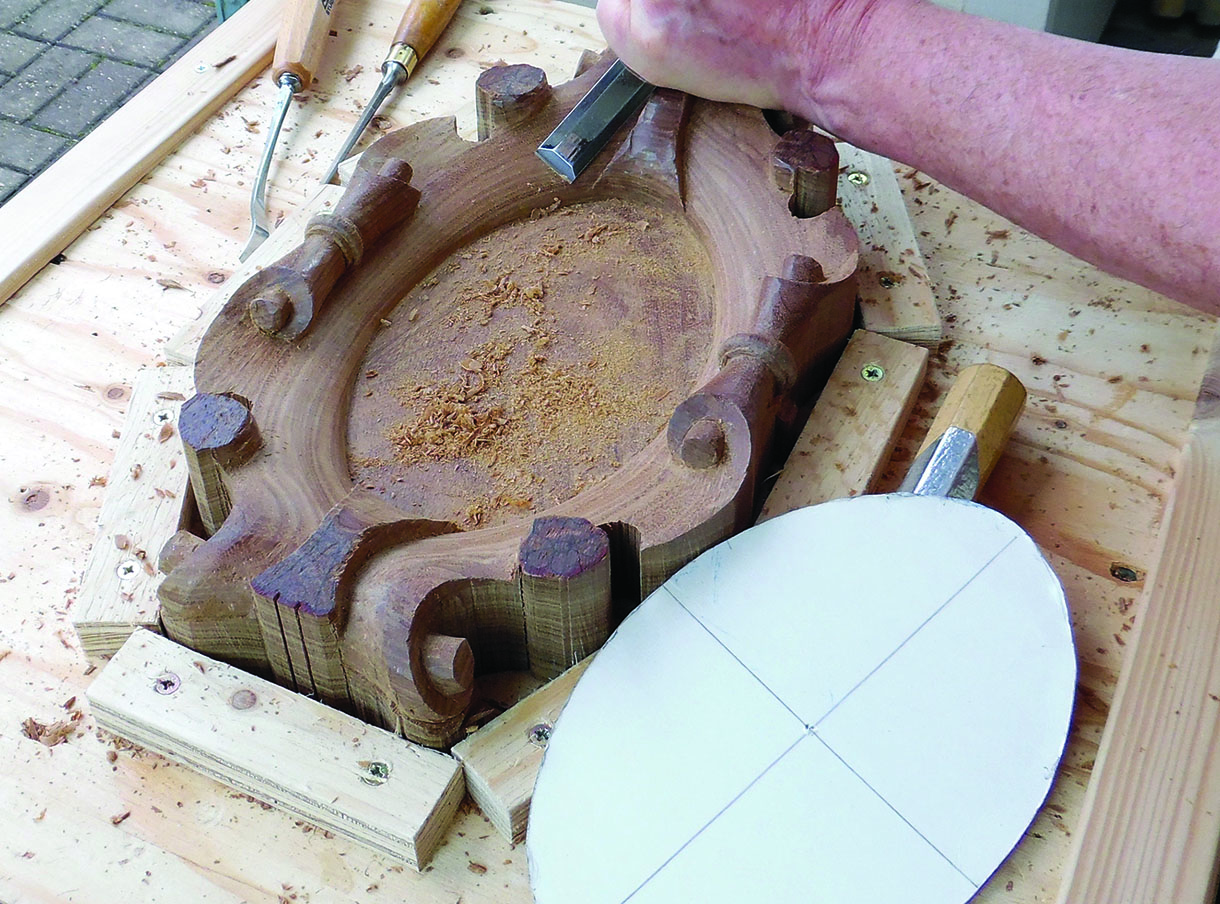 10. Before carving the final details, refine the shape of the central oval, using the template as a guide. Then refine the inner sides of the cartouche so they curve smoothly down to make a clean edge with the oval. Create a smooth and elegant flow along the outer edge of the cartouche, dipping down from the side and end scrolls around the four flowers and the semi-circular ‘eyes’ 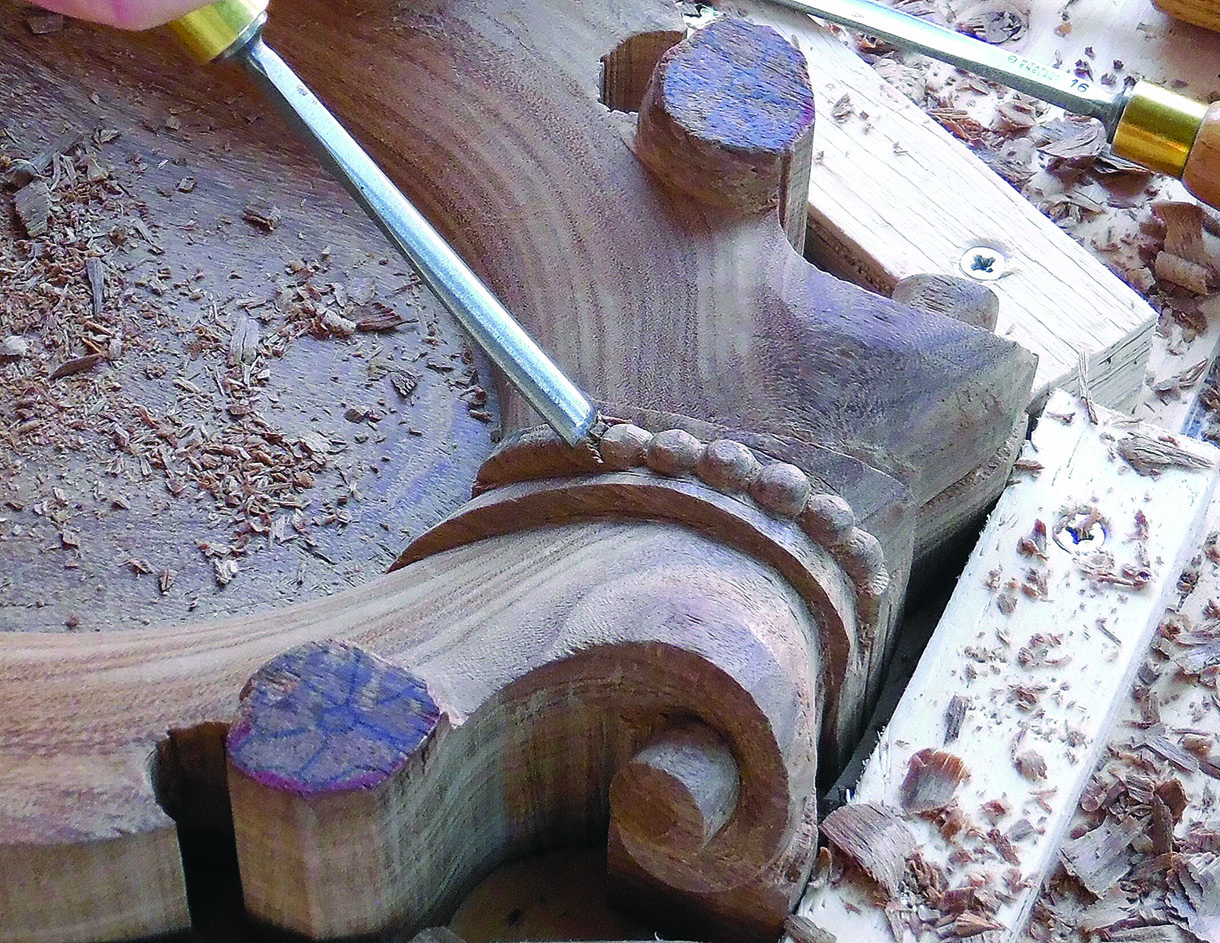 11. Now return to the end scrolls and carefully carve the detail on the central ridge. Carve an 8mm bead along the middle, then cut the bead up into individual semi-spherical ‘pellets’ with a No.8, 8mm gouge, taking care not to break any out 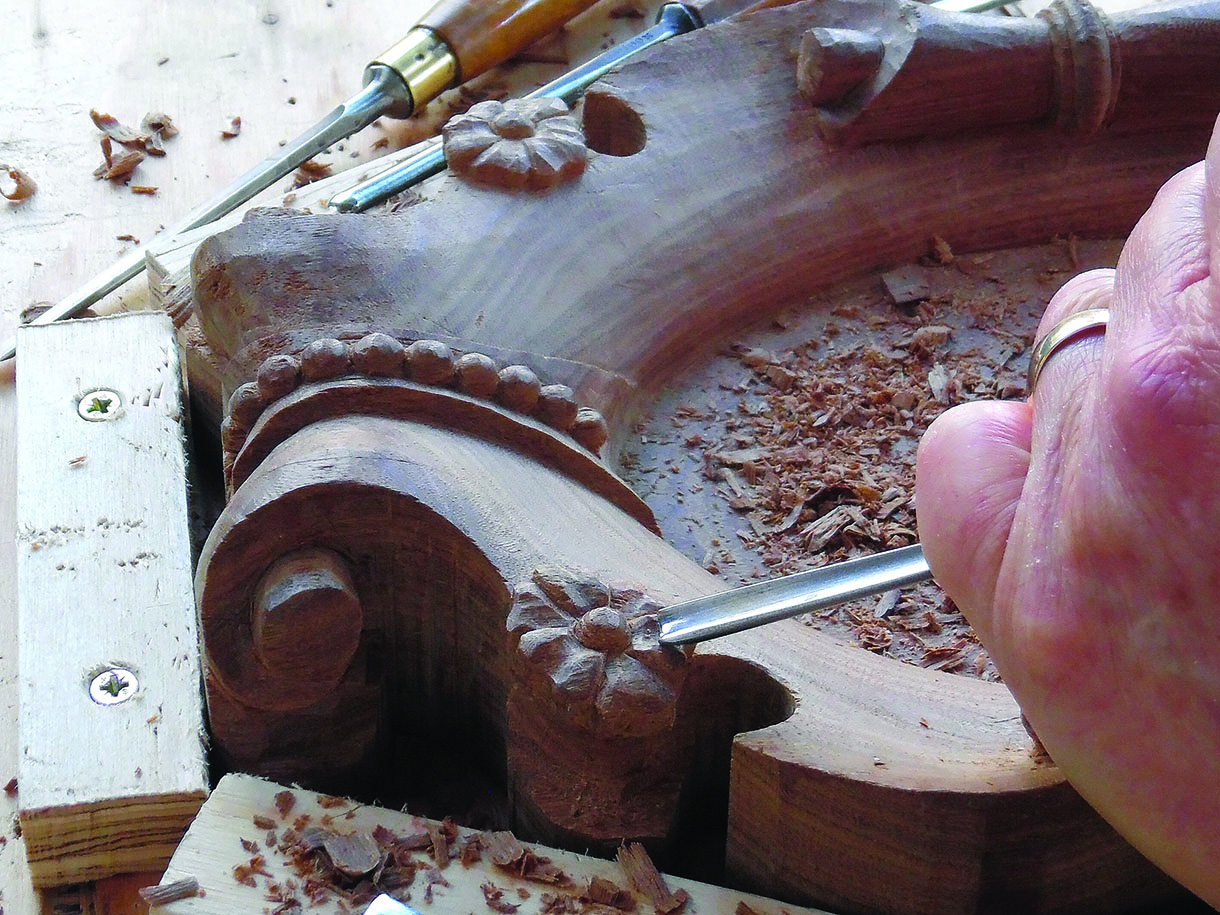 12. Next, carve the small flowers, making sure all four are at the same height above the backing board. Make them sit neat and shallow on the sides of the cartouche. The petals that protrude beyond the edge should be finished with a slightly rounded edge about 6mm thick 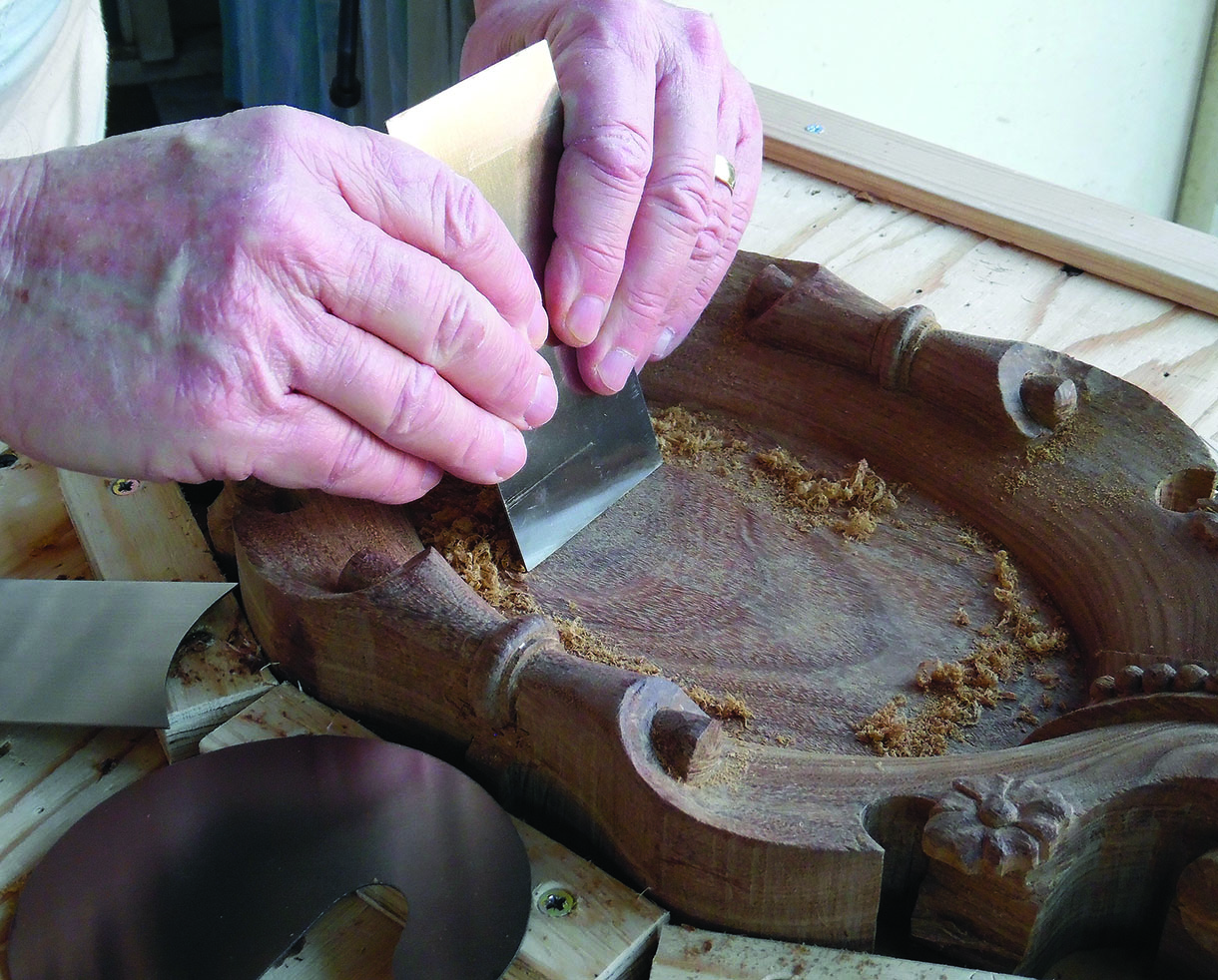 13. Scrape the oval floor to a fine flat surface, using a flat cabinet scraper. Also use flat and curved cabinet scrapers to create a smooth finish on the inner sides of the cartouche 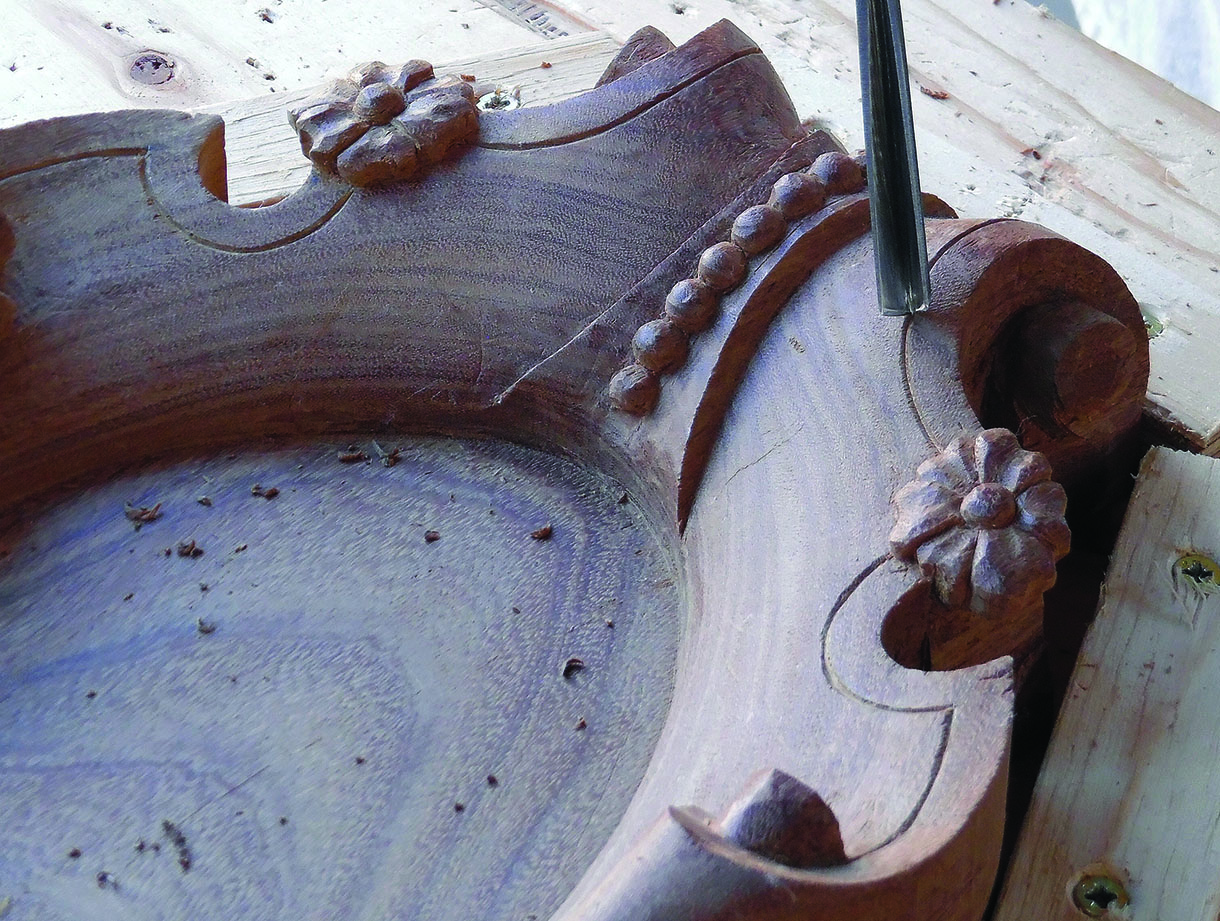 14. Tidy up the outer rim of the cartouche, then draw a narrow border 8mm wide inside the outer edge flowing from the side scrolls. Use a sharp V-tool to cut a V-line along the border, making sure it is very neat 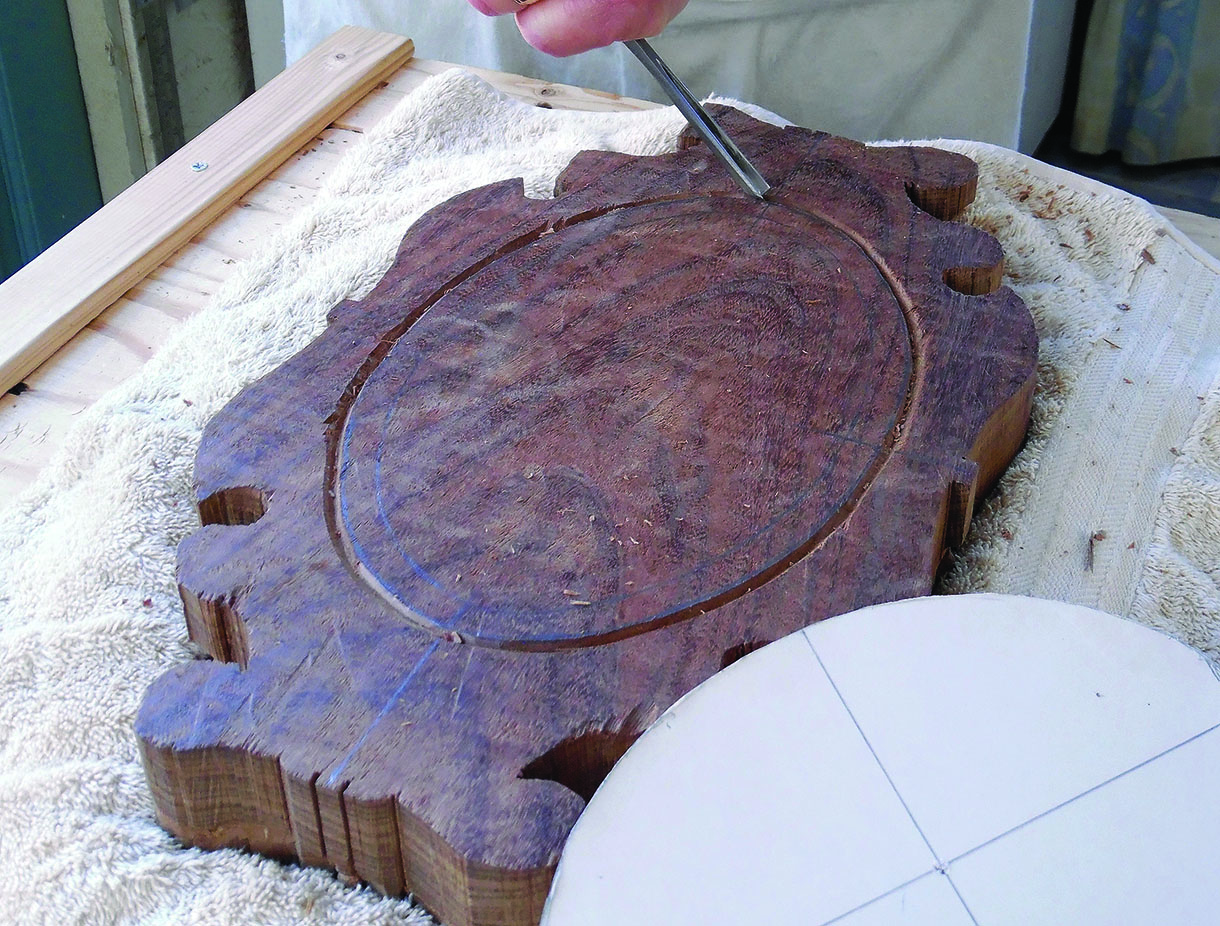 15. Turn the carving upside down within the wooden blocks on the backing board, with some soft material to protect the carved surfaces. Use the oval card template to draw the position of the inner ‘floor’ on the underside of the tray, then draw another oval 10mm outside this to mark the base of the tray. Cut round it with the V-tool 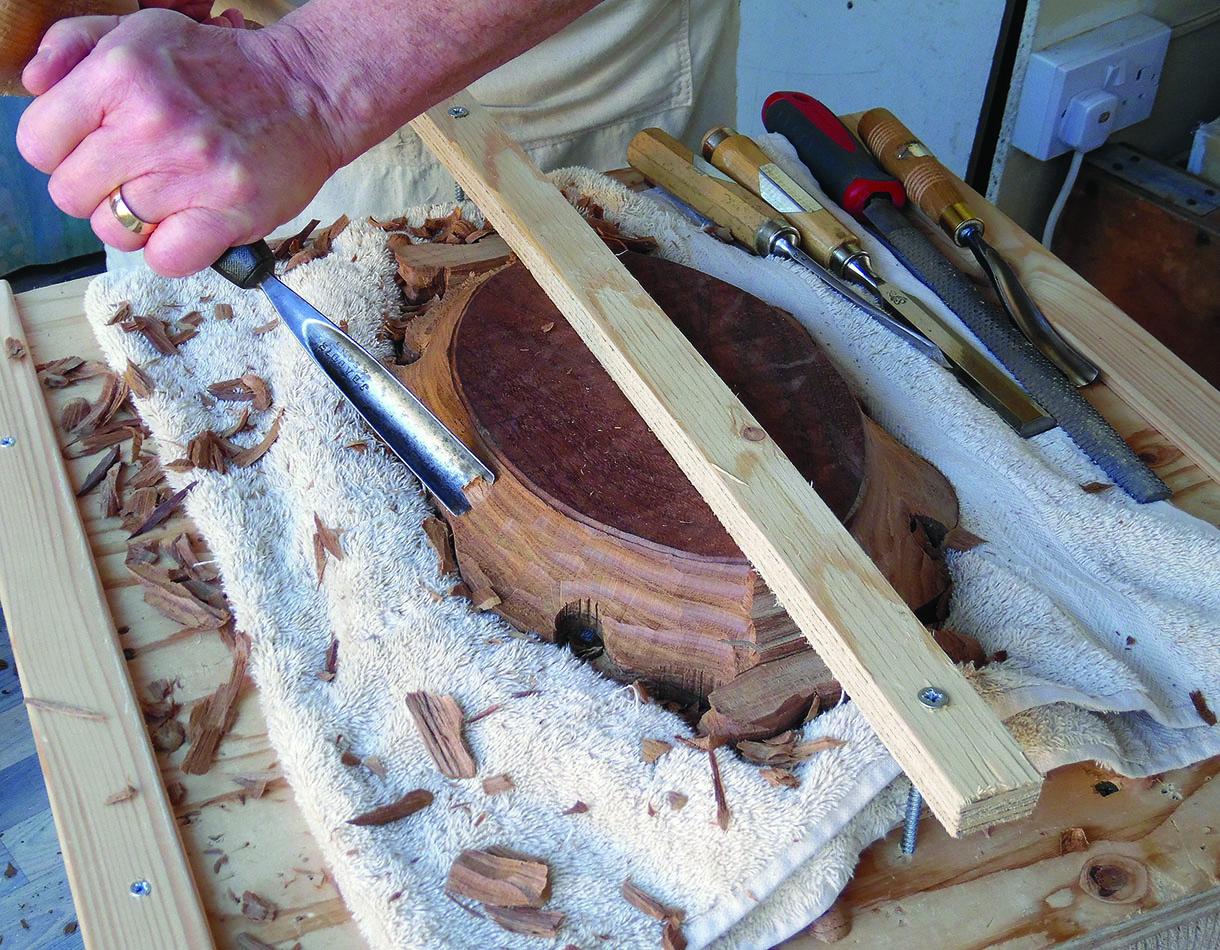 16. Now carve the outer sides of the tray following the contours of the inside to a thickness of around 8mm. Avoid putting too much pressure on the tray, and use saws to remove some of the end-grain wood first (Note the batten screwed down to hold the work still) 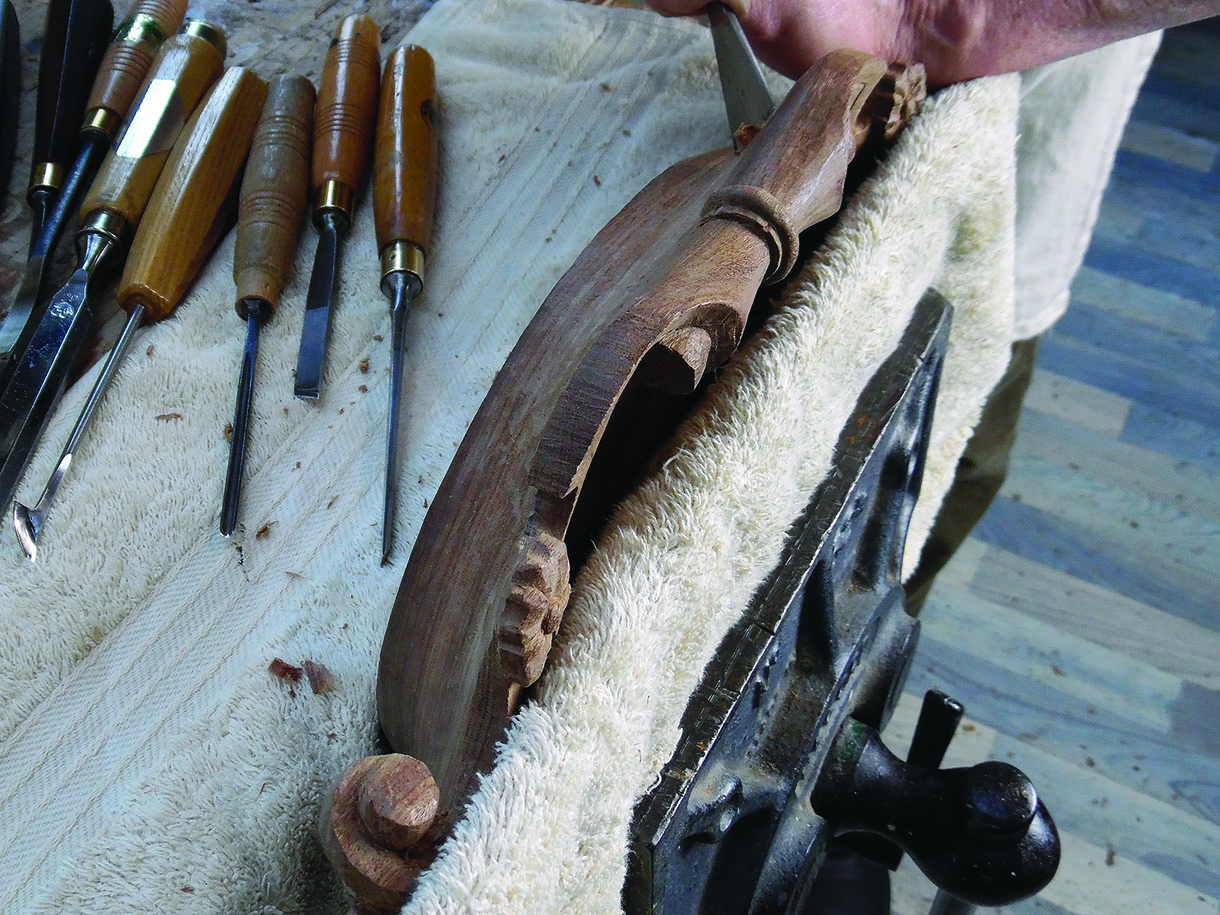 17. Mould the side and end scrolls neatly into the outside of the tray. Preferably hold the work in a bench vice protected by boards and padding to get at the sides 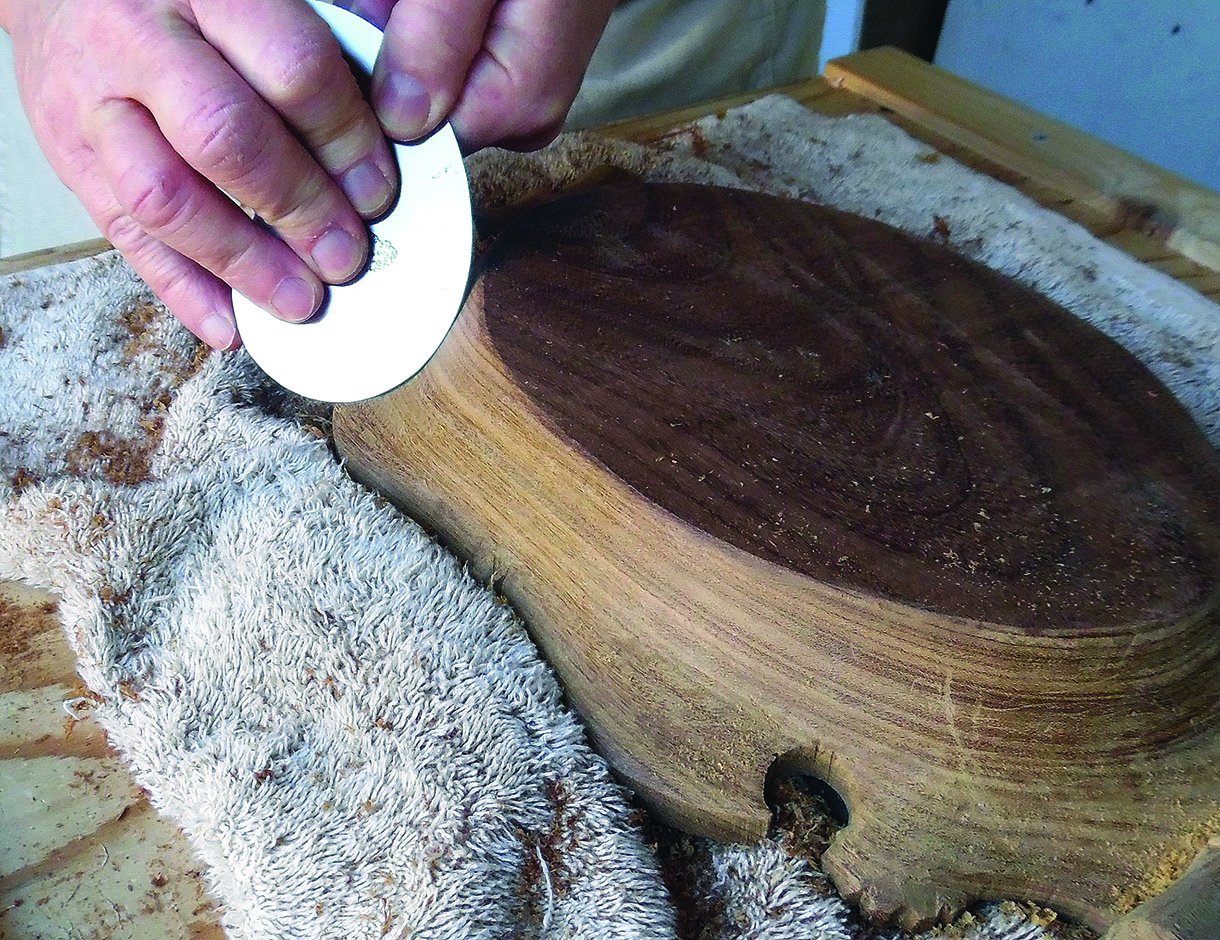 18. Finally, use the cabinet scrapers to work the base and outside surface to a smooth finish

19. The carving phase is now finished. The French polish will show every irregularity in the surface, so get the best possible finish you can with the scrapers then use fine abrasives to refine the surface without dulling the edges. Here you can see the finished carving 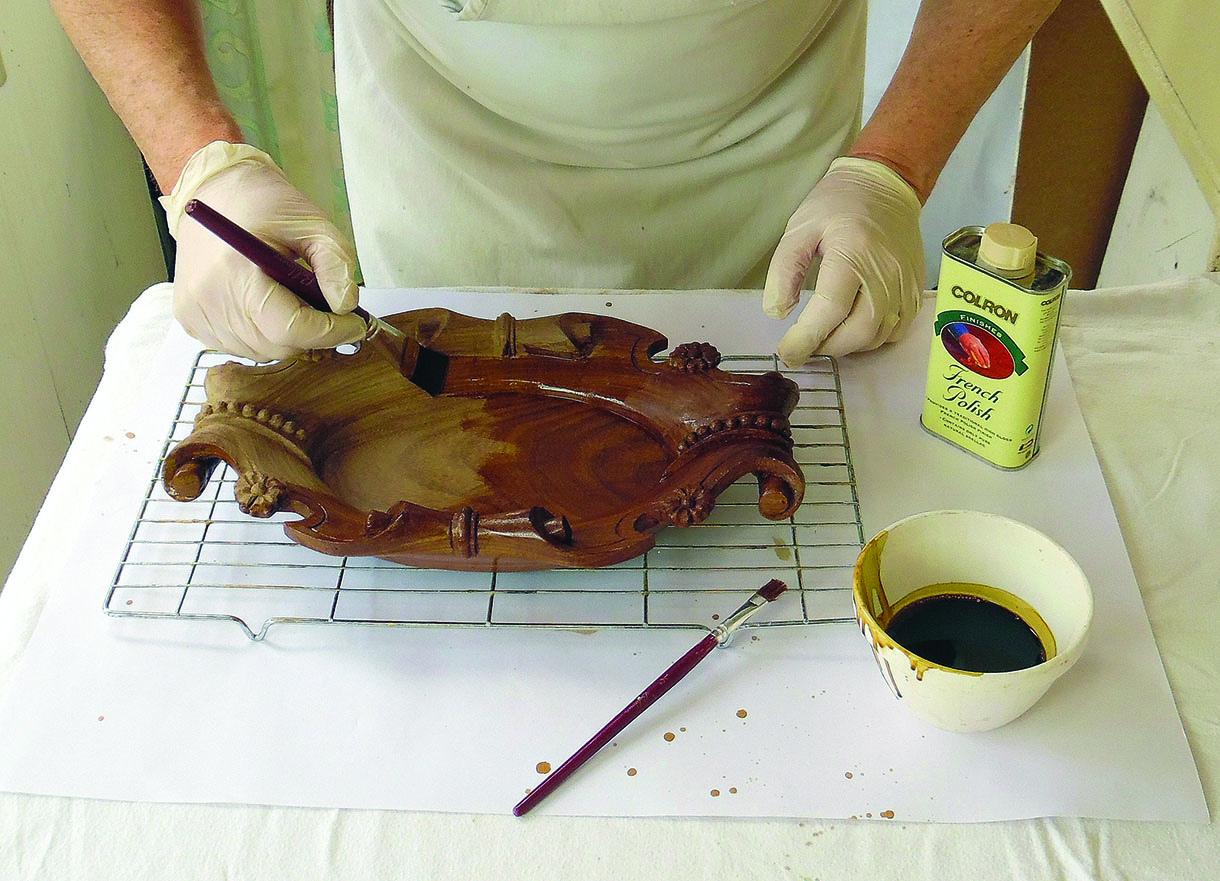 20. French polish is a traditional finish for mahogany-type woods. Apply the first coat thinly to the bare wood with a fine, soft brush, working fast as it dries in seconds. Avoid going over the same bit twice and don’t let puddles form. Leave the first coat to harden overnight, give it a light sanding with 400-grit abrasive, then apply one or two more coats giving each one an hour or more to harden. Wash your brushes in methylated spirit 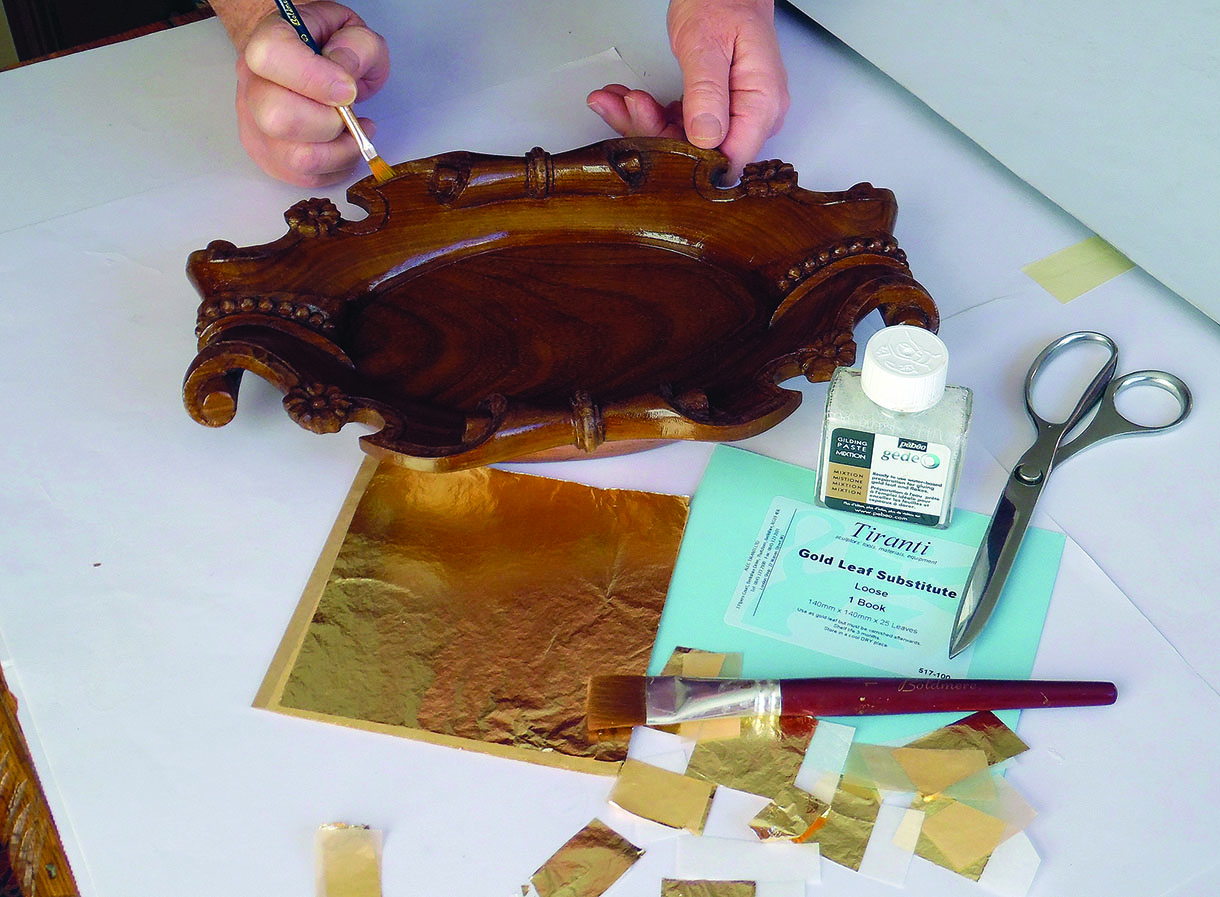 21. Now for the final touch – the gilding on the border of the cartouche, the bead in the side scrolls and the round ‘pellets’ in the end scrolls. Get some imitation gold leaf, sold quite cheaply in most art stores, and also some gilding size, a brush to put it on with and a soft brush to press down the leaf. Apply some gilding size thinly to the areas to be gilded – the leaf will stick exactly where you put the size, so apply it carefully. Leave it about 10 minutes until it is dry but slightly tacky to the touch 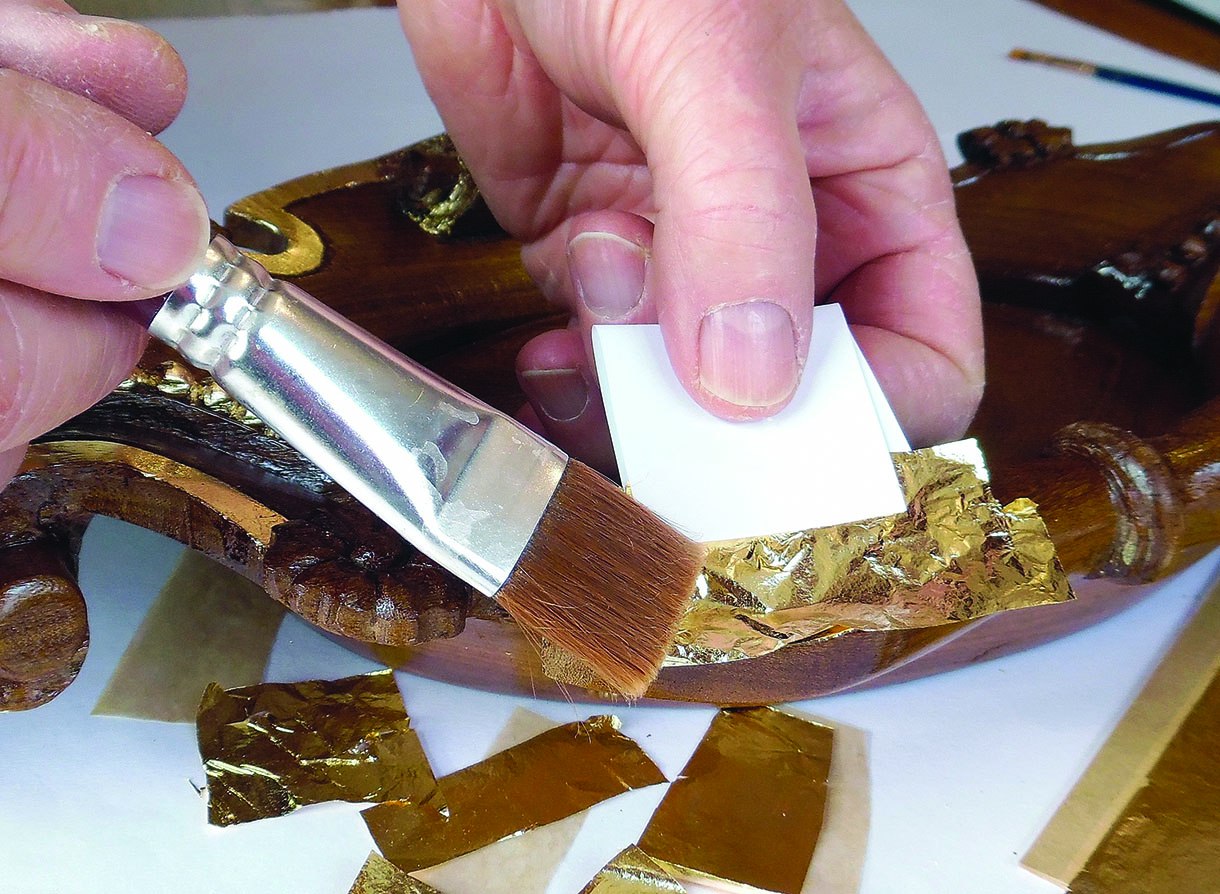 22. Use a folded piece of paper to pick up a piece of gold leaf, then slowly and carefully place it over the sized area. Press it down gently with a soft brush, and brush away any loose pieces of leaf. Continue over the whole area, and go over any gaps with more size and more leaf. To get a clean sharp edge to the gilding, remove any gold that strays outside the gilded area by lifting it off with sticky tape or rubbing it away gently with fine abrasive

23. The imitation gold leaf needs a sealer to stop it tarnishing, so give the whole carving a final coat of French polish, covering the gold as well. Finally, buff it up to a soft shine with a dry cloth, and it should look like this