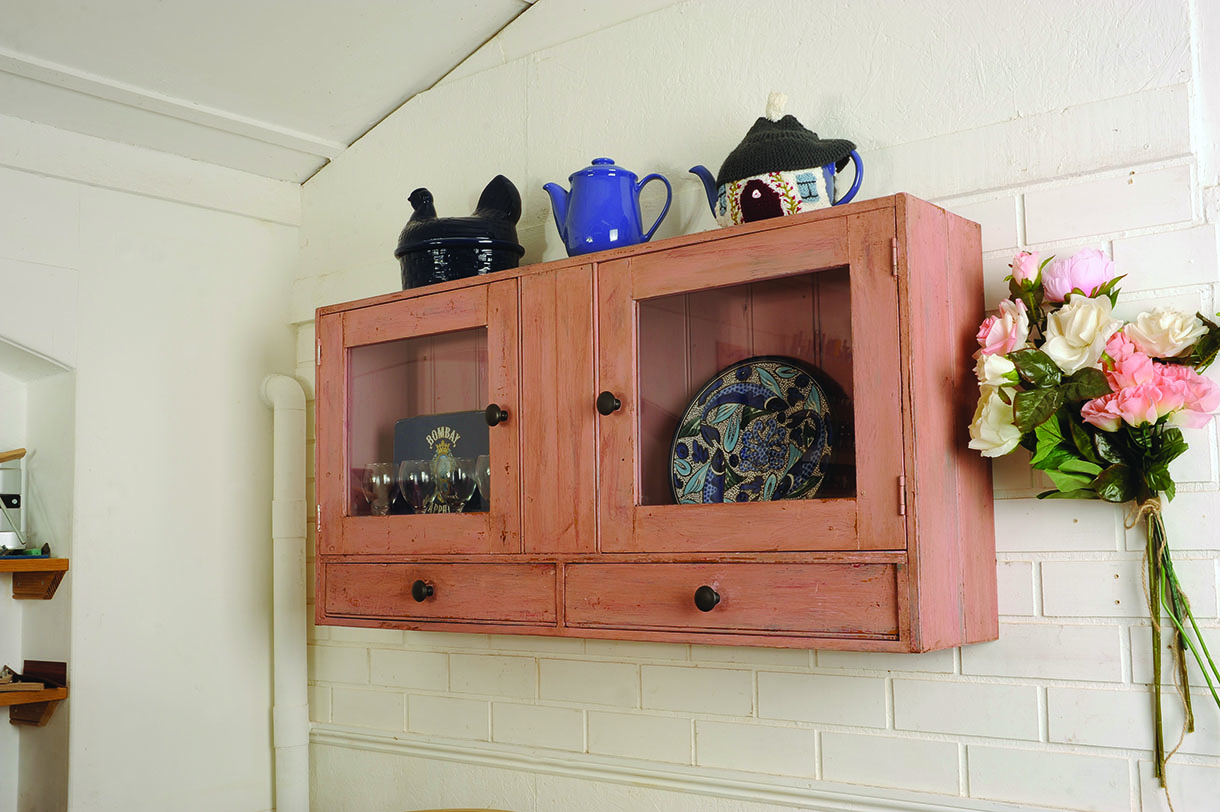 From plain shabby to ‘shabby chic’

I had the offer of some free-to-use pine tongue and groove bead board, in the form of a large, lumpy, indescribable piece of furniture. I love re-using wood and this was a perfect excuse. Date-wise, it was probably from about 35 years ago, when it would have been fashionable. Right now, it looked ugly; it was held together with old-fashioned cut nails, wire nails with narrow heads and plenty of old screws with narrow slotted heads. Once I started to cut it apart and de-nail it, the hidden surfaces looked quite ‘bright’, it was a slow operation as I wanted to avoid major damage. My best guess was that it had been made from old ‘wainscotting’, used to clad the walls of an old school or village hall, hence one face being relatively clean.

1. This monstrosity wasn’t going to give up in a hurry but I didn’t want to tear the pine TGV (tongue, groove and vee) to pieces and render it unusable. It was essential to lever it apart carefully as it was held tight with rusted nails 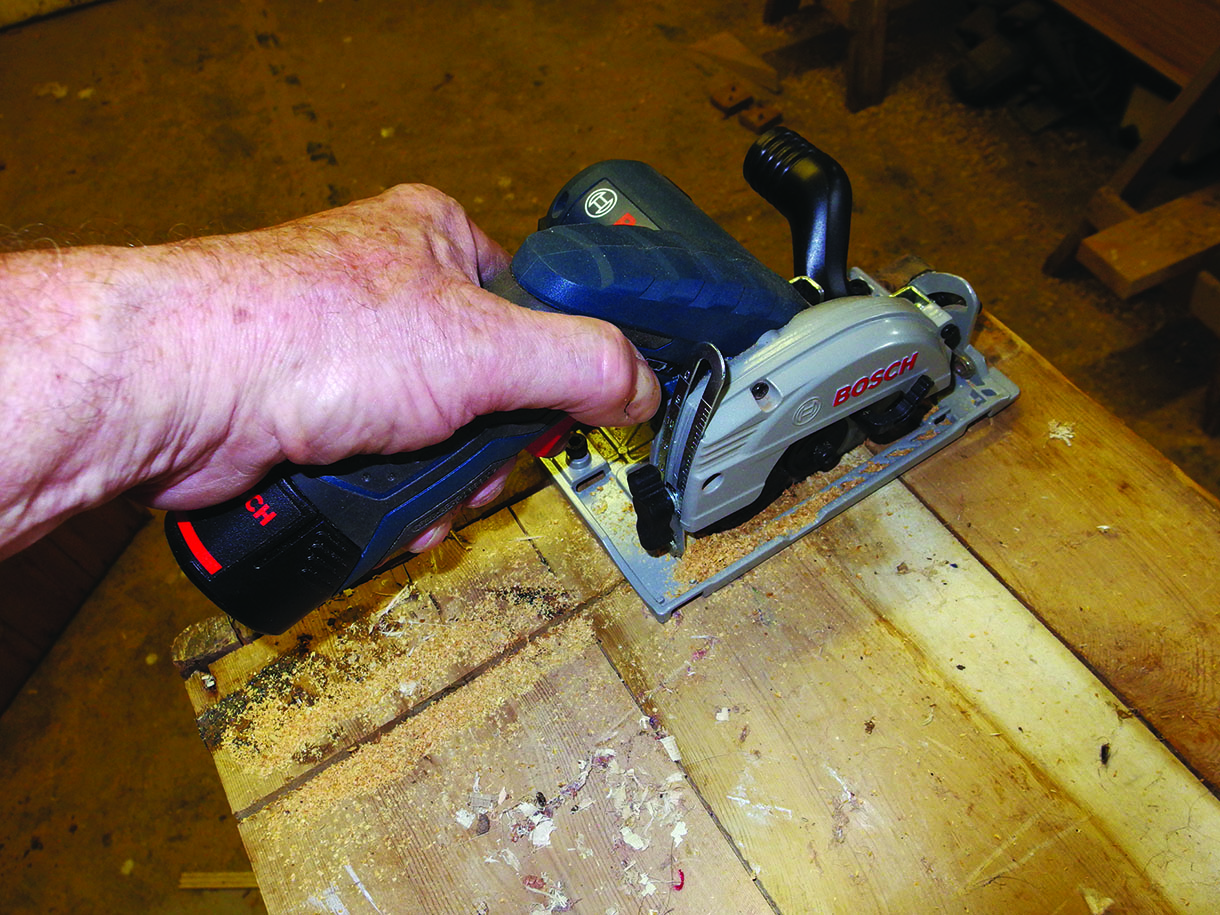 2. A couple of quick cuts helped separate the main carcass sections while avoiding blade-wrecking nails. After that, I managed to force the boards apart and then knock out all the nails 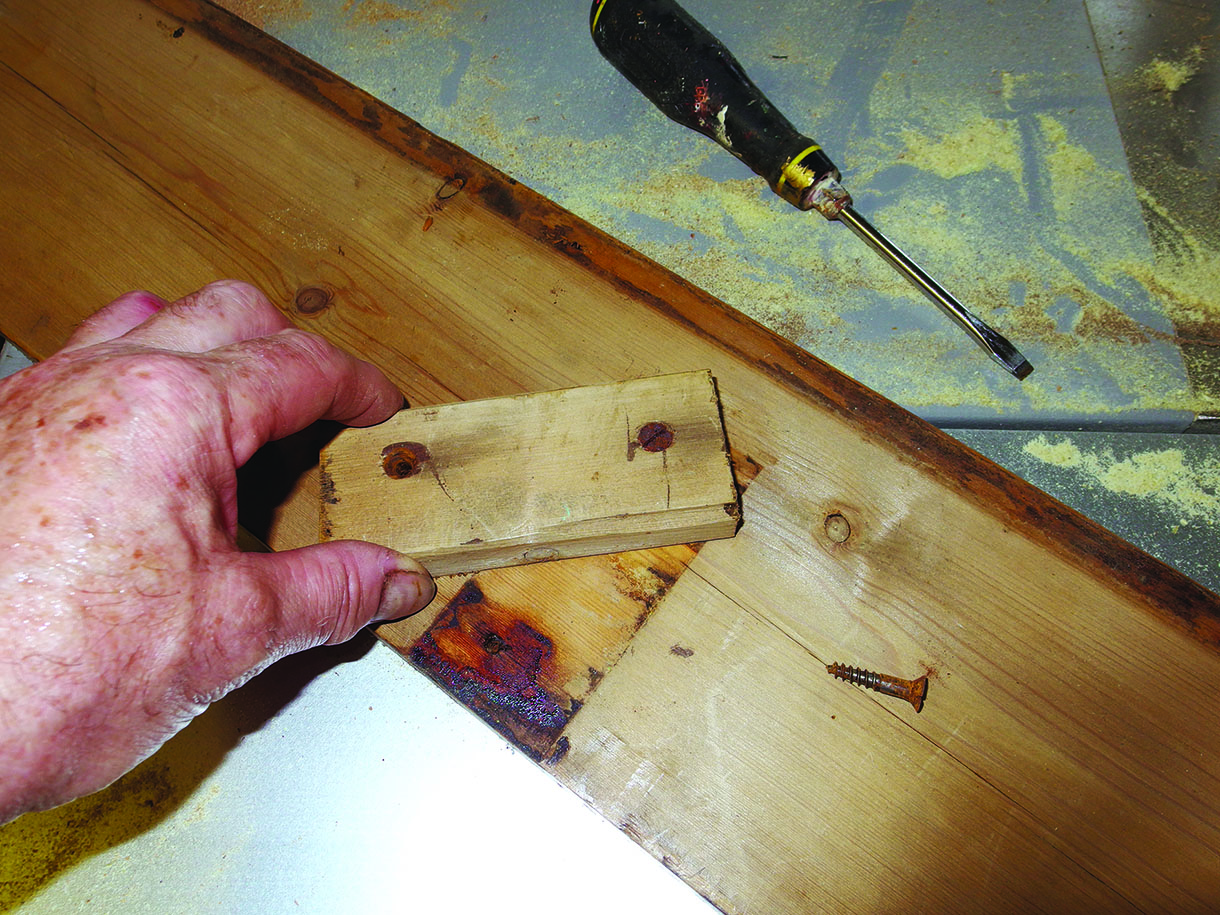 3. Various straps had been screwed in place and were not always keen to come out. It proved easier to undo one screw first then rotate the strap to undo the other screw 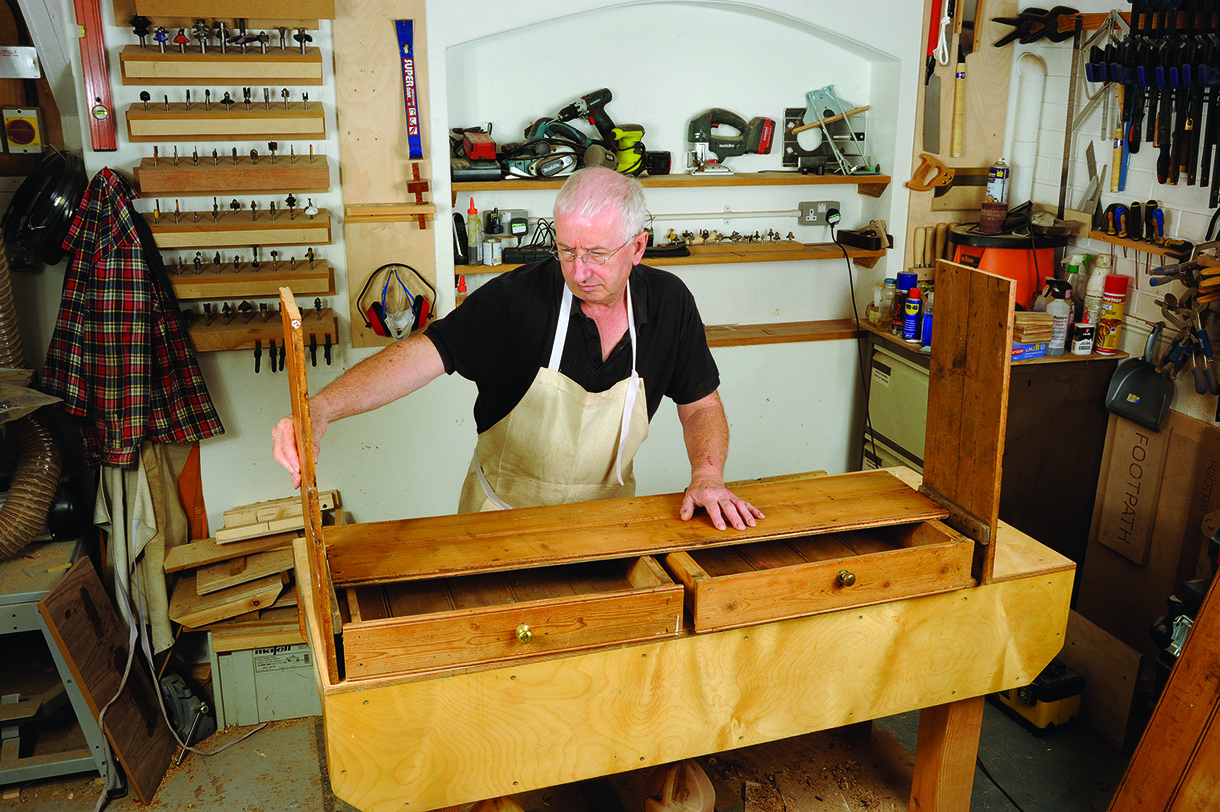 4. I started cutting paired boards to length as a plan developed in my mind. It was to be a wall cupboard whose width was determined by the width of the original drawers 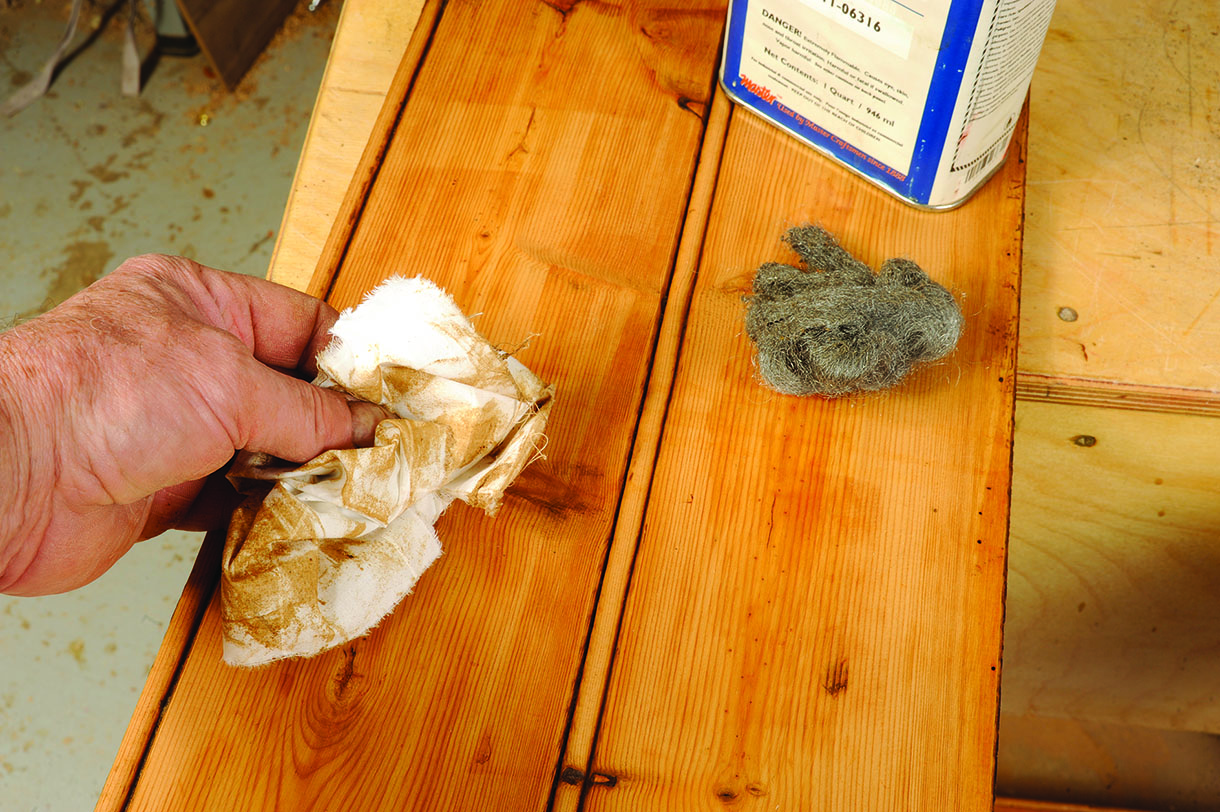 5. Having cut all the key components, of which there were quite a few, I then needed to de-wax the boards using a wax solvent cleaning agent. A lot of old wax and dirt came off by using medium wirewool to scrub the surfaces with solvent 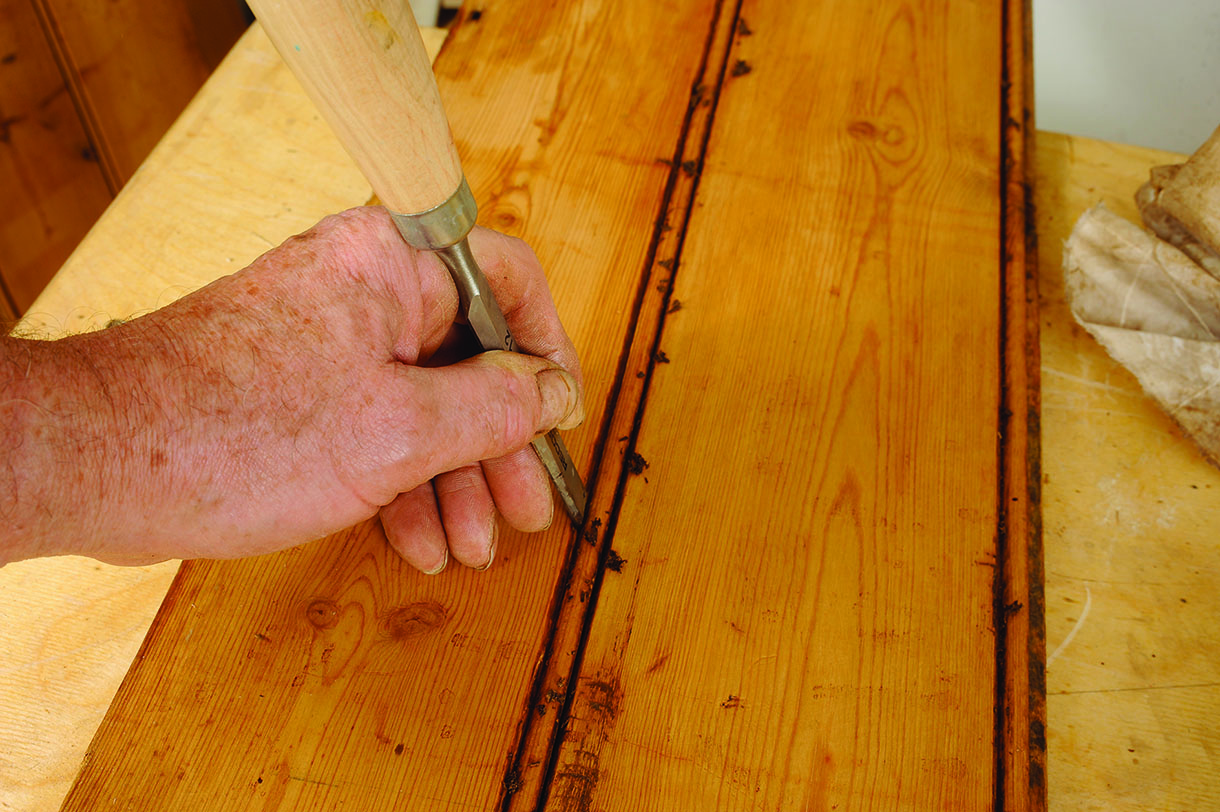 6. I dragged a chisel along all the gaps to remove yet more wax and dirt. It was worth it because I wanted a painted finish which had to stick properly, so a bare surface was essential 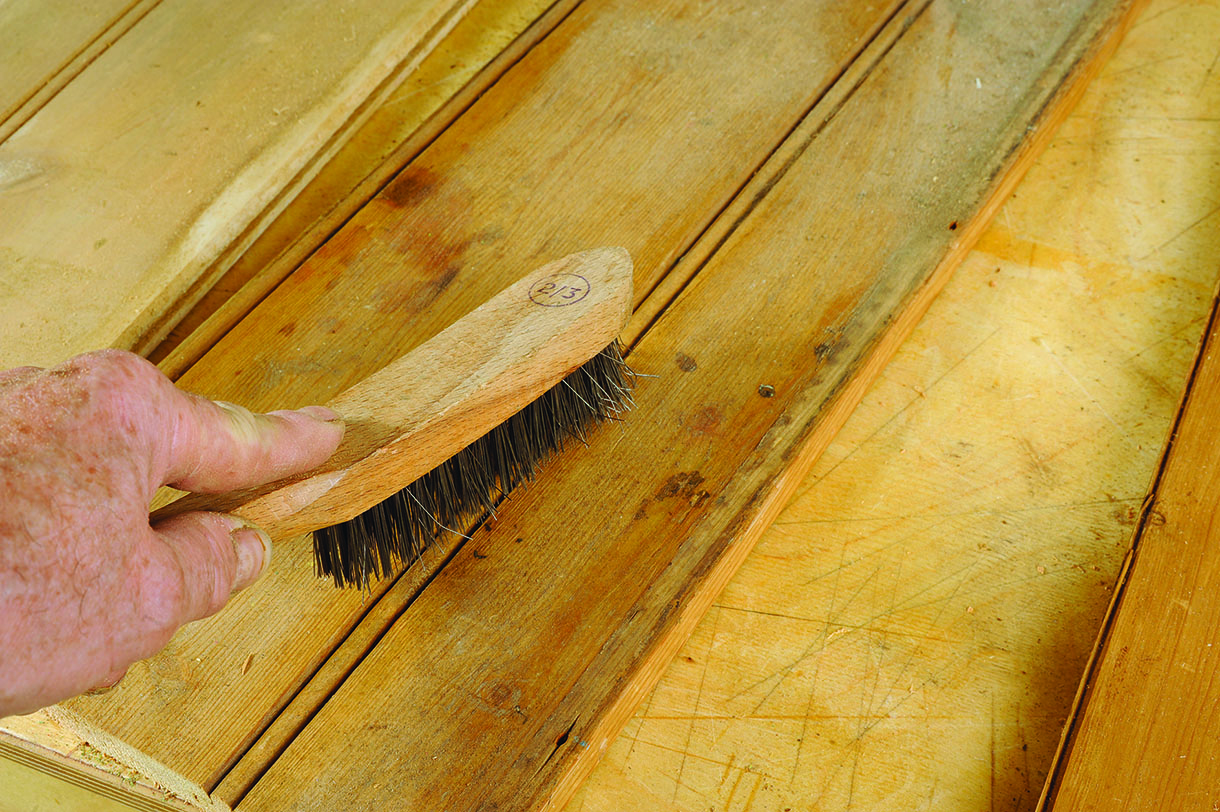 7. Wirebrushing helped clean the last of the aged accretions that lurked in the bead profiles. The effort would be repaid by more reliable finishing later on 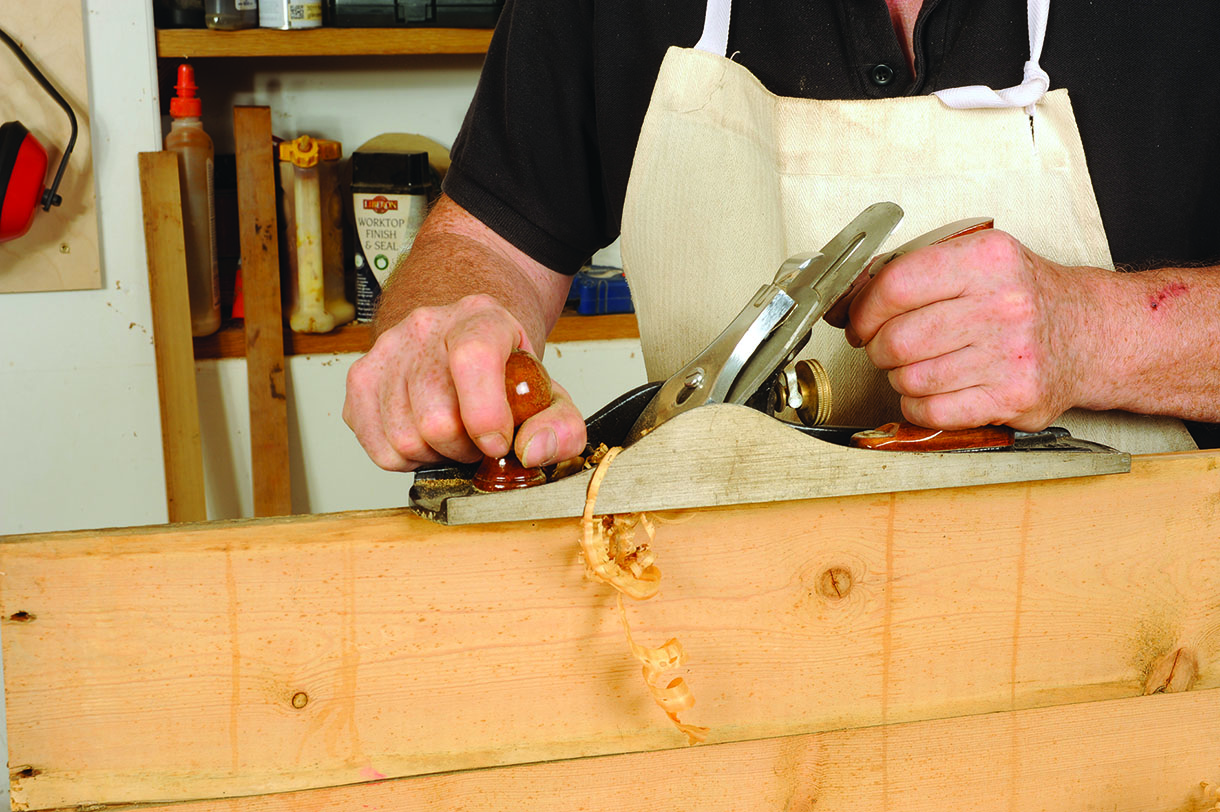 8. Where the broken tongues existed, these were soon trimmed off with a Japanese pullsaw and the edge flatted with a hand plane 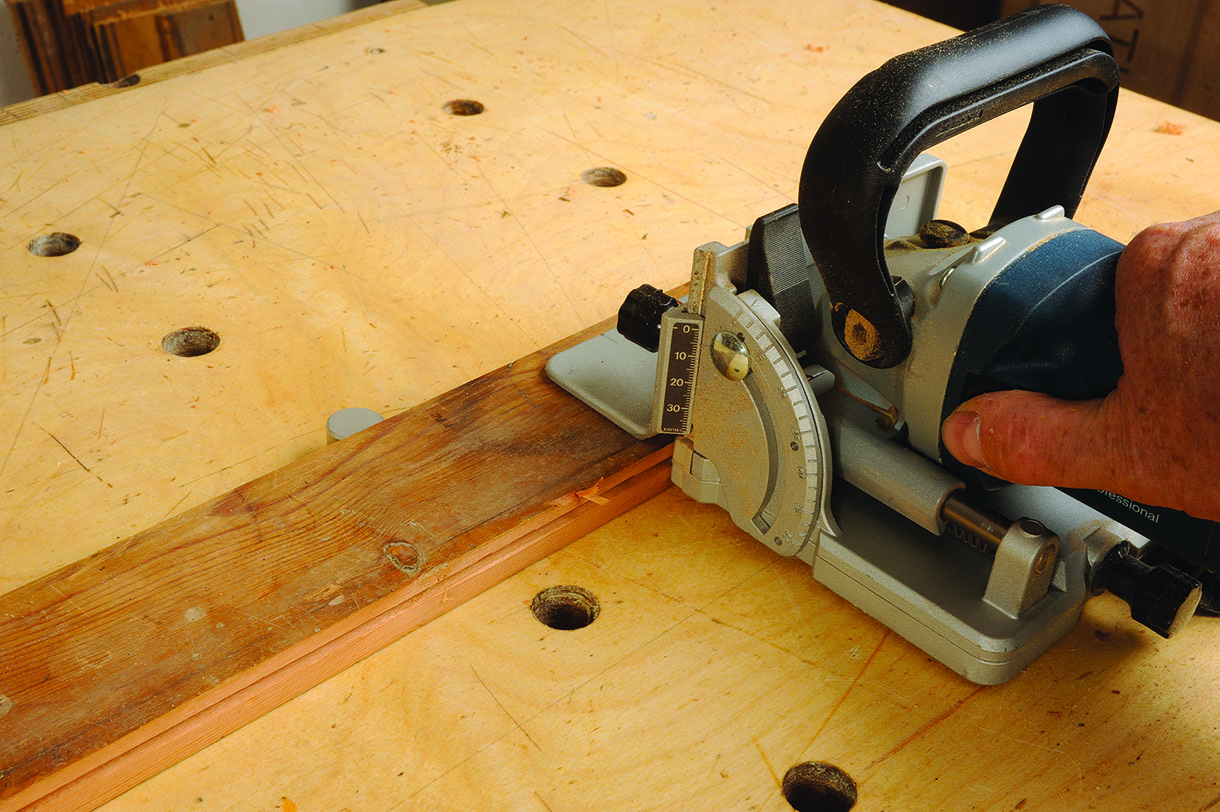 9. Most boards could still fit together but those that had ‘lost their tongue’ needed slotting for a loose tongue instead. The rubber facing was removed from the jointer so I could do a plunge-and-pull cut 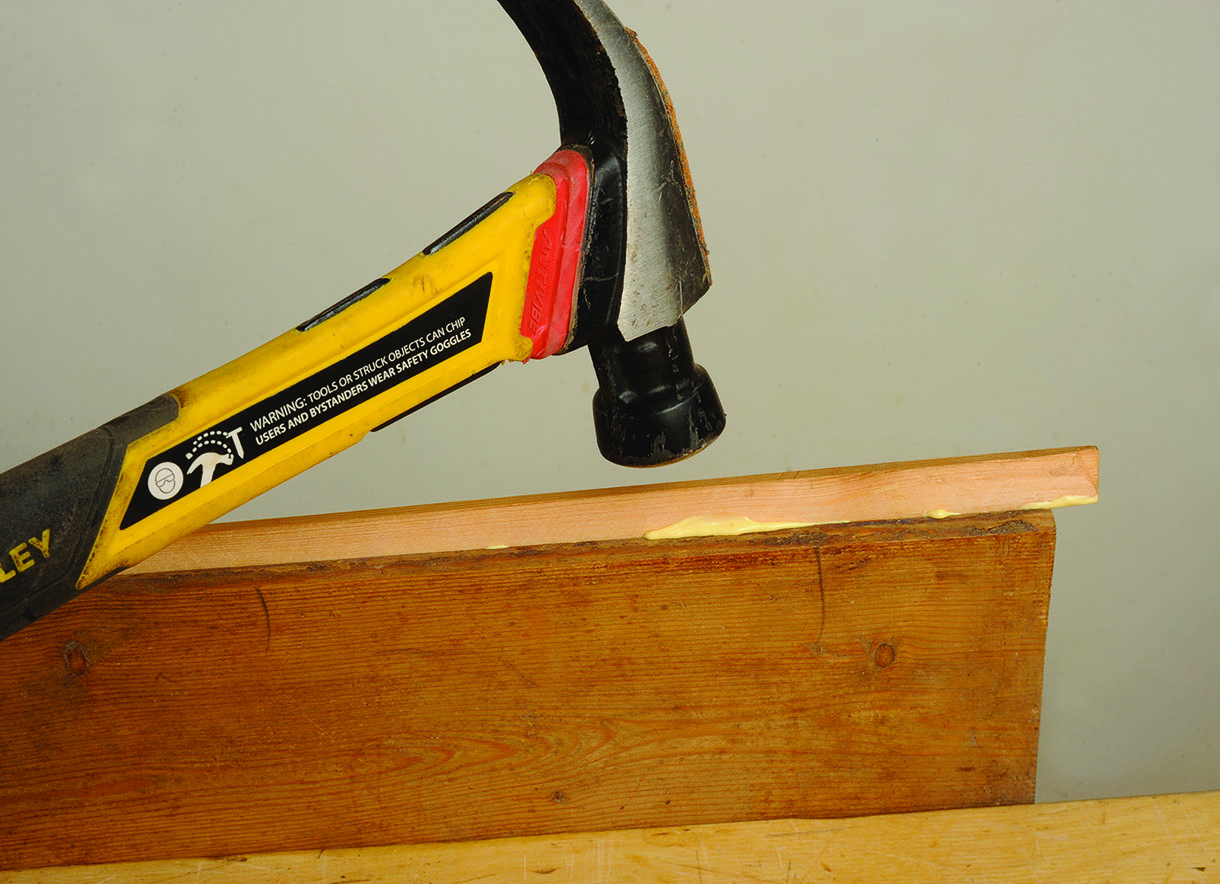 10. The loose tongues had glue added and then tapped into the slots. Modern aliphatic resin glue was suitable as this wasn’t an antique piece 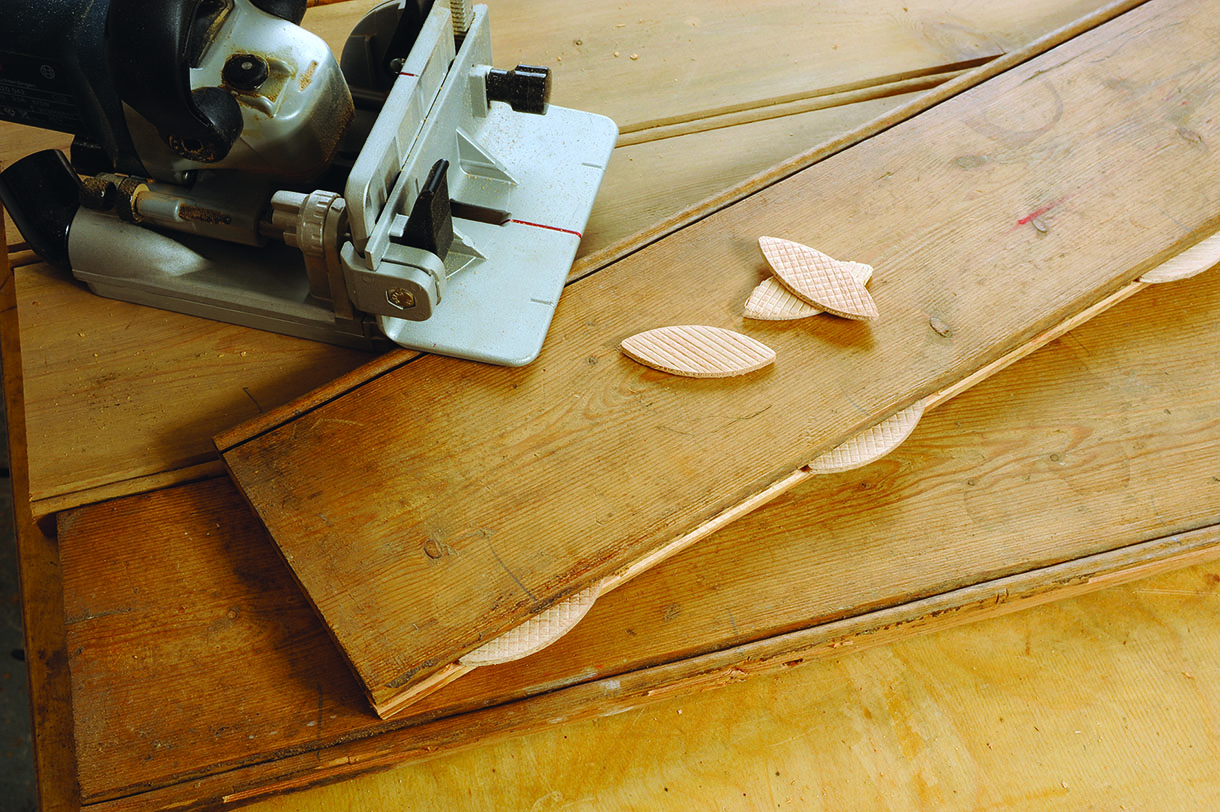 11. Where two blank edges met, I opted instead to use ‘dry’ biscuit jointing. This would allow free movement, although the pine was very dry and stable, unlikely to shrink further 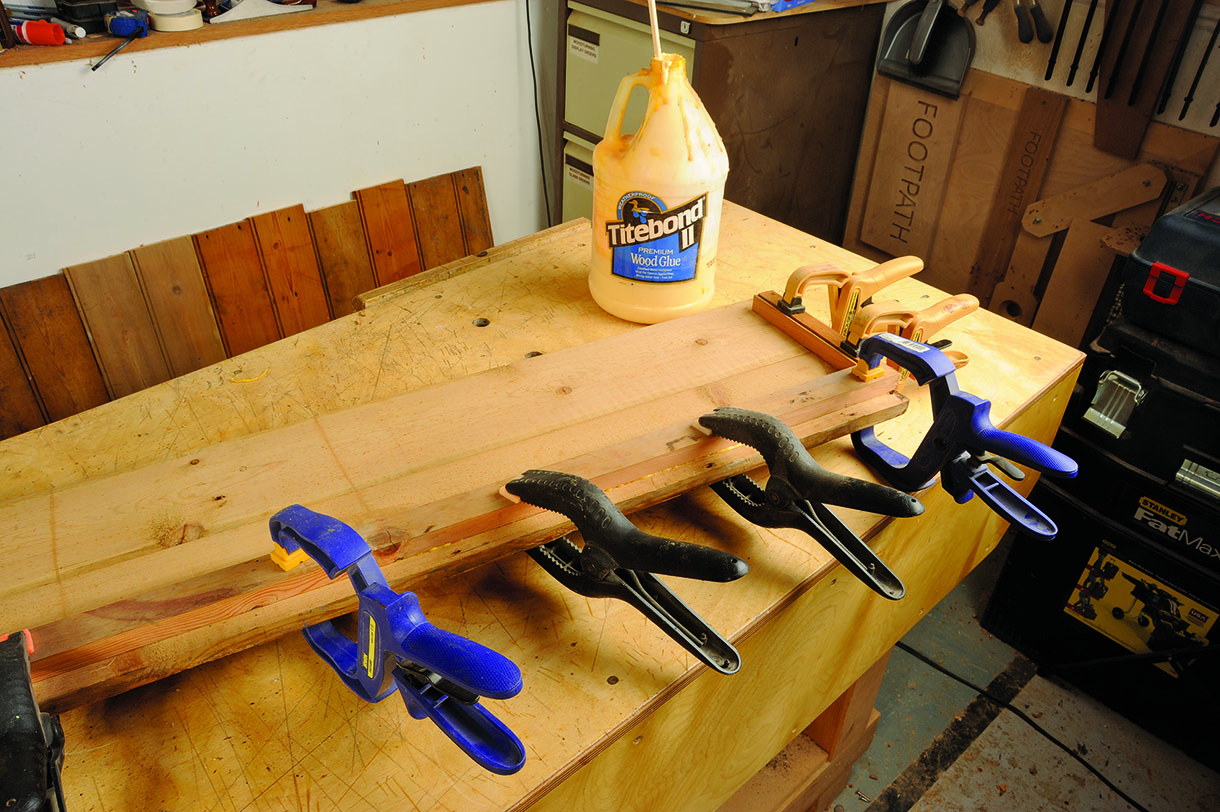 12. The carcass top had a batten glued on at the back and ends so the sides and back panel could fix to it. The lower boards would be screwed in the ends so there was no interference with the drawers caused by battens 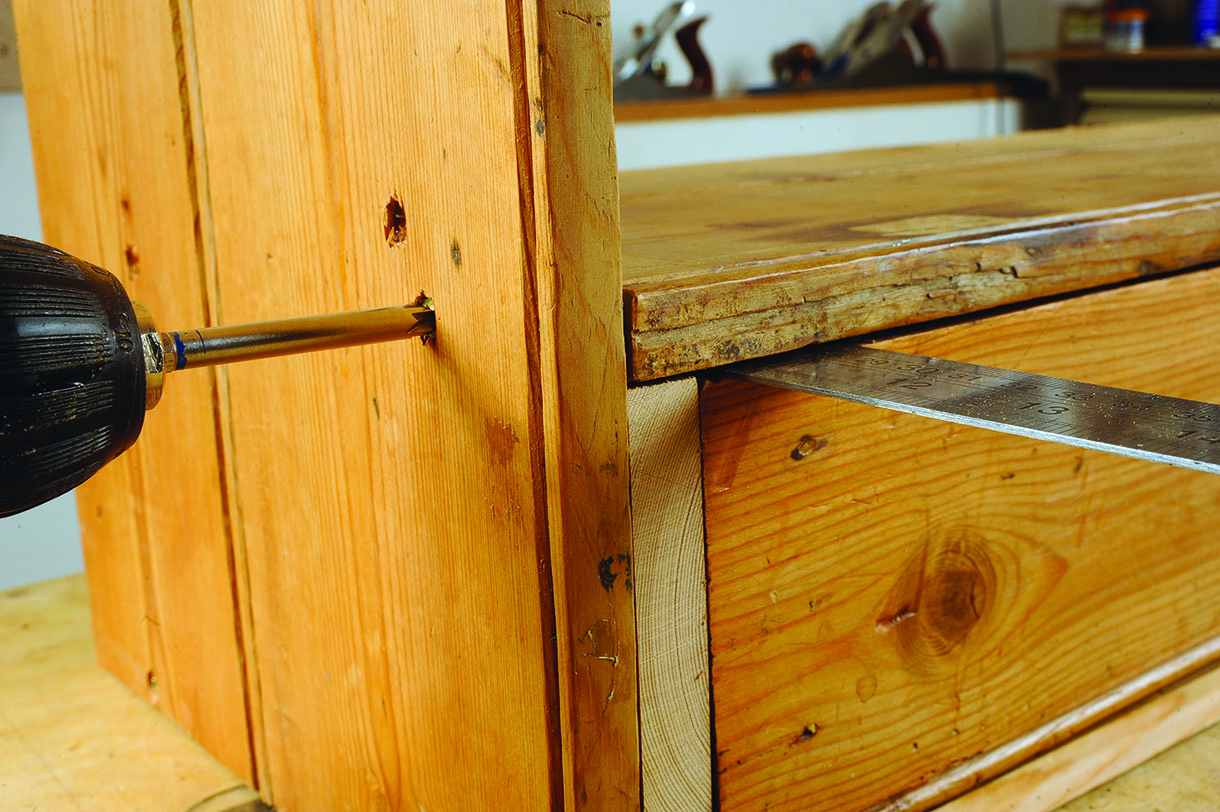 13. First the bottom board and then the centre boards were screwed through using twinfast screws. The heads wouldn’t show after filling and painting. I used a steel rule to give an adequate gap spacing so
the drawers would run easily 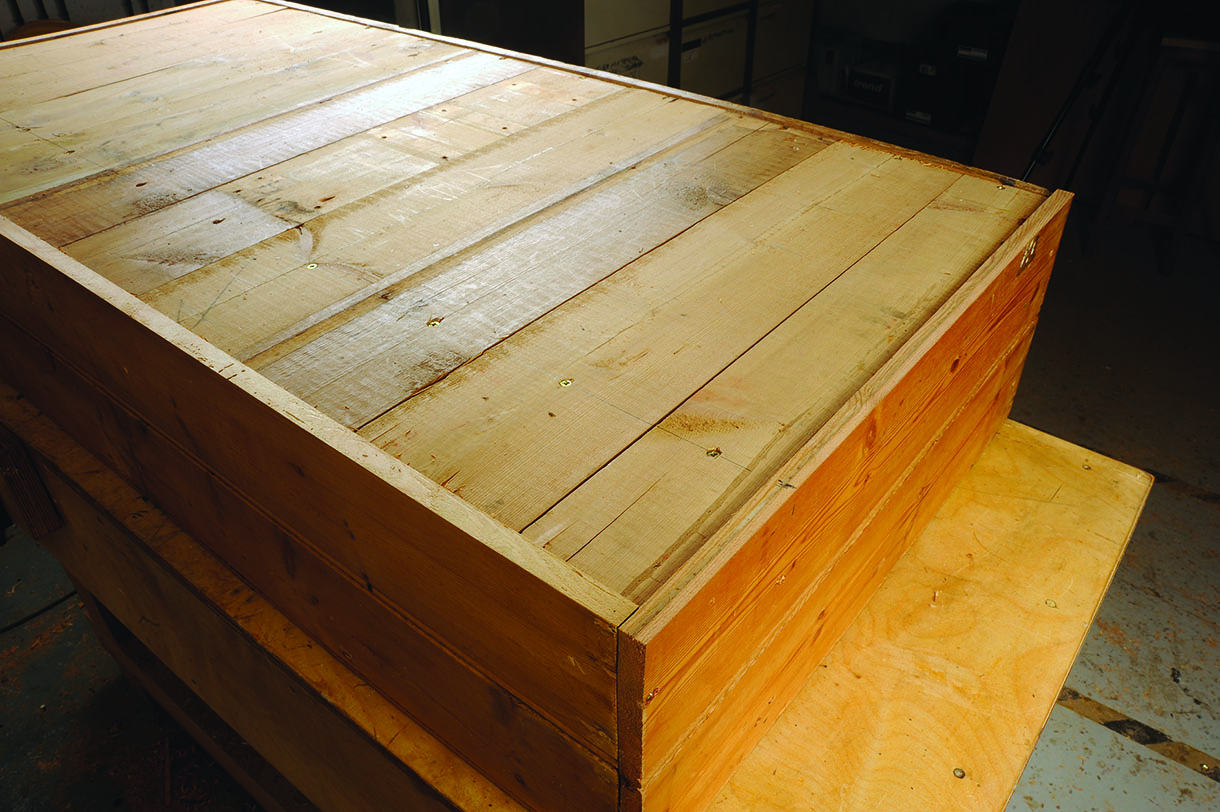 14. The back panel consisted of boards fitted together and trimmed to width and length for a tight fit. Then they were all securely screwed in place, taking care to avoid breakout where they were run into the edges of the thin pine boards 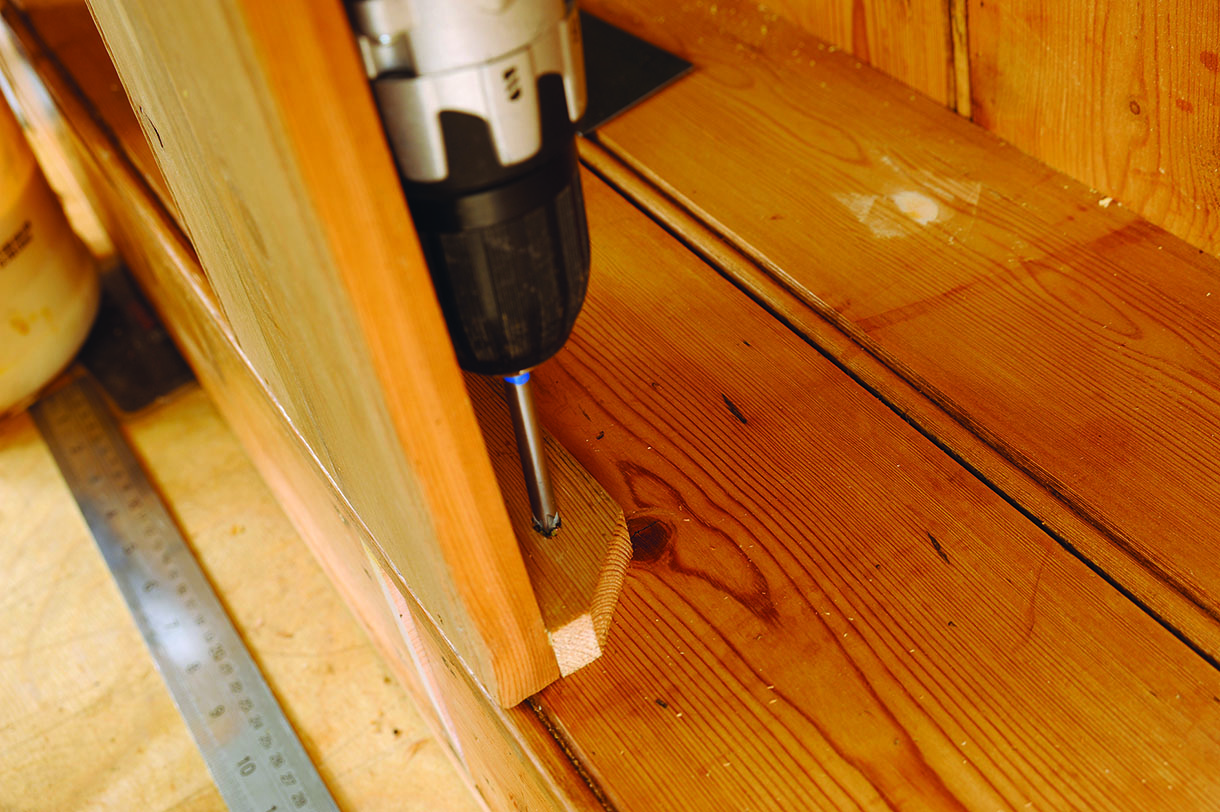 15. At the front, I needed to add a centre dividing board between the two intended doors. This was made from two narrow TGV and bead boards, glued together so the beads would meet the door edges. It was screwed in place, top and bottom, by means of short bevel-ended battens 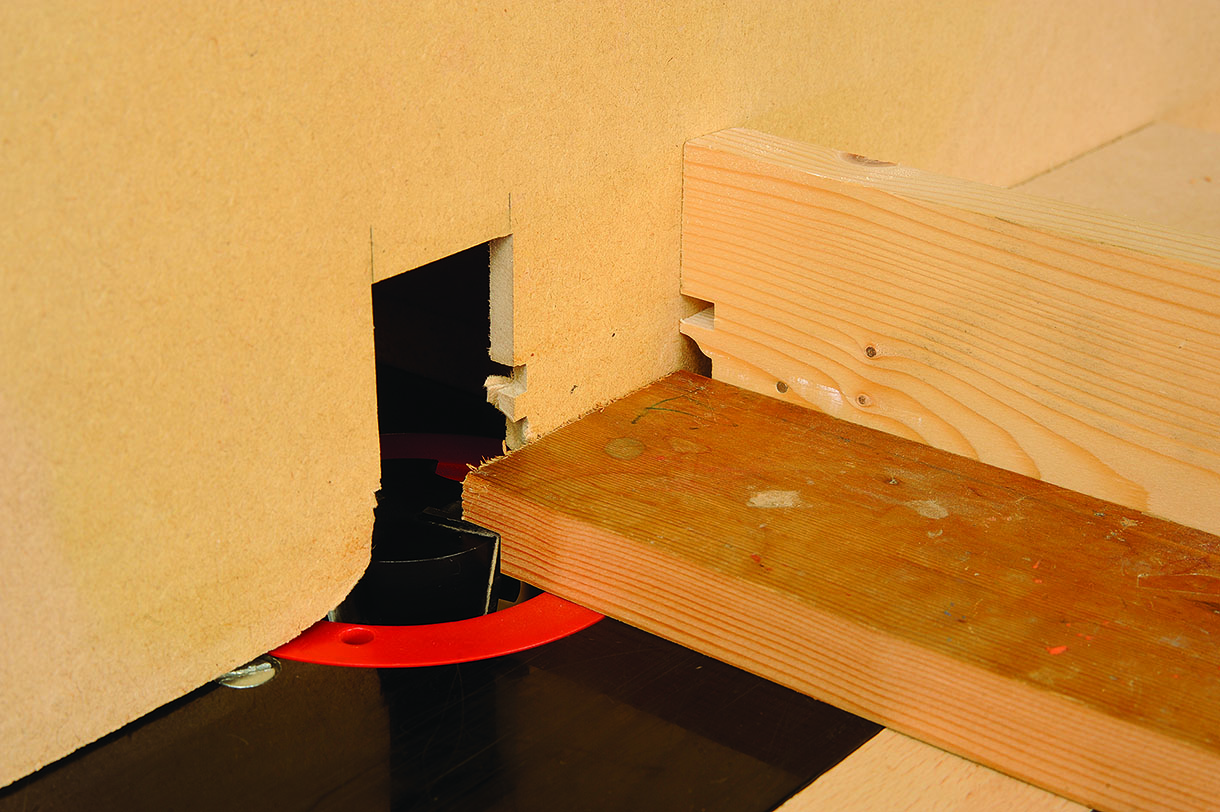 16. I wanted to be able to see the contents on display, so a simple grooved frame would suffice. I did this with a plunge-and-pull cut with the jointer again; the 4mm slot would match the thickness of standard window glass exactly. The ends needed tongues to be machined on the router table 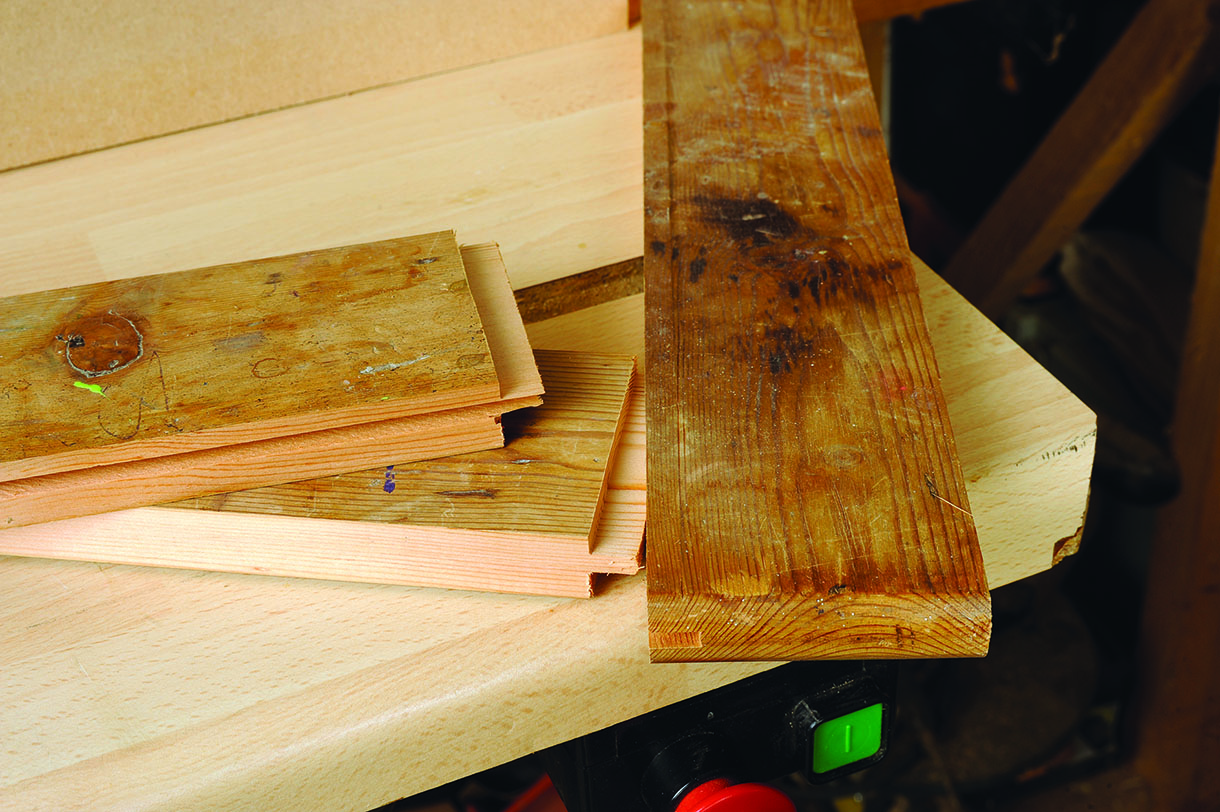 17. The difficulty was that the boards weren’t of even thickness, so some careful readjustment of the cutter height was necessary to get tight joints all round. The frames were assembled dry, ready for painting 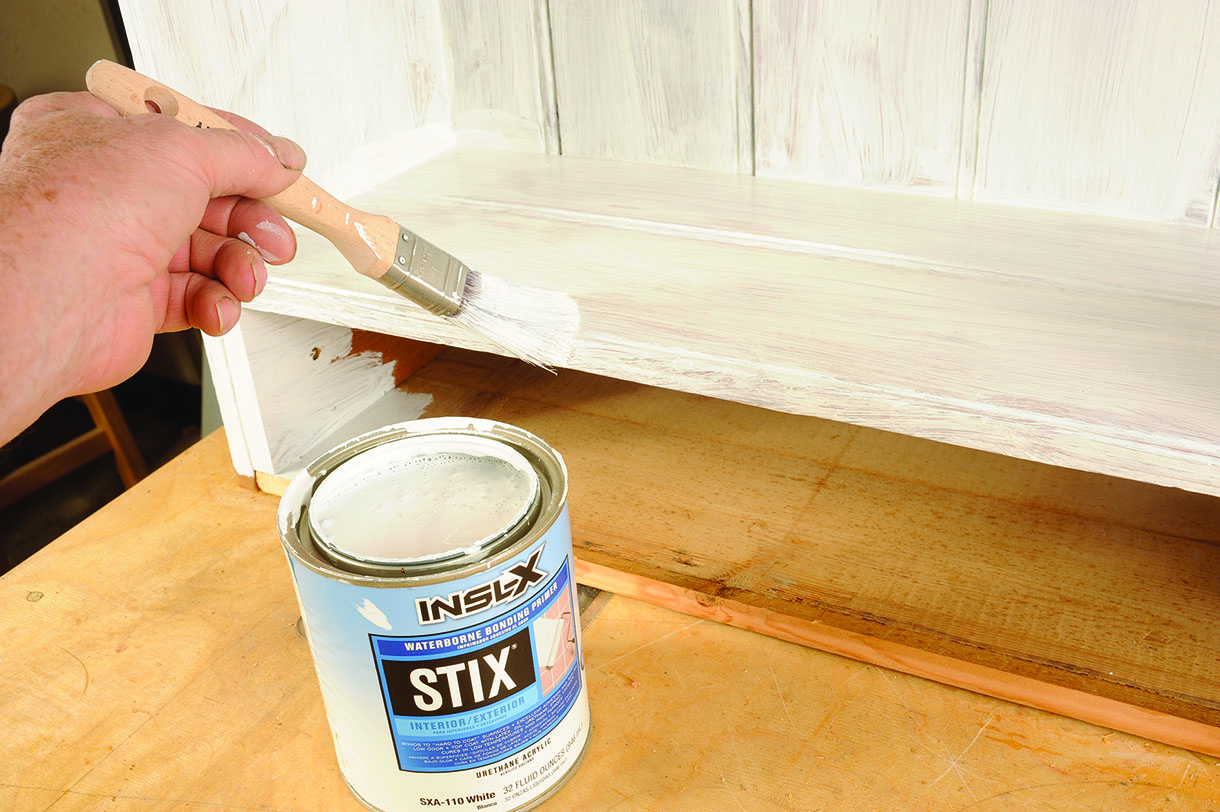 18. I wasn’t convinced all waxiness had been removed, so I used STIX primer from General Finishes. This claims to cling well to anything, so I felt it would be a good basecoat 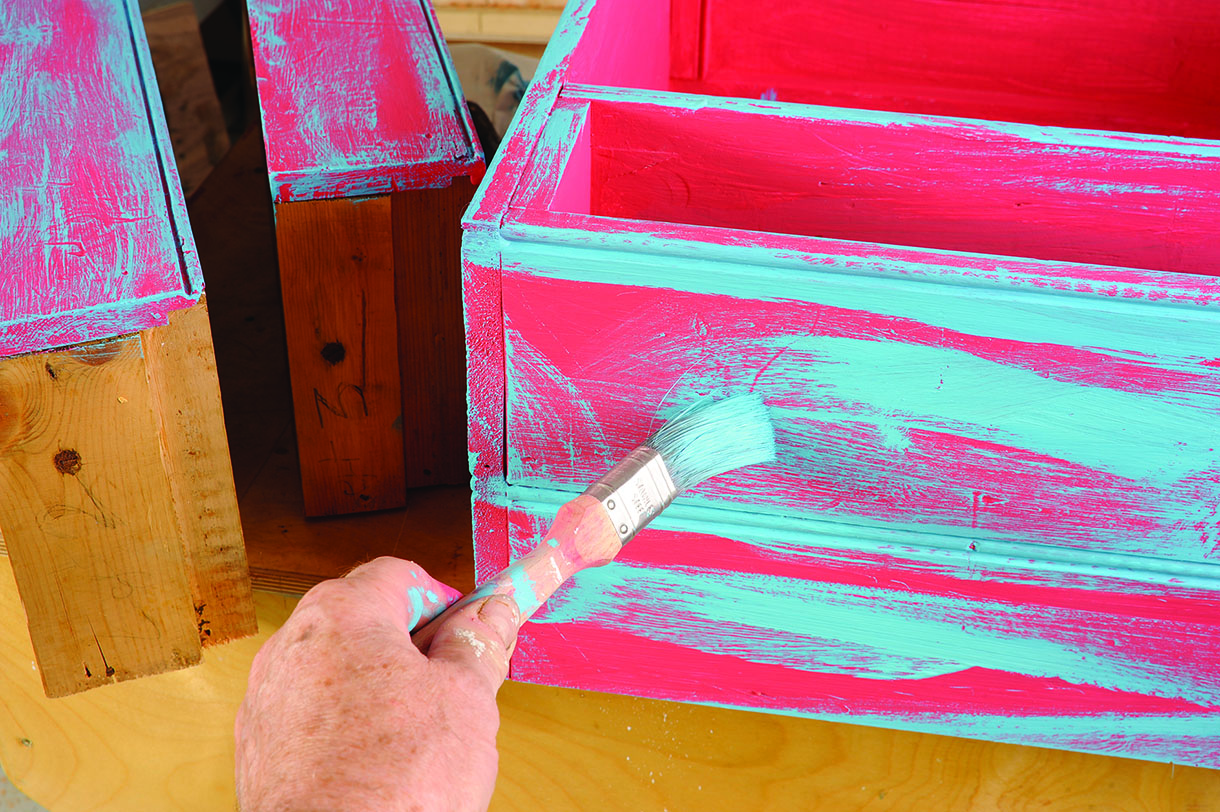 19. Next, I chose what looked like a very lurid colour combination from the ECOS environmentally friendly paint range. I added a complete coat of Magenta, then a random coat of Ocean Drive, concentrating on the beading particularly 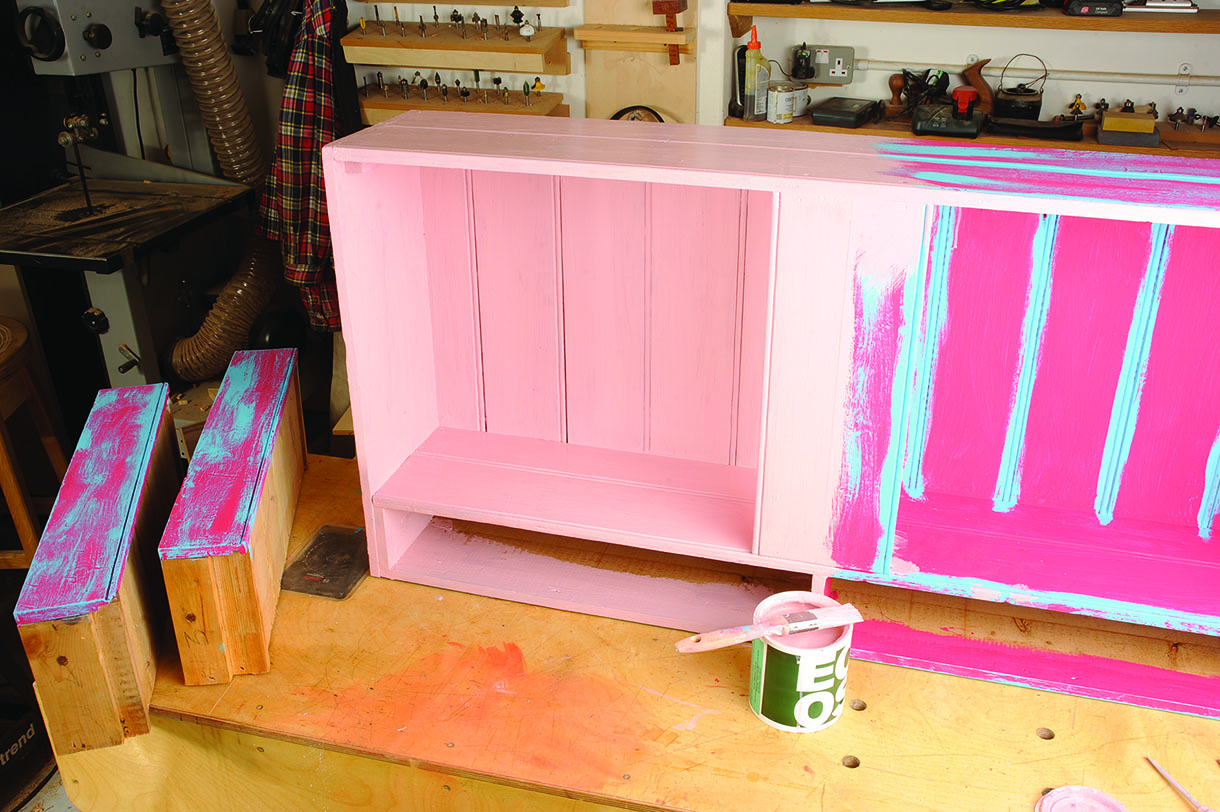 20. Once each coat had dried in turn, I then did an all over coat of Dewberry. This might all seem rather weird but it was the end result that interested me, not how I got there! 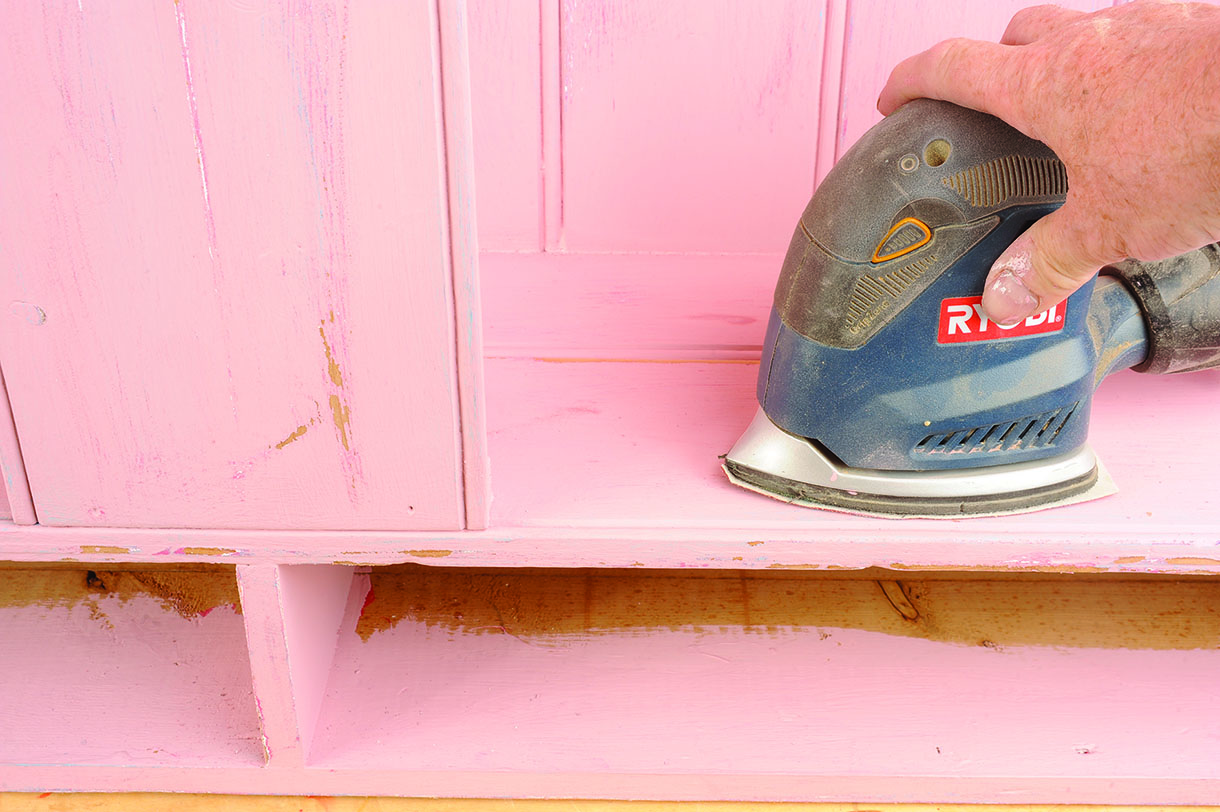 21. Now for the rough stuff – 80 grit aluminium oxide on a delta-headed sander. The idea was to break through the paint layers in a rather random fashion so the colours underneath would appear as if worn away. Even going back to the bare pine on edges wasn’t out of the question either 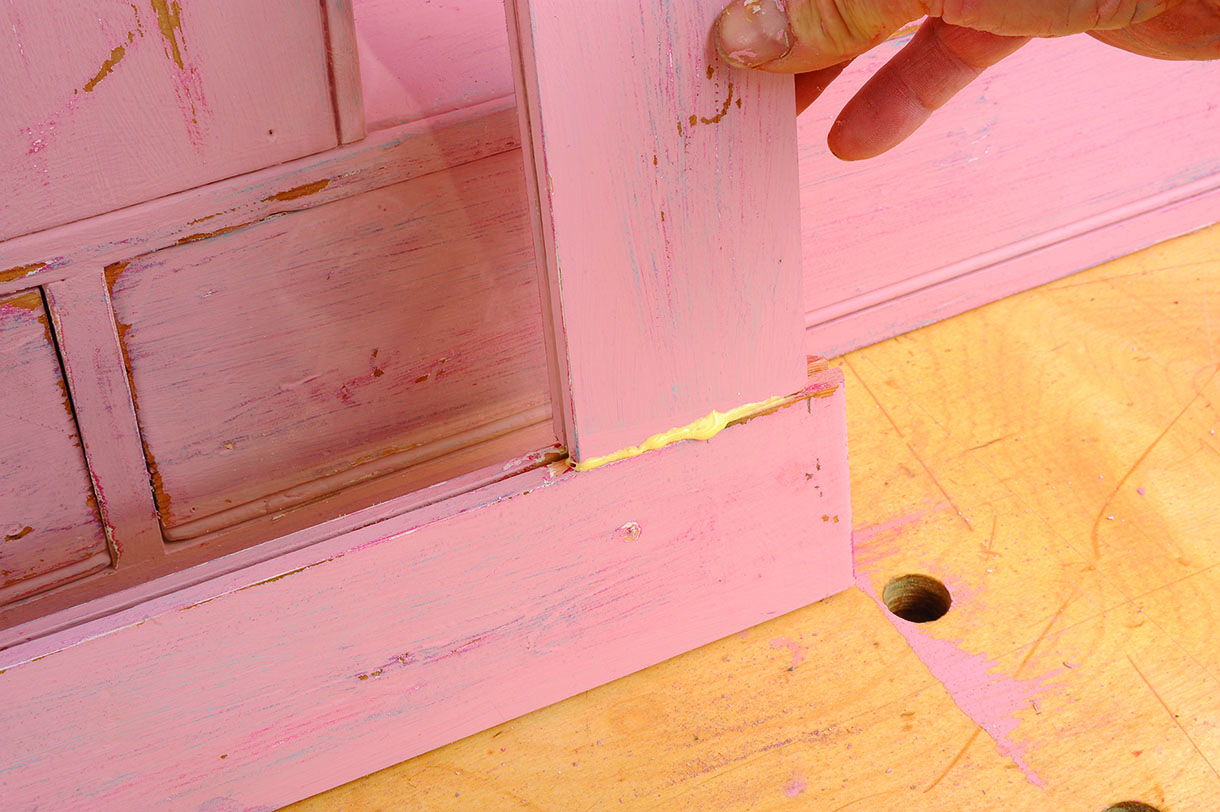 22. I measured up for the glass to fit the already dry assembled frames and got two pieces cut by a glazier. Then the frame pieces were glued and assembled around the glass and checked for overall size and squareness. Pre-painting meant the surfaces were done so no scraping of paint off glass would be needed 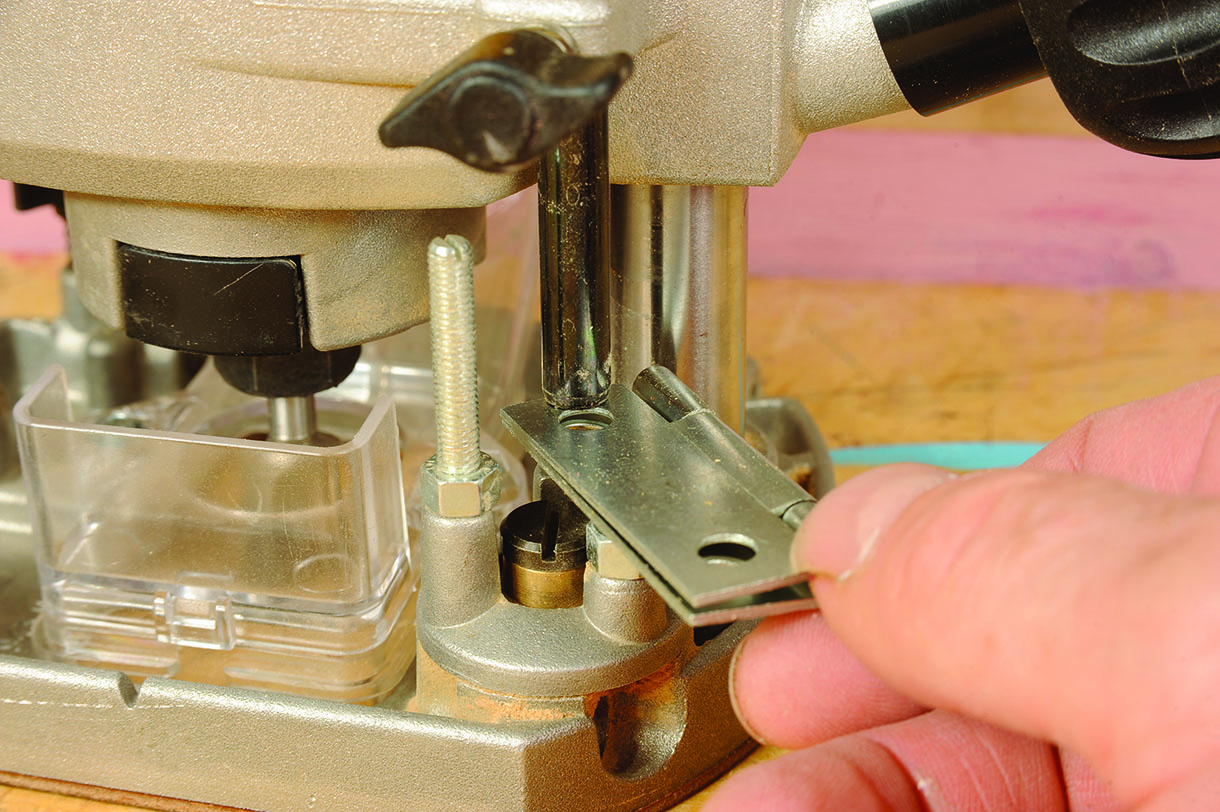 23. Once both doors were trimmed to fit their openings, the steel hinges then needed to be let into the doors only, so I placed a hinge midway across the ‘leaf’ underneath the height adjuster on my router, once the mortise cutter was resting on the door edge 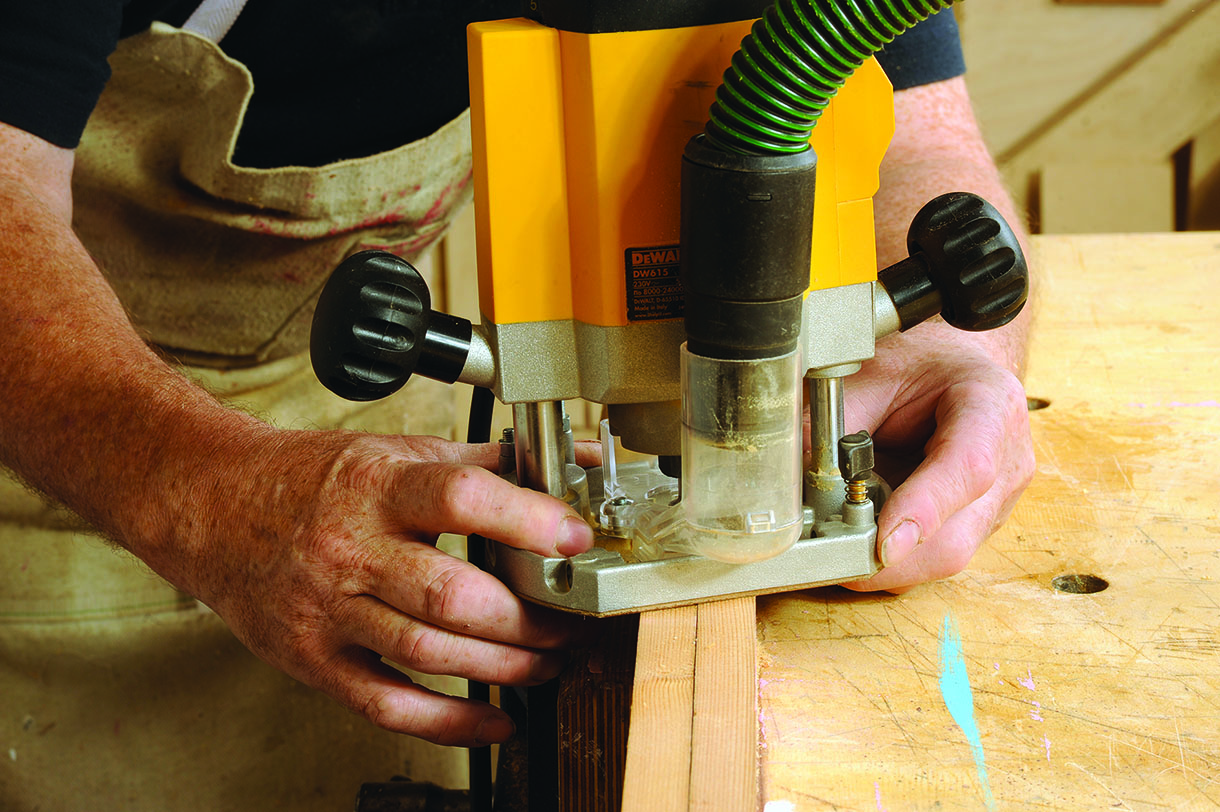 24. Both doors were clamped together in the vice so they could be done together and give a stable surface for the router to rest on. I machined up to the drawn lines and then chiselled the recesses neatly until each hinge fitted 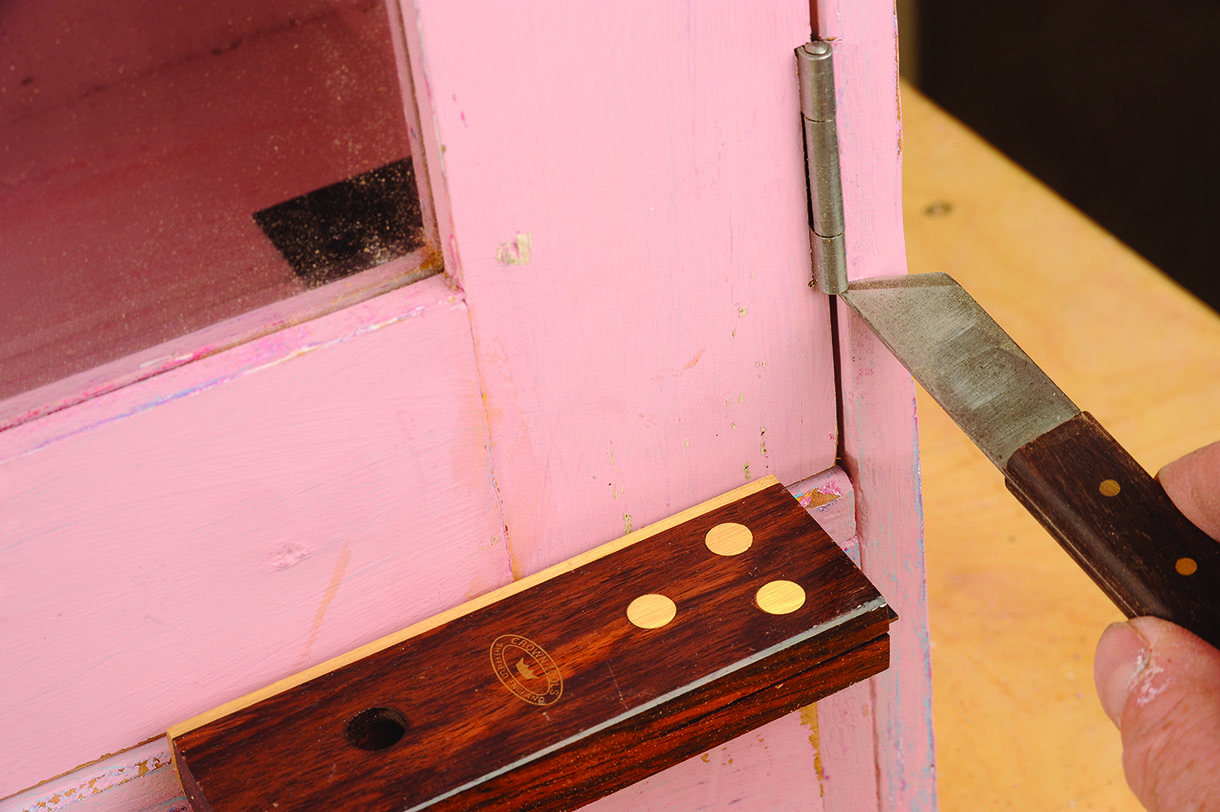 25. Each door was rested on the blade of a try square to give a gap underneath and a marking knife used to locate where to drill and screw each hinge in the carcass 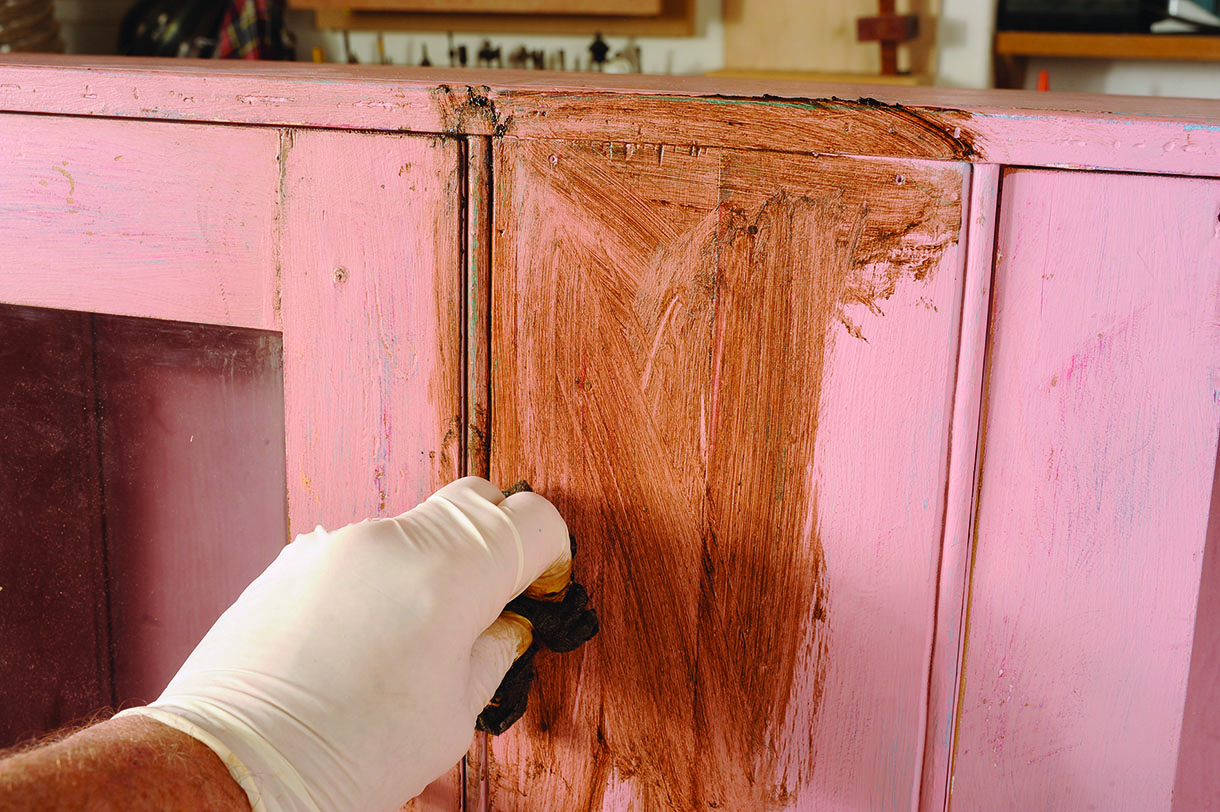 26. The carcass still looked very pink, which wasn’t what I was after, so I daubed dark oak hardening wax on in sections at a time and immediately wiped off evenly 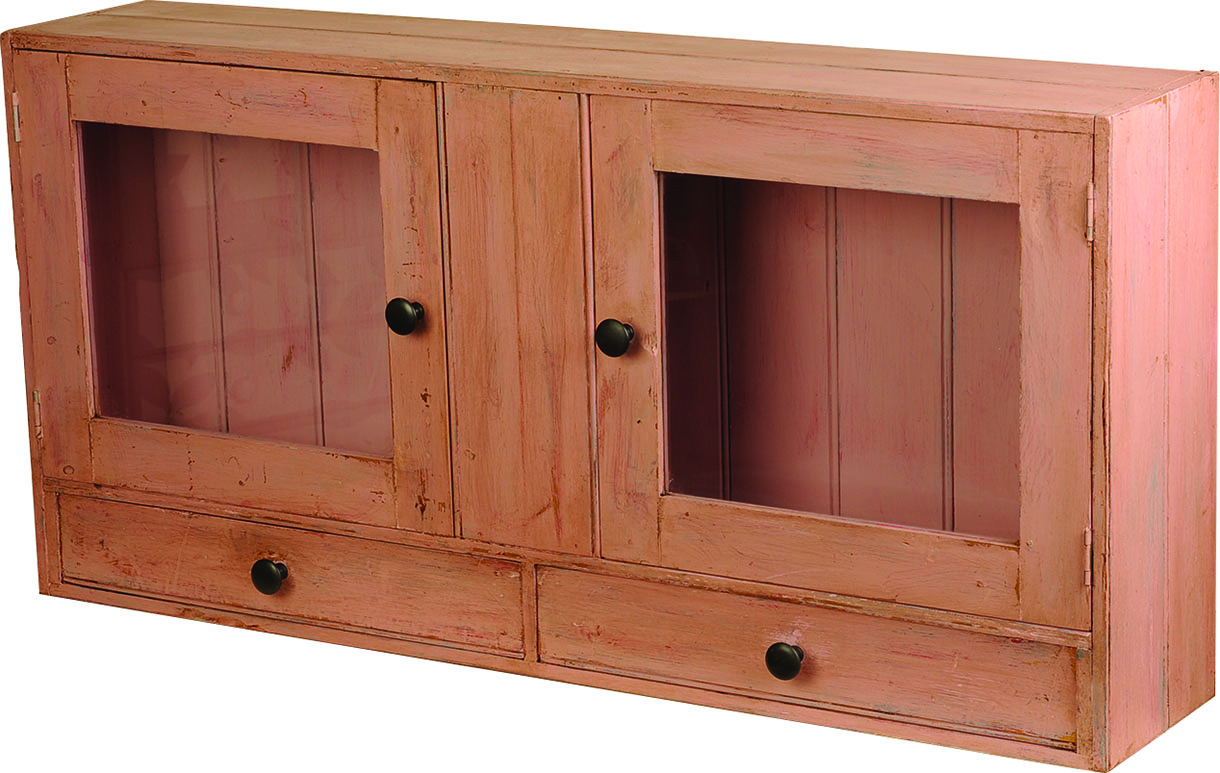 27. The result is quite a complex surface effect, looking like an old, distressed finish, which was what I was after. Now it just needs to be put to good use and shown off!