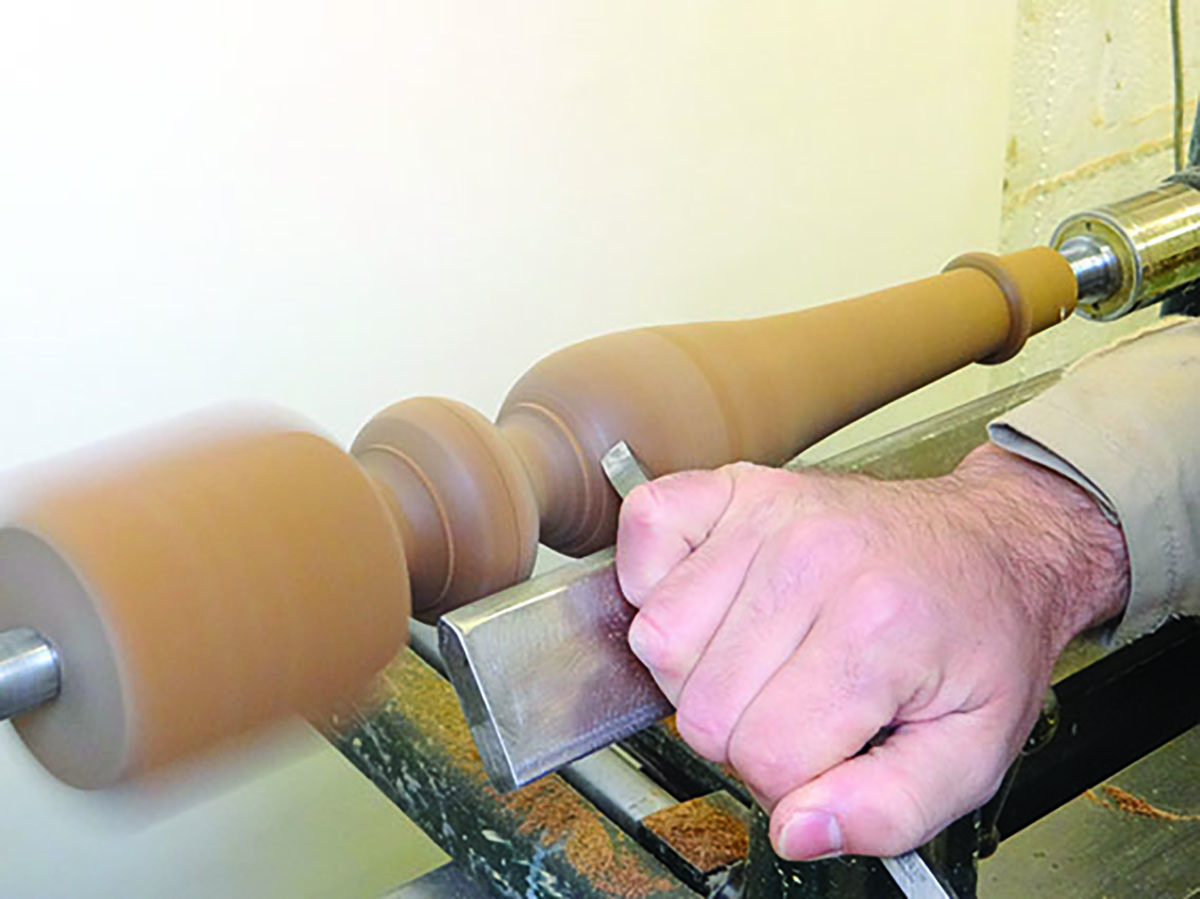 I have looked at the techniques of turning various different shapes into timber, whether that be spindle work or faceplate turning. I thought it might be interesting and useful to look at how to identify some of these shapes by name. It is commonly quoted that there are only three shapes in turning:
• Beads: or positive curved shapes
• Coves: or negative curved shapes
• Straight lines: positioned at any angle
This is correct, however these shapes can be stretched, squashed and combined to make new shapes. They are still based on the basic bead and cove, but have different names that help to distinguish them from each other. Here, I will try to show each of these shapes with their names and explain where they can be commonly found and used. Many of the shapes are closely related to the traditional mouldings that can be seen in most houses in one form or another, whether on the skirting boards, dado rails, picture rails or simply decorating the edge of a shelf. They will vary in complexity from a simple bevelled edge, bullnose or round over, to ovolo or ogee mouldings. A look at a router cutter catalogue will show you cutters that will produce most of these shapes on the edges of timber. The shapes used in faceplate work are directly linked to these mouldings, the forms used in faceplate work are also used in spindle turning, although they are slightly manipulated to make them work in this way. 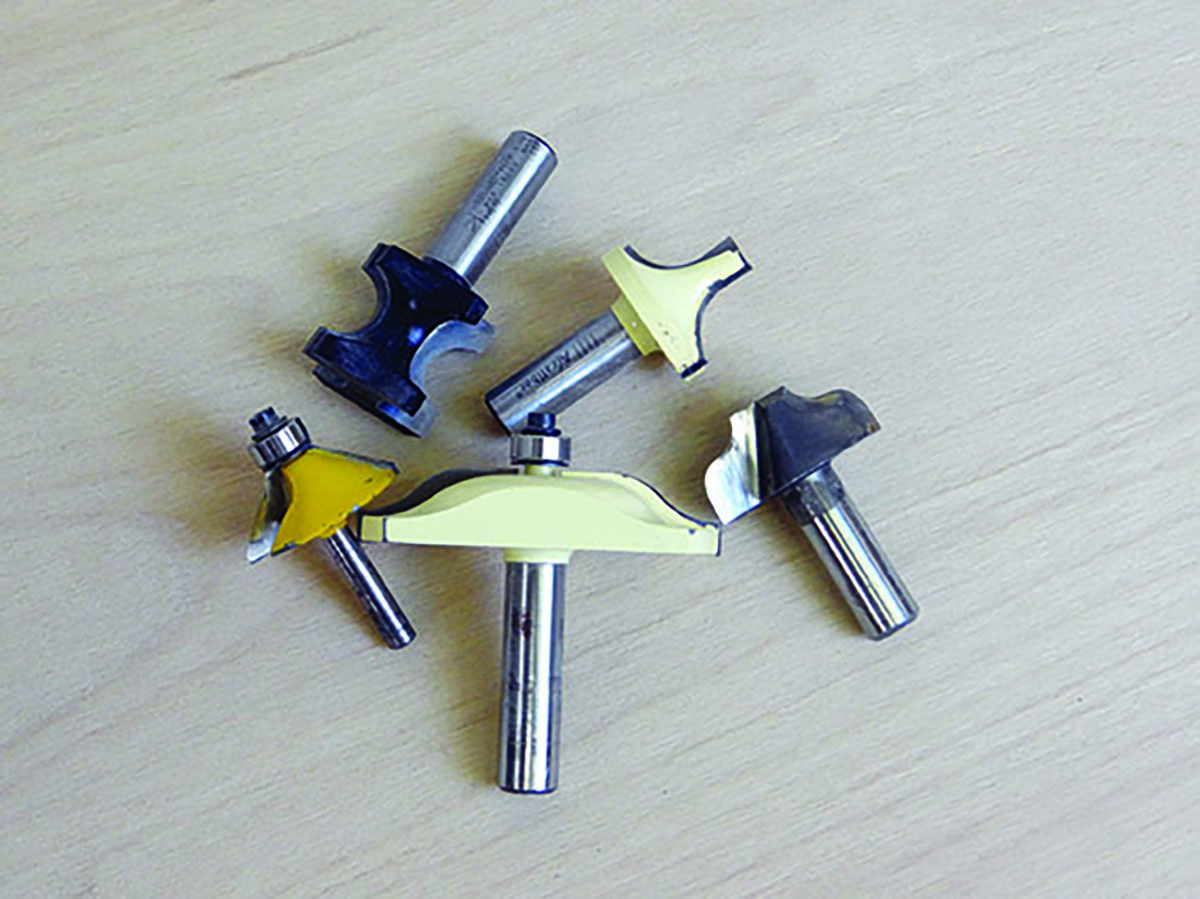 Assorted router cutters to produce edge moulds. These shapes are closely related to many of the shapes used in turning

Why do I need to Know This?
In short, I suppose you don’t. That said, it is always good to expand your knowledge and a deeper understanding of a subject can only be a positive thing. It can also be useful to know the names of these shapes when designing your turnings or when watching a demonstrator, so if he describes what he’s doing and throws in a technical name of a shape, you will know what he’s talking about!
Positive shapes
So a bead is a bead, right? Well not quite, because if it’s a narrow bead it is known as a ring, and if it’s stretched out it can become a bobbin or a sausage. This is illustrated in the pictures here. A bead will tend to be slightly narrower than it is tall. When a bead becomes very small and narrow it becomes known as a ring. This is not to be confused with a captive ring, which is parted from the main section of timber, and is free to rattle and move around. As a bead gets wider it will reach a point where it clearly becomes a ball, and everyone knows what a ball looks like! Once it is stretched further still it becomes known as a bobbin. Continuing to stretch it to the point where it has a straight face with rounded ends, it becomes a sausage. 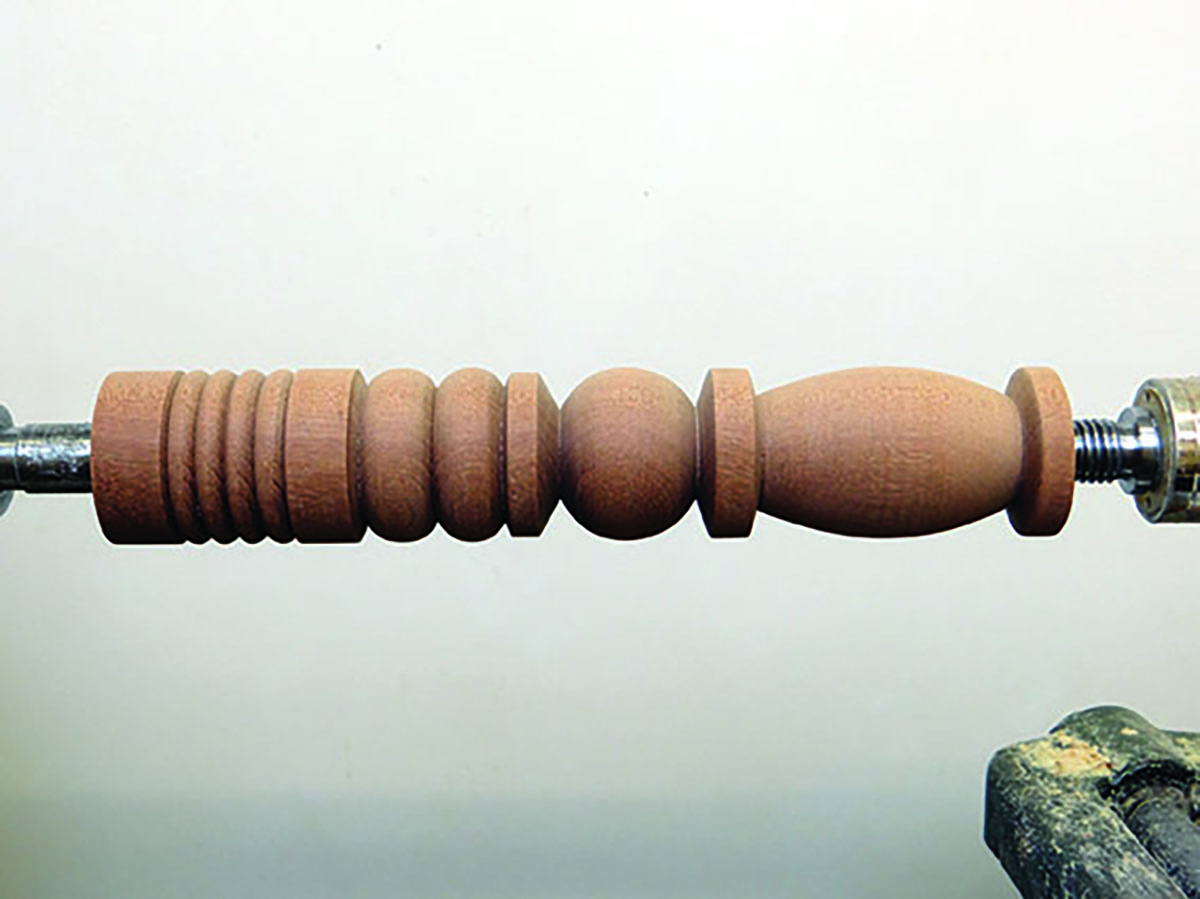 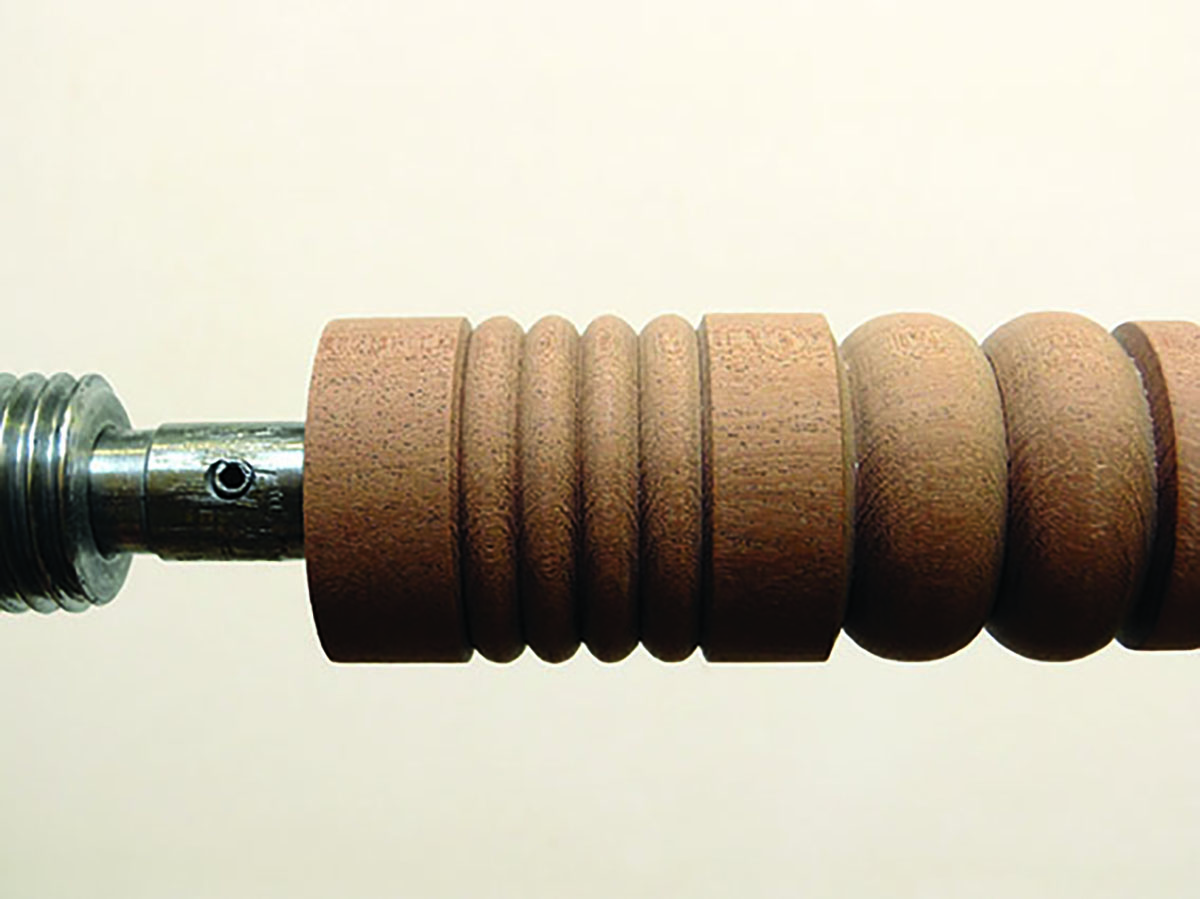 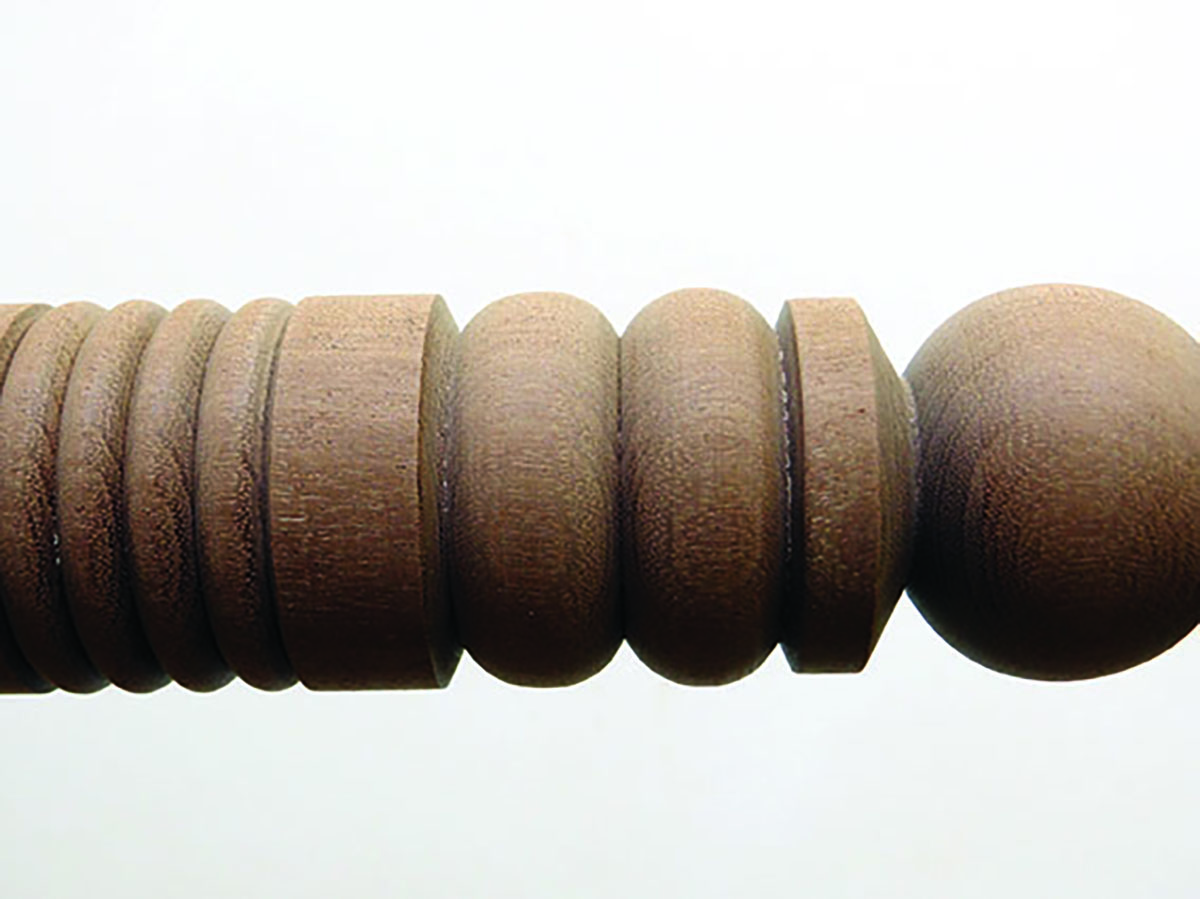 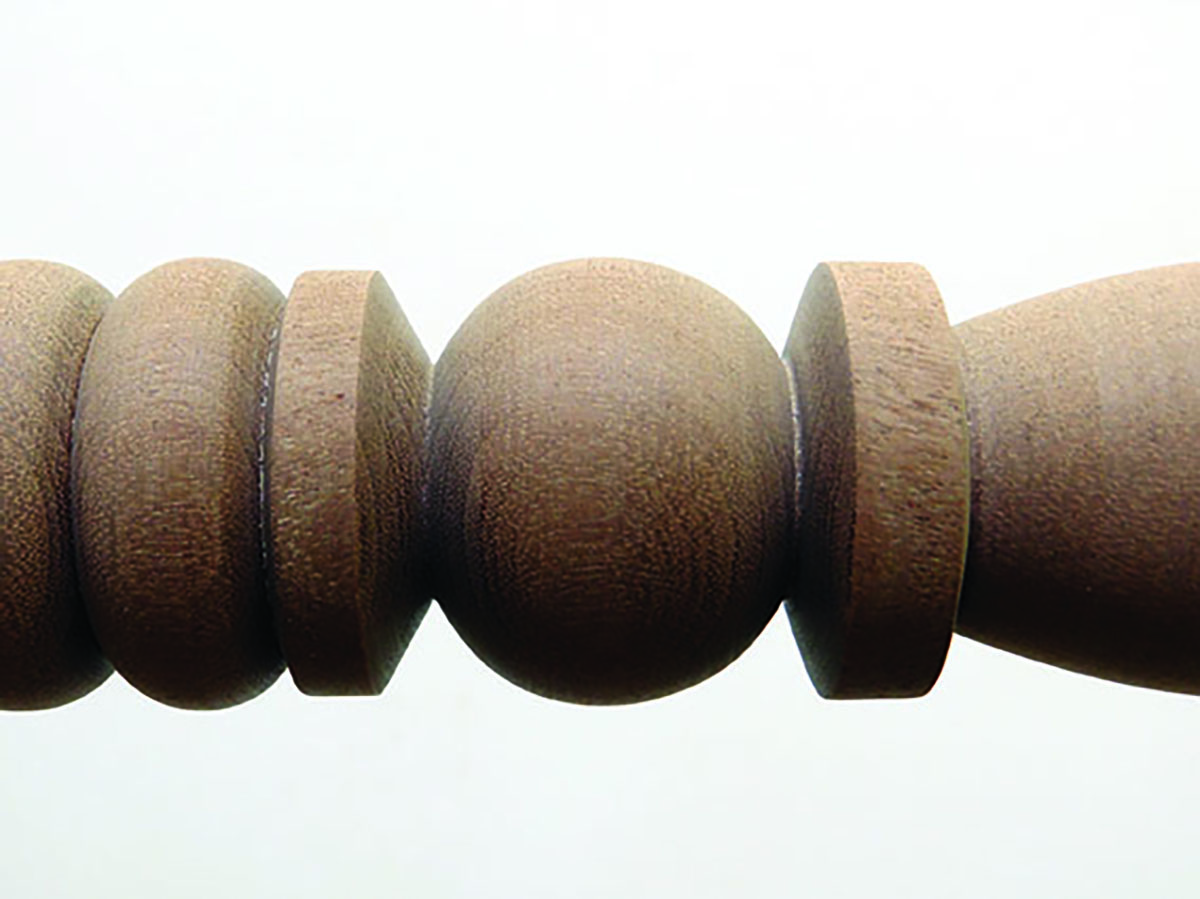 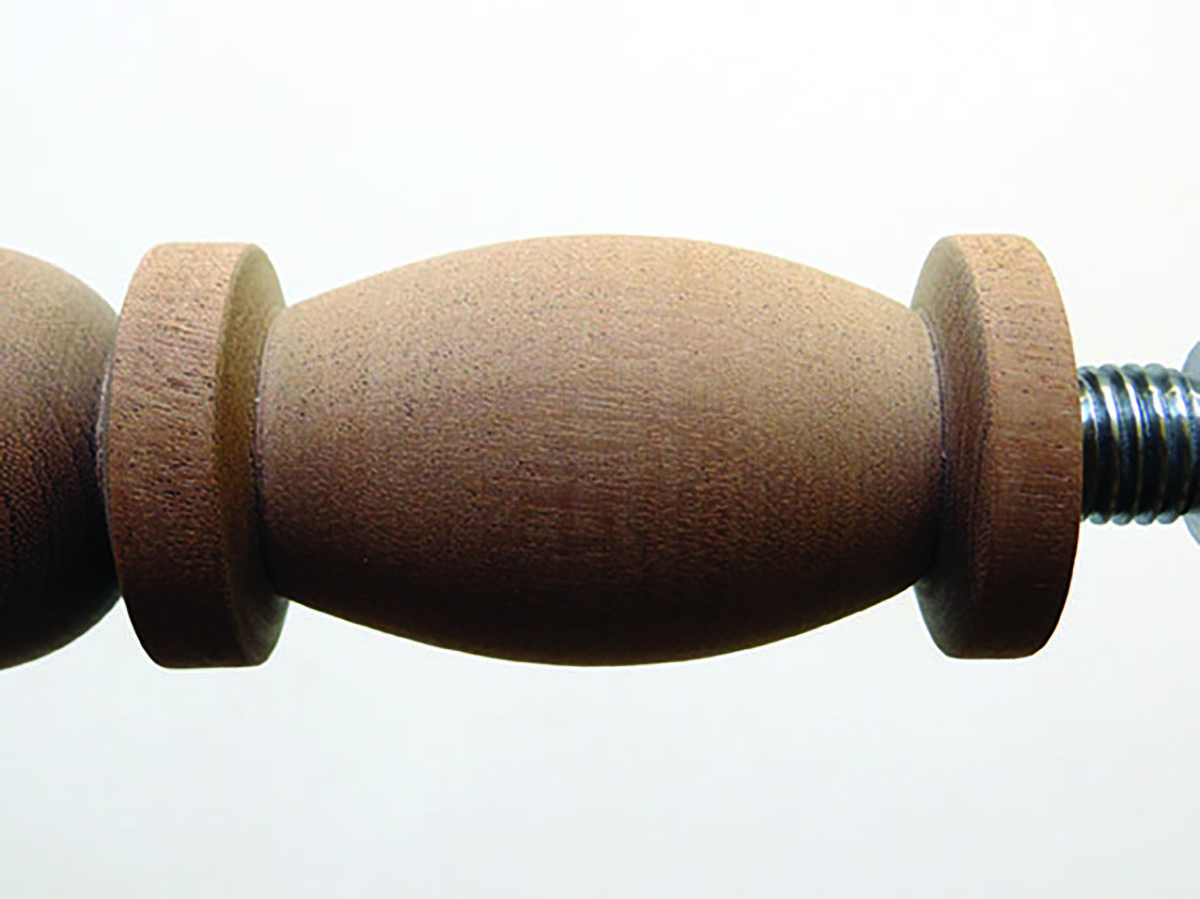 Negative shapes
You will be seeing by now that by altering a shape, it often gets a new name or description and while there are fewer variations for hollow shapes, there are still distinct differences. ‘Cove’ is the most common phrase used for these hollow shapes, much like ‘bead’ is the common name for rounded shapes. Coves can be almost any size and are called coves until they are stretched out to form a long hollow, which is known as a reel. In the image you will see two reels separated by a quirk, which I will come to later. A scotia is best described as a lopsided cove. A cavetto is a half cove, often seen with a small fillet either side of it, where a central bead has a fillet each side, followed by a cavetto and another fillet, before continuing along the spindle. 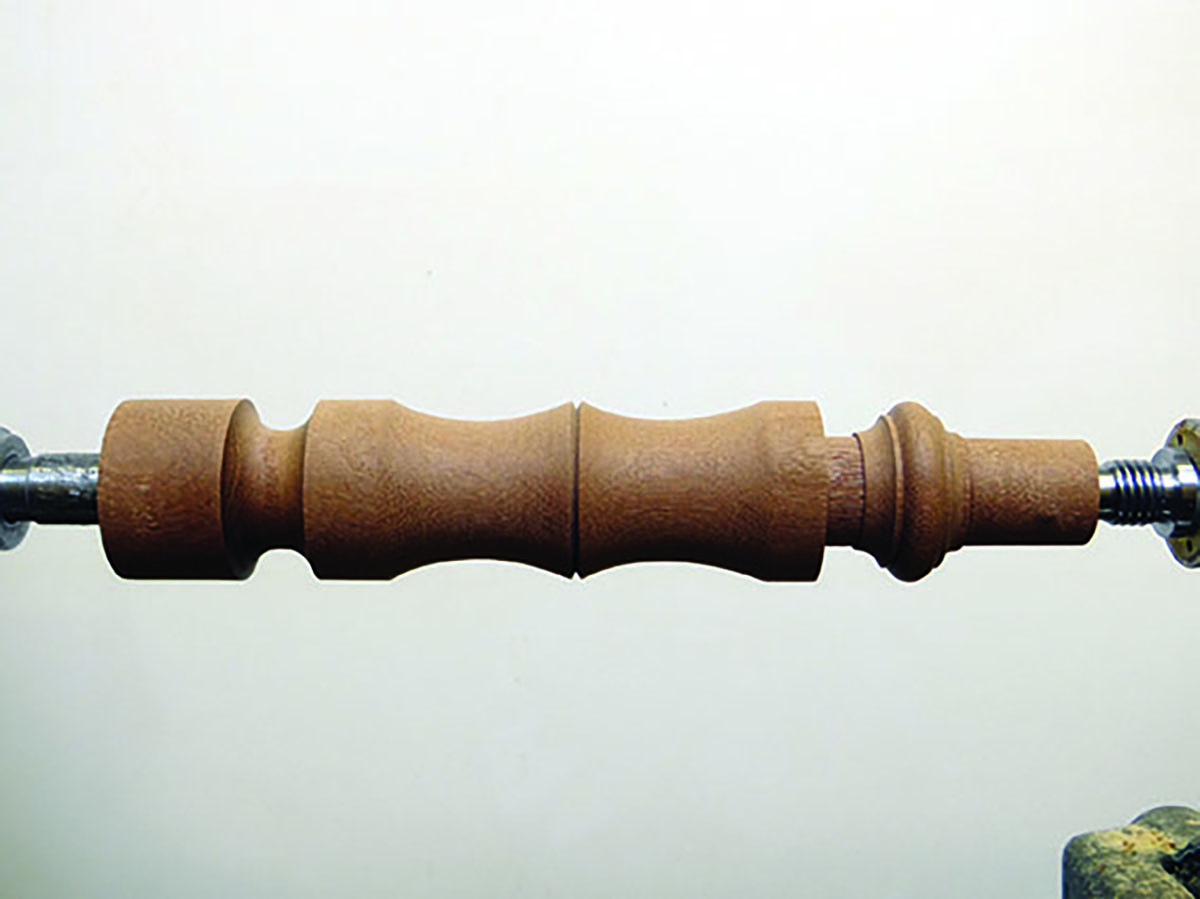 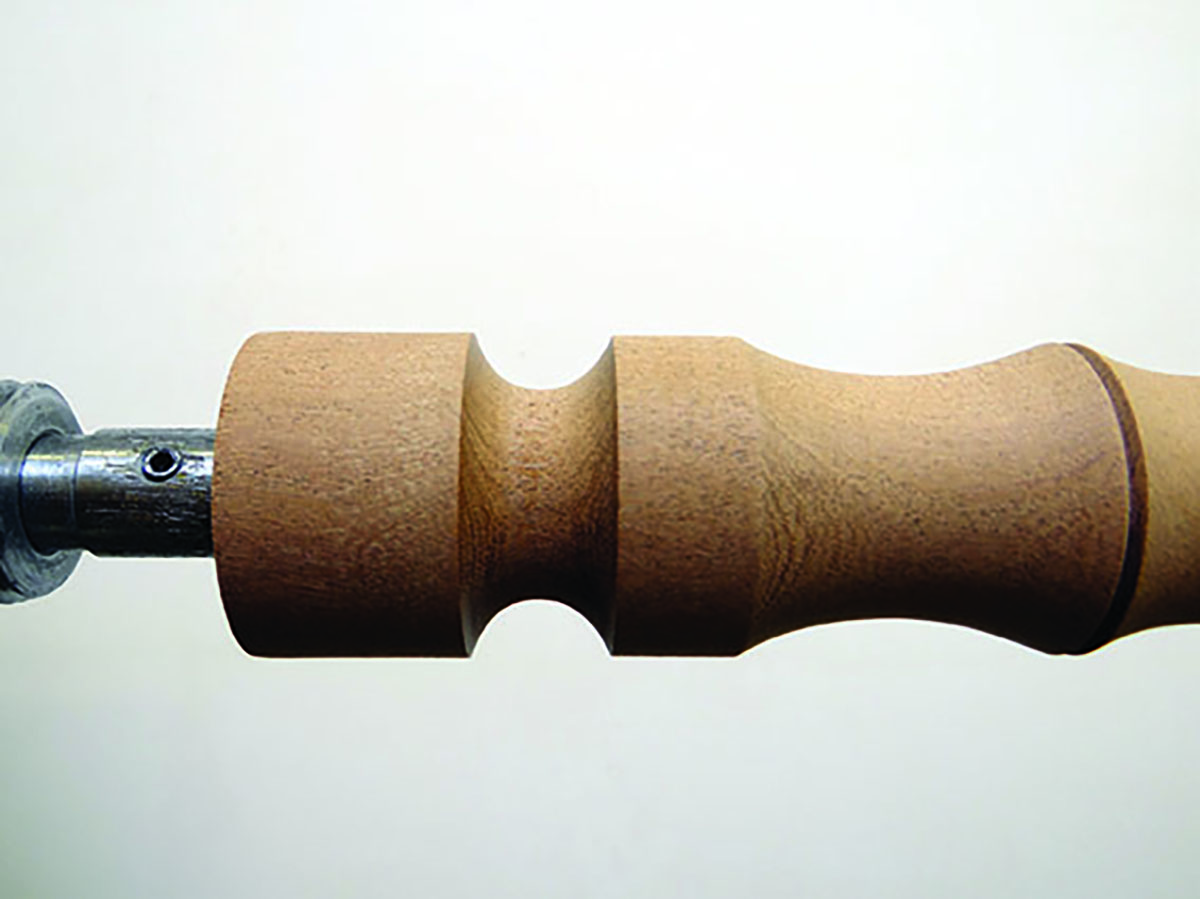 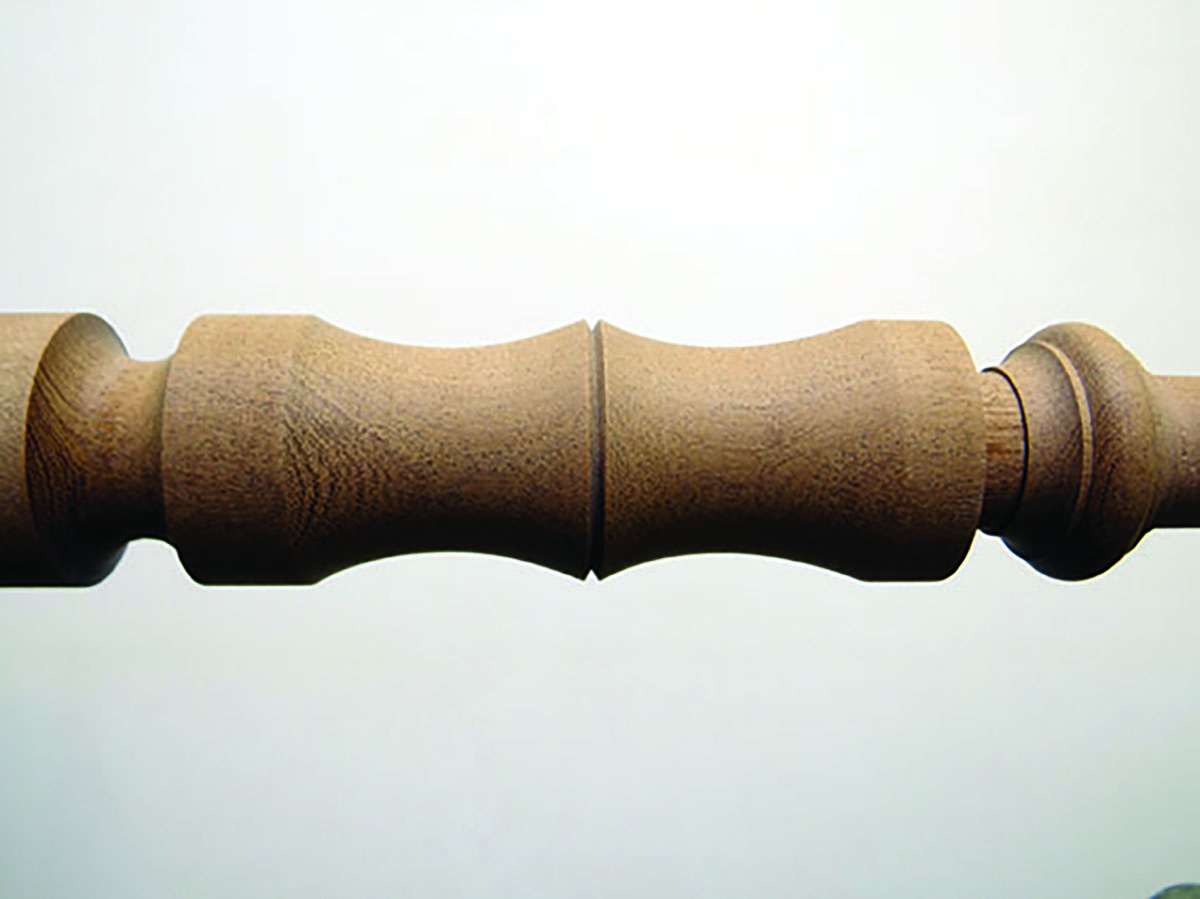 Reels – separated by a quirk 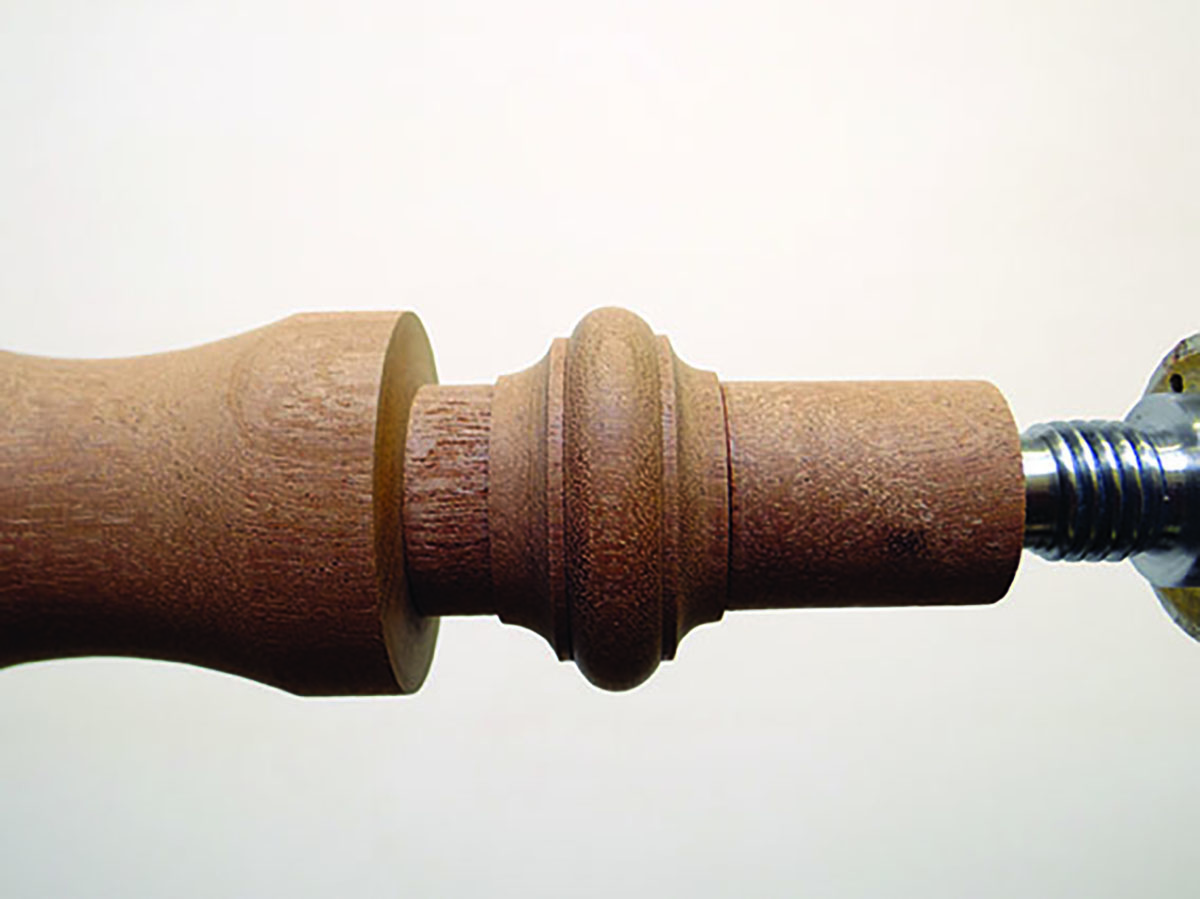 Cavettos, each side of a bead, using fillets to break up and define the details 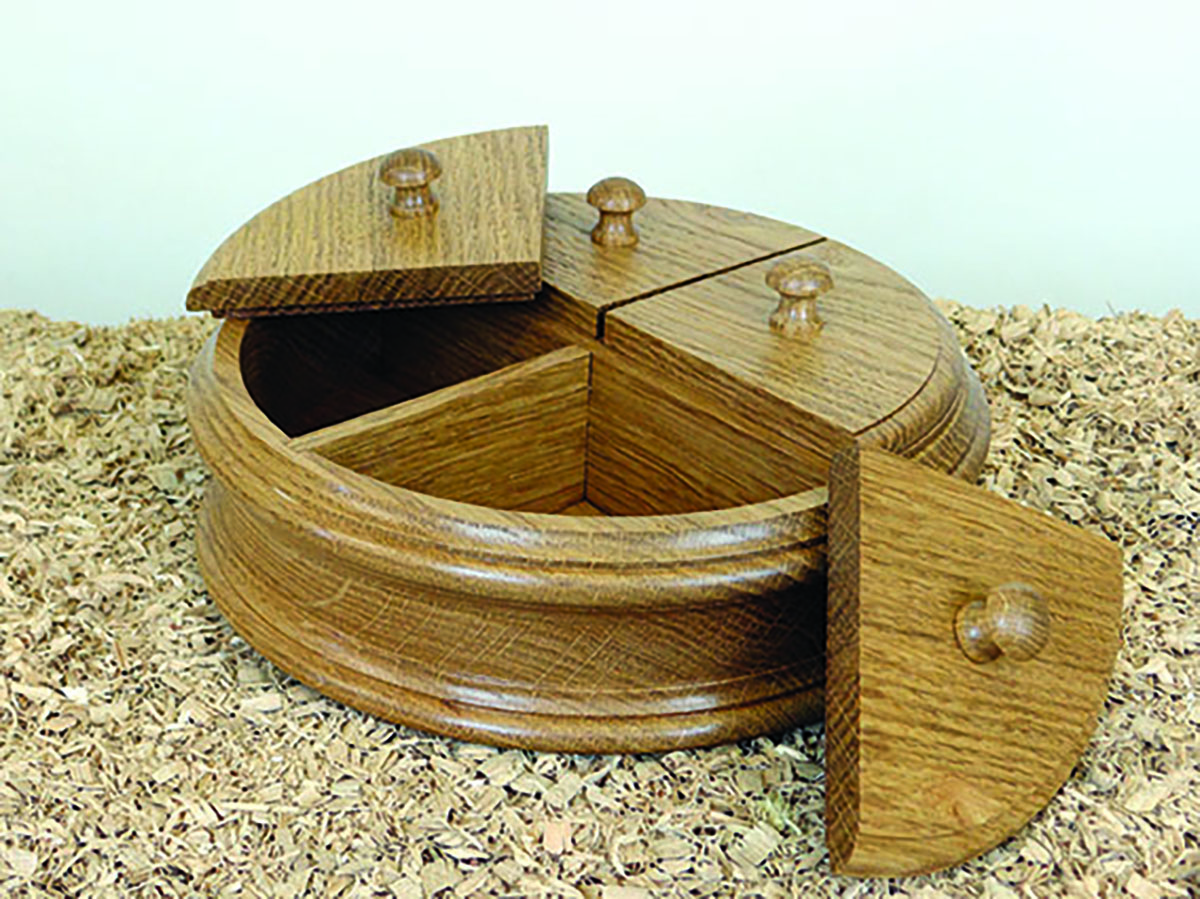 Straight lines
Straight lines are usually used to break up and define other, more bold details, especially in the case of fillets. Without fillets, beads and coves will flow into each other in a very wishy washy sort of way. The definition that this tiny detail brings is surprising, but important to traditionally turned designs. Collars are wider straight sections that appear usually at the top of a turning and are often used on mass-produced turnings to put working room between a square pommel and the first turned detail on stair spindles and furniture legs. Hand turners don’t need this detail as a sharp skew will cut details very close together, but a copy lathe will not be able to produce this level of detail with the large scraping cutters that are used. V-cuts are quite self explanatory, used on things like meat tenderisers and foot massagers to create crisp V-shaped details. When a small V-cut is used to separate or define another detail, such as between the reels or as on the legs of my oak (Quercus robur) stool, this is known as a quirk. 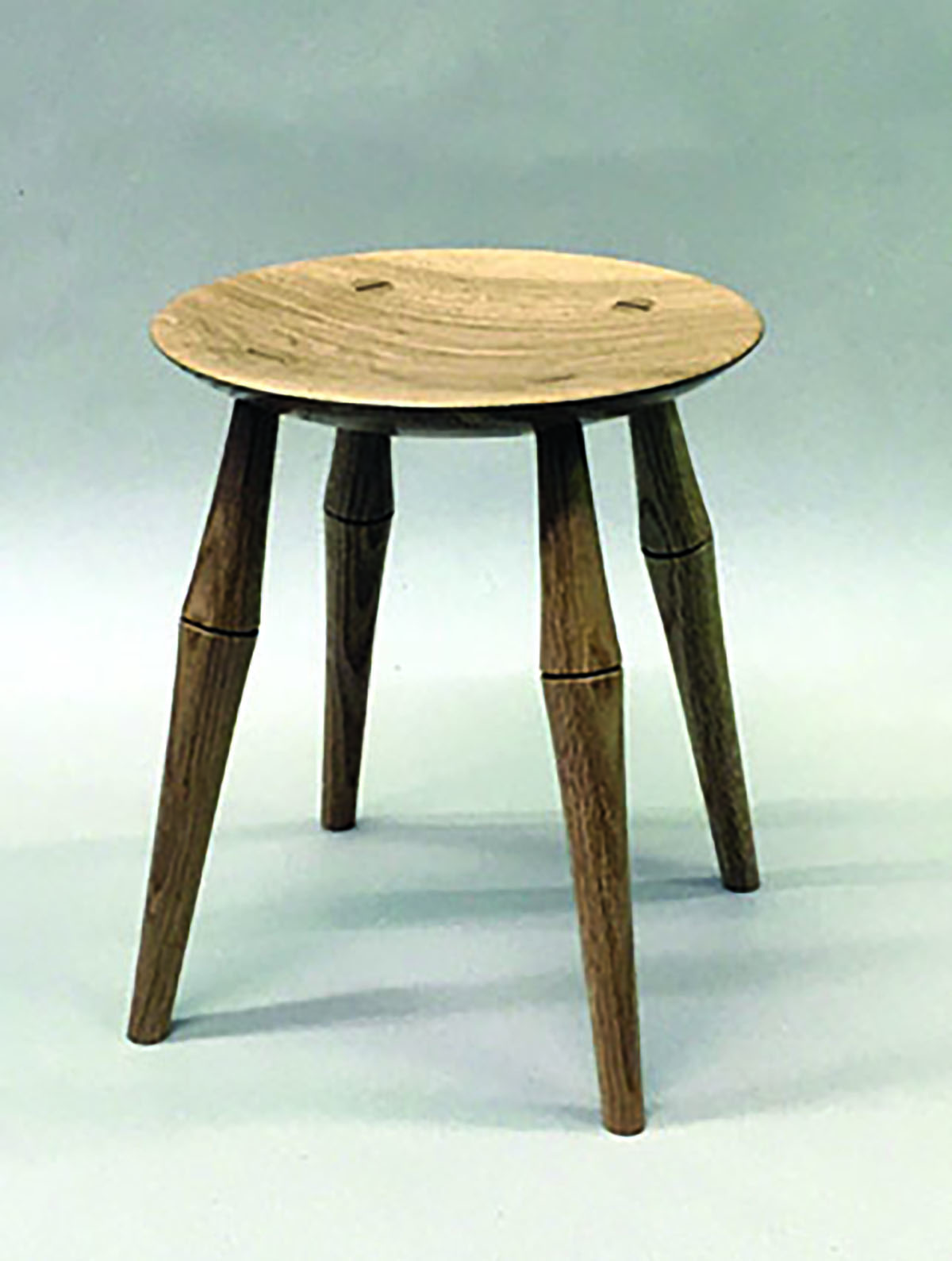 The legs of my oak stool feature a small V-cut to highlight the shape of the legs, known as a quirk

Top Tip: Good use of a fillet
Sometimes you will notice a fillet is slightly tipped back towards a neighbouring bead. This is sometimes quite subtle and at other times very obvious, and is because fillets look best when they are set at less than 90º to the detail next to them. If a bead finishes at an angle to its base, to maintain an angle less than 90º and make it look its best, the fillet will traditionally be cut at an angle. 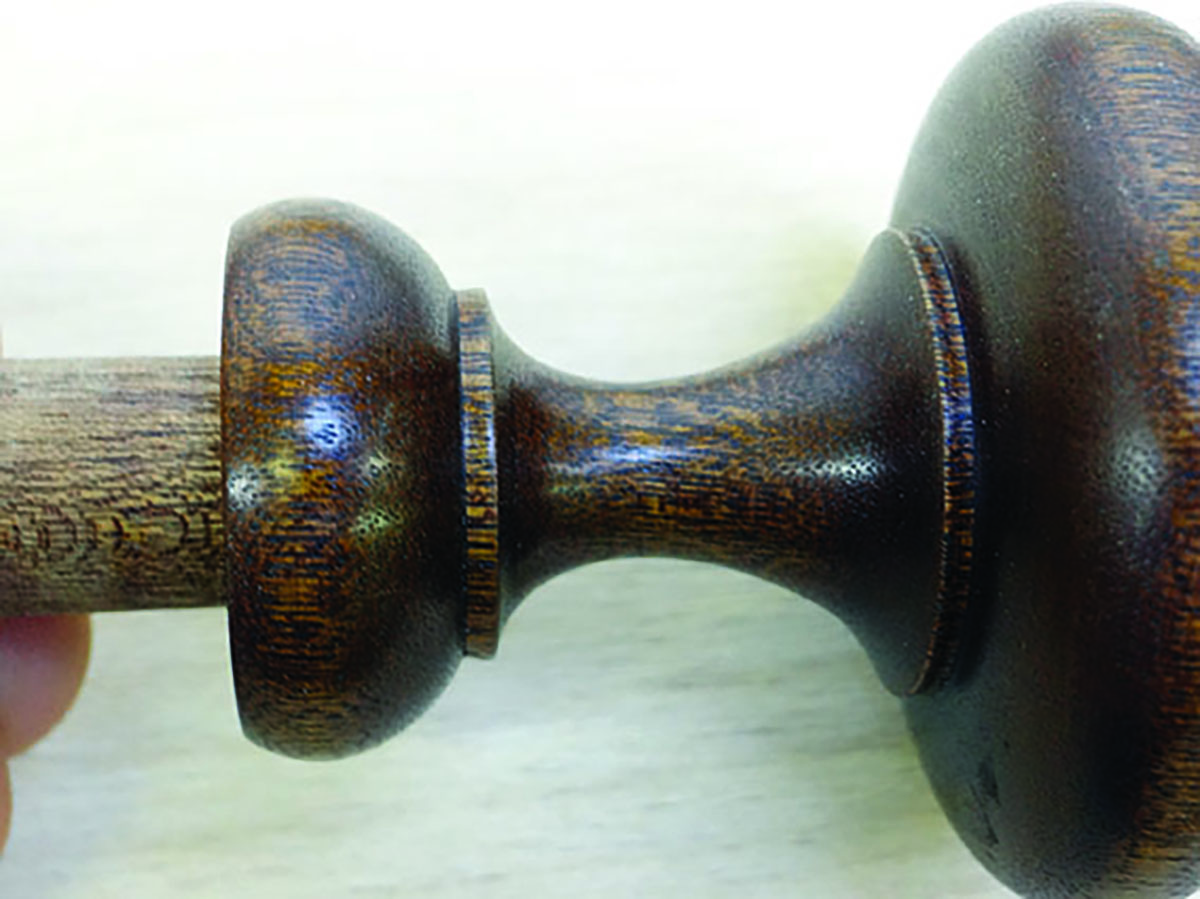 The angled fillet is often subtle but incredibly effective

Combinations
What do you get when you cross a bead with a cove…? Although it sounds like the beginning of a poor joke, this combination is how more advanced shapes are created. An ogee, for example, is a hollow shape that flows into a rounded shape to form a flowing S-shaped curve. Done well, an ogee is a beautifully graceful shape that is incredibly versatile which can be found in both spindle and faceplate work, being able to be stretched out wide for the underside of a platter, or stretched up tall for a deep bowl or vase form – as seen in the work of the late Bert Marsh who was known for his beautiful ogee forms. Getting technical, an ogee comes in two forms which are recognised by their Latin names of cyma recta and cyma reversa. Cyma is the overall ogee or S shape, the recta and reversa refer to the balance of the shape. The recta has the hollow or concave portion at the top of the shape, whereas the cyma reversa has the rounded, or convex portion at the top of the shape. A combination commonly found in many spindle turnings is a tulip shape, which is once again a combination of a rounded and a hollow shape, and shown as the top section on the oak lamp in the picture. 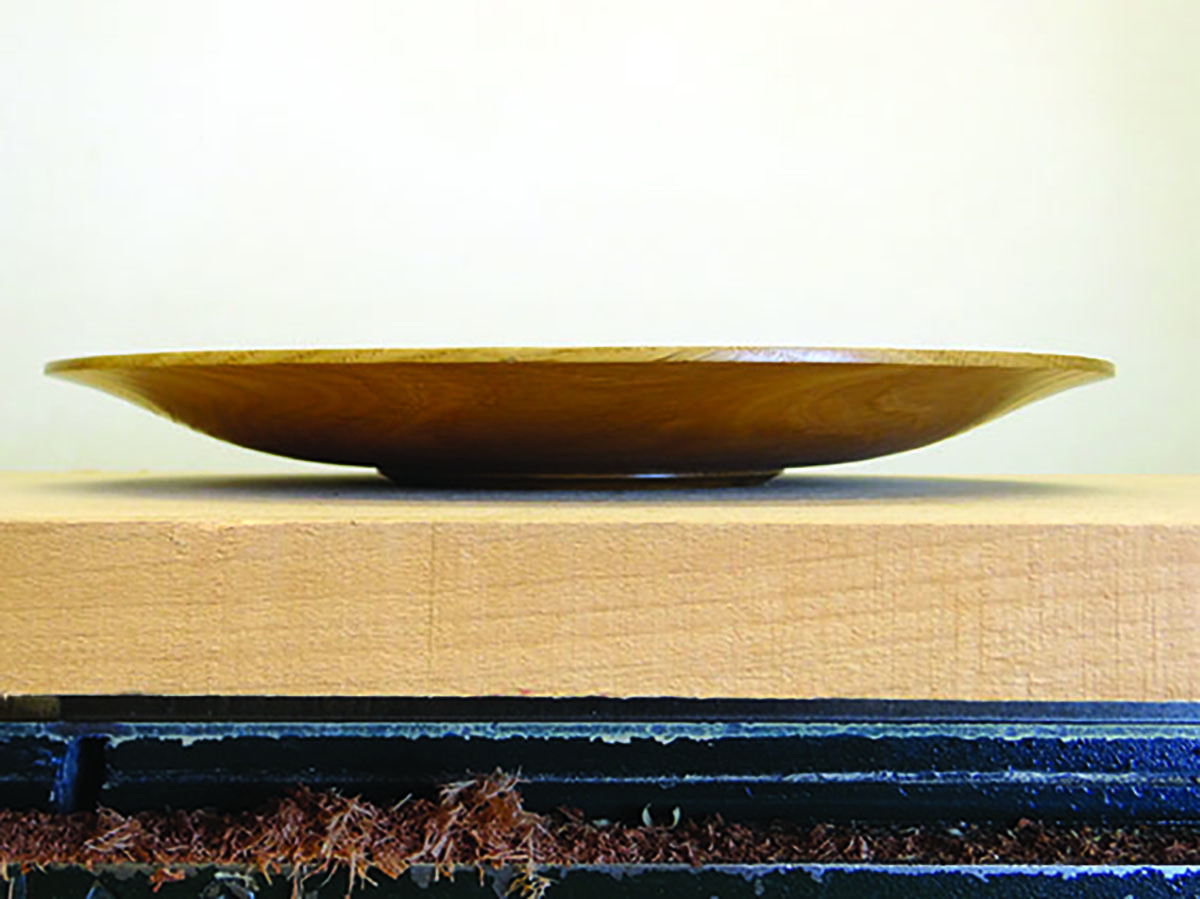 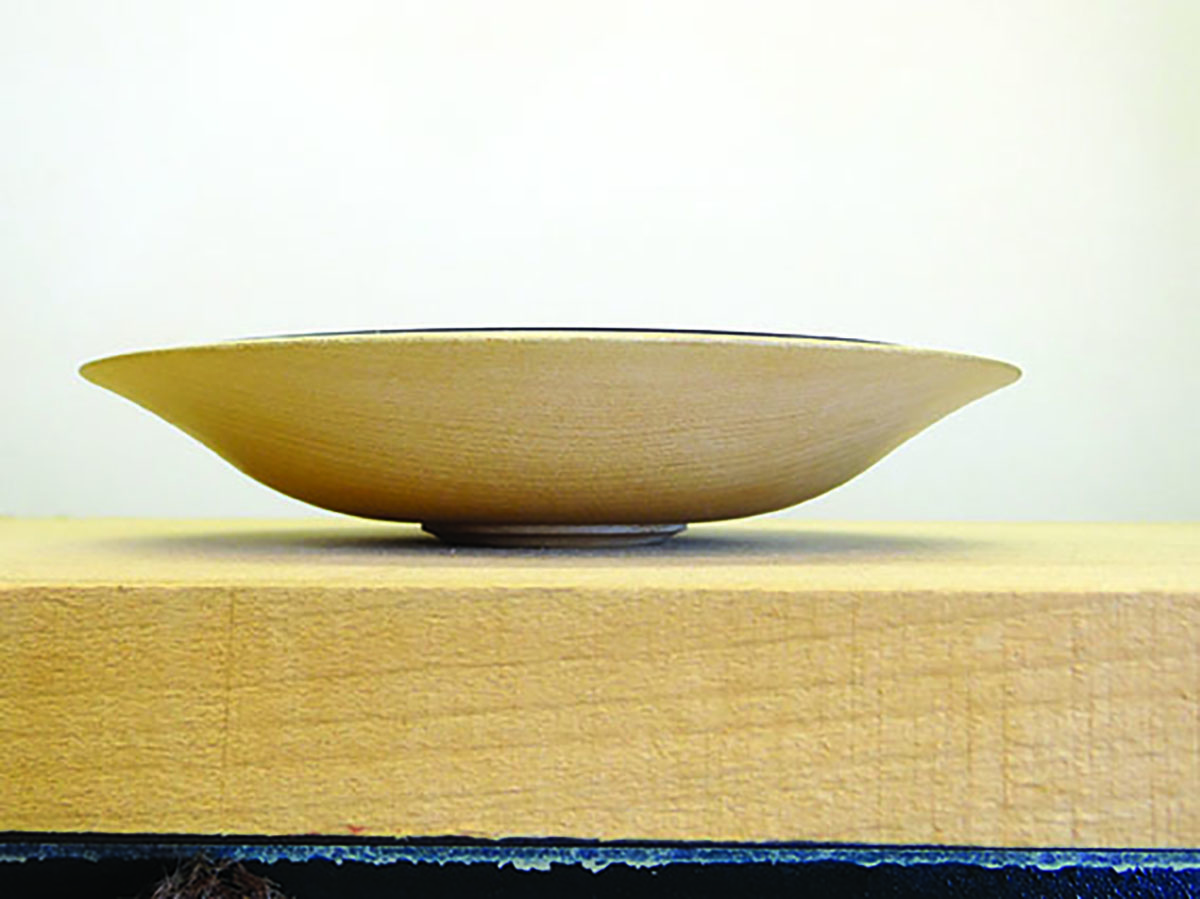 A maple (Acer saccharum) bowl, a very different shaped bowl to the platter, but the ogee works here too 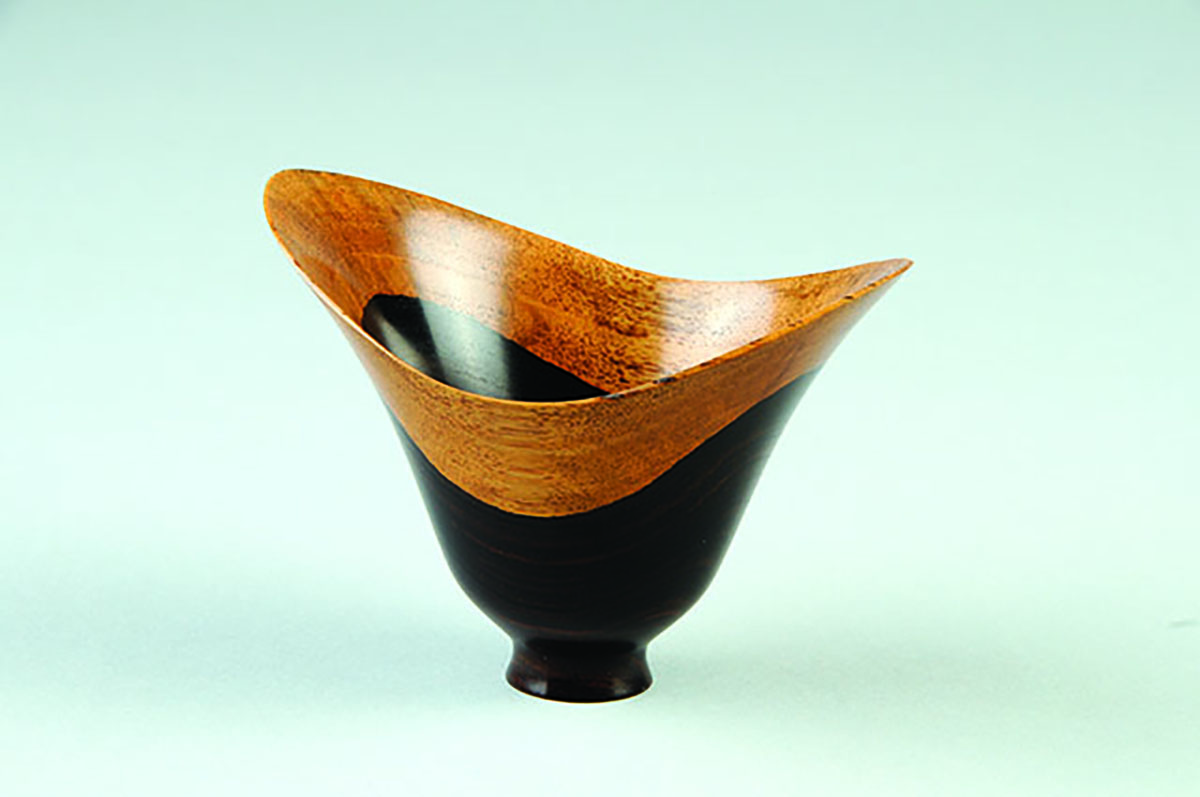 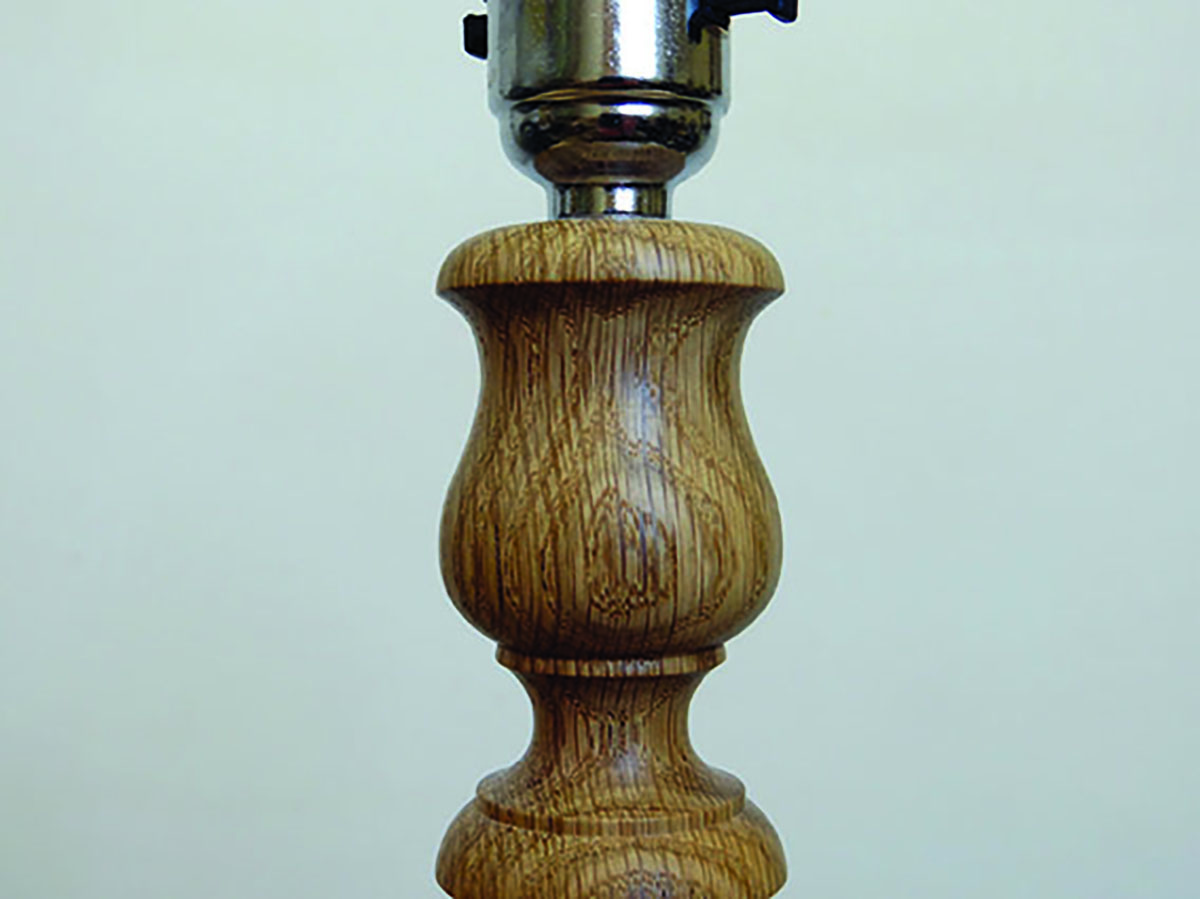 Example of a tulip form 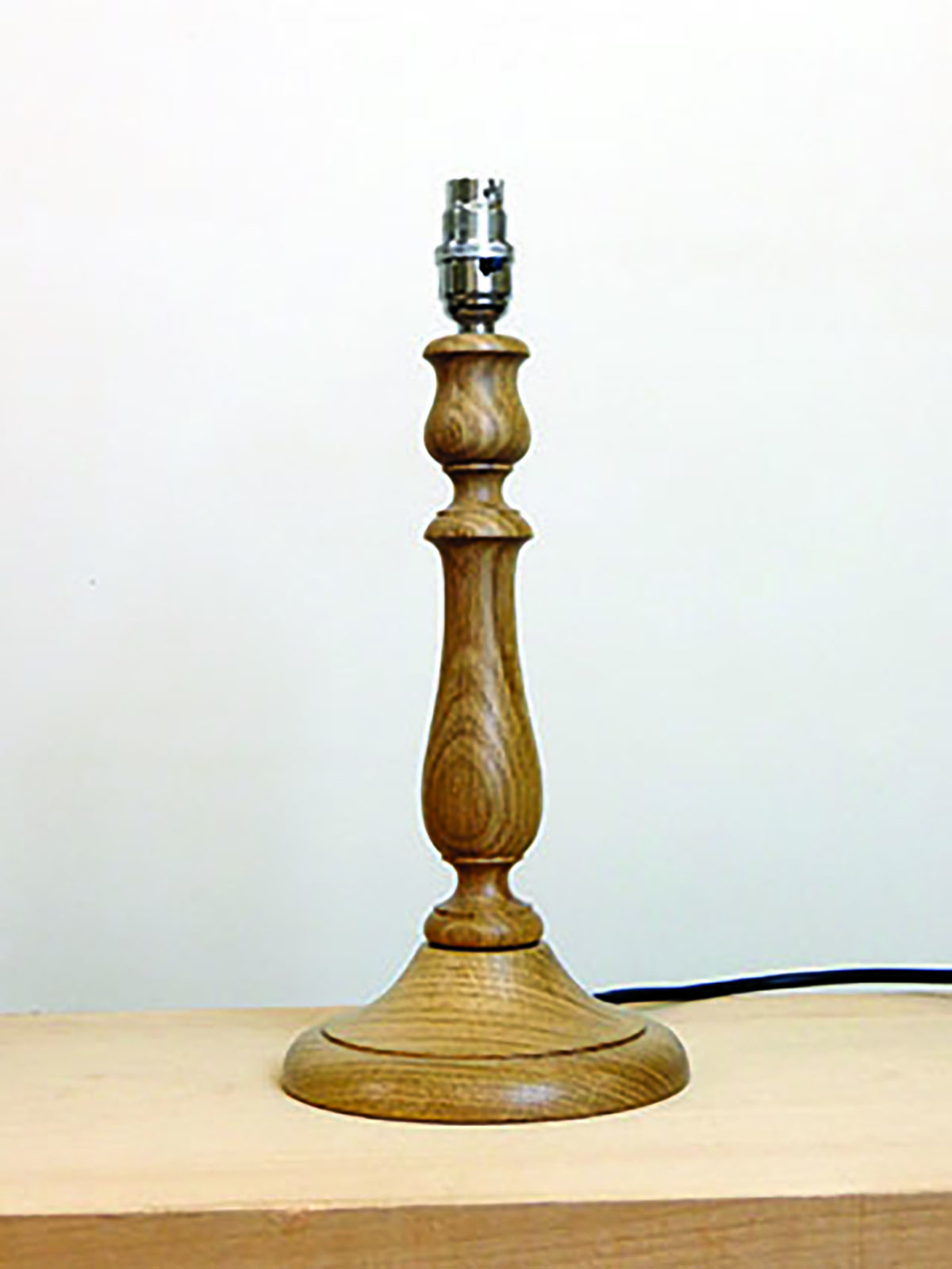 Overall view of the oak lamp

Other common details
You may come across the term ‘bird’s beak’ which could be confusing until you see the turned shape next to an actual bird’s beak, at which point it becomes very clear! Here you will see a turned bird’s beak, used on the oak lamp, next to an eagle. A necklace detail is one used near the top of a spindle, just set down from the top detail, as shown on the softwood spindle in the picture. It usually involves a bead of some sort. There are also other terms used to describe a bold feature detail on spindle work, such as trumpet shaped, heart shaped, onion shaped and urn shaped, all of which are quite literal translations of common forms used as wood turned features. 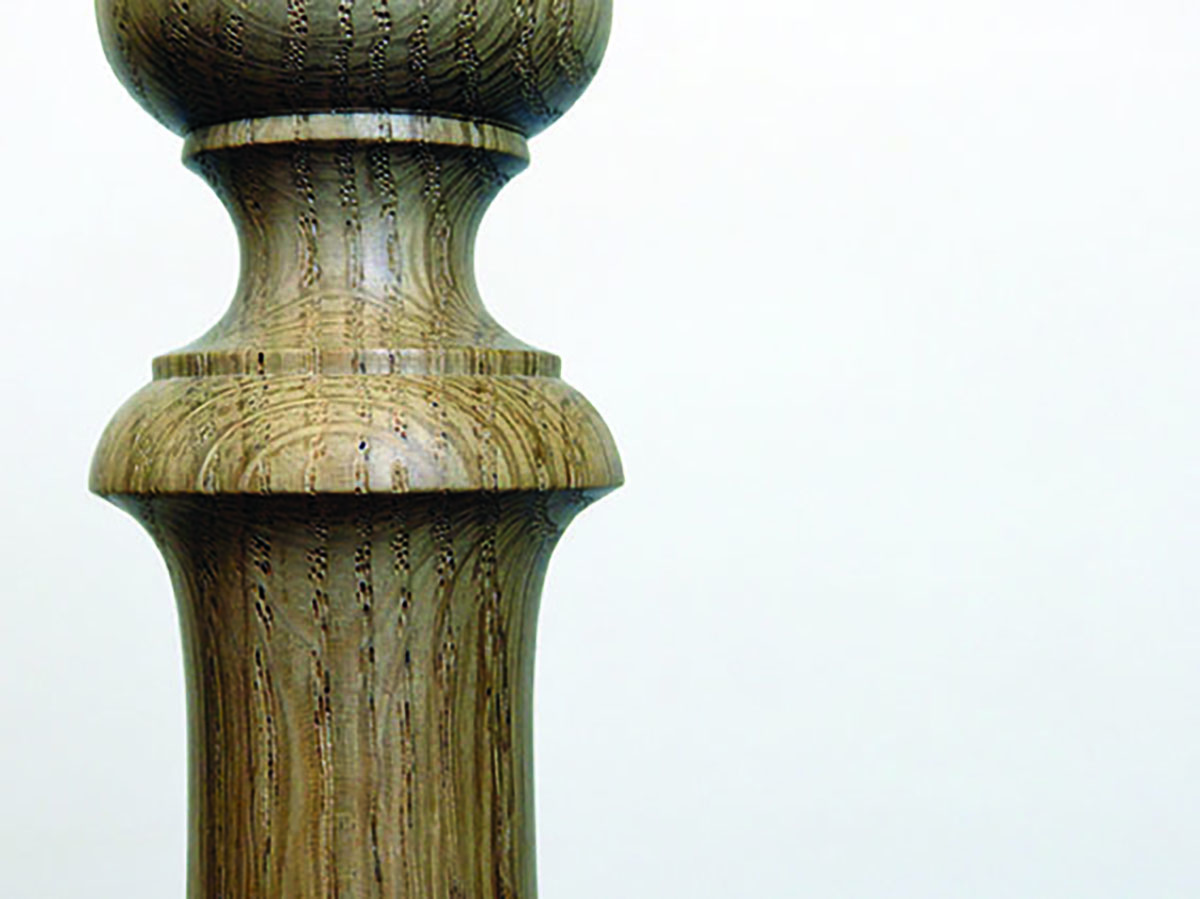 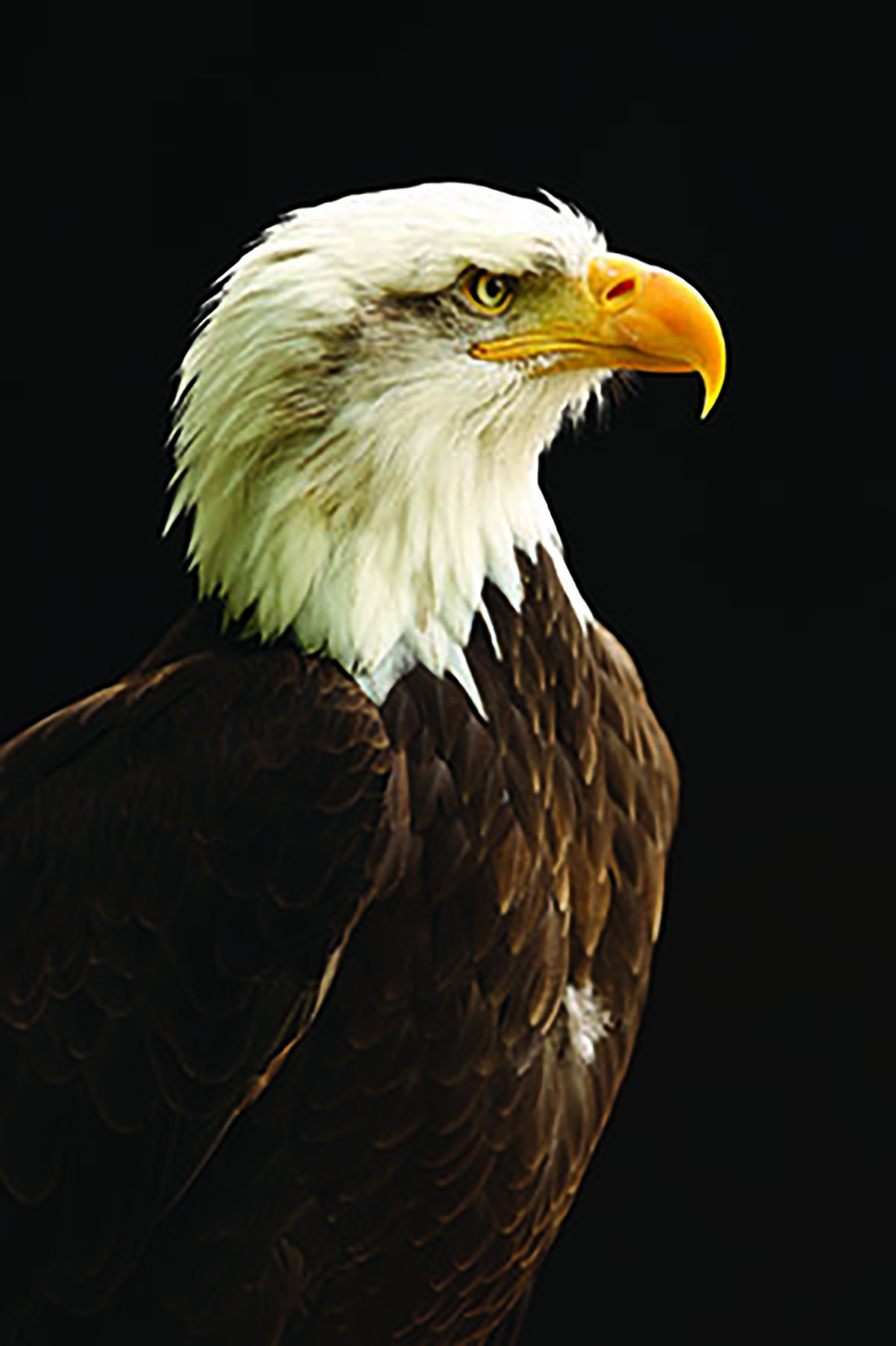 Shown next to an actual bird’s beak, the description becomes clear 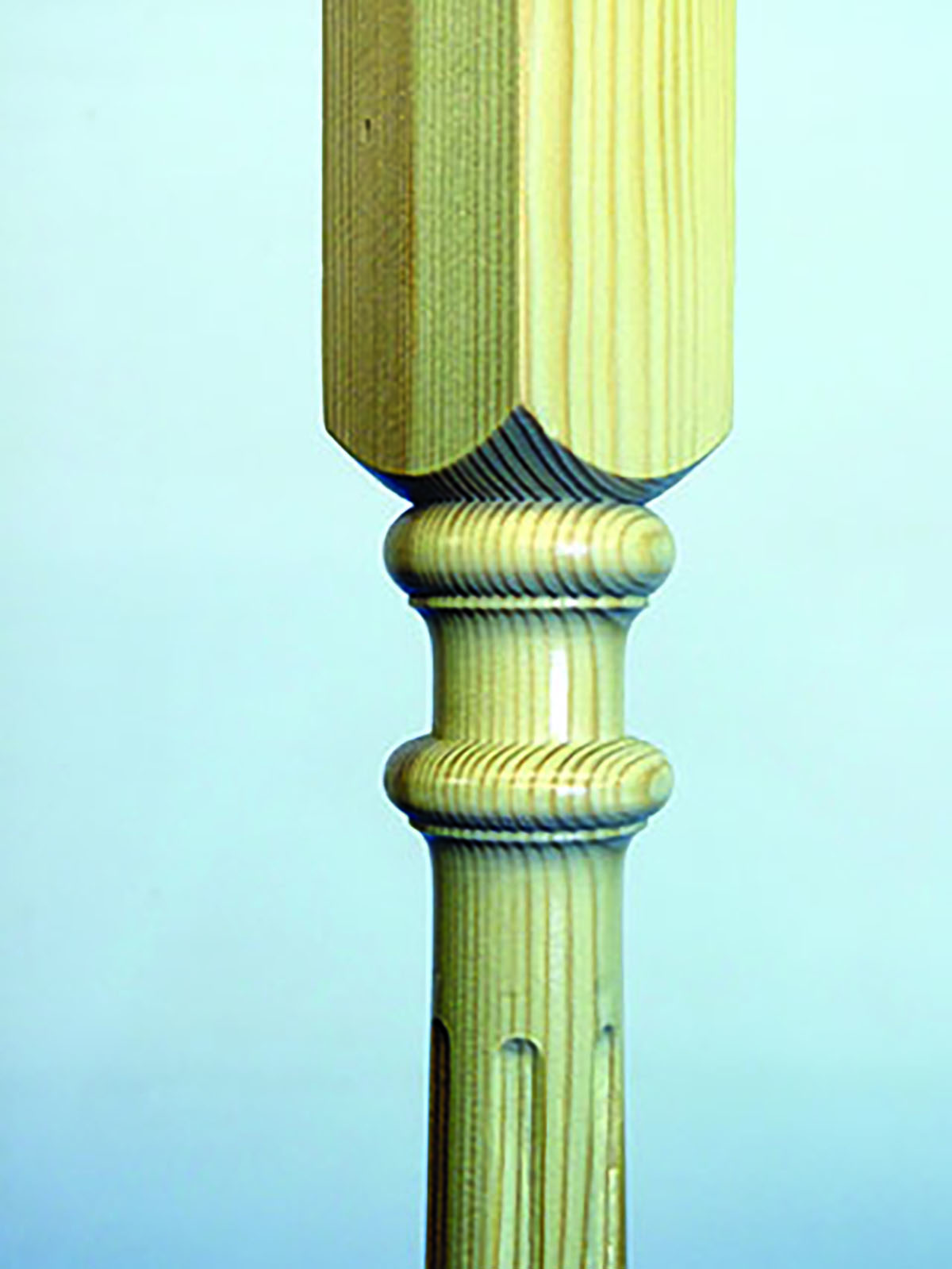 Necklace detail on a stair spindle, set down from the square pommel and first detail

Glossary of names of shapes
Ball: A spherical shape
Bead: Rounded shape usually slightly narrower than it is tall
Bird’s beak: A half bead combined sharply with a scotia to form a shape similar to a bird’s beak
Bobbin: A wider, stretched version of a bead
Bullnose: Sometimes known as a round-over is a held bead shape, usually found at the base of a turning, such as the oak lamp pictured above
Cavetto:  A hollow shape that is a half cove or quarter of a circle
Cove: A hollow U shape
Cyma recta: An ogee shape where the concave part is at the top
Cyma reversa: An ogee shape where the convex part is at the top
Flute: A cove that usually runs along a spindle – this is currently under Reed, but should appear under its own heading
Necklace: A detail set down from the top detail on a spindle, often a bead, fillet an small scotia
Ogee: A flowing S-shape
Ovolo: A moulding similar to a bullnose but usually used as an edge mould, with a fillet either side of it to give definition – used as the edge mould on the four lids of my oak jewellery box
Pommel: The square section often found at the top of a furniture leg and at both ends of a stair spindle
Quirk: A V-shaped cut that separates and defines details
Reed: A group of narrow beads that usually run along a spindle
Reel: A stretched shallow cove
Ring: A narrow version of a bead
Sausage: A stretched bead shape with a straight portion and rounded ends that resembles a sausage
Scotia: A lopsided cove
Tulip: A shape made up of a combination of a round and hollow to form a shape loosely resembling the flower of a tulip 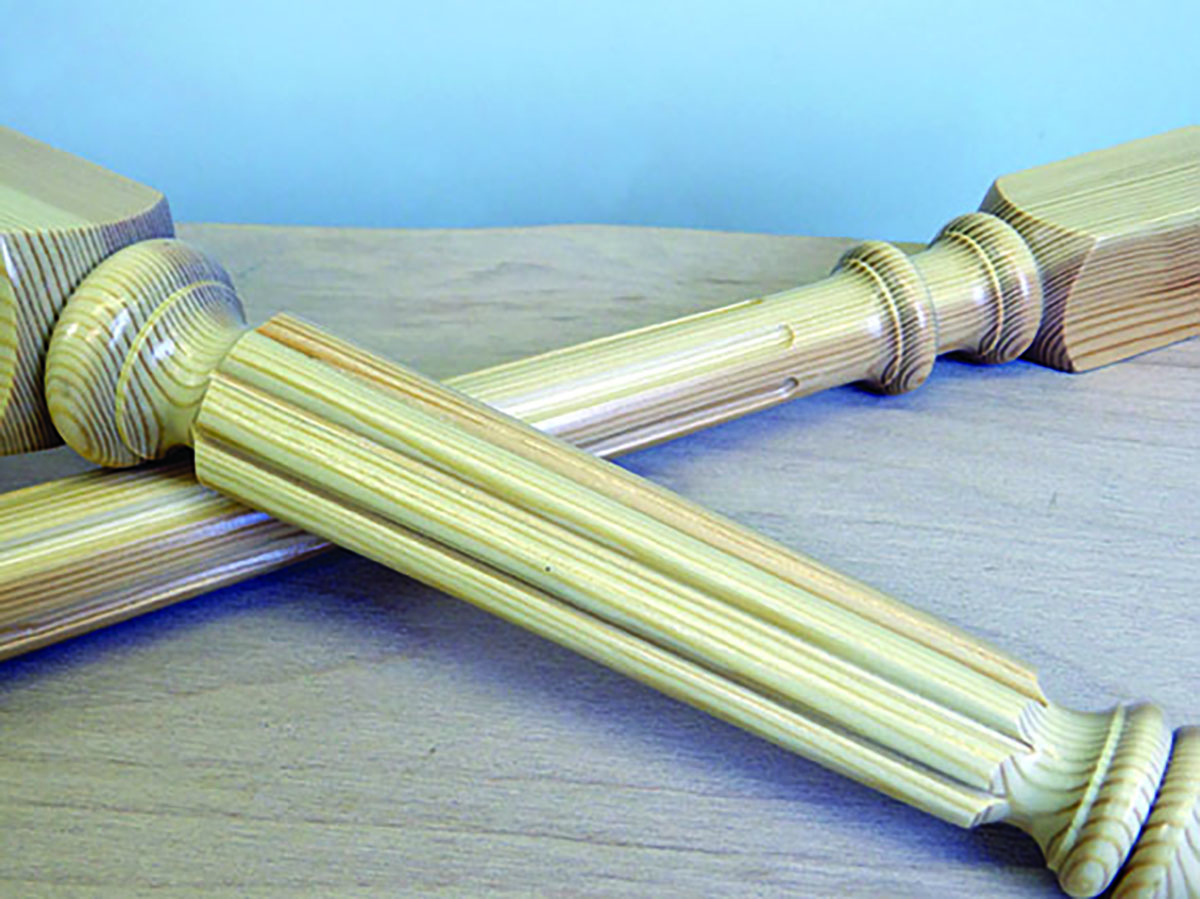 Flutes and reeds run along a spindle 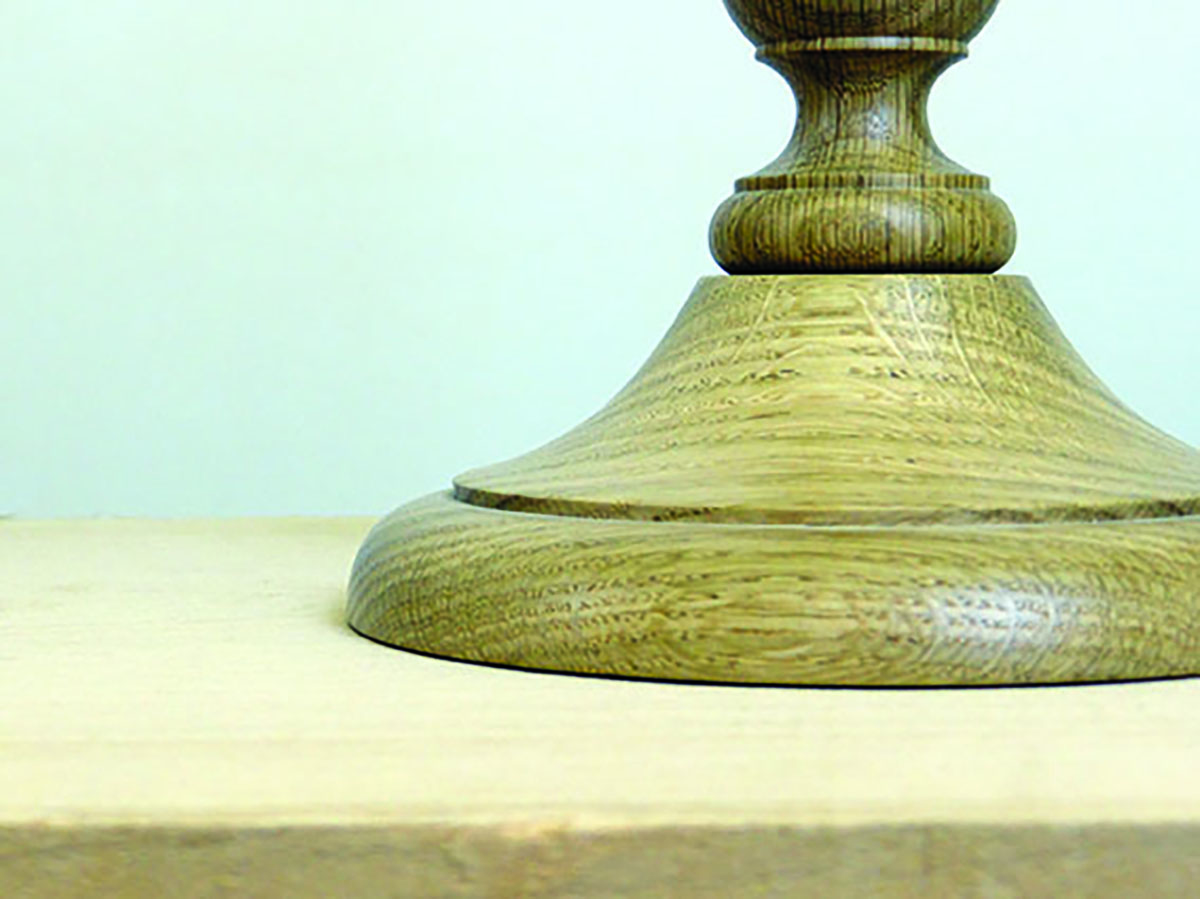 This lamp base features a turned bullnose detail 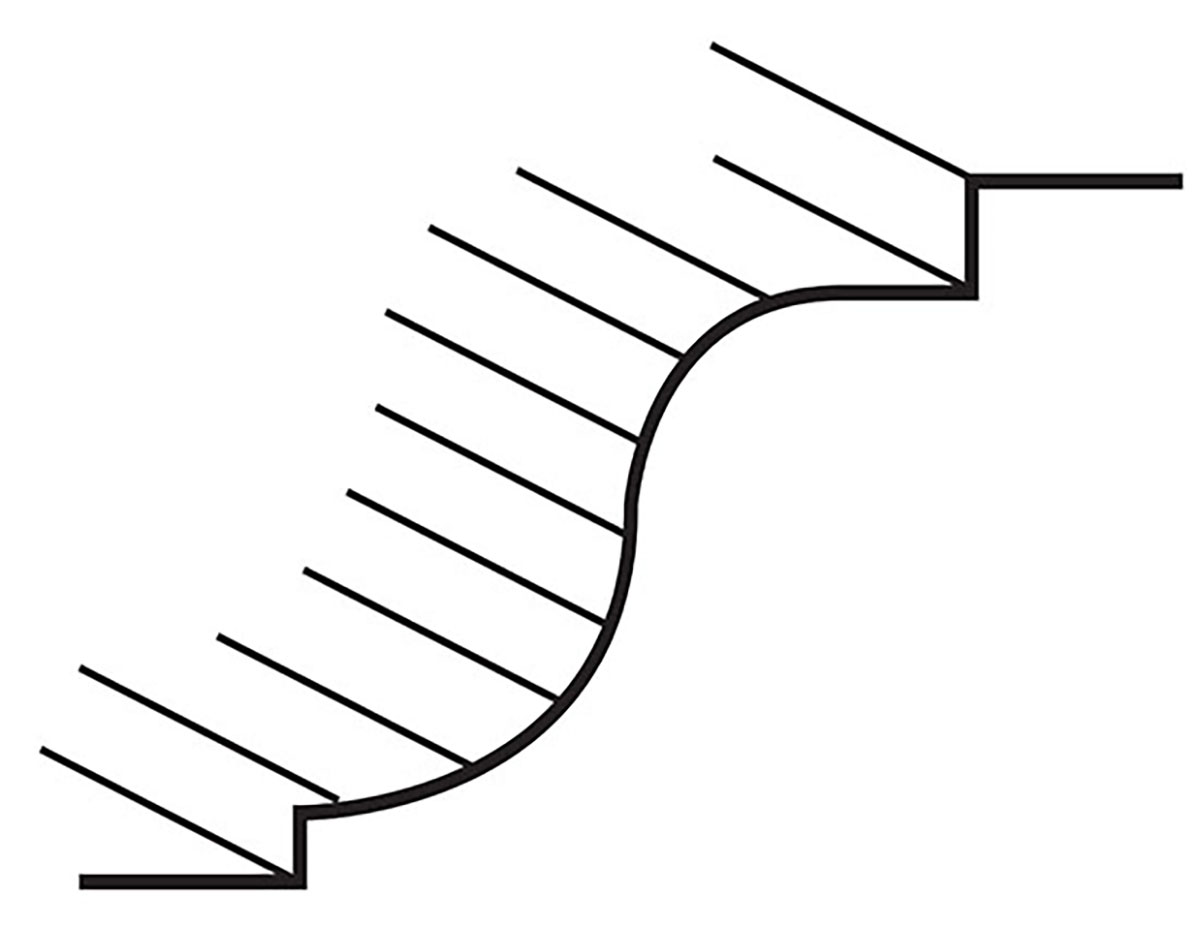 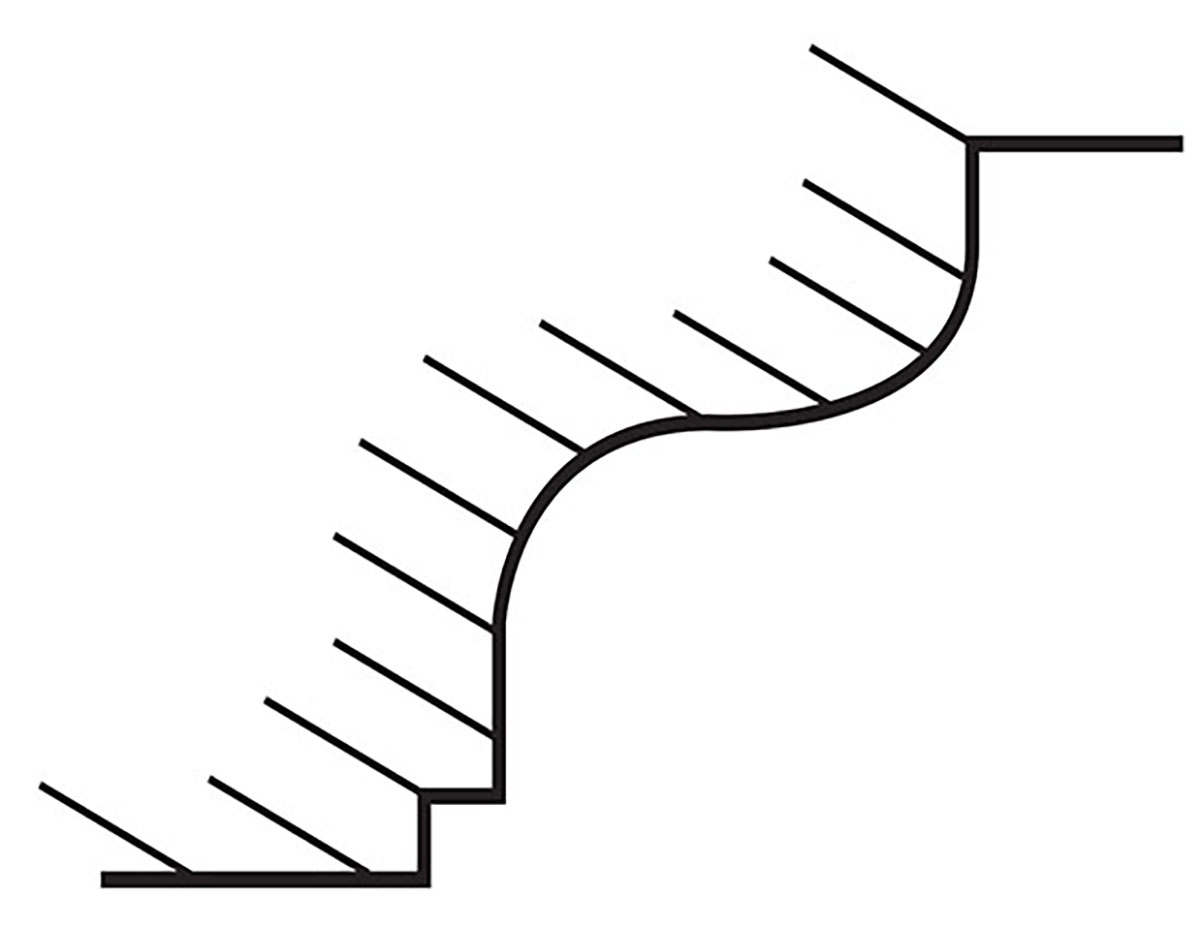 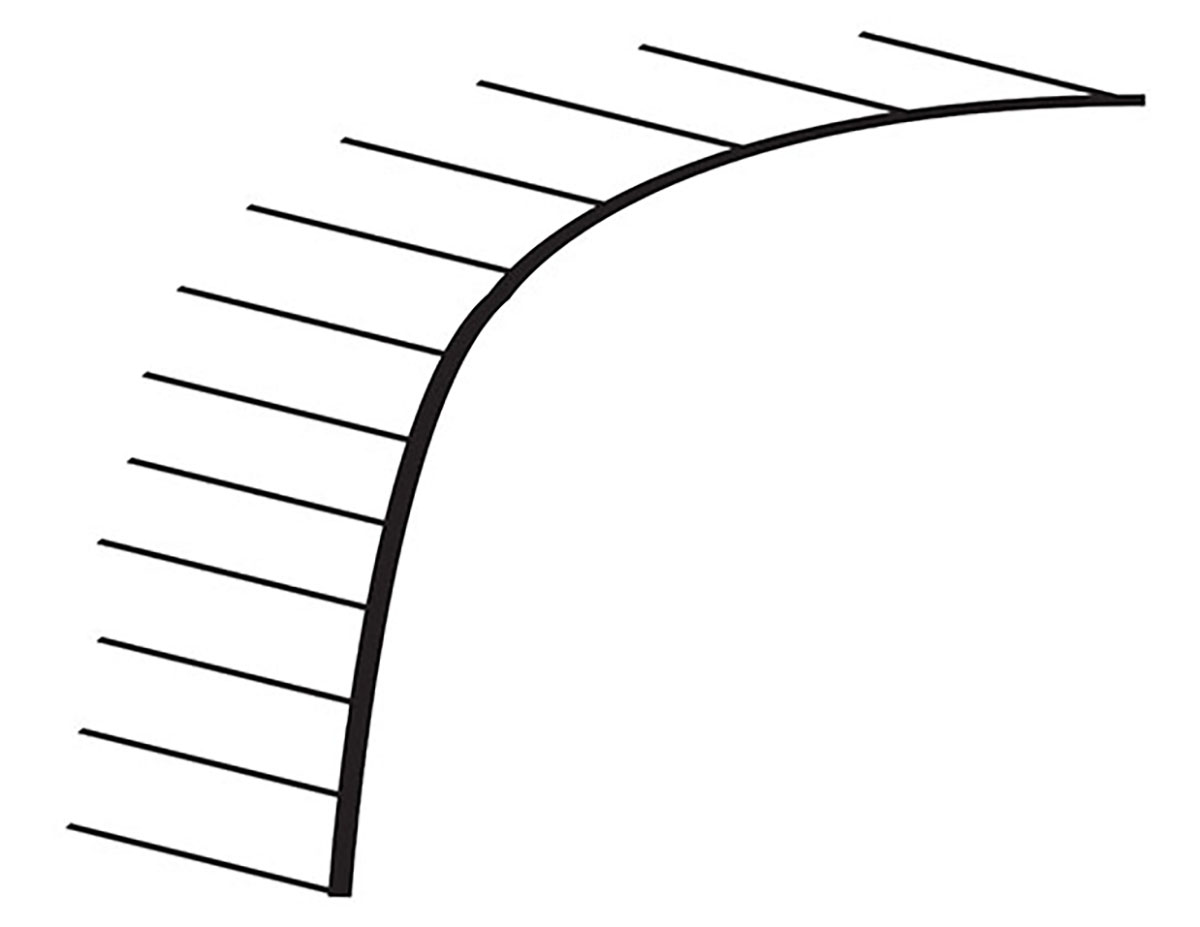