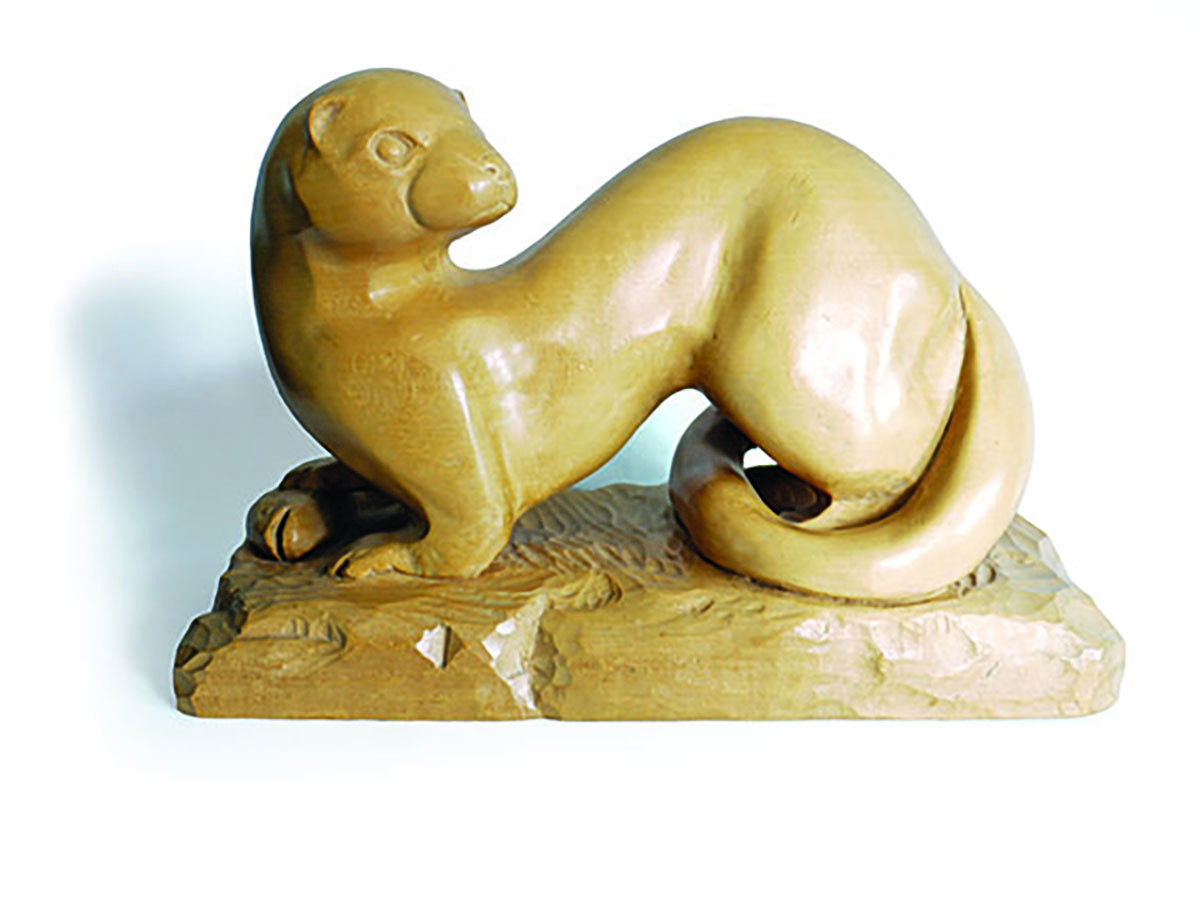 When I was a boy, my playground was the water meadows around Winchester in Hampshire, through which flows the famous trout river, the Itchen. I spent a lot of time with my brothers and our friends playing and fishing around the whole area, and one day when I was on my own, I saw two otters hunting downstream. I froze and watched for quite a time, it is a memory that will always stay with me. They are such playful creatures that they are great to watch. They are much loved in the UK, despite their reputation for catching trout and other fish on prize trout rivers. Because of this they were hunted and killed for many years but they are now fully protected and are making a comeback in the rivers of England, and in 2011 otters have been seen in the water mill in the middle of Winchester on the Itchen. I have carved many otters over the years in different poses and will share several of them with you here.

Lime otter
This otter, made in 1974, was carved in lime (Tilia vulgaris) and was the first otter I ever carved. In fact, it was about the fourth carving I ever made and for that reason I have kept it. The colour of the lime has nicely mellowed over the years to a honey-like patina, and I usually bring it out at carving shows. It is 292mm long x 190mm high x 140mm wide. The pencil sketches shown here have been reduced in size to fit on the page but the otter can of course be carved to whatever size you prefer. 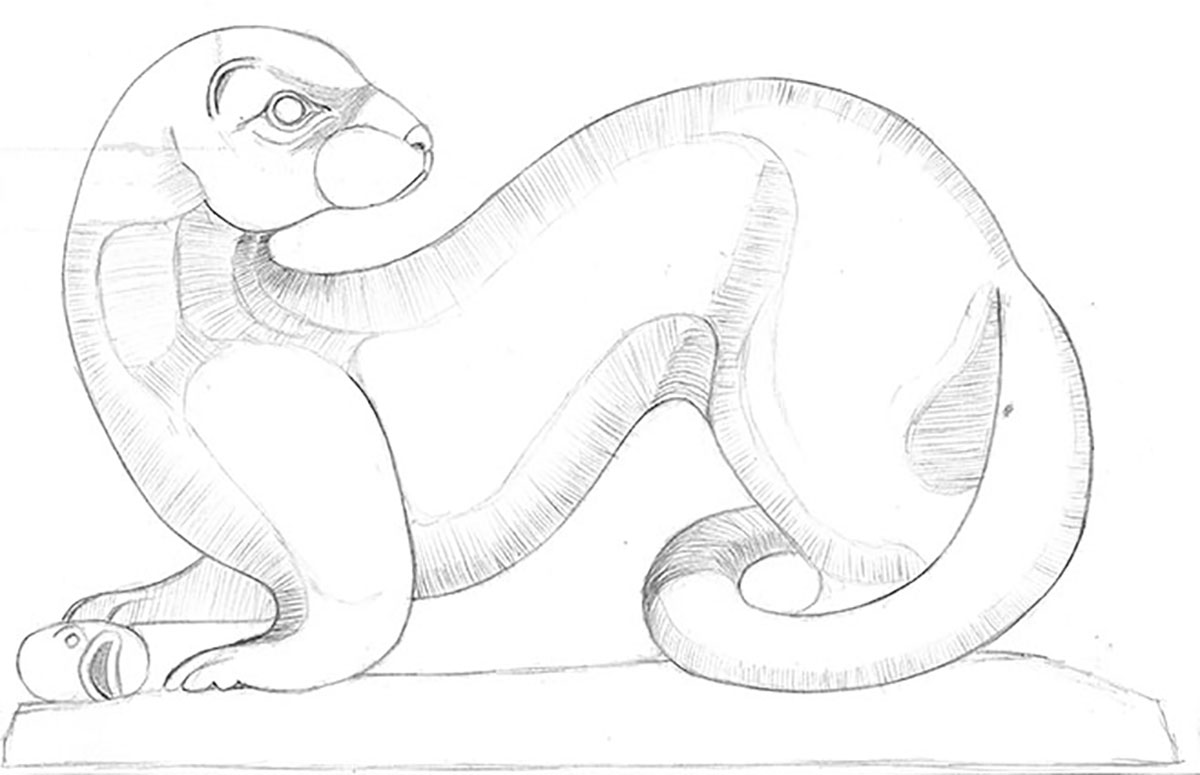 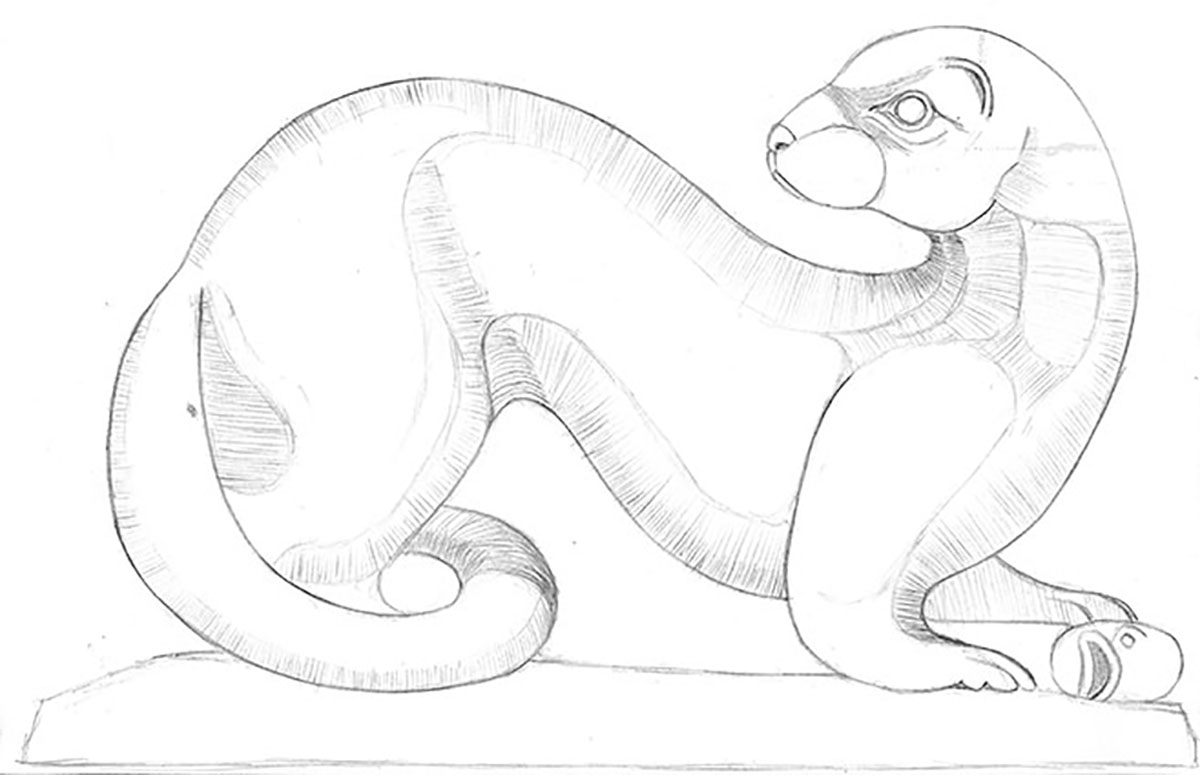 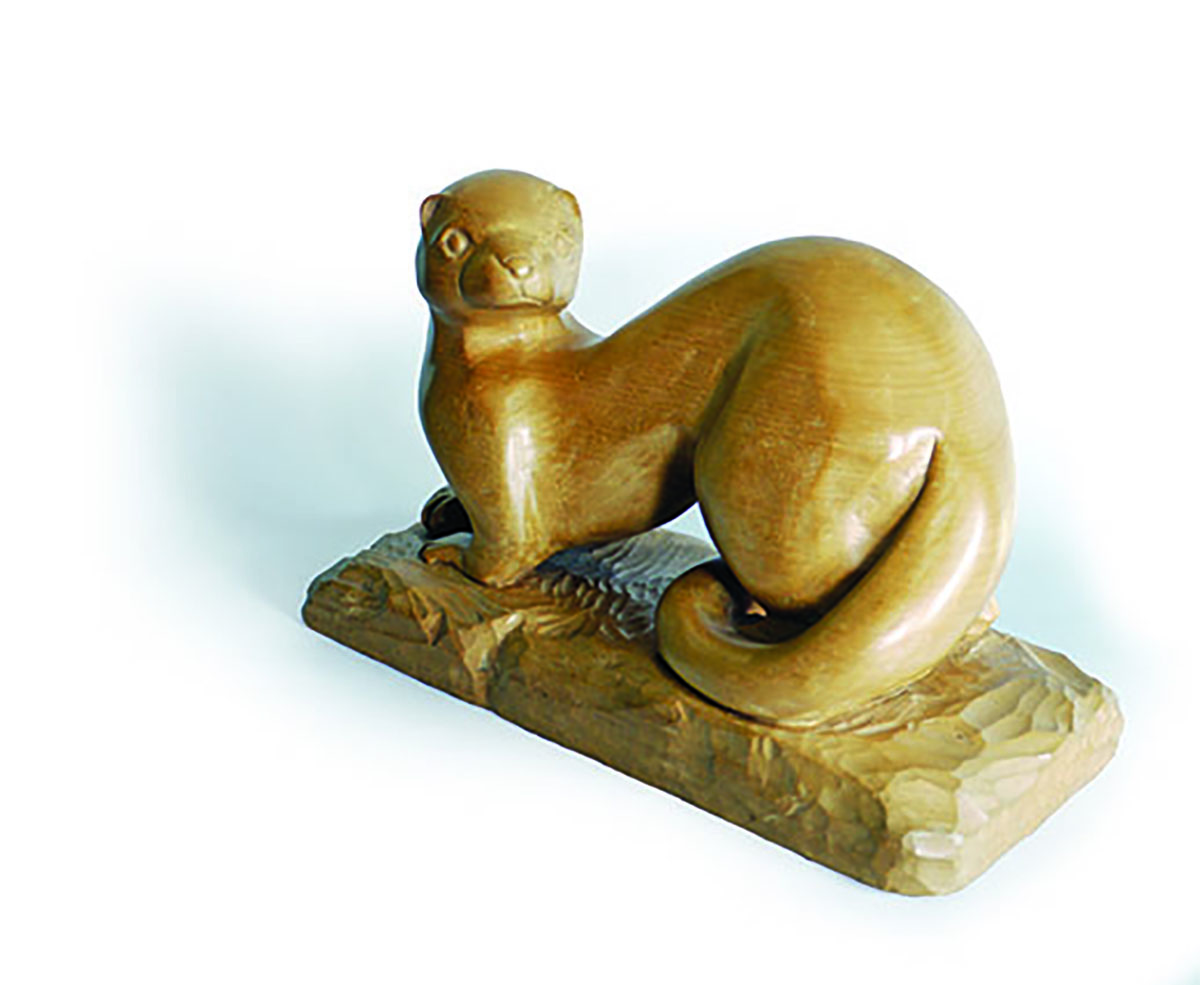 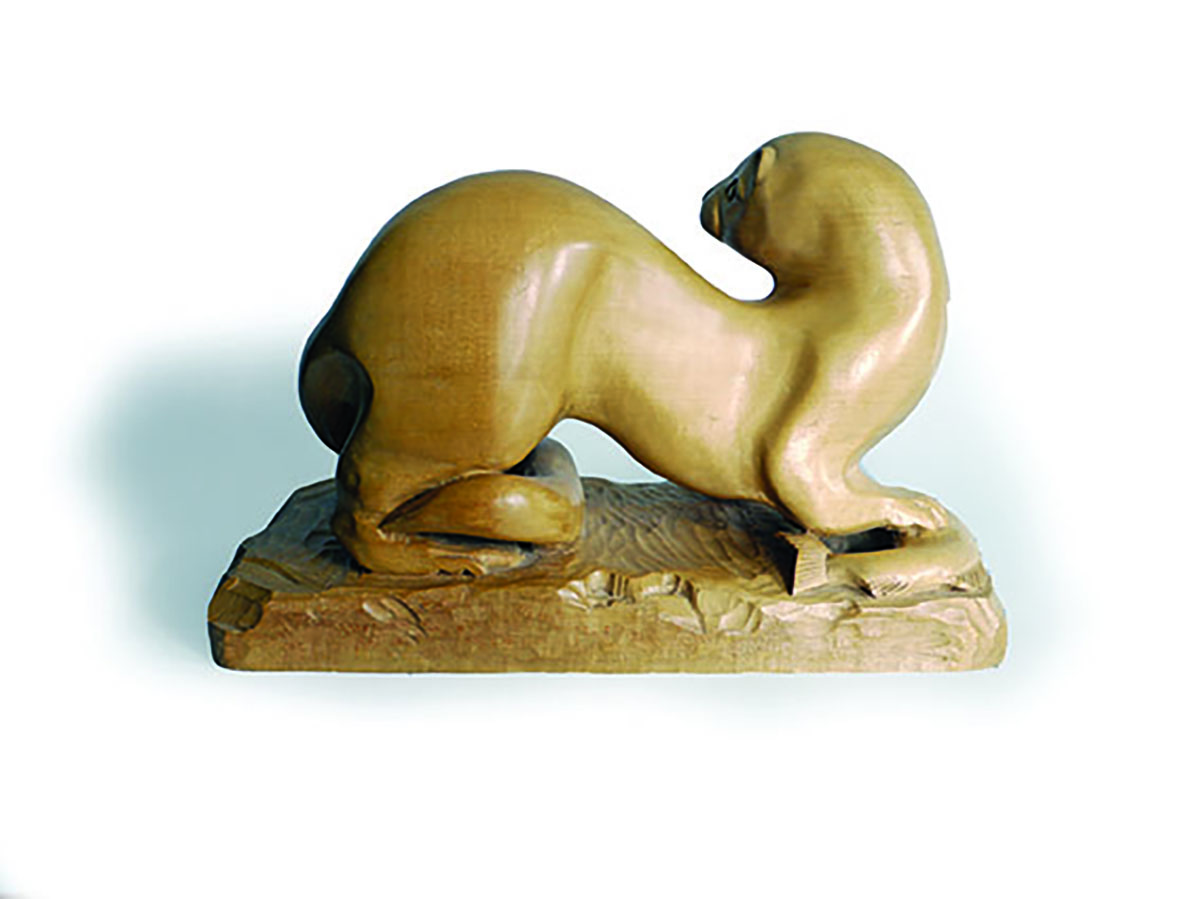 Otter ball
This design is of an otter on its back with the tail looped around its body to form a ball shape. It is an unusual stance but one that I think shows the animal’s playful nature. I have carved this design quite a number of times and people seem to like it. The versions shown below were made in mahogany (Khaya ivorensis) and sweet chestnut (Castanea sativa) but I have also carved this design in walnut (Juglans regia), oak (Quercus robur) and yew (Taxus baccata). I gave them a smooth polish to make them look as though they are wet. The dimensions of this carving are 165mm long x 125mm high x 70mm wide, but I have used a wider wood on several occasions. I have also carved it at about twice this size in yew. 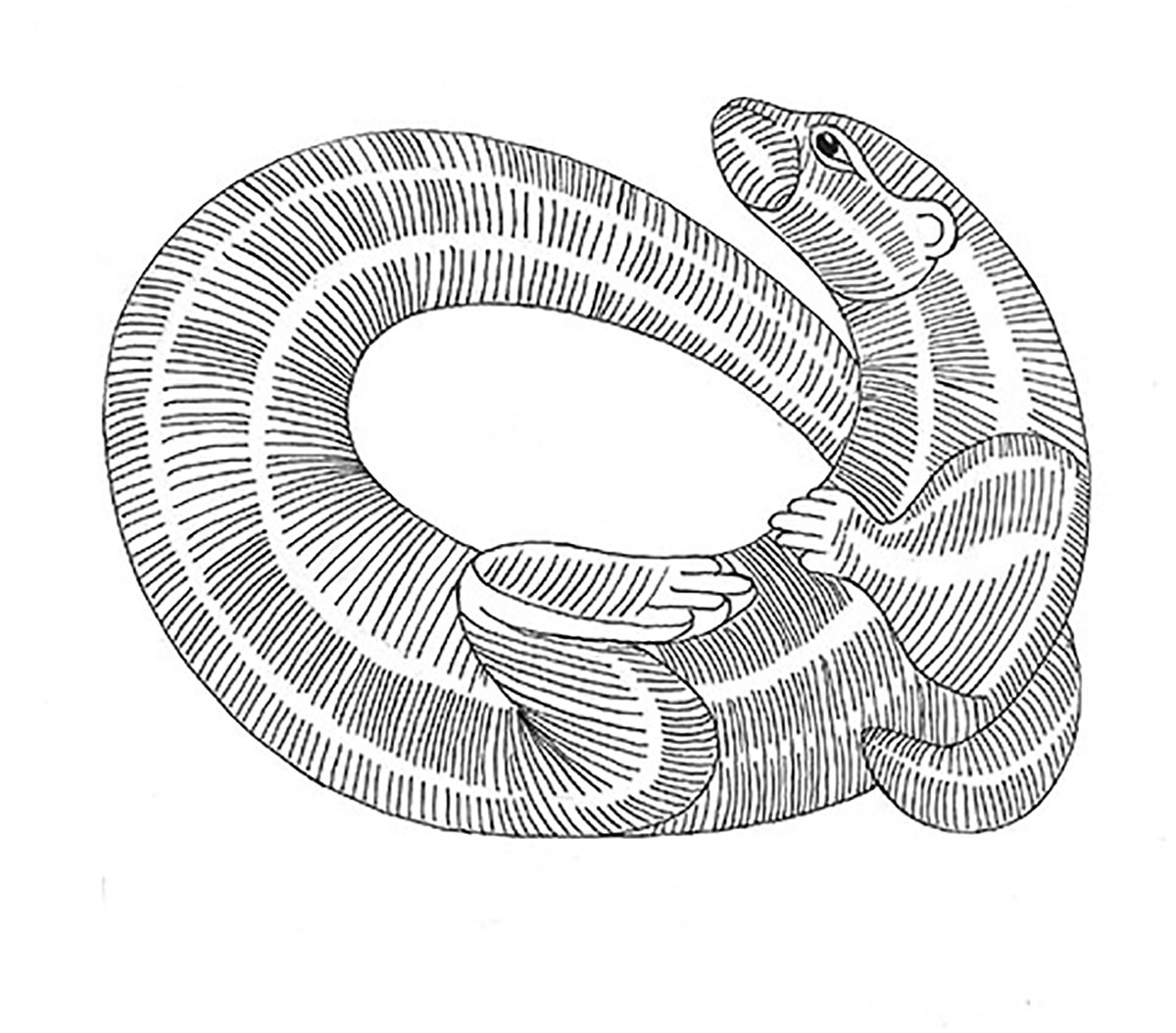 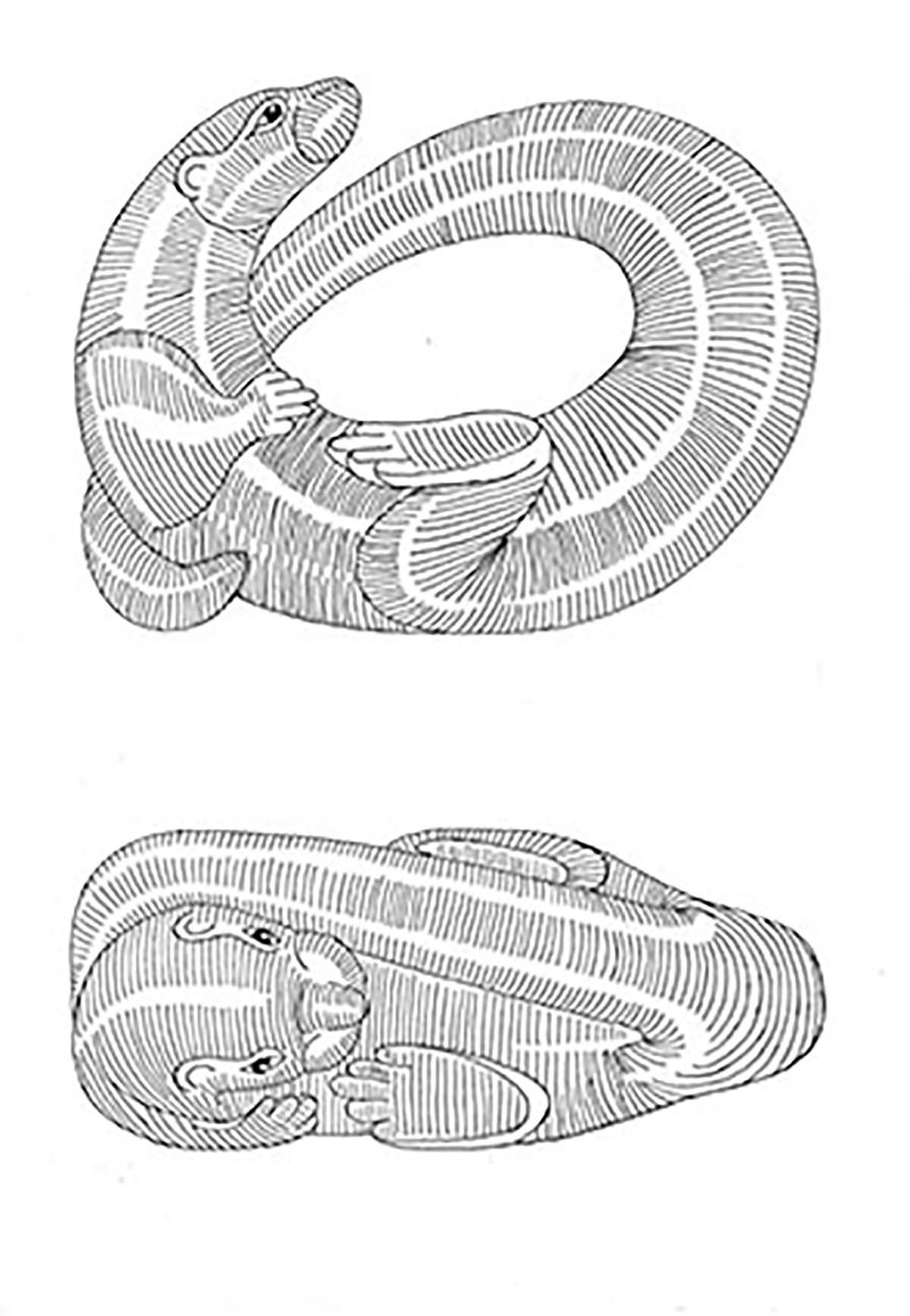 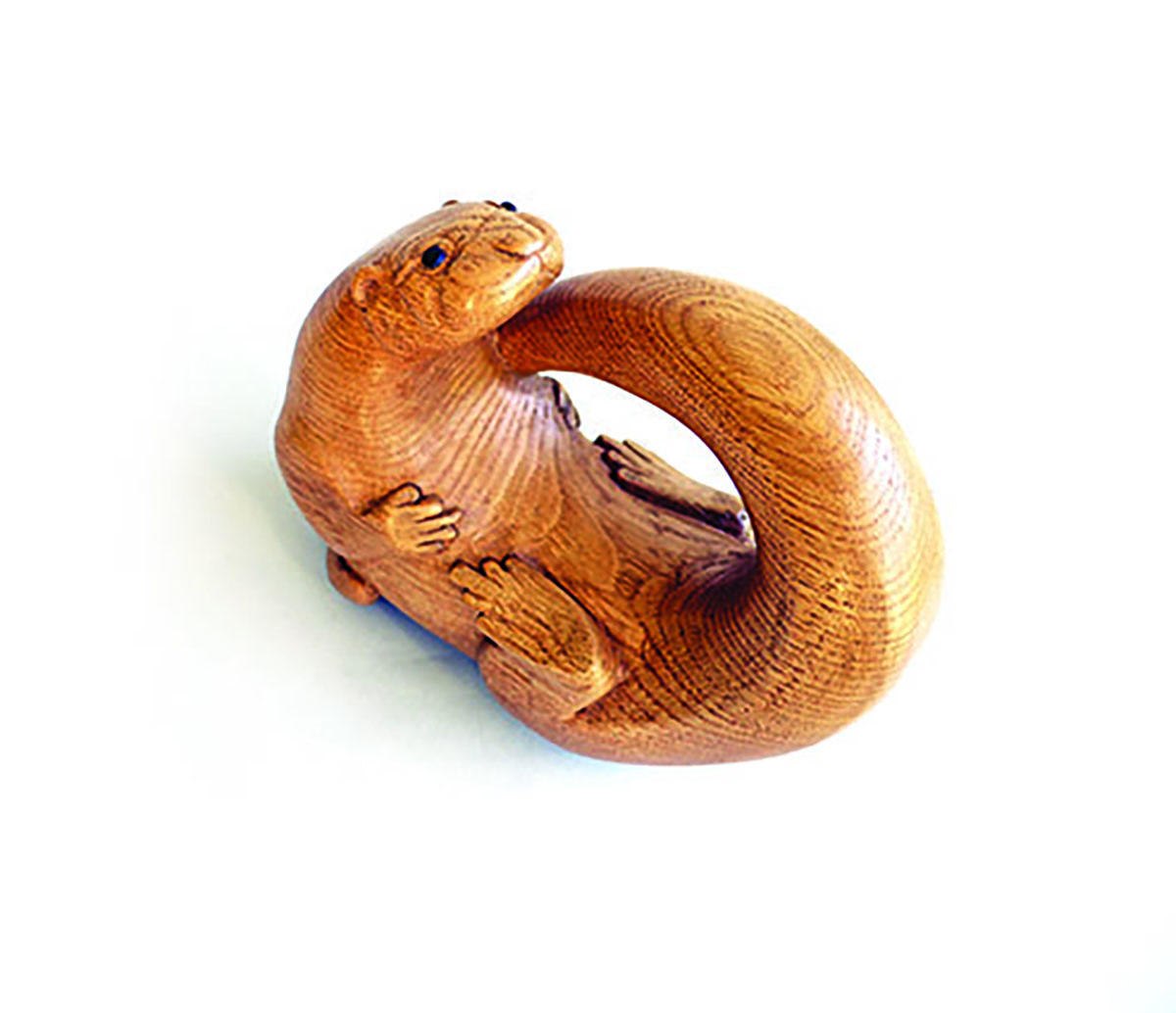 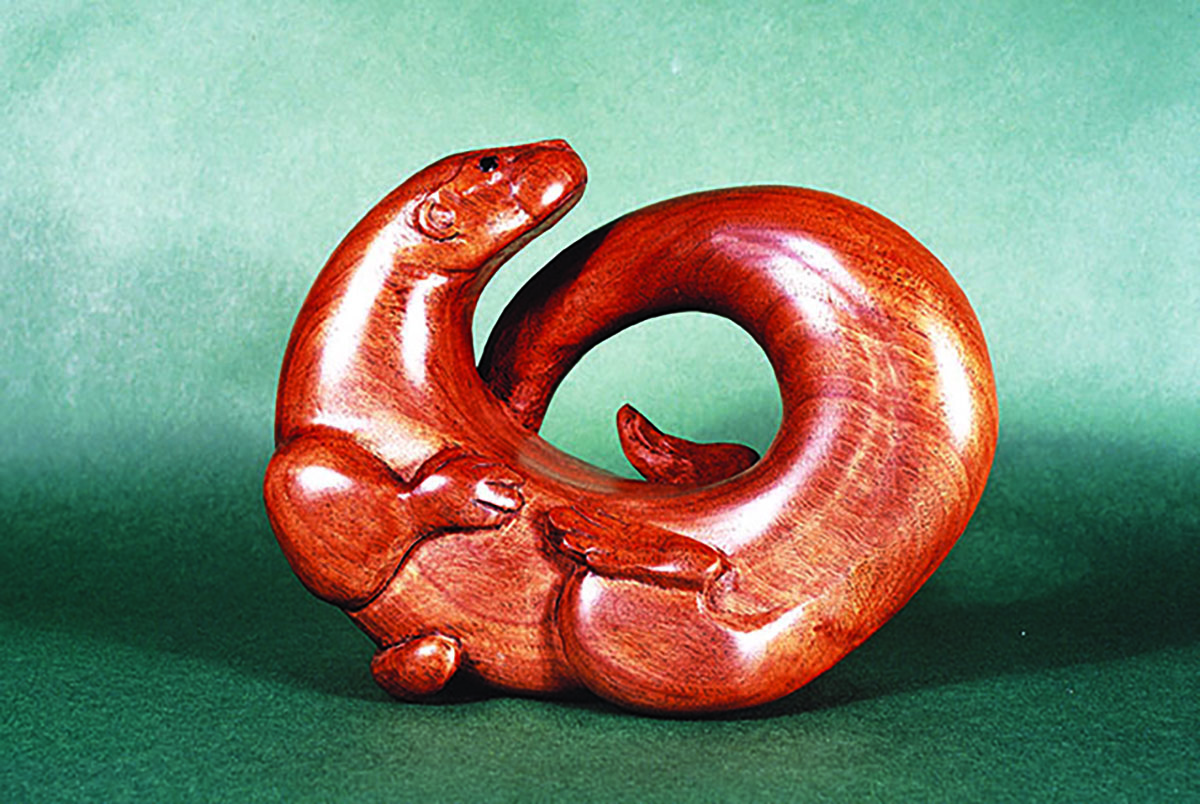 Oak otters
These two otter carvings are approximately the same size at 300mm long x 125mm high x 100mm wide. They are both carved in oak and show otters entering the water from a river bank. These were some of my early carvings when I didn’t inlay eyes but carved them out of the original wood. The tail in each otter is turned in opposite directions. I have carved many otters to this design and make small changes in each just out of interest. Sometimes I curve the body and tail one way, and sometimes the other. If you are lucky, nice medullary rays will appear when sanding the oak, as with one of the examples shown here. In trying to make them look sleek and wet, I sand the bodies of the otters so that they are really smooth, and then polish them with a clear wax such as shoe polish or Renaissance wax. The otters could equally well be carved in cherry (Prunus avium), lime, walnut, apple (Malus sylvestris), pear (Pyrus communis) and many other woods. 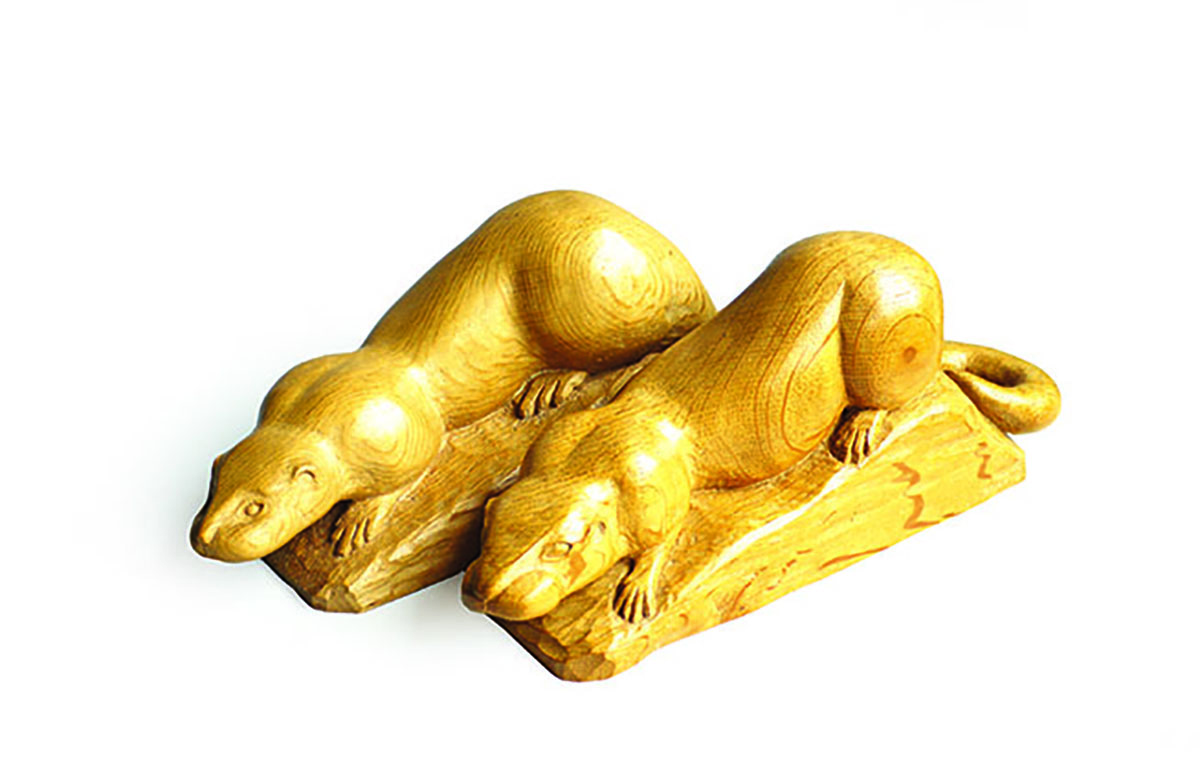 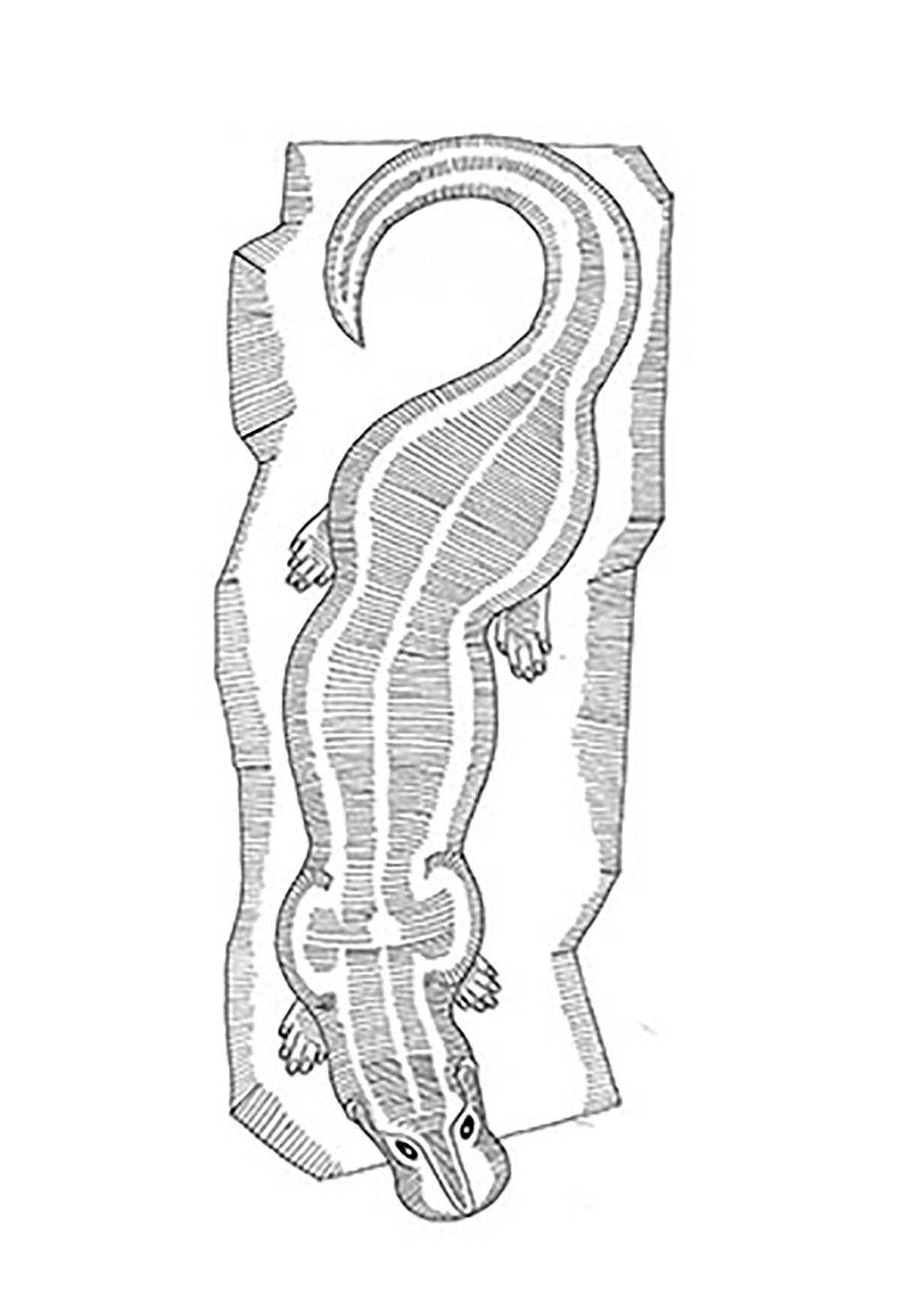 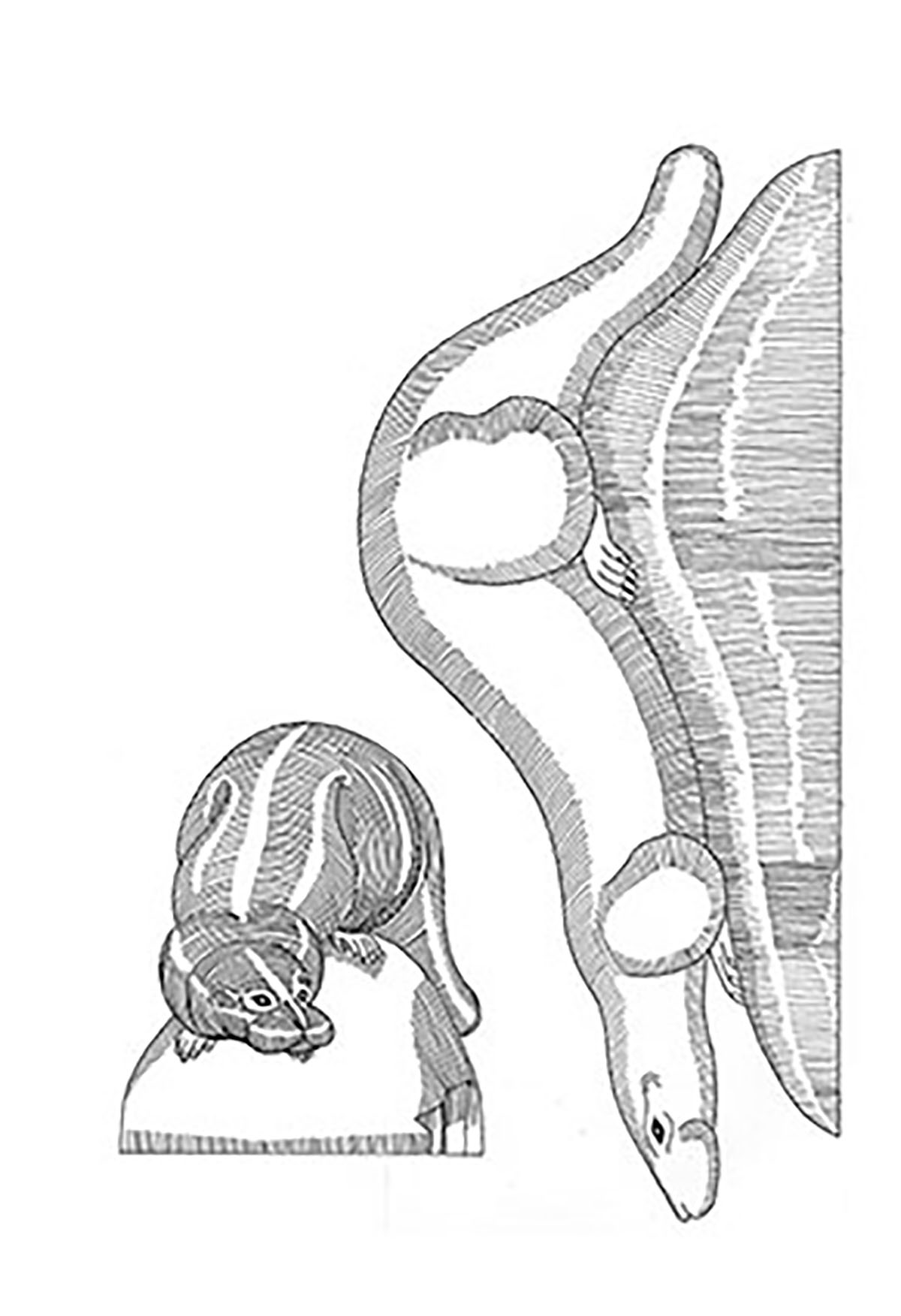