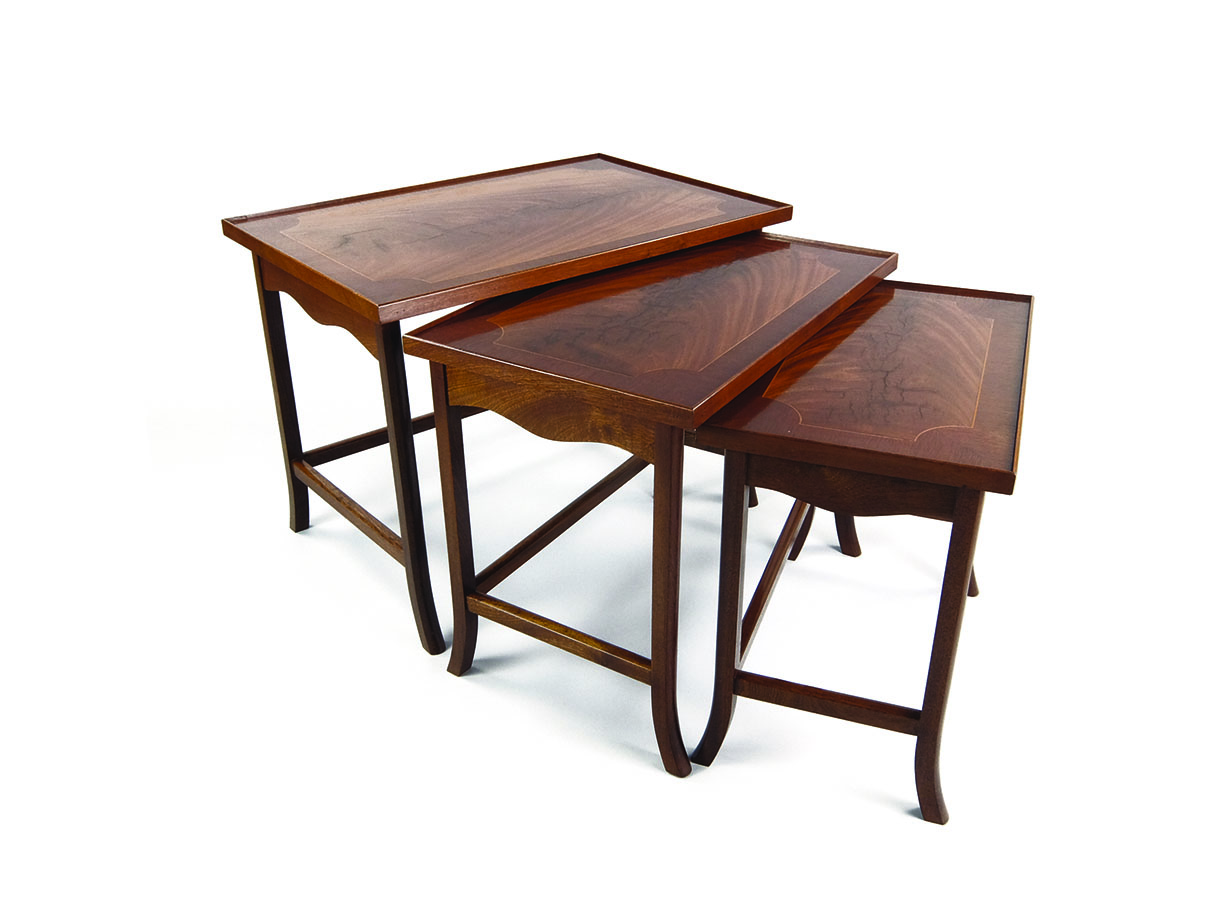 This nest of tables was made some years ago to complement a client’s existing furniture. Designed around the requested size of the large table, they were made from Brazilian mahogany (Plathymenia reticulata) timber and veneer. Recently, however, the client decided to refresh them and have the tops veneered. I did this by hand, but as veneering is an extensive subject, I will endeavour to explain the different methods you can use depending on the equipment you have available. 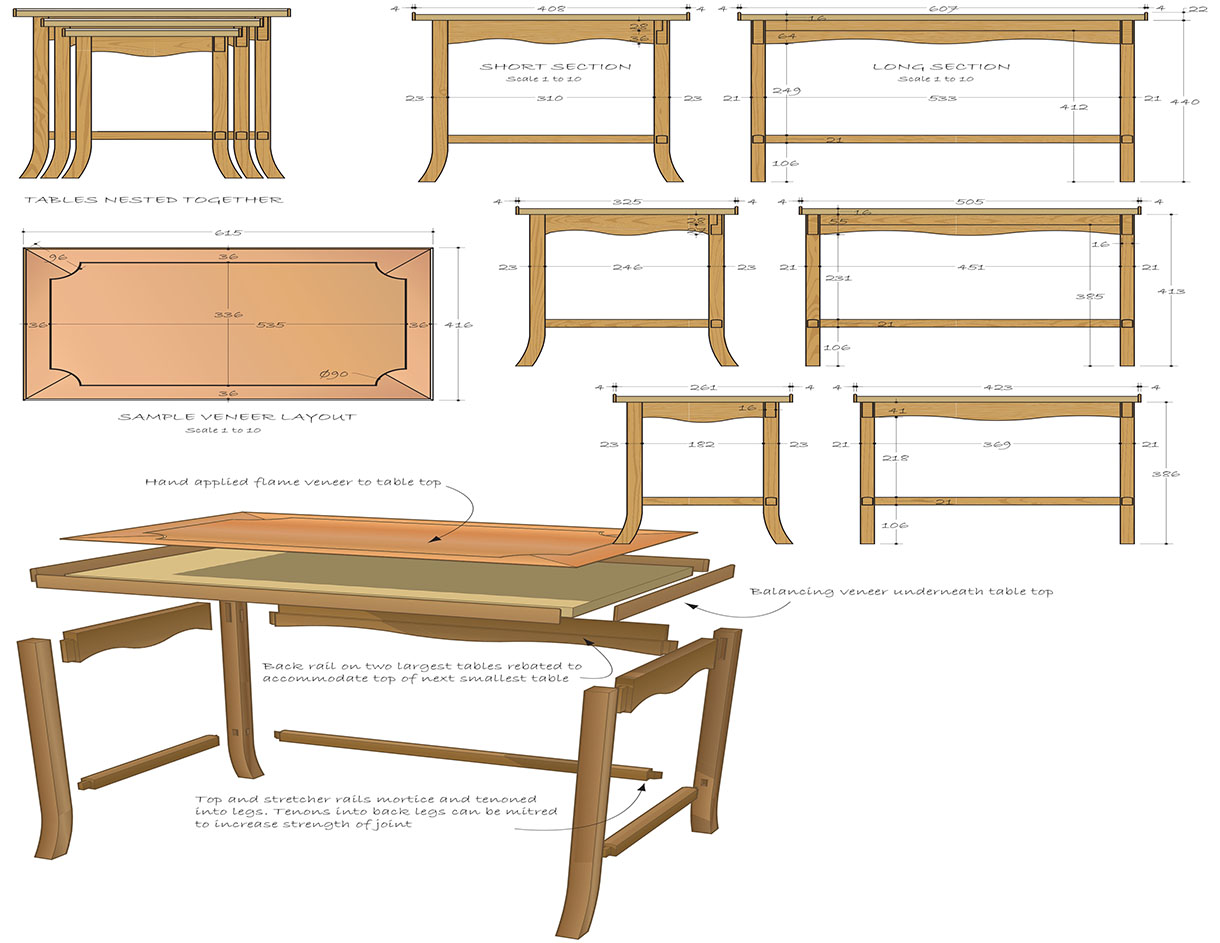 Veneer hammers
These can be simply made from beech and a piece of brass. I made these two hammers about 30 years ago and they have served me well. Alternatively, you can purchase a 100mm wide hammer. 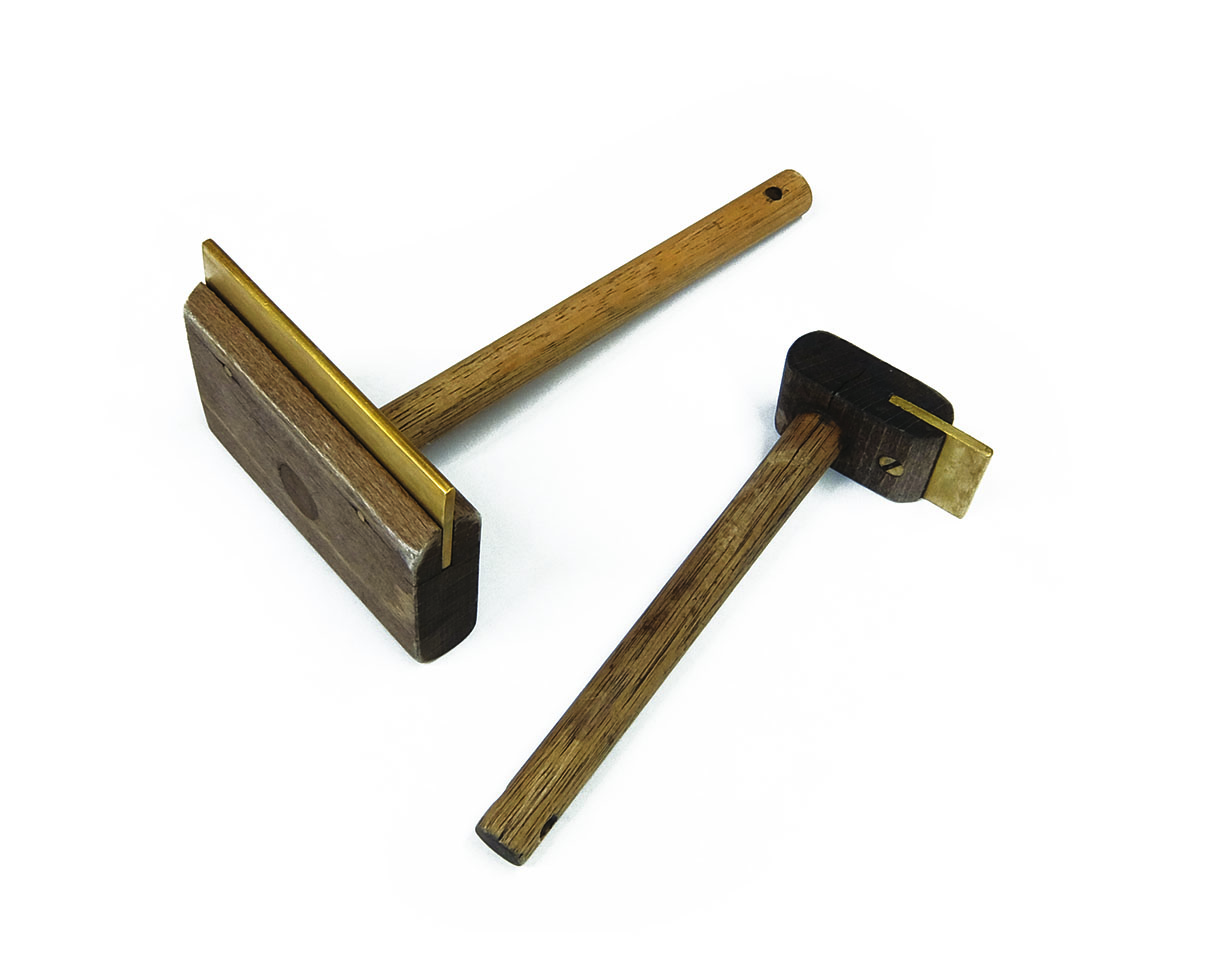 Setting up and preparation
Work out the size of the tables on a workshop rod. The sizes of the tops were established and the veneers prepared for the top and bottom – the counterbalance veneer. Flame veneers tend to resemble a mountain range and need to be flattened before veneering. They can be soaked with water and clamped between two pieces of board with even pressure or, as I was shown many years ago, a thin solution of wallpaper paste can be spread on both sides of the veneer and placed between sheets of newspaper to flatten as before. The newspaper was changed frequently to prevent the veneer sticking to the paper and aid drying. The paste will hold the veneer flat long enough for you to lay the veneer and makes no difference to staining and polishing. Both methods of veneering require counterbalance veneers on the bottom and all the veneers were cut using a straightedge and a veneer cutter. Splits were taped with veneer tape or gummed brown tape to prevent the splits increasing. I also taped over the centre section of the flame to prevent splitting as it dries. The flame veneer was cut for the large top first and then reduced for the next two pieces accordingly. The aim was to have the pattern on the small top the same as the central part of the large top as shown.

Hand veneering
Hand veneering requires the animal/hide glue to be heated in a glue pot, which should be hot but not to the point of boiling. A warm workshop is advisable and everything you need should be within reach i.e. hot iron, hot water and cloth and a veneer hammer – kept hot in the water. The flame veneer was cut 10mm larger all round and working quickly the glue was spread on the ground. With the veneer placed over the ground, the back face of the veneer was covered with glue and then turned over into position. There was a certain amount of glue on the veneer face, to which was added a small amount of hot water to make the hammer glide easily over the surface. To work out the excess glue the heated veneer hammer was worked from the centre to the outer edges and corners. Enough pressure was used to squeeze the glue out without breaking the veneer, with the aid of a zigzag action. When the glue started to solidify a warm iron was used on the surface to re-melt the glue and continue. I ran my fingers over the veneer surface to check for high spots, these indicated glue trapped below the veneer and these needed to be squeezed out, the area was again warmed with the iron and the process repeated until the surface was flat. The flame veneer was trimmed back to the required size with a knife and square and the curved corners cut out using a template. White lines were fitted to the corners using square sections of line – these are easier to bend than the flat lines. Four pieces were soaked in hot water and when flexible bent to the shape of the corner, heat from the tip of the iron helped this process but it will form to the shape as it cools and dries. When sufficiently shaped they were glued into position leaving the ends long and held with pins where required. The straight sections of line were mitred into the curved lines and glued in position. The veneer for the cross banding along the straight edges were cut, then glued and hammered into position. The joints between the flame, white line and cross-banding were taped and as it dries it will aid keeping the joints tight. Moving onto the curved corners the two pieces of veneer were glued into position and the mitre cut through both pieces of veneer at the same time to create a tight joint. Removing the top waste piece first, I carefully lifted the top corner piece to remove the waste from the lower corner piece. Both pieces were hammered down squeezing out excess glue and the joint taped as before. The counterbalance veneer was laid in the same way as the flame veneer. 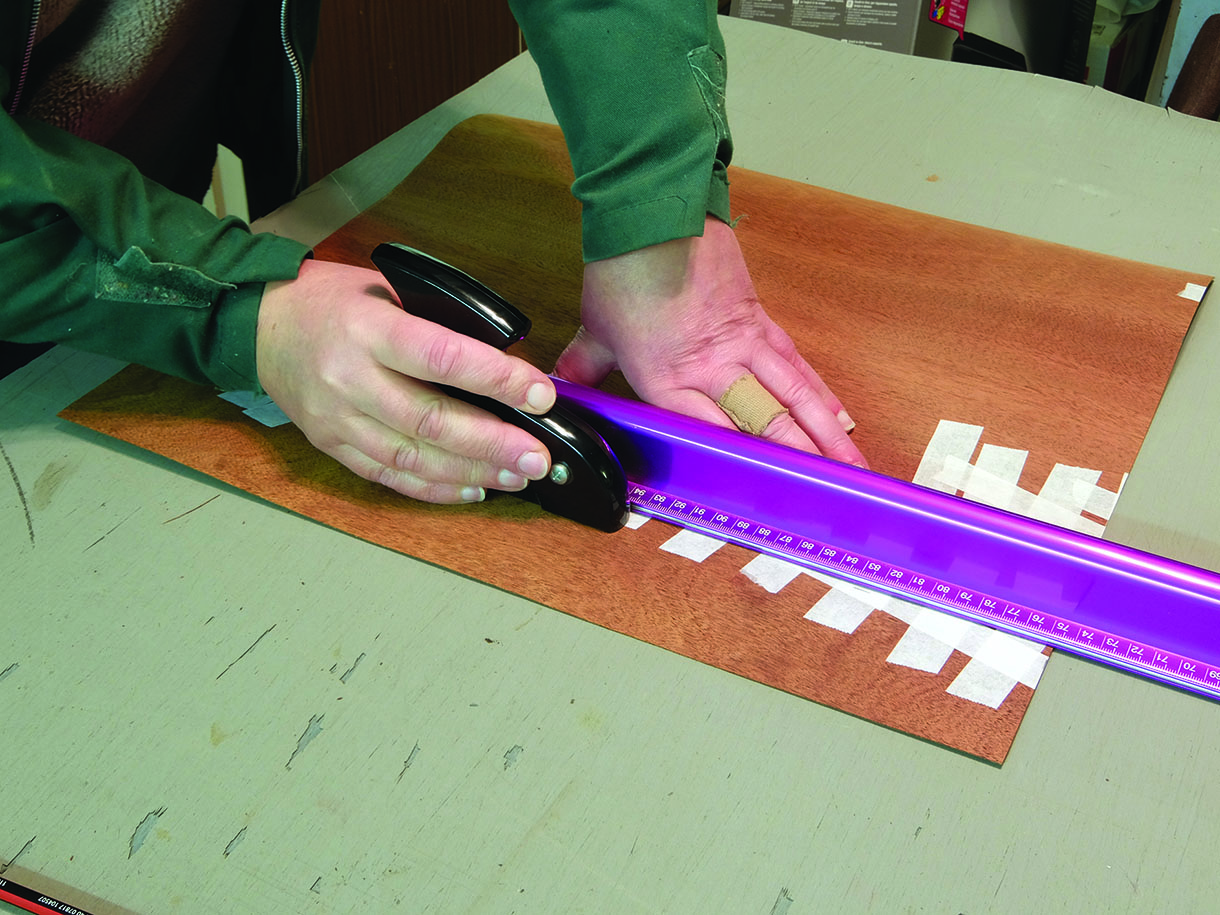 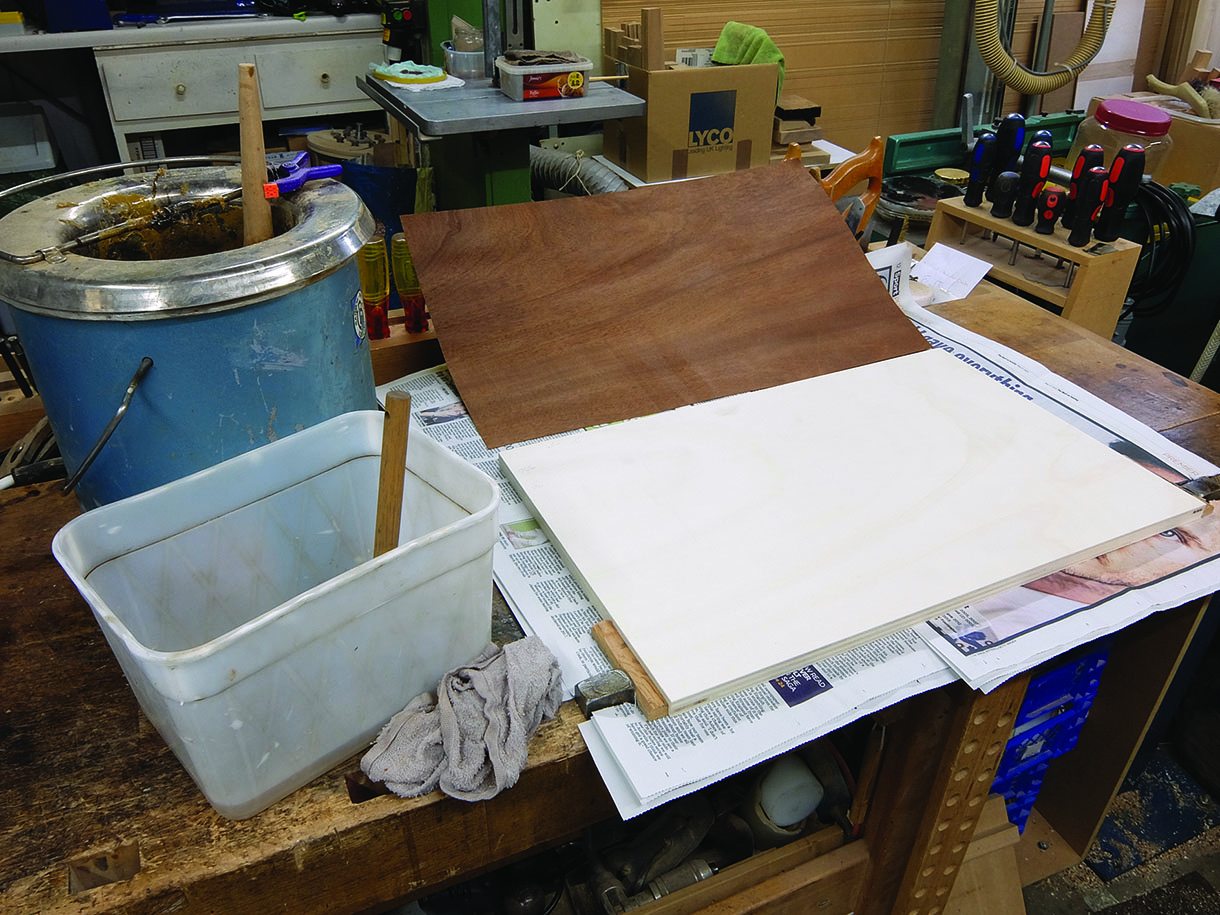 Veneering a top with everything in reach 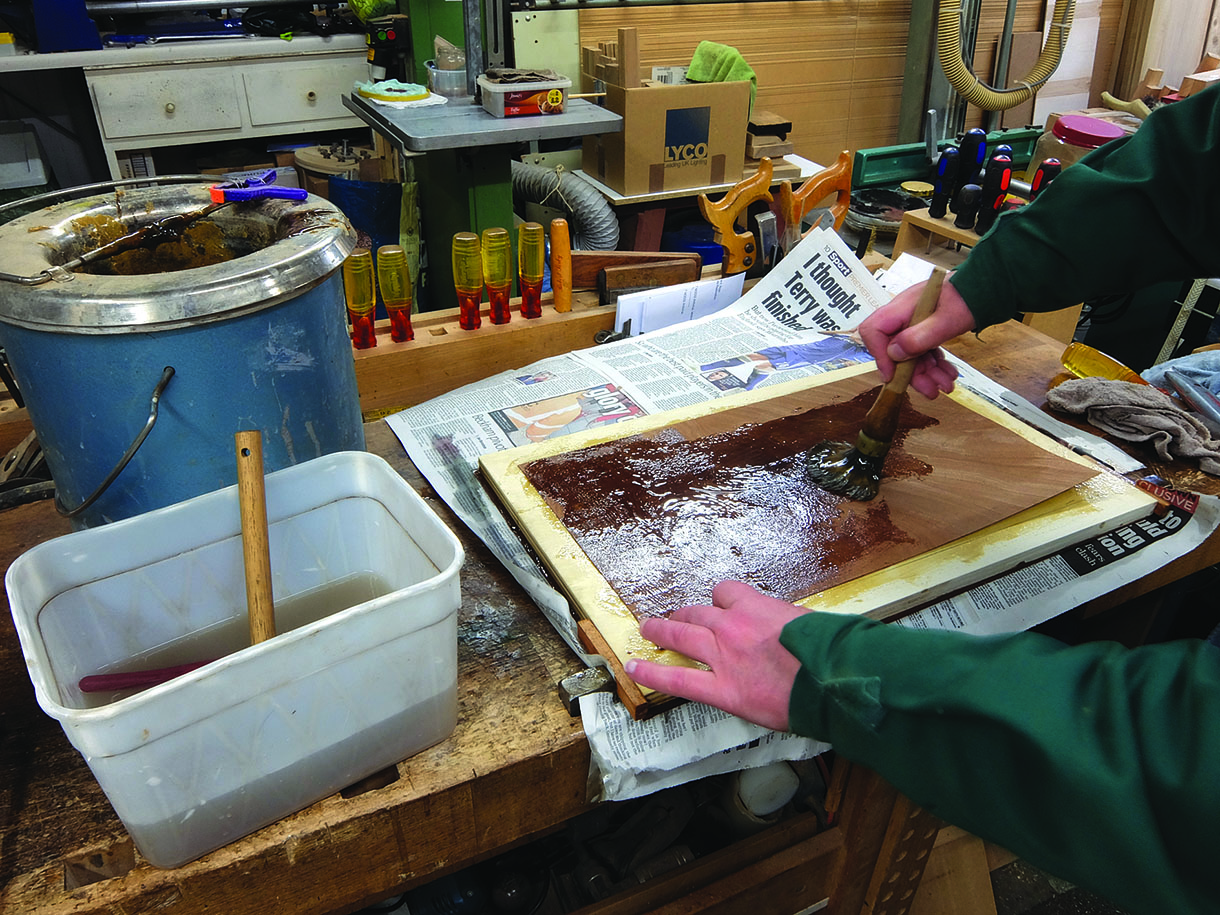 Gluing the back side of the veneer before turning over 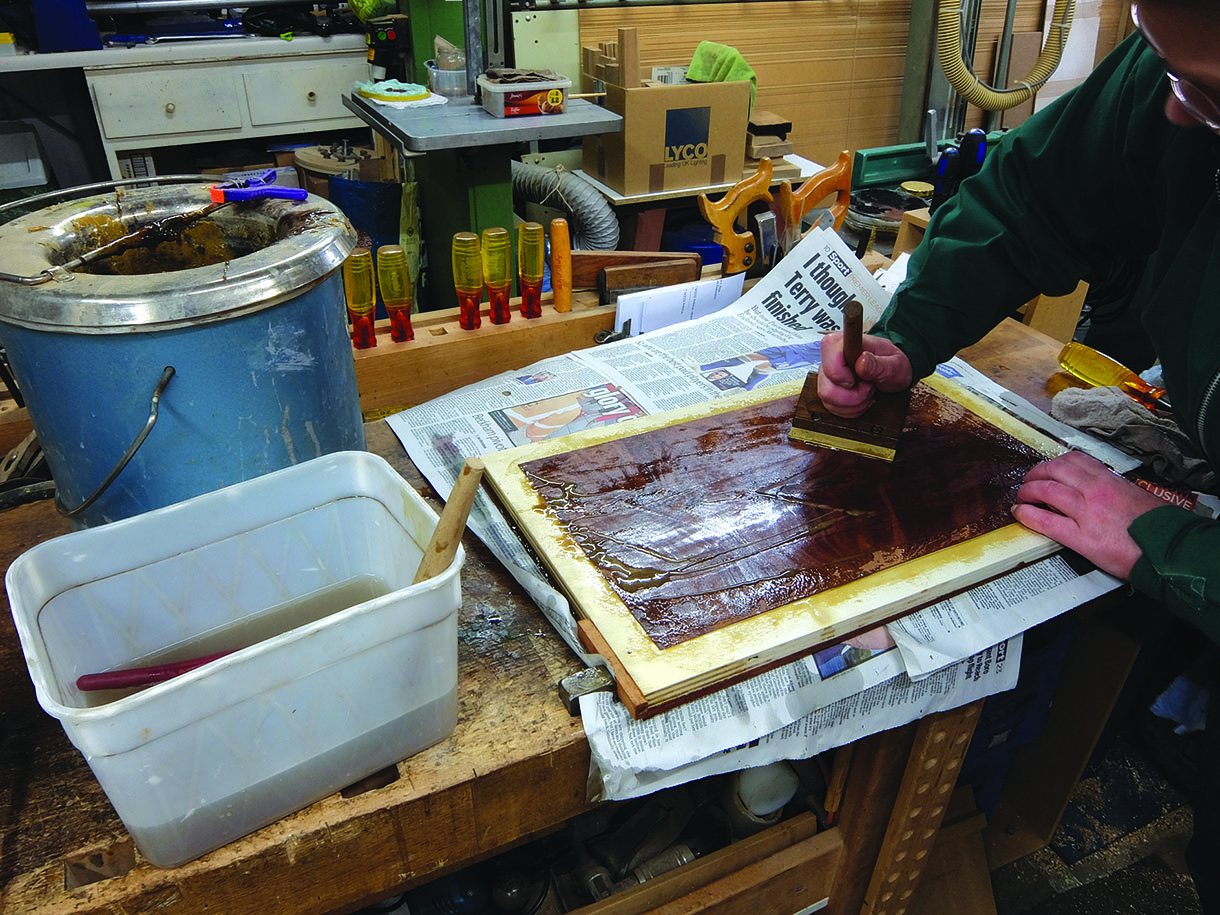 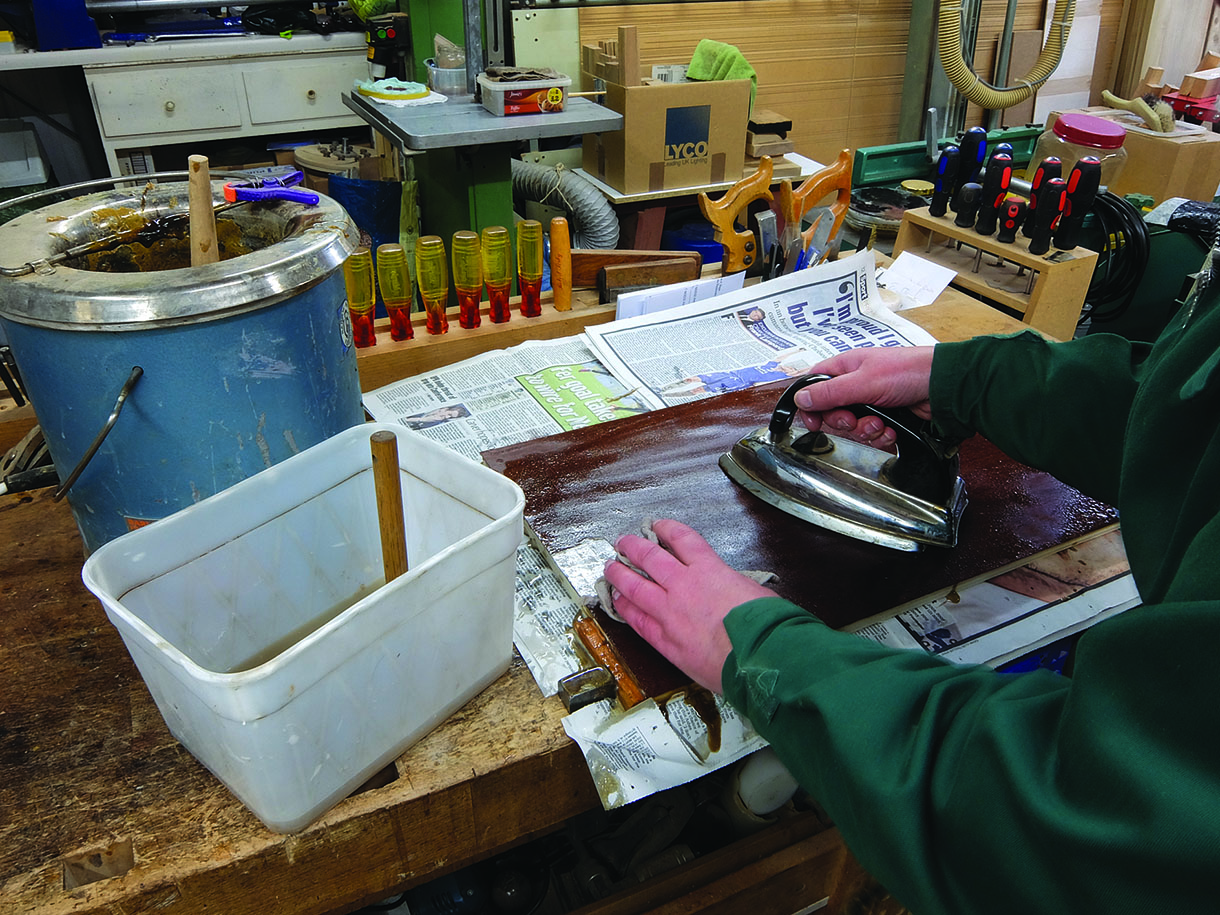 Warming areas as necessary with an iron 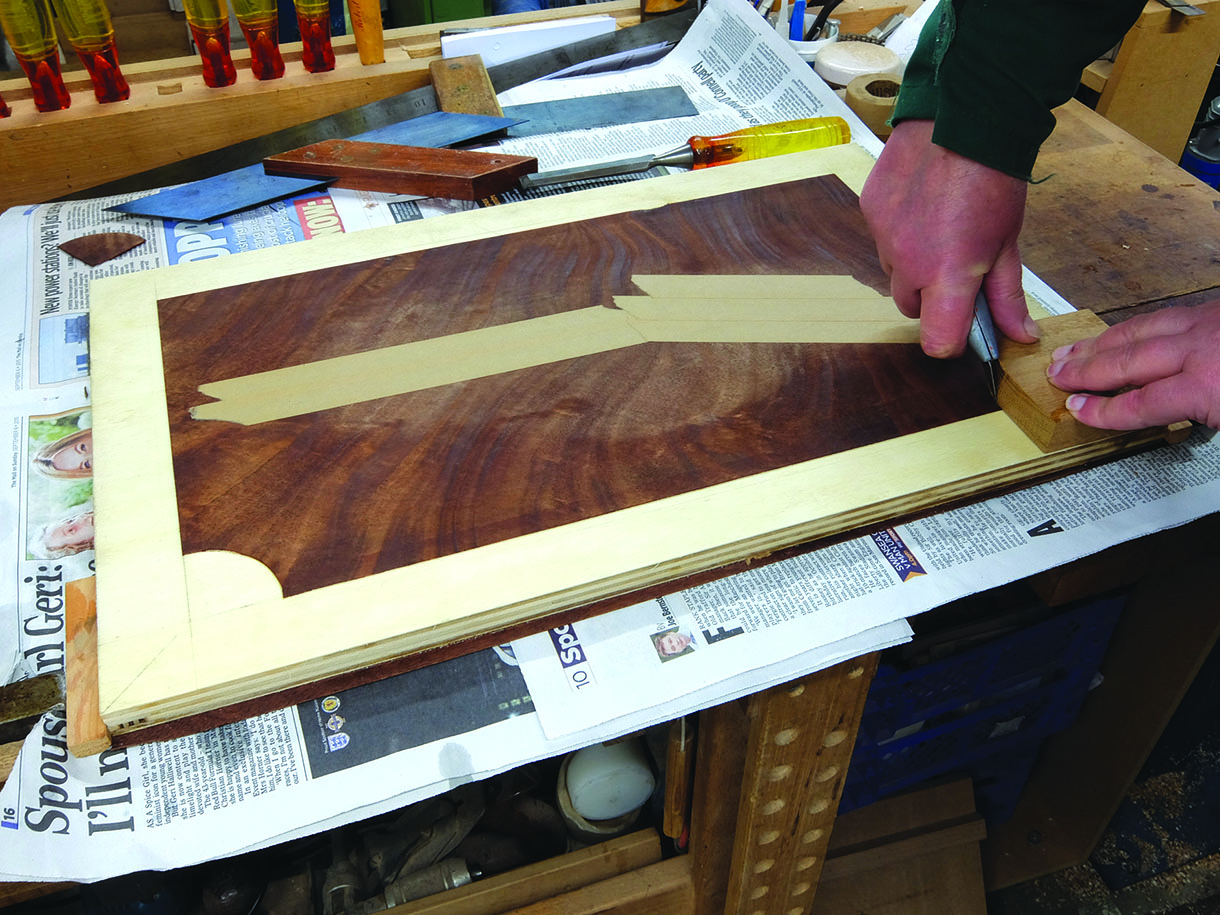 Trimming the corners to a template 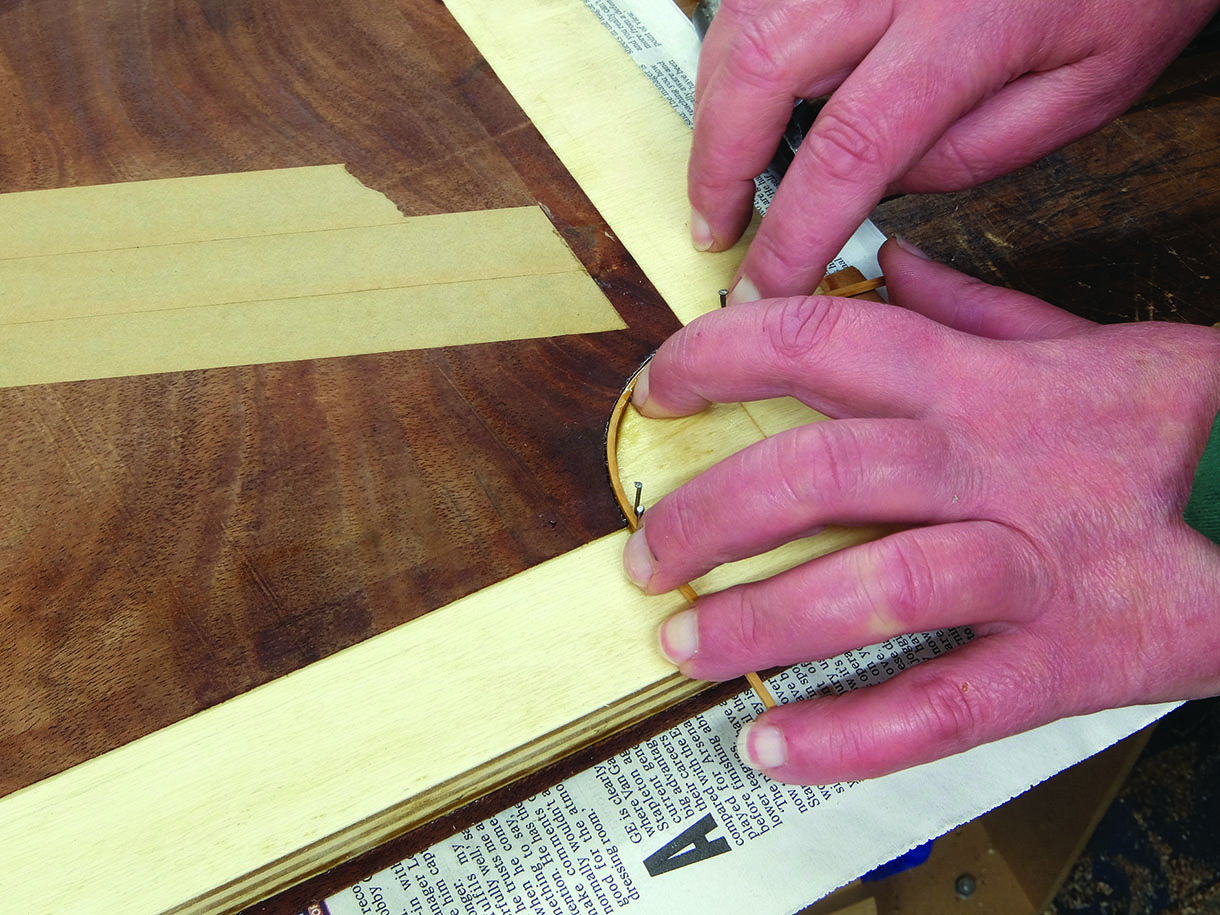 Square white line being shaped to the corner 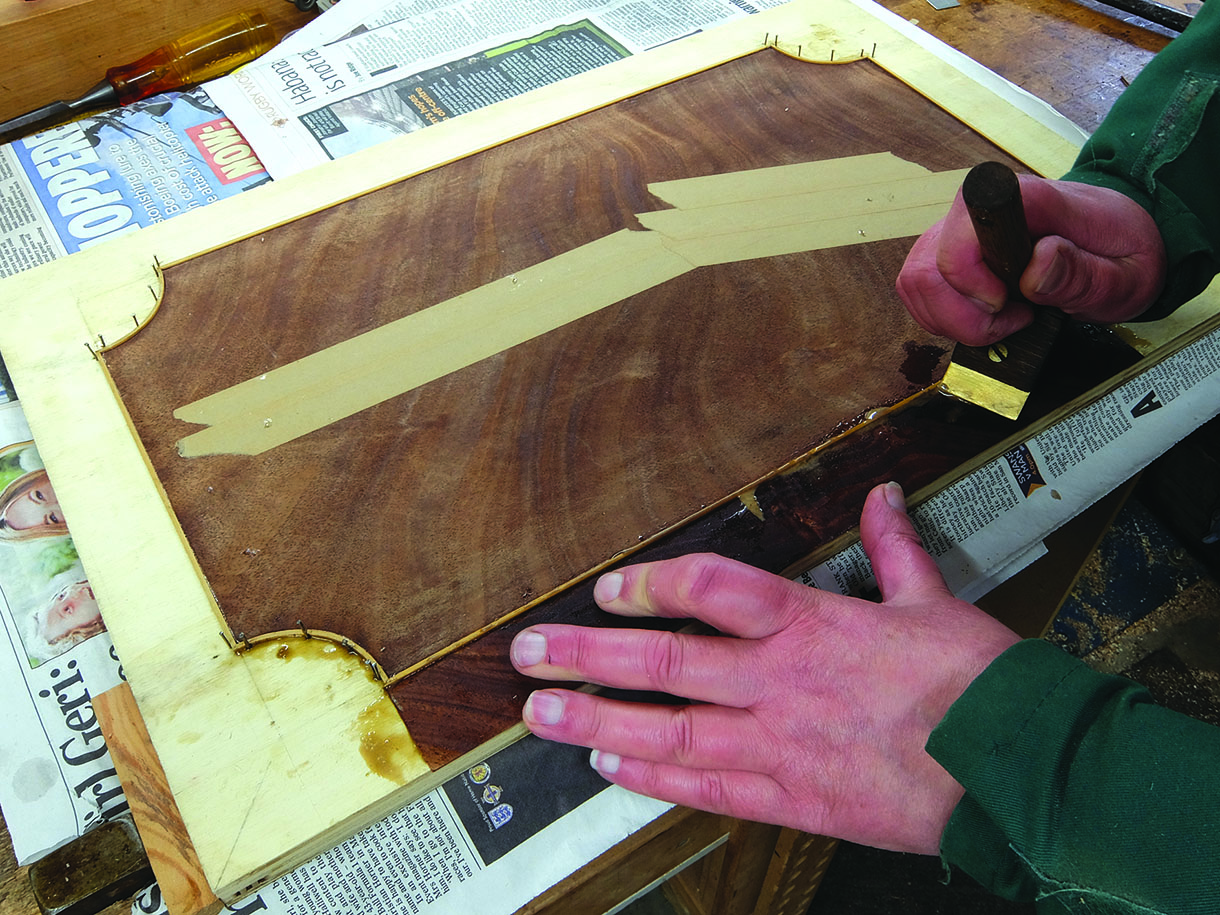 Veneering the cross-banding into place 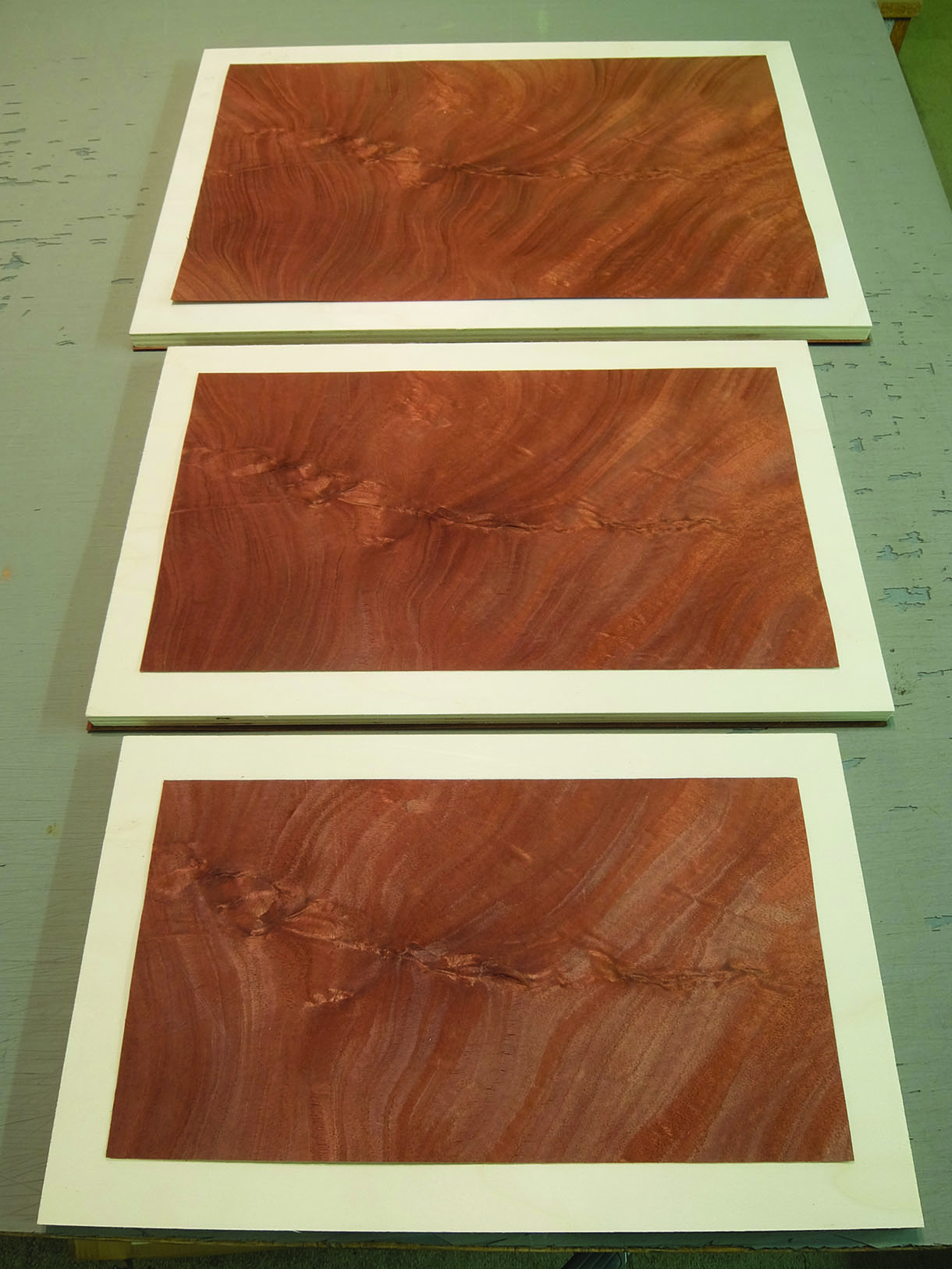 The flame veneers, reducing in size, to keep the pattern central 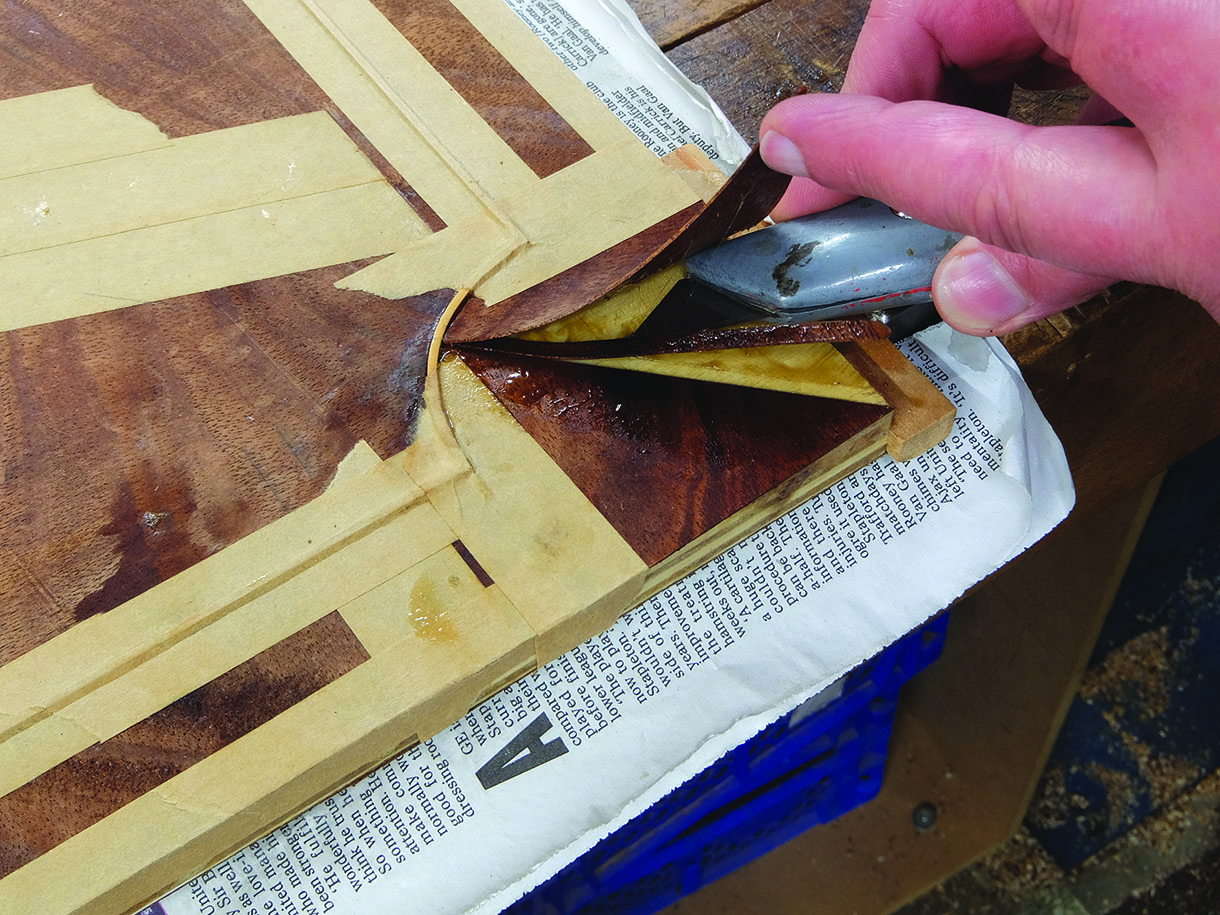 Lifting the top corner piece to remove the waste piece below 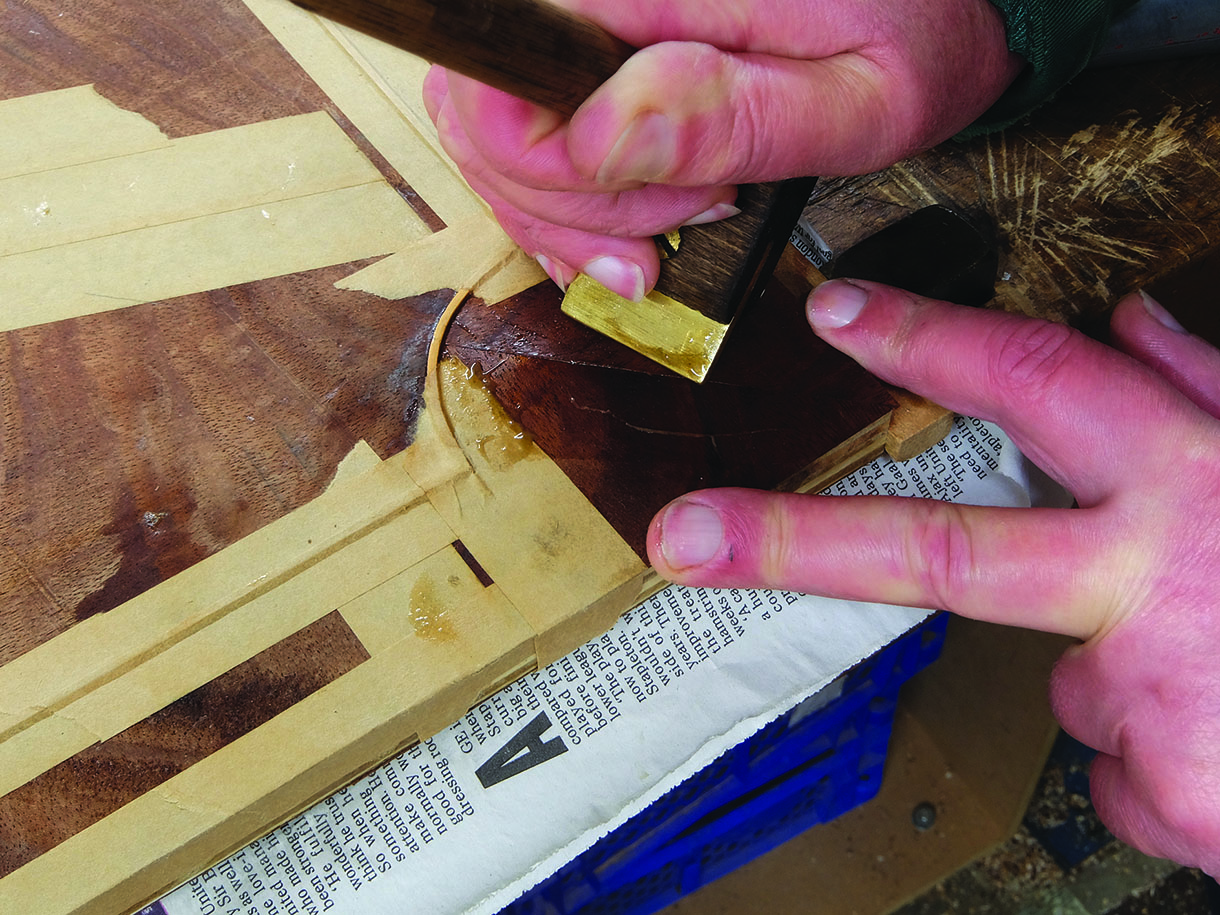 Squeezing the glue out through the joint

Veneering with a vacuum press
When using a vacuum press there are two ways to go about veneering the tops. The first is to lay the oversize central flame veneer, using a cold press glue specific for veneering – this has a longer working time and minimises bleed-through – then trim back and build up the white line and edging in a similar way to the hand veneering. Use the same glue or if you prefer a contact adhesive. This way allows you to tweak the mitres so that the corner points line up. Alternatively, you can build the whole pattern and lay the veneers in one action. This way requires accurate marking and cutting and when the top is glued and pressed, the positioning of the veneer must be accurate or the corner points may not line up. The pattern is built up in the same way as with the hand veneering but this time the veneers are taped together on the face side of the veneers instead of being glued. The central flame was cut to the correct size and a template or object to the required radius was used to cut out the corners. Preformed corners, made from flat lines, were fitted and taped into each corner leaving the ends long again. The remaining straight flat line sections were fitted before cutting the cross-banding along the straight edges.
Before you mitre the corner pieces you need to establish the mitre line. The centre point was measured between the points of the curves and with a rule and square a line was marked on the back side of the veneer. The corner pieces were shaped and taped in position. Mitre joints were cut through both pieces at the same time to form a tight joint as with the hand veneering. On completion the assembled pattern, when viewed from the back, looked as shown in the photo. For both cases, the bag press was set up on a flat surface and the breather strips placed around the inside of the bag, leaving room for the panel in the centre. The breather strips overlap and pass under the hose connector, to aid the press in extracting the air from the bag. In either case, the cold press veneer glue was spread using a small roller for even coverage, the veneers were laid in position on the ground and taped at two points to prevent movement. The boards were placed within the bag and the vacuum press turned on. Counterbalance as before. 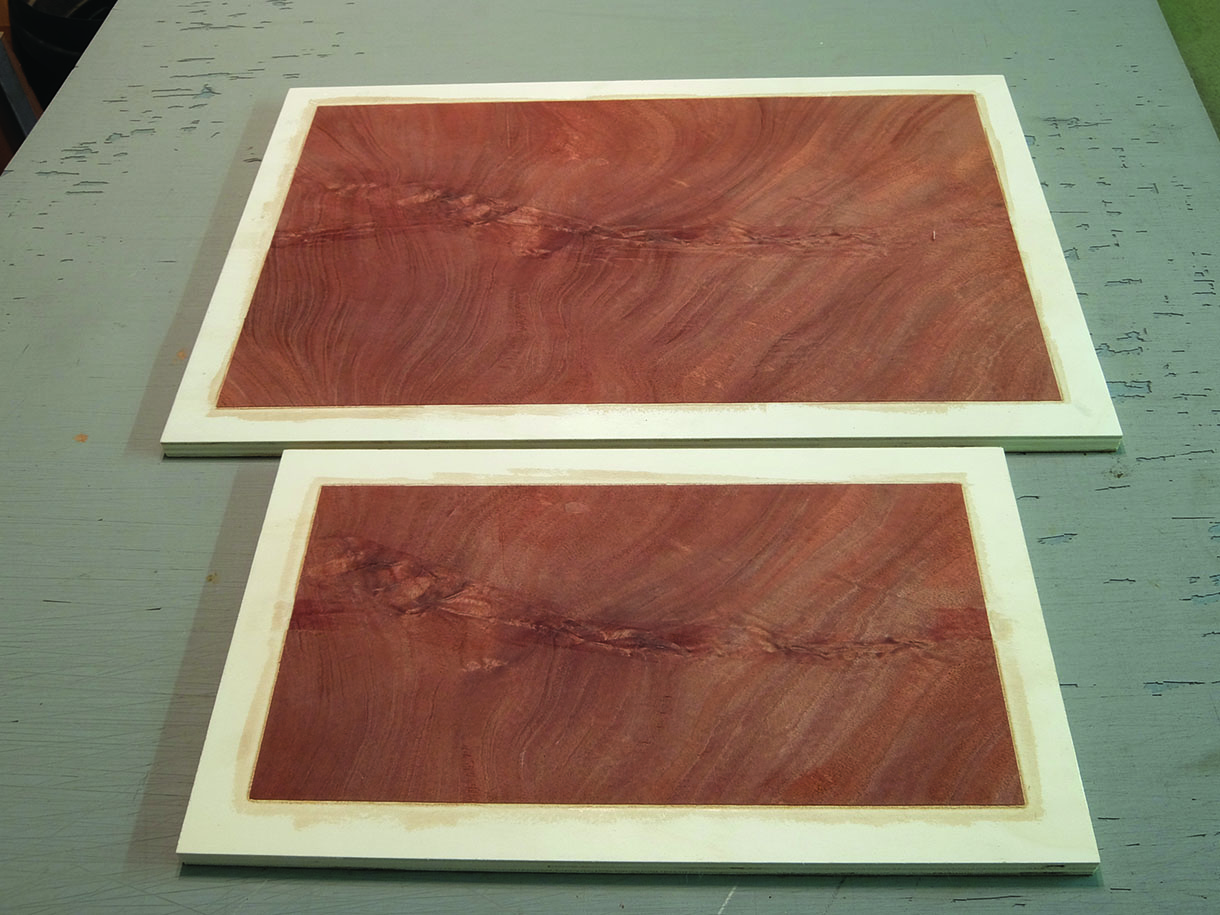 The flame veneer, oversize and pressed into place ready for the edging 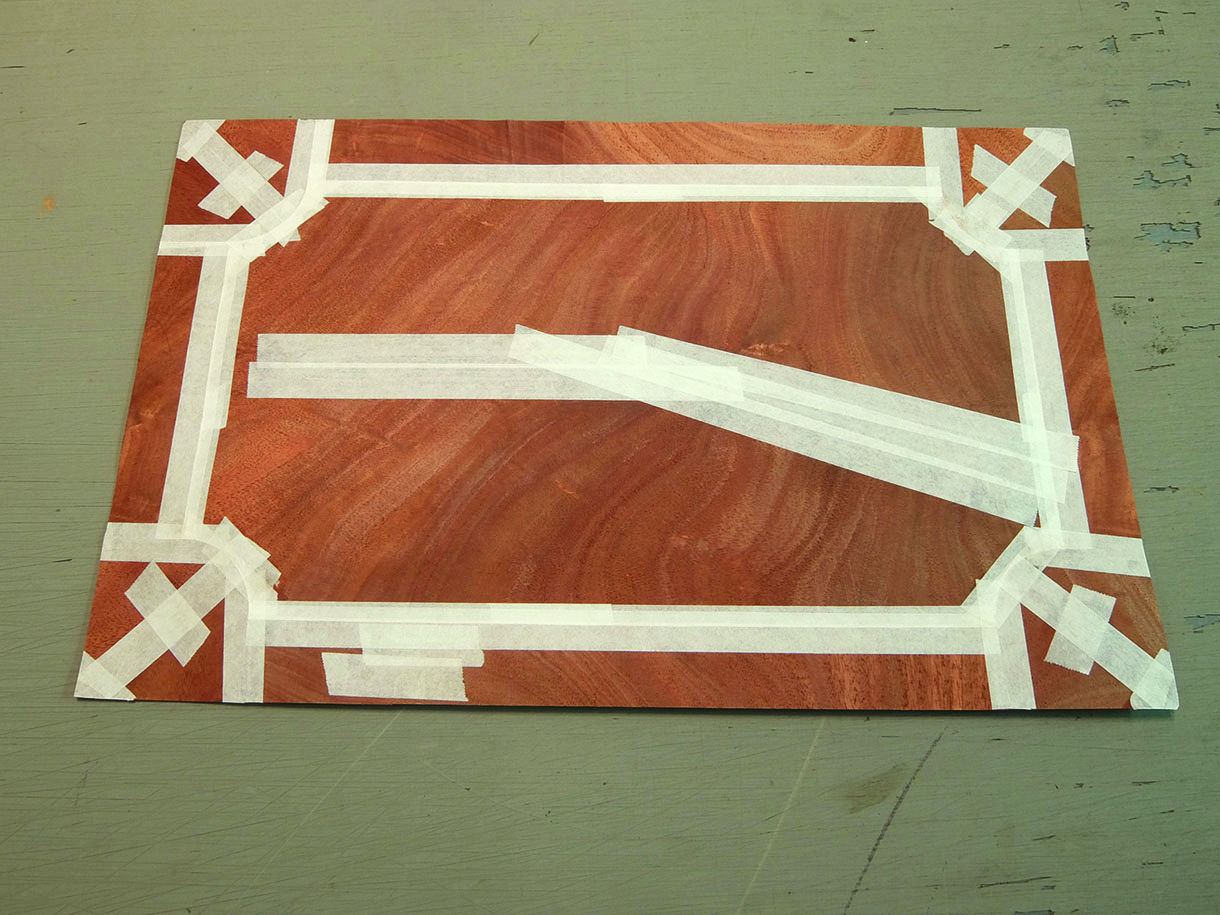 The complete built up pattern taped on the face side 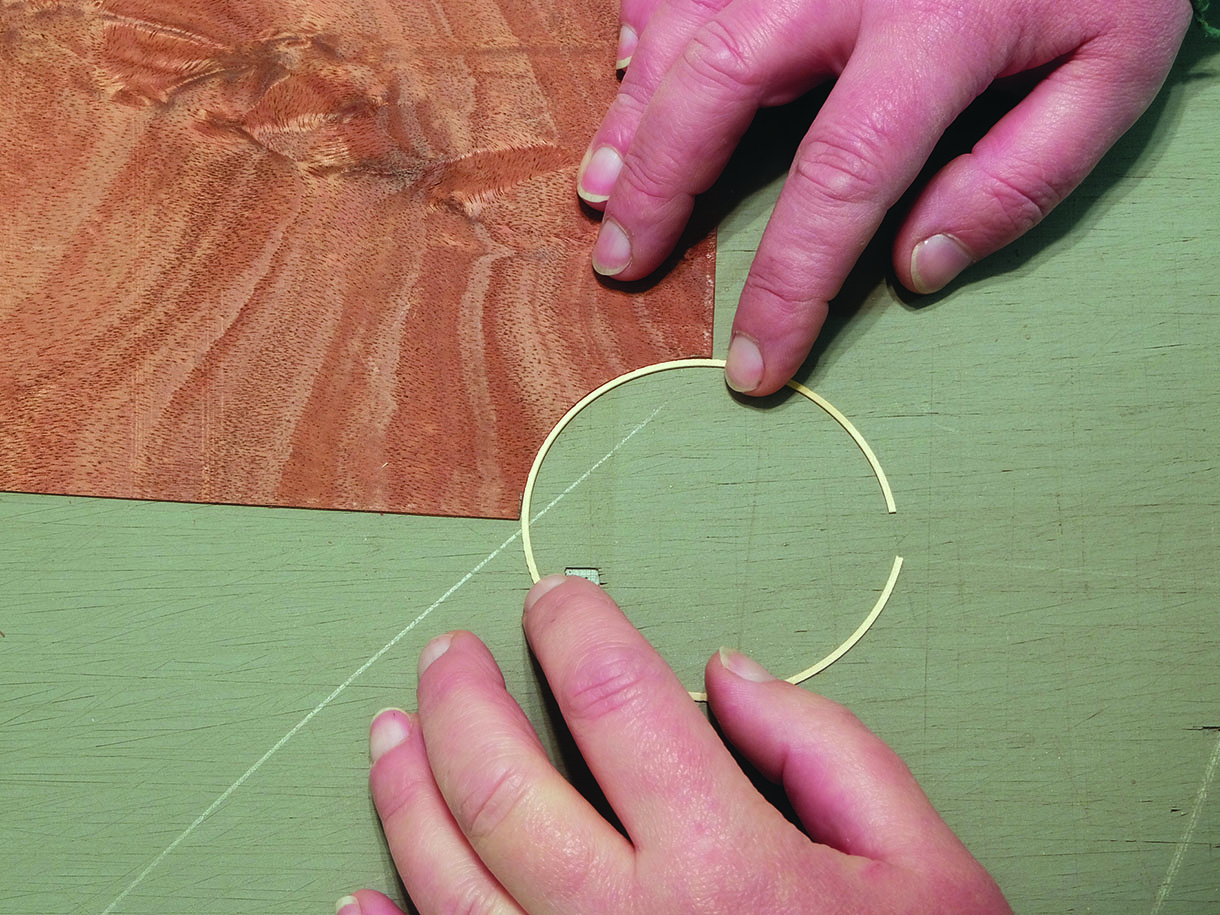 Fitting a preformed corner line to the corner 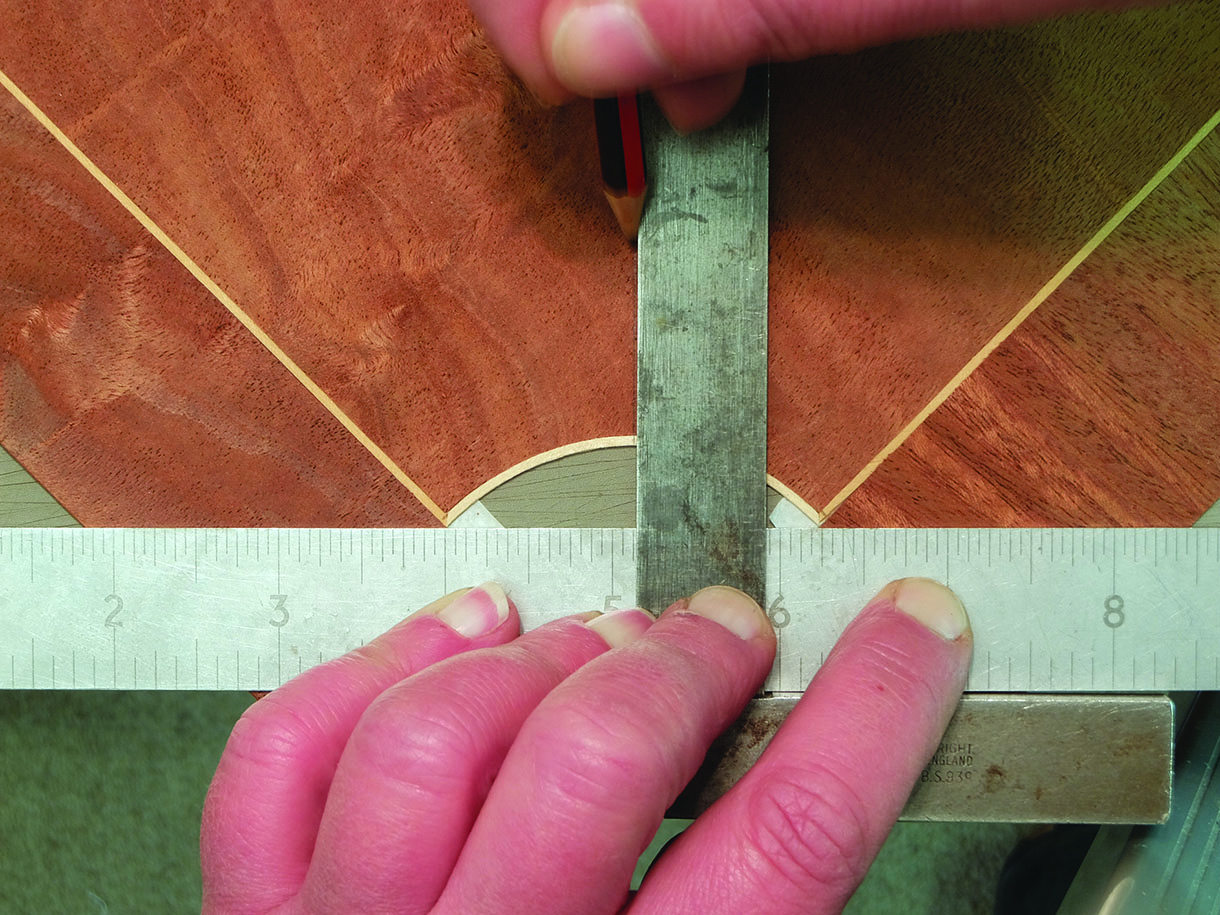 Finding and marking the line of the mitre 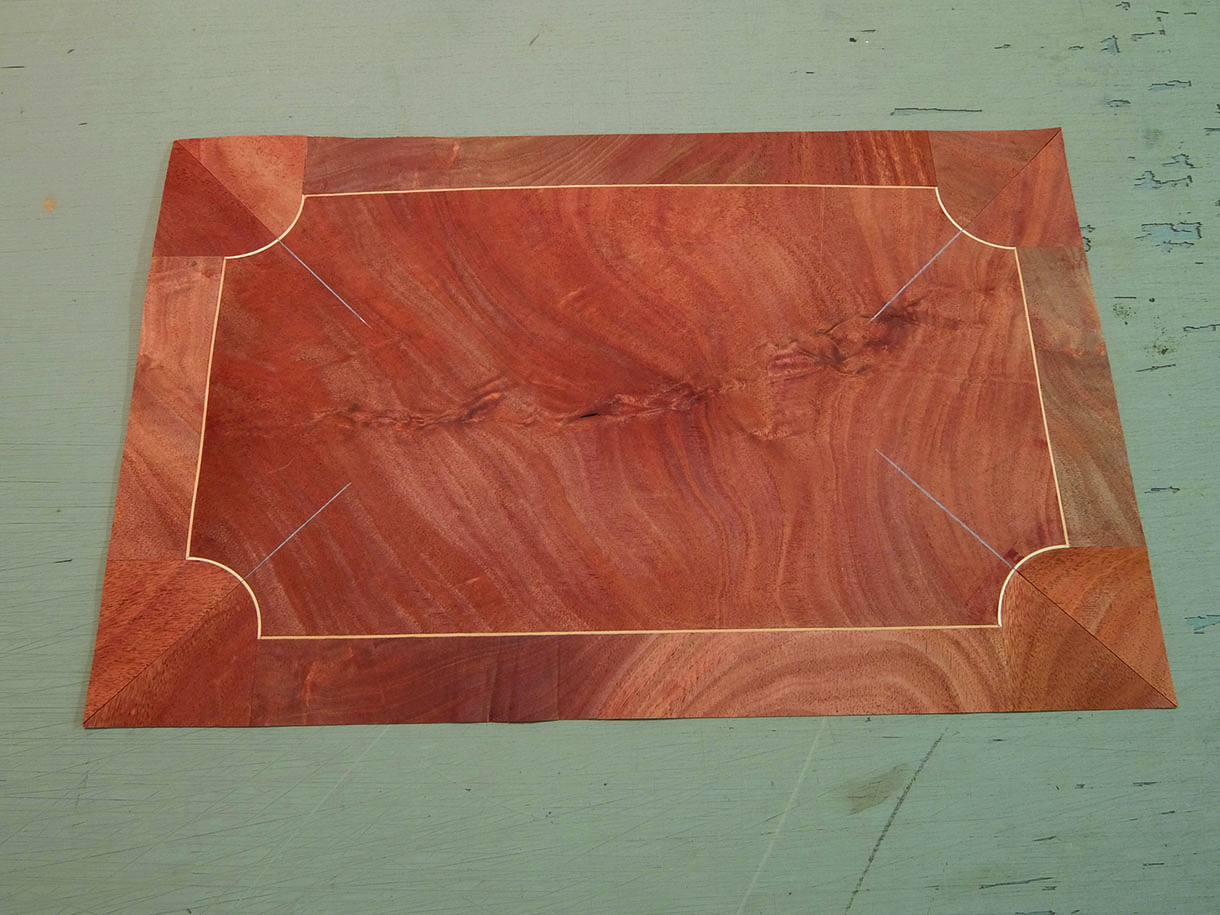 The completed pattern from the back 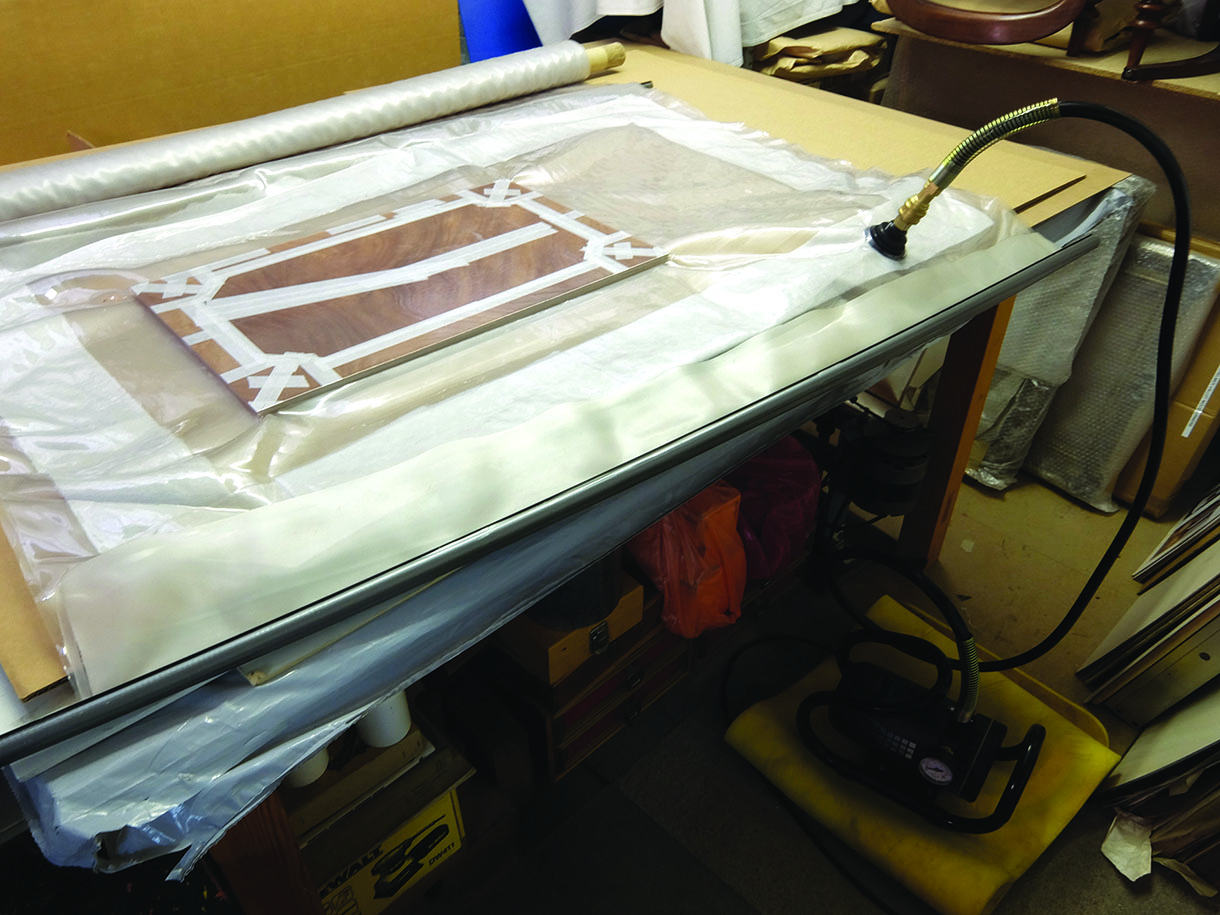 The panel placed in the vacuum bag press 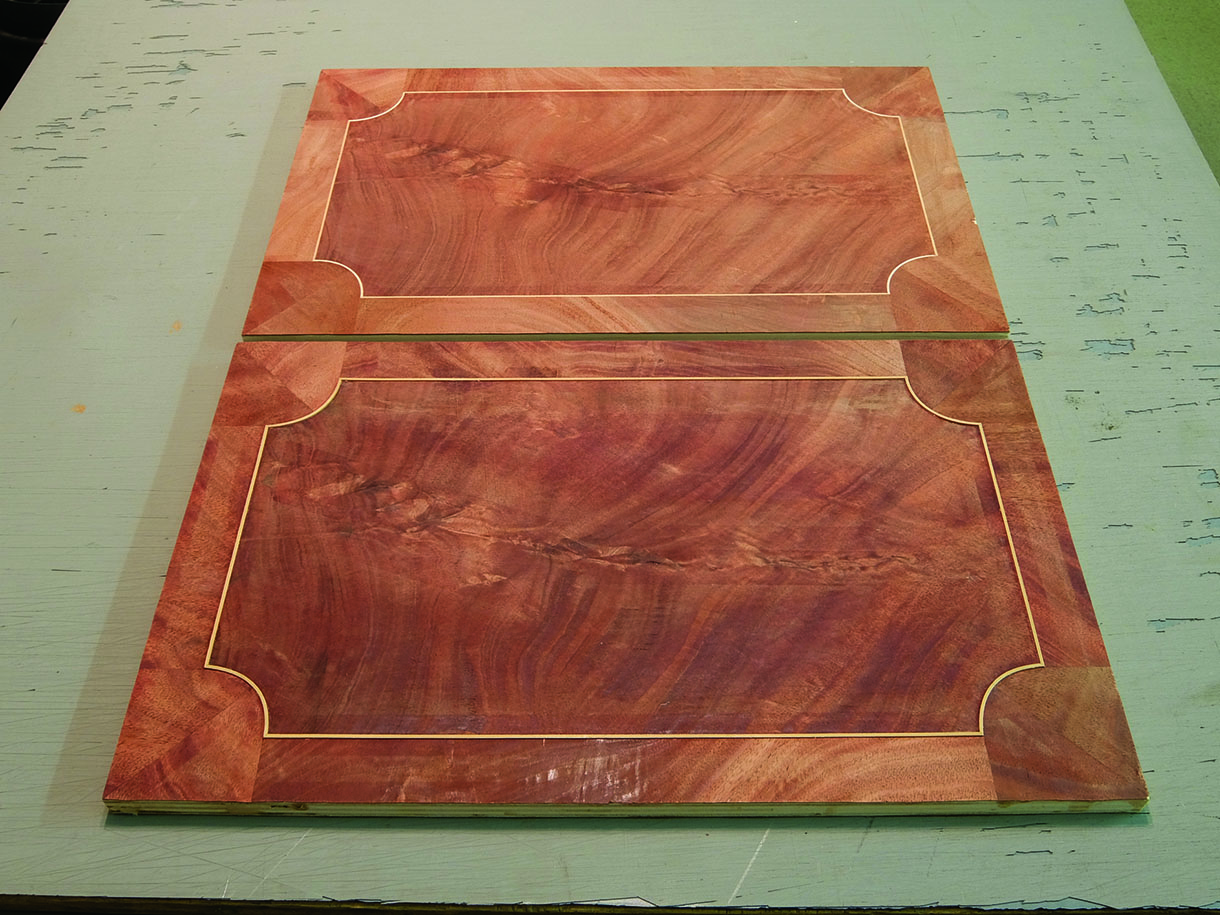 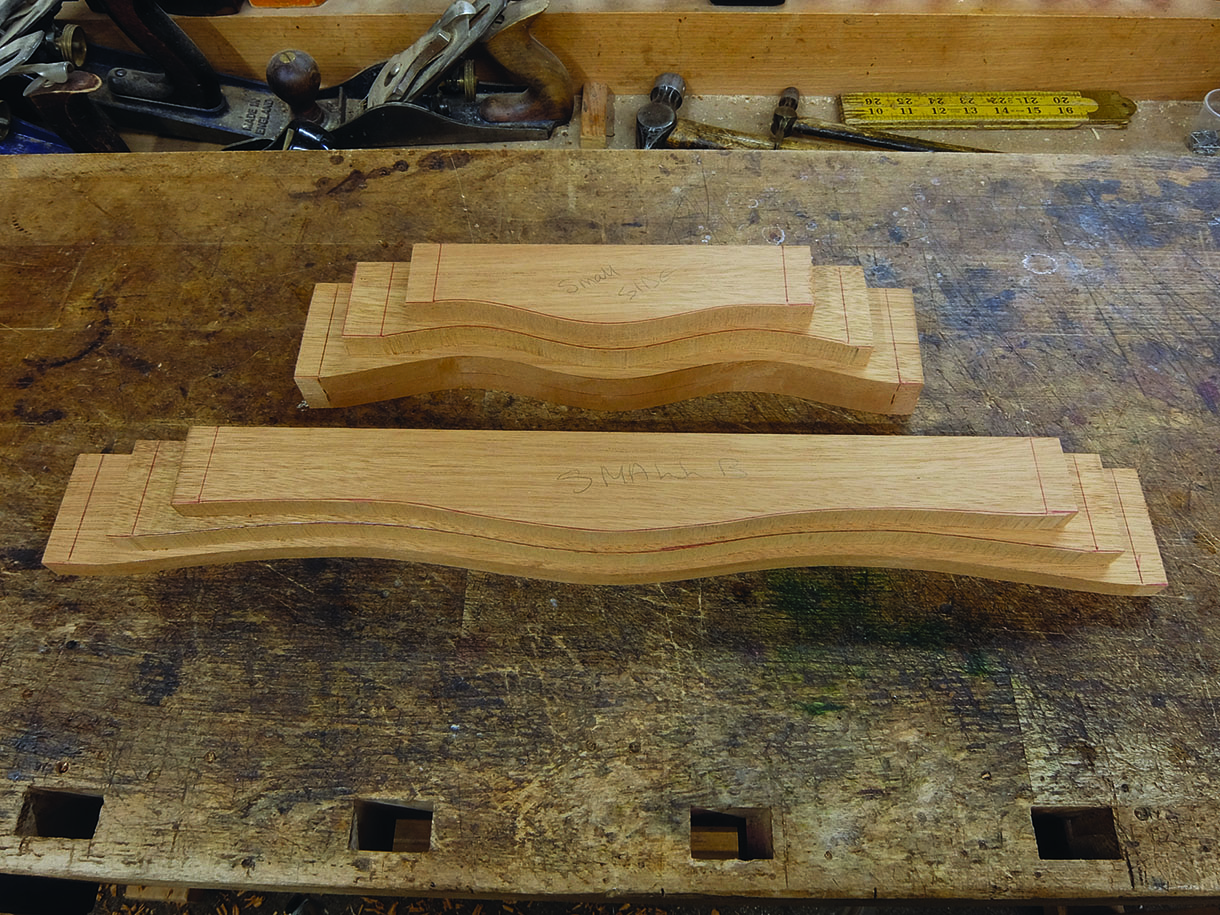 Side and back rails graduating in length and width 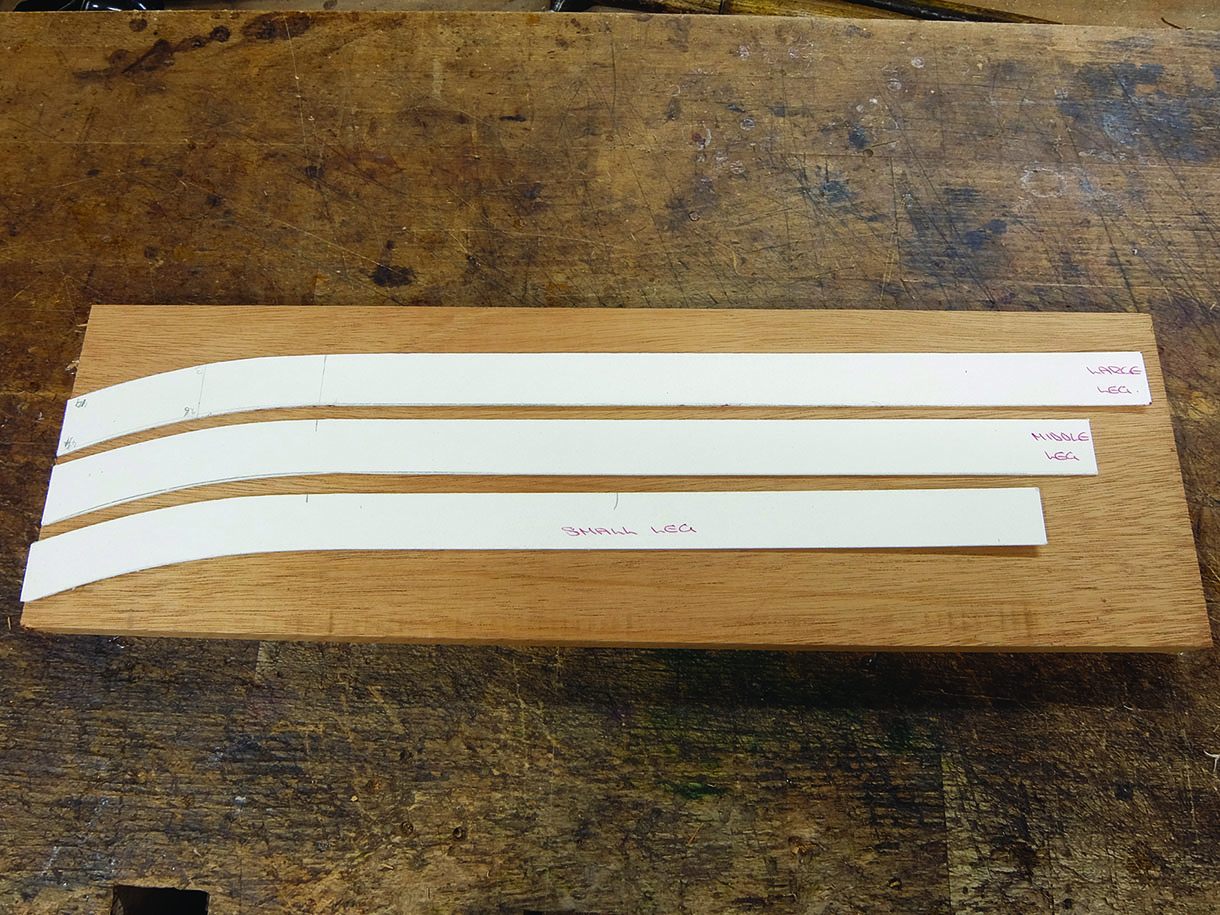 The leg templates reducing in size 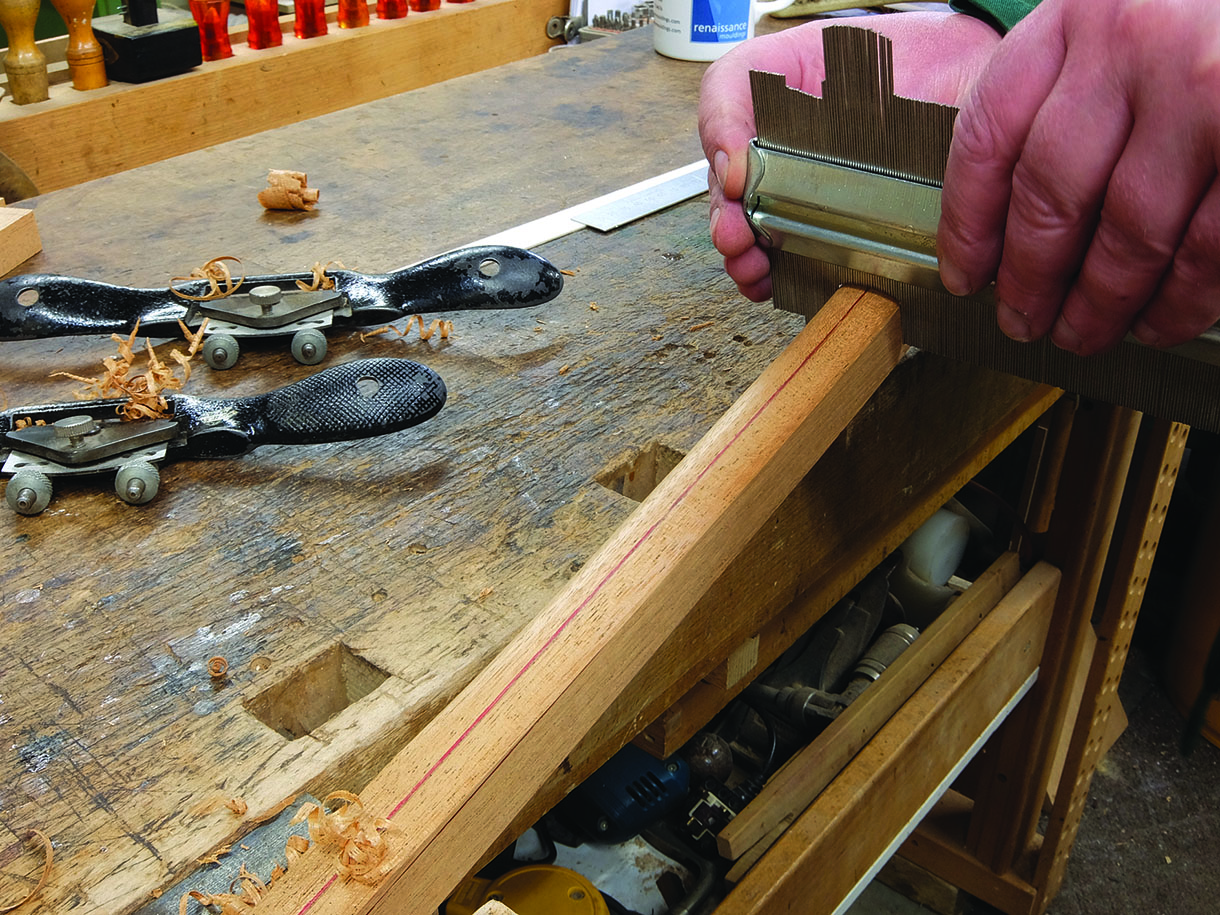 Shaping the curve to the profile gauge

Vacuum bag press
If you intend to do a large amount of veneering these are an ideal way to obtain the consistent pressure required to lay veneers on boards or indeed shaped formers and can be stored away when not in use. 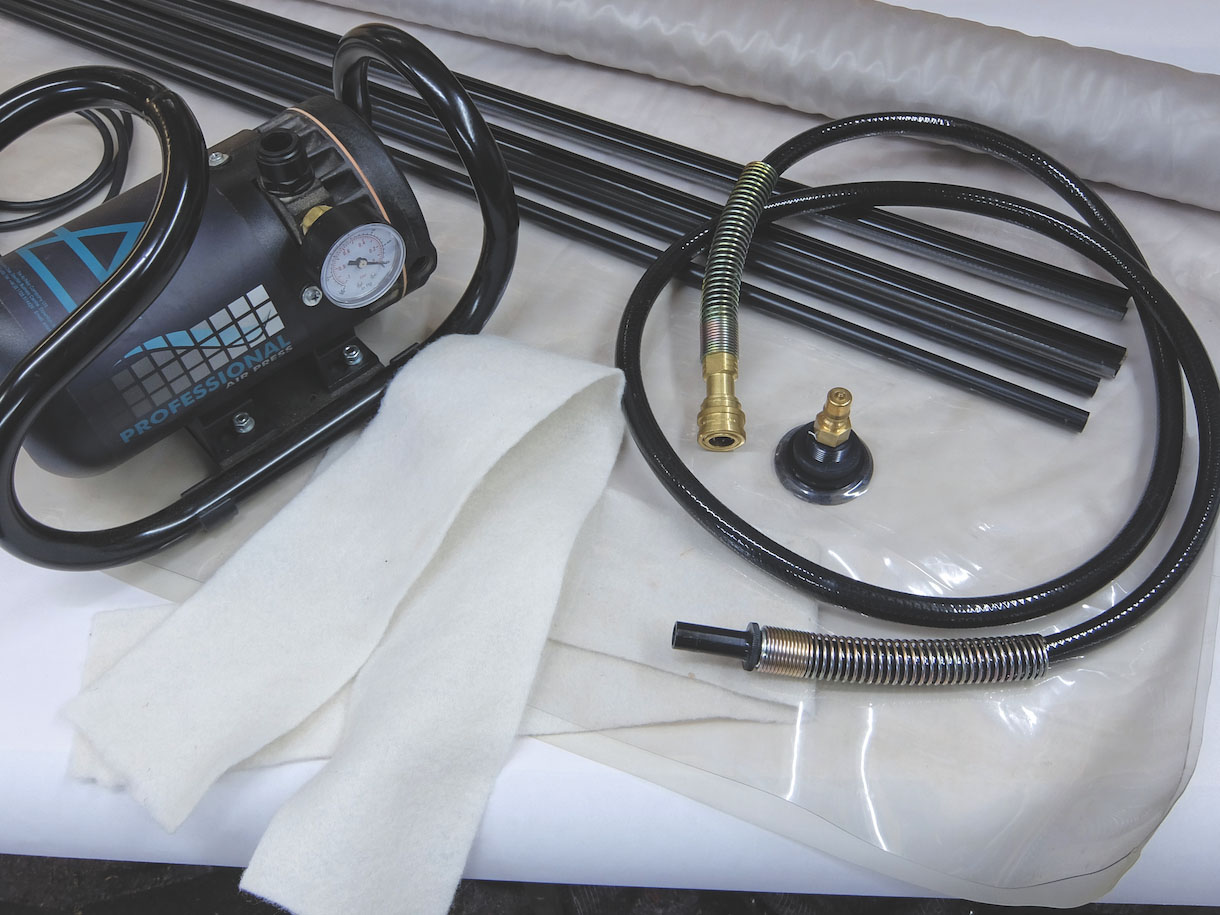 Making the table frames
Timber was prepared to the required dimensions. The shape of the rails for the three frames followed the same curves but graduated in length and width which was reduced from the top straight edge. A bandsaw was used to cut the shaped rails and the shape finalised using flat and round bottomed spokeshaves. The side rails were trued up in pairs, checking the shapes against the templates. The legs followed the same shape but the height was reduced from the top straight section in each case. Straight sections were used for the stretchers curving the top edge to match the curve on the front edge of the legs, shaped using flat and round bottomed spokeshaves, a profile gauge was used to get the same curve along each section. I cut mortise and tenons to join the rails and legs. Gluing the end frames first and then the two frames with the back rails using sash cramps. All sections of the frames were finished with cabinet scrapers and abrasives and the tops cleaned up in the same way. A beading was formed, then mitred and fitted around the edges of the tops to create a 4mm upstand allowing for toughened glass tops to fit within. The original nest of tables was stained and French polished to match the existing furniture but alternative finishes can be used. 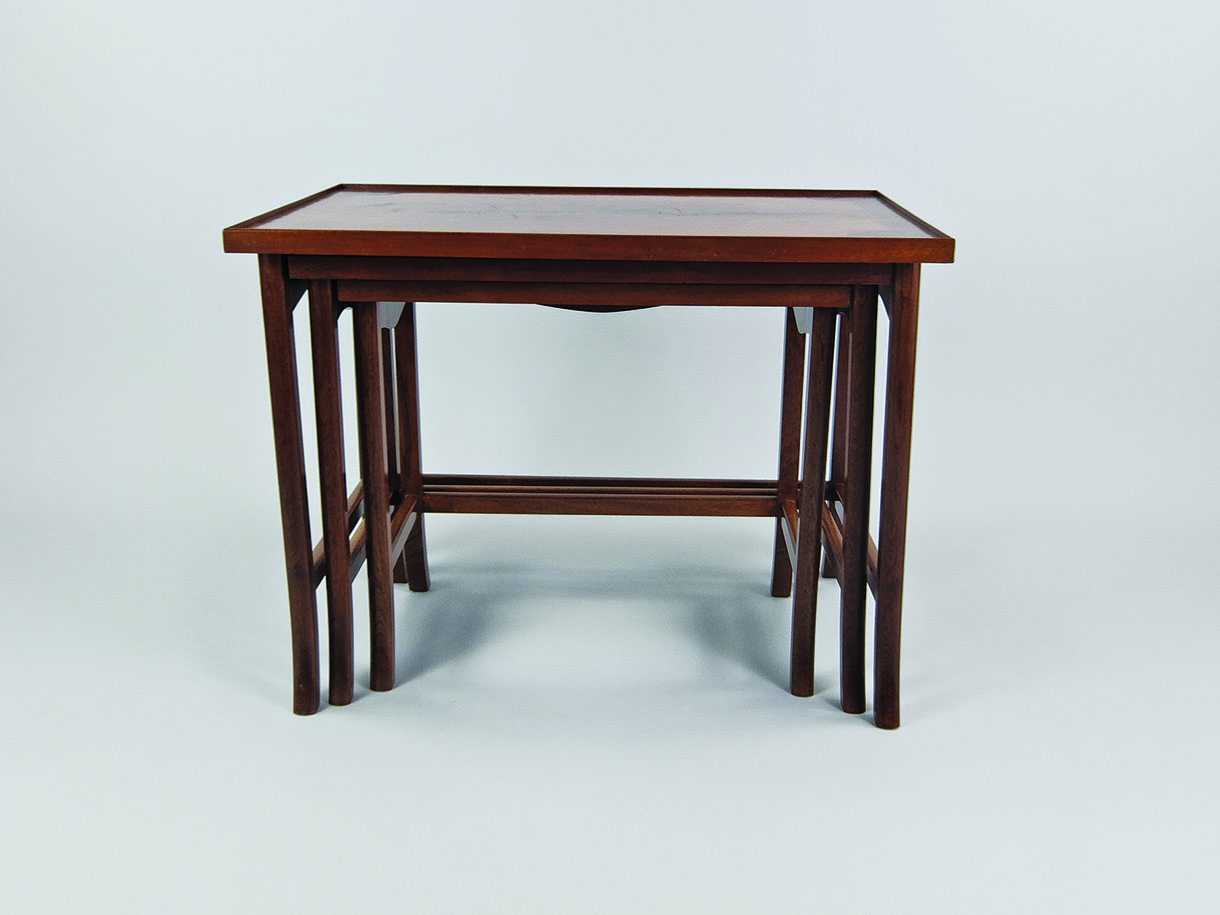 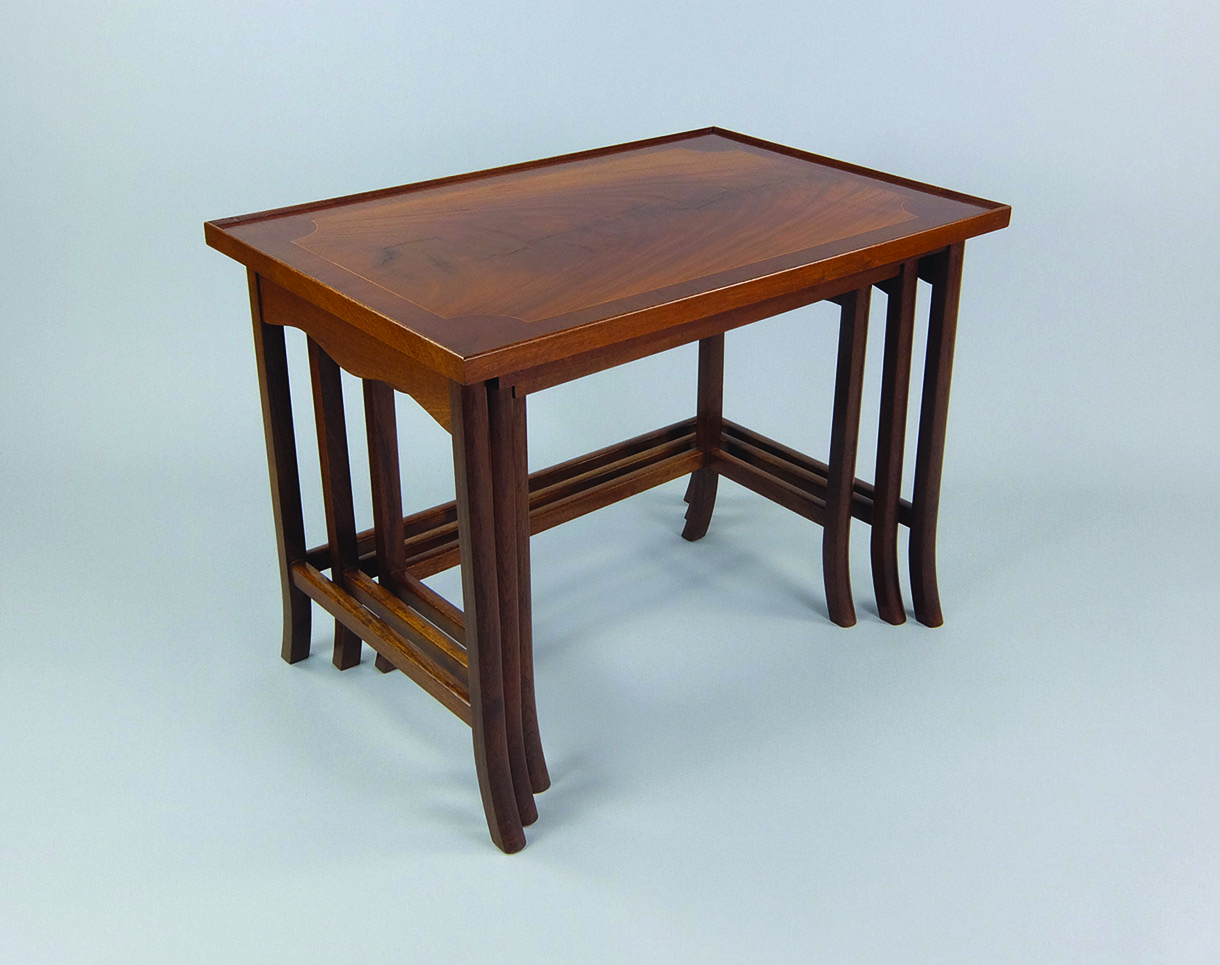 The completed nest of tables