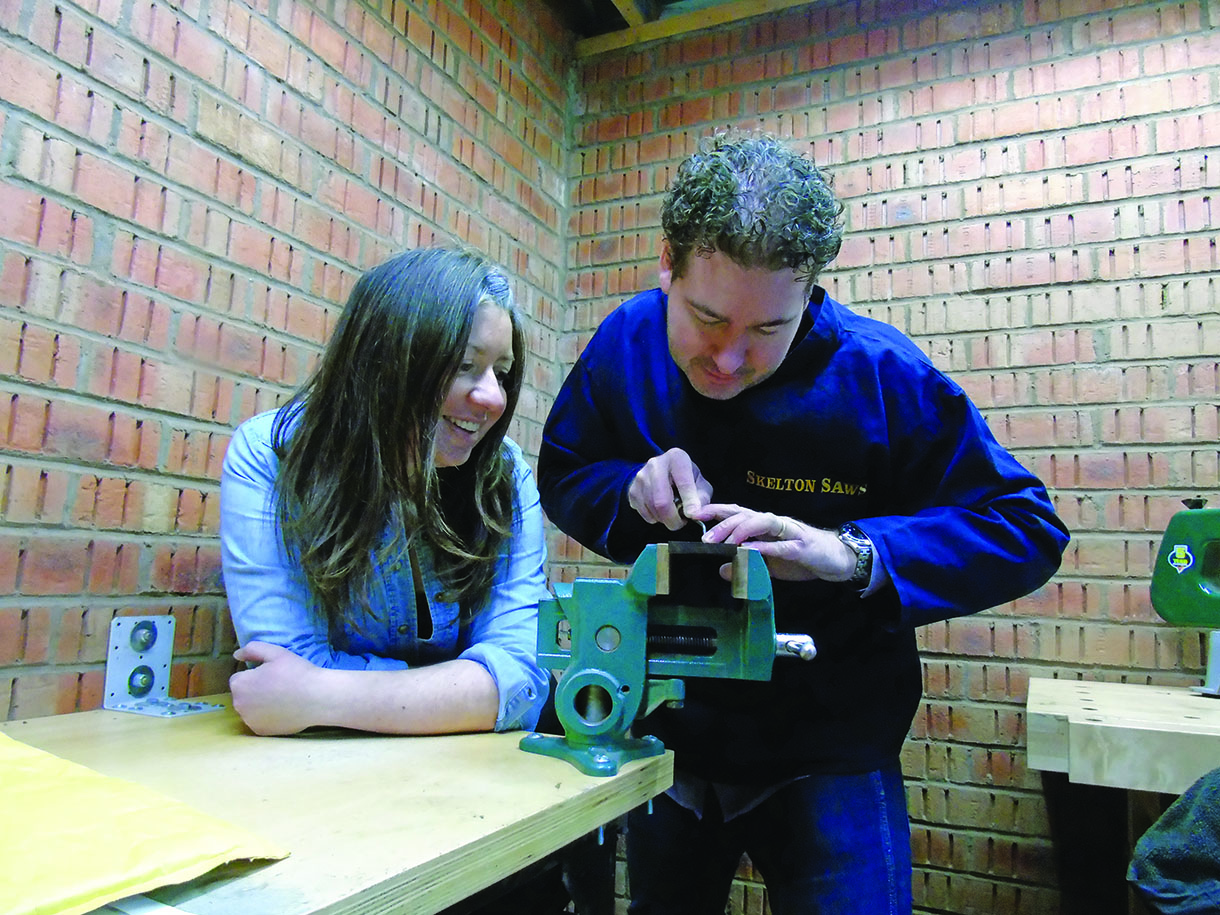 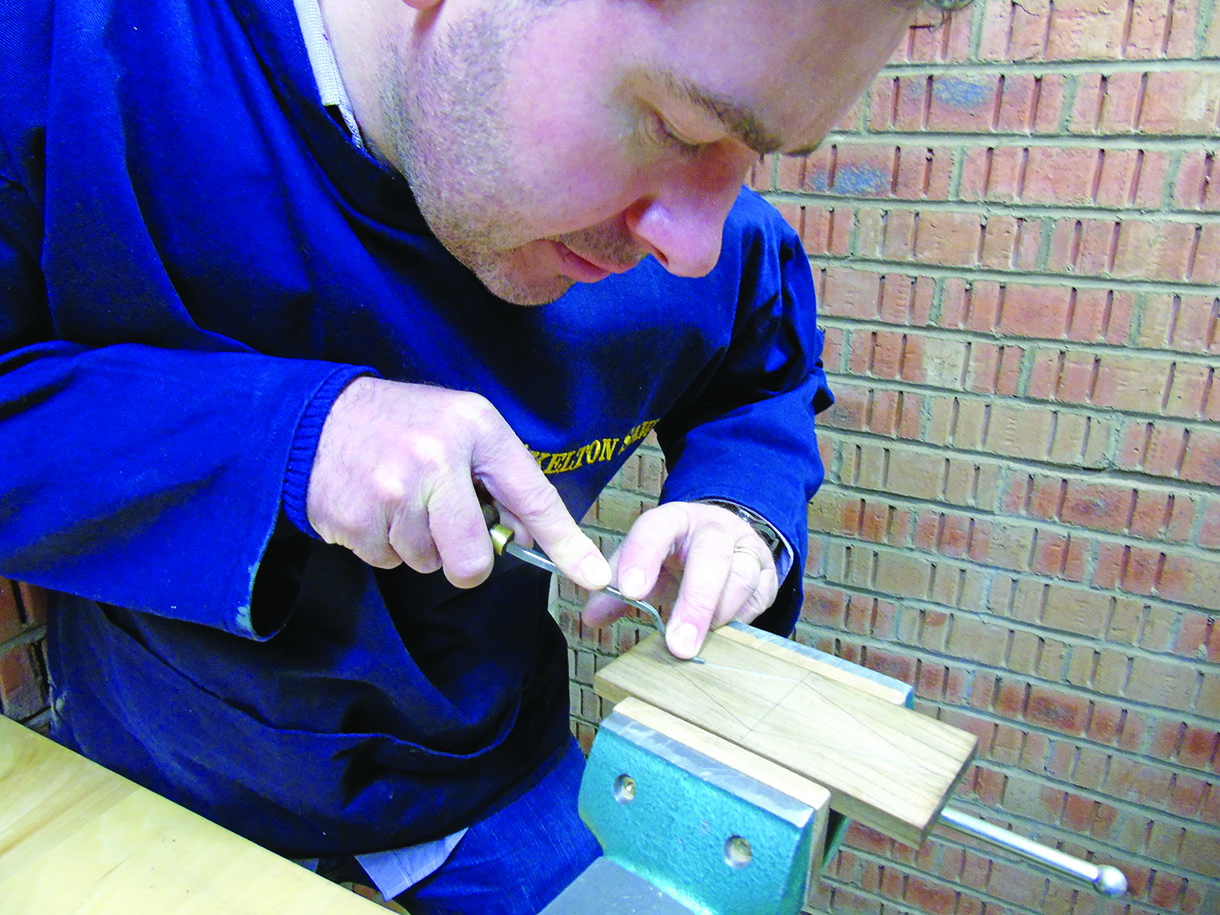 Although the art of chequering has been around for many hundreds of years, it was first seen used in England in the late 18th century. British gunsmiths realised that by producing a sturdy chequered grip one could eliminate the problem of guns slipping from a shooter’s hand in damp conditions. So what is chequering? Well basically it is the intersecting of a series of V-troughed parallel lines to produce a diamond pattern. The human eye being naturally drawn to straight lines, makes chequering not only functional, but also decorative and aesthetically pleasing. While this technique is synonymous with gunstocks, it can also be found as an accent feature on tools, furniture and small decorative objectssuch as jewellery boxes. Providing a grip to any surface,chequering can be employed in both wood and metalwork. Traditionally done by hand, this skill has largely been lost due to industrialisation and the introduction of machines, stamps and lasers to speed up manufacture. However, it must be noted that chequering of superior quality can still only be achieved by hand and is only done so by the world’s best gunsmiths and artisans, those who are able to create the crispness of corners that a machine could never reproduce. There are lots of different styles of chequering including: Pointed, Flat Top, Semi-Flat Top and Skip Line (also known as Scottish Chequering because of the tartan-like effect that is created). In this article, however, Shane, who re-chequered many gunstocks during his employment as a gunsmith, is demonstrating the basic technique of Pointed Chequering. Although the patterns and borders can be taken to extremes, with an equal amount of patience and practice the basic art of chequering can be accomplished.

Tools for the job
Back in the day there used to be an array of chequering tools available from a number of different makers, for those who didn’t produce their own tools by hand. Today, however, these tools are less accessible and unless you come across a good vintage find your best bet is a Dem-Bart tool. They still produce a variety of cutters, handles and marking out gauges. Effectively mini saws, the teeth on chequering tools range from 16–32tpi, additionally specialist tool heads are also available. It’s good to bear in mind that the finer the tooth of your tool, the harder it is to work, therefore we would suggest not going any finer than 20tpi to begin with. In fact all the tools shown here can be purchased rather inexpensively from Peter Dyson & Son Ltd of Holmfirth, Yorkshire. Additionally you will require a sharp pencil, a ruler and a toothbrush for cleaning and applying a finish. The most common wood on which to apply chequering and the main timber used in gunstock production is walnut (Juglans regia). However, any tight grained hardwood, for example beech (Fraxinus exelsior), maple (Acer campestre) or rosewood (Dalbergia spp.), can be chequered. The raised crisp diamonds that are being cut in need a certain amount of strength which some open-grained hardwoods such as oak (Quercus robur) and elm (Ulmus procera) couldn’t offer. Always practice first and build up your confidence and muscle memory using some scrap wood before setting out onto finer projects. 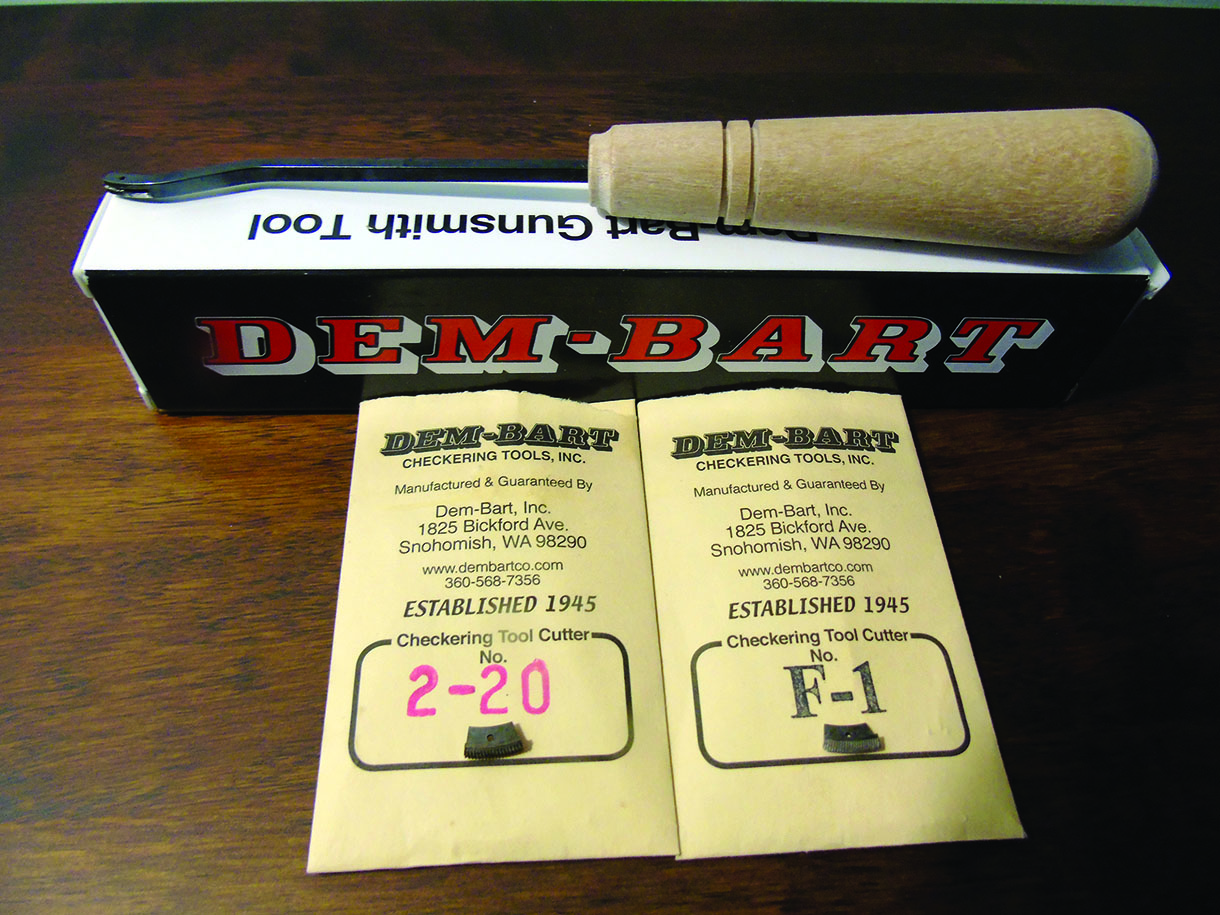 The basic tools required to get you started 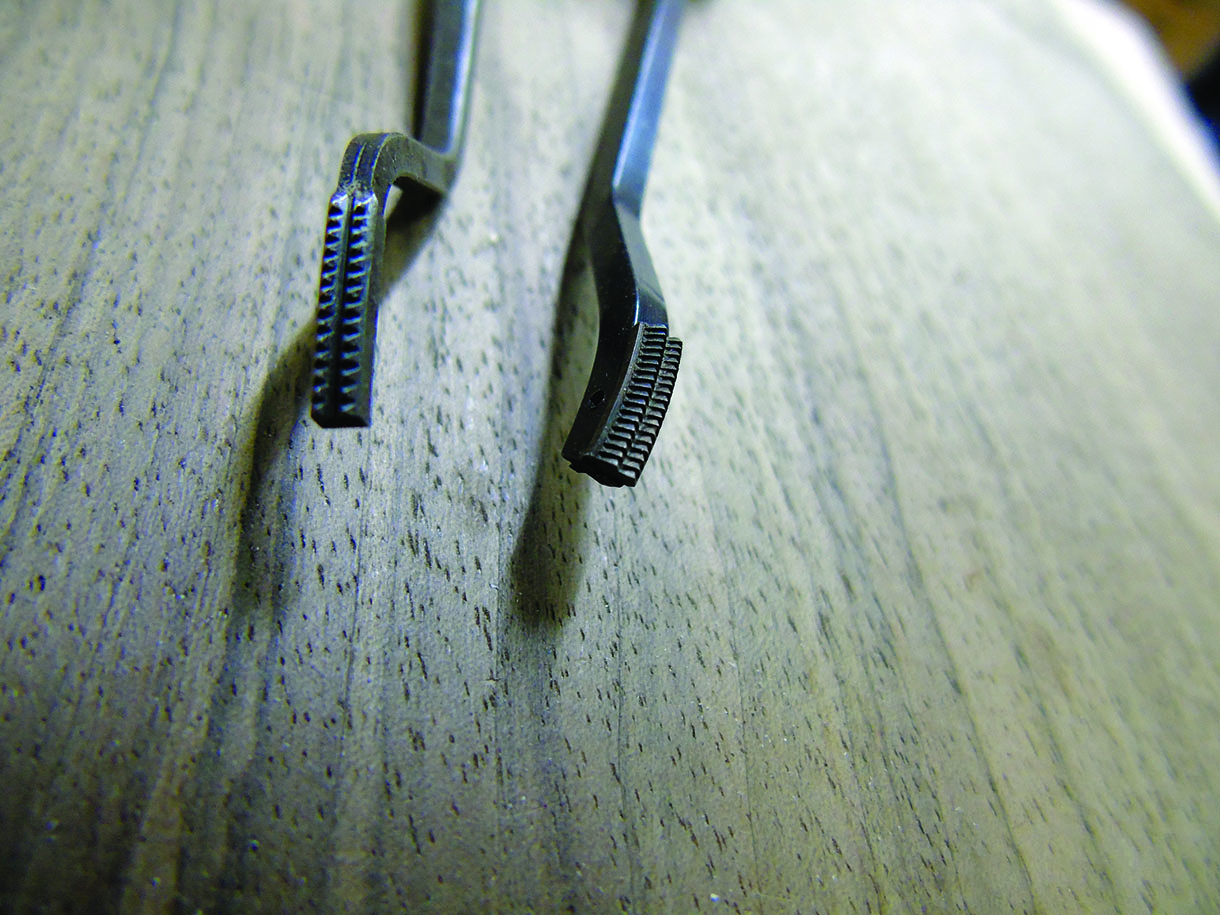 Marking out
To illustrate the Pointed Chequering technique, Shane has decided to show you how to create a traditional diamond shape. To begin with, using a sharp pencil and a ruler first draw out a diamond shape on your piece of wood. If you are not using a marking gauge one must remember that a diamond is always between three and three and a half times longer than its width, the diamond point equates to around 33° with the flats being parallel to one another. 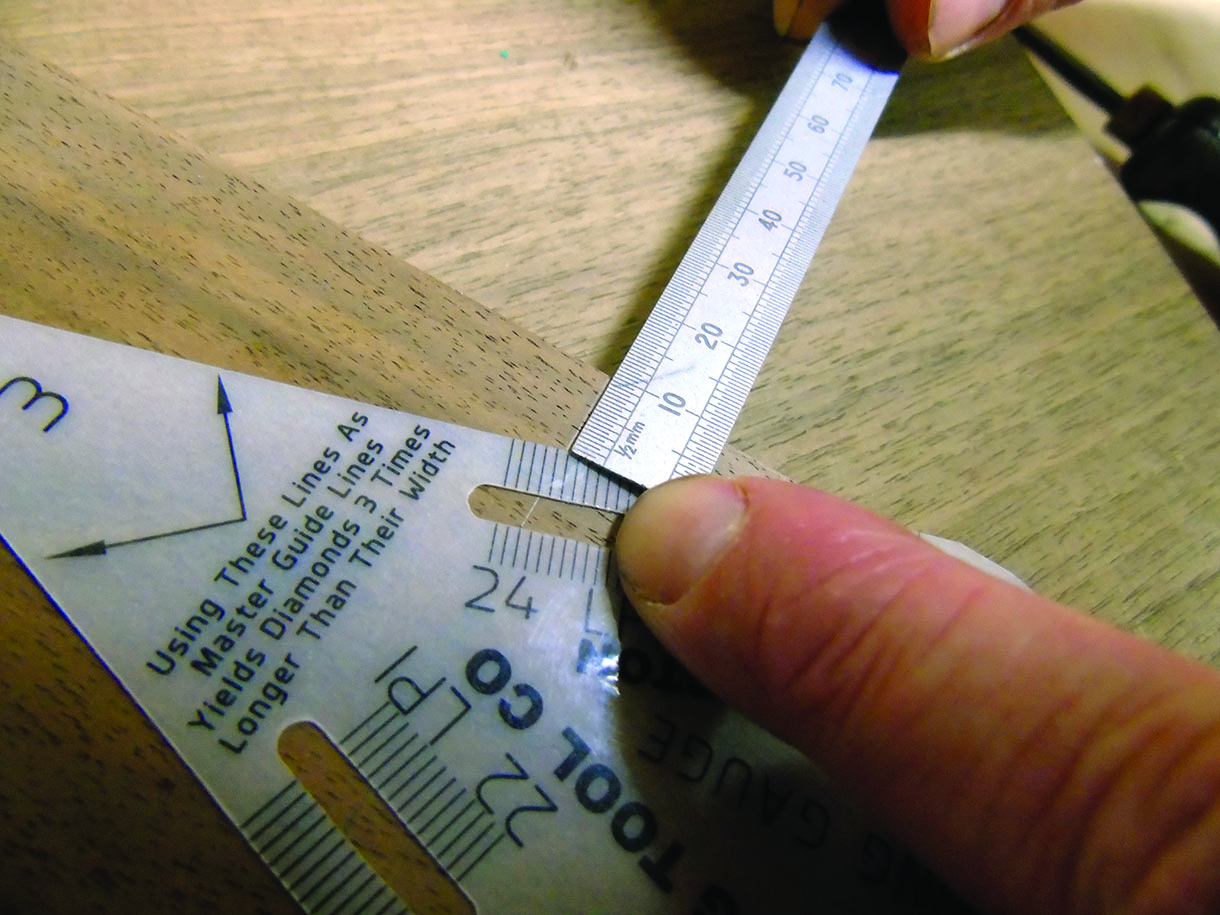 Using the chequering gauge, mark out the angles for your diamond 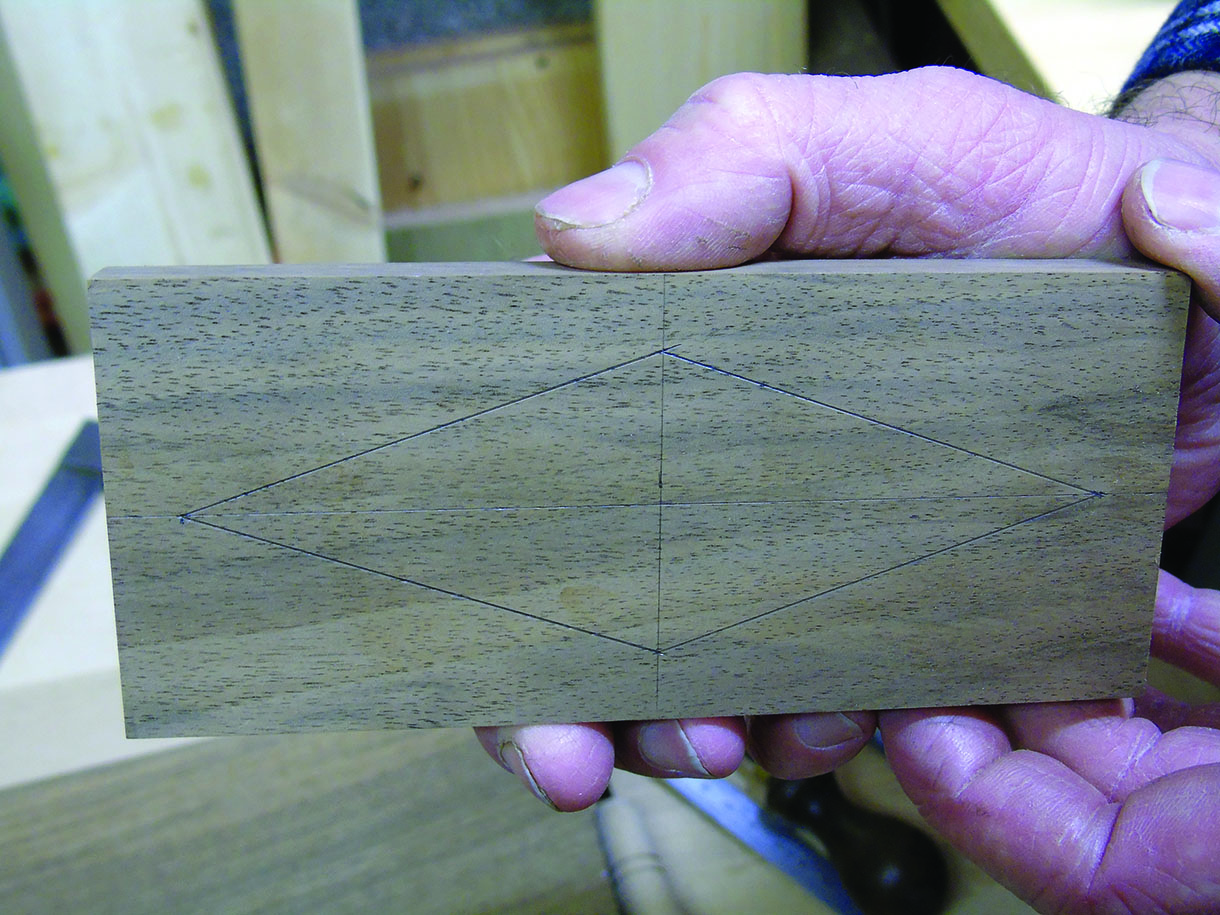 Forming the border
Using a two-row cutter chequering tool, place the tips of the outer row of teeth on the pencil line of your diamond border. Lightly push the tool forward along the line, engaging only one row of teeth by slightly canting the tool from vertical. This will start to form a trough along the marked edge.
Be aware that you don’t require a great amount of force as you don’t need to cut deep at this stage. Repeat this process around all of the sides of the diamond. Now place the tool in the single trough
that has been formed. Again lightly push the tool forward and slightly roll it vertical to form the second trough. Continue with this procedure all the way around the border, taking care not to overshoot. 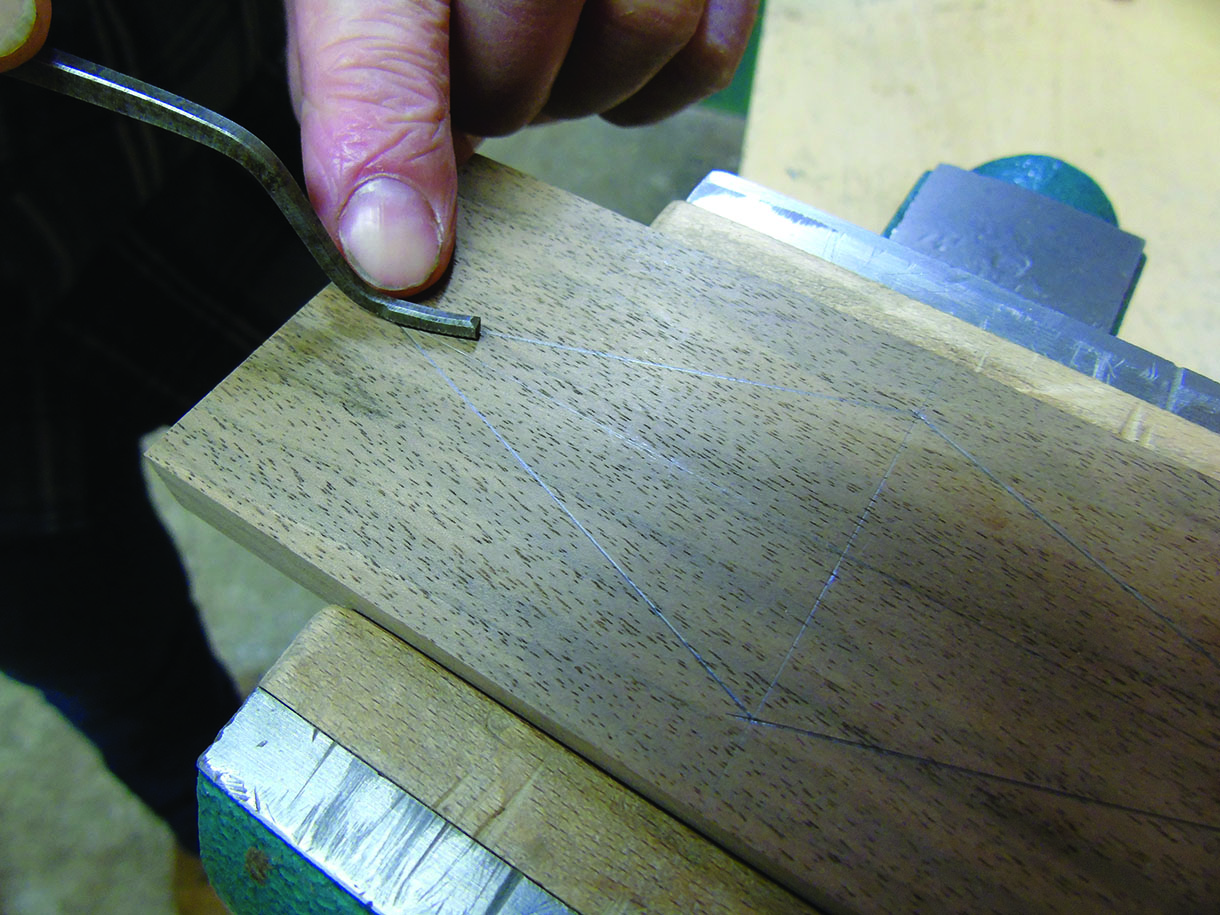 Placing the inside edge row of teeth against the marked line 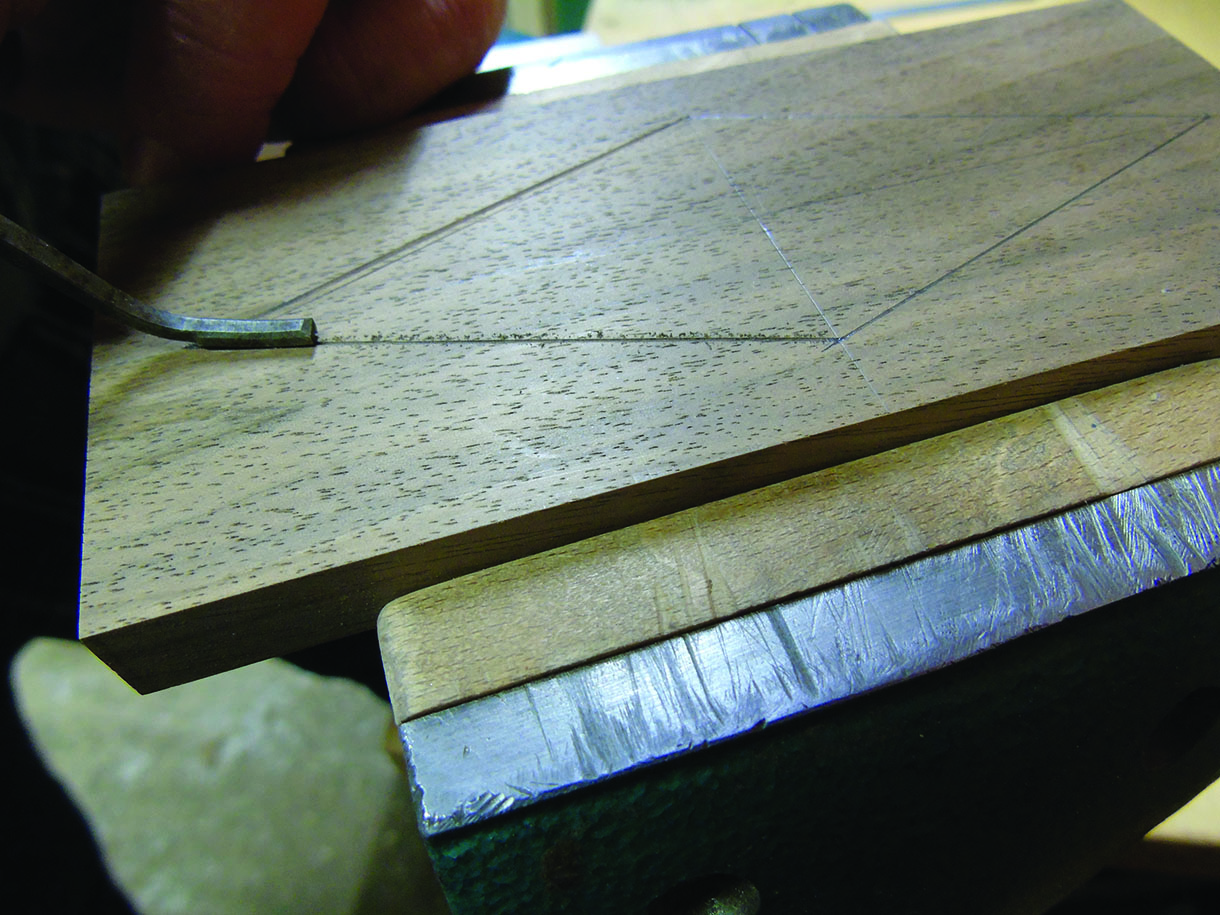 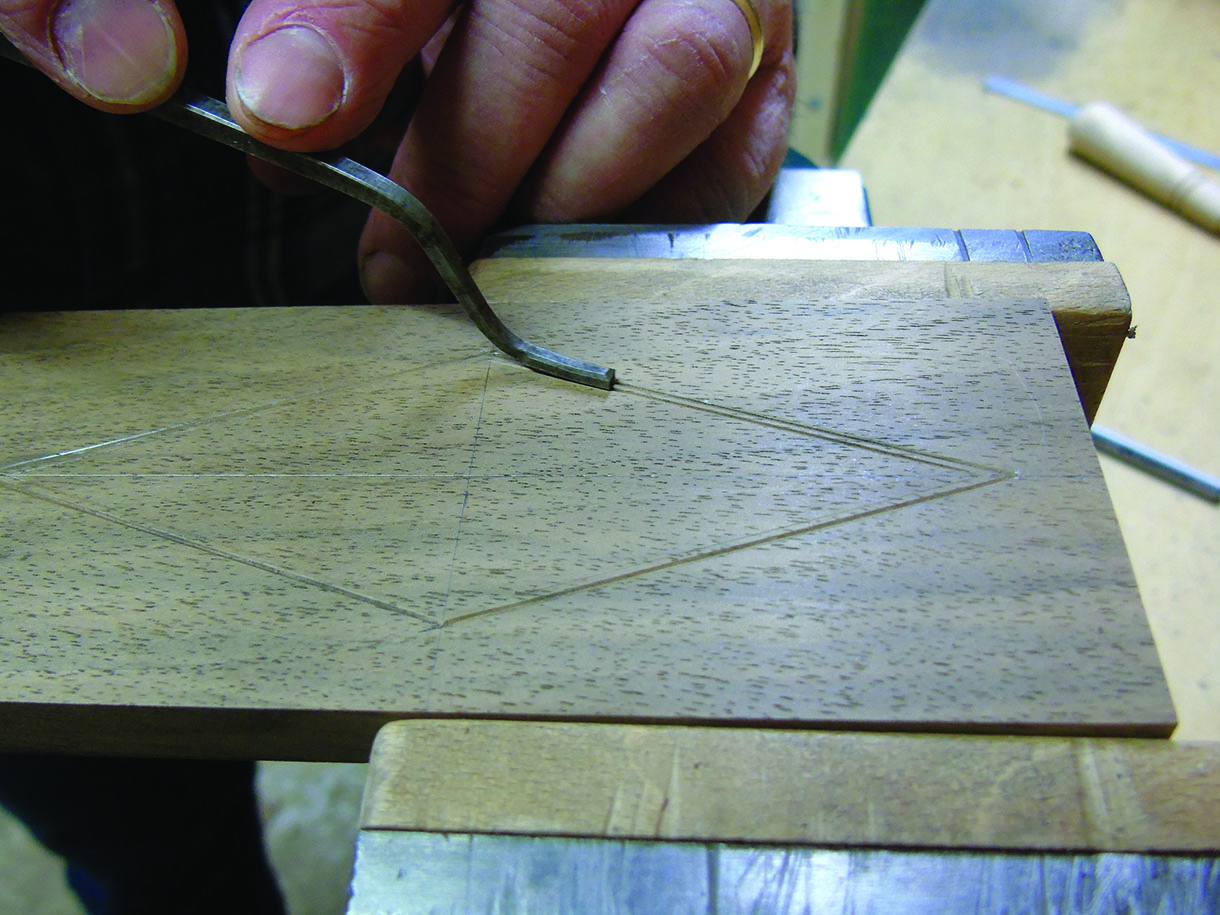 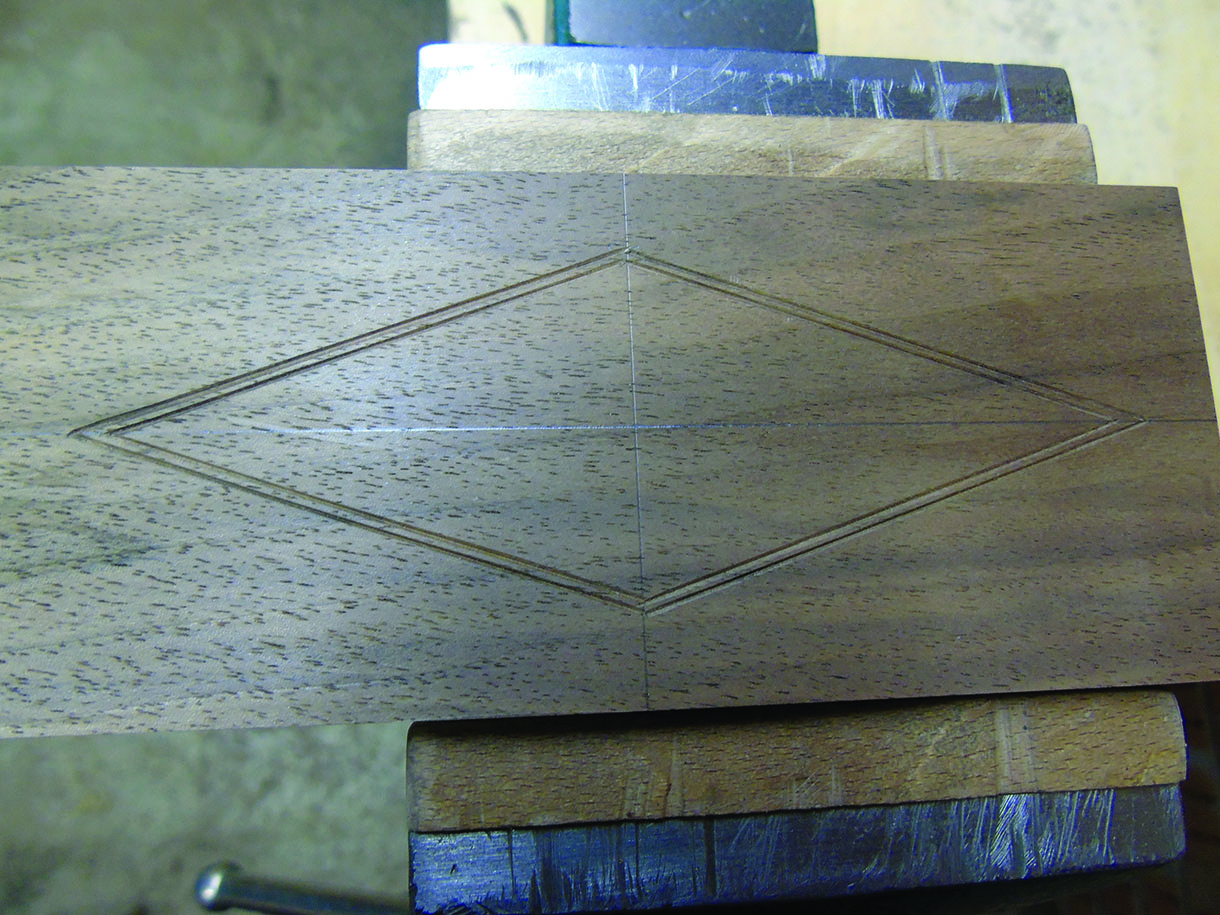 Forming the diamond
Follow the procedure as before to create a third trough, a fourth, fifth and so on until around eight lines from the border are complete. Then, placing the tool on the opposite border of the diamond, use the same technique. Working your way in you will begin to see the lines intersecting and a diamond pattern will begin to form. This process is repeated, working from either side until the whole of the diamond is covered. As you are always pushing outwards towards the border, care is needed so as not to cut into it in error. Following this, your diamonds should all now be fully formed. 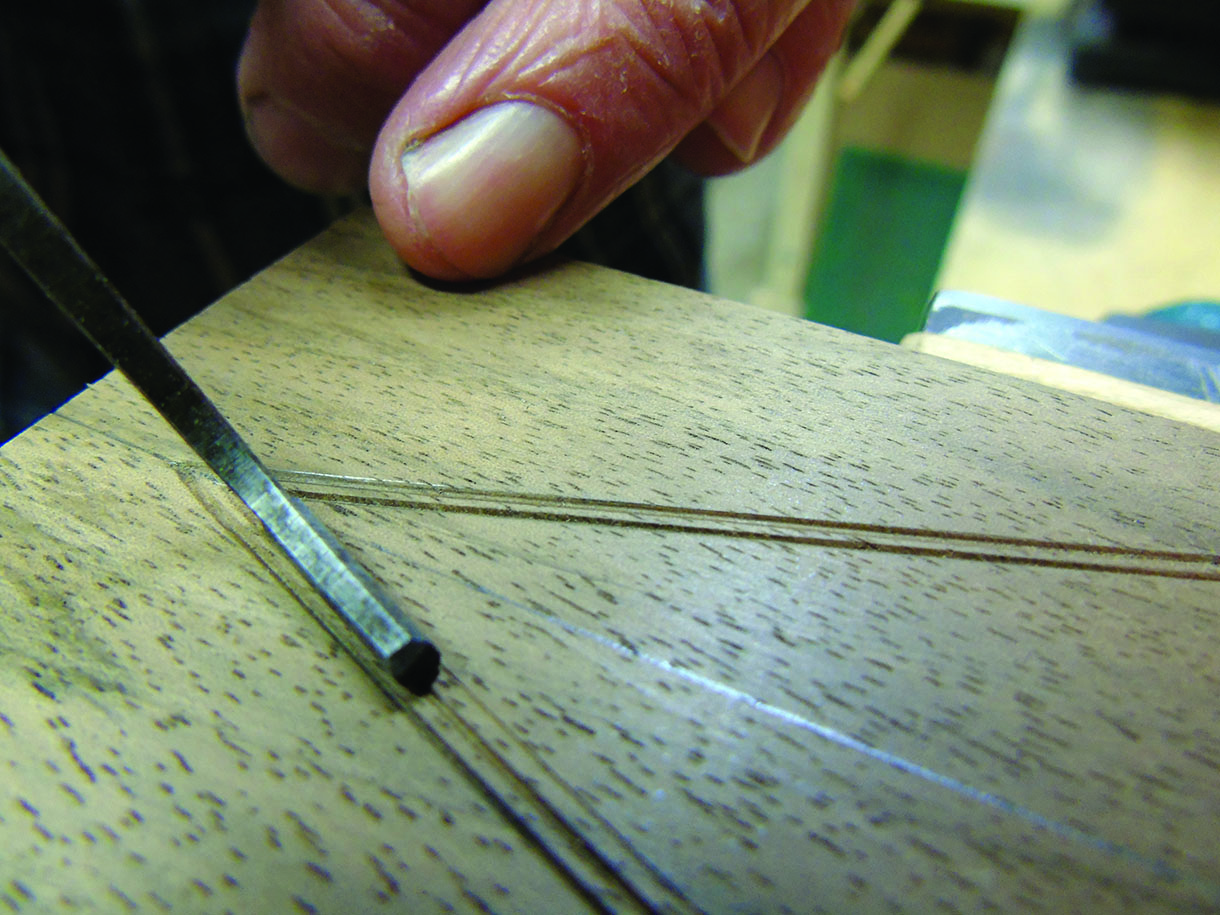 Using the inner border to form the third trough 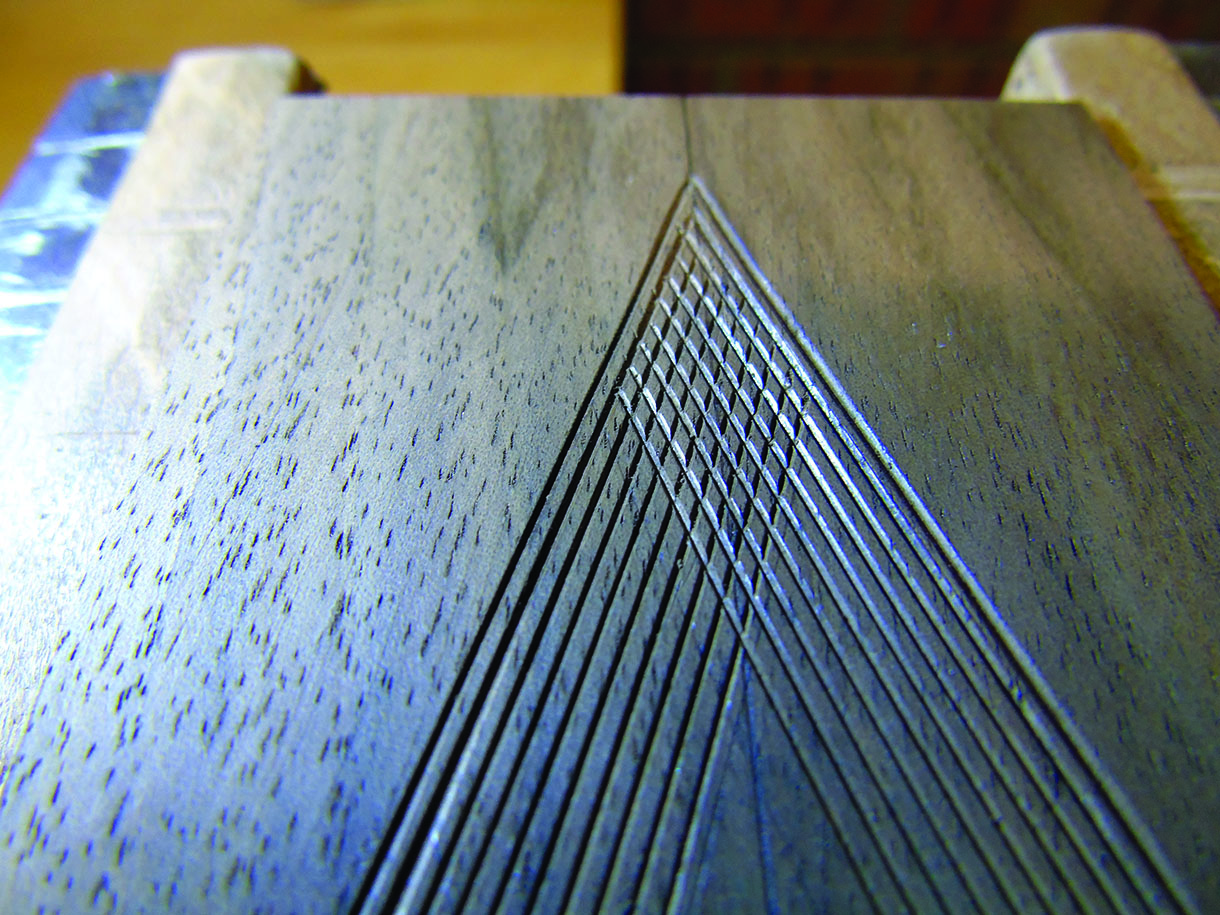 Deepening the cuts
Using the same cutting tool, you are now going to re-cut all of the rows as before until the tool bottoms out and it won’t cut anymore. Making the troughs deeper will raise the diamonds to a point. Note that the deeper you cut the more fragile the diamonds are becoming, therefore take care not to use the nose of the cutter at this stage so as to prevent the diamonds from chipping. You must always use the teeth behind the nose to cut. As you work, clear the waste away from the troughs using a toothbrush, this will eliminate the chances of the chequering tool skipping. 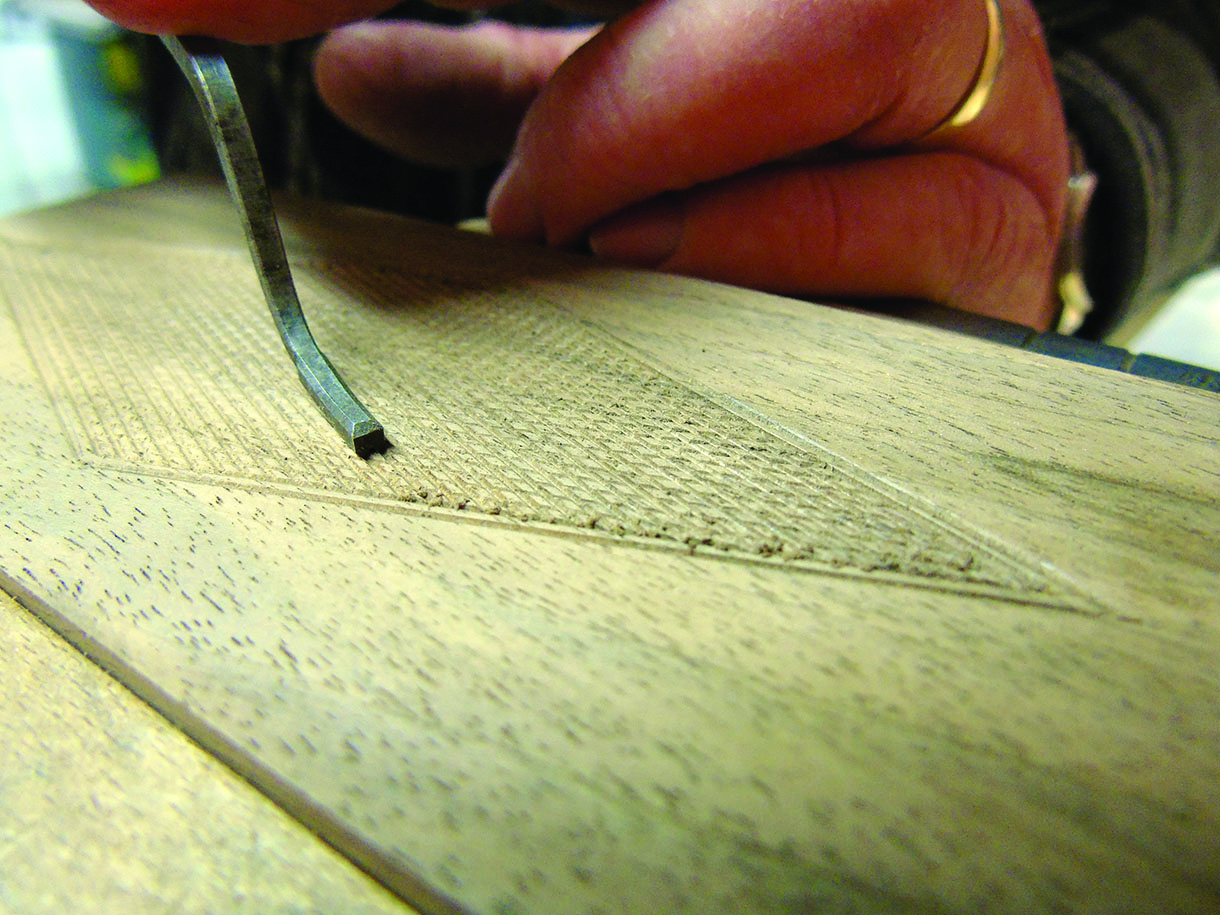 Deepening the rows up to the border edge 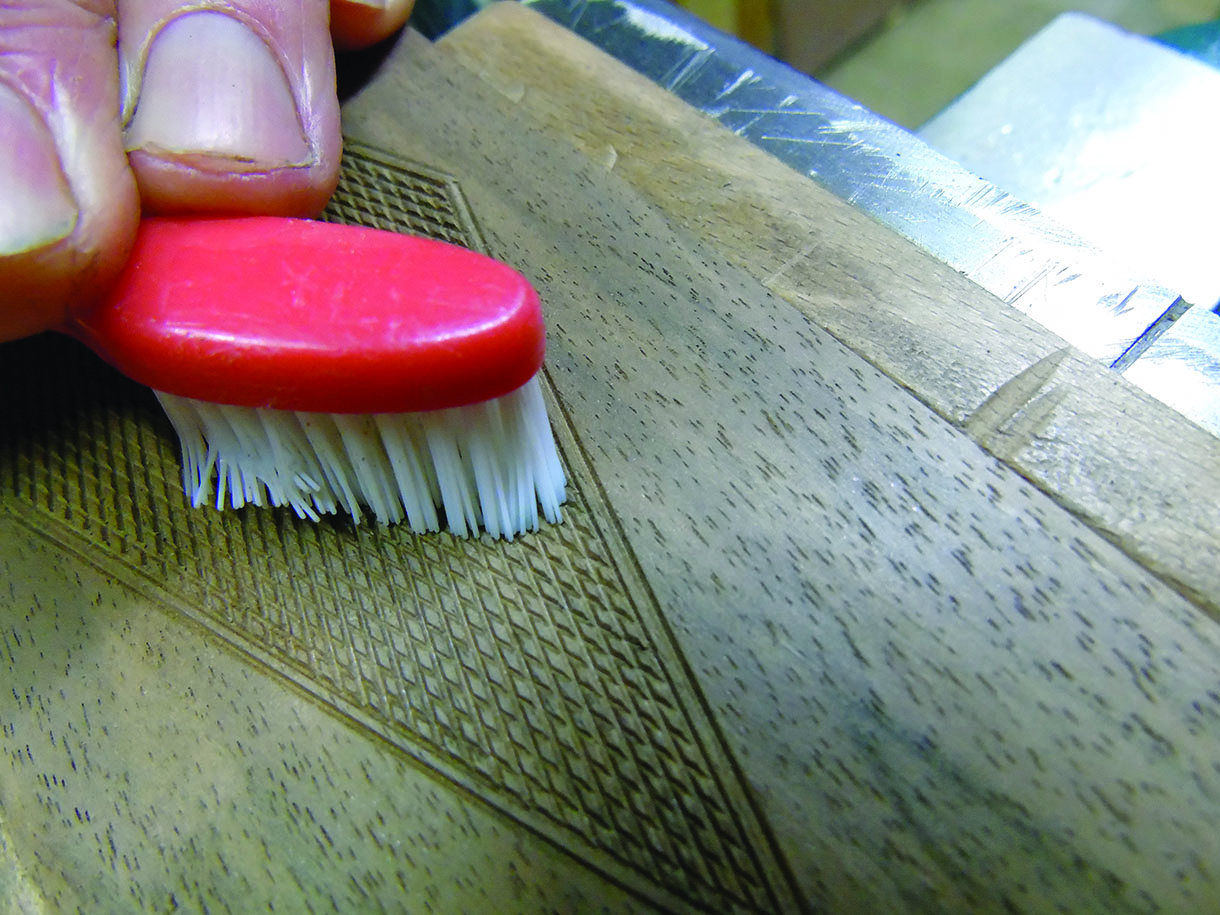 Smoothing out
Change the two-row cutter you have been using to a single-row one. As illustrated in
the photograph we have used an F1. Holding the chequering tool vertical, re-cut each individual row to the inner edges of the border, this will produce a fine-edged diamond. Ensure that all troughs are of an equal depth and that all of the diamonds are now fully formed up to the border. The border can now be cut using this tool to form a really crisp line around the edge. Using fine wire wool, lightly rub over the chequering to remove any surface burring and to polish the sides of the diamonds. Again, use your trusty toothbrush to remove any remaining debris. 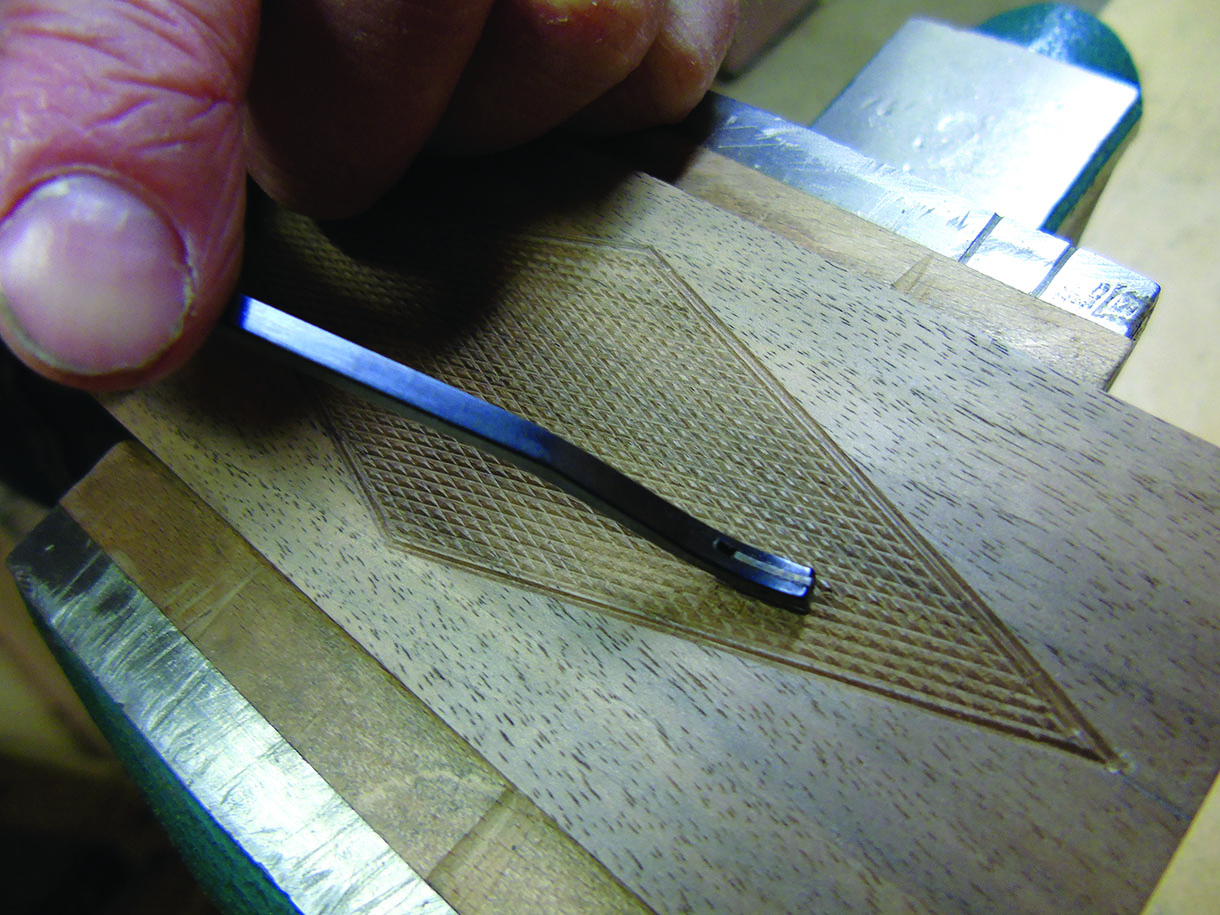 A single row cutter smoothing out each row 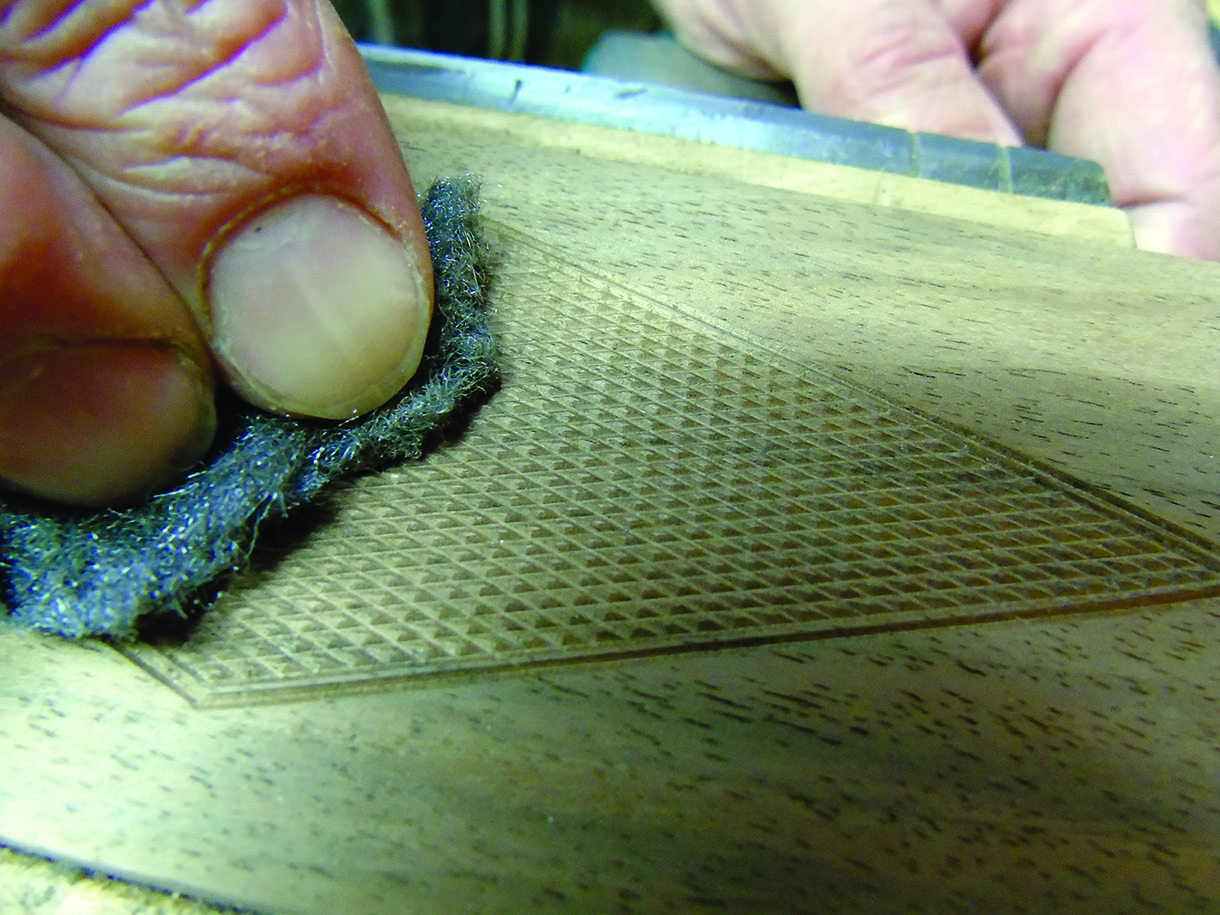 Finishing
Chequering should always be oil finished for the best seal. Again, using a toothbrush work the oil (we’ve used boiled linseed) into all the nooks and crannies, leave for 20 minutes and then mop up the excess and pat dry with some paper towel. And there you have it – your diamond that’s forever! 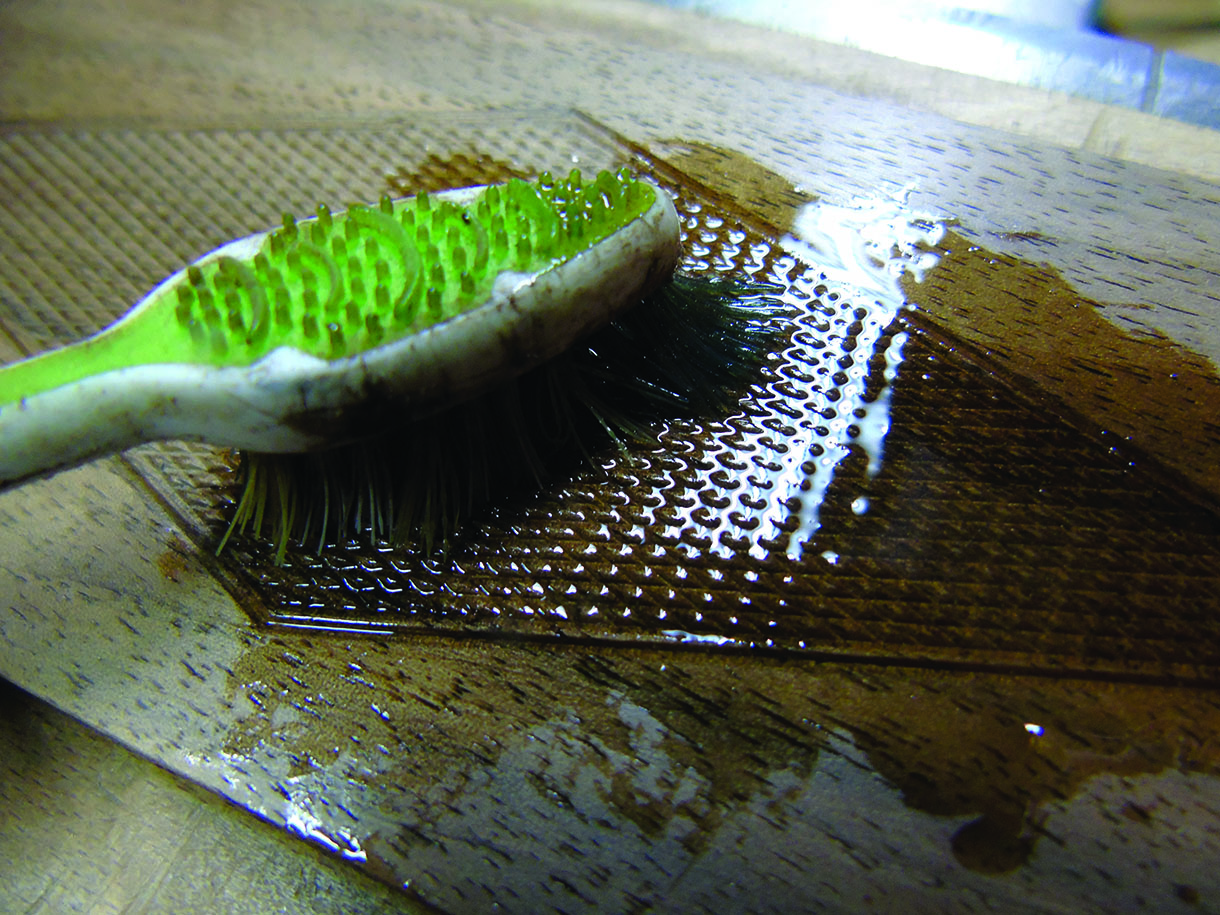 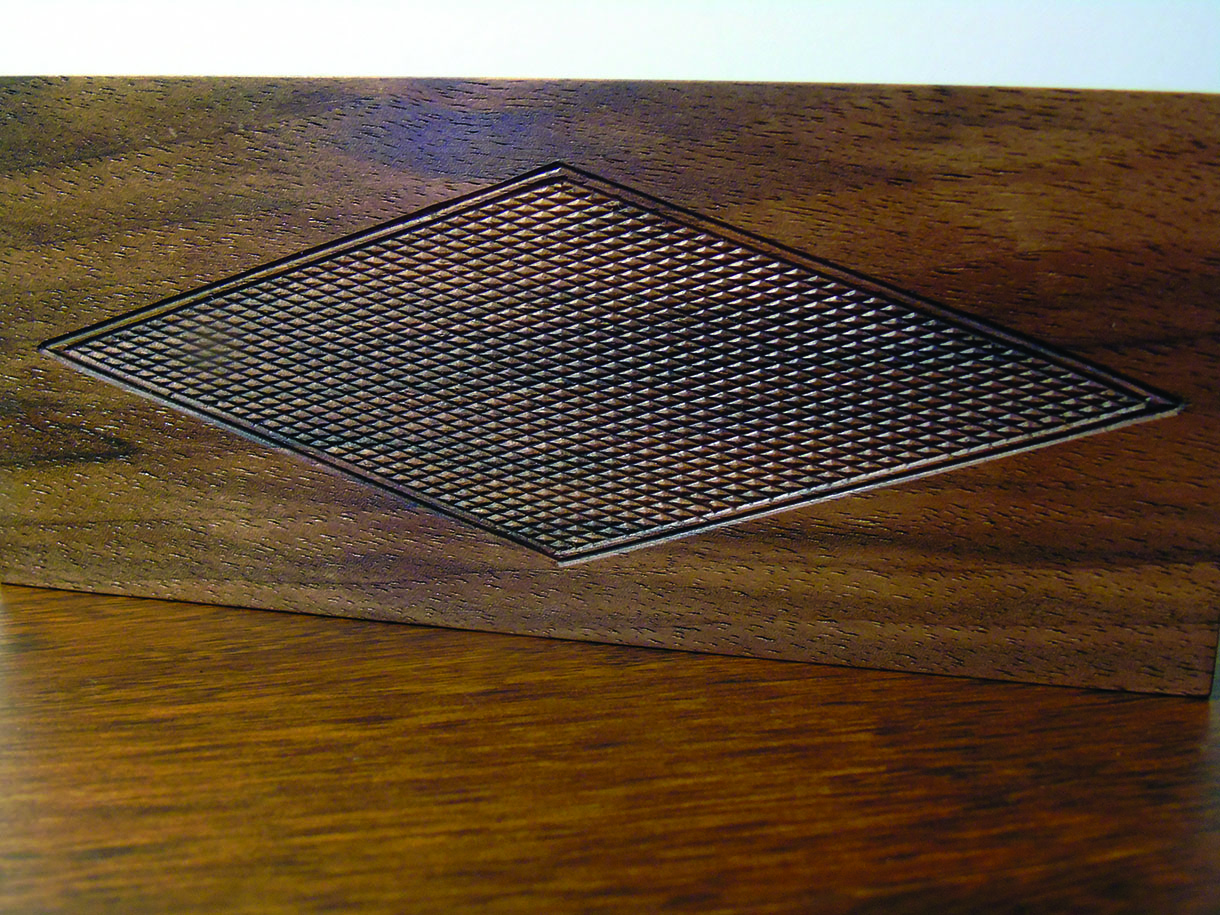 References
The Checkering and Carving of Gunstocks by Monty Kennedy, Stackpole Books, 1981