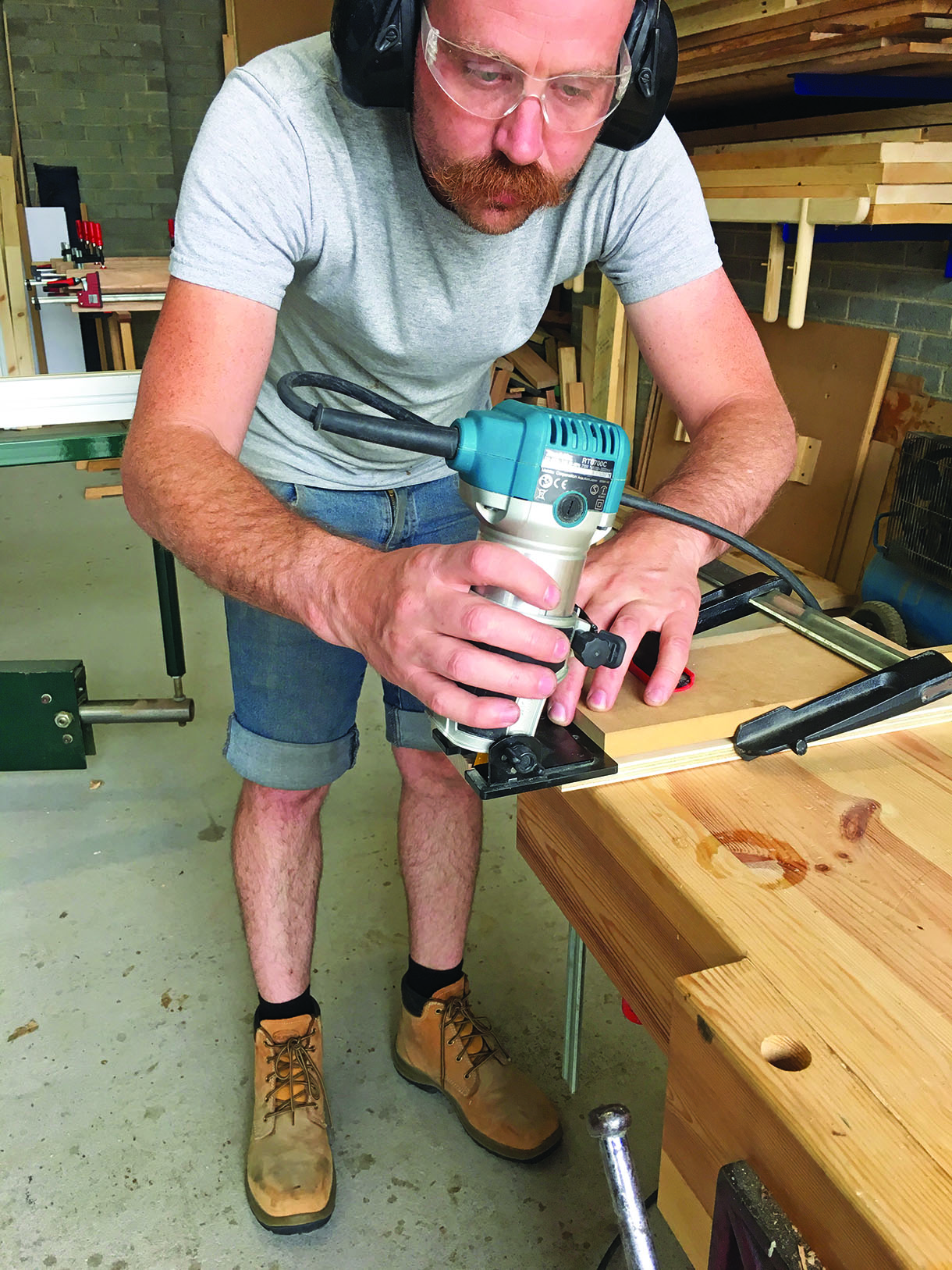 A dining table commission came into the workshop recently that required an oak (Quercus robur) base capable of holding a 100kg concrete top. The weight of the top coupled with the client’s design meant some sturdy joinery was required for the legs and rails. I decided the best solution was to opt for a sliding dovetail joint. With this in mind I set about trying to find an easier way to cut this somewhat complex joint on the ends of long table components.

Process of elimination
A solution was needed to enable the quick and accurate production of the sliding dovetail joinery. To add further complexity to the task, the rails requiring sliding dovetails would be angled by 2° to match an inside tapered leg profile.
I evaluated several options, including using the more conventional method of a dovetail cutter in a router, hand-held and running against a guide along the end of the rail. I also considered using the same cutter but mounted in a router table with an angled jig to hold the long rail upright at 2°. Finally, I considered using my combination saw and spindle moulder with sliding table. This option would allow the rail to sit flat on the sliding table, then using a 4mm grooving cutter in the spindle moulder tilted to 7° and the fence angled at 2°, the dovetail would be cut in two passes, being flipped over between each pass and the angle of the fence changed.
Each traditional method of cutting this joint had its merits but each one was also a compromise of sorts. With the rails being so long I felt that the two router options were unsuitable as the workpiece could not be handled or worked on in a way that was safe and accurate requiring either extensive work holding jigs to balance either the router or workpiece.
Similarly the spindle moulder option would require a number of cutting operations per dovetail as well as additional setup time, with adjustment of the fence angle as well as further hand tool fettling to fit the final joint, cleaning up the intersection of the dovetail and shoulder, which would be left square by the cutter. After each method was dismissed I kept coming back to the dovetail router bit itself – maybe I was looking at it all wrong. 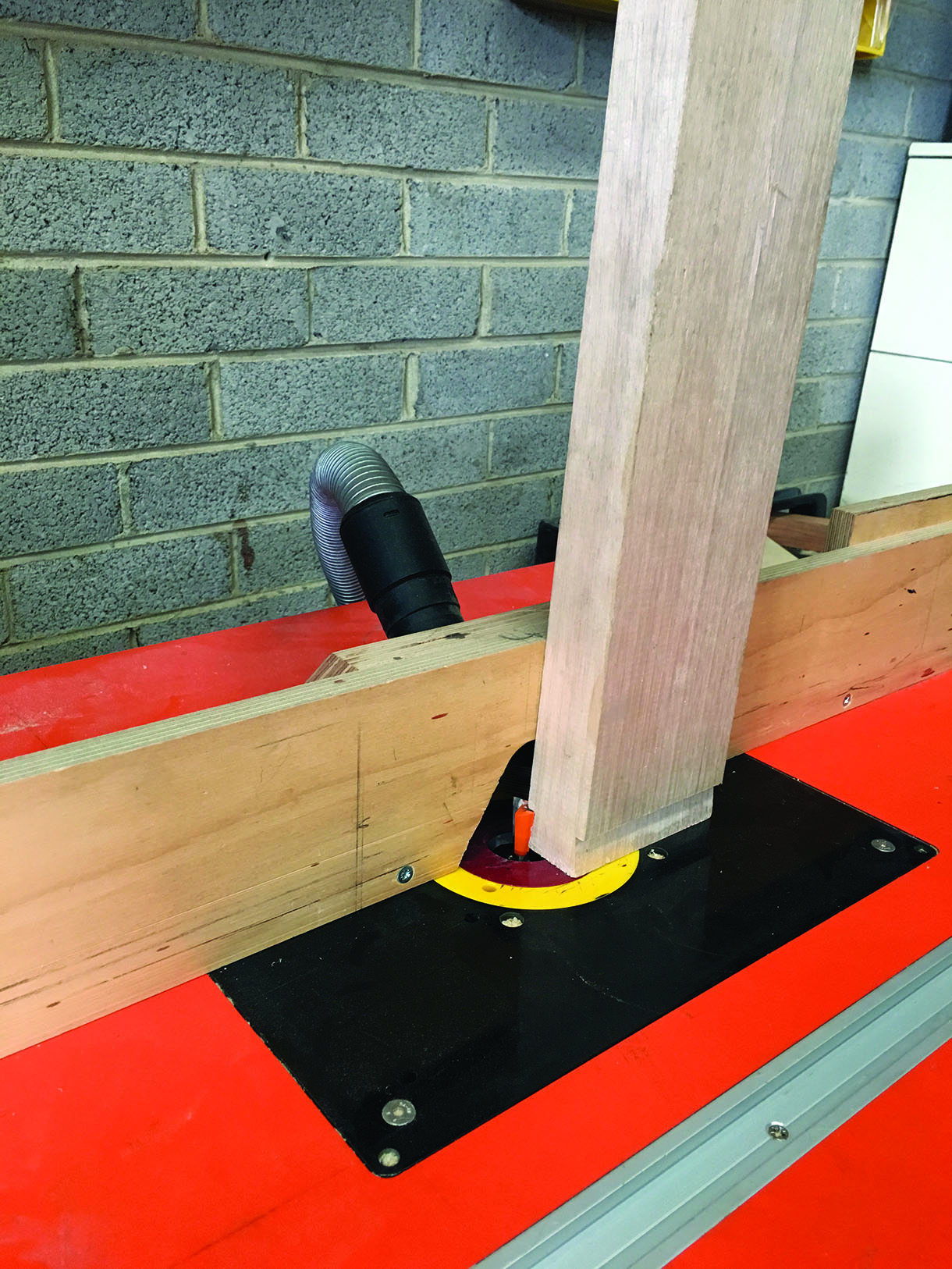 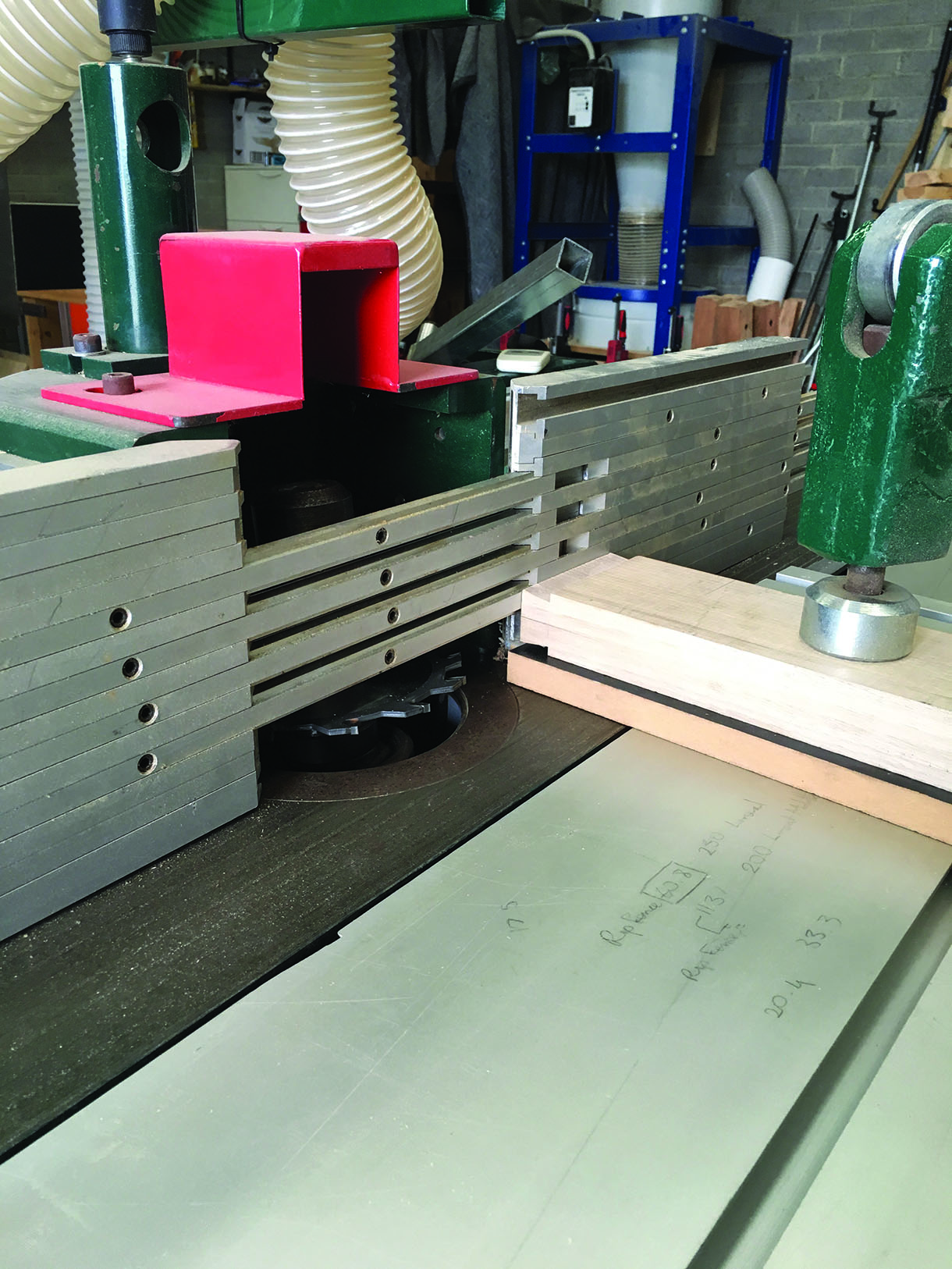 Testing the tilt
A couple of years ago I purchased a Makita CT0700CX2 trim router that came with a number of additional accessories including a plunge router base as well as tilt base. With my long workpiece flat on the bench and the router upright I wondered if the tilting base accessory could be used in conjunction with a standard dovetail router bit to cut the sliding dovetail. Time to test my idea.
A simple guide was made out of MDF and clamped to a test piece for the tilt base of the trim router to run against. Like fitting a tenon to a mortise, the pin part of the sliding dovetail was machined first as often it can be easier fitting the tail part to pin. This does mean some careful adjustment of the depth of cut
is needed, something which can be done with a little trial and error with this router.
A quick test was in order. Knowing that the shoulder of my dovetail needed to be 90°, with the router base tilted over and the dovetail bit in the collet, a square was sat firmly on the base up against the edge of the cutter. When the blade of the square sat flush against the cutter edge I tightened up the thumbscrews that lock off the tilting base.
With the tilt base angle set closely to that of the dovetail bit and a simple guide fence clamped in place a test joint was produced, the resulting sliding dovetail was more than acceptable for a first try. The joint was a good fit and the actual cutting time was comparatively quick. With the right jig and set-up procedures it looked like this method would be good enough to use for the dining table commission. 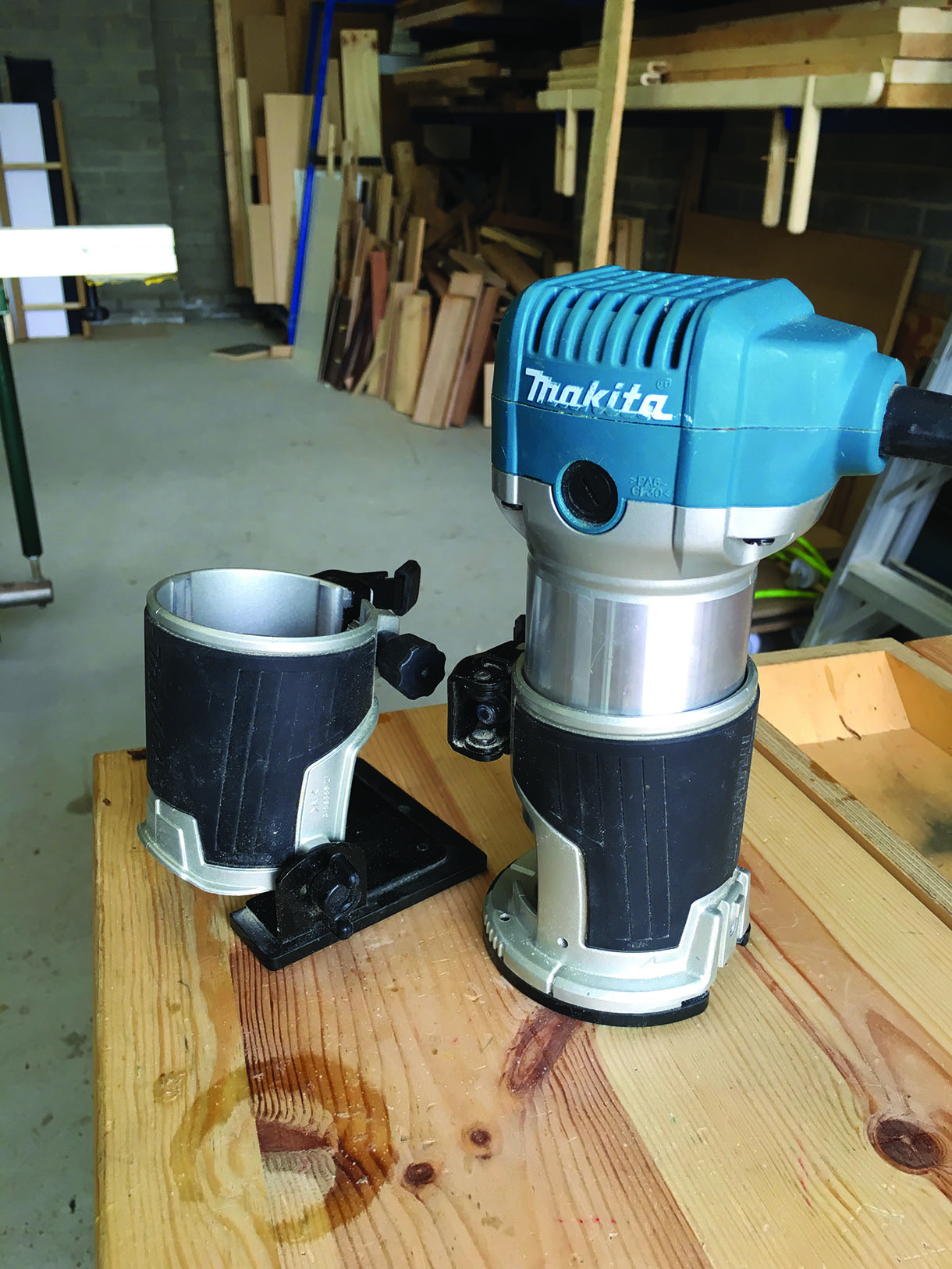 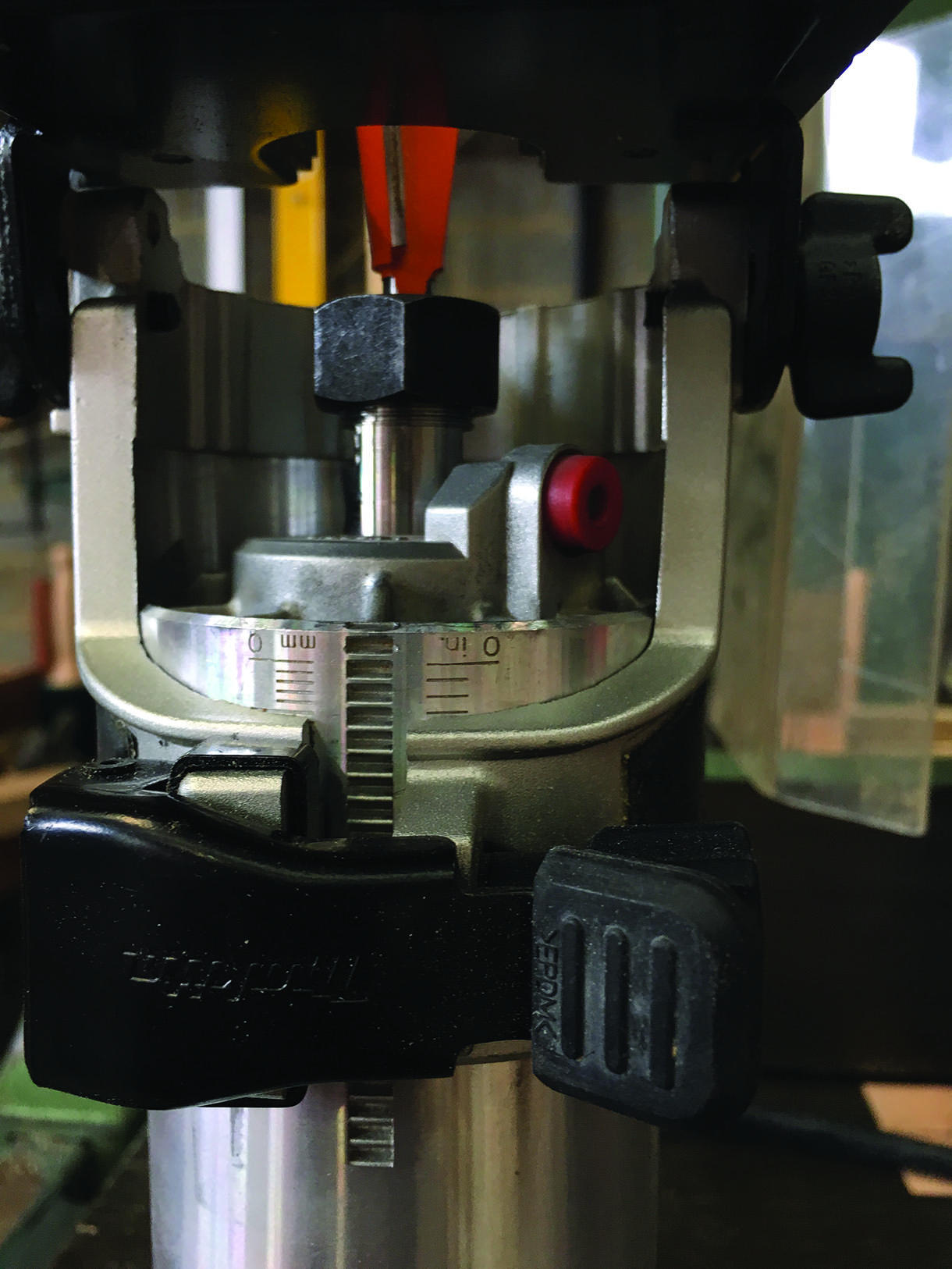 Depth adjustment on the router is simple with some patience 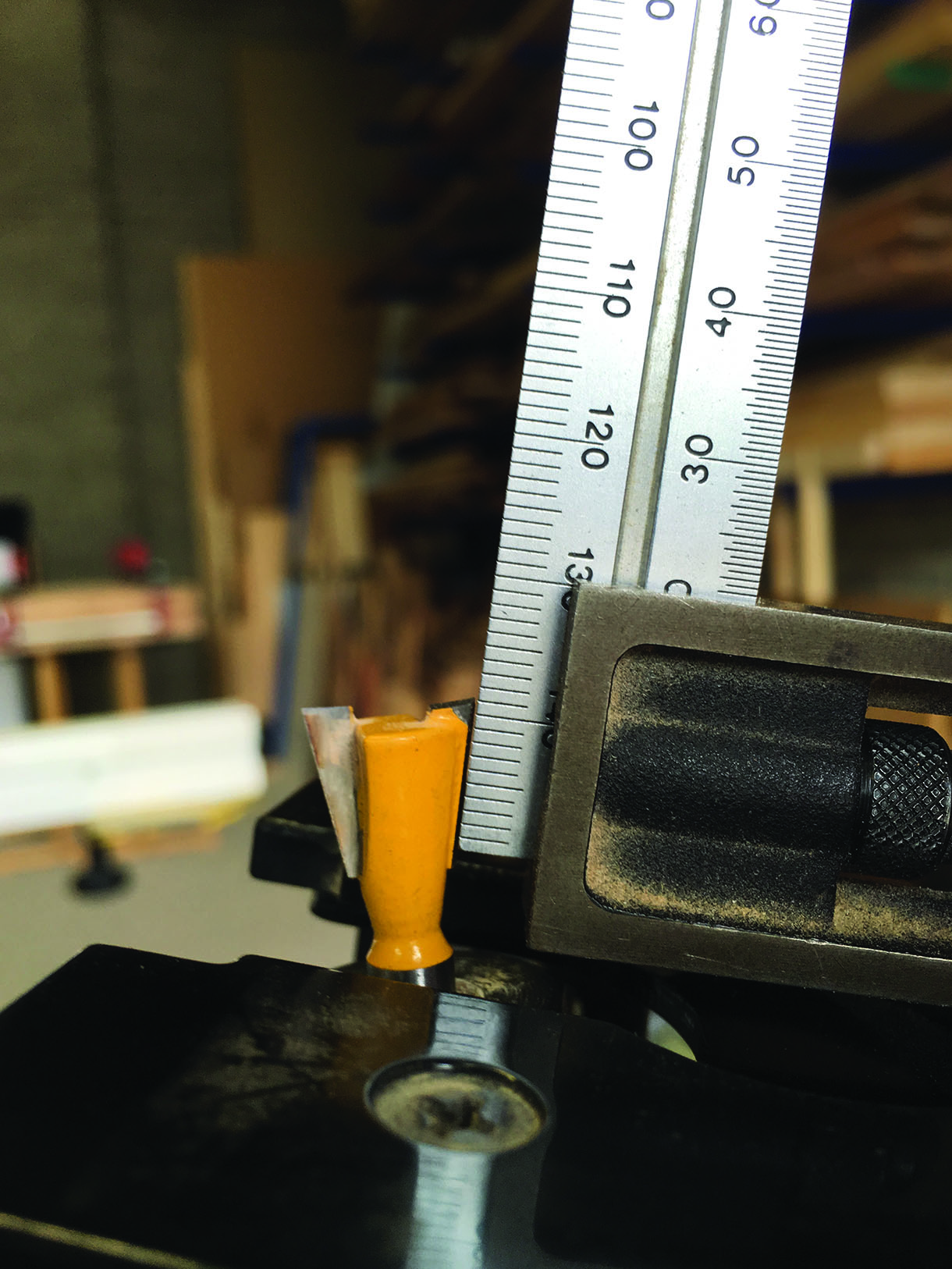 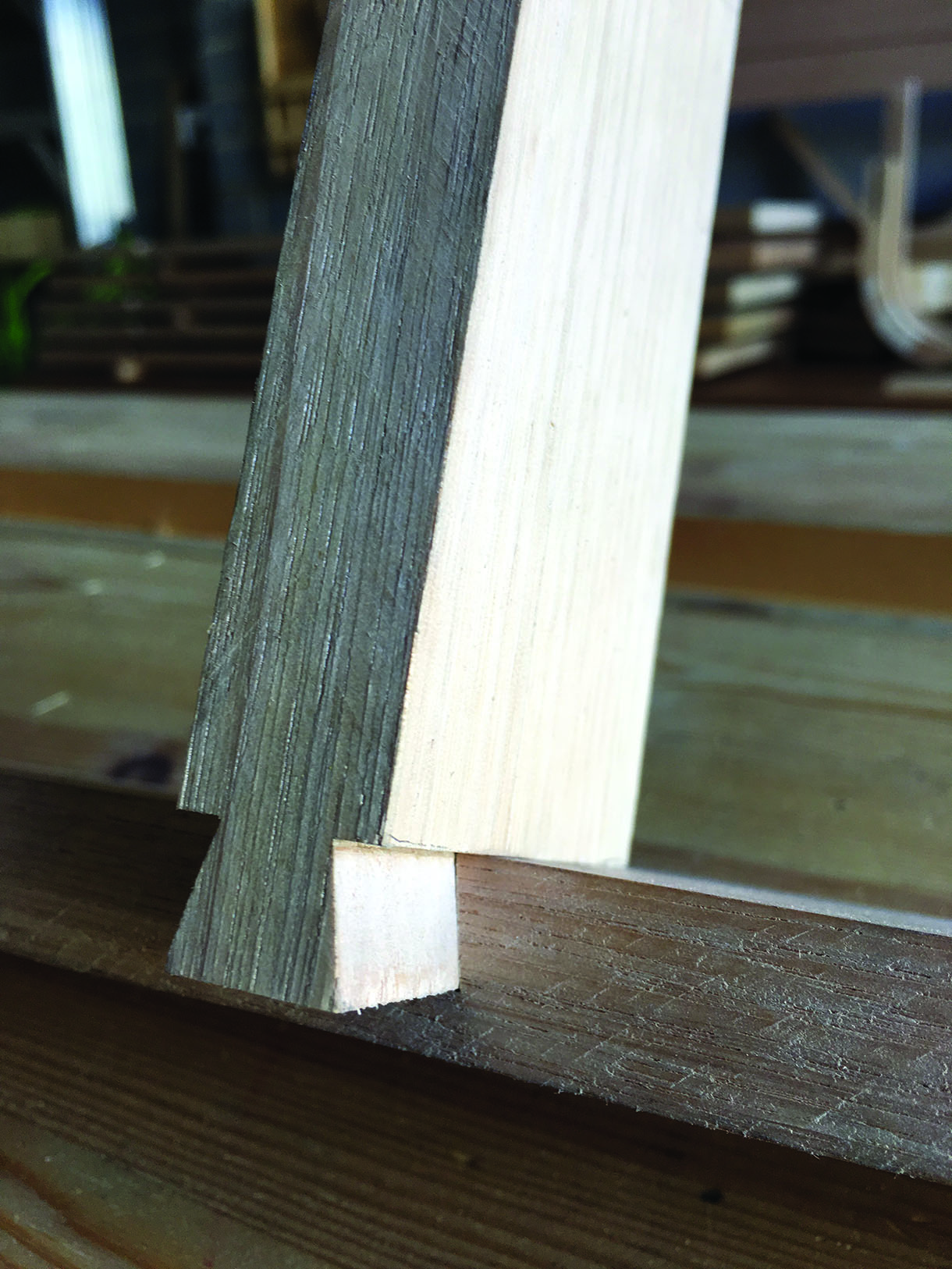 Successful test of the new method

Time for the real thing
Although the test run was a success, further refinement was needed to ensure consistency and accuracy. One area needing improvement was the fence. Rather than clamping one shoulder to the edge of the workpiece and then the whole assembly clamped to the bench, a new jig was made that was an exact fit of the width of the rail now only requiring a couple of clamps to hold in position.
The distance of the angled guide fence from the end of the workpiece needed to produce the correct dovetail length was determined once the pin parts of the joint were cut and some further test pieces completed. From here an MDF spacer was prepared that could be used to accurately align the fence to both faces of the workpiece.
A marking knife was used to mark the shoulders of the joint to help avoid any damage to the fibres caused by the router at the end of the pass. This is also a useful guide to check that the angle and depth of cut are correct before any cutting begins.
The dovetail was cut in one pass. With not a great amount of material being removed, a sharp cutter and steady feed rate, the Makita trim router performed without fault.
The diameter of dovetail bit was slightly less than the required length of the dovetail. This was of little concern, however, as the leftover material at the edge of the dovetail was easily planed flush with a block plane.
The assembly of the finished dovetailed rail required just the right amount of pressure to bring the joint together, one of those small pleasures for woodworkers worldwide.  The final result was a nice clean sliding dovetail, produced easily and quickly on a long table rail component. Success! 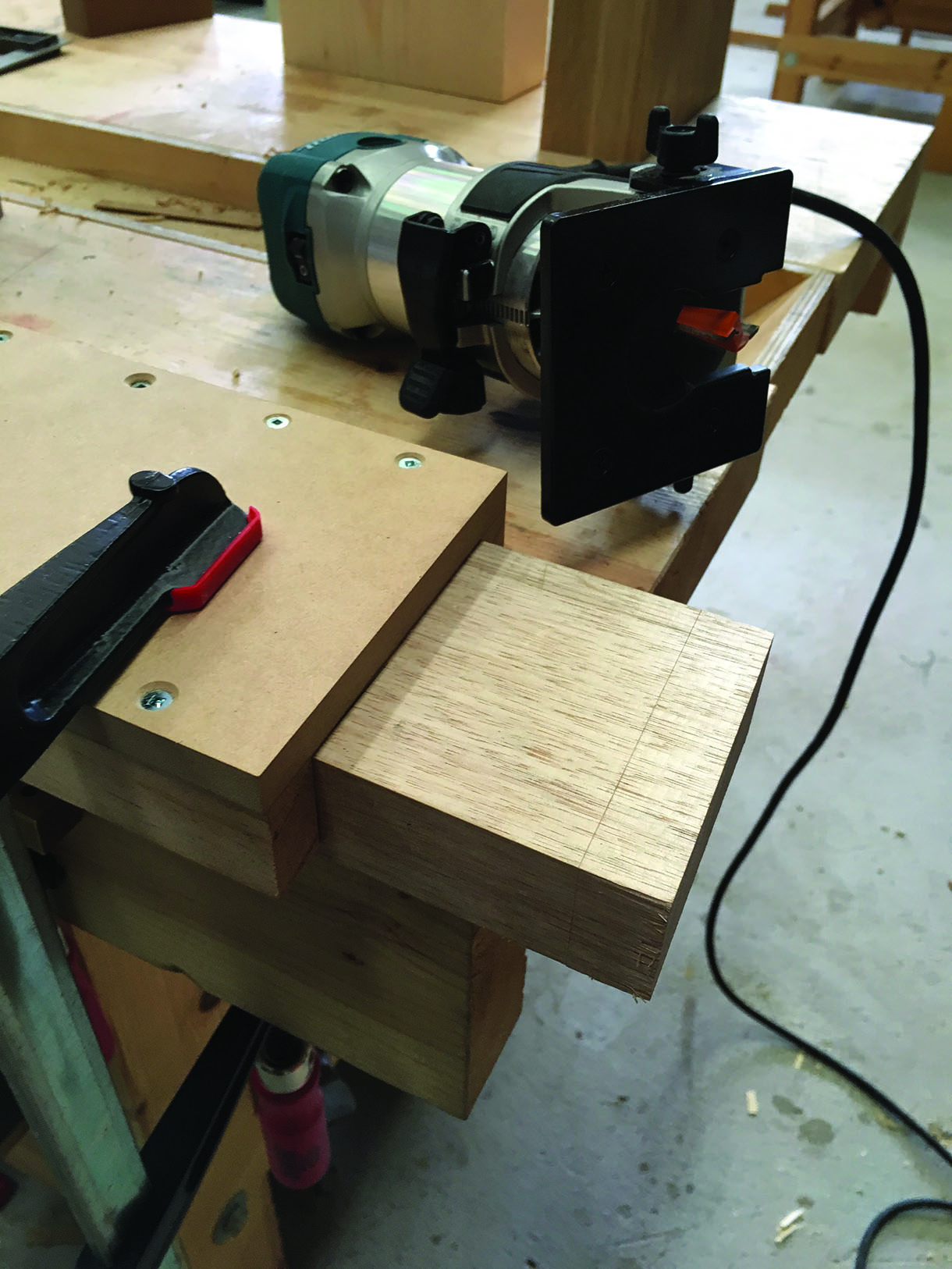 New angled fence jig for the router to run against 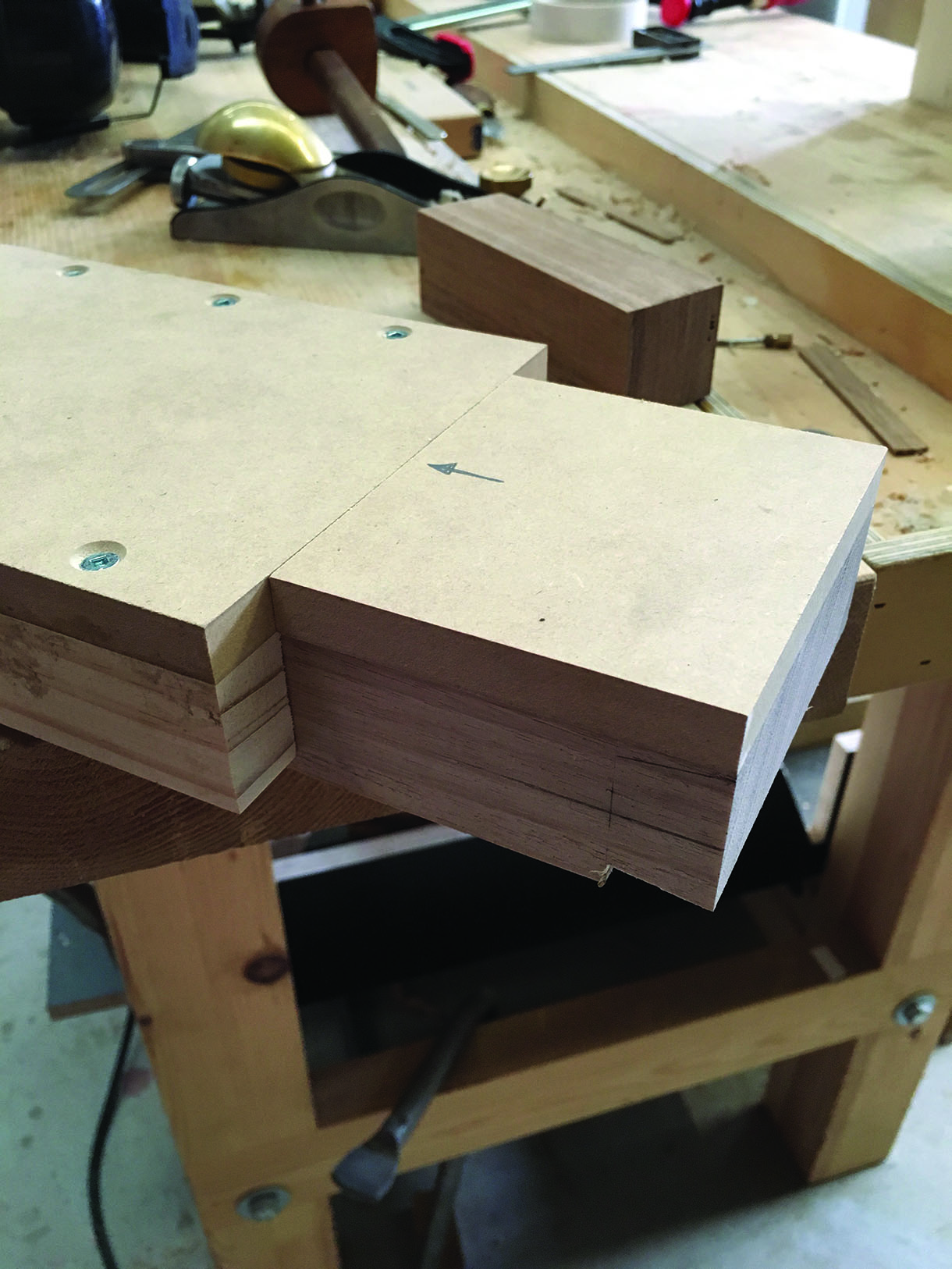 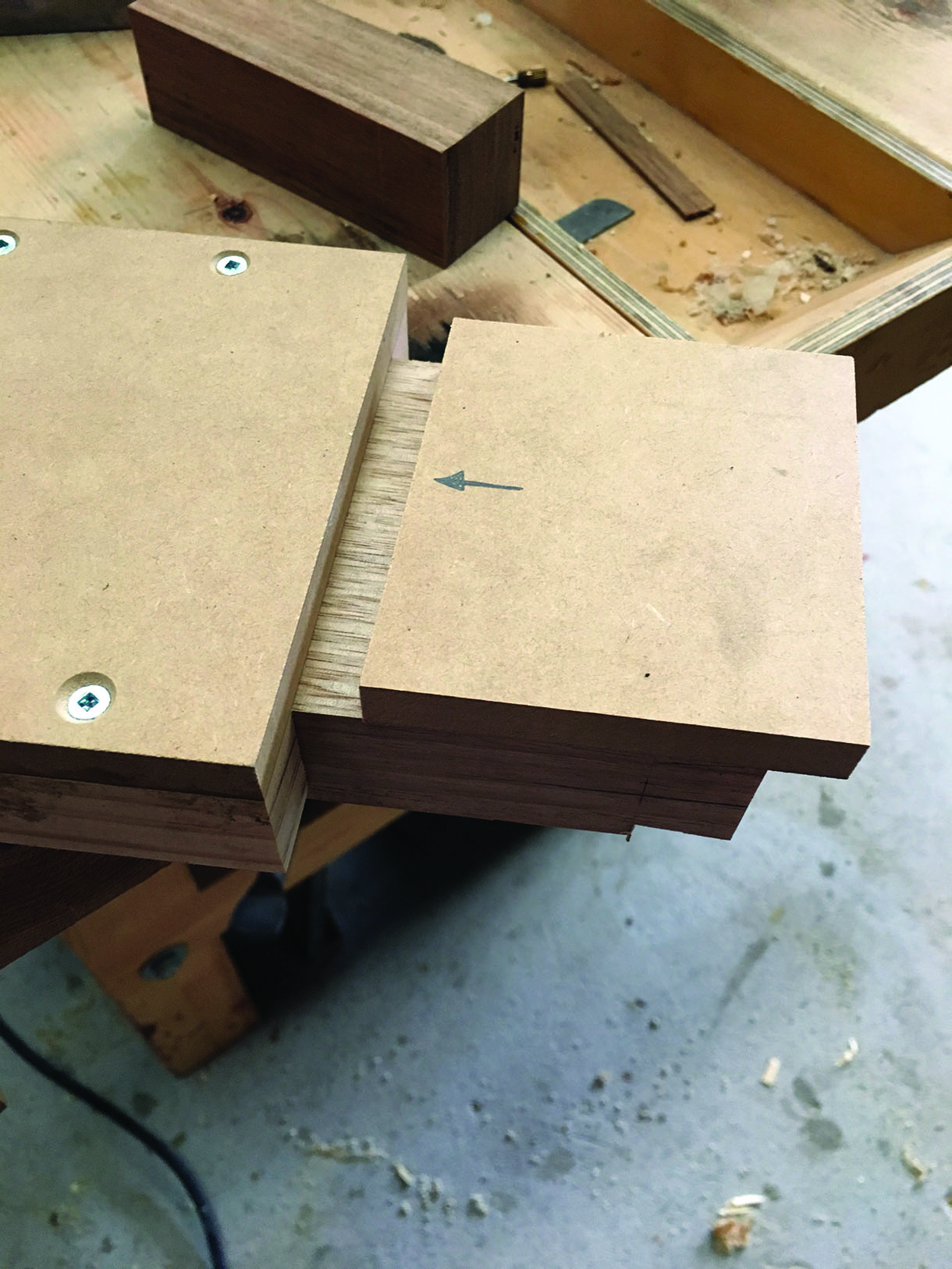 … used to set the fence spacing on the workpiece 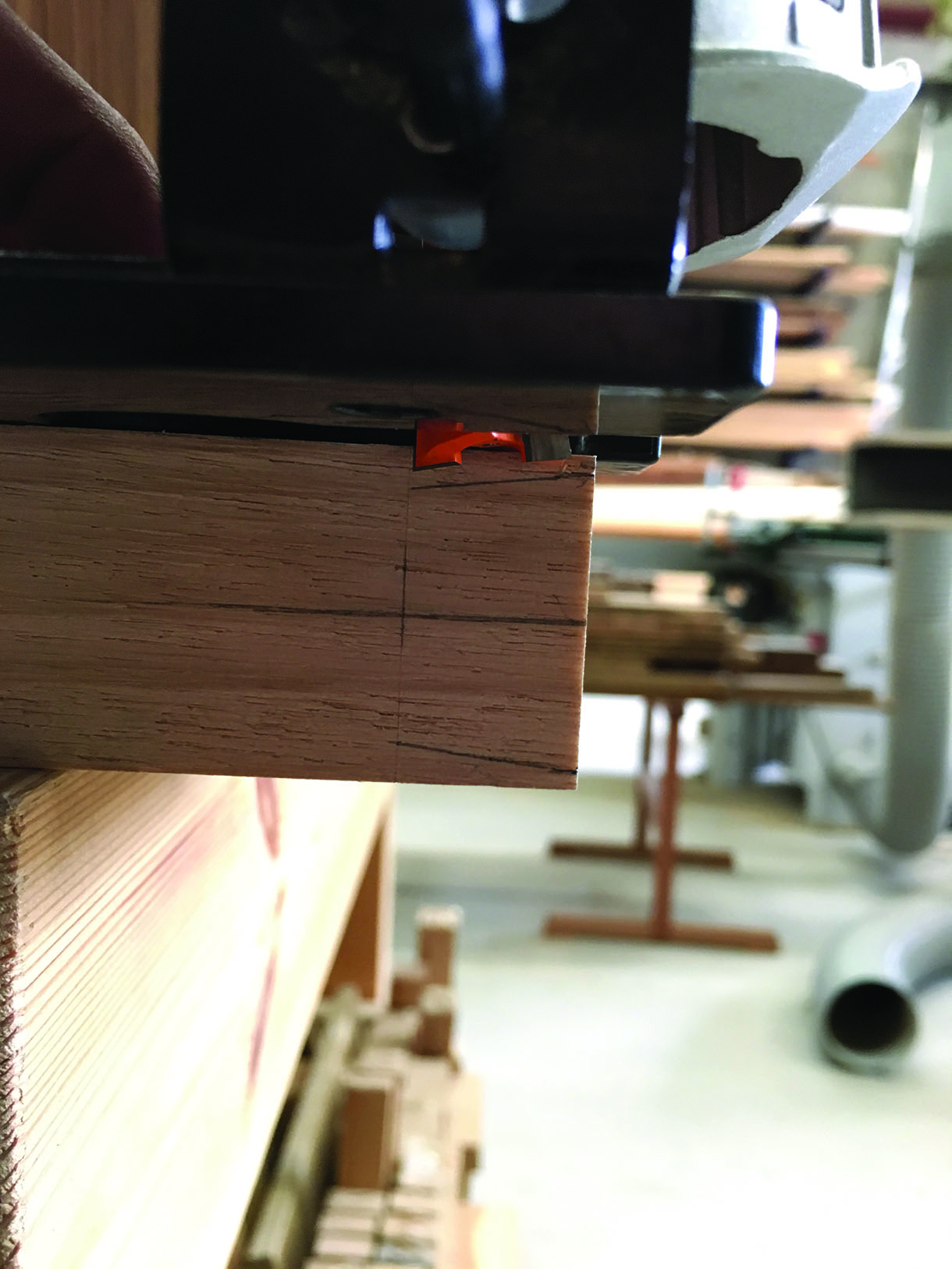 Marking out the joint can help with depth and fence alignment 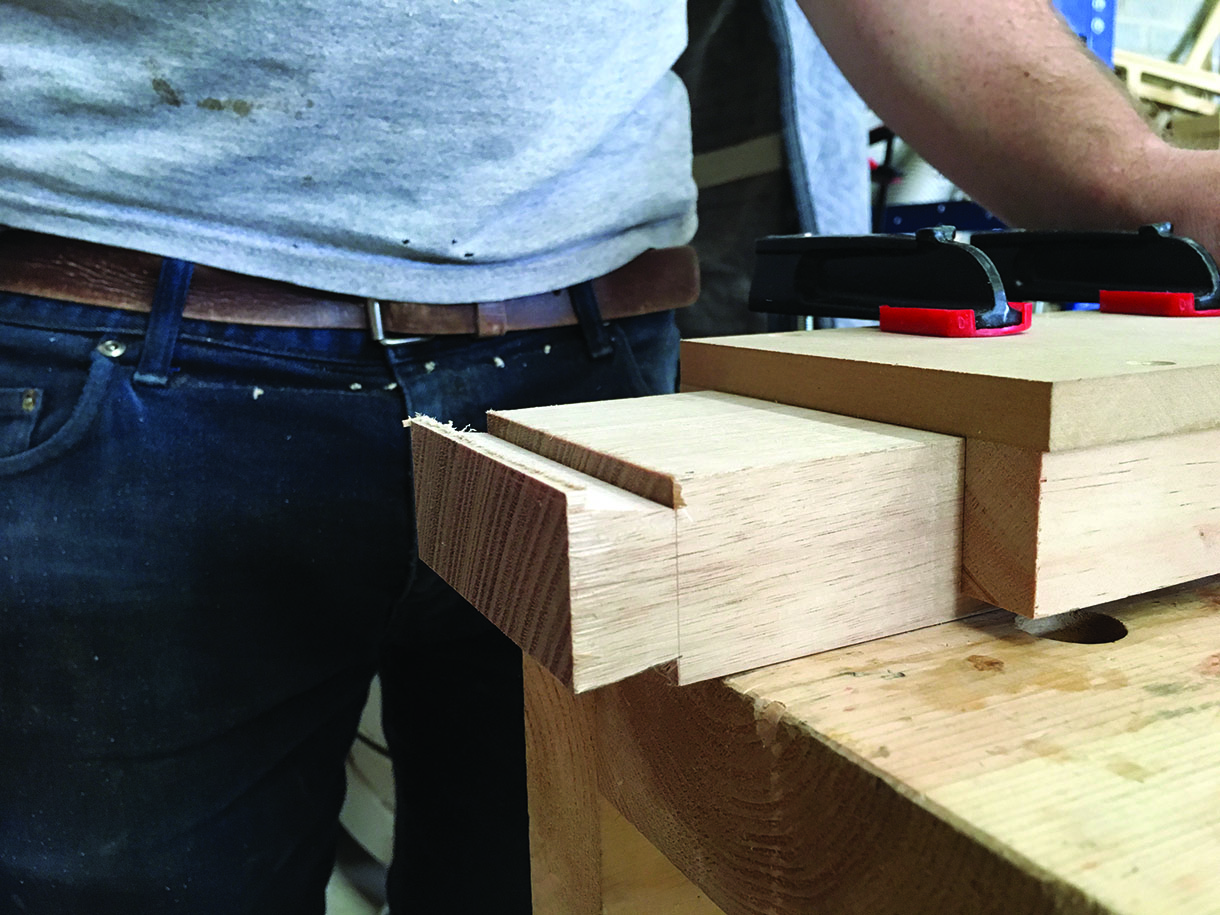 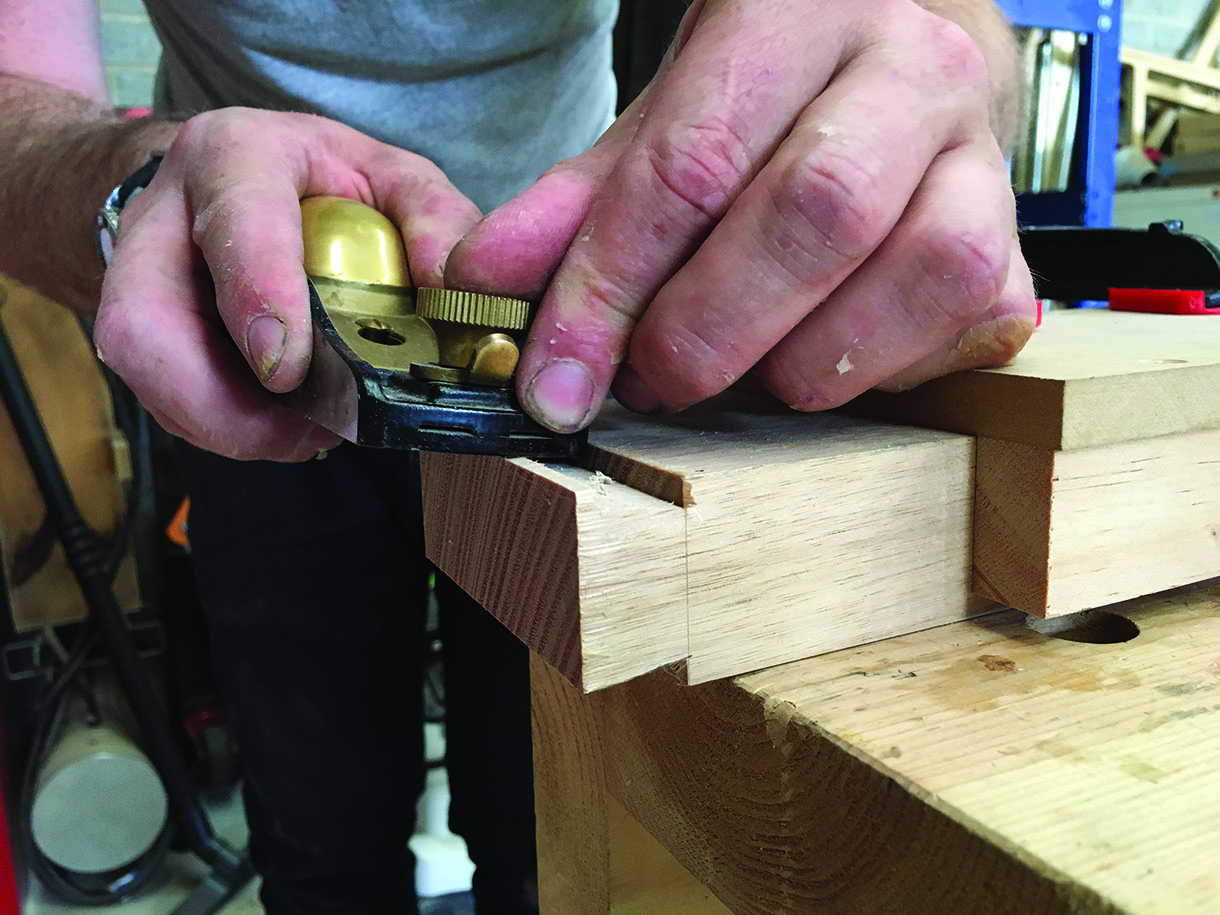 … which was easily cleaned up with a block plane 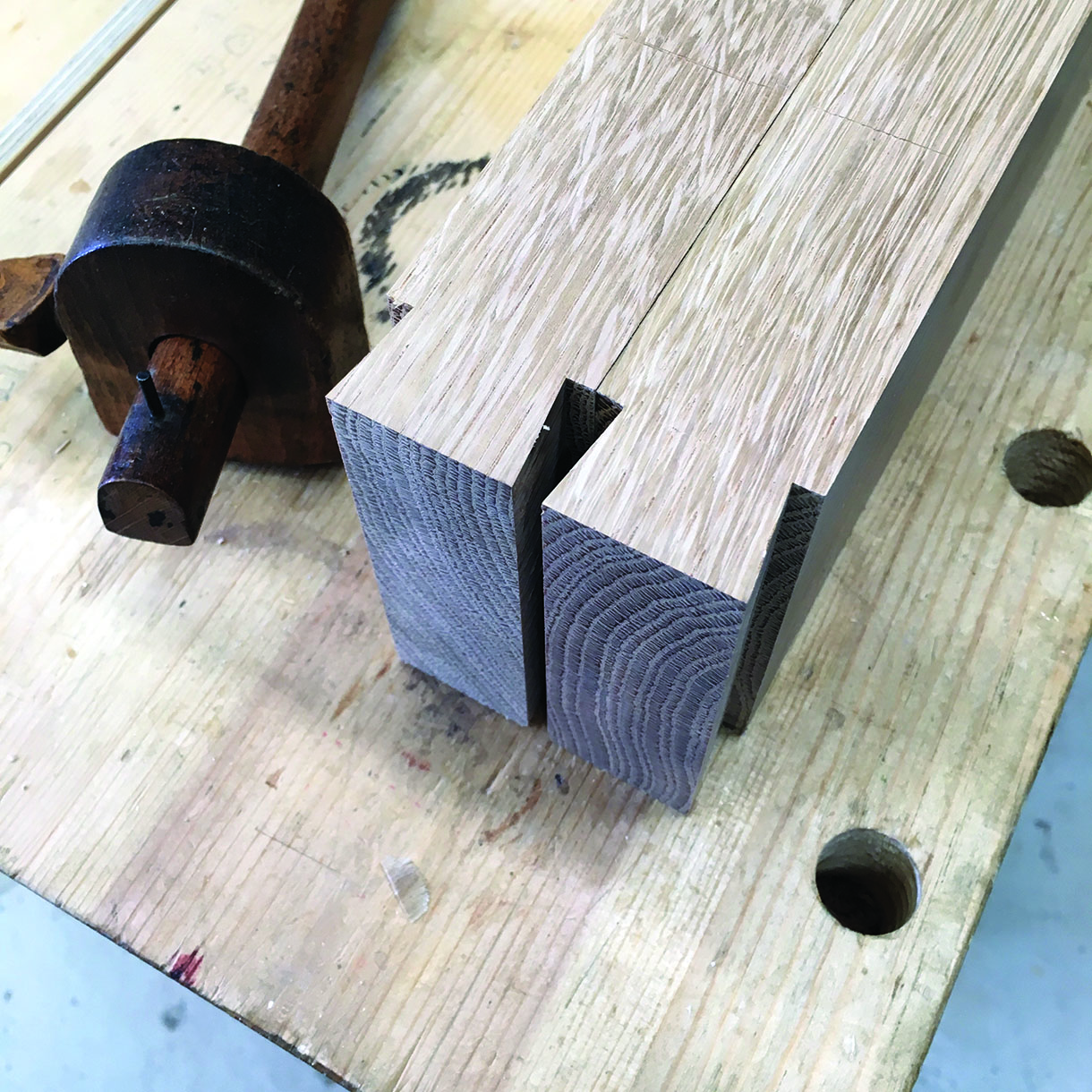 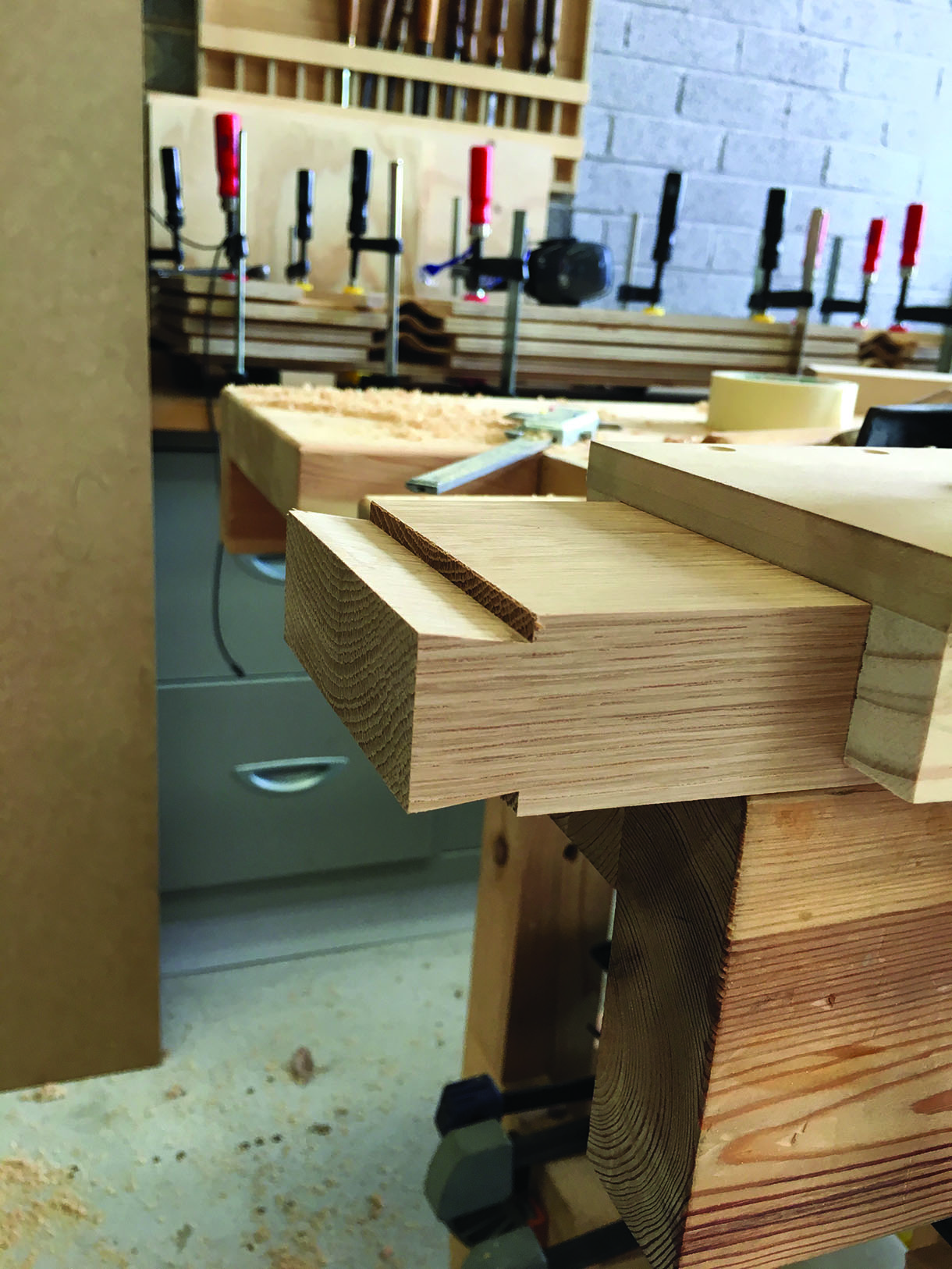 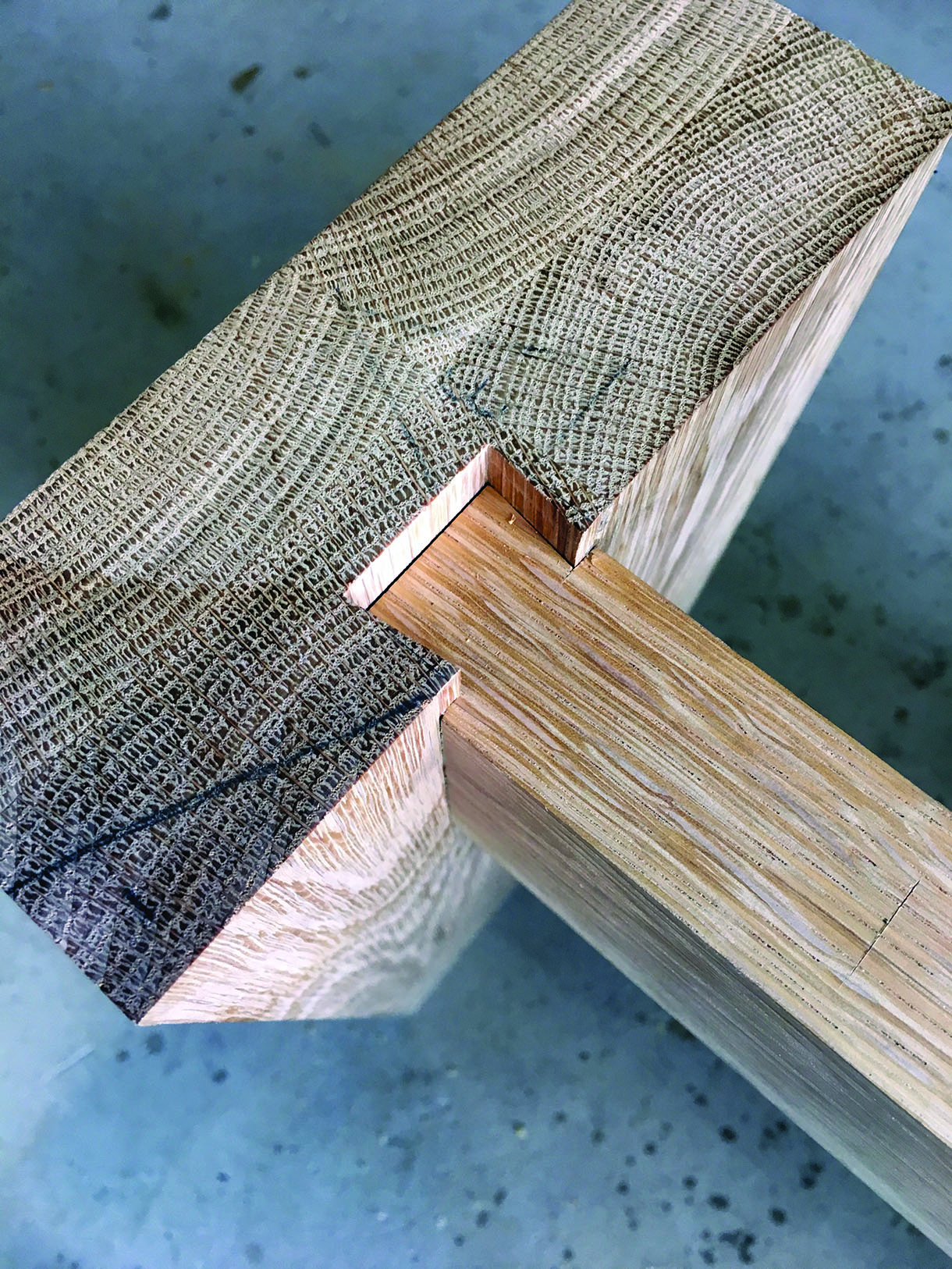 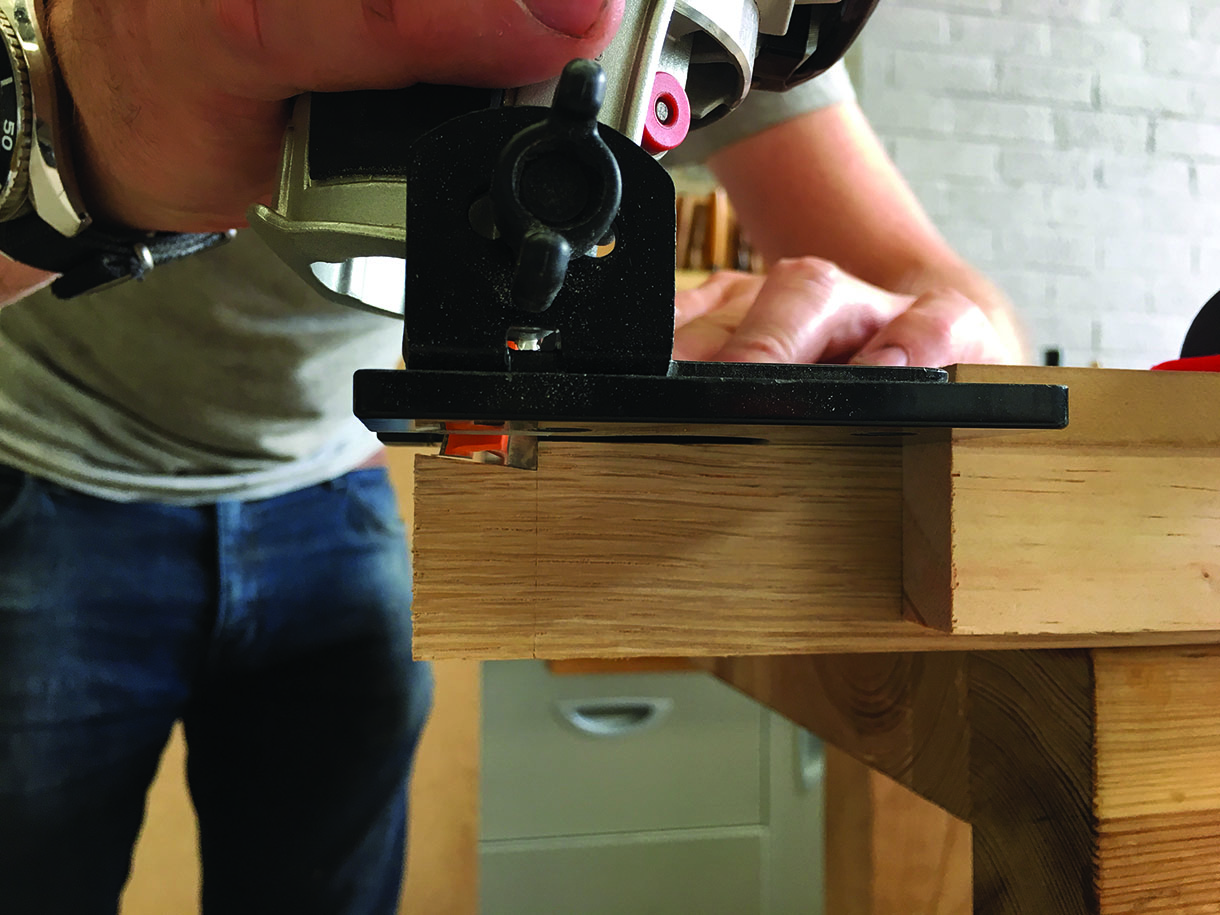 Tilting base angled to that over the dovetail cutter 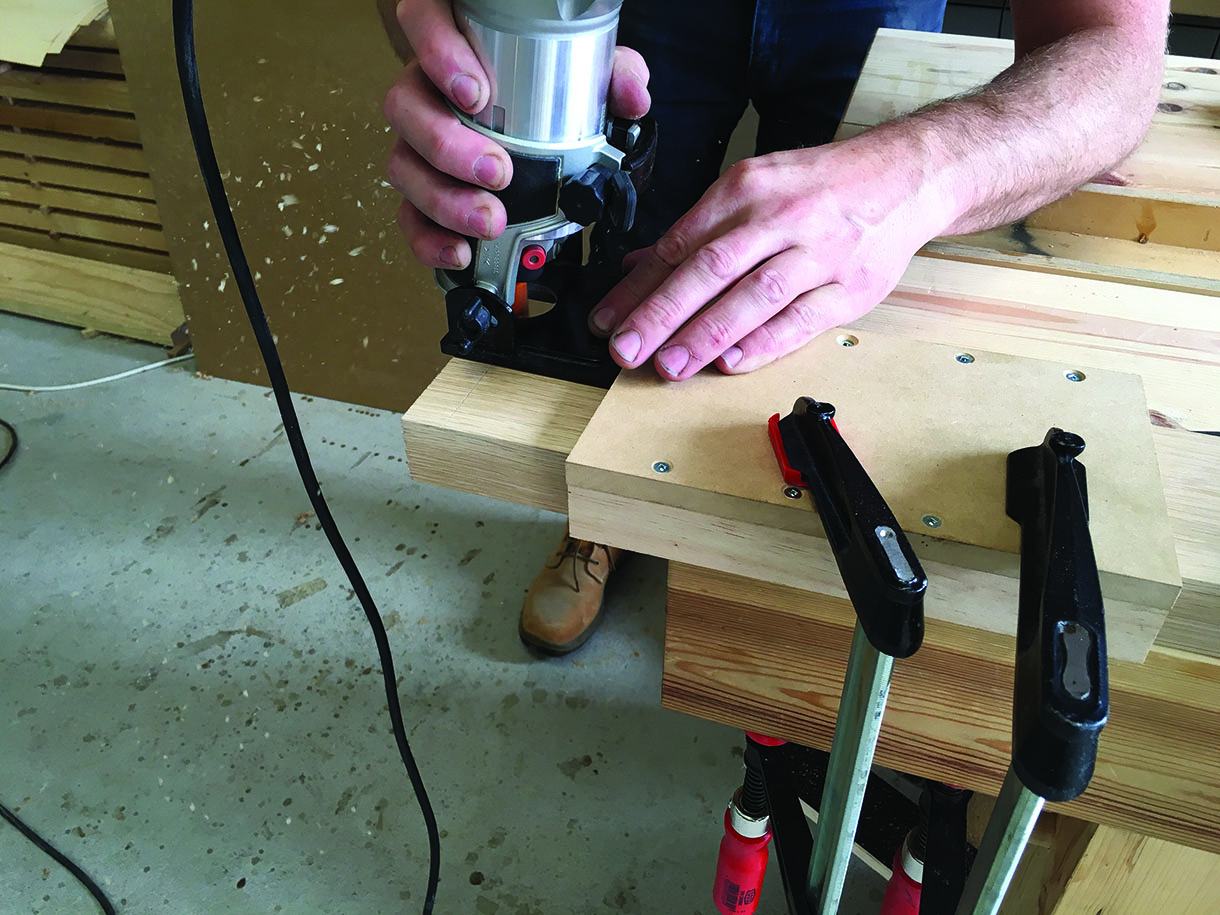 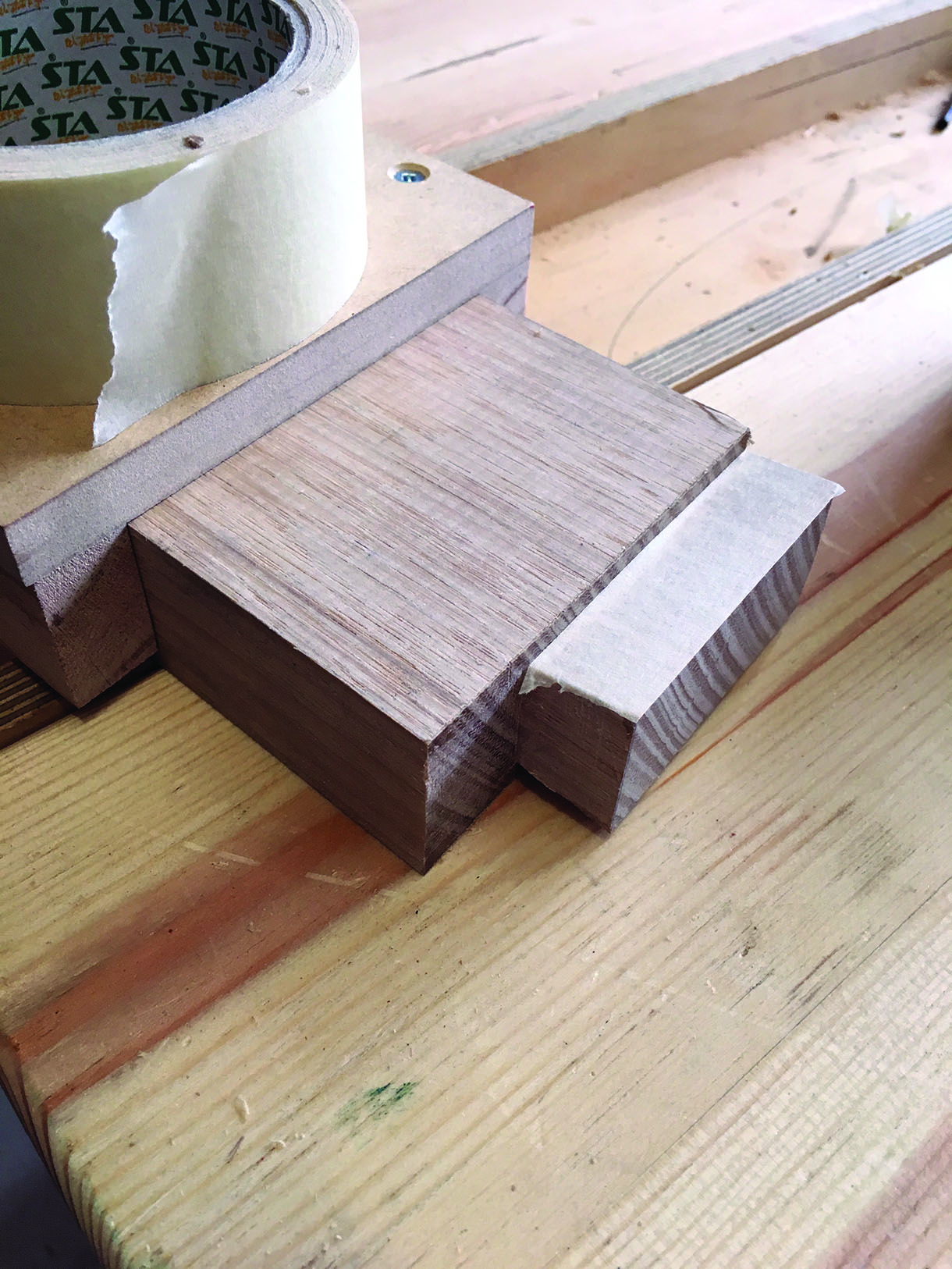 Digital angles – the future is here
When it came to doing the final setup for the sliding dovetail I double-checked the angle of the tilting base using my smartphone. The internal inclinometer in the iPhone is surprisingly accurate and can measure angles on two different planes. The app I used is called Clinometer and can be found in the App Store. Not only was it useful for double-checking the angle of the tilt router base but I have also used the same app to check compound angles on drill press jigs with great results. One tip for use on larger angled surfaces, especially for users of the iPhone 6 and 6s, is the camera lens protrudes 1mm from the back of the phone so a 3mm MDF spacer below the lens will ensure the inclinometer gives an accurate reading. 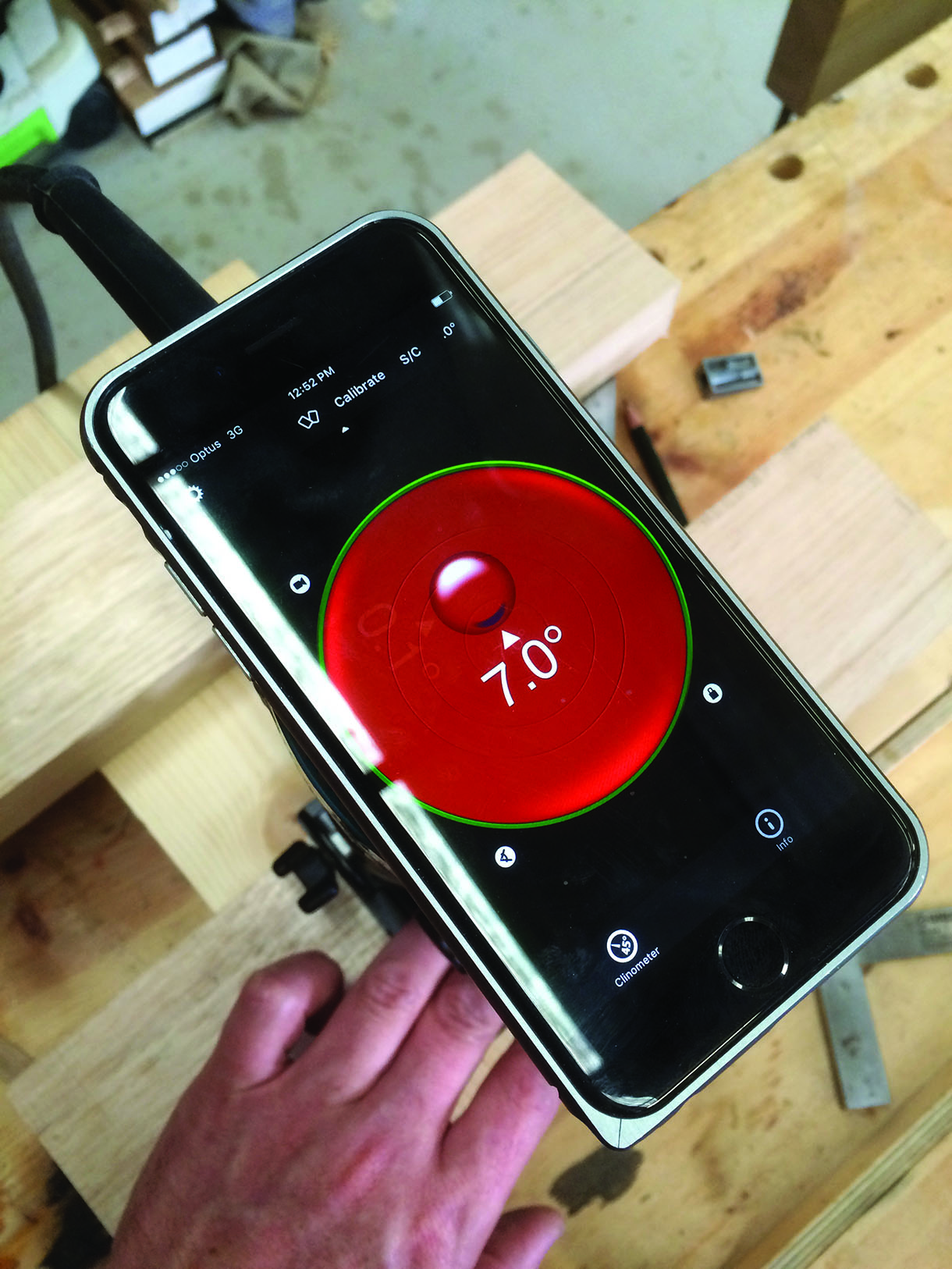