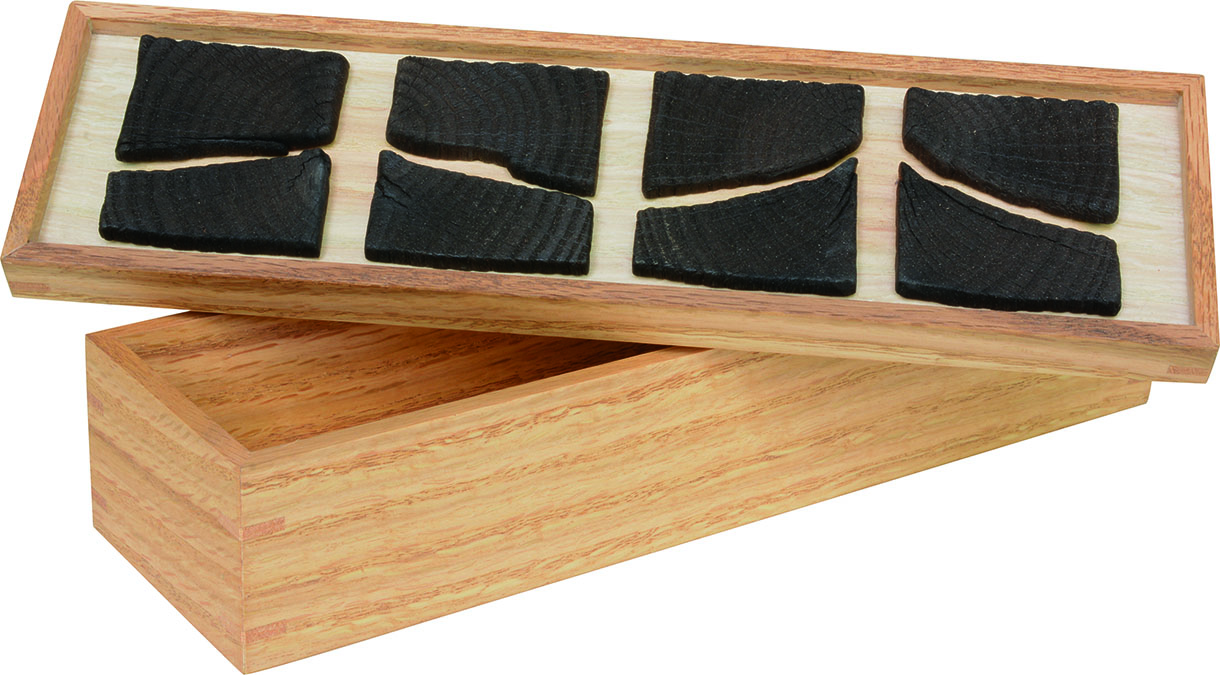 Andrew Potocnik makes a decorative box out of pallet wood

o often one encounters timber considered worthy of nothing better than firewood, but in the right hands and minds willing to investigate further and contribute significant time, a whole new future can be found for the timber, giving the final product a special meaning. Here is an example of where a waste product was converted into something well beyond its initial purpose; illustrating how the humble pallet can become an object that will live long beyond its original industrial intention.

Pallets have a very short lifespan. They are part of a one-way journey designed to provide a form of transportation for other products that enrich our lives from one part of the world to another. Once the journey is completed, they are too expensive to ship elsewhere, so are sent to the scrap heap, but they can yield a vast array of beautiful timbers – provided you have the time to expose them.

Where did the inspiration for this box arise? I am a member of the Victorian Woodworkers Association in Australia. Another member of the Association is passionate about converting waste timbers into high quality end products that celebrate inherent qualities of wood. His business would otherwise pulp the pallets into garden mulch… and they deal with thousands of cubic metres of waste wood per year! So he set a challenge for the Association; make whatever you wish from two pallets and then we have an exhibition!

Rising to the challenge, I opted to make a couple of boxes that could possibly celebrate the timber hidden within these pallets, seeing as many of them originate from the USA and are constructed of low grade maple, ash, pin oak, possibly laburnum and many other species still to be identified correctly, but I really wanted to highlight the most degraded and cracked timber as a feature on the
lid of this box. 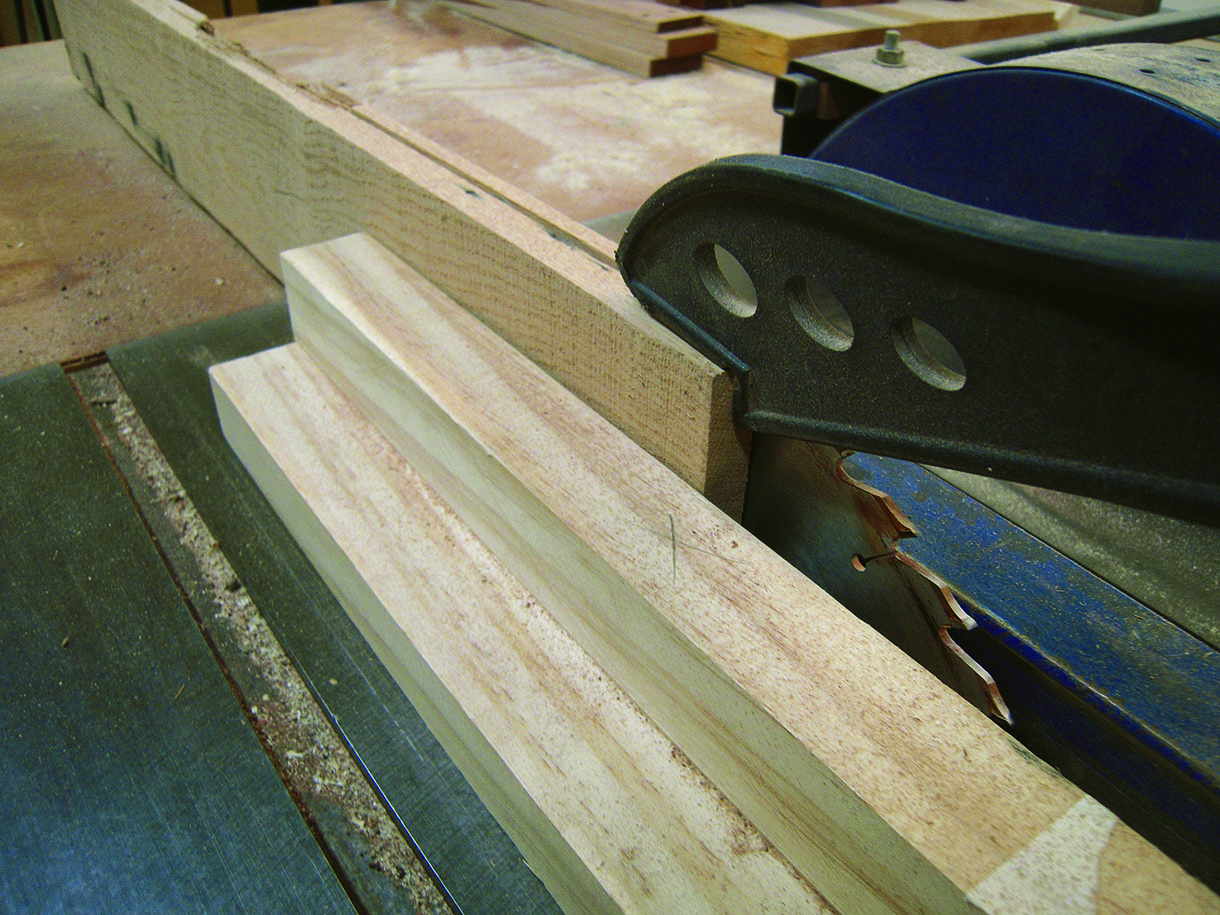 1.Once the pallet was dismantled, nails removed and dirt cleared with a wire-brush, I could begin to ‘rip’ timber to about 8mm thickness on a table saw and then put it aside for a few weeks to stabilise. It’s wise to stack boards and add ‘stickers’ (i.e. spacers) between individual boards to allow air to circulate. This ensures that they adjust to local air moisture content, but it’s also a good idea to add weights on top of the stack to reduce possible warping of boards as they stabilise. Wood loves to move, which can be the bane of woodworkers and controlling distortion as it dries can be a nightmare, depending on location. So, as this wood hadn’t been kiln dried, there was a likelihood it would move, so I put it aside to settle 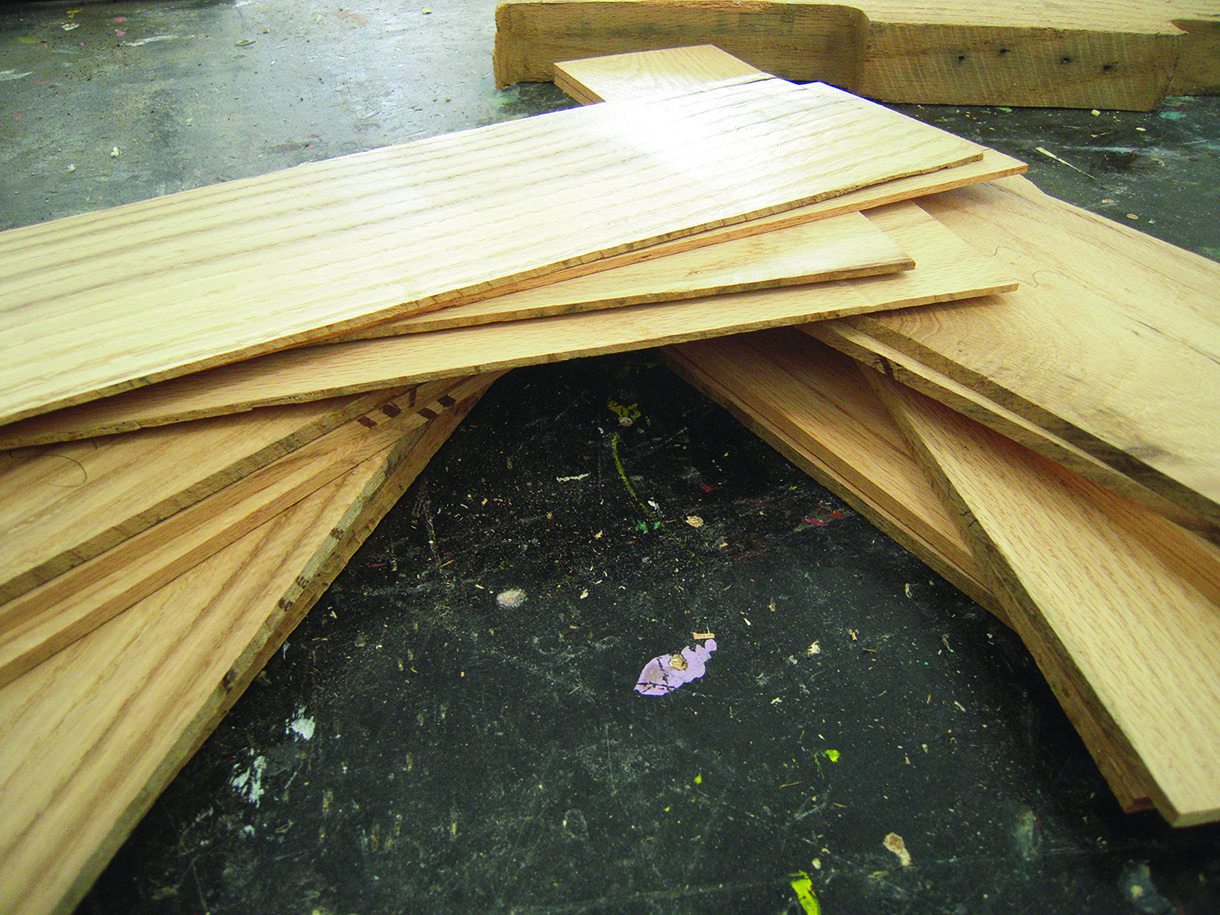 2. Some weeks later the boards were thicknessed to about 5–6mm with  the expectation that wood movement had settled (fingers crossed!). Each board could now be assessed for grain pattern and location in the box. Keep in mind, there were cracks that developed in the drying process and imperfections that I hadn’t picked up before 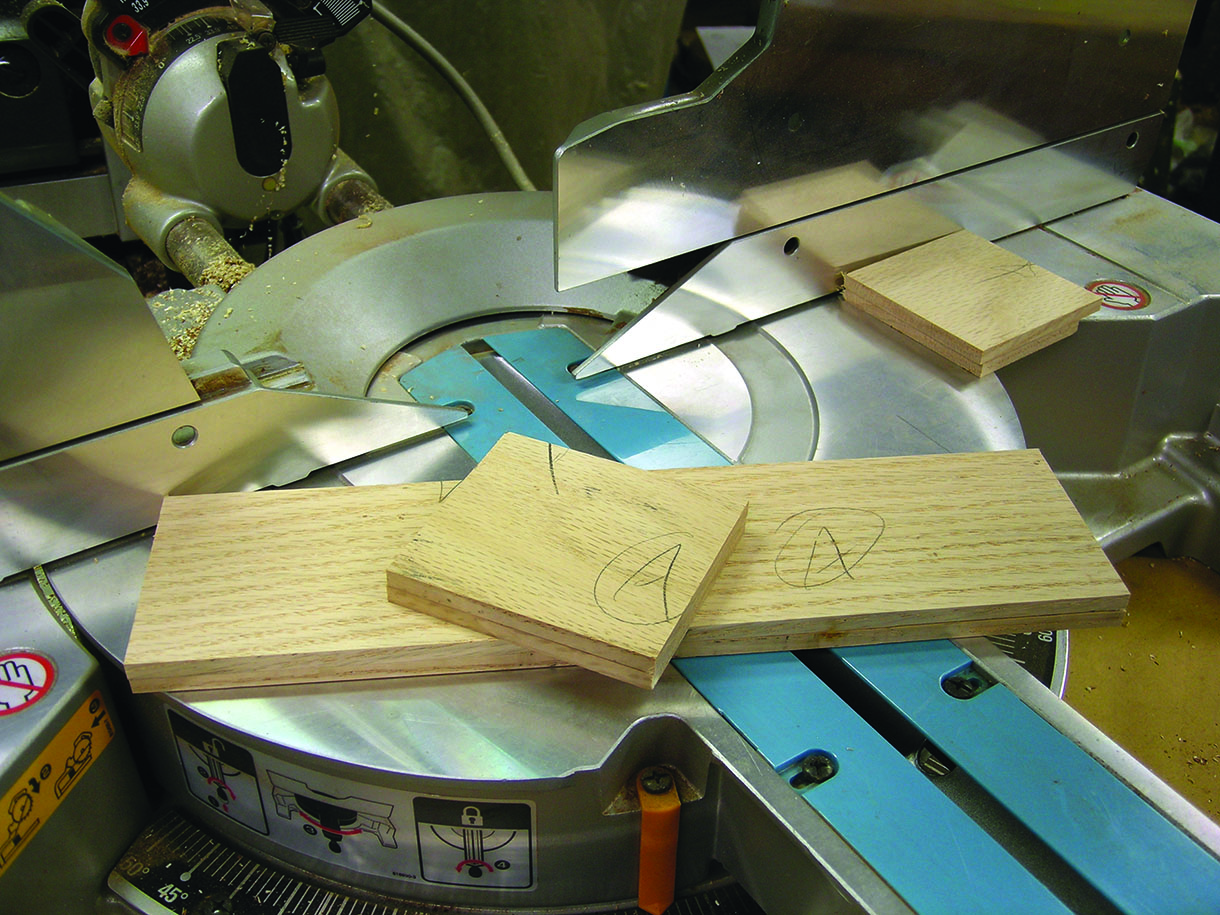 3. The material could now be cut to 70mm width on a table saw and reduced to appropriate lengths on a drop saw. Keeping in mind that my initial intention was to fit cracked end grain pieces of this wood to the lid, all measurements were based on the inserts, so I was now faced with a situation where I had to think backwards from how big each insert would be and how much open space I thought was needed to ‘frame’ the inserts within the overall box lid. Difficult to explain, even more difficult to work out in the making! 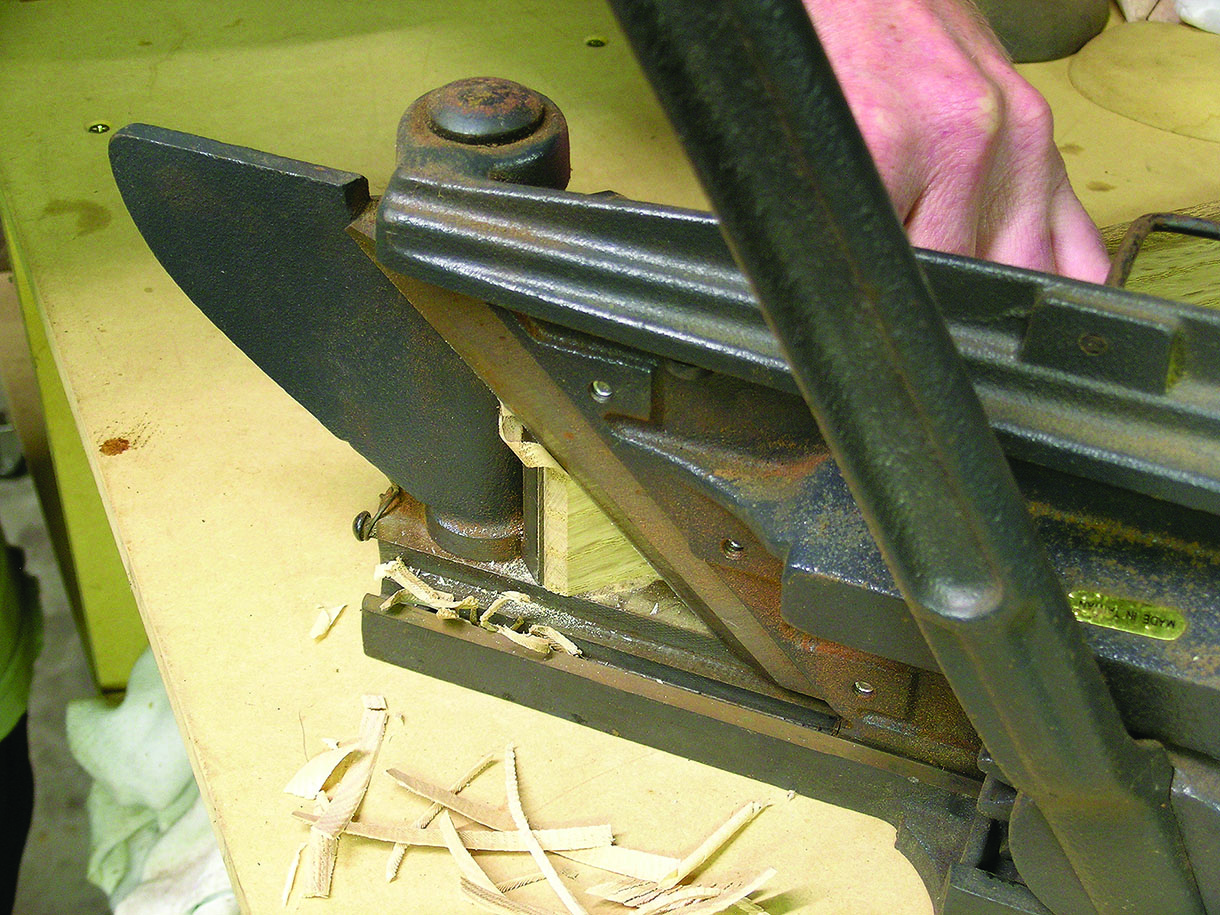 4. Once sizes were established and the sides and ends cut to size, I moved to a guillotine to carefully slice away waste to form cleanly cut mitre joints. So far, this has been the most accurate method I’ve found, providing material isn’t too wide for the guillotine to handle. Alternatively, you could cut mitres on a chopsaw or even a table saw. For purists, you could hand cut and shoot joints, providing you have the skills 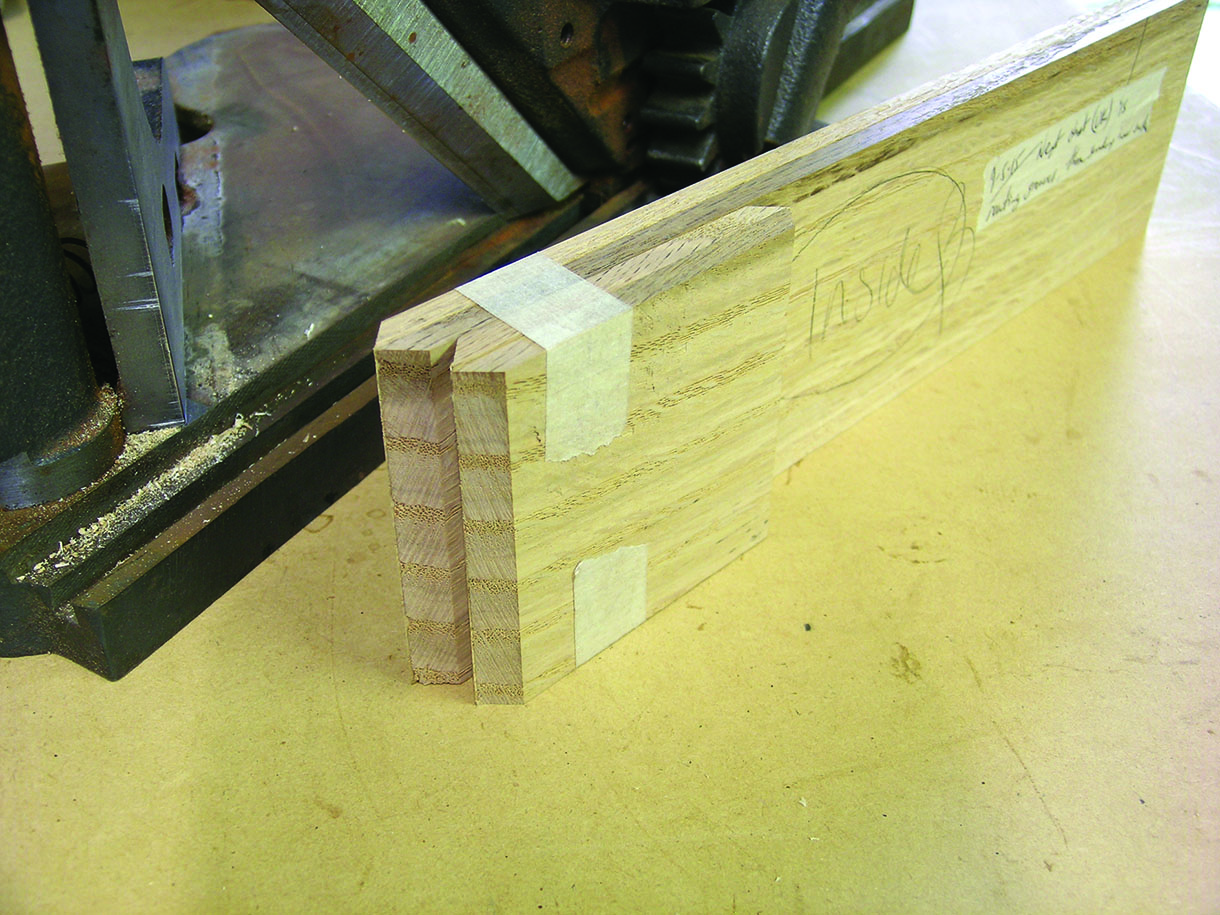 5. Then, all components were cut to correct angles and taped together, ready for the next stage of production 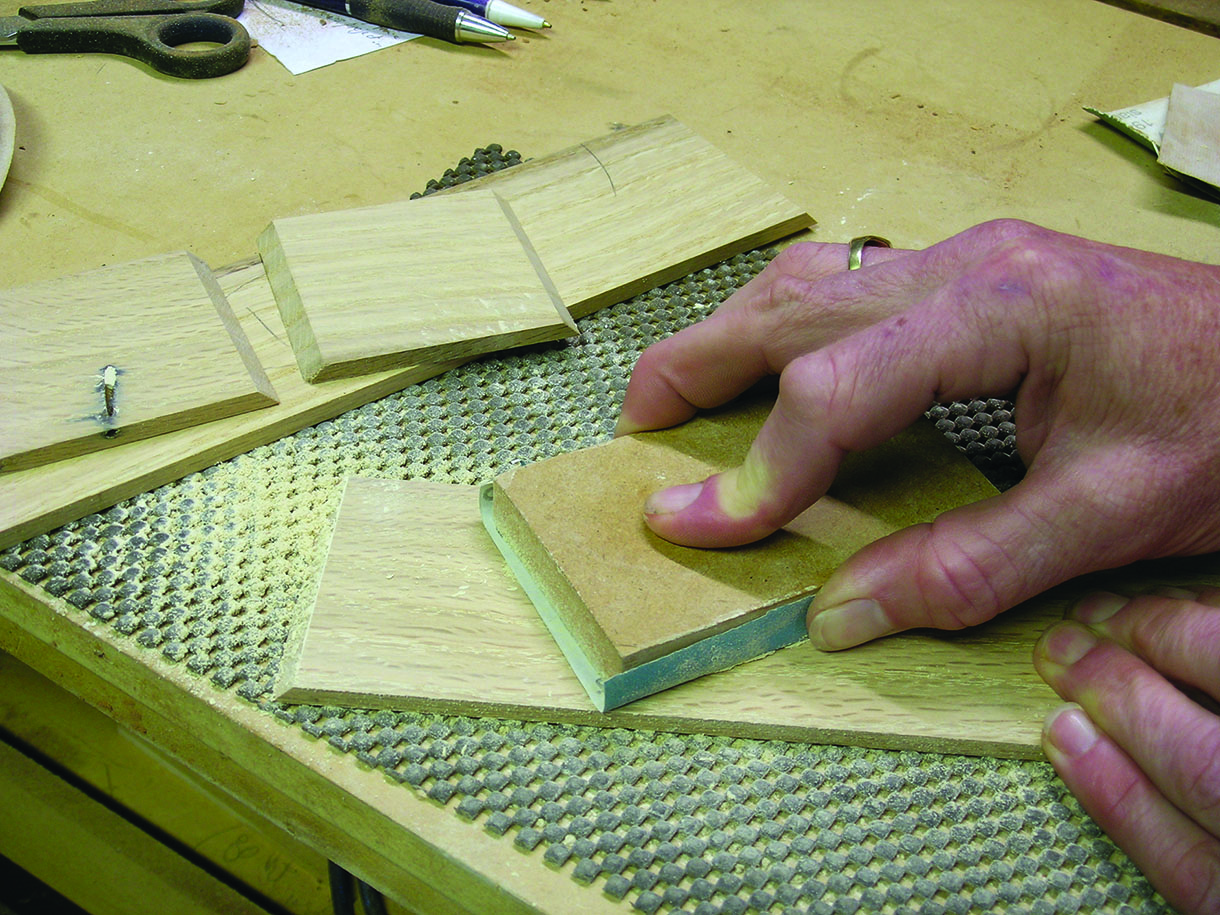 6. I like to sand all interior surfaces completely before assembly, so each inner face was hand sanded through to 320 grit 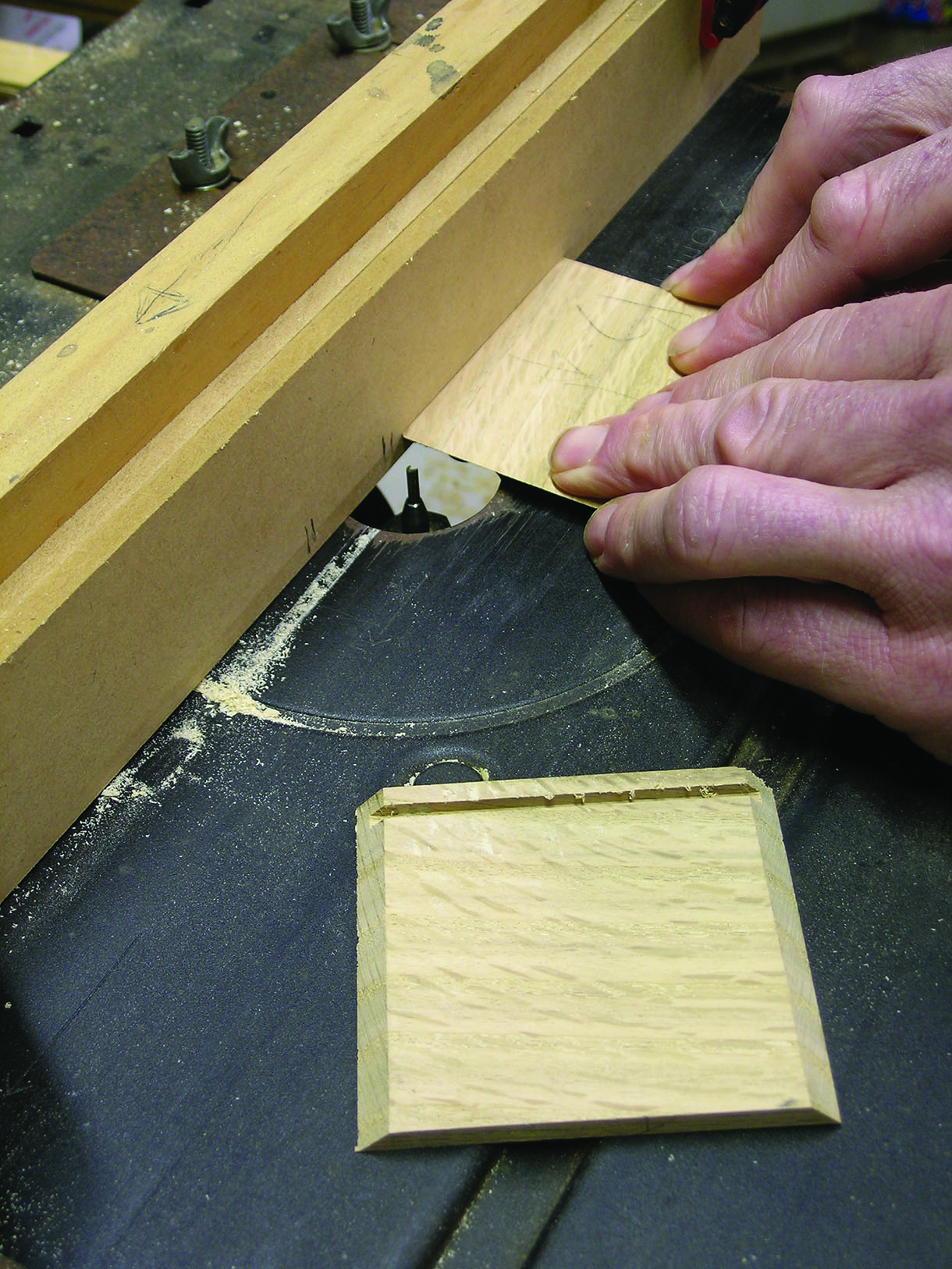 7. A 3mm cutter fitted to a router on a router table was used to cut slots about 5mm in from each edge
for the top and base of the box to fit into. Generally known as ‘floating panels’, this method of fitting allows wood to expand and contract across the grain and not force joints to fail, all going well! 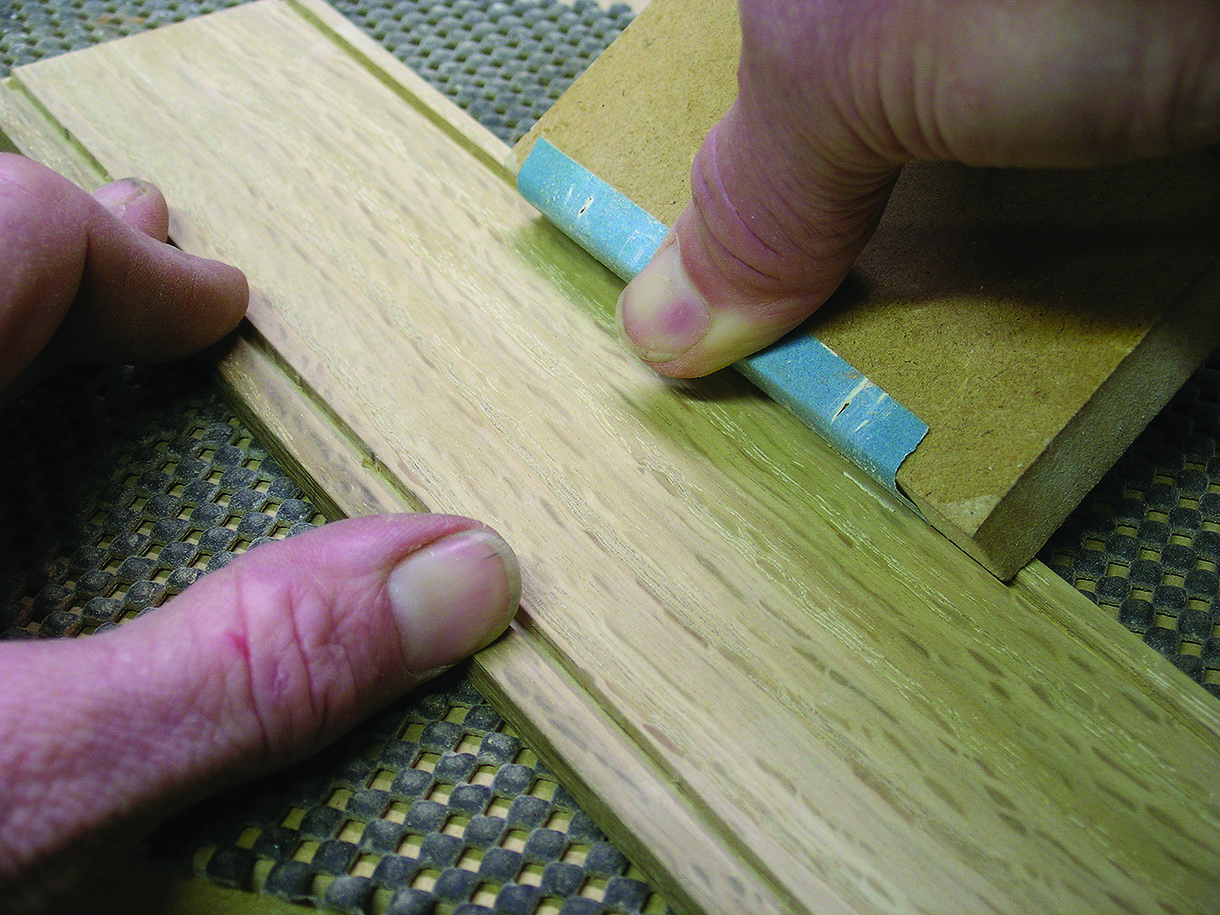 8. I like to ‘ease’ edges and get rid of possible tear-out resulting from the routing process using sandpaper and a sanding block. In the long run, it makes assembly smoother later on as it’s easier to fit the top and base into a chamfered groove 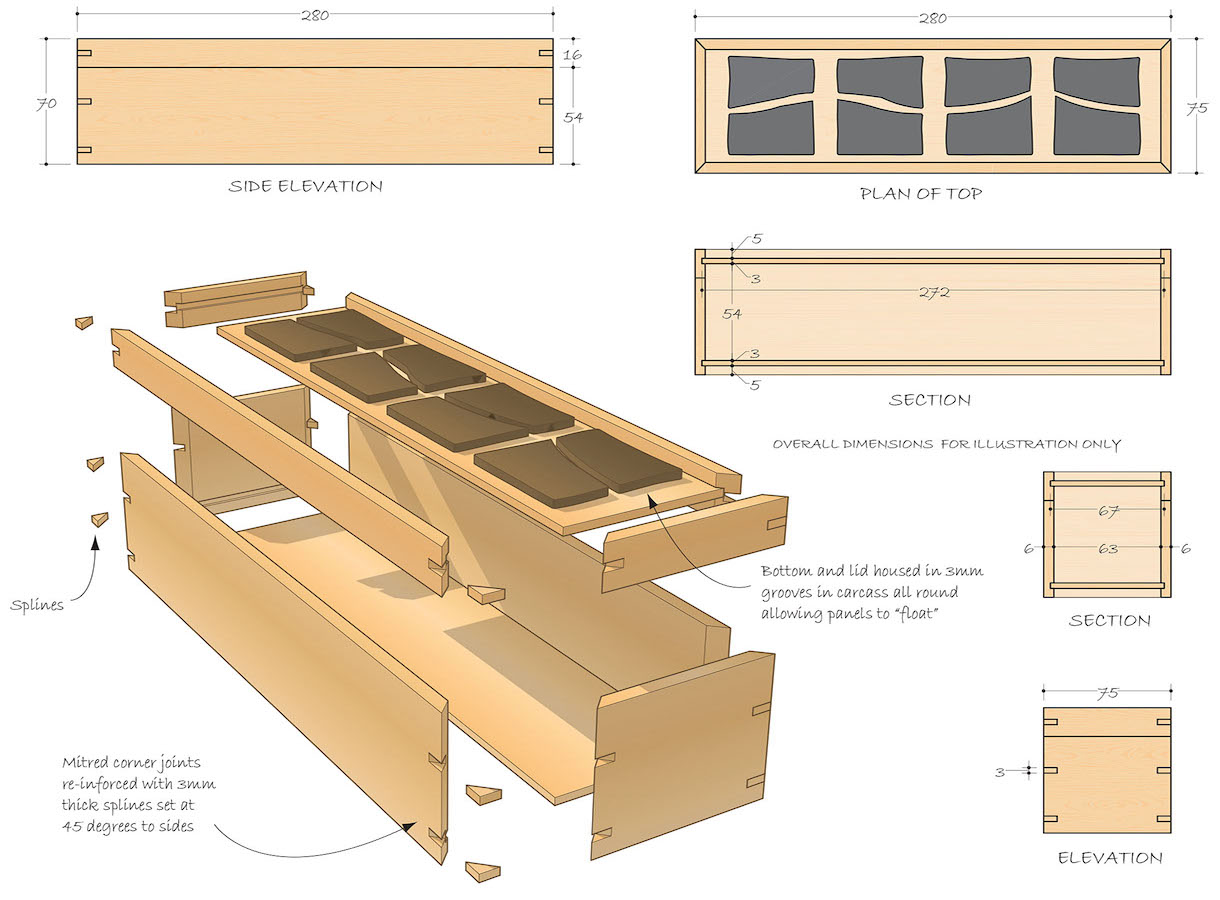 Box lid and base 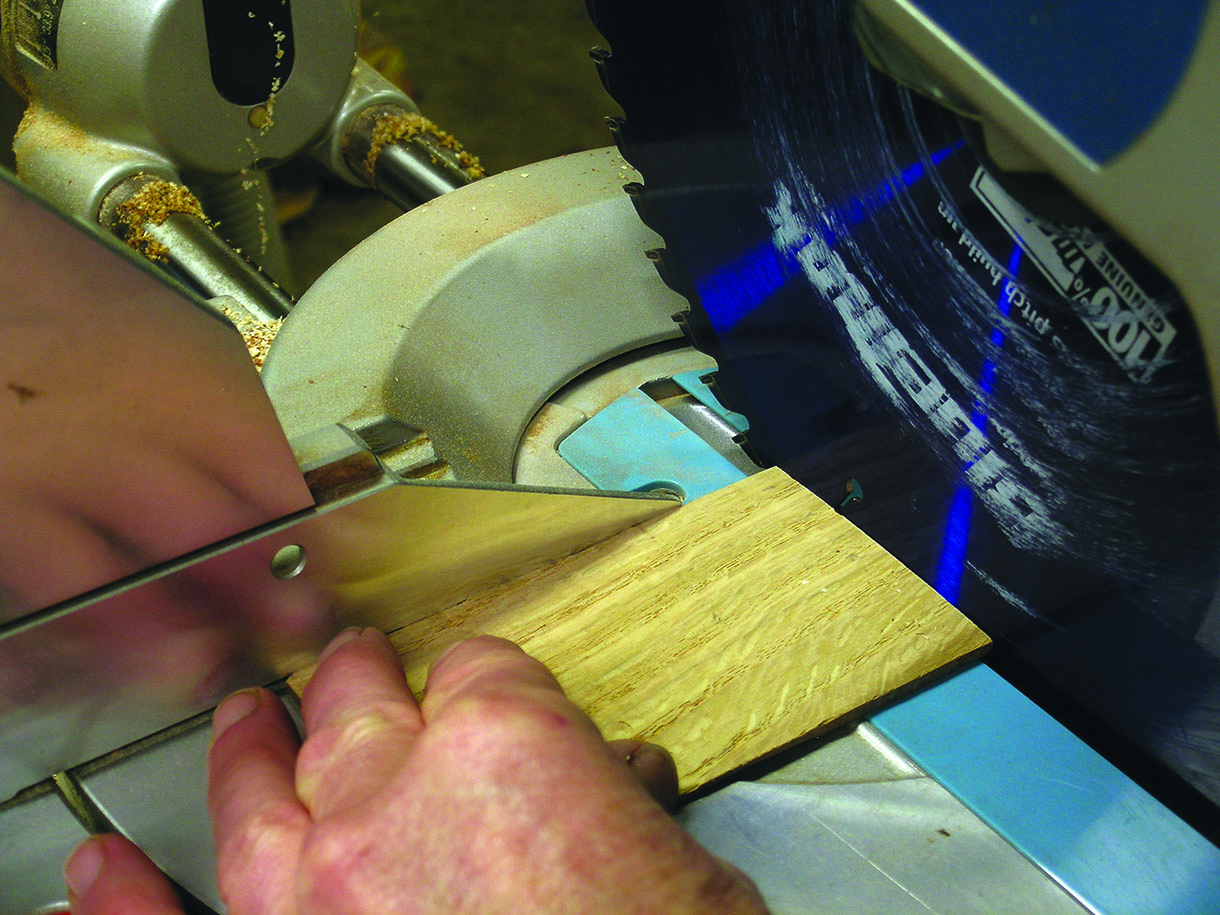 9. The box lid and base were cut to size on a chopsaw, ensuring all components would fit together accurately and still allowing the joints to meet neatly and the top and base to sit in place. It is wise to allow a little space for expansion and contraction of the two parts, so make them a whisker narrower than the space they fit into 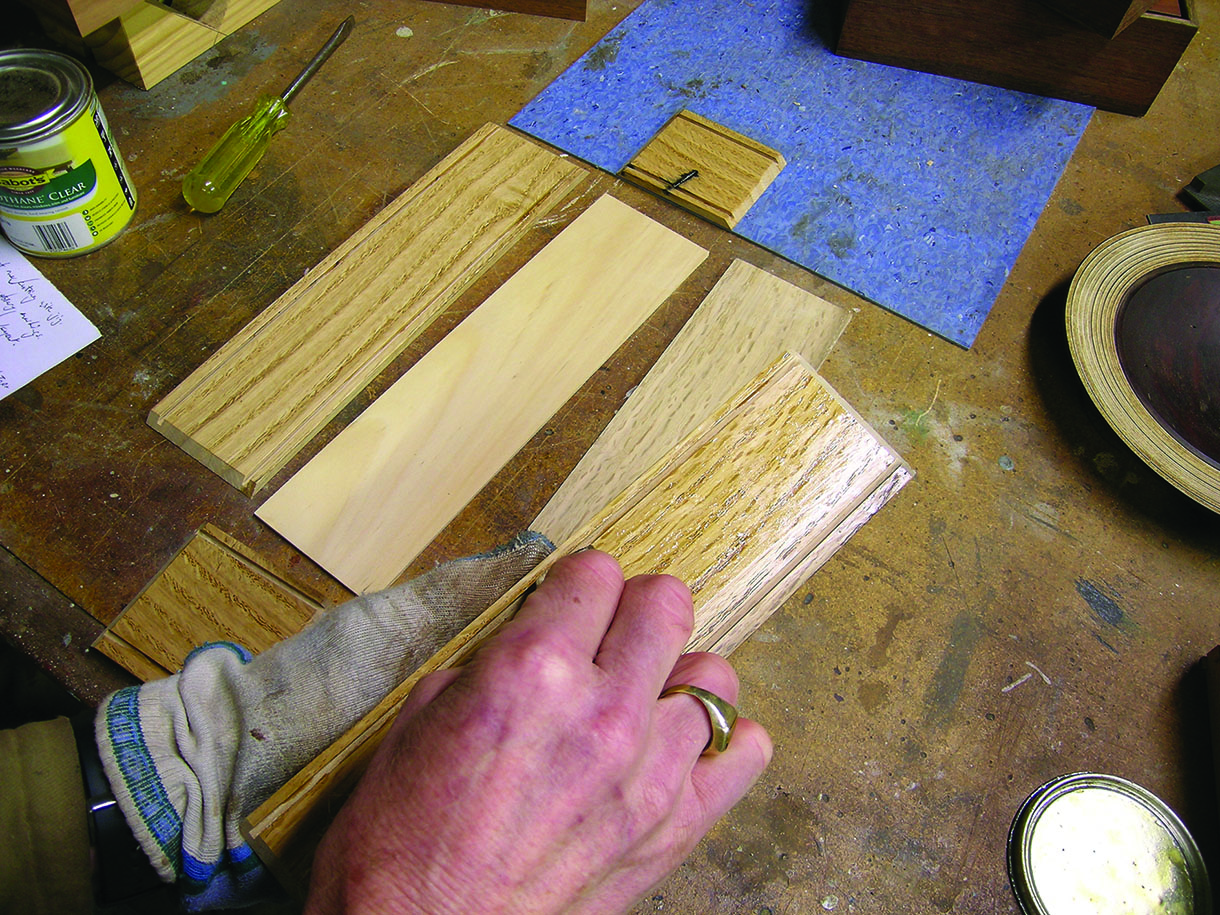 10. I like to pre-finish all of the components prior to assembly, so a wipe on/wipe off application of polyurethane was used with care, so the finish didn’t stray onto surfaces soon to be glued 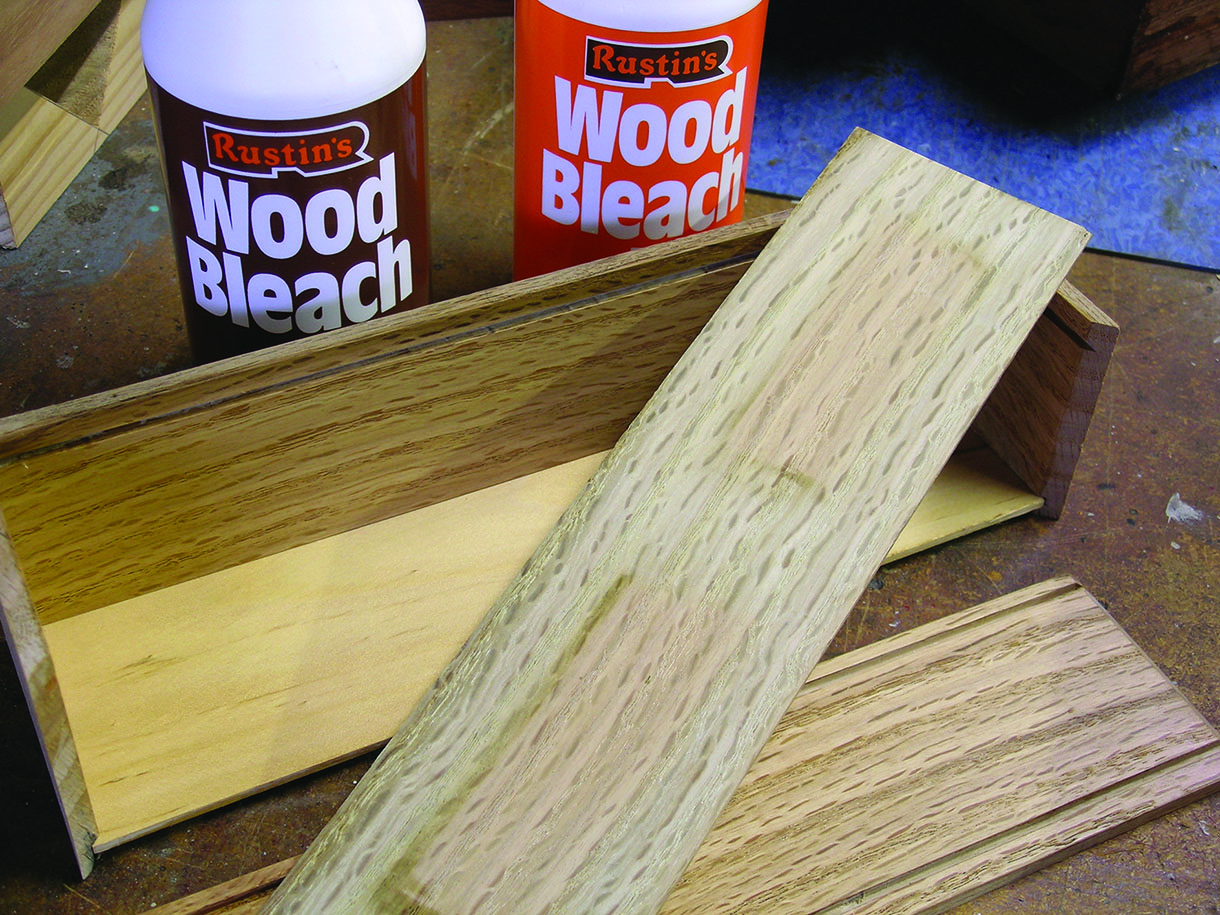 11. Intending the lid to be a feature of this box I chose to bleach the top prior to assembly, but pre-finished the underside with polyurethane. Bleached white wood would form a neutral background that I hoped would highlight the end-grain burnt feature pieces 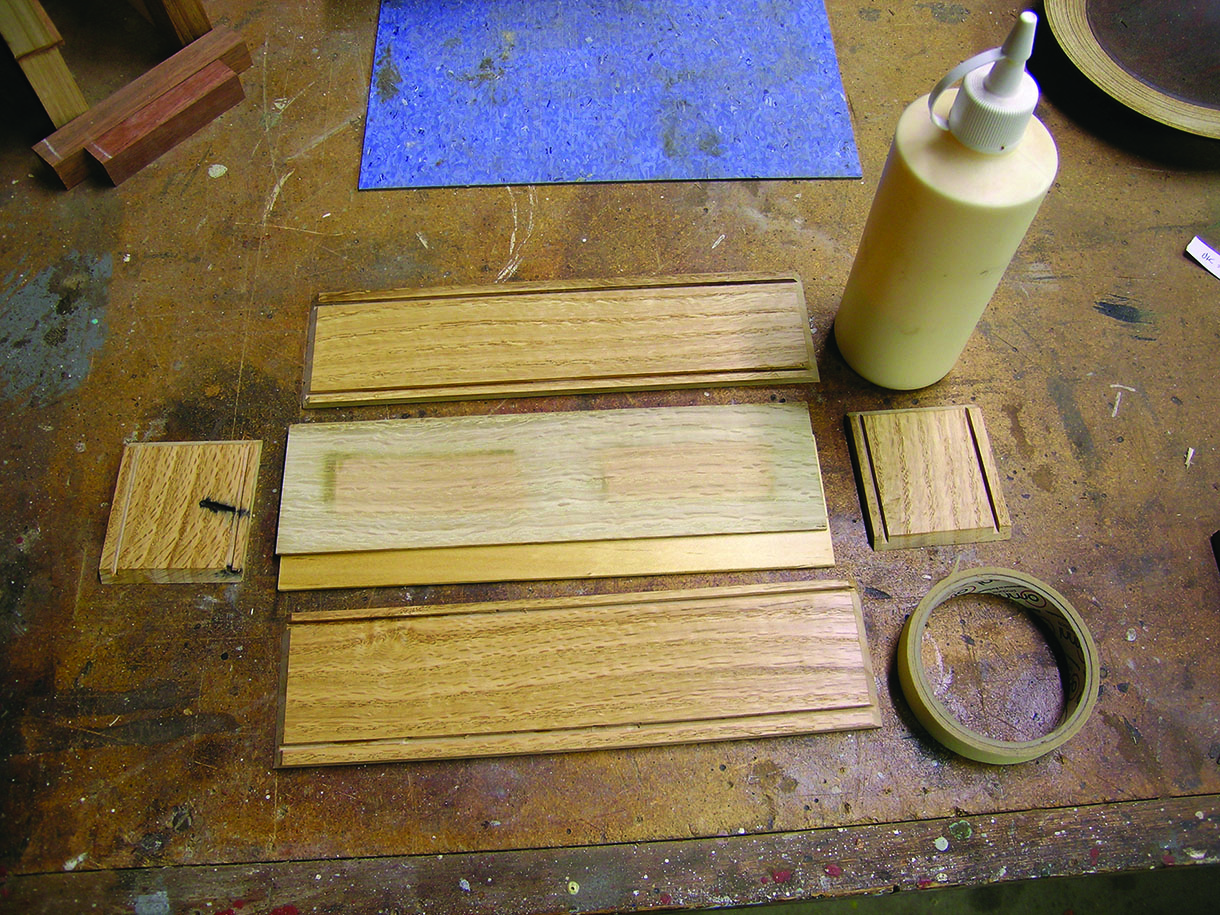 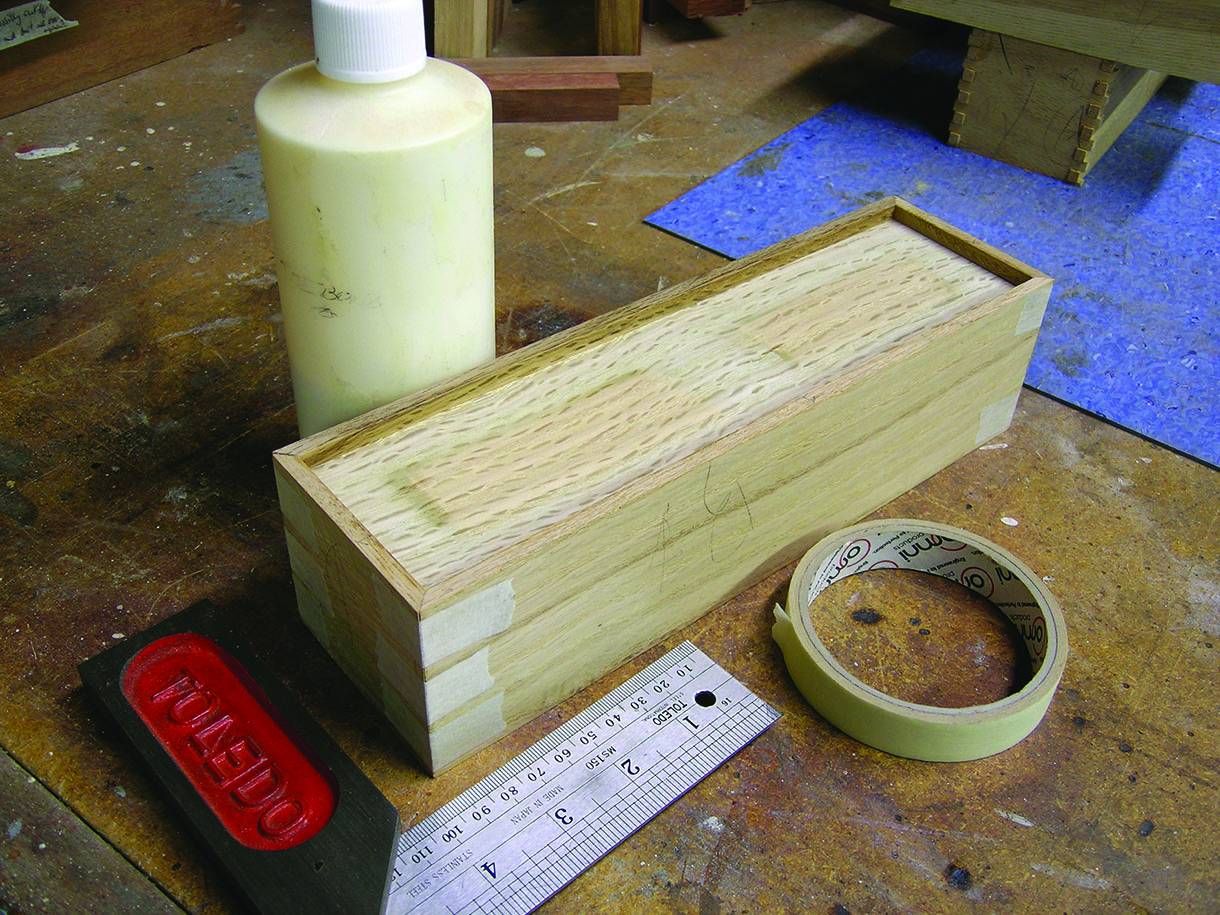 13. With glue neatly applied to surfaces of the joints and all components slipped into place (don’t forget I did a ‘dry’ trial to be sure before) masking tape was applied to all mating surfaces to ensure all of them met neatly and the box was ‘square’ 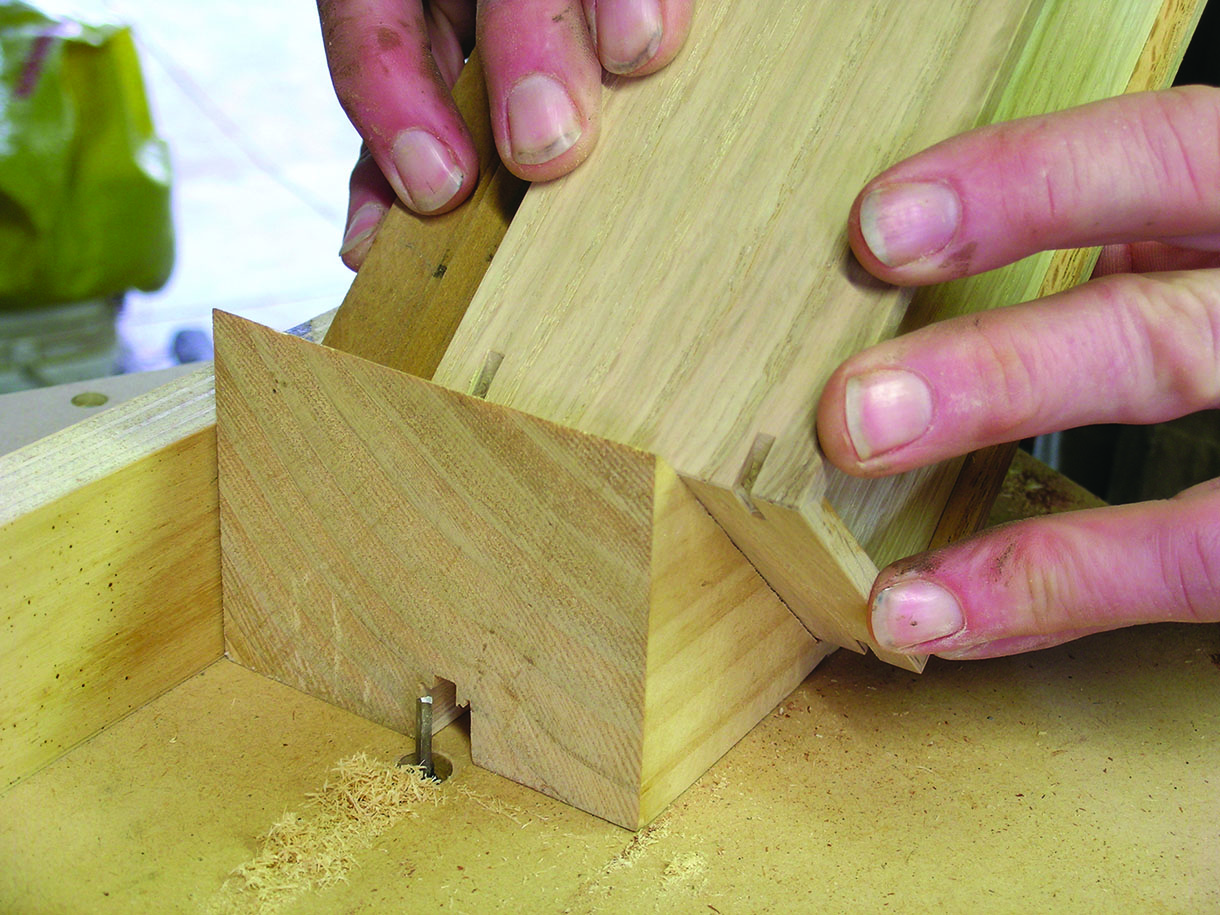 14. Once the glue had set it was time to cut slots for splines, which would add strength to each joint. Keen to make this process time efficient, I set up a small laminate trimmer on a very reduced version of a router table, and with the aid of a carrier cut a series of 3mm slots at 45° through each of the corners. To make the process as quick as possible, I used a series of 3mm MDF packers between the fence and box to alter where the slots were cut 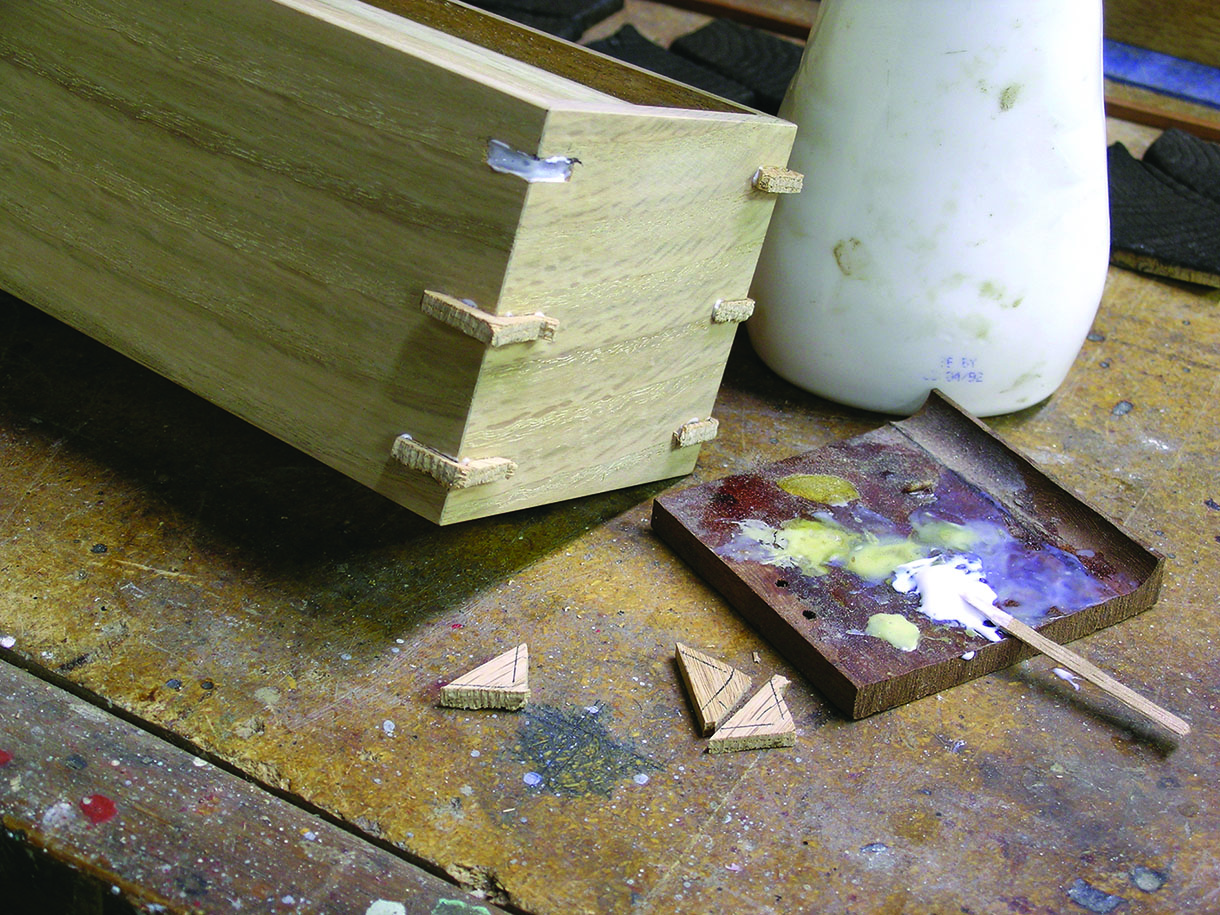 15. The timber was thicknessed to 3mm, then cut and glued into place to reinforce each joint. A small piece of veneer helped spread glue throughout each joint 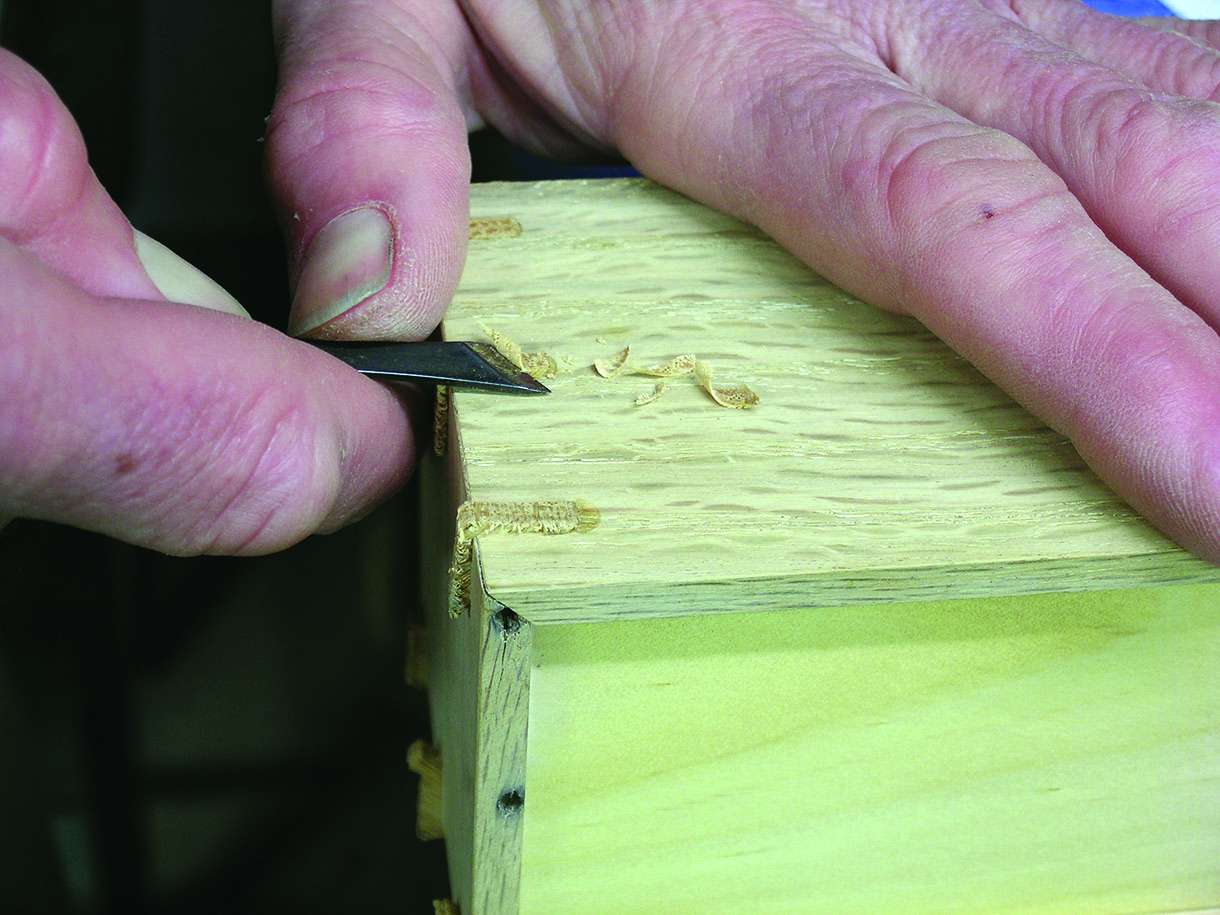 16. Once dry, excess timber was trimmed down with a skewed carving tool, but I later worked out a more efficient way of trimming these, using… well that’s another story. All excess splines were then sanded flat and level on a sanding board 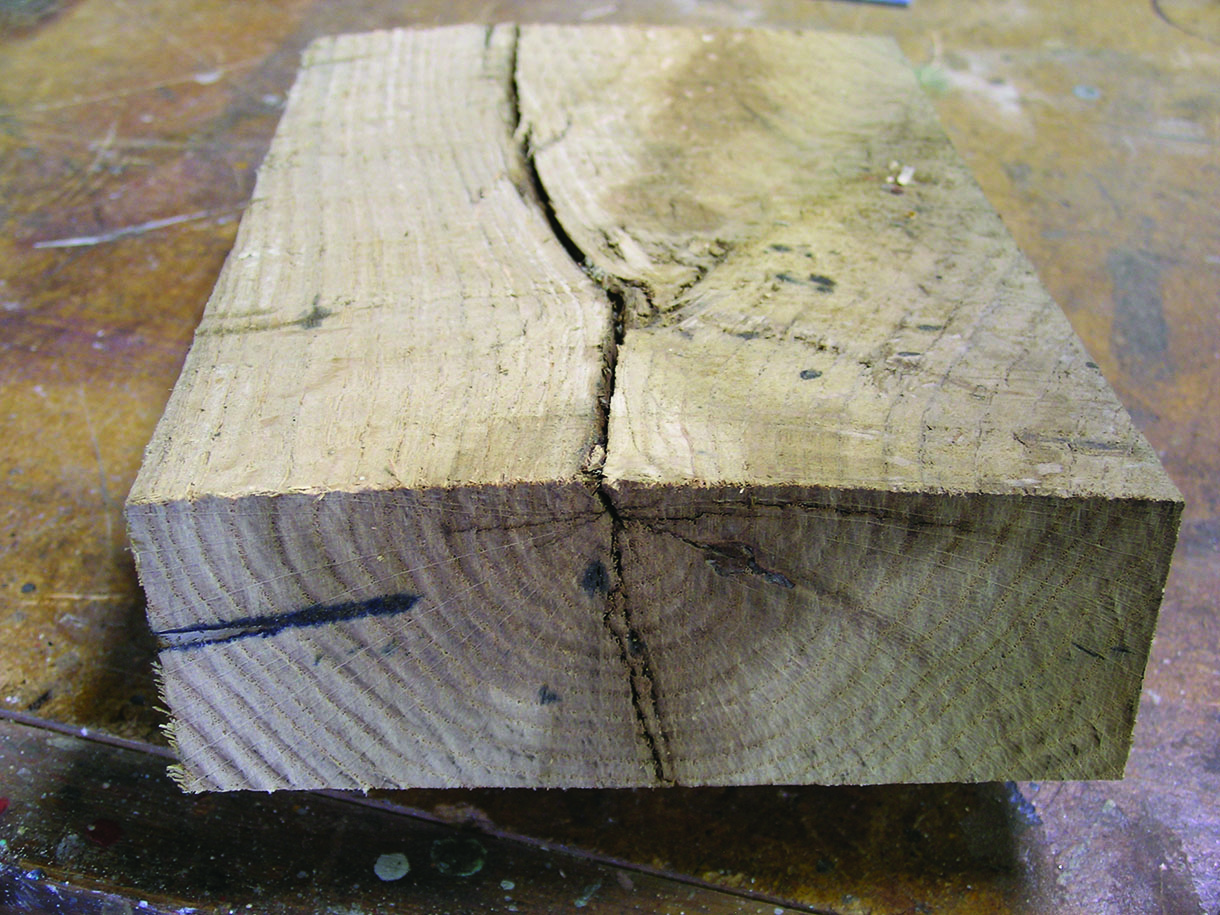 17. Now to create a feature from the least wanted component of these pallets. I searched for the
most cracked and degraded piece of timber I could find, settling on a bearer with heart wood that had ‘exploded’ and seemed beyond any fine woodworking use, but would be ideal for my desired effect! 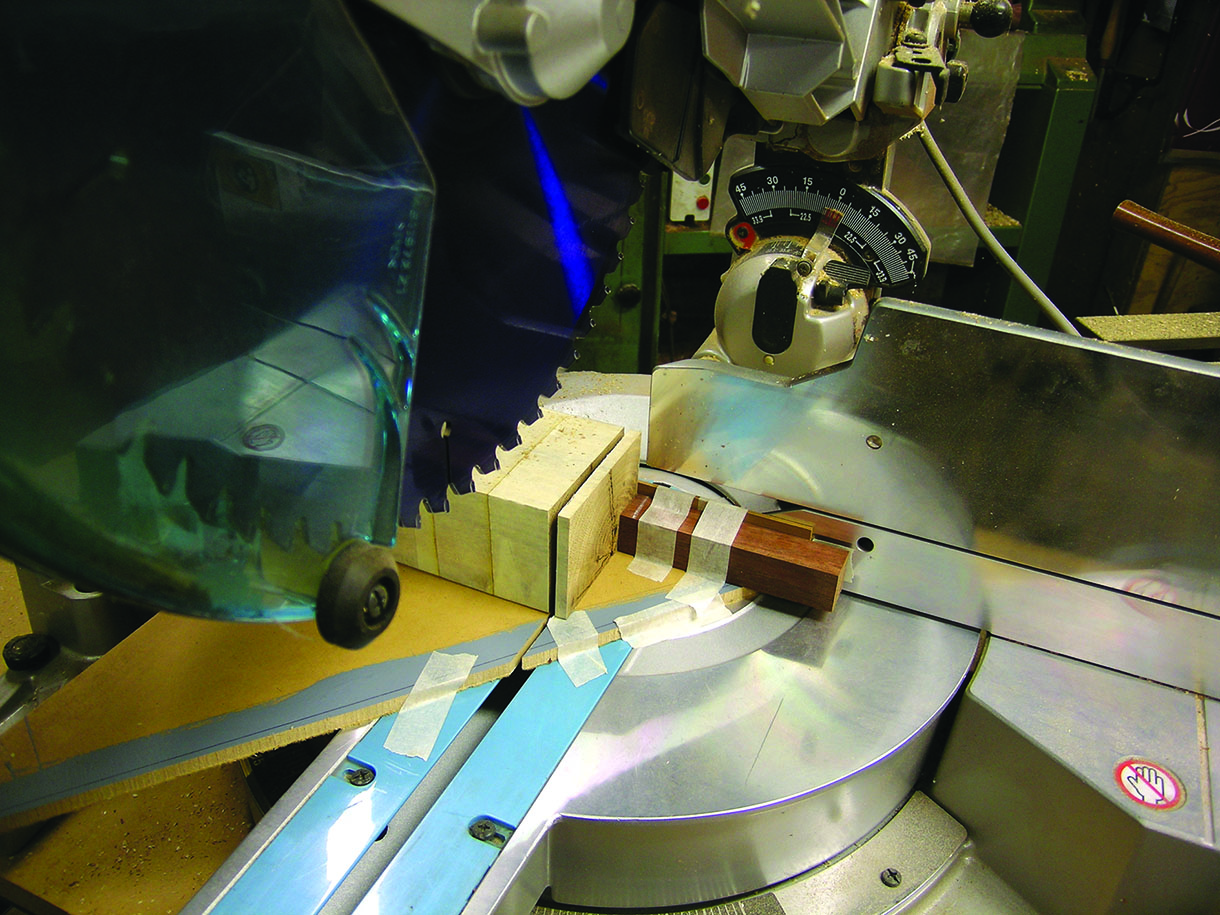 18. Wrapped in masking tape to ensure slices would stay intact; I set up my chopsaw with a stop-block to ensure a series of evenly crosscut cracked gems would remain ready for the next stage of my mind’s lateral thinking. Experience has taught me to wait for the blade to stop spinning after each cut before raising it and facing the likelihood of cut material catching on the spinning blade and being decimated into fragments well beyond any imaginable use 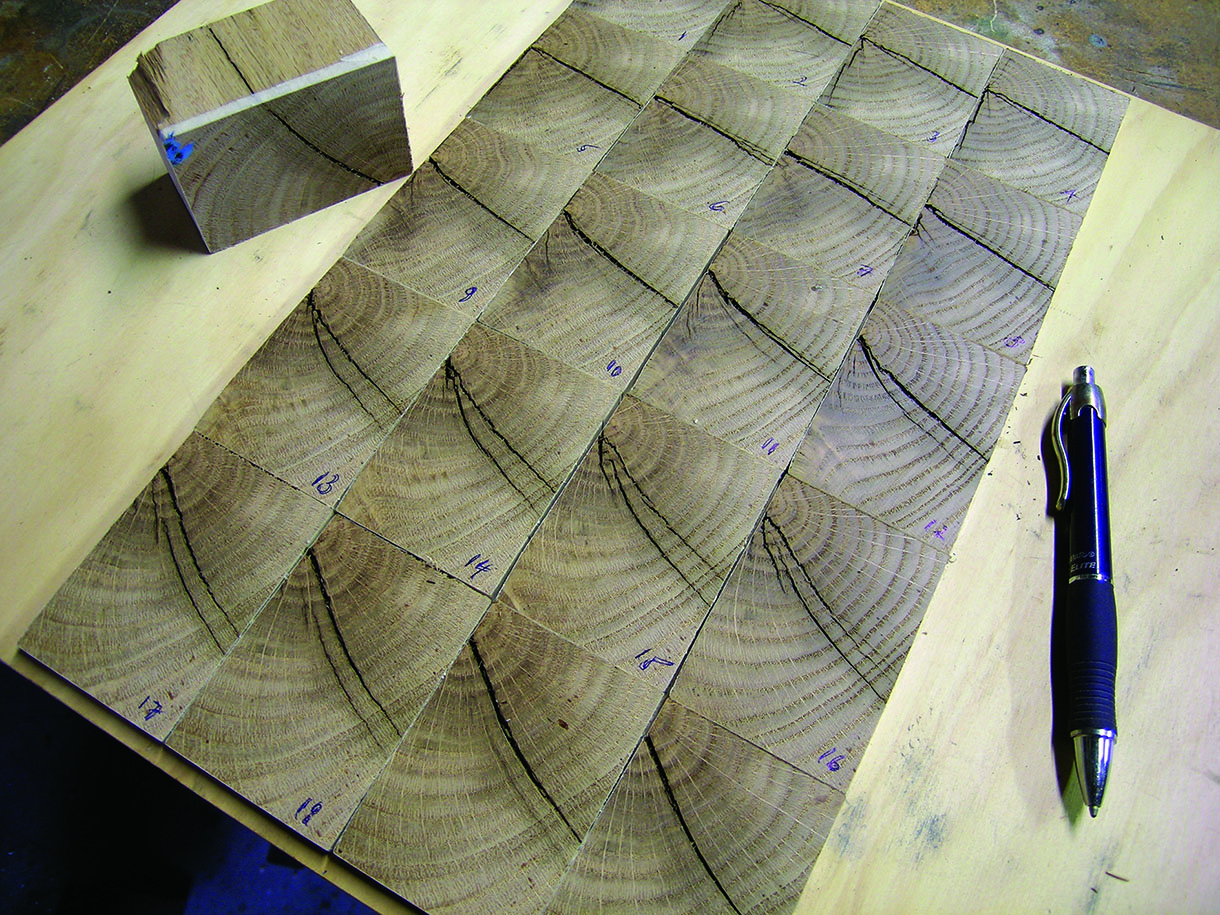 19. Following a number of possible configurations (all numbered and recorded with a camera for future reference) I worked out how the individual pieces would work best with regard to my initial idea. Keep in mind, what starts out as a fine idea can alter drastically as a project develops. Sometimes great ideas end up looking horrible, while not such great ideas turn out to look great, so don’t be shy to experiment! 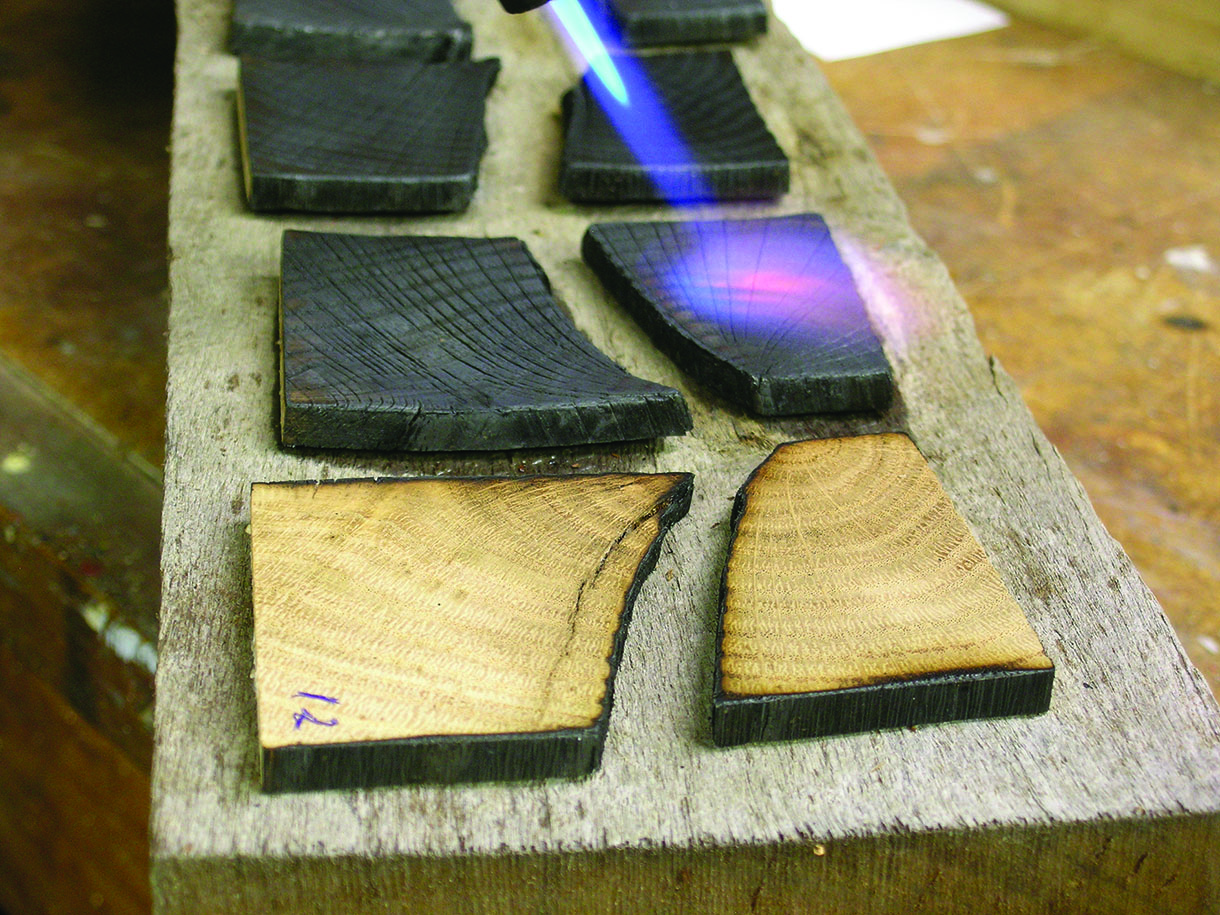 20. Settling on pieces that best served my initial idea, that of creating a landscape effect, I broke suited pieces and burnt them quite heavily with a gas torch to remove soft parts of the grain and leave hard sections prominent 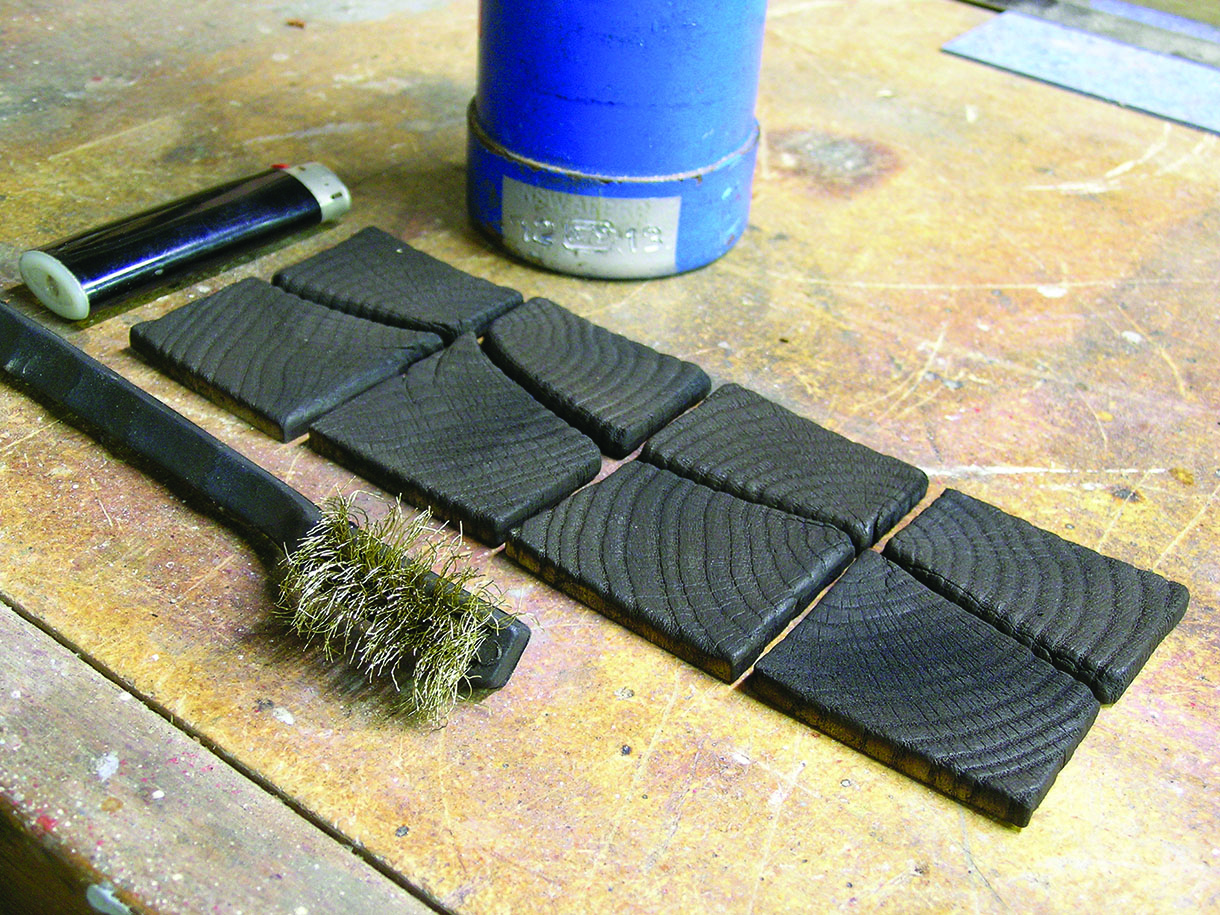 21. Once the timber had cooled and settled, I could remove charred remnants with a brass wire brush to expose growth rings and ‘softened’ cracked edges. Exposing timber to the harshness of a gas flame causes it to curl up on the burnt face, but it will flatten to some extent as the timber cools 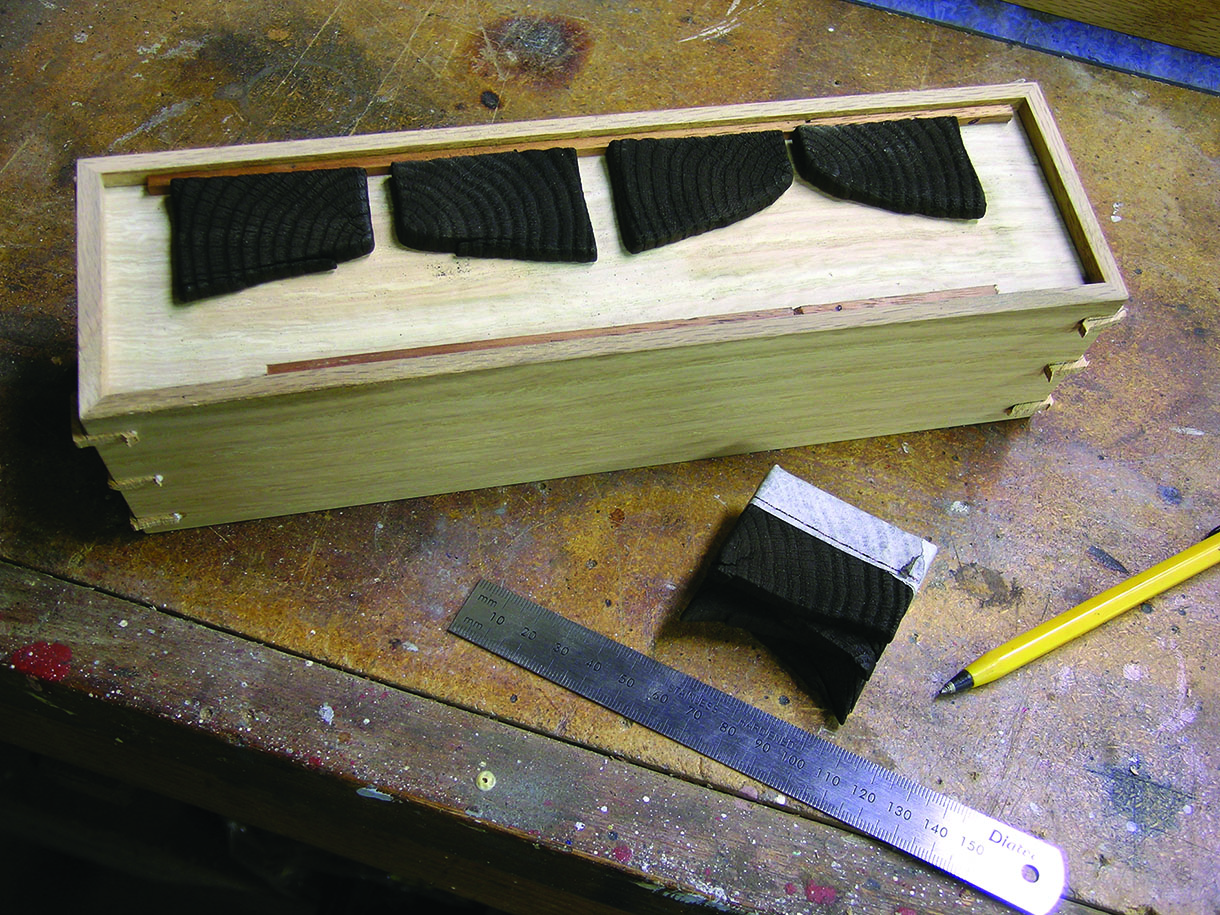 22. Fitting feature sections into the lid required a bit of ‘to-ing and fro-ing’. Some scrap timber was cut to width and fitted between the top edge of the box lid and burnt feature pieces so I could determine how much to trim from the lower edge of matching feature pieces. This was marked onto masking tape before trimming on my bandsaw and another round of burning of edges 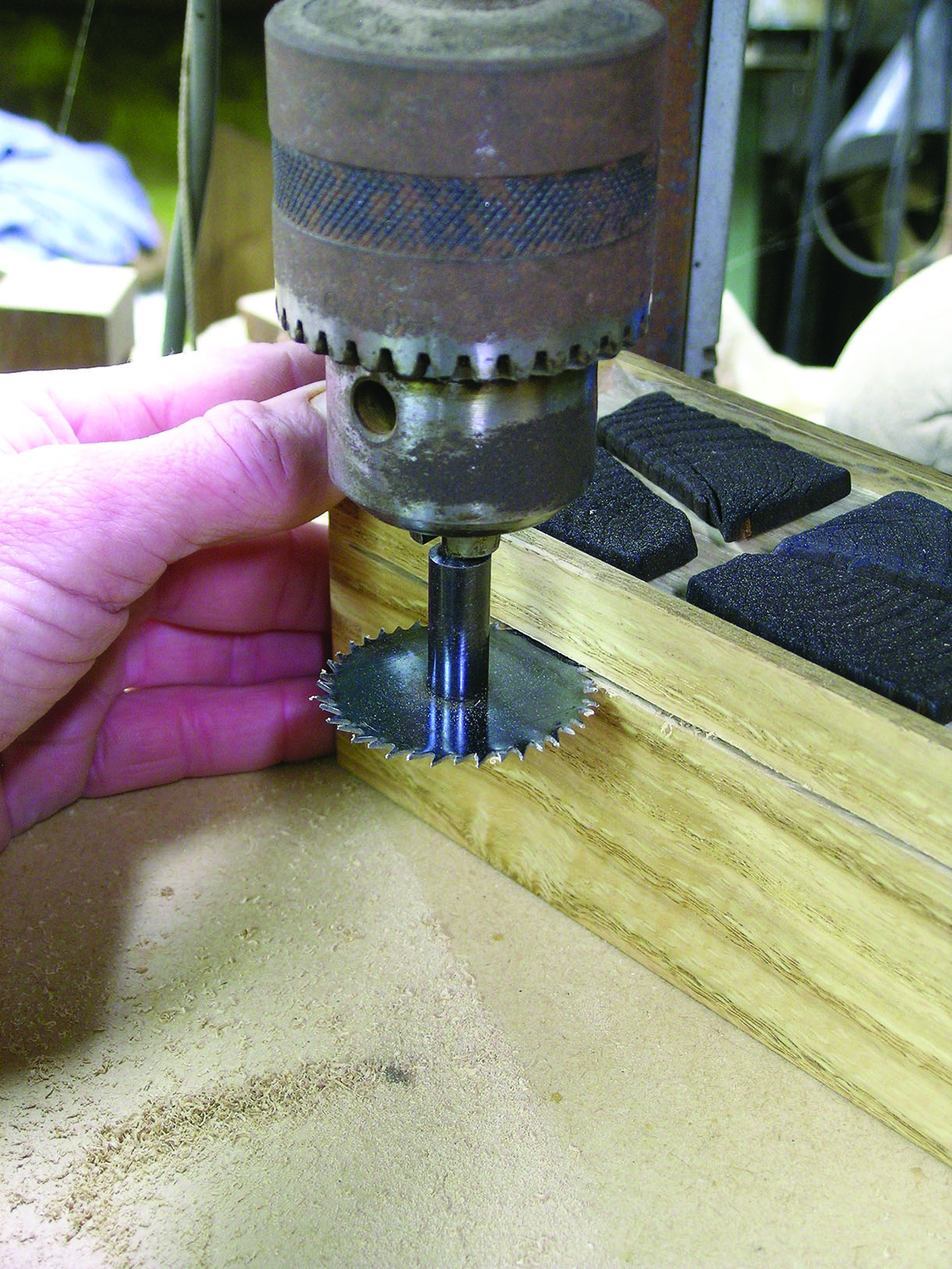 23. With all parts glued securely in place, I could now separate the top and bottom of the box. There are so many ways to do this; on a table saw, a bandsaw, cutting by hand, or the way I opted; on my drill press. I have a blade fitted to an arbor that I can grip in the chuck of my drill press, so it was relatively noise-free to work my way around the box, leaving a small amount of intact wood at each corner which I later cut away with a fine-bladed saw 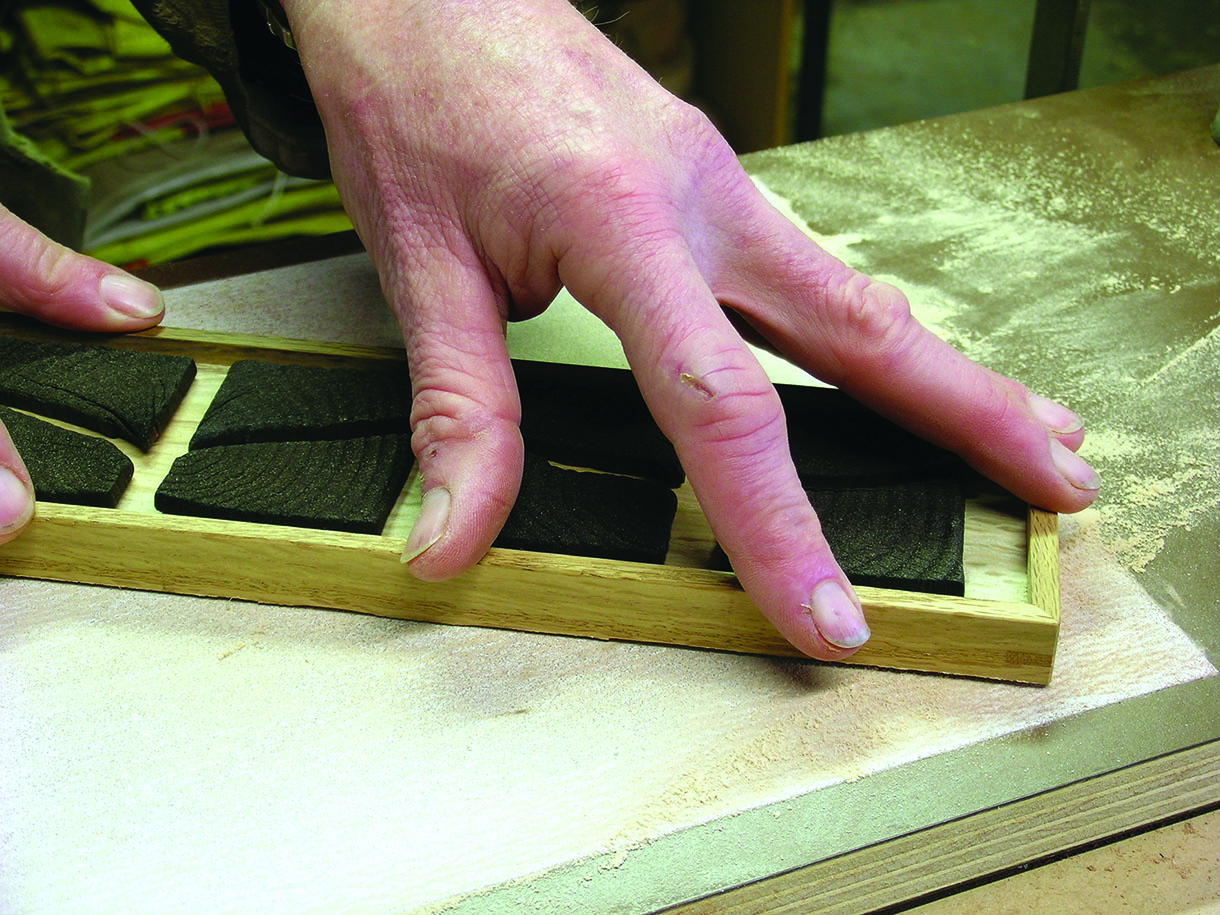 24. Separating the top and bottom is easy, just slice away the remaining nub with a knife and then sand all surfaces flat and smooth on a sanding board, followed by easing of all edges with hand sanding and applying a finish to newly created raw surfaces. The final stage is to cut and fit a thin piece of timber on the inner long edges of the lid to allow it to slide neatly into position and stay located just as it was before the two halves were separated 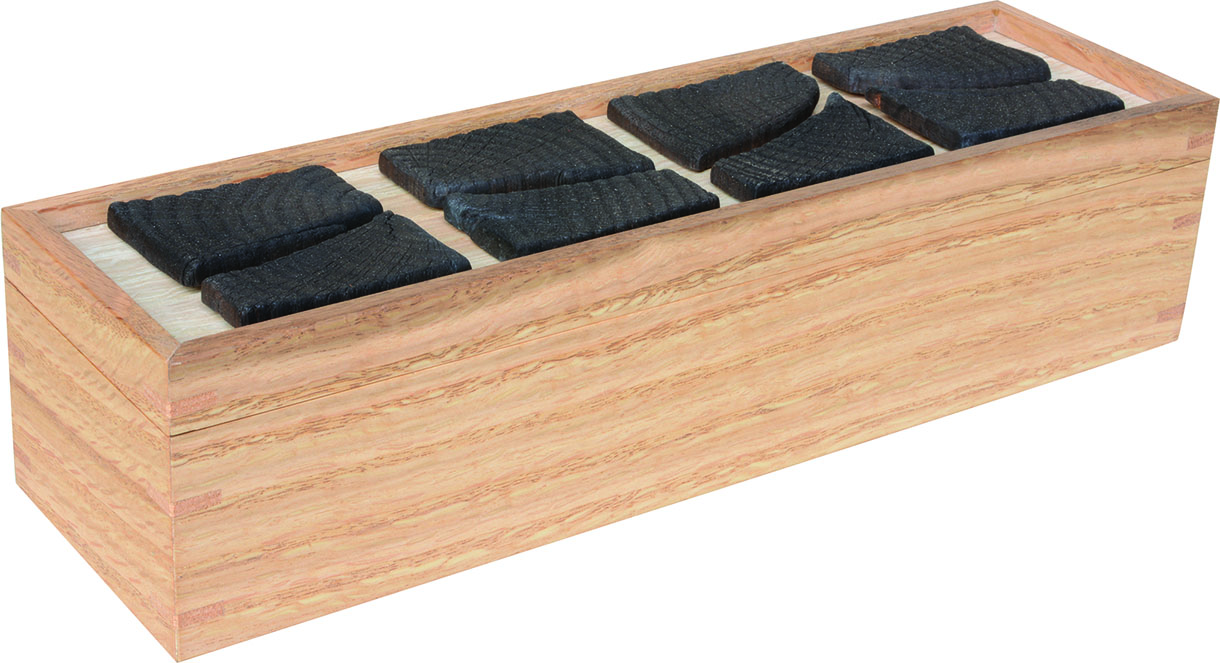 25. This is a somewhat simple project, but there isn’t any doubt, it always gets easier after your first hundred!