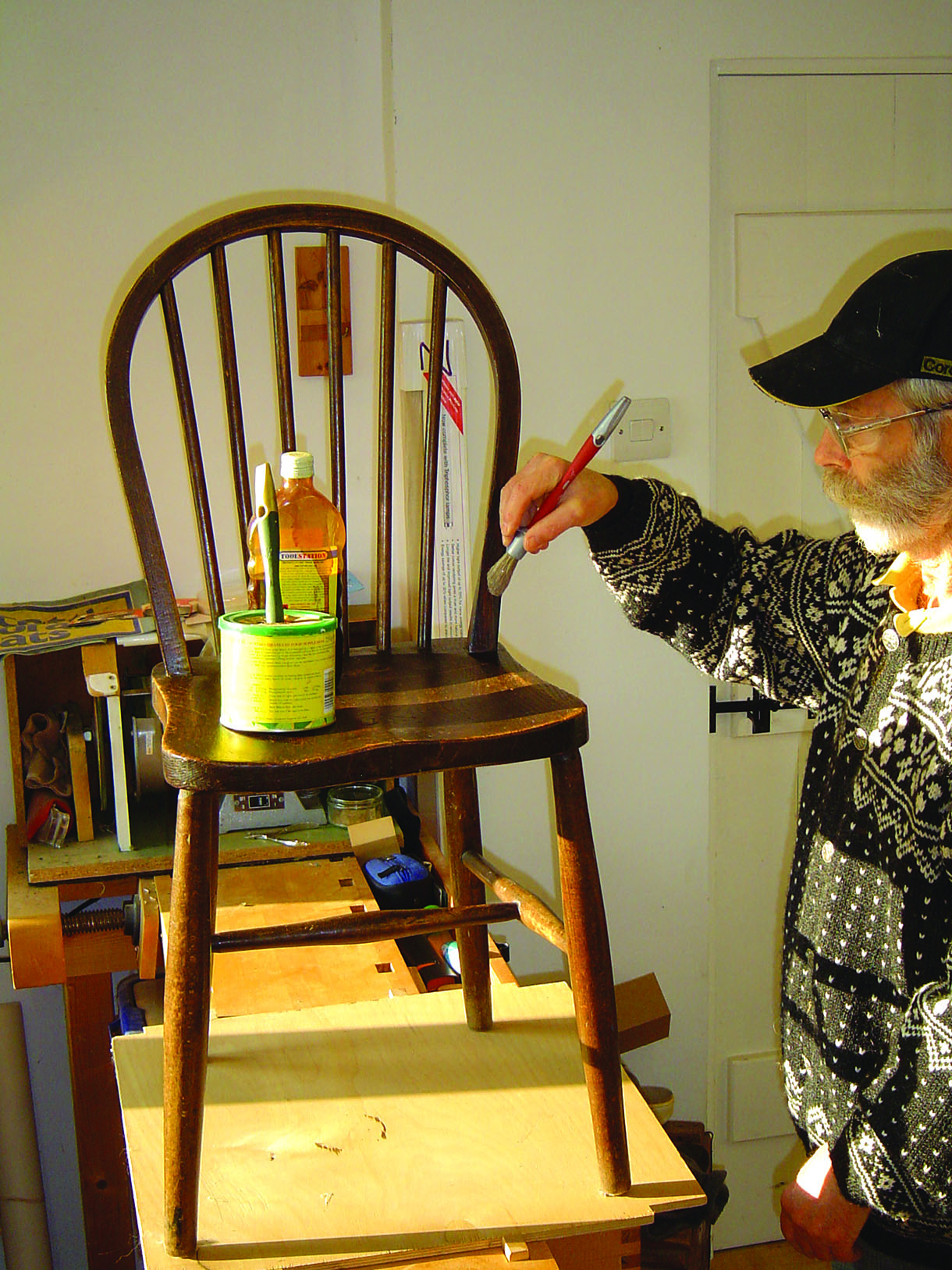 Chairs are misused and abused by all of us and, as a result, are prone to failure. Unfortunately, unless the chair is one of a special antique set, the commercial cost of repairing a single chair often far out-weighs its value. As a result, most woodworkers have been accosted by friends and family, bearing gifts and broken chairs for repair. Unless you are a skilled restorer, should the chair be an antique of value, I would strongly suggest you decline, as chair structural restoration (rather than simple repair) is fraught with hidden dangers – hence the high prices quoted.
In this case, the chair is one of the many thousands of general purpose elm (Ulmus procera) and beech (Fagus sylvatica) hoop-backed utility chairs that were mass-produced in places like High Wycombe, with the woodland bodgers making the turned components by the gross (144 in old money) and the seats and assembly done under factory conditions in the town. These were the IKEA chairs of their time and were the common type of seats used throughout the 19th and 20th centuries. They featured widely in chapels, schools and pubs, so have little commercial value. This one is part of a ‘set’ that was bought as a job lot, so it will cause some inconvenience to match up the remainder with a replacement. As a result, a straight repair is justified, rather than restoration, hence bringing with it no worries about effects on value – just the need to observe the general protocols of furniture restoration.

Restoration notes
An old Windsor chair is a complex structure where a combination of pre-planned wood movement, plus wear and tear makes for an entertaining combination when trying to disassemble. There should be no mechanical fixings in the chair, but the main holes in the seat were designed to distort with drying, hence lock the main structural parts, i.e legs and backs, firmly in place. So broken pieces will have to be cut or drilled out. However, it’s not uncommon to find these have been repaired before and if you’re lucky, with hide glue, that you can reverse with heat.  When re-assembling any old furniture, never use metal fasteners. If a mechanical fastener is unavoidable, use a cocktail stick instead of a panel pin and a peg or wedge instead of a screw. Please think of the next person who will have to fix the item and only use reversible hide glue, as modern glues are so effective that they can only be cut out, together with the adjacent timber, for any future repair. 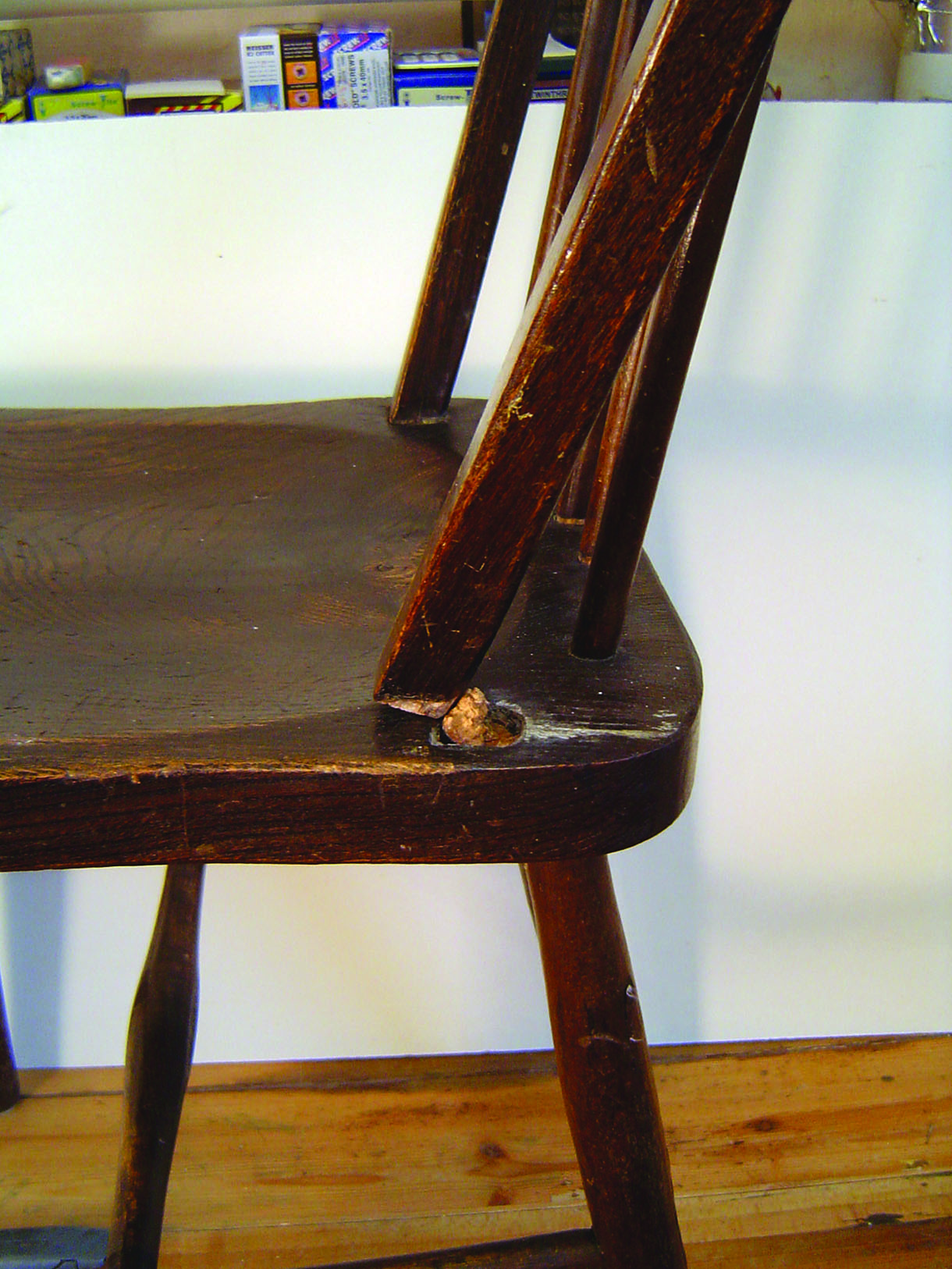 1. One end of the beech hoop back had broken off at the junction with the seat, leaving a small stub sticking up. As this was firmly wedged by the use of differential wood movement, the first step was to carefully drill through from the top to create a hole large enough into which to break the remainder of the waste with a gouge, although careful use of a chisel would suffice. Care was taken to get the angle right with the drill, so as to not end up with a damaged hole in the seat. A thin pilot hole was used to make sure it was going through the centre. The pilot hole was then followed by a larger hole about half the original diameter of the chair back 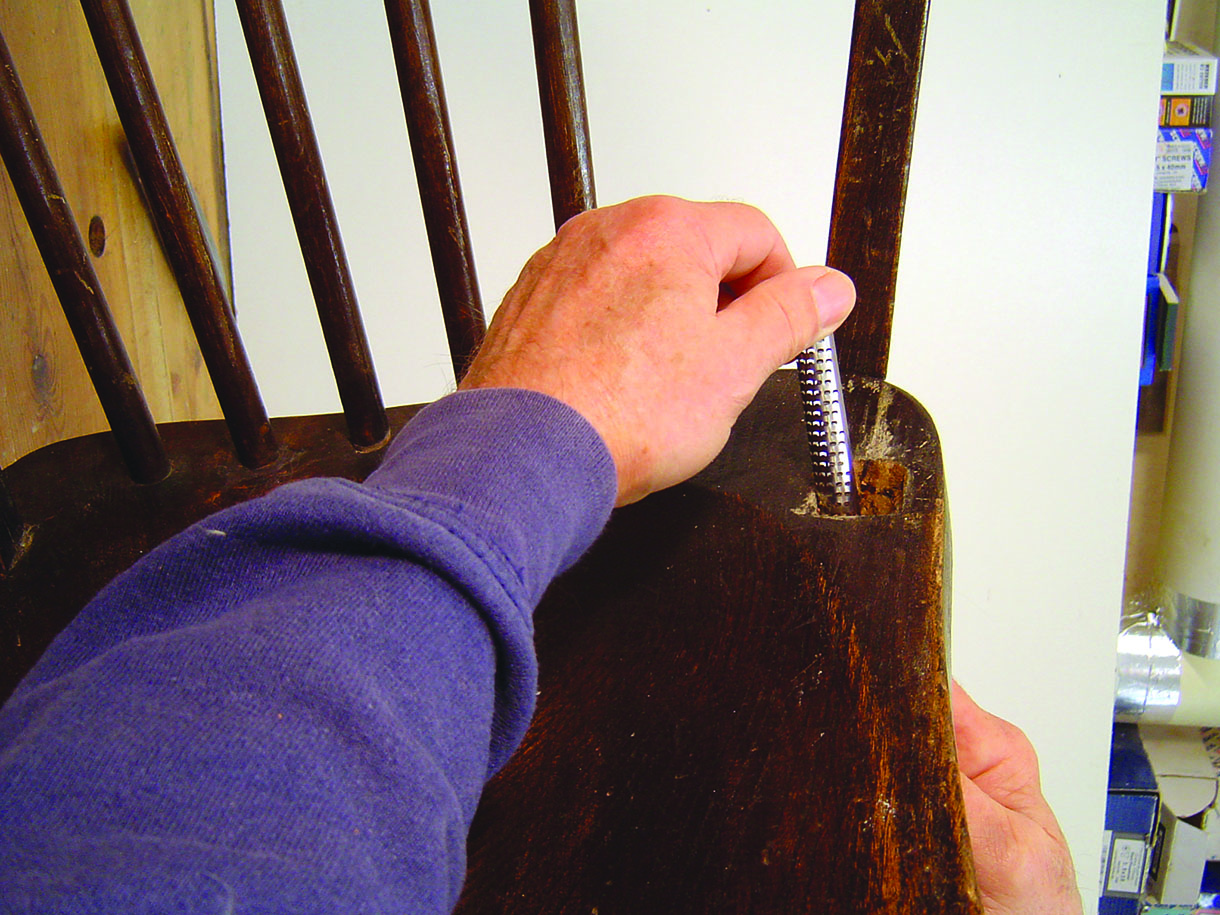 2. With the bulk of the waste removed, the hole could be tidied up with a rasp. I found this was where the microplane series actually out-performed the traditional rasp, but this may be unfair on my old rasps –
if I had spent as much on a new quality rasp as I had done on the microplane, it might have done a better job! 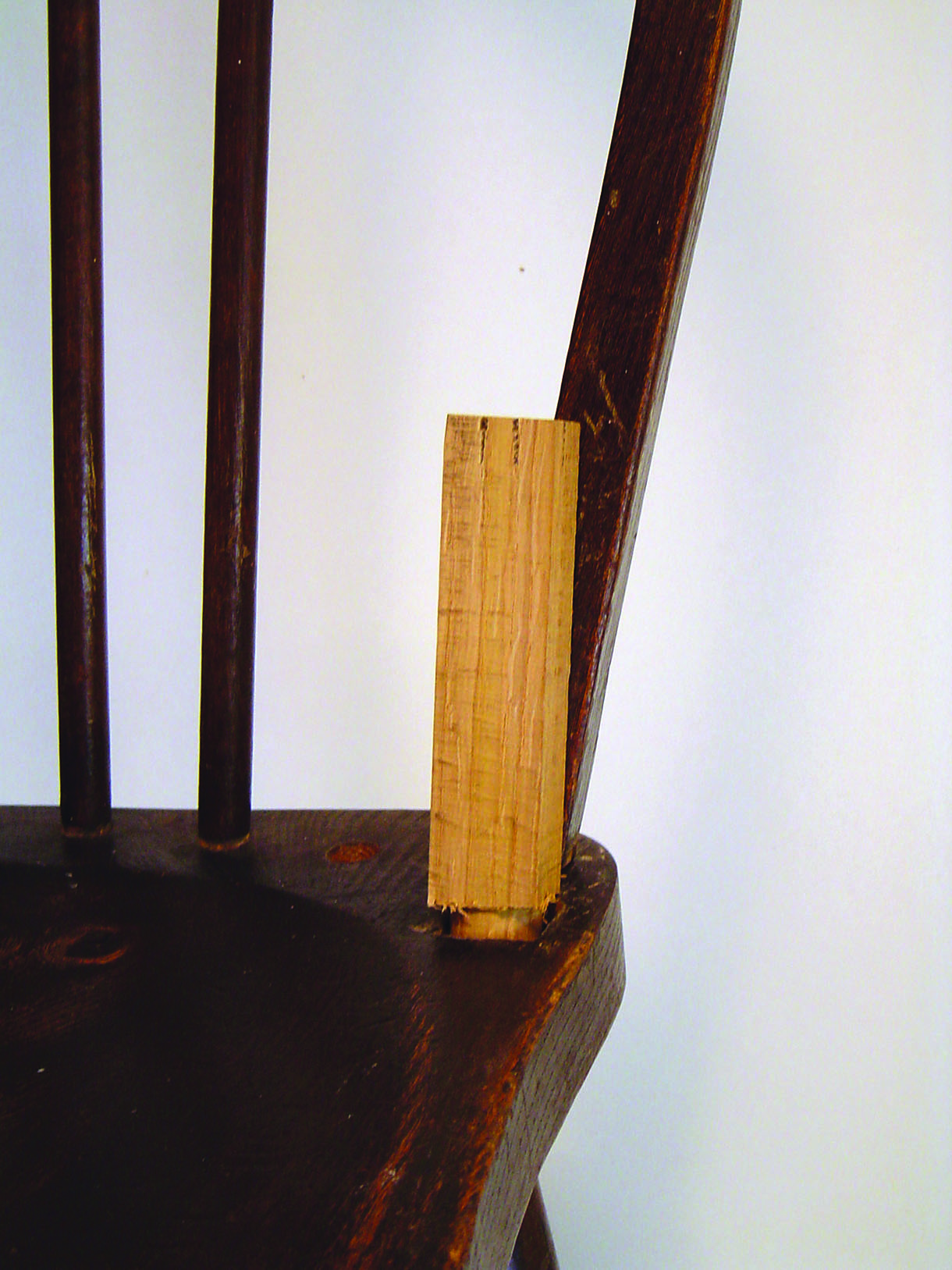 3. A bit of over-engineering saw a small billet of oak offcut roughly sawn to 25mm square, which was then put on the lathe to turn the tenon to size. This was followed by a quick test fit, at which stage the shoulders were marked for adjustment for the contour of the seat 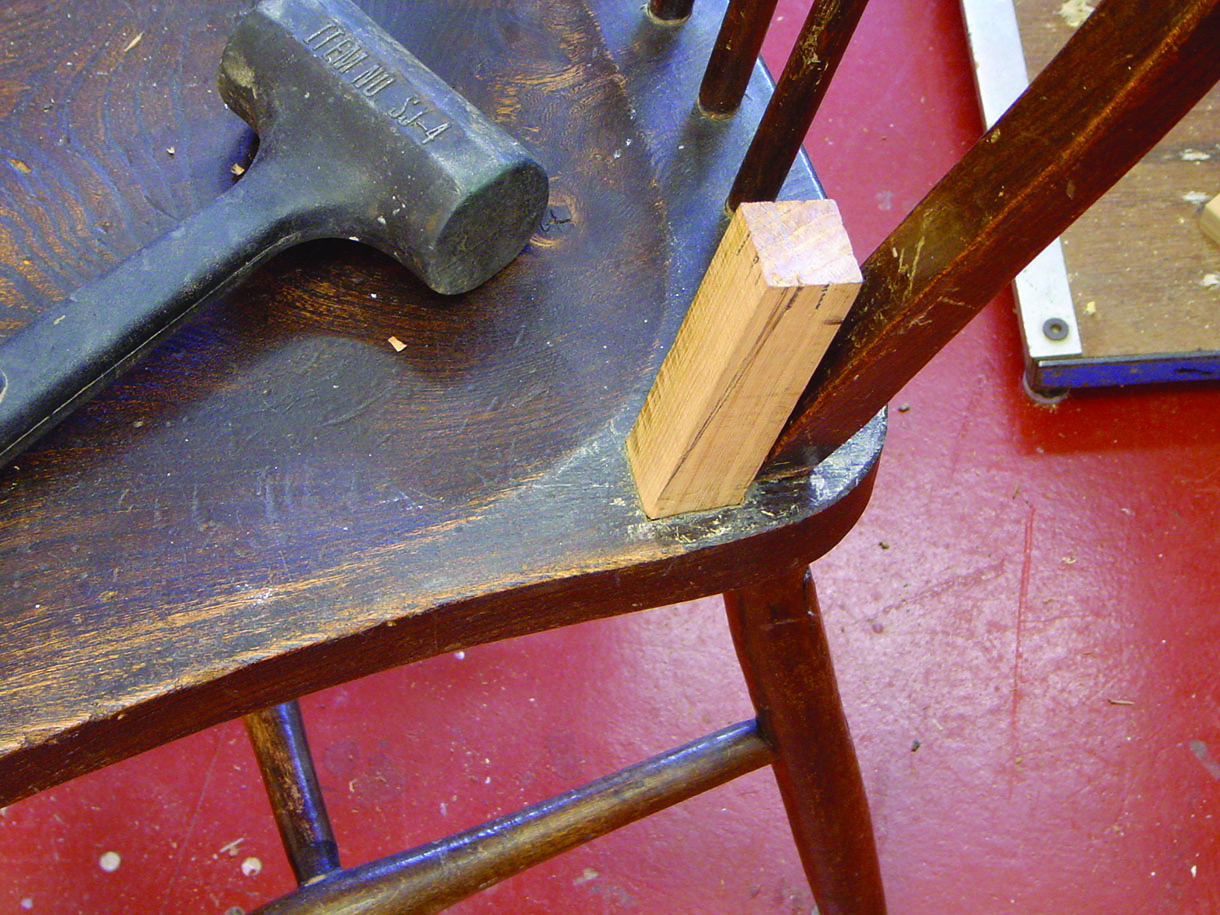 4. With the shoulders trimmed to shape, the square oak peg was temporarily driven home and the broken end of the back-hoop lined up on it to mark the required angles for the dovetailed scarf to meet with the back-hoop 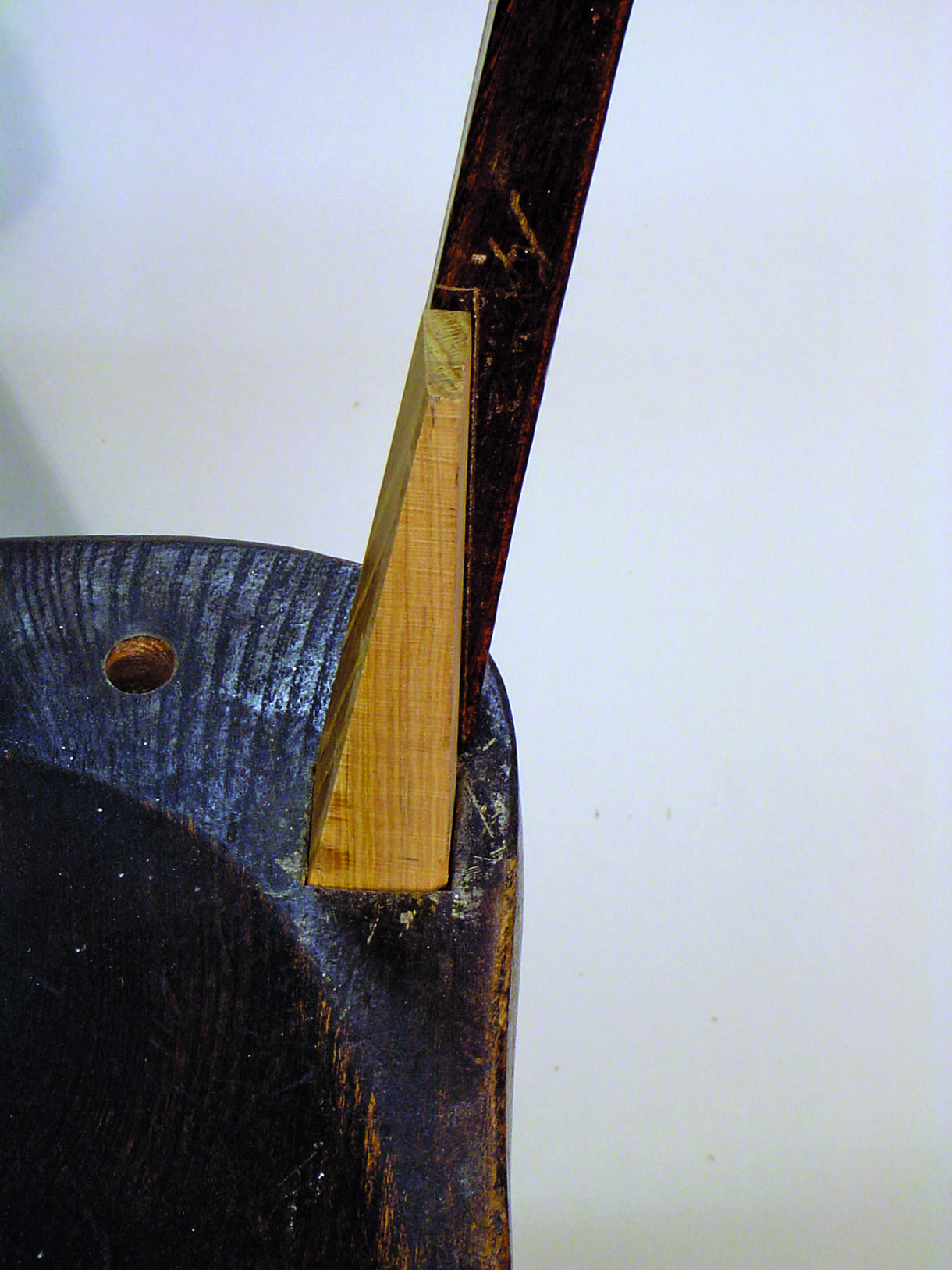 5. The scarf on the peg was then trimmed to shape, after which the oak peg was firmly driven home and could probably have been left to chance. However, in line with the earlier over-engineering, either a wedge could have been inserted from below, or some hide glue could be applied before final fit 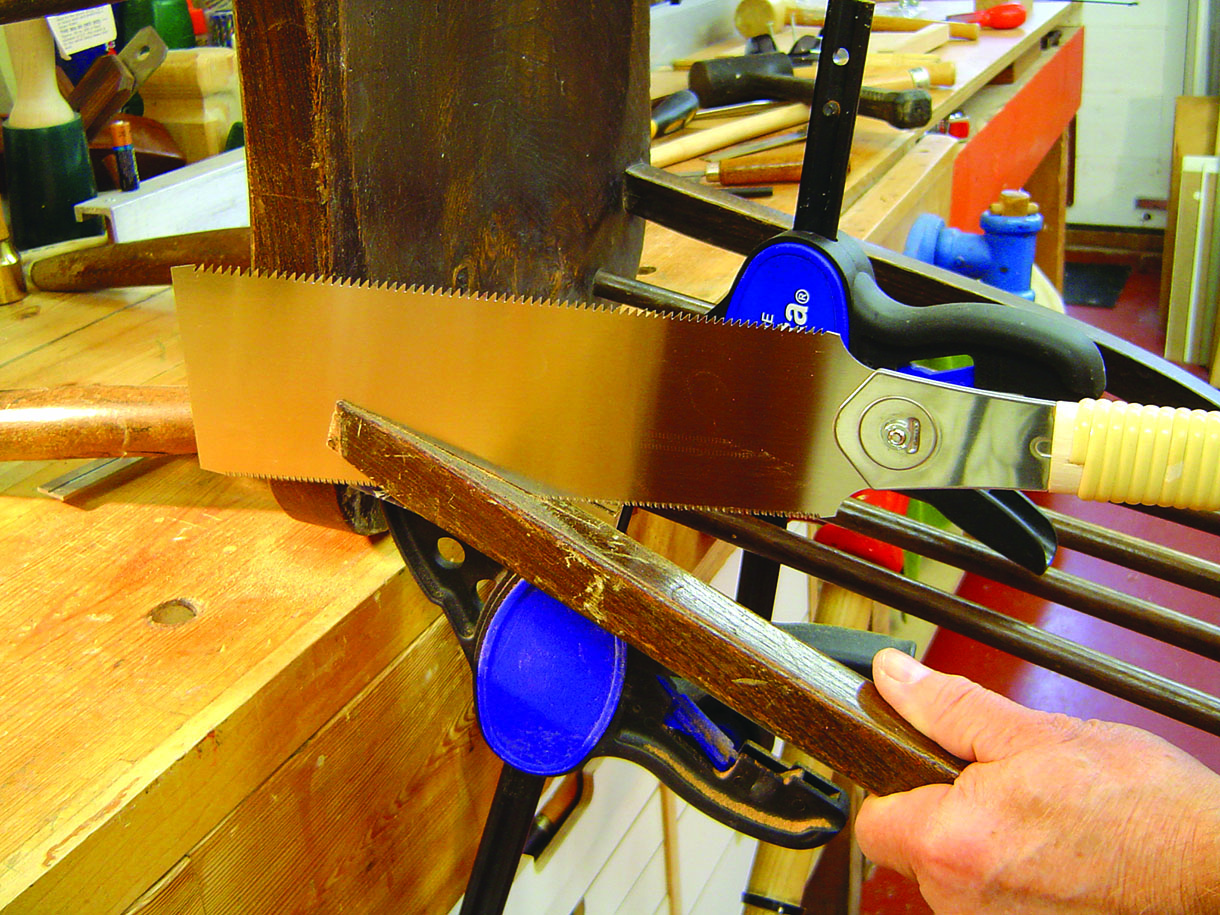 6. The back hoop was then offered up and marked, as the new peg was not going to move during the rest of the repair. Some care and ingenuity was needed to clamp the chair firmly to enable the scarf to be cut accurately in-situ without inflicting new damage to the chair en-route. This was where the large twinscrew front vice on an old carpenter’s bench came into its own, as once secured, the chair was going nowhere. I am sure ingenious configurations of other styles of vices and clamps will serve just as well 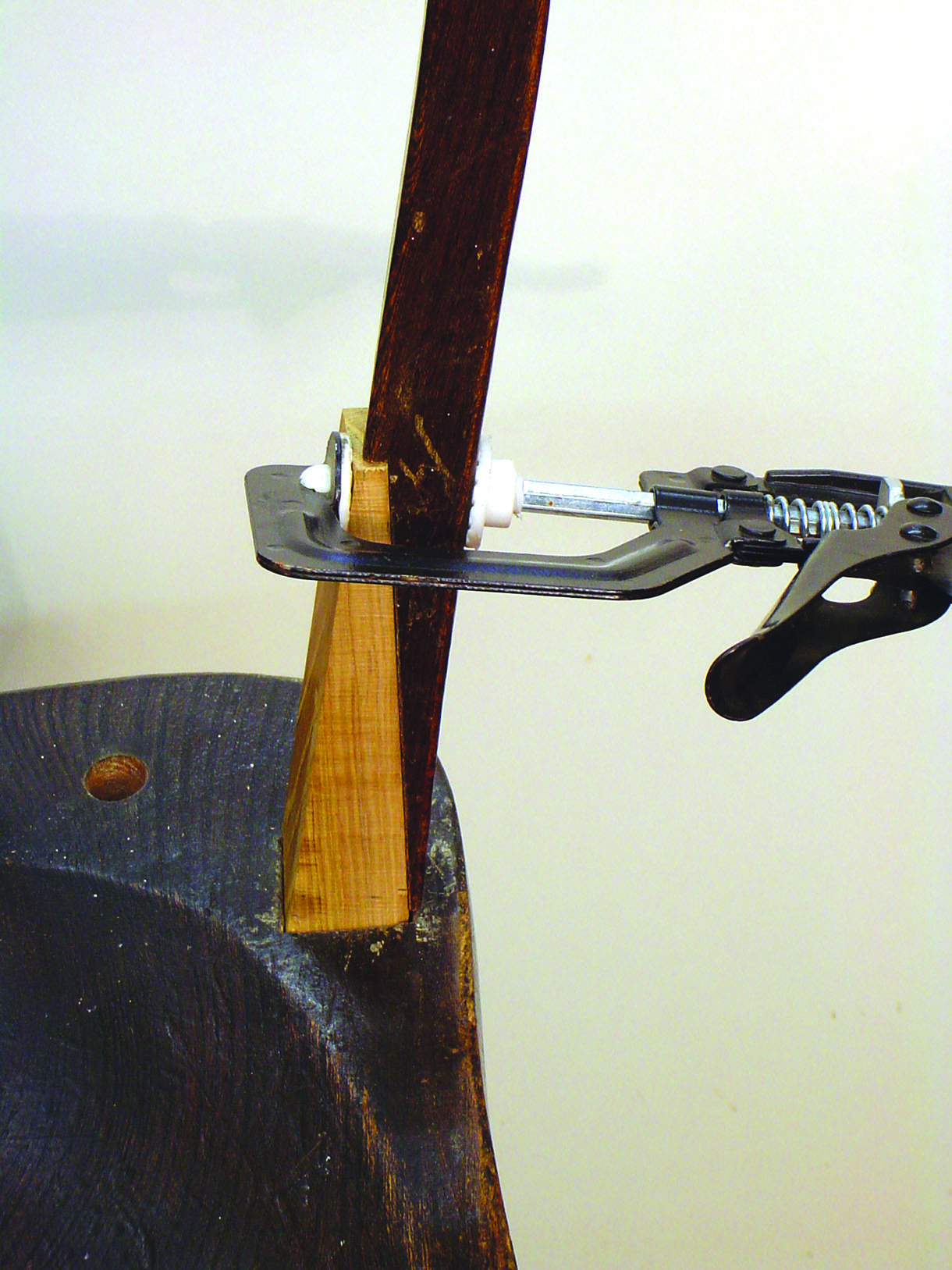 7. The usual routine of test fit and adjust then followed, before the back hoop was glued and clamped to fit. In this case, modern glue was necessary on the scarf, as the scarf joint is a repair that will never need to be reversed but needs to be as strong as it possibly can 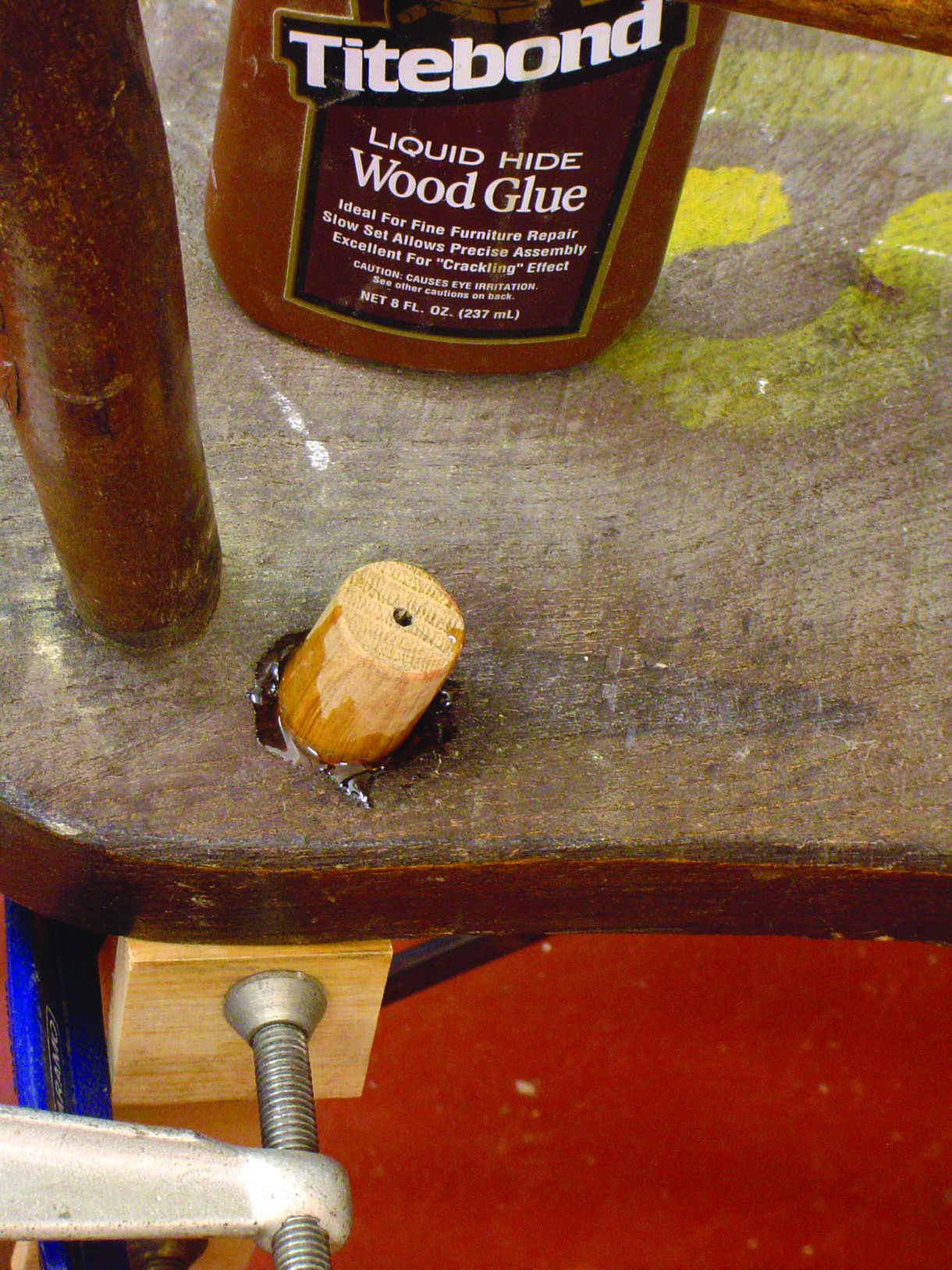 8. Before the protruding peg was trimmed, the gap-filling properties of hide glue were employed by pouring it into the joint to fill any voids created in the removal of the old broken end. I made sure it was not running straight through and gave it plenty of time to set before topping it up as necessary 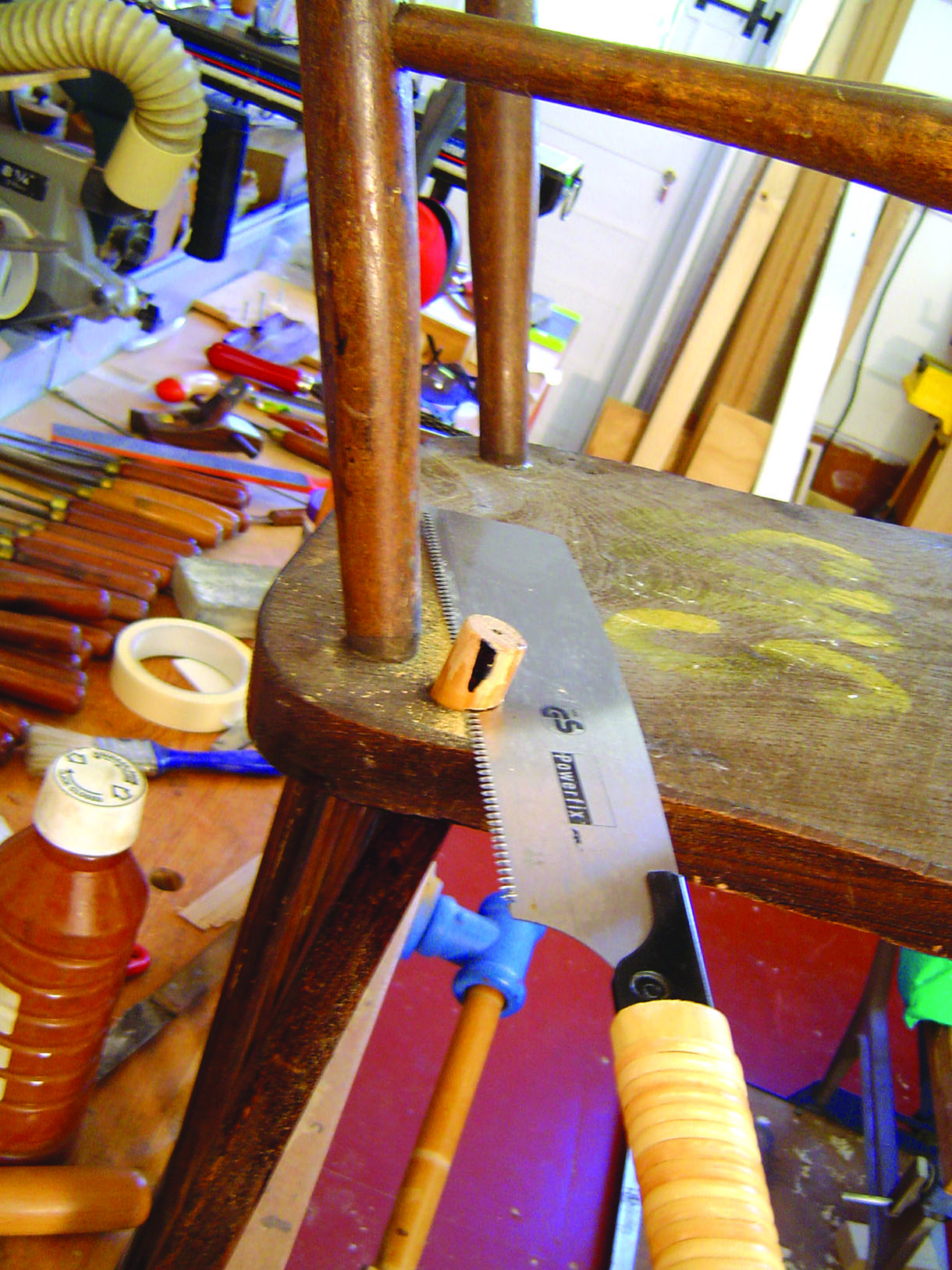 9. When all the glue was firmly set, I then trimmed the bottom of the peg flush to the underside of the seat 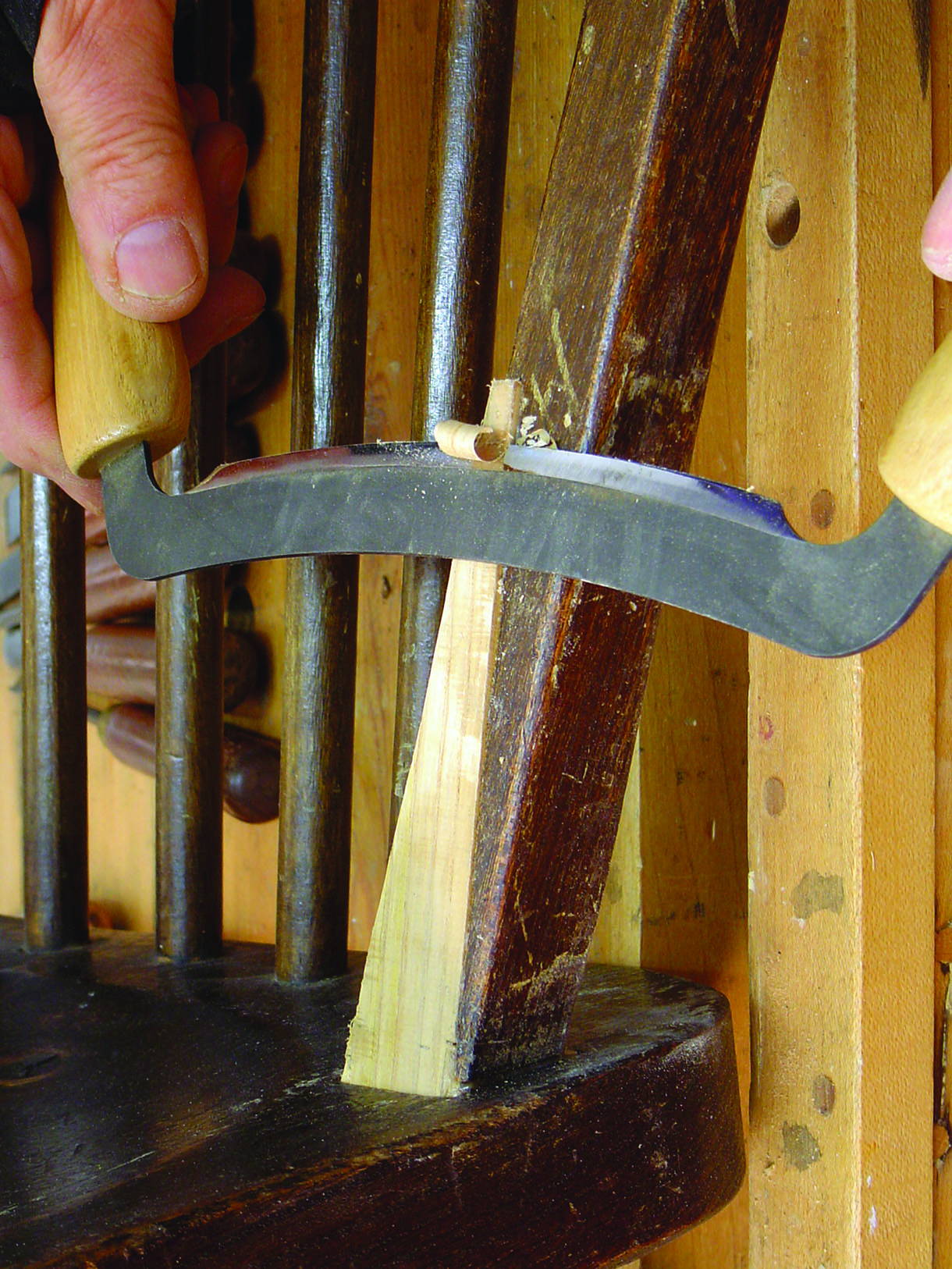 10. As the top of the peg was left oversized, I then trimmed it all round to fit the hoop 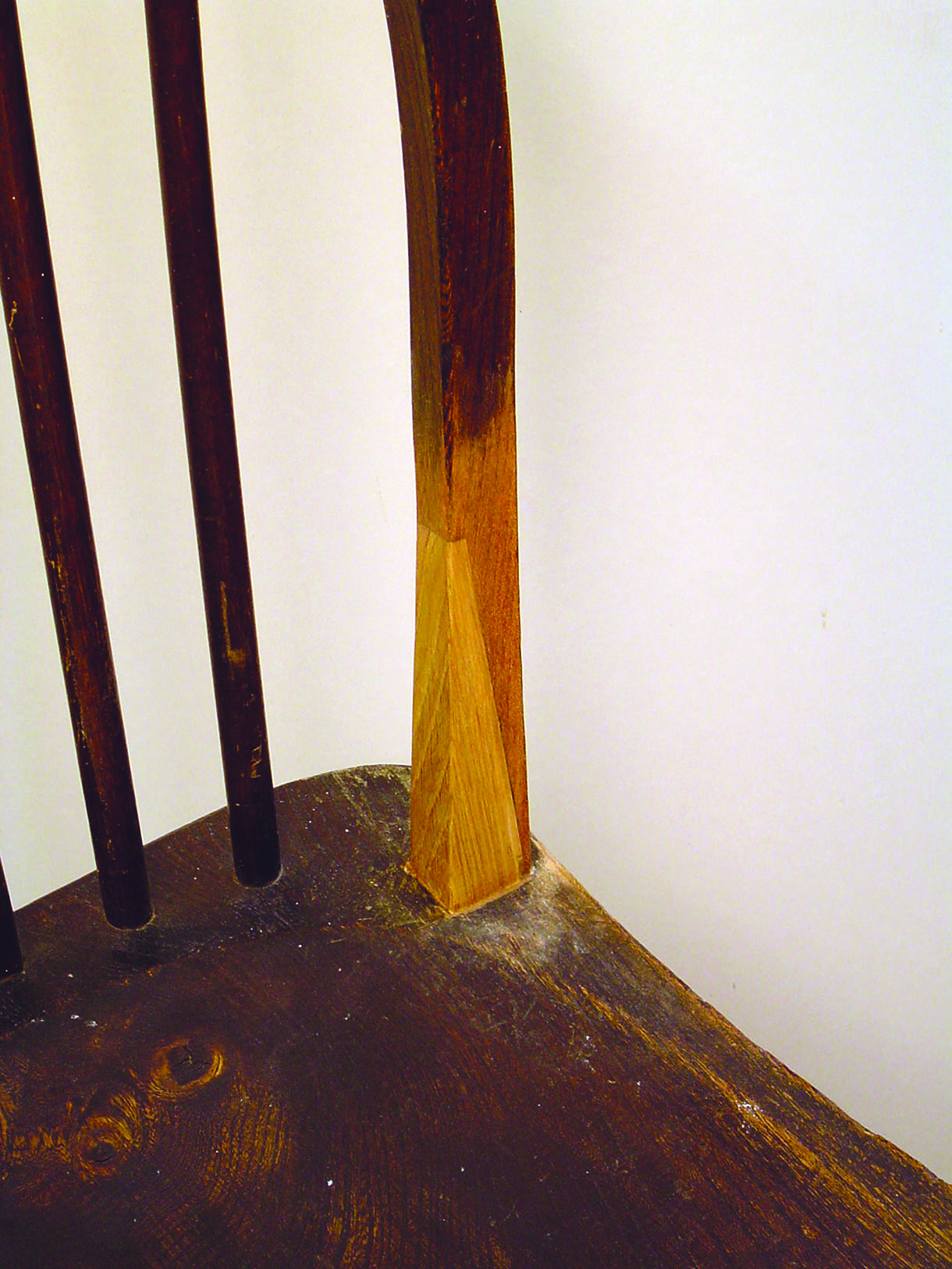 11. Once the join was flush and when I was finished with edge tools, the final surface was achieved with abrasive, leaving a flush finish. Inevitably the original French polish on the hoop was damaged by the trimming and sanding, so I made sure it was feathered back along the grain 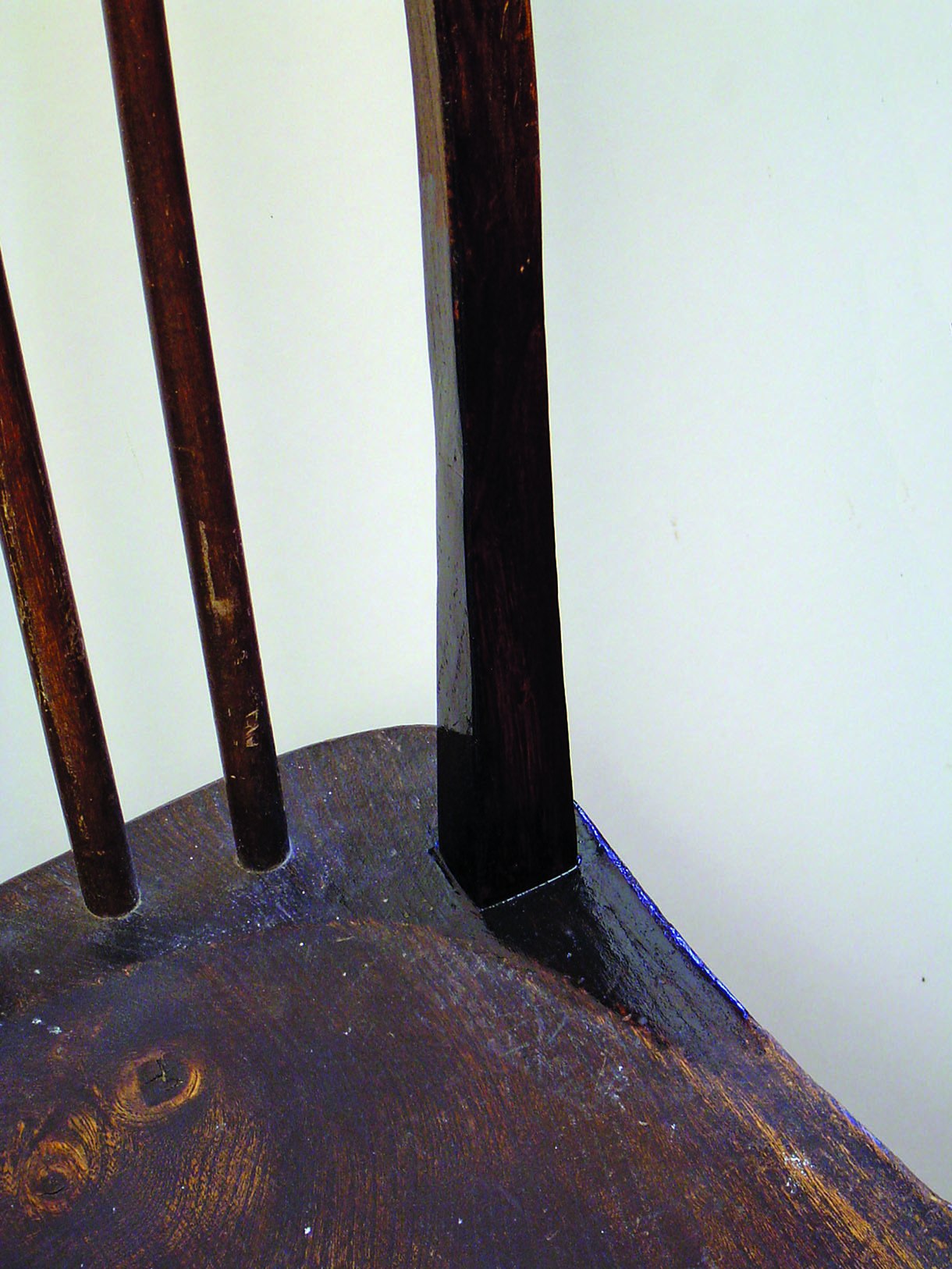 12. Staining the finished work to match the original, I preferred to use a solvent-based stain as it sets into the grain better. Finally, I applied French polish and a suitable wax for an effective and discreet repair

Colour matching
The art of colour matching is subjective and is a result of building up of the colours of wood stain, plus the hue of the over-laid French polish. This can be tweaked by the colour of the wax polish used to finish it all. As I needed a dark oak finish, I used the darkest Garnet polish. Button polish gives a brighter red/brown finish, better suited to mahogany, while Garnet polish is richer and darker, more suited to old oak. Blonde polish is available to be used as a transparent seal coat. I applied several coats over a number of days, as a new coat would re-dissolve underlying coats. I kept going until I achieved an acceptable colour match and allowed the finishes to fully harden off before touching the surface up with coloured wax polish.