A Cracking Good Bowl:
Andrew Potocnik makes the best of a bad situation by finding an inventive and artistic solution 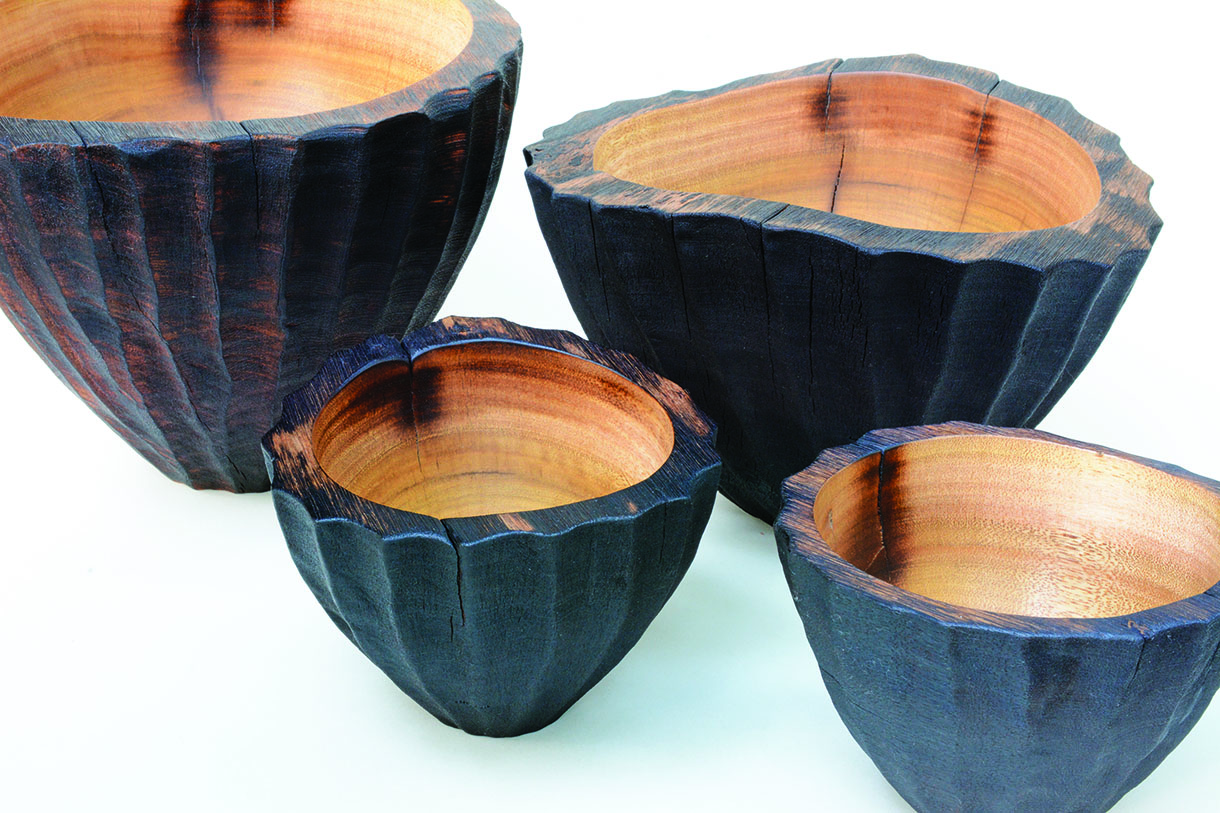 When turning production bowls, I like to work with ‘green’ timber – timber that is fresh cut and wet. Most wet wood cuts with ease, produces less dust and you can begin with a tree in the morning and have a completed bowl by the evening, depending on the route you take.
Another reason I like to turn bowls ‘green’ is that I don’t need to buy wood. I can use wood left over after clearance operations, including limbs that have been trimmed, or trees that need to be cleared after storms. The best part is that this wood doesn’t cost me anything other than my time and energy to cut and transport it. However, once in my clutches, there are times when it’s too difficult to convert masses of wood into bowls in one fell swoop. This is when I cut it into blanks with a chainsaw, sometimes on the bandsaw, and put it aside for later use. Placing blanks into plastic bags prevents moisture from escaping from the wood at an uncontrolled rate and, in turn, prevents cracking which usually means the wood is useless for turning bowls.
Here is a story of where the whole process got out of control and how I adapted techniques to salvage cracked wood, converting degradation into a feature and dealing with a few hiccups along the way.

Rough-turned bowls
I had several pieces of timber that had been rough turned and placed in plastic bags quite some time ago. As plastic shopping bags have a built-in timeline before they begin to decompose, I found time had run out for these bags and the wood inside had begun to crack, meaning it was no longer good for turned bowls. Nevertheless, I was determined not to let this wood go to waste, so mounted each bowl between centres and trimmed them down to see the extent of cracking and how I could deal with it. 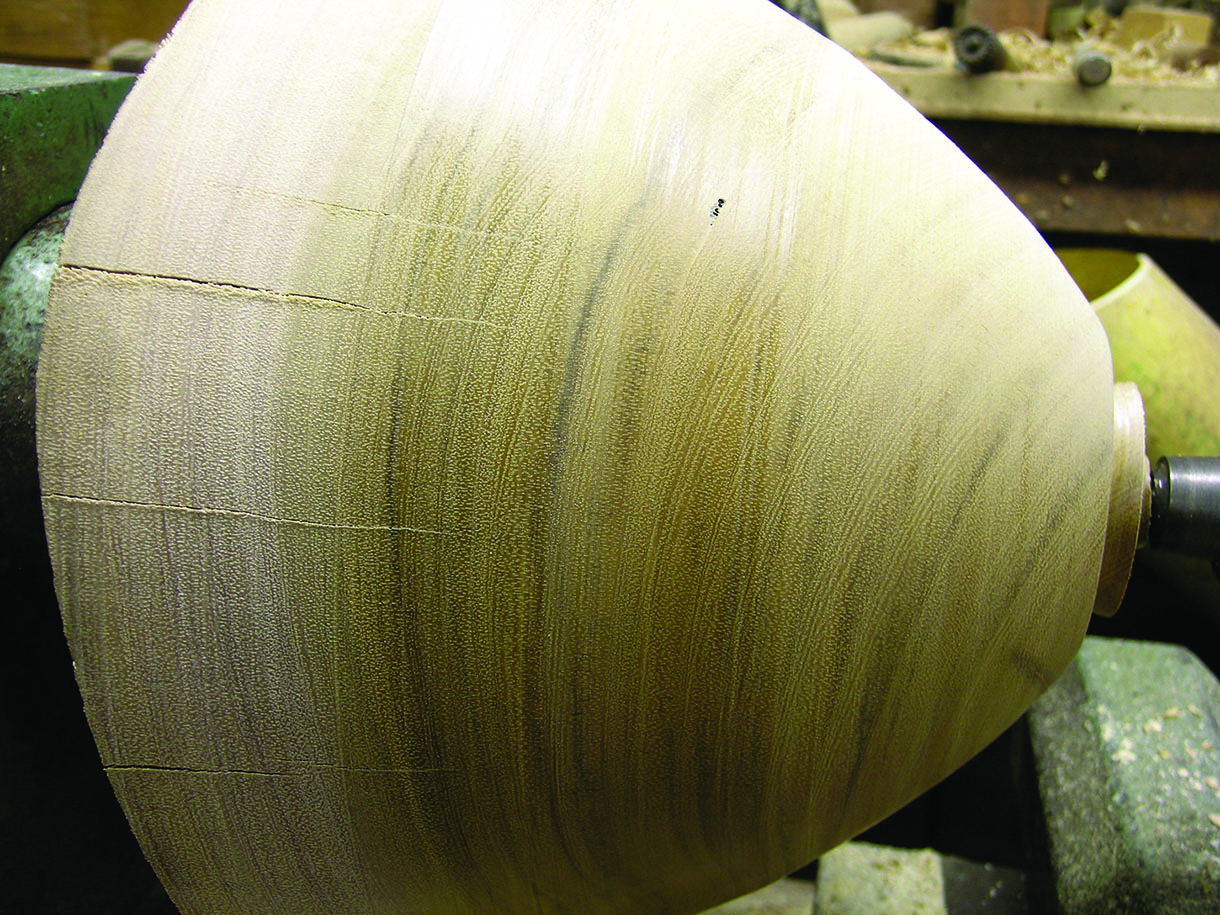 Working with cracks
After putting this project on the back-burner and freeing up my mind, a simple solution came out of the blue. I would carve the exterior and burn it to highlight cracks and any other imperfections. I fitted a mini-carver to an angle grinder, being careful to lock the lathe’s spindle so the wood didn’t move during the operation. The most important thing to keep in mind with a technique such as this is control. You need to be in control of the angle grinder, so be sure to lock your elbows into your body and twist from side to side to create sweeping cuts. It’s all too easy to simply wave the grinder over the wood and lose control, turning a waste bit of wood into firewood and hurting yourself in the process. Assuming you’ve come out of the experience unscathed, you won’t be afraid to experiment again and  create greater textures and effects.
Working my way around the bowl, I wasn’t too concerned with regularity of flutes, nor where the flutes met, as burning would remove the sharp edges. This texturing was intended to be rough and organic. Remember, this was wood that had cracked beyond normal use under woodturning definitions. 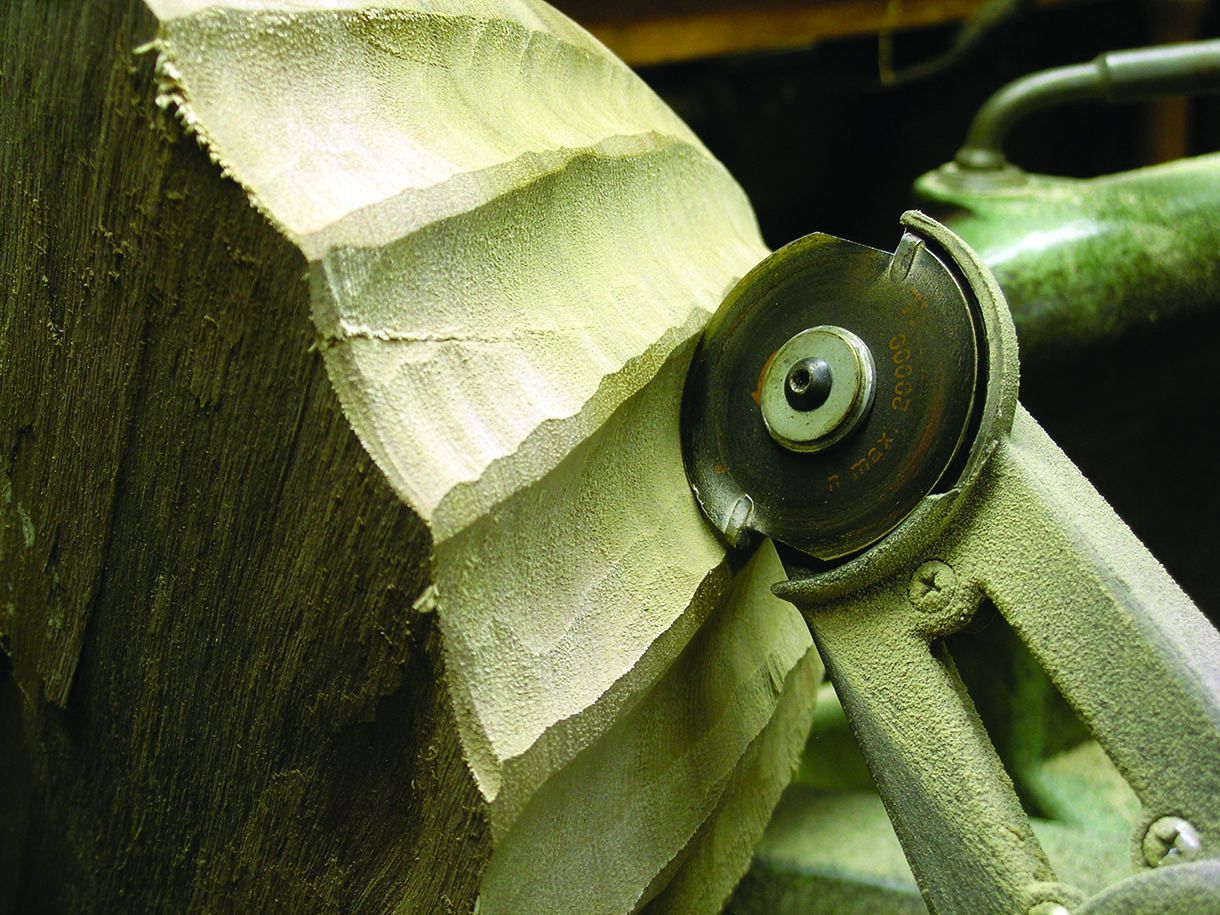 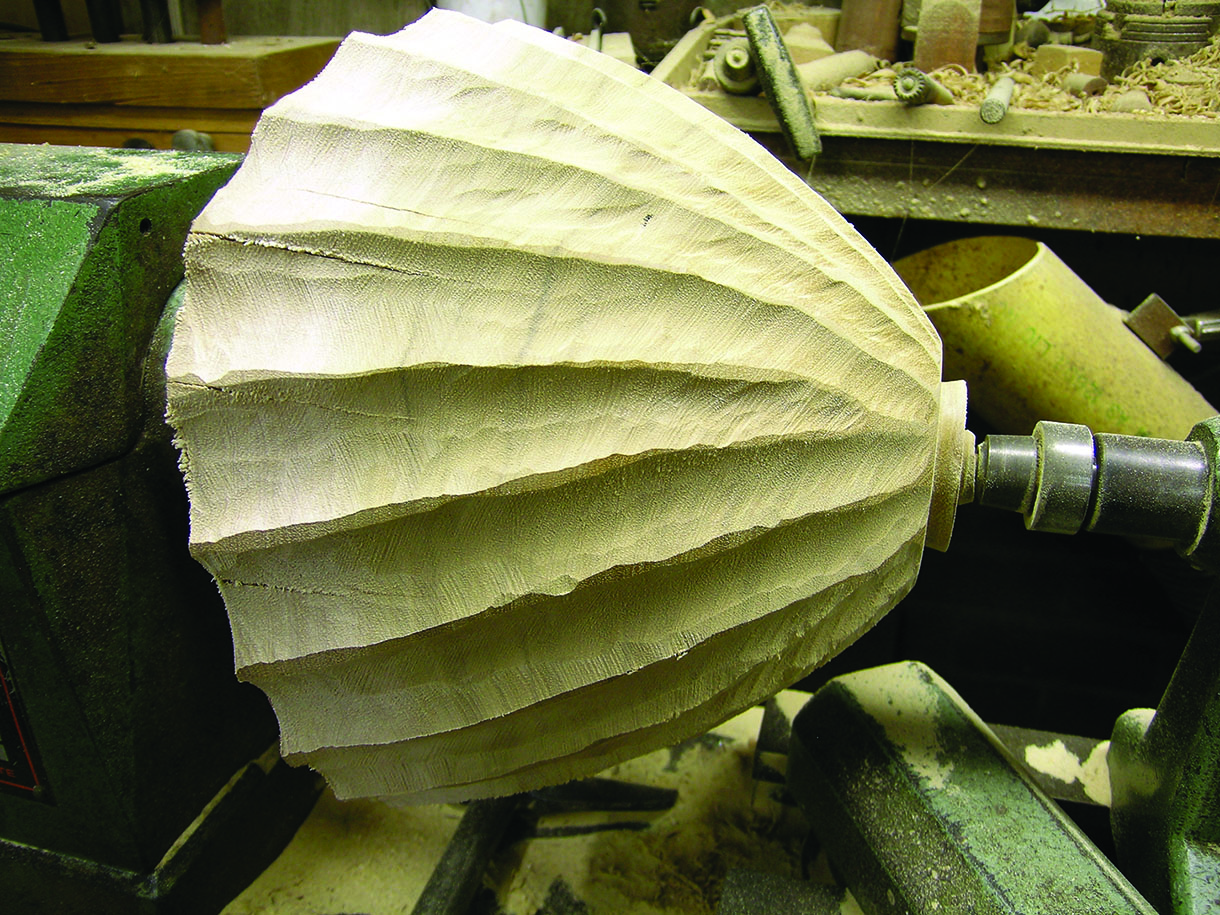 Scorching to create an aged look
WARNING: The next step requires the use of a propane torch. If using one in your workshop, keep an extinguisher handy and have no combustibles other than the item being worked on nearby. Best practice would be to remove the work and burn it outside. I burnt the outer surface of the bowl, paying a little more attention to cracks. I was aiming to ‘soften’ their edges and make them more of a feature than a distraction. It doesn’t hurt to burn some areas more than others as variation of colour can be attractive in this technique. Following the burning of all surfaces, they were wire-brushed to remove scorched timber. I then needed to trim the tenon of the bowl to eliminate stray burns, which would prevent the bowl from running true when gripped in a scroll chuck. 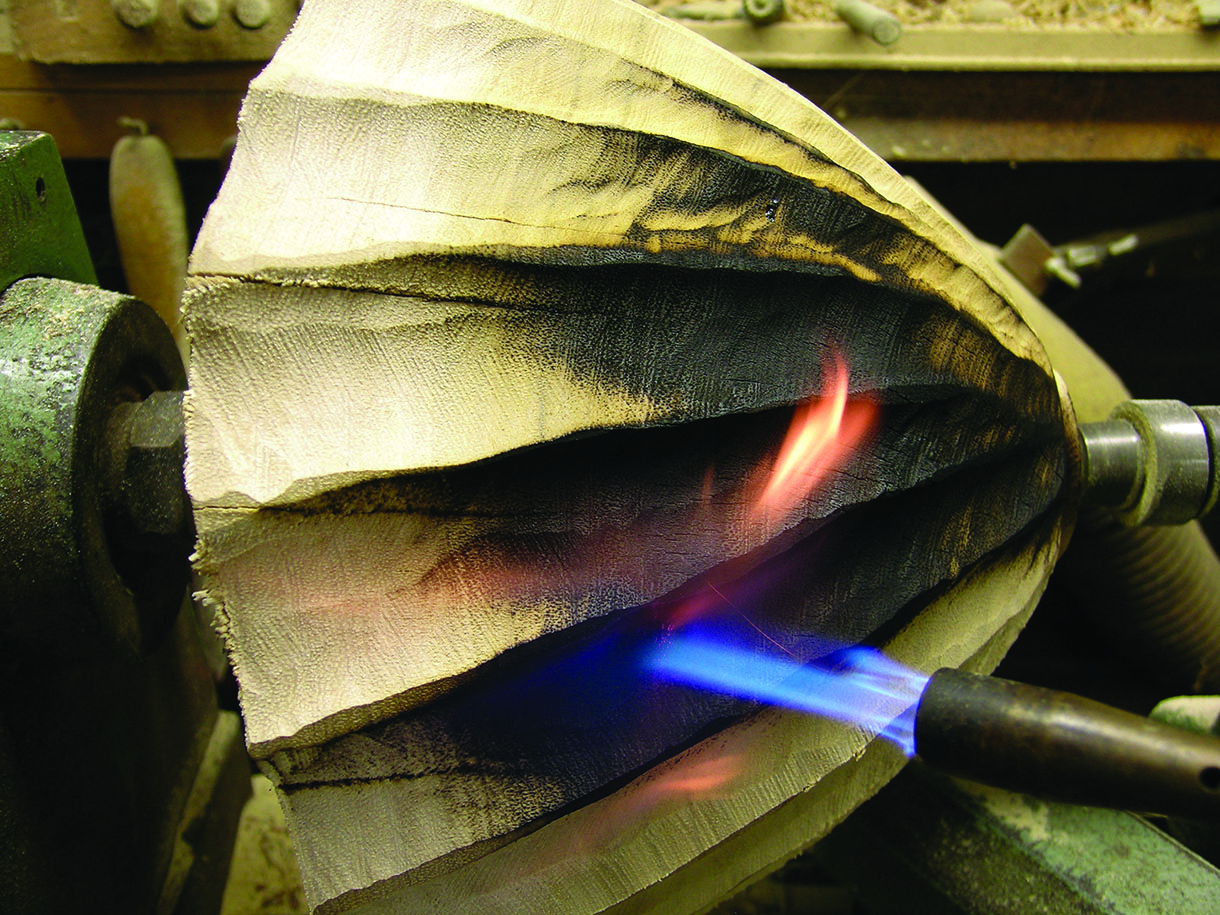 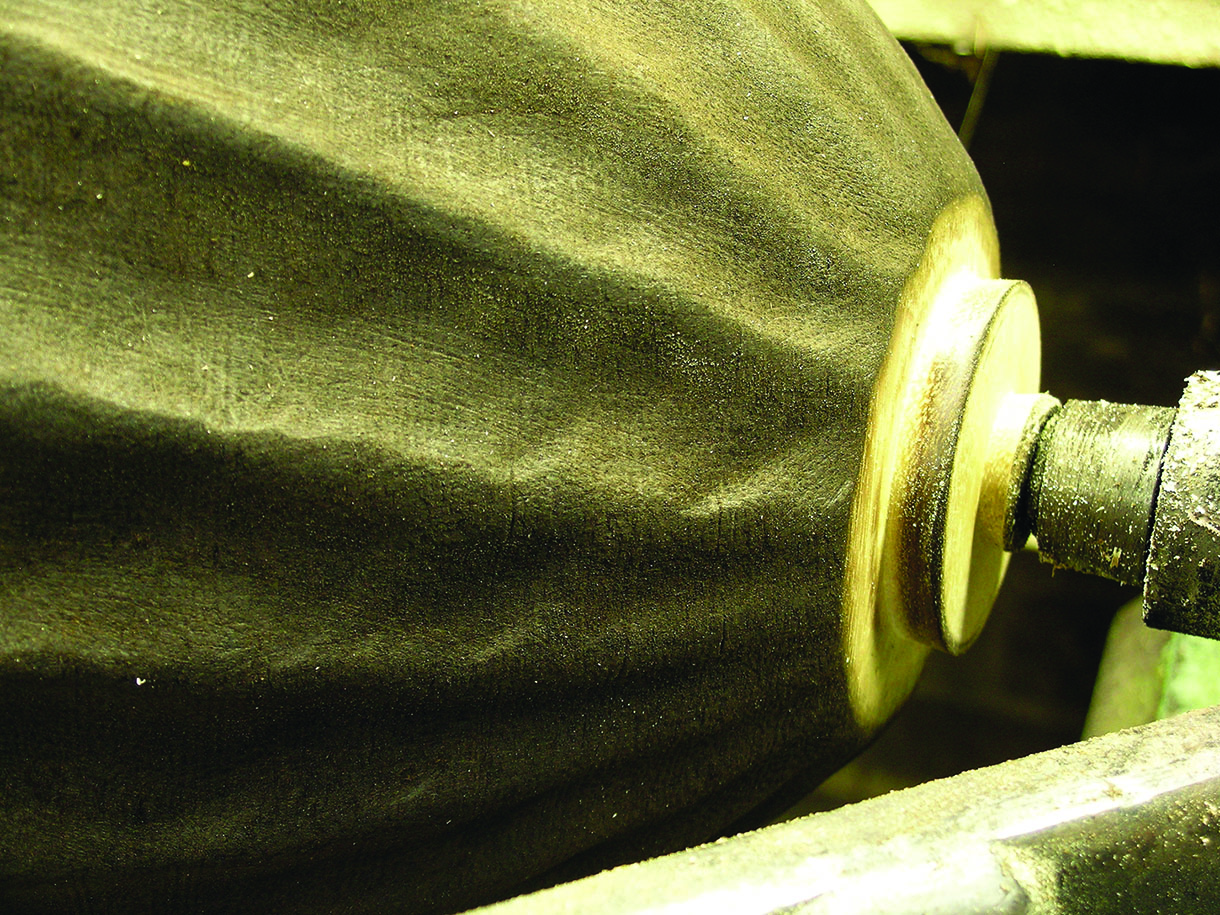 Saving some timber
Reversed and held securely in a scroll chuck, and with the tailstock firmly in place to provide extra support, I removed the core of the blank. I used a Kelton Centre Saver to remove the centre because of the shape of the blank. Other coring systems are available for hemispherically-shaped bowls. I would convert the core into a smaller bowl later. With the core removed, there were several cracks still evident inside the bowl. This wasn’t a problem; it was something I’d expected due to cracking of the original blank. Leaving the walls of the bowl quite thick (about 25mm) would allow the cracks to hold and not explode as I turned the interior, but I would still need to make them a feature rather than a failure. It is possible to stabilise the cracks with cyanoacrylate glue. Wrapping the exterior with electrician’s tape, or any plastic tape, can also help to give stability. However, be sure to reduce lathe speeds accordingly, and always wear facial protection. 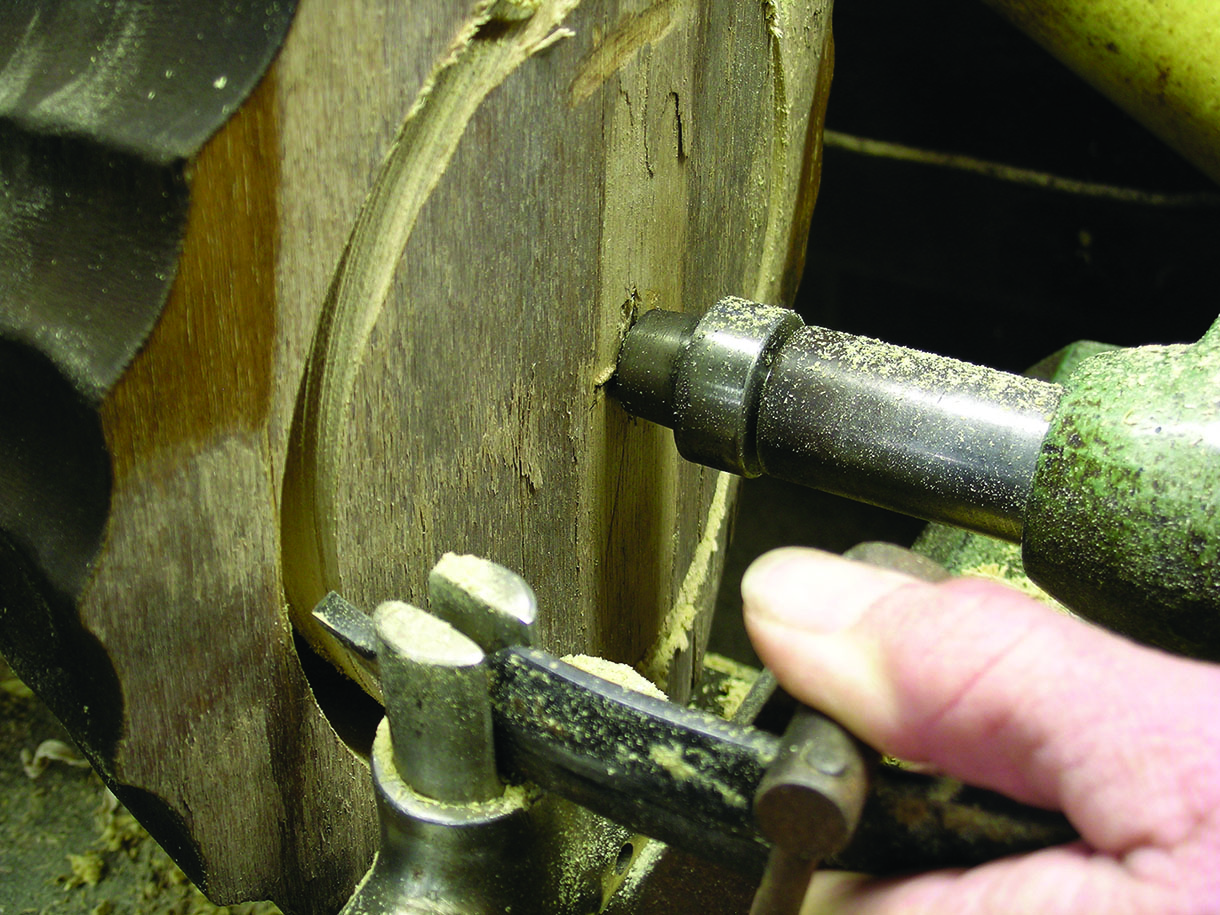 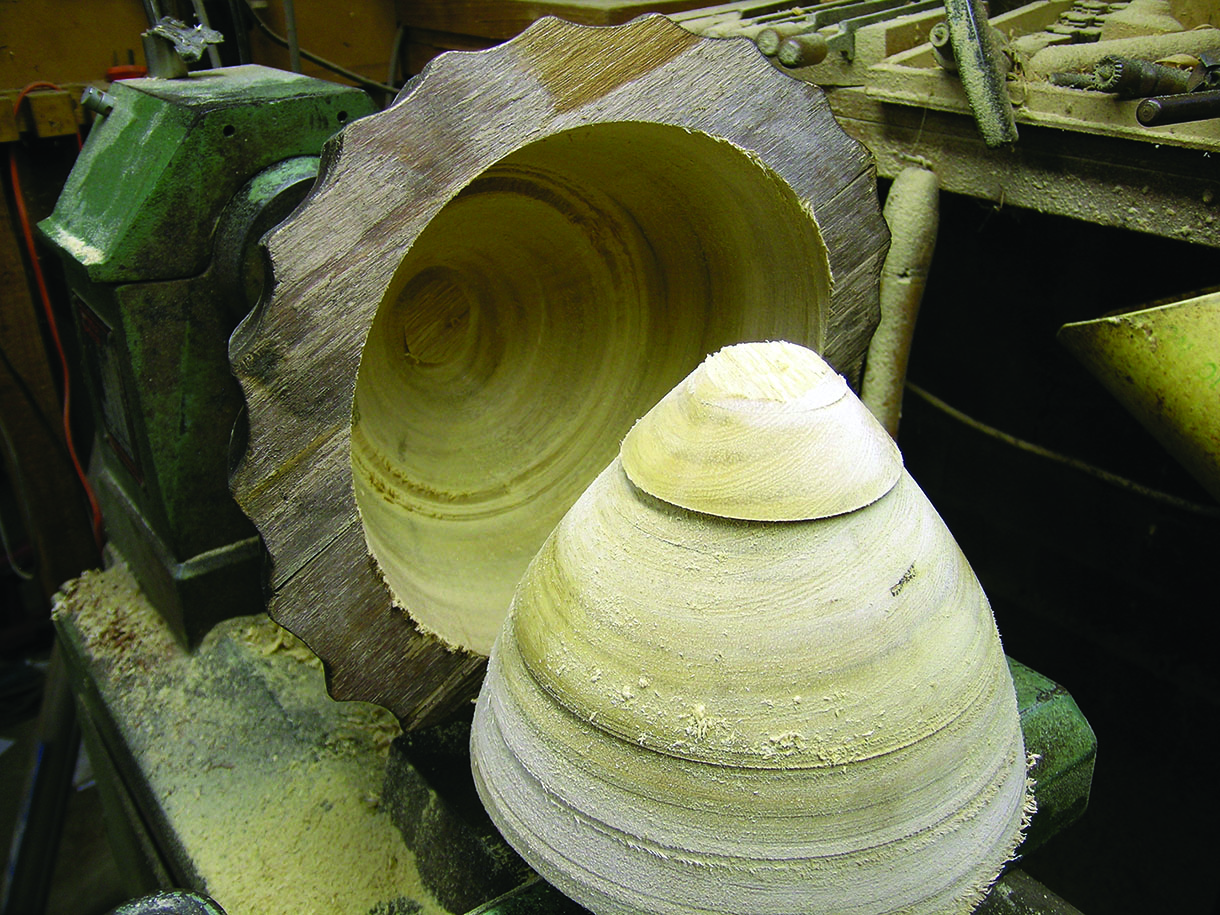 Dealing with internal surfaces
Walls of 25mm would make this a fairly heavy bowl, even after the wood had dried. However, this was intended to be a somewhat hefty item. Once the interior had been hollowed, cracks were burnt to ‘soften’ their final appearance before sanding through to 320 grit. By burning cracks prior to sanding, the eventual effect is one of gradation between a cleanly sanded surface to a scorched effect, with cracked edges losing visual and tactile sharpness. Furthermore, if the bowl distorts after completion, the cracks will still have a pleasant tactile quality, rather than the eye being drawn to a defect in the bowl. 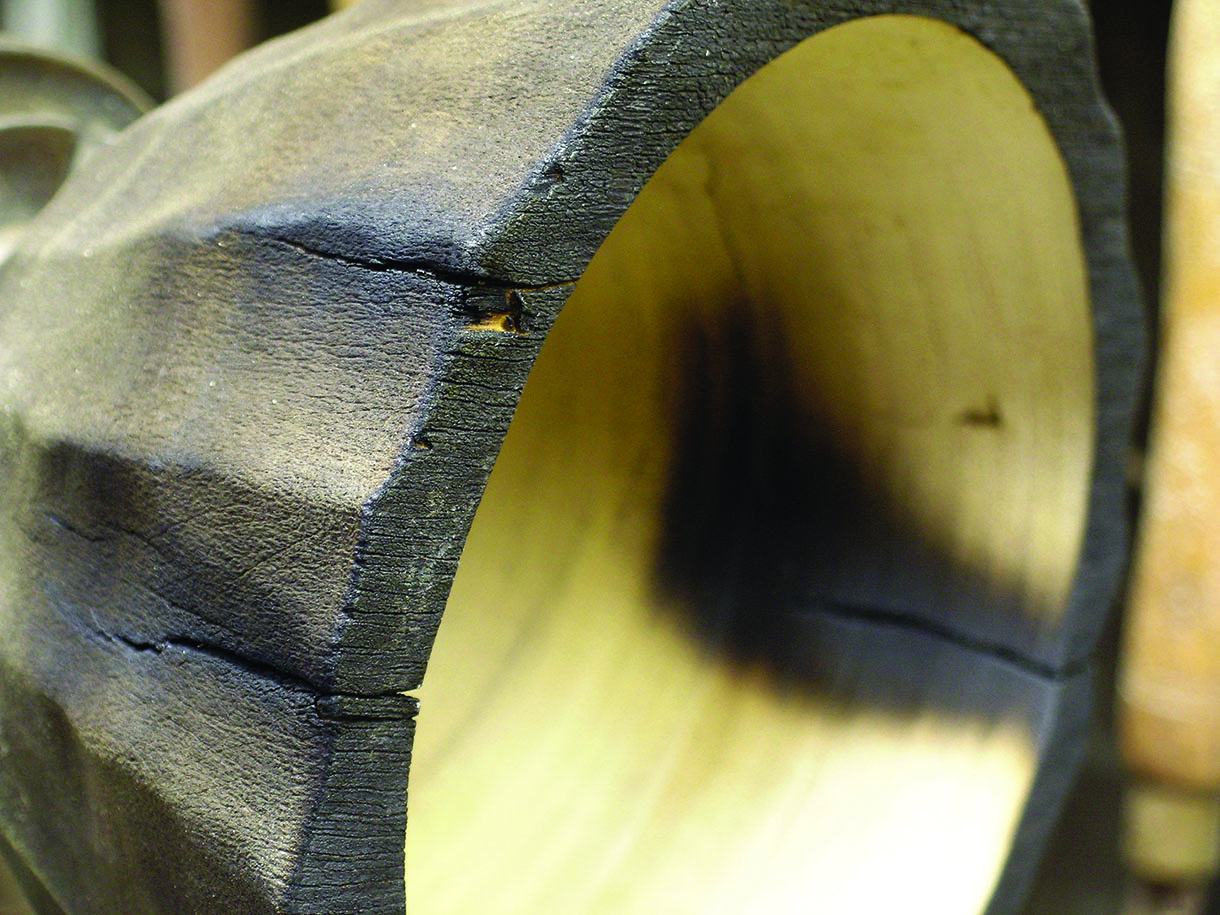 Reverse turning to clean up the base
To finish the bowl, I only needed to reverse it. This is a simple process in a turner’s book of tricks, but there are so many ways to do it. My own techniques in reverse turning continue to evolve and then I go back to methods I used years ago. In reality, there is no perfect way of doing anything; use the technique best suited to your skills and the equipment you have available. Don’t be shy of trying something new. It may just be the trick you’ve been looking for.
Due to the uneven nature of a wane-edged bowl, it isn’t possible to hold it with any configuration of chuck jaws. Therefore, I generally reverse natural-edged bowls onto a carrier gripped within my scroll chuck
(see photo below) that fits inside the bowl. This is padded with a non-slip mat and supported with the tailstock. For this project, I chose to use an inflated sanding drum fitted to the spindle of my lathe. This wouldn’t leave any marks on the interior of the bowl.  This drum is a hand-me-down and not necessarily the best tool and method, but I use what I have available. Just be sure that everything is firmly attached and you’re using an appropriate speed.
With the bowl firmly secured, I could now turn away most of the tenon, undercut the base and sand it as much as possible. I then nipped off the stub, scraped the surface even and hand sanded it, ready for drying and finishing. 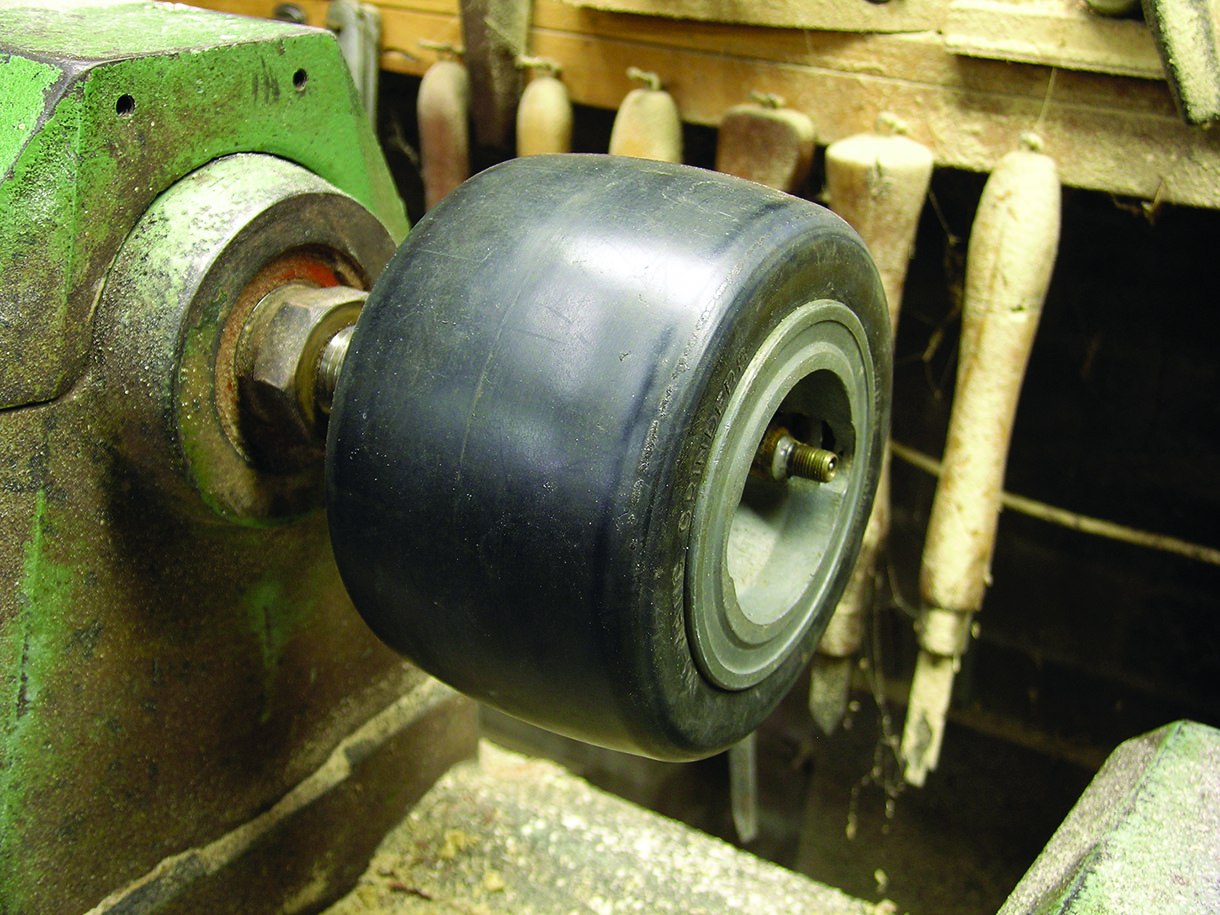 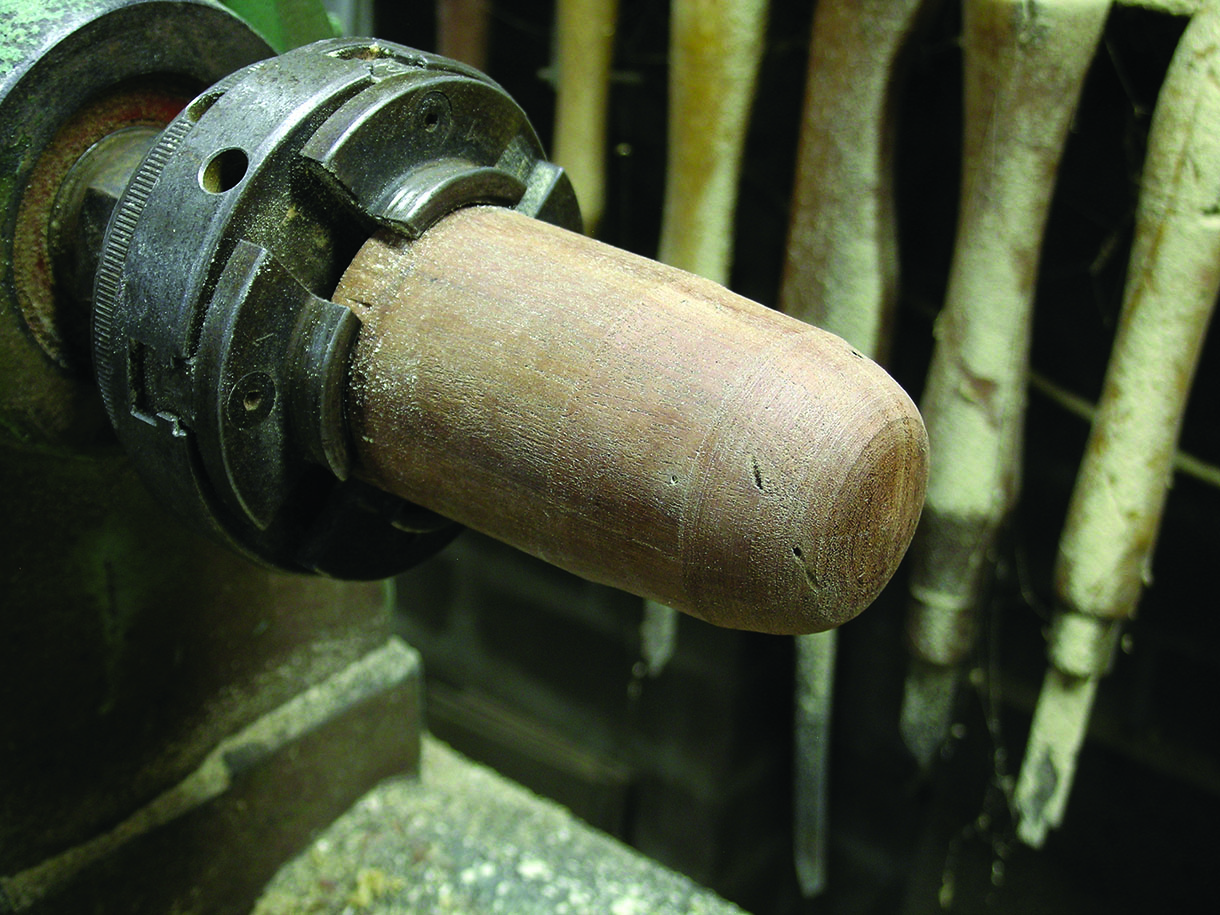 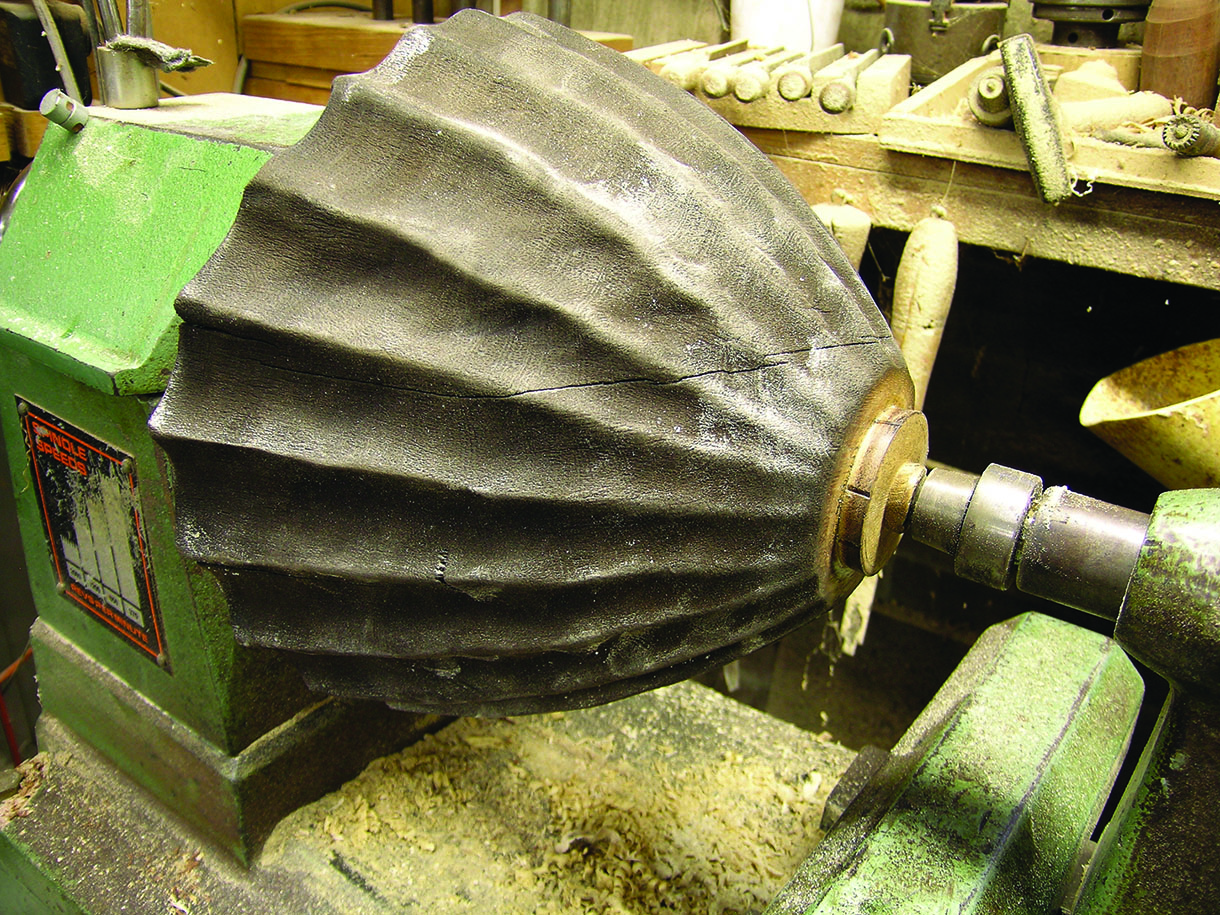 Turning away from disaster
The smaller bowl was then transferred to a scroll chuck for hollowing and I followed the same process of turning and ‘carving’ the exterior. However, this is where the hiccup arrived. I had a catch and the bowl tore away from its base… there could have been tears (well it was mostly swearing) before some lateral thinking salvaged this wood yet again.
As I had a large step already turned inside the bowl, I decided to turn a carrier large enough to press into the step which would fitted to my scroll chuck. With the tailstock pressed into what I figured was the centre of the torn off stub, I was able turn a new tenon, but this made the base of the bowl too broad. I trimmed the base down, which also cut into the ‘carved’ section.
More ‘carving’, burning and wire-brushing completed the exterior of the bowl prior to final hollowing. I then proudly sanded and completed a second bowl, resurrected twice from wood that may well have ended up on the firewood pile. 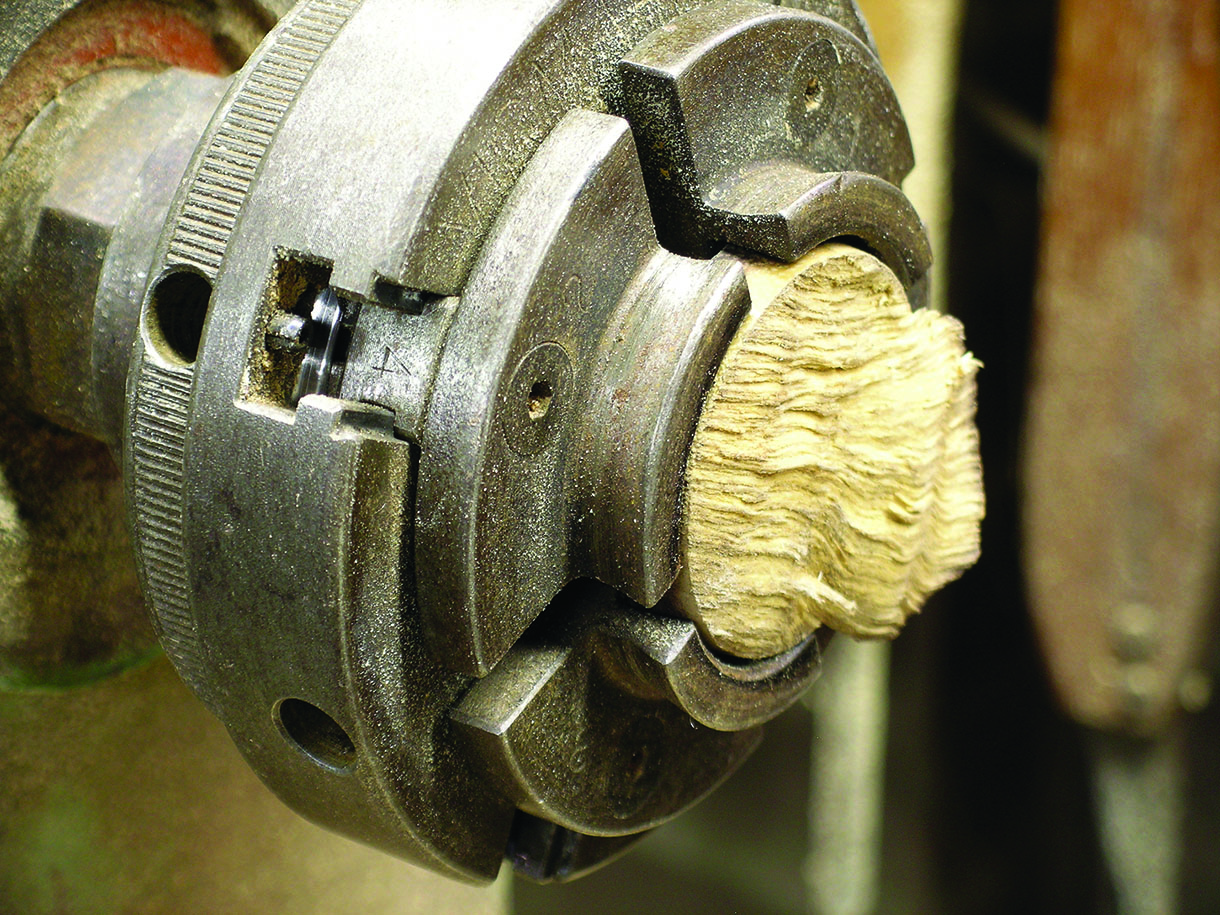 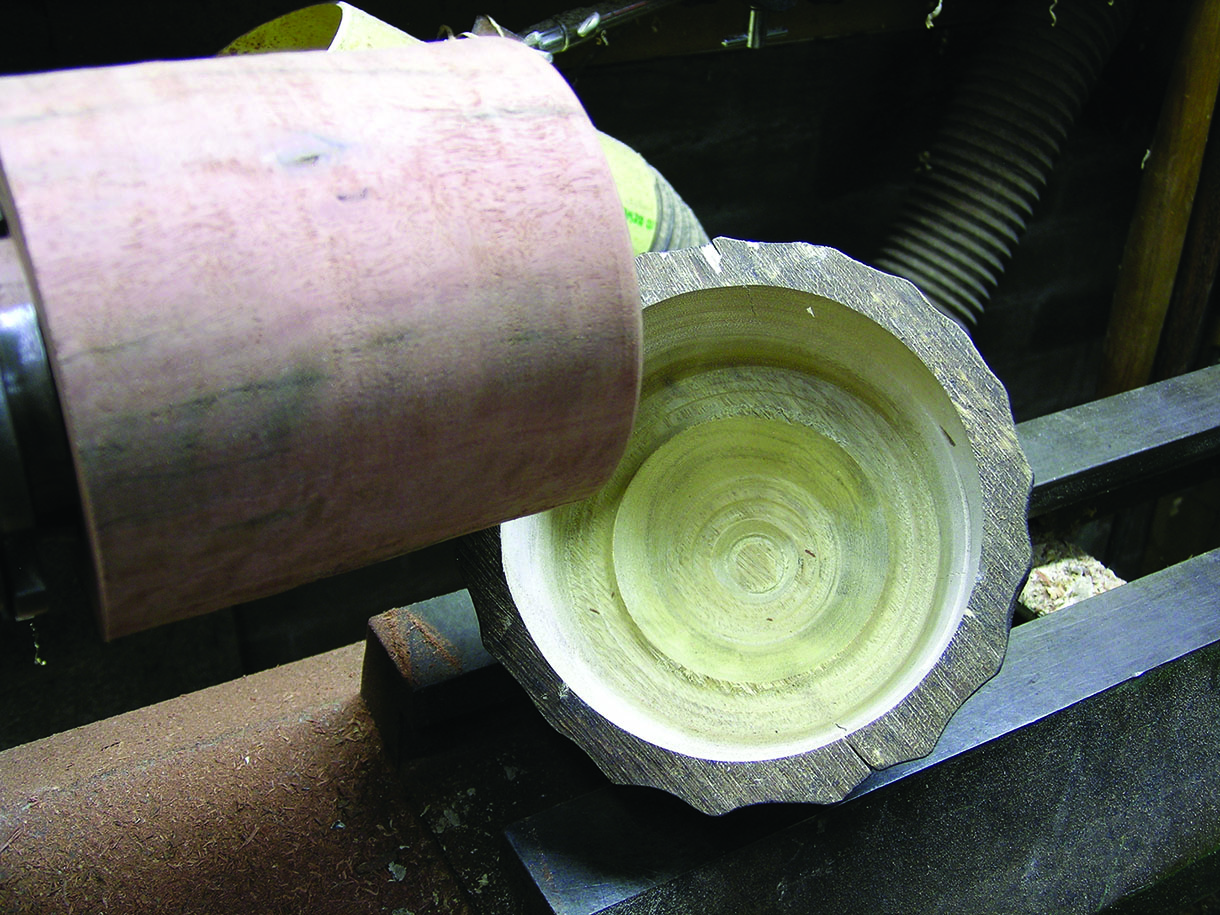 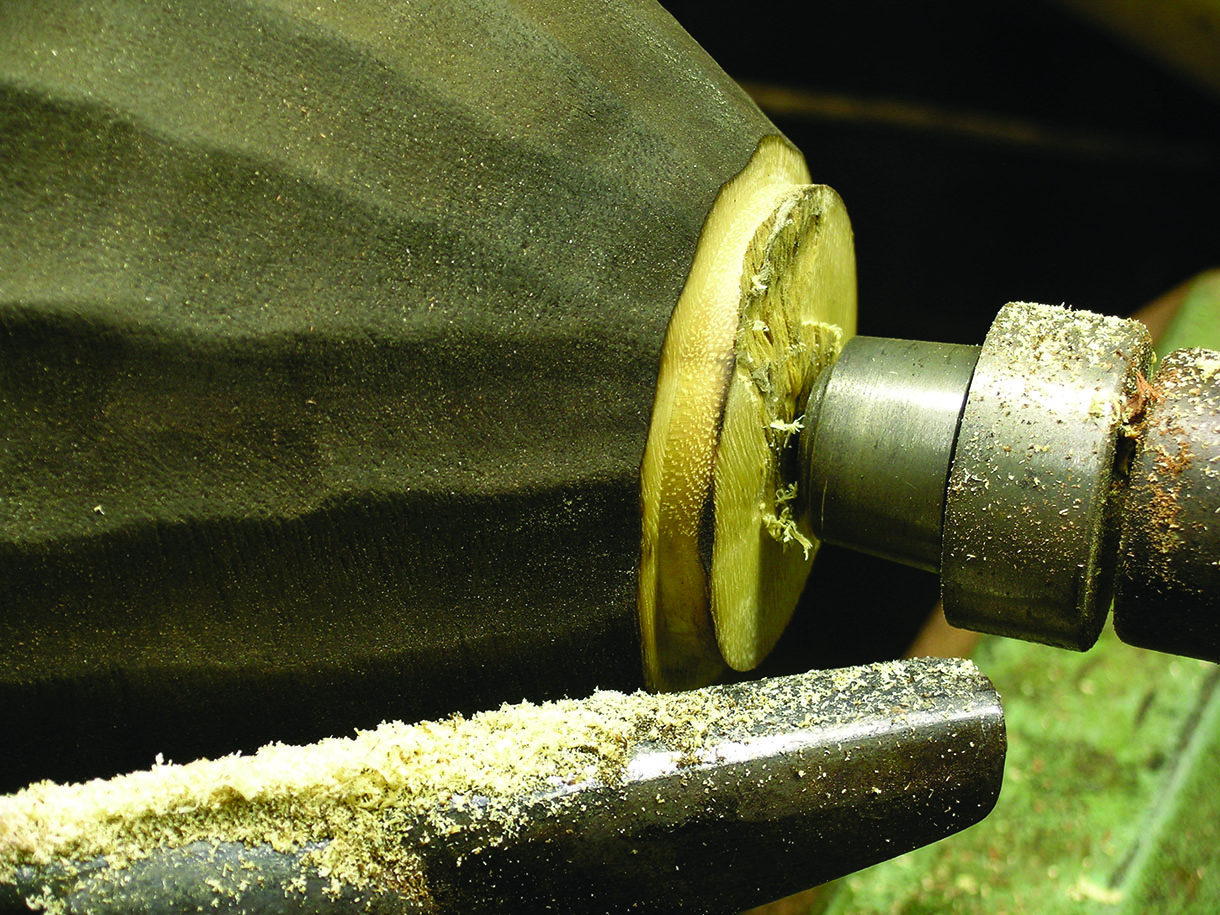 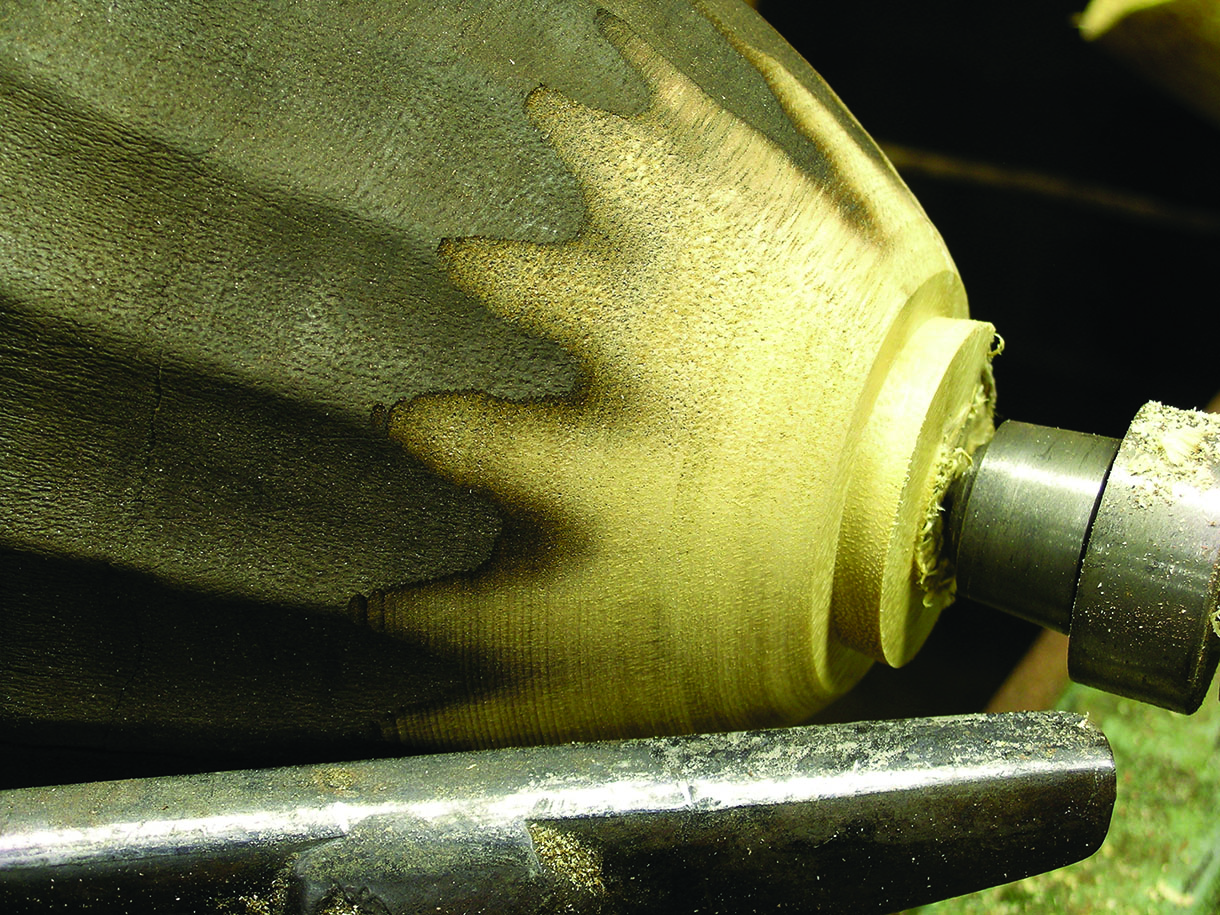 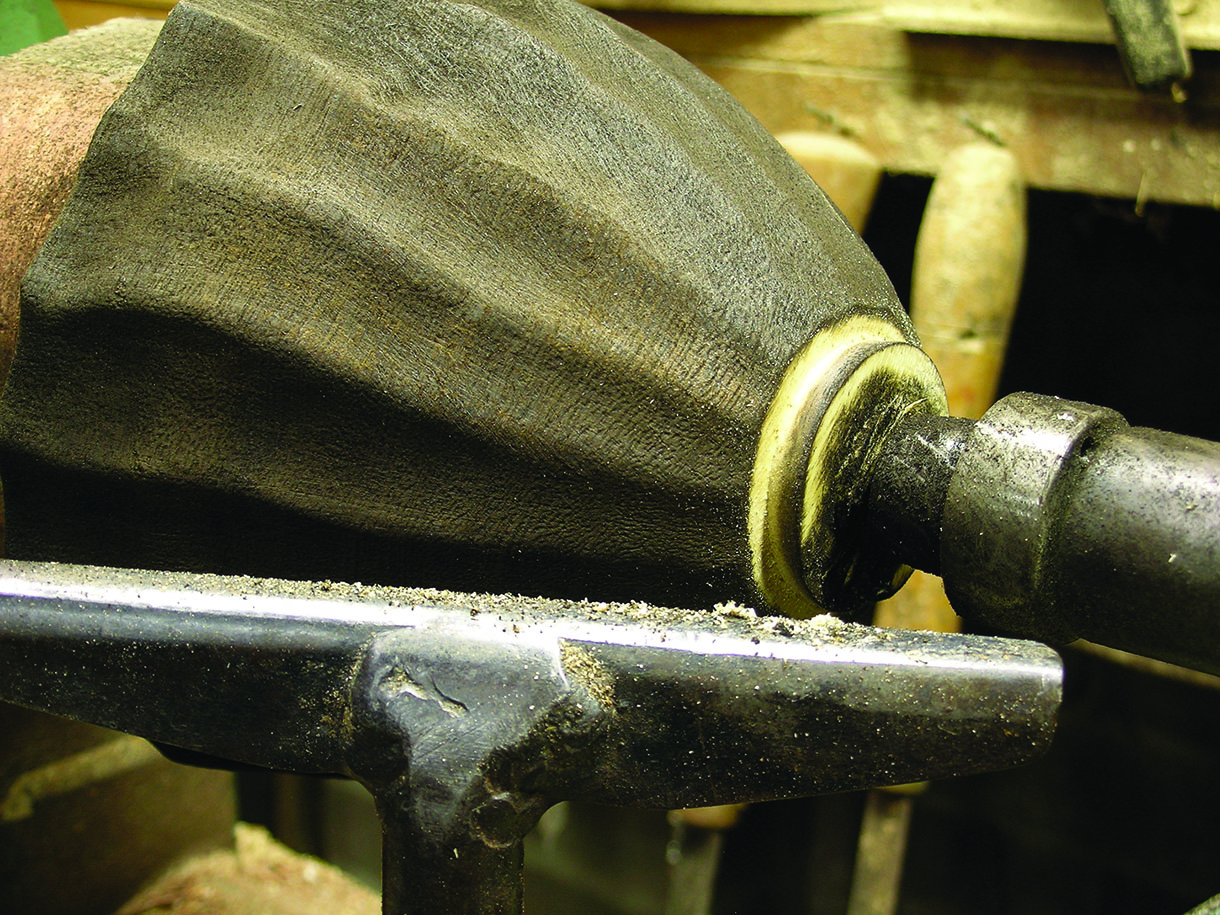 Handy hints
1. Be willing to try new techniques; they may develop into great new developments in your work
2. Don’t give up, even if your timber seems beyond redemption. If the experiment at salvaging the wood fails, you’ll still learn something in the process
3. Beware of loose pieces of wood that may dislodge during turning. Secure pieces with glue or apply plastic electrician’s tape around the outside and change to a lower speed
4. Always wear a protective face shield! Safety glasses will protect your eyes, but not the rest of your face
5. There are many ways to texture wood; see what works best for you
6. Paint could be used to highlight areas of the bowl. Cracks could become an even greater feature if painted