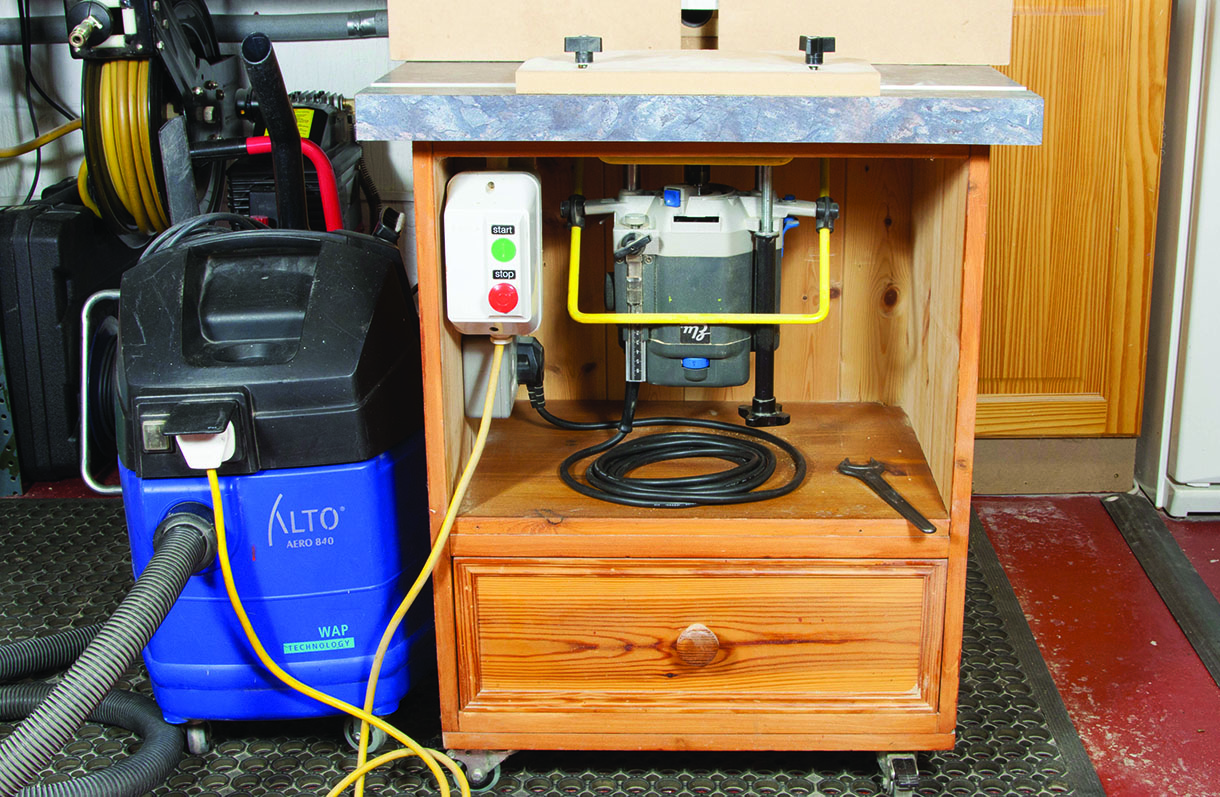 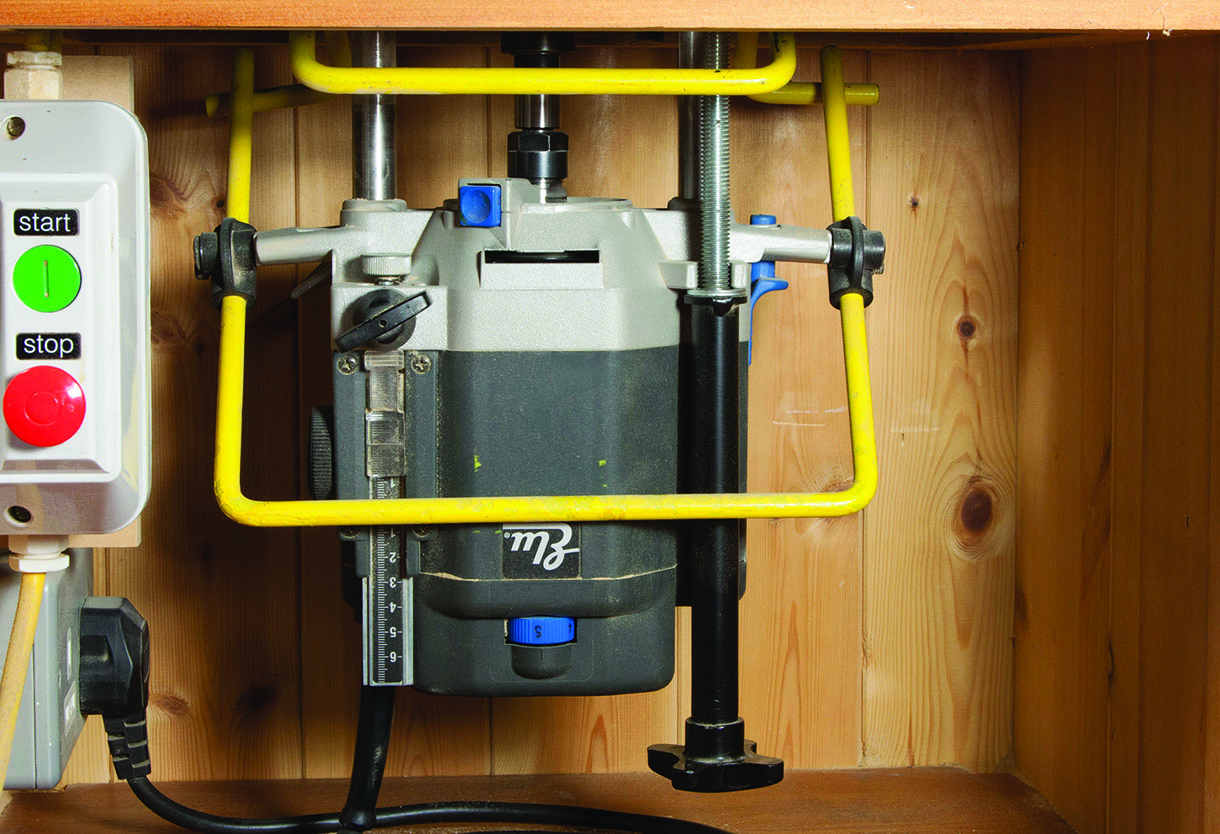 The plunge bars and fine adjuster worked well enough, but were inconvenient to use

Over the years I must have read hundreds of descriptions of home-made router tables and looked with envy at the elaborate proprietary offerings available, some – once the cost of the router itself is added – costing nearly as much as a small spindle moulder. Many of these, both made and purchased, claim to be the ‘ultimate’ router table, but for me the ultimate router table is the one that does the job I want it to do. For that reason, my router tables have evolved over the years to suit a diverse range of uses and this article traces the development of my current table, which draws ideas from many sources. I do not claim that it is the ultimate, but it suits my purpose well enough and I hope it will give you some ideas for your own table or even inspire you to improve upon it.

My first router table was made from 18mm plywood with a metal insert. The insert, like many others, had a set of rings to vary the hole size to suit the cutter and for a while this was fine, but when the day came that I needed to use a large panel moulding cutter the limitations became all too apparent. This led to the rapid development of a table with a larger insert set into an offcut of kitchen worktop mounted on a base that had once been a bedside cabinet. This ‘temporary’ arrangement lasted for about ten years and was the table I used for my machinery series article in Woodworking Plans & Projects.
This table, however, had some major shortcomings. The insert was deliberately designed by the manufacturer with a camber that was supposed to counter the bending caused by the weight of the router and thus result in a flat surface. It did not achieve this well and while it was fine for many tasks, anything involving fine accuracy was more problematic. The router was attached to the plate with setscrews and it was quite a performance to remove it from under the table and the adjustment was by means of plunge bars and the machine’s own fine adjuster from under the table. Something better was called for.

Improvements
I decided to stick with the ‘bedside cabinet’ base as this was quite robust, but fitted a larger top that was hinged to give better access to the router. The top was made of two layers of MDF, a base layer 18mm thick into which the router was inset and a 10mm top surface in three sections. I considered a laminate surface, but decided that wood slides well enough on MDF, so why go to the extra effort and expense. The centre section of the top consisted of interchangeable full length inserts with different sized holes to suit various sizes of cutter. These had the great advantage over the previous insert in that they were flat and thus cuts could be made with greater accuracy. A length of t-track was also installed for feather boards and jigs.
The router was fitted to the base using its own fence bars, an idea I freely admit to copying from another table I had seen somewhere, but cannot remember where. This makes fitting or removing the machine from the table much less of a chore.
The final improvement at this stage was the installation of a Router Raizer lifting mechanism to enable adjustment from above the table. Much more elaborate and expensive router raising devices are available, but this suited my purpose and budget admirably. Fitting involved some dismantling of the router but the instructions were well written and easy to follow. The installation of the raising mechanism also allowed me to remove the plunge bars which I never much liked for out-of-table use and revert to the standard handles. I am sure that some people find the plunge bar design convenient, but I find that with the addition of the fine adjustment that is possible with the Router Raizer, the original handles suit my methods of working much better.
Although the router base is partly inset into the underside of the table, the thickness of the table means that a collet extender is needed with some cutters. This also greatly facilitates cutter changing which can often now be done from above the table. 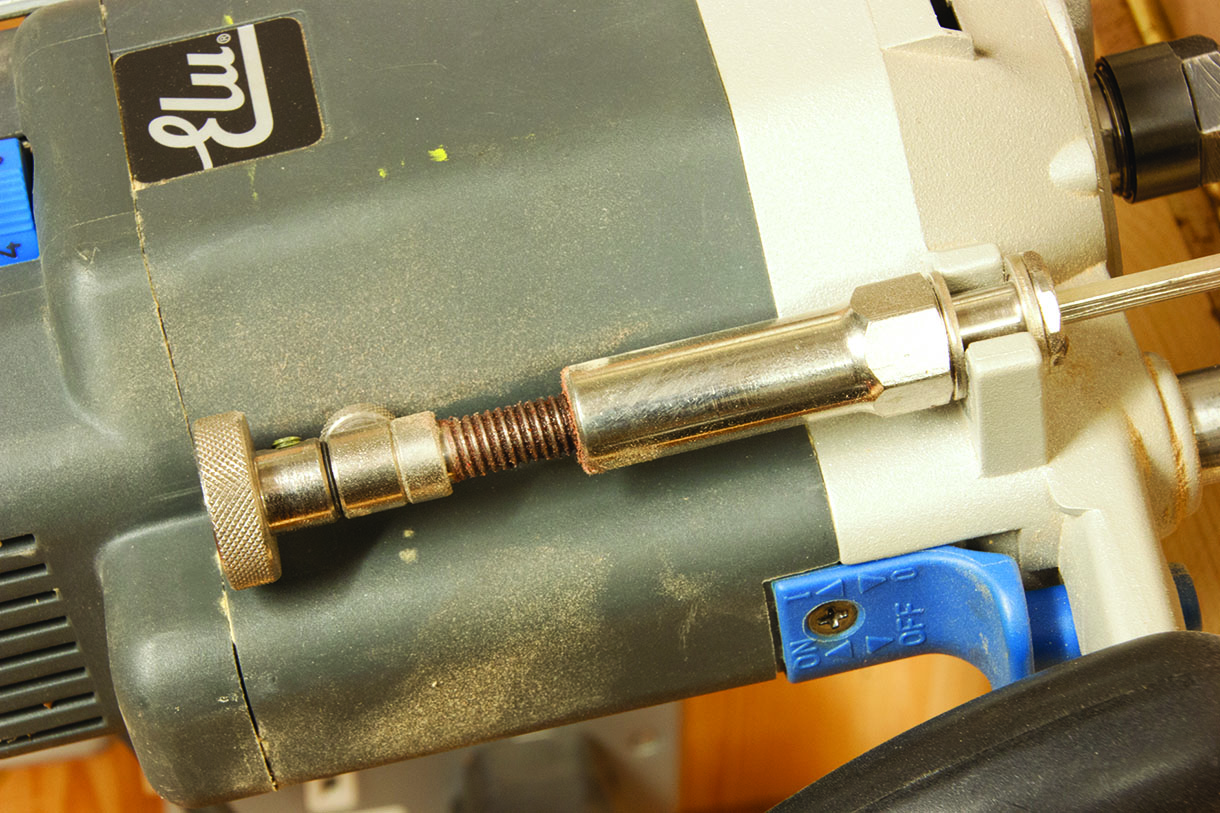 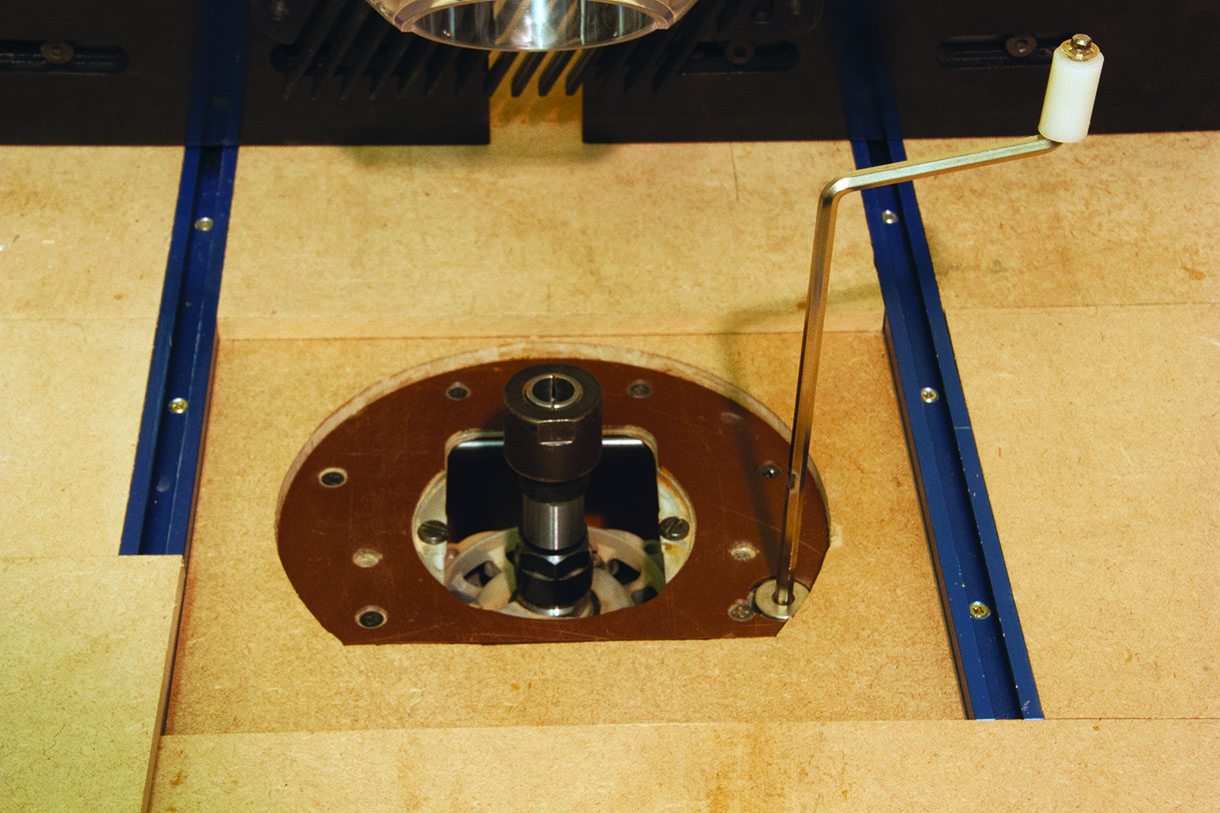 A collet extended allows bit changing from above the table 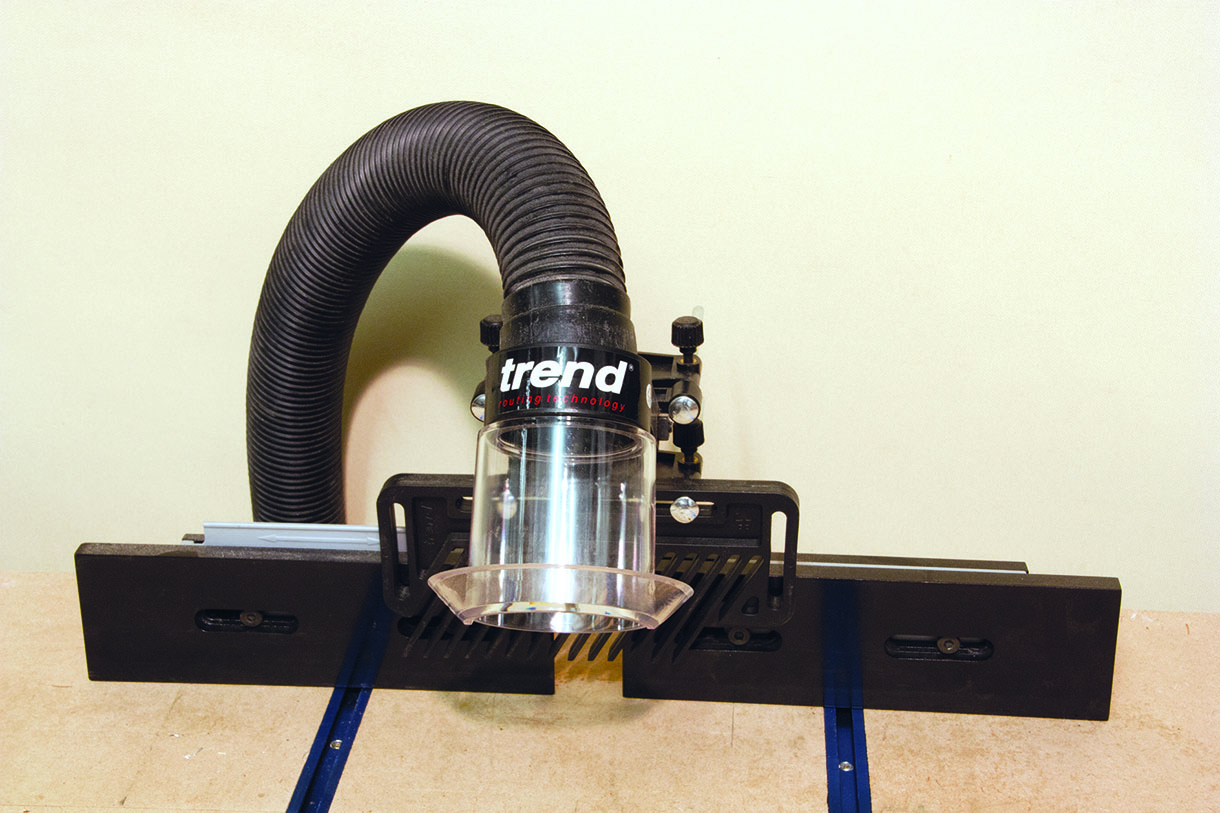 T-tracks were installed for the new fence 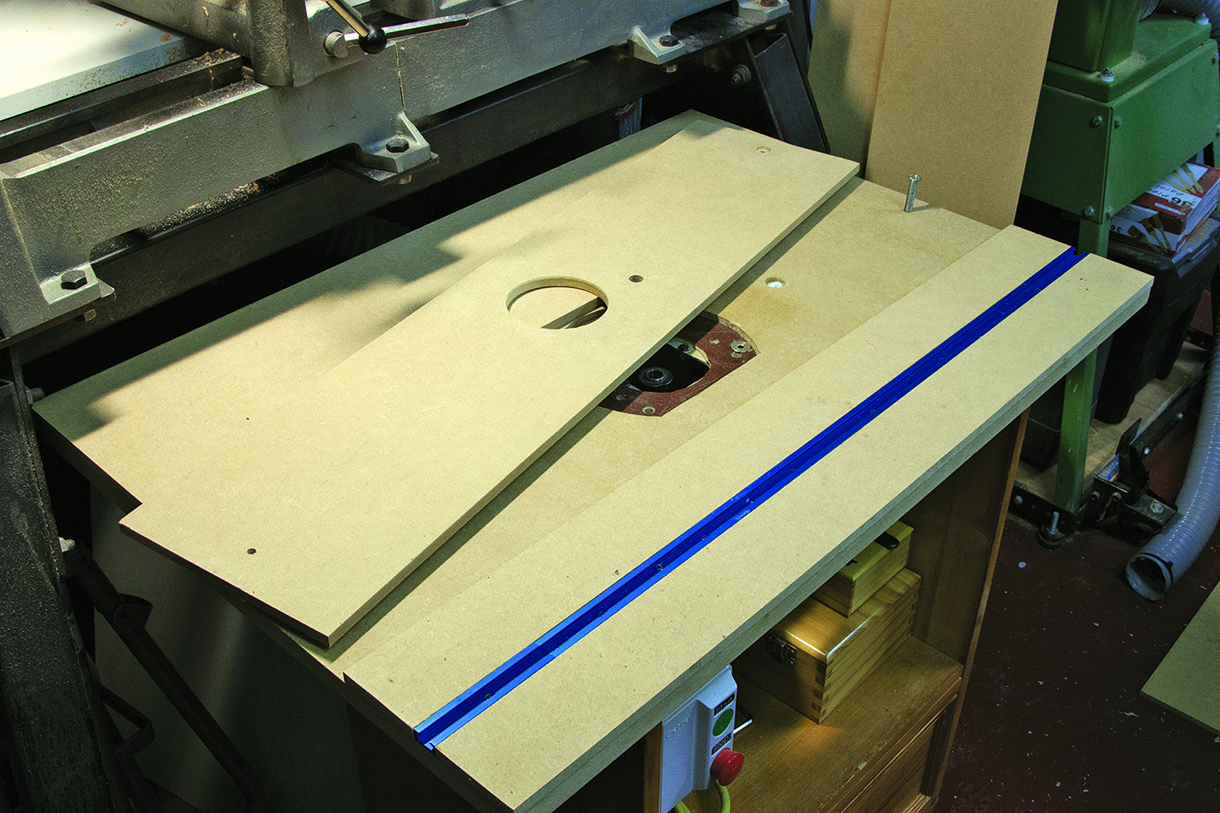 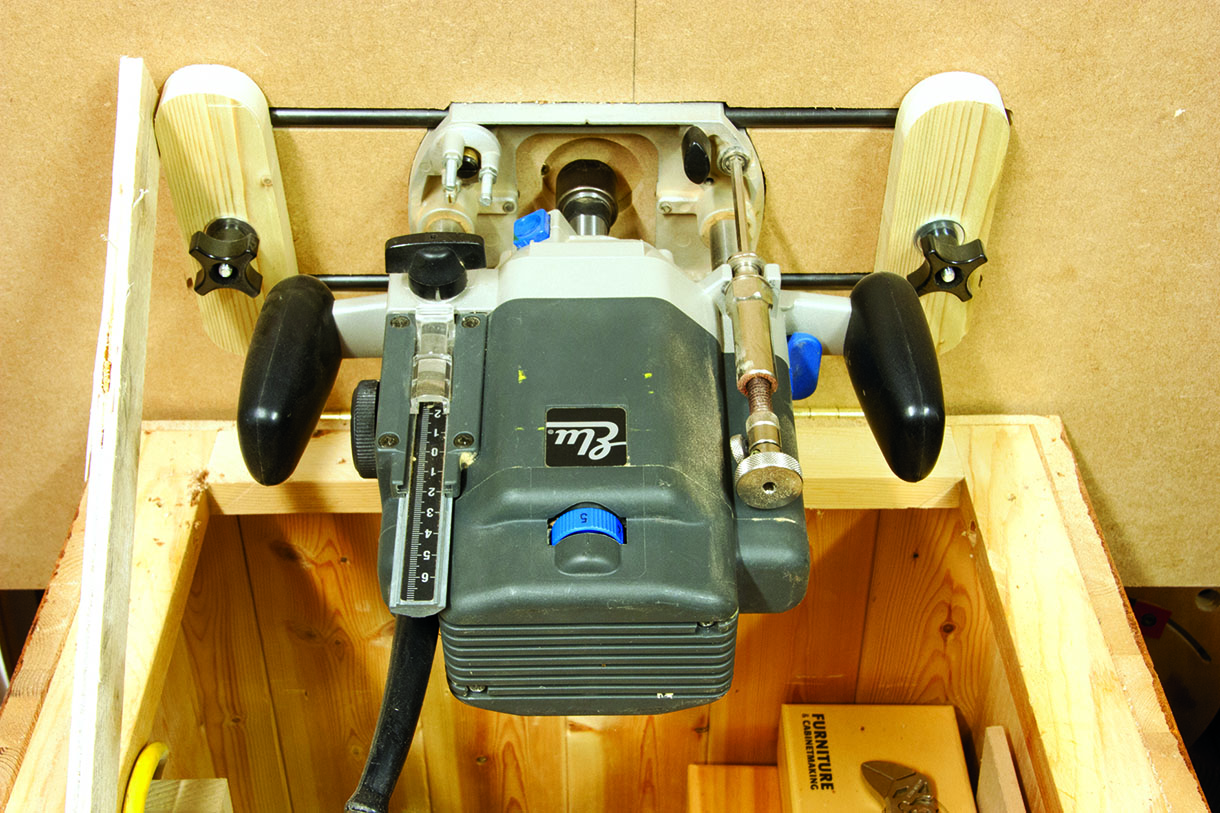 Router fence
My plan was to design and build a fence to replace the basic one I had been using with the original table, but this idea was sidelined when, at the Harrogate Woodworking and Power Tool Show, Trend were selling off the fences from a discontinued router table for £15, an offer I couldn’t resist. The fence is small in relation to the table, but has an adjustable outfeed fence, hold-down fingers and extraction port, so it is deal for small accurate work while the original fence remains in
use for larger pieces.
The installation of this fence required a rethink of the means of fixing the fence to the table. The old fence was simply held in place with clamps as required, but the shorter length of the Trend fence meant that t-track runners were required. This, in turn, resulted in the abandonment of the full length insert concept. The inserts being cut down to fit between the runners and the outer sections fixed permanently in place. The use of bearing guided cutters for edge mouldings, etc. is facilitated by the drilling of holes in
the inserts to locate a lead in post. 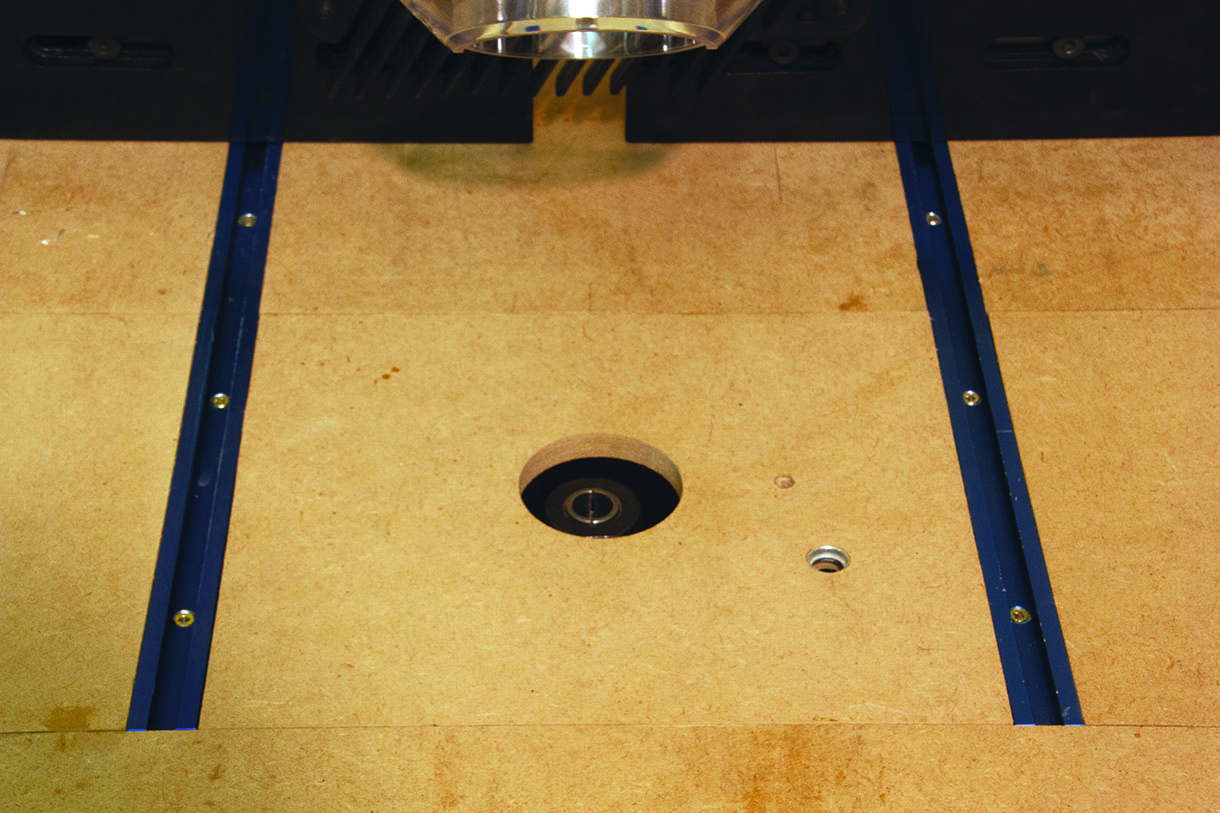 The fence t-tracks meant that smaller inserts were required 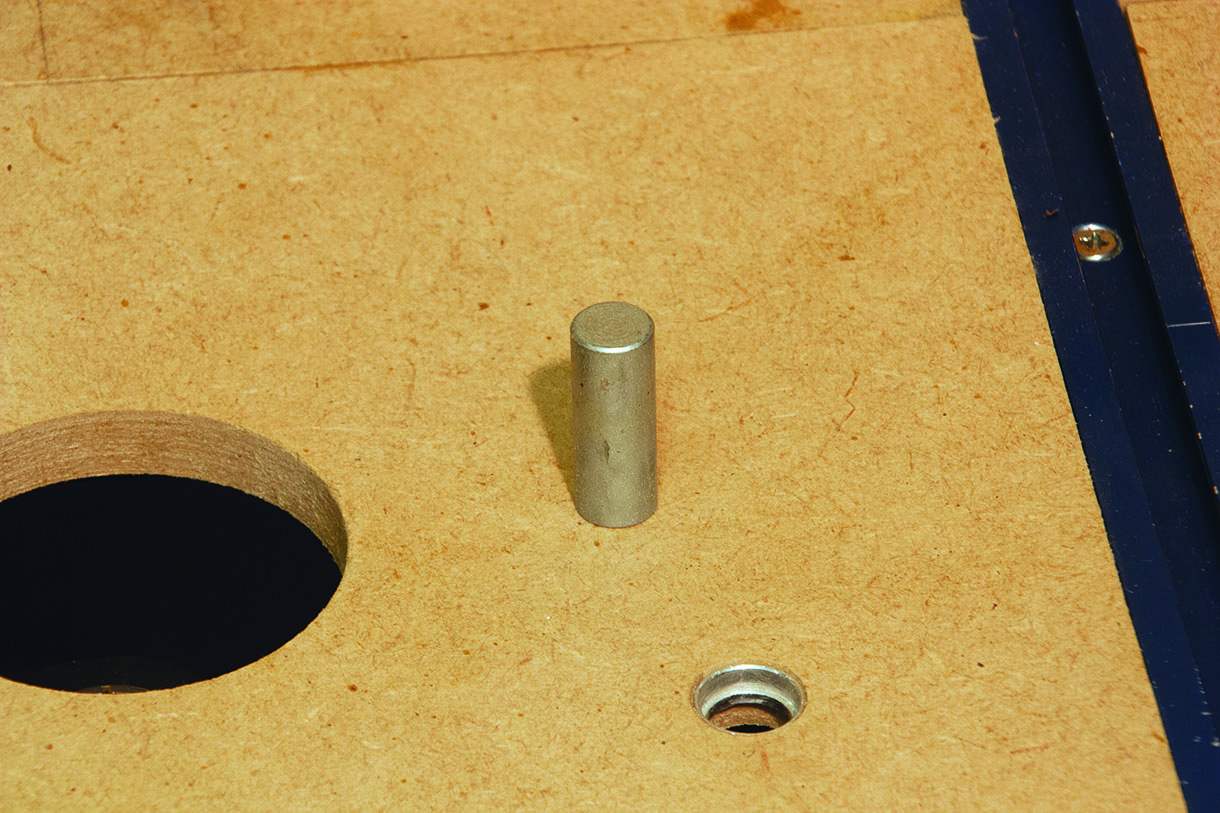 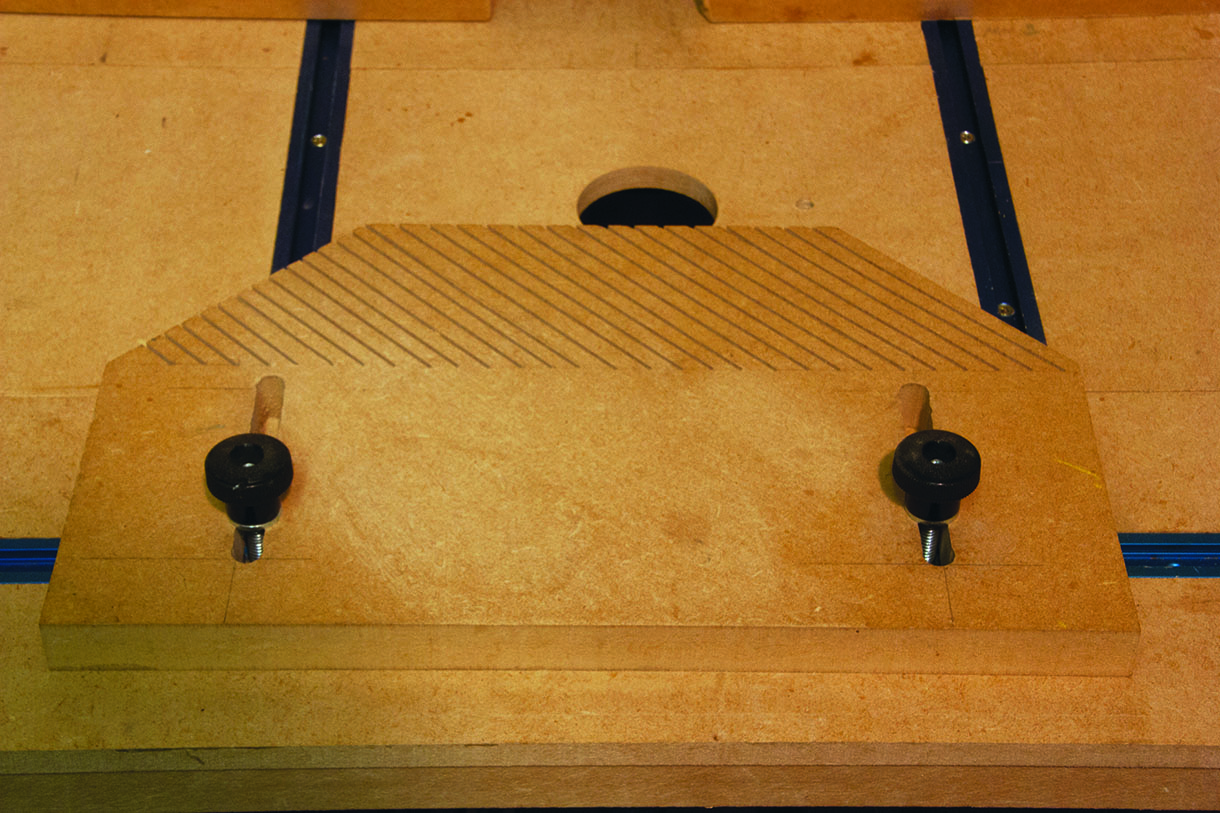 A feather board was made from 18mm MDF

The addition of a home-made MDF feather board completes the current setup. I do not imagine for one moment that this is the final iteration in the development of my router table, but for now I have a tool that fulfils my current needs and thus fulfils my definition of ‘ultimate’ for the time being at least.