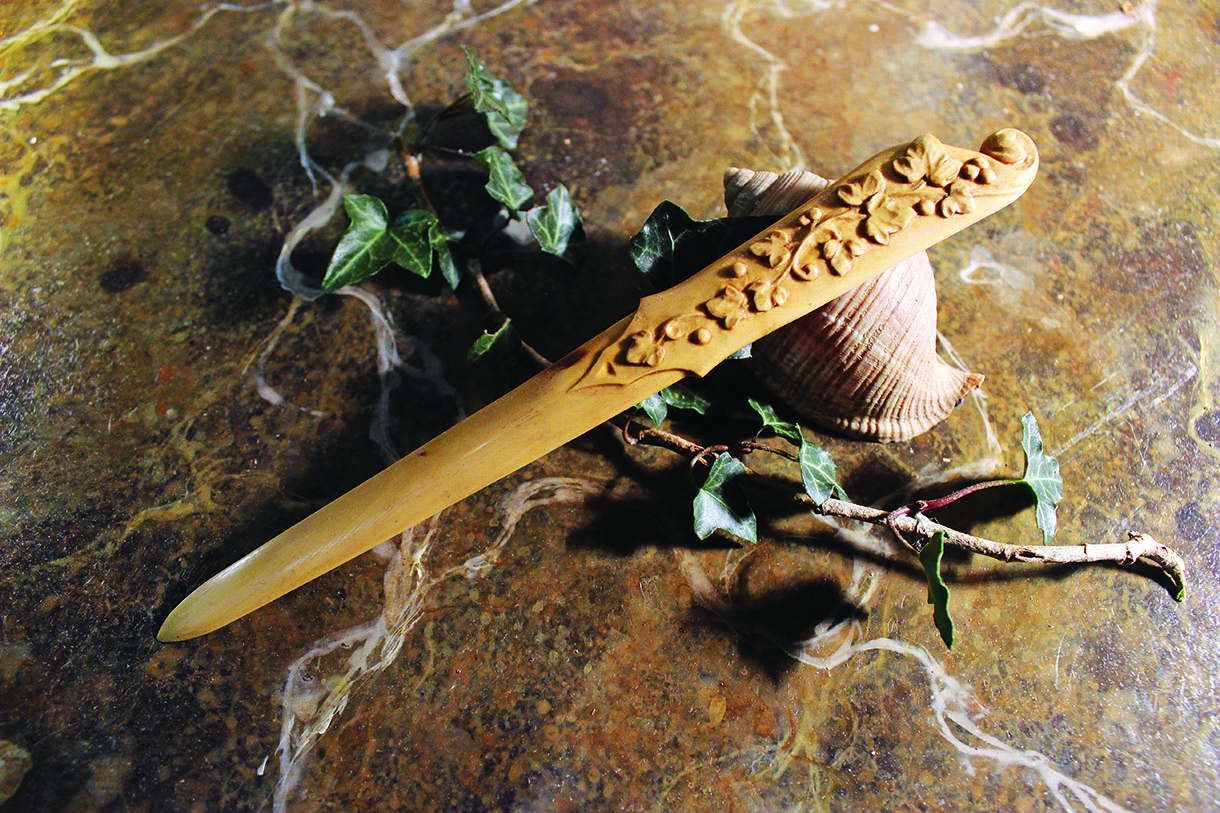 Johan Roudy adds a 1900s-style flourish to a paper knife

Flourishing from the late 19th to the early 20th century, the Art Nouveau style was probably as brief as it was inventive. Inspired by nature and Japanese art, it broke with past European styles. Its popularity spread rapidly in every field of art and craftsmanship, from architecture to furniture, painting, clothes, decoration, etc.
I designed this letter opener in the spirit of the period, with feminine flowing curves and ivy leaves running along the handle. This project will challenge your skills of precision and cleanliness. The ivy leaves are about 1mm thick. There is little wood to remove, so each cut must be made with care. I chose a piece of boxwood (Buxus sempervirens), a lovely hard wood with a close grain, which is able to hold very fine details… and it is so pleasant to carve.
The thing I like about carving at such a small scale is that your eye catches the overall design at a glance. Bare-bones cuts will be more likely done with a single gesture, which leads to a good understanding of the shapes. I’m convinced that you will profit from this project when you go back to carving at a larger size. 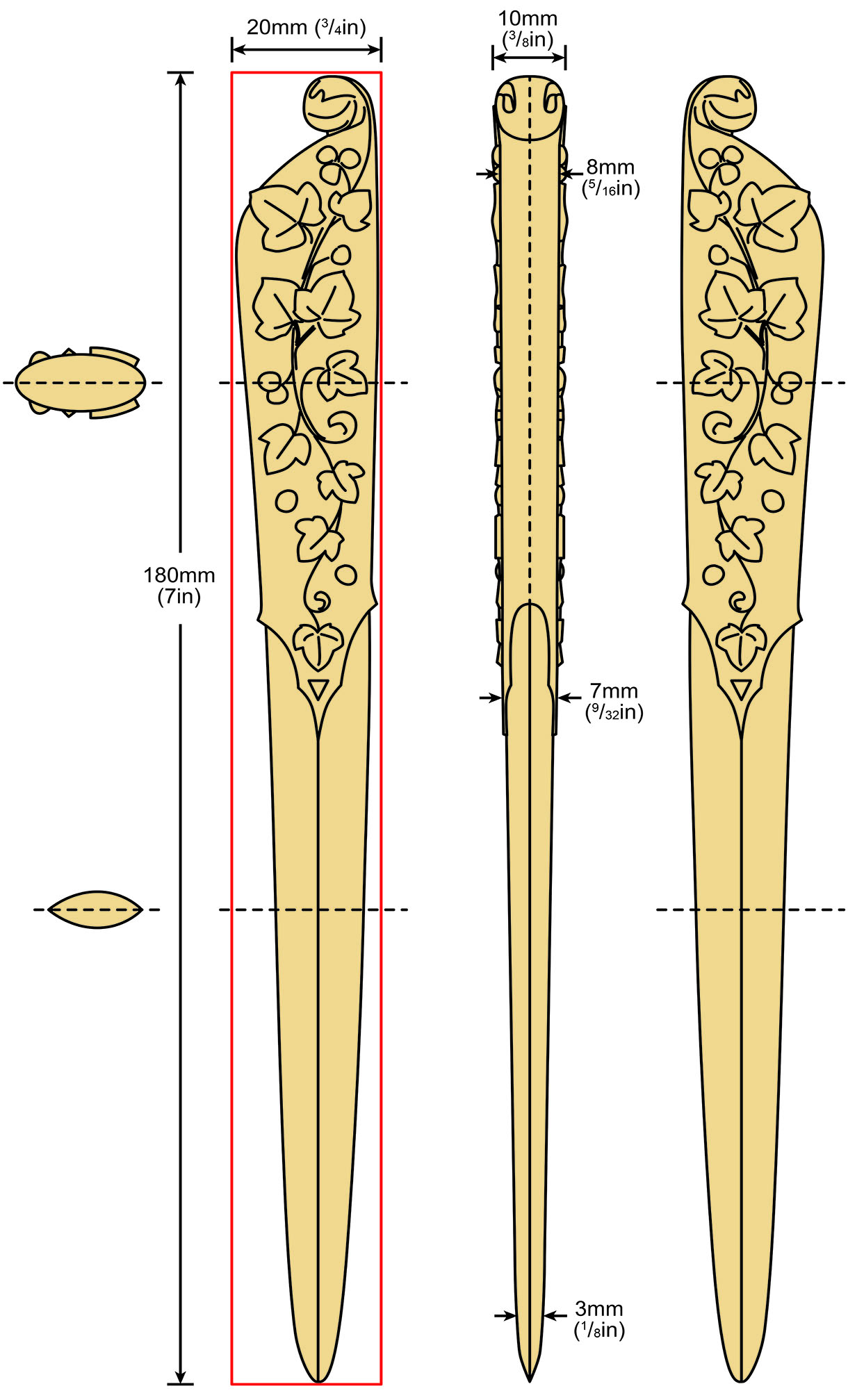 Handy hint
A glancing light will help you to see your work better and will highlight any mistakes, especially in the background.  A desk lamp with an adjustable arm and head is very handy for changing the light direction as needed.

The later, the better
Setting in the final outline of the leaves at the very end gives you more freedom. This way you will avoid breaking the edges, you can shape the relief freely and give it more movement and finally you can redraw the leaf to its best shape once ‘modelling’ is over. 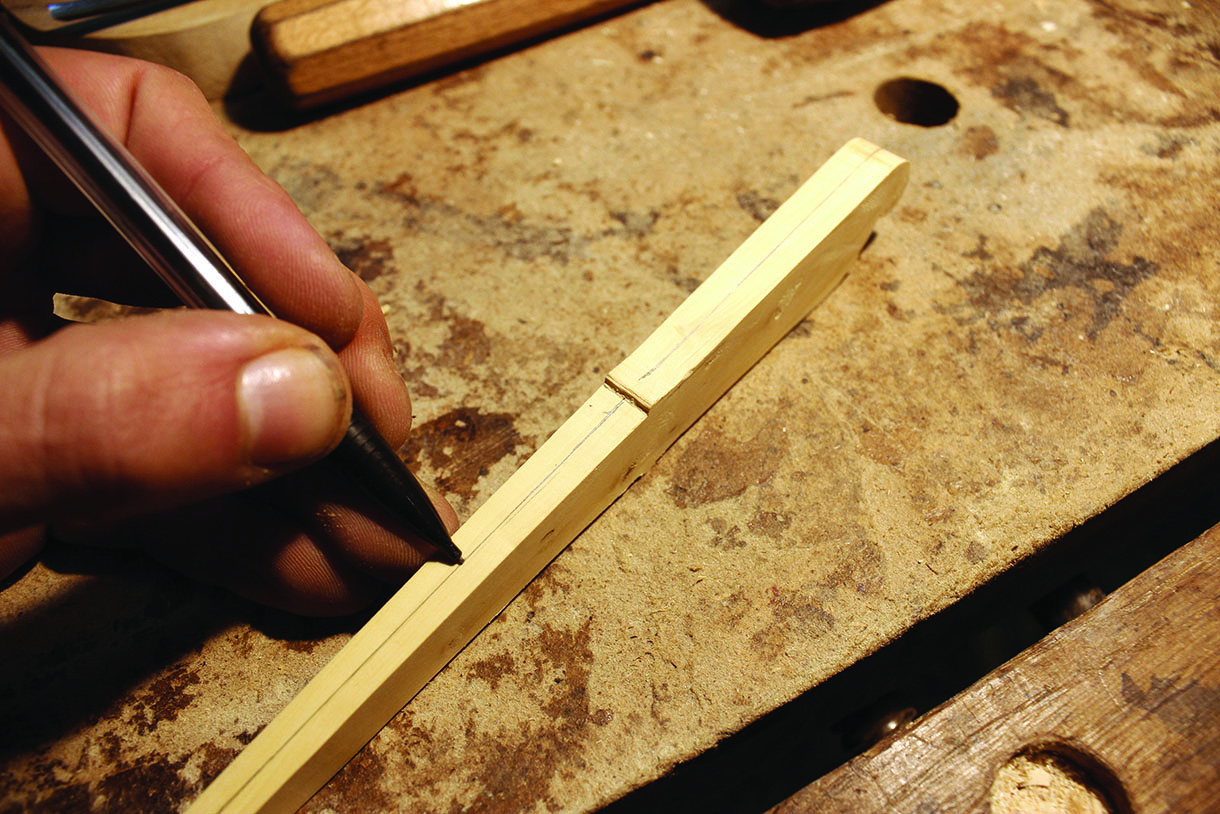 1. Use the block plane (small, low-angle block planes are very convenient for this) to reduce towards the tip at 8mm thick, keeping the wood 10mm thick at the top of the handle. Draw the outline of the letter opener and cut close to the line using the scrollsaw. Mark the centre line on both side and edge 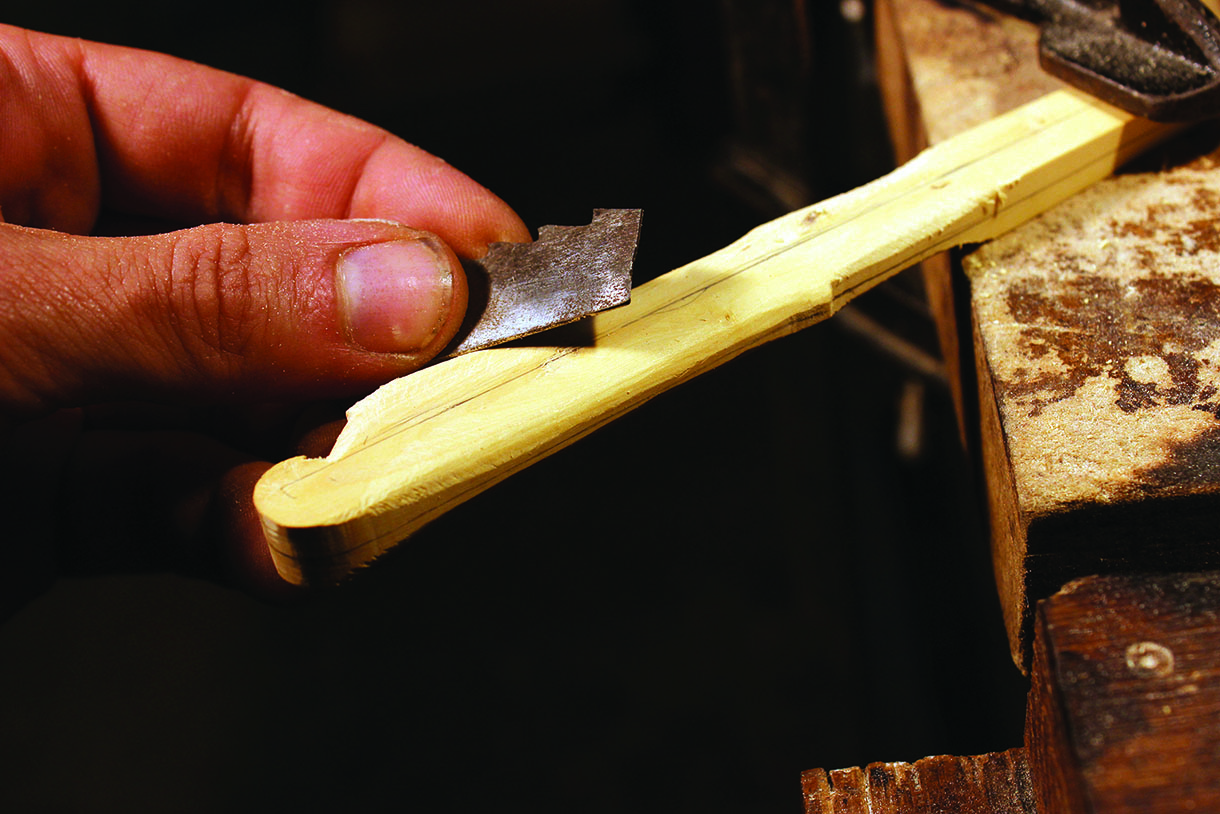 2. Clamp the ‘blade’ side on the bench and begin to shape the handle down to the first centimetre of the blade to give it an oval shape. Start to remove material with the riffler, then switch to the scraper to get an even, clean surface.Use the centre lines as a guide 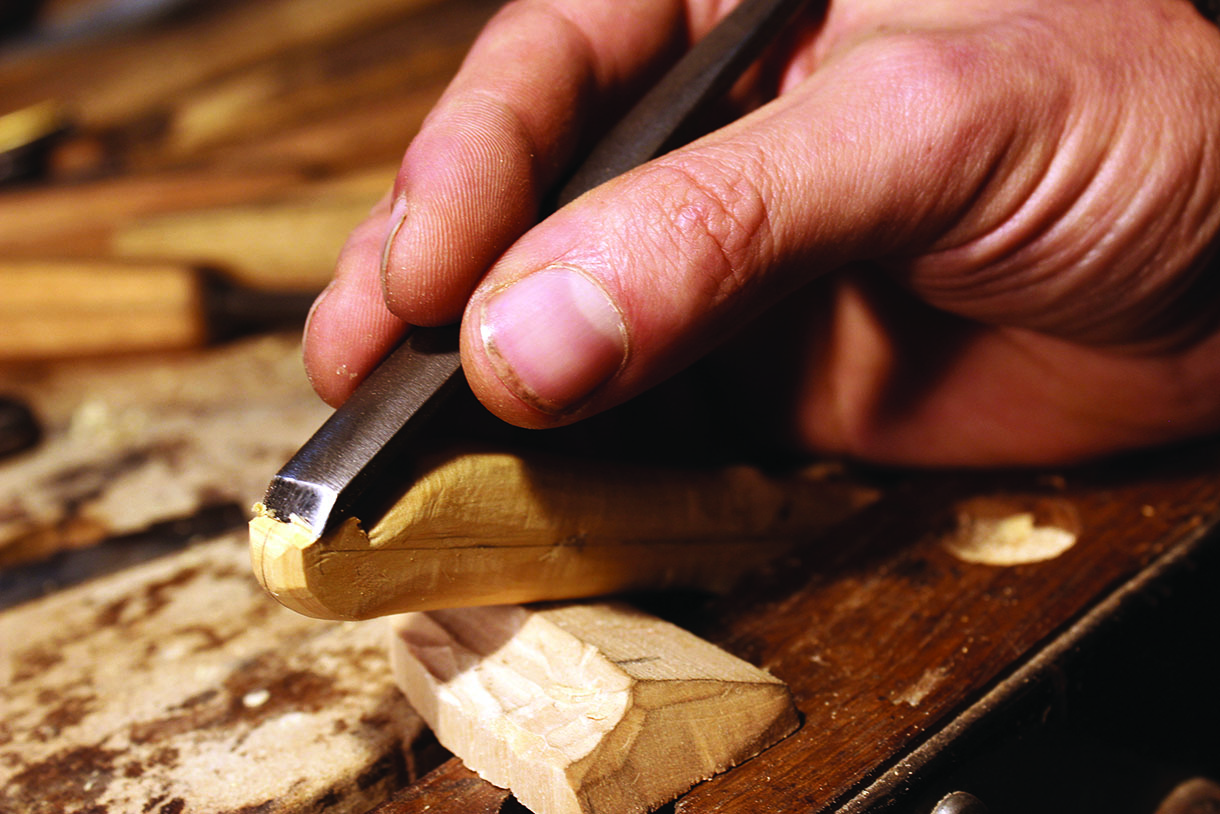 3. Round the top of the handle with the No.7, 12mm gouge. Be careful to follow the grain direction all around. It should almost look like a ball 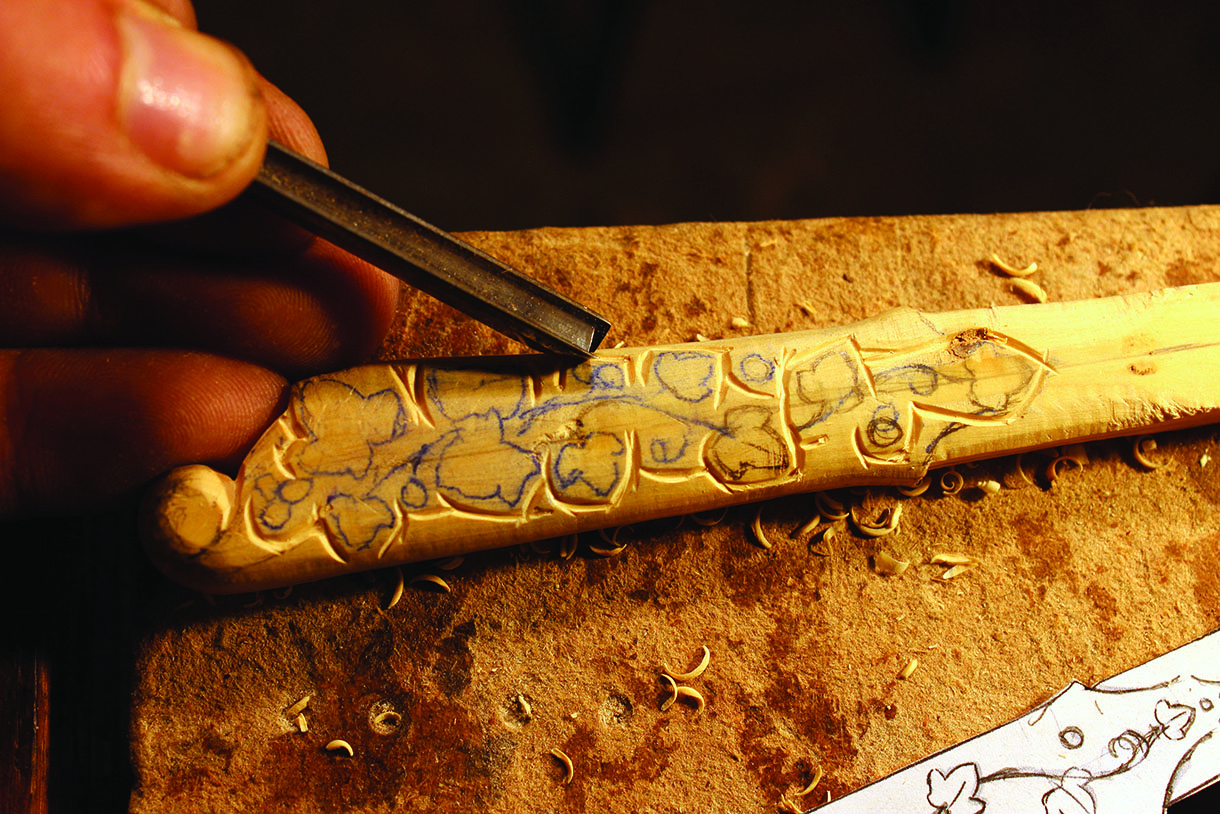 4. Draw the design on both sides using carbon paper. Use the V-tool to roughly outline the leaves. Don’t get too close to the stem for the moment 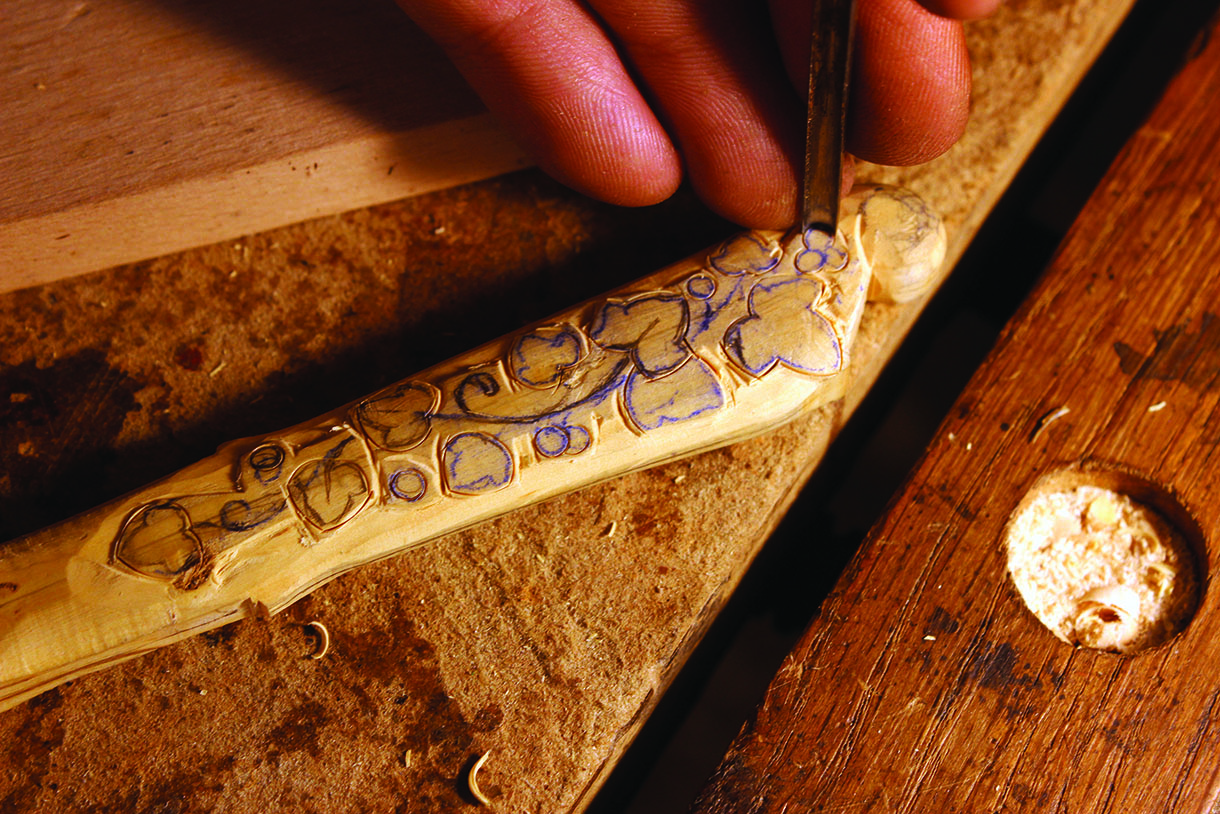 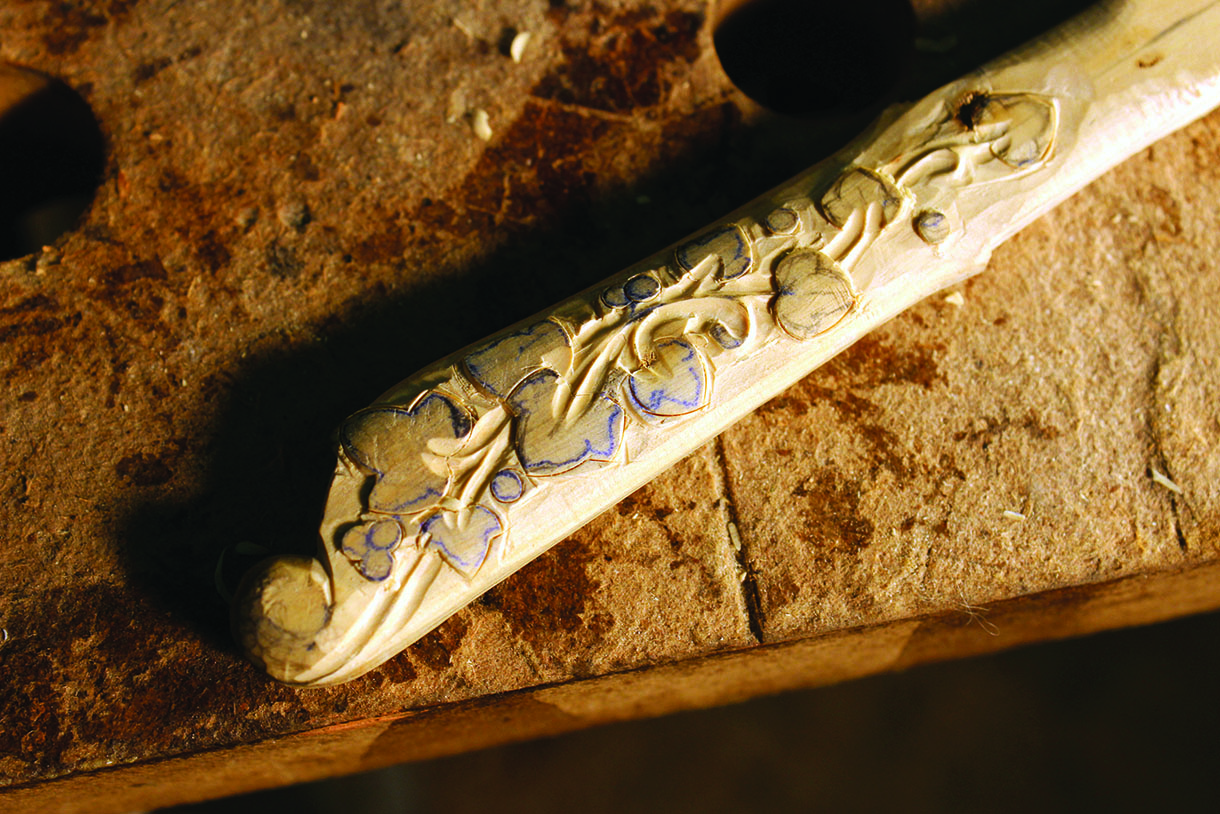 6. Given the size, the stems are brought out by carving a groove on each side of the line with the No.8, 3mm gouge. Start from the leaves and run the gouge along the line. On the top of the handle, twist the grooves towards the centreline on the top of the ball. Remove the outer edge of the grooves with the flat gouge to match with the background 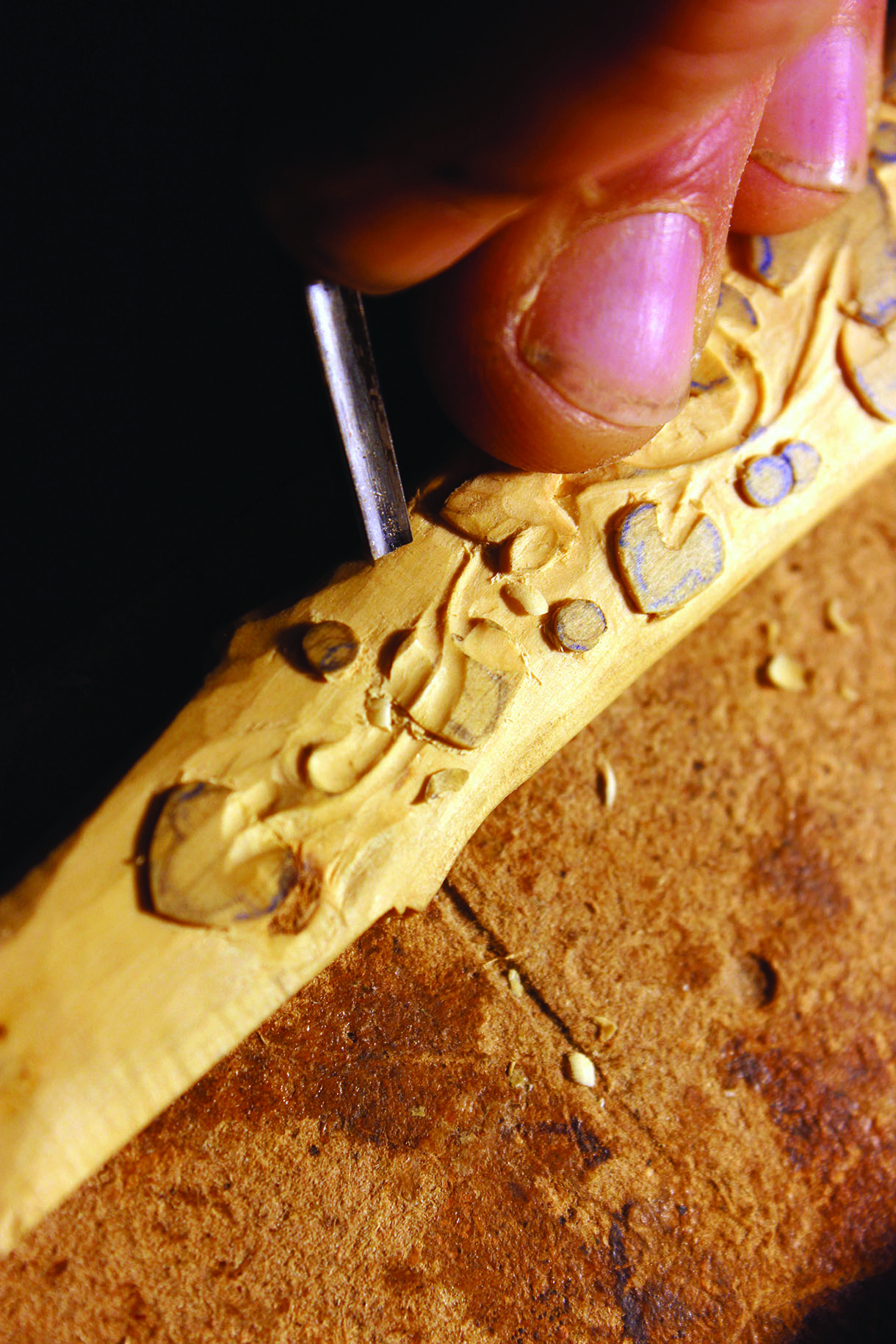 7. Now move on to the leaves. The highest points should be at the tip of the leaf and at the corner between the main and the small lobes (known as ‘sinus’). Draw a line between the base of the leaf and the sinuses. Using the No.8, 3mm gouge (or the veiner for the smallest leaves), carve a groove on each side of the line 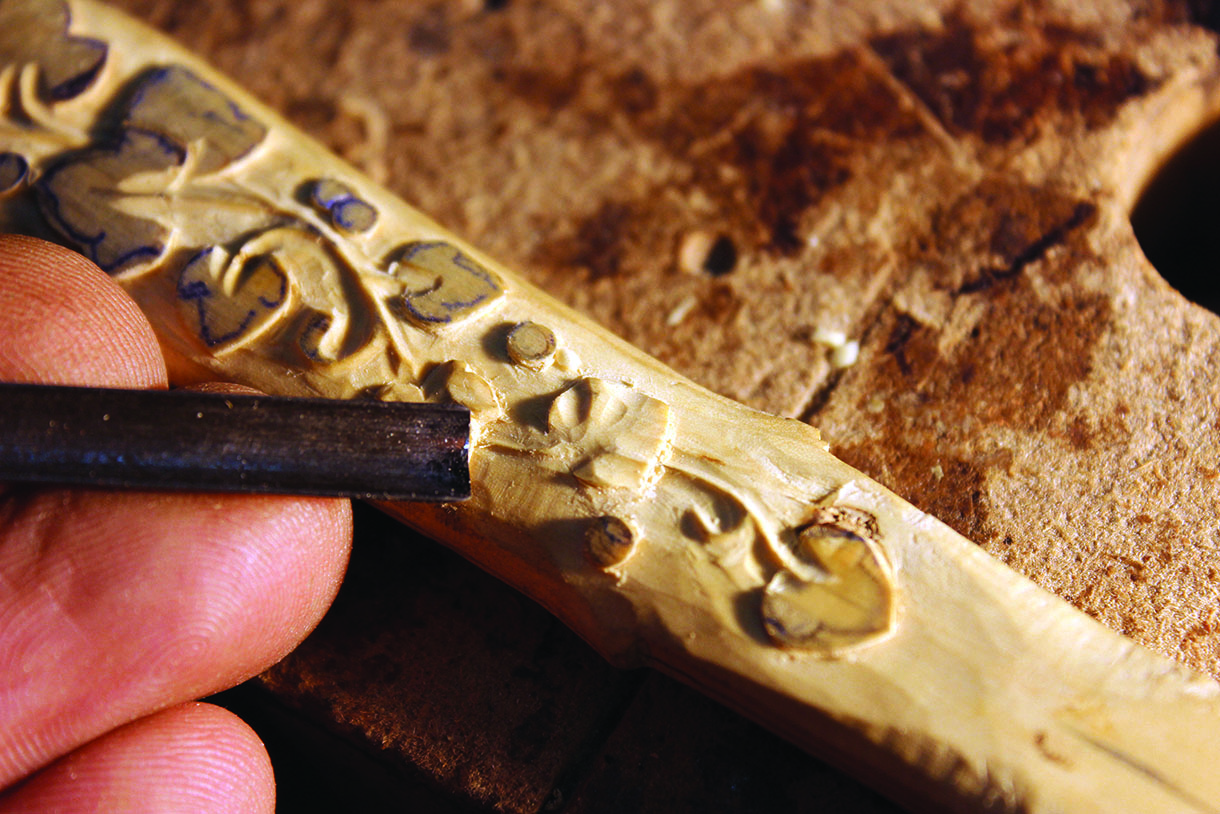 8. Hollow the centre of the leaf in the direction of the base. The base shoud be the lowest point. Break the angles on the main lobe with the No.3, 3mm gouge to get a wavy surface. This is the overall approach: try to play with the shapes on each leaf to give movement and make them more lively 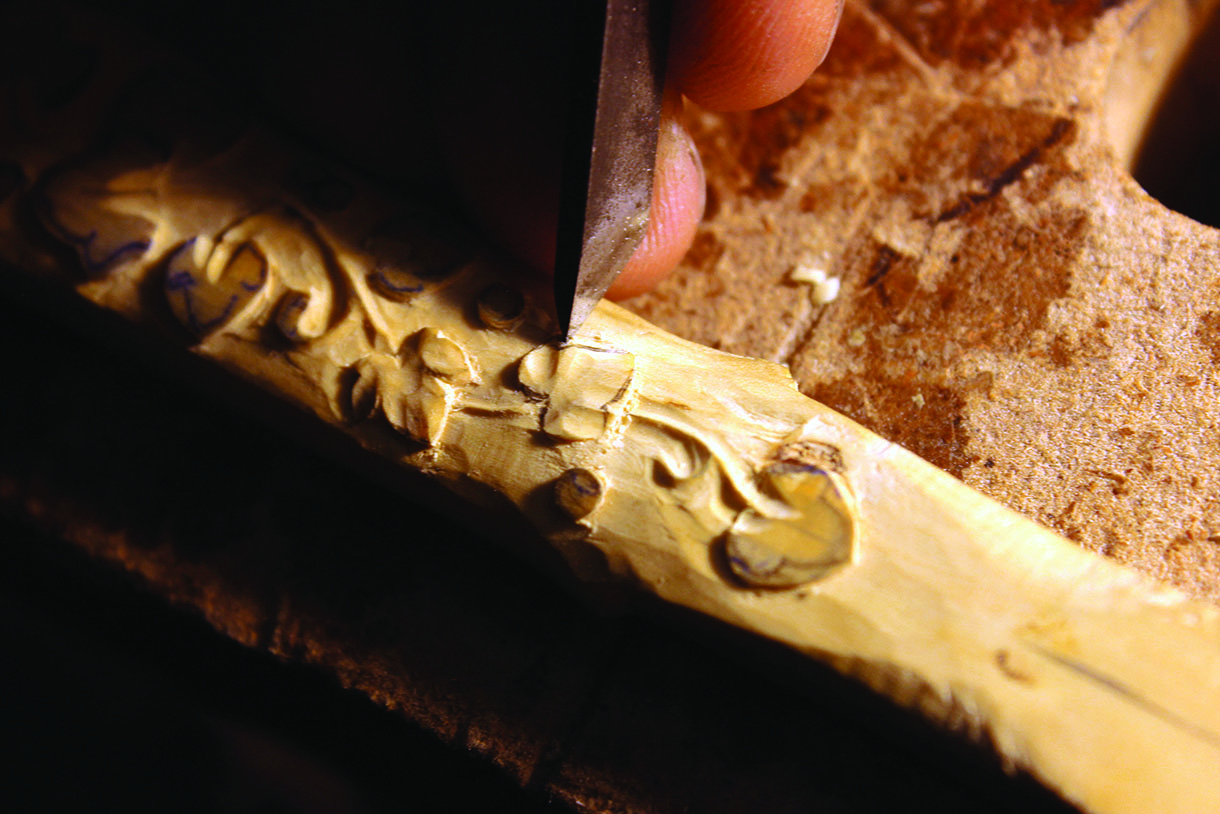 9. You can give a slight angle at the bottom of the small lobes on some leaves. It works well on the leaves on which you want to make the tiny pointy lobes at the base. Once you’re happy with the shape, redraw the leaf and set it in using the No.5, 6mm and No.7, 5mm gouges. Remove the waste. In line with the small lobes, make a small cut at the sinus which will catch the light 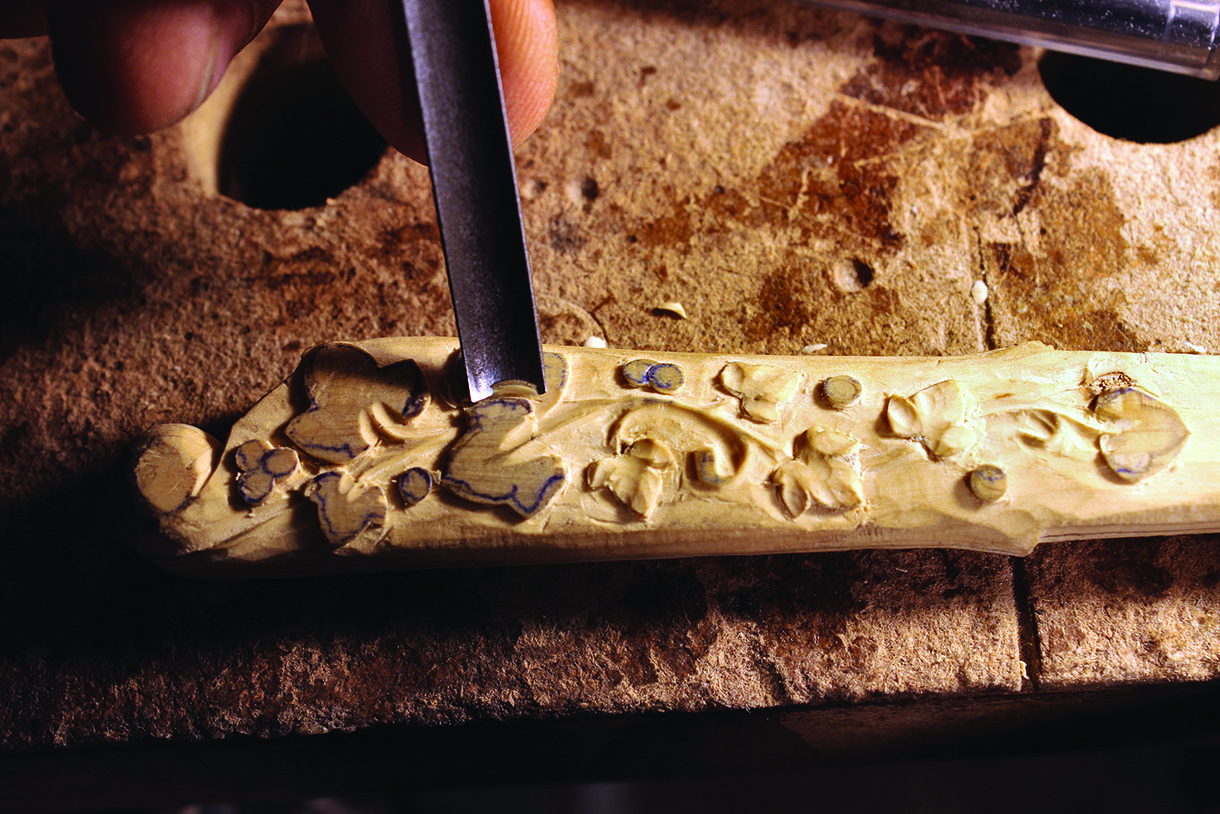 10. The two overlapping leaves aren’t more difficult to carve. Separate them by lowering the leaf below where they meet and carve the upper leaf first. The seeds are rounded by cutting and scraping carefully the angles all around with the No.3, 3mm gouge 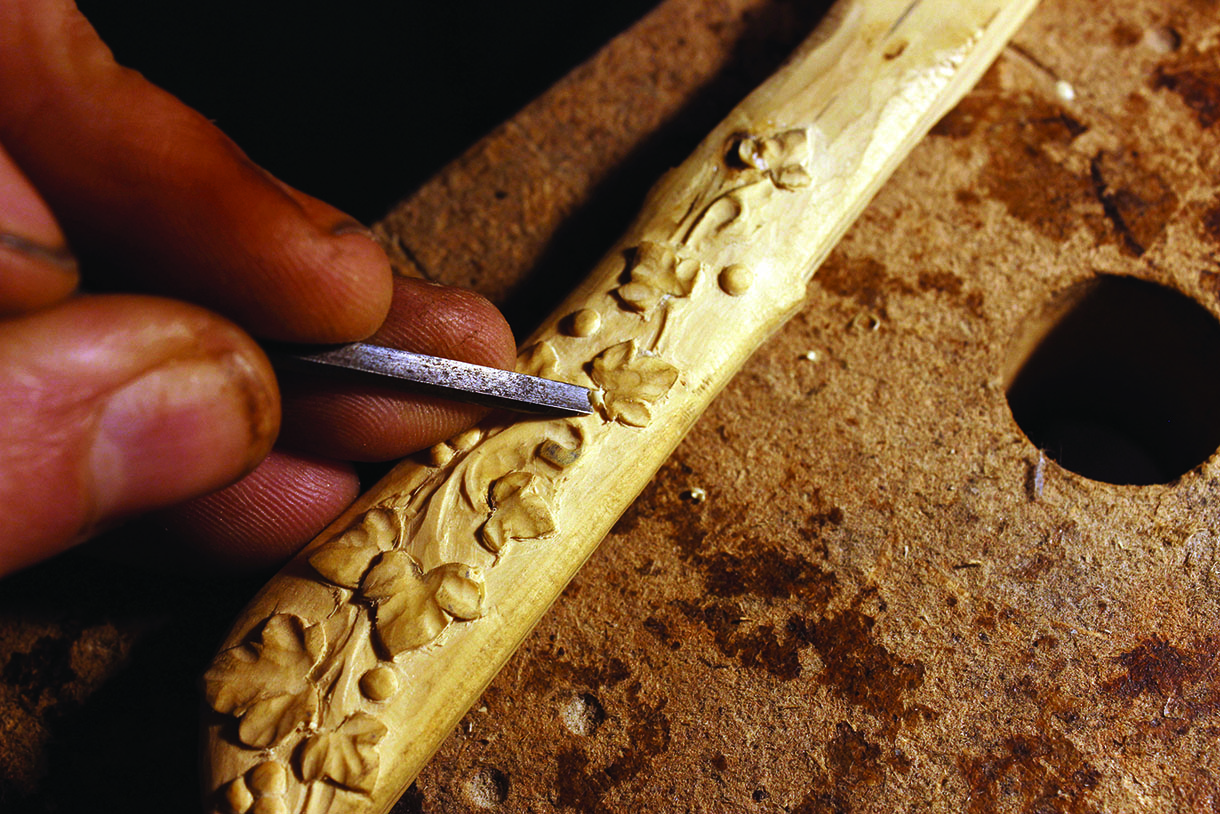 11. With the same tool, lower the stem where it runs under the leaves and where it looks too high 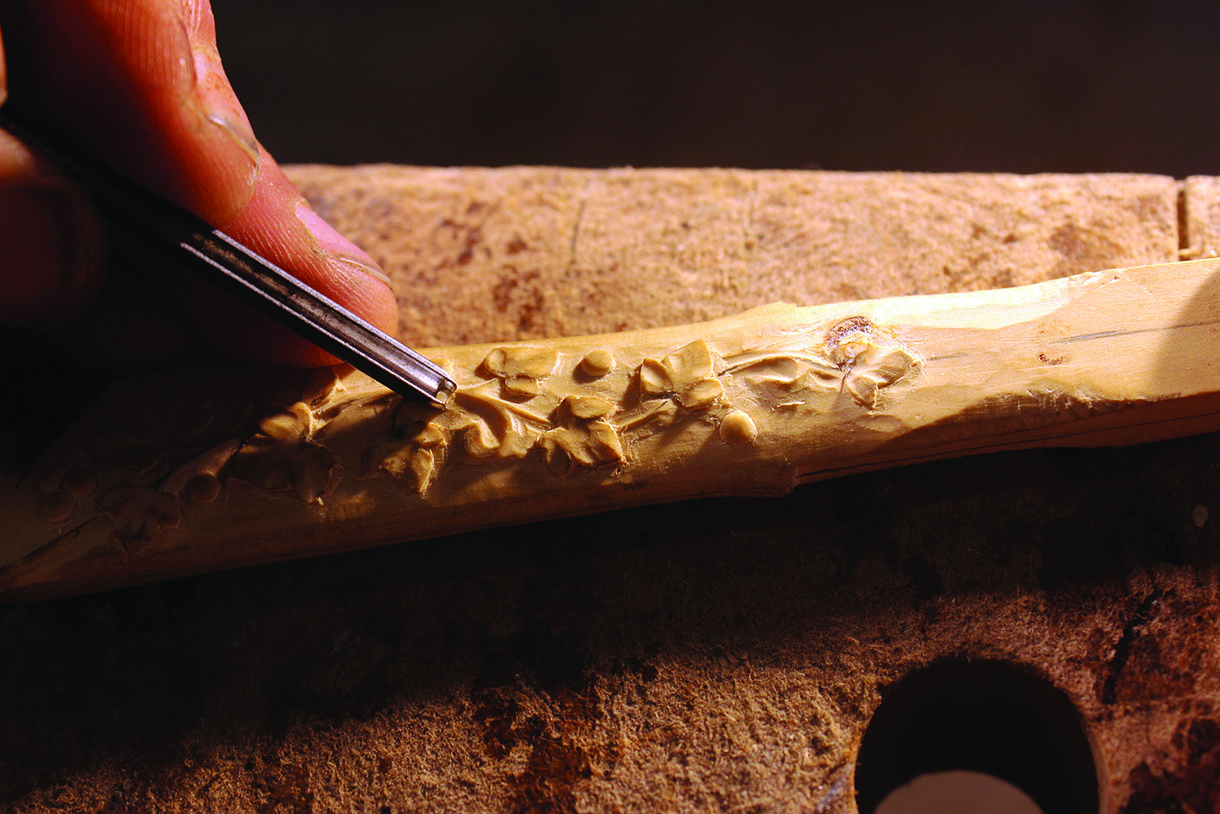 12. Redraw the stem and carve it again as in step 6. Set in the little curly ends using the No.7, 5mm gouge and give an angle on the outer side with the No.5, 6mm gouge 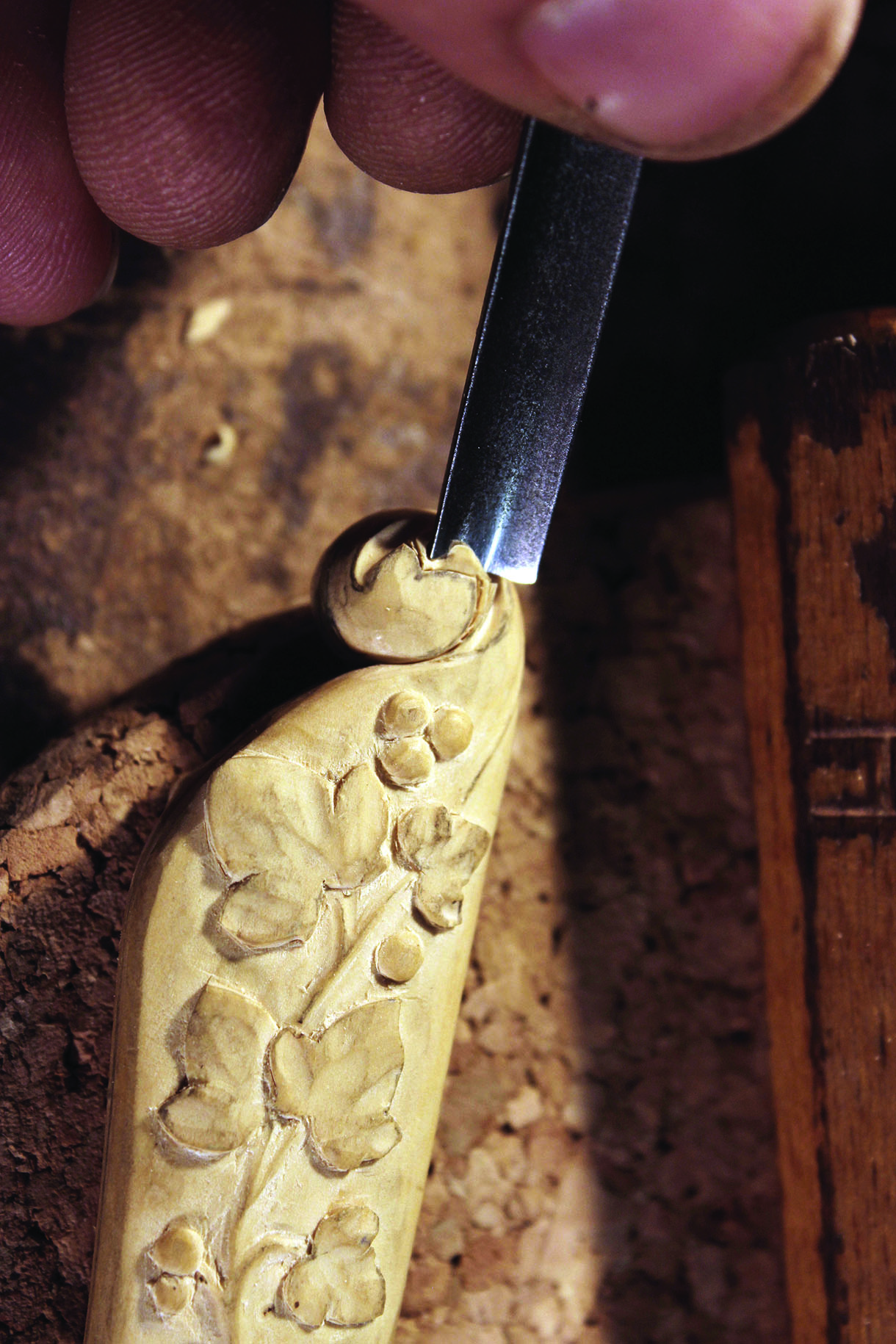 13. Move on to the curly leaf on the top. The junction of the leaf and the stem is just marked with the No.11, 2mm gouge. Set in the rest of the leaf and remove the waste using the No.5, 6mm gouge until you reach the stem line, turning around the leaf 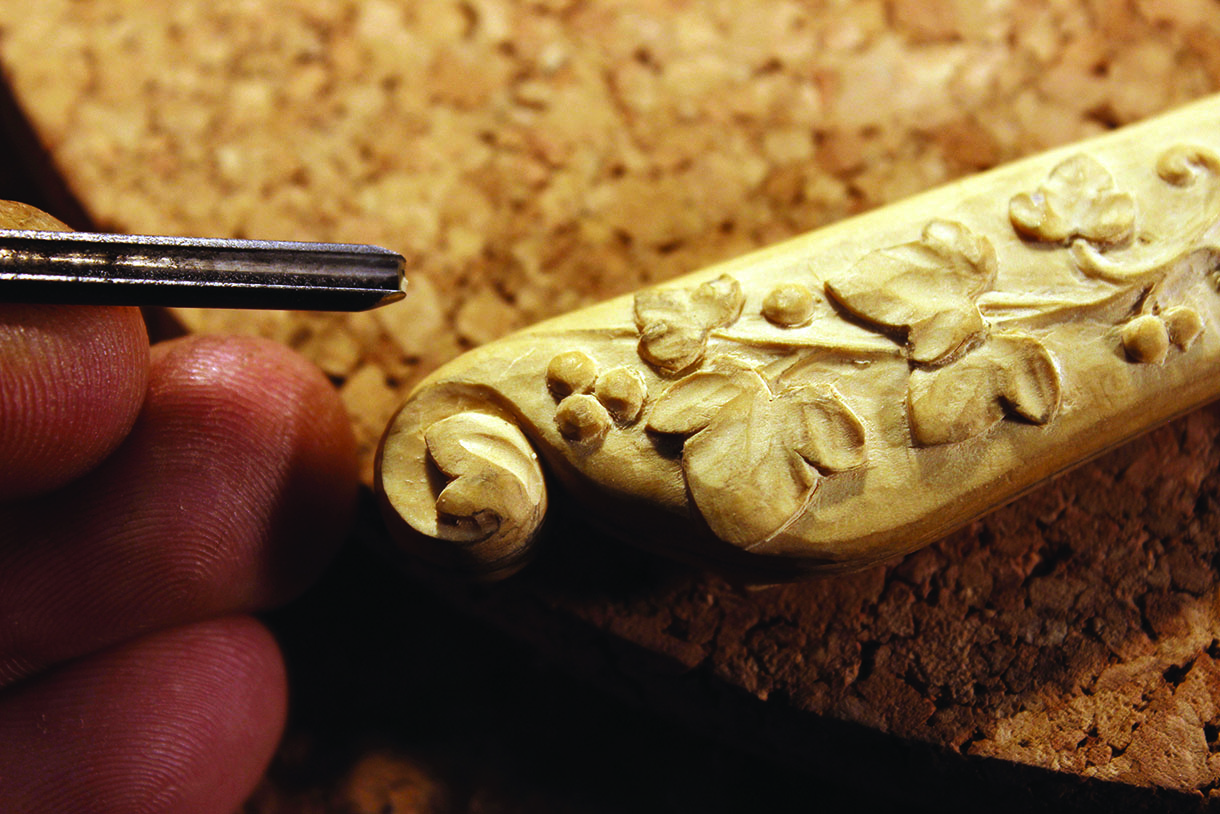 14. Add a groove with the veiner in the middle of the leaf. Repeat these steps to carve the other side of the handle 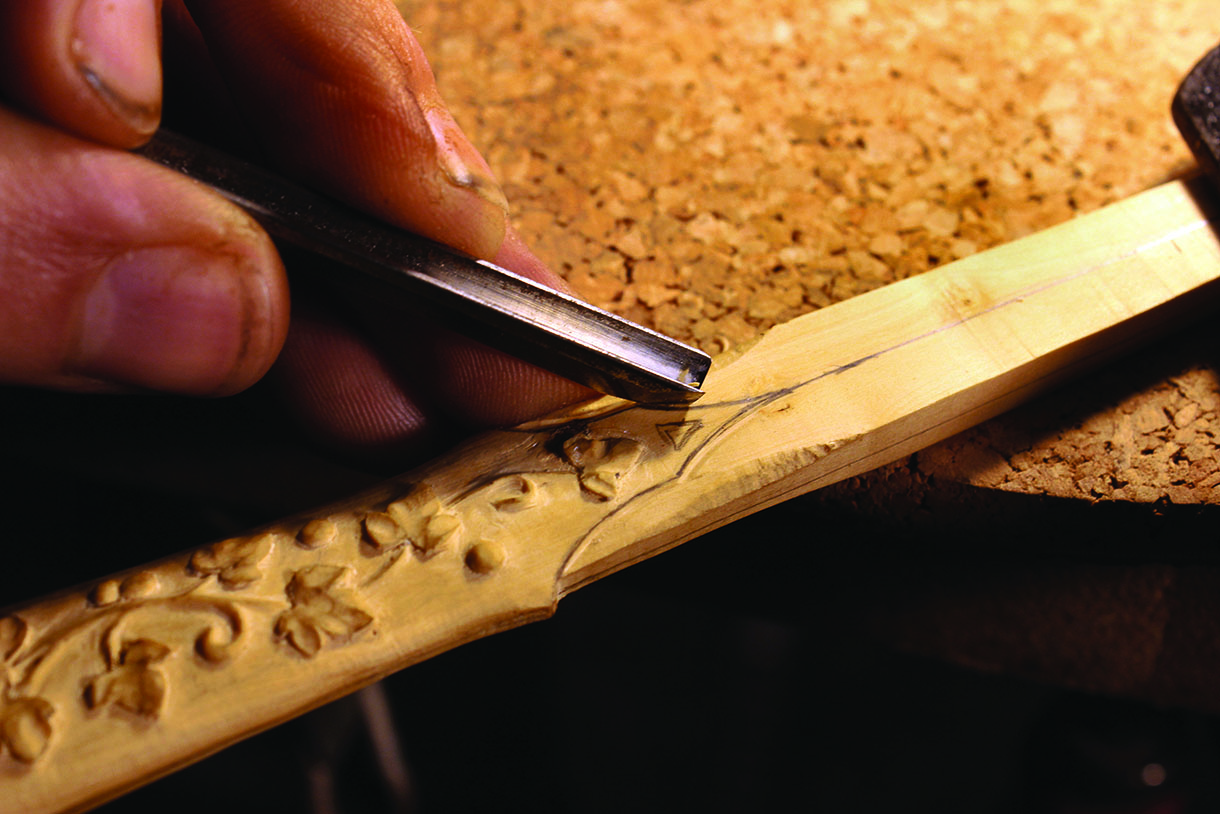 15. Redraw the limit of the handle and separate it from the blade with the V-tool. From this step, you’ll have to clamp the carved handle in order to work on the blade. To prevent damages, I used a wooden clamp garnished with a cork sole. A piece of cork is also slid between the carving and the bench 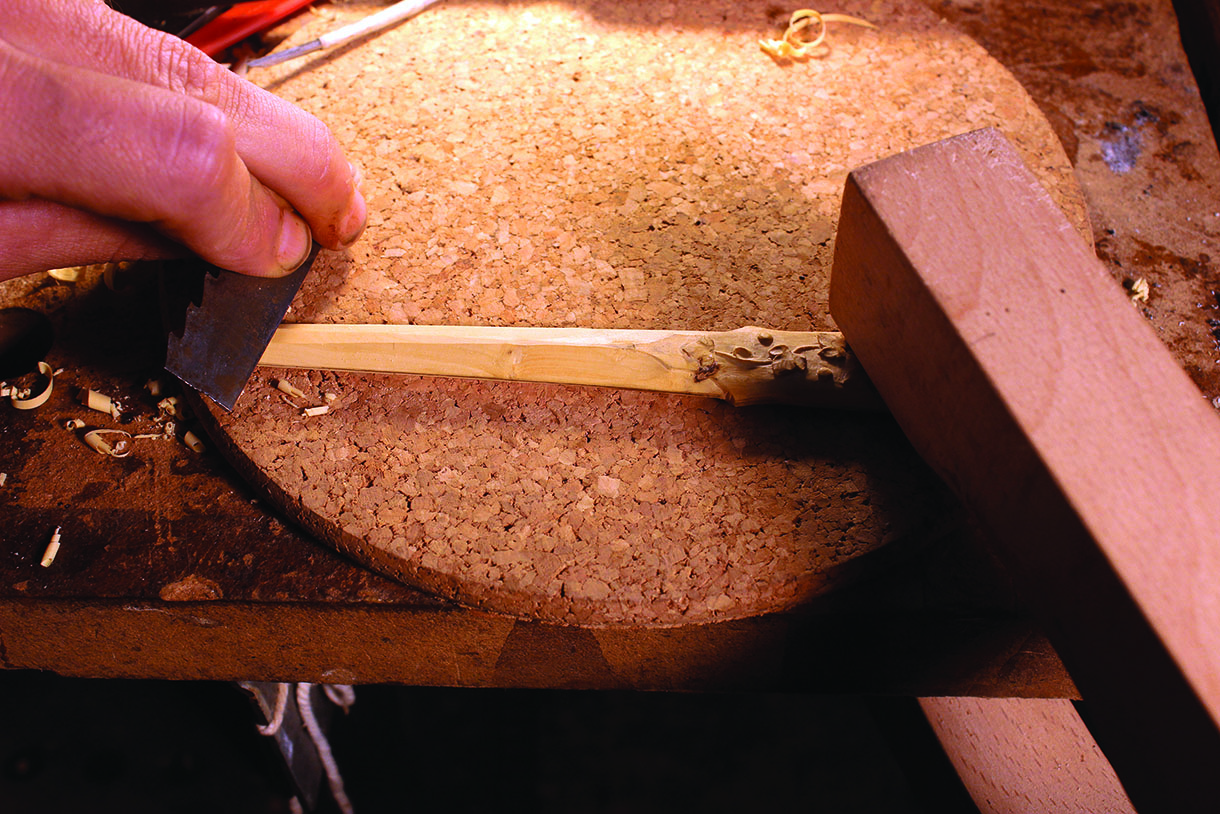 16. The blade is first cut in the shape of a diamond using the No.3, 16mm gouge or a chisel, along the centre lines. Once this is done, use the scraper to progressively thin the end of the blade on both sides to reach a thickness of 3mm at the tip 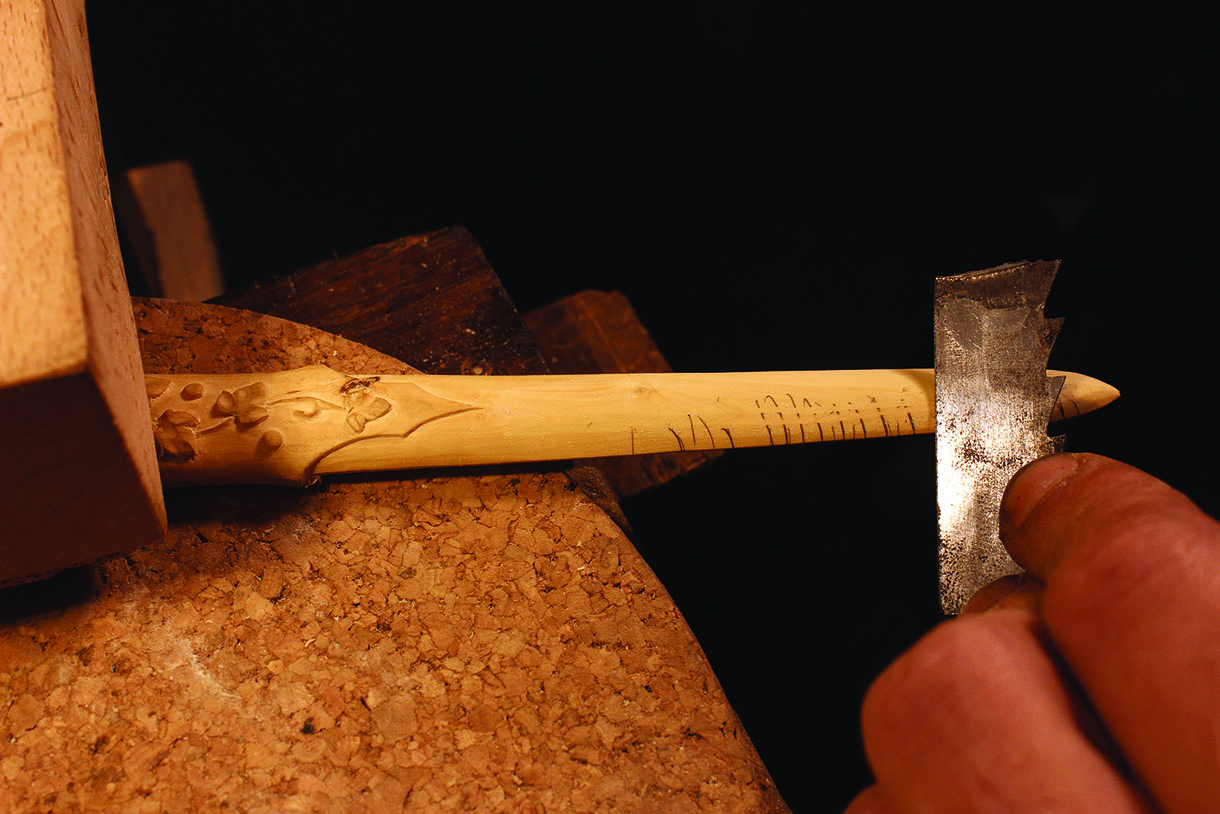 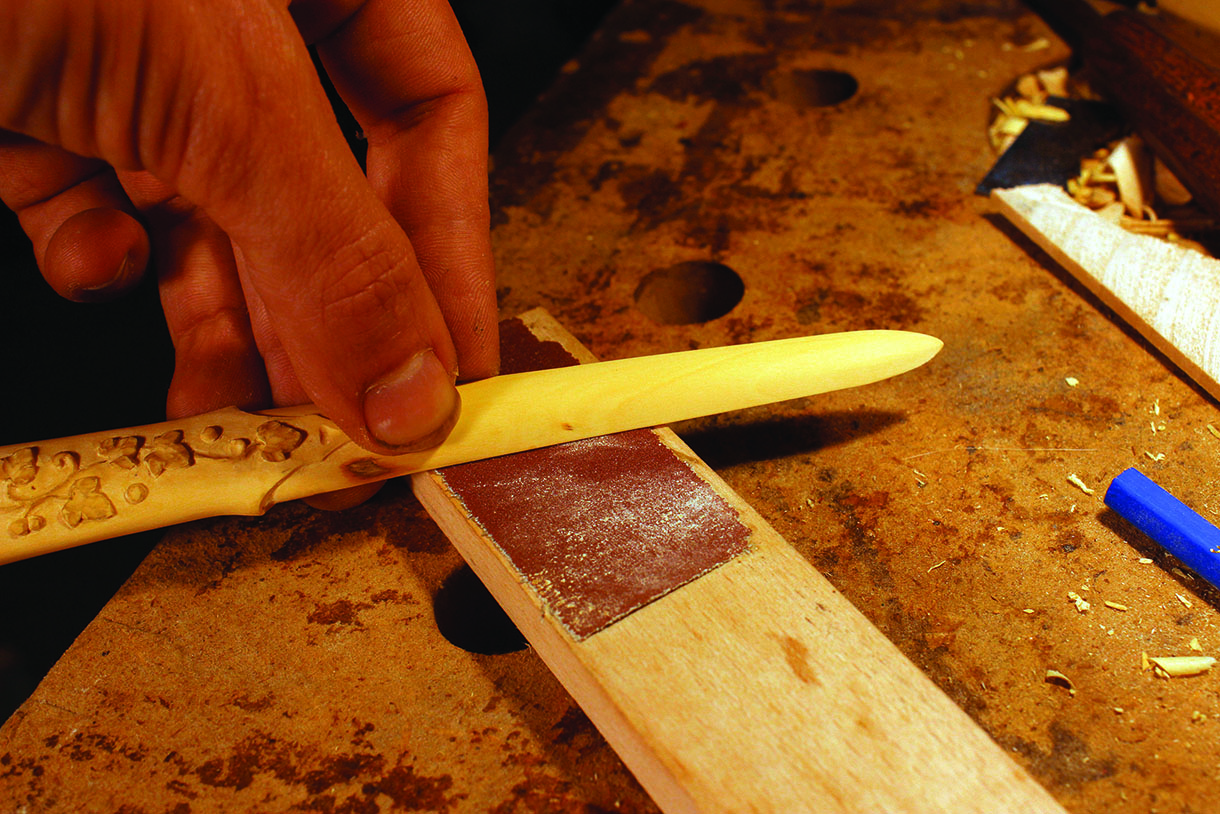 18. ‘Sharpen’ the edge on 180-grit sandpaper glued on a flat surface. Sand both sides until the edge drawn line has completely disappeared, then switch back to the scraper to clean the sanding marks. Add the small triangle under the last leaf of the handle: a small stop cut at the top, a little chip removed with the No.8, 3mm gouge and the letter opener will be ready for the finishing. I used Danish oil to prevent fingerprints appearing on the wood and completed it with a coat of wax