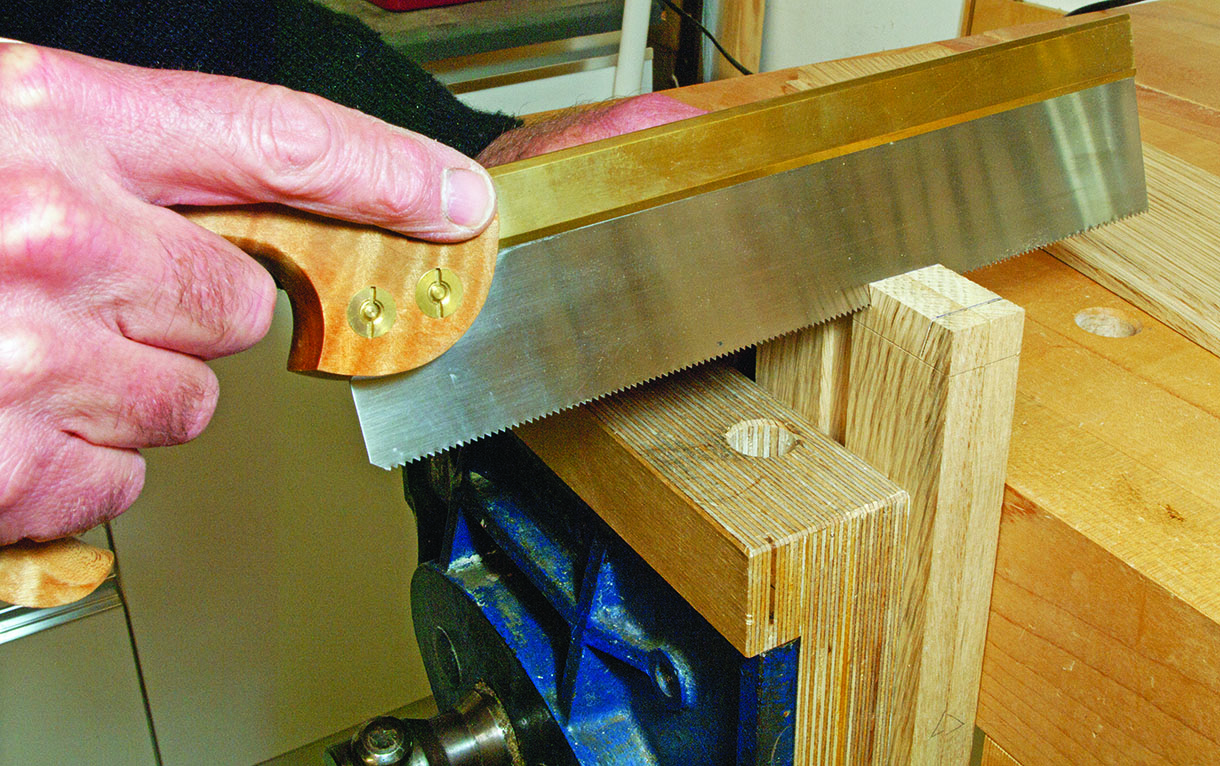 I imagine Oliver Cromwell had a number of things on his list of ‘Aims & Objectives’ when he got shot of King Charles I to head up ‘The Commonwealth of England’, but I doubt that one of them was ‘to influence 17th-century English furniture design’. At this point you might well have started that nervous tic that you used to have in History lessons, fearing that Mr Plumley might pounce on you at any second demanding the dates for the Battle of Culloden. Well, don’t panic, history can be quite relaxing and interesting when the fear of being hit round the ear with a board rubber is removed.
Back to mid-17th-century England, at about this time there was another Charles, son of the recently ‘deceased’ (executed) one, who decided to nip over to the continent for a while, not for his annual bucket and spade to Brittany, he just thought that not being in England for a while would be very beneficial for his health and general well-being. Having lived in France and the Netherlands for some years, when Charles returned to England to become King Charles II, he brought with him all sorts of exciting design ideas and influences that were all the rage on the continent, and there was a bit of a fire in a London bakery at about this time, so there was also a need for lots of new furniture. One of the fashions that came from the Netherlands was for a rather flamboyant glued and pinned surface decoration, used extensively on chests, spice cupboards and dressers, often as geometric patterns created with strips of moulding on things
like drawer fronts.

Drawer design
There are certain key areas that are really useful to get an idea of the date of a piece of antique furniture and one of the key ‘clues’ is drawer design. Originally known as ‘drawing boxes’ or ‘tills’, (oddly a term that’s still used for those drawing boxes that keep money safe in shops), drawers probably first appeared as early as the 15th century although they were pretty crude with simple butted and nailed joints, but in the 17th century the furniture industry’s R&D departments started to make a bit of headway. Joiners started using dovetails and by the middle of the century a ‘chest of drawers’, in a form that we recognise today, had developed from the joyned chest, or coffer, with a drawer or two in the base, sometimes known as a ‘mule chest’. No, I don’t know why it’s called a ‘mule’ chest either. Drawer fronts started off with pretty crude single through dovetails, sometimes nailed, progressed to two tails with a spot of glue, and finally, the lapped version that we recognise today, with several dovetails, became the joint of choice and it’s stayed with us for over 300 years.
The rest of the drawer construction didn’t really sort itself out properly until the Victorian period, when quadrant drawer slips finally solved the problem of drawer bottoms having a constant desire to change size and a consequent tendency to self-destruct. We all know that shrinkage of wood can cause problems, except for furniture restorers where it provides a constant, and welcome, source of work. Shrinkage is a particular problem associated with early drawer bottoms, which generally had the grain running from front to back, with the bottom nailed to the underside of the front, sides and back. Shrinkage either bowed the sides, or split the bottom, or both. Later on, the bottom was turned through 90°, but this didn’t really solve the problem, it just changed its orientation.
Glued and pinned mouldings gave way to the rather more restrained decoration of ‘cross-bandings’ and ‘cock beading’ that typifies Georgian furniture, although there were occasionally drawer fronts that had fielded edges, looking something like a ‘cushion’ but much less fussy.
If you’ve tried cutting dovetails, you’ll know that through dovetails are generally the simpler option, but the ends of the tails are visible on the drawer front. These days this might be considered to give a slightly ‘contemporary’ twist, but in the 17th century the ends of the dovetails were usually hidden with the addition of mouldings to the drawer front. 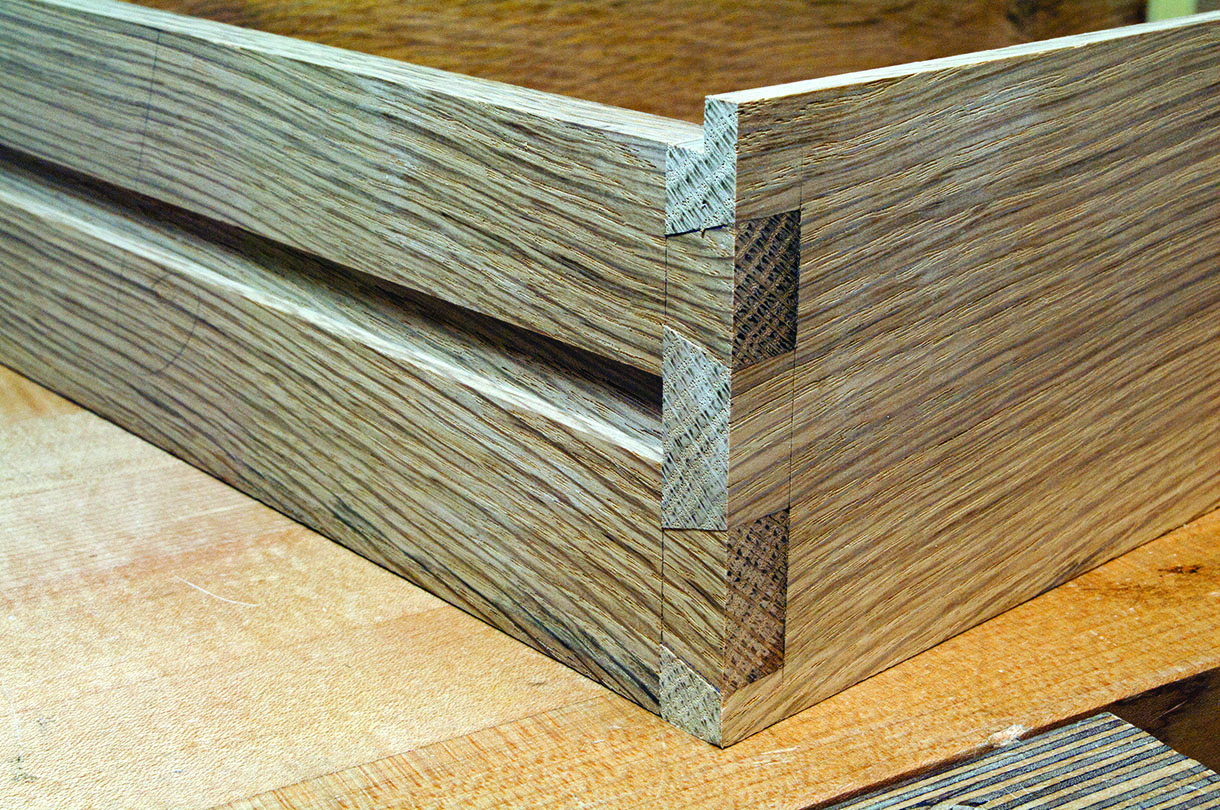 Through dovetails with alarming 1-in-3 pitch 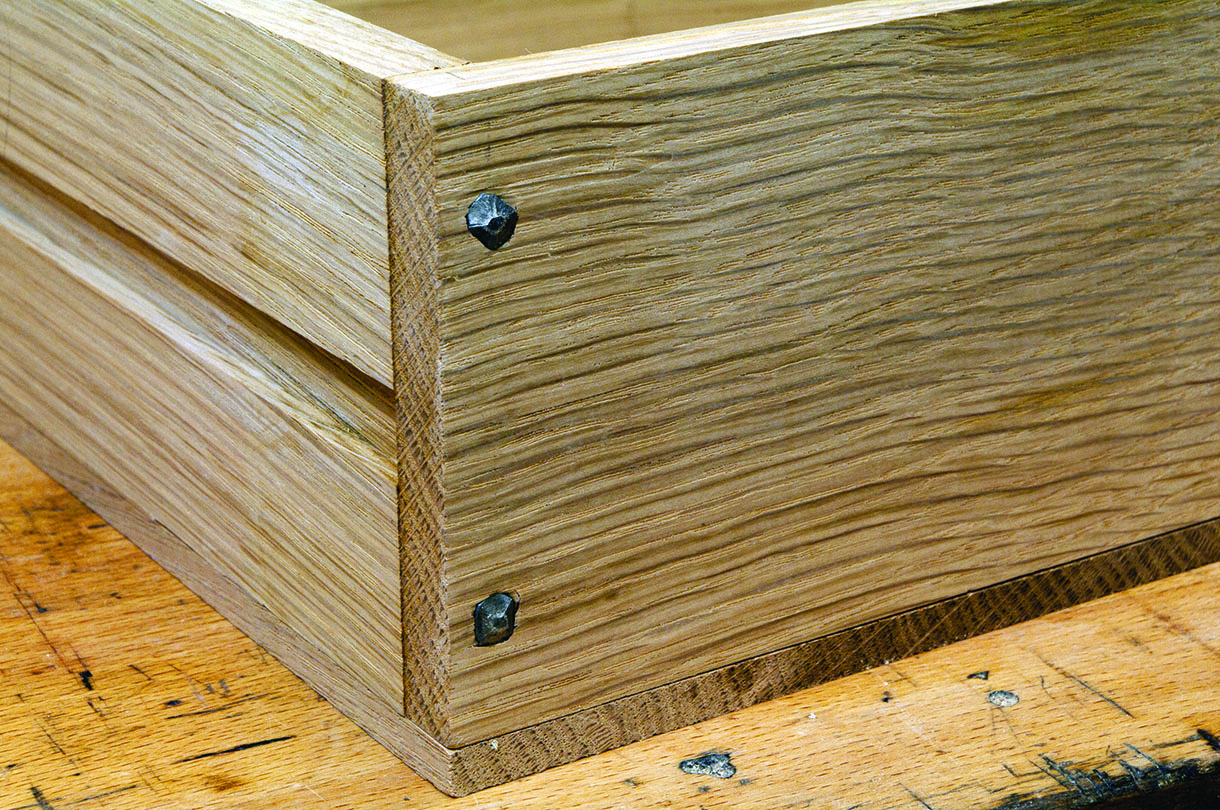 The back is just a butt joint and cut nails

Cushion drawers
What’s a cushion when it’s not that item of soft furnishing that apparently has to be heaped artistically, in ever increasing number, on every chair, sofa or bed that you possess? Well, there’s something called a ‘cushion drawer’, this is a shallow drawer, usually with a convex front and with no handles, which sits right at the top of a chest of drawers pretending to be a frieze – it’s a bit of a half-hearted attempt at being a ‘secret’ drawer really. However, the ‘cushions’ that we’re looking at here are angular, decorative, raised sections on drawer fronts, made up of applied chamfered strips and mouldings. This applied decoration, which was also a dovetail concealer, would be a single cushion on a small drawer, but for added excitement, a longer drawer would often be fitted with ‘twin cushions’.
Making a cushioned drawer starts, as with any drawer, with a box. It’s just a question of what happens at the corners to hold it all together. Having done a little research and sent a spy to Godinton House in Kent, I was pretty sure of the construction, although in 25 years as a restorer and maker I had never had occasion to make a drawer quite like this before. The drawer front was going to be covered with mouldings, and one of their functions was to cover up the ends of the dovetails, so through dovetails were all that was required. How many? Just two on a drawer from this period, which is at about the mid-point of dovetailed drawer development. The tails that I came across at Godinton didn’t even try to be of an even size and spacing and the pitch equated to an alarming 1:3, miles away from the ever so sophisticated 1:8 that we tend to use these days. The tails just had to be positioned so that they missed the rebate for the bottom and the groove running down the side, drawers from this period were still ‘side-hung’ on runners.
During the cutting of the tails I lost part of one of the corners, it just pinged off right along the line of a medullary ray, which made me wonder why the joiners of the time used such an acute angle. Perhaps they thought it was required for the strength of the joint, but it actually makes the tails themselves rather fragile! To try to get in touch with my inner Carolean joiner, I just marked the position of the tails but, aiming for about 1:3, went freestyle with the actual angle of the cut, not a concept that’s completely alien to me because I use ‘freestyle’ dovetails as a little exercise with my students, and it’s actually quite liberating. With the dovetails cut, the jointing of the back couldn’t be simpler, just a butt joint (rebates came later), a drop of animal glue and a couple of cut nails. I pre-drilled for the nails to prevent splitting, something that must have been done as oak can be quite brittle. 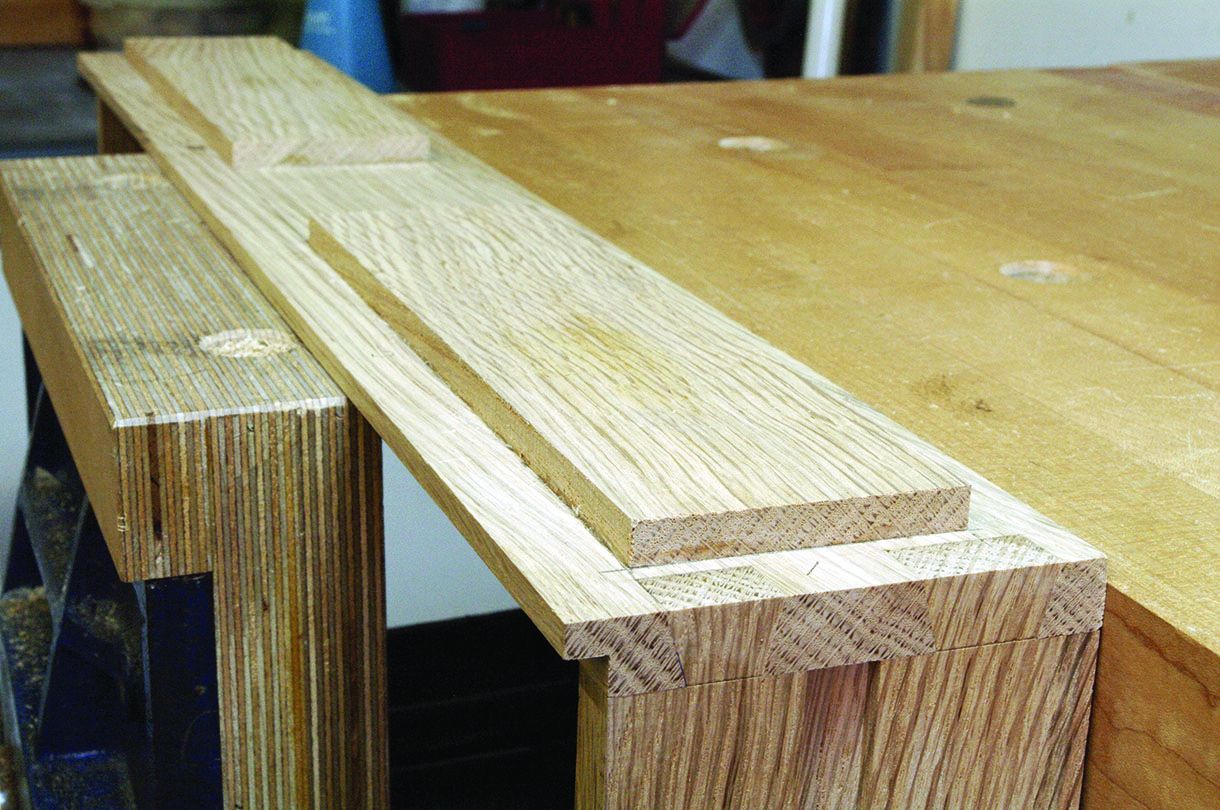 The two platforms give the cushions their height 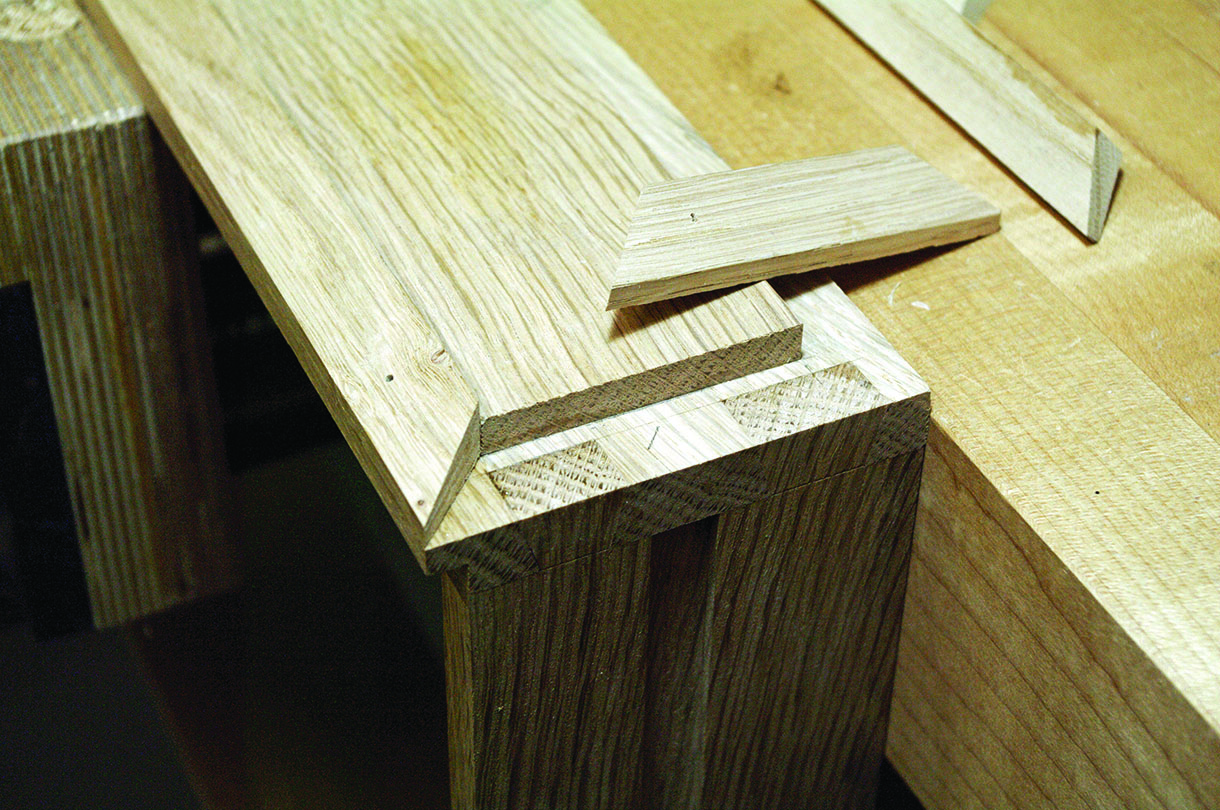 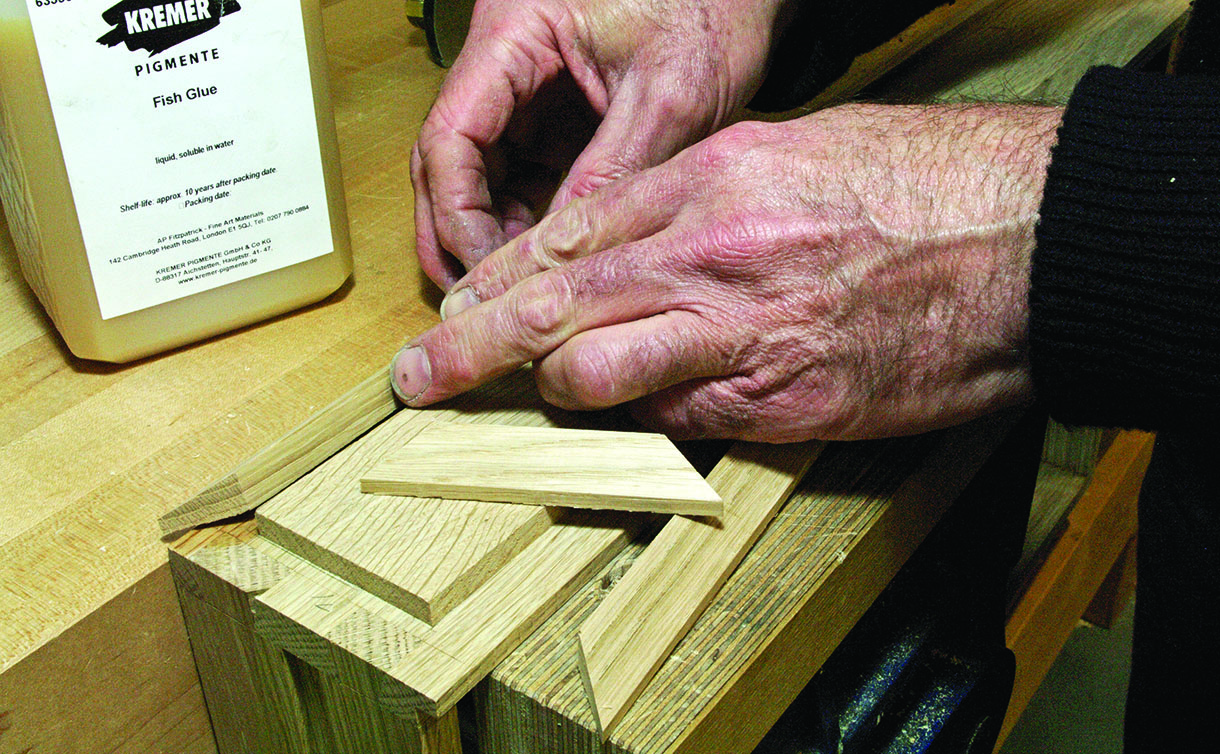 The cushion mouldings are glued and pinned 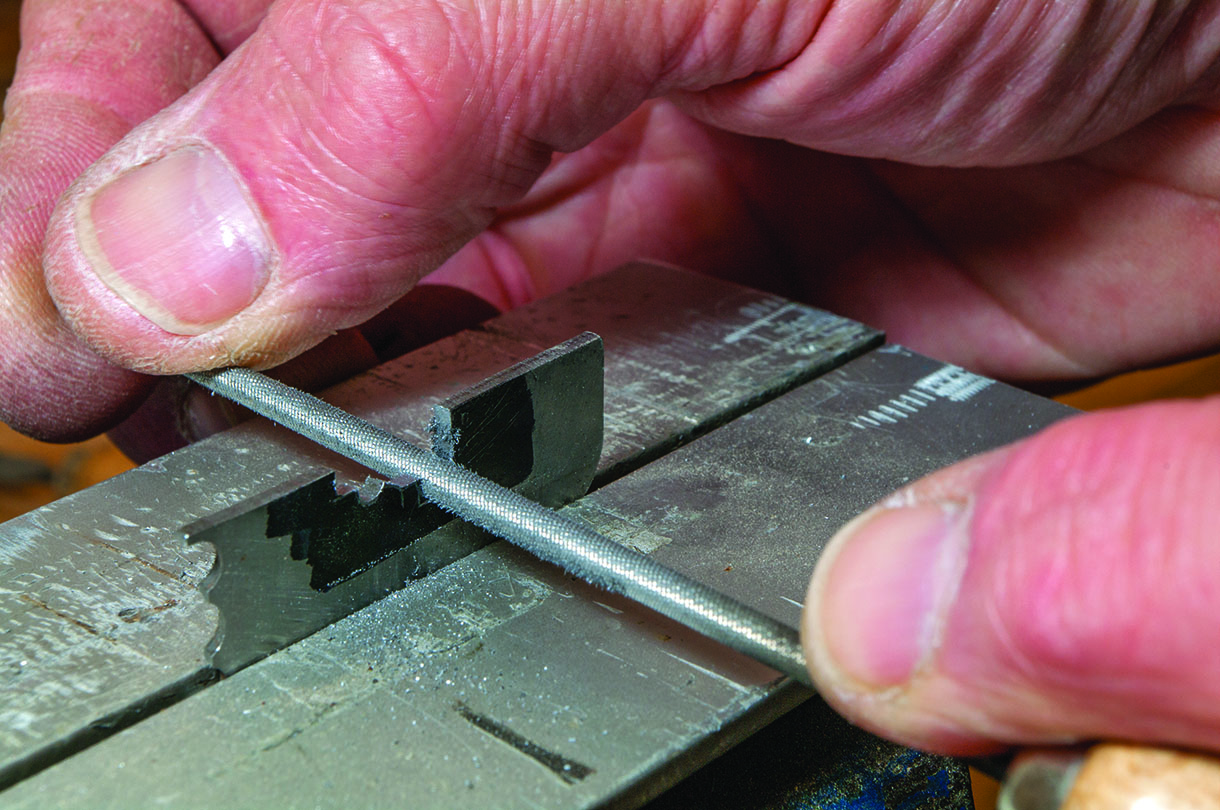 File the scratch-stock cutter to your chosen profile

Decoration
Now for some decoration. There always seems to be a platform in the centre of a cushion, sometimes it’s a sort of pierced fretwork, sometimes veneered and I have come across examples where this little platform is decorated with ink patterns, but for now, mine is just going to be plain, solid oak. Thickness is an important consideration so that the relationship between the platform, the chamfered ‘cushions’ and the mouldings works. Twin cushions were all the rage on longer drawers, so two ‘platforms’ were glued on, giving something fixed to assemble the rest of the pieces around. The chamfers of the cushion pieces are at quite a shallow angle, which I just planed by hand. Mitred corners have the usual challenges associated with any mitre joint, helped by the use of a shooting board, which joiners of this period would have had, or a disc sander which they might have just been dreaming about. When reading about this sort of decoration it always seems to be ‘glued and pinned’ so that’s what I did, all pretty straightforward because the ‘platform’ keeps everything lined up.
I love the simplicity of the scratch-stock, usually my tool of choice for letting in line inlay, but equally good at mouldings. The scratch-stock gives complete freedom of design for the moulding, just find a piece of spring steel, perhaps an old saw blade or a cabinet-scraper, scribe your design into some marker pen and saw/file your shape into the steel. Sharpen the cutter by rubbing the two flat faces on a bench stone, up to about 6000 grit. You can also use slip-stones on the filed profile, if you’re feeling keen, but this step can usually be skipped on this sort of work. The blade holder, the scratch-stock, can just be the simple L-shaped piece of beech, split down the middle and screwed together to sandwich the blade. But for a narrow moulding I will generally make a blade holder with a slot of the same width as the moulding, with the blade secured in the middle of the slot, the holder straddles the wood and keeps everything straight. You might find that the cutter needs re-sharpening at some point. To keep a consistent shape to the moulding I draw round the cutter and use a piece of double-sided tape to maintain an accurate cutter position while the scratch-stock is dismantled and re-assembled. When cutting the moulding with a scratch-stock, there’s no depth stop or bearing to control the cut, so cover the top edge with pencil and stop cutting when the pencil disappears. Now we just need more mitres, glue and pins to fit the moulding around the inside edge of the cushions and the central section between the cushions and the drawer is finished. 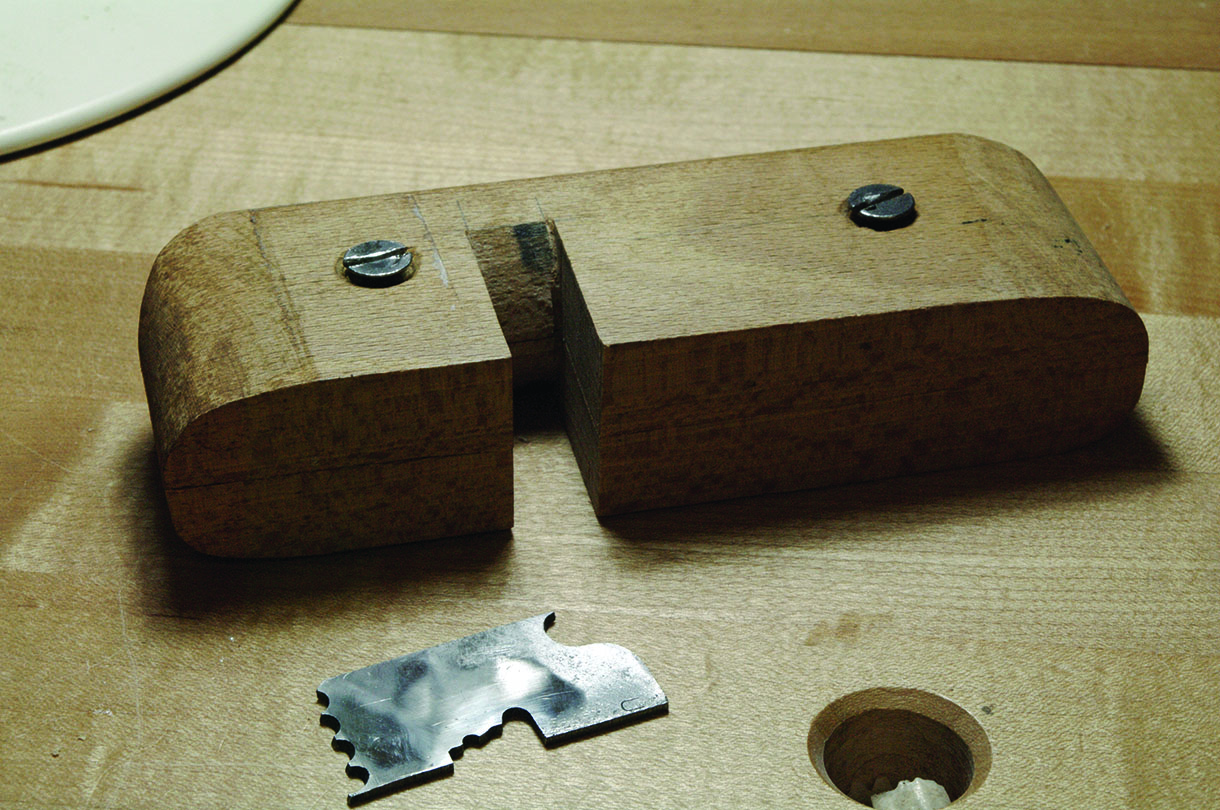 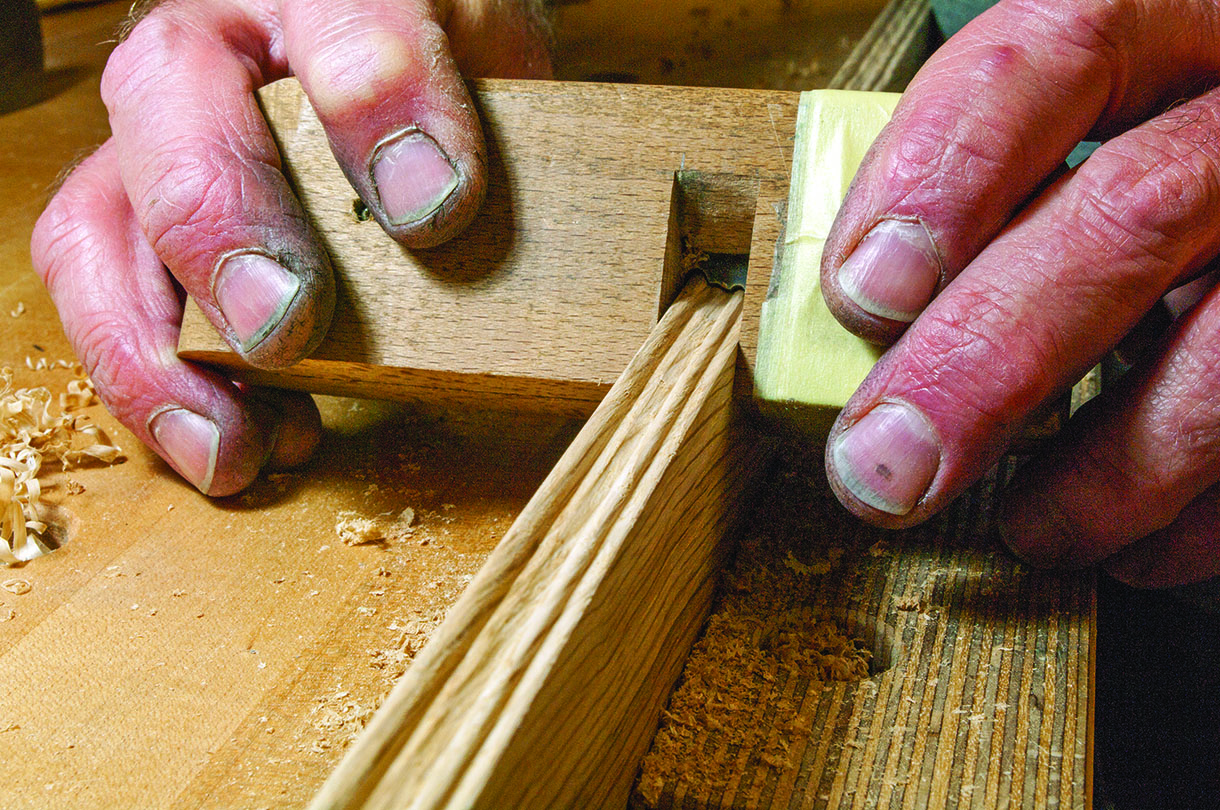 When the pencil disappears you’re done 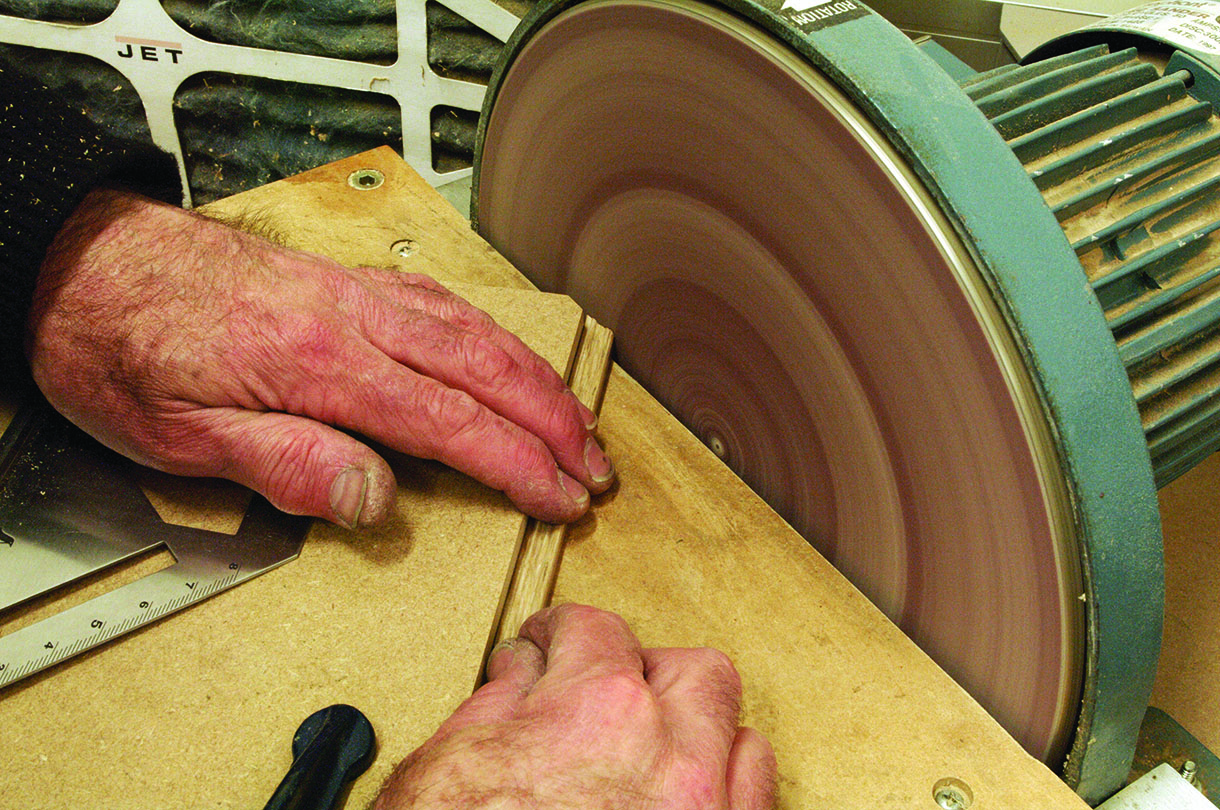 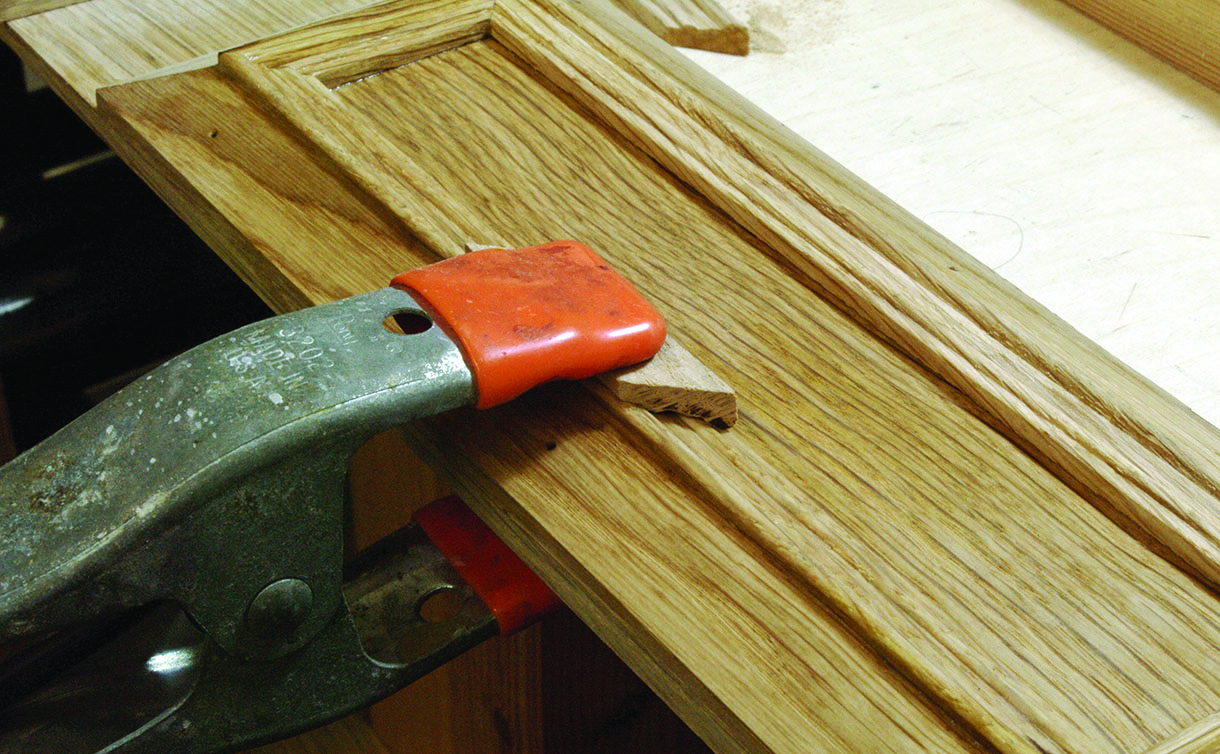 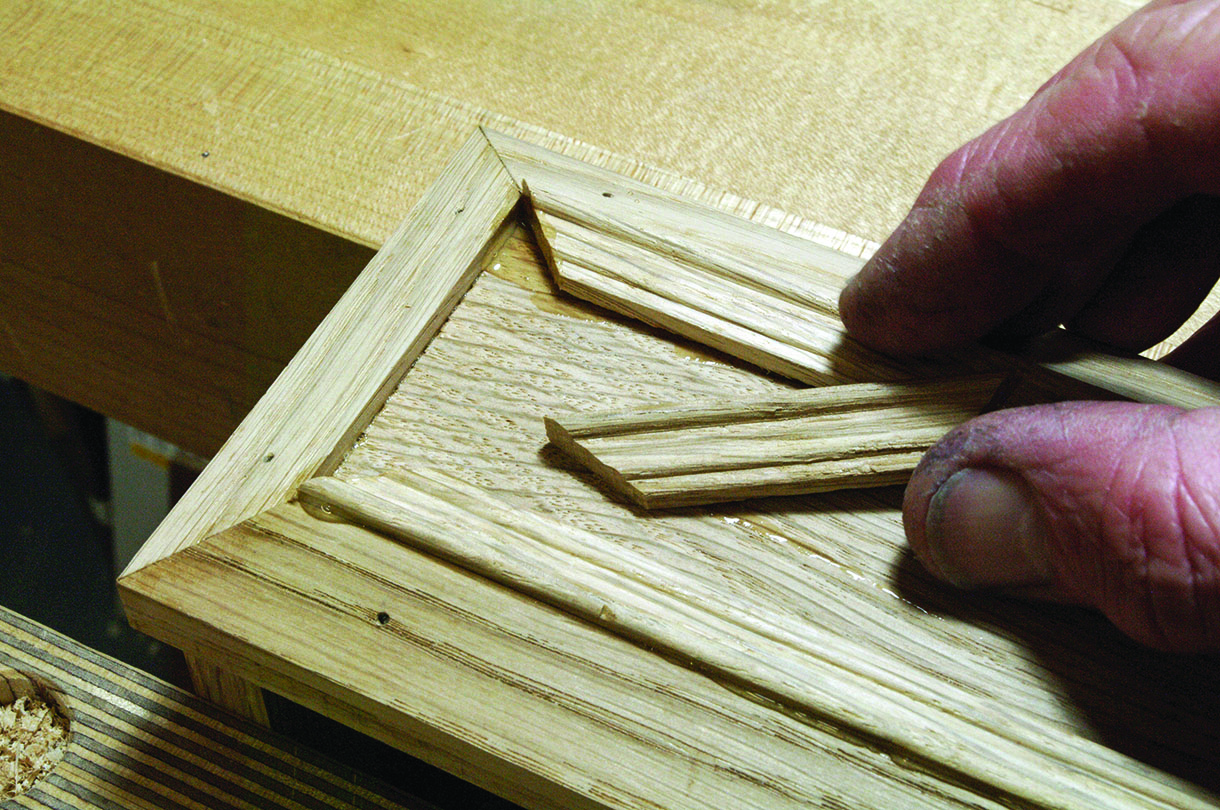 The effect of these twin cushions is actually very pleasing, the light catches all of the many facets and changes in level. Perhaps it’s an idea that could be brought up to date, although I might combine it with a few more dovetails at a slightly finer pitch for the drawer construction, but actually I quite like the difference in size and shape, perhaps modern furniture making is getting just a little too preoccupied with precision and symmetry.
There are a few obvious, potential shrinkage issues with applying any moulding across the direction of the grain of a drawer front, but at least it’ll give furniture restorers of the future a potential source of income.