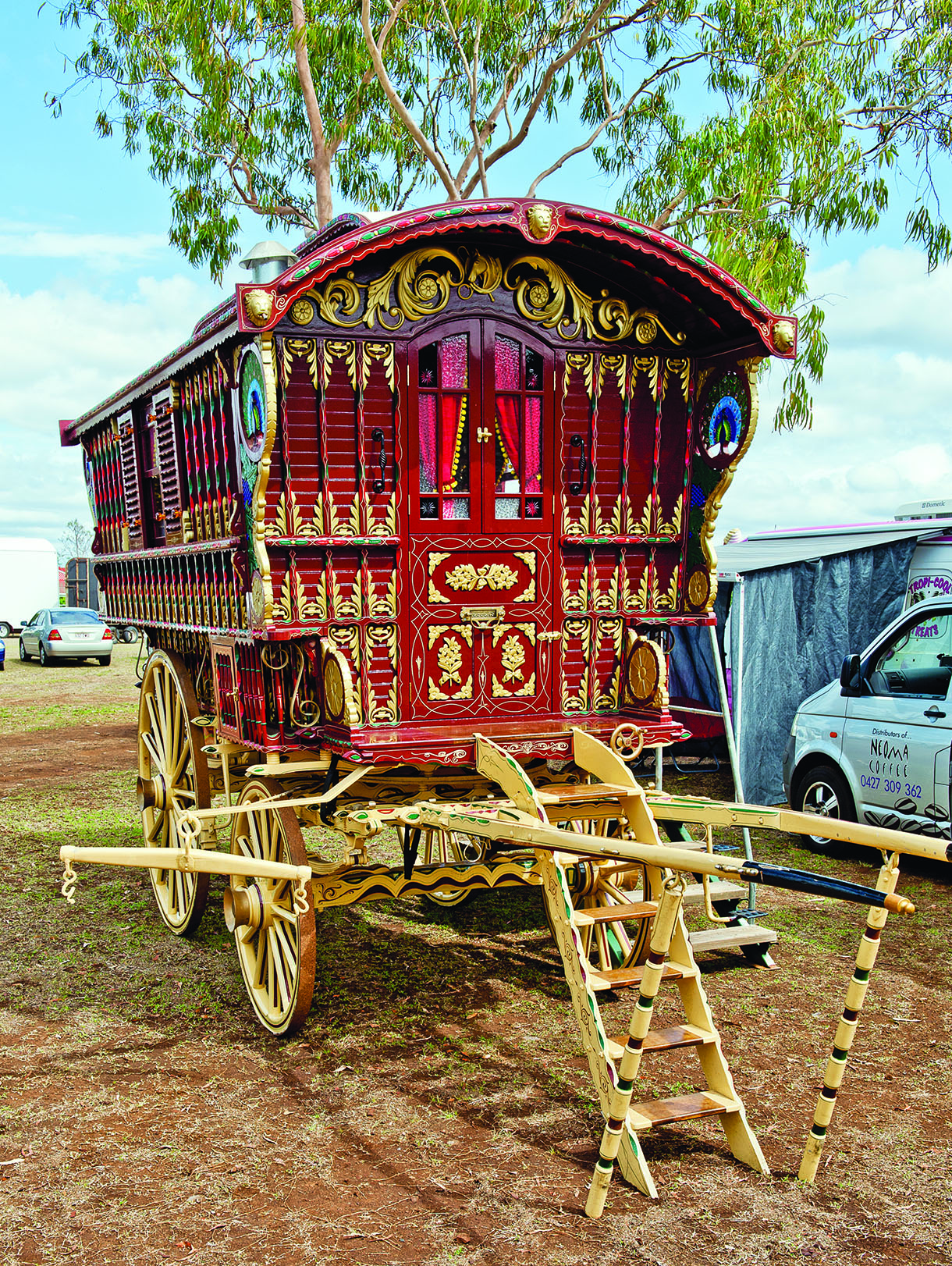 Out of the blue in July 2010, I had a phone call from an unknown fellow called Harry Howarth who had been told by the local tool shop owner that I ‘was the bloke who would help him out’ with his project. He asked if I could do some carvings for him on a gypsy wagon. I was not familiar with this type of wagon, but having recently completed carvings for a reconditioned 1860 German horse-drawn hearse, I assumed that this project would be similar and as straightforward. I replied that I would be glad to help him out. Little did I know what was coming my way! Harry arrived at my workshop later that day with the plans for a Dunton & Sons 1914 Ledge Wagon, which he wanted to be built, as it would have been in bygone times, without using any electrical tools! Needless to say I was stunned with the number of ornate carvings required with this commission for both inside and outside of the wagon.
Harry’s dream was to enter his horse-drawn gypsy wagon in the many heavy horse agricultural shows that occur regularly around Australia. Marks are awarded by the judges for both horse and wagon. He put the cart before the horse and enthusiastically asked me to go ahead with the project before he had even purchased a suitable Clydesdale horse to do the hard work. I am not altogether sure that he fully understood just how long it would take to build the wagon, complete the carvings, and have a sign writer work his artistry.
Starting the carvings Bill Ross, an experienced Queensland wooden boat builder, travelled around the UK and liaised with the local gypsy wagon restorers. He found out all he could on Ledge wagons and returned, with much enthusiasm, to start work on the body of the wagon. Meanwhile I had studied the plans carefully and submitted many drawings of my ideas for the external carvings. Along with the traditional carvings of shutter stops, corbels, ivy leaves, grapes, acanthus leaves, horses, gargoyles and gryphons, Harry had requested that I incorporate as many birds as possible, as exotic birds are a passion of his. Thus the peacocks became the feature of the porch brackets.

External carvings
My task of carving and turning the embellishments for the wagon in Australian white beech (Gmelina leichhardtii), took the best part of four years, working intermittently with other commissions. I began my part of the project with the easier external carvings, comprising 1,008 birds, leaves and
c-scrolls, which I was informed by my colleagues, were more monotonous to paint than to carve! These were then fixed to the painted body of the wagon. I was on a roll! I then carved the six gargoyles for the drainpipes and two gryphons for each end of the central bolster of the undercarriage. My confidence was growing! I then concentrated on the two, 2m wide by 450mm deep by 40mm thick, crown boards above the front door and rear window. These comprised of acanthus leaves and horses’ heads. Next came the most challenging part of the commission: the four double-sided porch brackets, 500mm wide, 1.2m high and 40mm thick, decorated with peacocks, grapes, grape leaves and Tudor roses. This demanded much concentration and carving on my part. The external carvings were finally completed in July 2012. My work was done for the moment. The task of assembling the various components of the wagon took several weeks. It was the artistry of the sign writers/pin stripers, Ian Stewart-Koster and his son Andrew, that brought colour to the project. 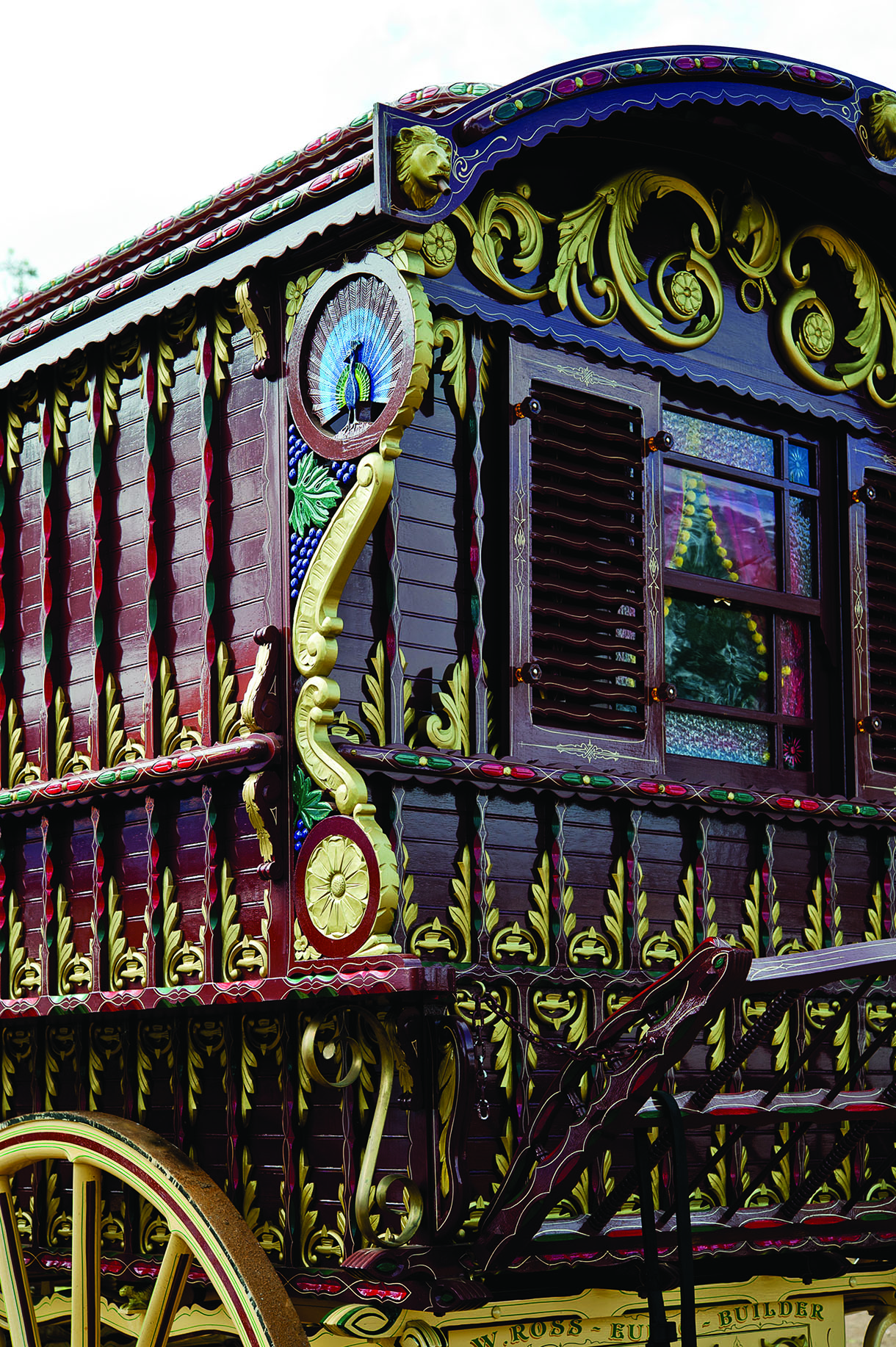 Detail of rear crown board and porch brackets 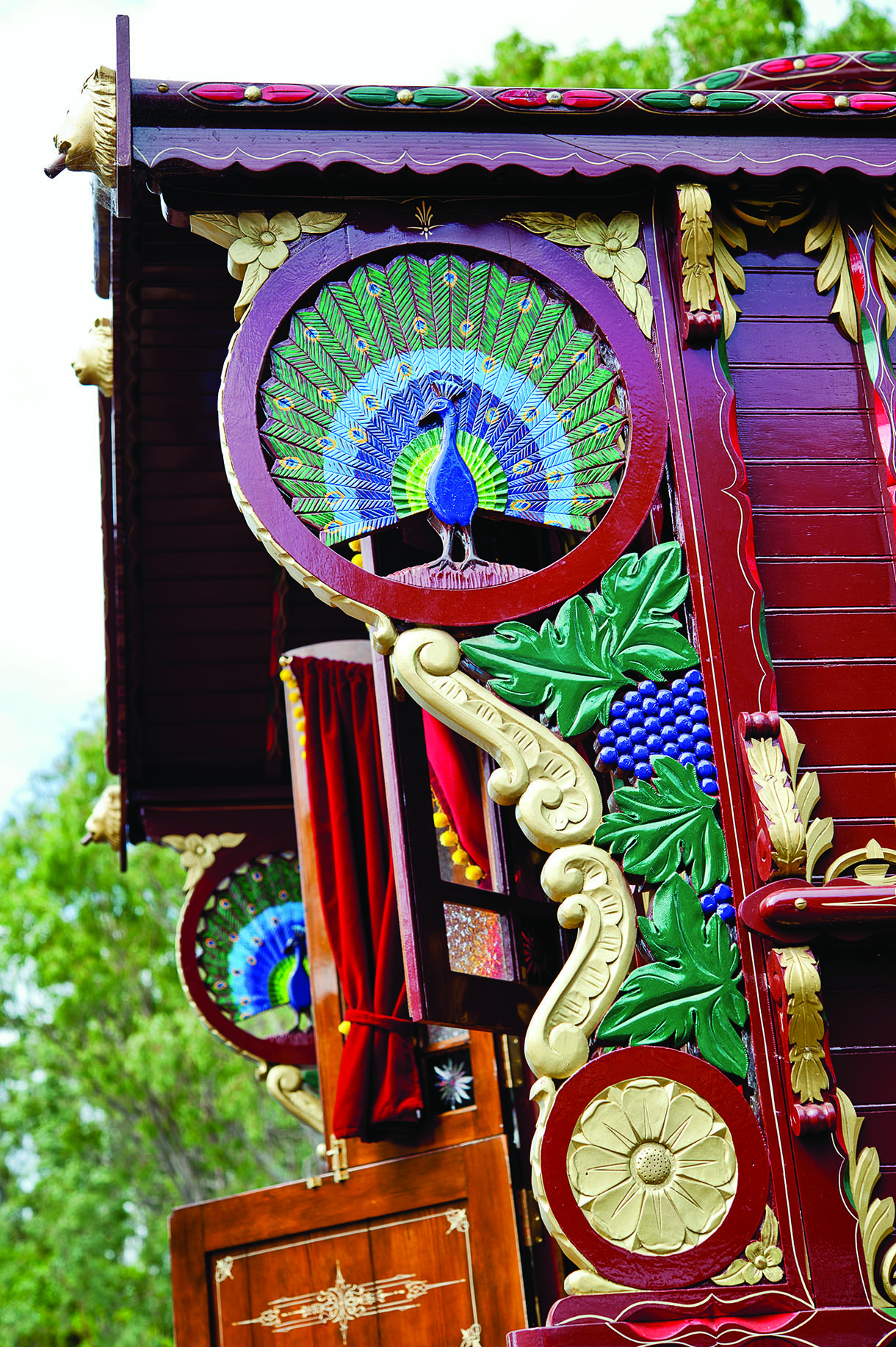 Interior carvings
Harry researched on the internet for the finalisation of the wagon and subsequently sent to America for the wheels and the cut glass mirrors for the interior. The handmade German glass windows were etched in Tasmania. At last the exterior of the wagon was completed. Early in 2014 Harry approached me to complete the internal carvings. The carvings around the fireplace were branches of leaves, which totalled about 2.5 metres in length, 50-100mm wide and 12mm thick. There were two larger carvings one above the door and the other above the bed space, 2m wide by 450mm deep by 12mm thick. These comprised of ivy leaves, roses and fruit. I carved around 1,500 separate carvings in total. This challenging project was finally completed both inside and out in November 2014 and was ready for display at the upcoming summer agricultural heavy horse shows. Harry was a happy man! 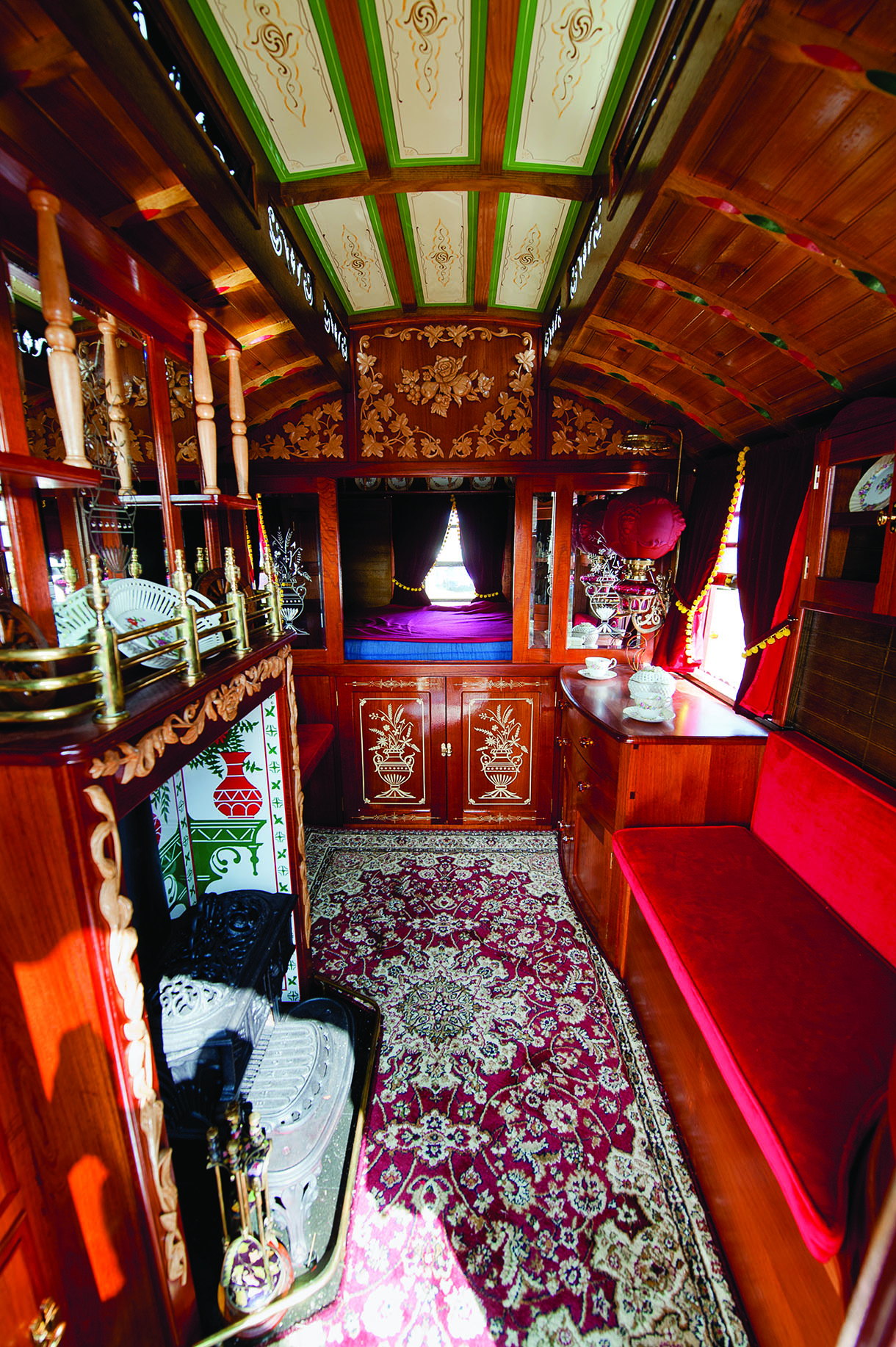 Interior details, around fire place, and panel above bed space 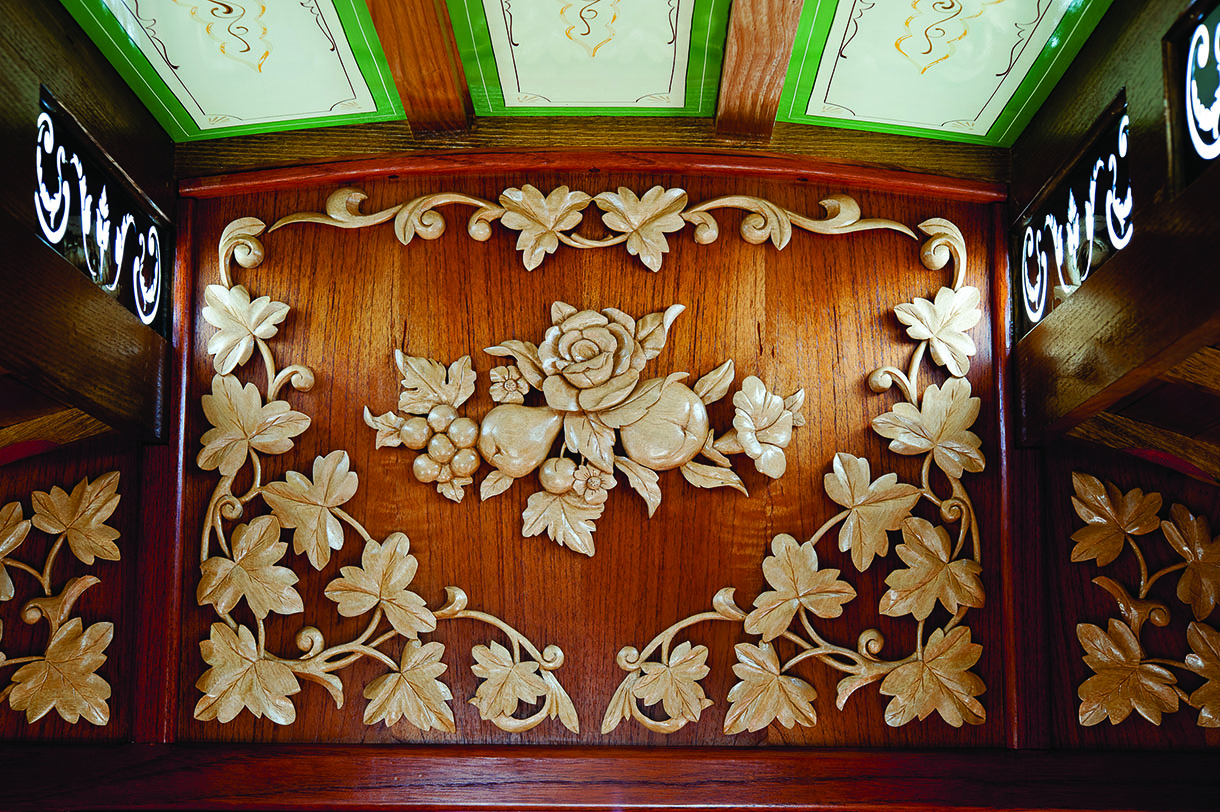