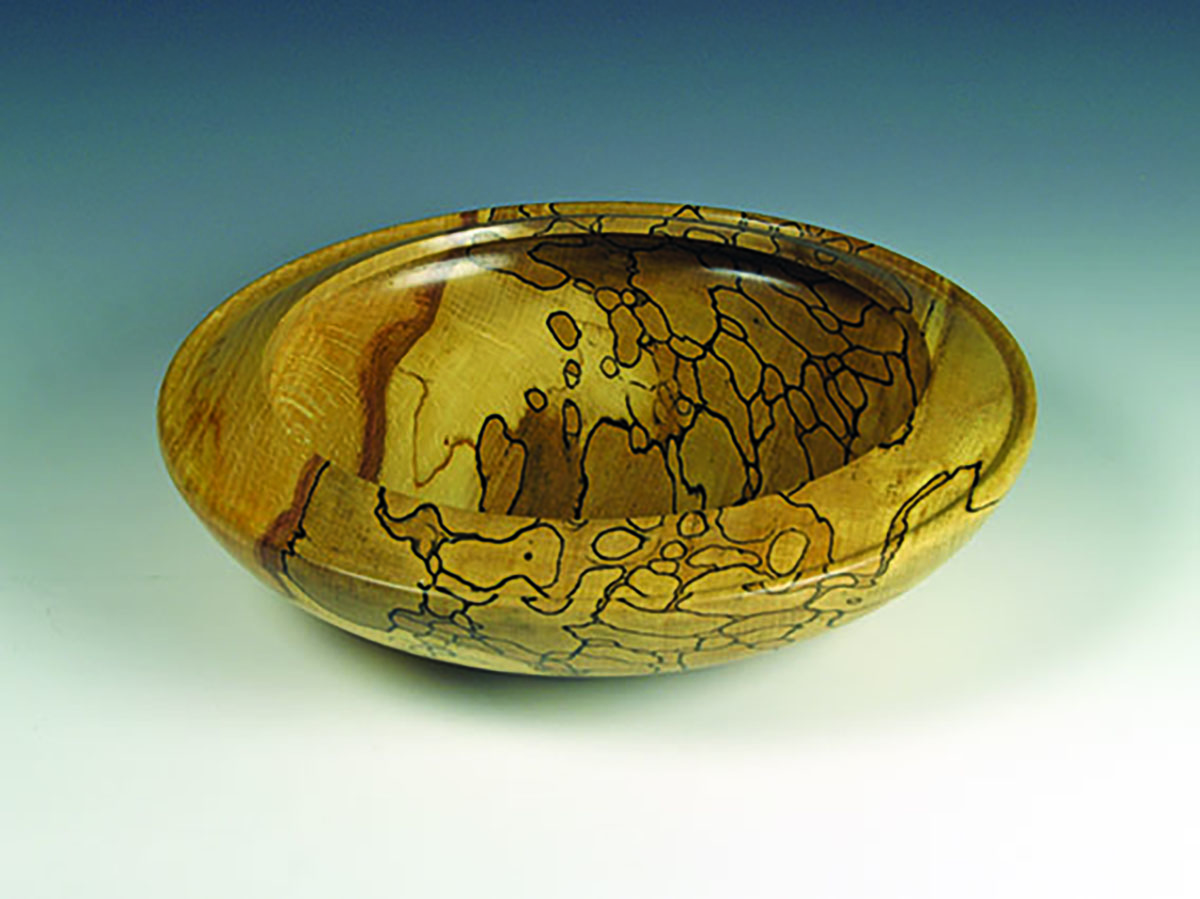 Large and impressive trees, beeches (Fagus sylvatica) often show themselves off well by preventing other plants from growing beneath them. They prefer a well-drained soil and then take even more moisture from it by means of their dense root systems. This, and the deep shade cast by their extensive leaf canopy, can make the area beneath them inhospitable to all but the toughest of other plants. Beech trees seem equally at home in woodland or parkland and the biggest examples are often to be found where there are no competing trees nearby. In these more exposed positions the trees may develop significant buttresses at the base of the trunk, perhaps to better withstand the onslaught of winter gales. Amongst our most common trees, beeches are encountered on almost any walk in town or in the countryside, and they contribute much to the tranquillity of many a country footpath. Beech’s pinkish-brown timber has a close, even texture with a tight grain that works easily and will take fine detail. It is widely used for furniture and is an ideal wood for turning. In the kitchen many small utensils such as spatulas and spoons are still made from beech and in the past it was widely used to make bowls, platters and plates for domestic use. Beech is particularly susceptible to spalting, a fungal attack that leads to the formation of irregular black lines and areas of pale creamy coloured wood. The fungal attack only occurs in timber with a high – greater than about 20% – moisture content, and stops when the wood dries out. Spalted timber is much prized and may command high prices, but if allowed to spalt for too long it becomes soft and crumbly and almost impossible to work to a good surface finish. 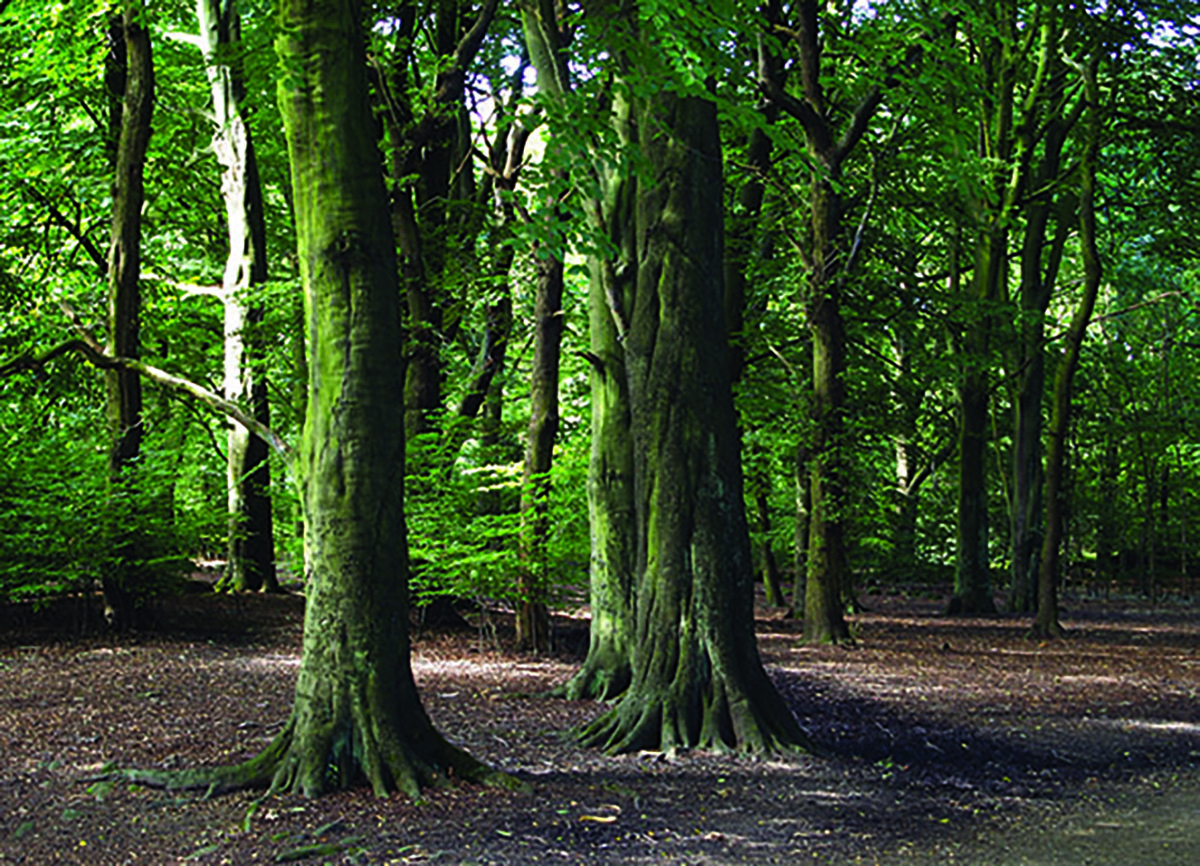 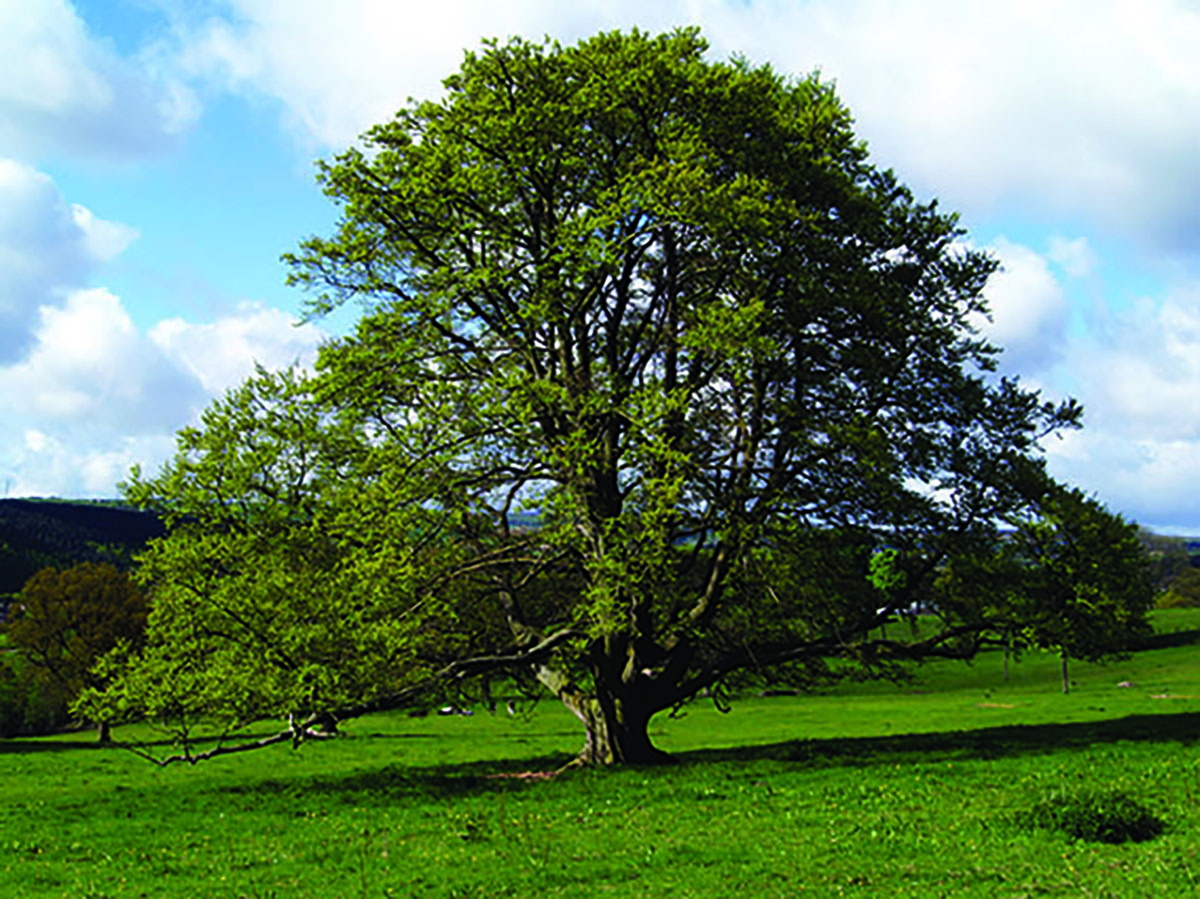 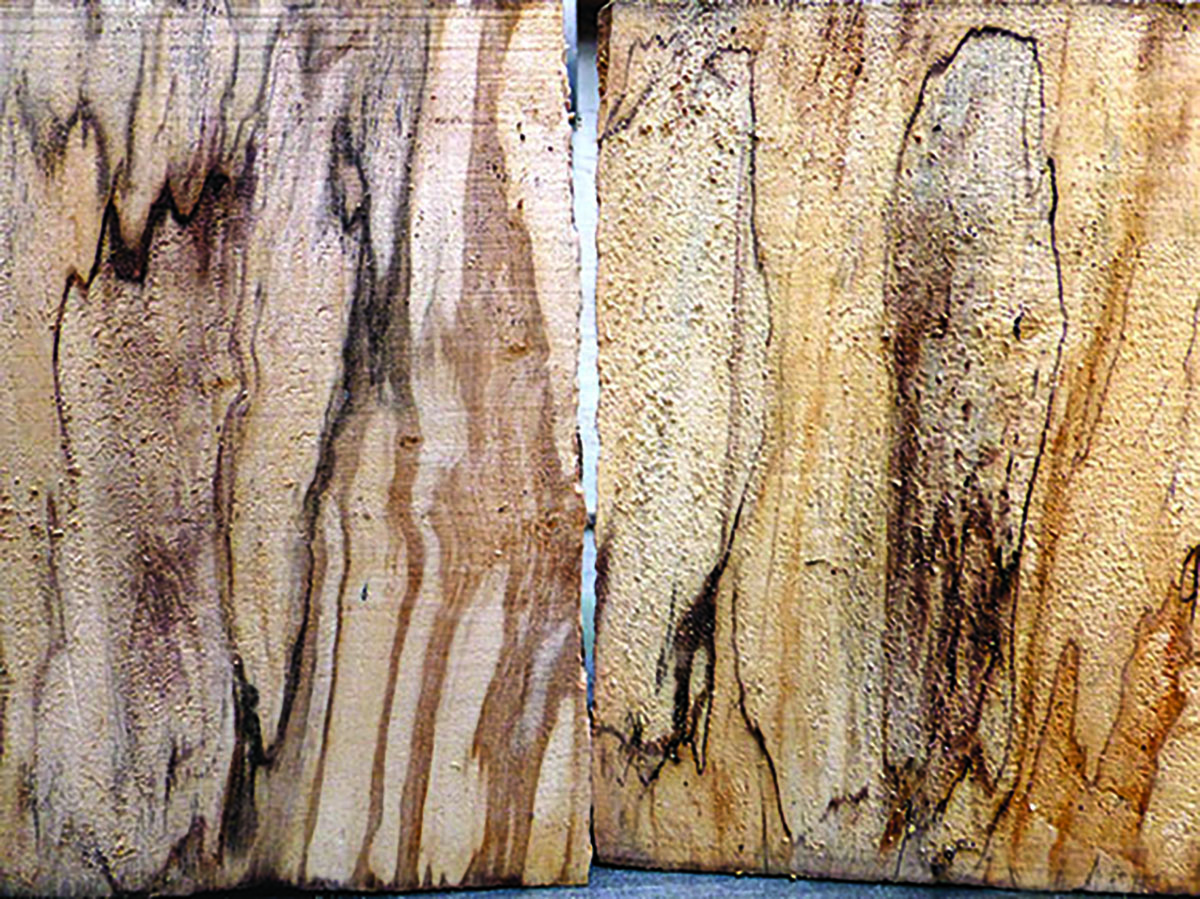 Beech is susceptible to spalting 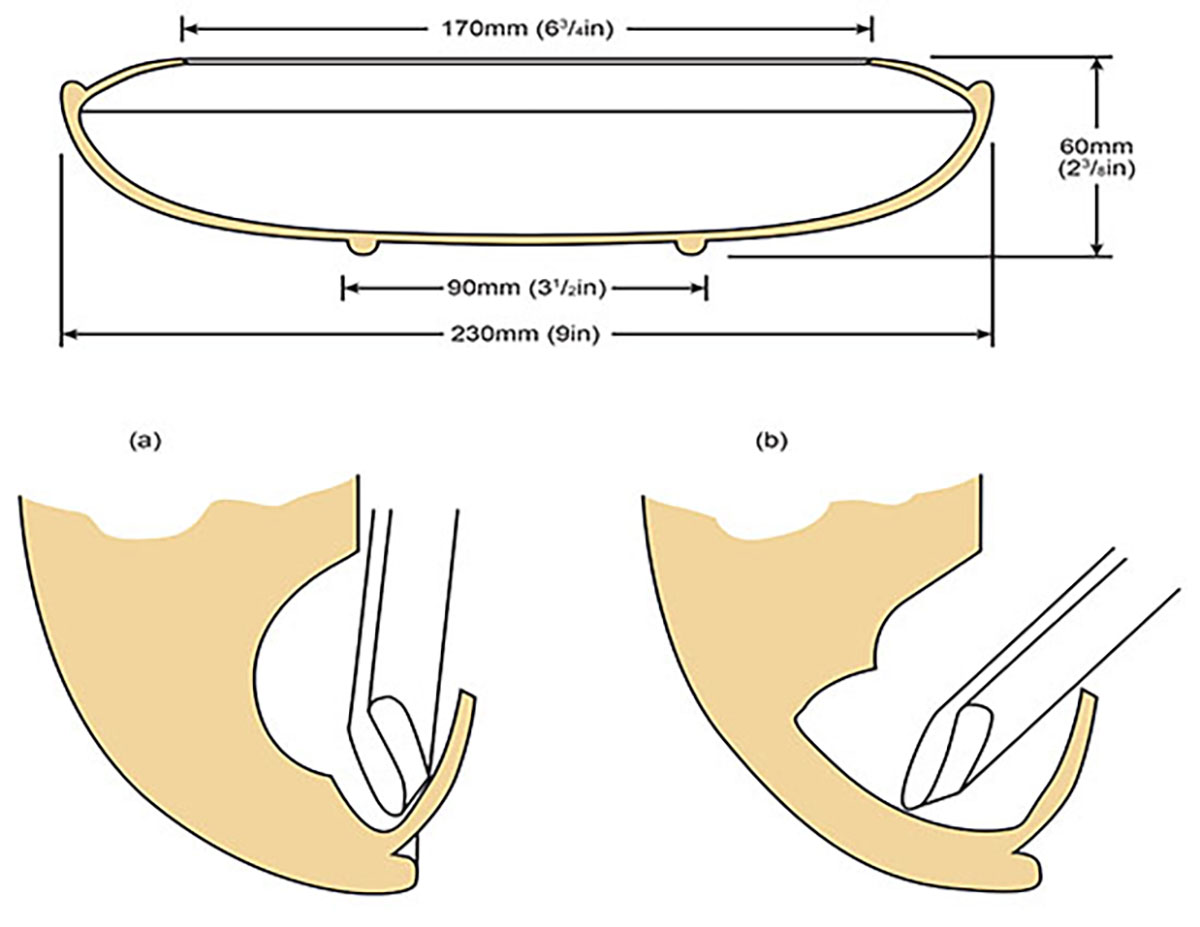 Measuring and starting to turn
1. My blank was approximately 75mm thick and 240mm diameter. After measuring the blank I was able to sketch out the design I had in mind, and add a few simple measurements – see the diagram above. Mount the blank on an 8mm screw held in the chuck jaws and turn it fairly quickly to round with a 13mm bowl gouge. This will reduce the diameter to the final 230mm 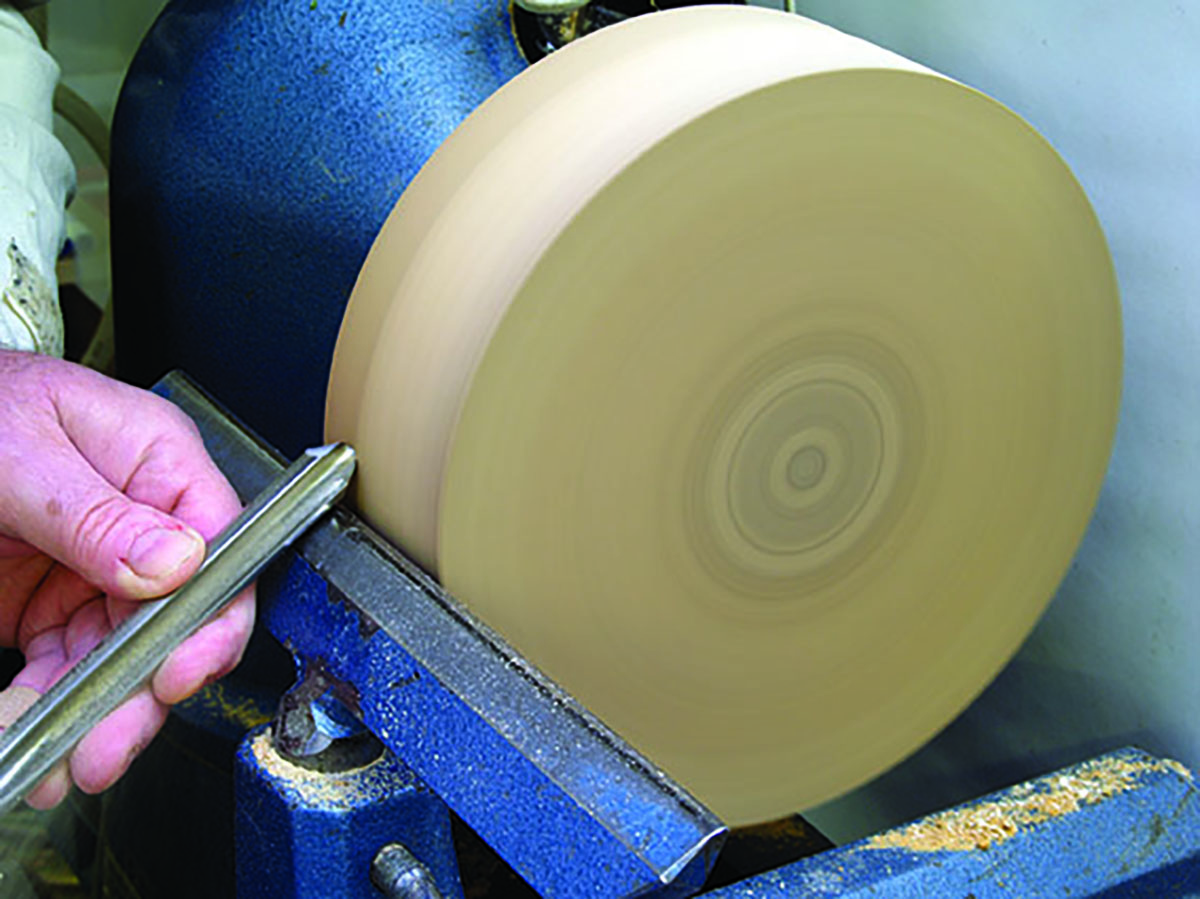 Shaping the underside
2. As this is a reasonably thick piece of beech you can afford to cut the spigot directly into the blank. Having removed the waste wood with the bowl gouge, the spigot is converted into a dovetail using the long point of the skew to form the angle 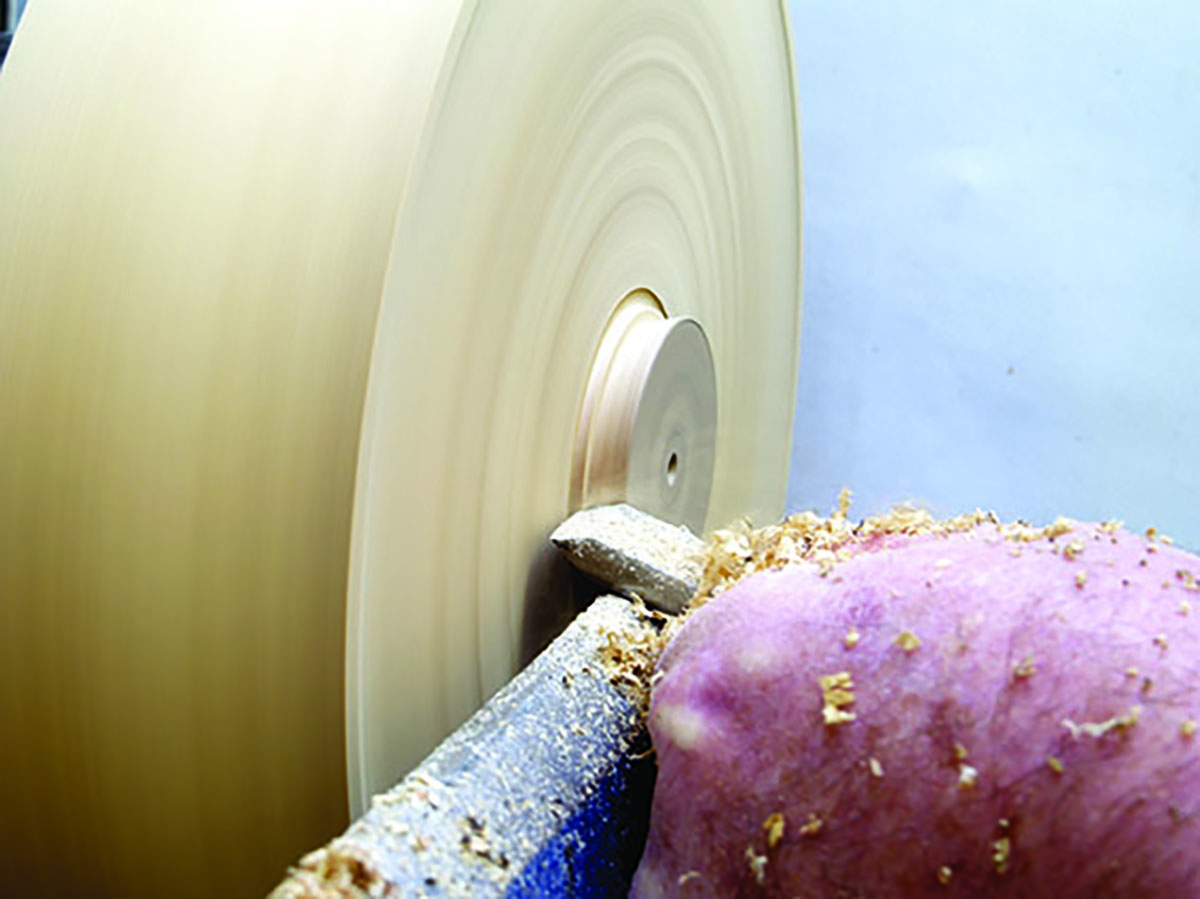 3. I like to make the foot of a bowl about a third of the overall diameter. Mark out an approximately 75mm circle and use a 6mm bead forming tool to cut a neat round bead into the blank. I used an Ashley Iles bead forming tool, which I find very useful for forming beads simply and accurately. Working carefully, remove the waste outside the bead, down to the level of the bottom of the bead 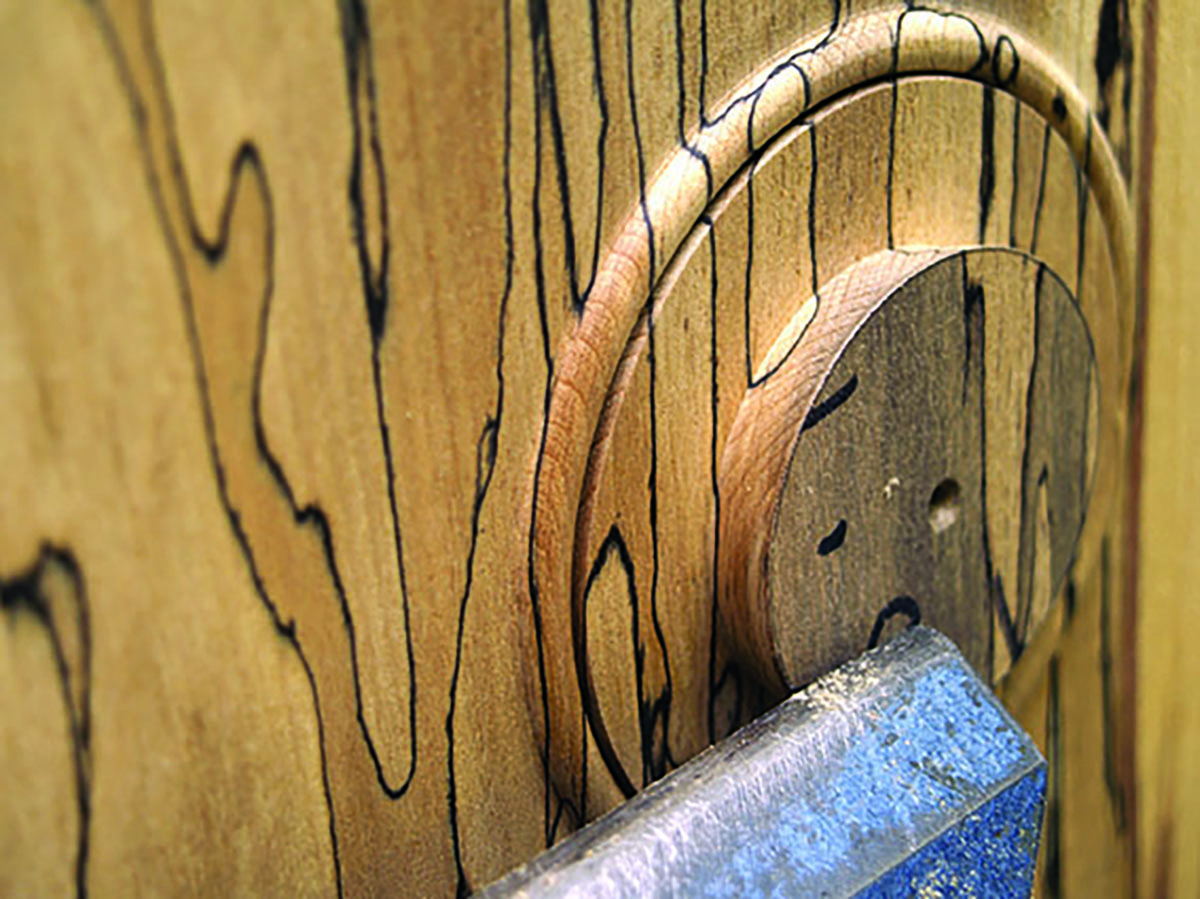 4. Bearing in mind that the opposite face of the blank has yet to be trued up and making an allowance for this, mark a line on the edge of the blank to represent the bowl’s maximum diameter. Then use the bowl gouge to shape the bowl in a smooth curve from the foot to this pencil line 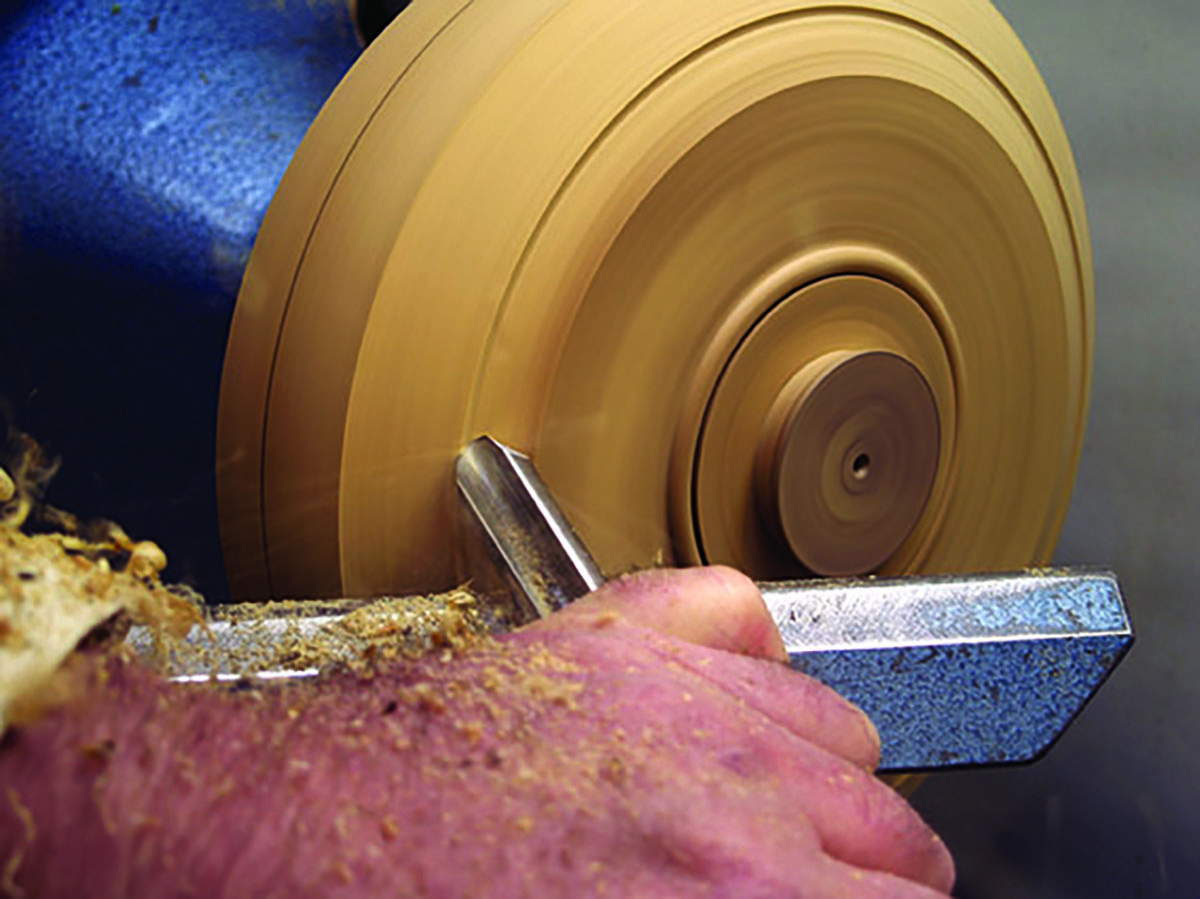 5. This piece is very nicely spalted – good black lines and some colour variation but with no soft or ‘punky’ regions to cause problems. Sand the surface from 120 grit through to 400 grit before sealing and polishing with beeswax and carnauba wax. There are conflicting opinions, and the jury is still out, on whether the fungal spores released by sanding spalted wood are dangerous or not. Why risk it? Wear a good quality mask to avoid breathing the dust 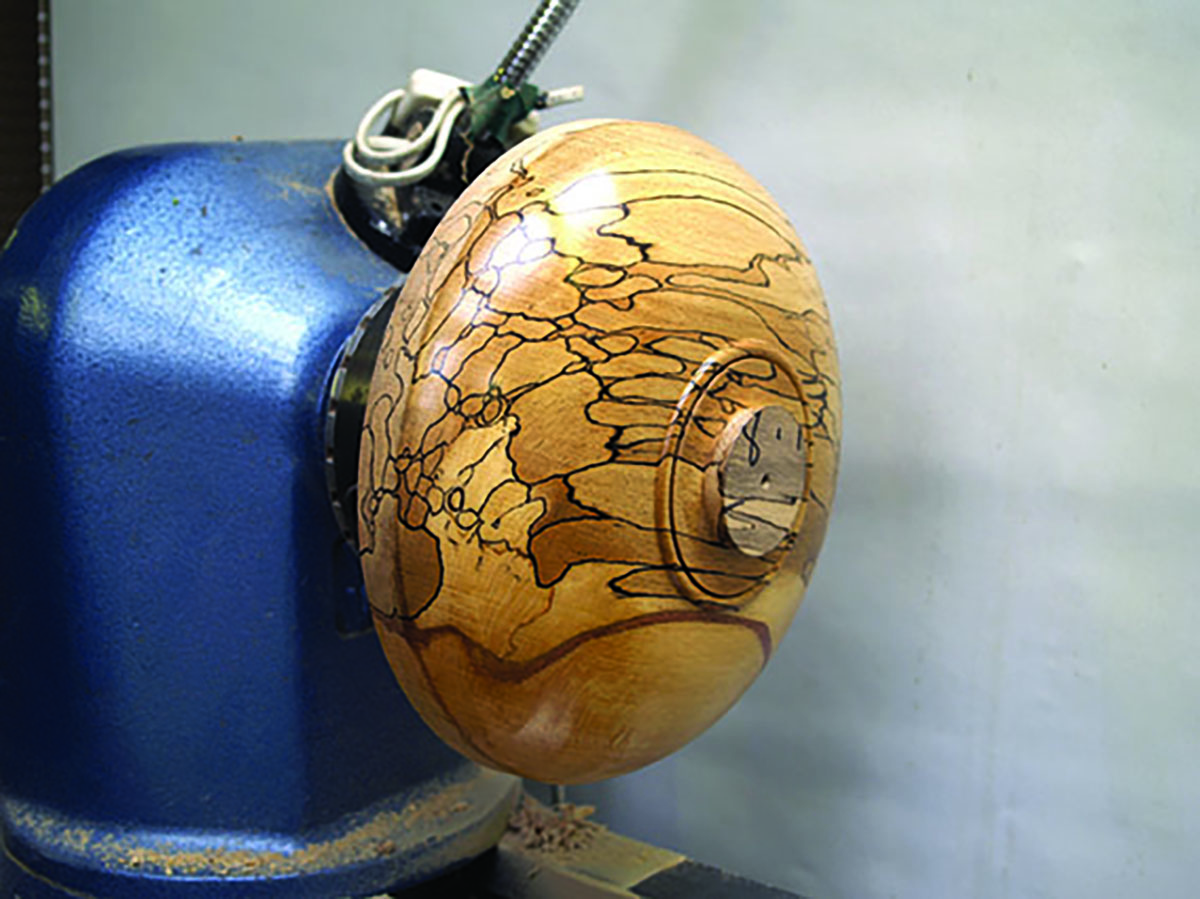 Hollowing out
6. Now reverse the bowl, holding the dovetail spigot in the four-jaw chuck. After truing up with the bowl gouge, the top face is angled down towards the pencil line marked on the edge. Stopping about 3mm or so above this line, use the 6mm bead forming tool to form the edge bead of the bowl 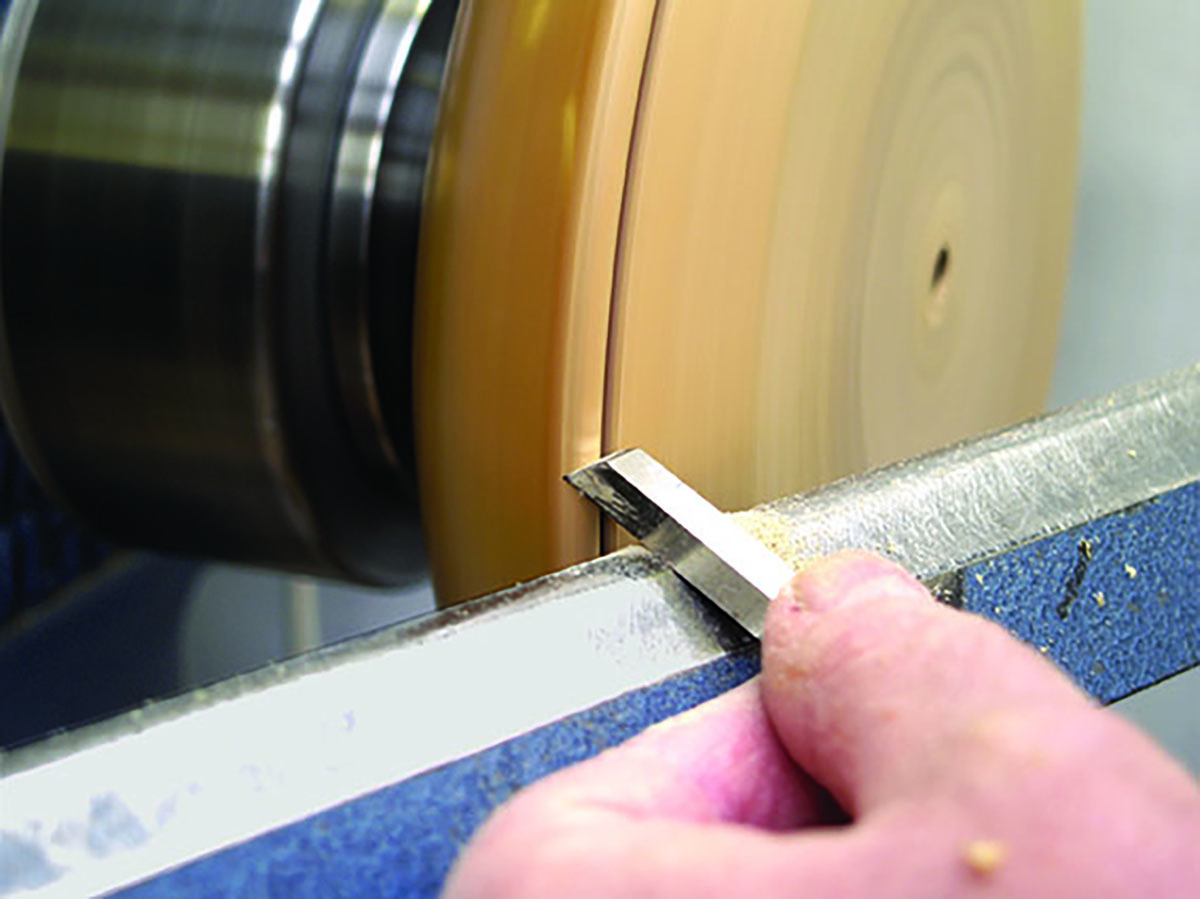 7. Use a smaller 6mm bowl gouge with a swept-back grind to shape the rim in a gentle curve down to the bottom of the bead. Note the bevel is in contact with the wood and the flute is pointing to about 10 o’clock. Cut slightly to the left of the tip. Sand the bead and the rim to 400 grit before continuing. This is the time when the rim has its maximum support and I always think it best to finish as much work as possible on it at this stage 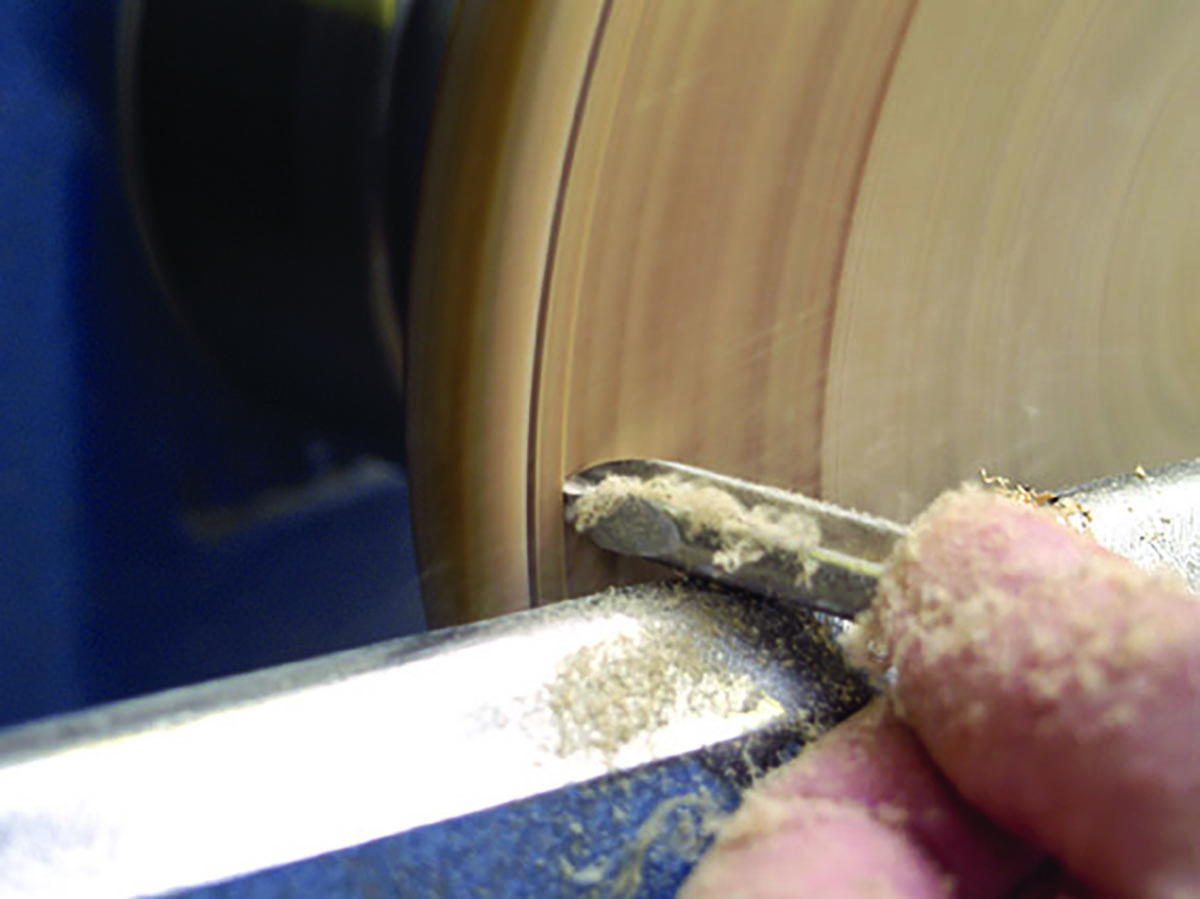 8. When starting a hollowing cut with a bowl gouge, encourage it to go where you want by making a starting groove with the long point of a skew chisel. Make a few preliminary hollowing cuts with the 13mm bowl gouge. Now we tackle the large undercut. Note there is still a considerable amount of wood in the centre of the bowl to give it rigidity while you are working near the edge 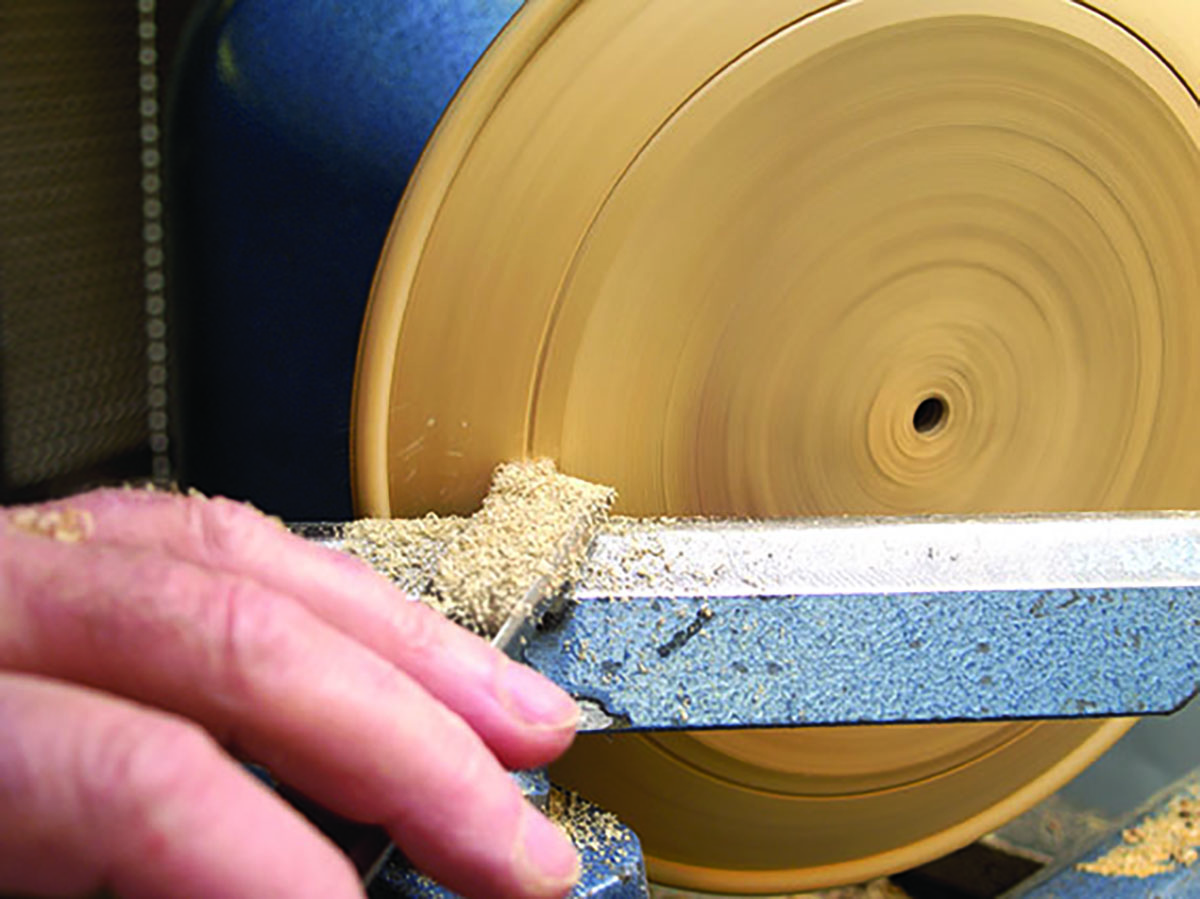 9. Use the 6mm bowl gouge to make the initial cuts down the inside of the rim. Now the flute is in the 2 o’clock position with the bevel in contact with the underside of the rim. Press the gouge gently in and to the right. The gouge removes wood fairly quickly and easily with the bevel in contact on the underside of the rim – see diagram (a) – but soon there is a need to work further down the lower curve of the bowl. The gouge cannot easily be used to do this, and diagram (b) illustrates how the shape of the rim makes it impossible to cut across the bowl with the bevel supported. In this position there is little control over the tool other than a strong grip on it – this is a catch waiting to happen 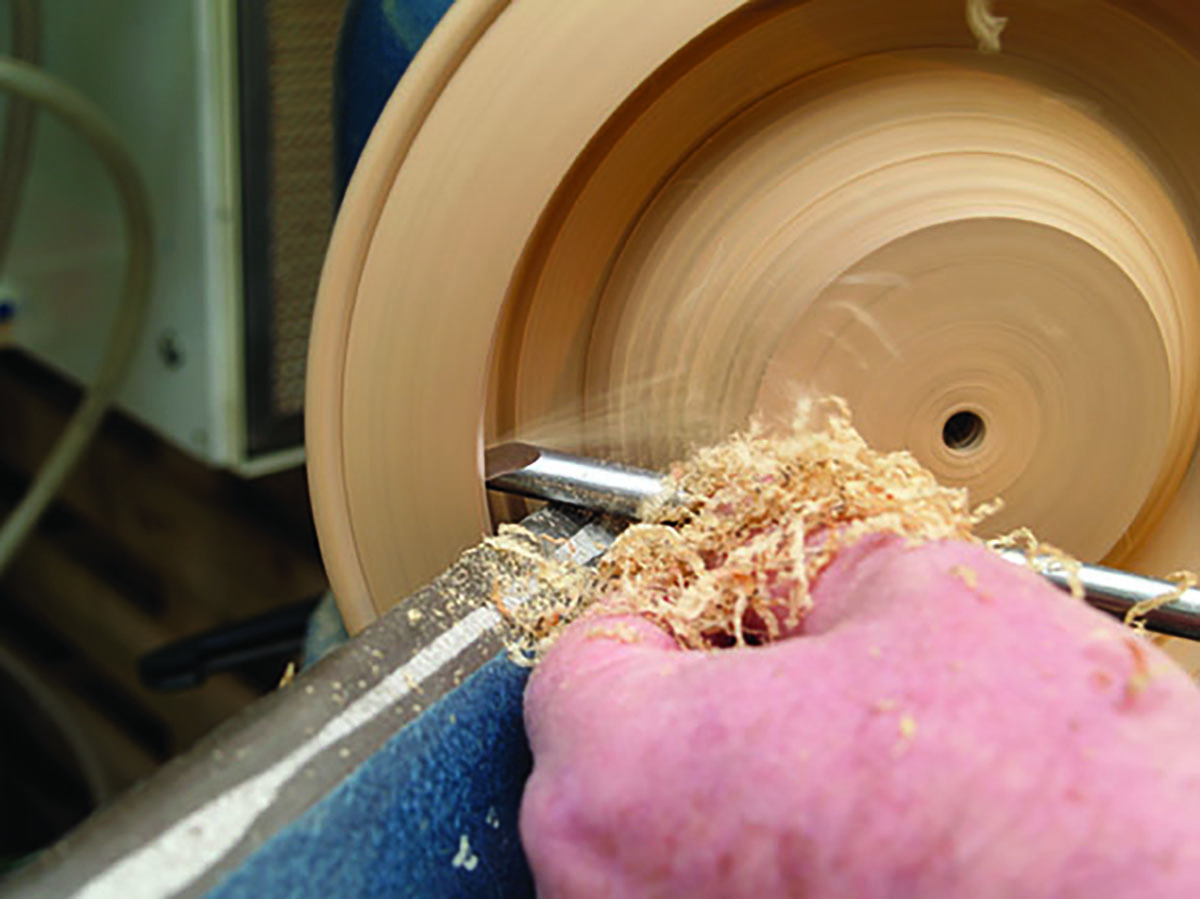 10. Scrapers, on the other hand, are designed to be used with no support from the bevel, and so the small gouge can be replaced with a homemade 6mm scraper. This tool is used to gradually extend the cut sideways towards the bottom of the bowl until there is enough room to present a bowl gouge correctly 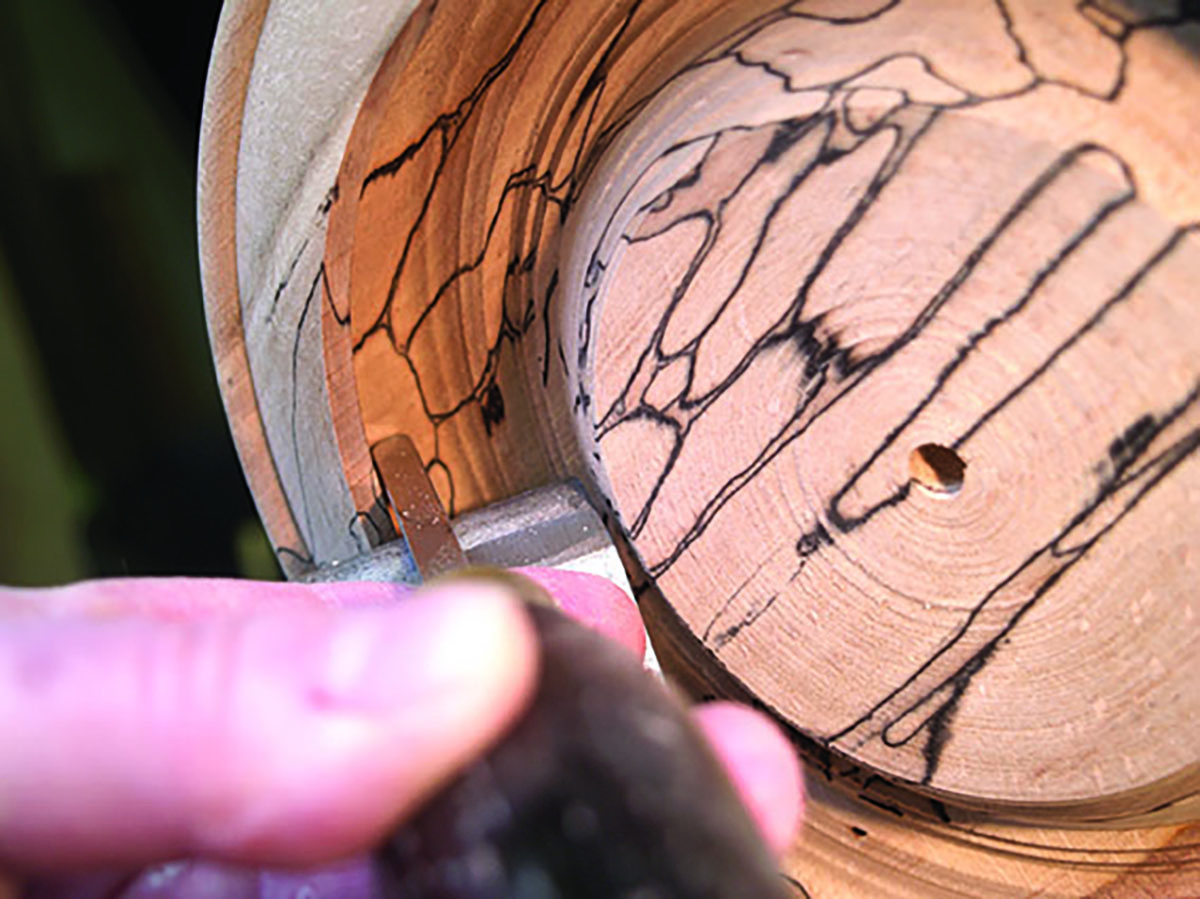 11. Reverting back to the 13mm bowl gouge, remove the waste from the centre of the bowl, although access near the rim is still very limited; I had to leave a ‘bump’ for removal later 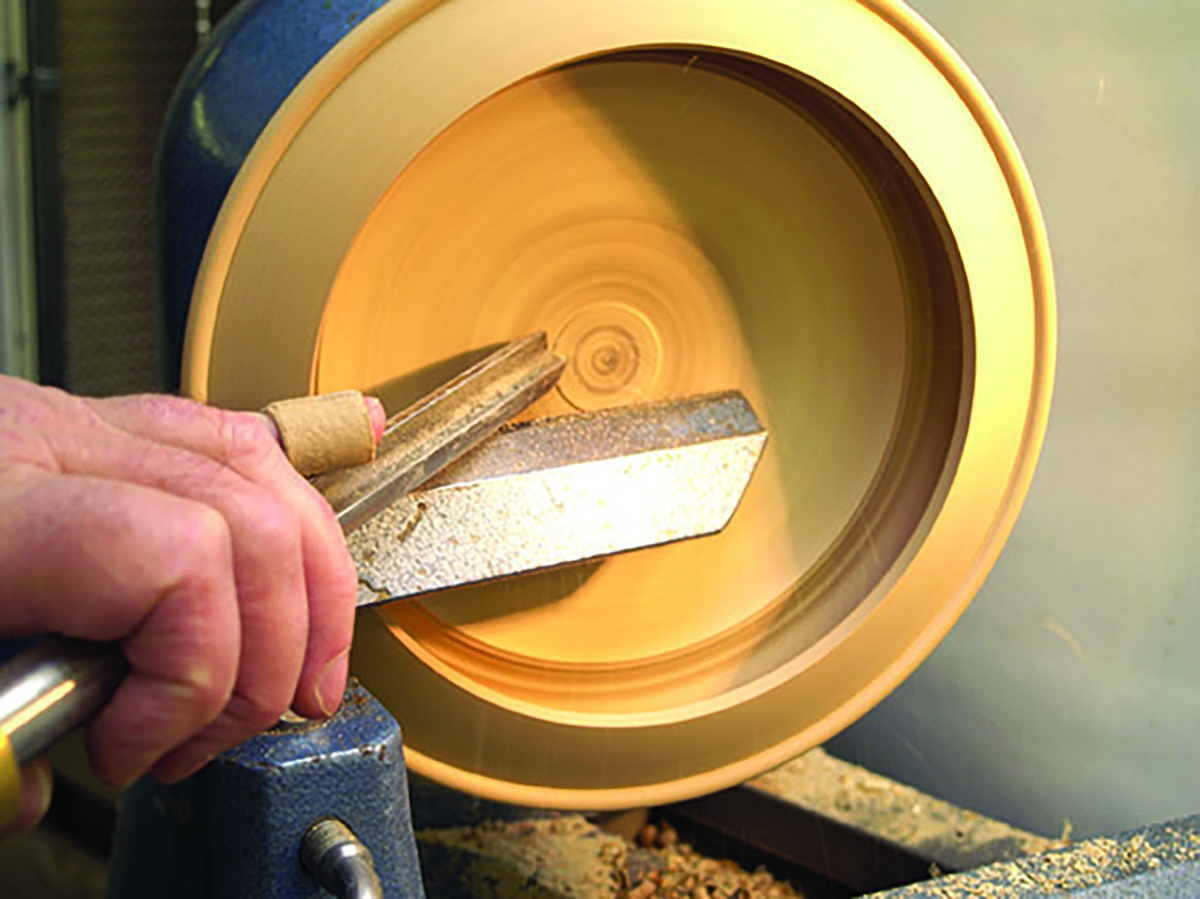 12. With most of the waste taken out of the bowl centre, the bump was removed by light cuts from scrapers, finishing up with the final cuts from a large 38mm scraper held horizontally with the cutting edge exactly on centre height 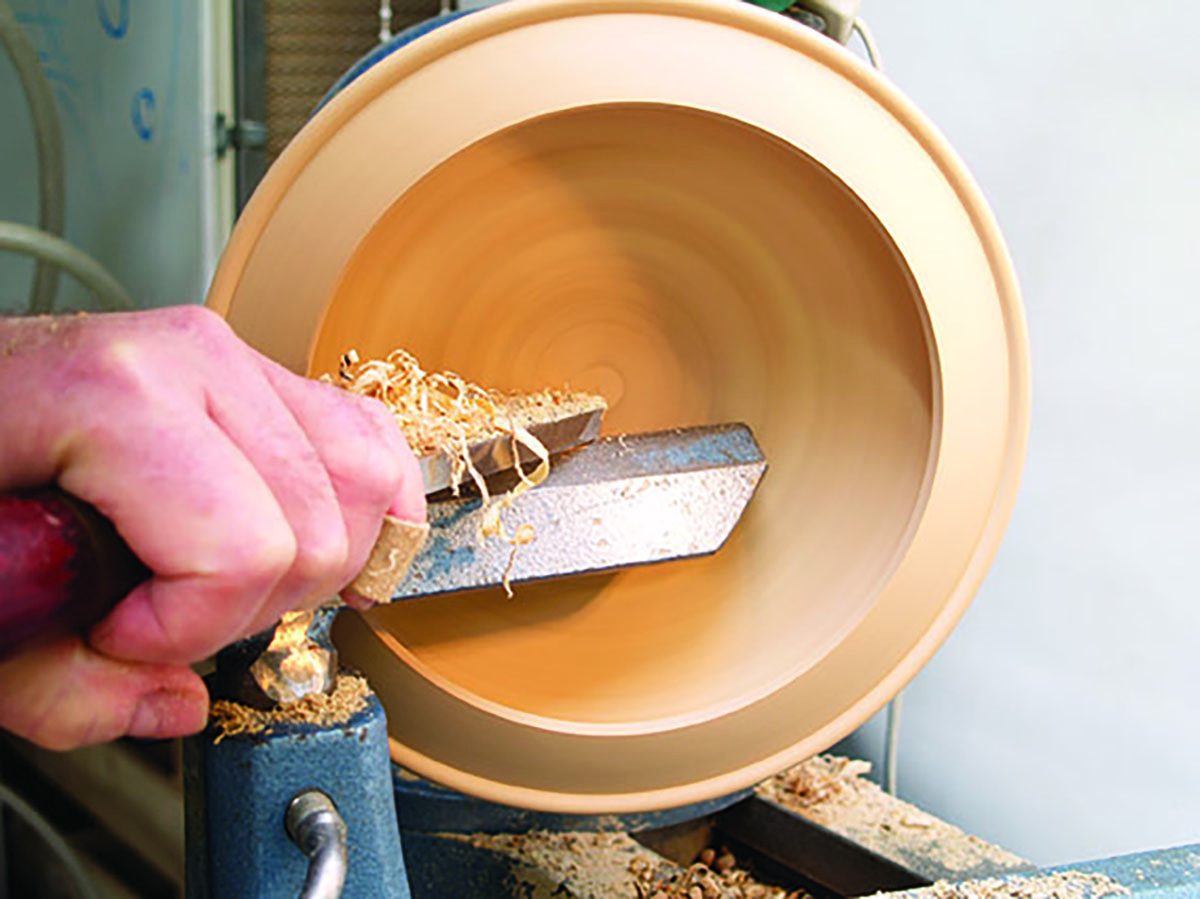 13. Use callipers frequently to check the wall thickness and keep it fairly even, and take care to make sure that the transition from the rim curve to the bowl curve is as smooth and ‘bump free’ as possible 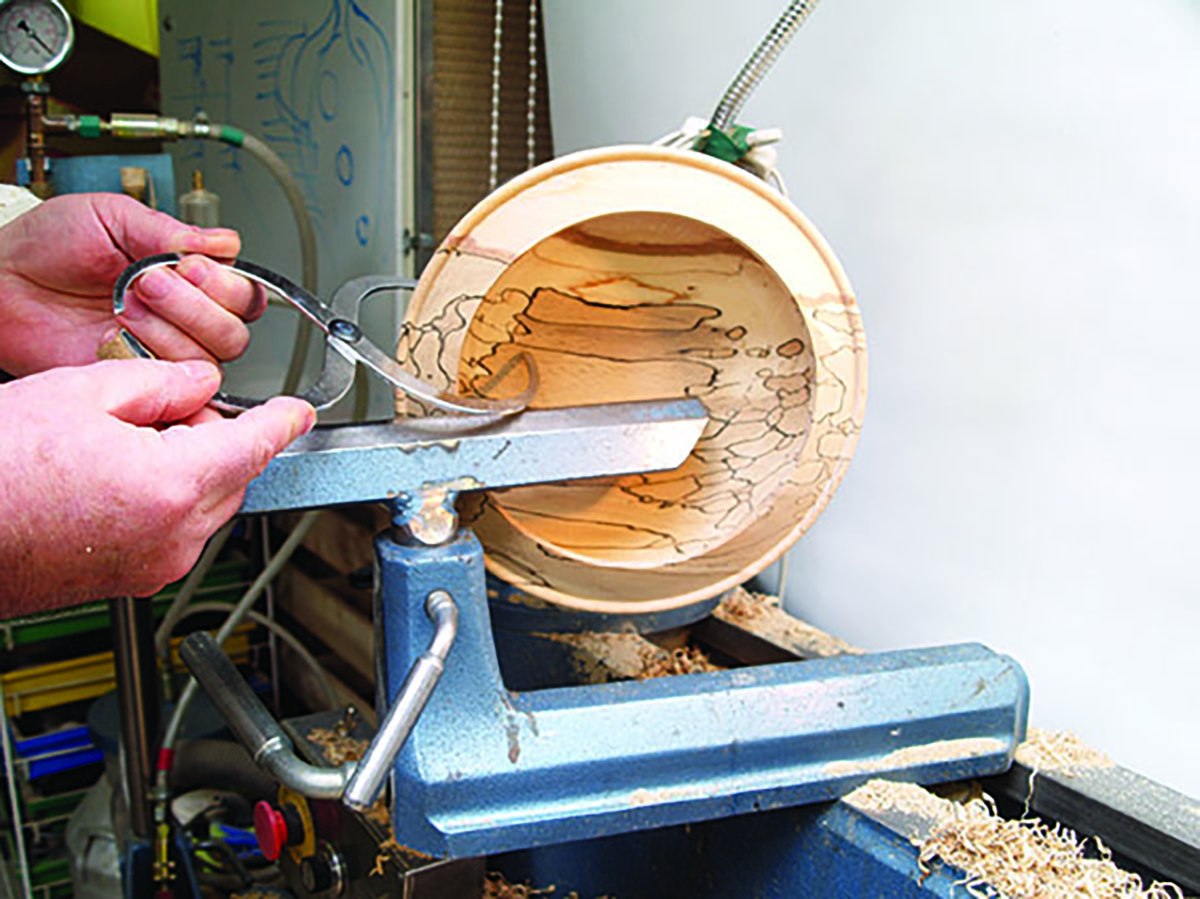 14. Hand sand the underside of the rim from 120 grit down to 400 grit before power sanding the more accessible interior of the bowl through the same grits. The interior and the rim can then be sealed and polished in the same way as the bottom of the bowl 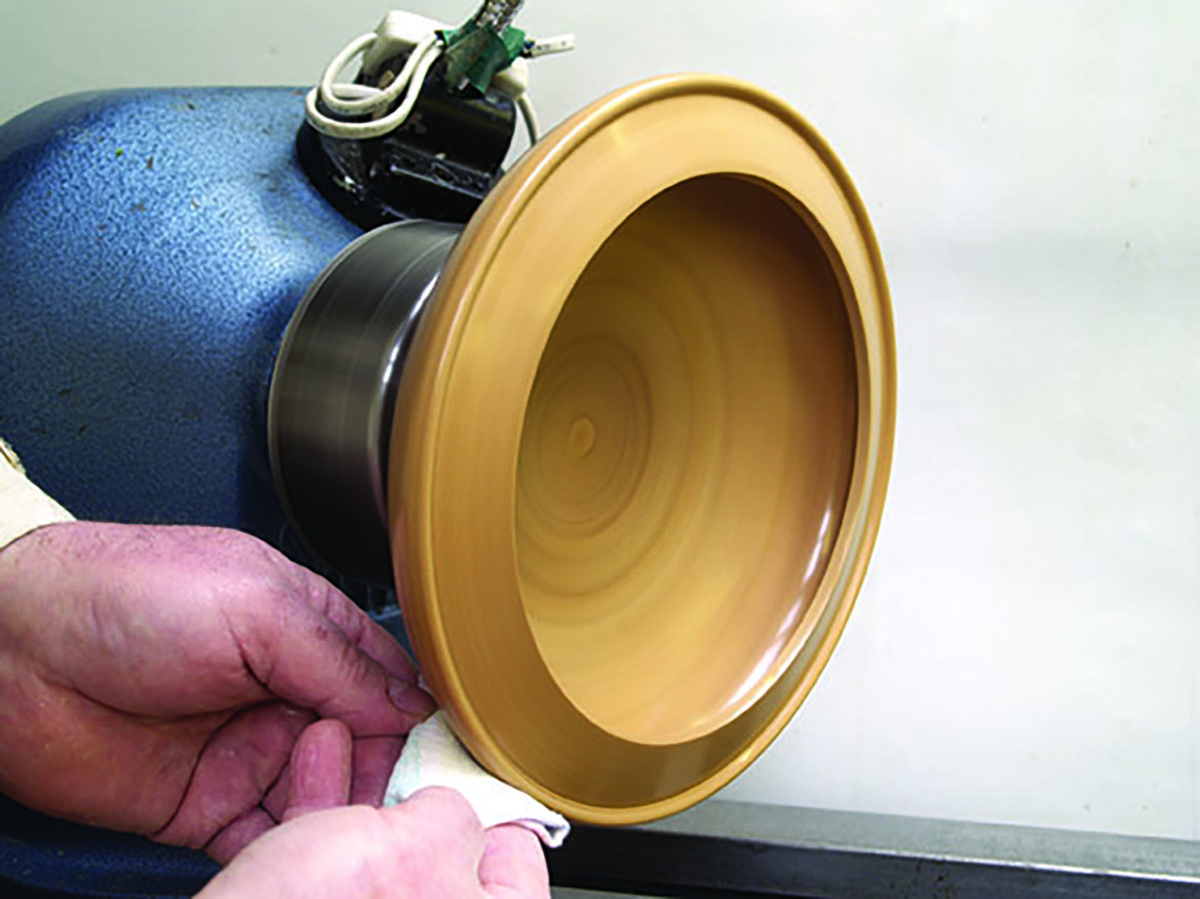 Removing the spigot
15. Finally, reverse the bowl onto the vacuum chuck and remove the spigot and centre of the foot with the 10mm gouge, leaving the 6mm bead standing proud. The final scraping cuts are made with the gouge on its side, using the horizontal lower wing as a scraper. The same job could perhaps be done more easily with a straight scraper, but sometimes the right tool for the job seems to be the one you already have in your hand! A final sanding and polishing finish the job and it can be removed from the chuck 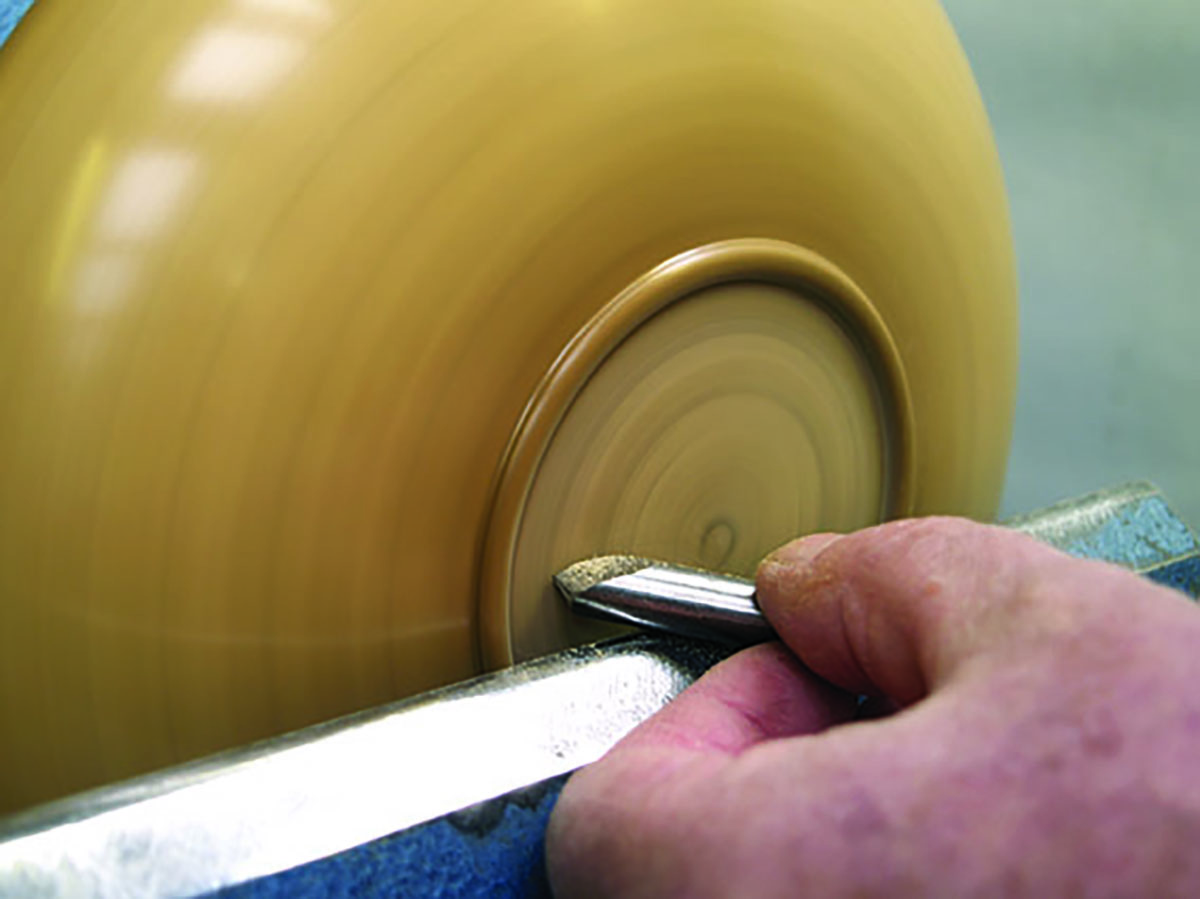 16. The finished spalted beech bowl should look something like this 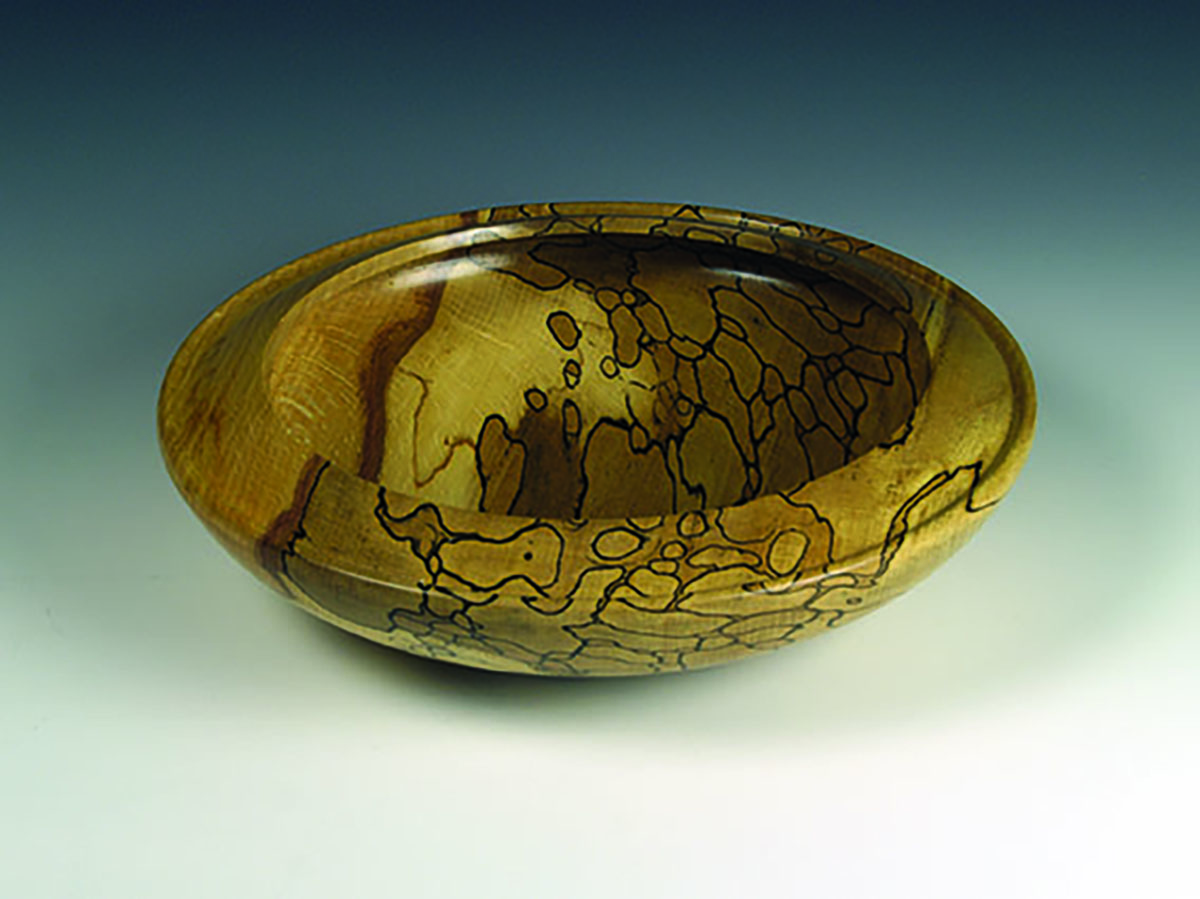 It doesn’t have to be spalted wood…
17, Finding spalted timber at just the right point for turning can be tricky and it is always difficult to predict just what the outcome will be – but of course, that’s part of the attraction. Just as striking and unpredictable as spalted timber, are burrs – or burls – and none more so than those from Australia. Collectively known as ‘Goldfield burls’, they are more tightly formed than our native oak (Quercus robur) or elm (Ulmus procera) burrs with fewer cracks, gaps or splits in them, and they take an excellent finish. With this material you have to take what you can get and pieces are often odd shapes that don’t lend themselves to conventional bowl making 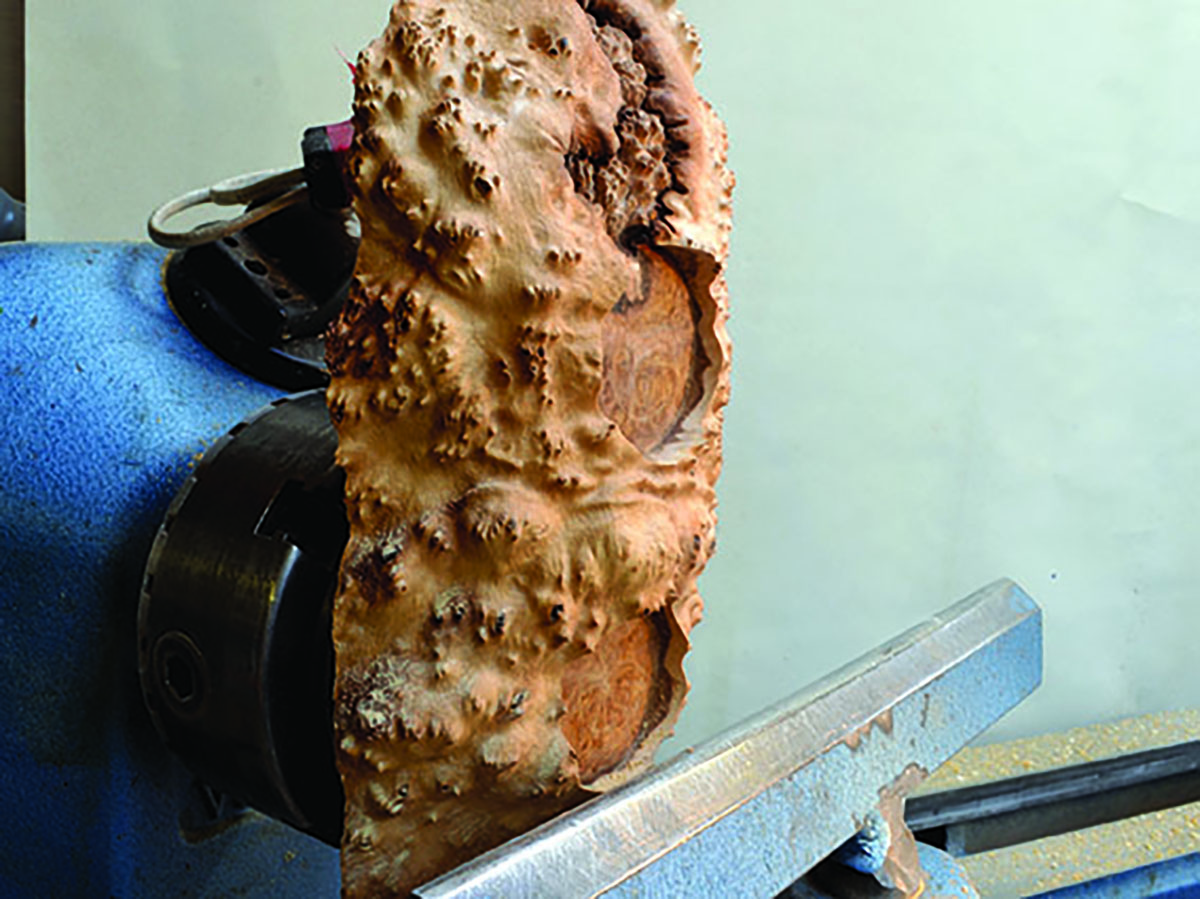 18, This piece of brown mallee (Eucalyptus dumosa) burl was extremely hard and closely knit. Despite drilling the correctly sized pilot hole it was difficult to screw it onto the screw chuck so that holding recesses could be cut in the underside. Reversed first on one recess then on the other, the two bowls were hollowed quite easily with a freshly sharpened gouge, taking very light cuts to maintain clean edges where they overlap. I’m indebted to Philip Streeting for giving me this piece of burr 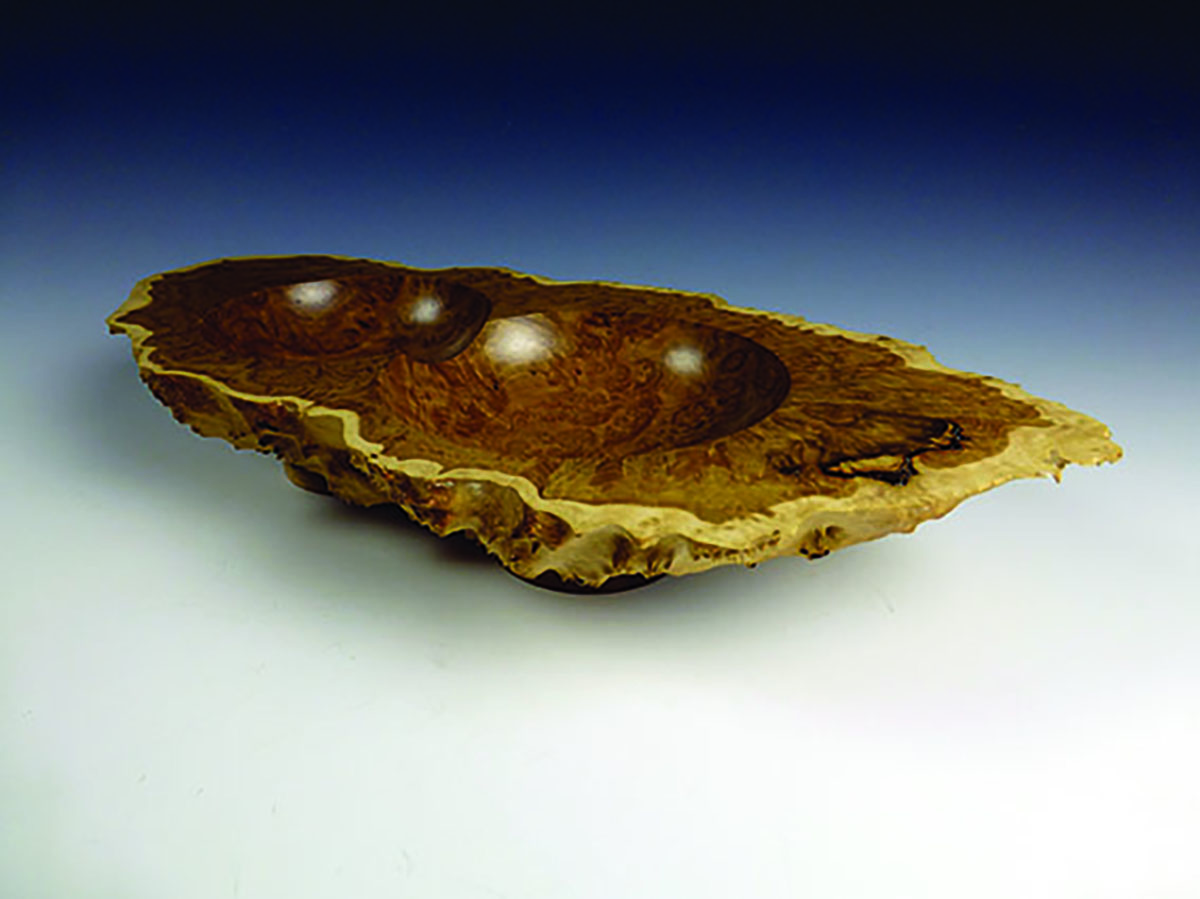 Handy Hints
1. When purchasing spalted wood, examine it carefully for regions that have ‘gone too far’. In a very real sense, spalting is just another name for rotting and it gradually destroys the fibre structure of the wood making it soft, porous and almost impossible to work to a good finish. If you can dig your fingernail into areas of the timber it is almost certainly going to cause you problems when you attempt to turn it
2. If your spalted timber is wet, put it somewhere where it will dry out fairly quickly, but not so fast that it might crack. Spalting only happens in wet timber. Drying it stops any further spalting
3. If your timber isn’t spalted enough then wrap it in plastic film to keep it moist and put it in a warm place to promote spalting. Be sure to check regularly to make sure it’s not gone too far. I confess I’ve never had much luck with this myself
4. There is argument about whether the fungal spores that remain in the timber are harmful or not. I can’t give a definitive answer but, about 15 years ago I ended up in hospital with pneumonia caused by fungi – they told me. It may be irrelevant, but I had been turning spalted beech, without a mask, about a fortnight before this diagnosis. Fortunately I recovered, although I still get short of breath very easily. Wear a good quality dust mask of at least PP2 standard
5. It may be worth experimenting with wood hardeners or soaking with cyanoacrylate or epoxy resin etc., to stabilise punky regions and make them easier to turn to a decent finish. There are no magic answers. You have to try it and see 6. Beech is the timber of choice for kitchenware, chopping boards, food bowls and the like, because it is known to be ‘food safe’. However, I’m pretty sure that does NOT extend to spalted beech. Do not use it for food contact, babies’ rattles or any similar situation where fungal spores may be ingested. It’s common sense, isn’t it?