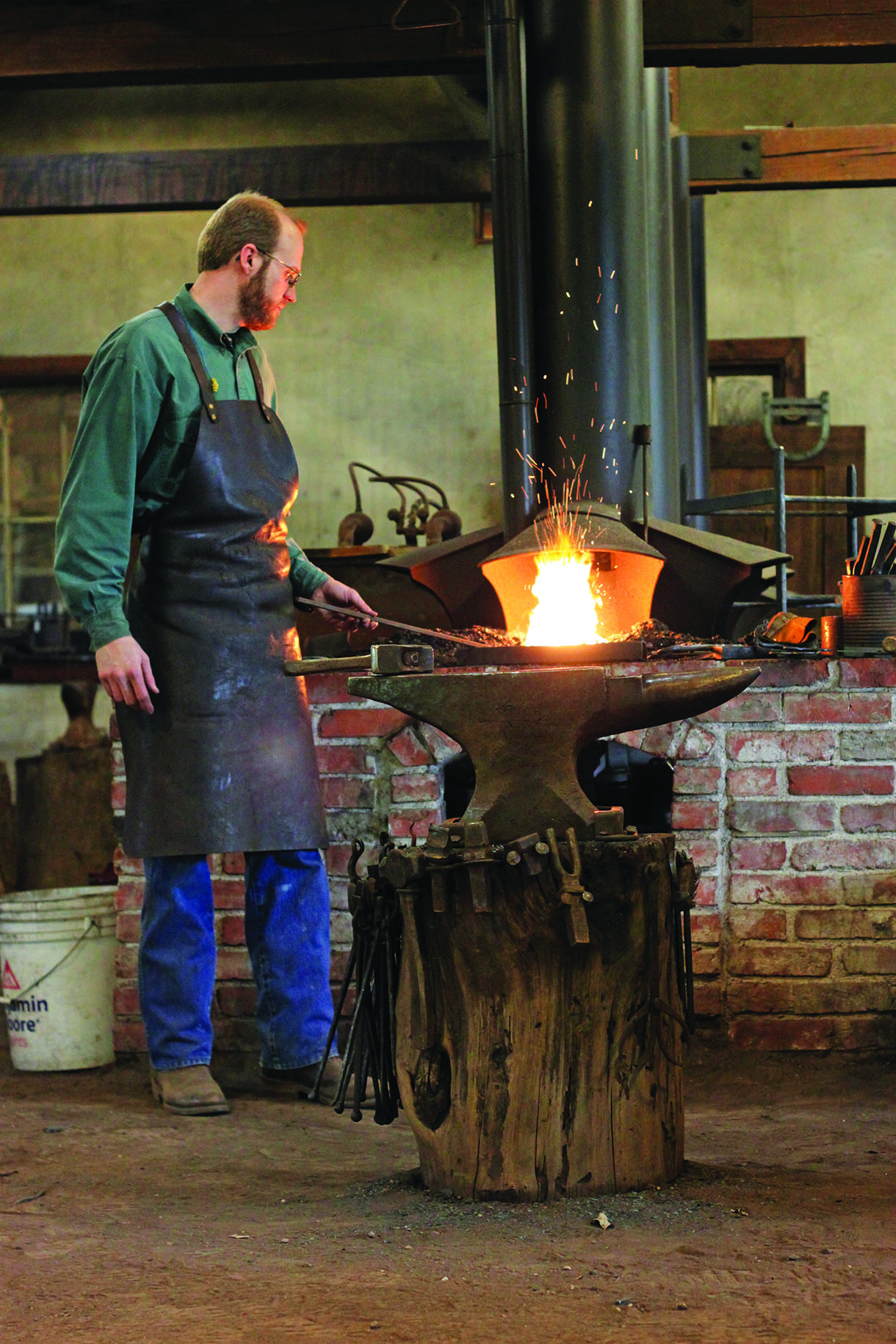 My last two articles for Furniture & Cabinetmaking magazine highlighted the construction of an oak writing desk in the woodworking shop at Homestead Heritage Community in Waco Texas (F&C 248), and took a peek into the life and work of furniture maker Jonathan Schwenessen (F&C 250). The other main character in the writing desk’s story is Caleb Nolen, resident blacksmith at the Homestead. He forged the hardware for the chest, and did an absolutely incredible job. 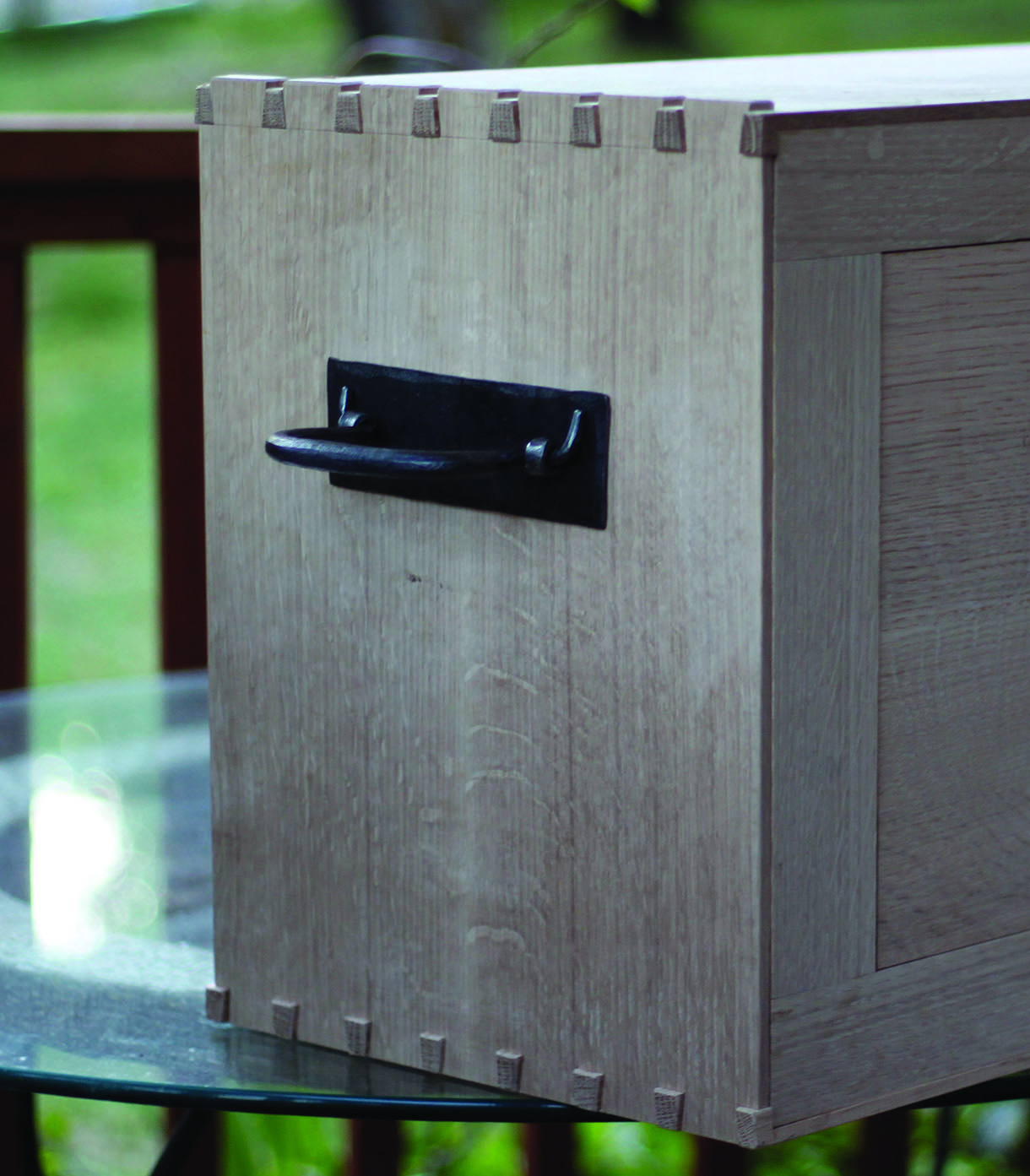 From apprentice to master blacksmith
Caleb Nolen has been a practising blacksmith at Homestead Heritage for 22 years. He began his apprenticeship as a young boy, and has been hard at work with a hammer at the anvil ever since. Jed, age 13, is currently apprenticing under him between his school studies. While I watched Caleb working on the hardware for the oak chest Jonathan and I were building, Jed was making an axe. Though he had to stand on a bucket to give his hammer a powerful enough swing, Jed certainly knew what he was doing, and that was very impressive to see. Like so many of the other youngsters I met at the Homestead, Jed was shockingly confident and mature. Another young fellow at the Homestead talked my ear off for an hour about how to properly shoot, skin and tan a rabbit hide, a task I’ve far from mastered at the age of 27, even though I’ve been raising rabbits since I was 10. I imagined my nephew, who’s the same age, in the woods with a gun, and that thought is absolutely terrifying. You see, the kids at Homestead are taught a myriad of skills at a young age, and entrusted with so much more than society at large ever would. Time and again at the Homestead, I saw children that had risen to that challenge, and are thriving as a result. It was incredibly awe-inspiring and encouraging. Spending time with these youngsters, I began to understand how craftsmen as young as Jonathan and Caleb could already be so accomplished. 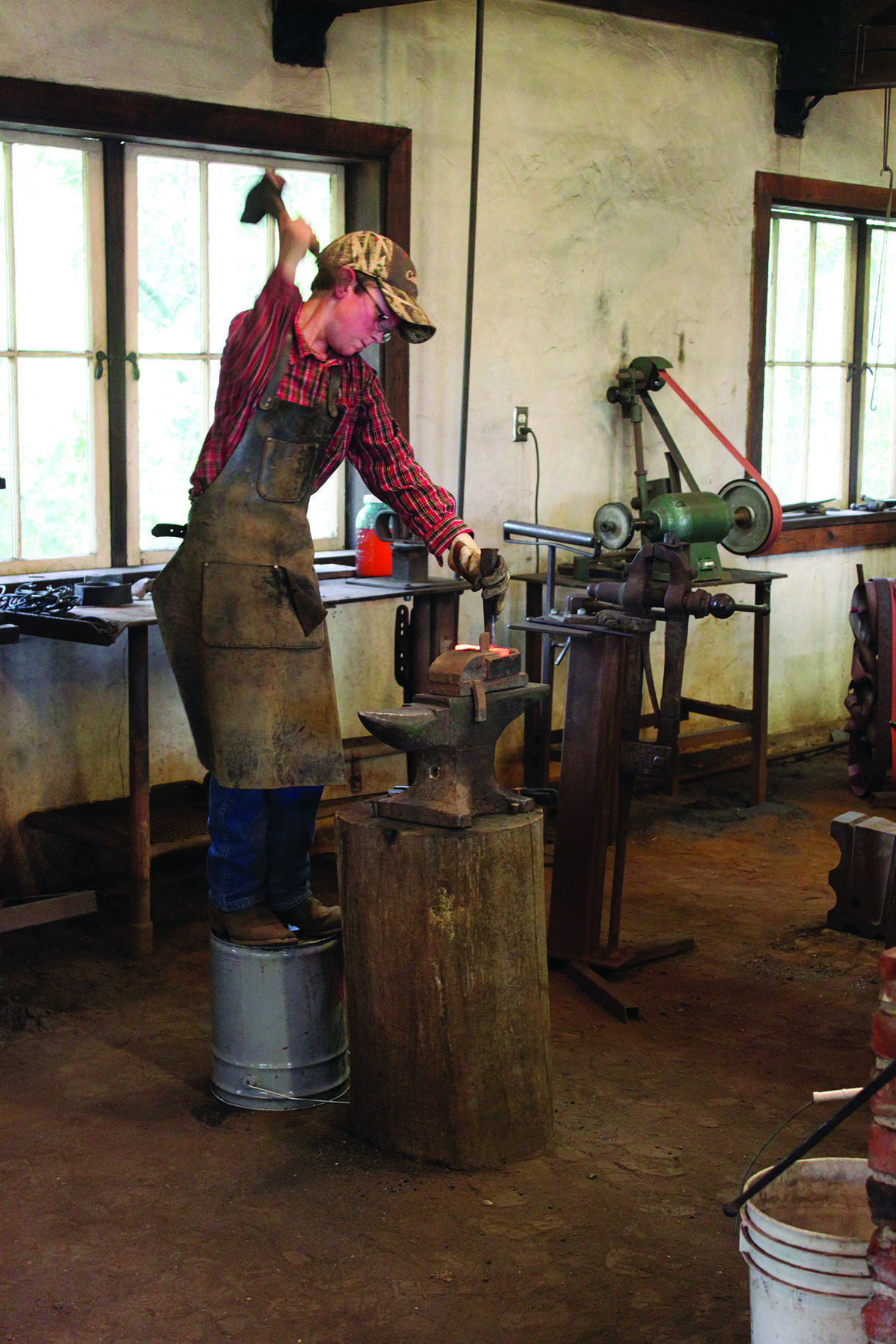 Forging tools
Caleb, formerly very well known for his decorative blacksmithing work has recently made the move into the forging of woodworking tools and accessories, making him a wonderful subject to interview for this series. Several years ago, he travelled to Sweden to study axe making at Gränsfors Bruk, and he was hooked. Using their techniques, he has finally perfected an axe he is excited to offer to the public. Like in the woodshop, the doors to Caleb’s forge are open to the public Monday–Saturday for tourists to come in and watch him work. This is another reason Caleb has decided to venture more into the tool making and woodworking accessories side of things rather than the sculptural work he was doing before. He wants to excite and inspire those who come into his shop, for people to leave with a greater desire to pursue blacksmithing. “Tools involve a lot more work in the forge and at the anvil. When people come into a blacksmithing shop, they want to see sparks and fire and hammering, not welding and grinding,” he says.
Caleb and I talked a lot about the steel and the processes he uses to make woodworking tools. Because he uses a coal forge, Caleb can only work on one tool at a time. The heat in a coal forge is so great that, if the metal is left in too long, it literally evaporates, so close attention needs to be paid to the piece in the forge. While a lot of it was WAY over my head, I could appreciate his descriptions of tools and steels with which I was already familiar. For example, he uses 01 tool steel for his travishers. Once tempered, 01 is a very hard tool steel, so while it is great for short, thick blades, it cannot be used on long blades such as swords or machetes, as its hardness makes it brittle when it is flexed. For hammers, he uses 1045 tool steel. The head of his axes are made with mild steel, and the tip is forge welded in. Caleb uses carbon steel blades salvaged from old farming equipment for the tips of his axes. It takes a wicked keen edge that outlasts anything else he’s tried. 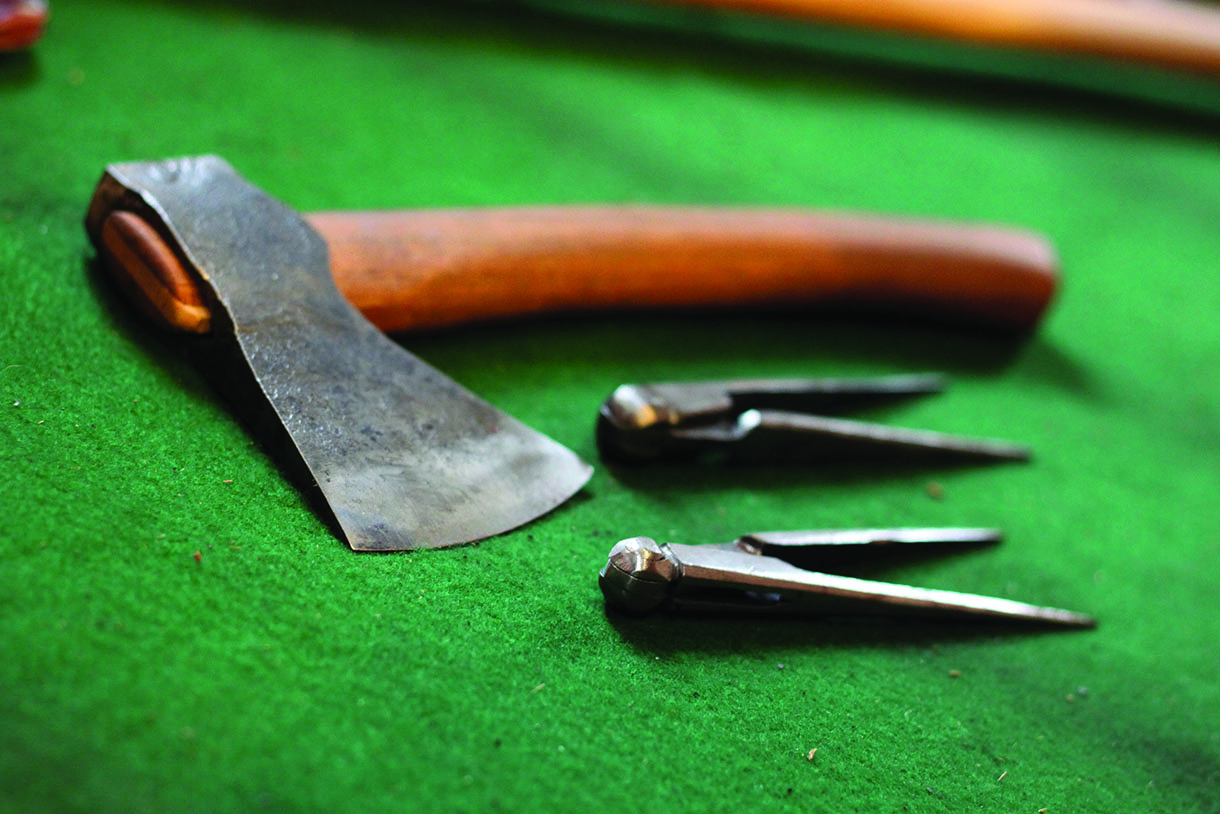 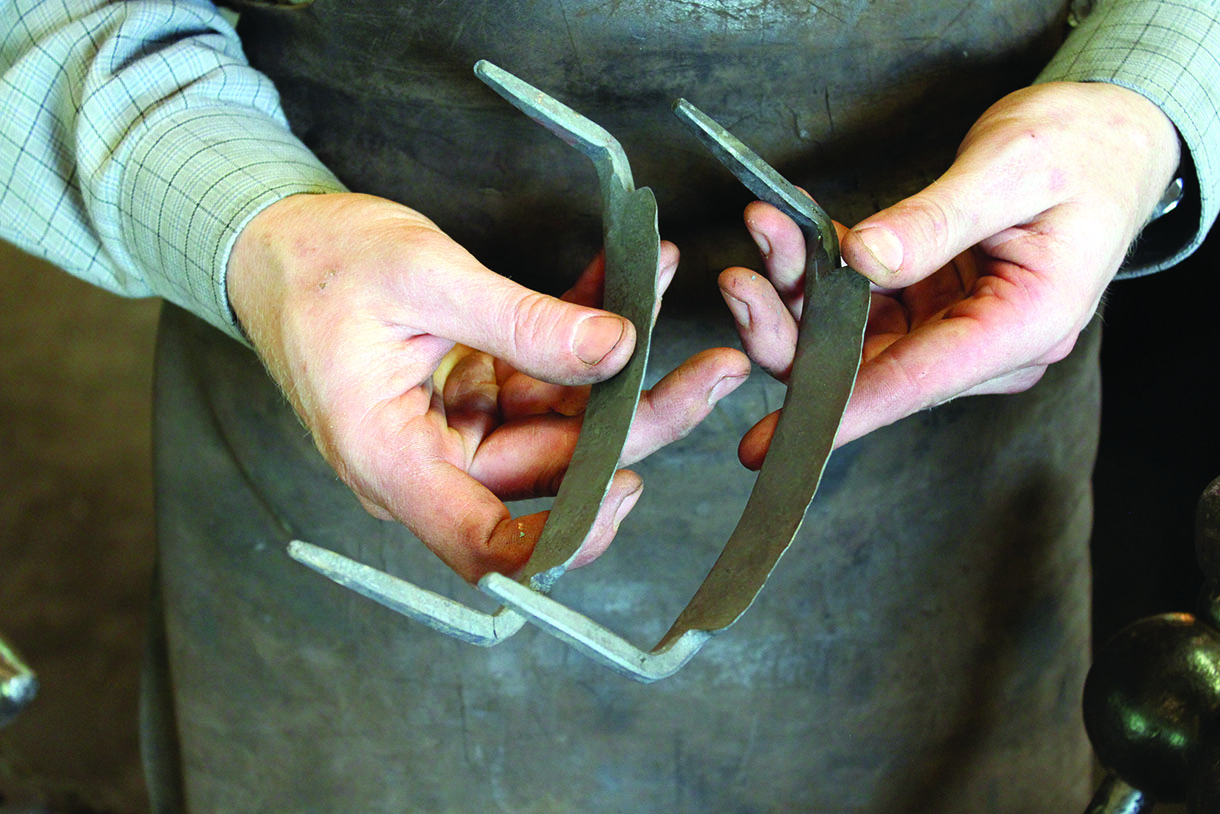 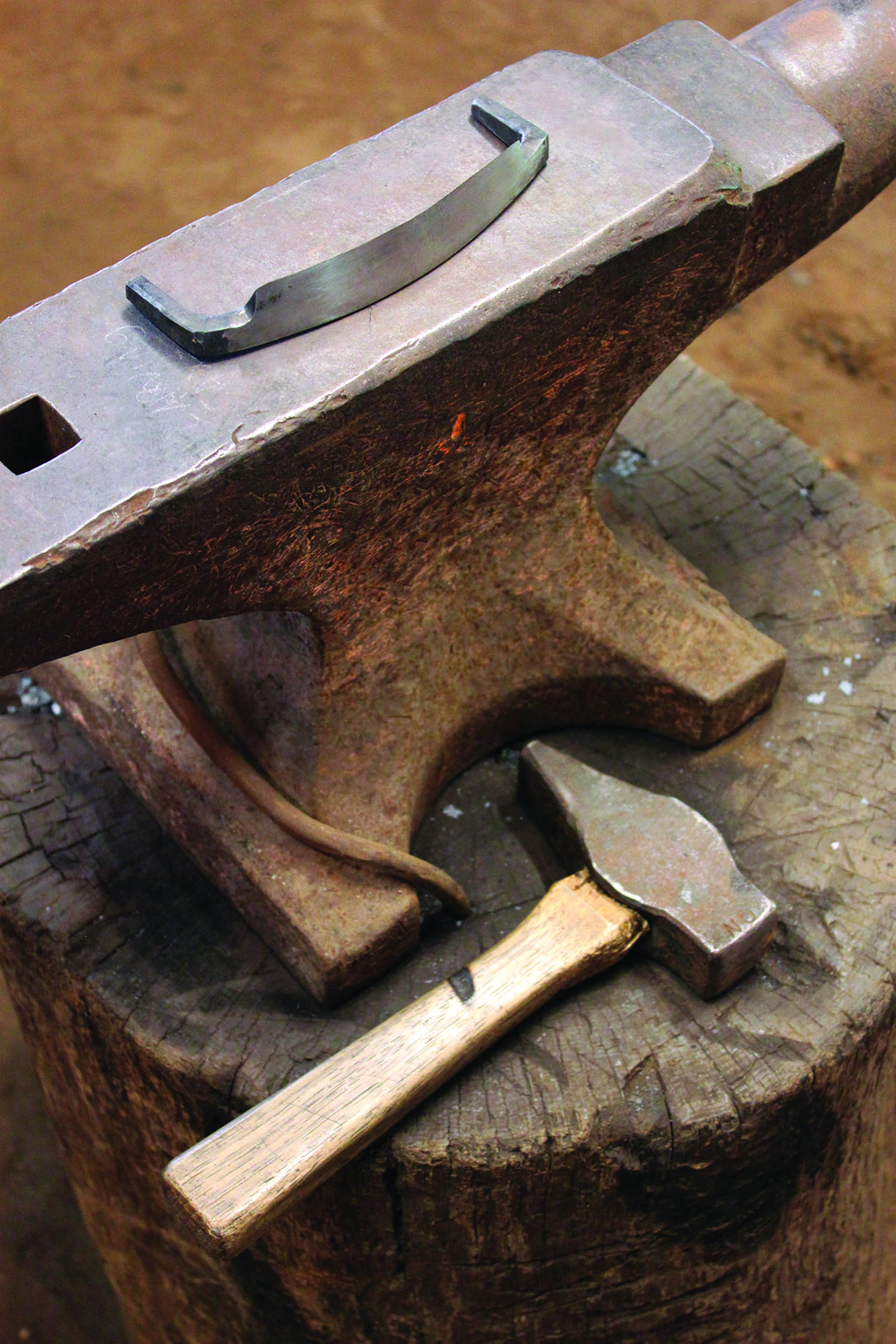 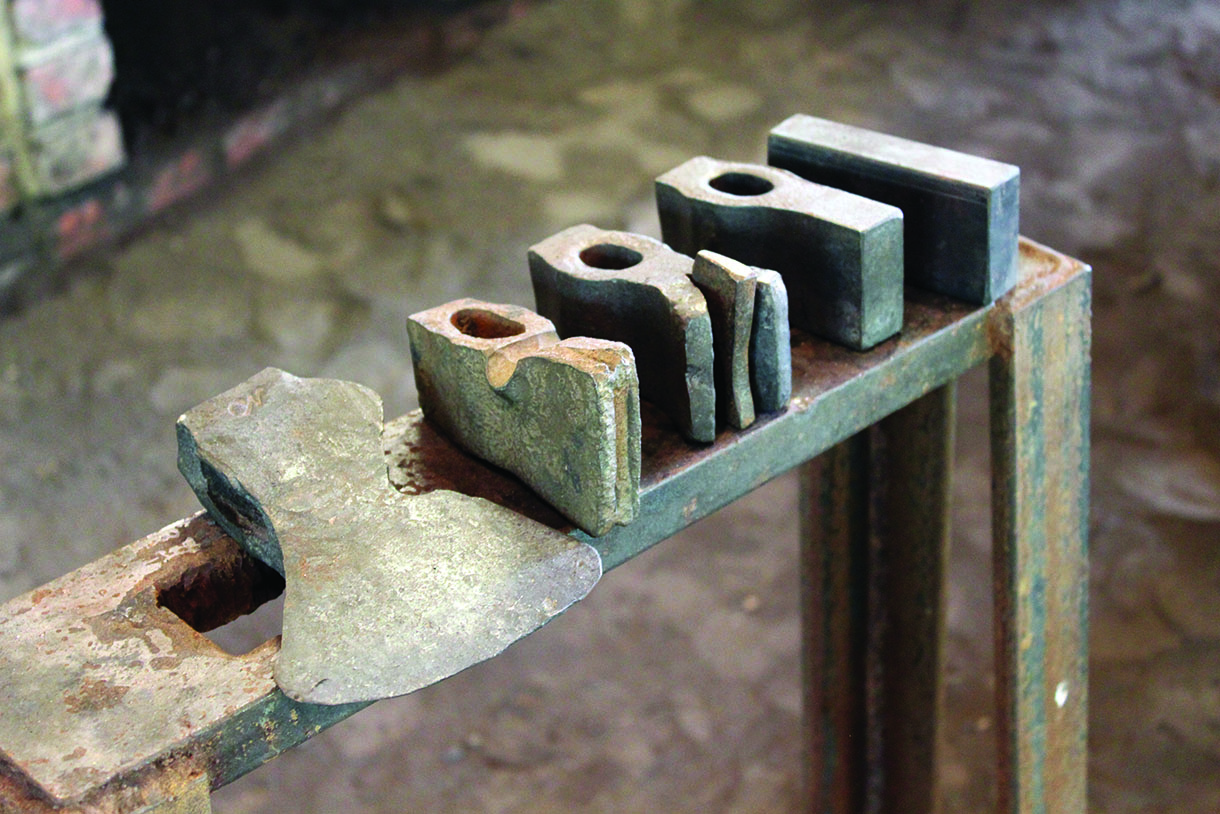 Making a crook knife
Since many of my favourite woodworkers have recently been particularly keen on spoon craft, I asked Caleb if he’d share with F&C’s readers his process for forging a crook knife, and he kindly obliged. For his carving knives, he uses 5160 steel (aka a piece of a vehicle spring) so it has more flexibility as a thin blade. He begins with 12mm round stock and heats it to a bright orange.
Caleb then takes the blade to the power hammer and flattens the stock. Between each heat in the forge, he uses a wire brush to clean off the mill scale, a byproduct of the oxidation caused by heating the metal (another common byproduct of oxidation is rust), to save himself some grinding work later. The less heats it takes to form the blade, the better, so Caleb tries to complete as many steps in the process as possible while the metal is hot. Drawing the metal out for the tang takes a lot of hammer work, so a great way to keep the heat up and to accomplish more in a single heat is to grab a partner. Caleb called his apprentice, Jed, over for this step. Caleb holds the workpiece and moves it over the anvil as he sees fit. He strikes first, and his apprentice strikes exactly where Caleb last struck. Watching two hammers at work on a single workpiece is a beautiful thing, almost like a well timed dance. Since it is also one of my favourite activities in the blacksmith shop at home, this was a real pleasure to see.
Once the tang is formed and the blade is flat, Caleb uses one last heat and the horn of his anvil to define and refine the final shape of the hook knife. Using a ‘cutoff hardy’ (basically a chisel which fits down into the square hole in the anvil) a few taps separates the completed blade and tang from the stock piece.
Once the forging is complete, the blade will get a rough grind and polish, before going through the heat treating process. After a final sharpen and polish, the blade will go to the wood shop where Jonathan
and his crew will fashion a wooden handle. The knife will then be tested and sold. 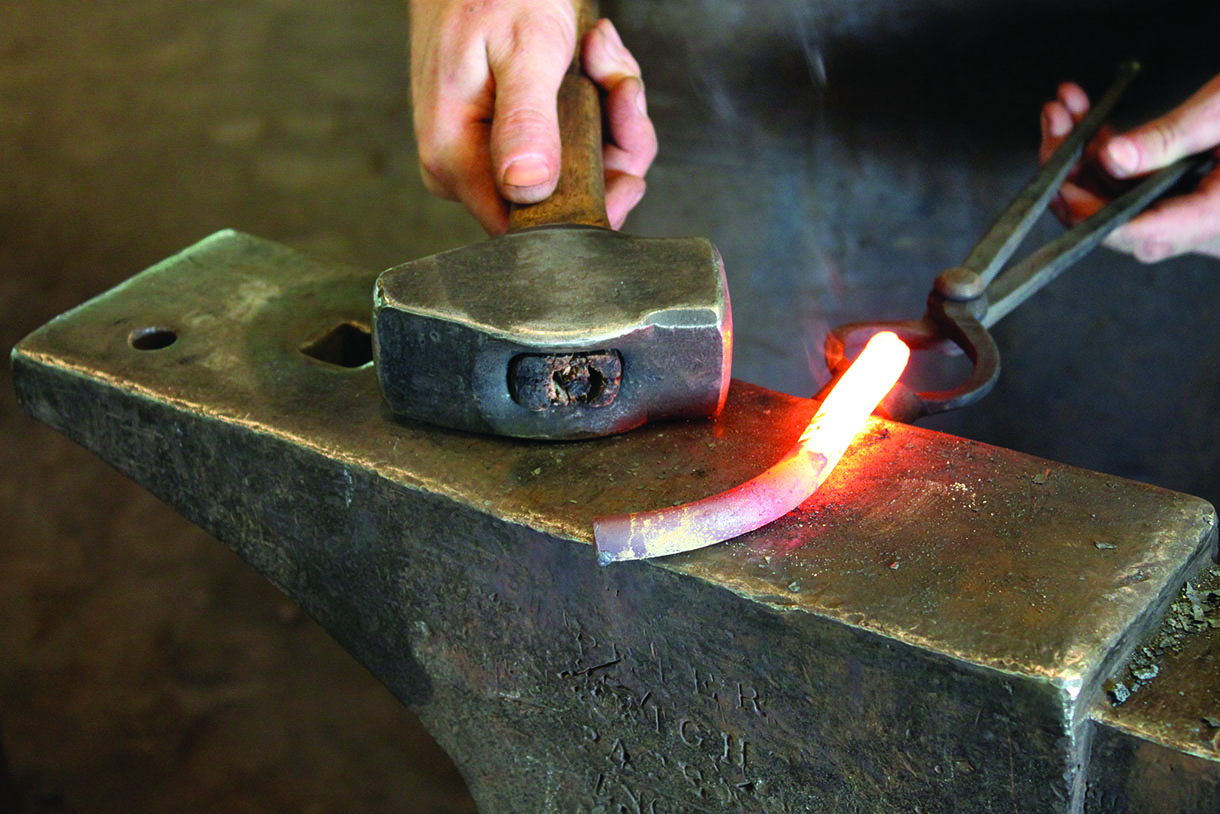 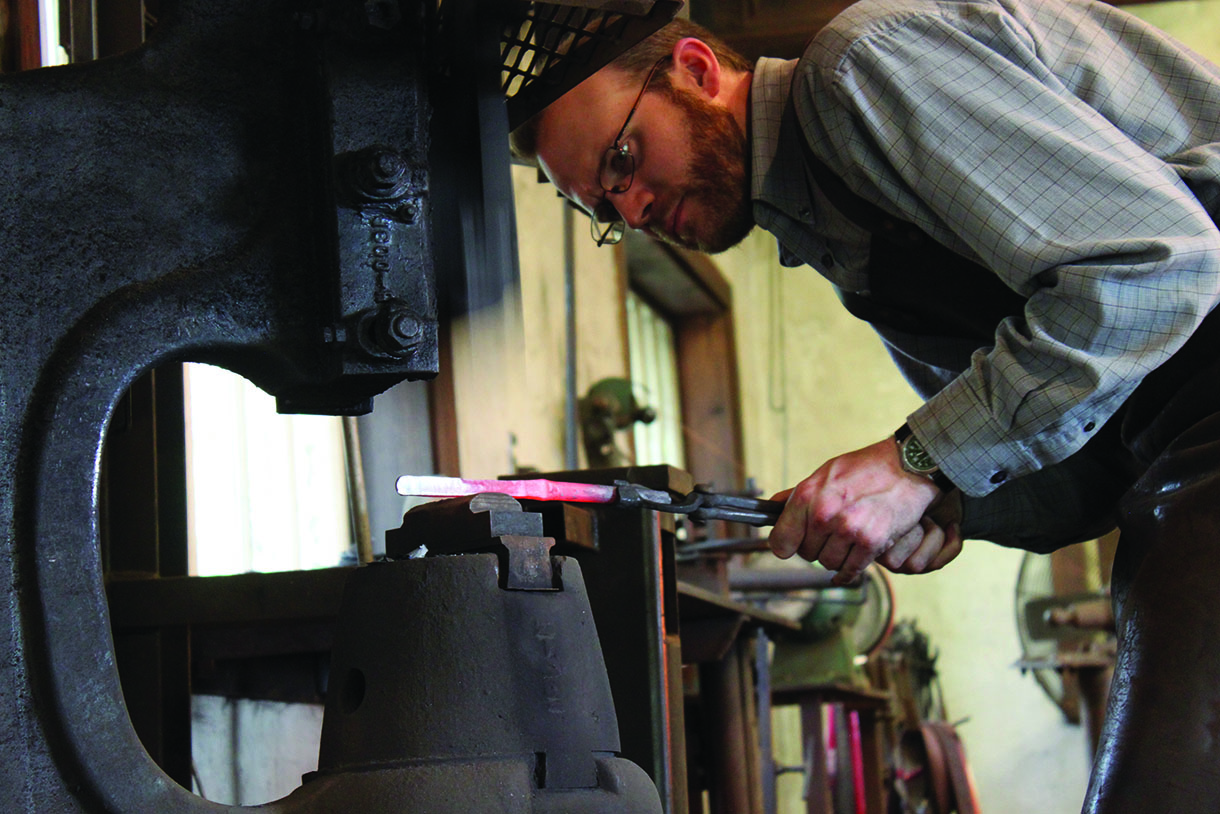 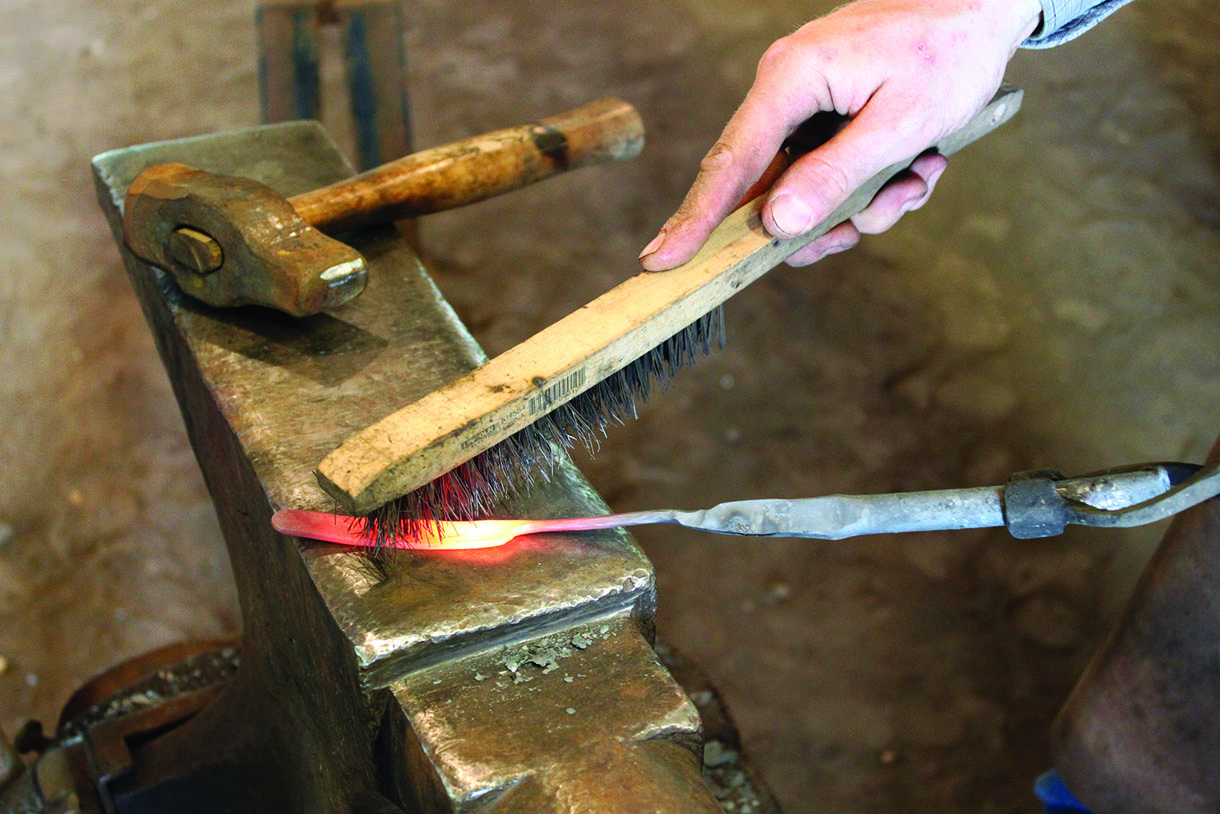 Drawing out the tang 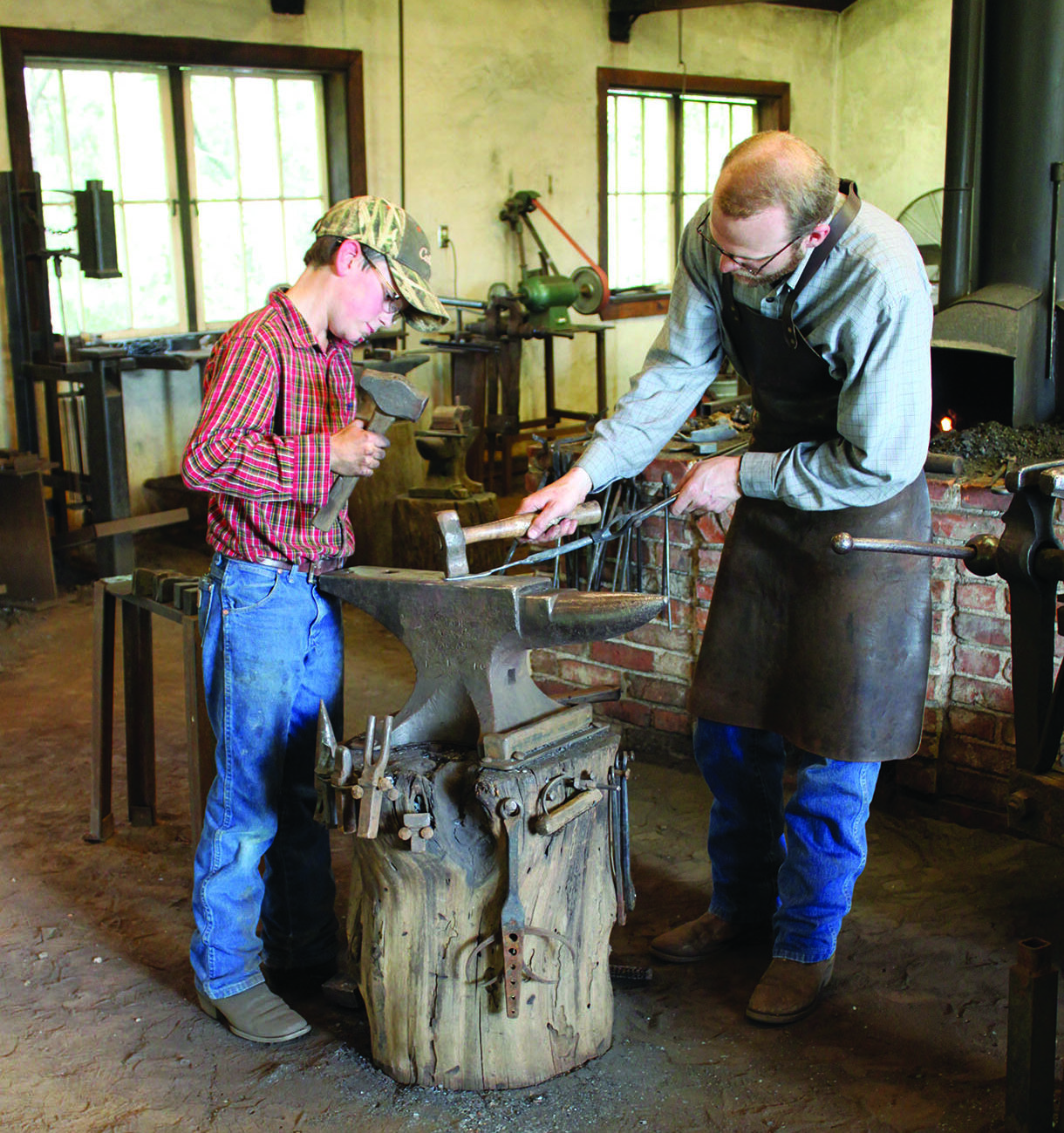 Cleaning off the slag 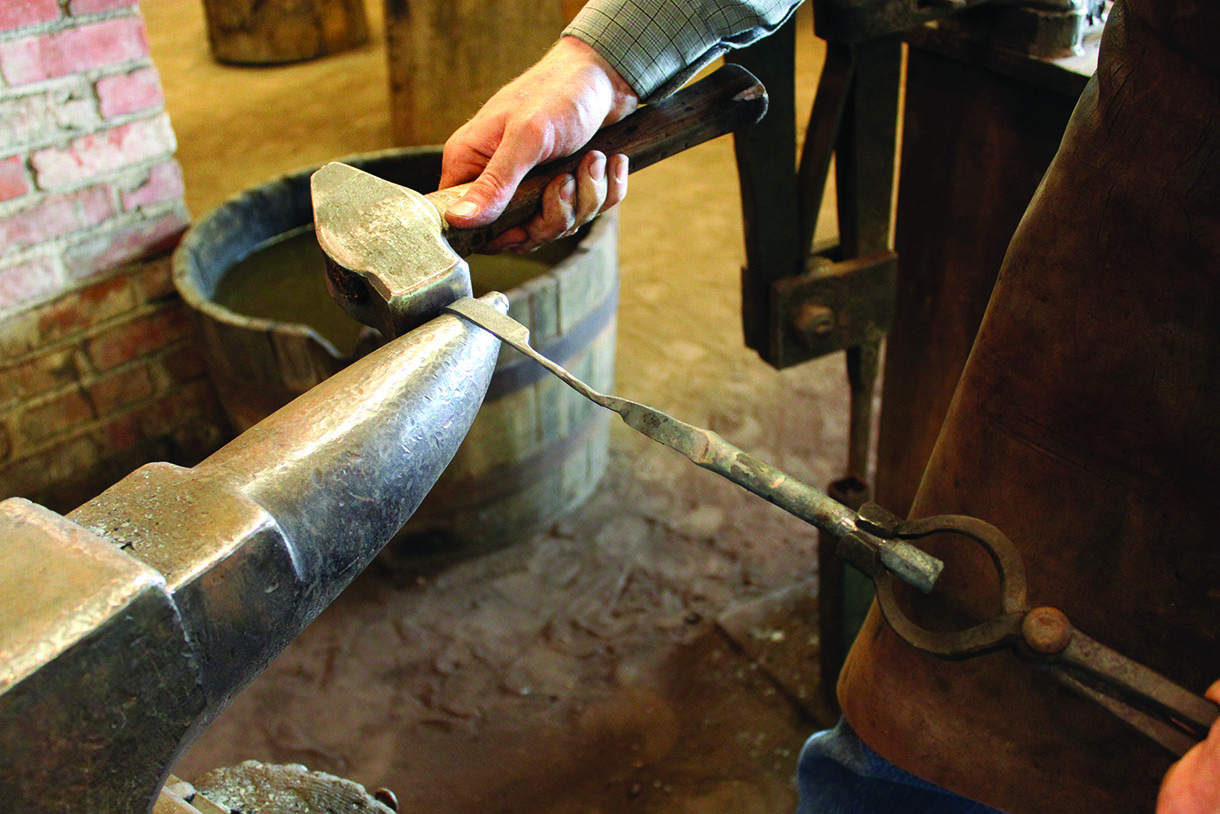 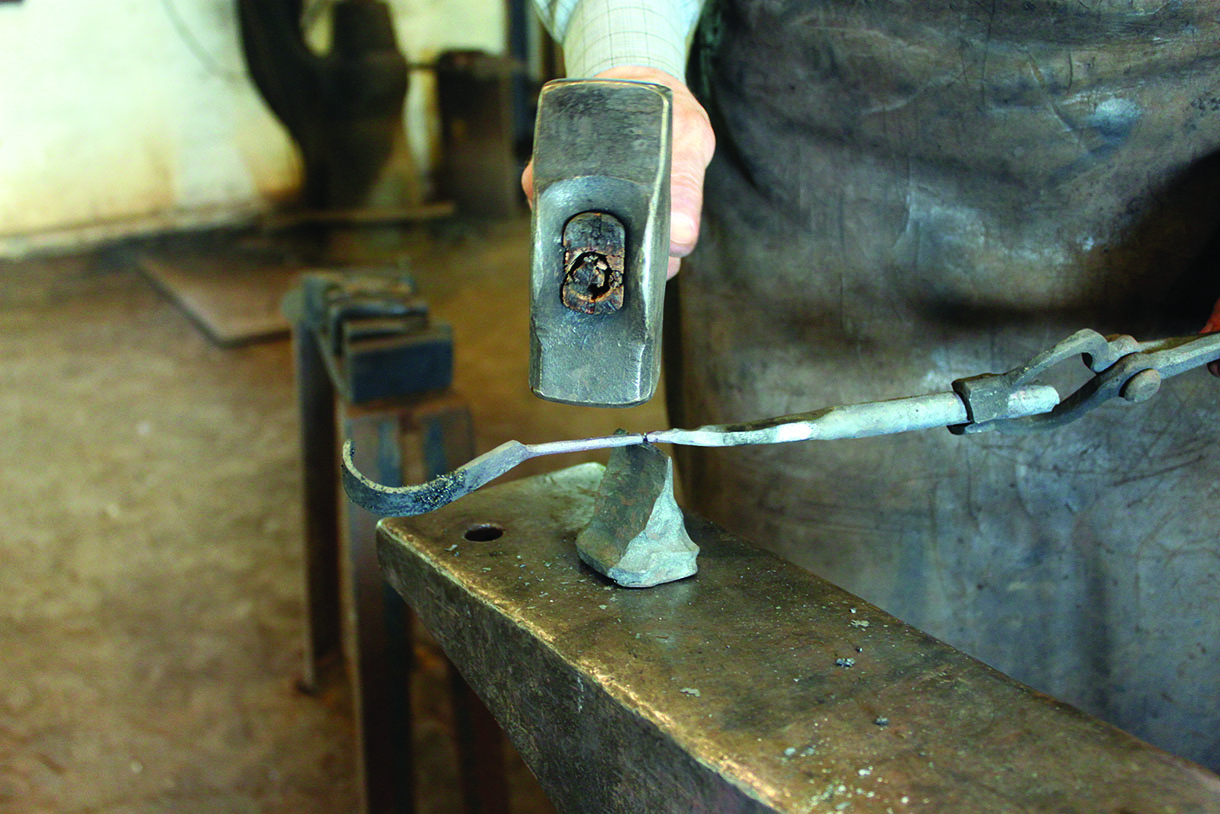