Do I need more Tools?:
Peter Benson debates whether you need more tools, and if so, which ones? 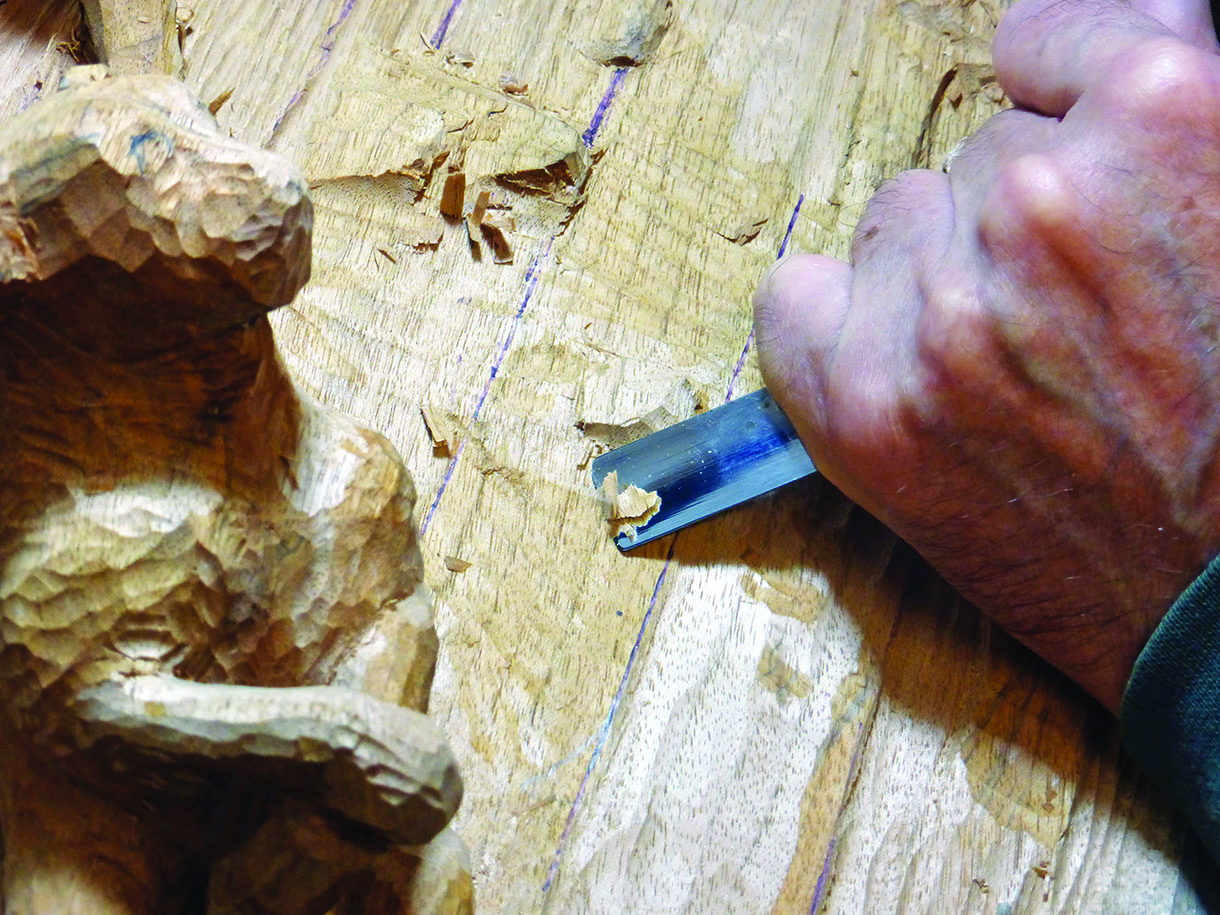 Peter Benson debates whether you need more tools, and if so, which ones?

This is a question most new carvers will ask at some time or other – in fact, so will most carvers come to that. Although most projects can usually be completed with around six to 10 different tools, the more projects you attempt, then the more tools you will need in your toolbox. Or does it? If it does just what tools exactly are needed?
I hope the next few articles will help carvers understand what the basic tools in the toolbox are capable of producing and, therefore, what additional tools might be required without doubling up on tools that actually do the same things.
I hope to show what each tool in my suggested starter set is capable of doing in order to get the maximum use out of it. We tend to think that each tool has a specific function and we often don’t attempt to experiment using it in different ways, or even sharpening it in a different way. 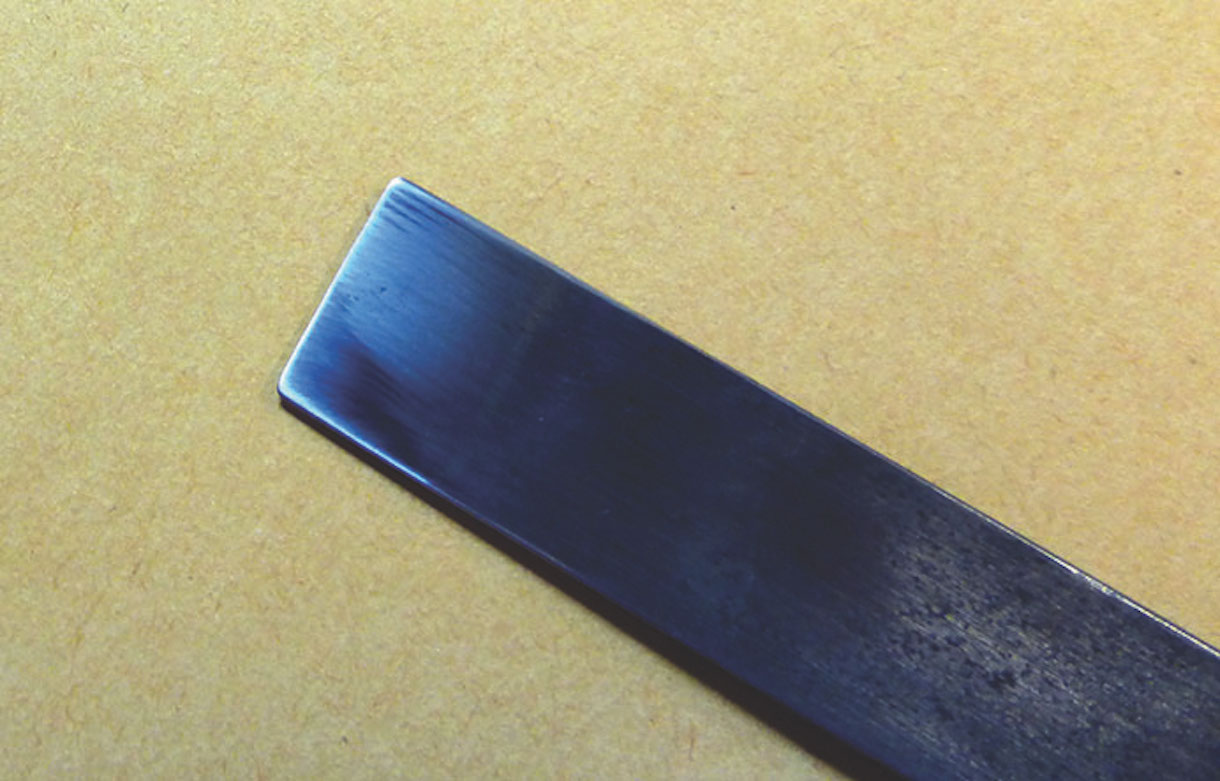 A No.3 gouge with the corners nicely squared. A minute amount of rounding is better than the corner coming to a point 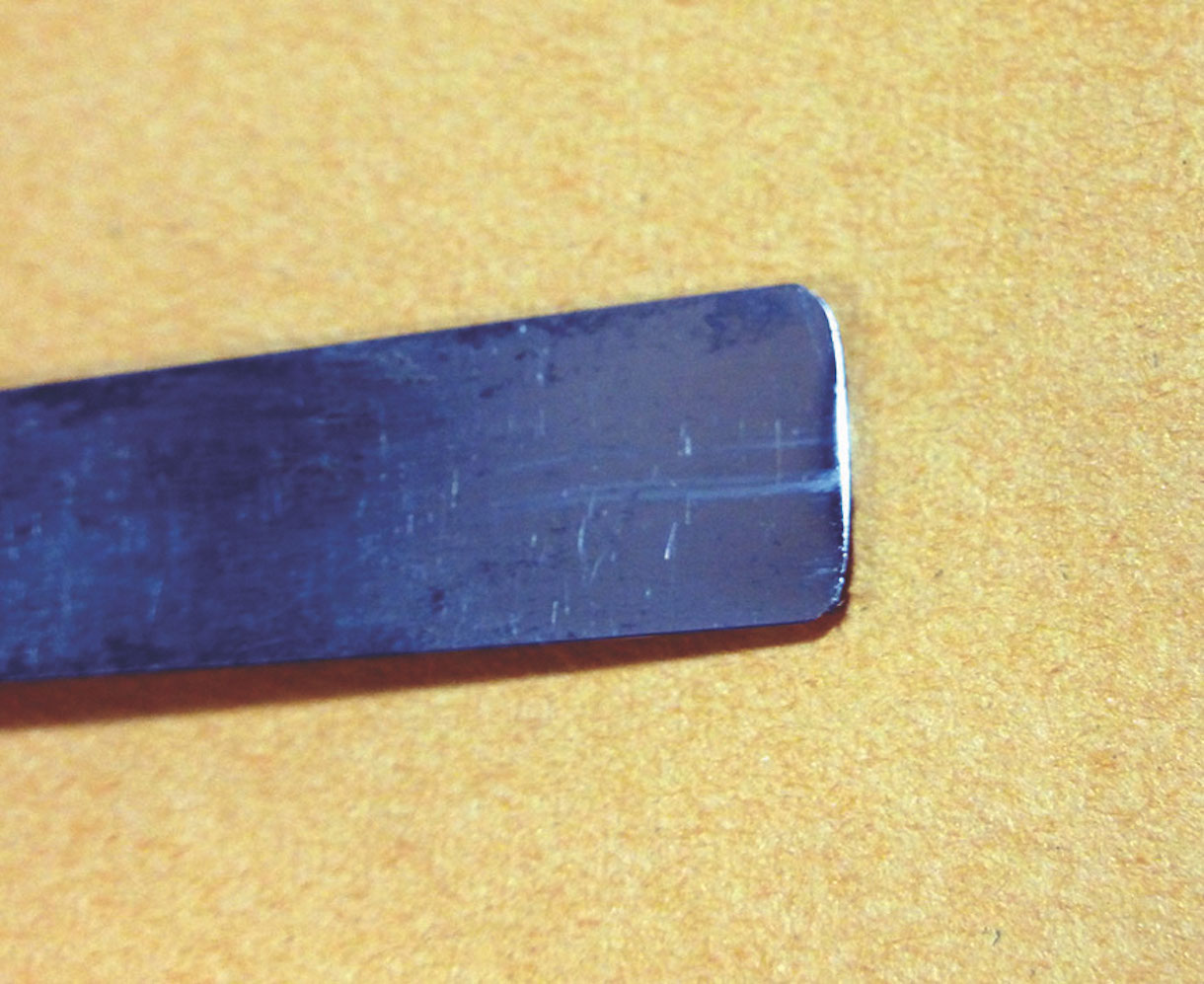 A badly sharpened gouge with the corners rounded, limiting the use of the tool 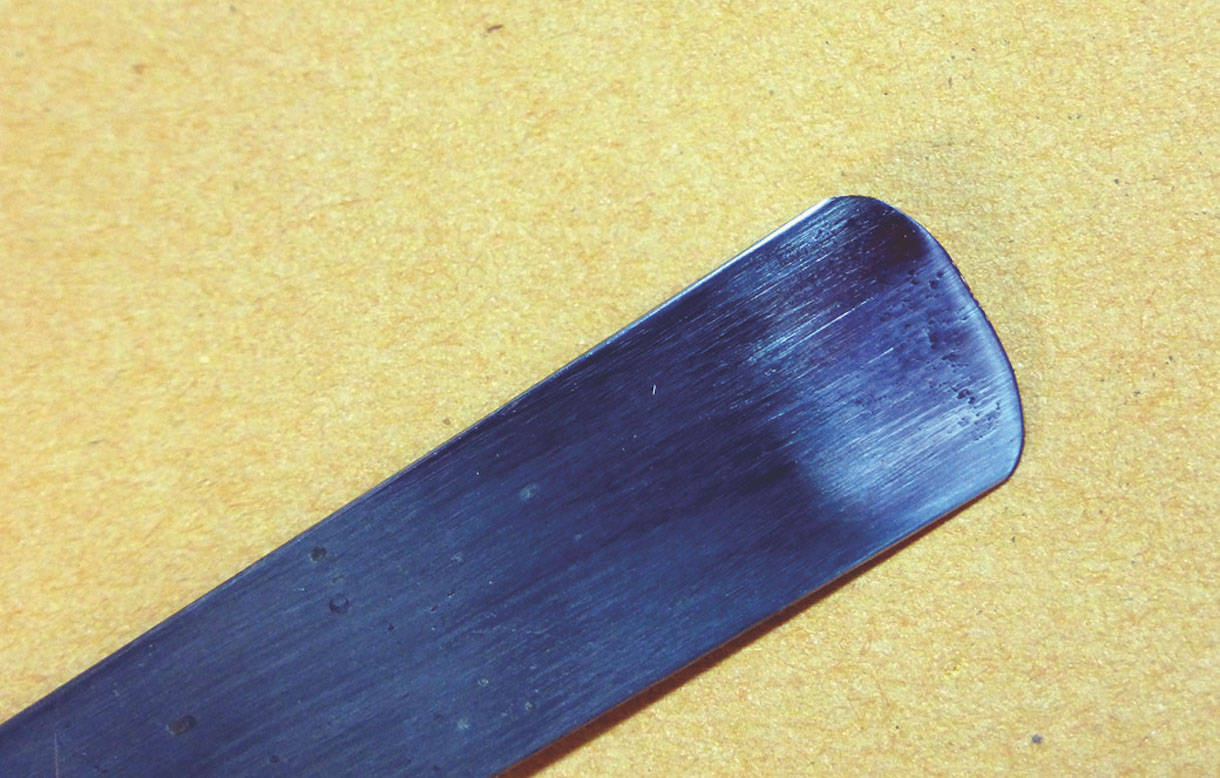 The same tool with a gentle bull nosing – ideal for letter carving or hair. Note the curve running along the whole cutting edge 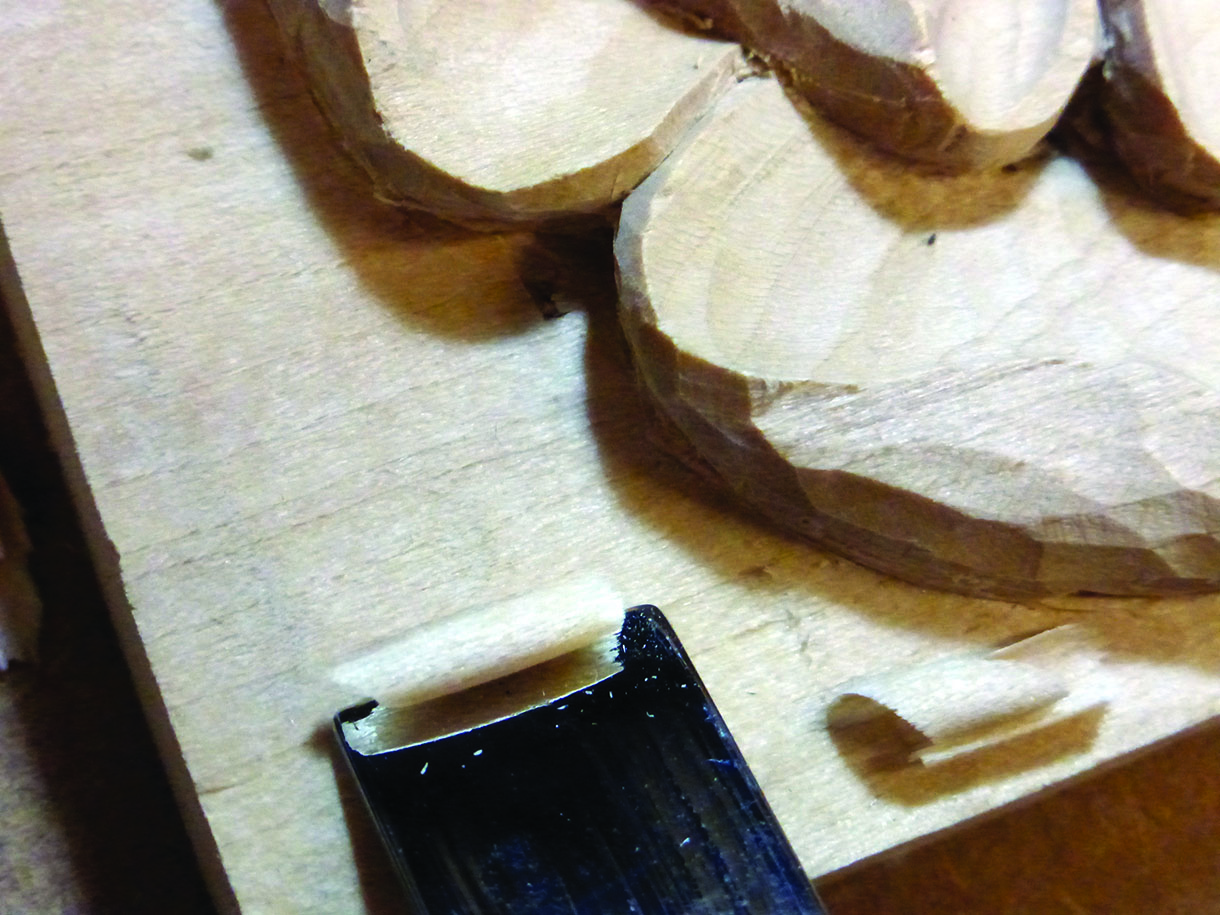 Using a No.3 gouge for removing waste on a relief carving. Note that the tool is not cutting at each end of the cutting edge, thus leaving no damage to the surface

Common tools
First of all, let us deal with probably the most common tool – a No.3 sweep. This is the shallowest of the most used tools and may even be called a No.2 sweep by at least one manufacturer. The No.3 sweep will usually be used for basic shaping, both inside and outside of any curves. I would also recommend that this should be used for producing a flat background. I have seen many carvers trying to get a flat surface using a No.1 flat chisel. Obviously the corners of this are going to bury themselves into the wood with every cut, unless some severe modifications are made to the tool. A No.3 sweep has the corners lifted enough to skim over the surface and the very slight ripple effect it causes can easily be dealt with later. As long as there is no rounding of the ends of the cutting edge this tool is very useful for undercutting, and removing waste from corners.
Many of the tools I have seen have ended up with rounded corners as a result of bad sharpening and honing. This does limit the use of the tool considerably, although deliberate and careful ‘bull nosing’, giving the cutting edge a slight curve along its length can give it another range of uses altogether. Many experienced carvers will have both types of No.3 gouges in their toolboxes. What ‘bull nosing’ will do is make it possible and very easy to slide the tool sideways along the cutting edge producing a very smooth and even curve, making it useful for letter carving and architectural relief work and hair.
Finally, most novice carvers will only use a gouge with the bevel underneath as this is the most common way and will always tend to lift the tool out of the cut. Most basic tools can also be used with the bevel uppermost to give a neat curve where needed. This does need a little practice as the tool will tend to dive down into the wood, but once mastered you will find the tool has more or less doubled its functions. 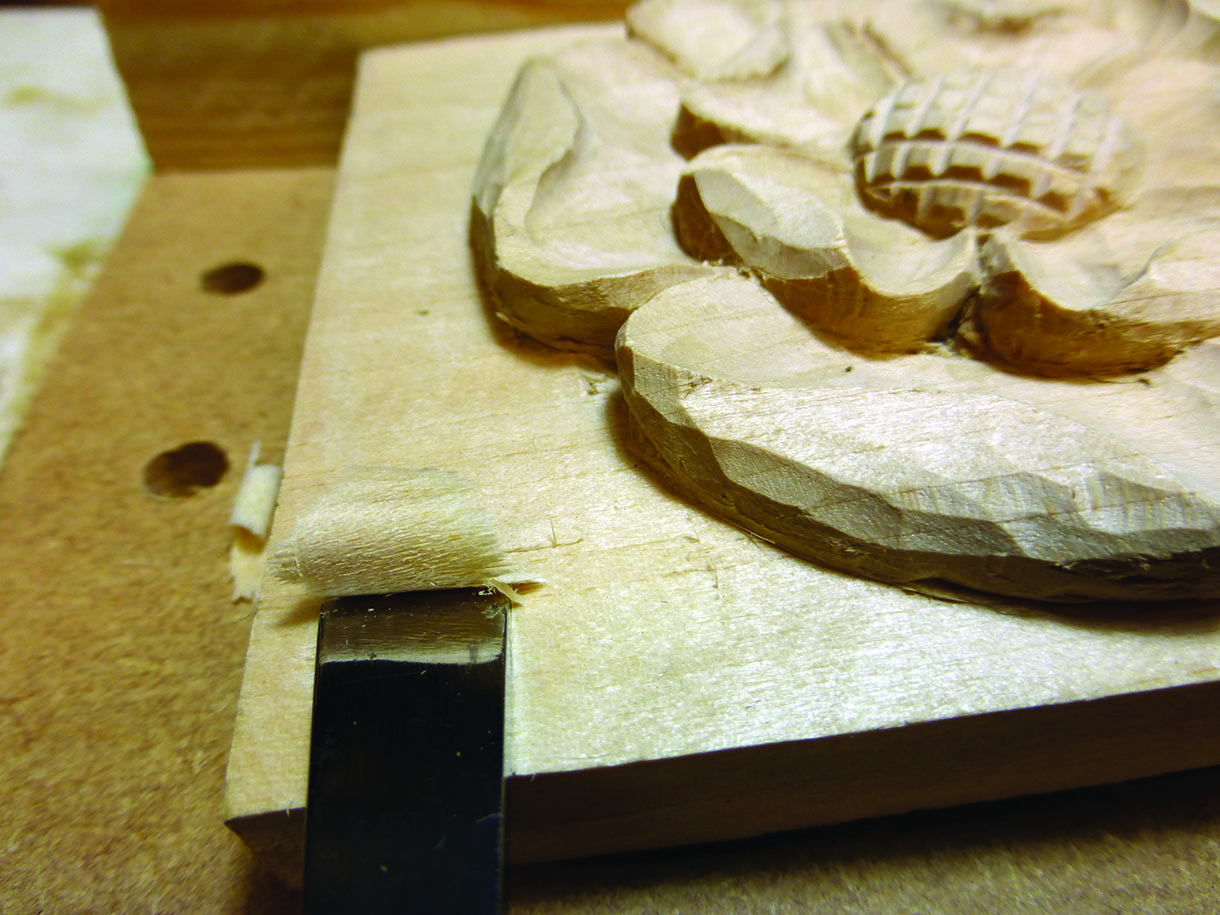 Trying to use a No.1 flat chisel to remove waste. Note the damage at each end of the cutting edge 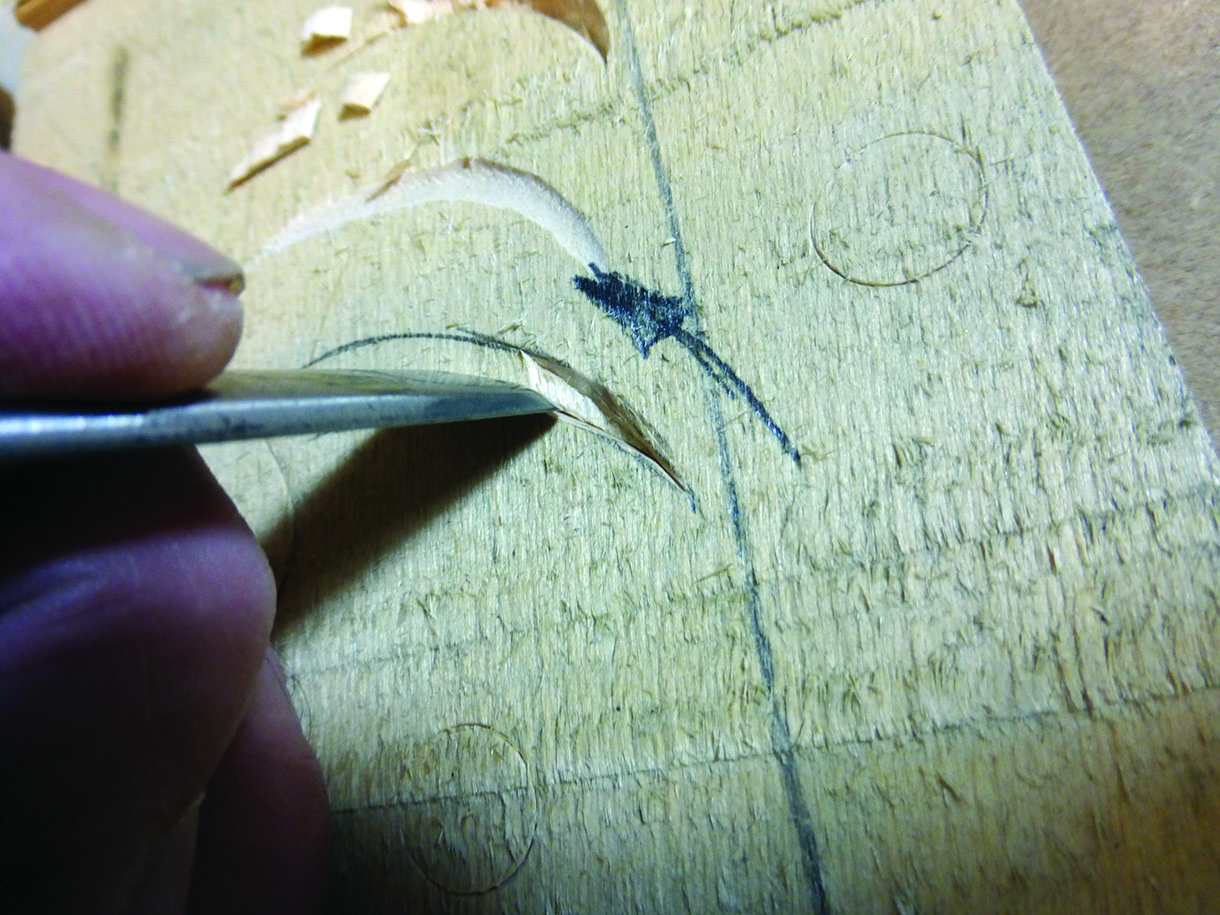 Practising the use of the bull nosed No.3 gouge on a piece of waste with a slicing motion side to side